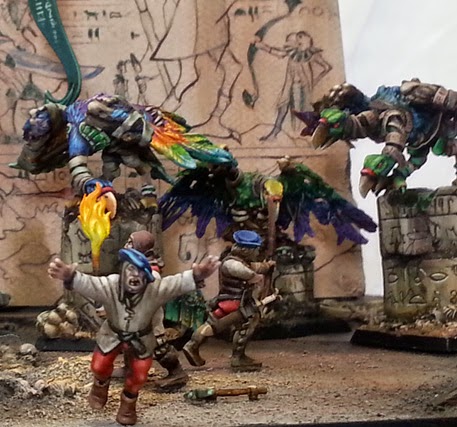 Let's look at at the top level of the display board today!

For as many technical challenges lurked below, this was even more tricky.

To go along with the army story (this is, Empire and Bretonnians constantly raiding Tomb Cities), I needed to have the inner Tomb, and the desert landscape above.

It also had to be removable for transport and other considerations.

There had to be room for my scratch sculpted constructs, my scratch built Screaming Skull catapult, the main light source over the Casket of Souls, and the scene to the right... 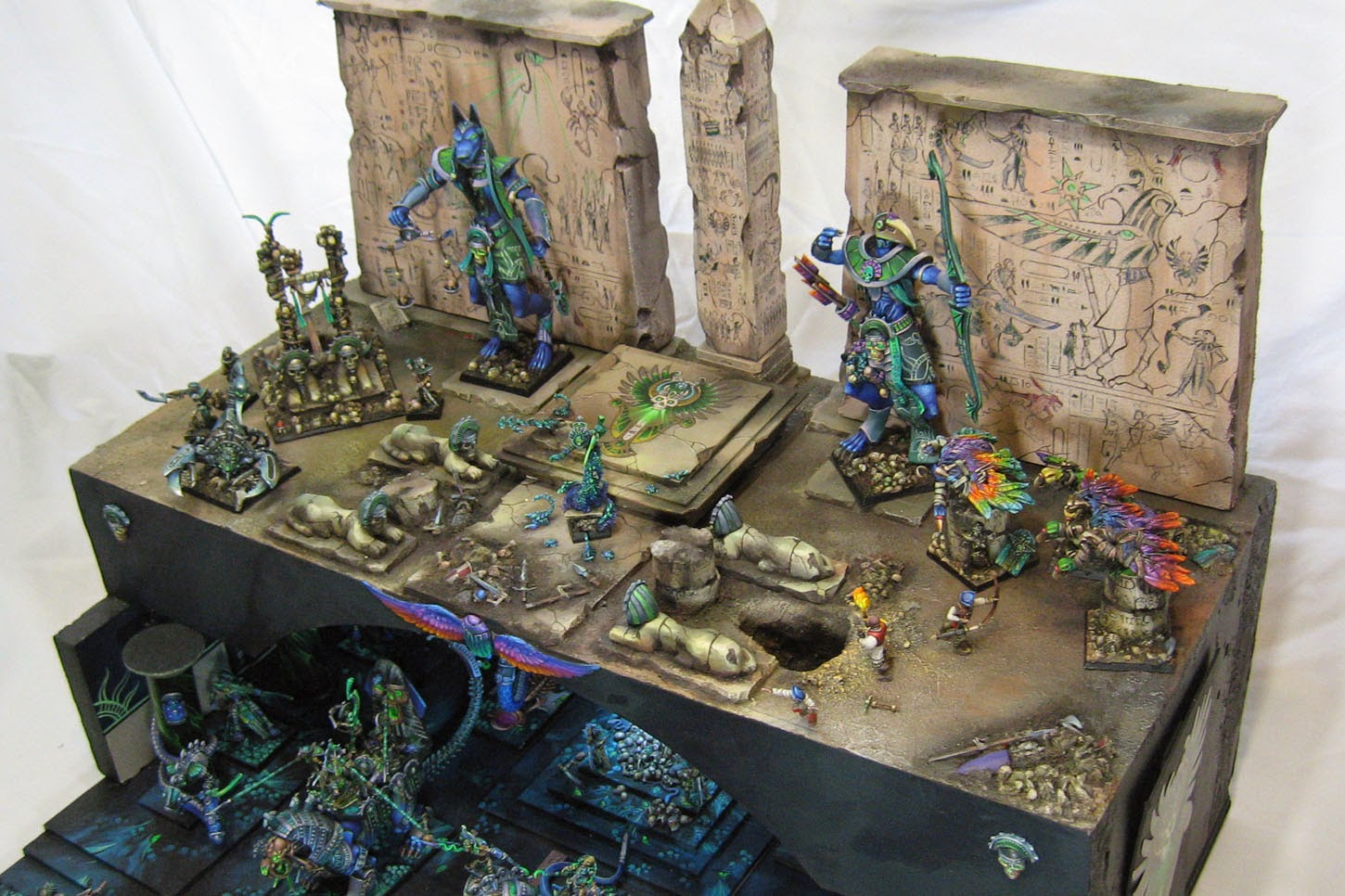 I sculpted the sphinxes to show the difference between the 'regular' statues and the ones that had come to life, like the Heirotitan and the Colossus. 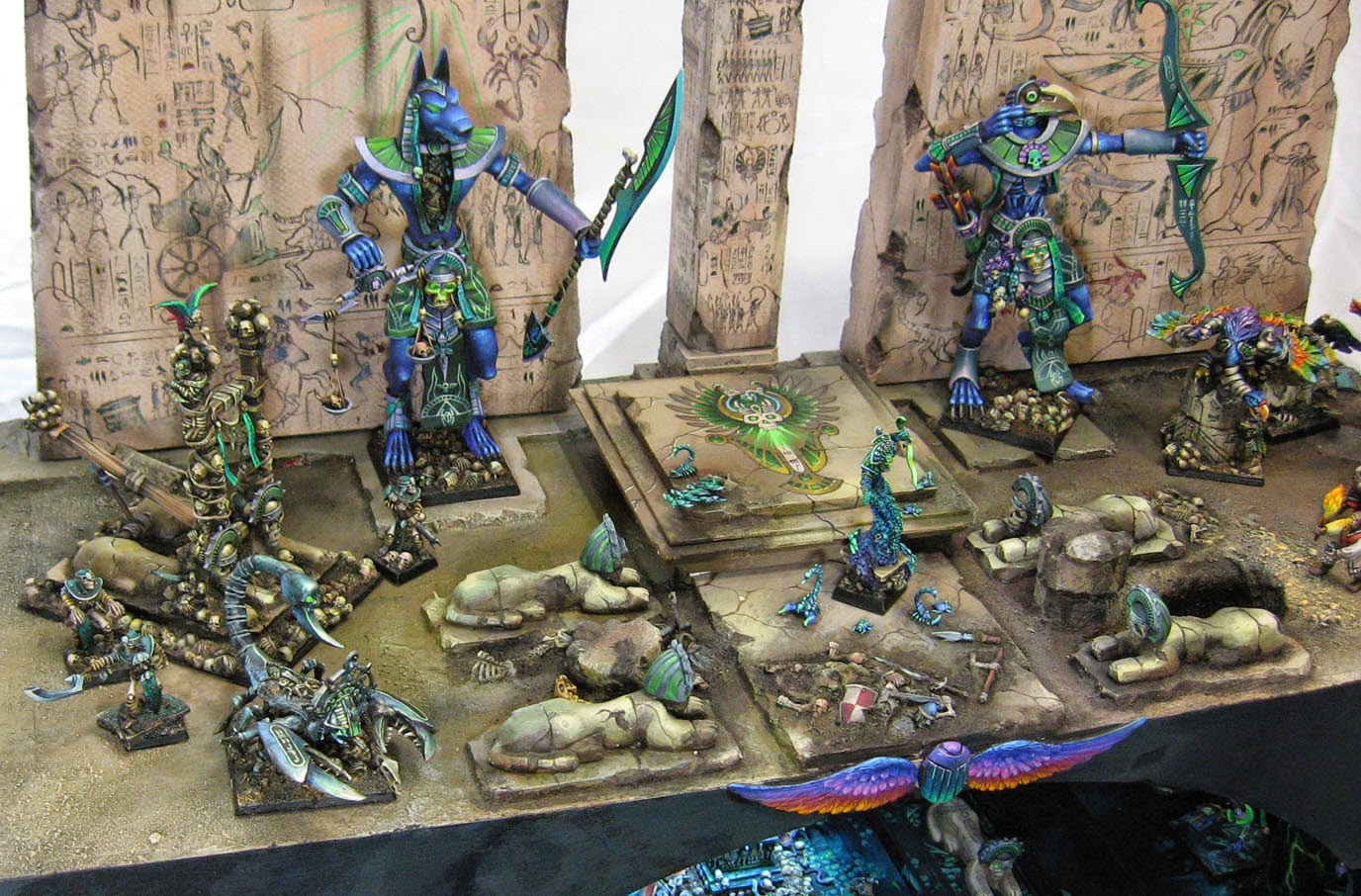 Prince Apophas would stand watch over the 'altar', which covered the massive lighting apparatus. 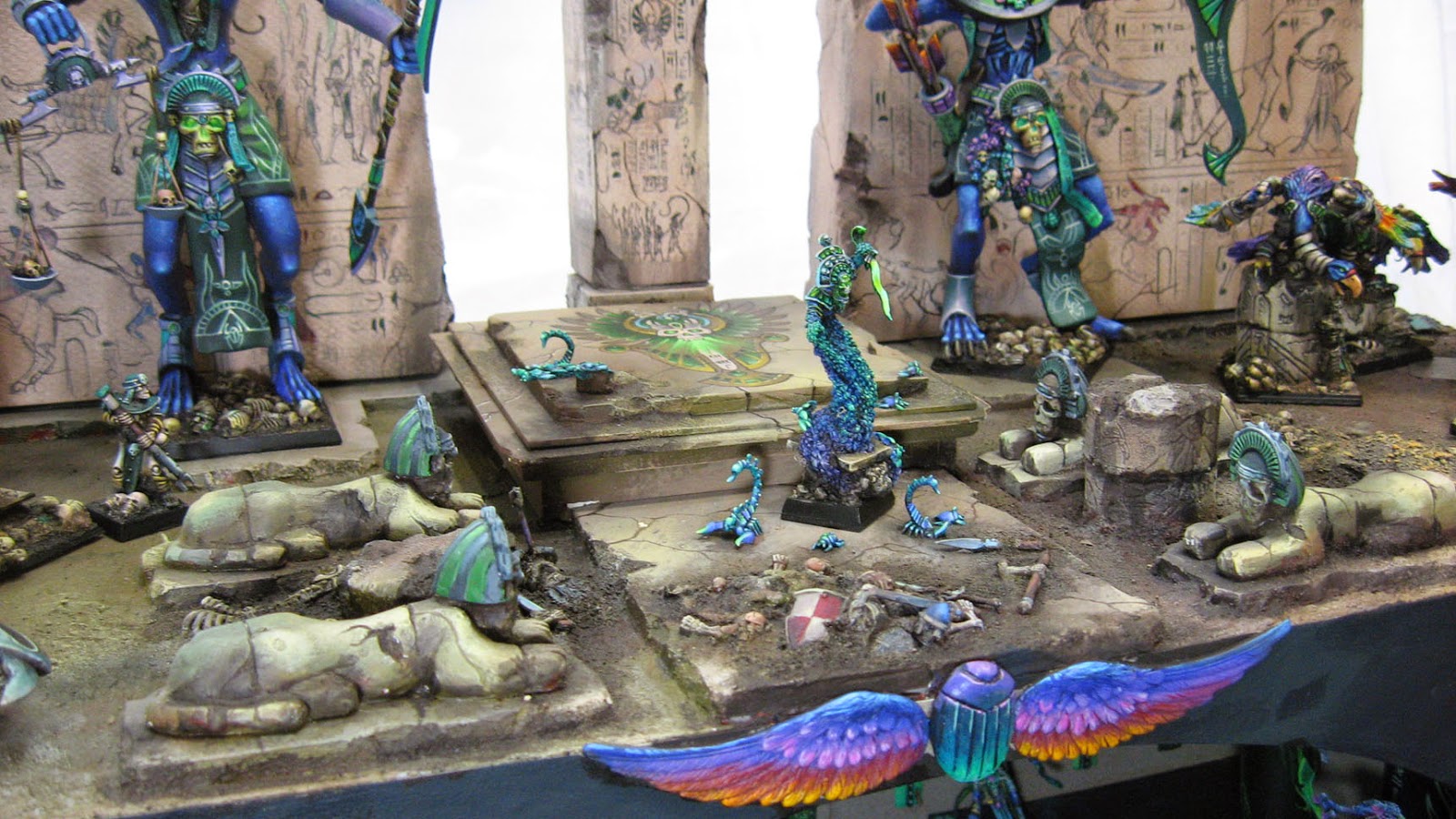 The Heirotitan!  I have a number of posts on him, such as the sculpting process: 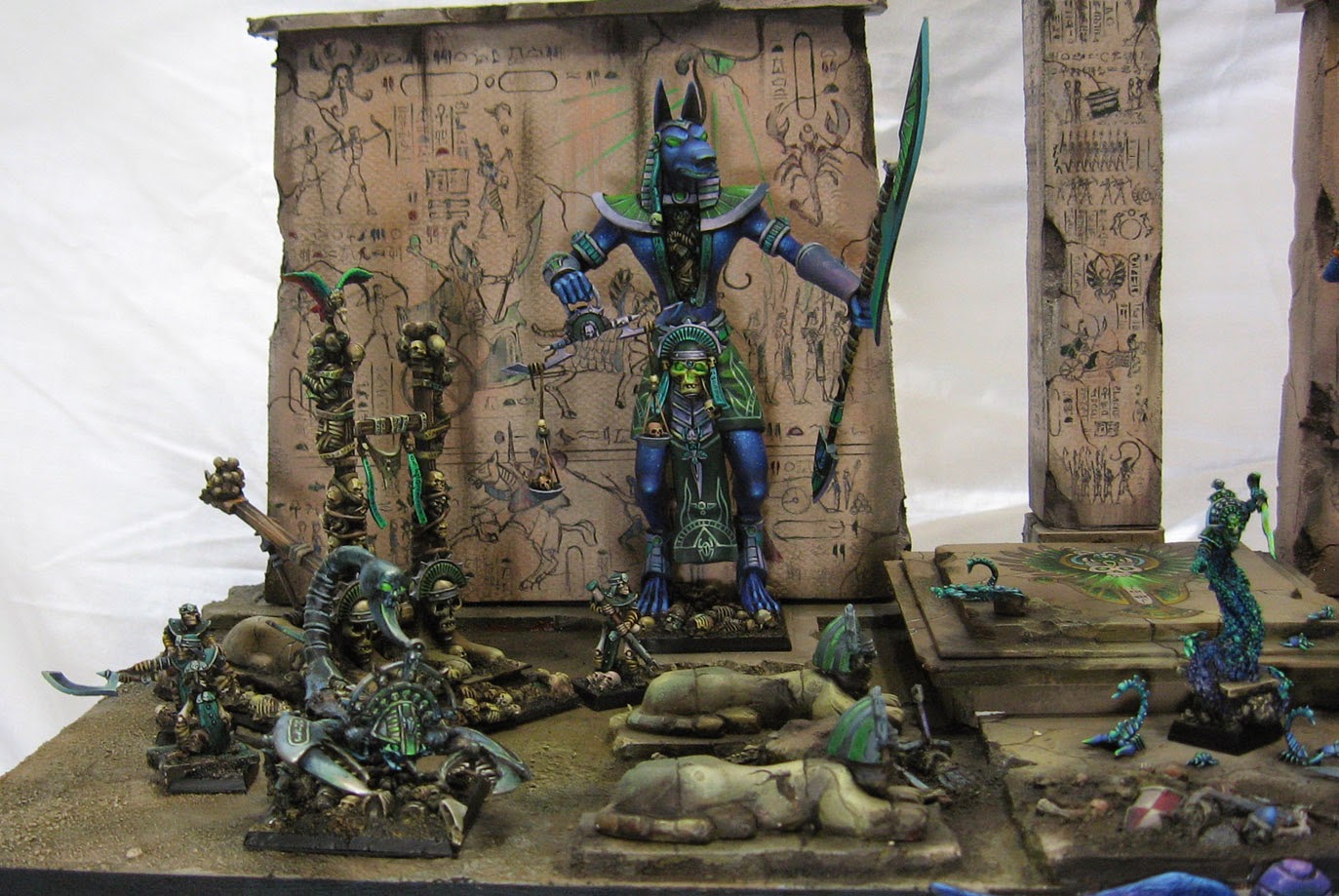 This overhead view gives a nice sense of how everything worked together... 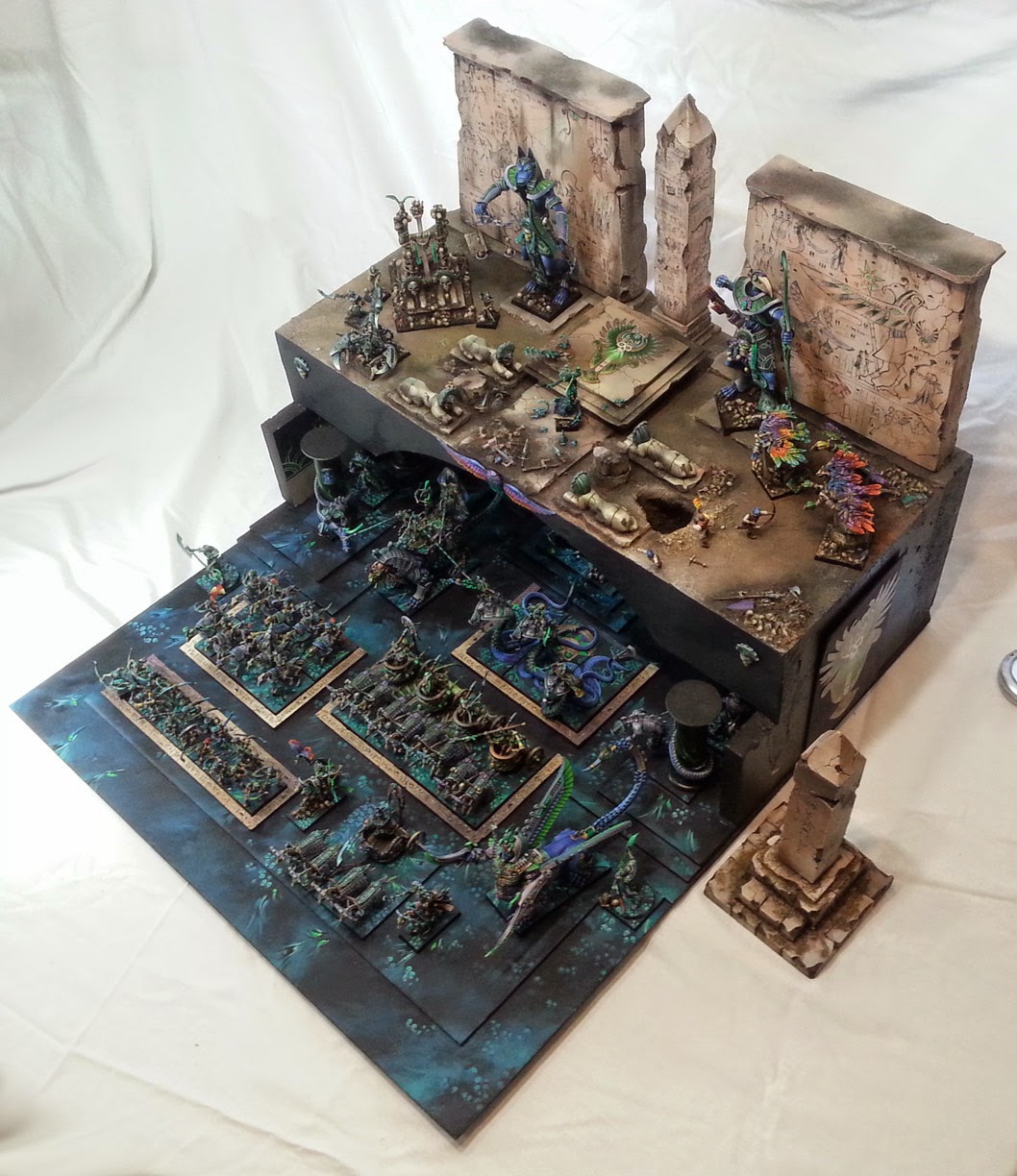 The Colossus!!  Some views of the sculpting process: 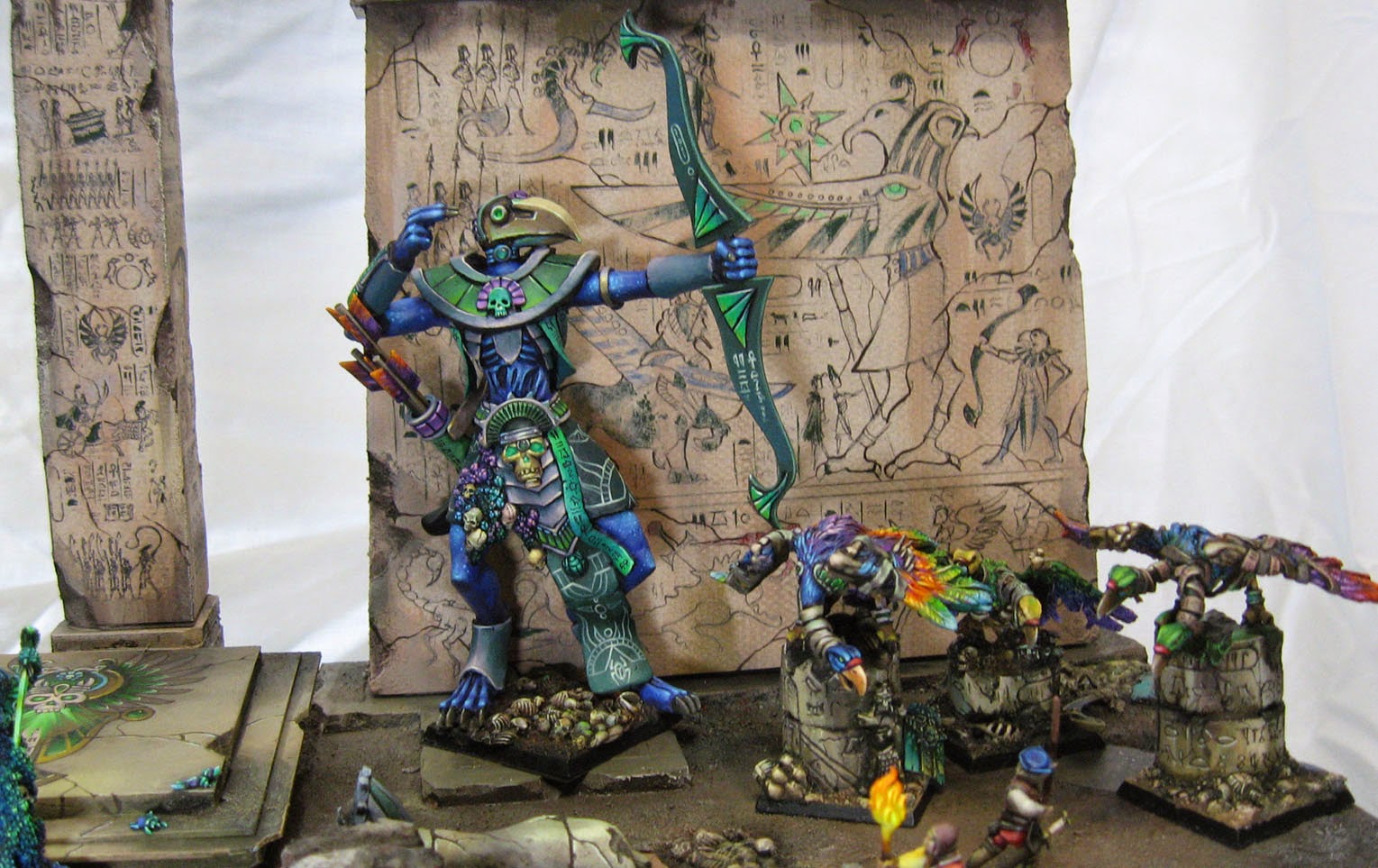 The painting of the Colossus: 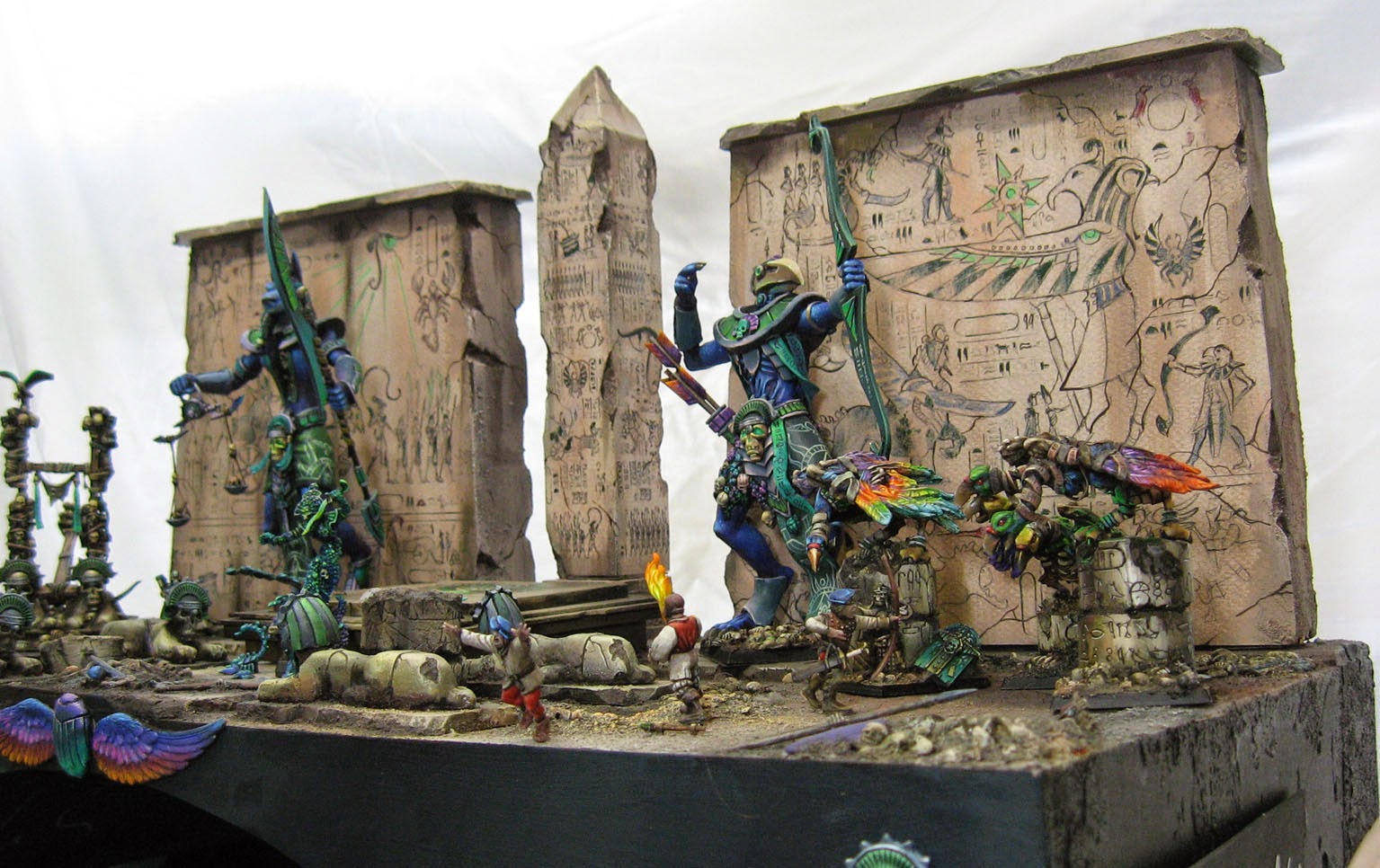 Here's the scene that was so much fun to create!

The hapless and greedy Empire soldiers are about to become Carrion food!

The Carrion were a huge part of the story, having originally been the tropical bird pets of Pseusennes.

Their bases were carved from baked sculpey. 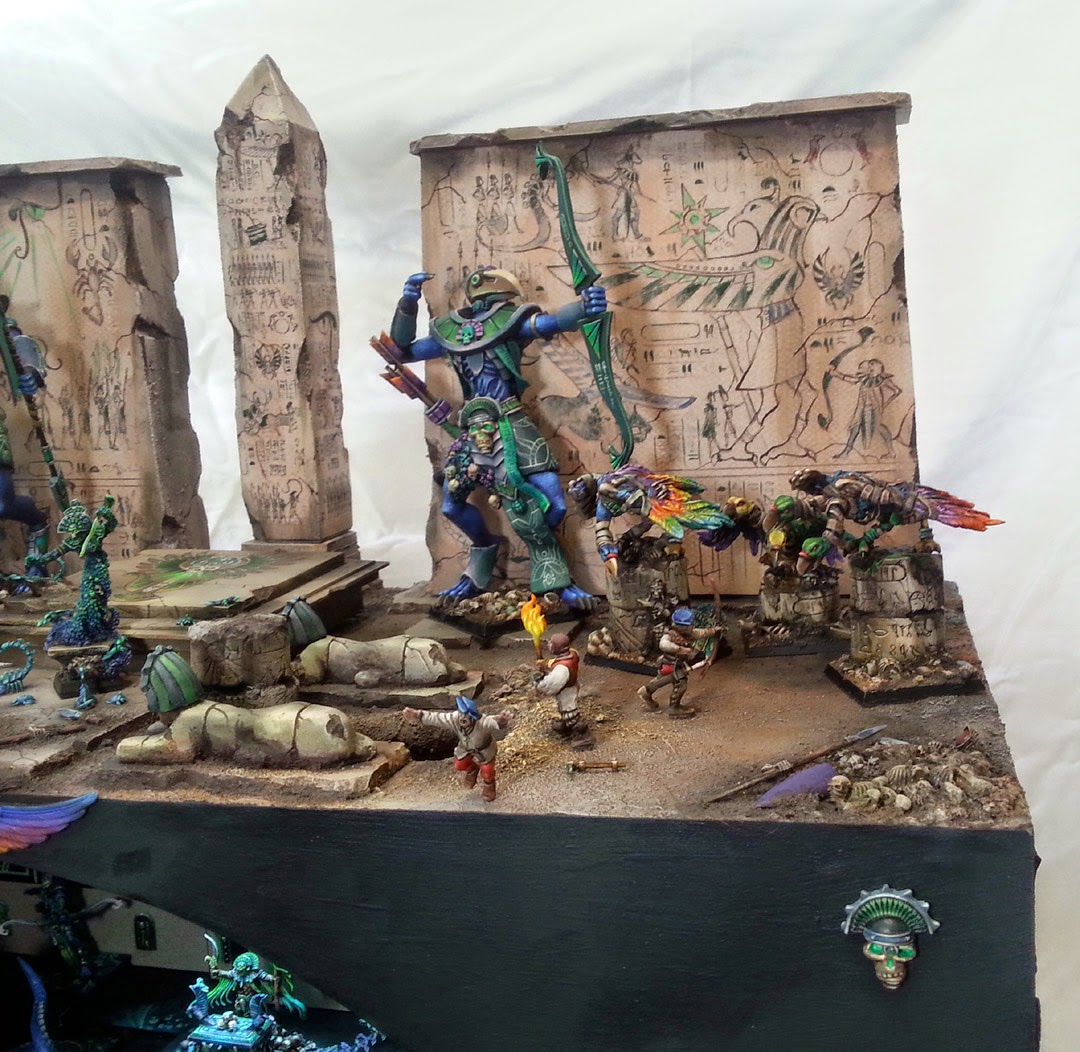 It took a lot of engineering to create the hole they had dug.. thank goodness for Oxide Paste! 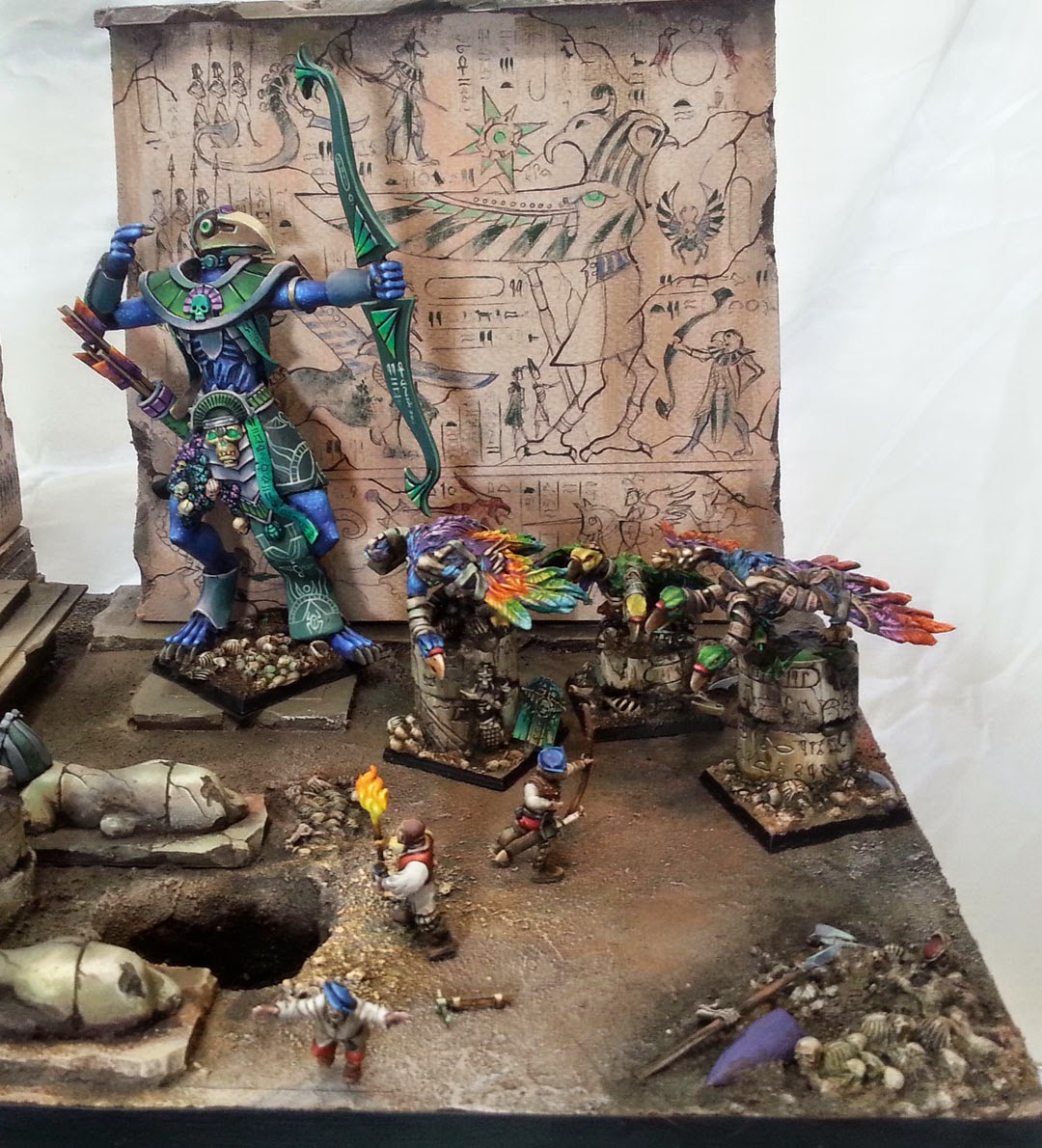 This story was meant to tie into this scene, and explain the Hieroglyphs on the walls: 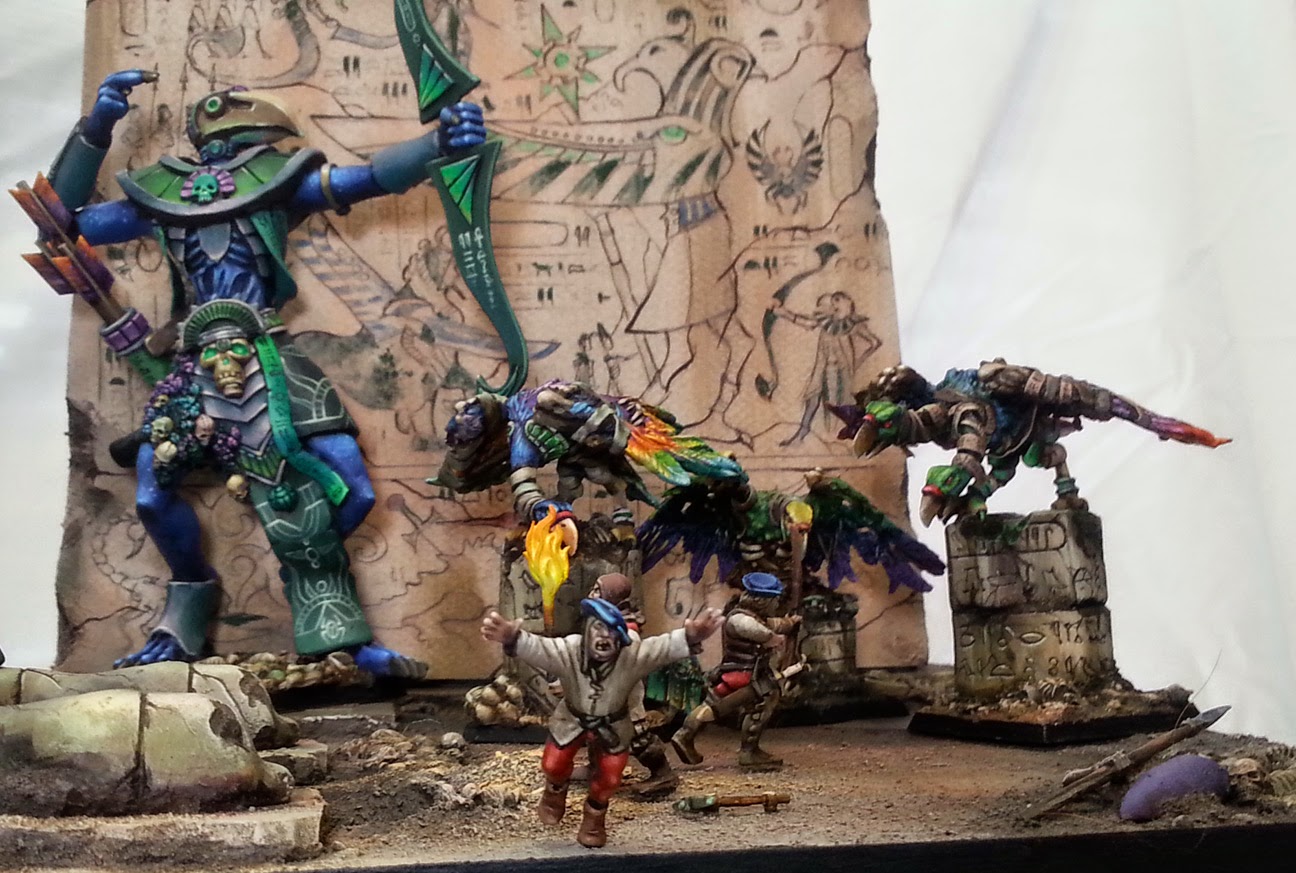 Creating the glyphs on the walls took a lot of effort, but it was worth it! 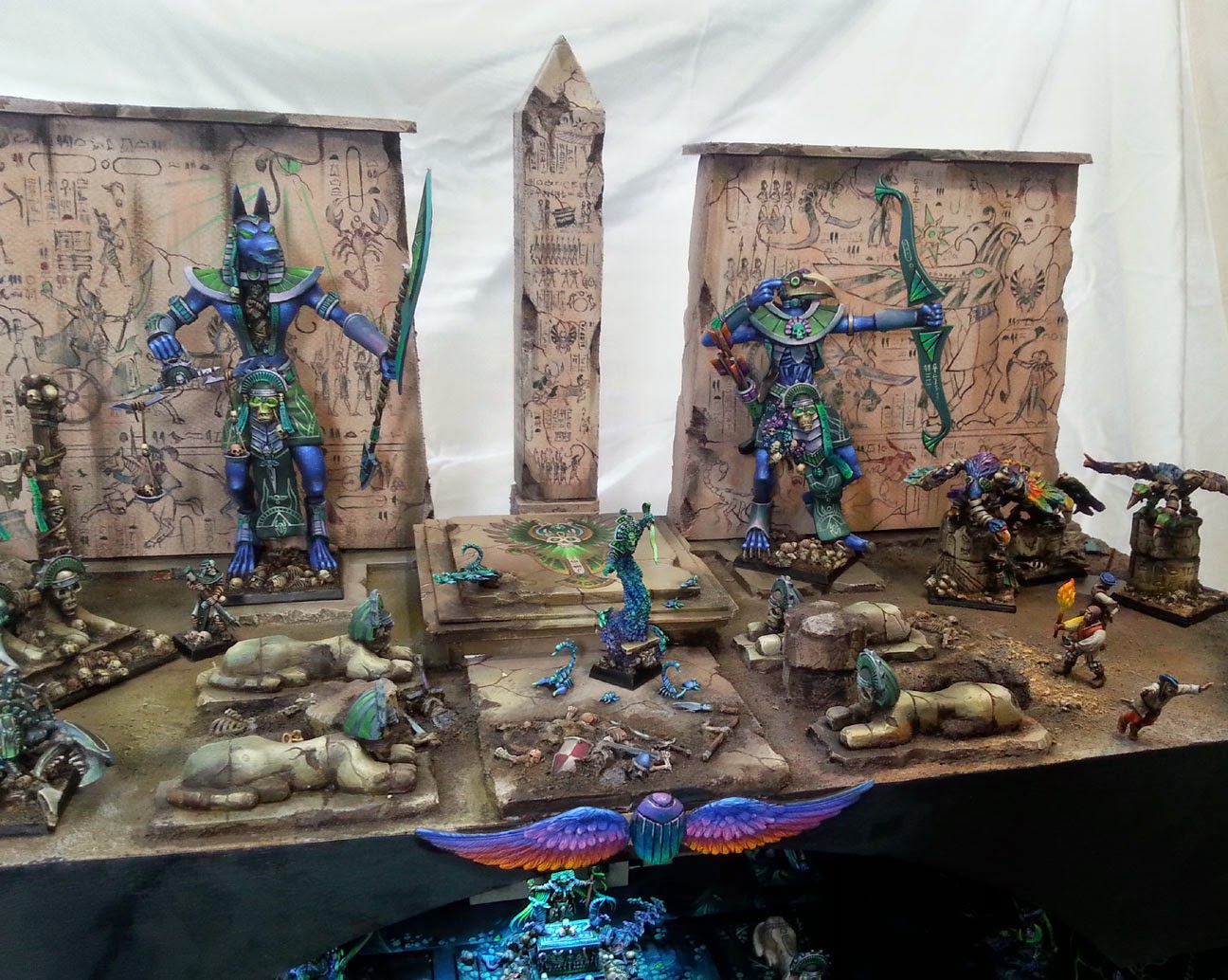 The idea was that the  Second Taint of the Silver Pharaoh would be explained in its images.  Ironically, they were so realistic, people dismissed them as mere printings of actual glyphs from Egypt! 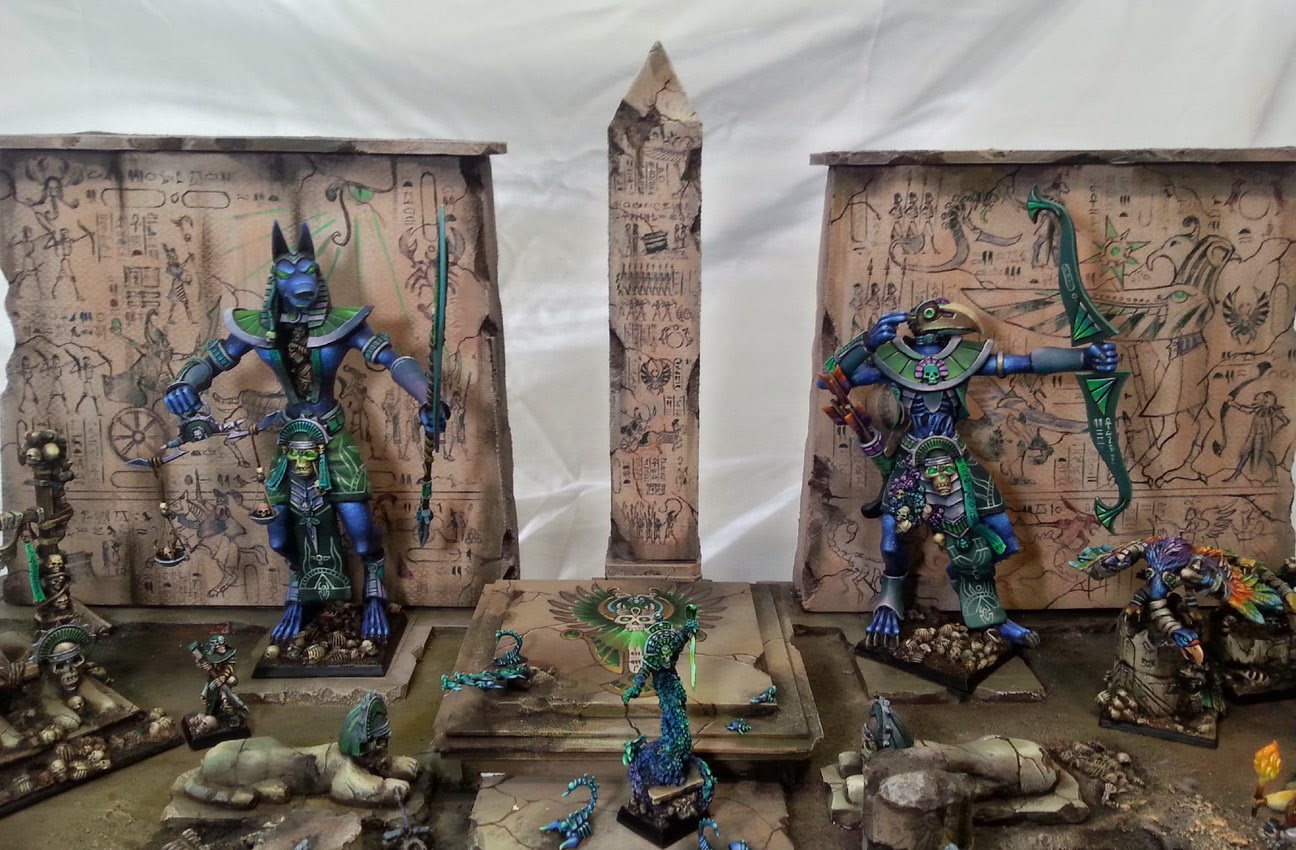 More to come!  Please feel free to look through the immense number of articles on this army and display board... about 1300 hours went into the entire project over the course of 2 years. 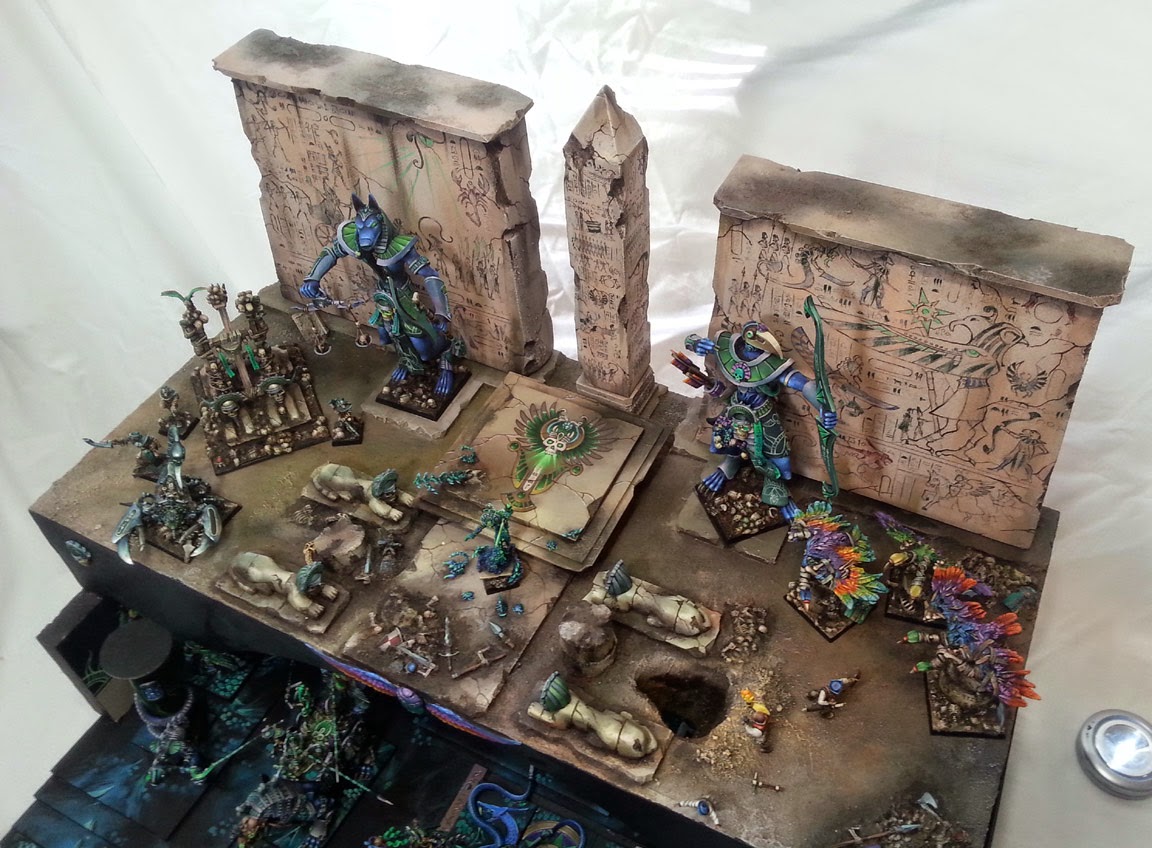 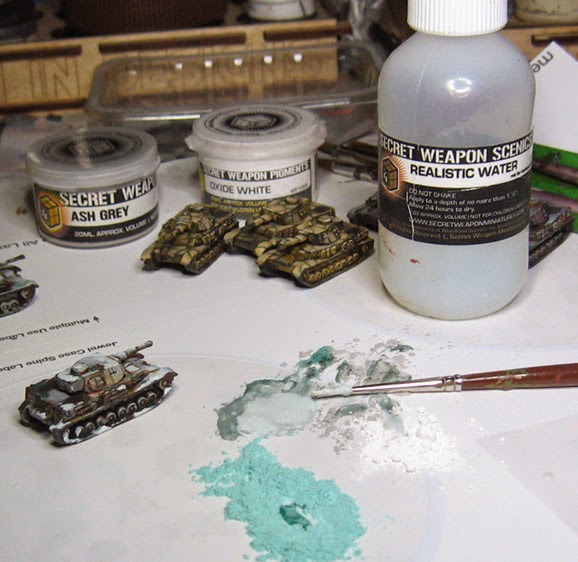 For a variety of reasons, I have decided to render the last few units of my Memoir '44 German tanks in winter theme.  Since the 'summer' colors are pretty much taken care of by other people's painted sets that we use, I wanted to get ready for the day we do some Eastern Theatre action! 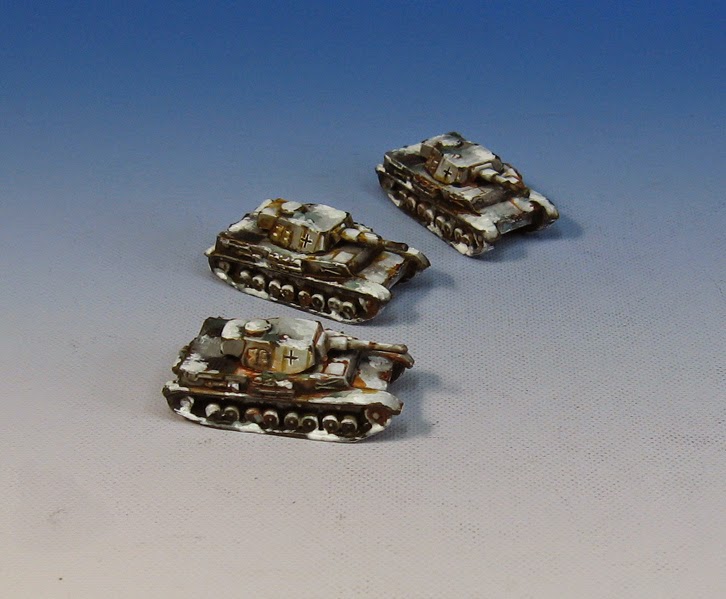 To get snow that could have some 'body' to it, yet be small enough to place on these very small tanks, only one choice crossed my mind.  That is, break out the Secret Weapon supplies! 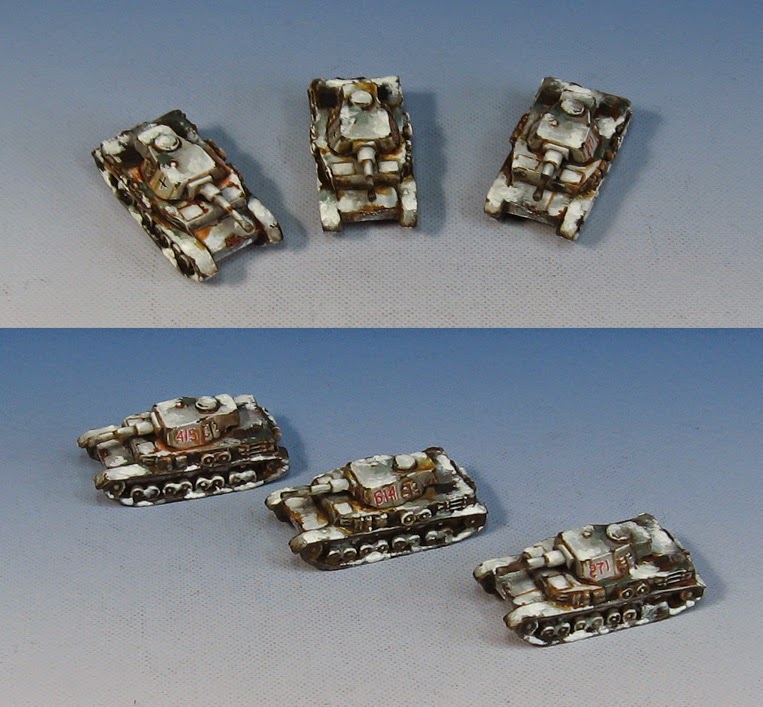 I took out a few of the weathering powders, and mixed them with the Realistic water effects.  This would provide that "body", or thickness, but still be liquid enough not to look like the tank was covered in 8 inches of fresh snow! 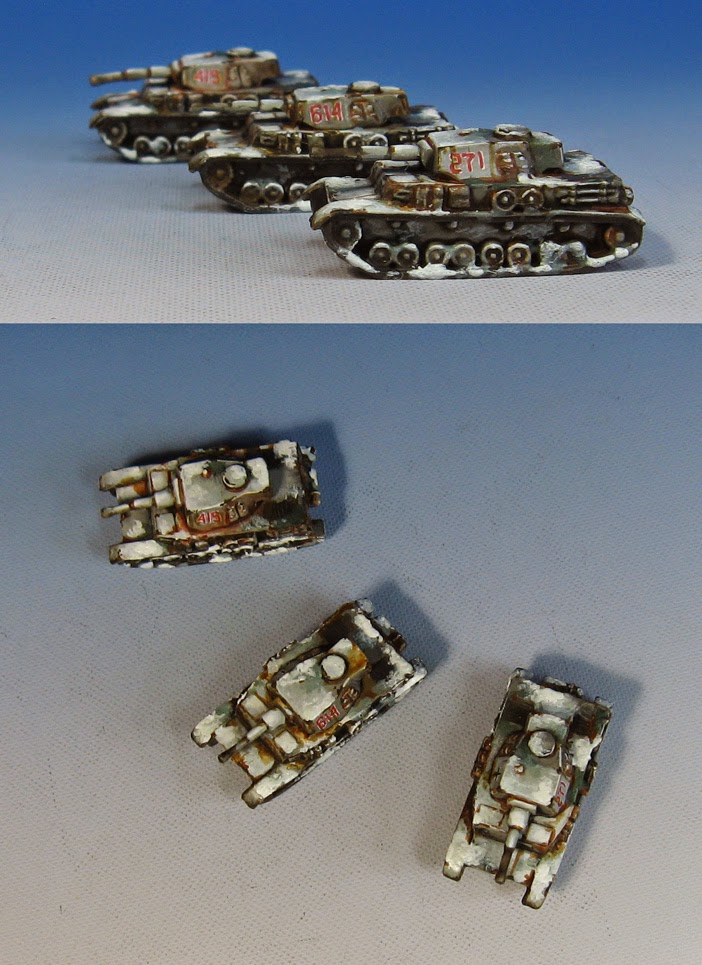 You can see the comparison with the earlier war standard gray colors.  Another fun side effect of mixing the Water Effects with the powders would be the slight shininess, making it seem like the snow was melting a little. 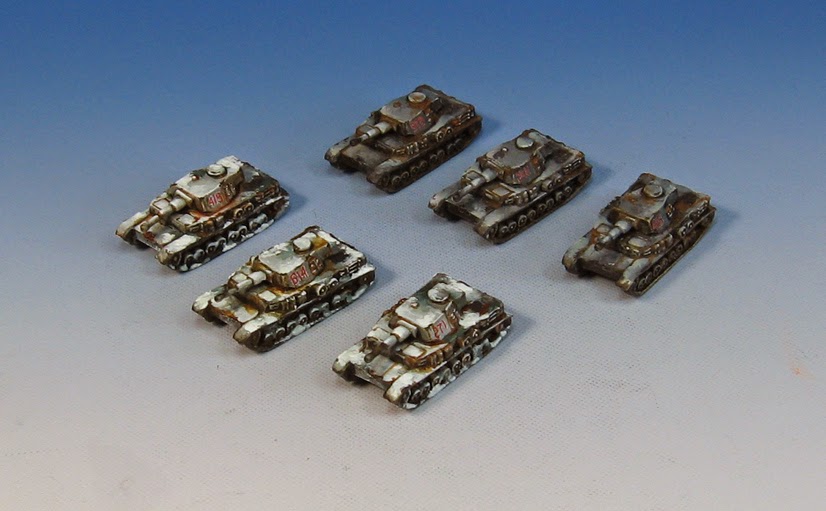 It's even more dramatic when compared to the later war camo schemes... 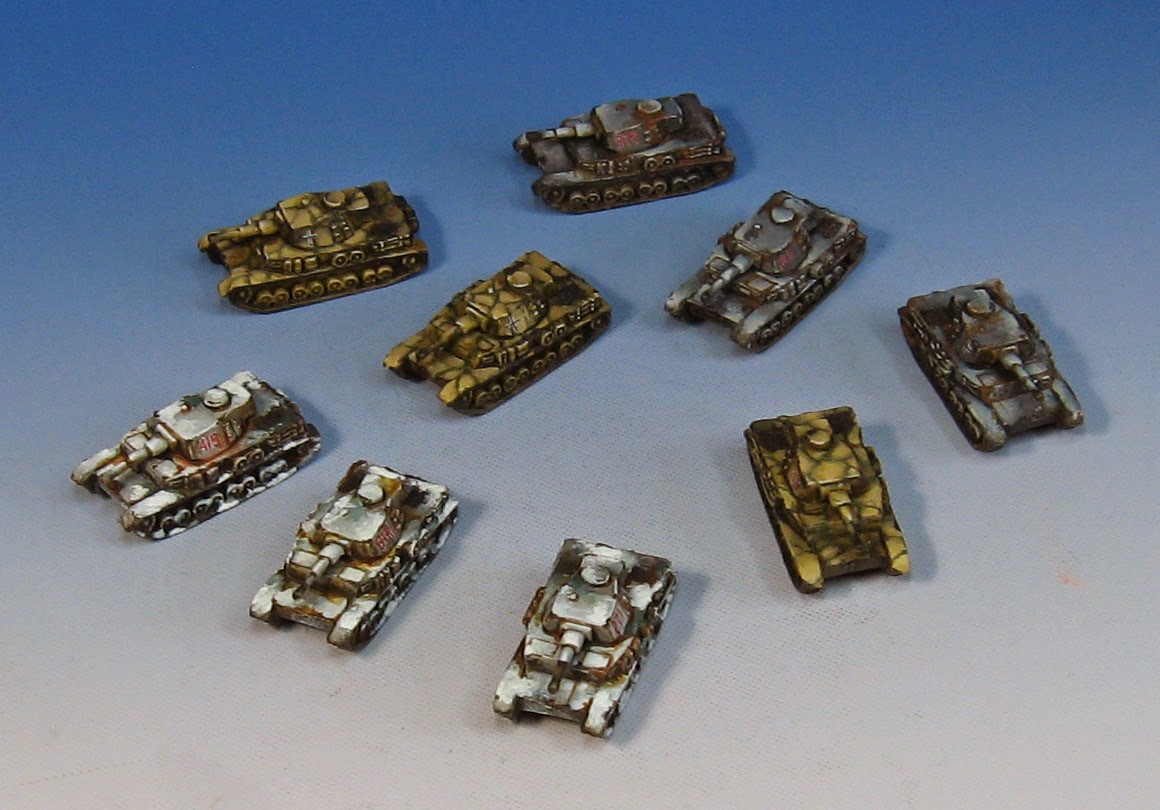 Getting this snow mix into the treads would be key... otherwise, it might just look like the grey tanks with lighter highlights!

This is the first stage of the snow.  I had two 'colors' of pigments, and the white.  The first layers were more of a blueish grey. 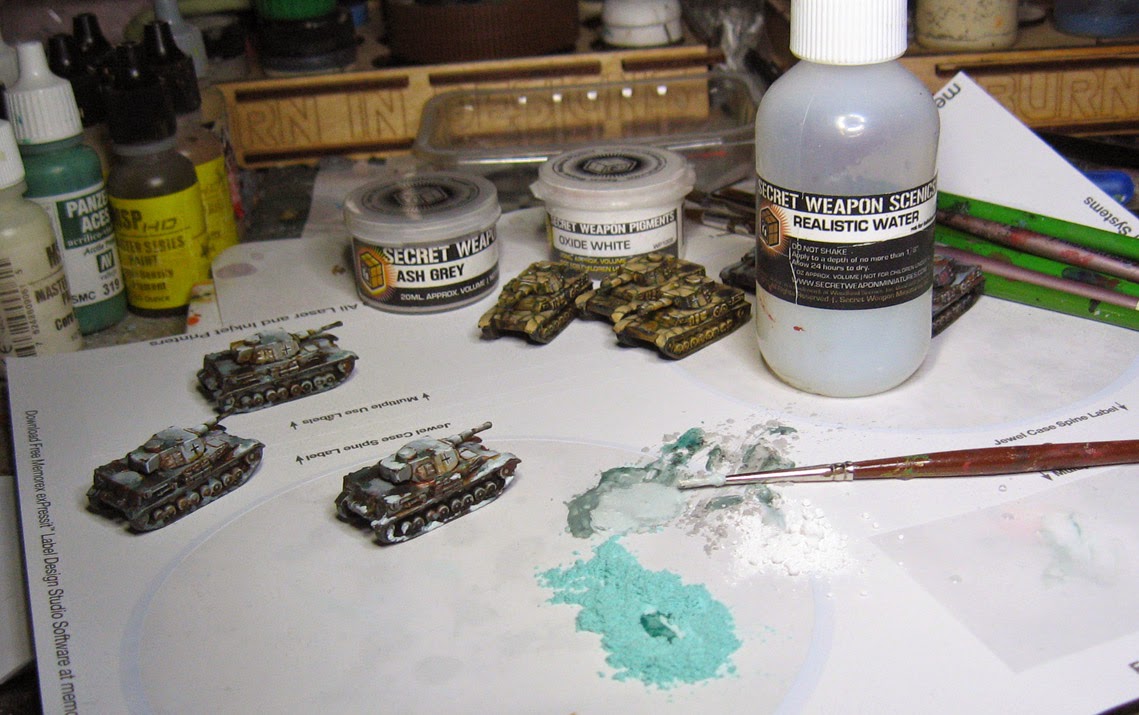 This was followed up with a few more layers of almost pure white... still mixed in with the water effect.  Very fun!!!  Thanks to Secret Weapon for such fun and flexible materials! 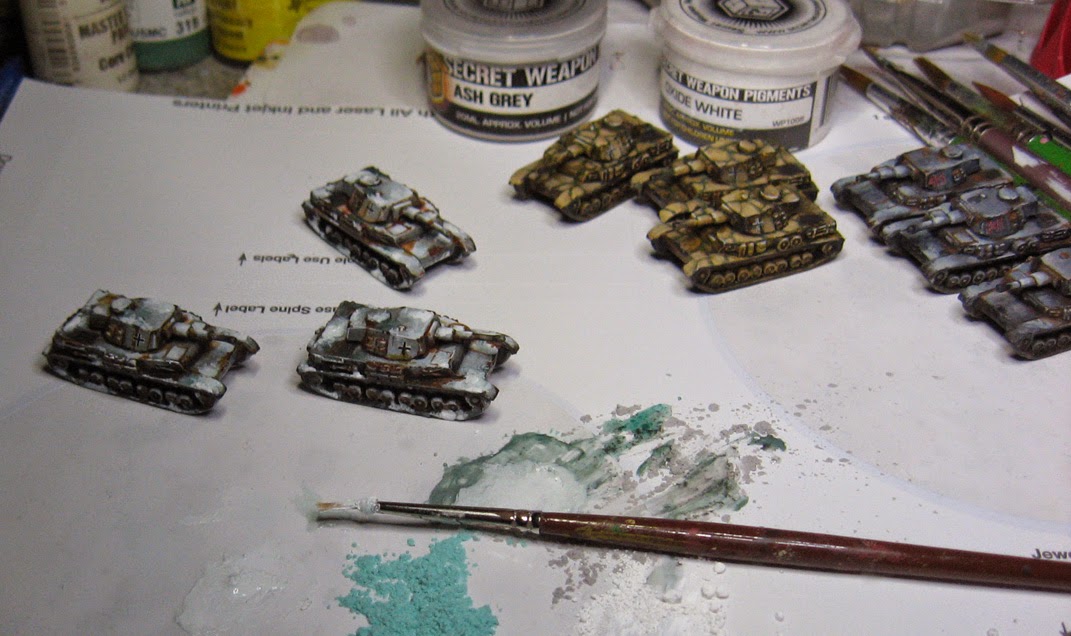 Posted by wappellious at 1:29 AM 4 comments: