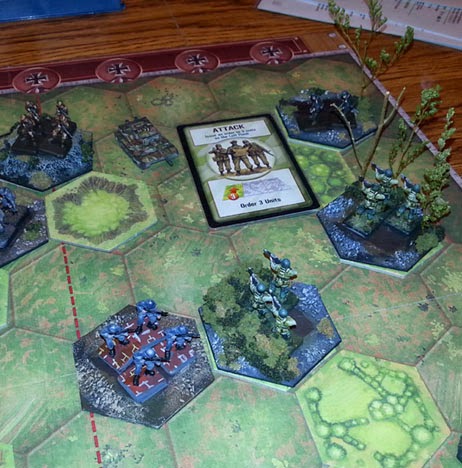 Yes, there have been a lot of Memoir '44 posts lately.  My apologies for that!  Most of the miniatures work I am doing is all prepping of miniatures, and not terribly picturesque.

Also, every day begins and ends with scenes like this: 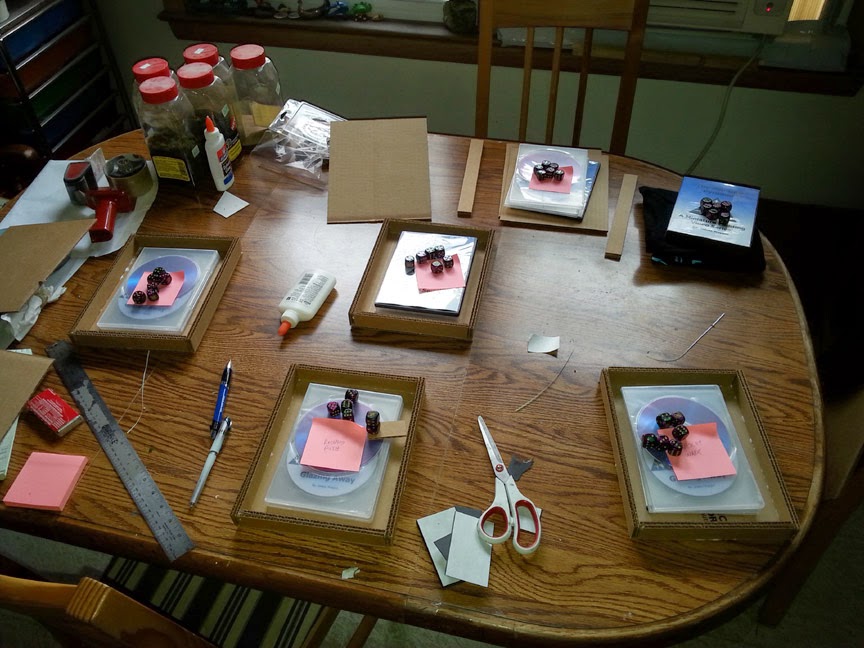 To keep from going completely insane, Rich has been stopping by for a few quick sessions of Memoir '44.  This time around, we tried a campaign.

I think they are structured quite well.  If one side wins a game, then that effects which fight you do next.  There are also pre and post game rolls which are affected by the result from a previous game, and so on.  Wonderful!

This was the set up for Game One: Panzer Lehr Counter Attack.  Rich would be playing Germany. 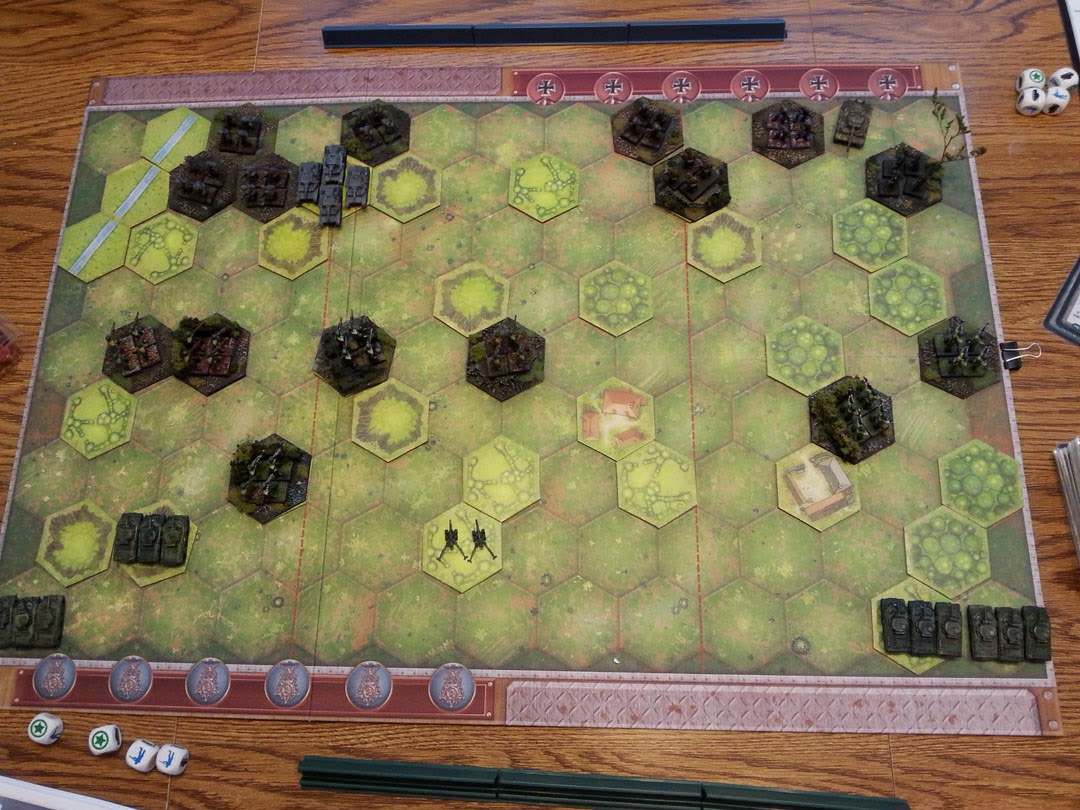 The American G.I's are bracing for what could be a devastating assault by the forces of the 3rd Reich. 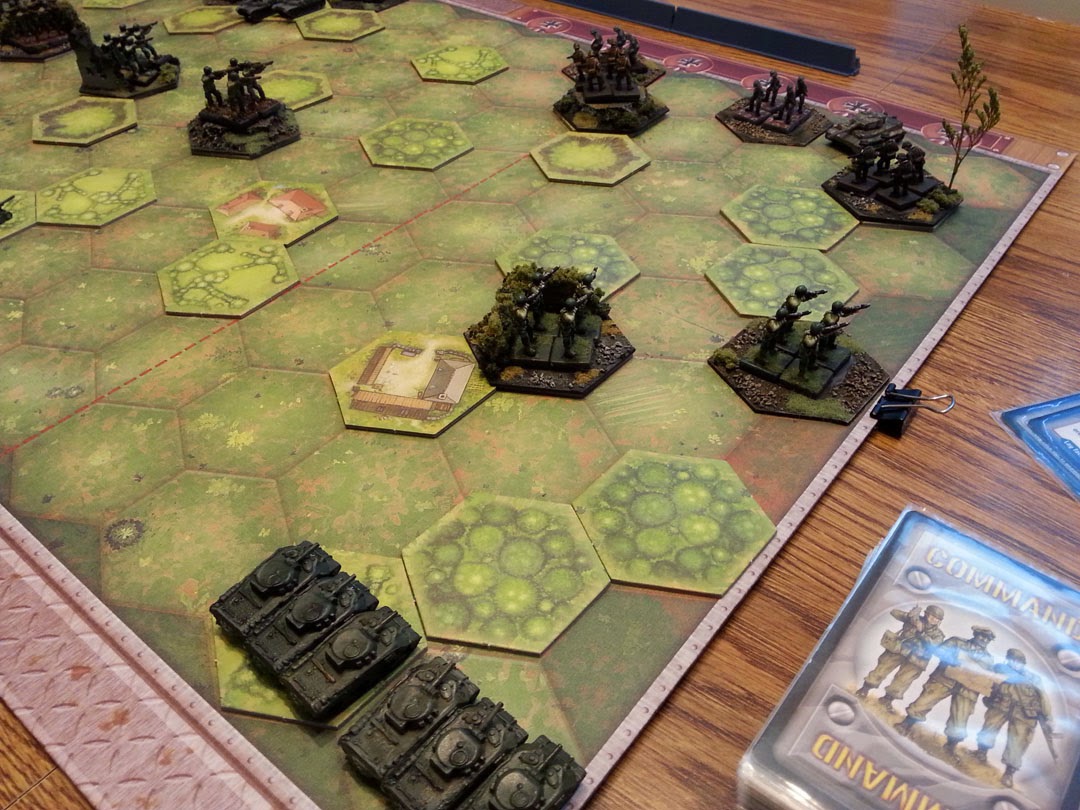 Tank ace Whittman even appeared on the battlefield!  His "007" tank has a huge bull's eye on it... 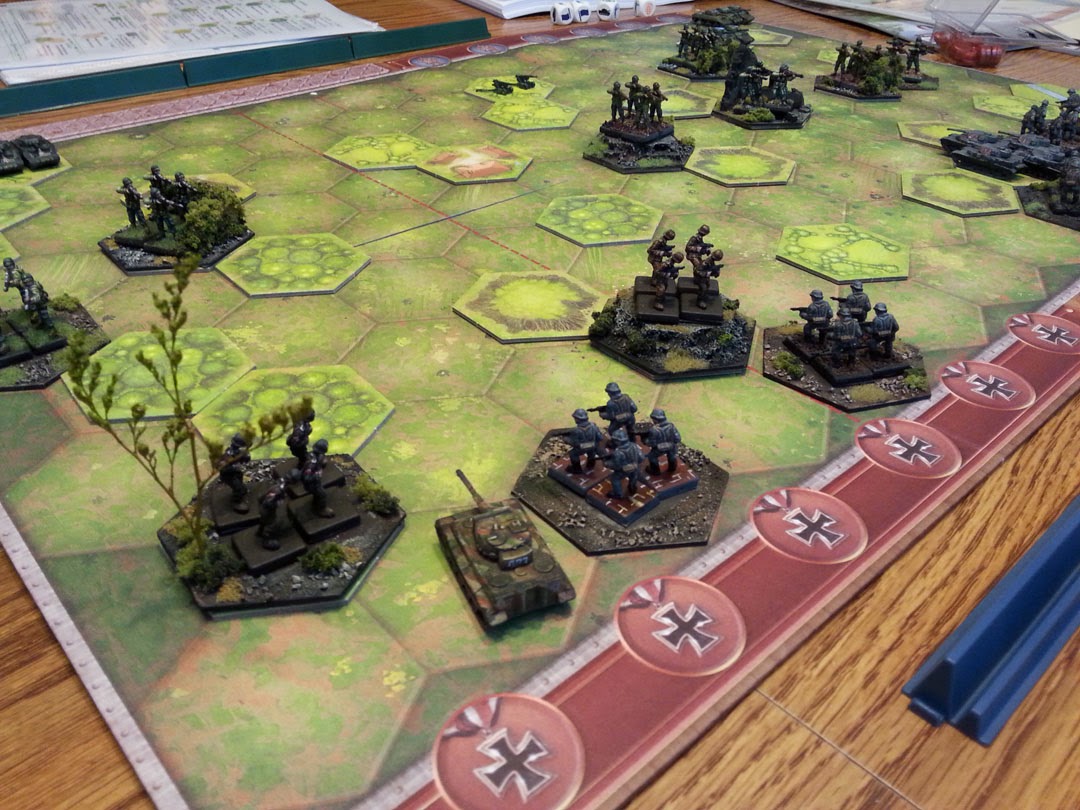 All of the German infantry in this match is elite, which means they can move fast and hit hard! 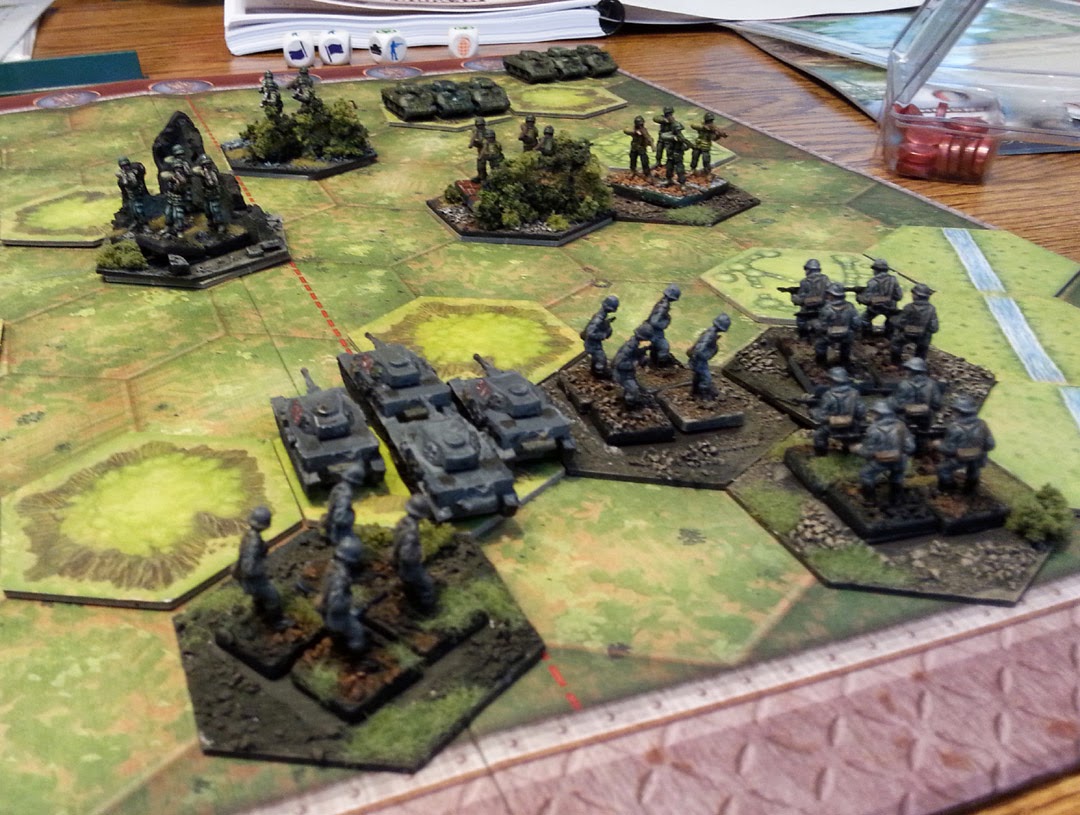 The Americans are hunkered down in villages and hedgerows... waiting... 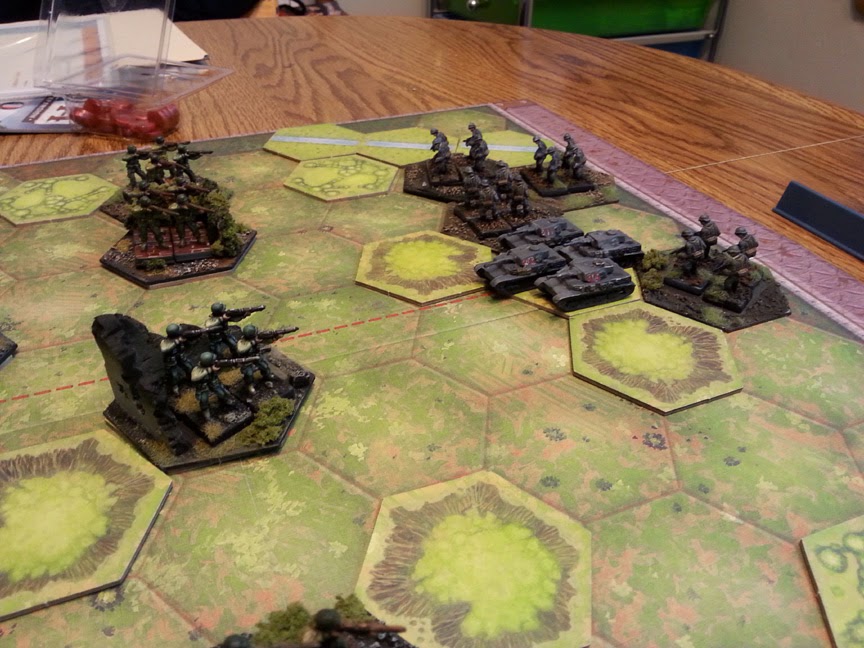 My initial card draw.  This is a perfect balance of starting cards.  Lots of activity in all sectors, along with a very crucial "AMBUSH" card, which I will save for the inevitable surge by the Waffen SS and Gestapo units. 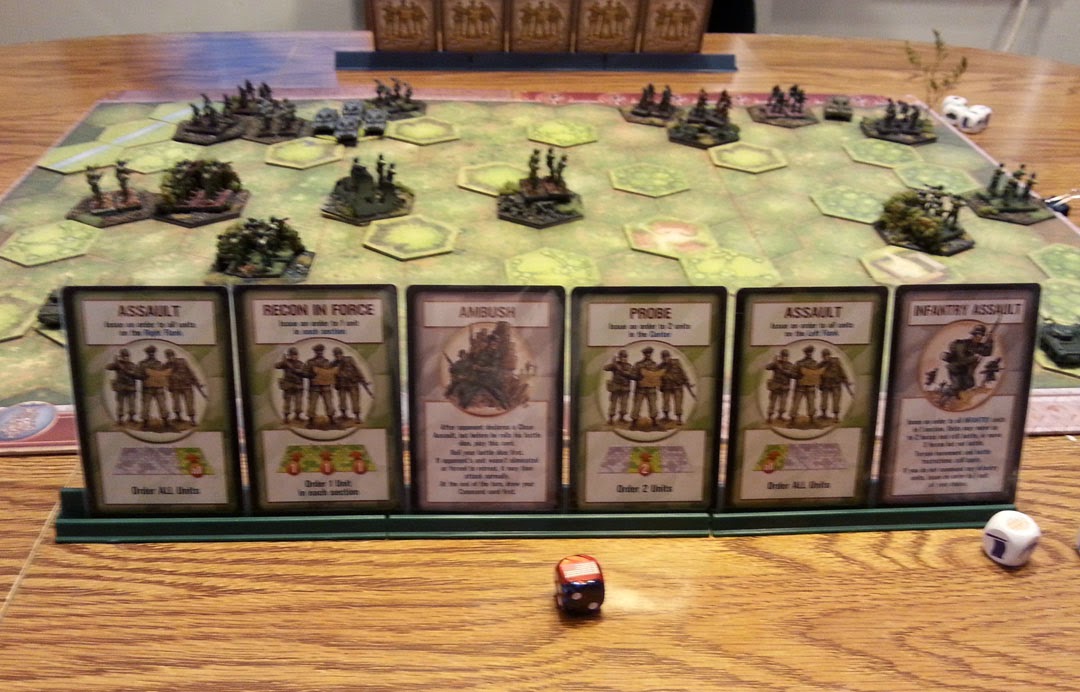 My pre game roll gave me mobile artillery, which you can see in reserve.  This is very significant, as this stuff can move into a better position, and then hammer those advancing units.  Line of sight and terrain are no impediments to artillery! 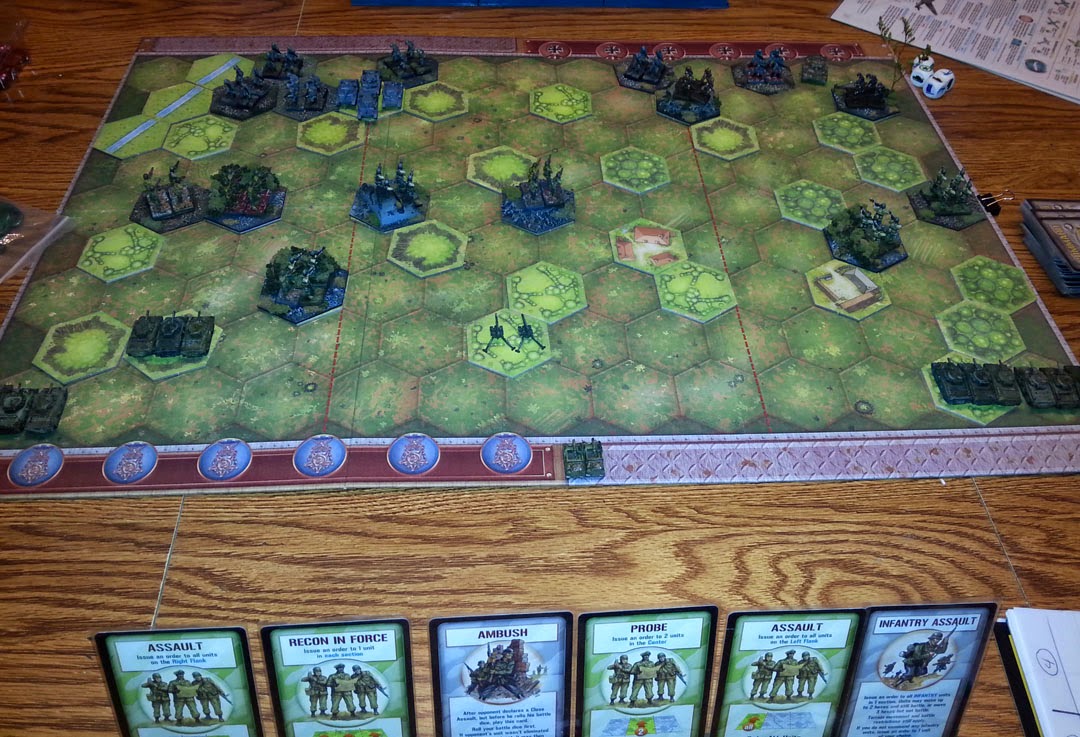 Onto the board!  A simple first move, just getting everything in place for the next turn. 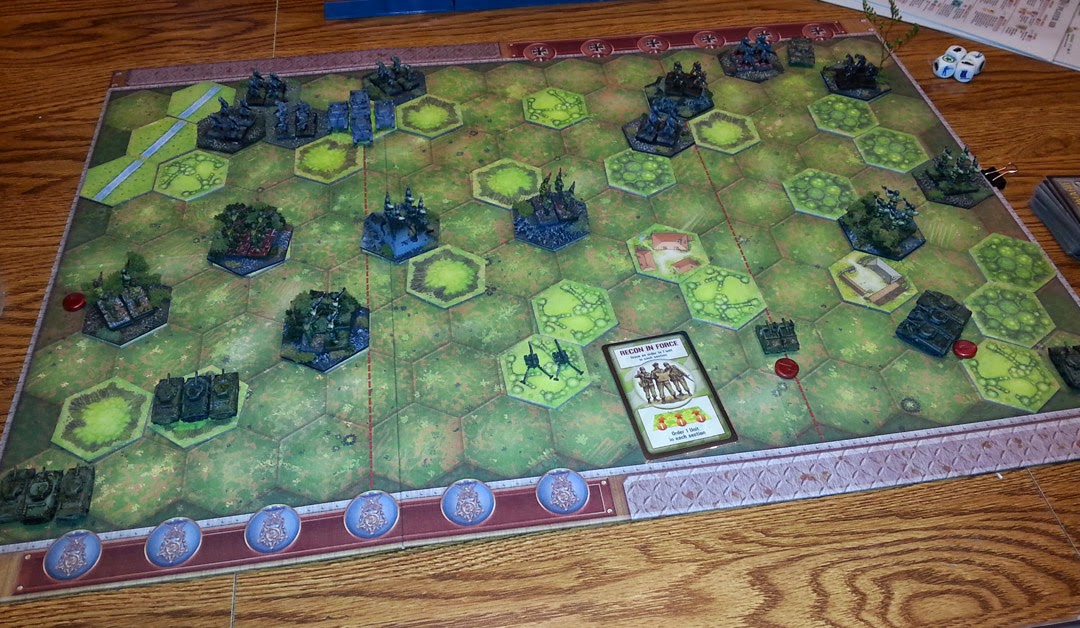 Whittman attempts a bold advance with his Tiger Tank. 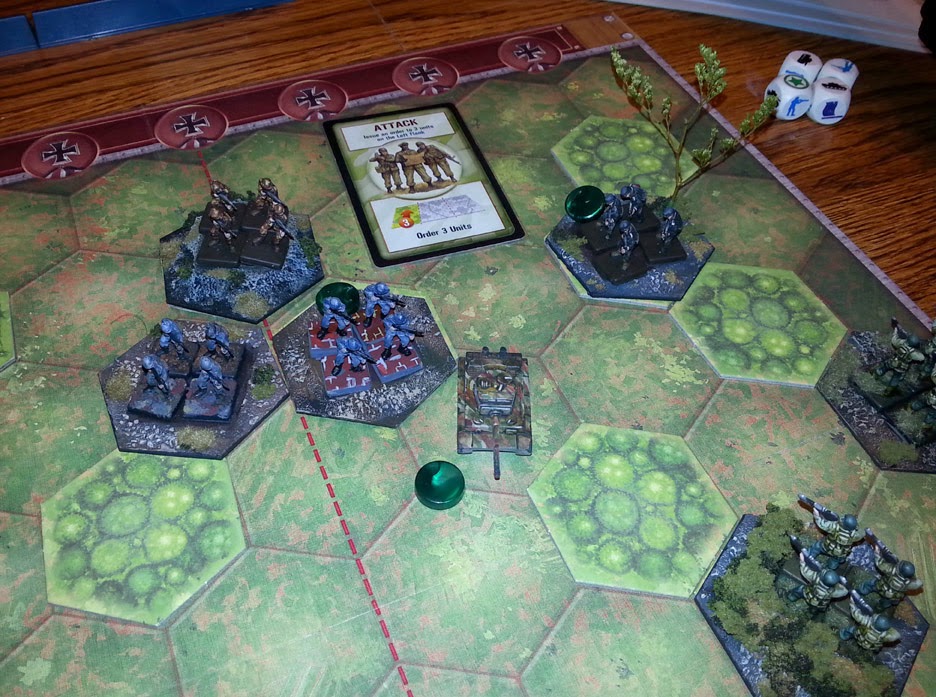 The Americans respond in force, but the shells bounce harmlessly off the powerful behemoth's armor. 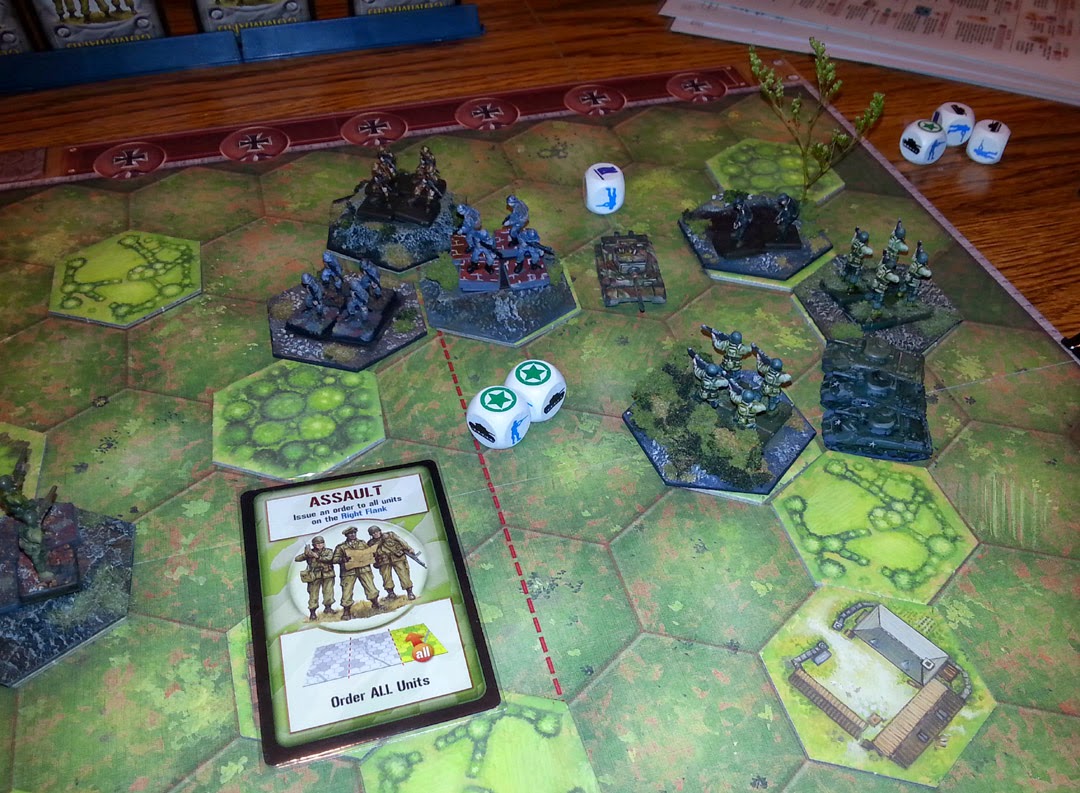 Looks like a big fight is gonna happen here! 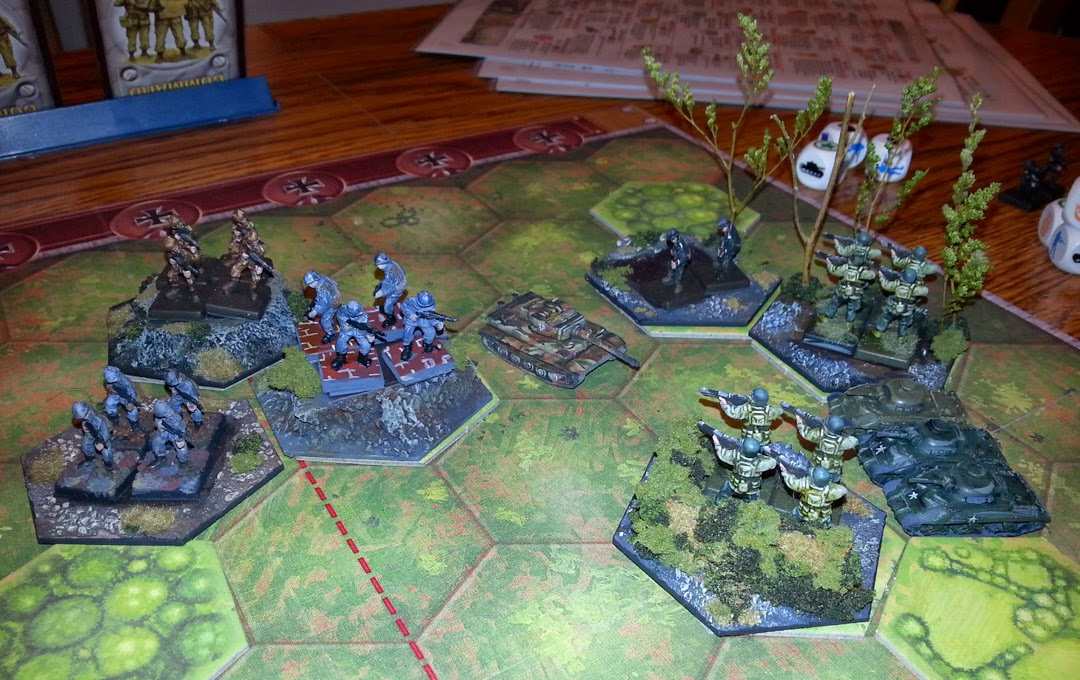 The Americans attack once again, forcing the Germans to retreat.

Stay tuned for the next episode, where we see furious action all over the battlefield! 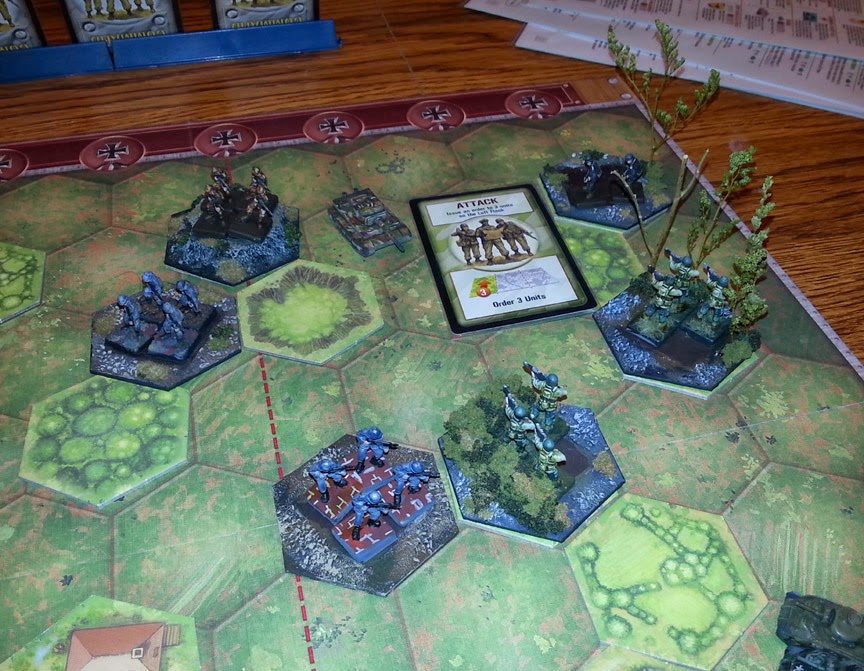 Posted by wappellious at 4:31 PM 2 comments:

The towering table of terrain 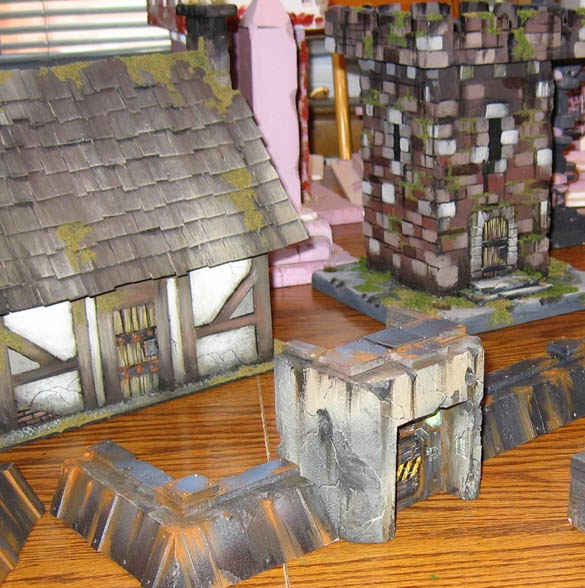 Now I know why I have been having such a hard time finding a place to put all the terrain I have made!  In fact, this is not even the entire collection. 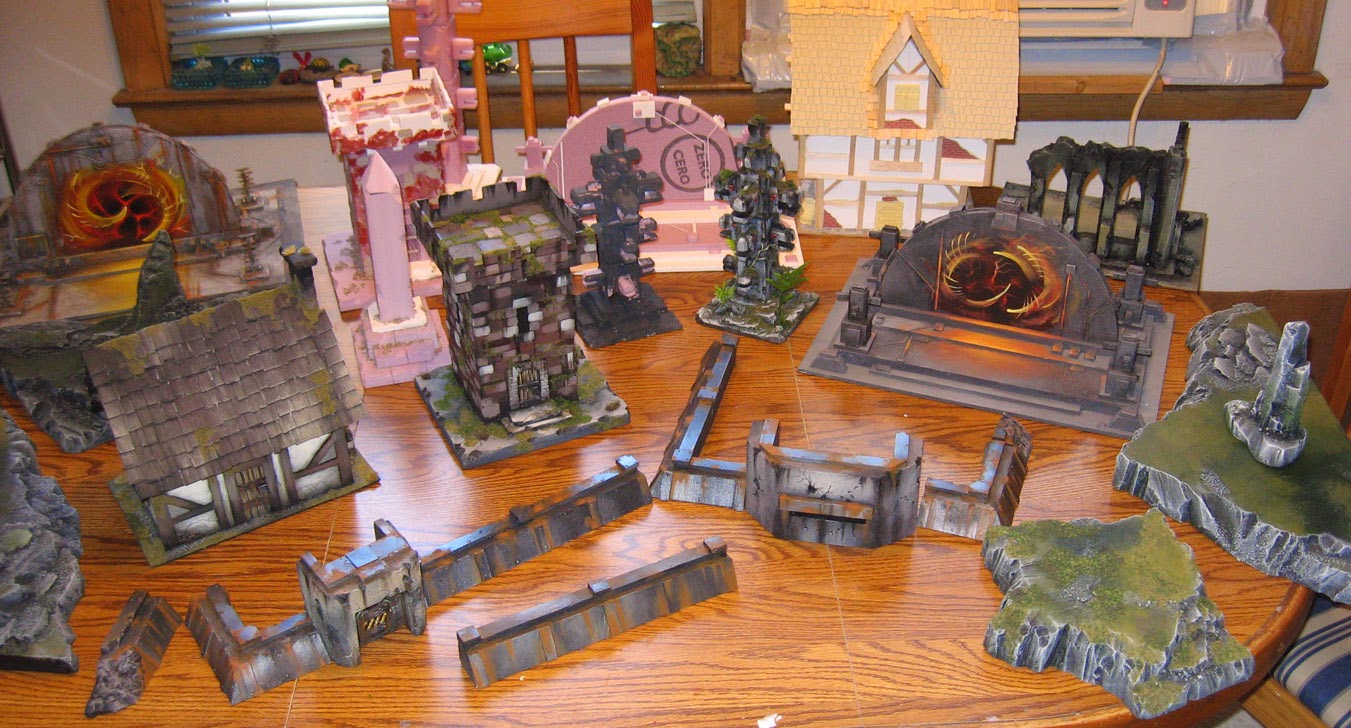 Much of this was made for the terrain videos.  The finished obelisk is not there, along with some other buildings. 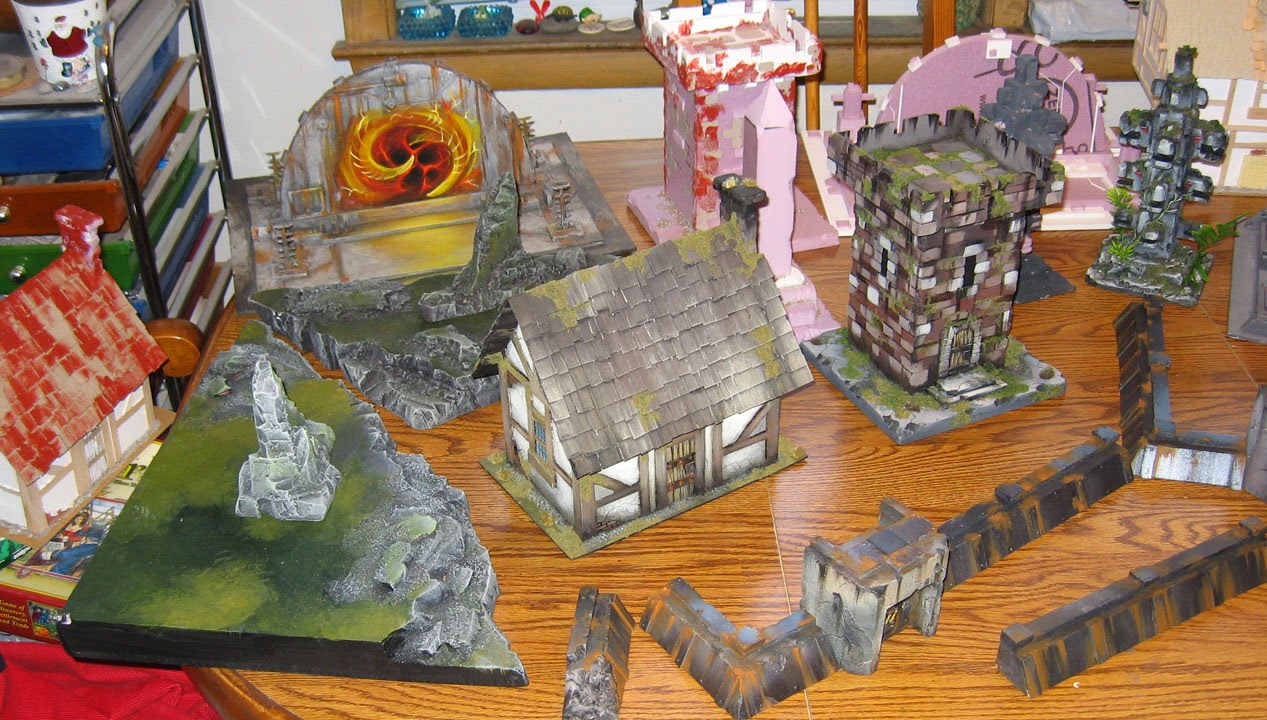 You also have to count the 5 display boards I have made.  Those take up even more space!

All this does present plenty of game playing options! 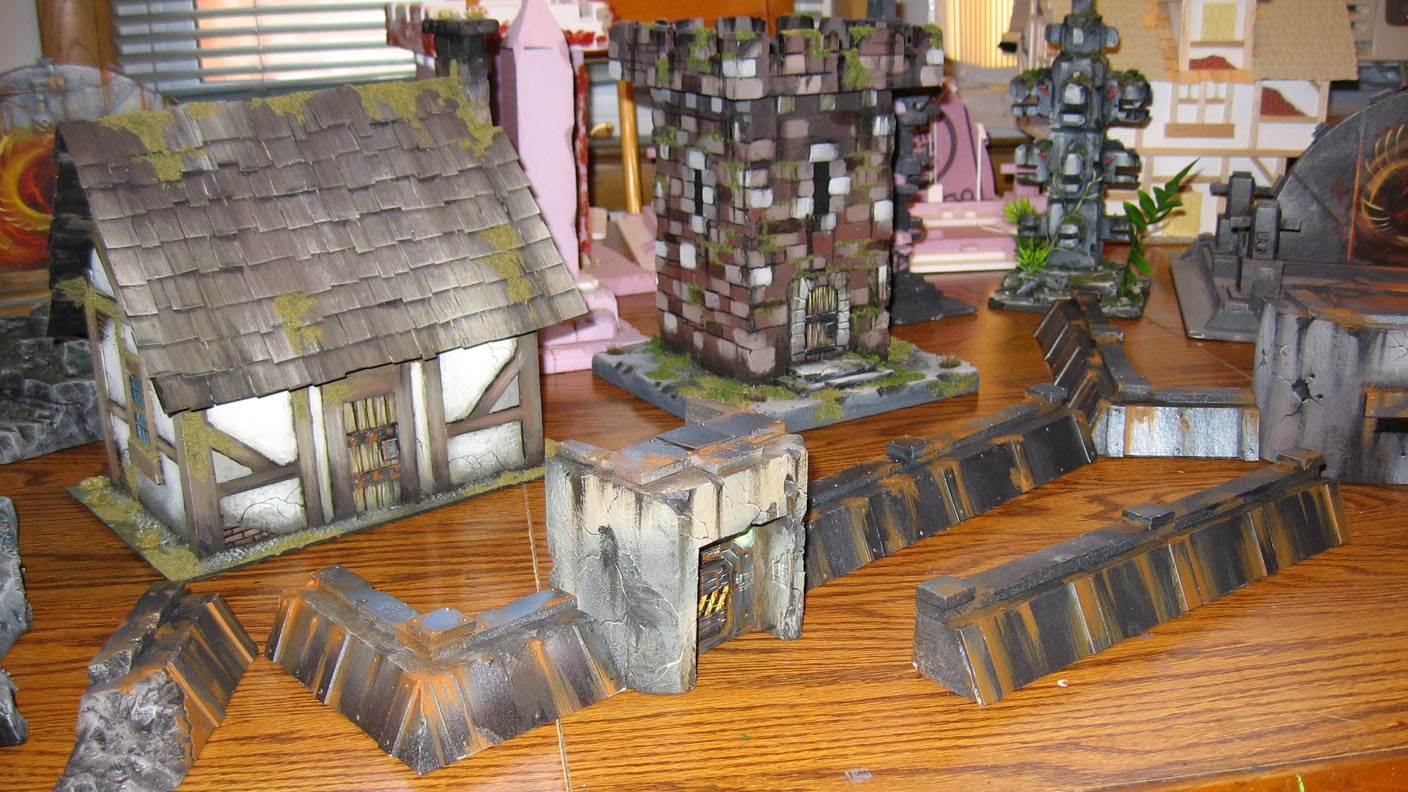 It was pretty wild seeing this all in one place, however! :-) 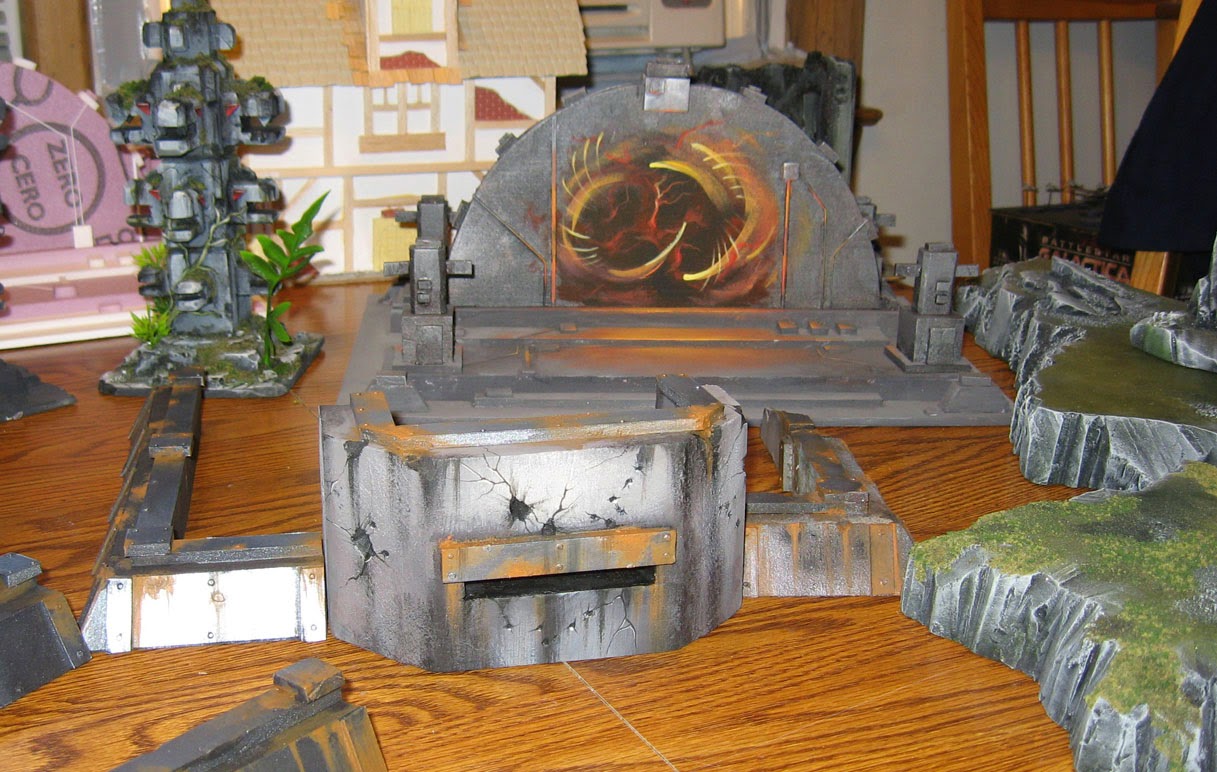