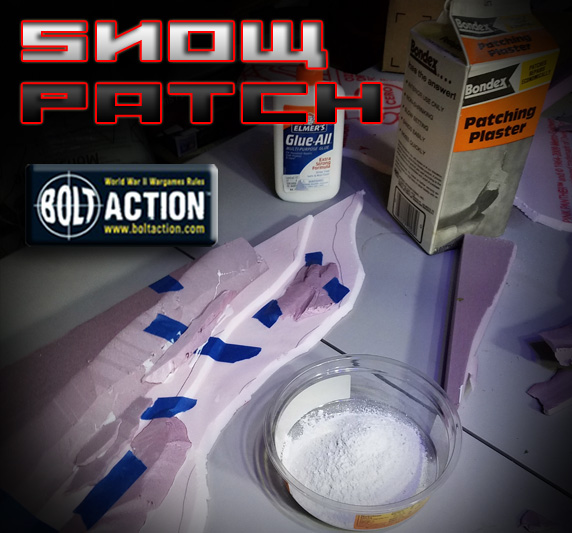 Part two of the winter terrain series begins with a much larger version of the piece that was created in part 1.  I will be using a much larger scrap piece from the Barbarossa board, and a piece of the thin underlayment foam. 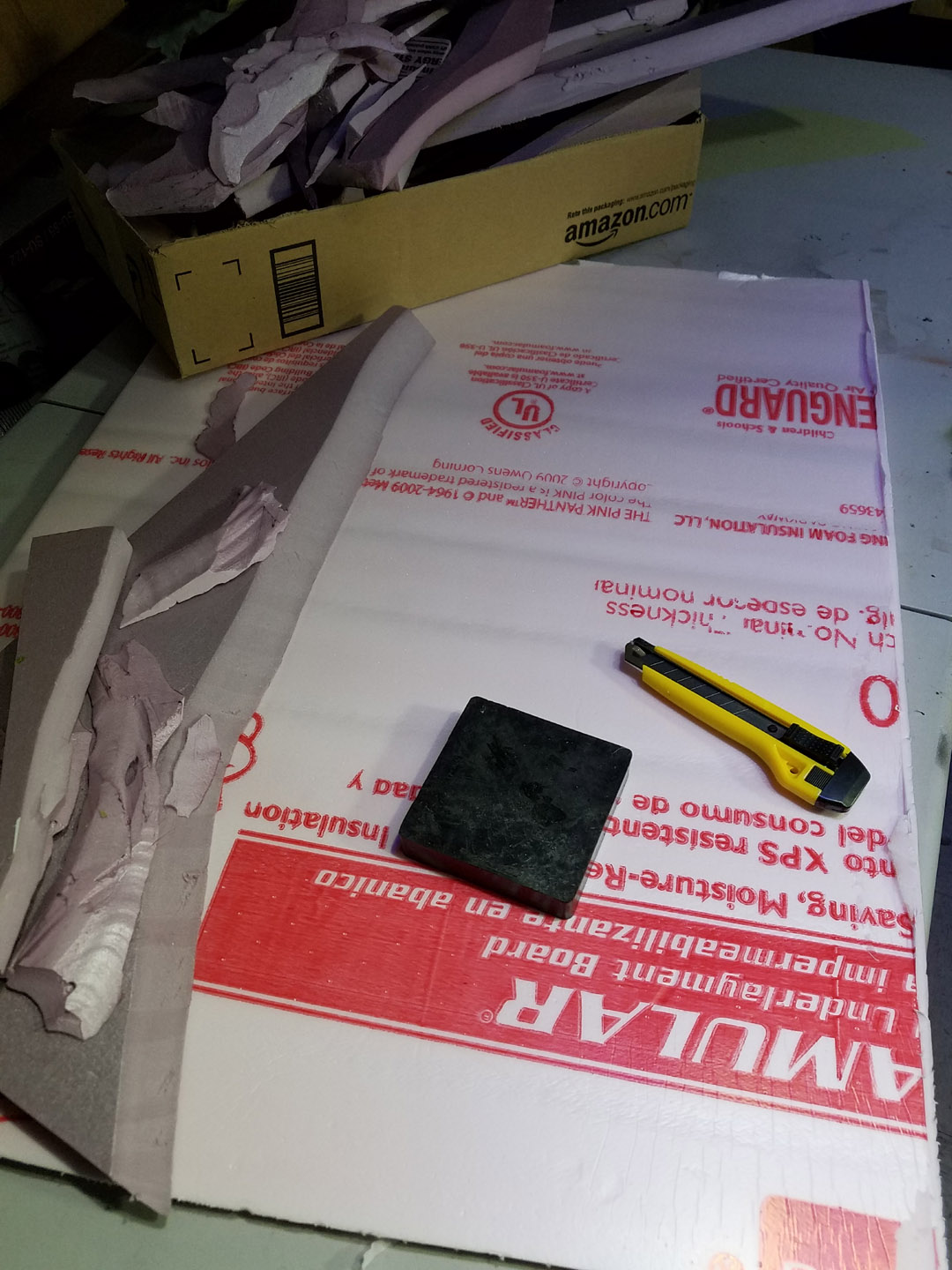 You can see the progressive levels which were added with each section of thinner foam.  I also tried to vary the shape of the edges of the thinner pieces.  When I did the forest board, those tended to end in very neat arcs, and with this board, I want to have them be more irregular.

Note that each piece is cut with a beveled edge, and that I have left some room for adding trees, rocks, and other elements. 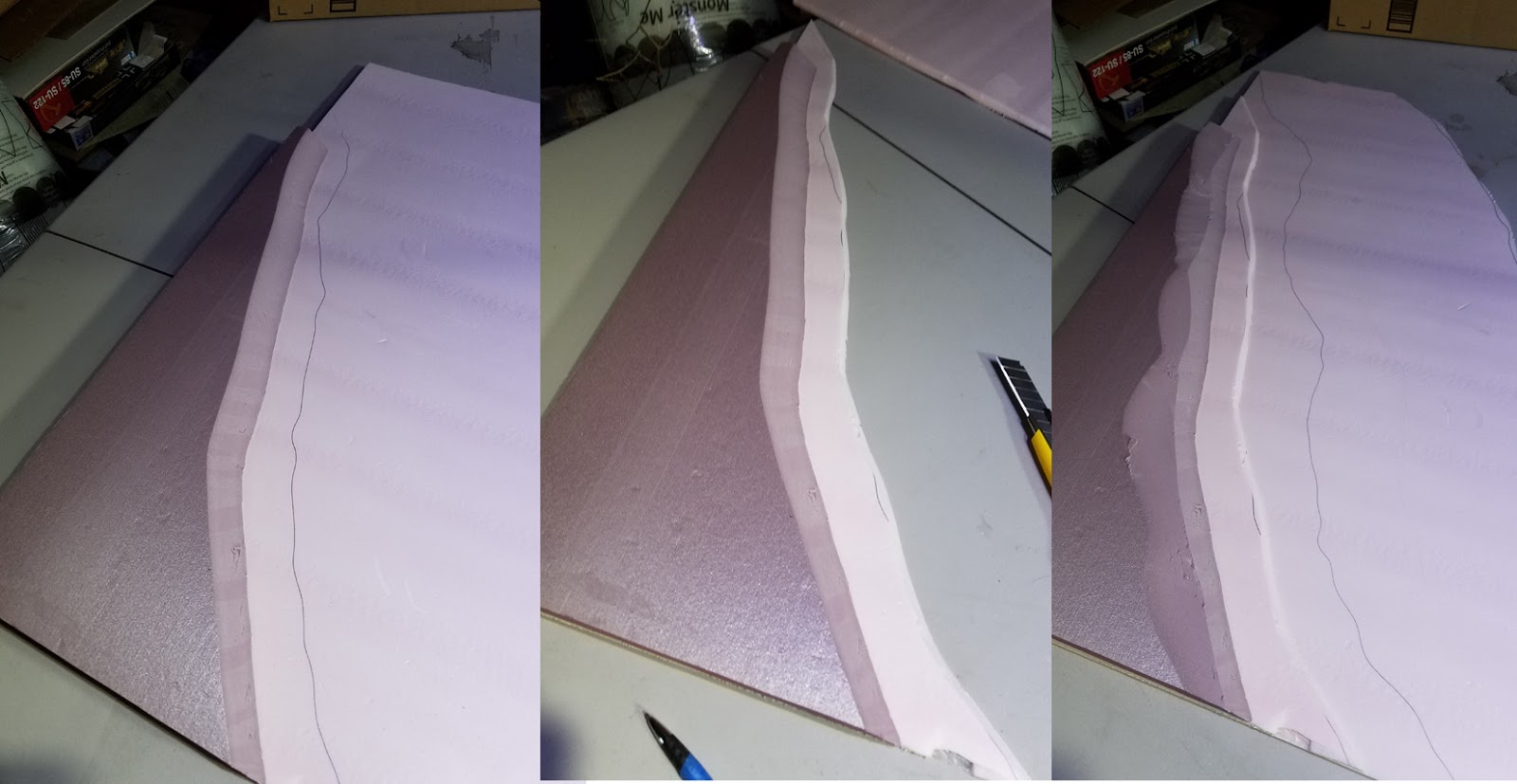 I always save my left over pieces!  The two sections on the left are going to be ideal for larger rivers which will need bridges for crossings.

The image on the right shows that irregular edge I was talking about... 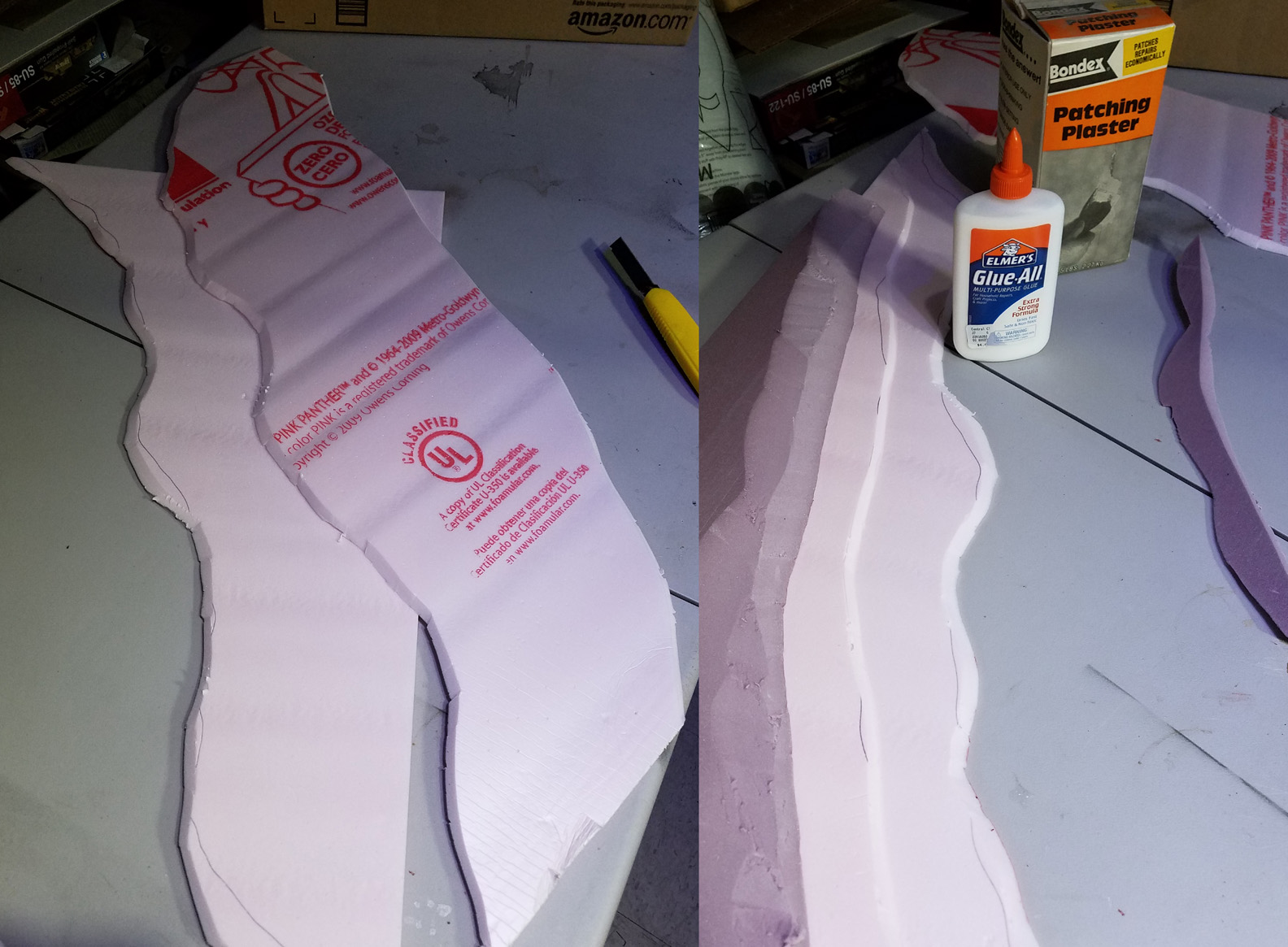 After gluing the pieces together, strips of painters tape were added to keep them from warping or separating during the subsequent steps. 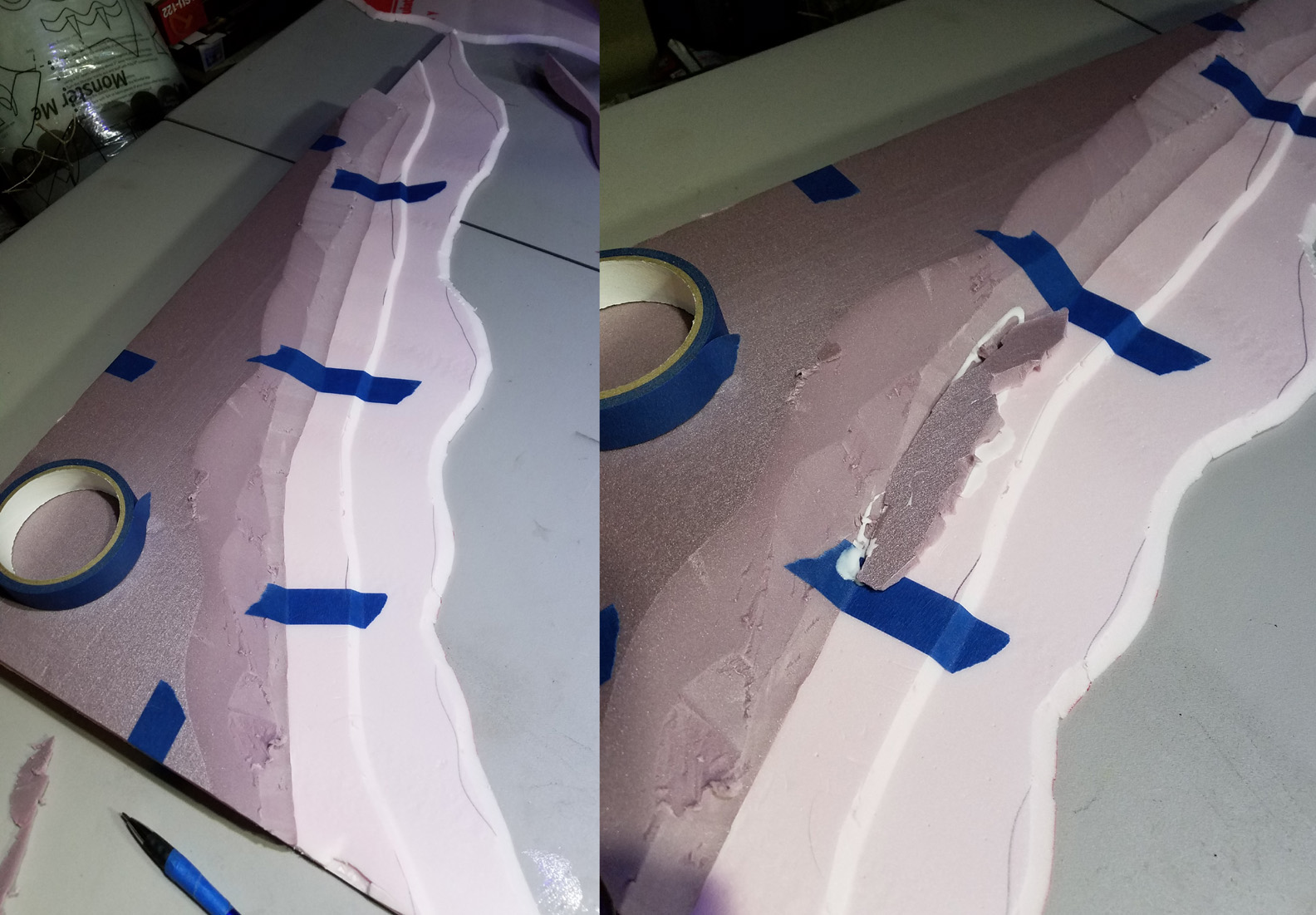 Just as was done in part one, I took the shaved pieces of thicker foam and made 'steps' of rocky outcroppings to resemble slate, etc. 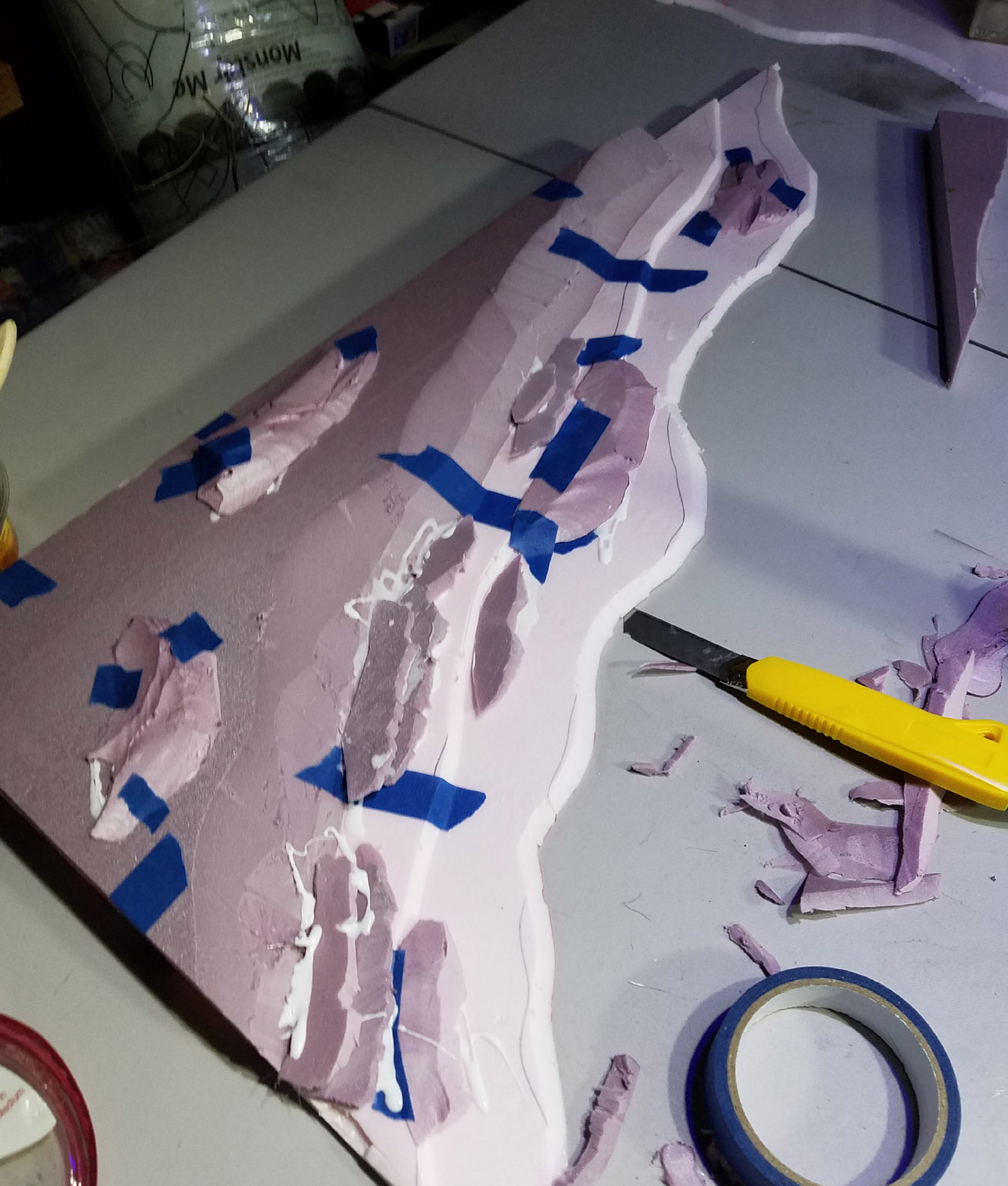 Plaster will be used to manipulate the shape of this hill section, and also provide some structural strength.  The idea is the make a sloping edge which will make it easier for miniatures to stand on the sloped parts.

The gentle slope should be fine for whole squads to march across or gun teams to set up.

If the plaster is mixed a little "drier", you can even sculpt a few additional shapes into the hill section.  However, the more plaster you add, the heavier your terrain piece will be! 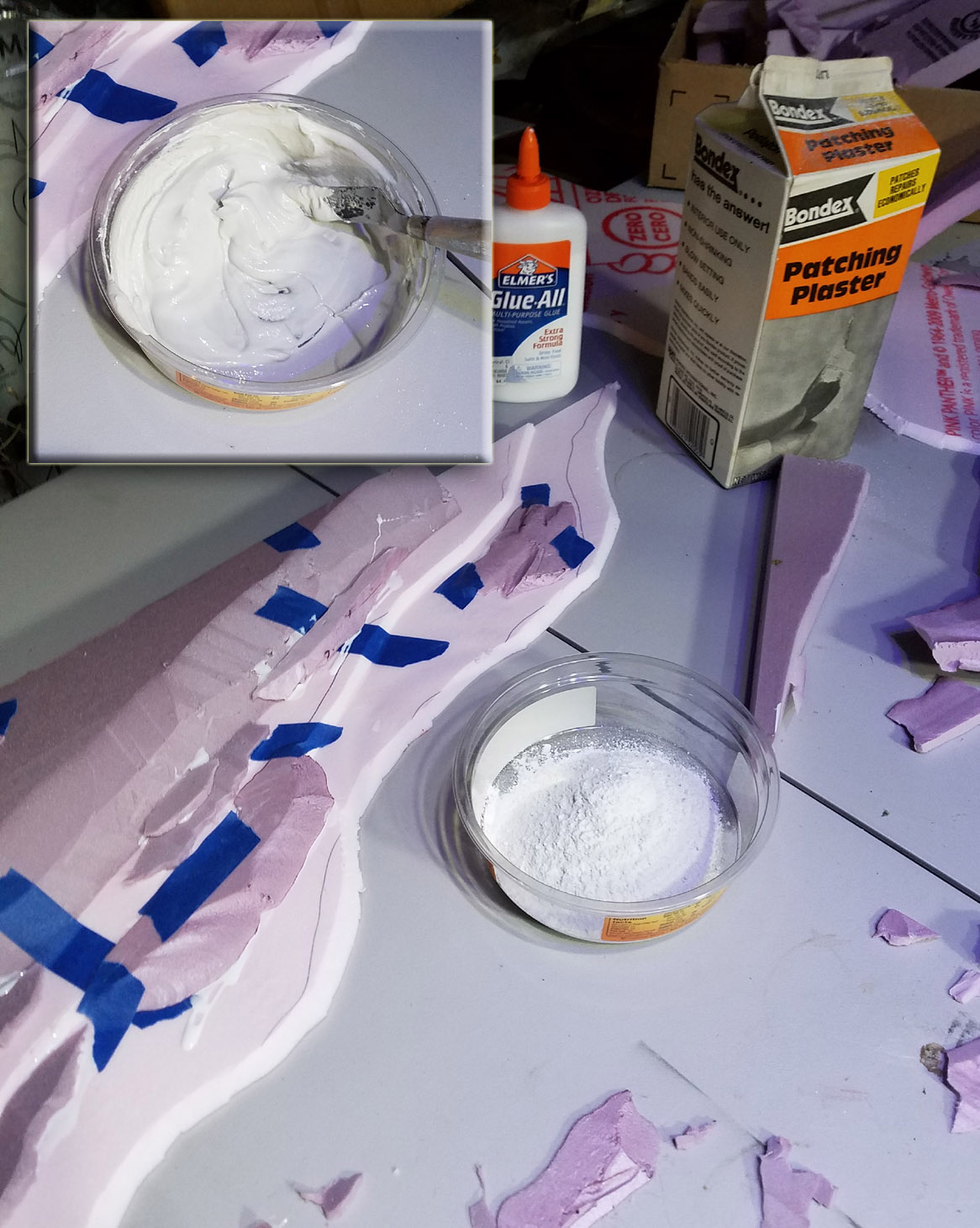 The plaster mix is roughly applied to the entire hill section with a palette knife, making sure that I leave those rocky outcroppings exposed.  Adding this plaster mix will fill in all the gaps around them, and make it seem as if they really are part of the hill, and overgrown. 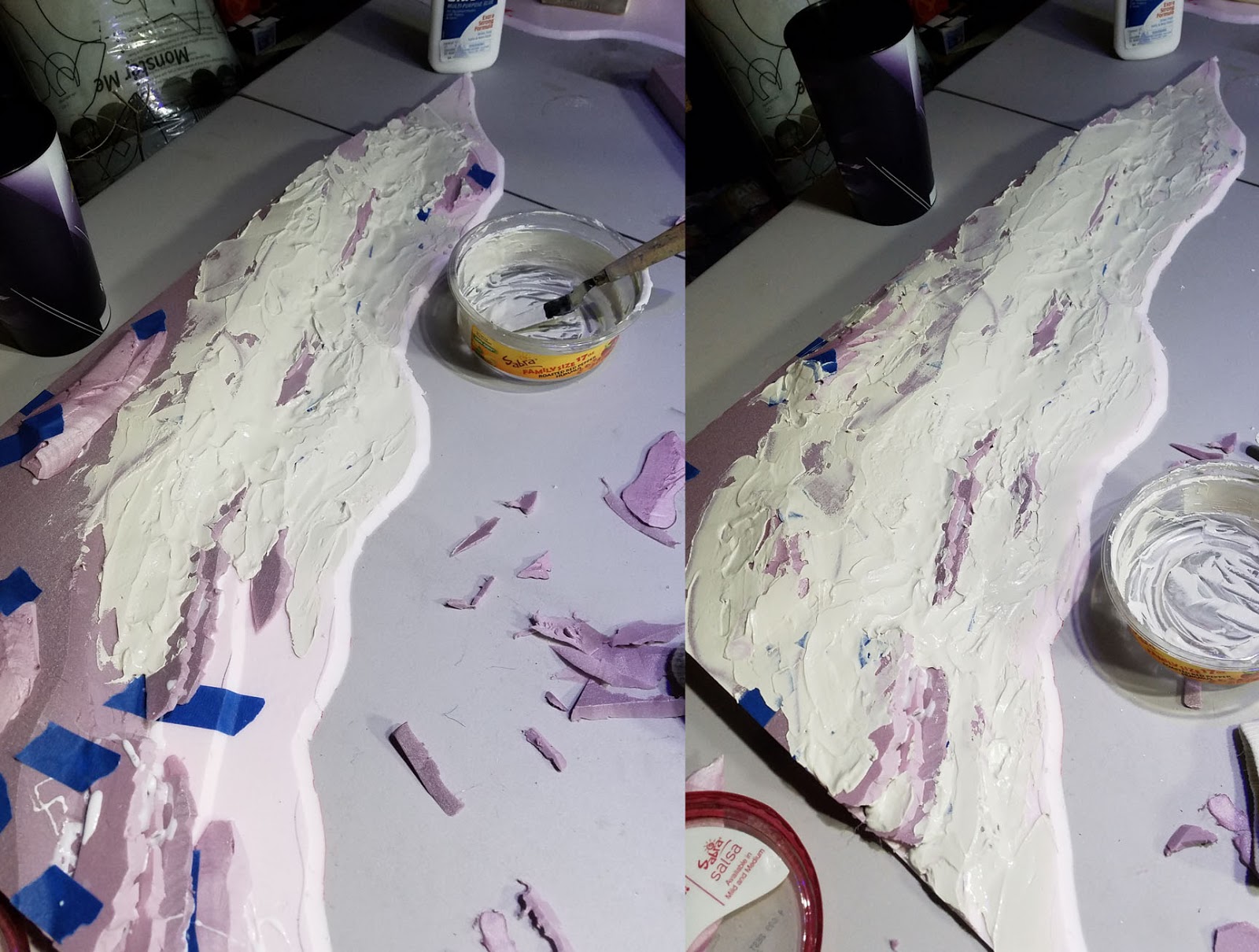 Pine trees are added, sticking the wire bottoms into the foam with some glue, making sure to leave room for infantry squads, gun teams and even vehicles.  Place them unevenly, pairing up a smaller tree with a bigger one, and then placing a mid size tree a little further away.

That is a better and more natural composition. 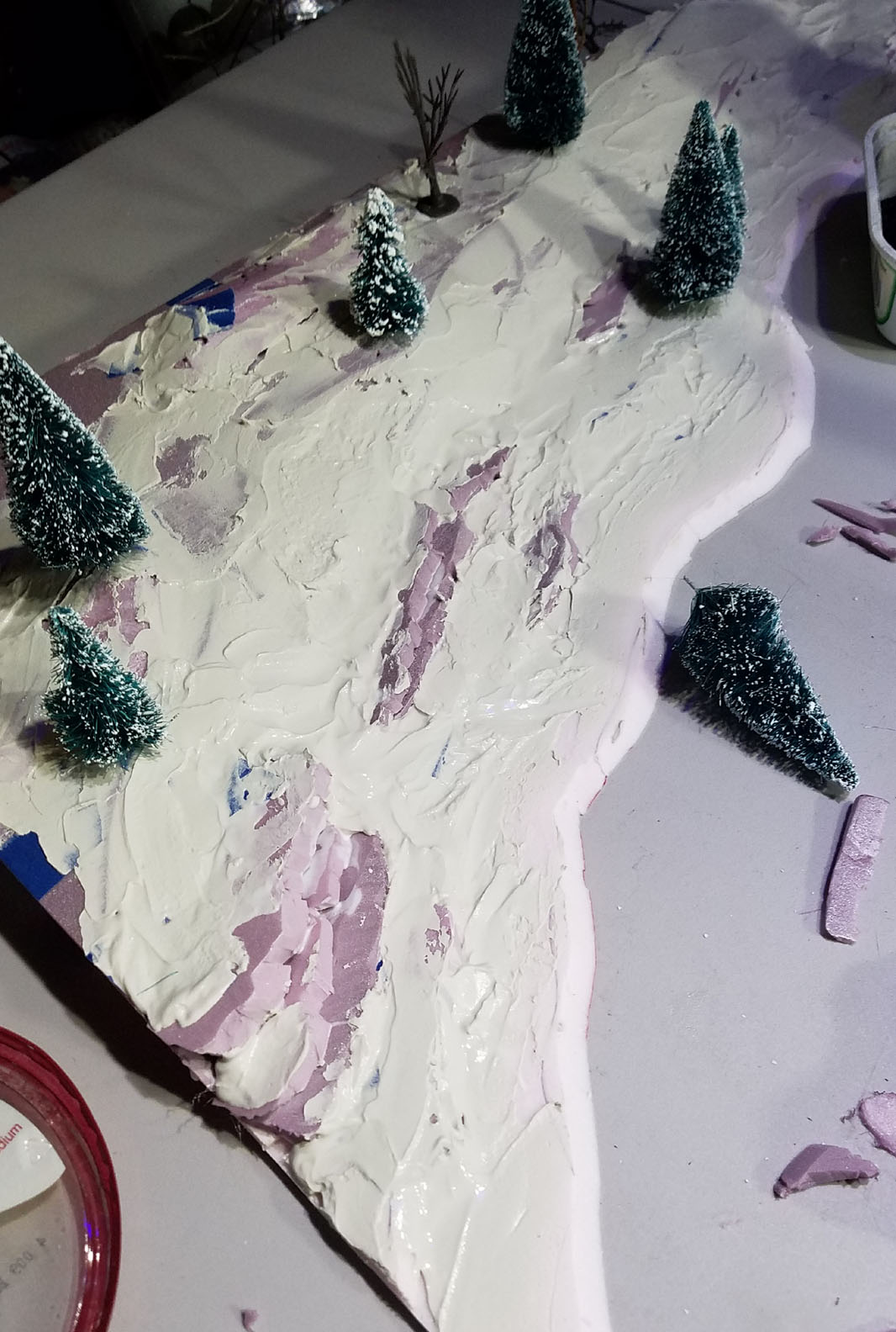 I set some logs into the wet plaster, which will both look more natural and provide a place for a smaller infantry squad or mortar team to be in hard cover. 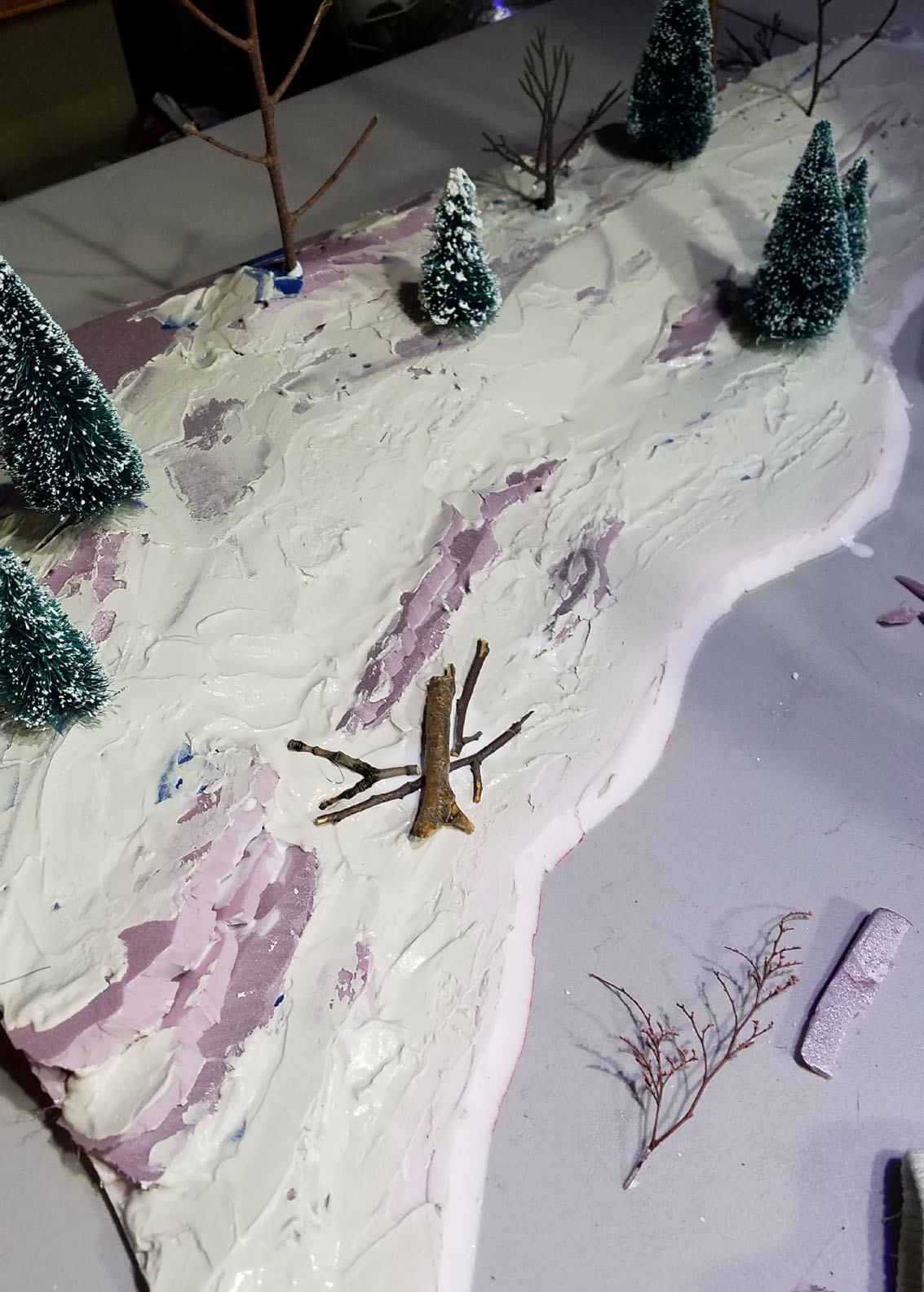 Using a wet brush mixed with glue, I brushed over the plaster as I did in part 1 to smooth it over.  The glue now provided a bonding surface for the leaves and gravel which were added in this step. 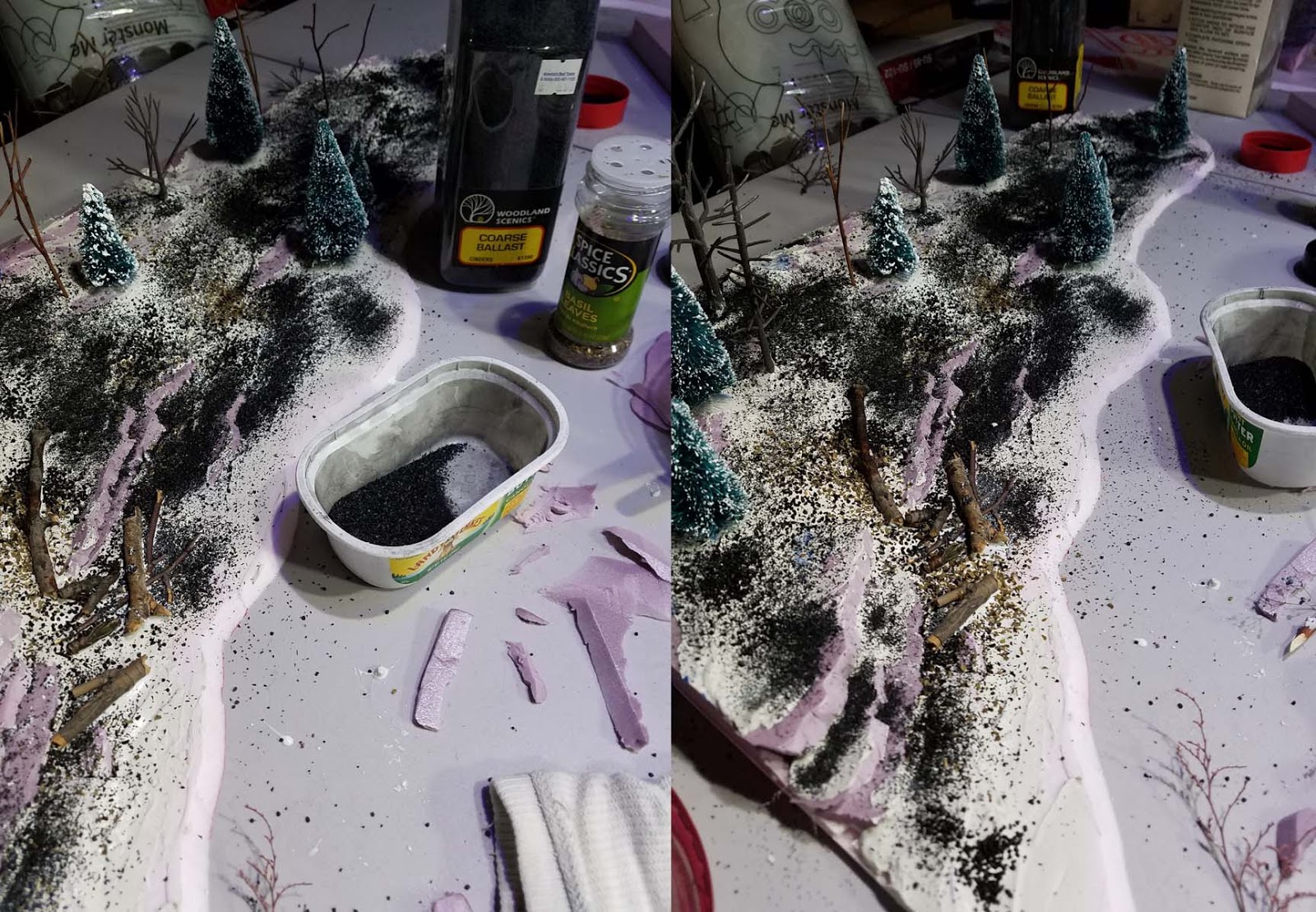 Now it's time to let this all dry, so that it can be painted, flocked and get its snow texture!

I will show you some images of the new winter tundra battle mat which I am attempting to match as I put these finishing touches on these first terrain pieces.

This is just the beginning, as there are many more experiments that I want to conduct with this board!  I also want to make frozen rivers and ponds, blast craters and defensive bunkers/trenches.

If it is possible to support the Patreon Page, it will give me more time to work on more of these terrain pieces that are so much fun!  That will also allow me to purchase more new materials for these experiments: 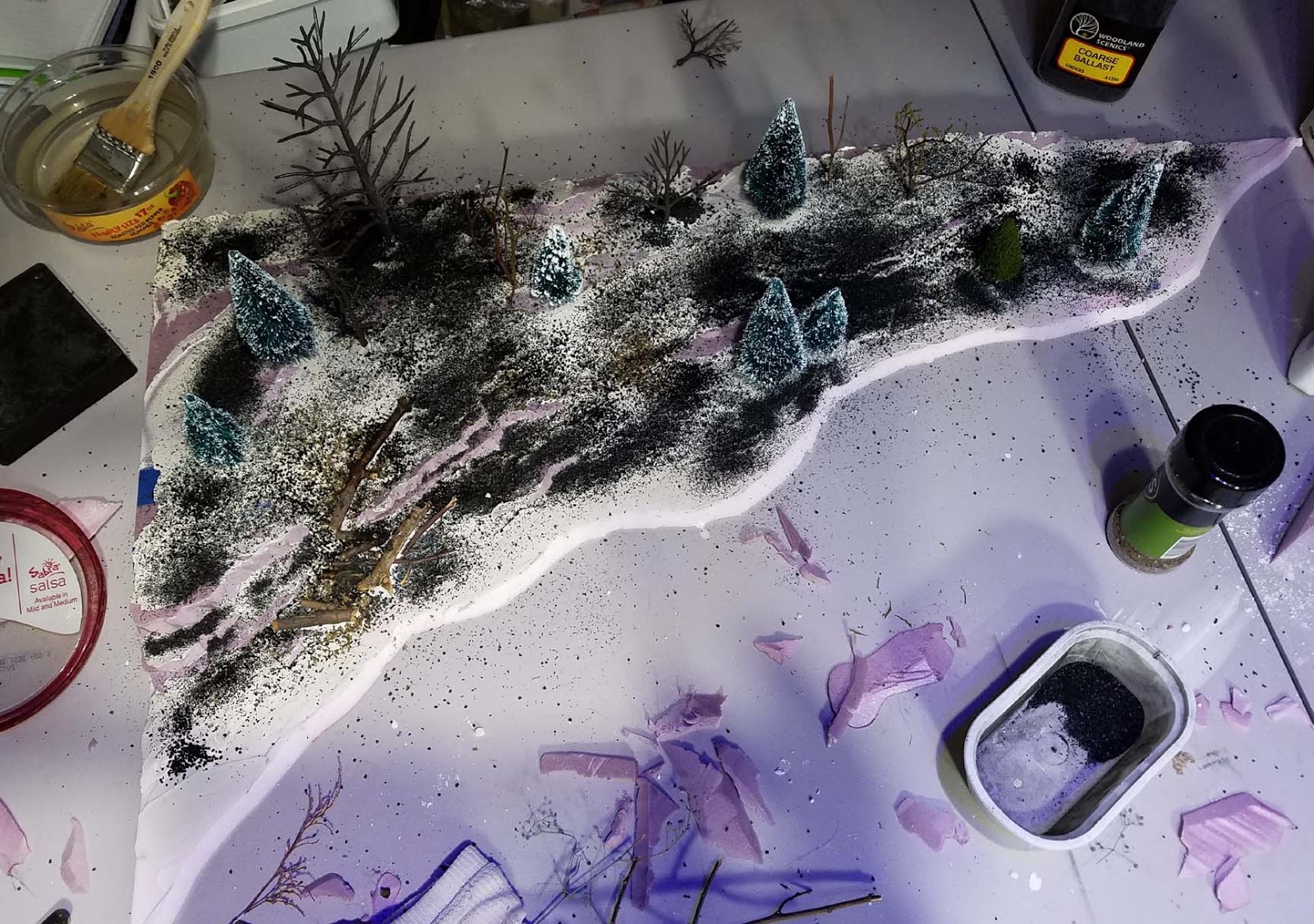 Posted by wappellious at 1:05 PM 2 comments: