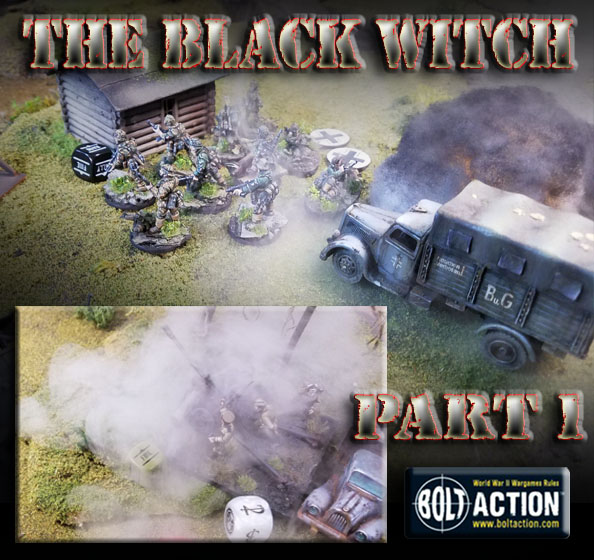 In the latest installment of our Barbarossa campaign, the fighting continues over the tiny village of the Island Church.  However, the objective has changed entirely!

No longer interested in the town itself (it has since been bypassed by the Wehrmacht armored columns!), an elite force of German troops must try to capture a downed Soviet pilot.  She is part of the Black Witches squadron, and she is known to be in the area. 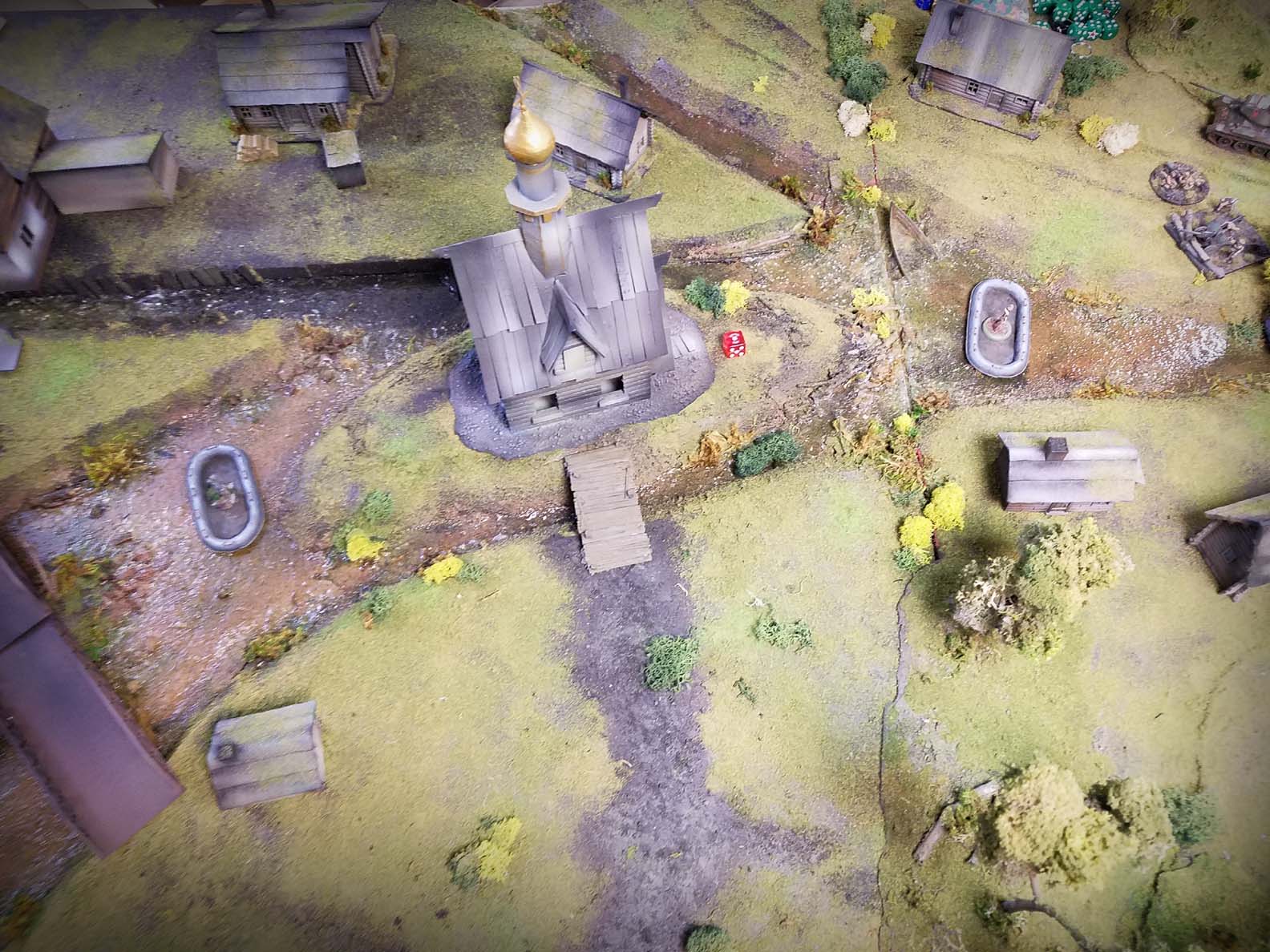 The Soviet forces are trying to rescue her before she is captured. This mission was deemed to be of such importance that a German officer and a recon unit of tanks was sent in to find her.  Those vehicles had been knocked out by growing Partisan activity, and he finds himself stranded in enemy territory! 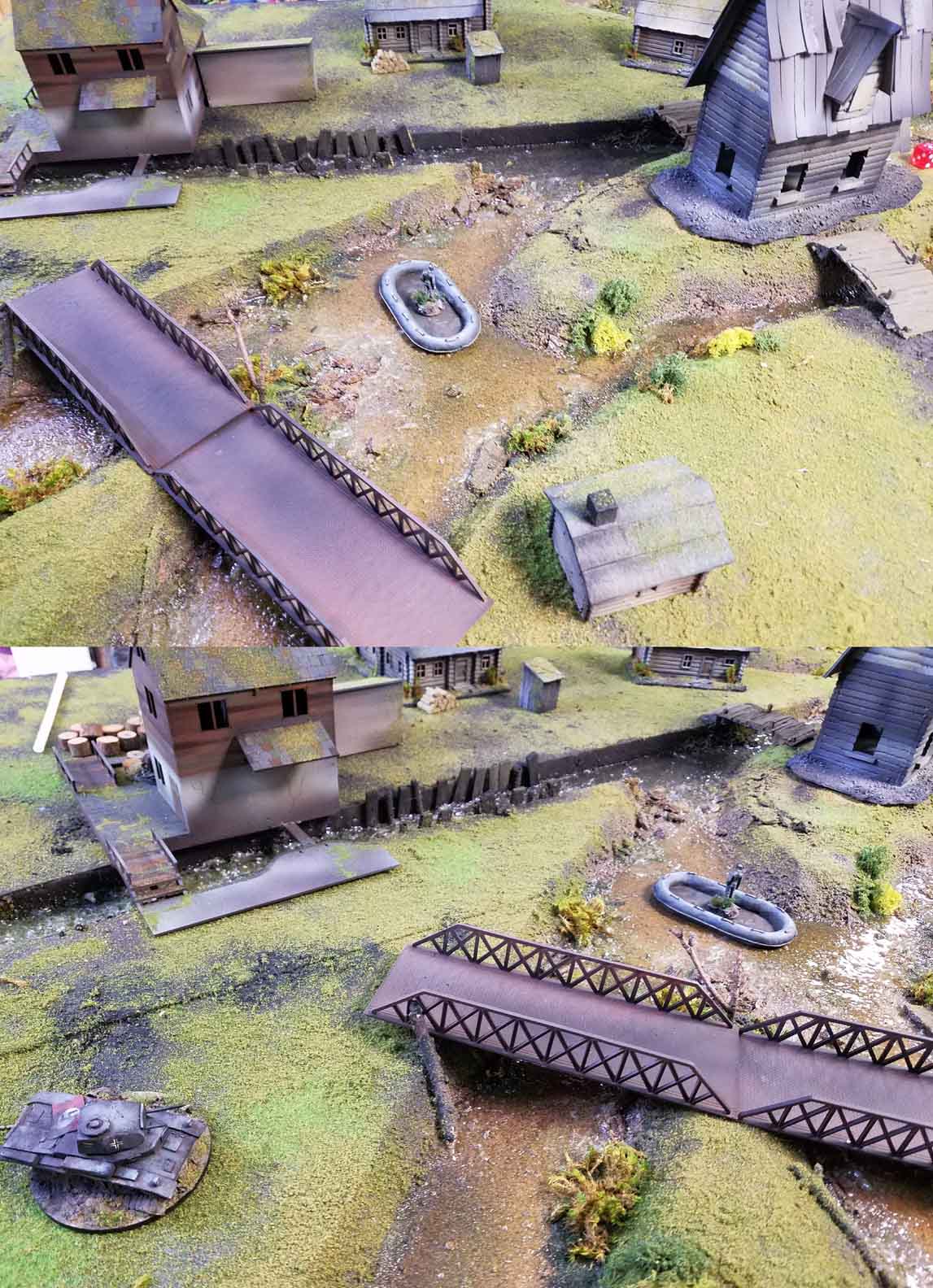 It is anticipated that this mission will be very difficult, so the hardiest of Waffen SS units will be tasked with recovering the stranded officer and capturing the enemy pilot.  They are few in number, but it is thought that they could slip back into the town less noticeably than a larger force of regular army. 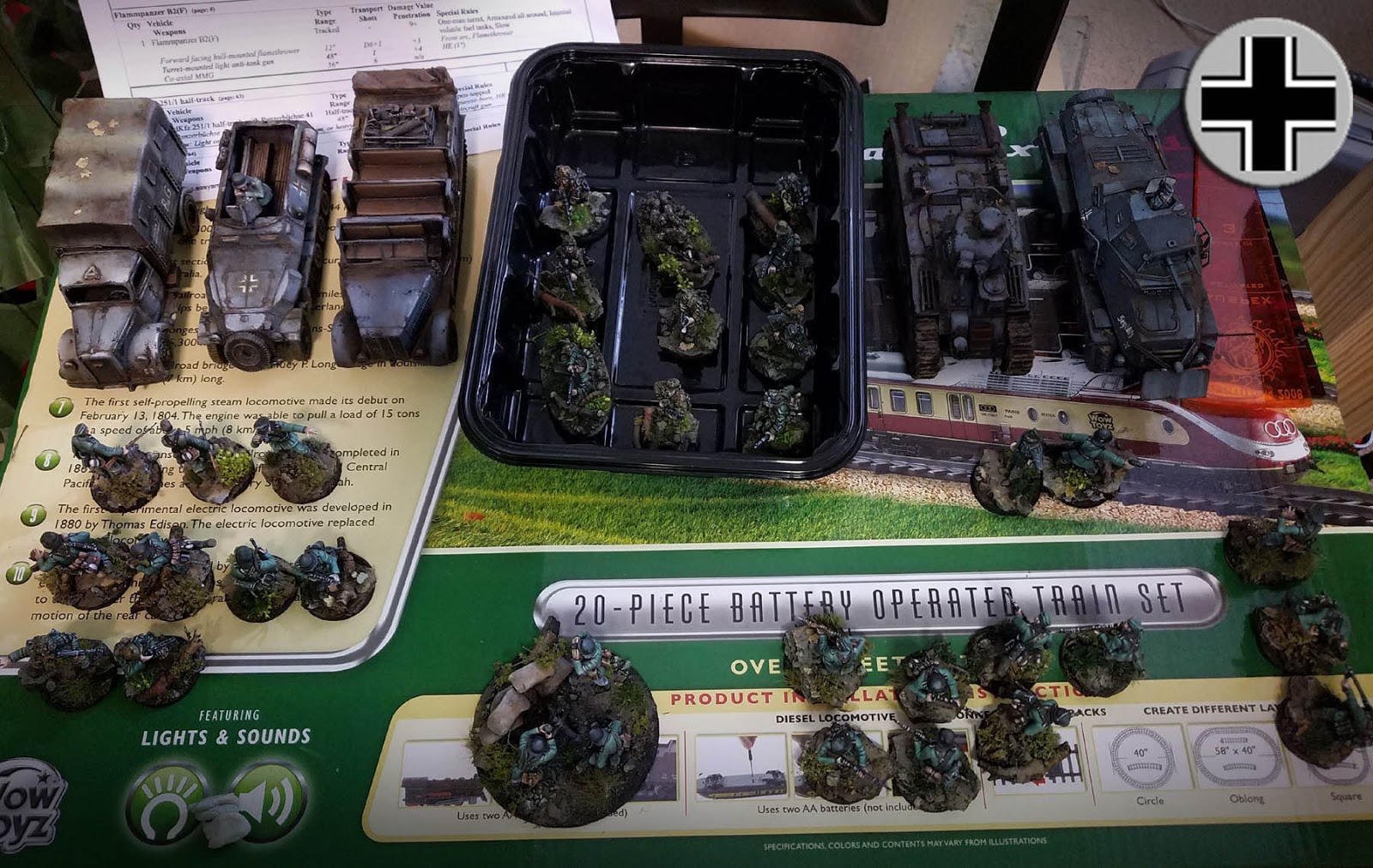 Some new reinforcements have arrived in the town, among them Siberian veterans. 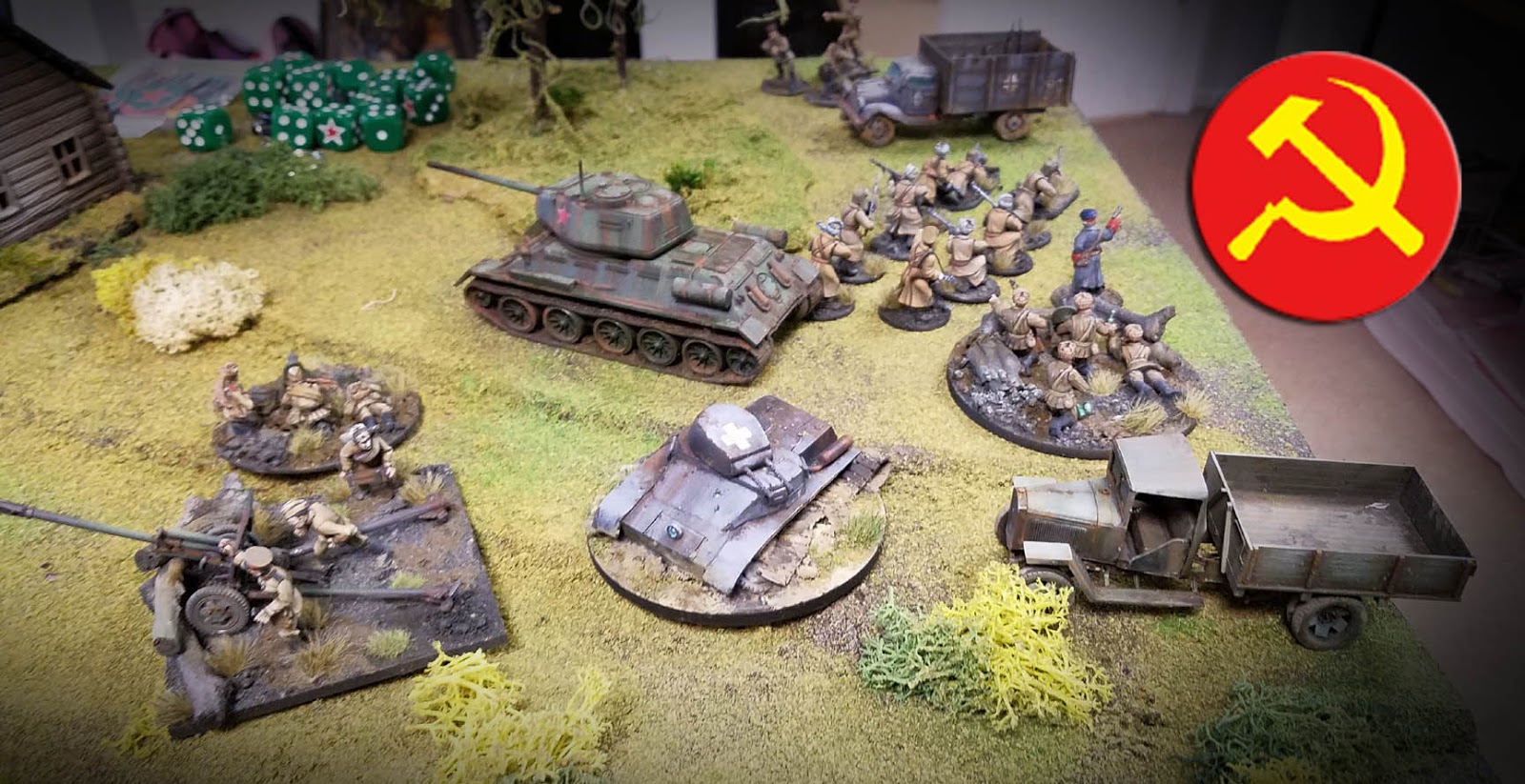 The terrain was far less ideal for the German deployment, as they were now attacking from the opposite side of town.  Not long ago, this had been a Soviet deployment zone...

The wheeled vehicles would find it rough going, which meant that the deployment areas were even further restricted. 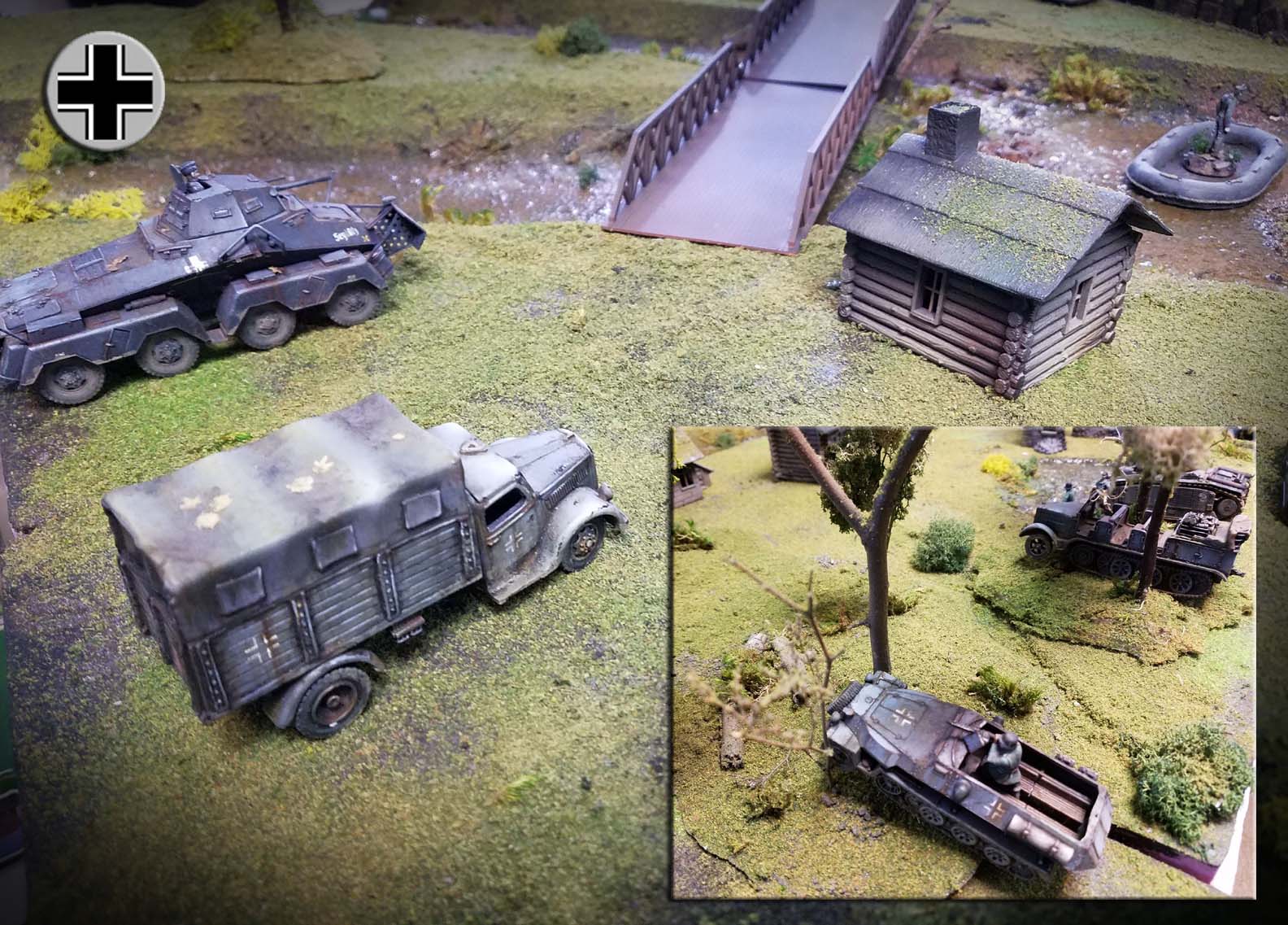 These Russian villages seem to be ideal for the defense, with each log cabin and shack presenting an excellent hiding place.

The Red Army already has the stranded German officer in their sights.  Obviously the T-34 which knocked out the lighter Panzers in the previous engagement is still hiding in its lair... 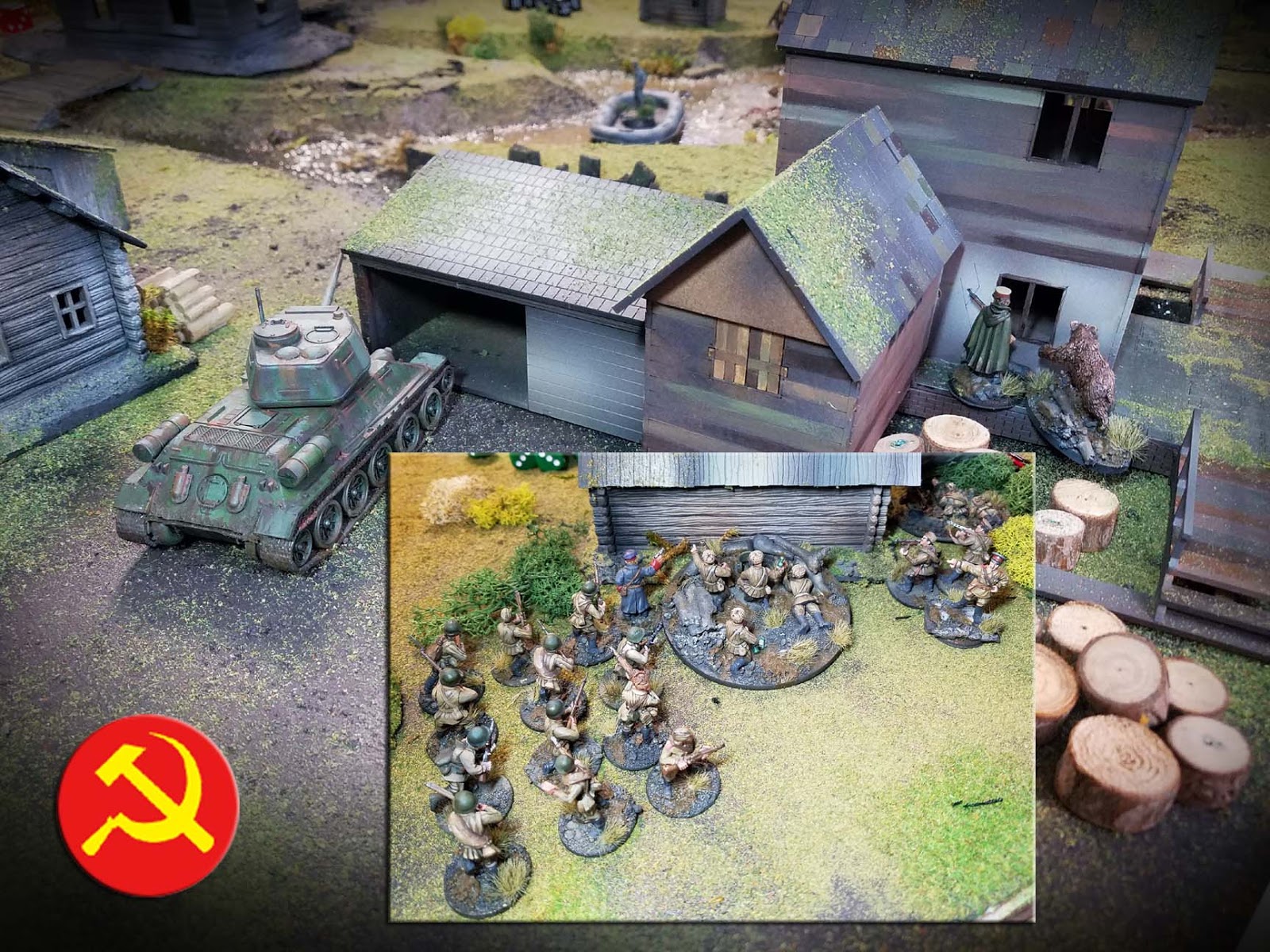 Somehow this small but determined group of German soliders must hold off these advancing hordes and rescue the surviving crews of the knocked out tanks!

As usual, the Soviets slog through the gullys and streams to hide from the Axis firepower.  One of the Black Witches is in view, attempting to paddle to safety in one of the discarded German rubber boats. 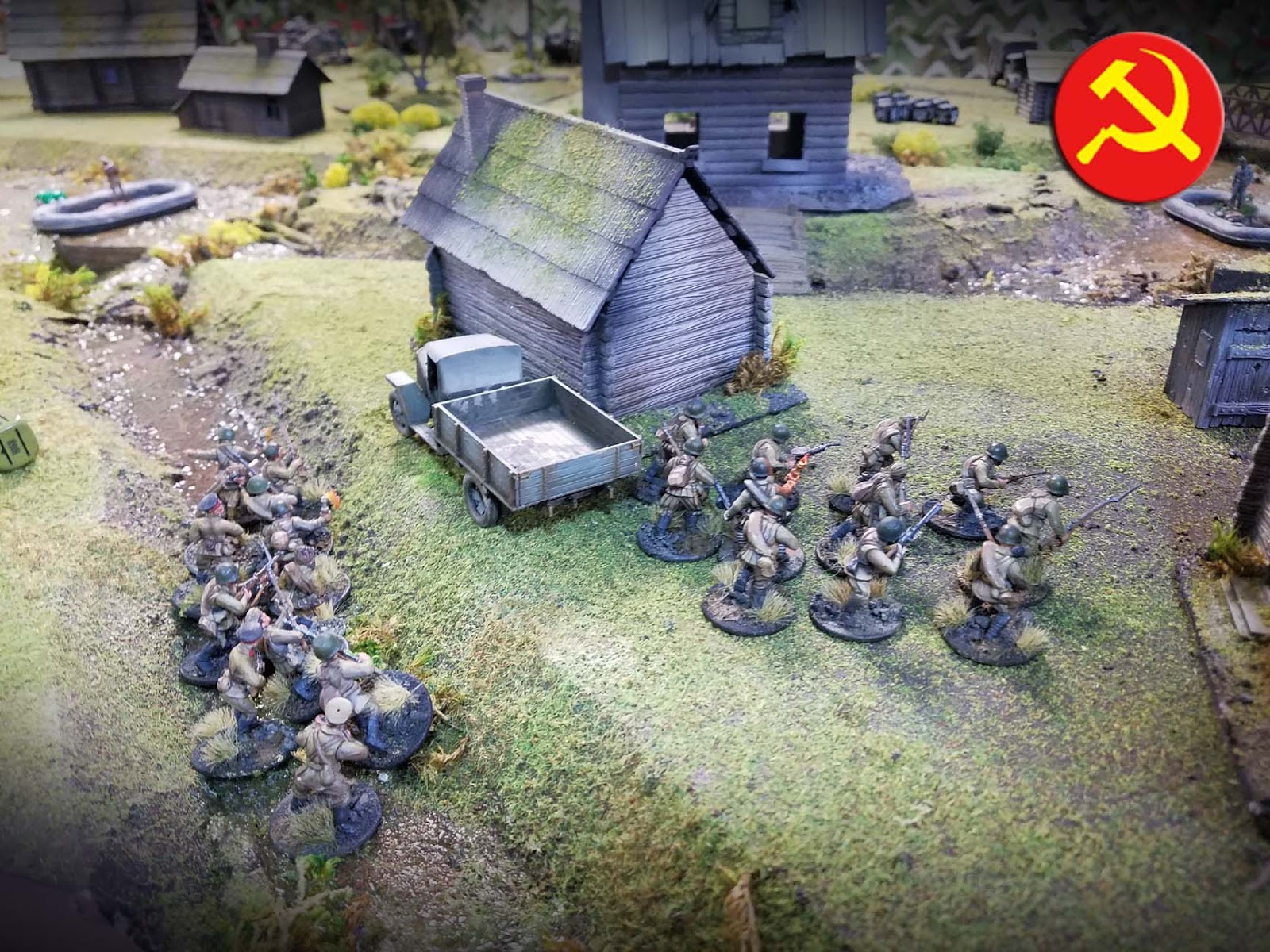 A Zis field gun has been brought in to cover the troops, and it claims a victim on its very first shot!  The Opel Blitz goes up in flames, and the Waffen SS passengers must bail out  to avoid burning to death themselves.

They attempt to take cover behind the tiny bridge house, but the deadly sniper Sletlana is waiting for them in the top floor of the lumber mill. 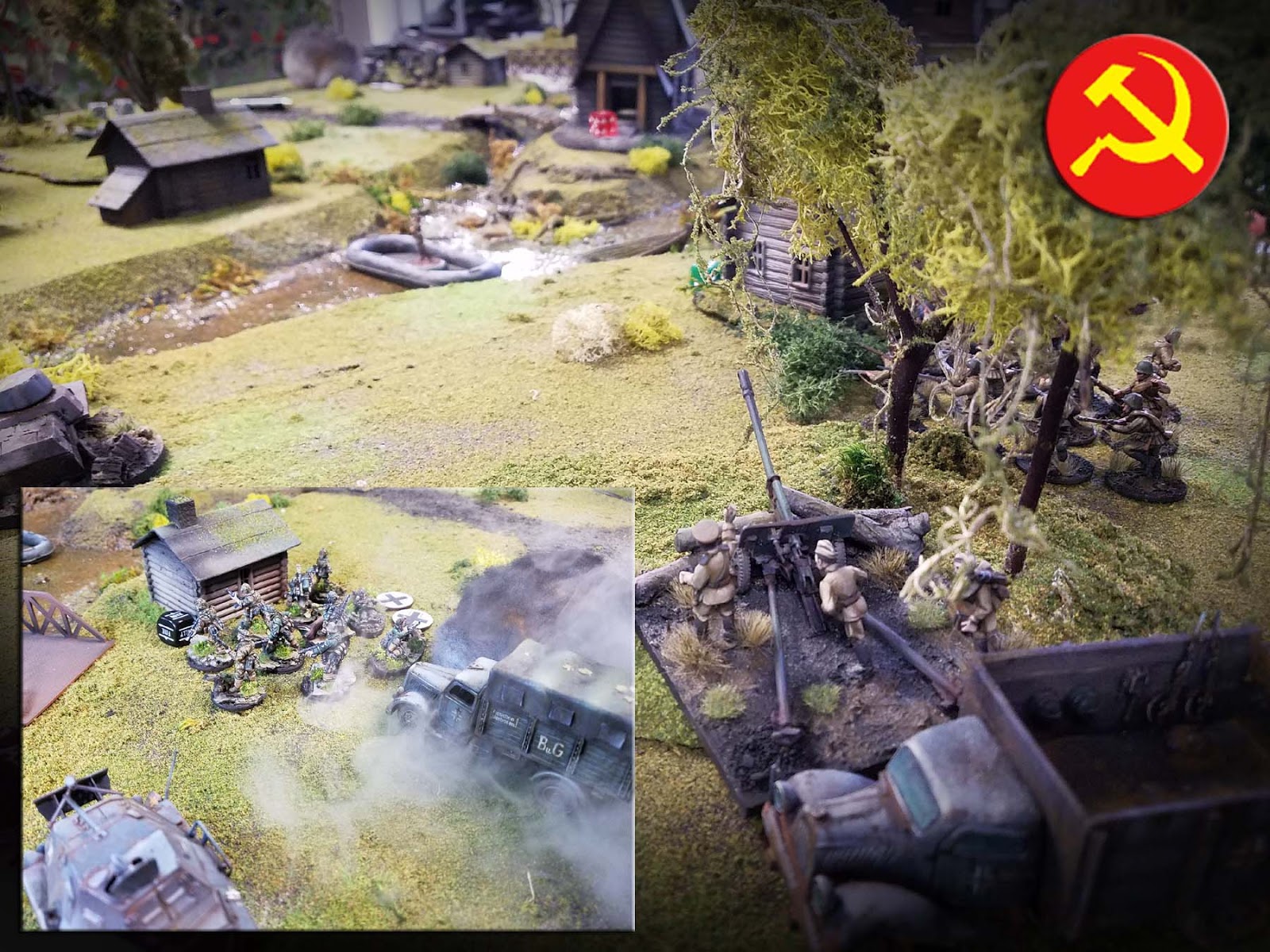 The flame and smoke unleashed by the Zis gun must have betrayed their position, making it easy for the mortar observer to direct a well placed shot into their midst.  Even with Great Patriotic War, what remained of the crew chose to flee the field. 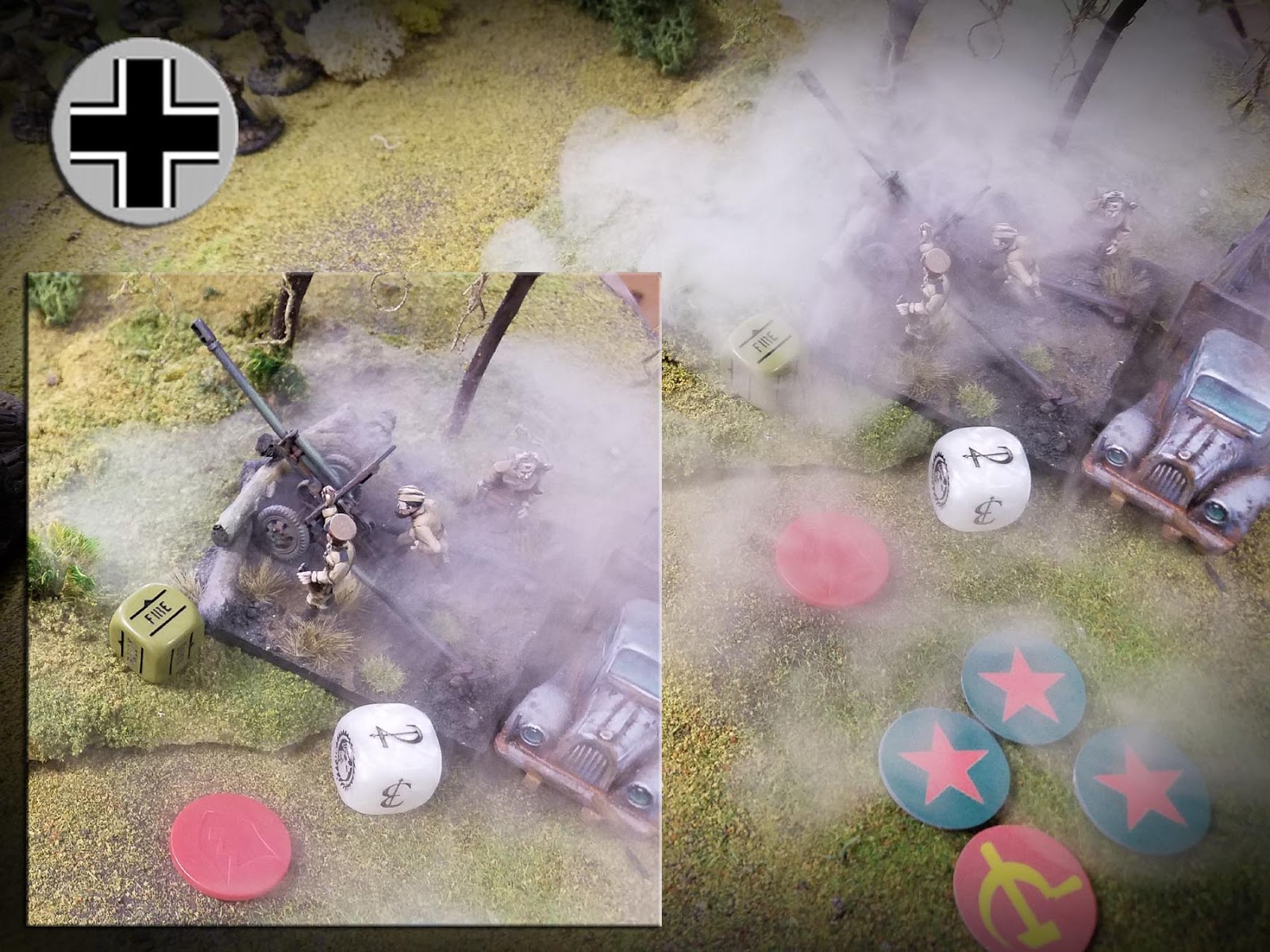 With the threat of the direct howitzer shot now gone, and the potential for the mortar to deal with the machine gun teams in the nearby building, the veteran Heer unit surged towards the river, and the Black Witch pilot. 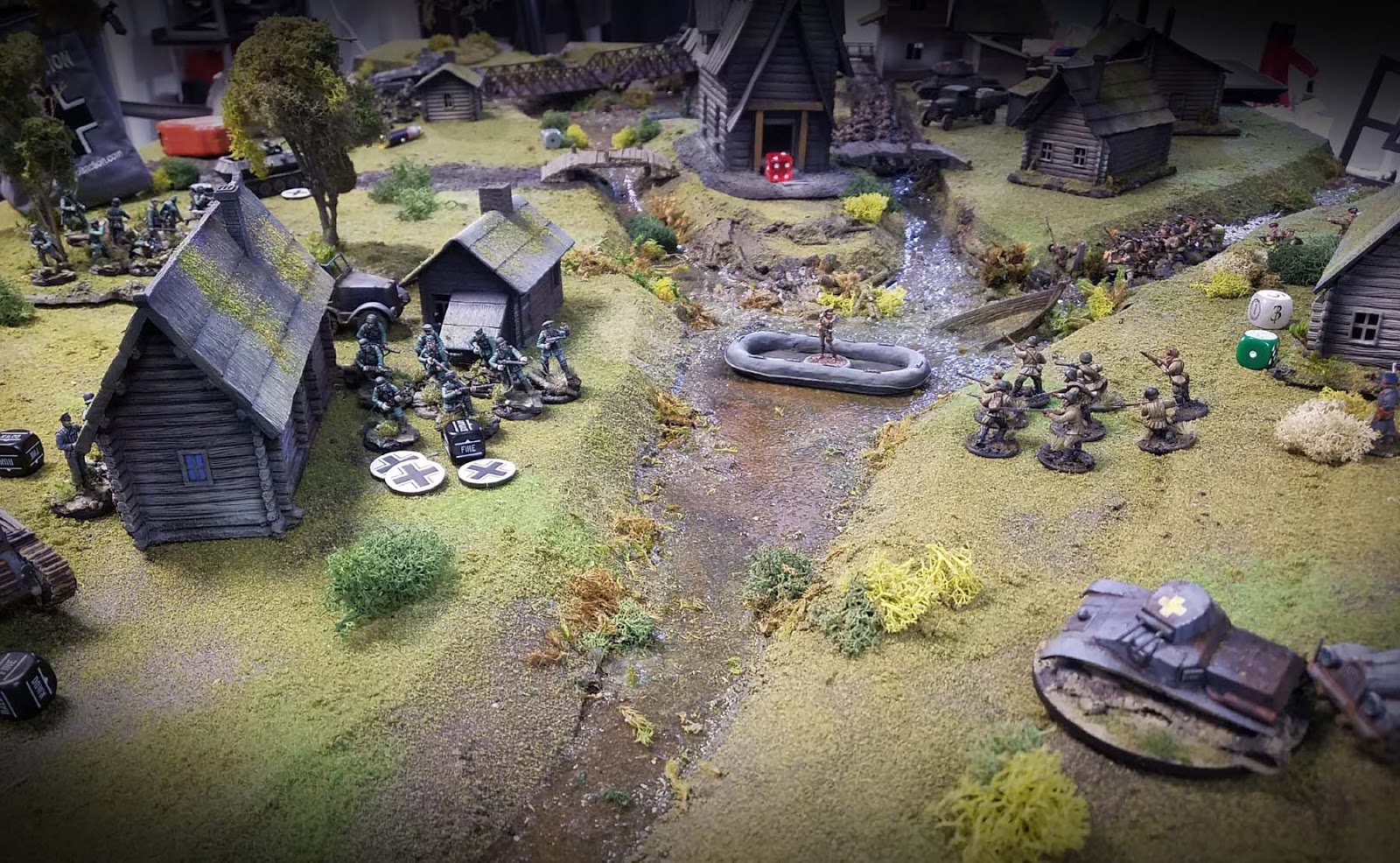 Perhaps this is why the shattered Zis crew chose to exit the stage... the rumbling of the Flammpanzer!!! 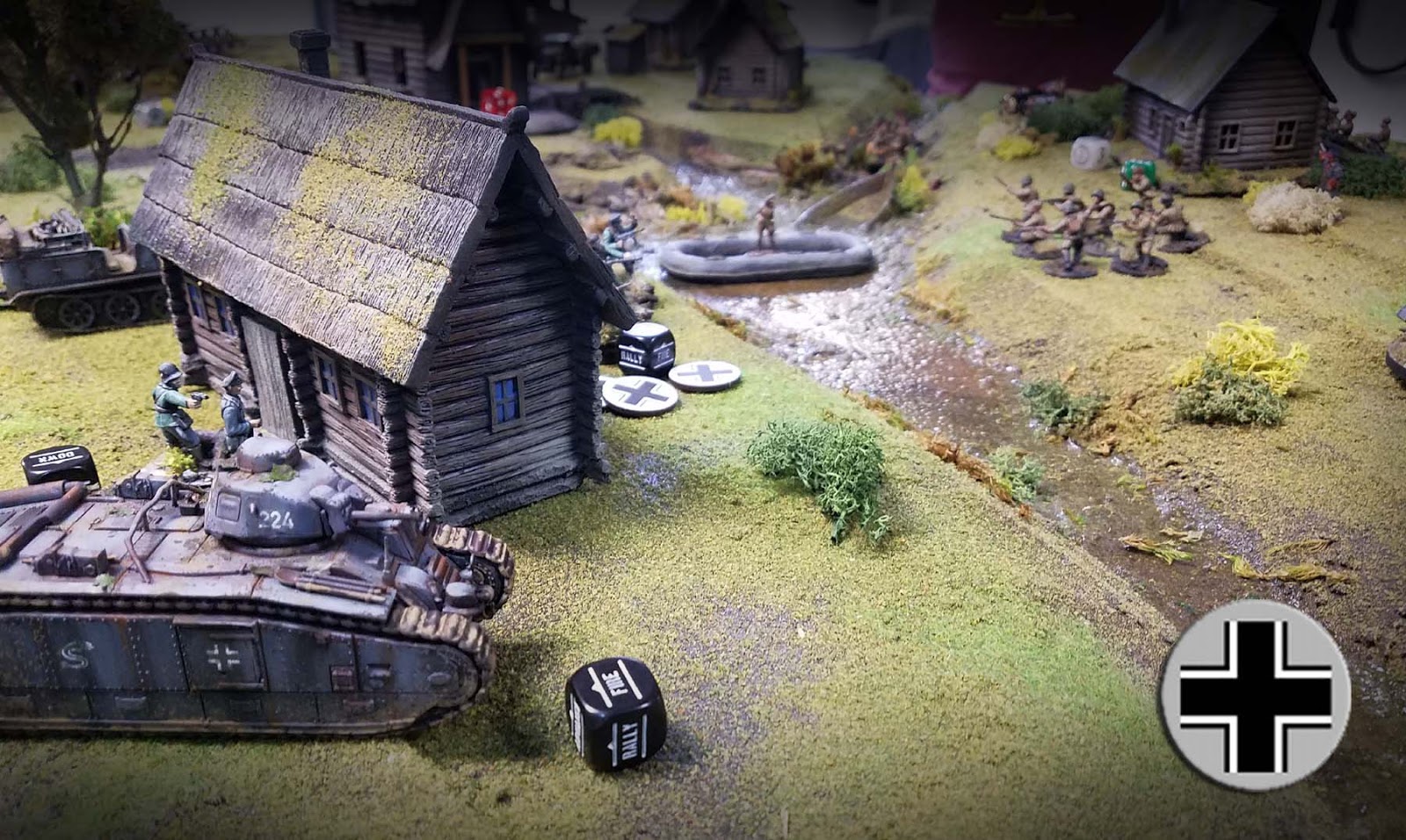 As we have seen all to often on the Ostfront, the hapless 'free' squad of raw recruits is directed toward the enemy as cannon fodder.  With the new Commissar Royanovich nearby, they had little choice but to move into the teeth of enemy fire.

This covered the advance of the regular units of the Red Army, but on the right flank, they chose to hold their ground and let their own superior firepower deal with the scattered Waffen units.

They were being whittled down by the sniper, who managed to take out both light machine guns.  This would mean a nearly free hand for the Russians to clam the wreck and the captured officer. 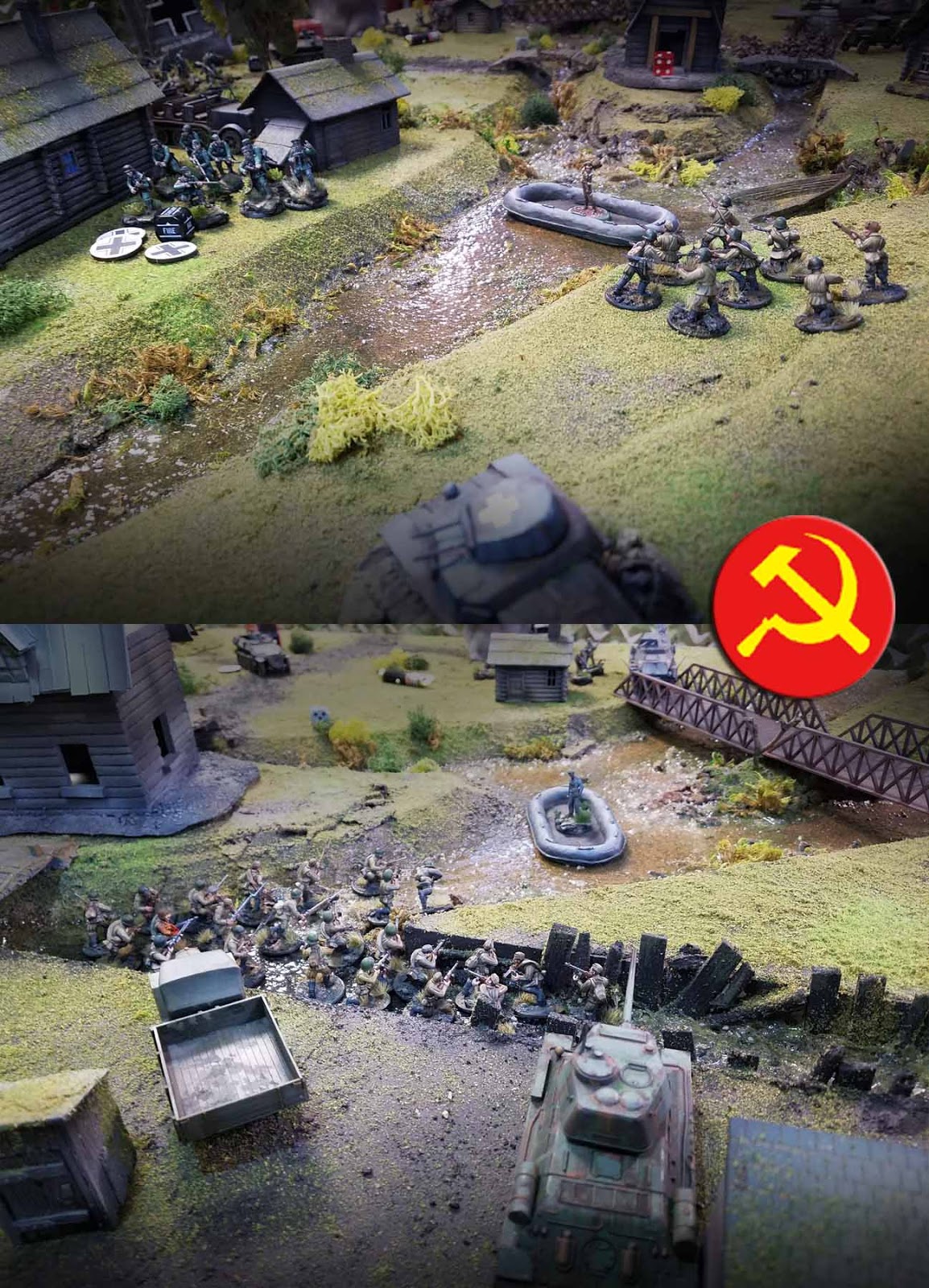 Seeing this threat, the Rad 8 chose to risk the hazard of the T-34 and fire its autocannon into the mass of Soviet troops hiding in the stream.  Apparently the water makes for some great cover, and the shots nearly always missed. 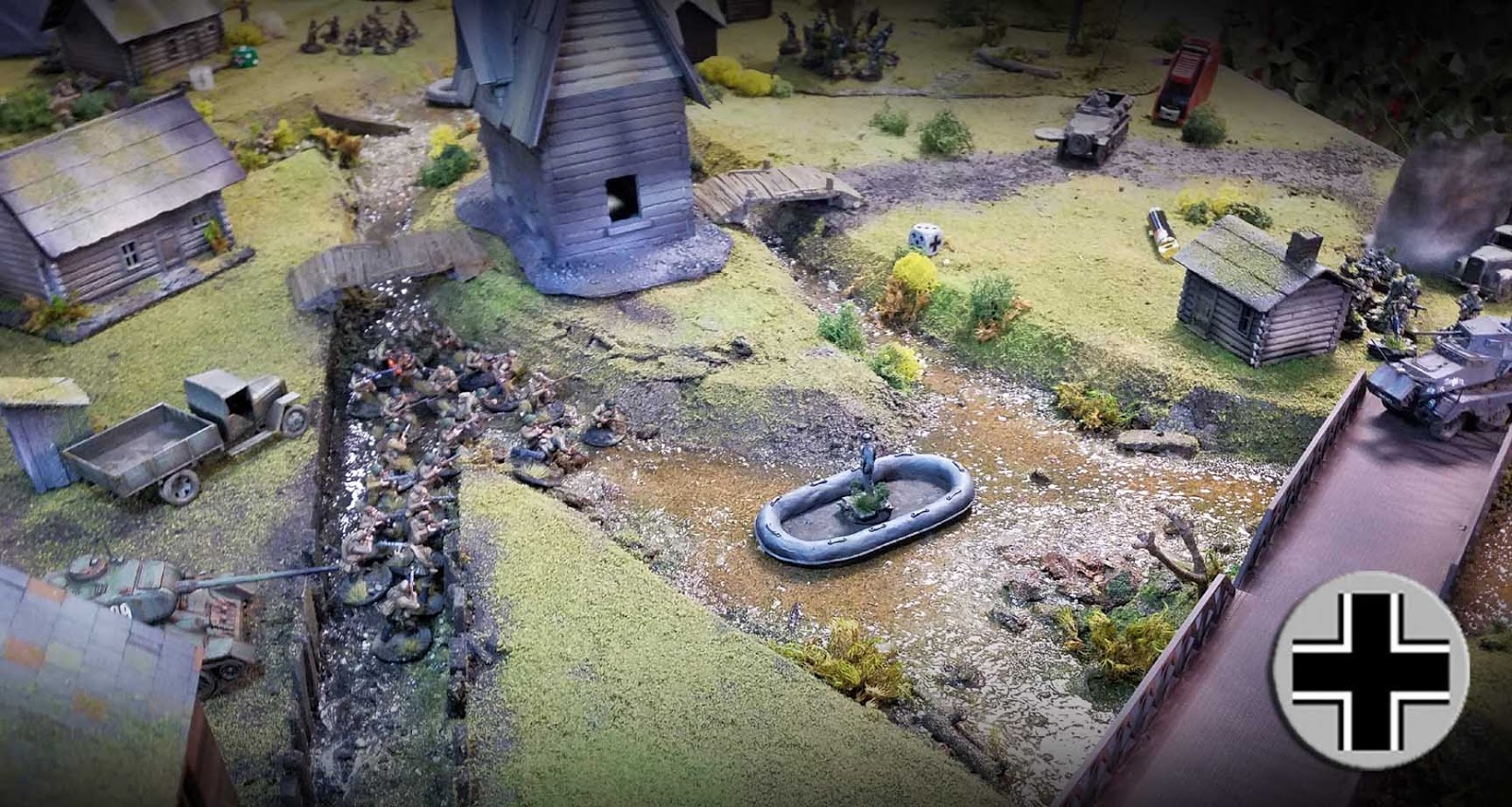 The Red Hordes close in on their primary objective... rescuing their heroic pilot.  Will they bring her back to the aerodrome for more heroics, or can the elite of the Wehrmacht manage to fend off an army twice their number?

They have a few surprises for their enemy, so we shall see what happens in episode two!  Stay tuned...

Also, if you want to see video battle reports, you can check out my France 1940 videos on my YouTube Channel.  I have 4 of them posted already!  Here's a link: 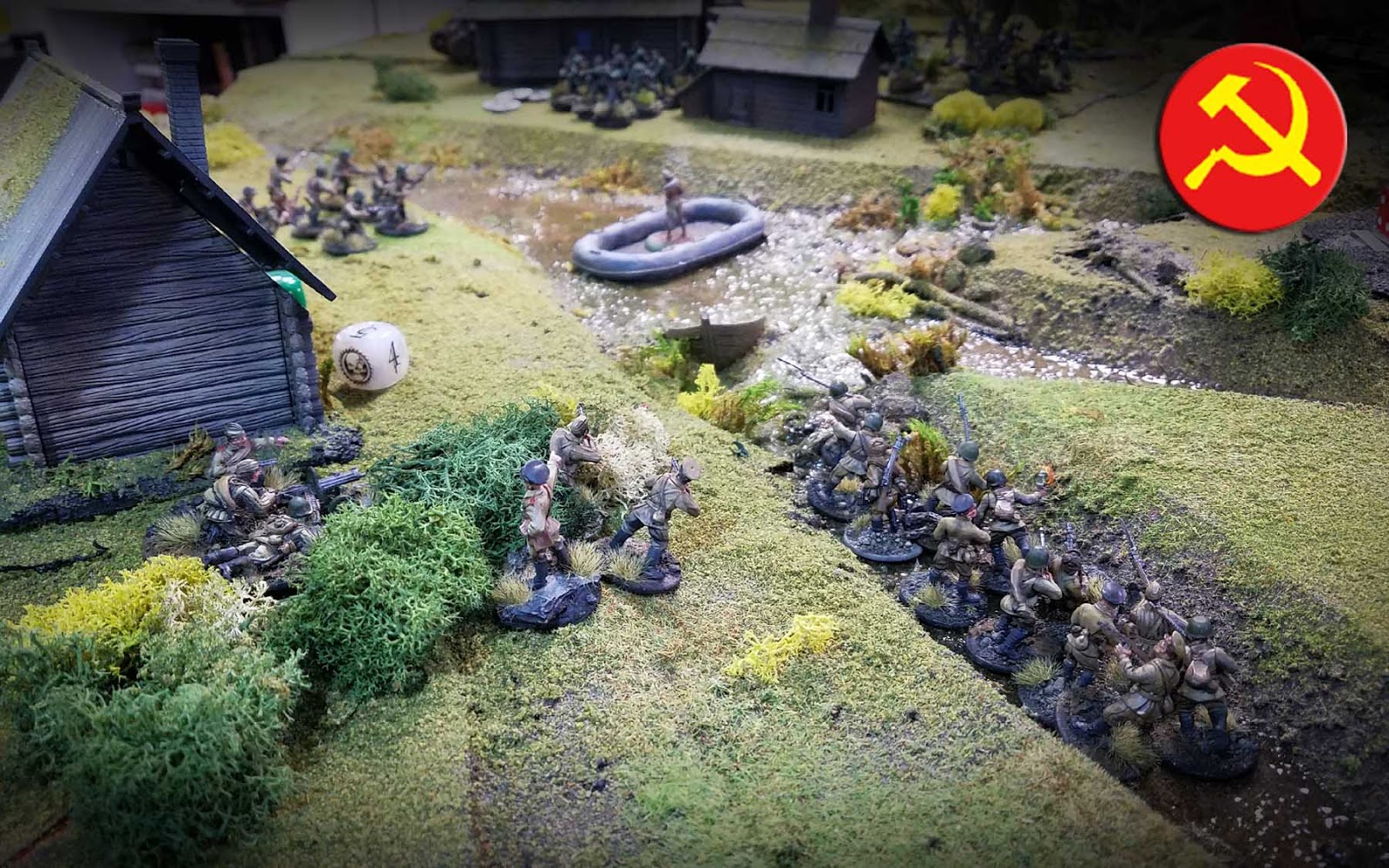 Posted by wappellious at 1:25 PM 2 comments: