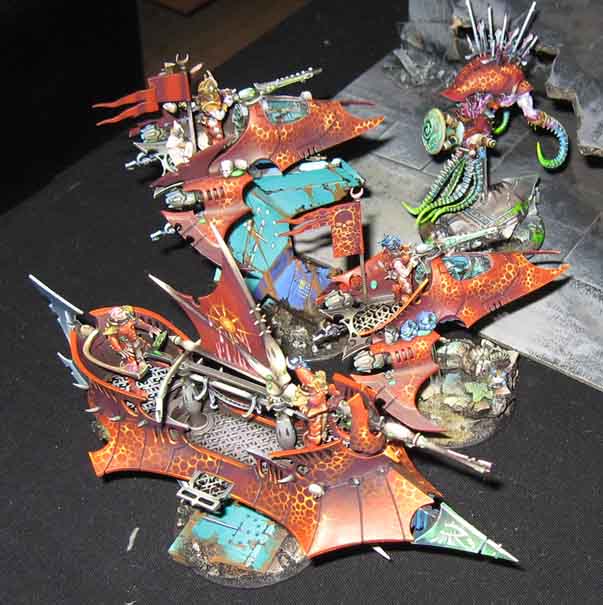 Well, this was another part of my 6th edition education.  We have tried to do various scenarios, missions, setups, etc., to get as much of the basic rules as possible.  It really has been basic, learning the warlord traits thing, the crazy objectives, so on and so forth.

It has not been the easiest of educations, especially trying to learn a whole new army at the same time.

For the most part, I hold as much of my stuff in reserve as I can.  This was my policy after having most  the army destroyed before my first turn, even though it was all either hidden completely or in cover.

In this instance, I had a warlord trait which let me choose night fighting on the first turn.  I thought it might be an advantage for me, given the aptitude of the Dark Eldar for such things, but that did not work out the way I thought it would.

I have the Archons venom, another venome with a unit of Wyches, the Cronos, and the Grotesque raider hidden to start the game.  The Cronos has either been shot down early or remained hidden for the entire game.  The idea of it passing out paint tokens like candy has not even come close to working out in any of the previous games. 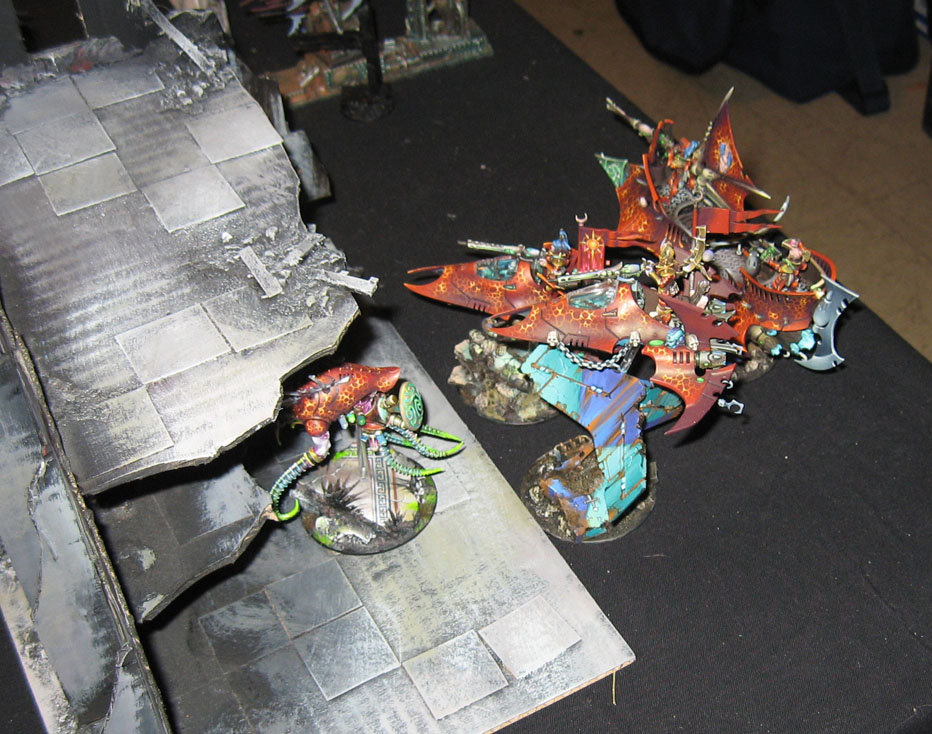 I put the ravagers out there to begin as well, since being in cover, with night fight and skilled rider should help them survive! 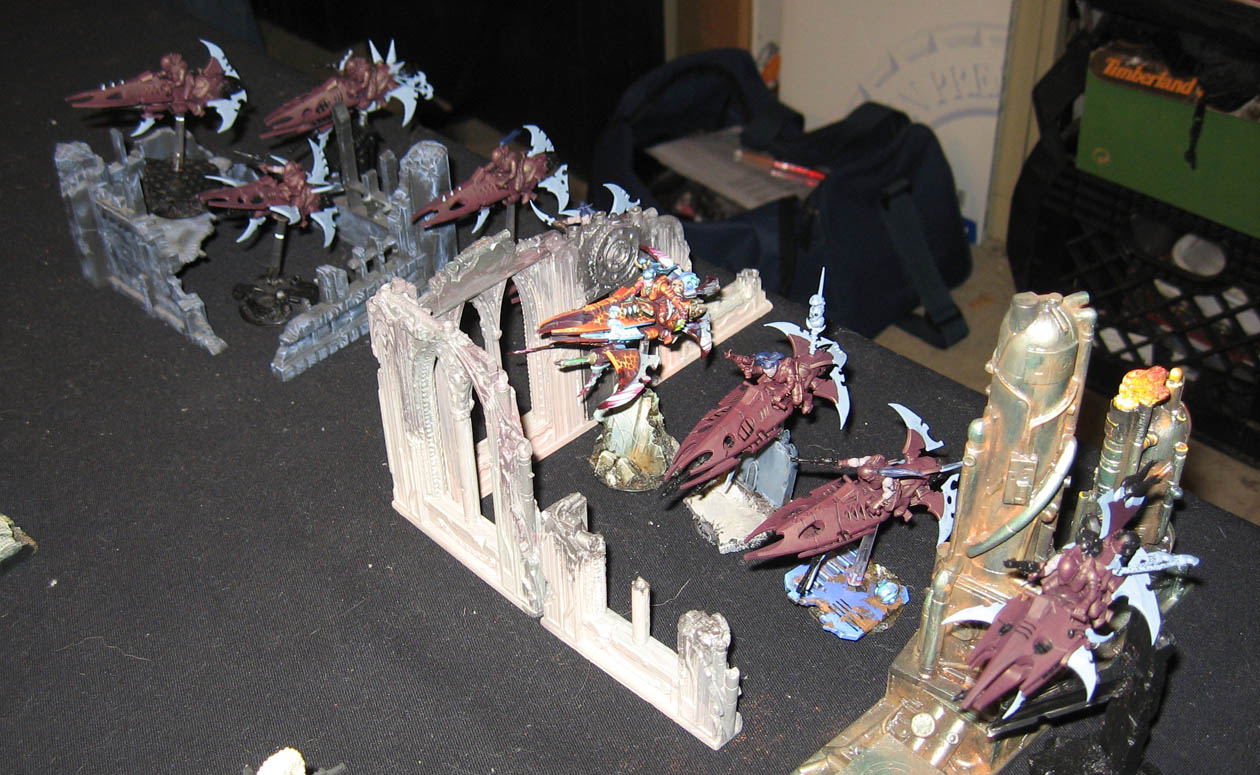 The Kabal warriors took up residence in a fortification, and I hid the last venom over there as well. 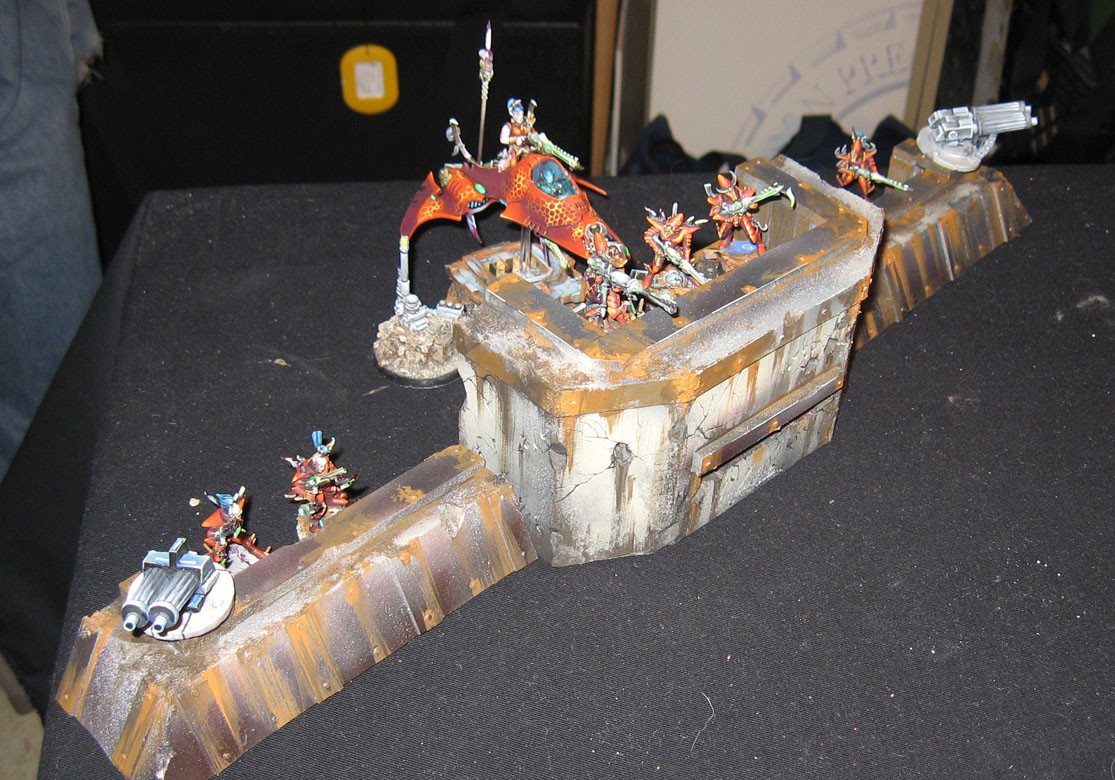 As it turned out, I might have been better served to leave these guys where they were... 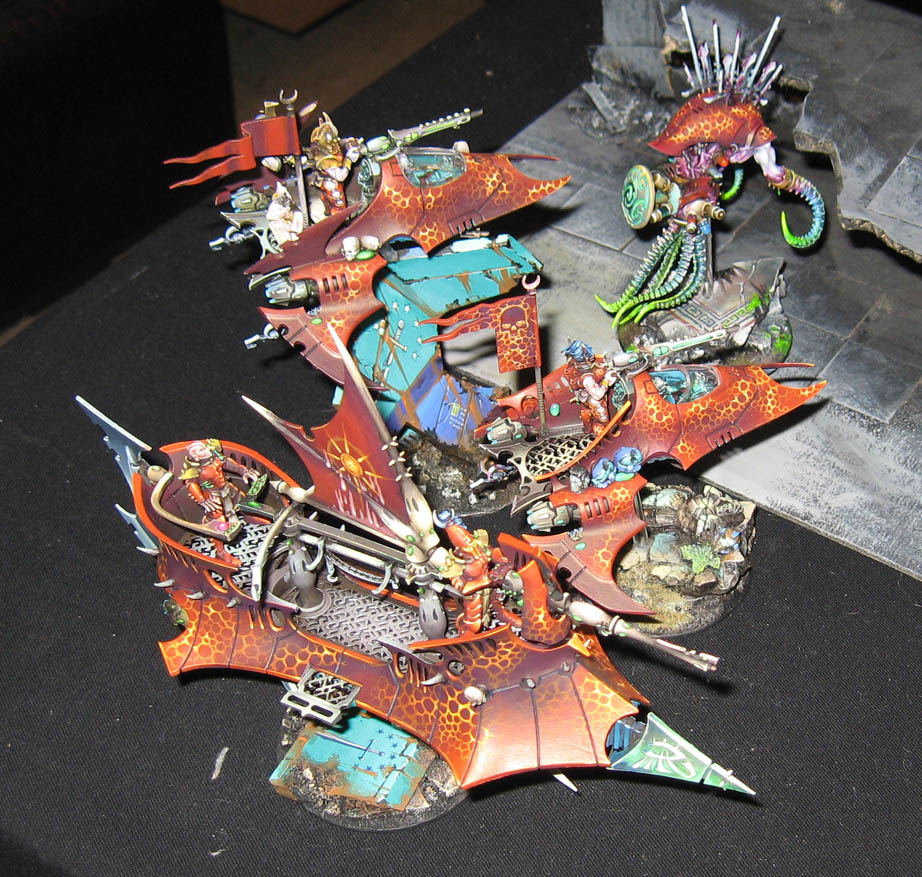 Now we see the opponent.  A CSM army led by Kharn, with lots of Khorne marines, a Forgefiend and a Hell Drake. 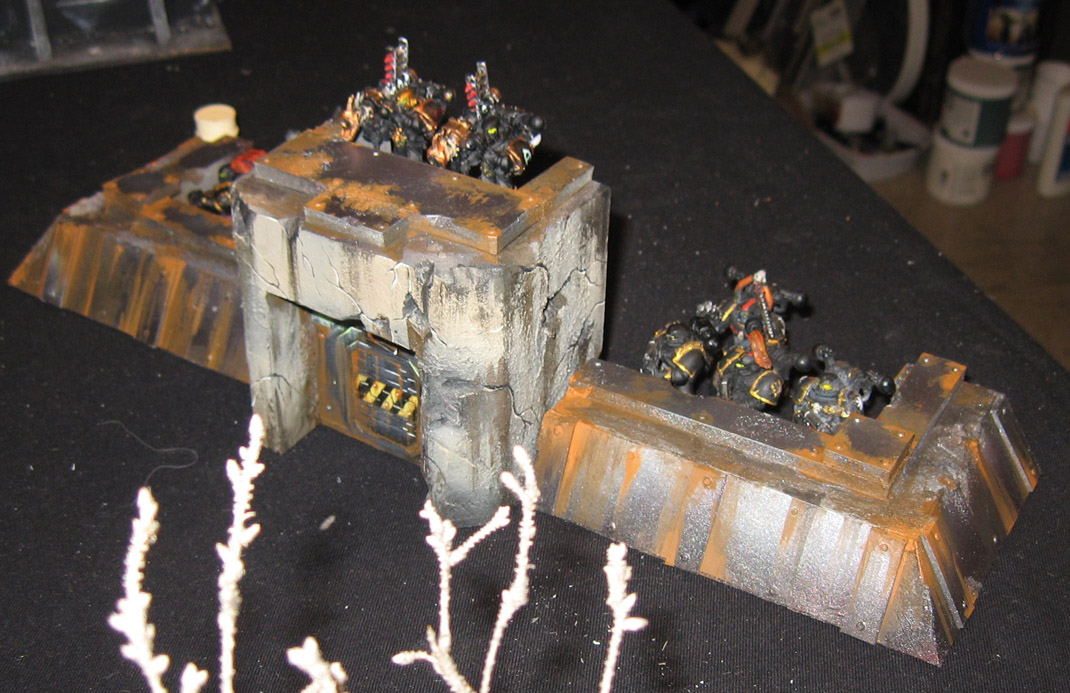 You can see most of the rest of them here... 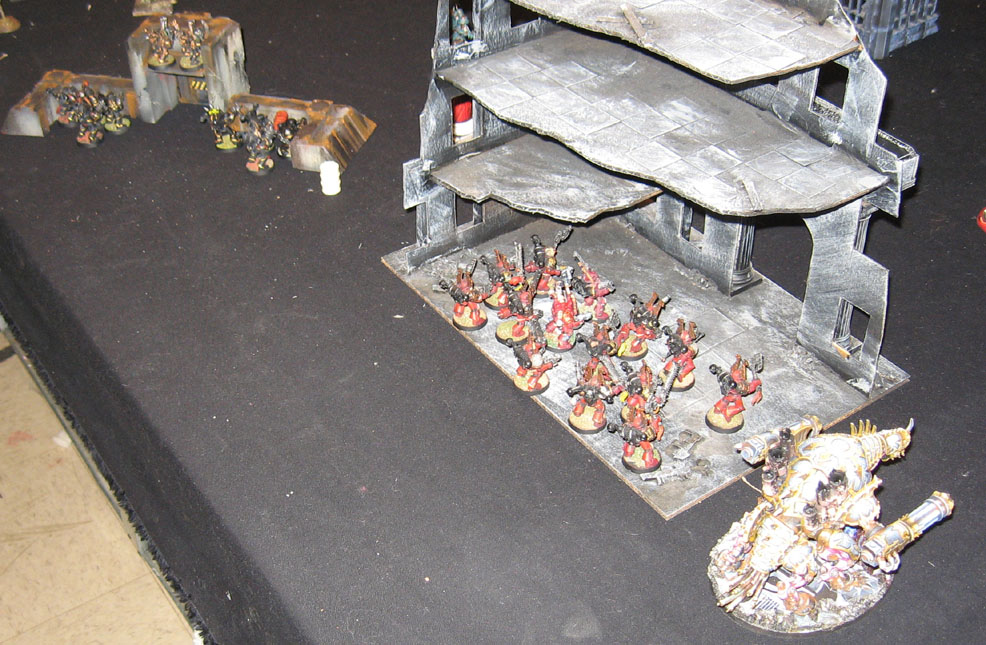 As the game is about to begin, you can see the board layout.  This was the mission with the point value objective markers and fast attack counting as scoring. 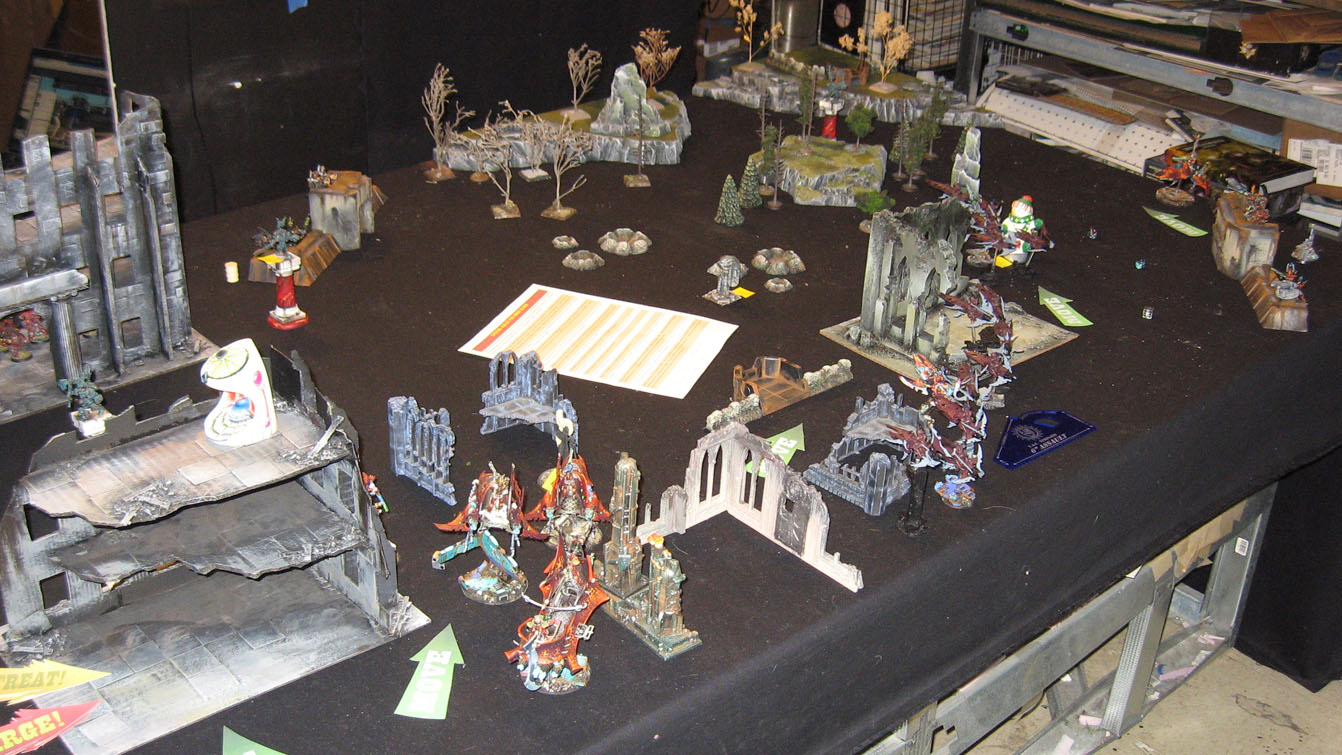 I wanted to experiment with turbo boosting this game.  I did so with all the bikes and the Venom.  It was a student body right, moving towards a few objectives. 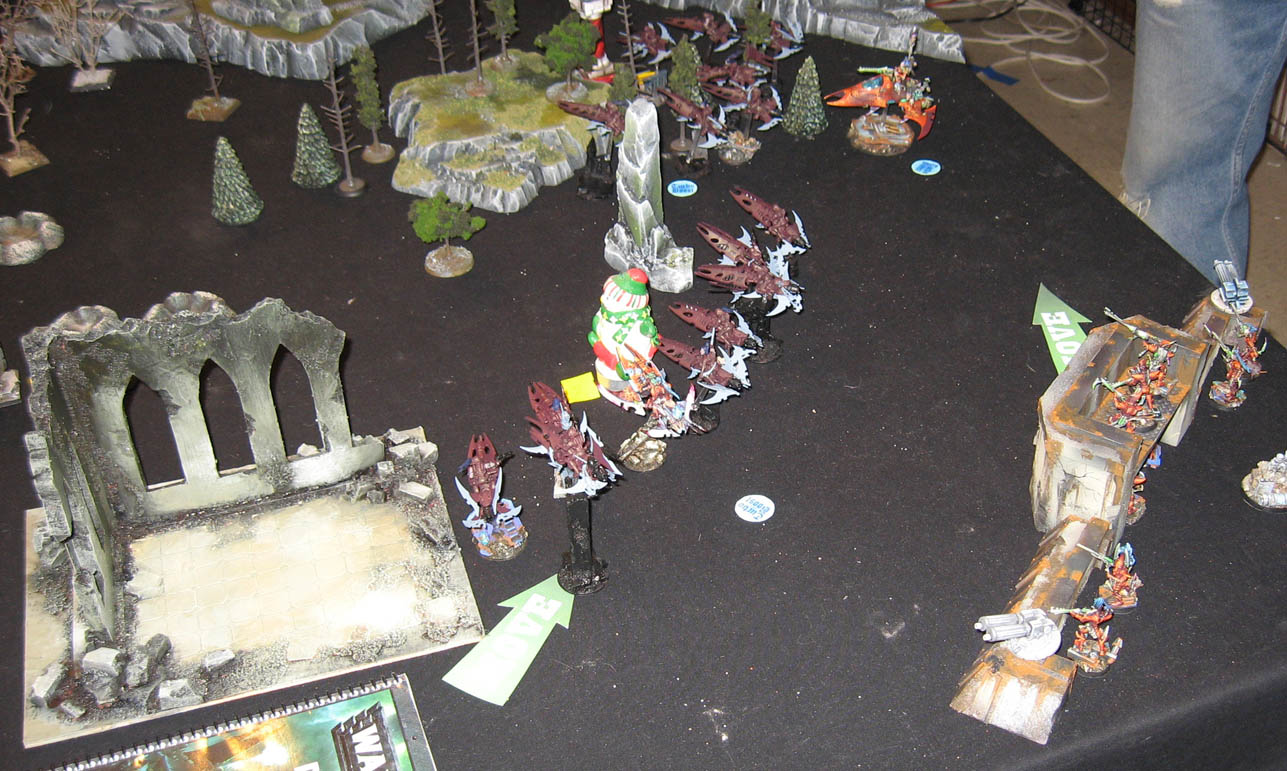 The other vehicles emerged from behind the building.  I had hoped that the NF and such would help me survive the CSM shooting on that first turn.

I knew that the CSM's had a bunch of stuff not on the board yet.  The Drake, the Khorne Raptors, and 2 more units of Khorne space marines.  I had hoped to isolate those as they came on the table, and wipe them out will all the fast stuff on my right side of the board.  Since the Jetbikes were scoring, I thought I could get those objectives plus the extra VP for linebreaker.

Stay tuned to find out what happened!!! 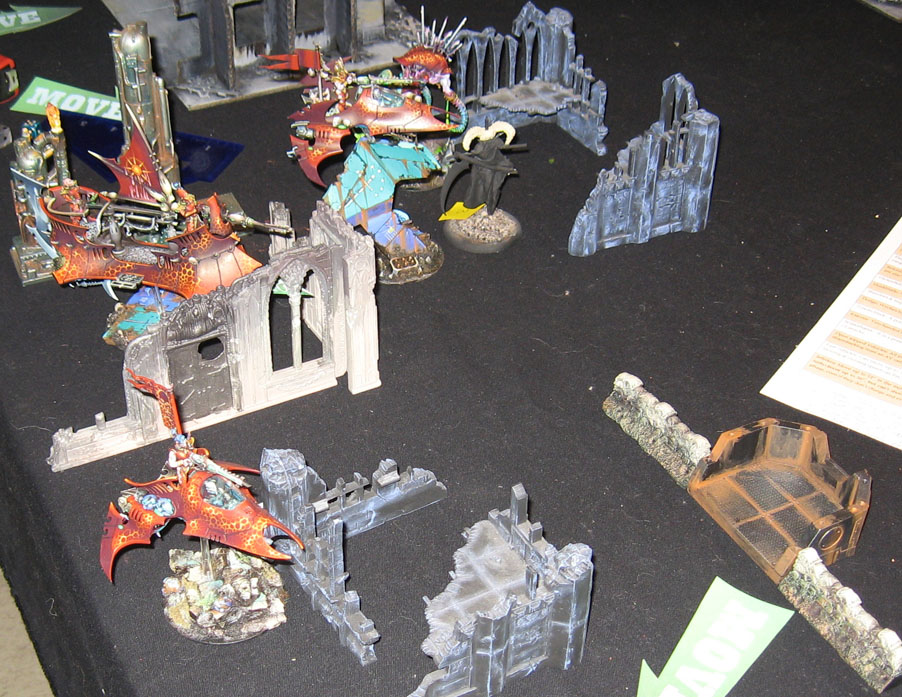 Posted by wappellious at 9:07 PM No comments: 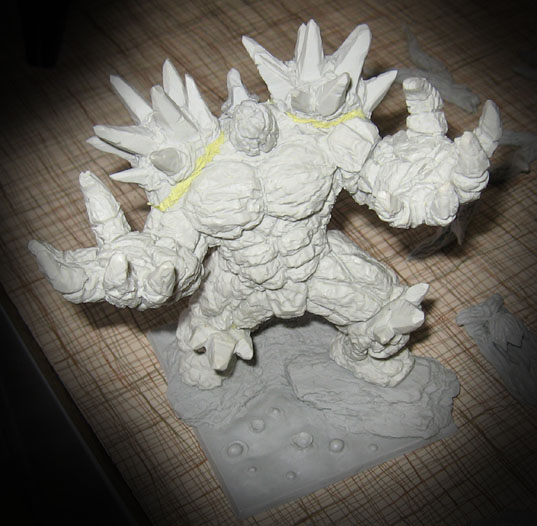 Here is something that just arrived!  These are some huge... and I do mean HUGE... figures from Rothand Studios.  You have the gigantic Stone Golem shown above, and a truly monstrous treeman! 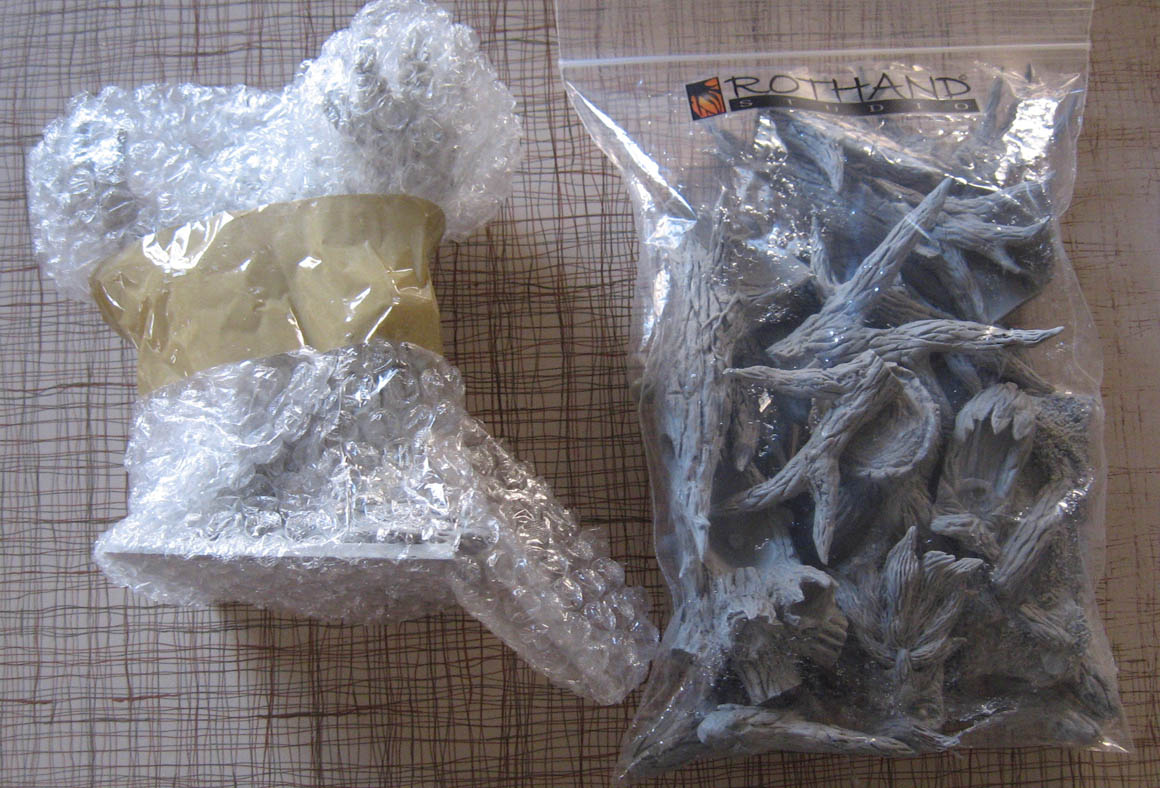 Here's another picture of the Golem.  He will be painted as if he is made from cooling lava.  Gonna be a blast!  I love the dynamic pose, and the sculpting will allow for all kinds of wonderful painting effects. 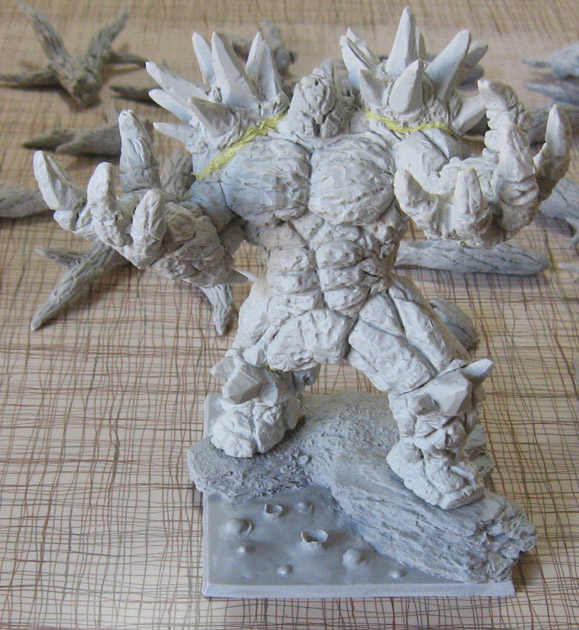 And now for that treeman.  Check him out!  The pieces fit together nicely (assembly instructions on the website... see the link below).  There are also two different faces which you can use! 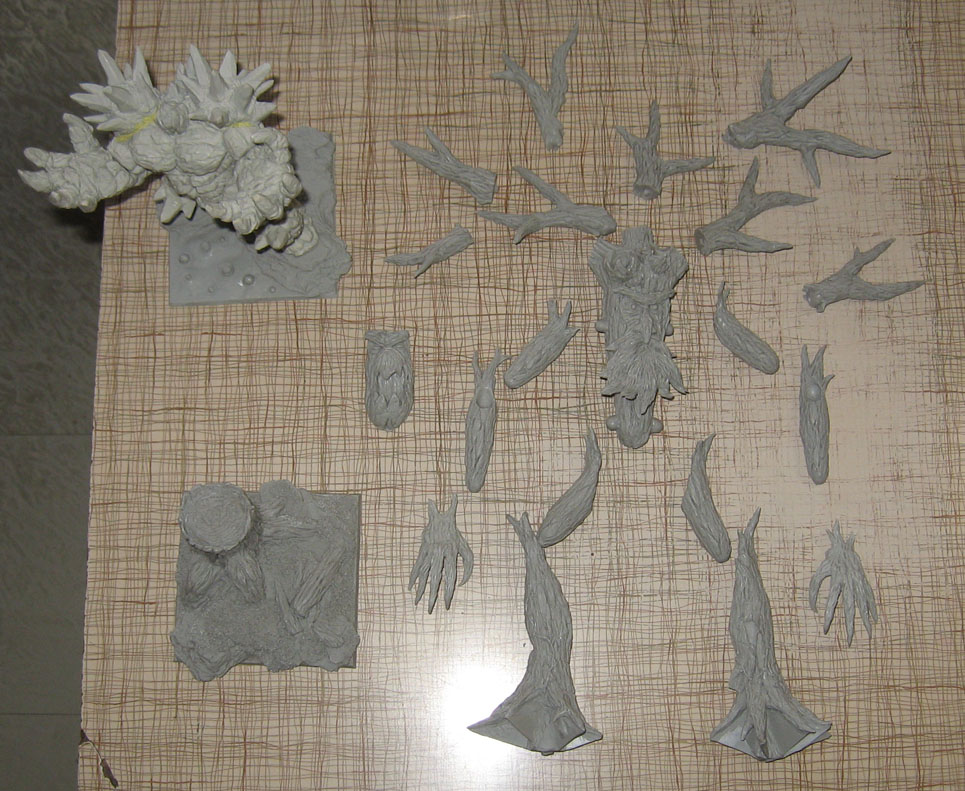 Both figures come with really nice bases, as you can see in the images.  To give you an idea of size, the Golem is about 7 inches tall.  The bases are about 4" x 4". 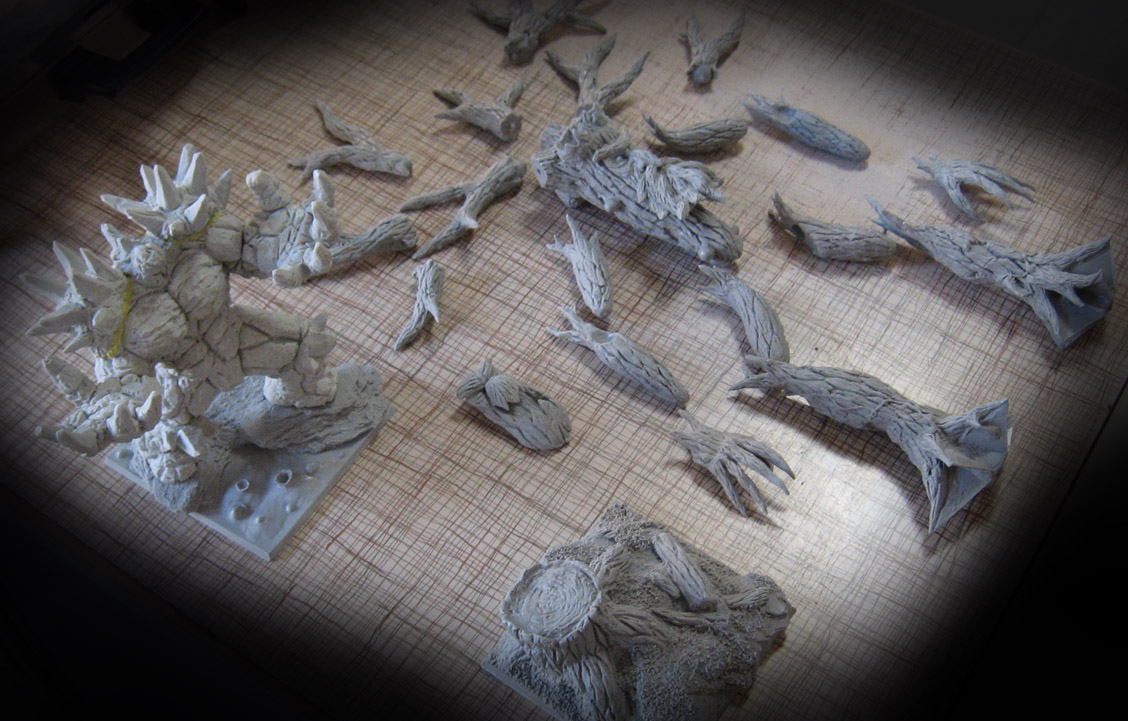 I will be making blog posts to chronicle the preparation and painting of these guys! 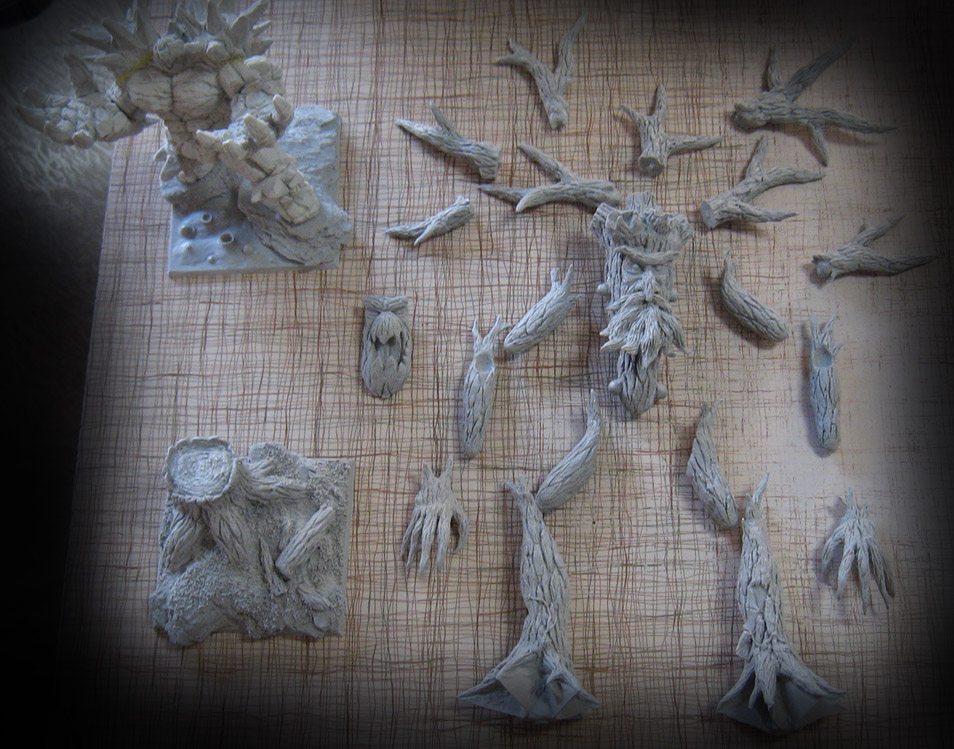 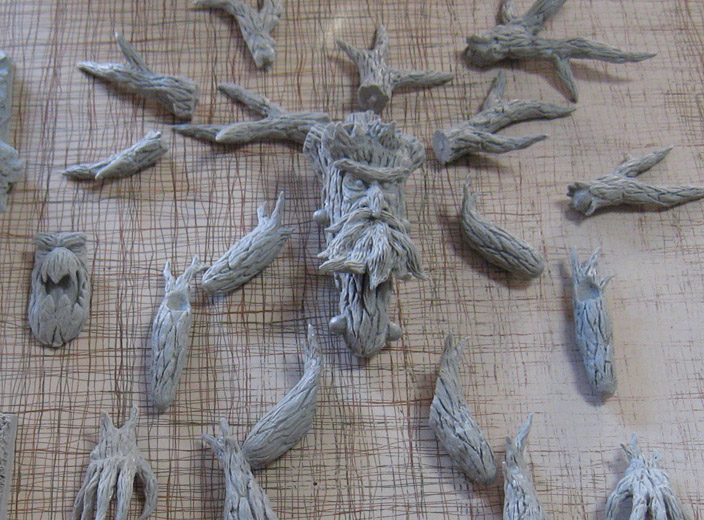 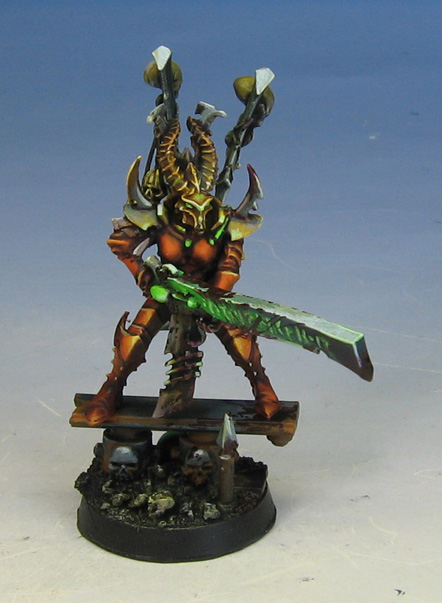 Here's the next set of converted Incubi figures.  Just as I did with all of them, I used Kabal Warriors, bits and plasticard to create them.

It is amazing to think how quickly the moment approaches when the blog reaches three quarters of a million views.  At the rate things go on a daily basis, that will be reached around the time of another milestone... Adepticon!

I will try to generate the same sort of posts that I did last year, although that will depend on how much internet access I have, and if I have enough time to process the images, etc.  The schedule is very different from last year, so we shall see. 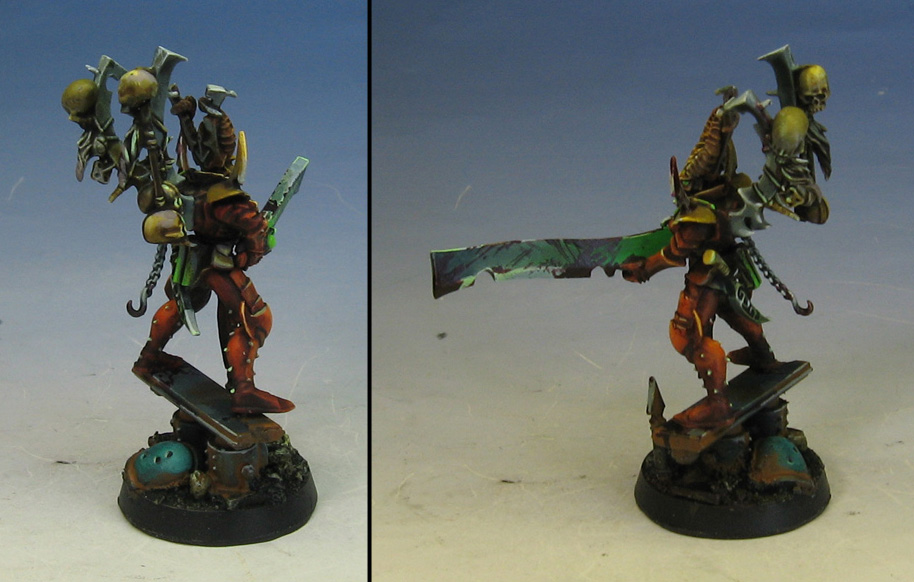 If there are as many triple flyer lists as I suspect there might be, I may not have all that many images to process :-)

These next few images are of the unit Klaivex...

So, another hearty thank you to all who have helped make this crazy blog what it is! 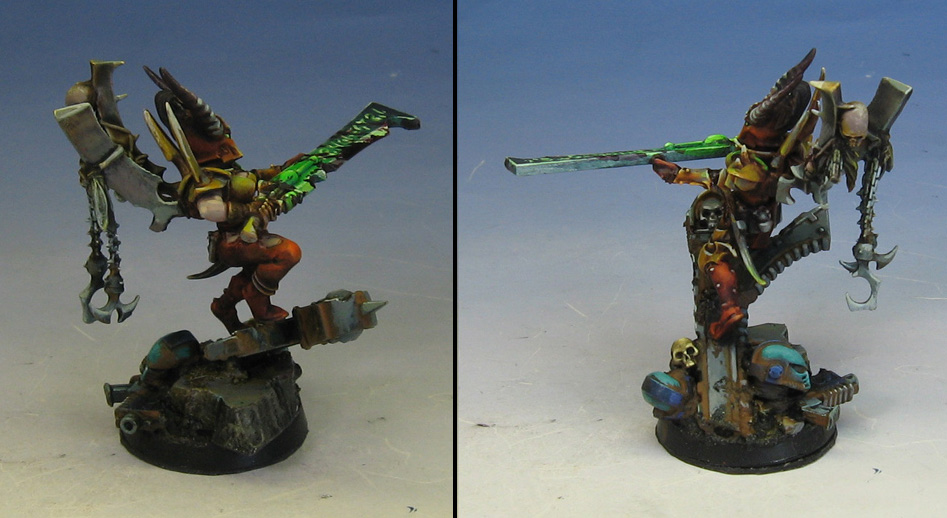