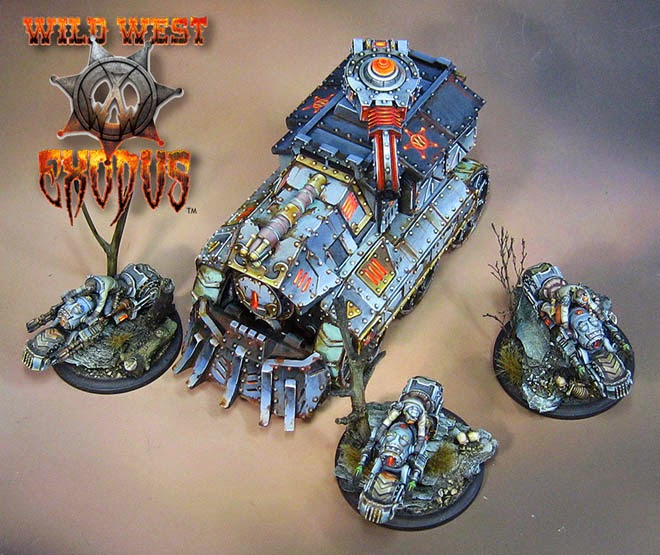 Now that you have seen some close ups of the Lizardman army, it's time to get close up on the newest endeavor... the Lawmen of Wappelville!

I just added Warren Earp to the character list, but in this image we have Wyatt and Virgil Earp, along with Doc Holliday, Marshall Berenger, Pat Garrett, and the Hero of Wappelville, Carl Fredrickson. 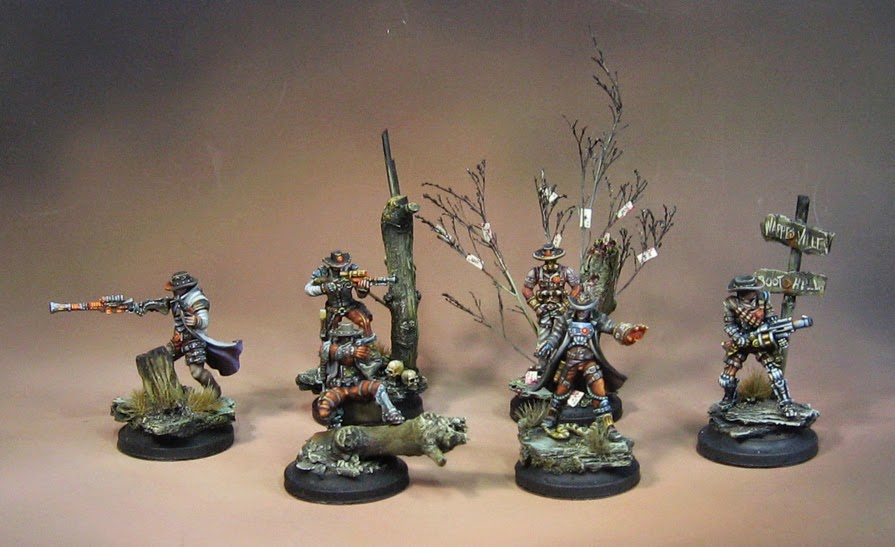 This set of Bosses, Underbosses and Sidekicks help make the Lawmen even more lethal to all those wishing to conduct nefarious business in Wappelville. 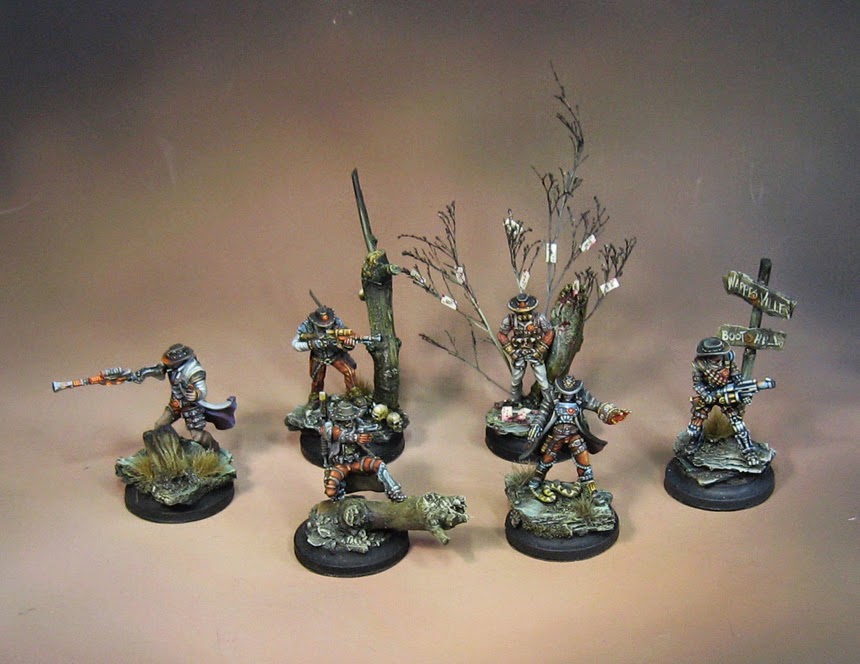 But no posse is complete without some Hired Hands!  This is the basic set of ten hired hands.  Hopefully, I will be able to add some Rangers to this set!

The close combat hired hands have proved their worth on the mean streets of Wappelville more than once.

This part of the Lawmen posse has continued to grow... in fact, one more Interceptor light support is on the way! 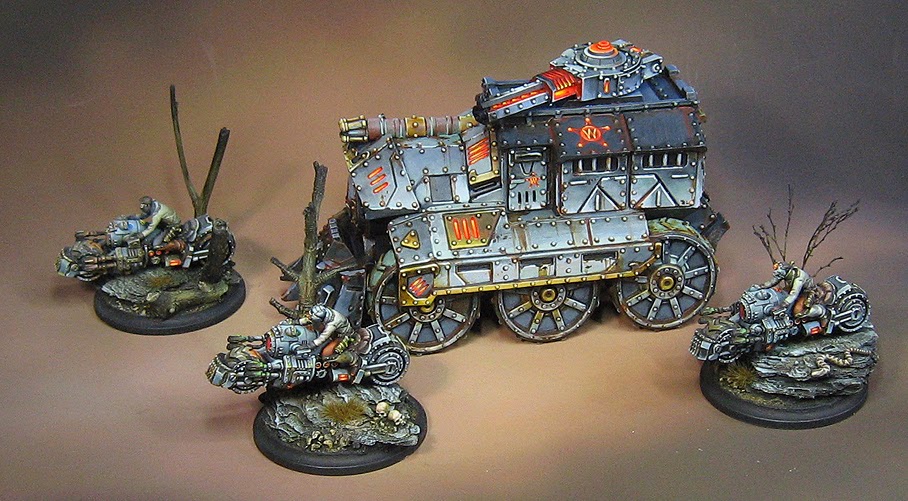 This not only provides a lot of speed to a posse that tends to mosey along, but it really boosts the amount of template weapon and long range firepower that can reduce an entire town to rubble in no time at all! 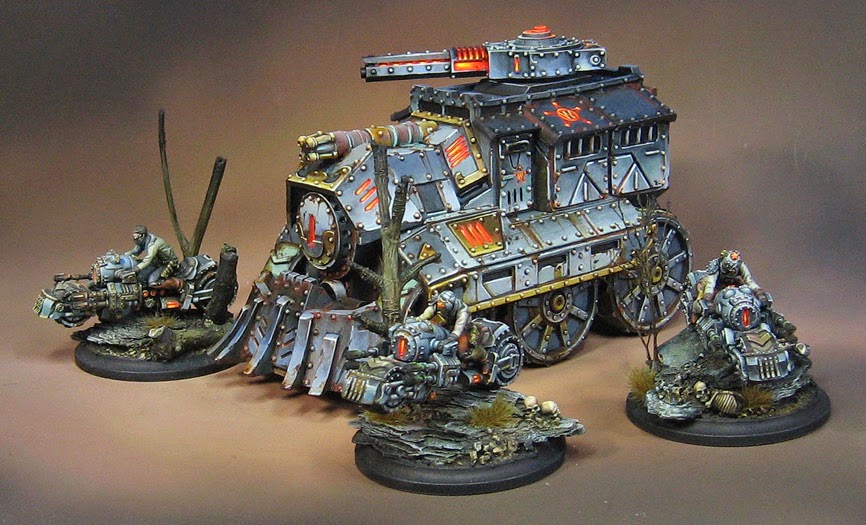 I really look forward to my own version of the "Four Horsemen" when that last Interceptor is complete.  I think a pair of "fire teams" would be extremely deadly! 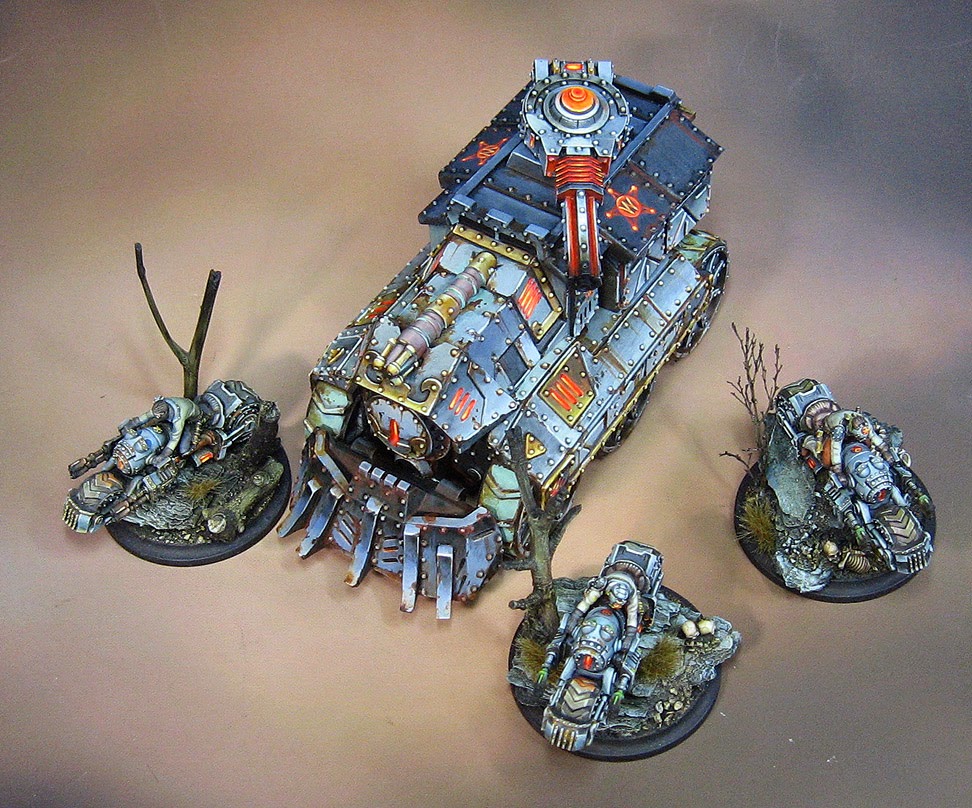 I was denied the chance to do some hanging with the Judgment in the first tussle with the Enlightened, but I think the next time around, and certain inventor needs to find his way into the mobile jail.

He keeps playing that Vaudeville music far to loud... it's the Devil's calling card, to be sure! 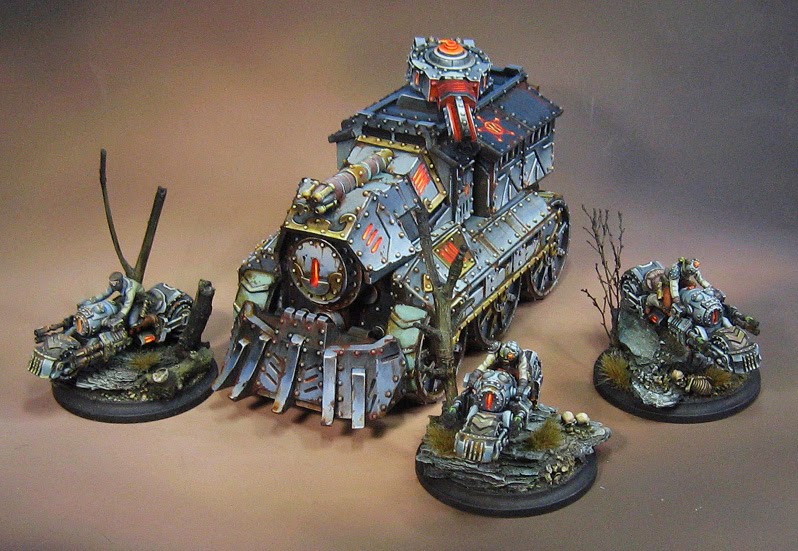 When you see this coming towards you... it probably the last thing you're going to see!

It looks like I will be getting some more additions to this posse, courtesy of a few stretch goals that have now been reached in the Wild West Exodus 2 kickstarter!  Check them out, since mass amounts of hired hands have been added to higher level pledges for free!! 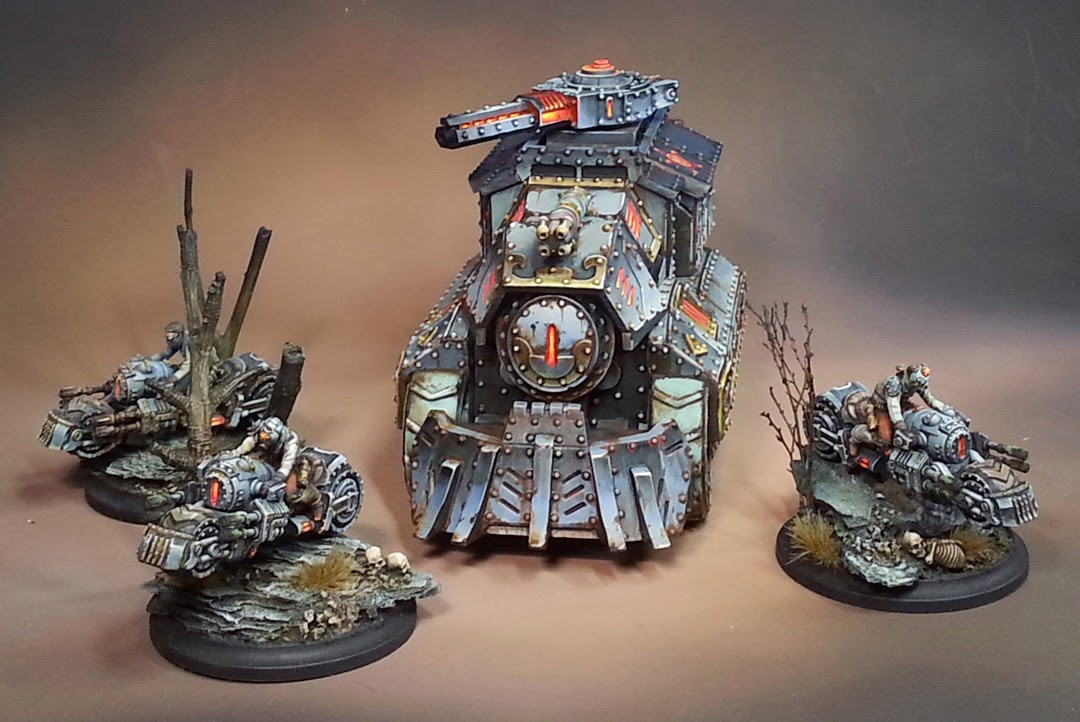 Posted by wappellious at 1:01 PM No comments: 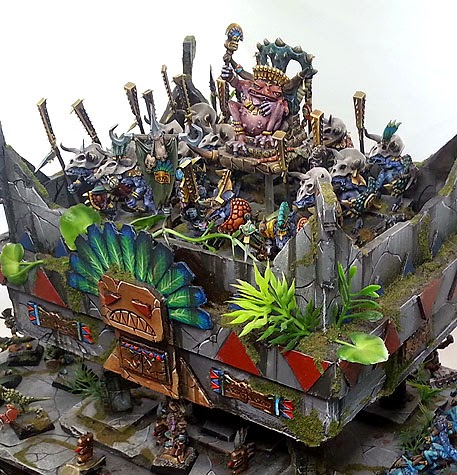 We return to Lustria once more to get some close views of the Temple of Blood.

As I mentioned many times, this was more than just a display board.  It was meant to be a piece of playable terrain. 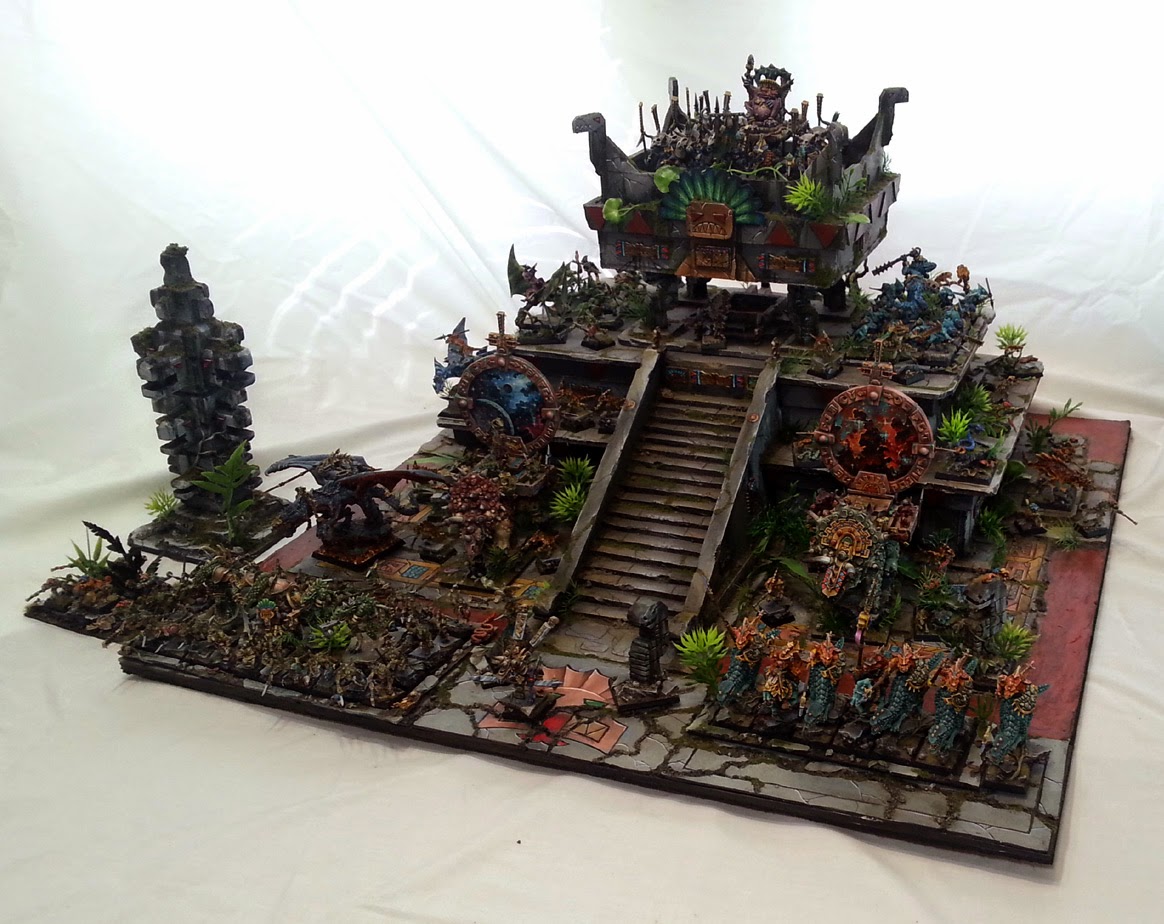 That battle was actually the first in a four part campaign, which concluded with an even larger battle for the Temple.  This series was based on the original story of the army: 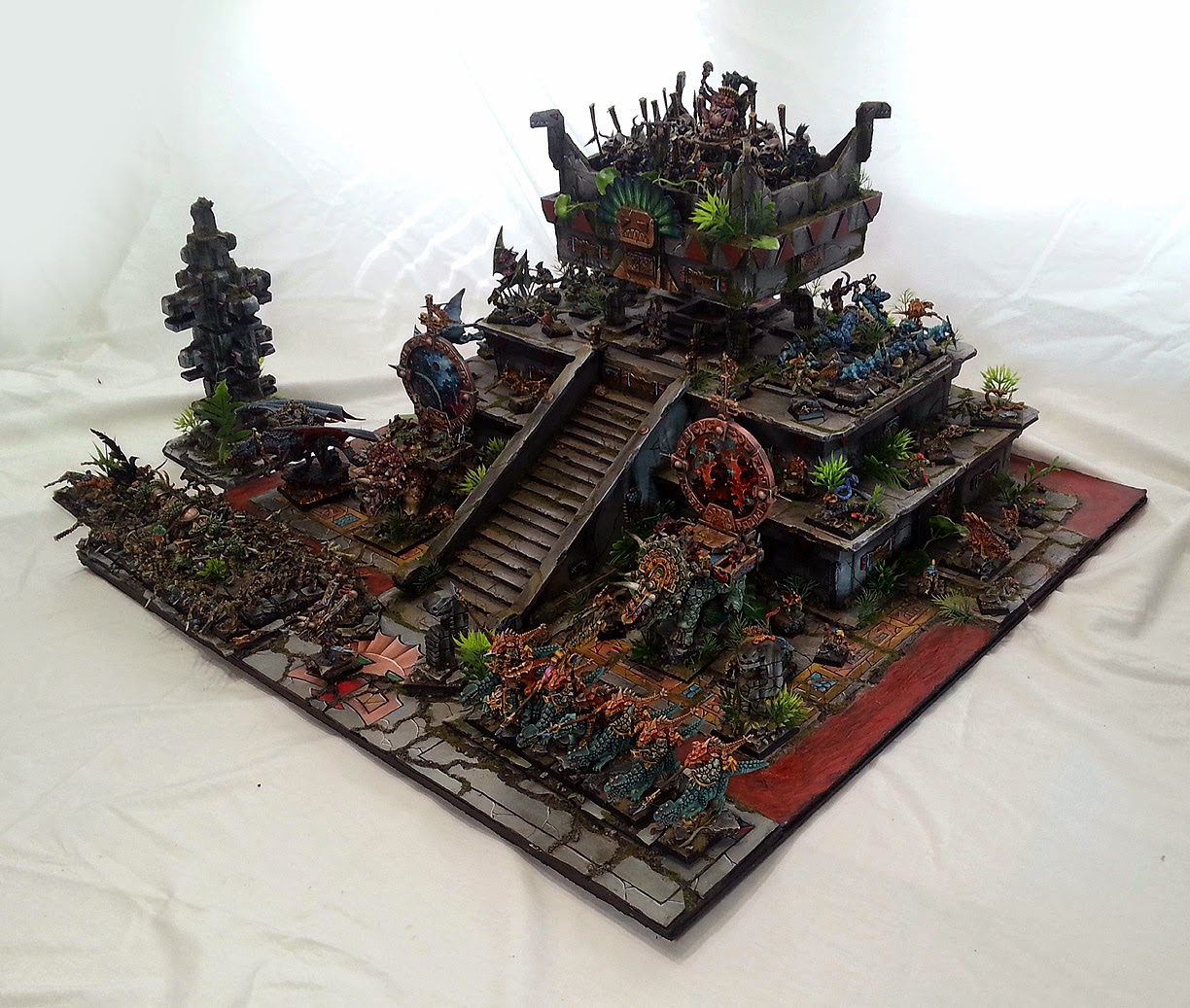 I have a number of articles on the scratch sculpted Engines of the Gods: 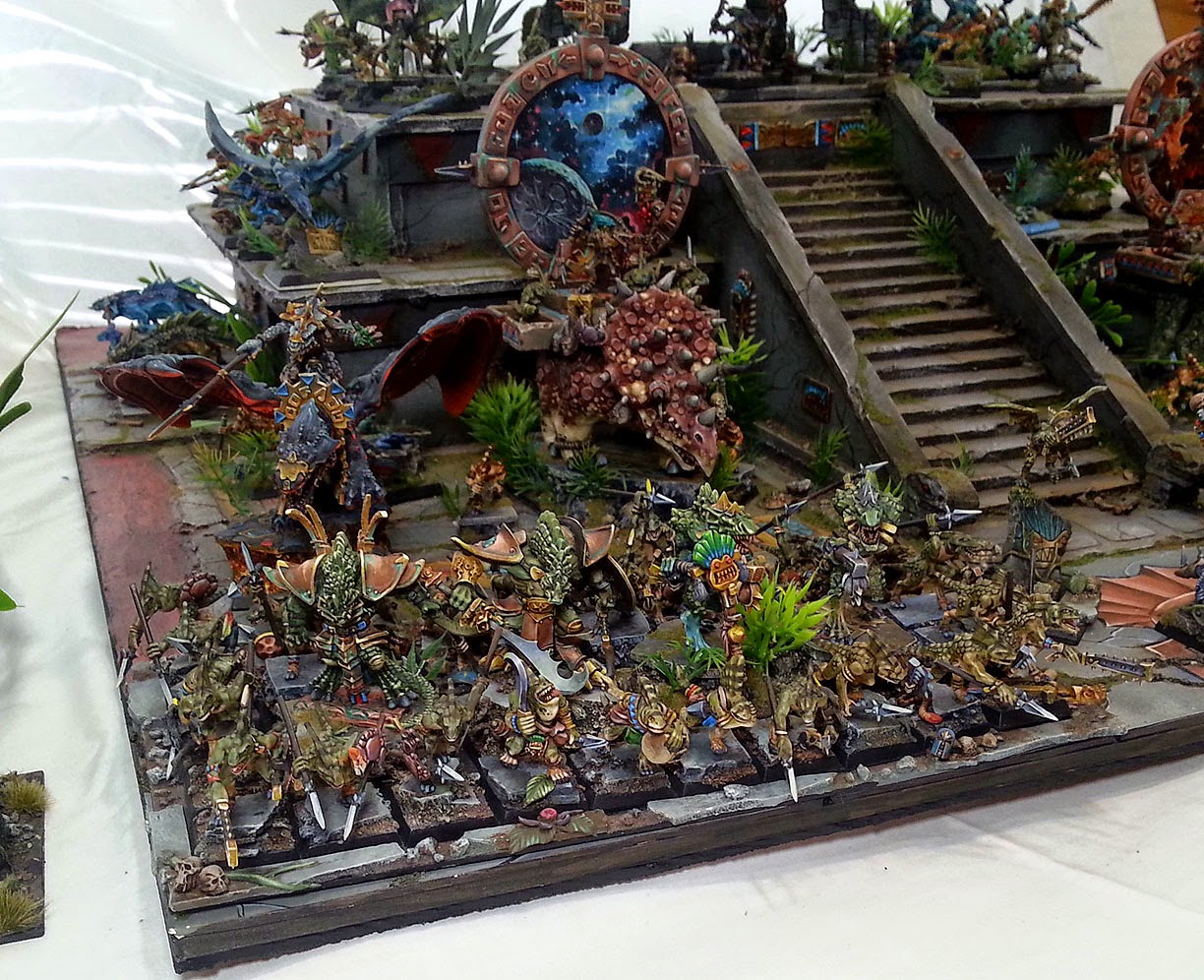 My favorite units were my SKrox units... mixed skink and Kroxigors.  I called them my foot cavalry: 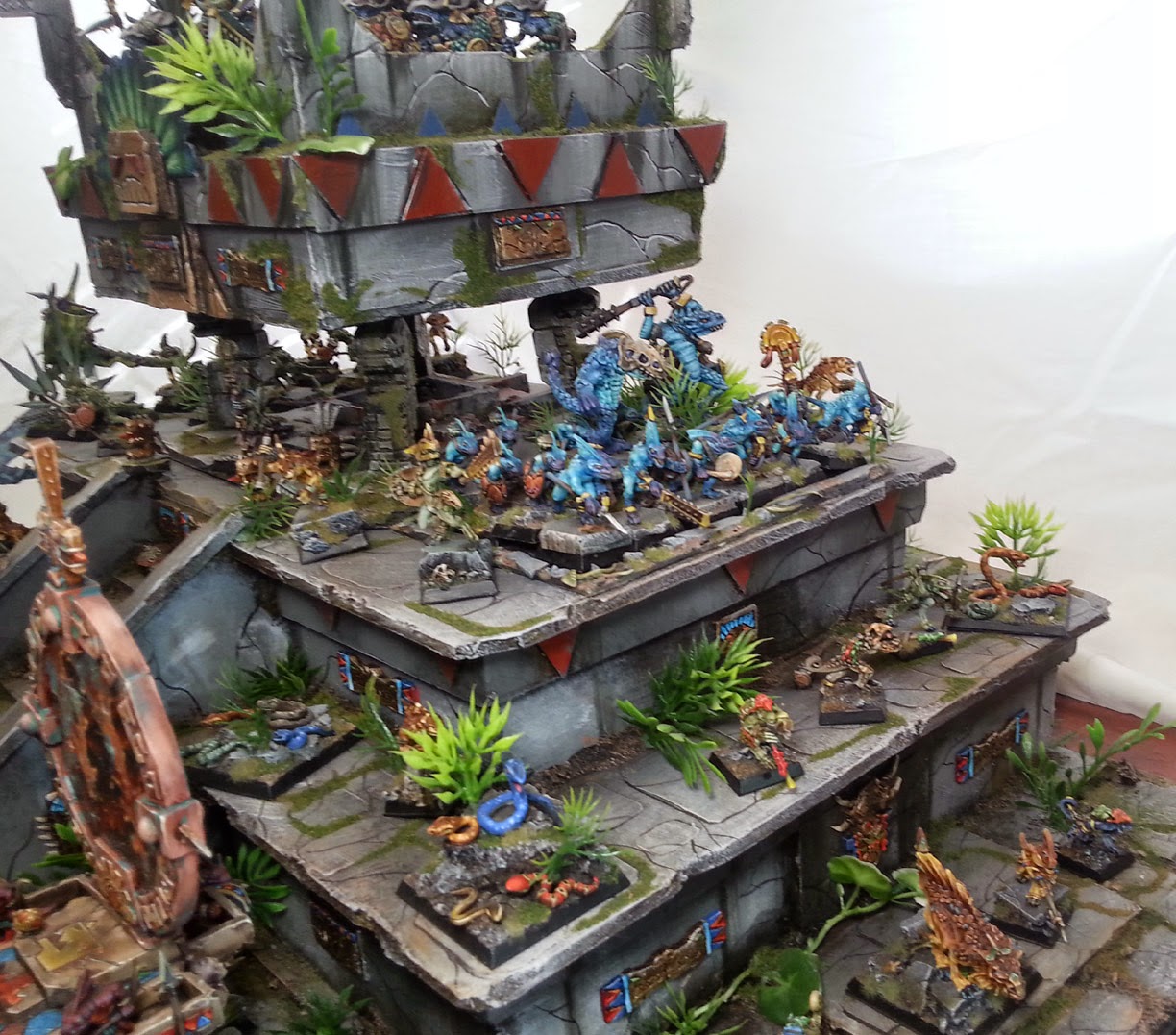 I also had a blast sculpting terradons from scratch: 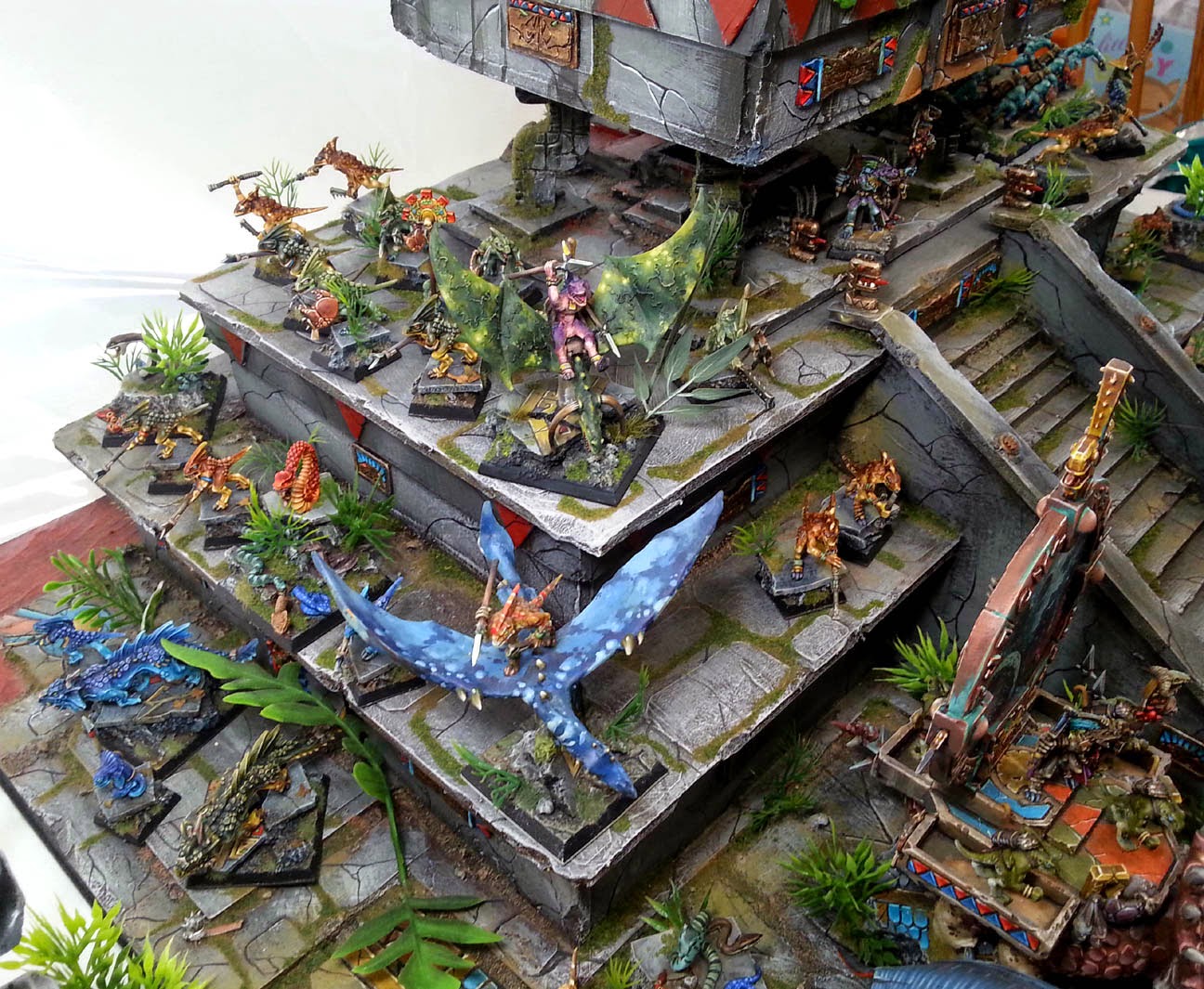 Mage Priest Babo and his guardians: 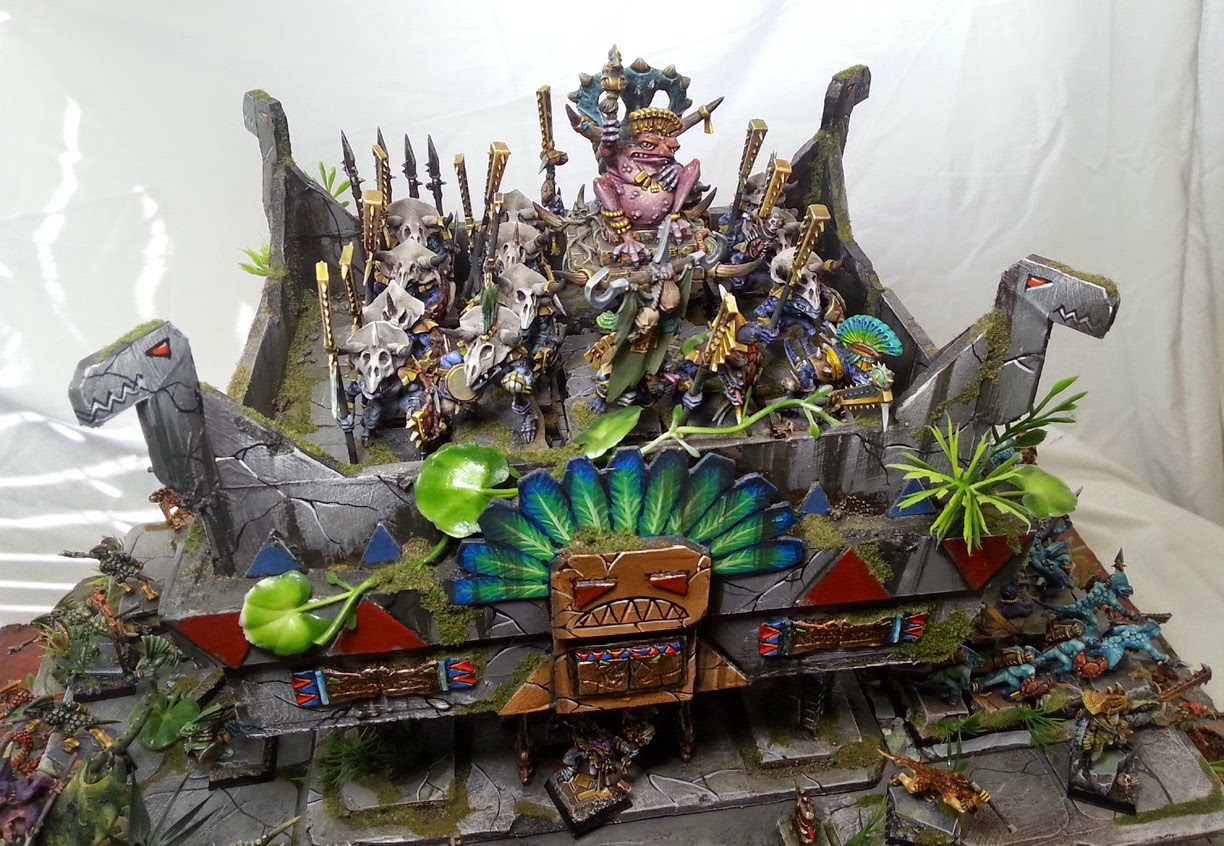 And my Cold One Riders, who managed to fail 5 consecutive stupidity rolls.  Yes, leadership nine, three D6, pick the two lowest.  They ended up in some trees by the end of the game.

However, they did manage to win a Silver Demon, just one of numerous awards the army brought home! 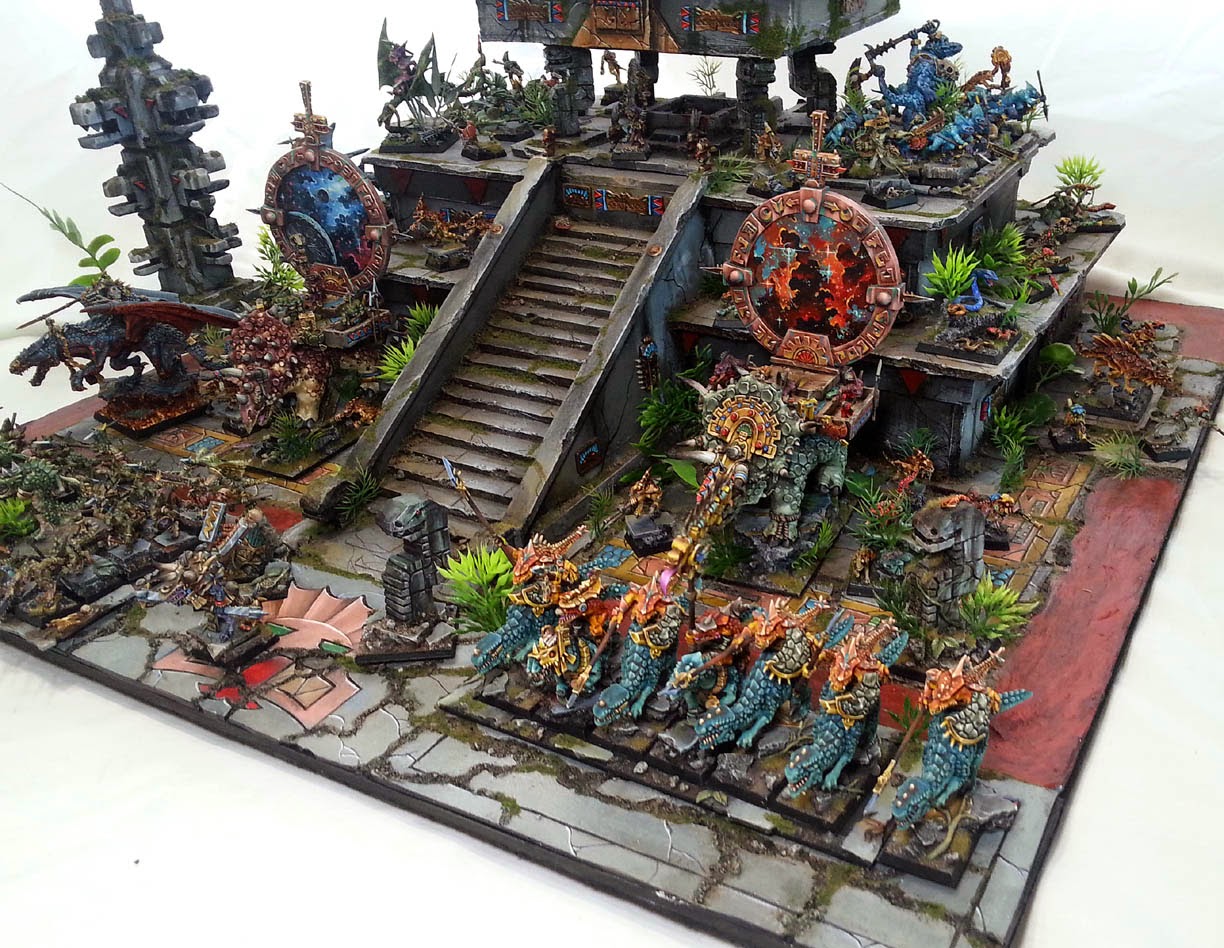 I can't recall how many were won, but I know that Babo, the Kroxigor, and a number of my units all won Demons, Rogue Demons, and so on. 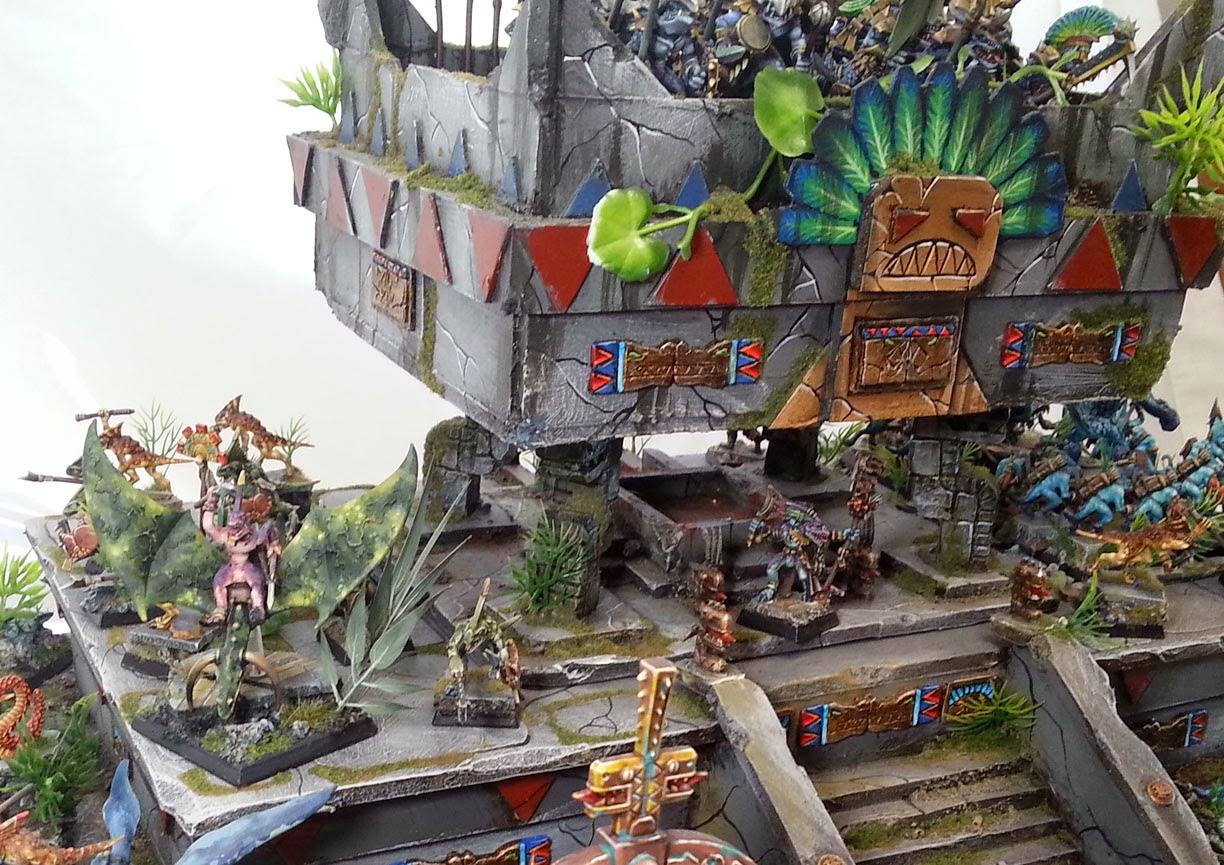 On the topic of painting for contests... seeing my Lizardman army was yet another reminder of why I don't do that.  What I enjoy is creating scenes like this.

The terrain, the movement trays, the bases, the conversions, even writing the army story.

This is so much more fun, and to me far more long lasting.  I enjoy looking at this (and even using it!) as much now as when it was first constructed years ago. 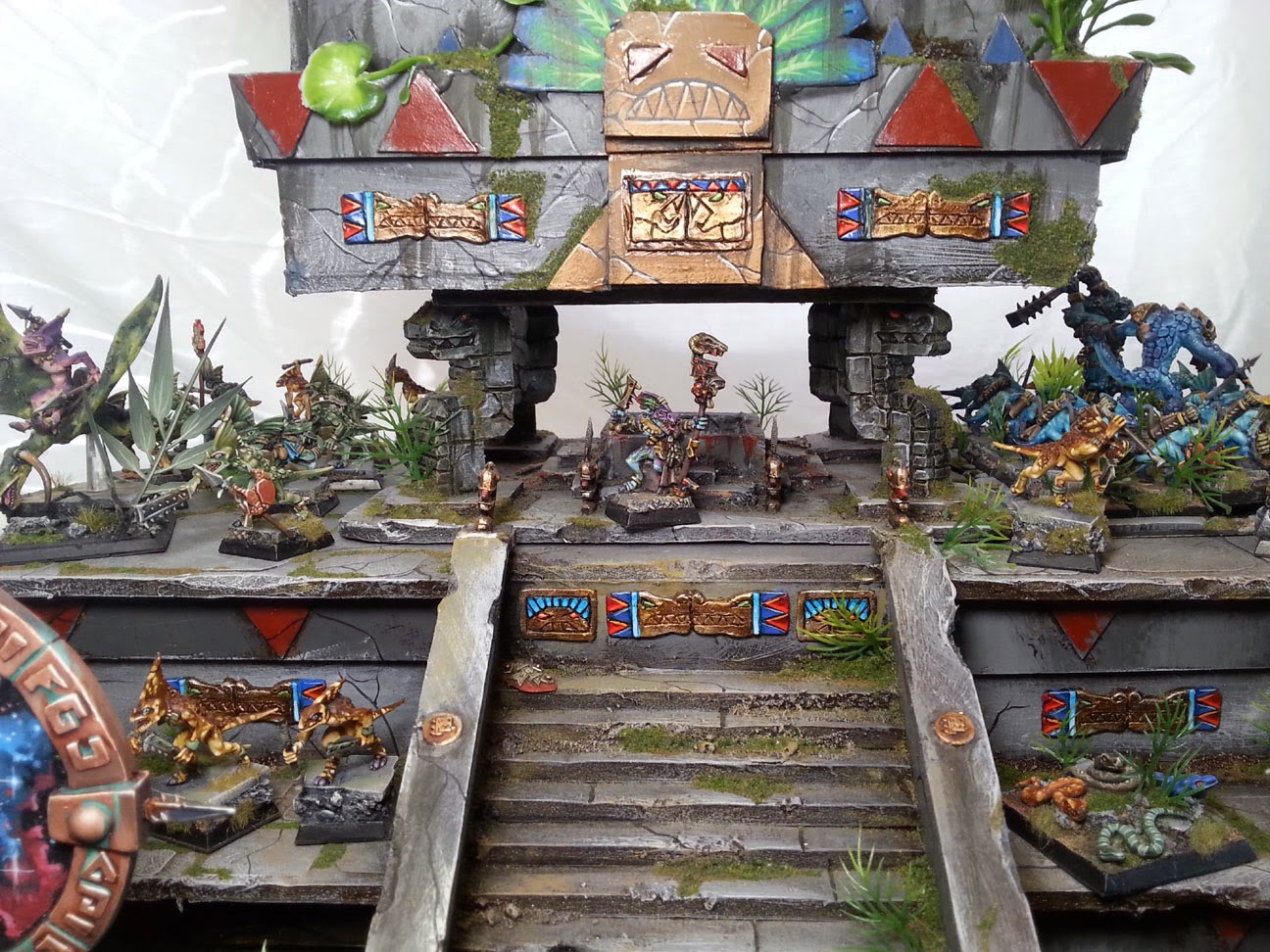 This is why I would rather paint an entire series of Wild West Exodus posses, and the terrain that goes with it.  We are having all kinds of fun playing the game, coming up with stories and scenarios for battles... and innovating along the way

All of my current techniques were forged in the cauldron of "How the heck am I going to make this vision for the army possible?".

The mother of invention is necessity, and there's nothing like the necessity of creating hundreds of miniatures, bases, trays and terrain boards for an event to spur the little gray cells!!! 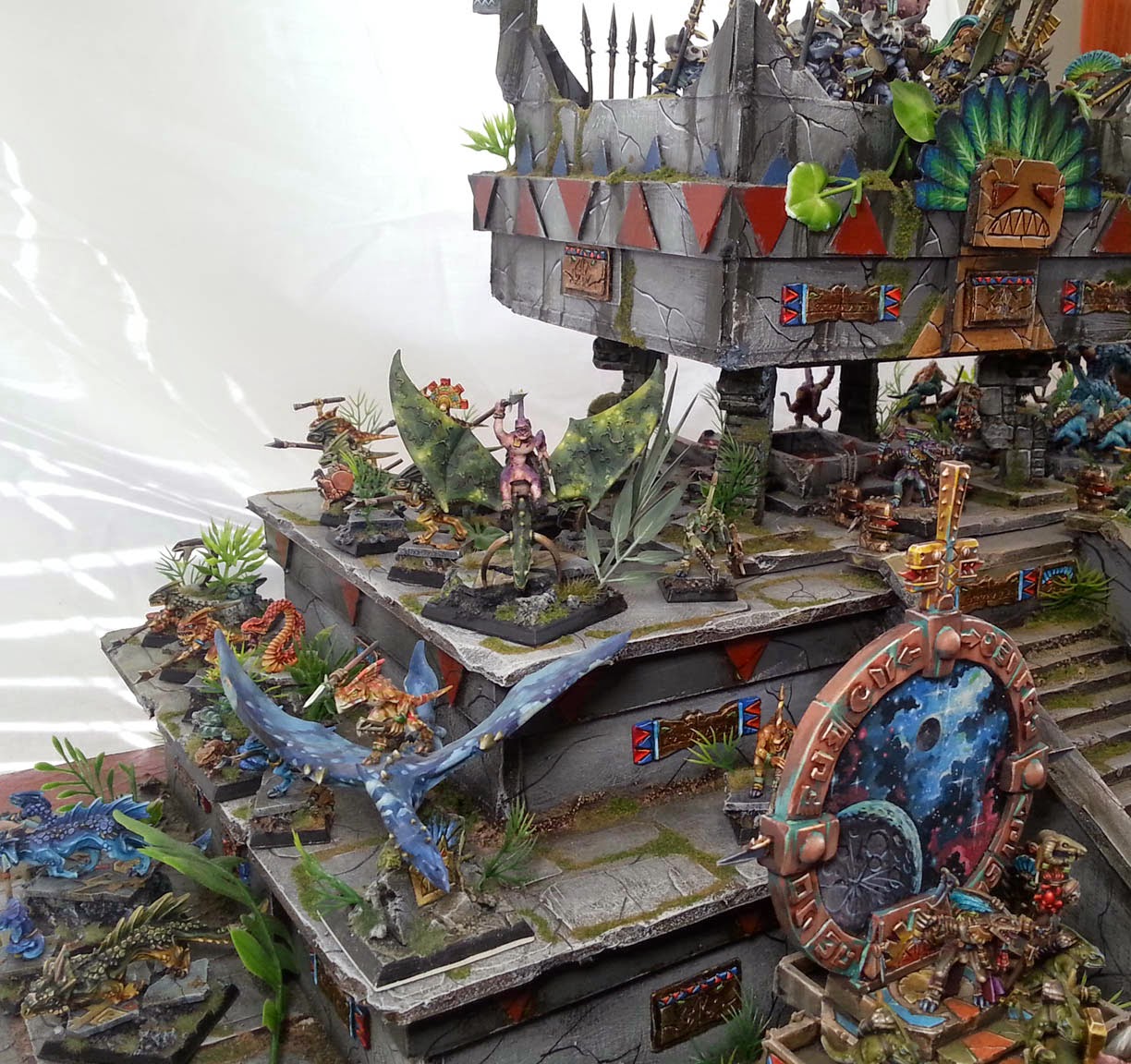