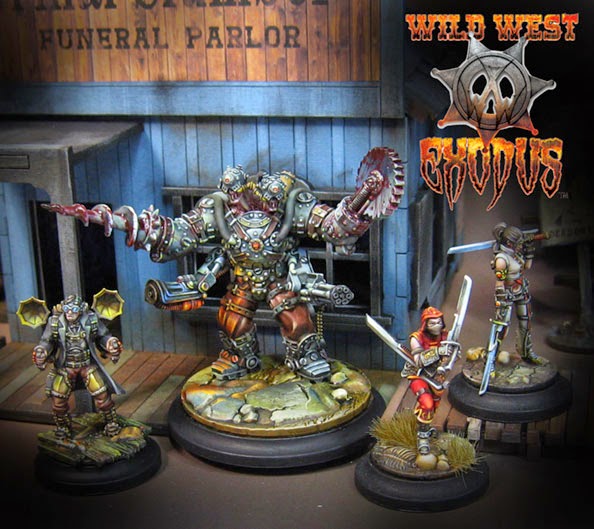 Naturally, Carpathian's evil minions are drawn to the supplies of RJ-1027, in addition to all the other "raw materials" that are to be found in the cemetery and the Undertaker's. 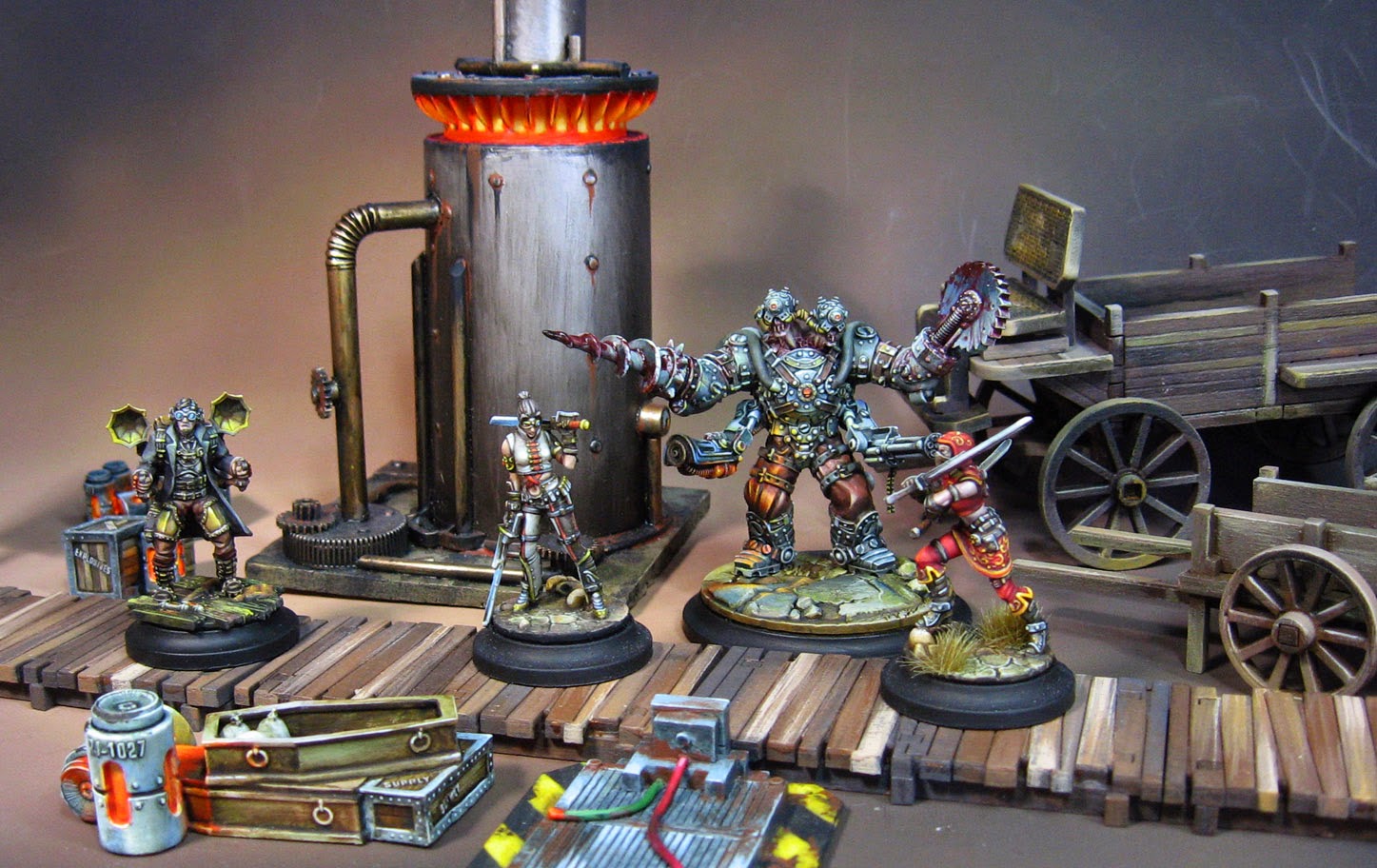 Some of the terrain in this image is from Burn in Designs, as most of you already know.  I also made some of it myself, such as the charging stations and the power generator. 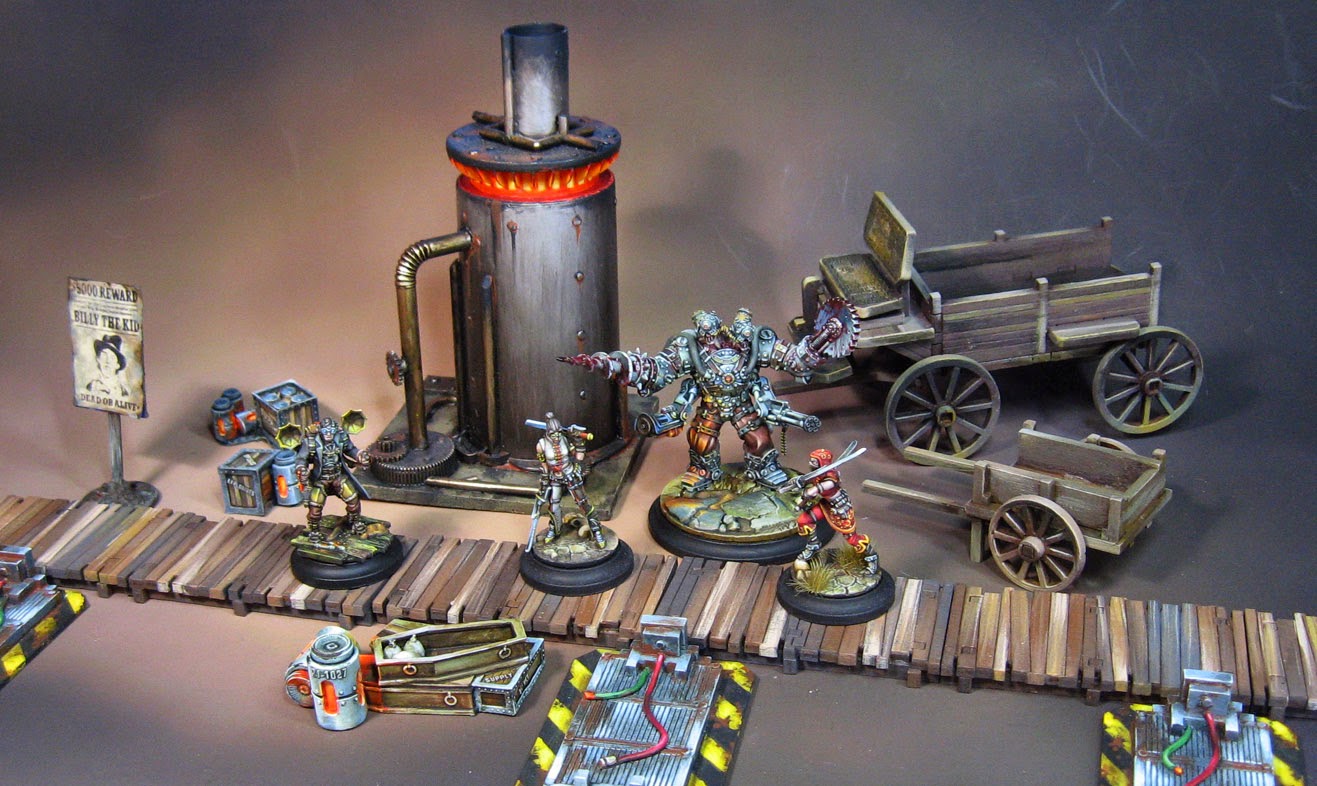 The view from above makes it appear that Creation 7 has some loading to do of those wagons! 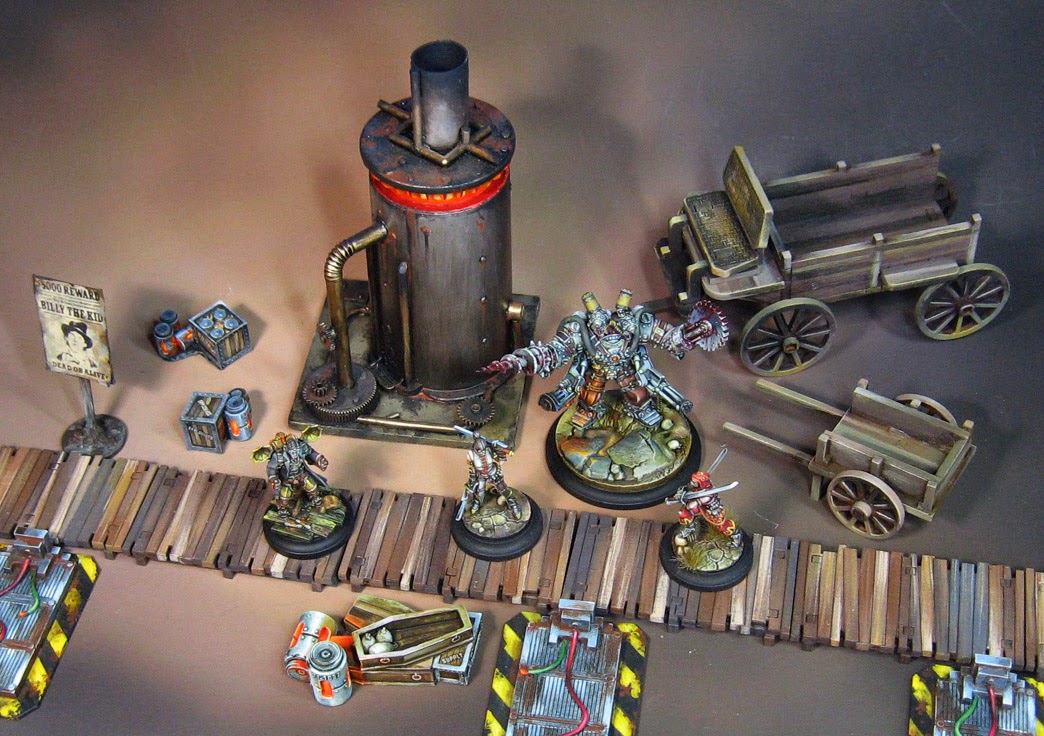 Speaking of the Undertaker's we are back to the Final Slumber funeral parlor... 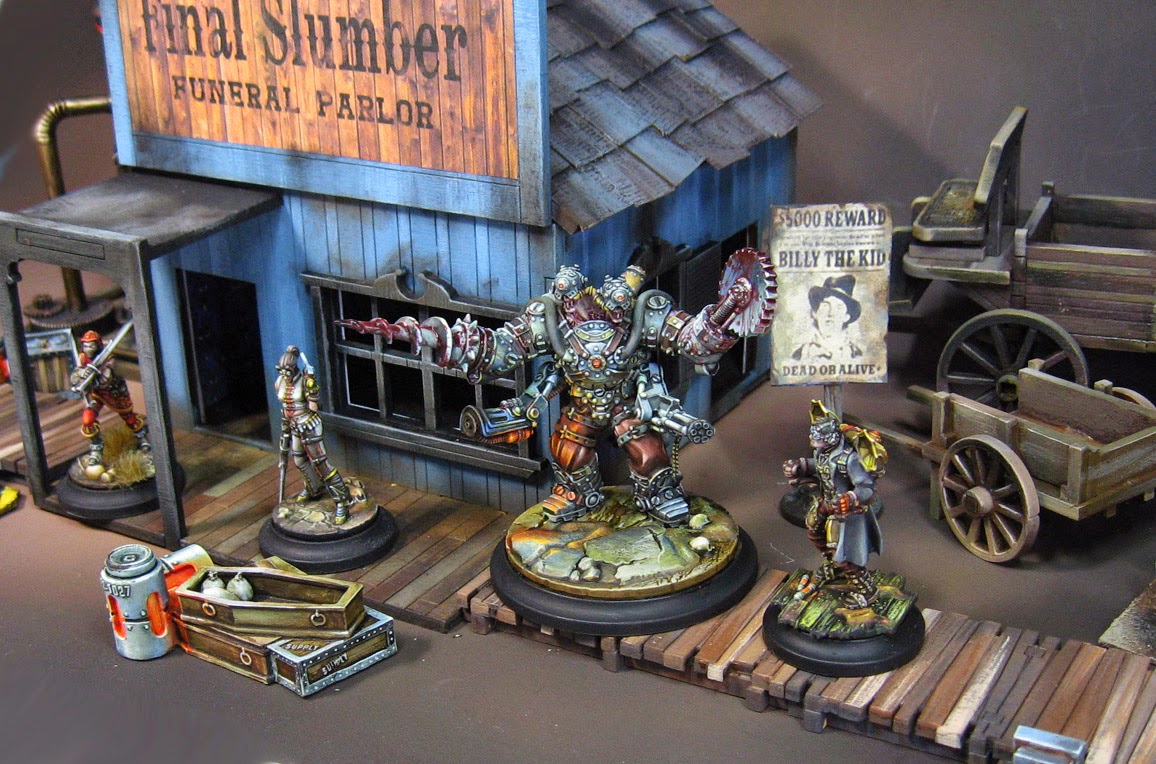 One of the Yi Sisters clearly had some business inside. 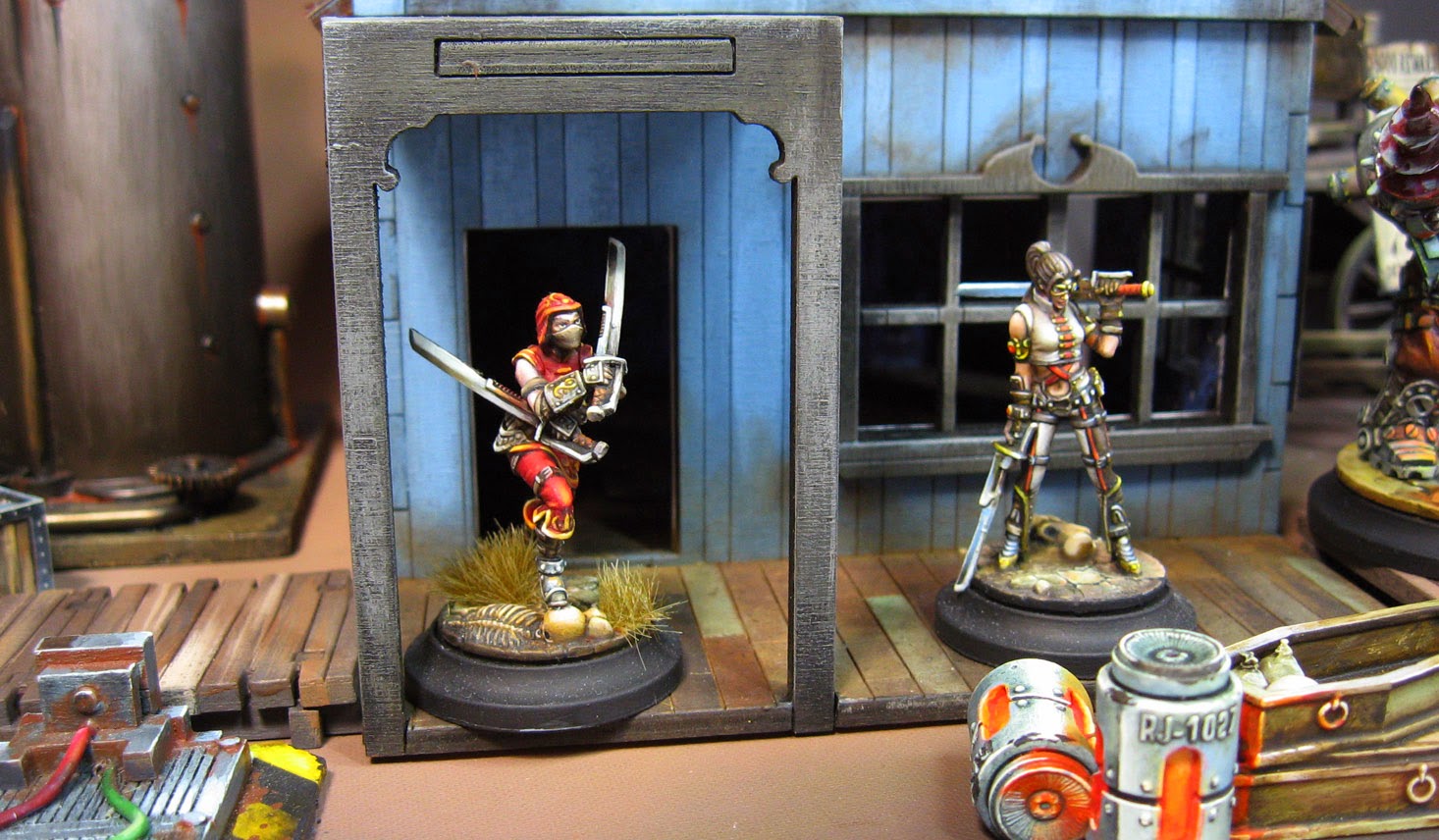 As neat as it is to see the pictures of the finished miniatures, it's even more fun to view them in this context.  I love seeing them in terrain!

These are the same kind of scenes that play out in our games of Wild West Exodus, as you have seen in the battle reports. 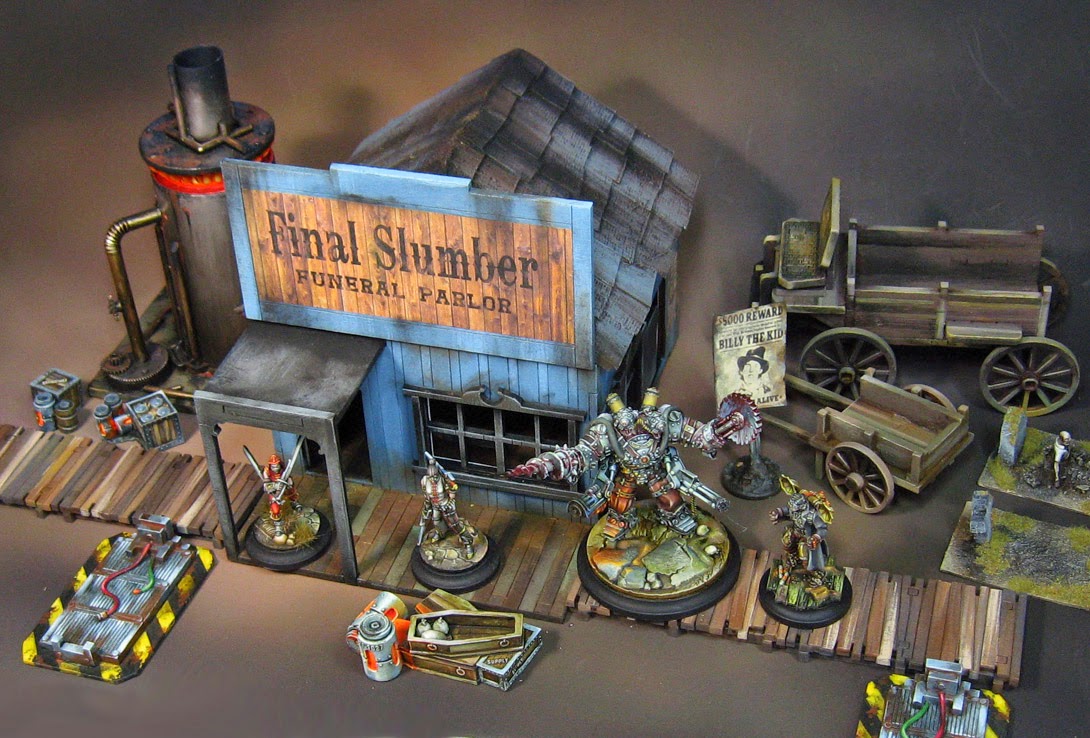 At a certain point I will have my own Enlightened posse.  This will center around Eiffel and other constructs, as well as the Monocav. 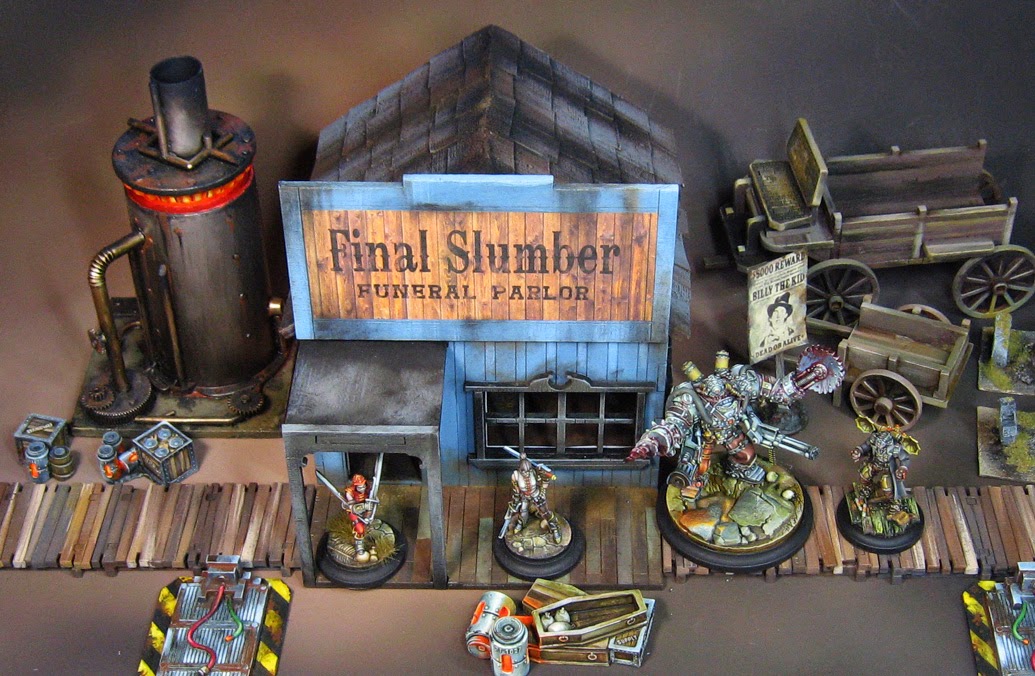 The next Burn in Designs building that is getting its final details is the train station, as well as the Battle Train.  Those two kits together should make quite a scene! 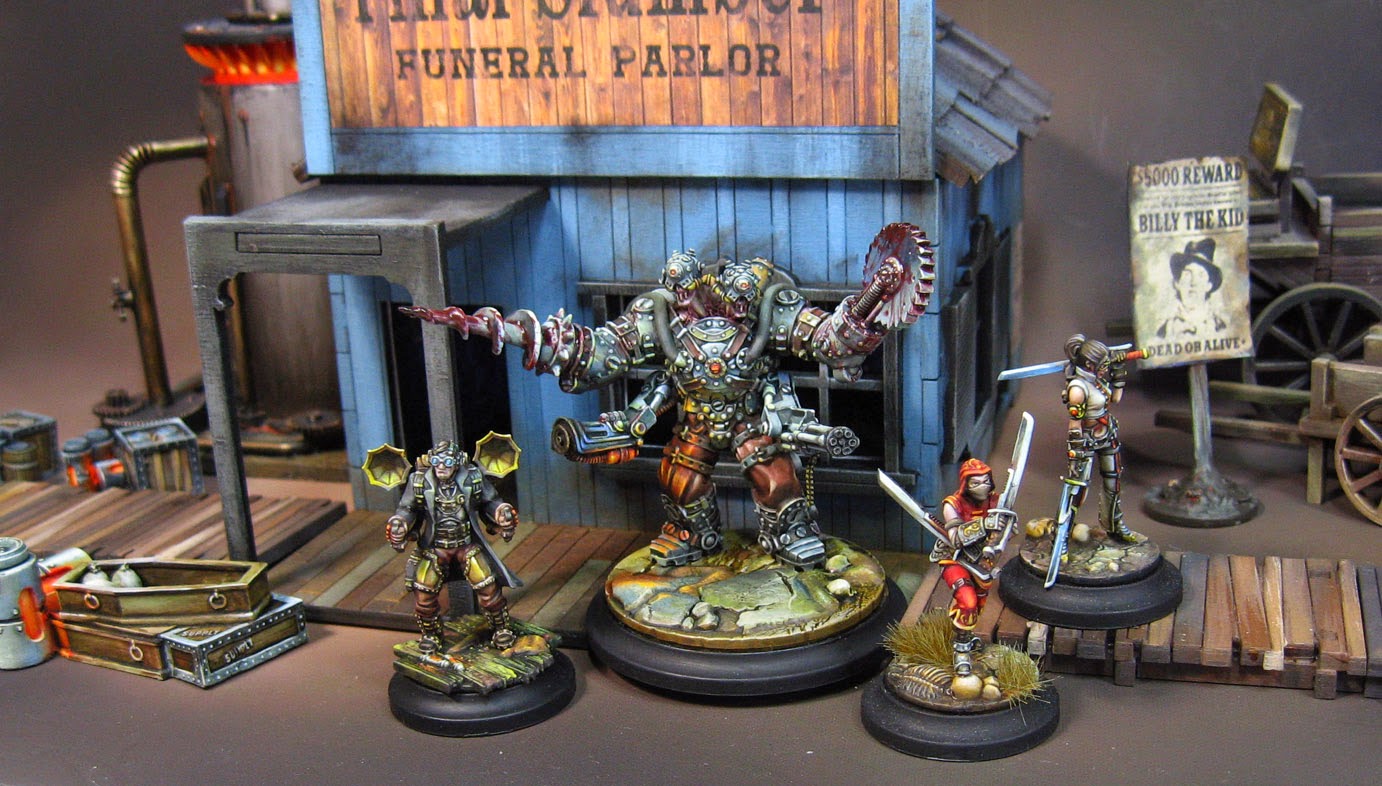 Posted by wappellious at 1:43 PM No comments: 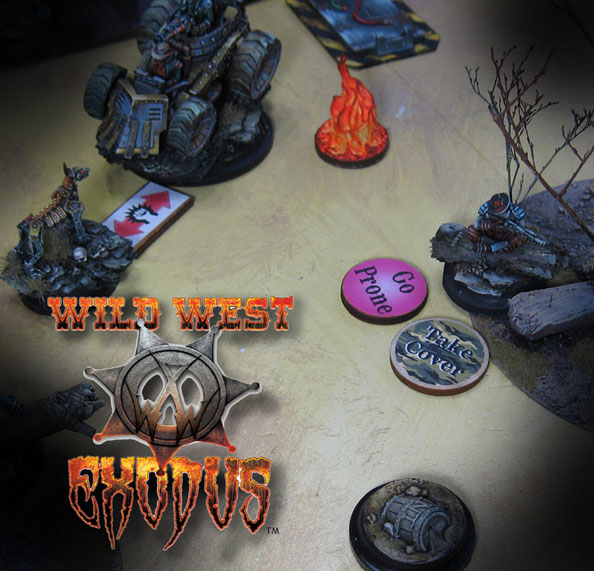 As you already know, we love Wild West Exodus because of all the actions which are available to even the lowliest Outlaw grunt.  These actions (and effects) are designated by various tokens, which WWX furnishes: 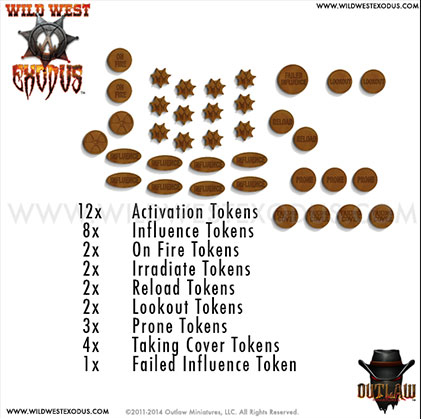 You have seen Rich and I use these quite often in our battle reports.  They work very well.  Since we use a lot of terrain, lots of counters are needed.  To handle this, we combined all of our token sets together.

This has worked just fine, until the day I tried to run a game for a new player.  After we set up and started playing, I realized to my horror that all of the tokens were with Rich!  Yikes!

I set about to rectify this lack of tokens as soon as possible.  These are items that I have made in the past for out WFB and 40k games, but I wanted to have something a little better.

I thought briefly about using a lot of unique shapes, and even charge/retreat markers... 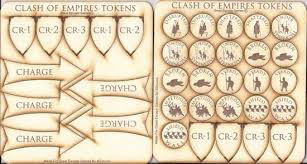 Instead, I settled on circles, because I had dozens of wooden circle cutouts from the Burn In Designs paint pot trays. 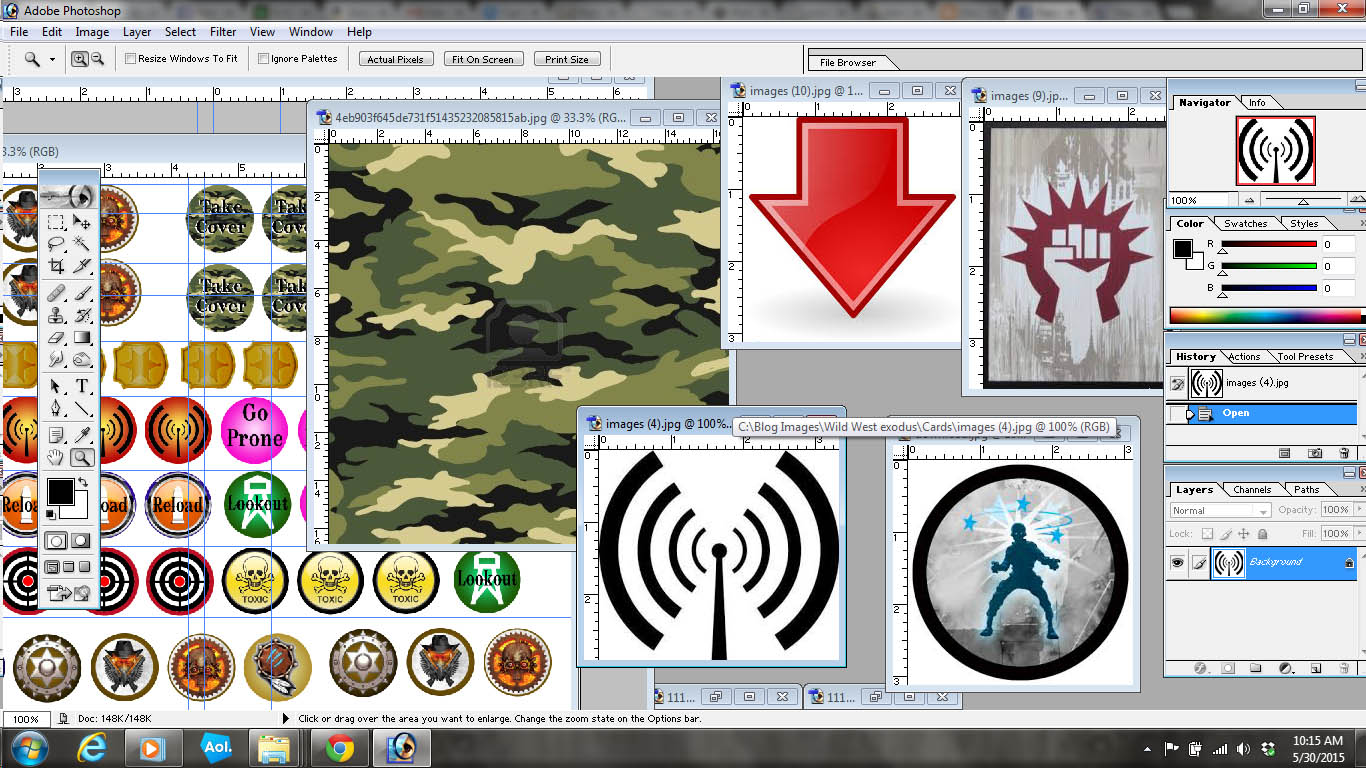 These were sized in photoshop, and text was added where needed (the Wappelville stuff is for the railway sign). 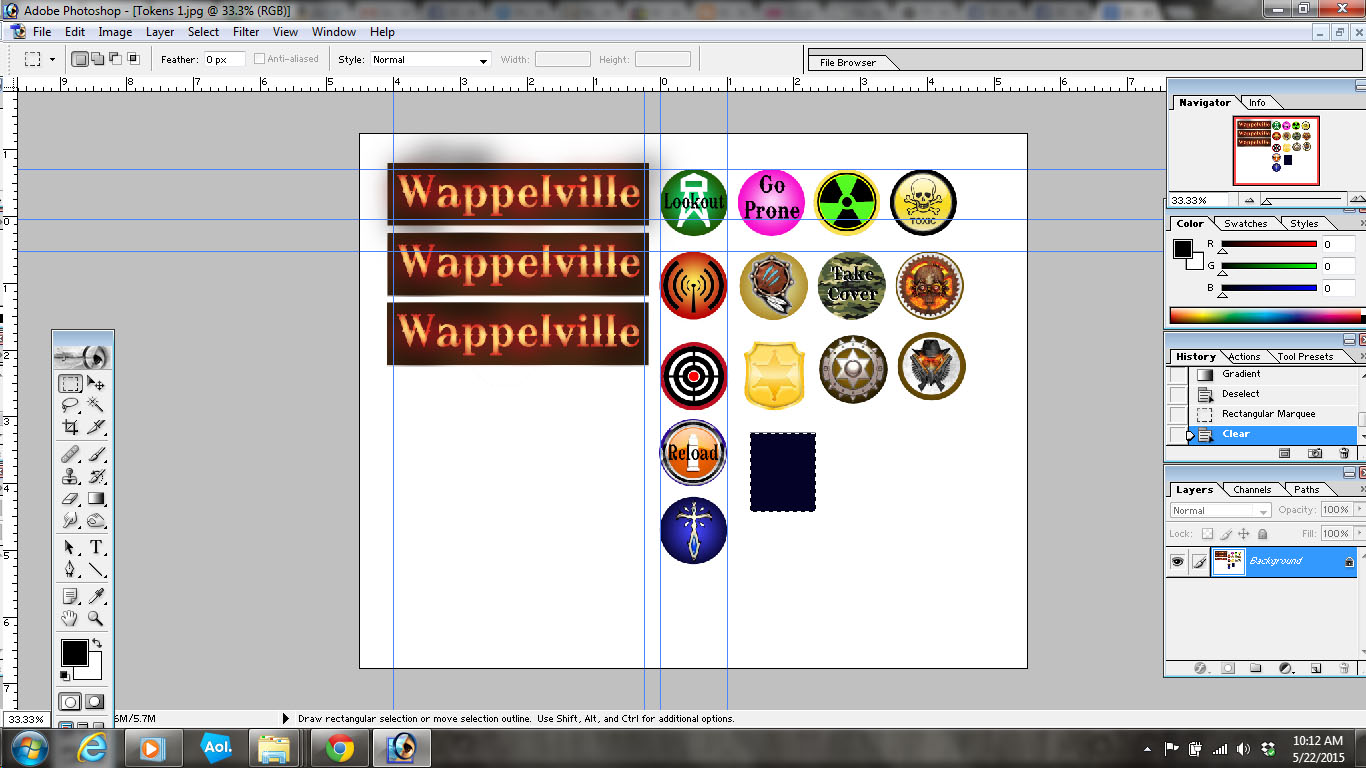 A finished token set!  Well, one of two.  I also thought that I would make custom influence counters, since we frequently got ours mixed up, etc.  The shields are for Lawmen's Forward Eschelon effect. 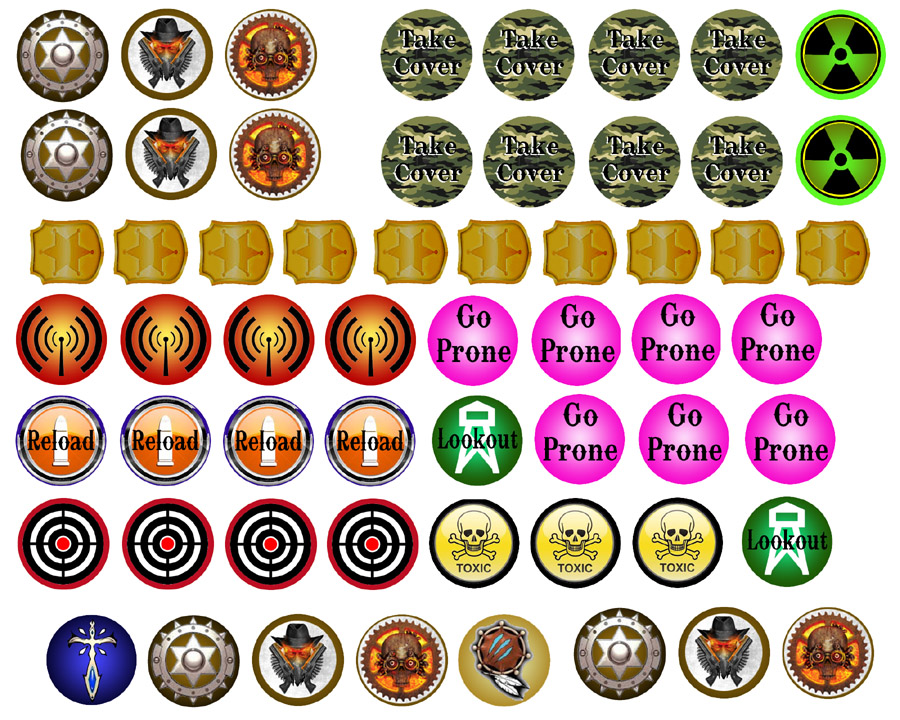 This has more Influence counters, as well as some close combat designations.  With each figure having a "halo", it's very rare thet two minis are actually in base to base contact during close combat.

Now we know exactly who is fighting who! 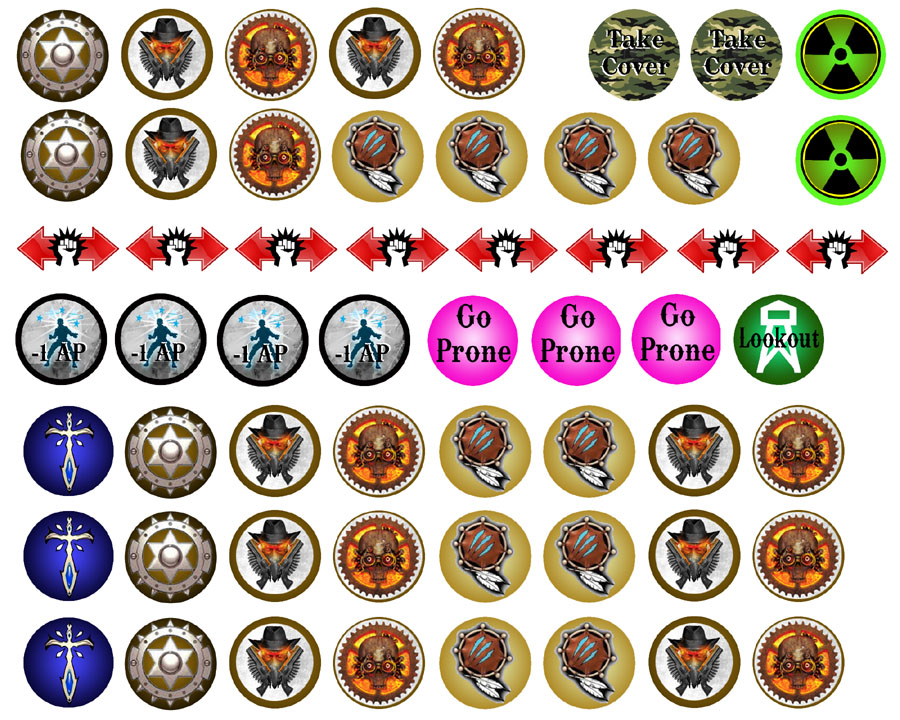 So, lots of action on the table... all I have out there are a few fire markers... 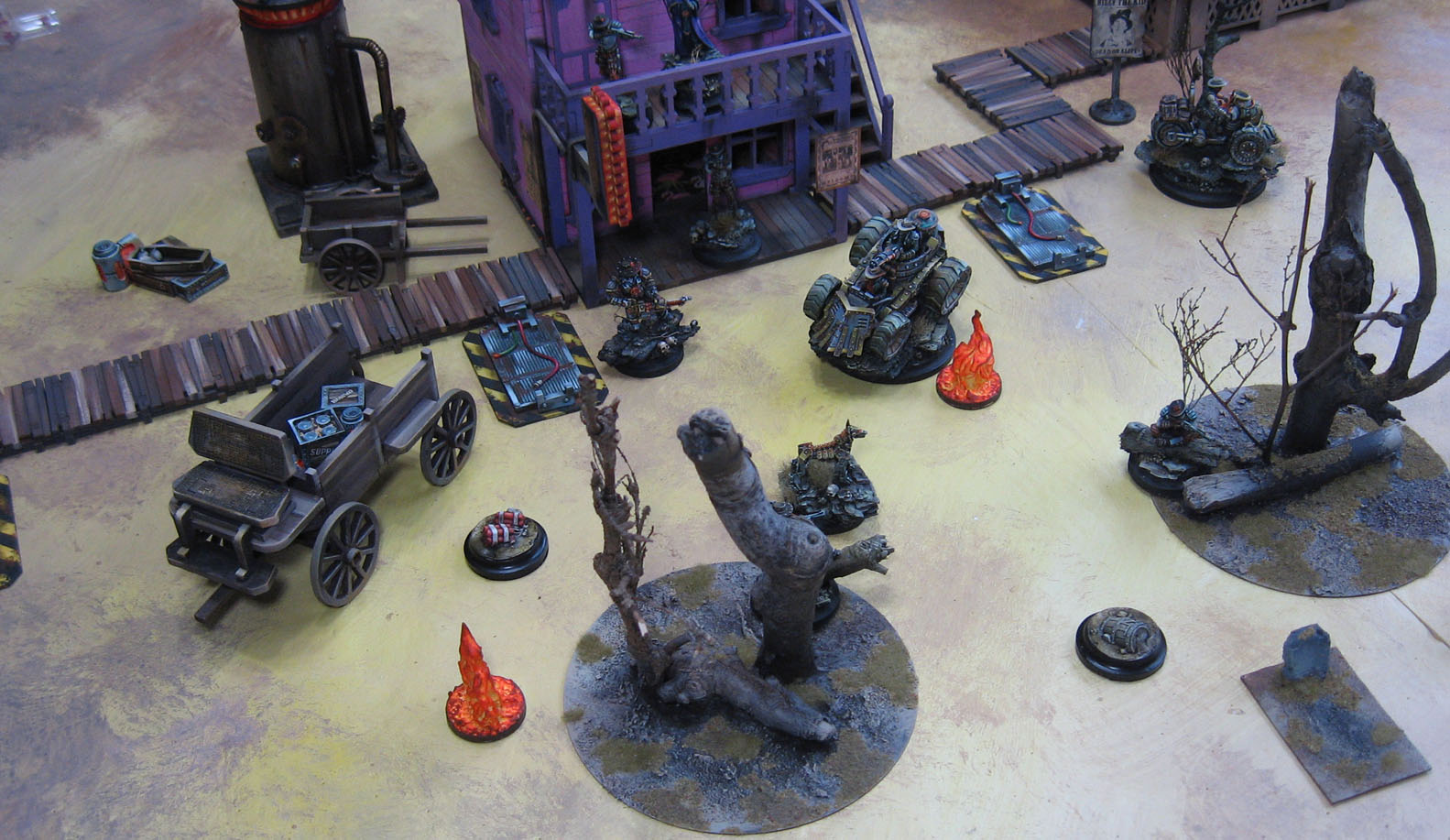 But now I am armed with a full supply of counters!!! 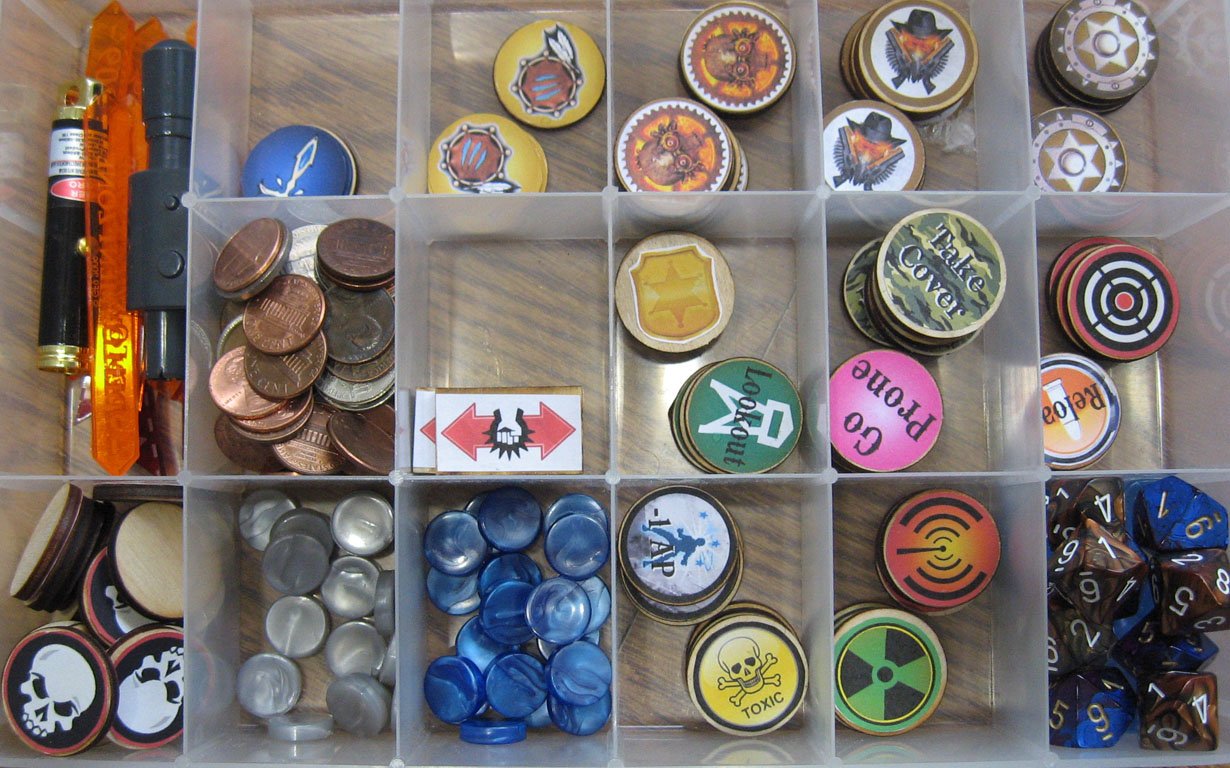 And what a difference it makes.  Now it just takes a quick glance to know exactly what's going on!! 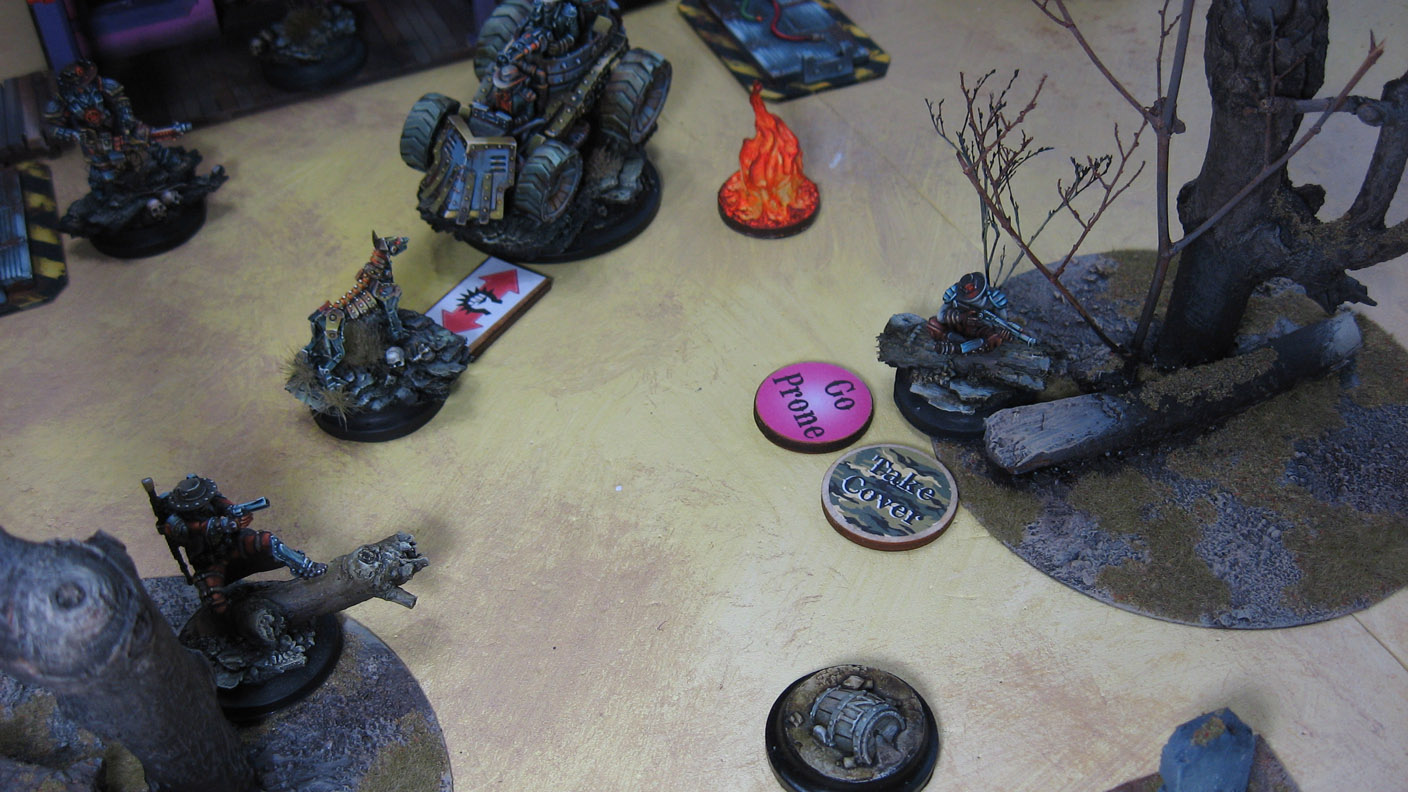 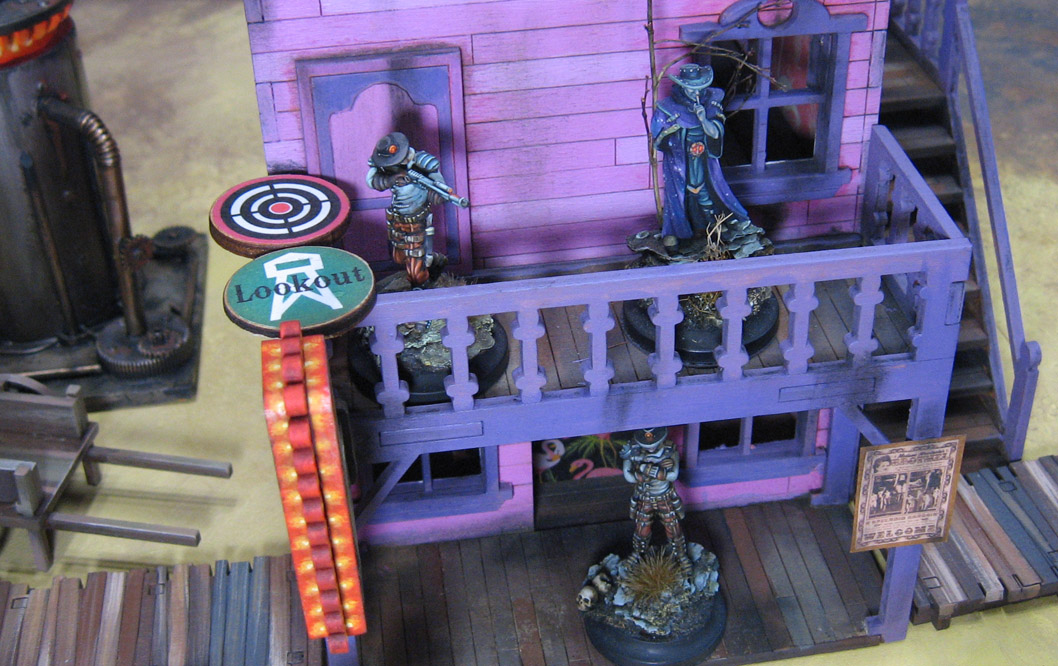 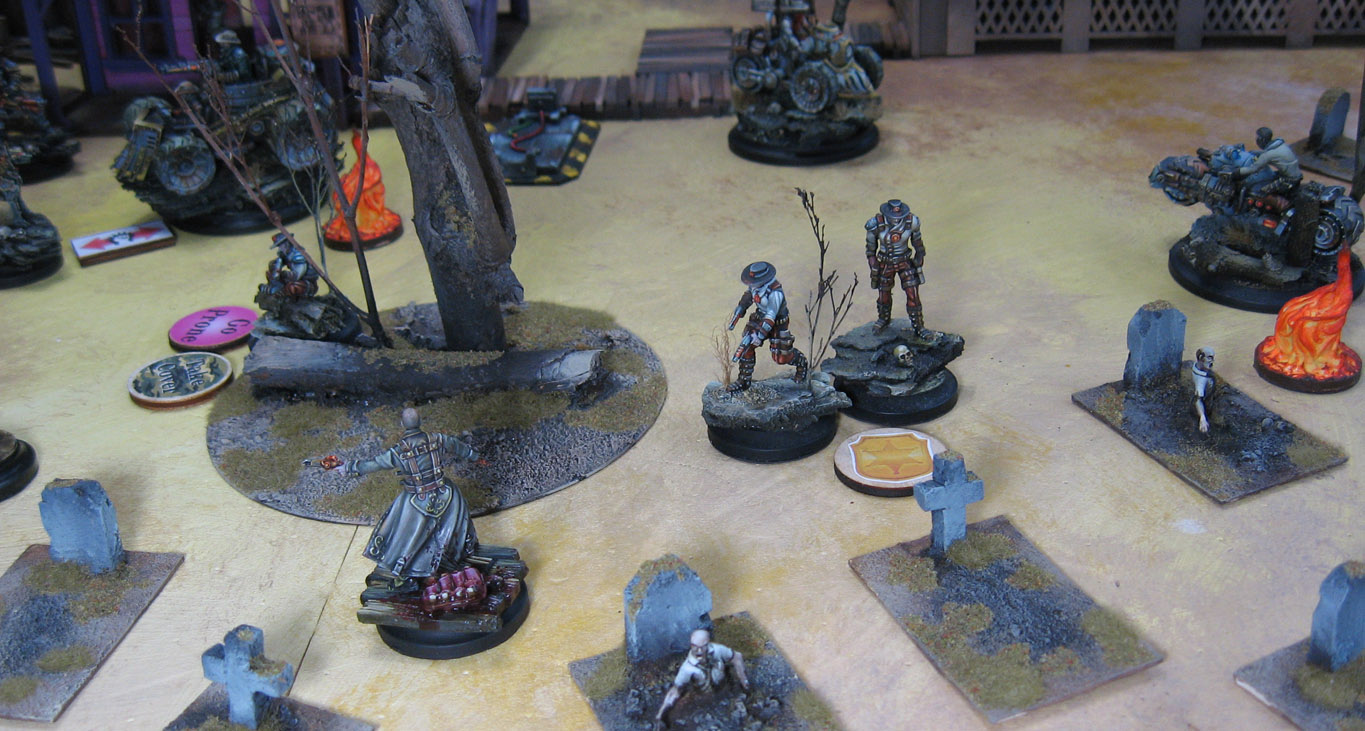 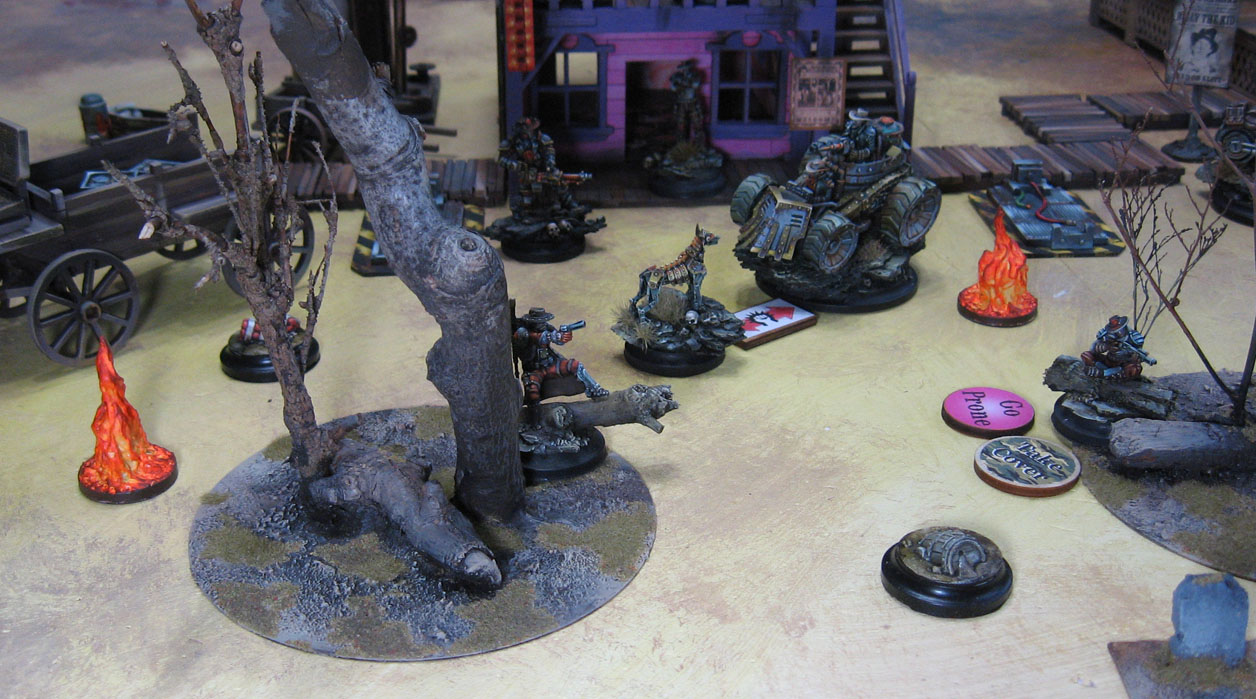 Posted by wappellious at 12:45 AM No comments: