The Tainted Pharaoh... and the scary box. 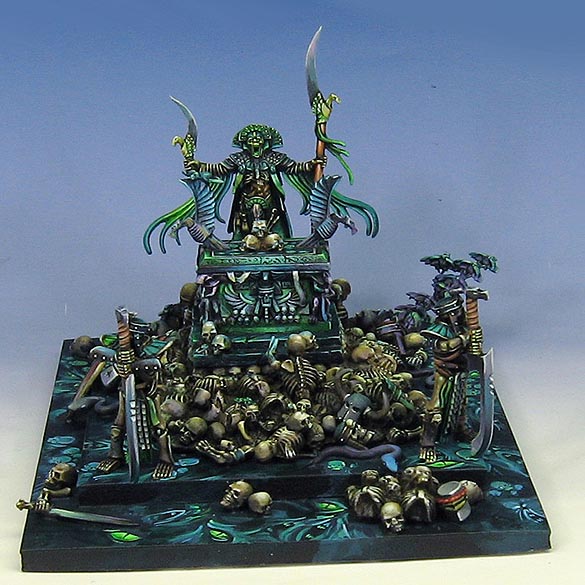 OK, since there are so many new faces here since the big run of Tomb Kings blog posts, I thought I would toss up a little reminder of the very first piece that I created for that army... The Casket of Souls! 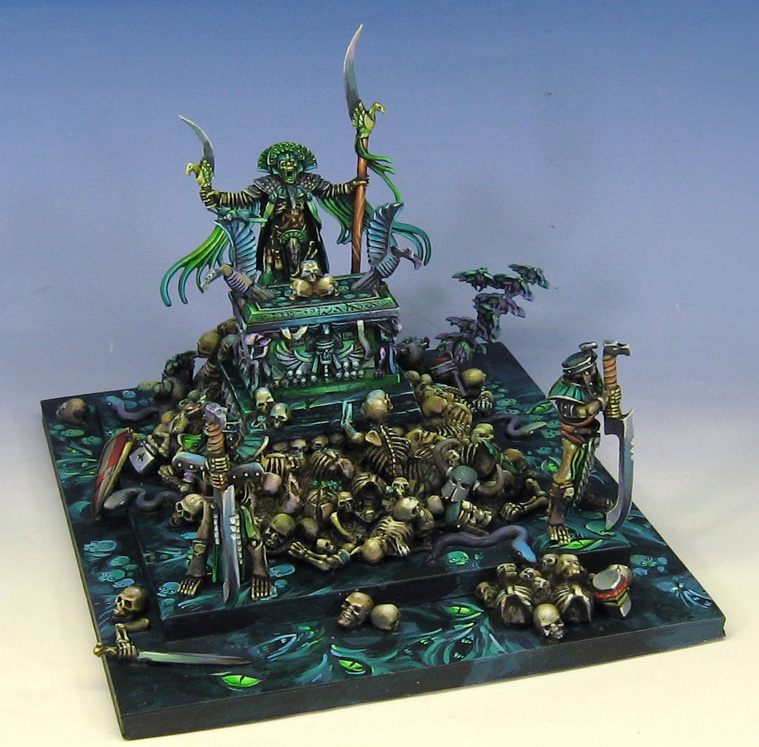 As you will learn, the whole idea of this army was to do something entirely different from all the gold, blue and red Tomb Kings armies out there!  I wracked my brains to come up with something.  Once I saw a PBS documentary on "The Silver Pharaoh", I thought I was onto something!! 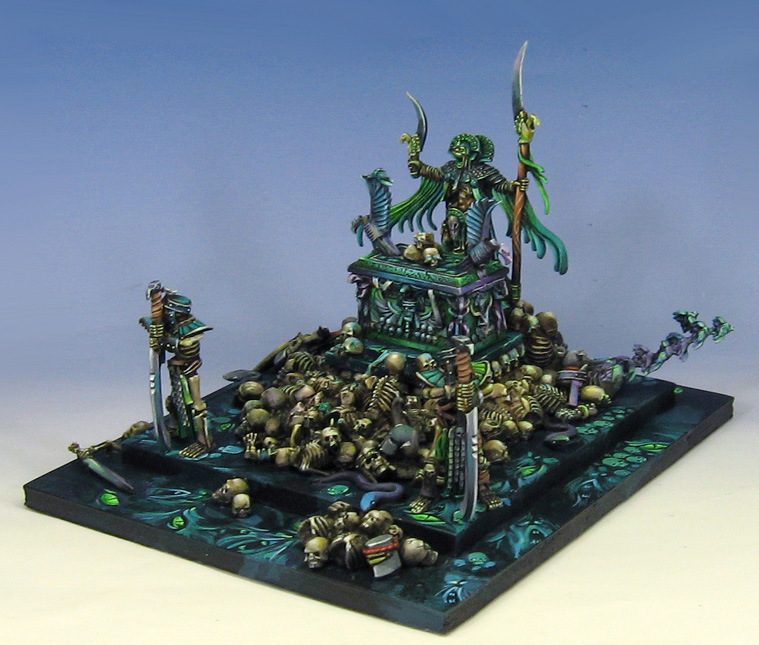 While the idea popped into my head of a silver army with Necron-esque neon green gems, my initial trials at playing the TK also modified the story quite a bit.  I had to come up with a reason why the army was virtually wiped out in every battle (aside from army books, of course!).

So, the idea of the Tainted Pharaoh emerged.  This Pharaoh has given his kingdom over to a Tzeentch god who has promised to make them human again in exchange for fealty. 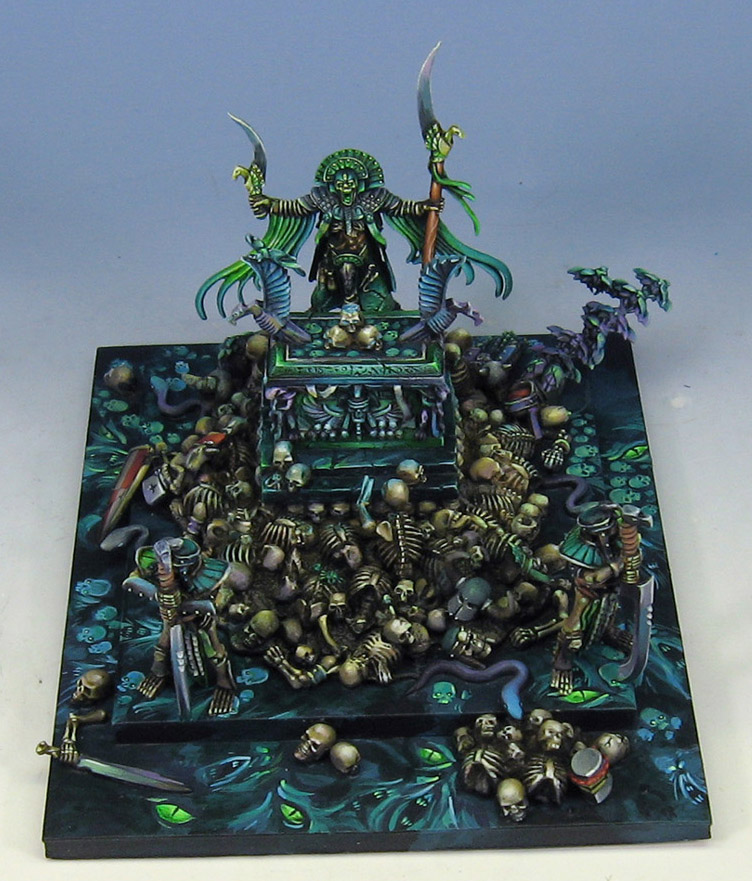 That is why all the floors are demon marble, and everything glows with sickly pallor.  Anything that was gold is now morphed into quicksilver, changing colors constantly.  I will try to post some links on the story in a bit... 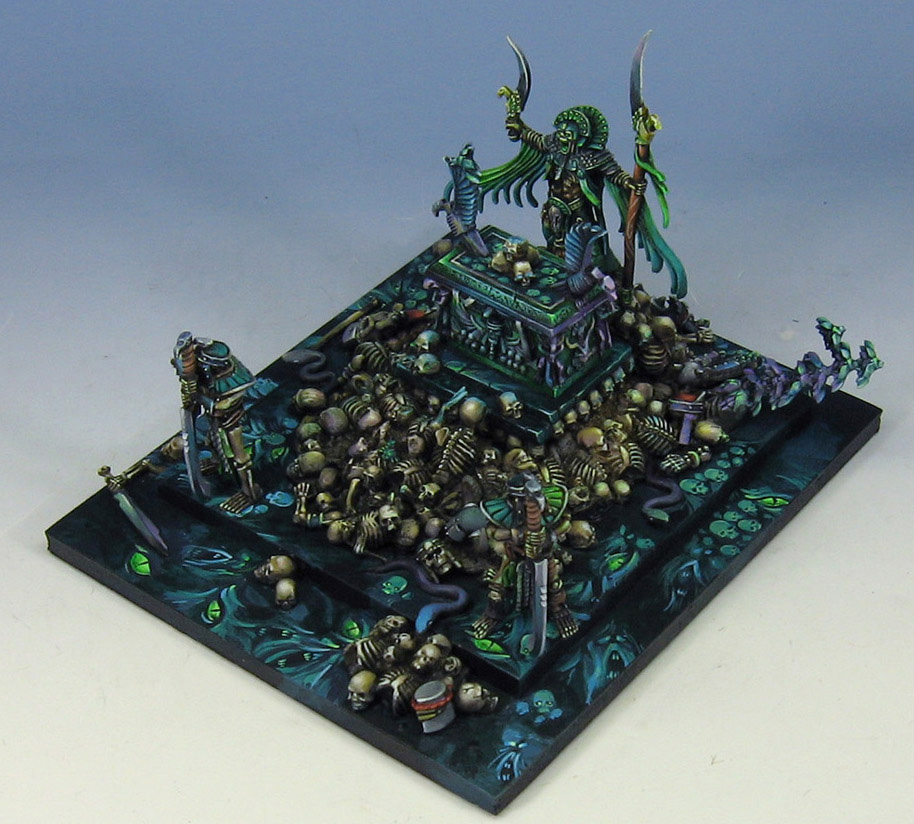 There are a number of Bretonnian bits in this piece, as that army was supposed to be the next in line, and it had a direct relationship with this one. 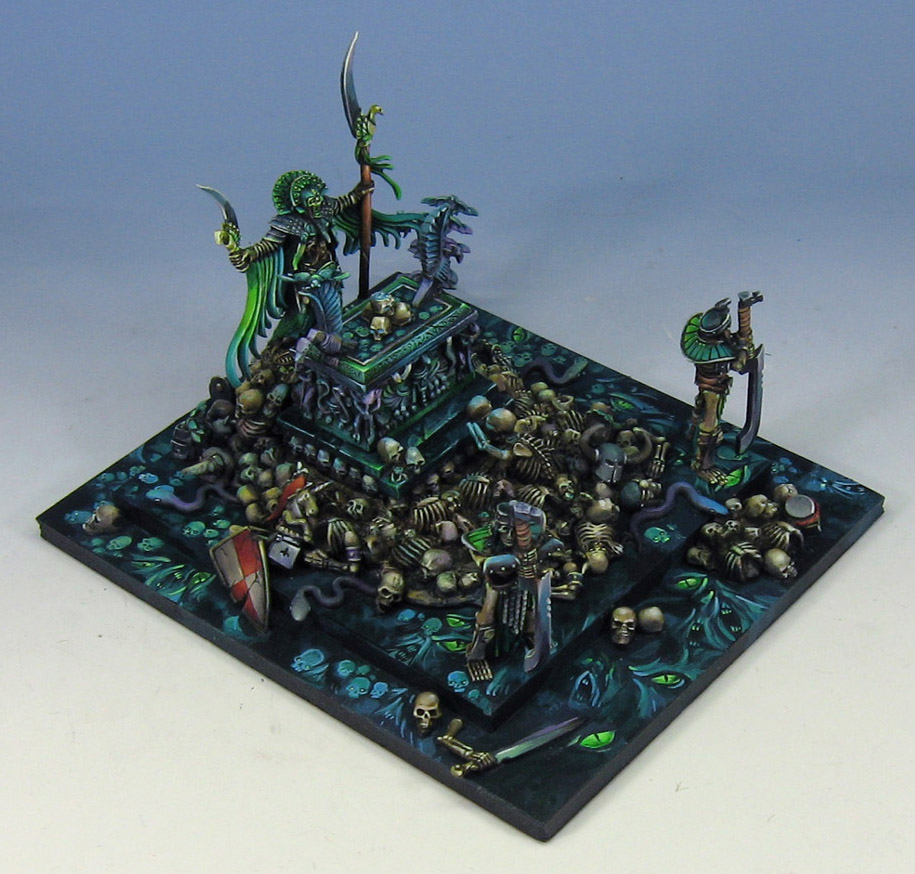 This was also my first use of the Vallejo fluorescents.  That really is an amazing paint product! 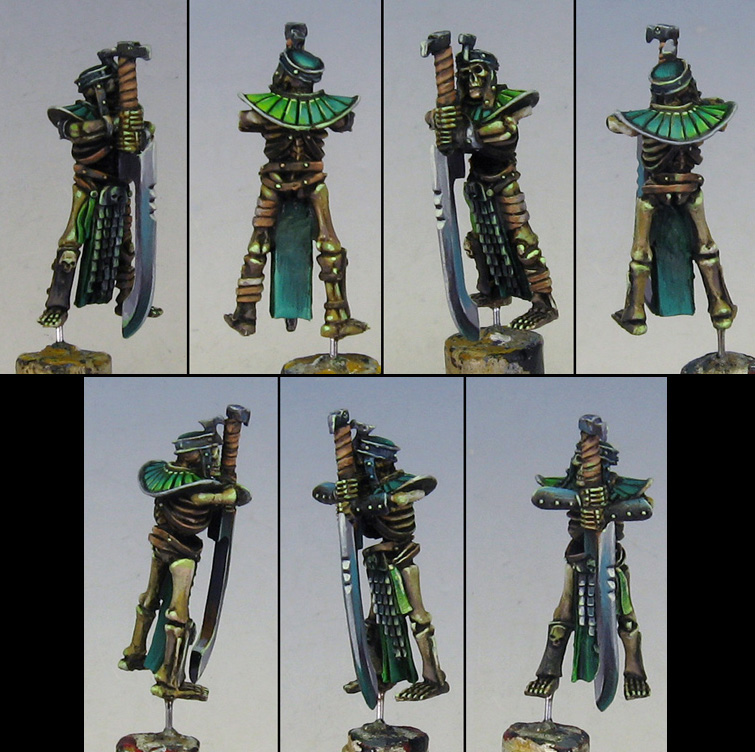 And some shots of the base... 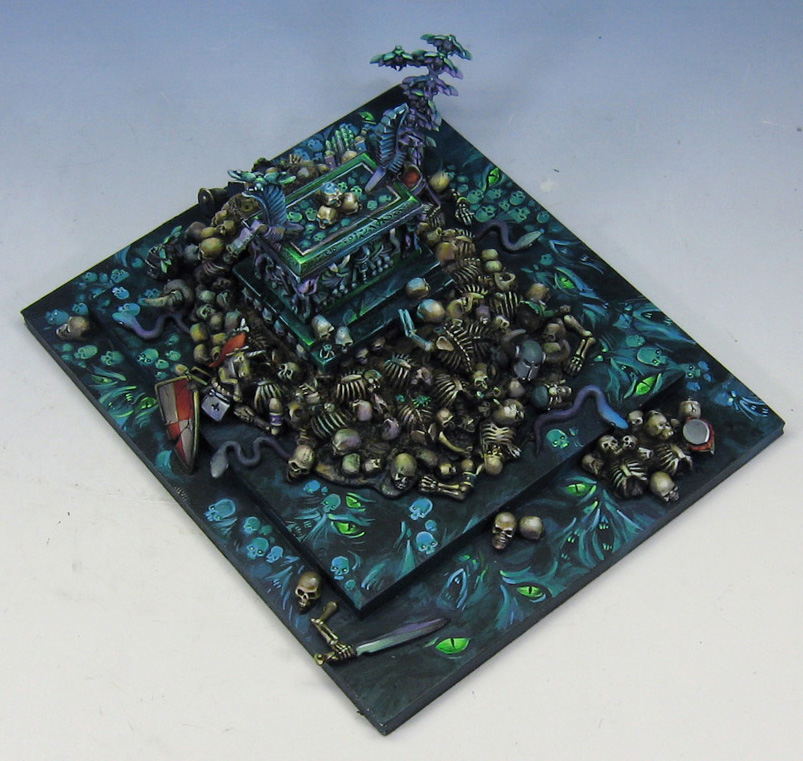 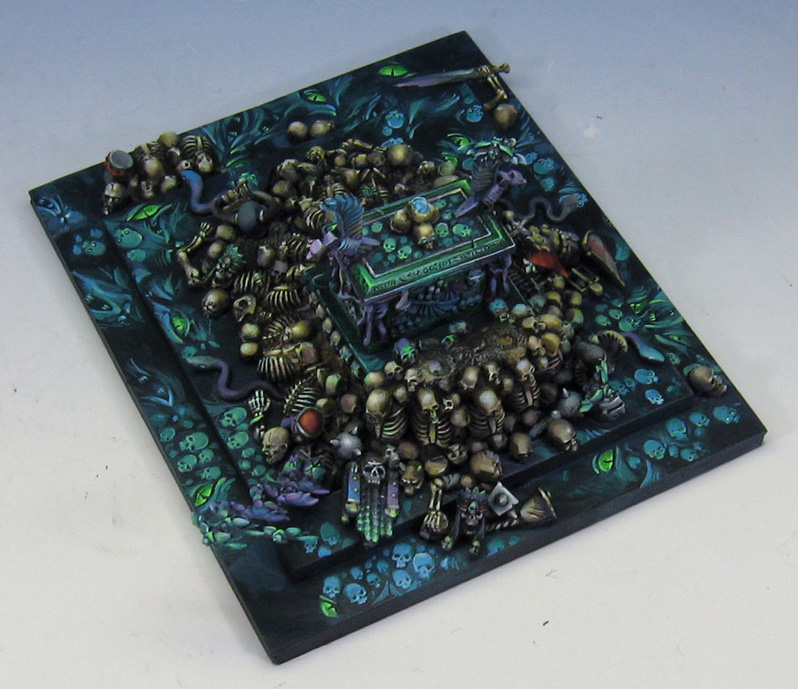 Adapting this color scheme to everything in the army proved to be quite interesting!

If you look at the column on the left here, you will run across a tag of all the Tomb King posts. 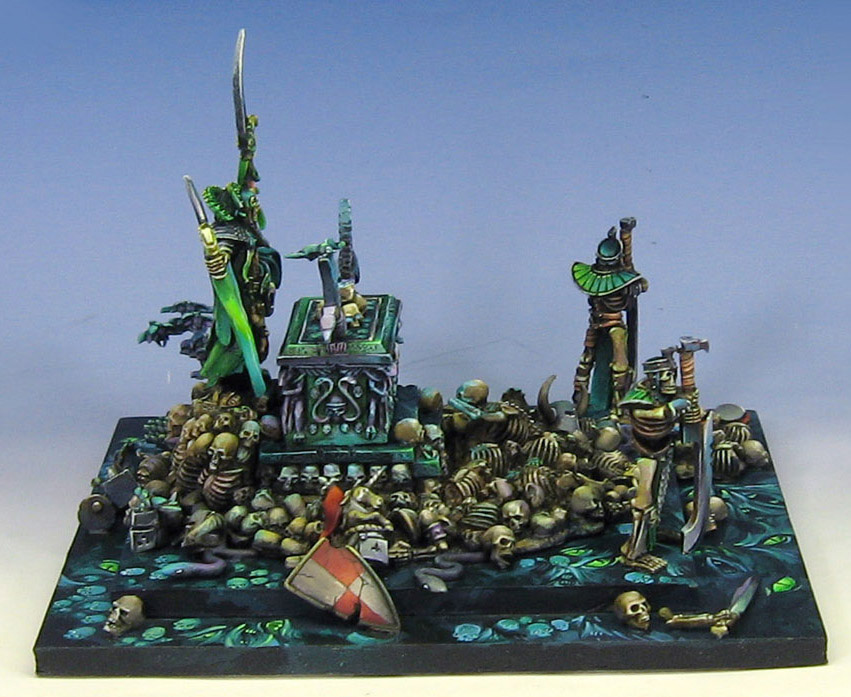 There's lots of see, with step by step painting, converting sculpting, and even terrain building! 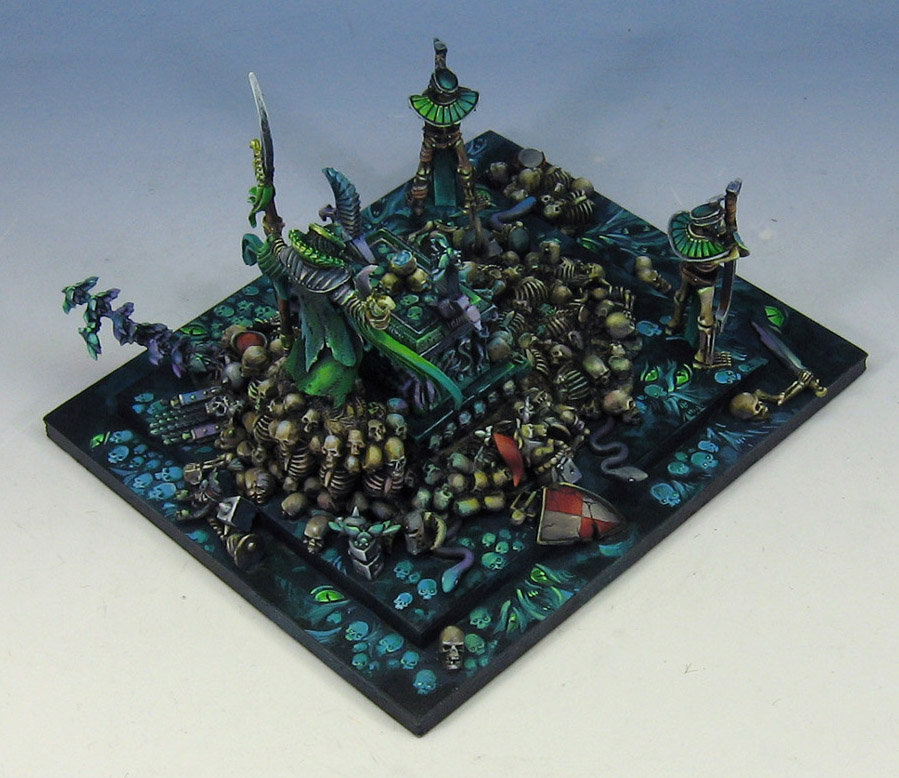 I developed a ton of new techniques in the creation of this army, which really was the whole purpose in doing it!! 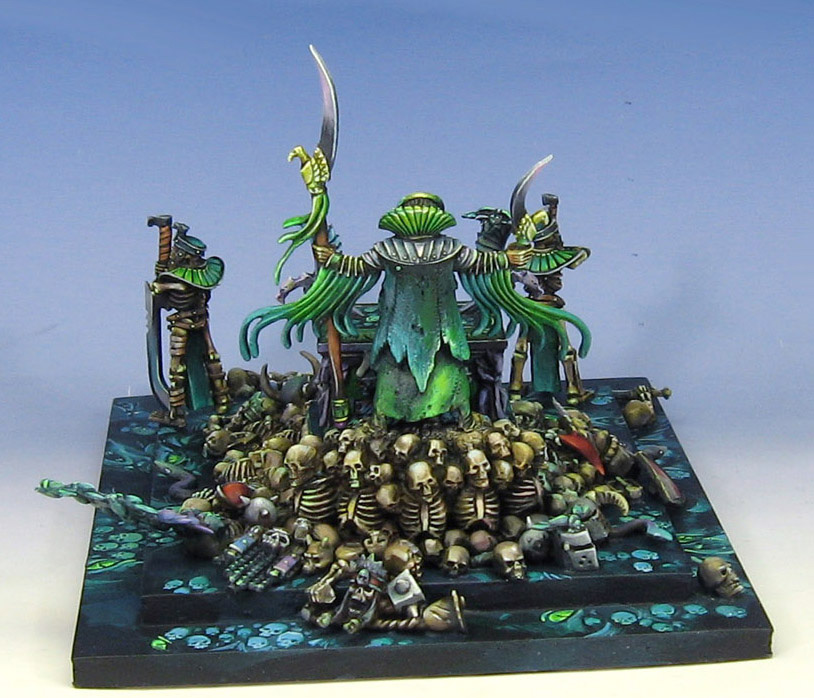 I hope that you enjoy exploring the forbidden and corrupt realm of the Tainted Pharaoh!!!! 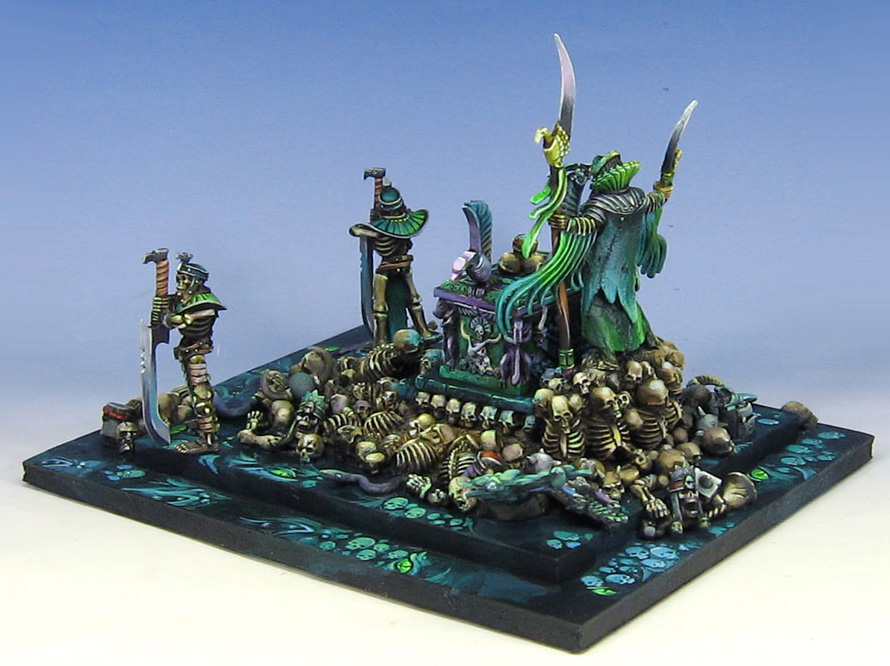 Here's the story behind the army: 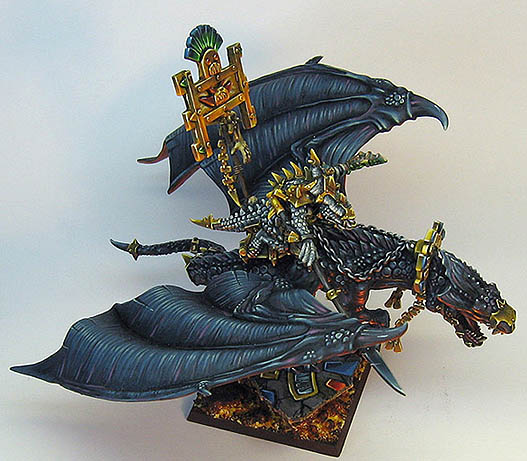 Here is a special Blog Anniversary piece.  Like Mage Priest Babo a few years before, this heavy duty conversion won a Bronze Demon in the Monster category at a Games Day!

There was a lot to do on this piece, that's for sure. 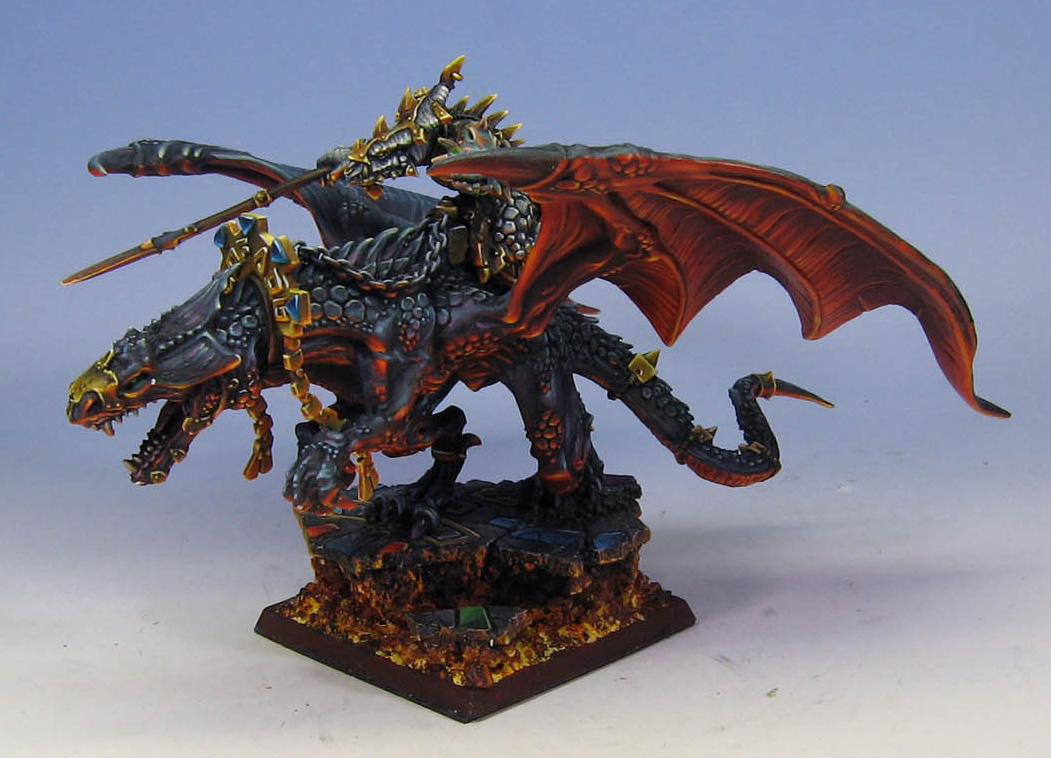 The wings did require a lot of bracing, and a fair bit of sculpting to make them blend in.  What actually too more time to create, however, was the head crest decoration (featuring Loq Gar's name, of course!) and the banner. 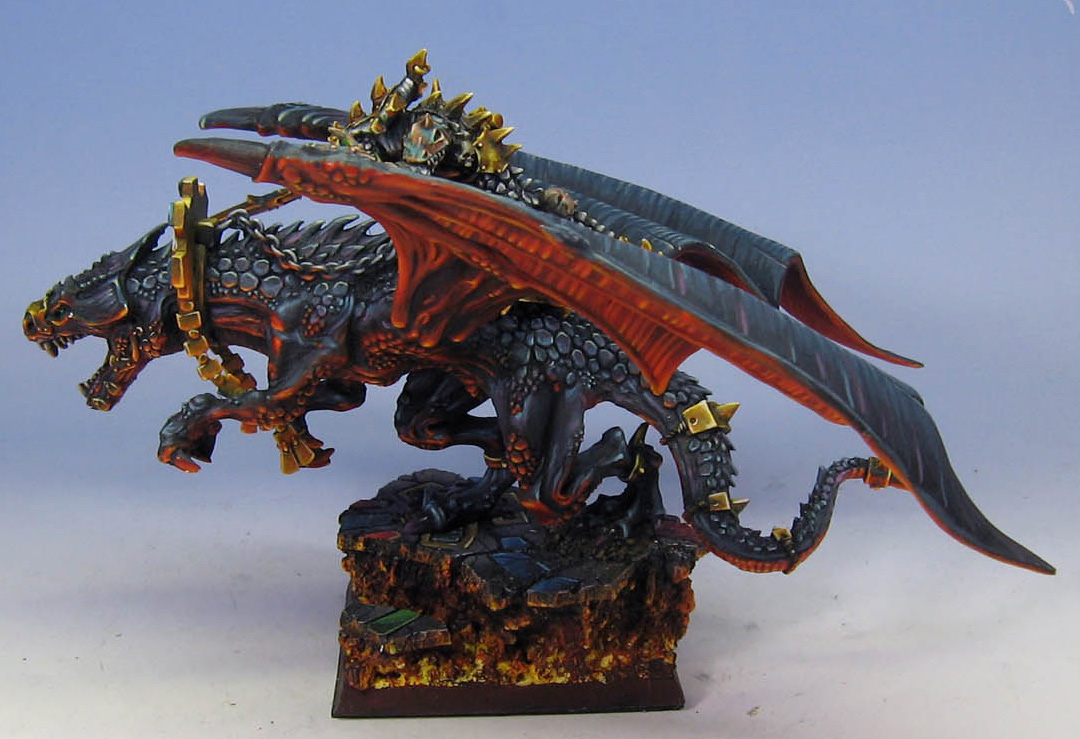 Those items were fashioned from plasticard, green stuff, and bitz.  I usually keep the banner aside, since it can get a little hairy when things get into those multiple combats (now that terror means almost nothing... lookin' at you, BSB re-roll...) 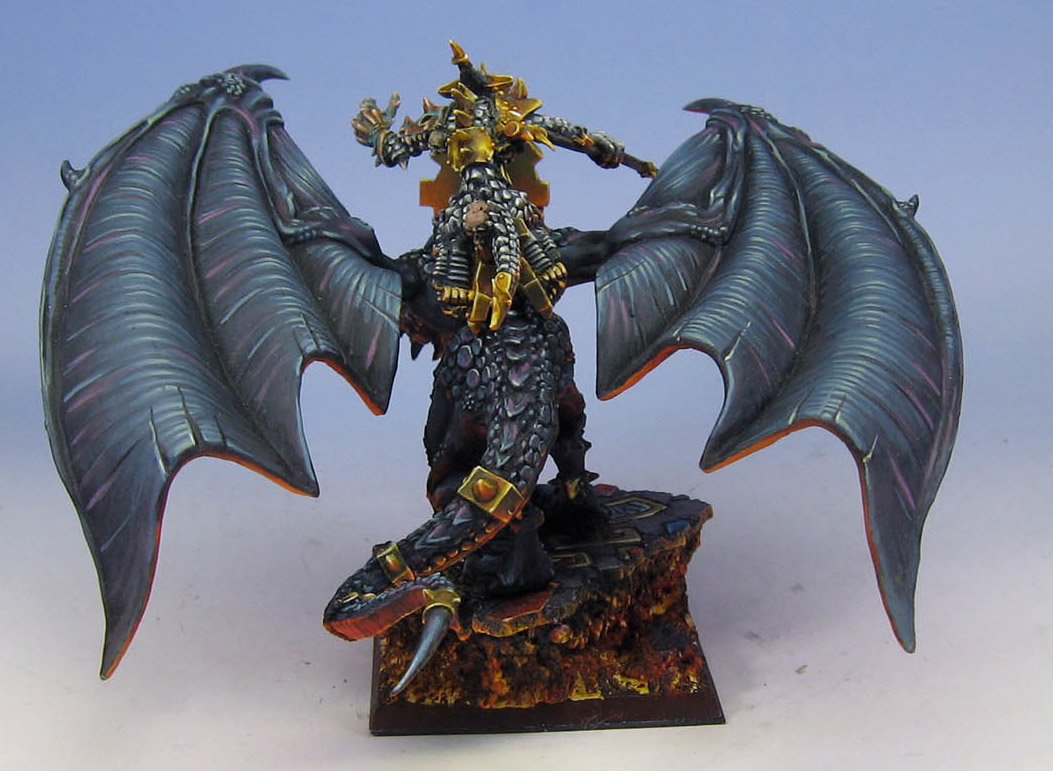 Anyway, once all the converting was done.  It was time to paint!  When I first began this guy, it was the 'old' edition of lizards, with spawnings.  I was going to color code my spawned saurus... green to move through terrain, a blue for amphibious, and black for ITP.  Nothing says "I ain't scared" like a blue/black lizard walking across lava!

So, this was the army general, with an obvious tie in to that particular spawning. 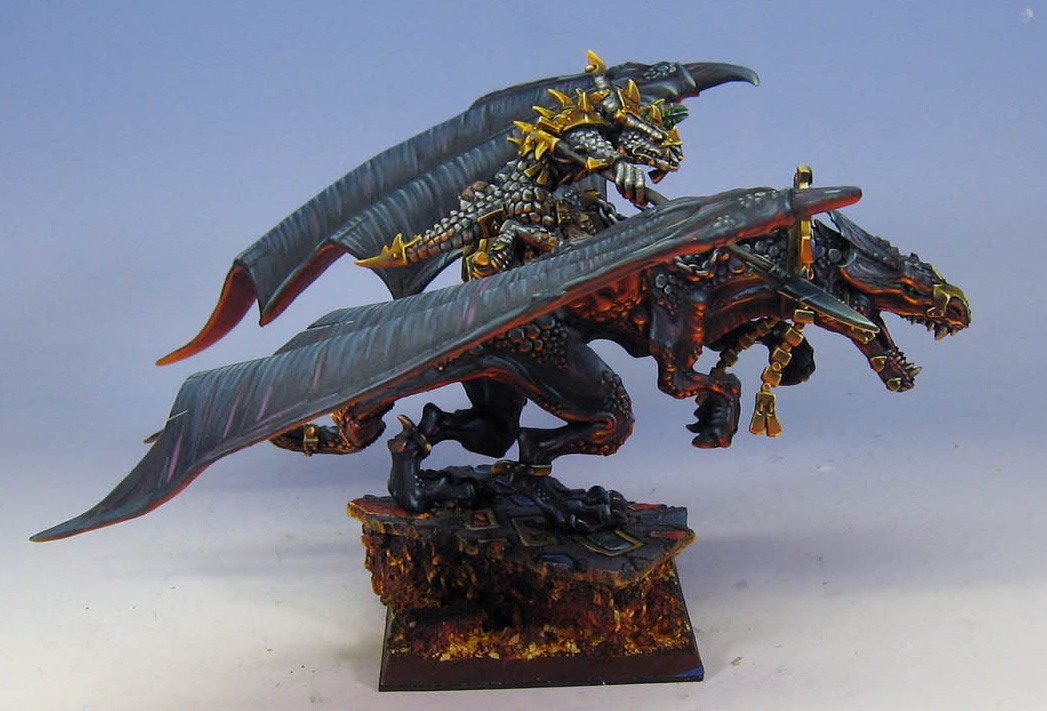 I wanted to get as many cool colors in as I could, so that the lava reflections would really stand out. 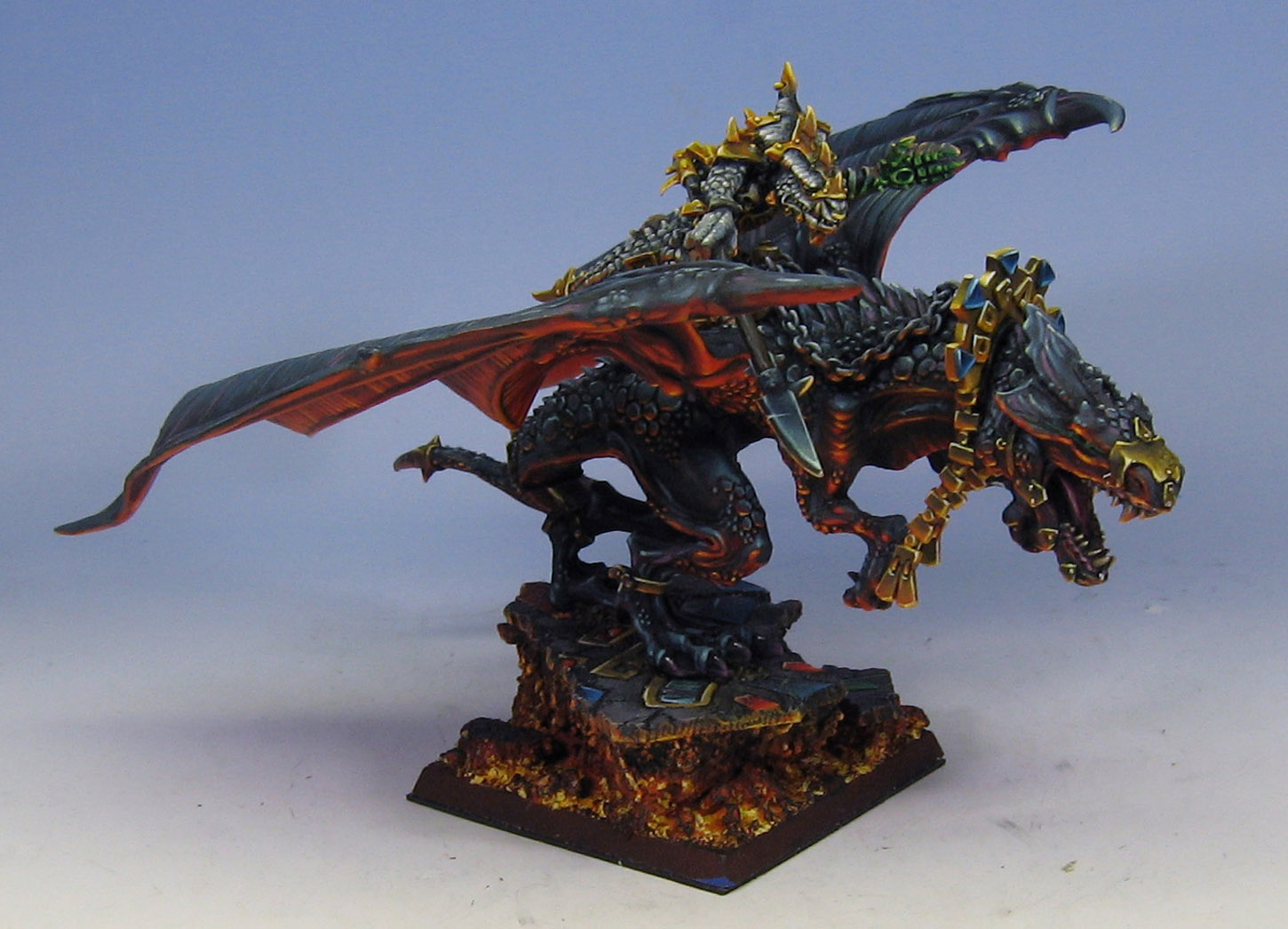 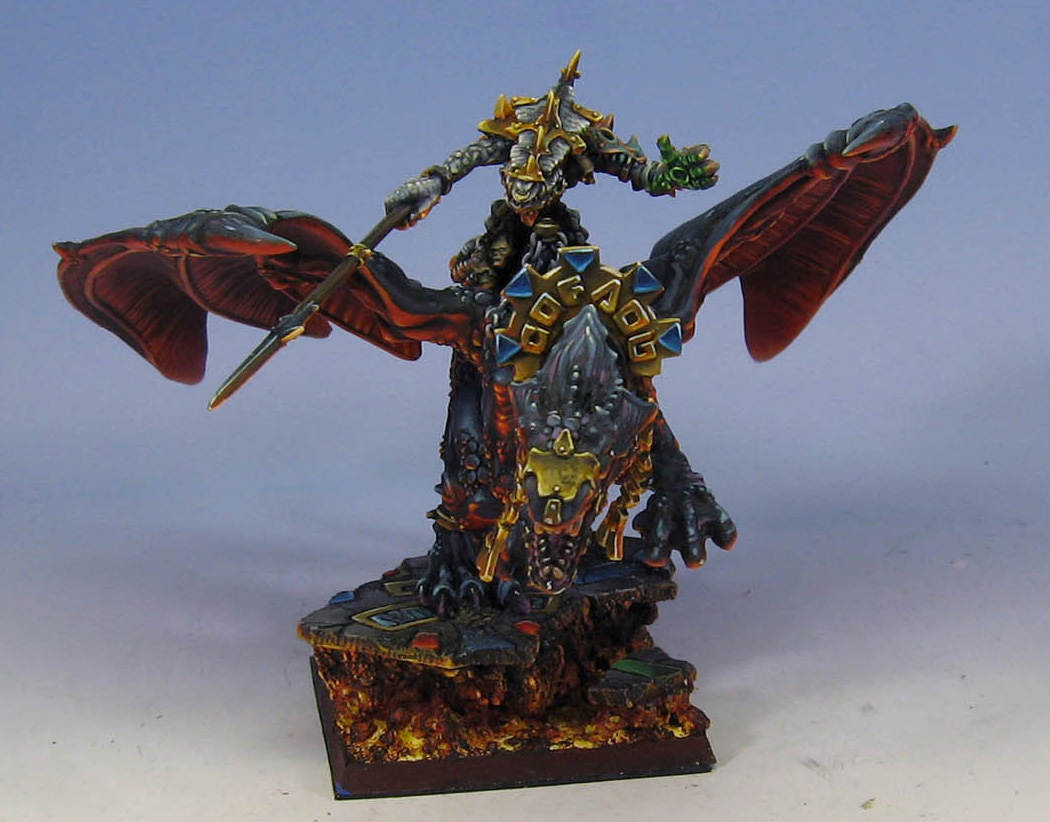 I still tried to keep some color variations on the wings, as you can see by the purples that were incorporated here and there... 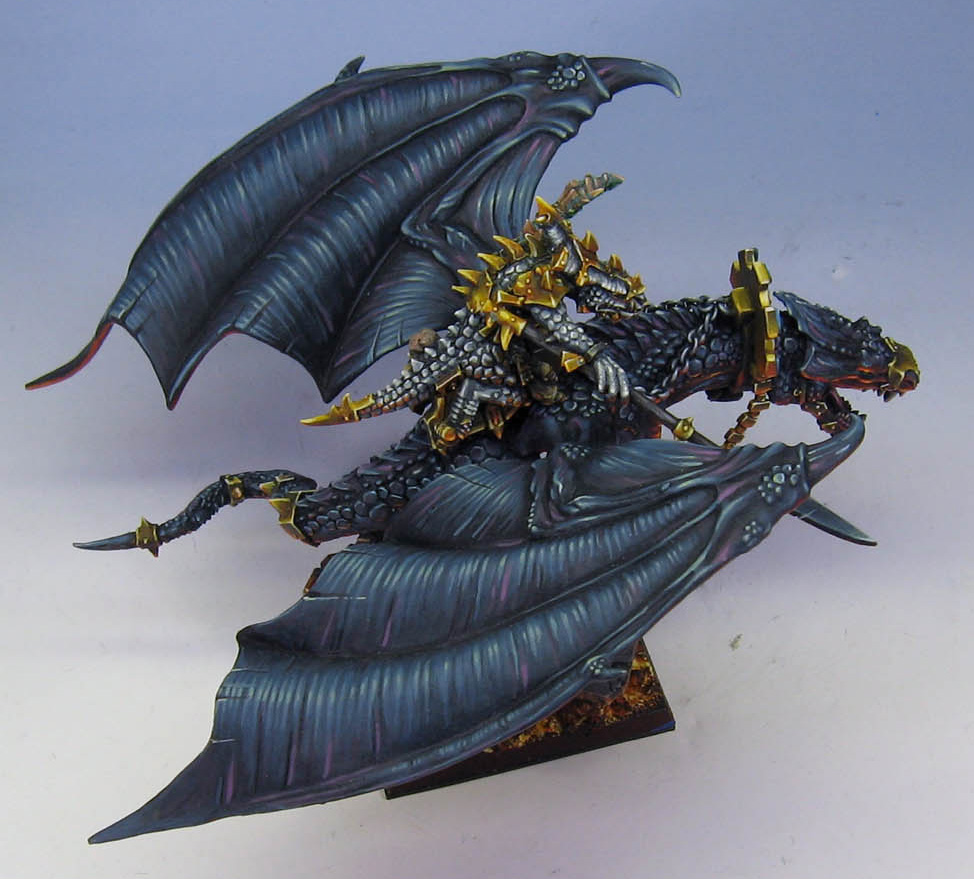 This rare view really lets you see all that work! 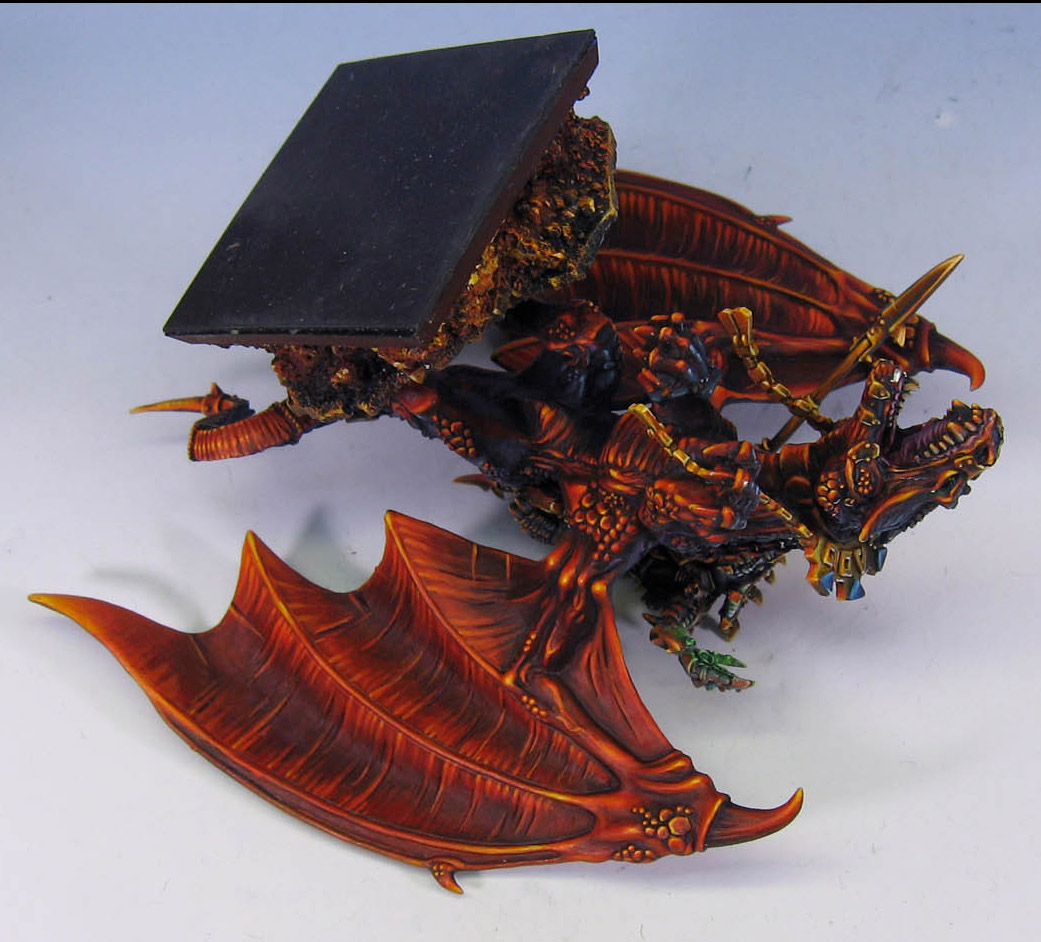 Loq Gar also made the Top Ten on CMON, which was probably out of fear!!! 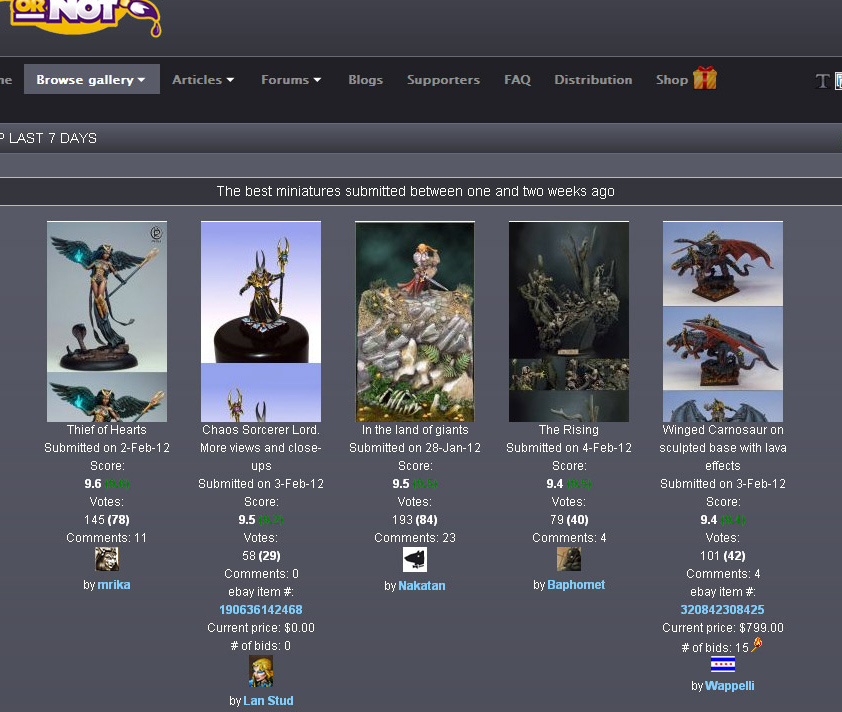 Only hours remain in the kickstarter!  Last chance!