Ghosts of the Past 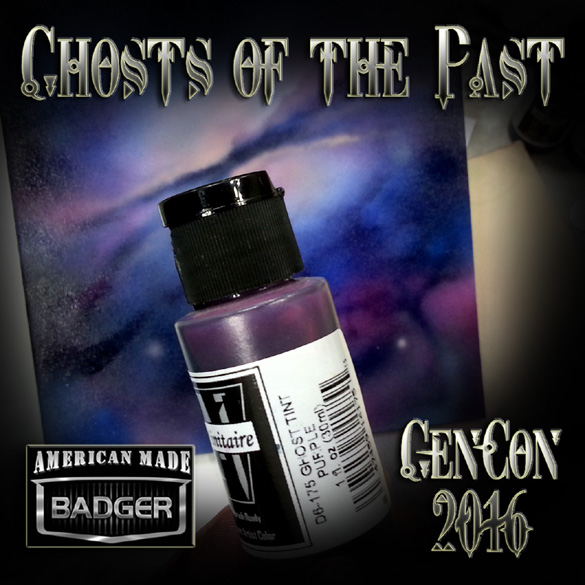 Now that we are back from GenCon, I can get down to the business of rebuilding the studio which was mangled in the frenzy of GenCon prep :-)

I can also show some images that I was able to get from my time in the Badger Airbrush booth!  Cory was very generous with his booth space for me in the Witchborn Booth, as was Ken.

Of course, the first night in town we must claim a slice of that territory for our own... and "Wappelize" it! 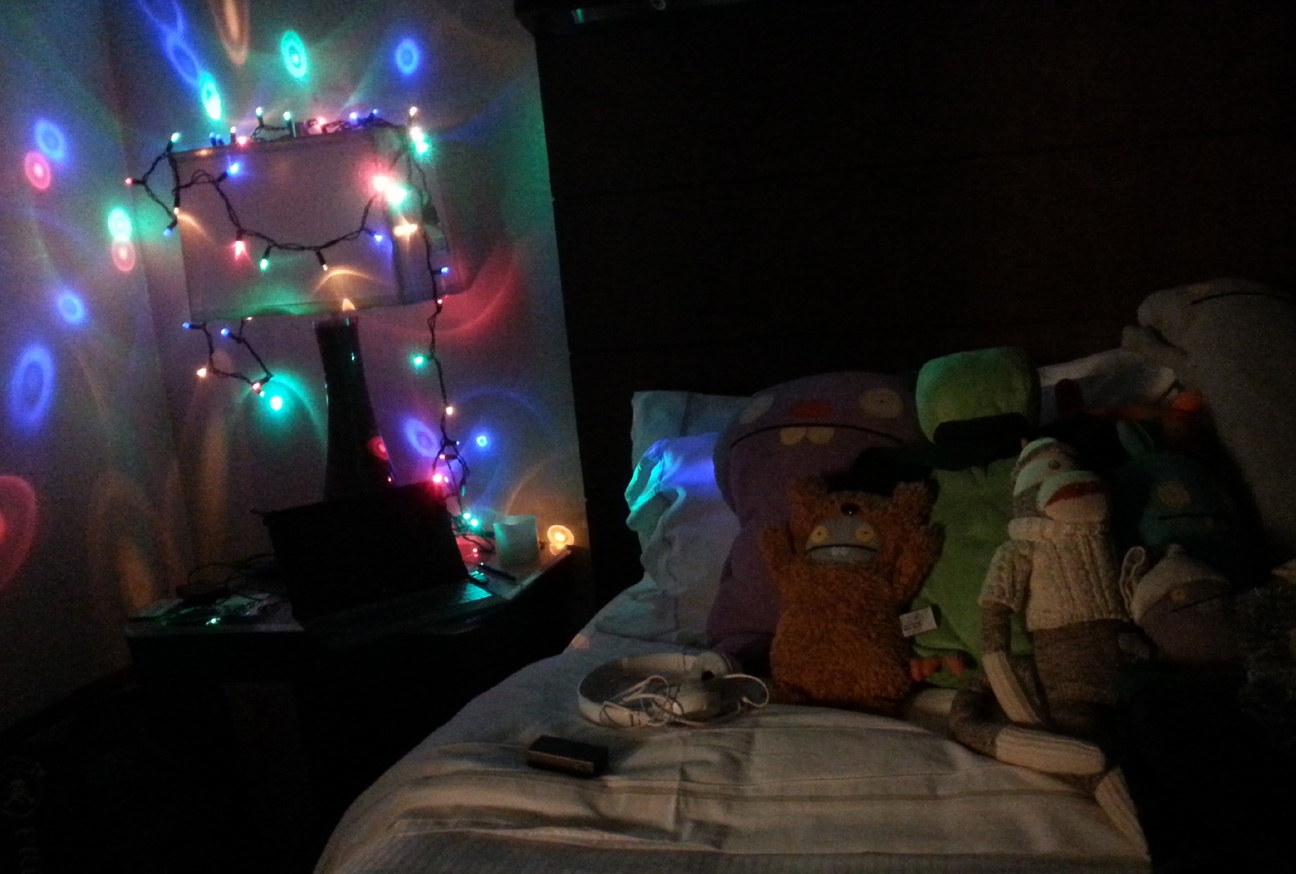 Then it was down to business Thursday afternoon.  After Caleb had done his nifty tank demos in the booth, I sat down to do something that I knew I hadn't done in a while... painting spacescapes with an airbrush.

After some recollection and some calculating, I realized that it had been 17 years since I had last done one of these!  Yikes... it started to become Total Recall at a certain point.

In addition to this huge time gap, I thought that I would experiment with the Ghost tints, to see how closely they would resemble my old Dr. Martin's dyes that I used to employ on my watercolor spacescapes. 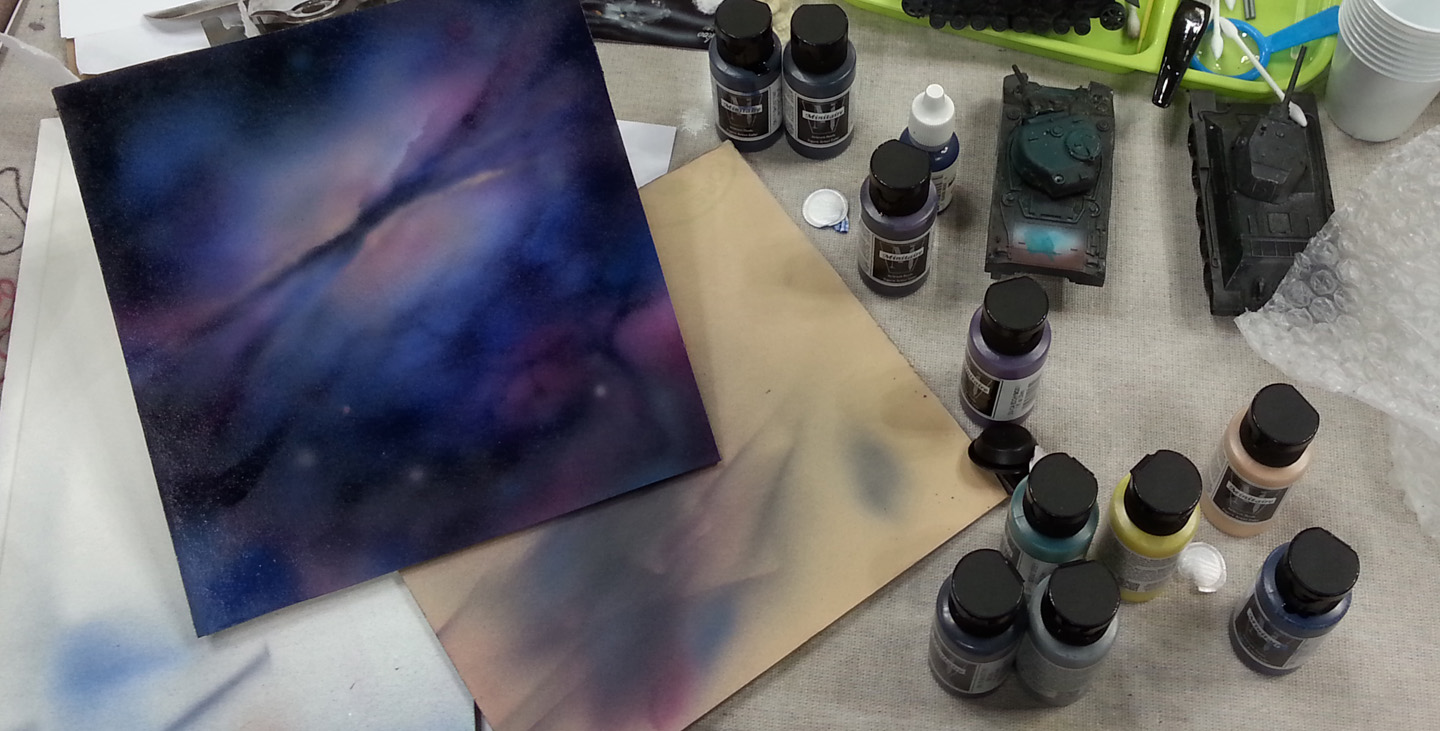 I hadn't gotten to try the new Extreme Patriot brush yet, so I used that all weekend long.  To make the brushes easier to switch out, they all had the quick change devices on them, which is a very nifty gadget!  I wants me one too! 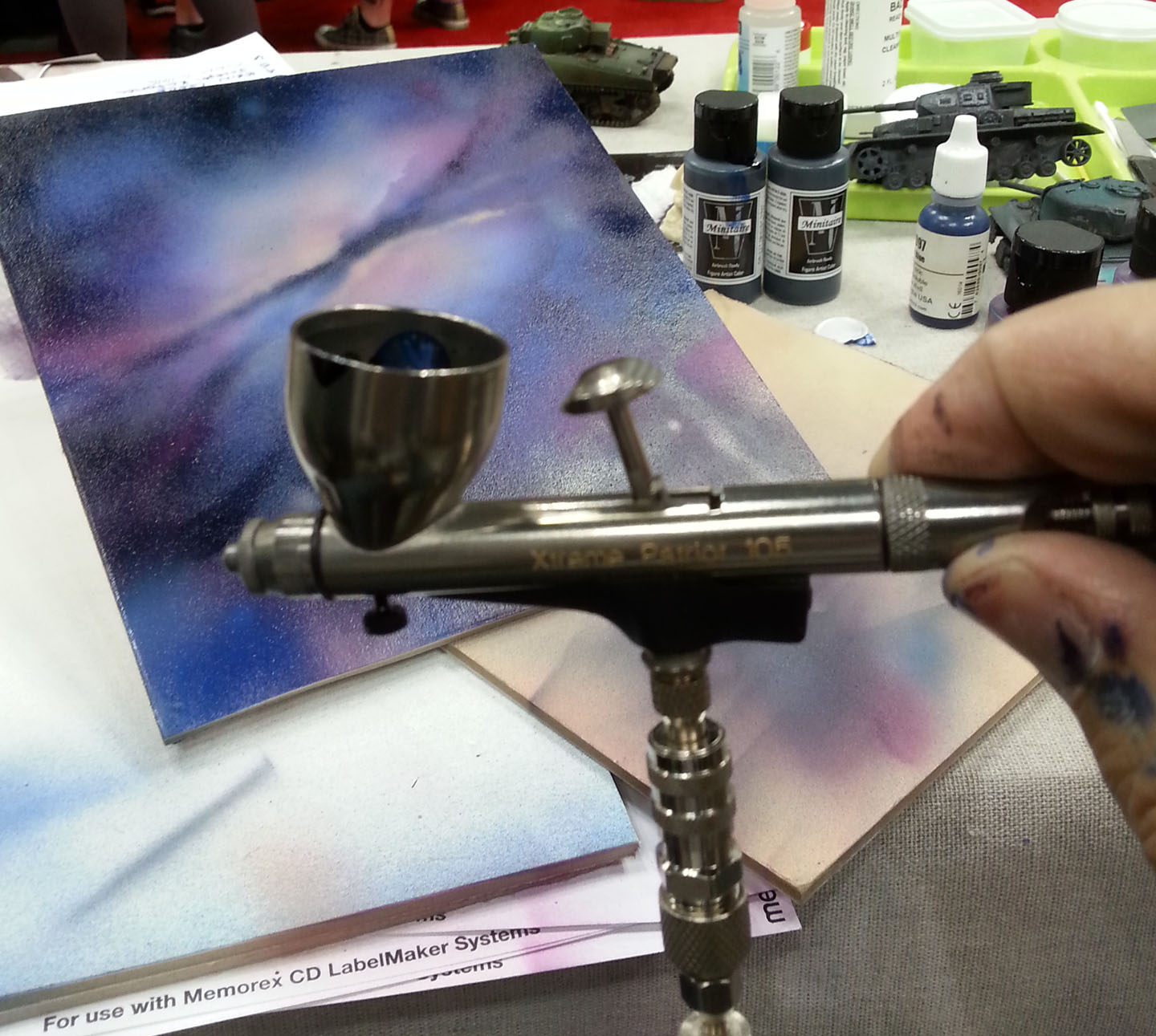 And here is the Ghost Tint.  I think there are at least ten or twelve in the set, with a huge range of colors.  They are super transparent, but the color is very intense and saturated.  This is what made me think of the Dr. Martin's dyes.

However, the Ghost tints are acrylic, so they can never be damaged by water like the old dyes! 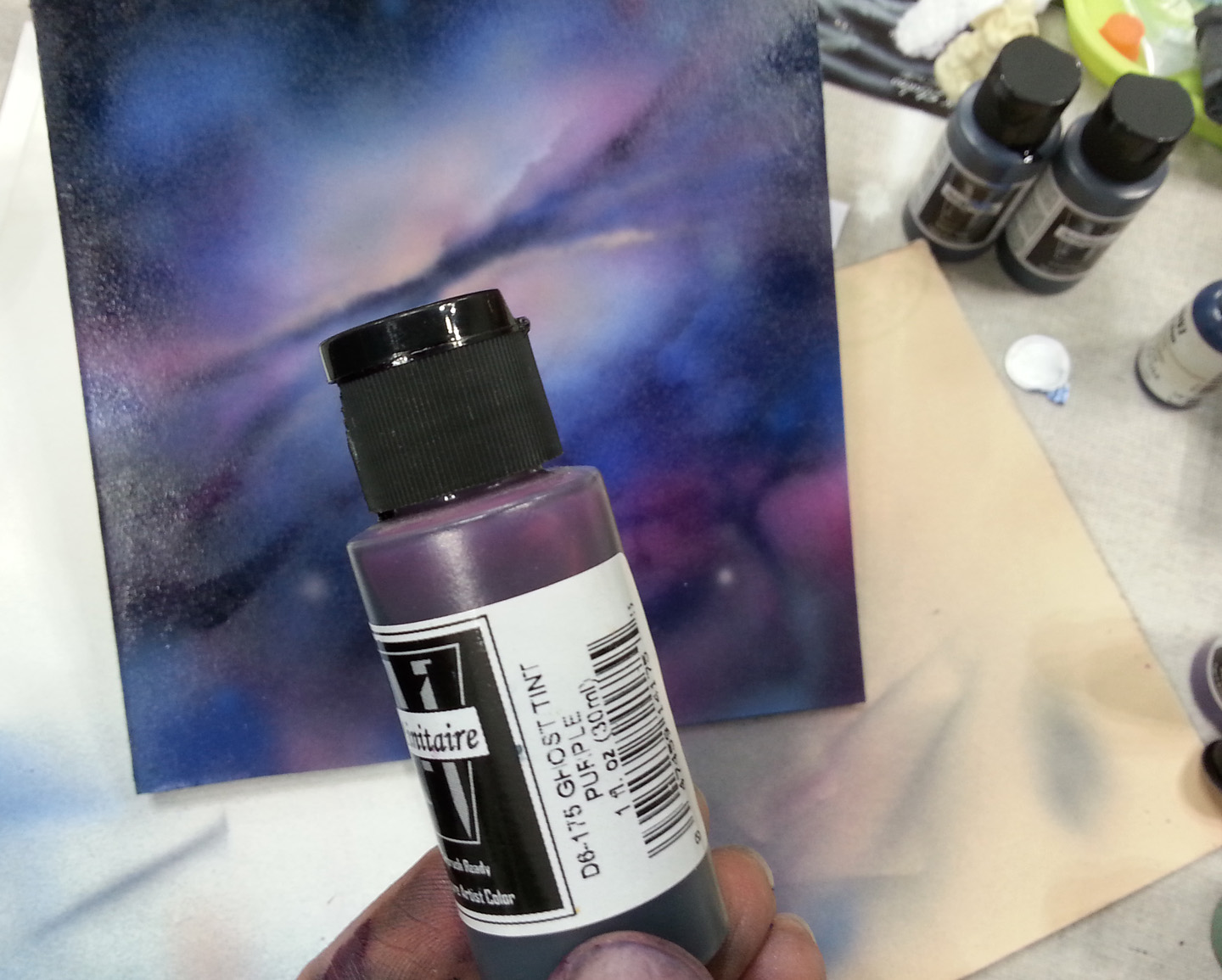 I fooled around with the various blues and purples, starting over a piece of white hot press watercolor board.  I let the transparency of the Ghost tints work for me, building from light to dark with each pass.  I loved the Midnight Blue tone for getting the deepest darks. 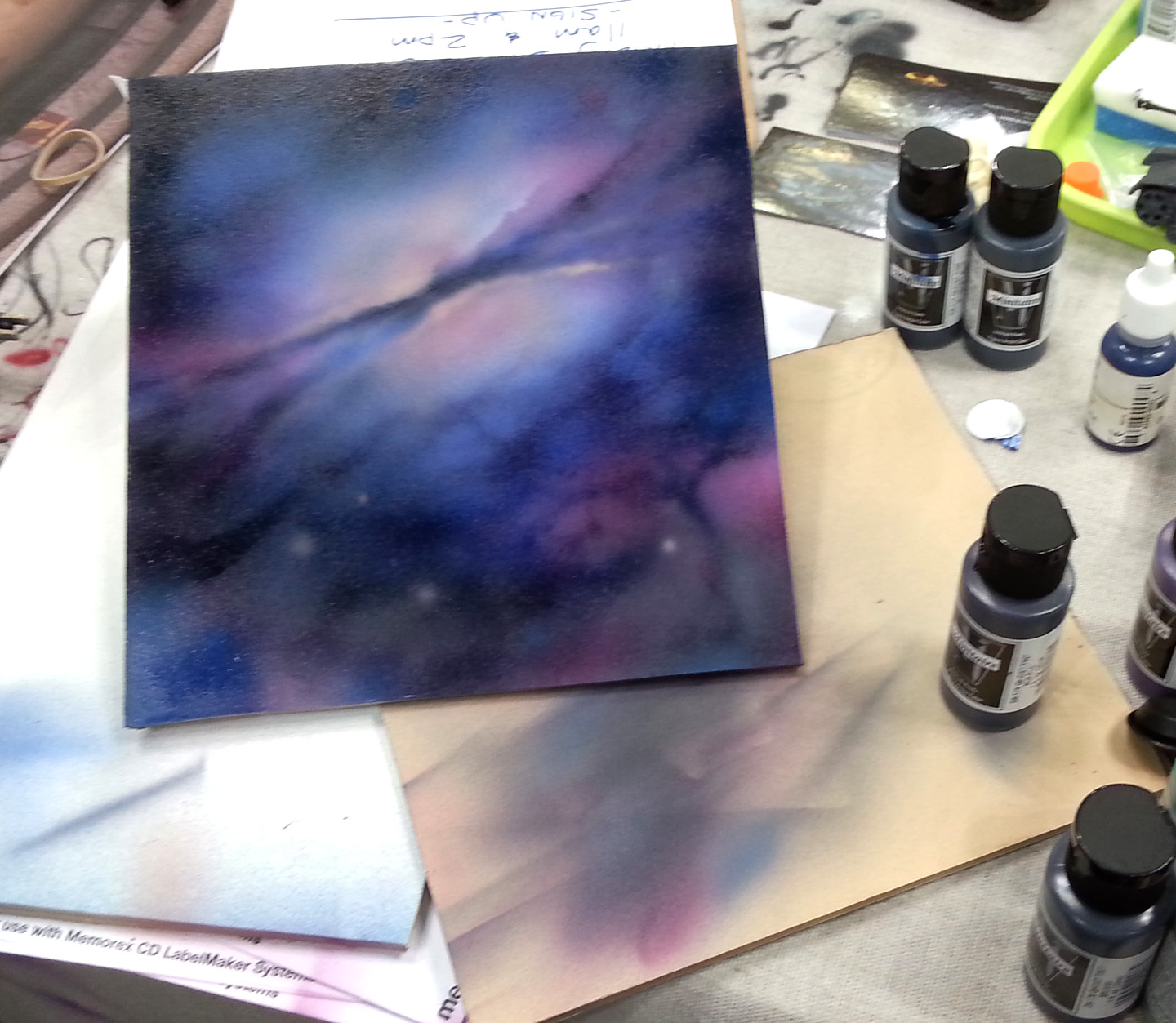 I also tested out a few tricks, such as mixing lighter opaque colors with the Ghost tints.  This worked out very well... even better than the same tactic with the old dyes.

They also work well with a brush, and can even be blended with your finger. 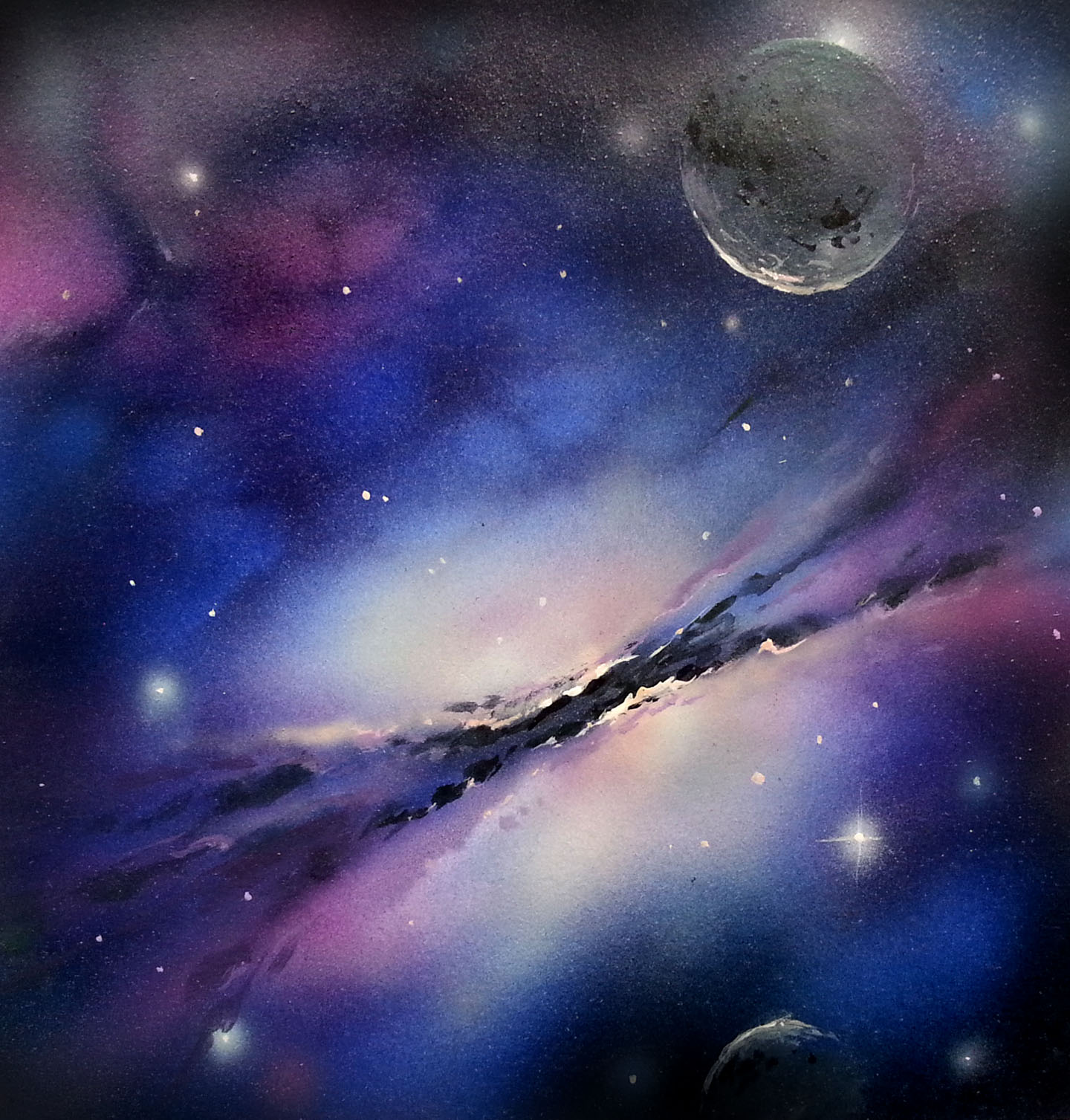 This also became an impromptu art lesson, so we tried to do the "Composition Game" by spinning the piece around.  It was a trick that I was taught many years ago.  You take your painting and hold it up to a mirror or upside down, etc., and see what the arrangement of the shapes, light and dark pattens, etc., will look like.

It should be just as interesting from any angle or view, even if it doesn't make "sense".  That's a quick and easy way to see how well balanced your composition is!

On Friday I decided to try a new tack on the brushwork by adding a planet, as well as seeing if I could do the spectral glow around the smaller stars. 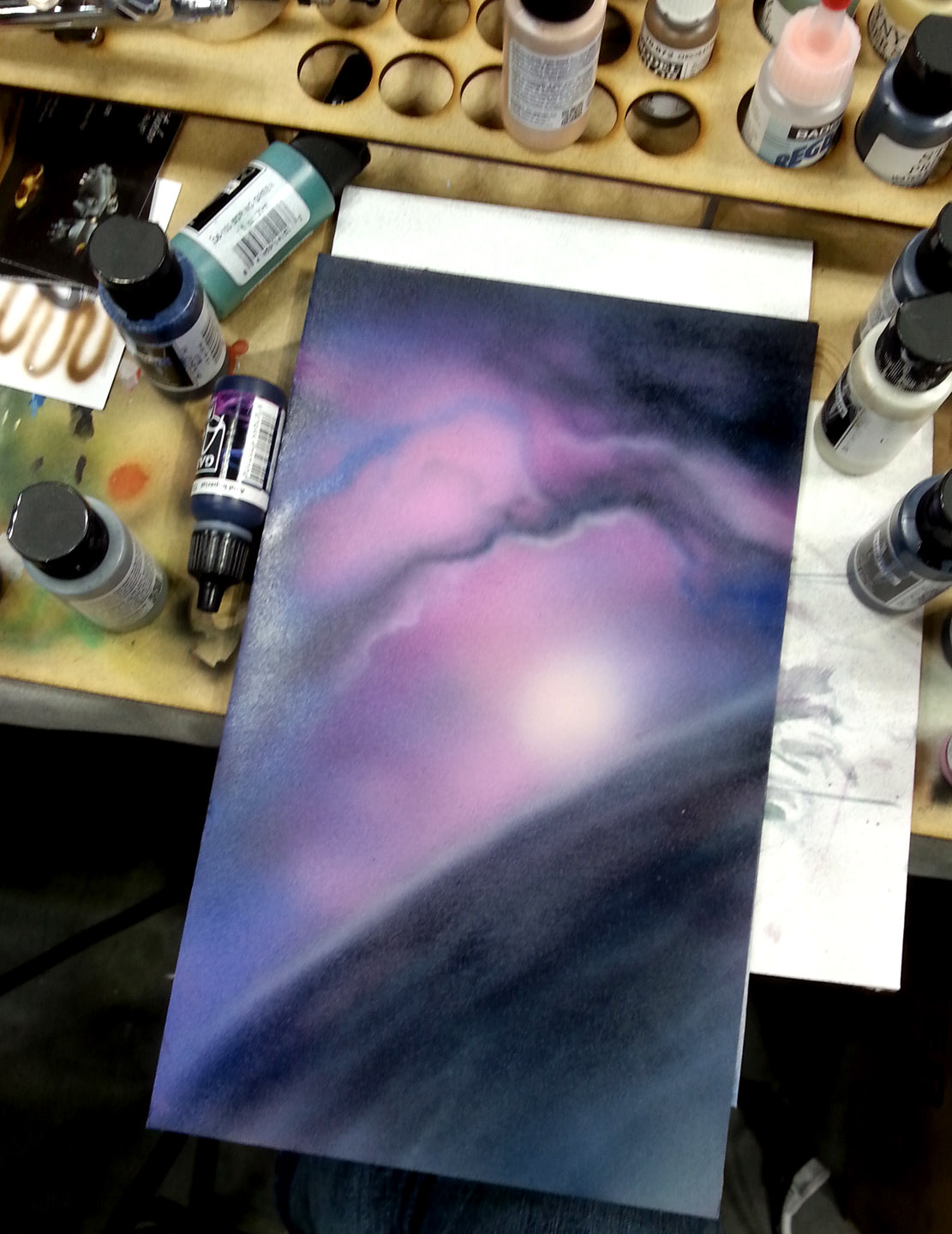 This is another quick demo within a demo, where I tried to show how the Ghost Tints can even be mixed with regular airbrush paints, and even non airbrush paints!

You can see how many incredible colors I was able to create by mixing in the Dried Blood Ghost tint with a bit of sienna 'regular' paint.  Very rich, very intense, and perfect for future minis!! 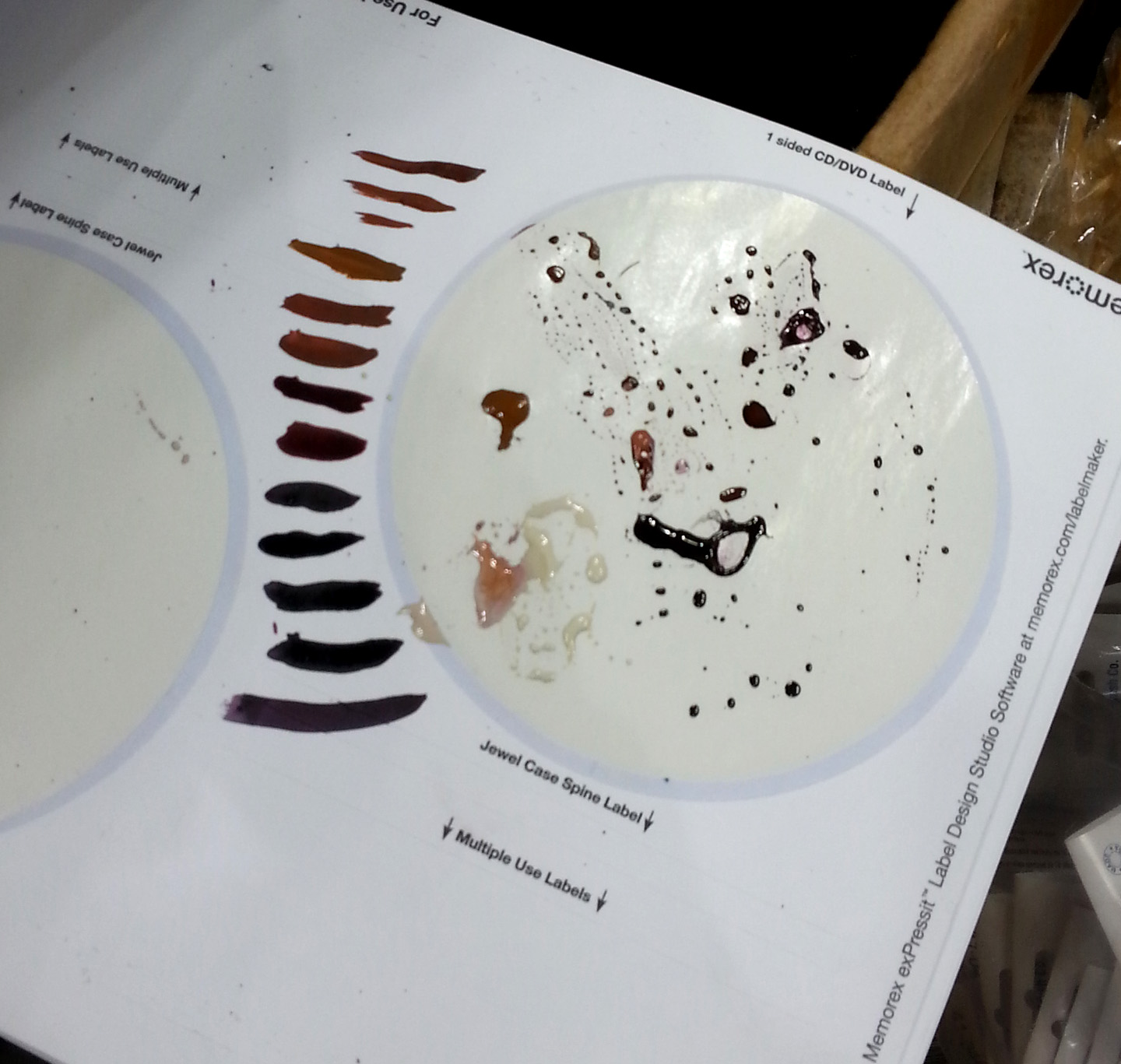 I didn't have any of my old masking sheets with me, so some coins had to do for the effects around the stars. 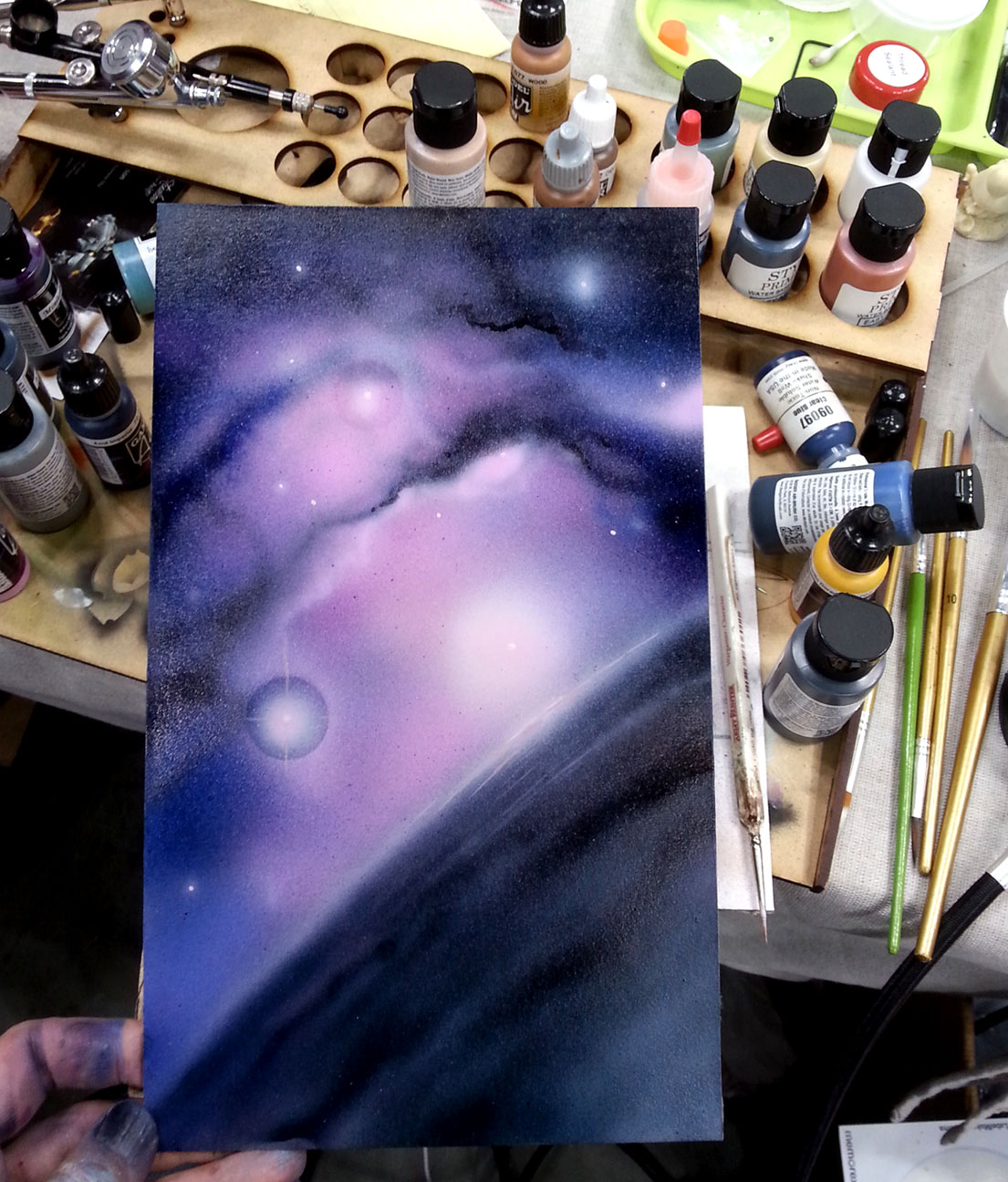 I used a brush to add a few horizon line highlights to the planet, and some 'sparkle' effects on the stars.  This is a subtle way to create the hard vs soft edge contrast, which creates depth in your paintings.

A hard edge next to a soft edge will make that surface recede to the background, making your painting have 'distance' despite the fact it is nothing more than a flat piece of board. 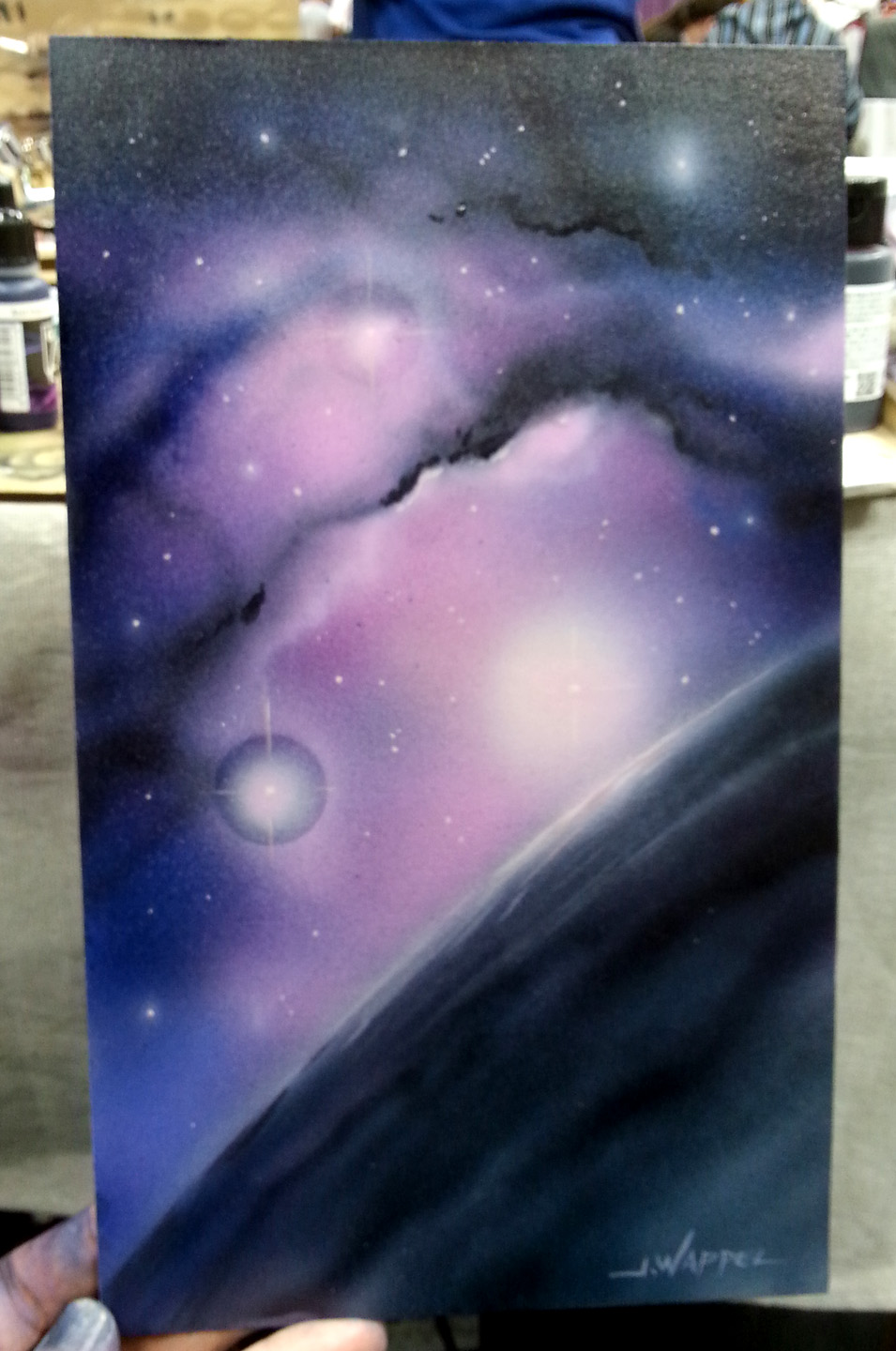 This is six o'clock on Friday.  Two more days to go, so stay tuned for more!!

I also painted for many hours in the Witchborn booth, where I saw all kinds of fun demos going on around me.  Here's a link to the site: 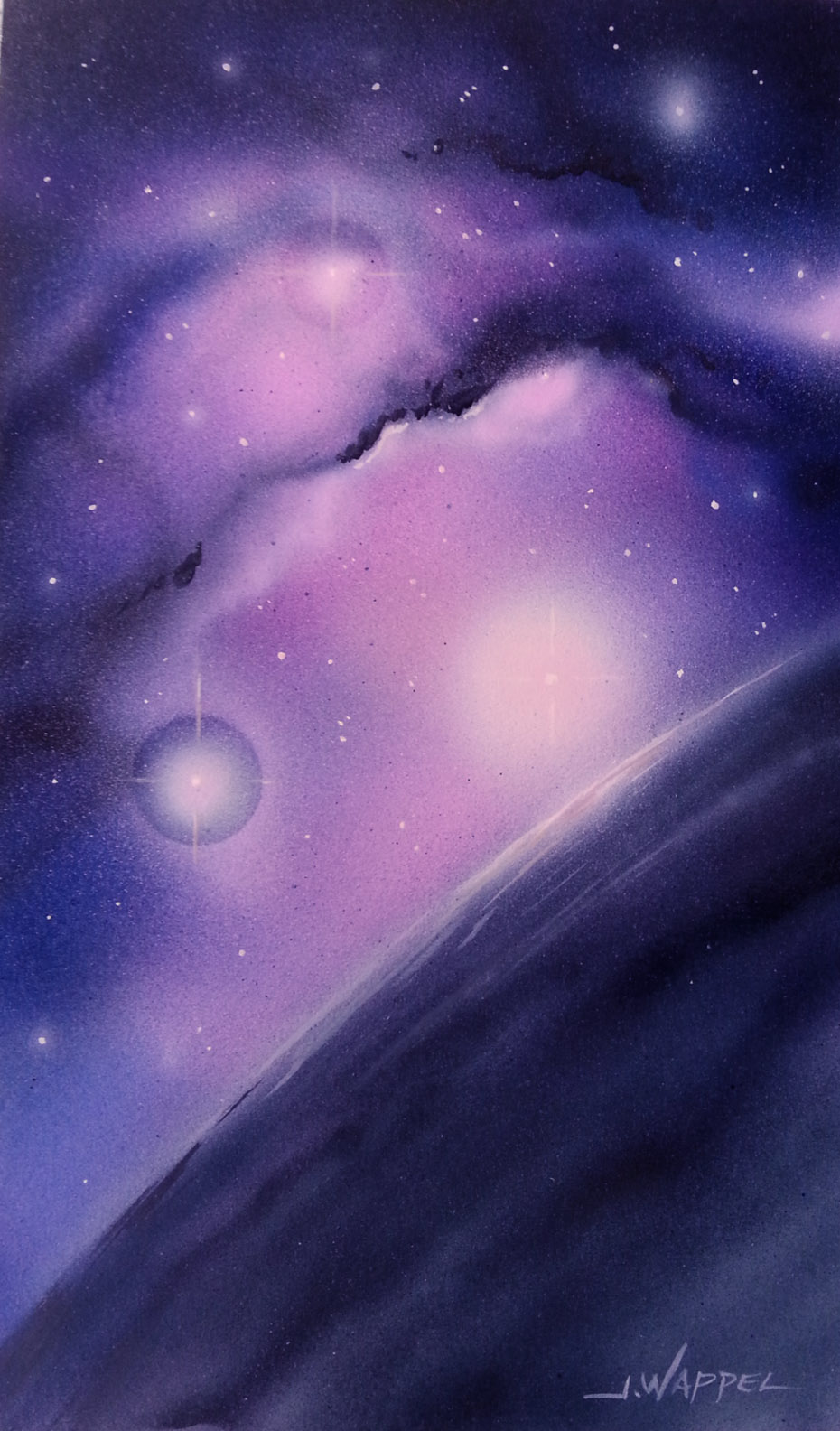