Converting a plastic saurus into the Great and Mighty Chakax

On this fine morning after the Super Bowl, I thought I would begin the day posting some images of my custom made Chakax.

Since I was not very sure if this character would be a viable (or wise) points investment, I did not want to shell out a lots of $$$$ only to find ot that he was better in theory than in practice.  I also had a ton of extra plastic saurus which I was probably never going to use.

I figured I would have some fun and try to make myself a Chakax.  Here is a WIP image that shows all the plastic bits, as well as the green stuff and Brown stuff used to sculpt the headdress and weapon.  The white sections are baked sculpey. 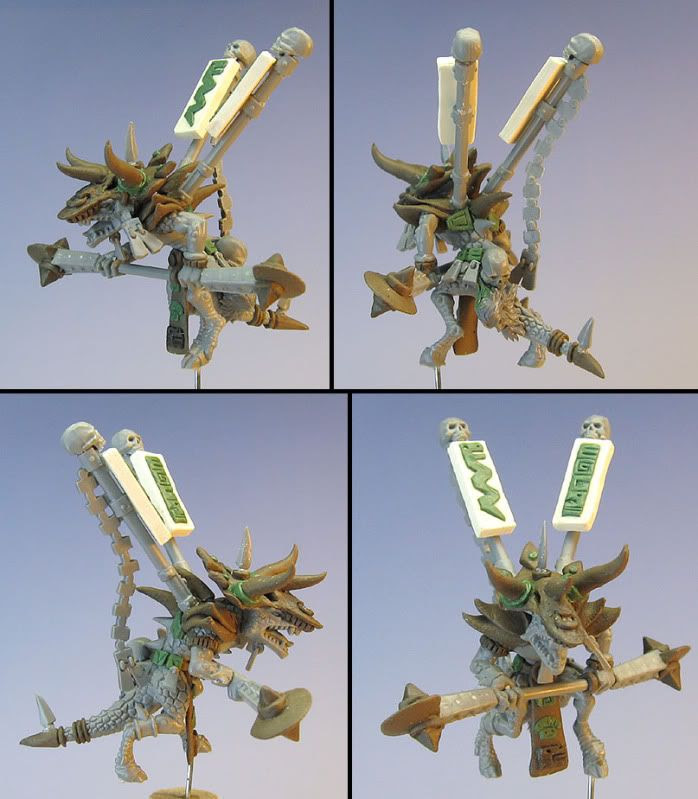 And now for a finished image:

I tried this guy out in few games against 7th edition demons and also Karl Franz with that 100 point "I destroy your whole army without even rolling a dice weapon."

It was very gratifying to see Chakax point to that particular item and say, " Hey, that's a pretty nice croquet mallet you got there, why don't you bring that over here so I can get a closer look at it... UUGH!!"  "Did that hurt?  It looked like it did.  You should have someone look at that."
Posted by wappellious at 10:36 AM 2 comments:

This was a very fun piece that I did a few years ago.  Someone donated a pair of old plastic dragon wings for the project, so I was off on my quest to make Loq-Qar the Terrible!

The wings were not very difficult to secure, but I did have to do a lot of sculpting around the joints to make it look cohesive and provide strength.  Liquid green stuff could have hastened the latter parts of  this process, however.

Anyway, I was itching to do a reflected lava effect, so I went wild on this guy.  At that time I was creating a saurus "immune to psyche" spawn (the old book, obviously), and they were going to be the exact same color scheme as this.

Here are some pictures: 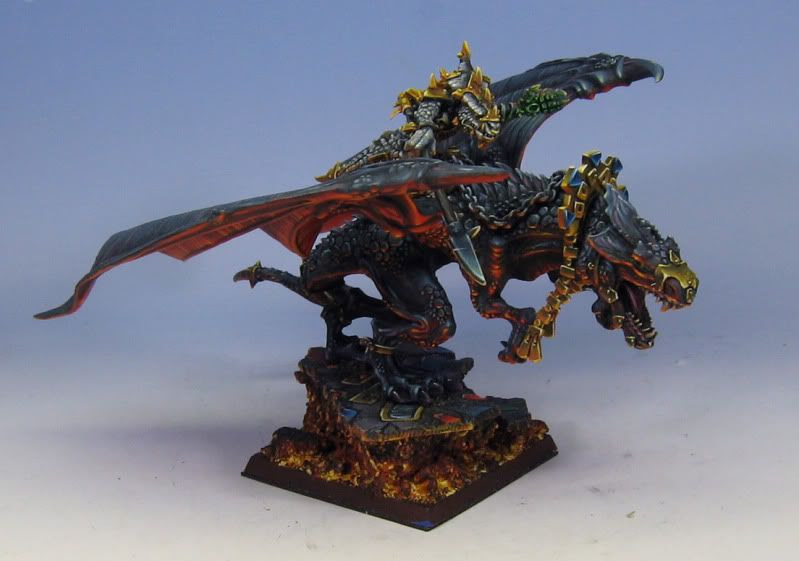 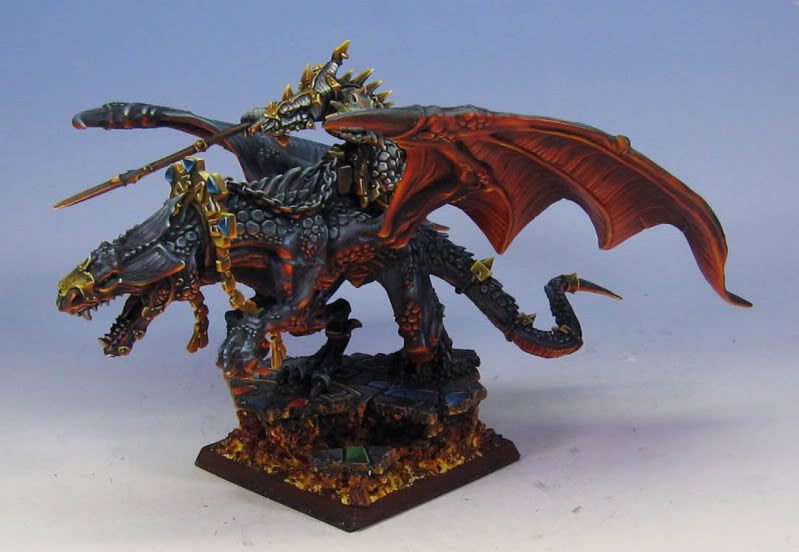 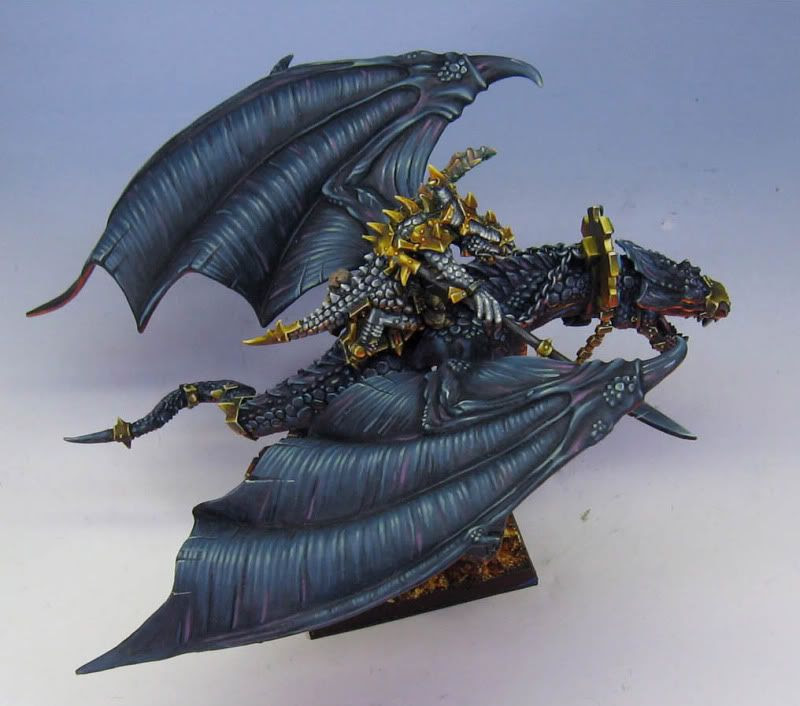 This shot gives the best view of the lighting... 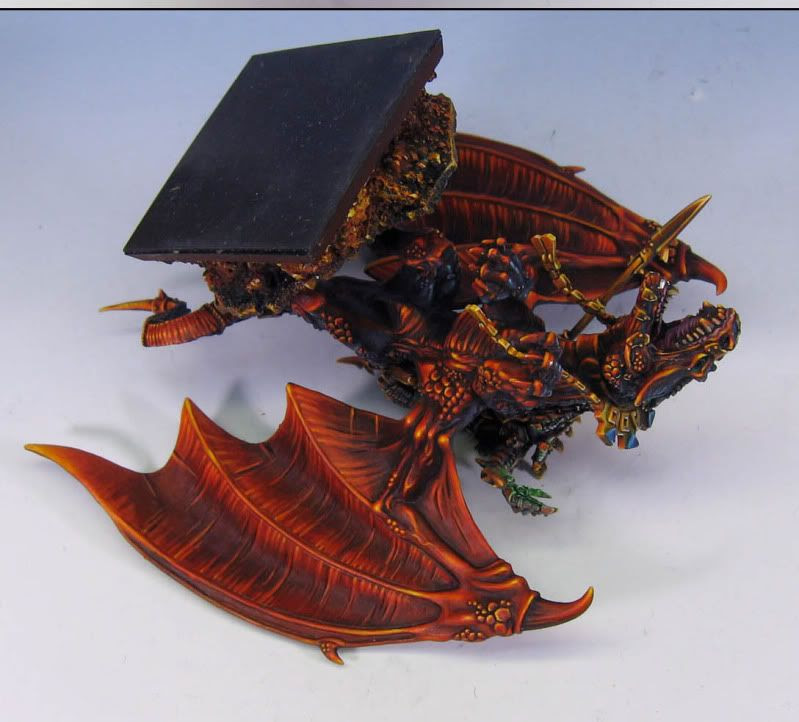 The headdress took a lot more time to create than the wings.  I cut out some pieces of plasticard and added glyphs to it, as well as some saurus banner decorations.
Posted by wappellious at 12:17 AM No comments: