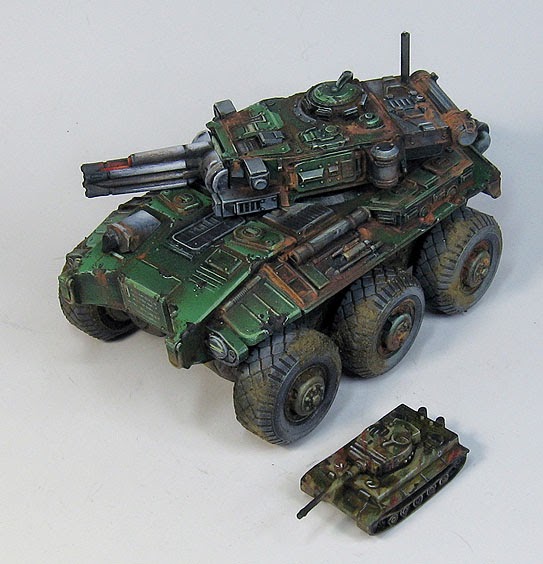 All right!  Some pictures of the Tigers.  I only spent a few hours on the whole batch tops, so obviously I would have like to get more time with them behind the magnifier light.

We were not even sure if we would be able to get primer on them, much less paint, so this whole thing was really a grand experiment!

You can get an idea of how tiny these things are compared to the RAV 6 x 6! 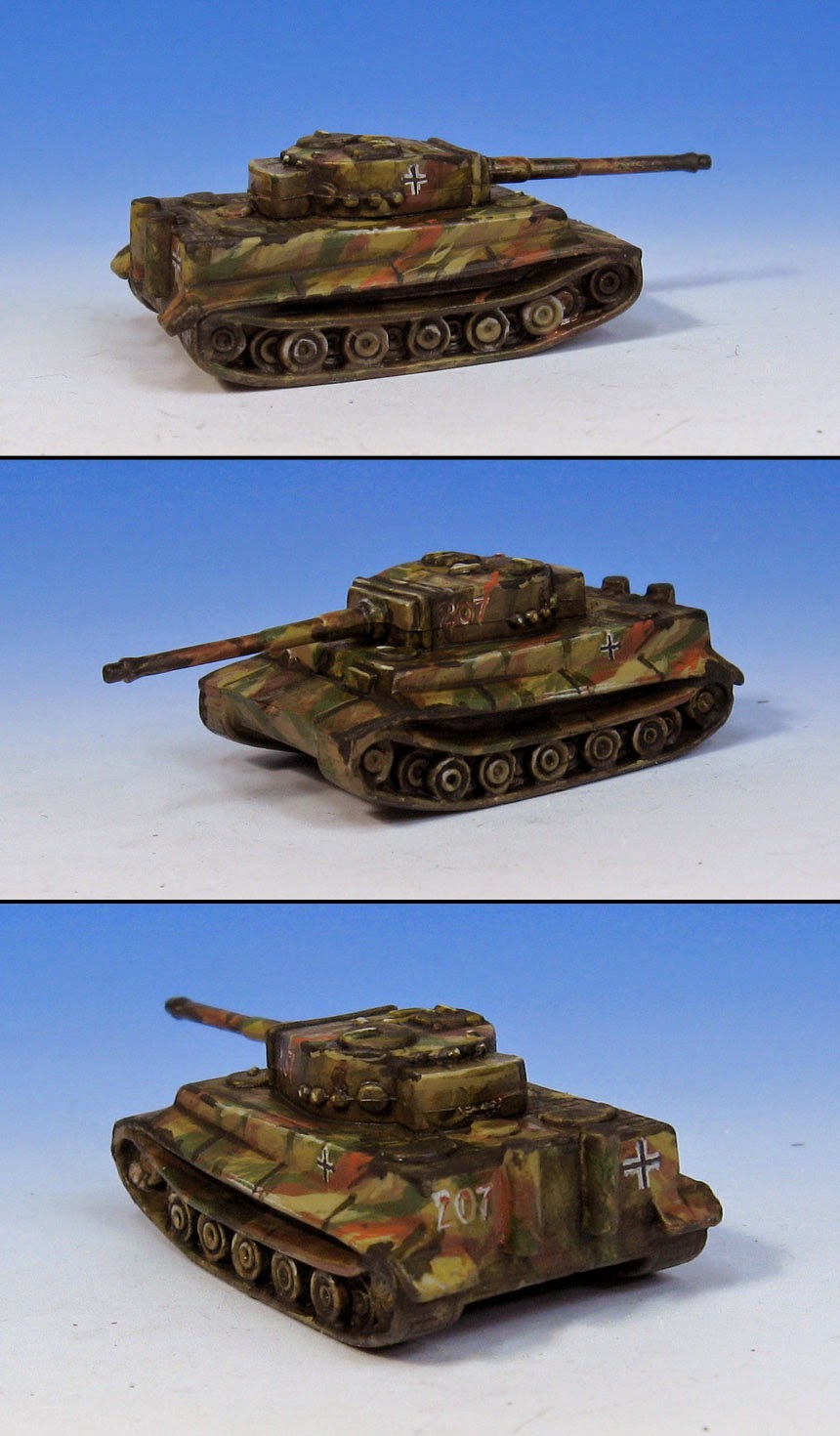 There was a surprising amount of detail on the miniatures, especially when you consider how tiny they were, and that they are meant for a board game. 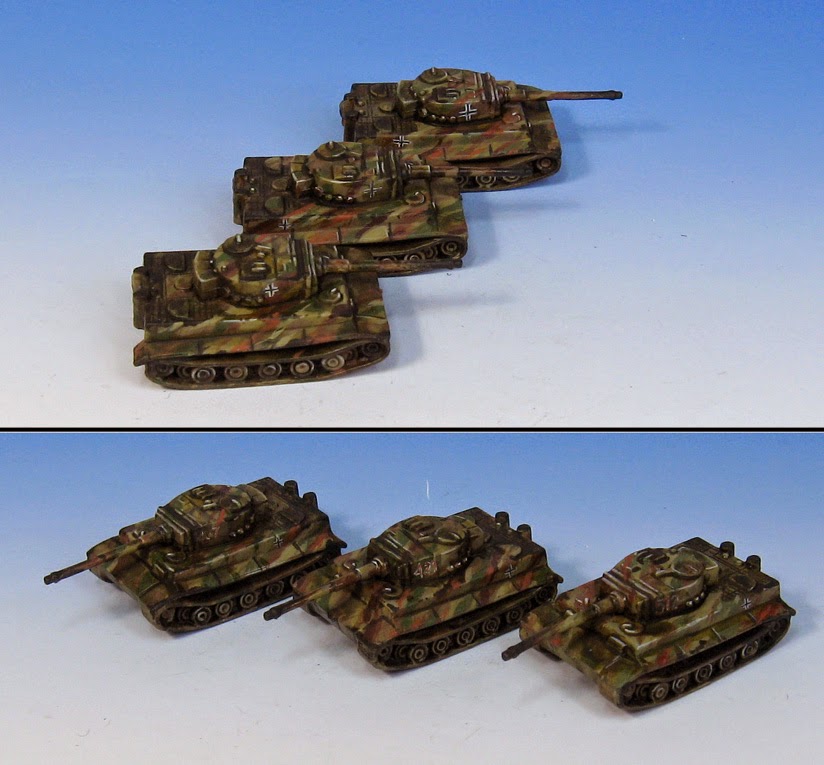 Once all these figures are painted, it will enhance the experience tremendously!  It was already quite nice with the simple unpainted versions.  Rick is going to paint some of the regular Panzer tanks in this late war scheme as well, so that we have variety.

There are also a few missions that call for special elite units, or something with a special designation, so having some other vehicles in a different scheme should be fun! 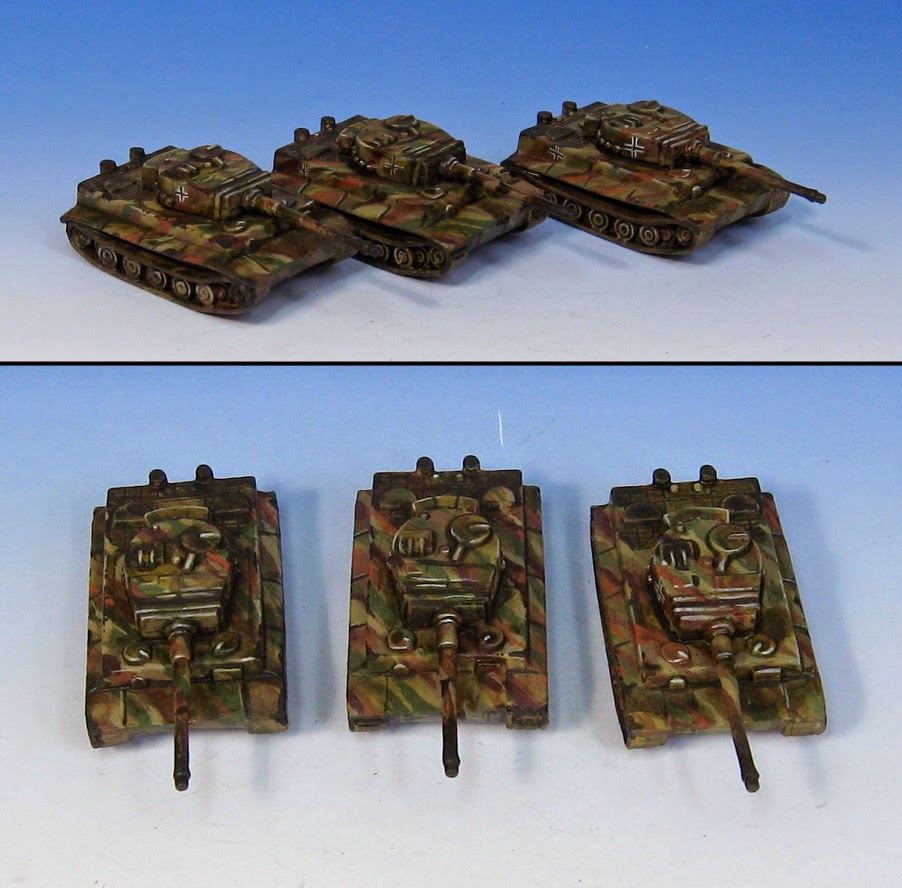 Also, I hope that we can get some of the expansion packs so that I could do some Eastern Front winter versions, or Battle of the Bulge, etc.

After painting 'full size' vehicle for so long, this was a very different ball game all together.

You do have to avoid the temptation to disregard these things for their details when you first start painting them.  The longer I worked on them, the more details I discovered!  I easily could have spent hours on each tank. 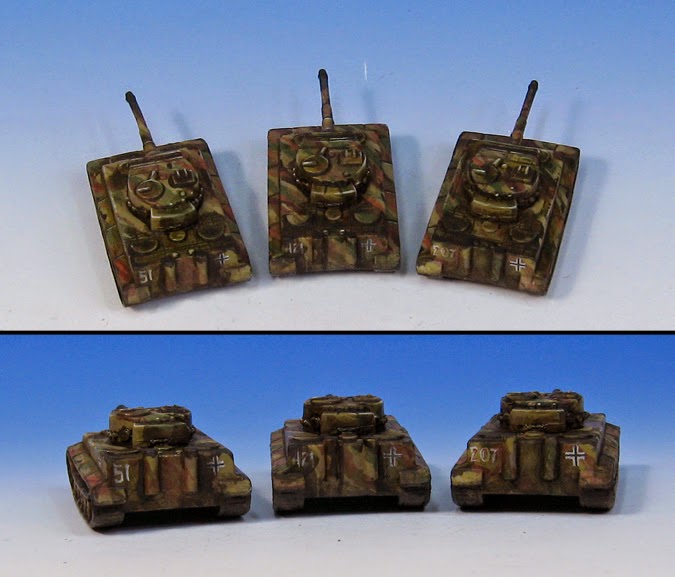 Uh oh!!! Looks like somebody just wandered into some serious trouble!

Is Oddball at it again? 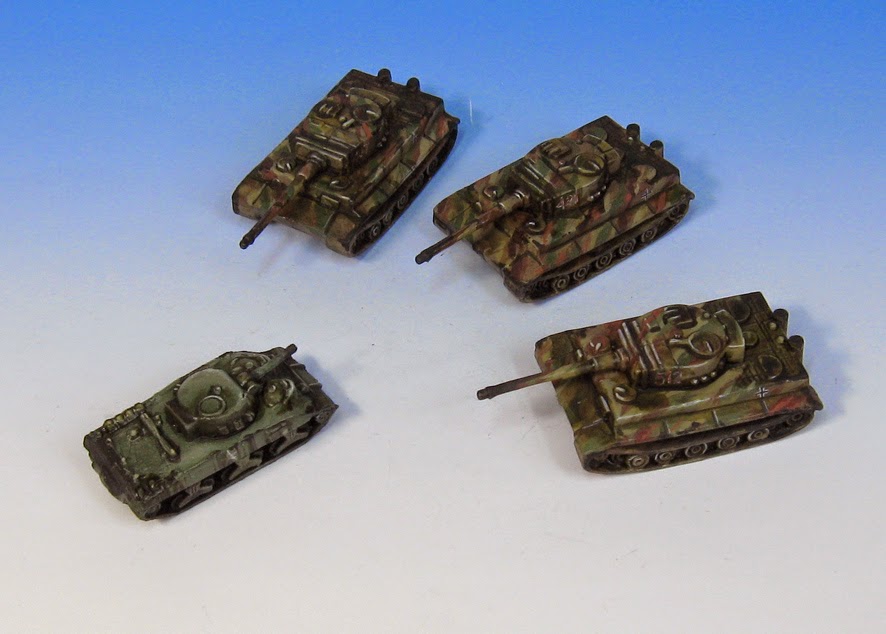 Posted by wappellious at 6:13 PM No comments: 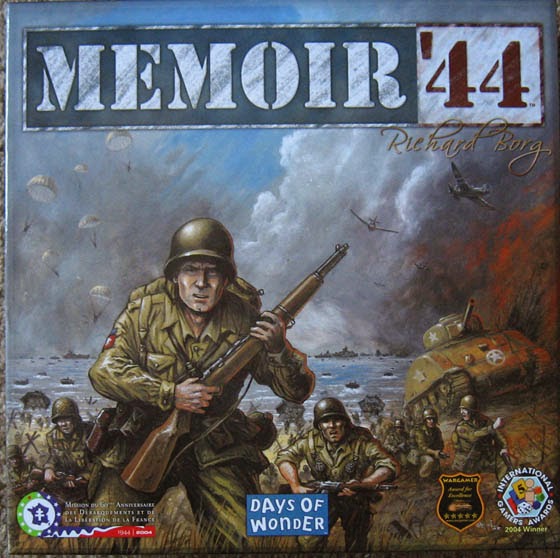 Now this is something completely different!  I have never painted anything from modern warfare (historicals), and certainly nothing at this small scale!

Memoir 44 is a game that Rich and I have played a few times.  It is a lot of fun, especially since it has all kinds of very cool miniatures.  We thought it would be fun to paint up the figures, starting with some tanks.

I started out by mixing some khaki paint in with the Badger gray primer in preparation of painting some late war Tiger tanks. 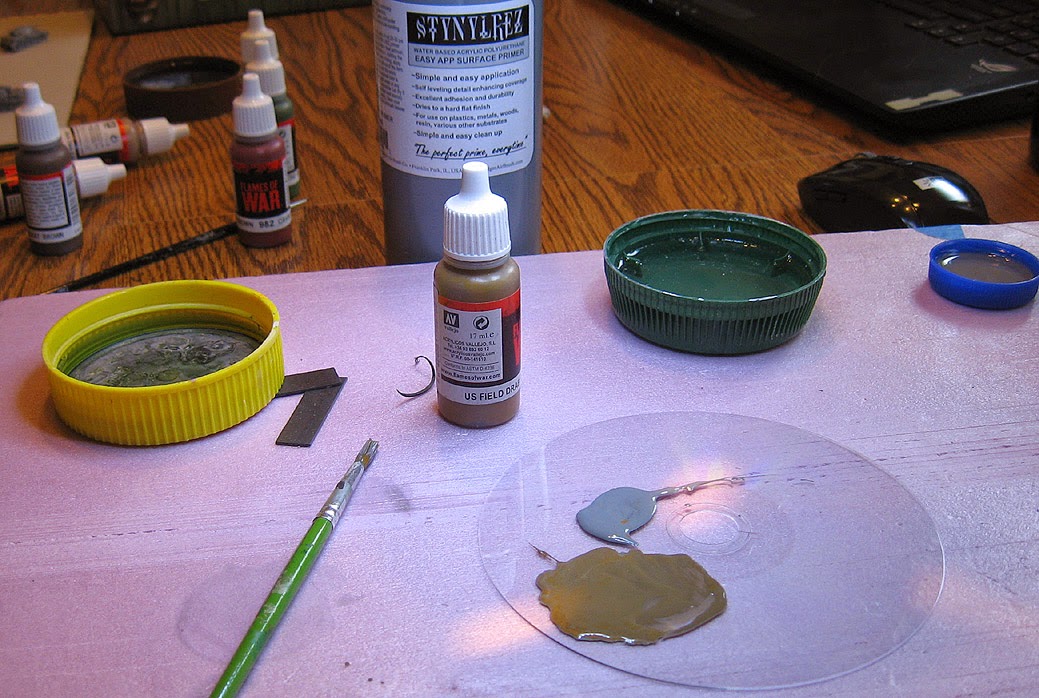 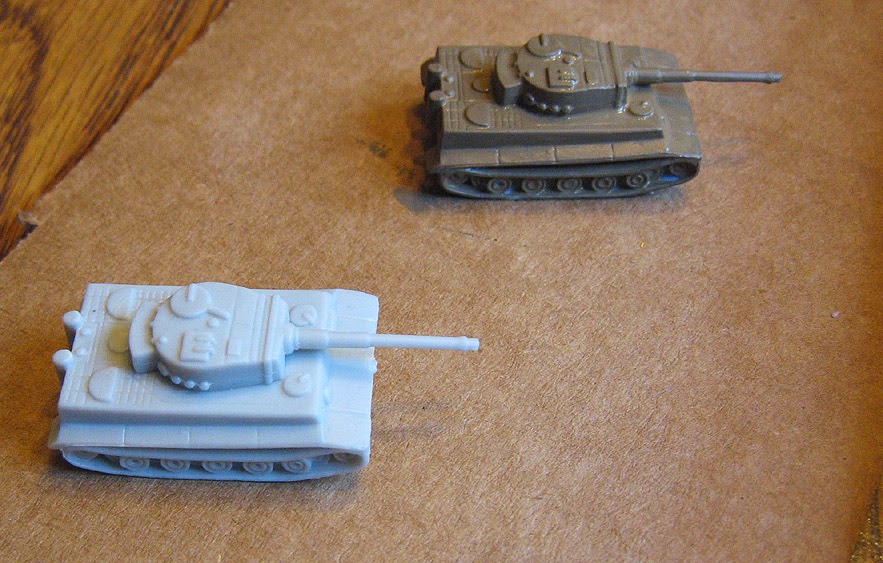 You can see the primer mix, as well as the khaki and tan that I wanted to incorporate onto the vehicle!  My 'palette' gives you a bit of an idea of how small these tanks are.  I think they are less than half the size of a Flames of War Tiger. 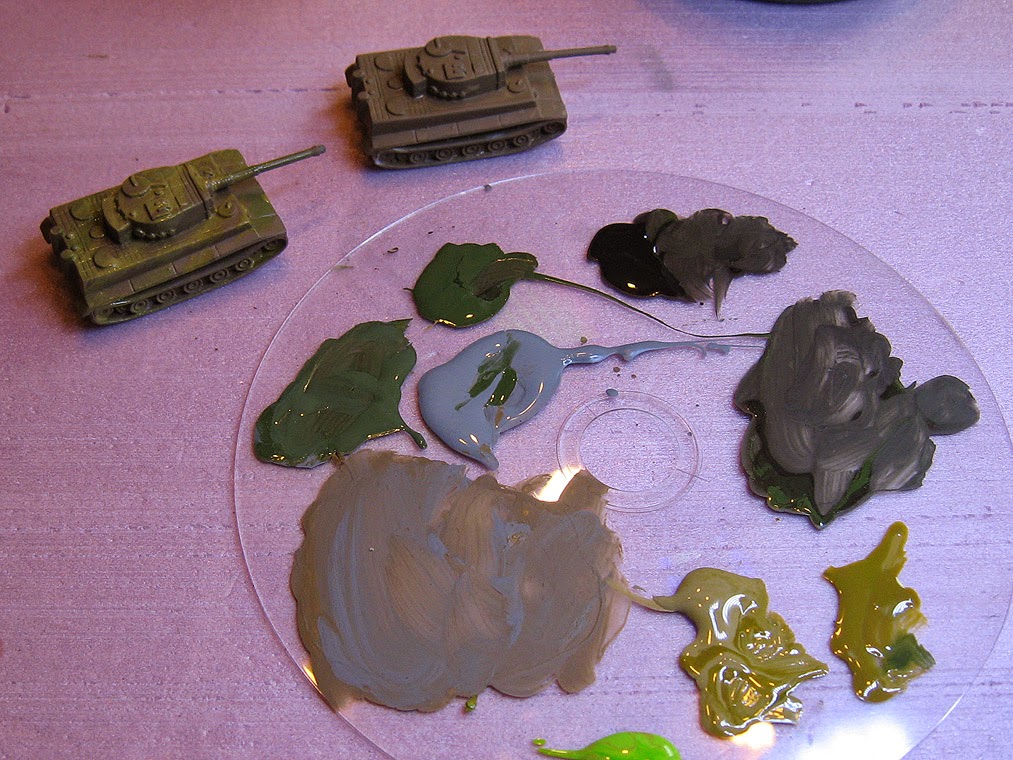 I mixed a cavalry red with the olive drab to create the rust colored stripes. 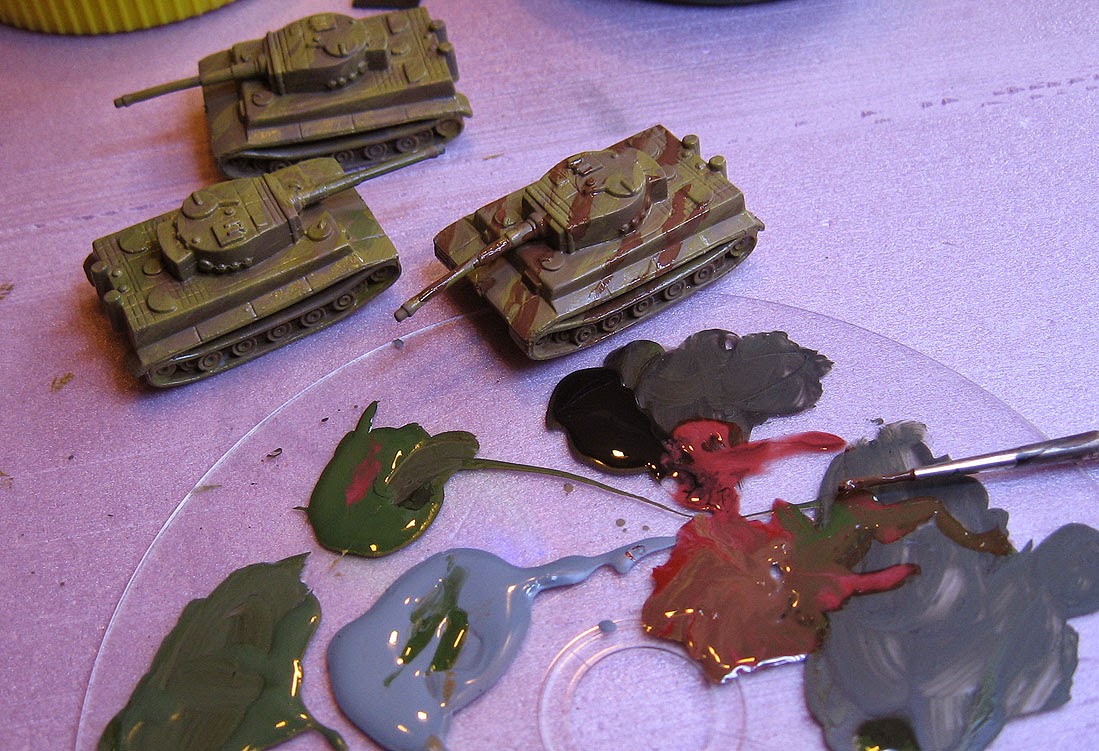 Working my way through the tanks. I used a beat up liner brush for this part, since it would give me a nice random application across each of the surfaces.

I did the same for the green color. 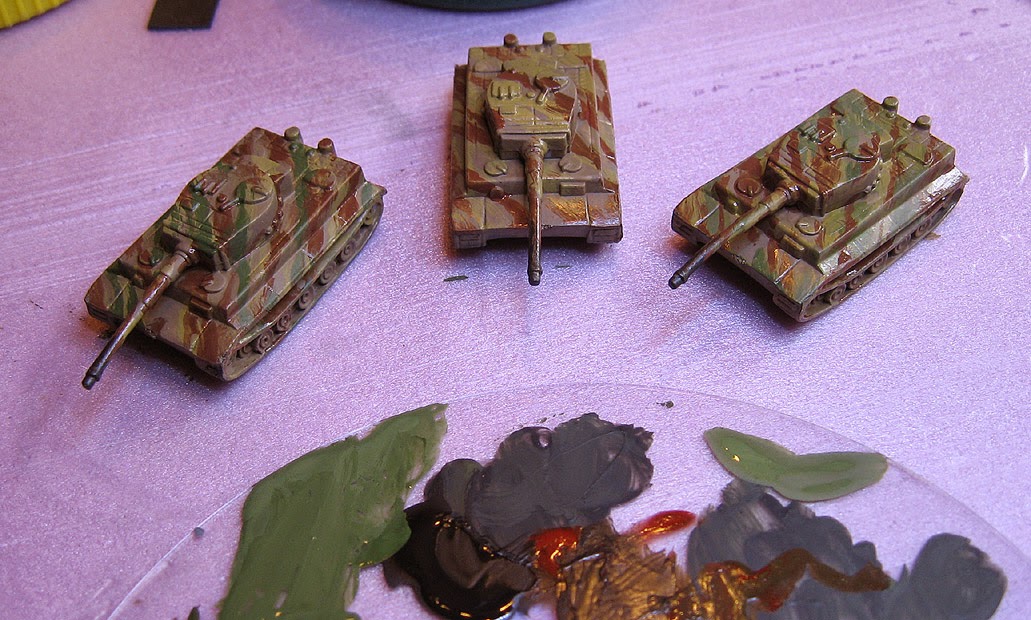 Now it's time to add some darks.  The Secret Weapon Baby Poop is more of a yellow, while the Sewer water has a greenish tint.  The Brown liner paint is for the deepest darks, and for adding in with the other washes. 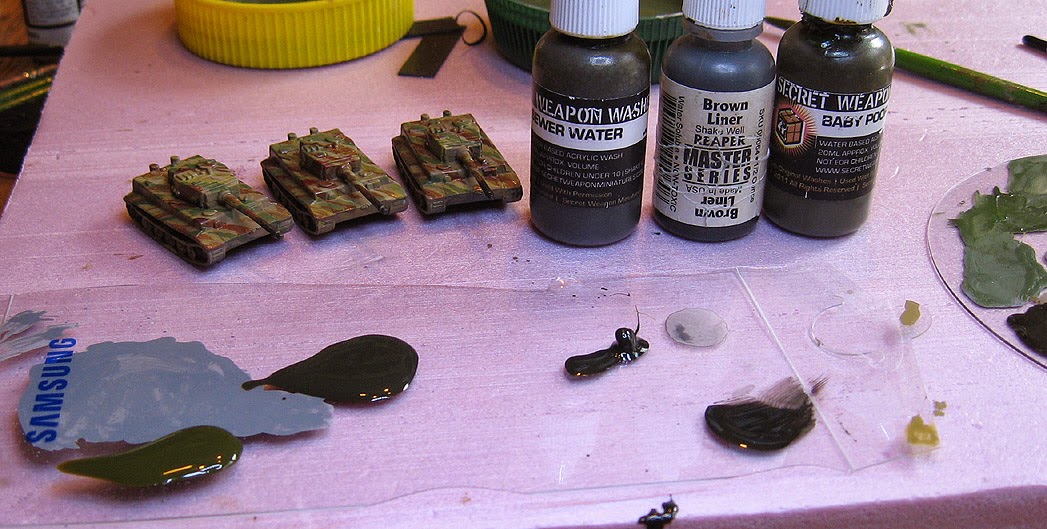 It makes a difference right away. As always, these glazes were applied very carefully, not slopped on.  I was mixing in each color on various sections of the tank, so that some parts were 'warmer', and others were 'cooler'. 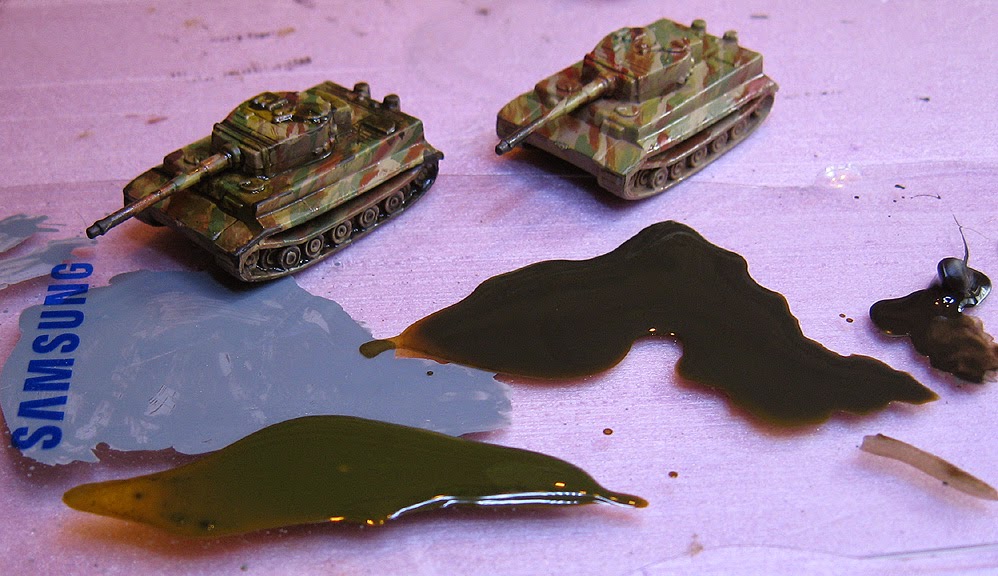 Getting there.  Again, the Brown liner is thicker than the two washes, which creates a very different property.  It also gives it more of a smokey feel, which is great for deep wheel wells, and even scorched areas such as the muzzle tips. 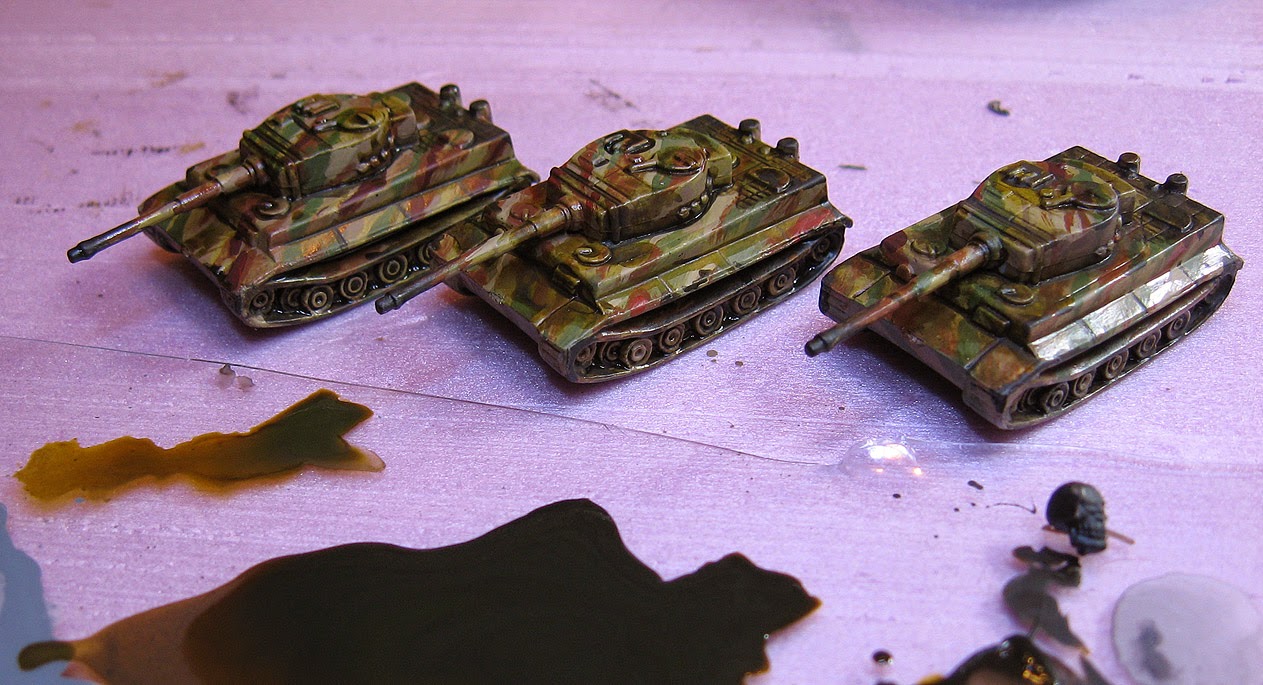 With the majority of the shading done, it was time to do some freehand!!

I started with the white, so that the darker red and black colors would go over the top.

Here's a few images of the freehand under way.  Keep in mind, these buggers are tiny!  Definitely needed my magnifier light :-) 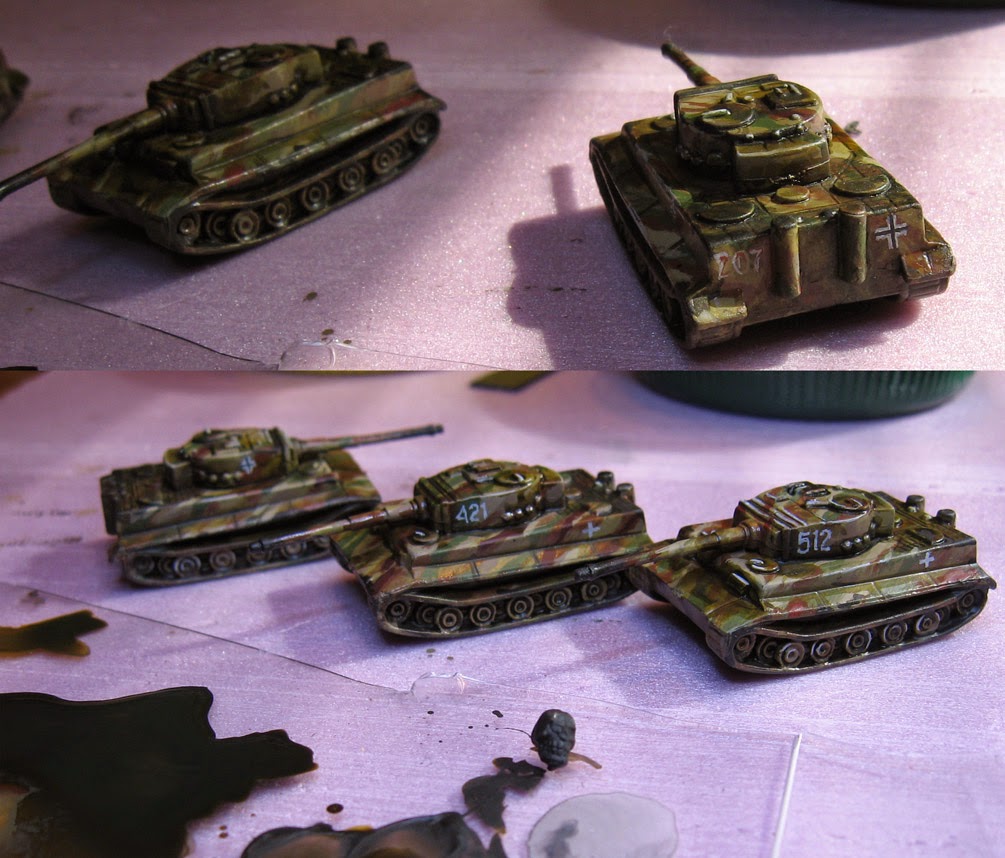 Posted by wappellious at 8:22 AM 4 comments: