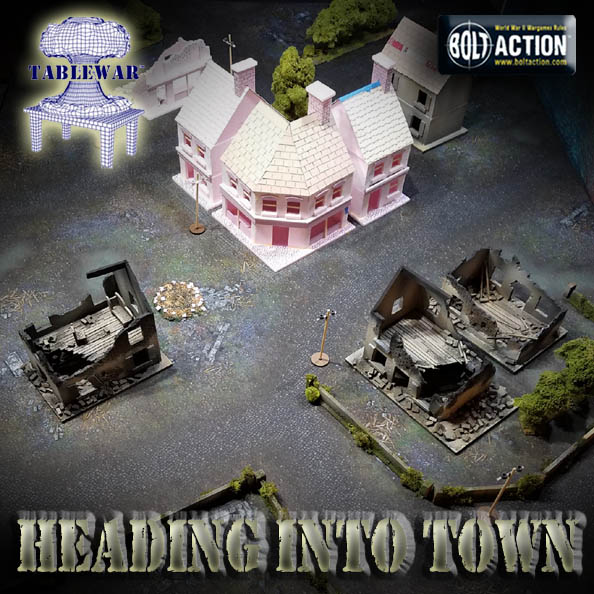 As we expand our early war Bolt Action locales, it is time to move from the countryside to a somewhat more urban environment, ultimately leading up to full fledged city style boards.

In this series, I will try to show how to build your terrain to take advantage of all the fantastic graphics that can be found on battle mats like this great cobblestone mat from TableWar.

I want to show how to make your terrain mesh as well as possible with the mat, but also be flexible.  It would get very boring if you simply set up the exact same table game after game! 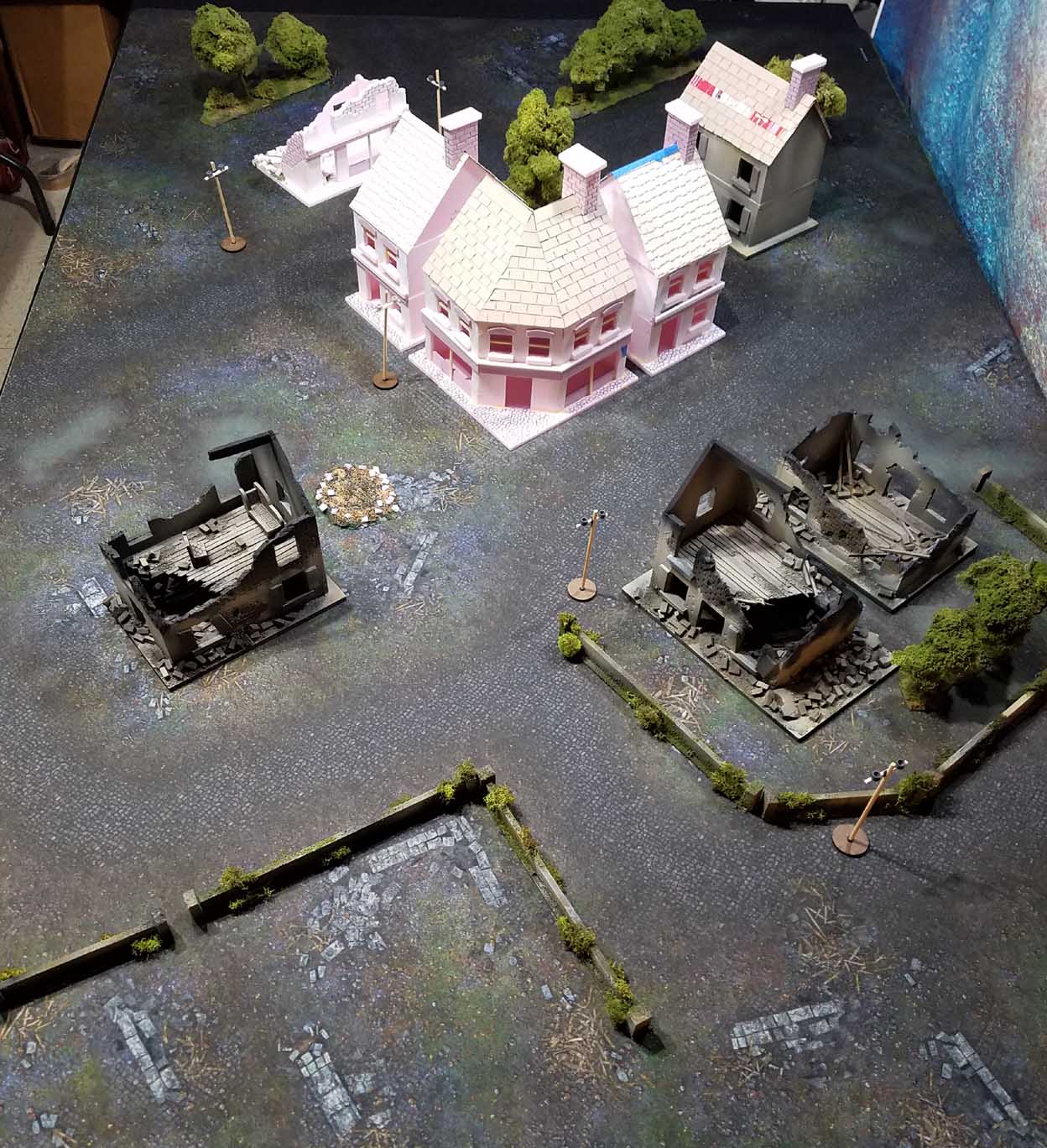 Here is the mat that I am working with.  You can find that here: 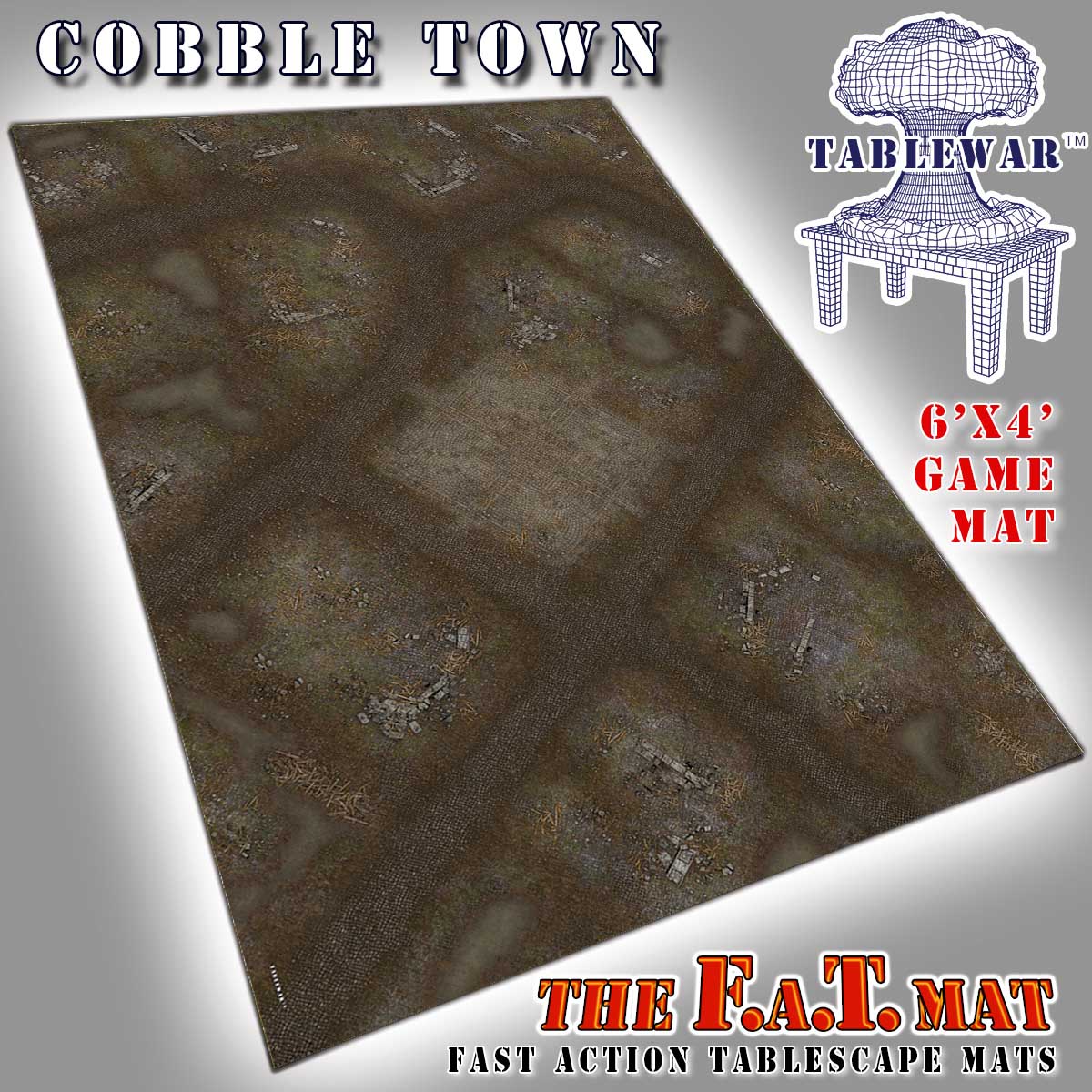 Since roads are very important in games of Bolt Action, I wanted to create lanes for vehicles to move and deploy rapidly.  At the same time, I wanted to create "blind alleys" and other hidden zones that will make urban combat as hazardous as it normally is.

This town will have a variety of intact and ruined buildings so that I can rotate them in an out, and create very different environments using this single mat.  I have a modular church under way to go along with these structures.

You have already seen the series on how the ruined buildings were created and painted, that was a series that began here: 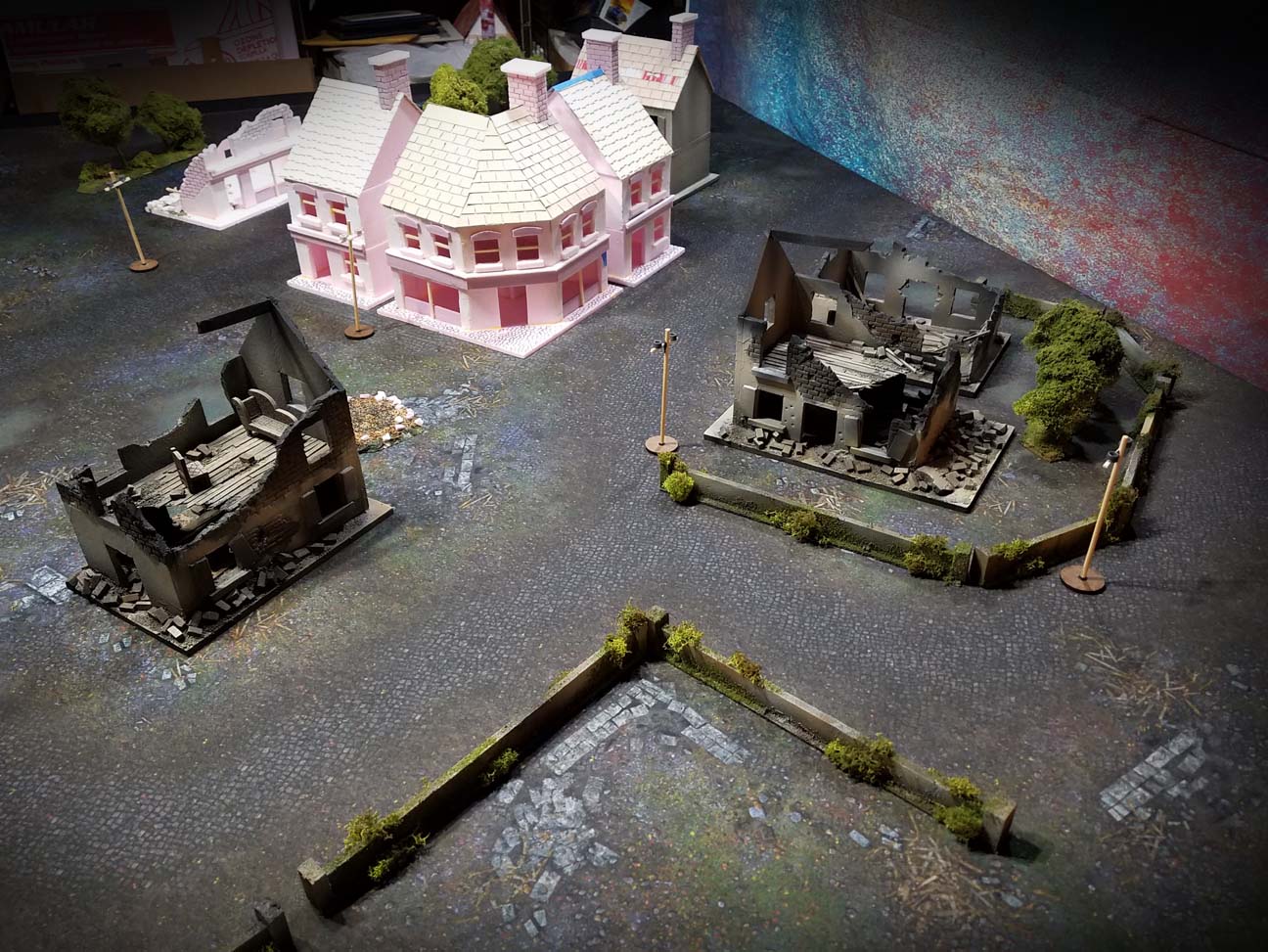 I will be making some "blocking terrain" as well, such as that crater.  How else would all those buildings be in such need of repair without having a few craters!  You can see that it also matches some graphics on the mat.  The ruined buildings will be concentrated in areas where the mat has images of wood piles and smashed stones. 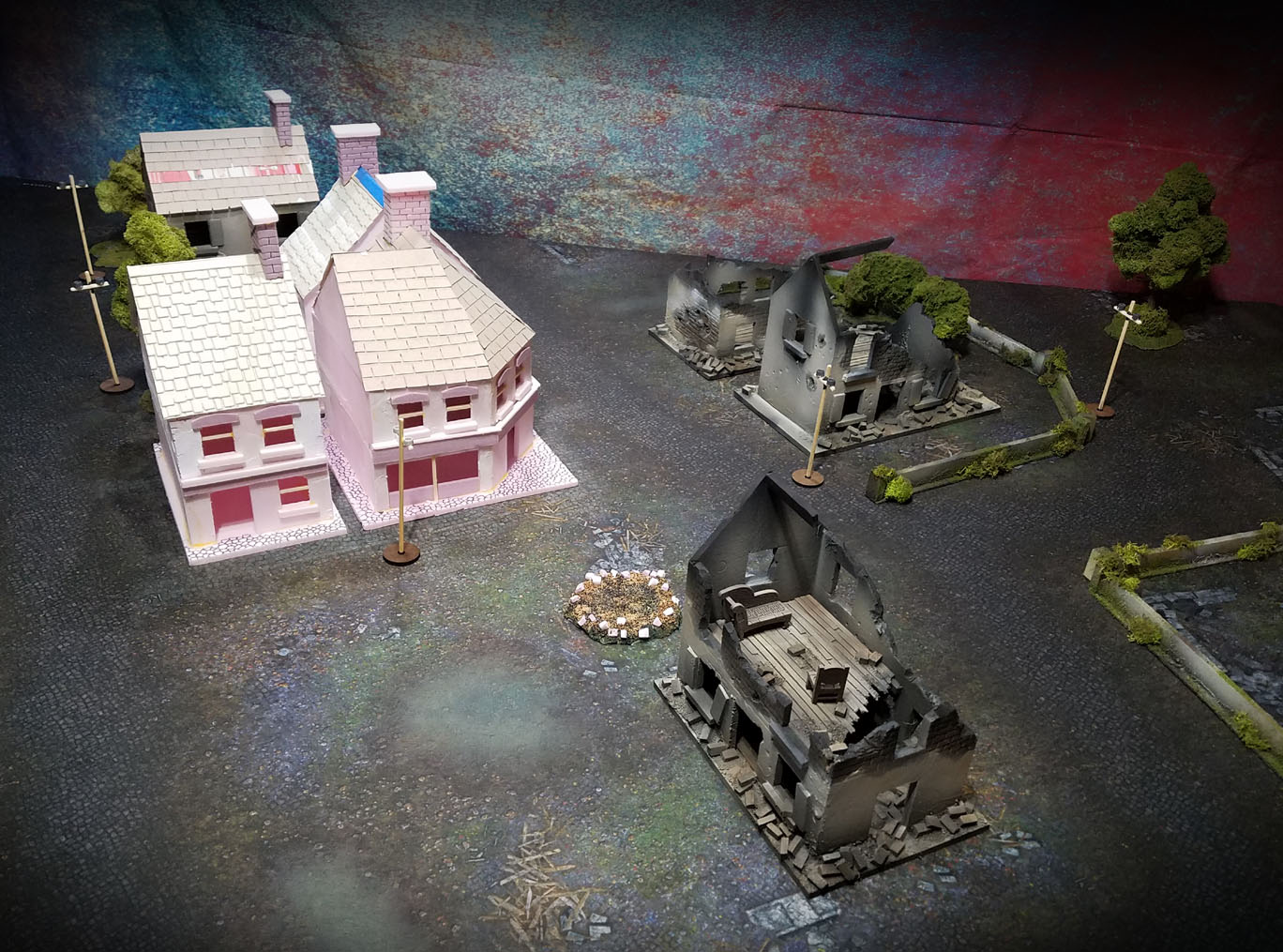 There will also be plenty of places to hide, take cover and set ambushes.  The mat will be moved around in various directions to best take advantage of the modular buildings, as well as the walls and tree stands. 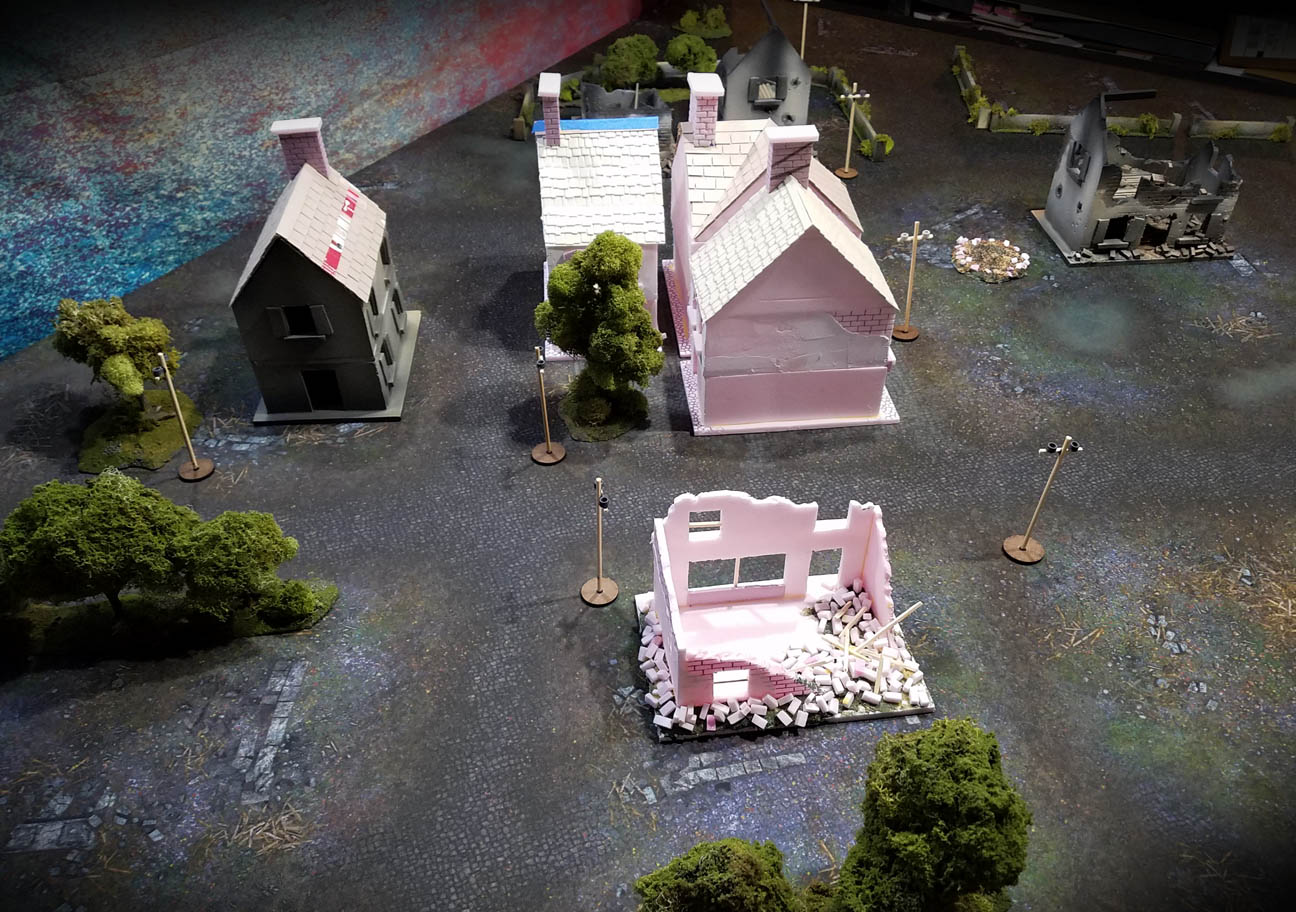 You can see these relatively wide thoroughfares... but my intent is to make some piles of bricks and other rubble which will impede movement through them.  Some of these might even be altered by extra sandbags, etc, to make a stronger fire position.

Those will be done as individual step by step articles, just like a post on how I made the telephone poles. 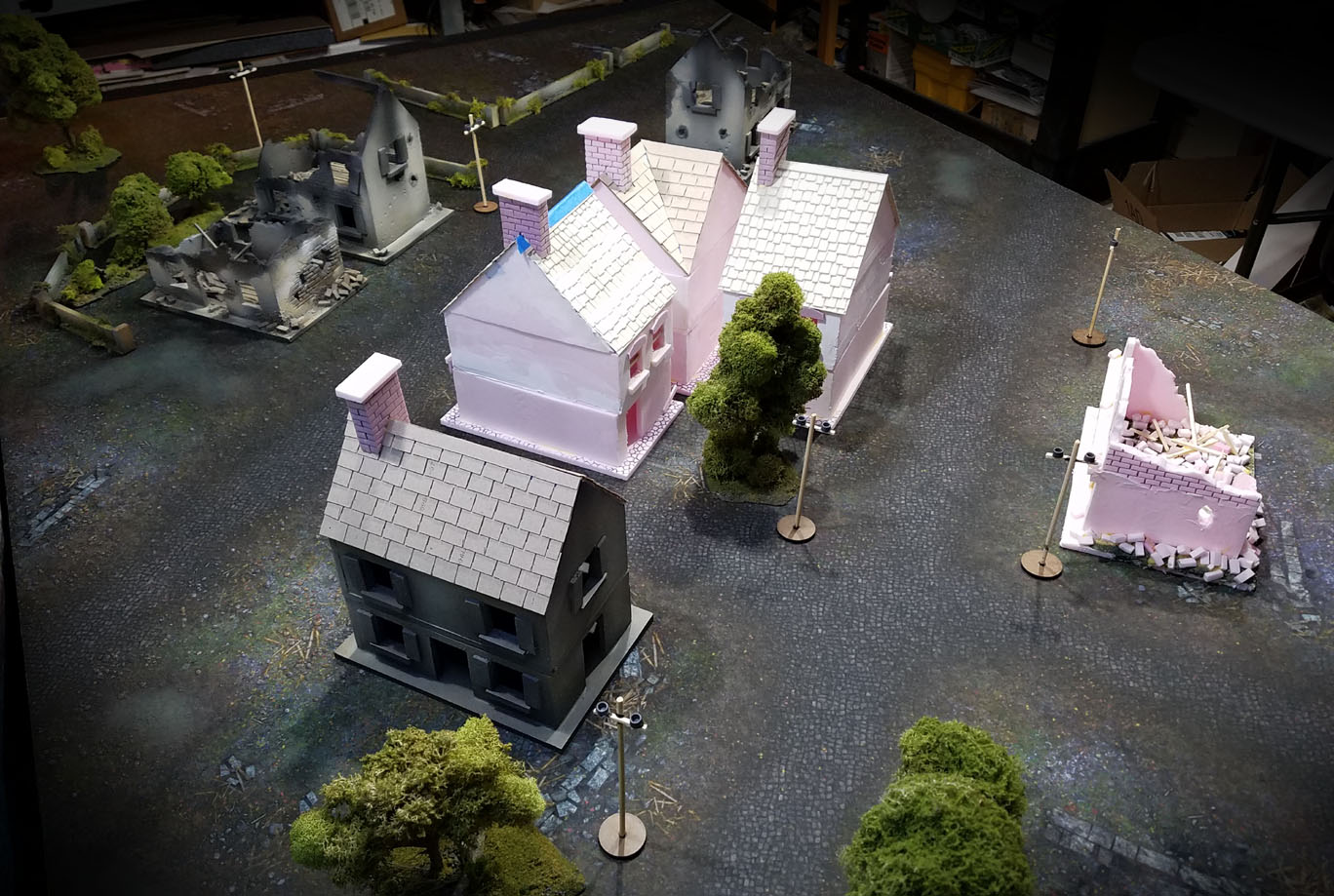 Matching the texture of the mat is very important, and I tried to do that on the 'bases' of my buildings.  In essence, this is a sidewalk.  I used a pen to carve in the texture of cobblestones, taking care to match the sizes and shapes of those on the mat itself. 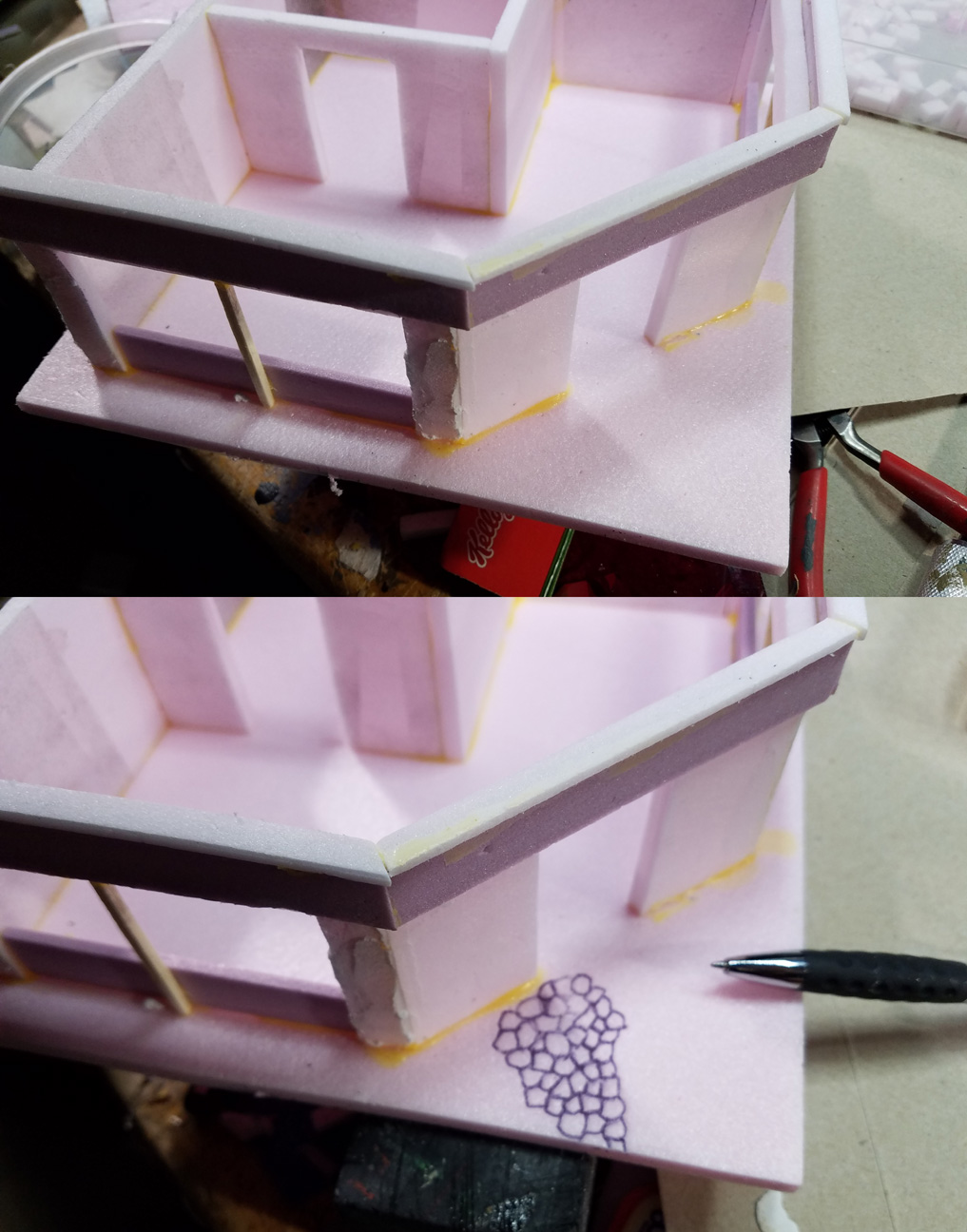 It didn't tale very long to get this texture on the entire sidewalk, and I was very pleased when I set it down on the mat!! 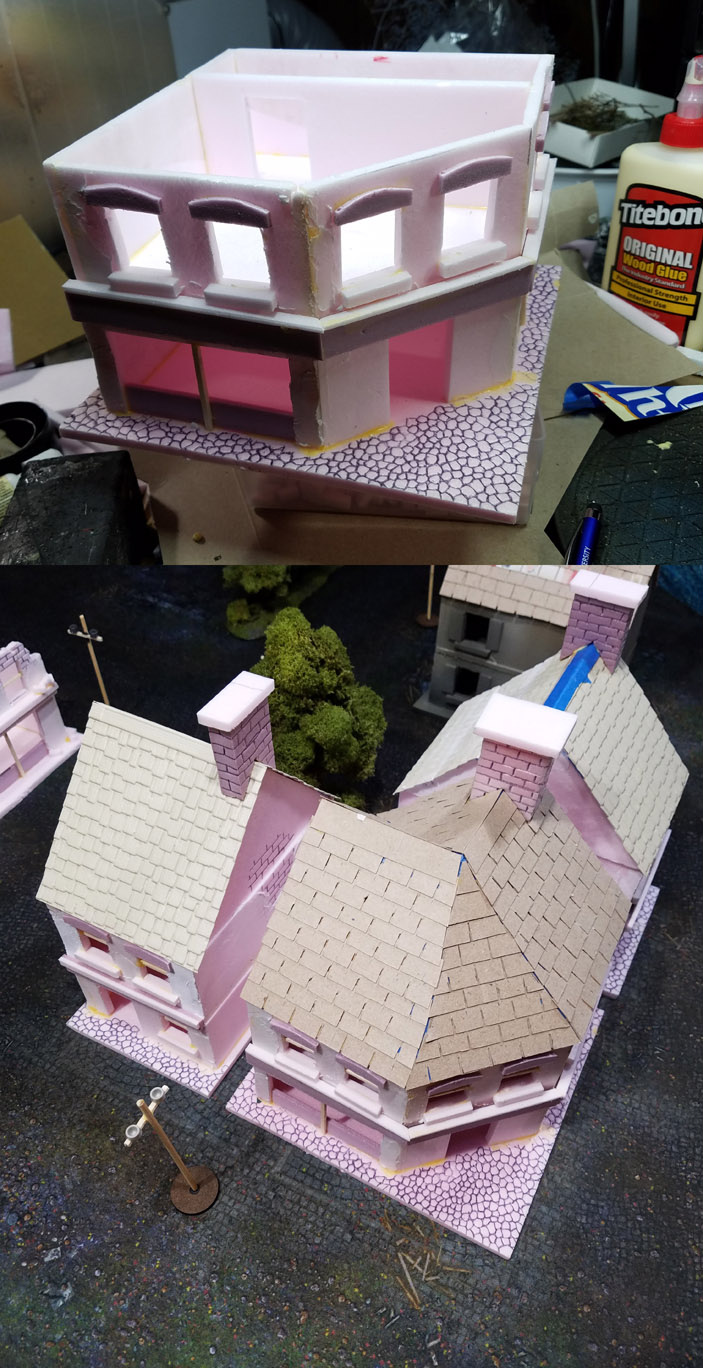 When I got down to street level, I realized that all the little odds and ends that I will be using are going to add a lot to this scene.  I have furniture, street lamps, road signs, mailboxes and more! 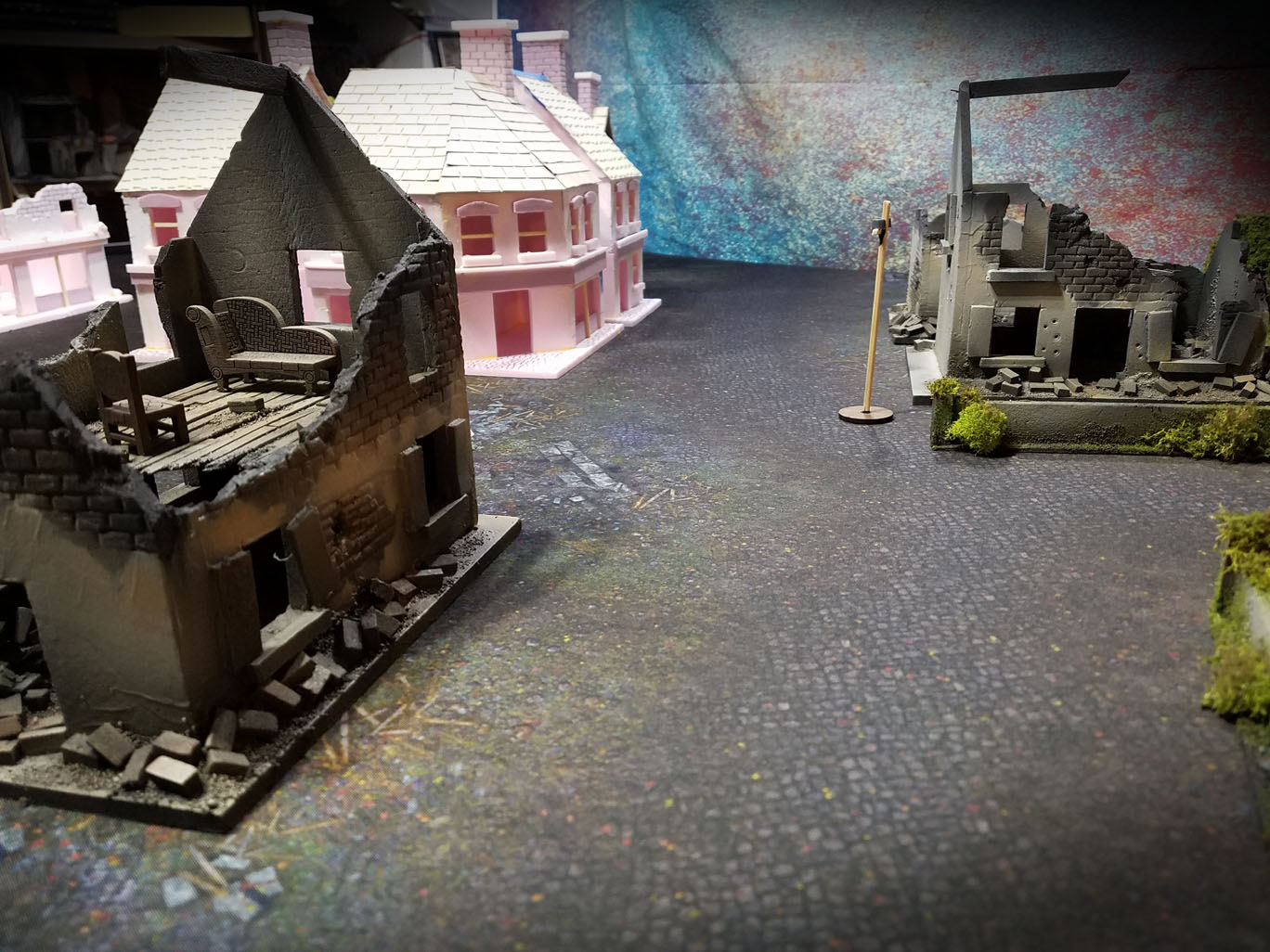 The piles of rubble will also make a very tough environment for vehicles to move around unhindered.  I also have some fountains and other decorative elements which should make these open areas more interesting. 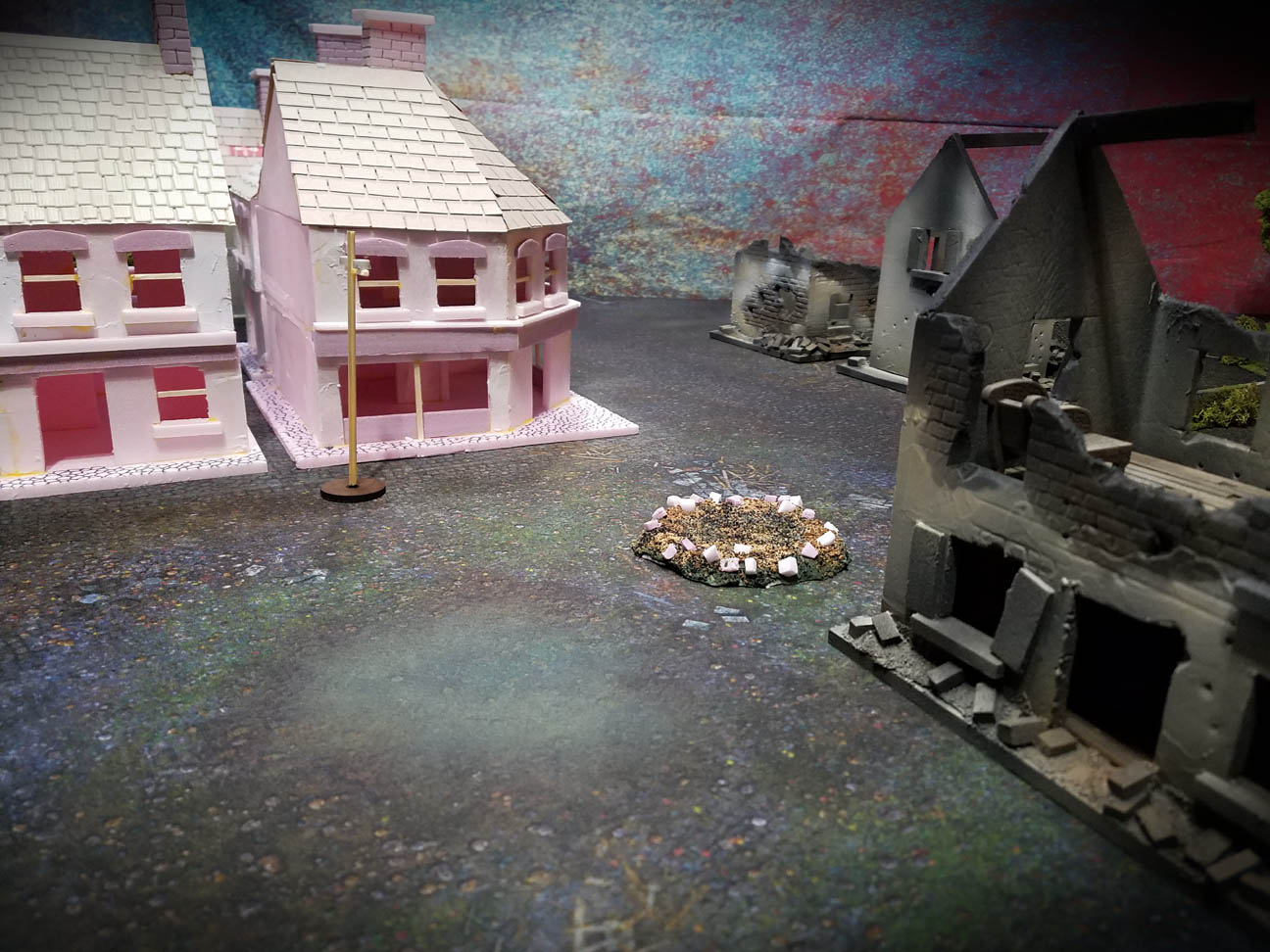 Stay tuned for much more on this terrain board, the buildings, scatter terrain, and eventually some battle reports!!