Slogging through the mud 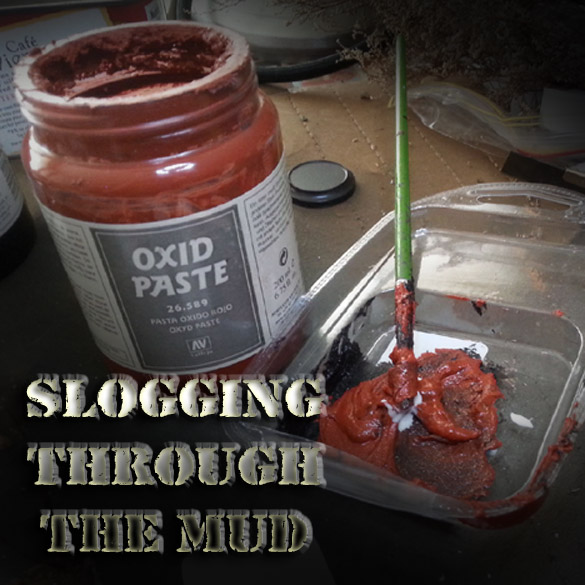 Prior to my next battle of Flames of War, I realized that I was going to need two things.  Heavy duty (and mobile) anti-air support, and mobility for my infantry!

I thought that a solution presented itself in the form of the Lorraine Carrier.  It is an armored transport, which also has two crew fired AA machine guns!  These can also be used against ground targets.

Since they are two part vehicles, they needed to go on a stand.  As an added bonus, they would look much neater on a road, and I could magnetize the bottom more easily! 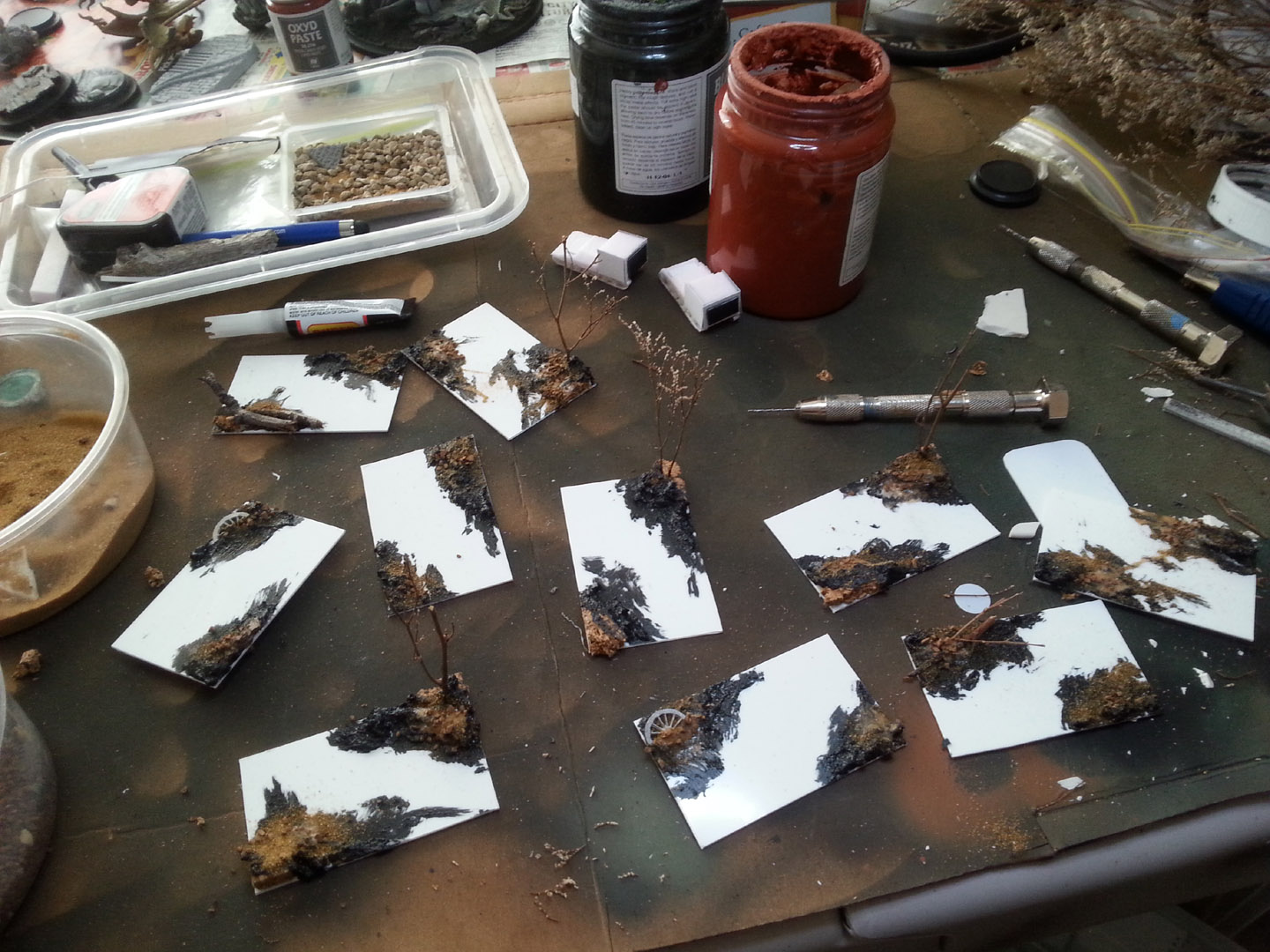 For this task, I combined the black lava paste and the usual red oxide.  The black lava provides more structural support for the off road sections, leaving the softer, smoother red oxide paste to create the ruts in the dirt roads. 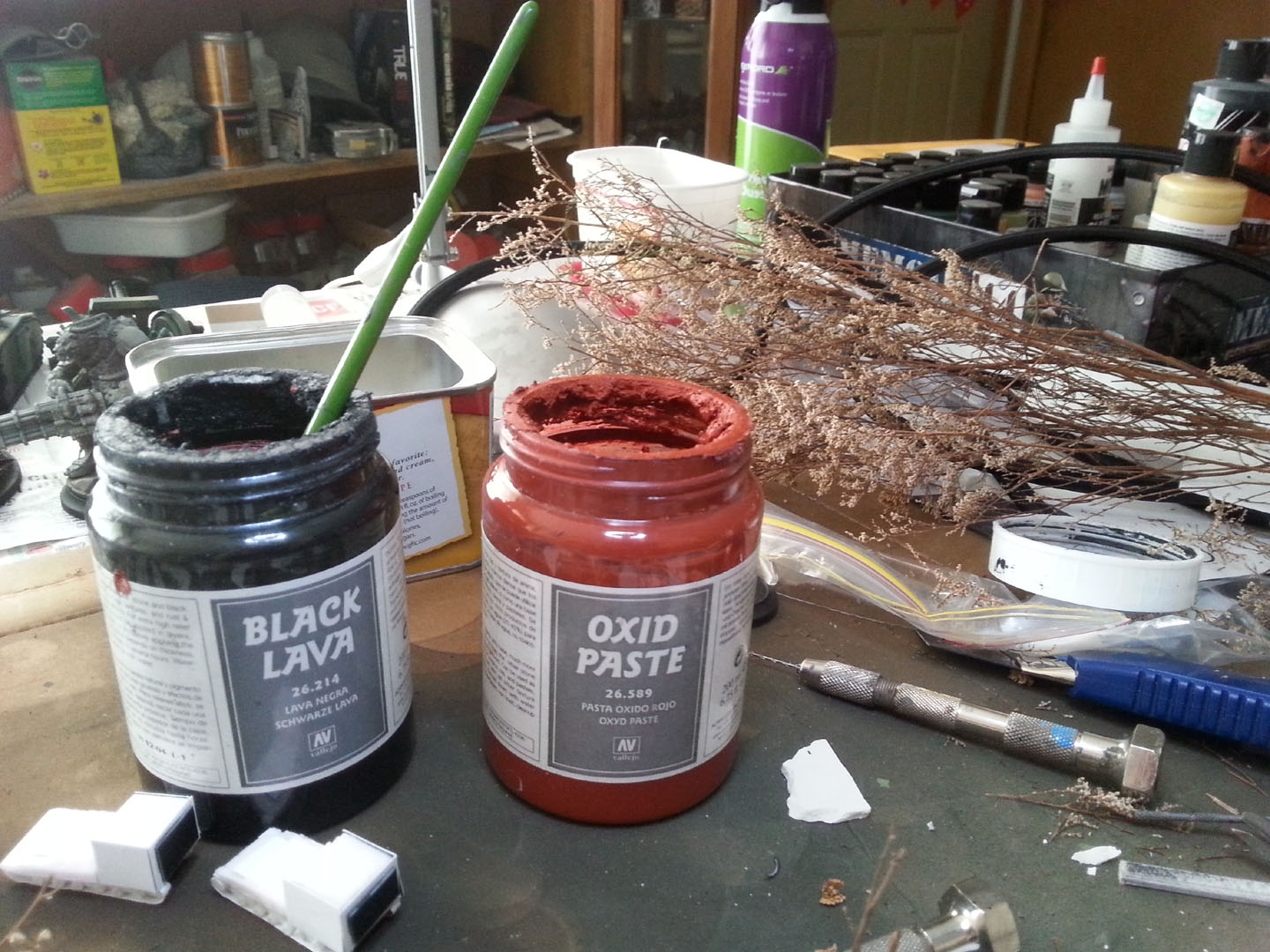 I also like to mix in some Elmer's glue for a few reasons.  It thins out the paste just a touch, making it easier to apply, and the rocks and gravel tend to stick much more firmly. 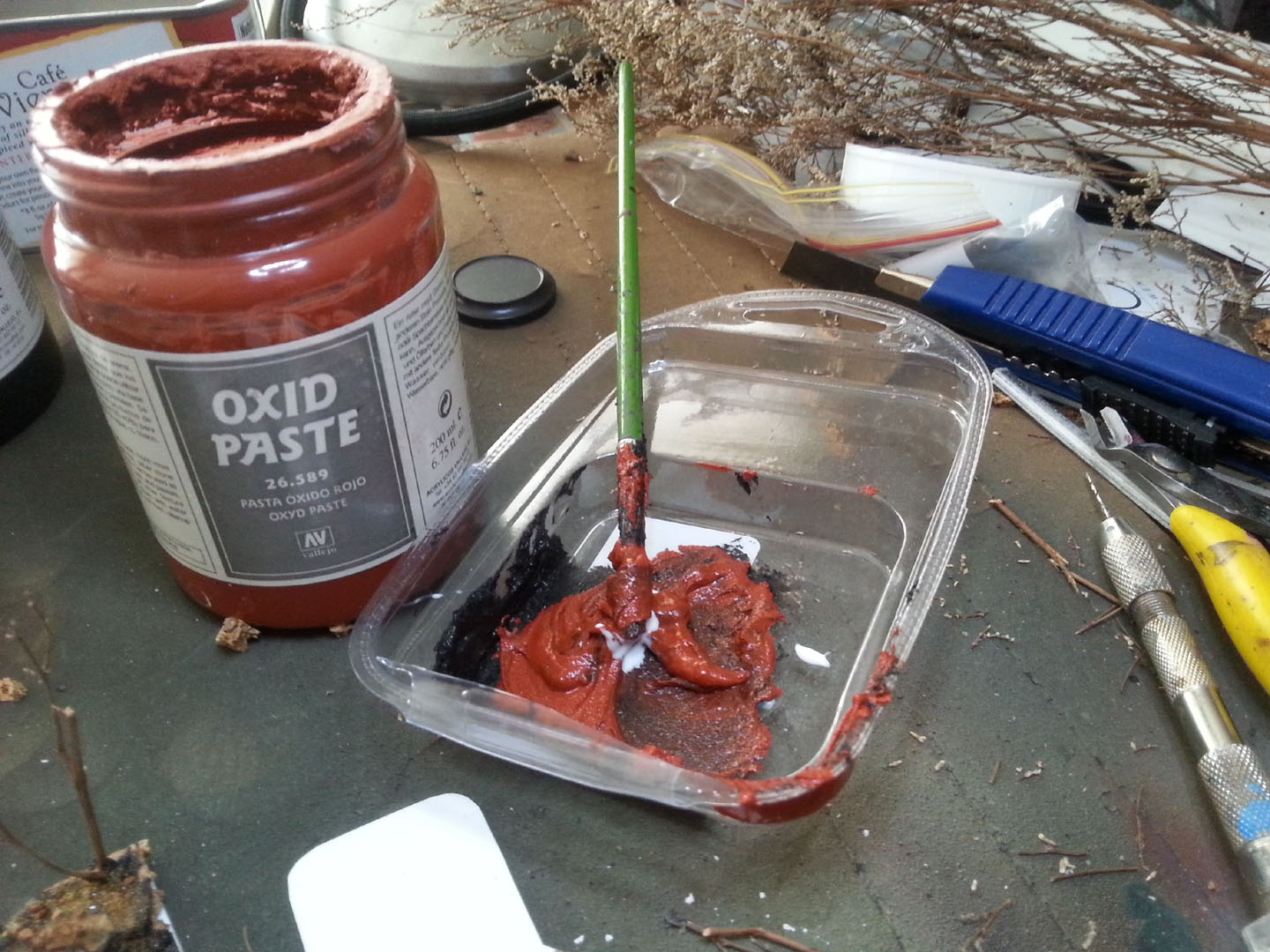 You can see that I did the two corners with a few stray pieces of cork, which were covered with the black lava.  The cork pieces would make a good base for a few pieces of tree branches. 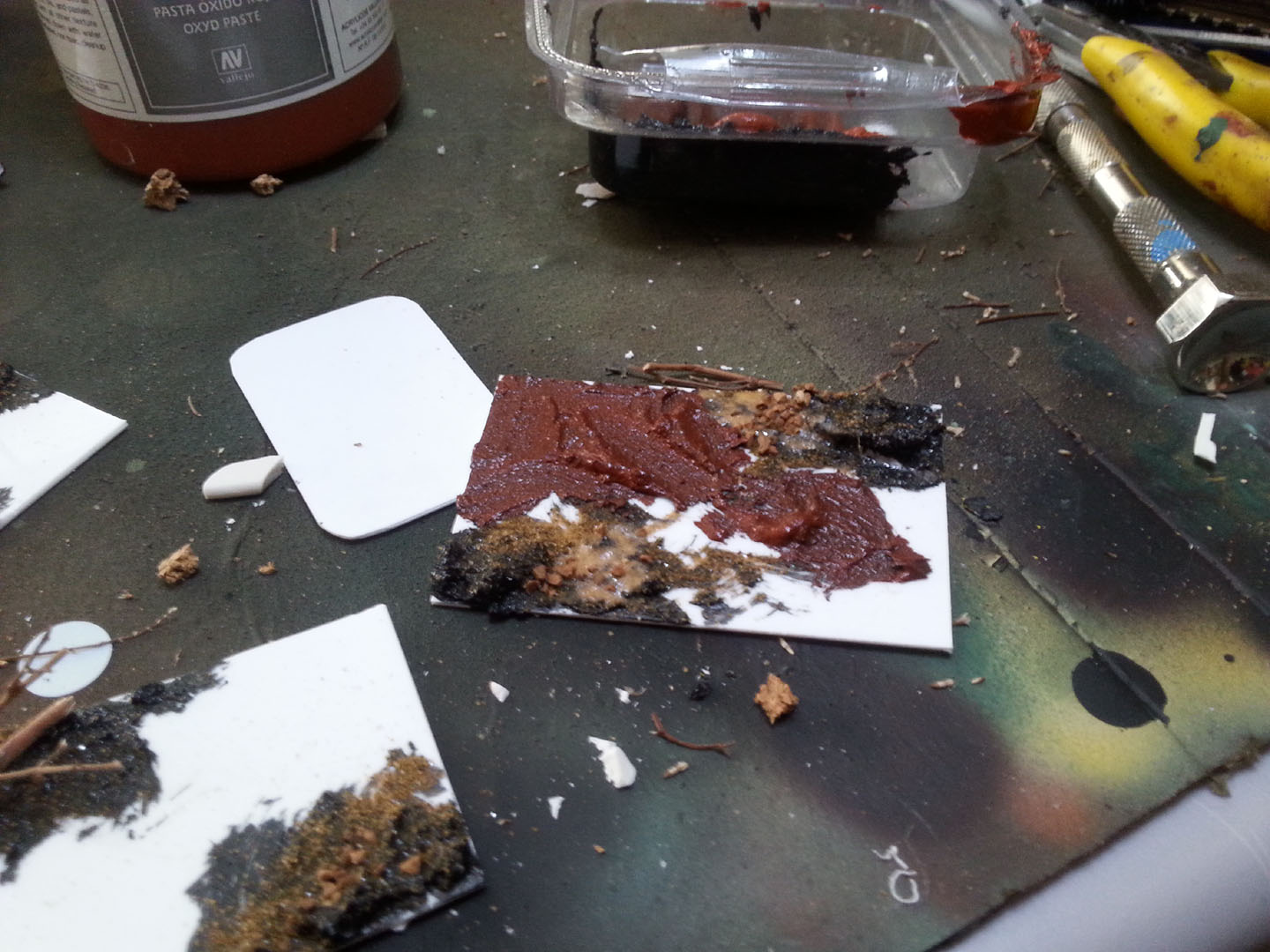 This set of images shows the ruts in the road, strategically placed for the carrier... matching the width of the treads. 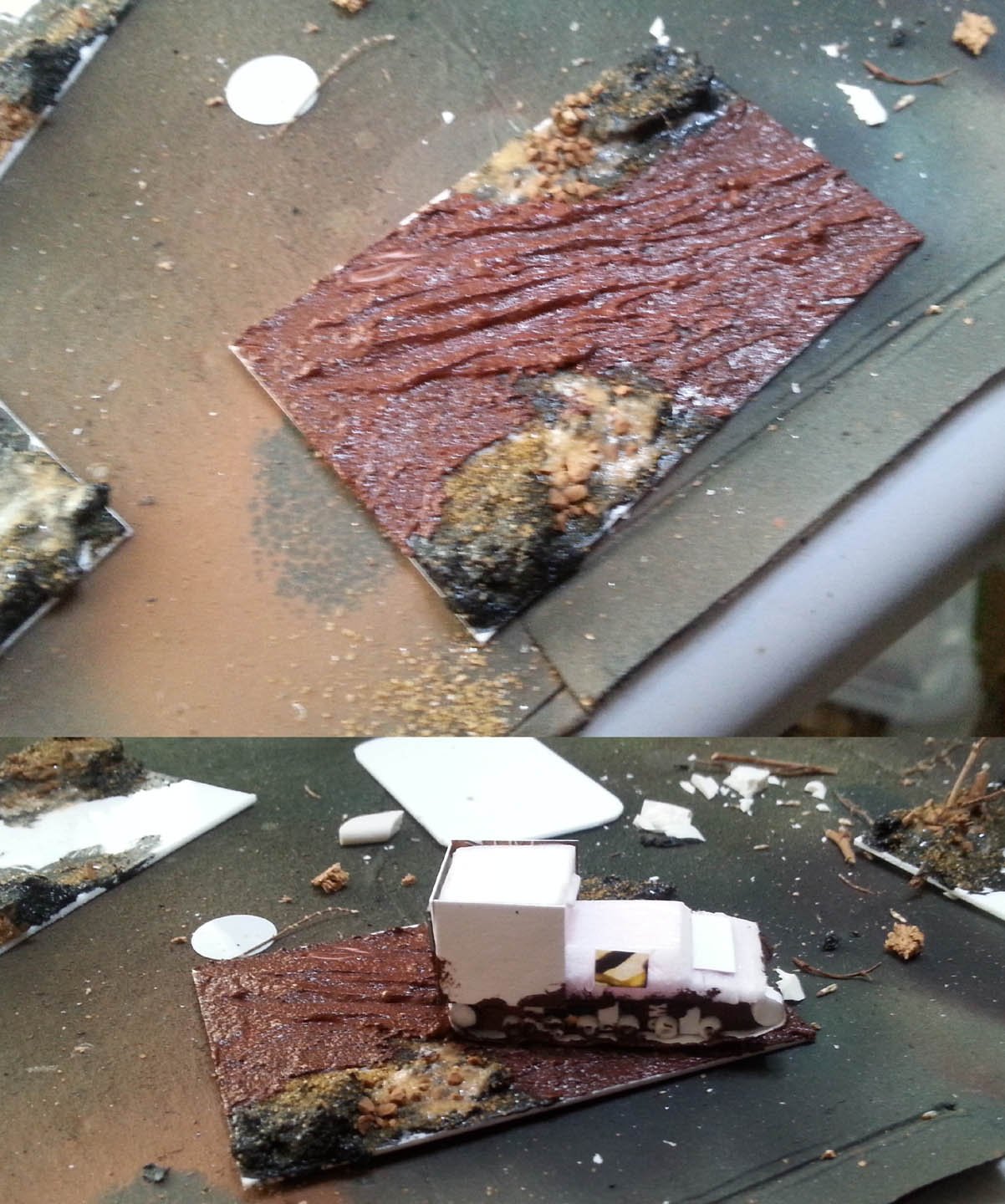 I had so much fun making these, I am almost tempted to do all of my vehicles this way!  I added the last of my broken artillery wheels off to the sides of the roads.

To speed up the process (yes, time was a MAJOR issue), I mixed a little of the black and red together to 'paint' the undersides of all the transports. 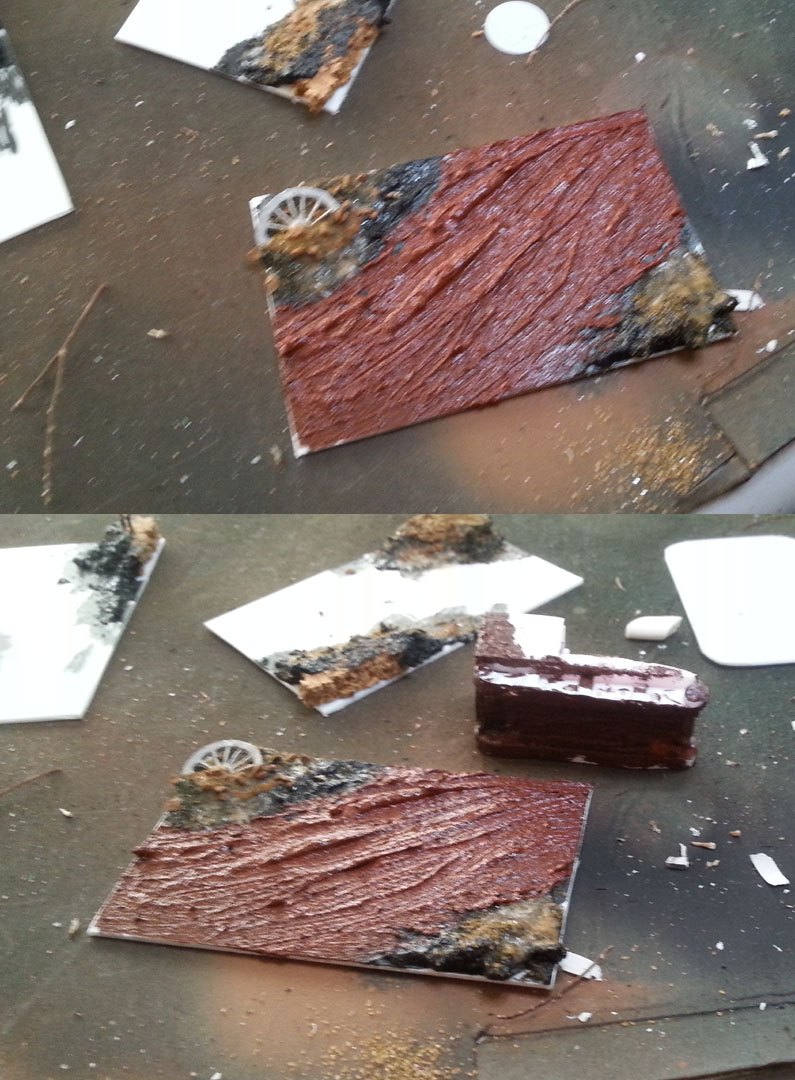 The trees on the side of the road gave the vehicles a sense of size and scale, and created more of a vignette as well.  Once these are painted, and all the rest of the foliage applied, it should be quite a scene! 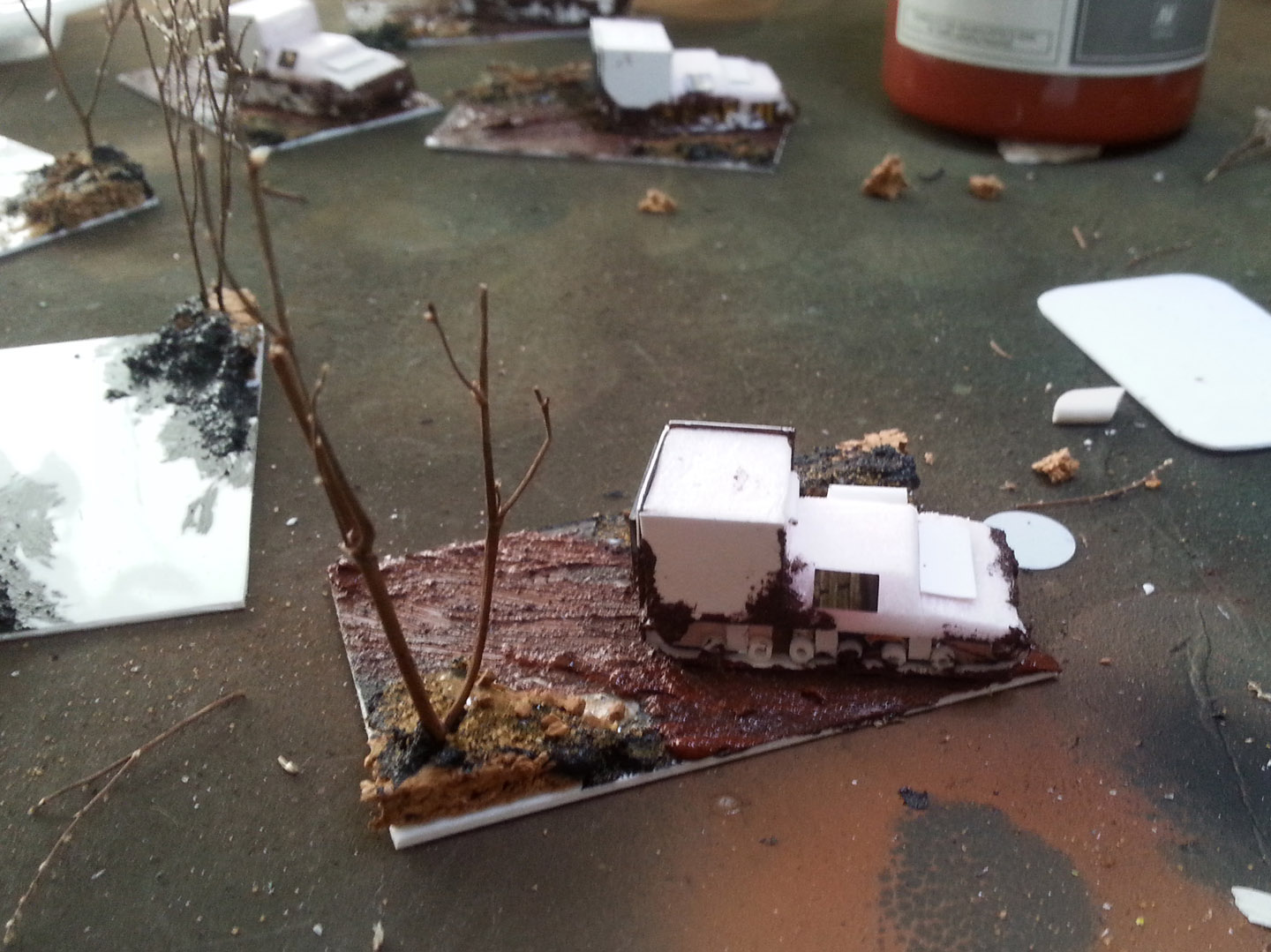 I have been saving some artificial tree foliage for many years, just for something like this.  It is a little too small for 28mm, which is why it has been set aside for almost 11 years... but it's ideal for 15mm Flames or War scale. :-) 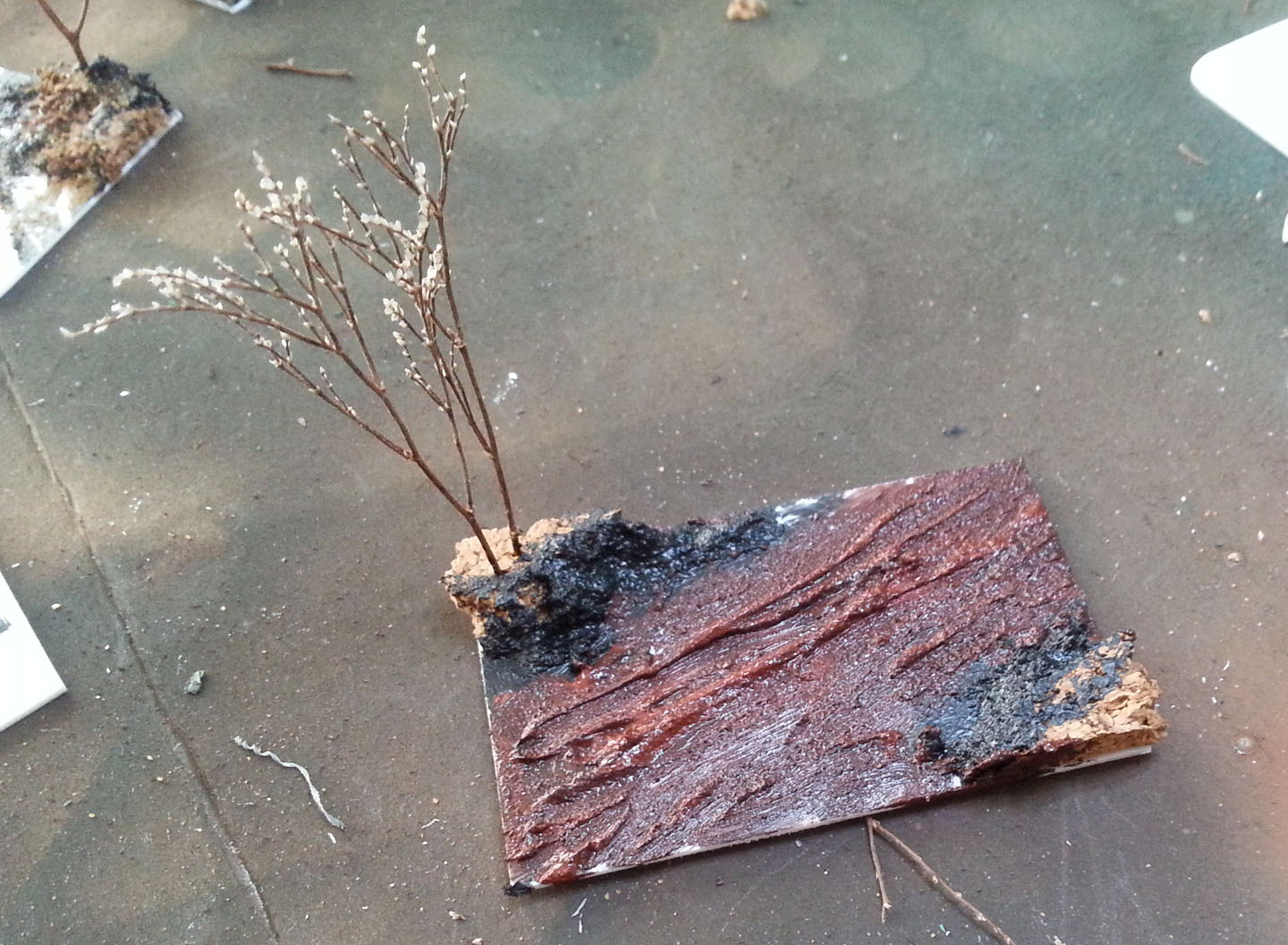 Oh yeah, did I mention that I scratch built all ten of the Lorraine Carriers?  Yes indeed!  Sorry there are no WIP images of them, but I was in a rush.  These are made from junk. Not kidding.

I used left over pieces of pink foam, plasticard, polystyrene tubing, and even paper! 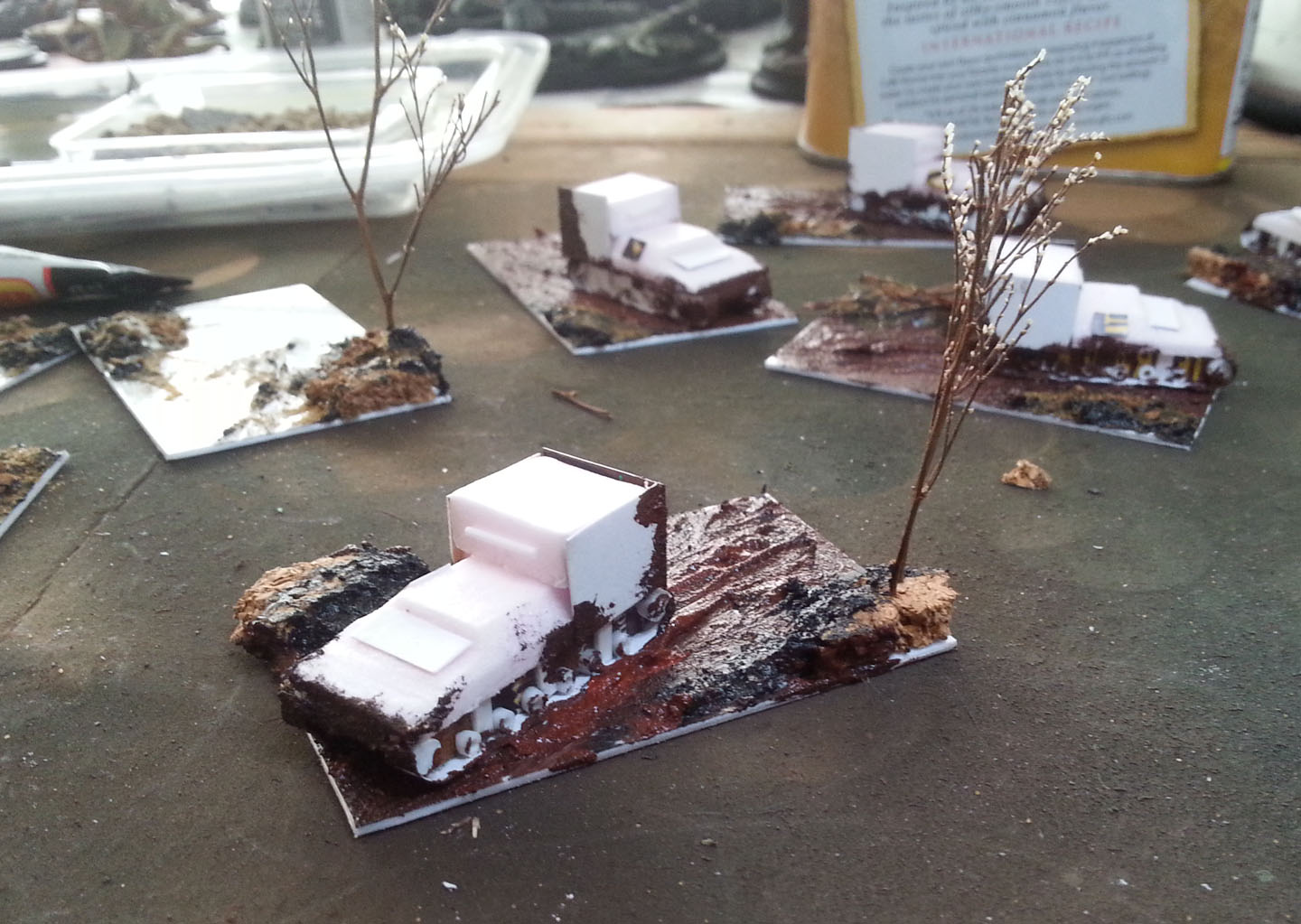 I covered most of the rougher areas of the cut pink foam with the card stock that are in the blisters of every type of miniature that you get these days.  It made a very hand (and free!) building material.

Since super glue melts pink foam, I had to be very careful about what kind of piece was glued to what.  It takes a lot longer for the Elmer's glue to dry, and the super glue does have a much stronger hold. 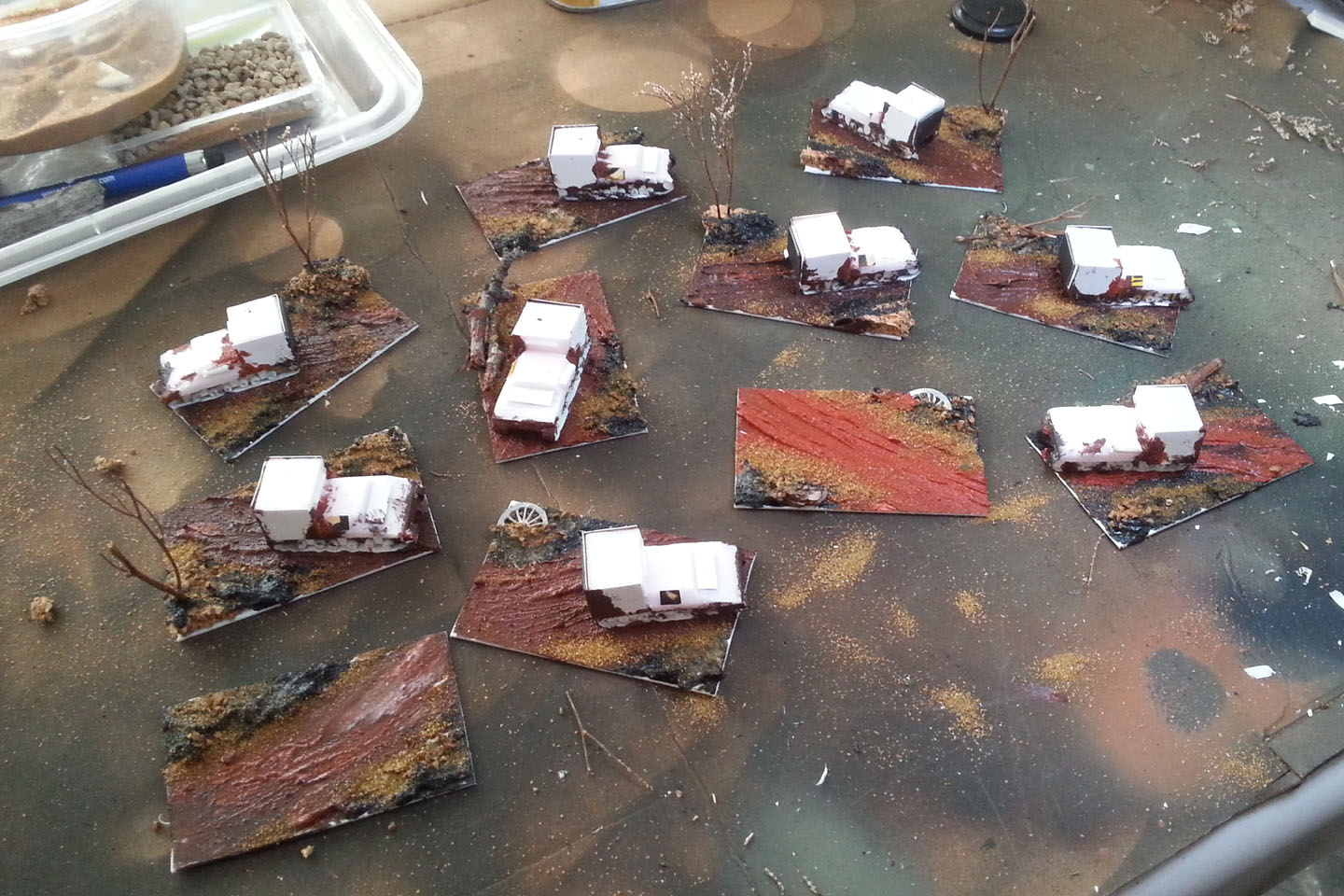 I will make the trailer sections later when I have the time, for the moment, I did a few trailers, which would house the command stands or other special weapons. Another concern about the materials used was the potential for warping and tearing them apart with aggressive brush strokes.  This seemed to be just the right time to test out the new Badger Air brush (the basic Patriot)!

It was a good choice, as I didn't damage them at all, and I was able to do my shaded basecoat phase with great speed on all ten of the vehicles.

You will be seeing these in an upcoming battle report, and the finished versions will also appear on these pages.  Stay tuned!! 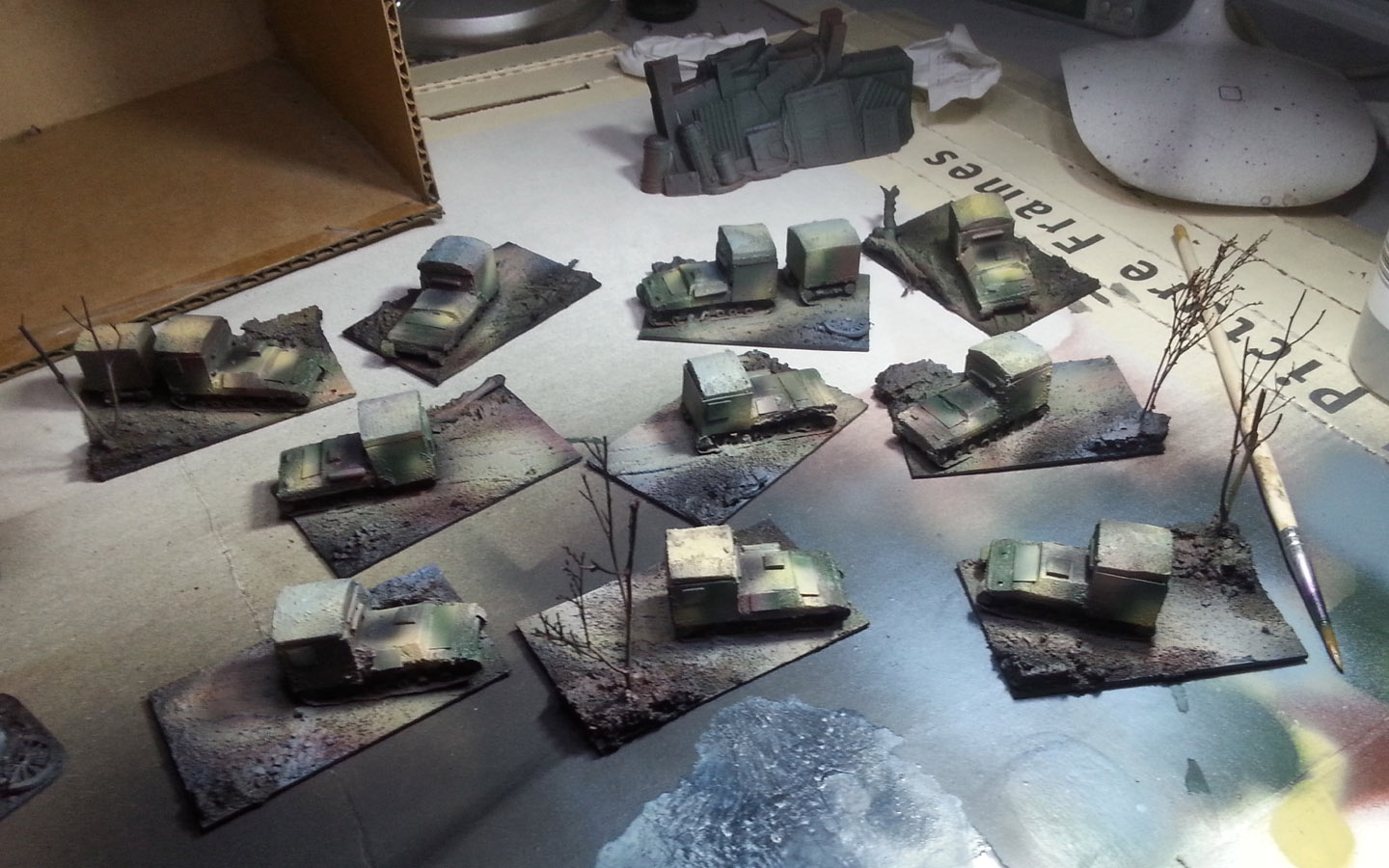