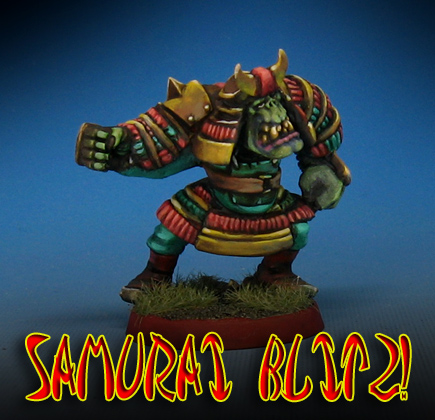 It's time to start working through a few other key roster spots for the Samurai Orcs, beginning with the all important Blitzers!  These guys were the most important players on my own Orc team, since there was a significant offensive role for them.

My favorite tactic on defense (especially around kickoffs) was to toss a goblin with block at the opponent's thrower.  If I could also get him +1 strength, all the better :-)  Anyway, the Blitzers were positioned on the flanks of my formation, and their job was to pincer move towards this toss.

Even if the goblin ended up in an area to put the ball in a tackle zone, I was happy, as the opponent would be going backwards, starting with their own blitz move.  Heck, even if the goblin scattered or bounced onto the ball... or the thrower, runner, etc., it would create more chaos, which is the main idea.

They were also turned into catchers if I could ever get them a +1 agility.  If the opponent focused too much on the offensive gobbo toss, I could always have my thrower toss the ball to a waiting Blitzer (probably with catch and dodge as well) that was capable of blitzing his own path into the end zone.