Taking back what was Ours 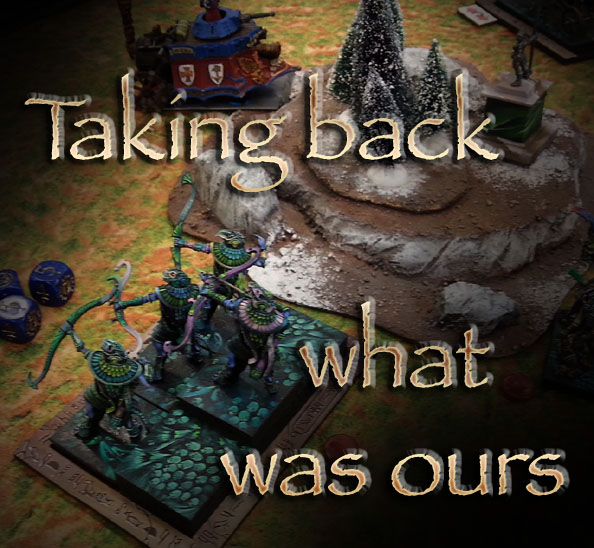 The time has come for Pseusennes to take vengeance on all those who have quested in his Tomb Cities for centuries.  While the Chaos God has seen his wishes come to life, the Tainted Pharaoh has not.  Now he will seek to destroy those who looted his Tombs in their own lands. 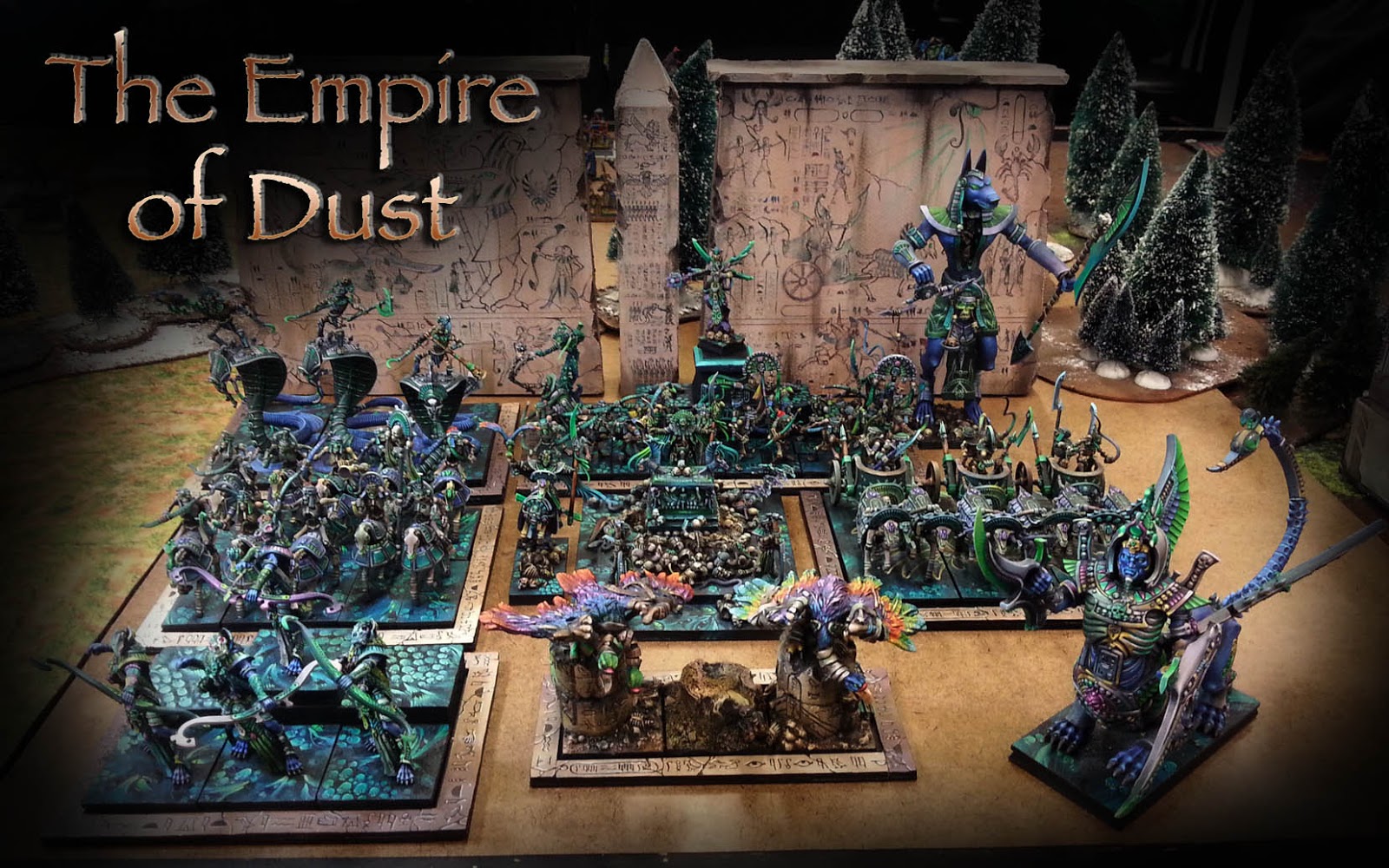 Chief among these targets are the Kingdoms of Men.  All too often, precious artifacts were stolen and brought back to their stinking, filthy cities. 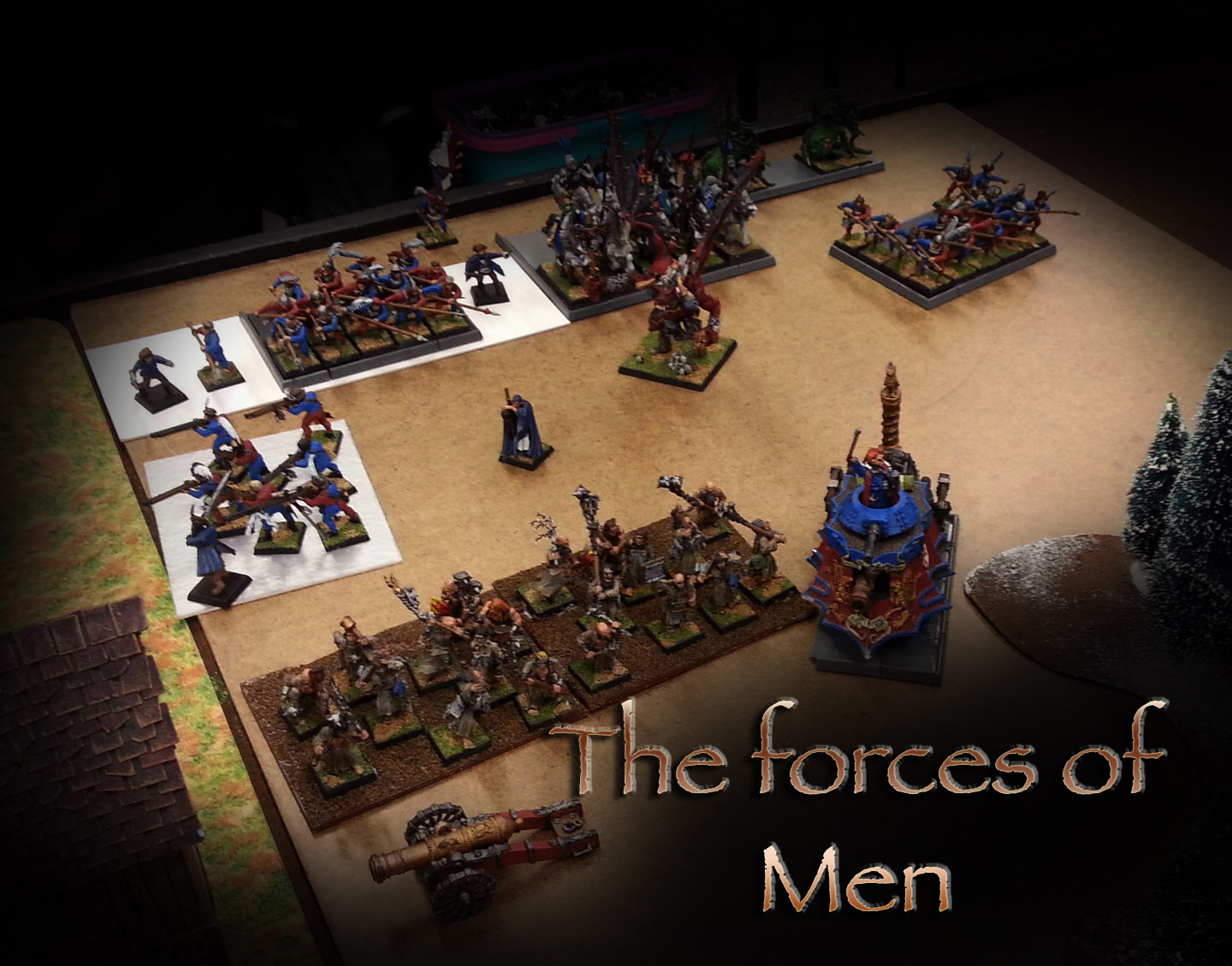 Shobik would once again stand at the forefront of Pseusennes' main strike force. 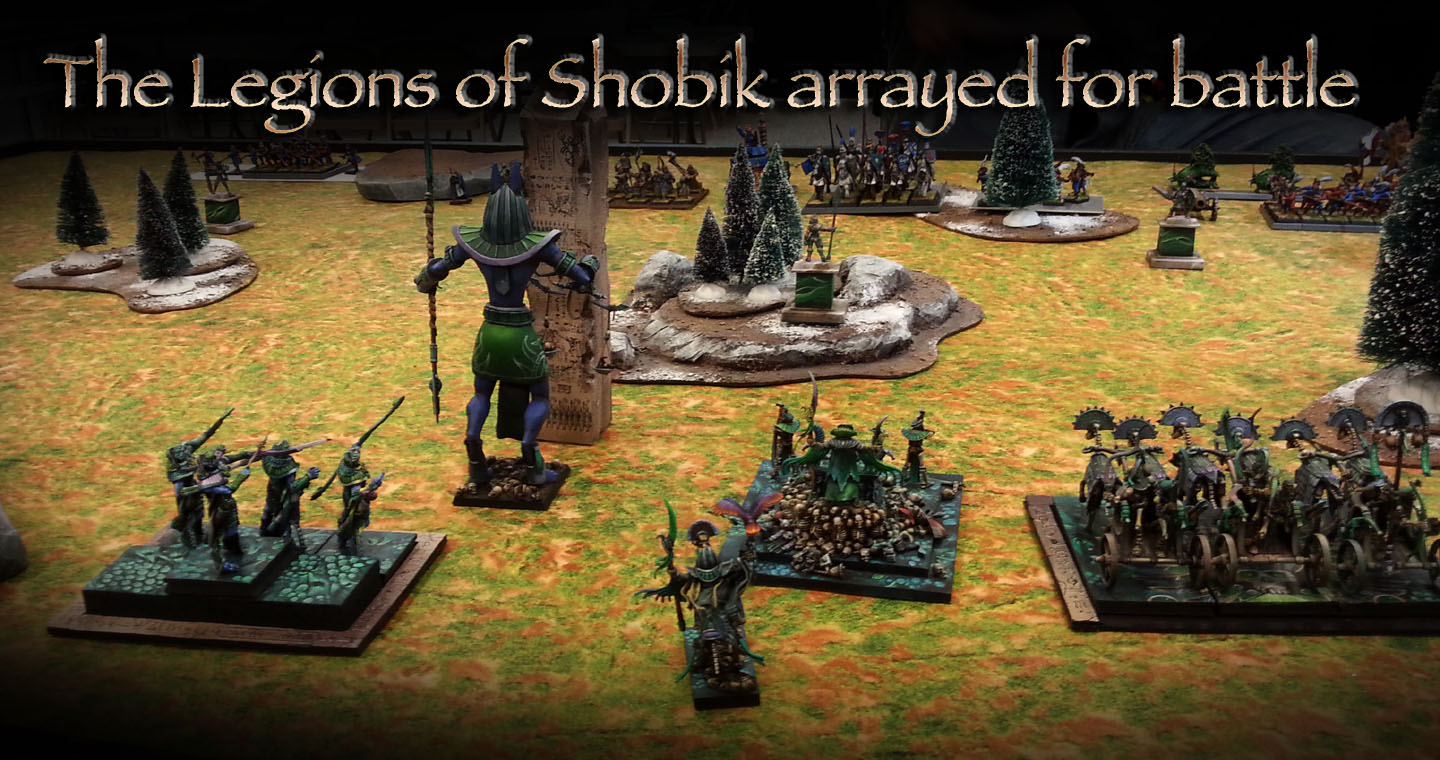 The dastardly, cowardly men had not only sought allies among the Daemons... they had with them a sorcerous scroll which decreed that even more of the Legions should deploy, allowing the Trickster to see where they would attack next in advance. 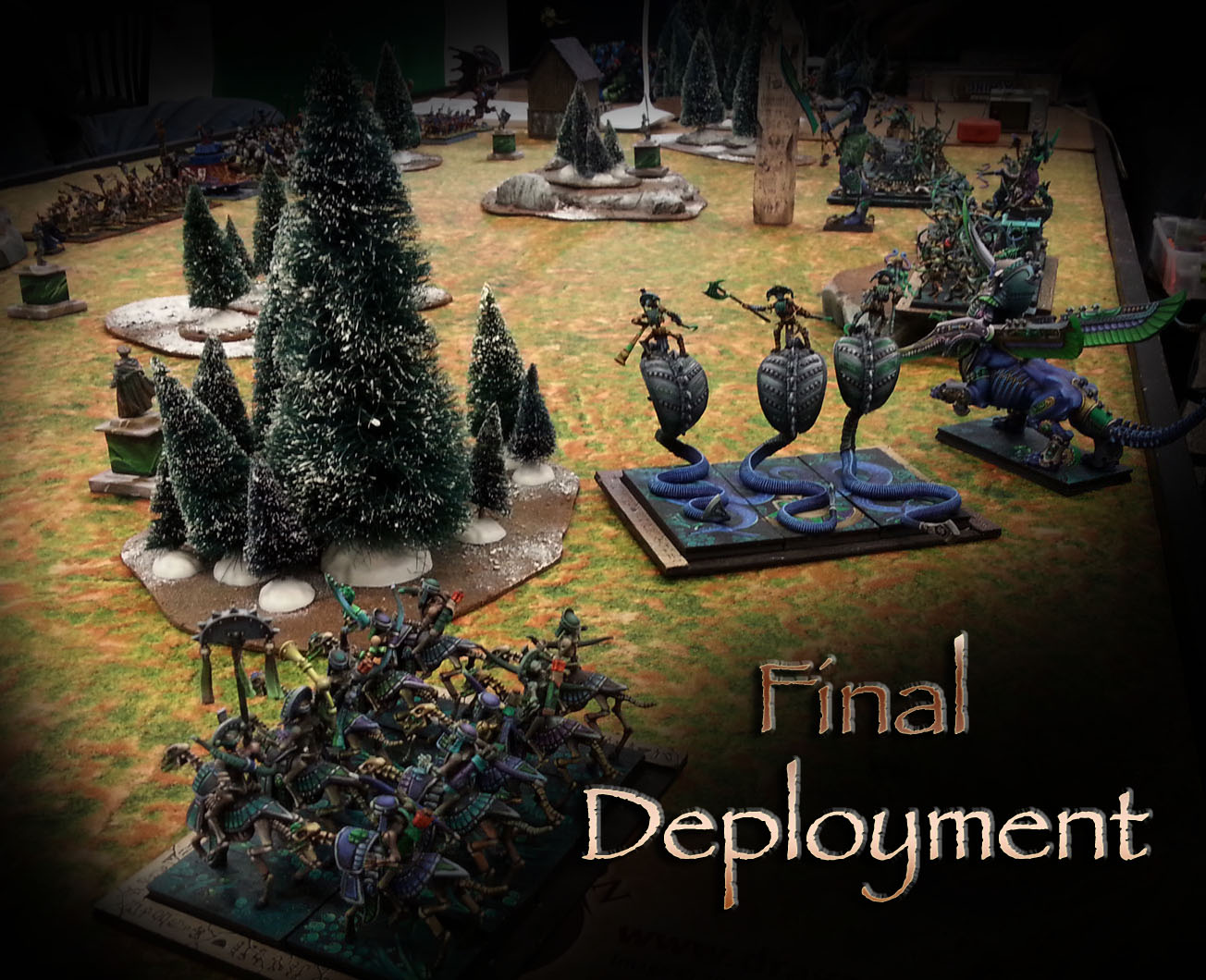 This time they would bring with them one of their dreaded engines of war, which had shattered many a construct during the looting of the Tomb Cities. 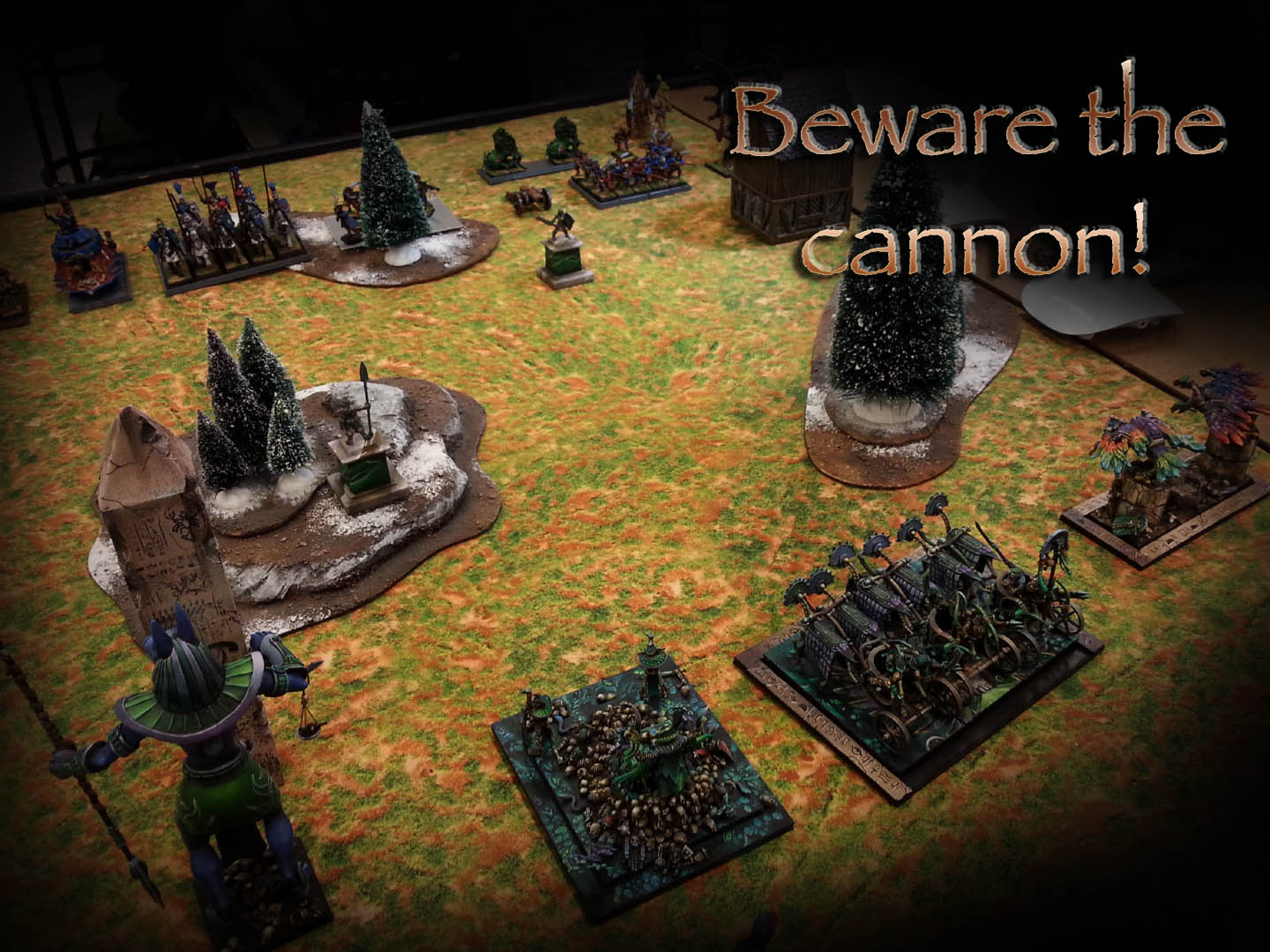 The forces of Pseusennes deployed in an arc, seeking not only to encircle the hapless Men, but also claim possession of as many of the stolen artifacts as possible.  The remains of four artifacts were contained inside four monuments that the Men had constructed around them. 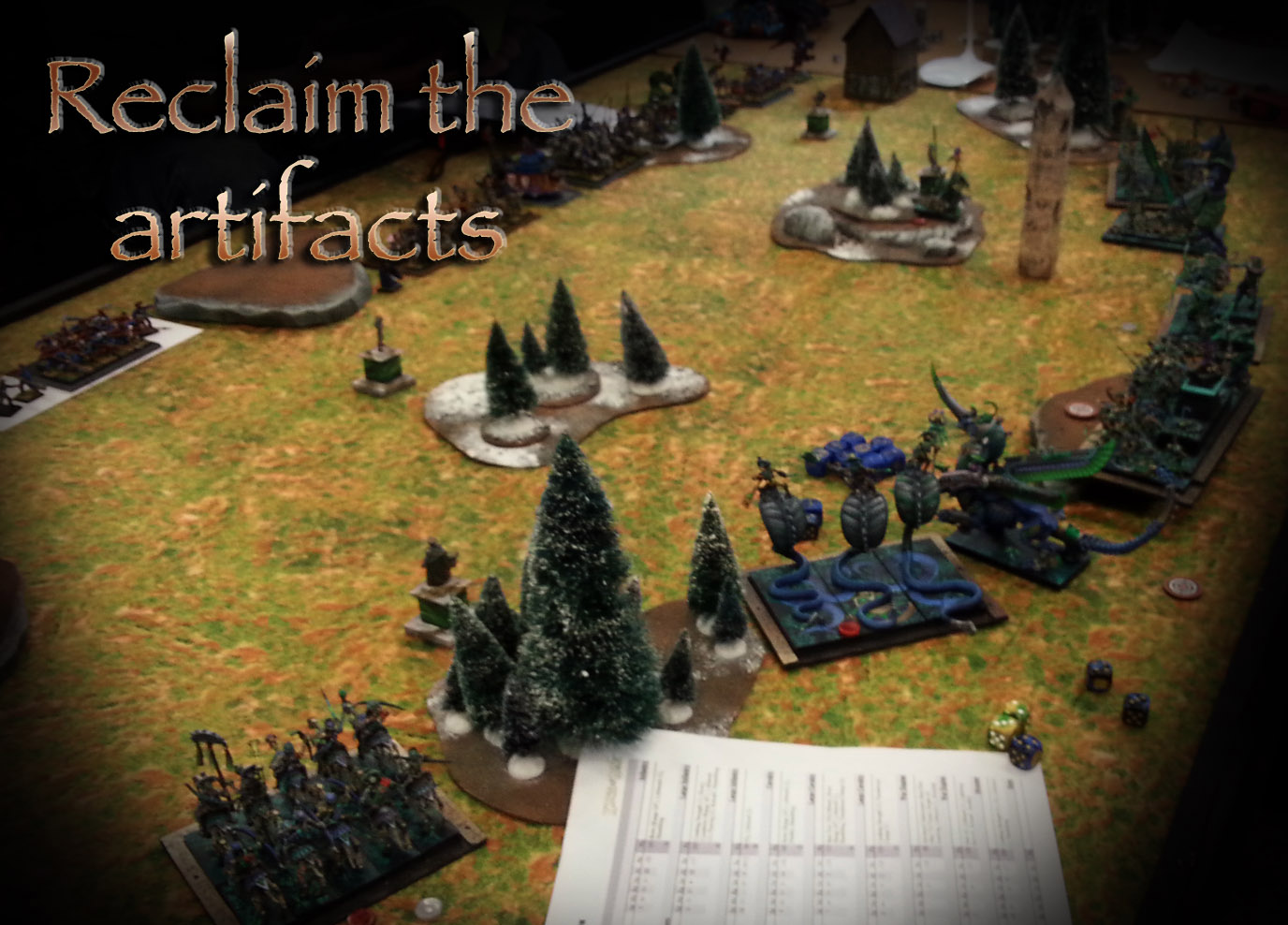 The Scavengers and the chariots moved into a position of attack.  These great birds were given a magical breath weapon by the Cursed High Priest.  Could they get into position to destroy the gunpowder weaponry of the Men before it could be brought to bear? 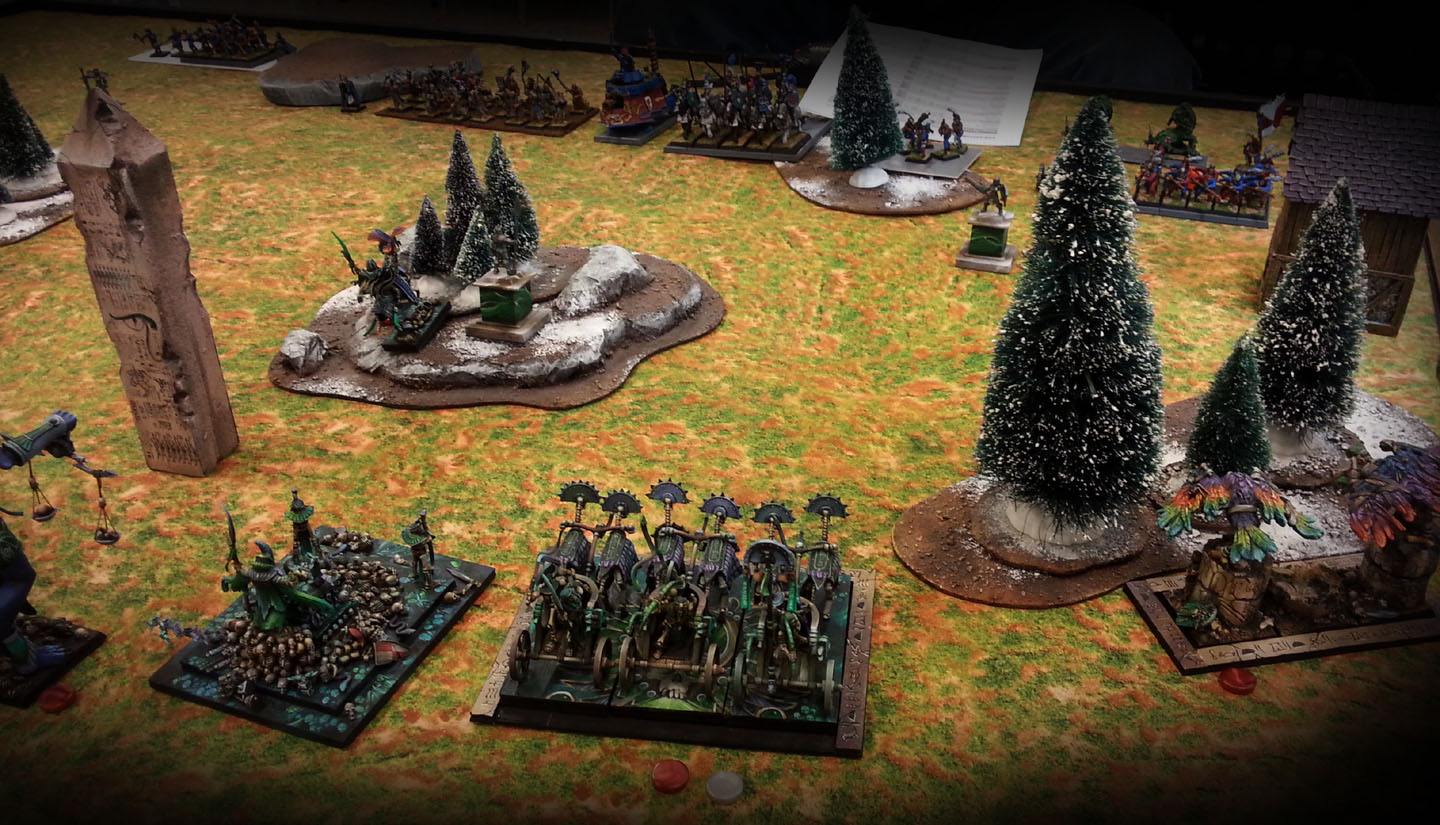 The Great Worm Riders and the Bone Dragon aligned themselves for a counter assault on the Knights, which they knew must come. 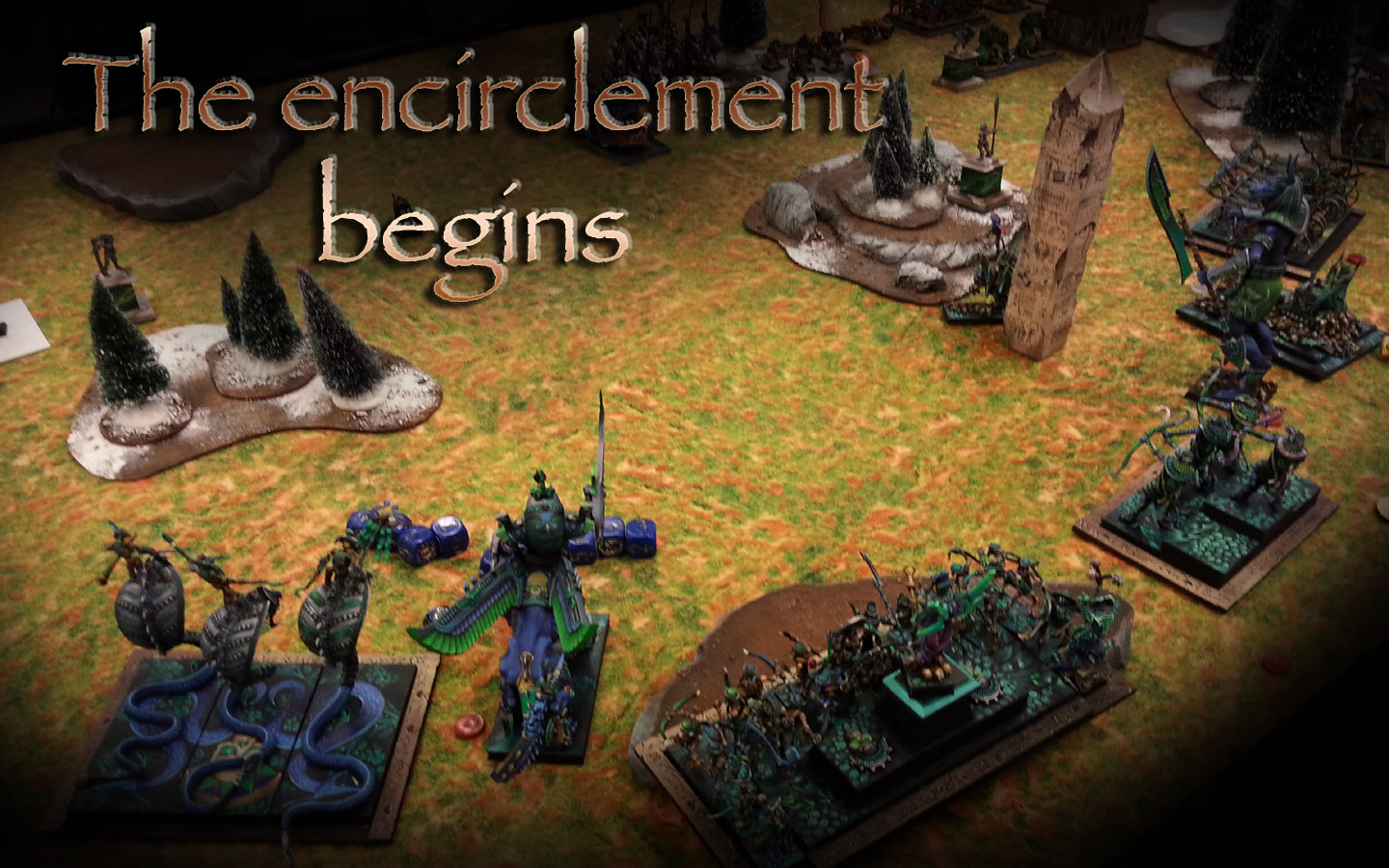 The massive Daemon beast appeared on the other side of the woods from the Scavengers.  They would be crushed by this massive abomination if they did not manage to escape!  The Breath weapon infused within them was too valuable to lose so early. 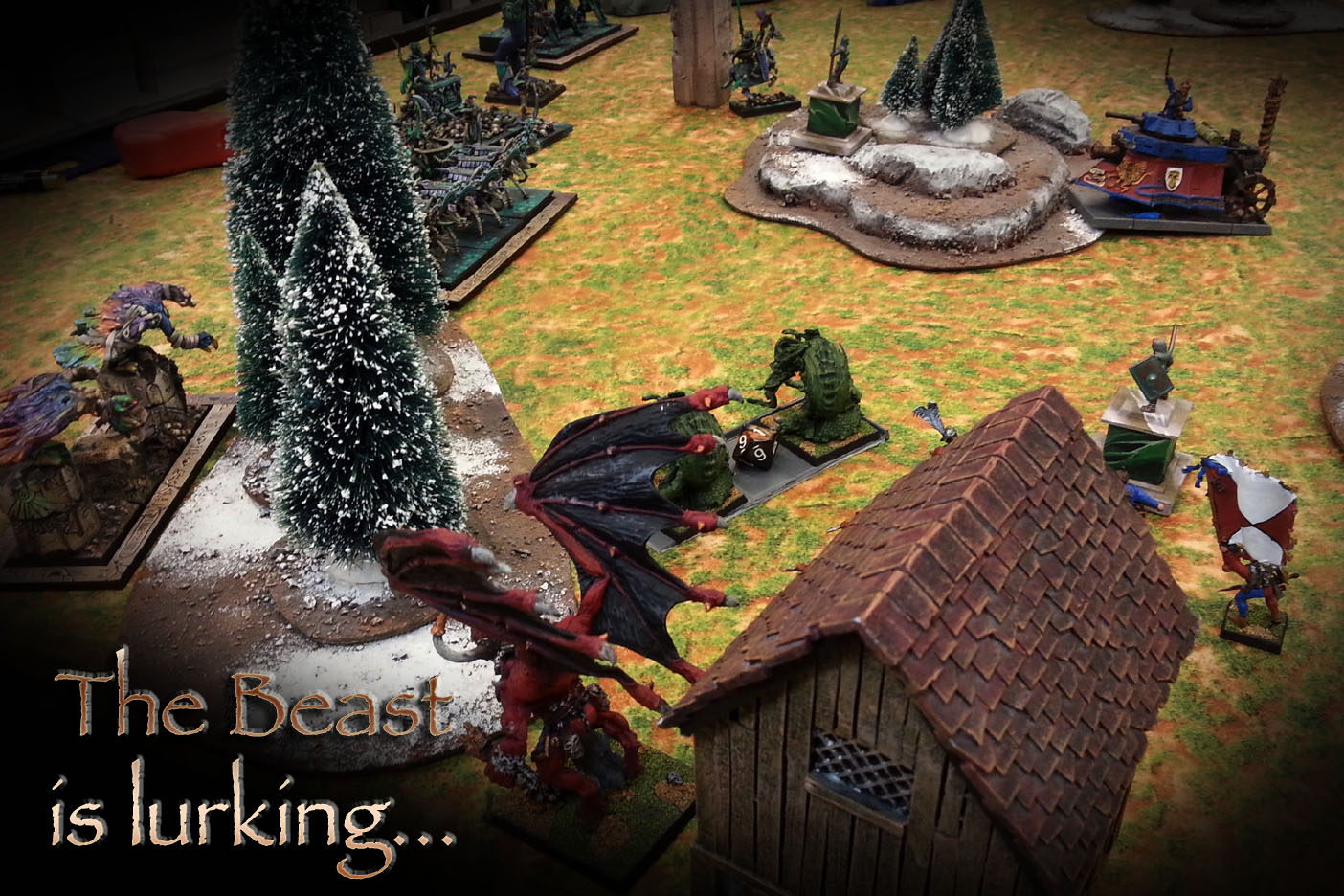 Here we see the advance of the usurpers of all that had been precious in the Tomb Cities.  See that they advance only in great rabbles and mobs, a feeble attempt to give each other courage to stand up to Shobik and his warriors. 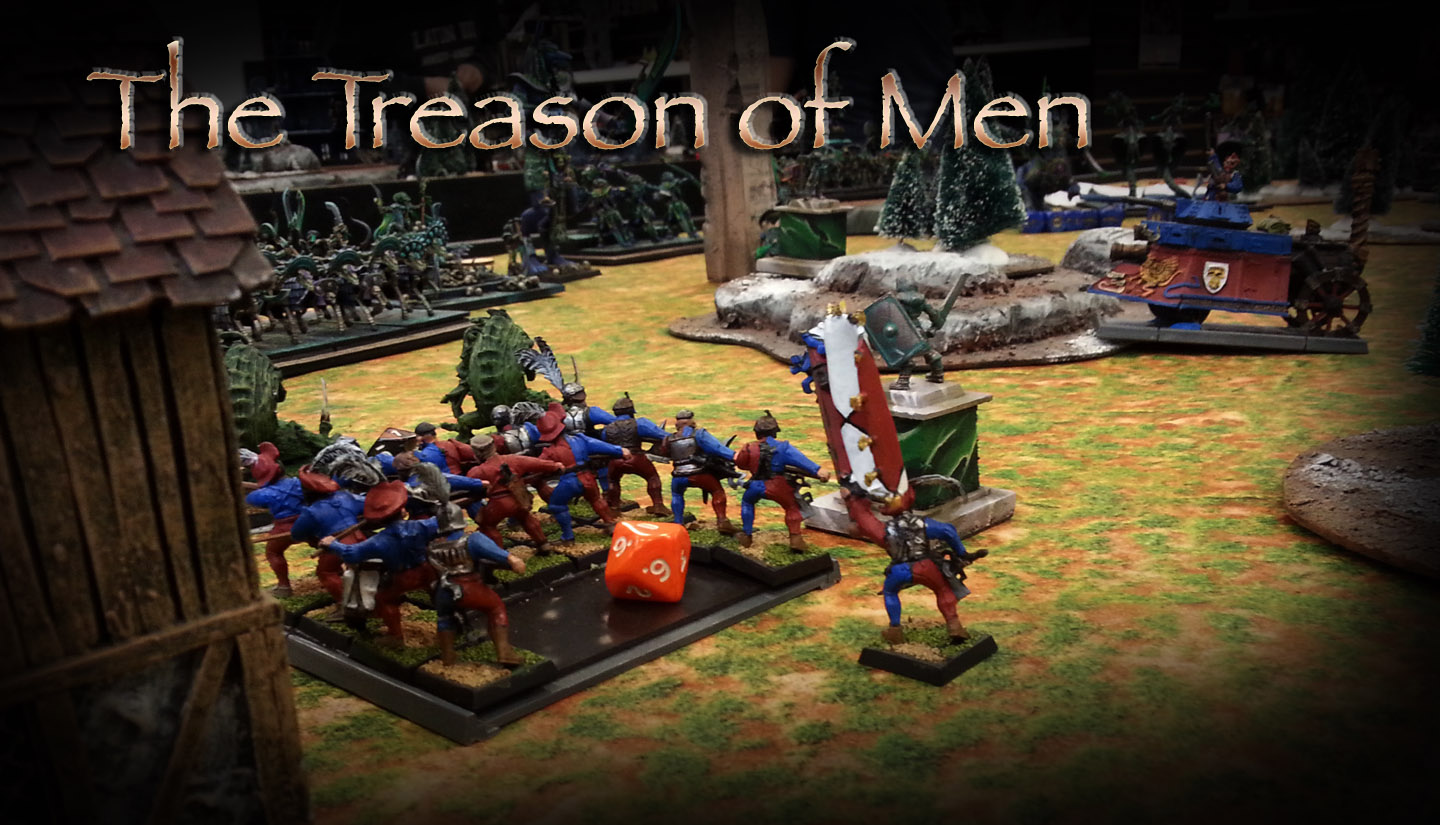 Shobik saw these mobs advancing on all fronts, and chose to make yet another sacrifice of the Enslaved Guardians.  They were pushed forward from their firing positions, which no longer could see the tiny monkey-like creatures moving between the trees.

The magical power was so great, so focused, that the Enslaved archers were moved nine inches forward!  The Monolith apparently had a great deal of magical force to bear! 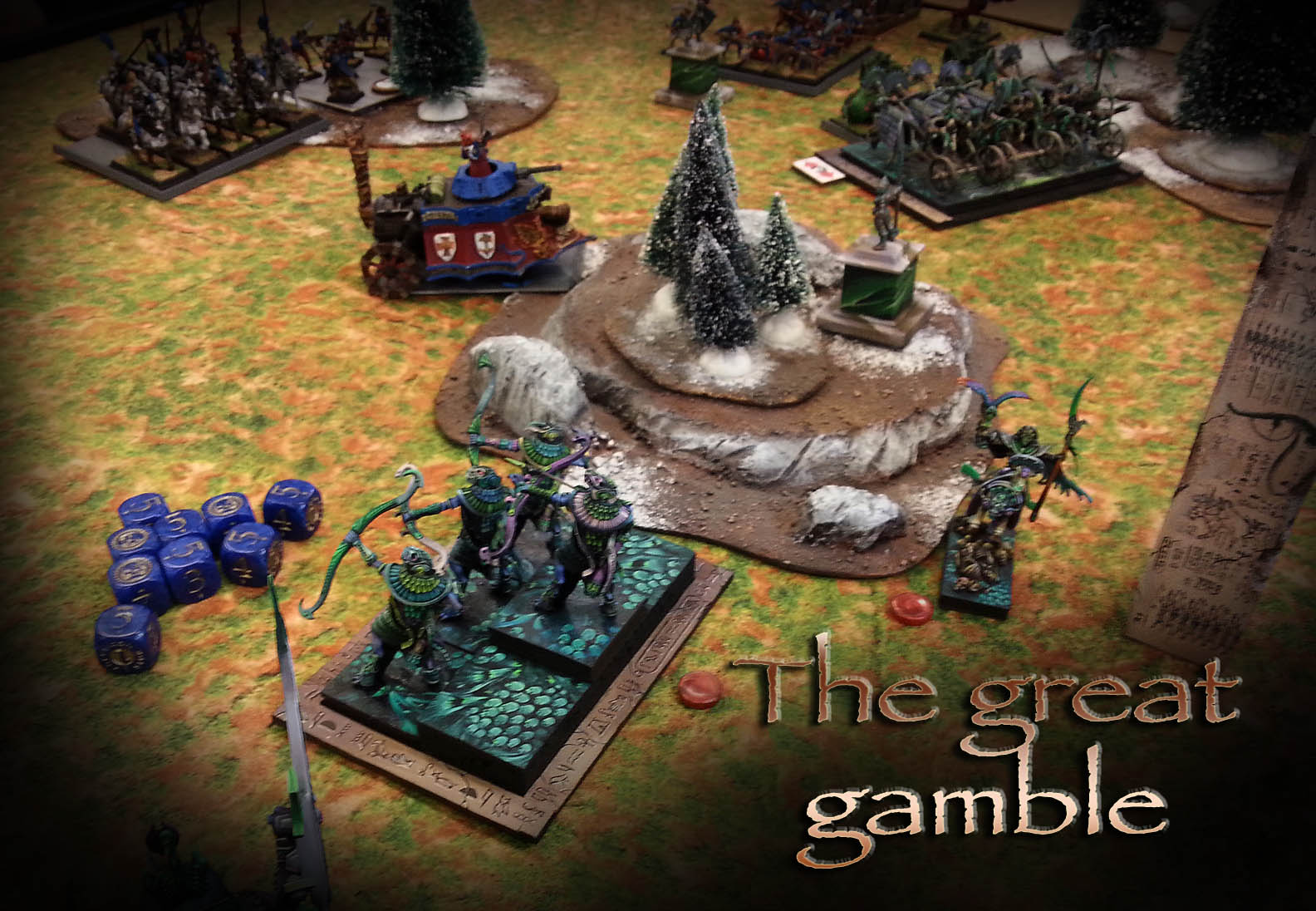 Drawing inspiration from their battle standard, and the Beast, the Men charged forward and sent a unit of Revenant Chariots back into dust.

With great mobs of Men surging forward, backed up by wizard and cannon alike, could the Forces of the Tainted Pharaoh emerge victorious?

Find out in the next exciting episode!!! 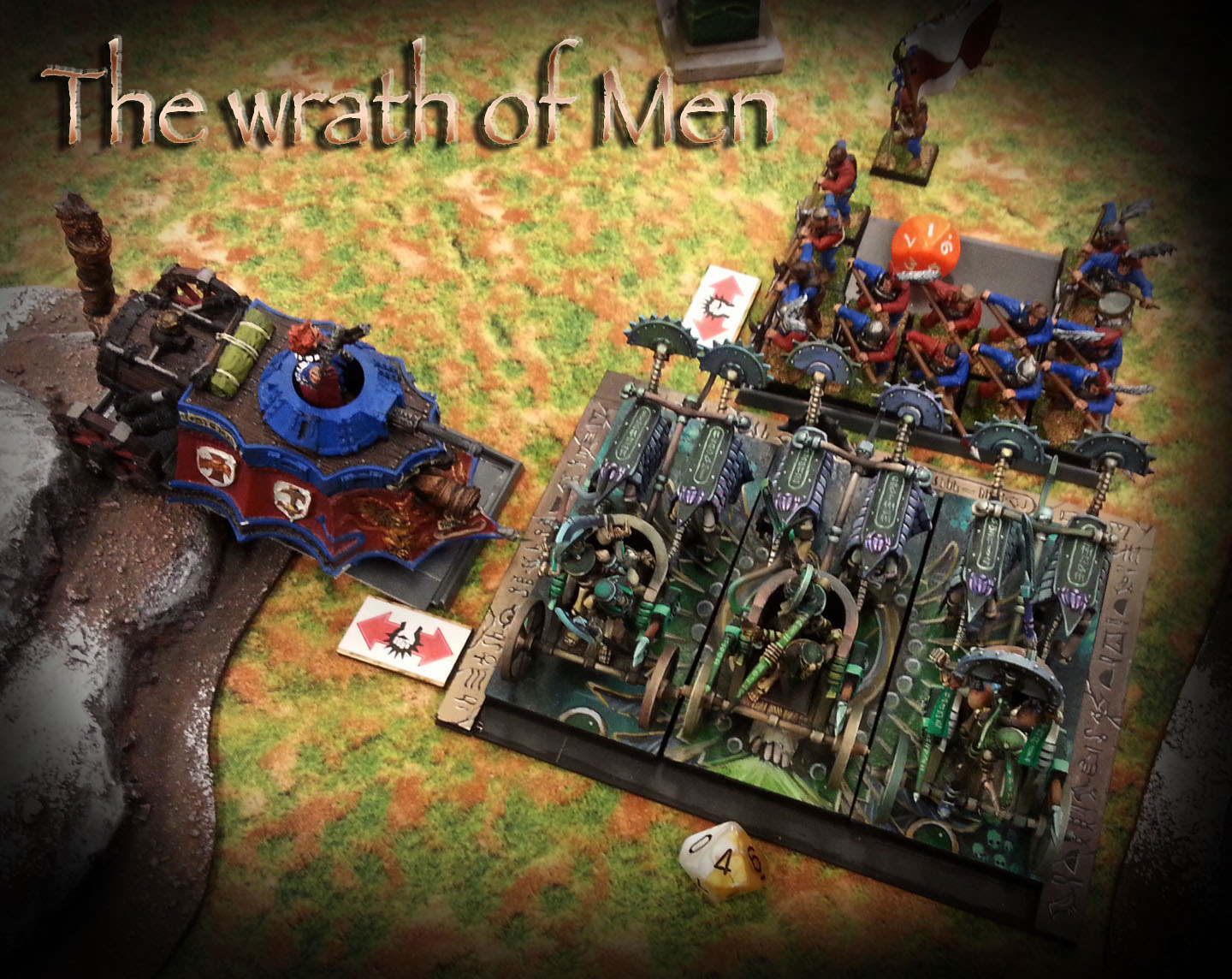 Posted by wappellious at 1:14 PM No comments:

Being a Good Host 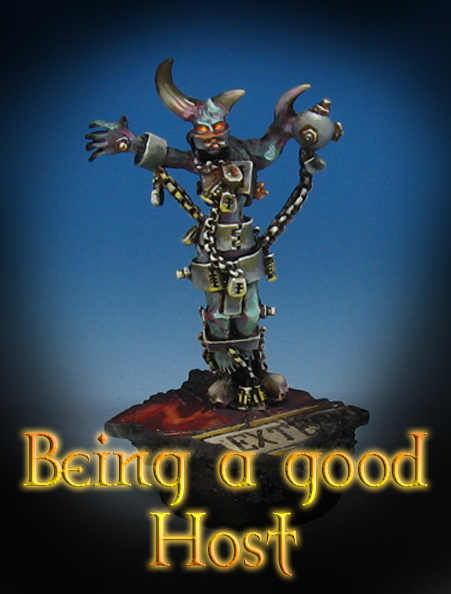 We step back once again to reveal another of the old timey 4th edition Demonhunters army!

I had one Retinue with 3 of these Demonhosts, which never did much of anything, but they were fun to paint :-)

I wish that they did more killing of the enemy over the years.  The potential of their abilities was just too random.

I'm thinking these could be interesting in more of a fantasy setting now...