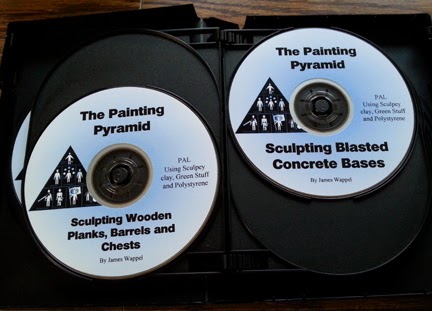 Ok folks... as many of you know, this has been a rather unprecedented winter here.  We have set records for snowfall and temperatures.  These have combined with each other to create a real nightmare since December 29th.

This has led to multiple delays in my deliveries.  In fact, the cases that I am showing you in these pictures were delayed almost 2 weeks in arriving at my door.  That has been typical.  Just getting a hod of disks for burning has been a challenge, as all of the delivery services have been grounded time and again.  Grrrr!

The cases are obviously quite important.  Even though nearly all of the disks have now been burned, there is not much I can do with them until I have cases!  This is particularly true for multiple disk purchasers.

We searched and searched for 20 disk hard cases, but the best I could do were cases that hold 14.

This is an example of a ten pack.  Many of the pledges were geared around 20 videos with 2-6 'extras' as the case may be, so I have also purchased a number of other cases which hold those counts. 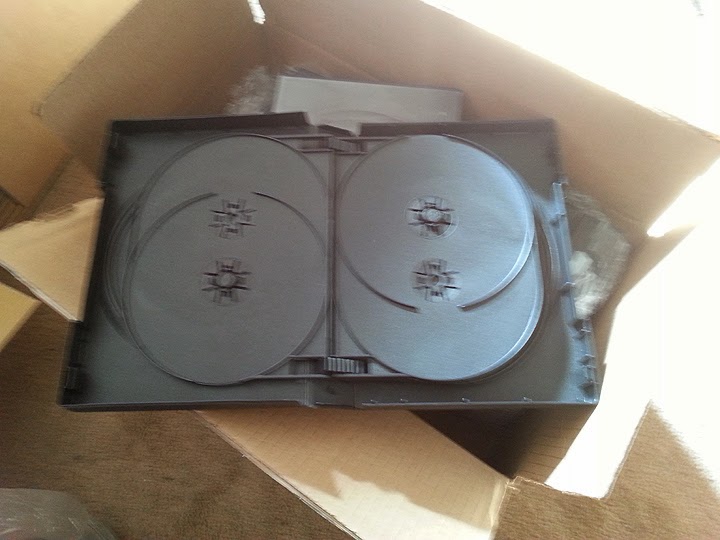 I filled up one ten pack with disks, which was really cool to see!  Much heavier with that full load of knowledge :-) 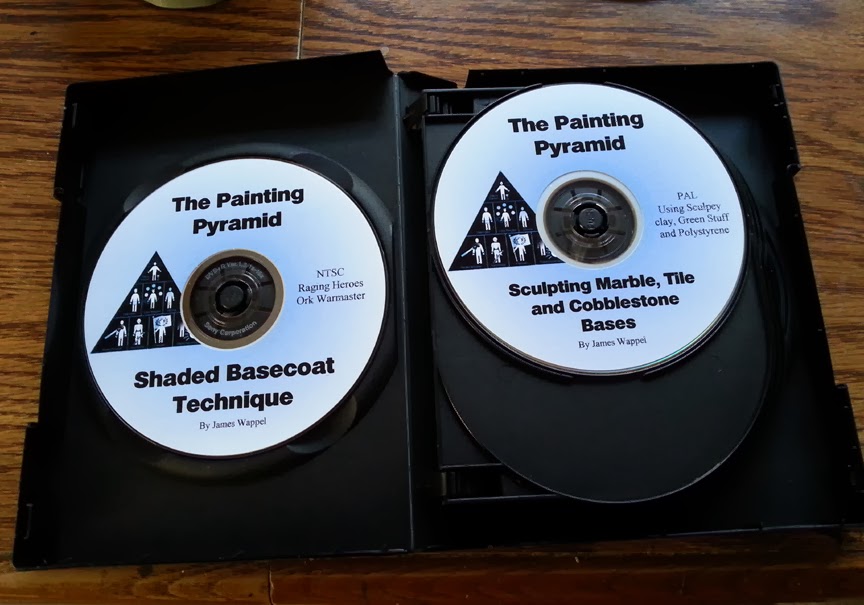 This was the first of many boxes of single disk cases.  Once the first box finally came, I could work on the final package art. Don't worry, the real thing actually fits the case. ;-) 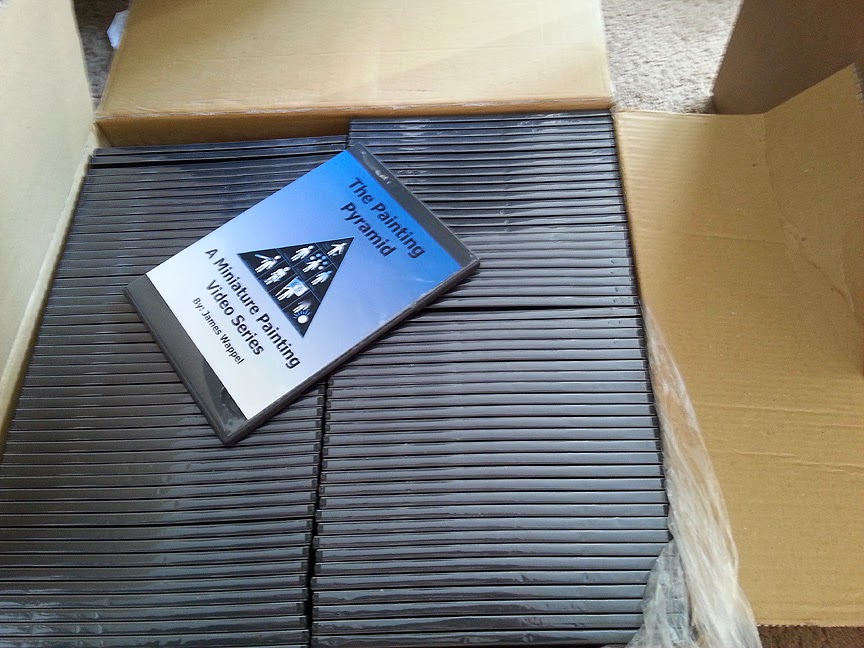 A view of the test graphics for the back of the case... 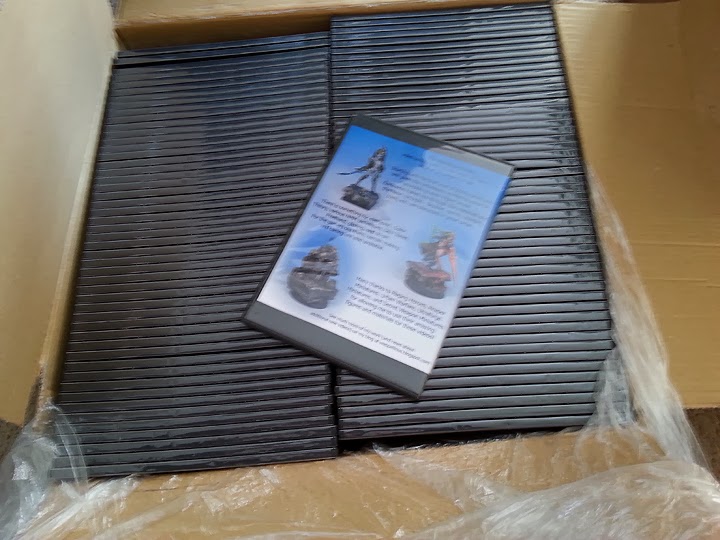 I also bought a number of two disk cases, since that will help with the add on stretch goal disks.  This was an experiment to see if I liked clear better.  To stay consistent with the big cases, I am going all black from now on. 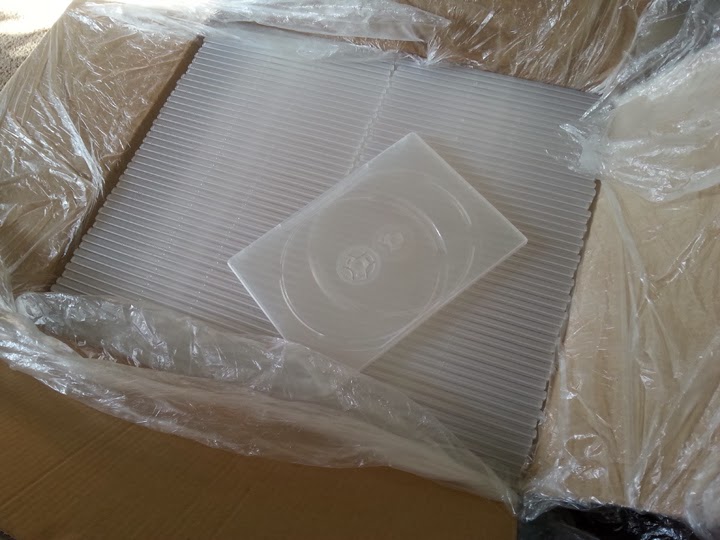 This is what 1,100 disks looks like.  There are more being burned right now, but this lets me get a nice start on sending out packages.  Yes, that is right, I am starting to divvy these up into pledges.

It will probably be a few weeks before the big stuff goes out, since I will need more of the large cases.  Those have been delayed by the latest weather madness!

Speaking of which, the crew at CoolMiniorNot is doing their best on the downloadable versions.  For two weeks, ice storms mostly stranded them at home if they were lucky, on a highway for 14 hours if they were less fortunate.  MRE's and the National Guard were involved.

At any rate, I will give the high sign here once they have those available for download.

I do realize that people are very anxious about all this.  Believe me, my own anxiety is a thousand fold.  Over twenty nights of no sleep just this year alone.  My apologies for all the craziness. 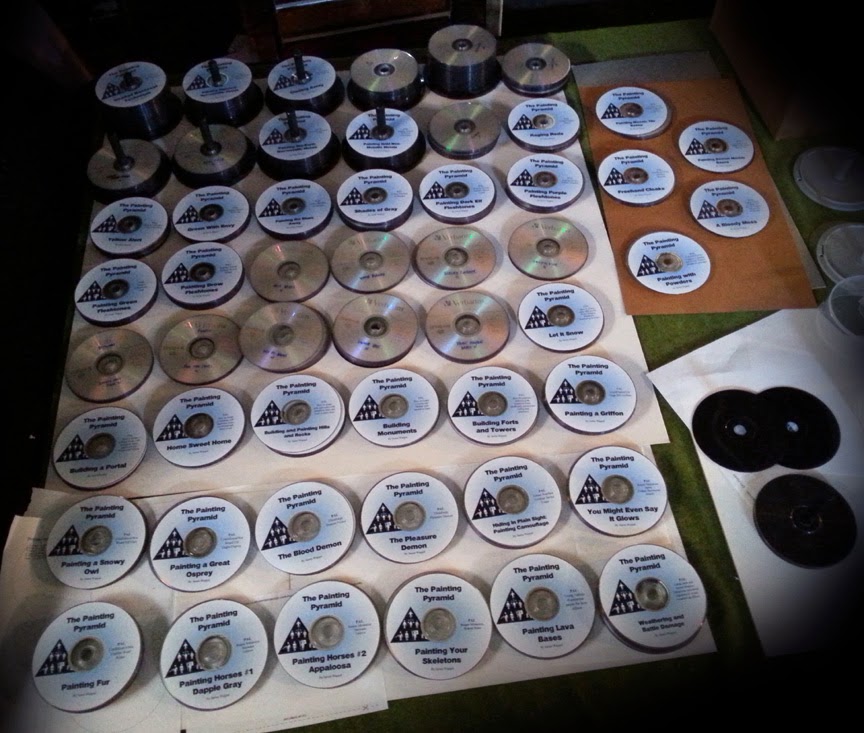 Posted by wappellious at 5:08 PM 9 comments:

Bases for the Sisters 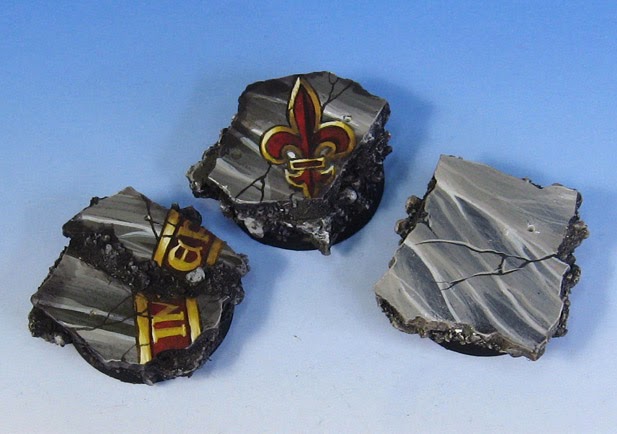 I needed some more bases for those red Sisters, so it was time to get down to it.  The bases were the usual sheet of baked sculpey clay on cork.

A basic warm gray is applied to start the marble veins... 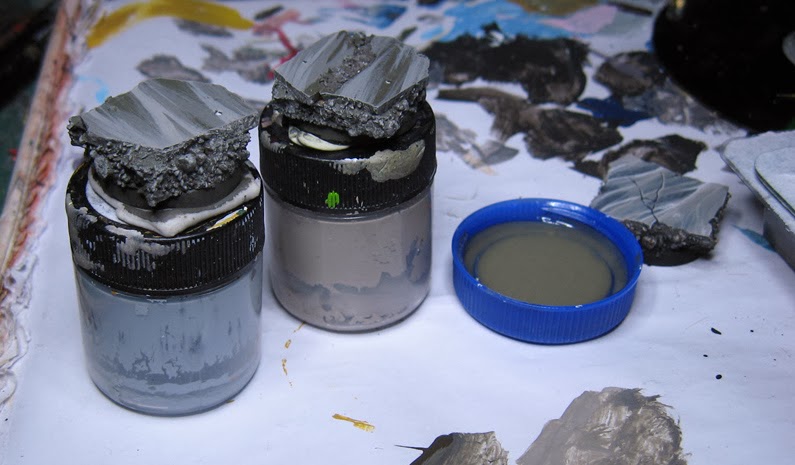 Once the pattern is established, it is more clearly defined by adding lighter seams of color. 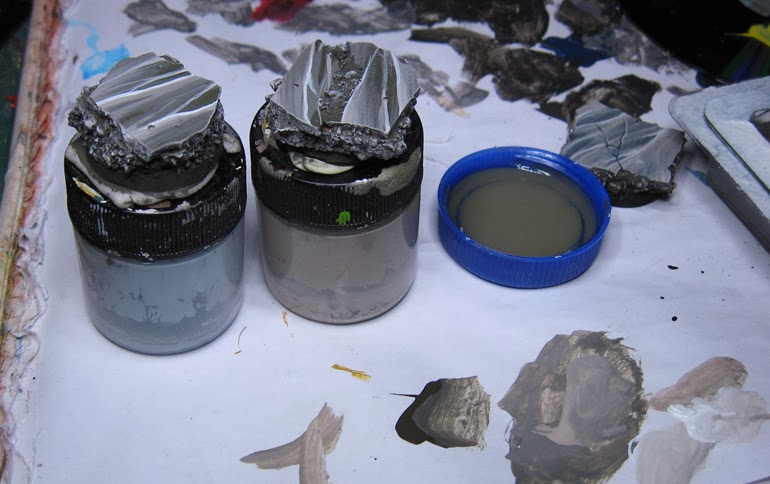 Some freehand designs are added, similar to what I have done before. 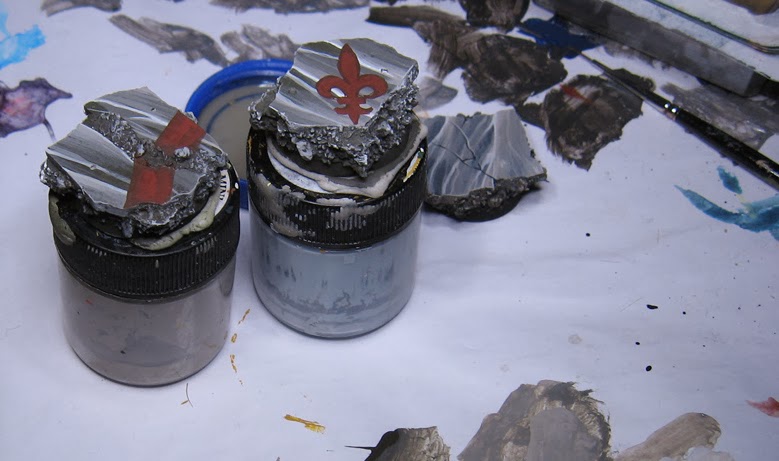 After the basic reds are laid out, some tan is used to create some areas of trim and even a font. 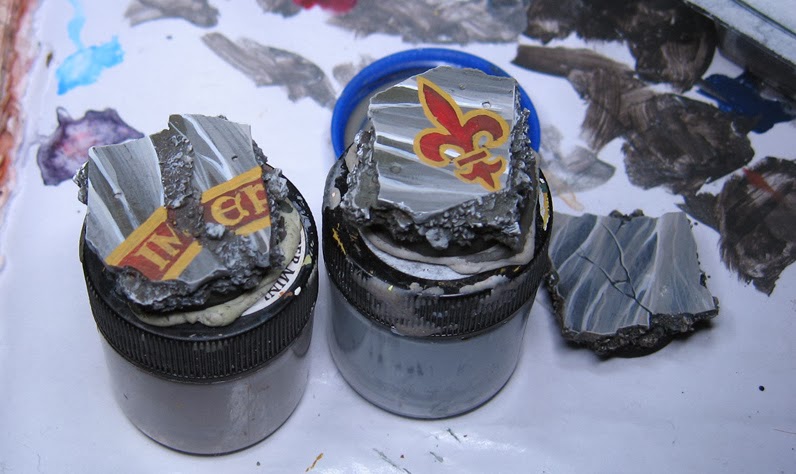 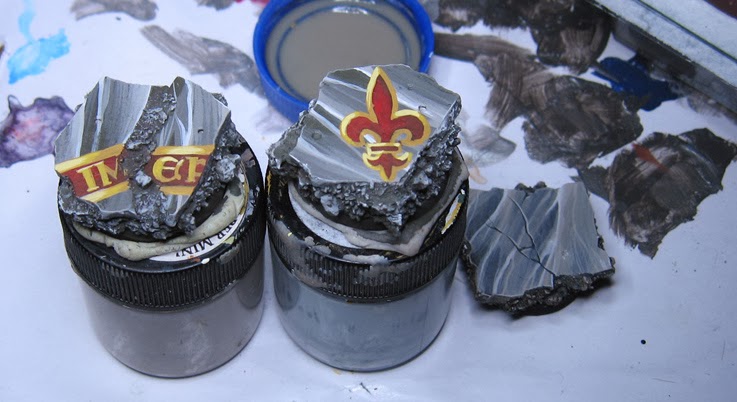 A dark blue/brown mix is used to create shading, as well as some definition and cracks. 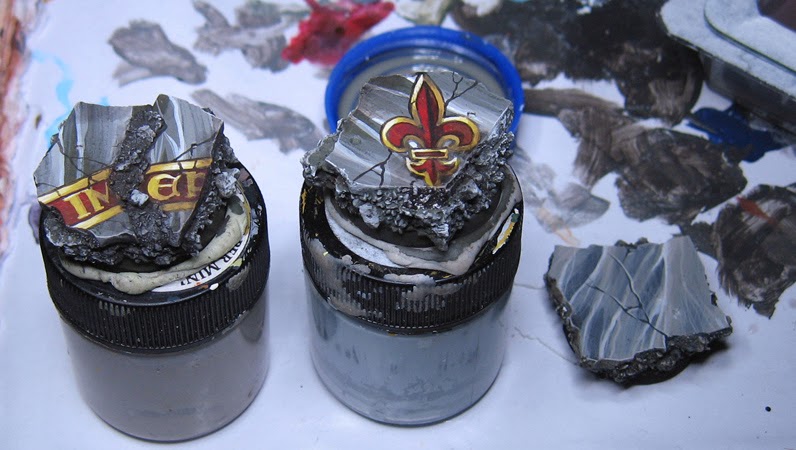 That same color is used to make some shadows on the sides of the bases as well. 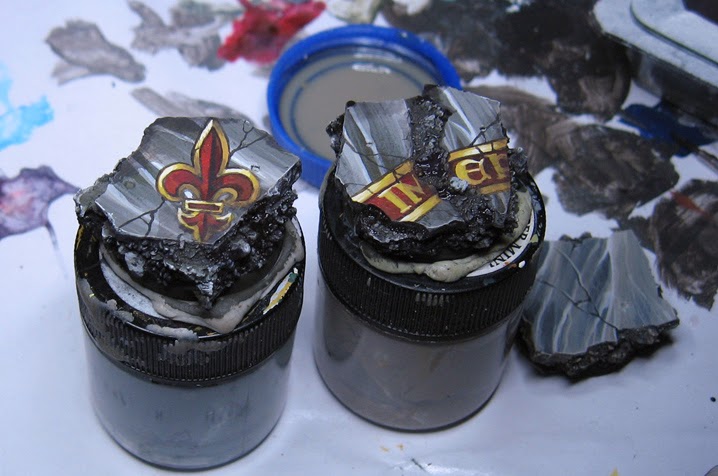 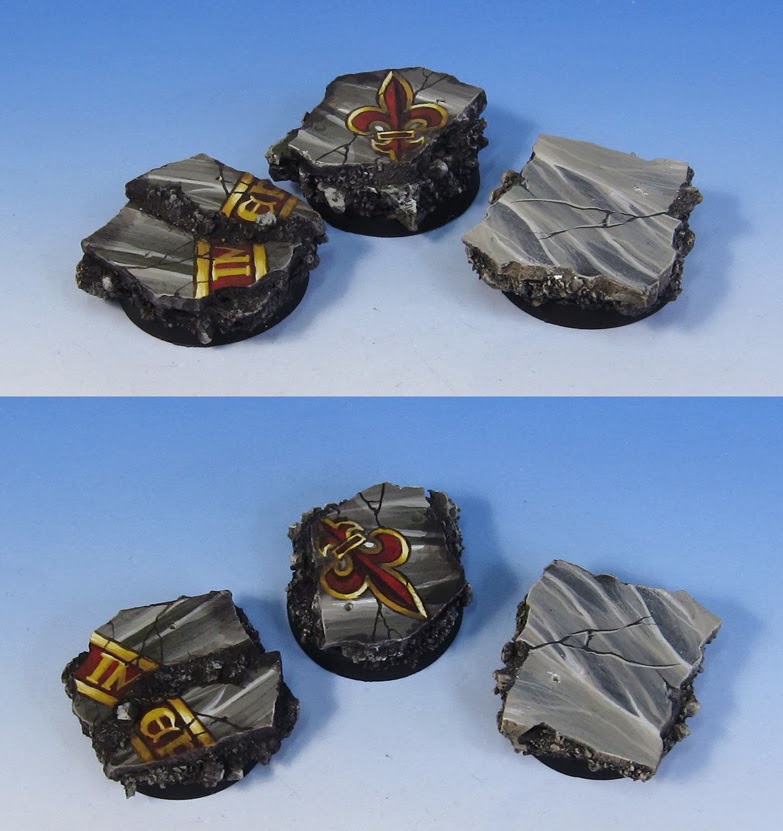 Posted by wappellious at 6:09 AM No comments: