News from the Front! 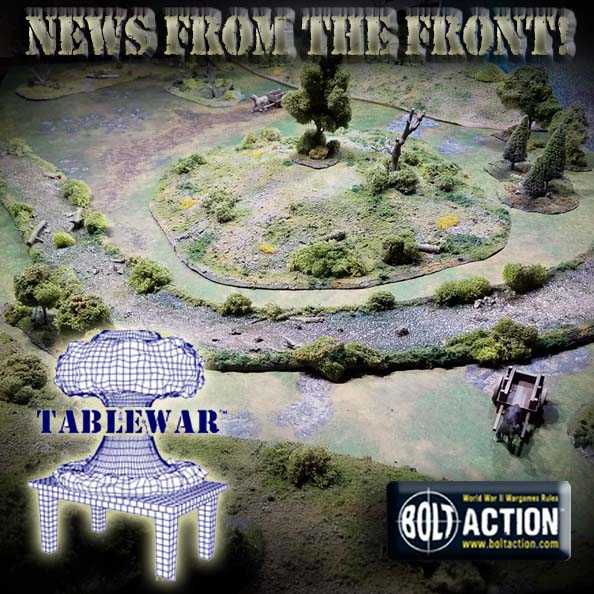 Some fantastic new battle mats have come in from the folks at TableWar, and each of them will be the setting for entire ranges of terrain.  These will generate dozens of how to articles here on the blog, where I not only show how to make the terrain pieces themselves, but also how to unify them more with something like a battle mat. 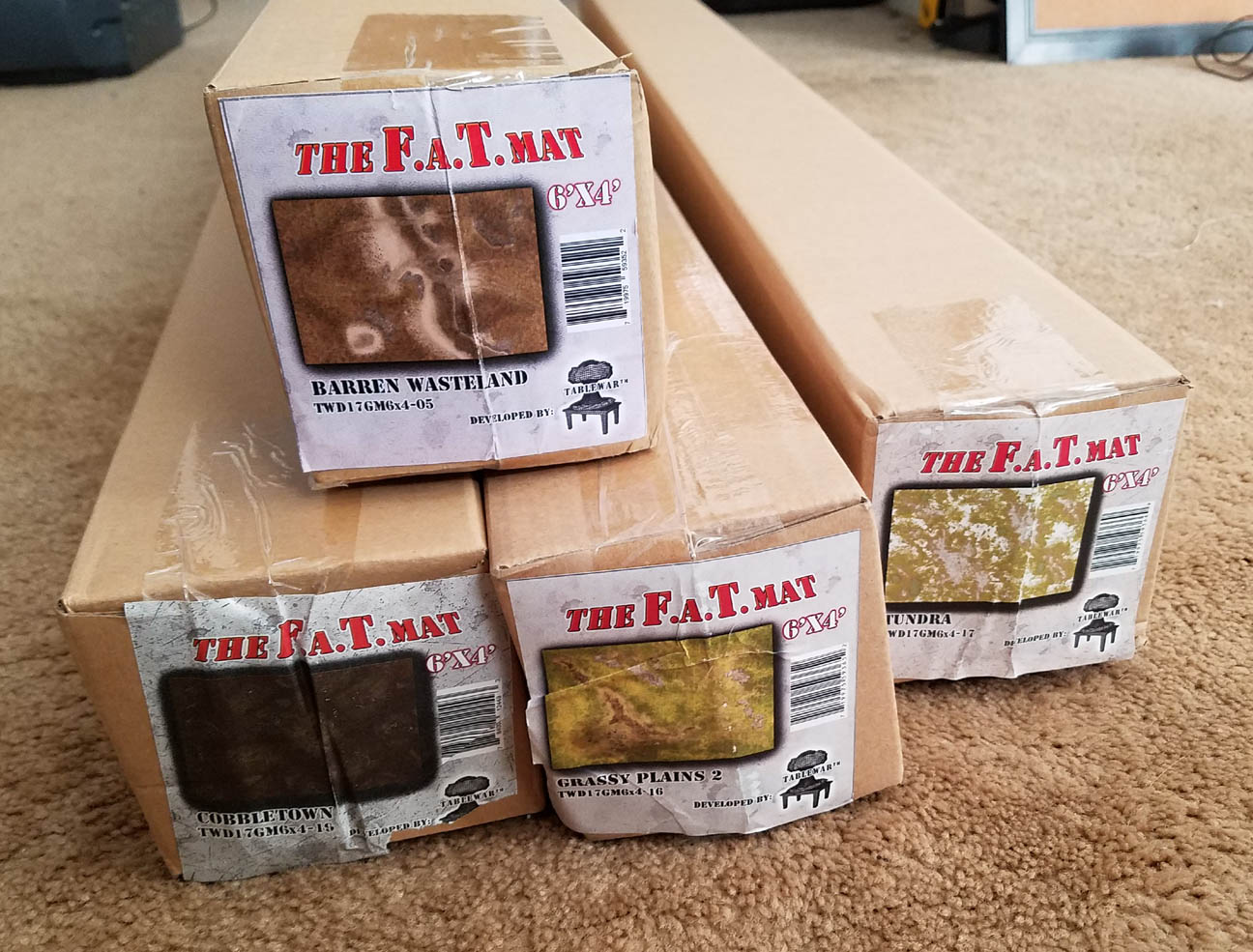 I really enjoy the carrying cases, as I will be using them very often.  They also keep the mats safe and dust free when not in use! 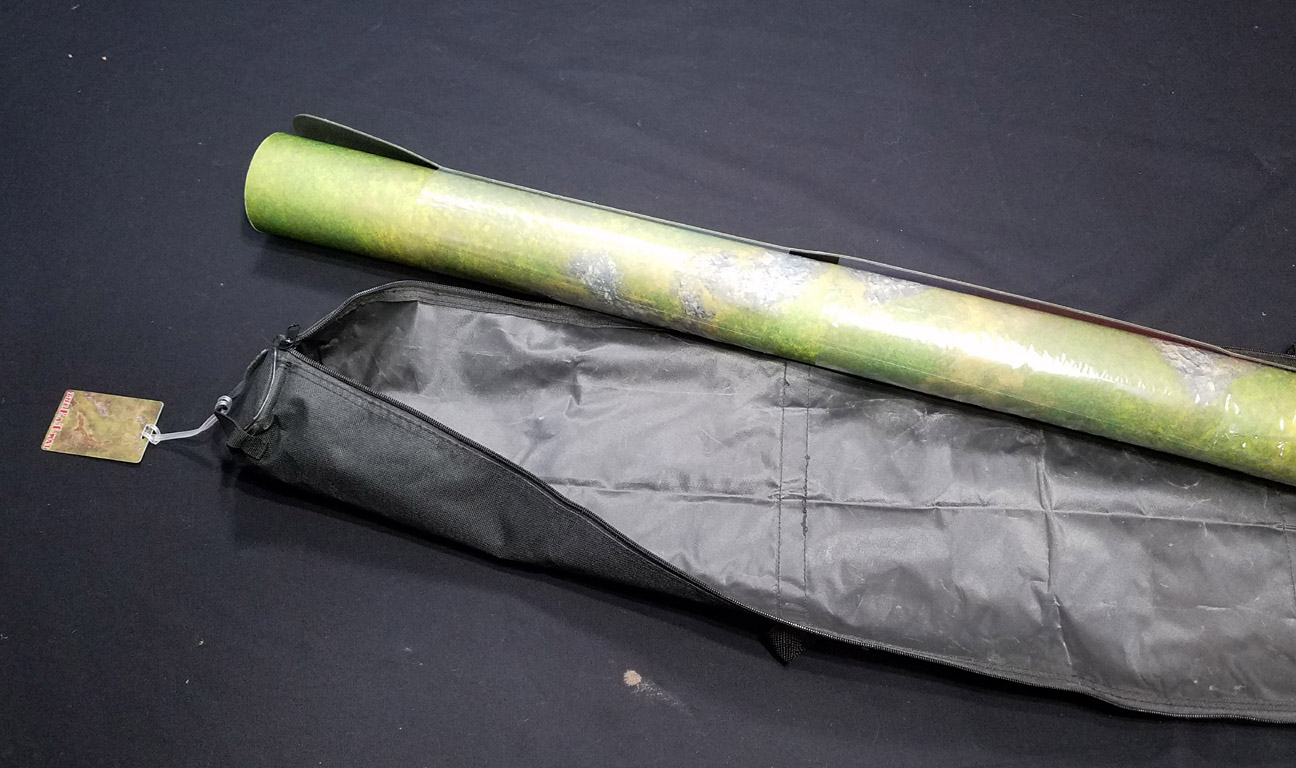 These are heavy, strong mats for sure!  I think they will stand up quite well to any kind of punishment I will inflict upon them. 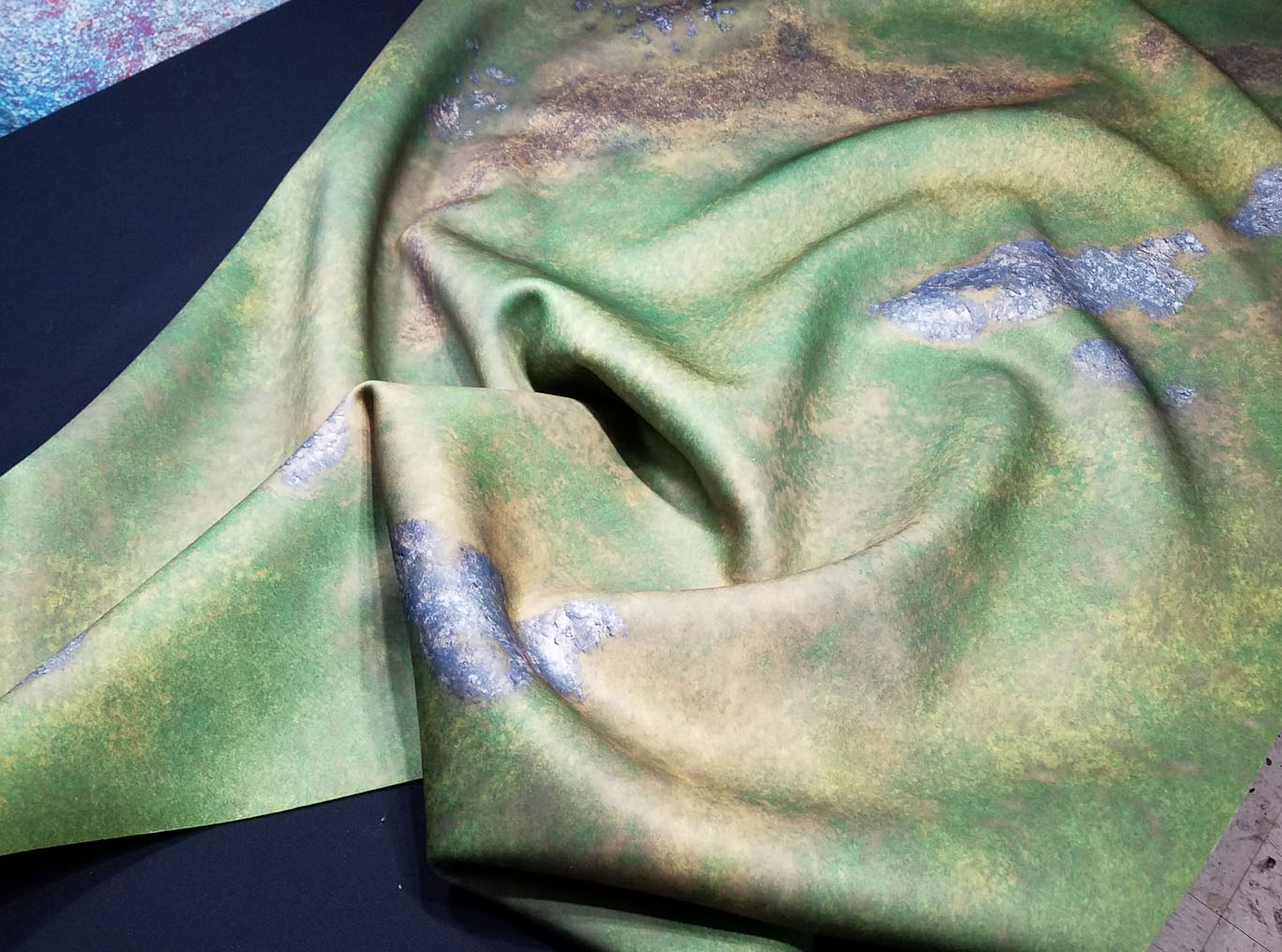 Each mat is rendered with subtle designs such as these nice designs.  The terrain pieces I have been working on were done before before I had this mat in hand, so I didn't have the opportunity to generate specific pieces to best take advantage of the innate design elements seen here.  I will try to modify them a bit so that they mesh even better.

Future terrain pieces will be made with the mats in mind, as I mentioned. 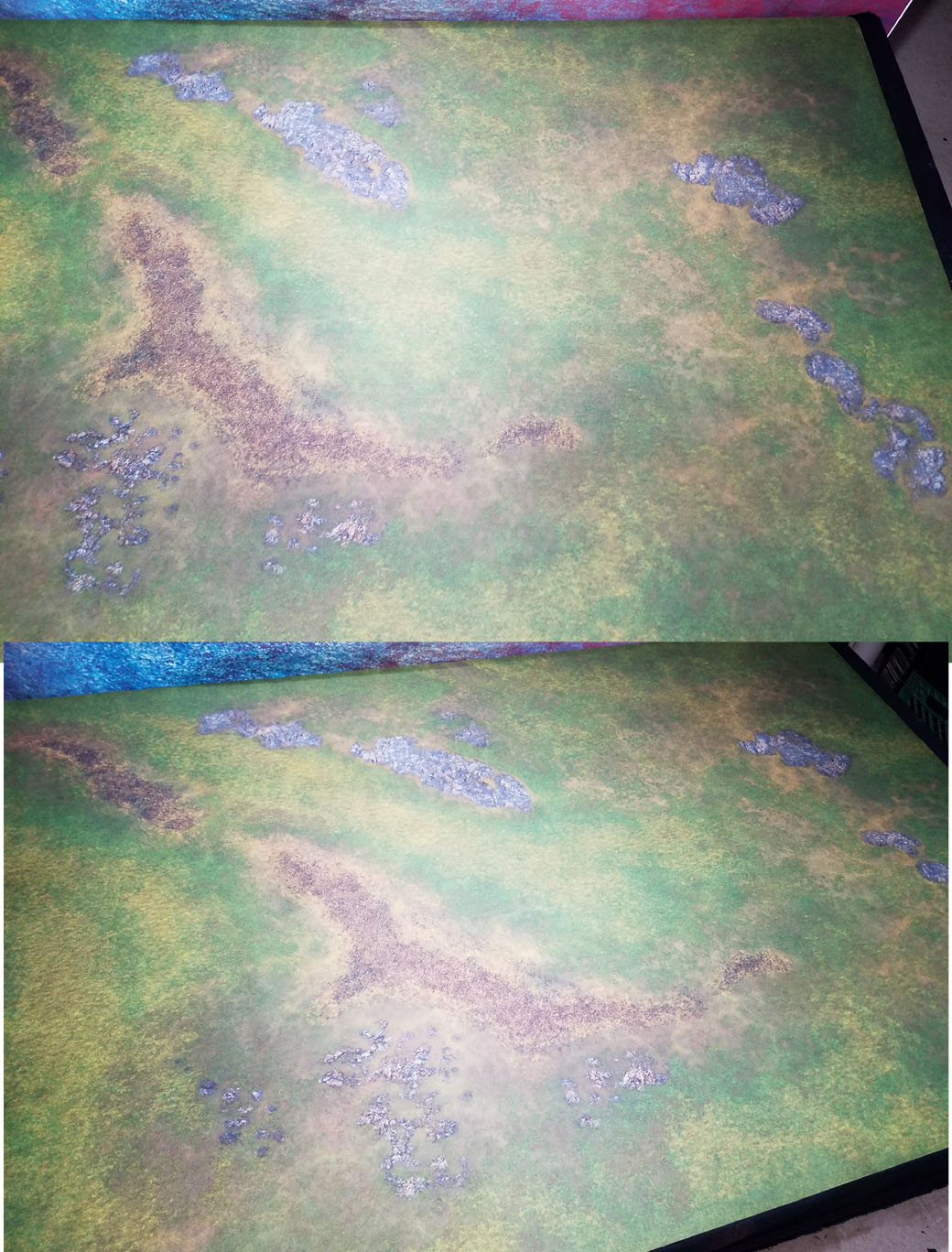 Still, I could not wait to start putting out some of my finished pieces on this mat!!  I didn't get too involved with trying to figure out which way to orient the mat itself. 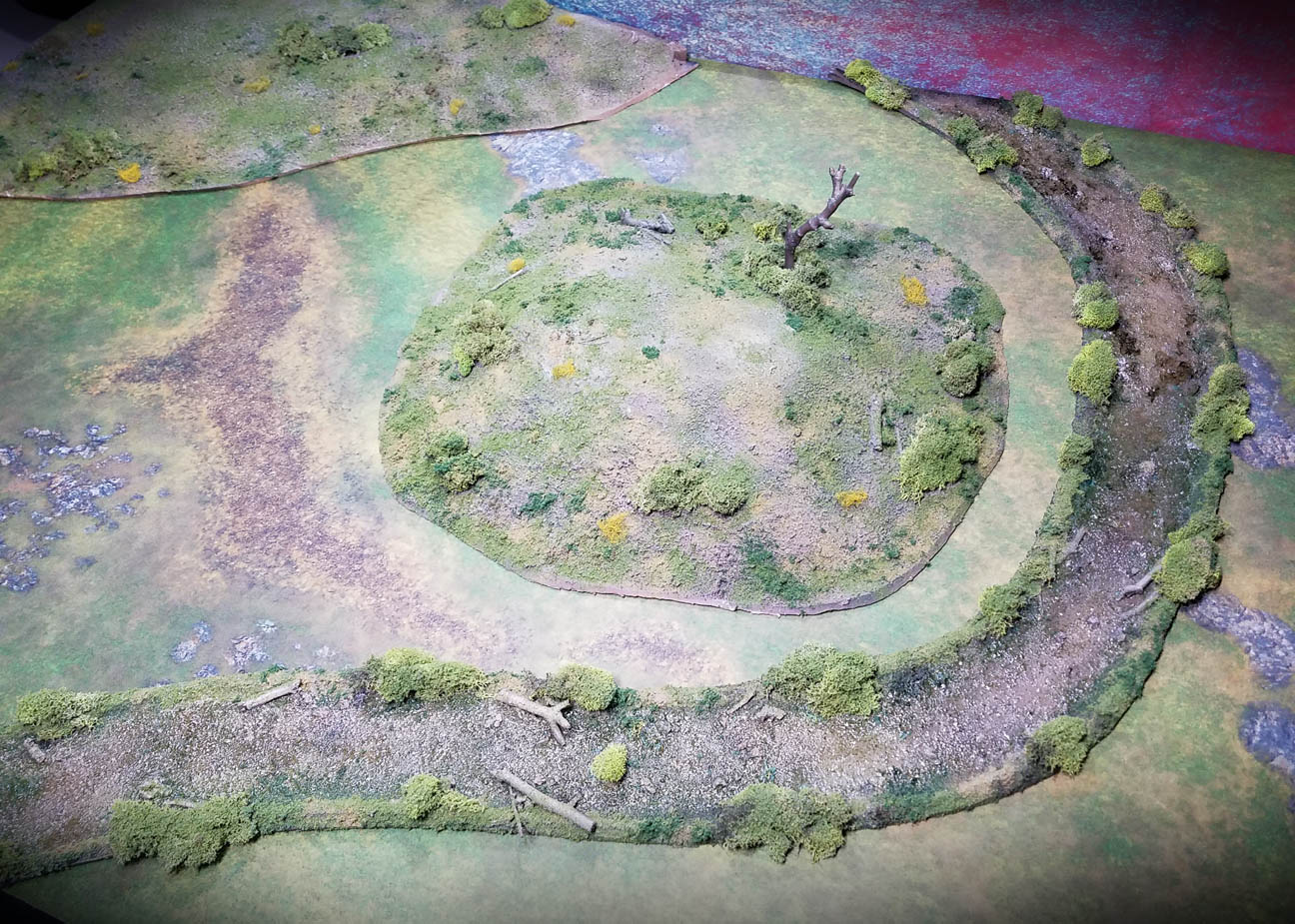 The exposed dirt/trail seemed to be a fun element to build around, so I tried to position my tree stands and central hill to take advantage of that. 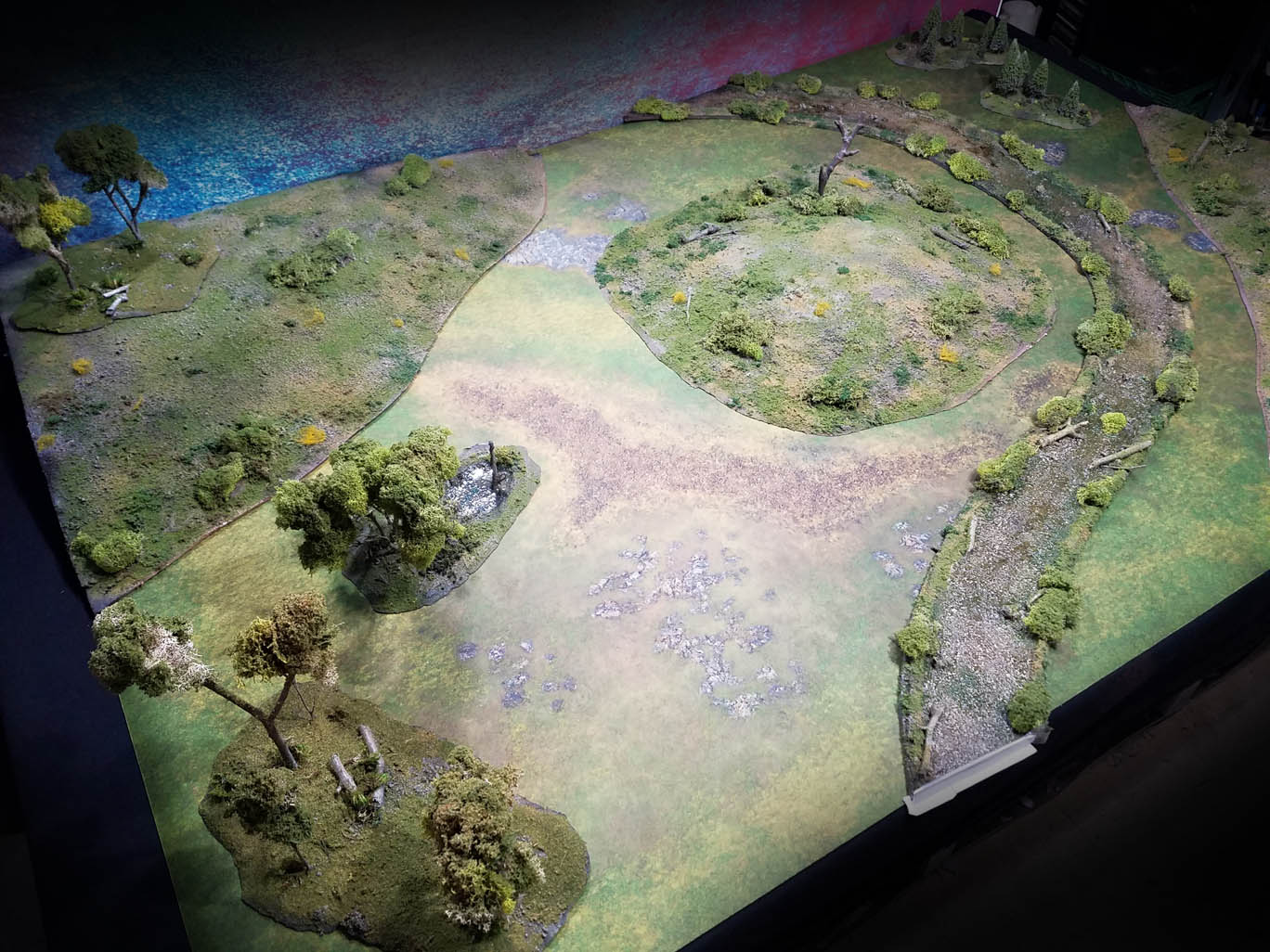 Hehe, I could not resist plopping down one of my wagons onto that trail! 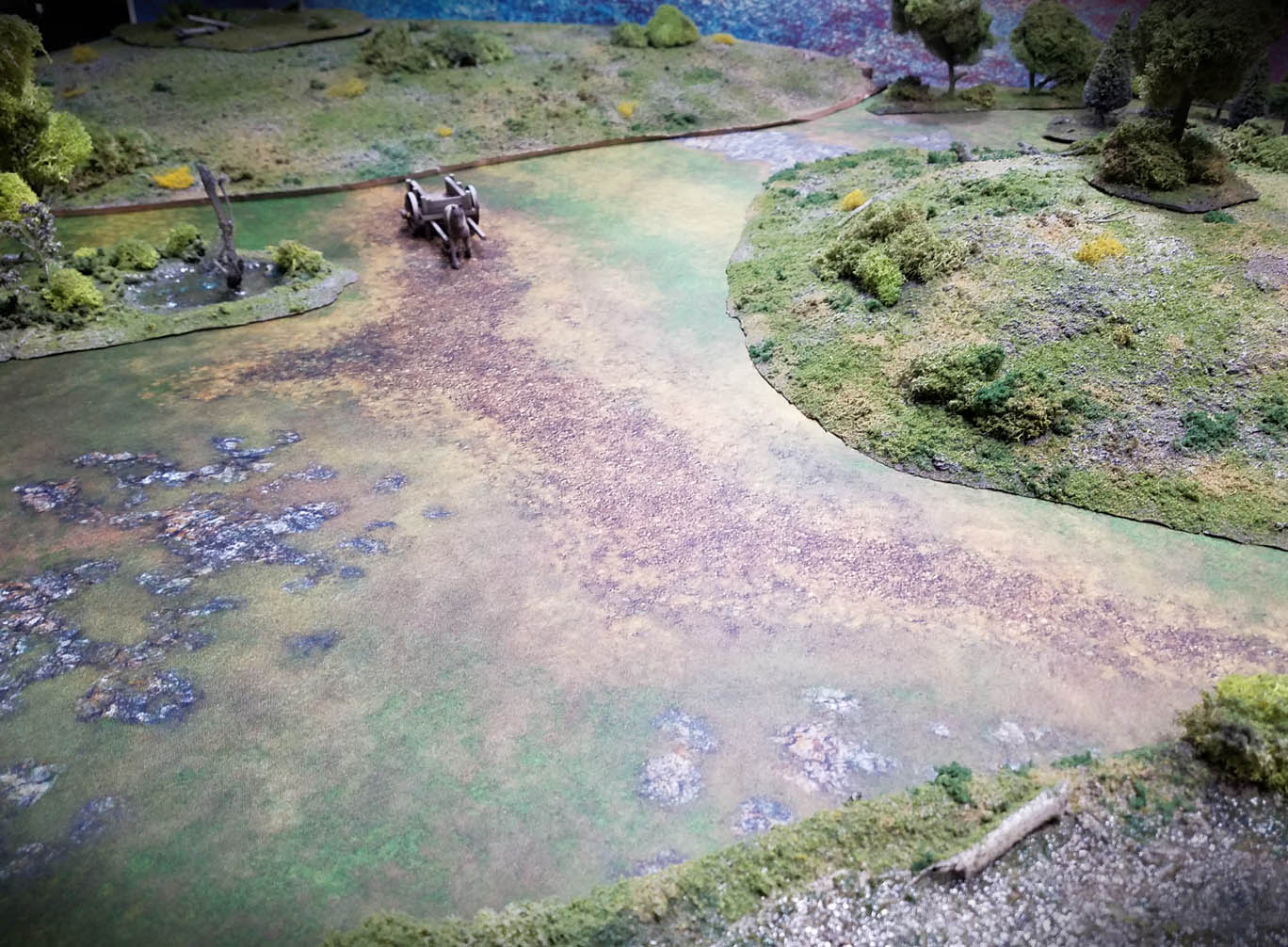 I added more and more of the smaller trees stands, trying not to cover up any interesting rocks or other graphics. 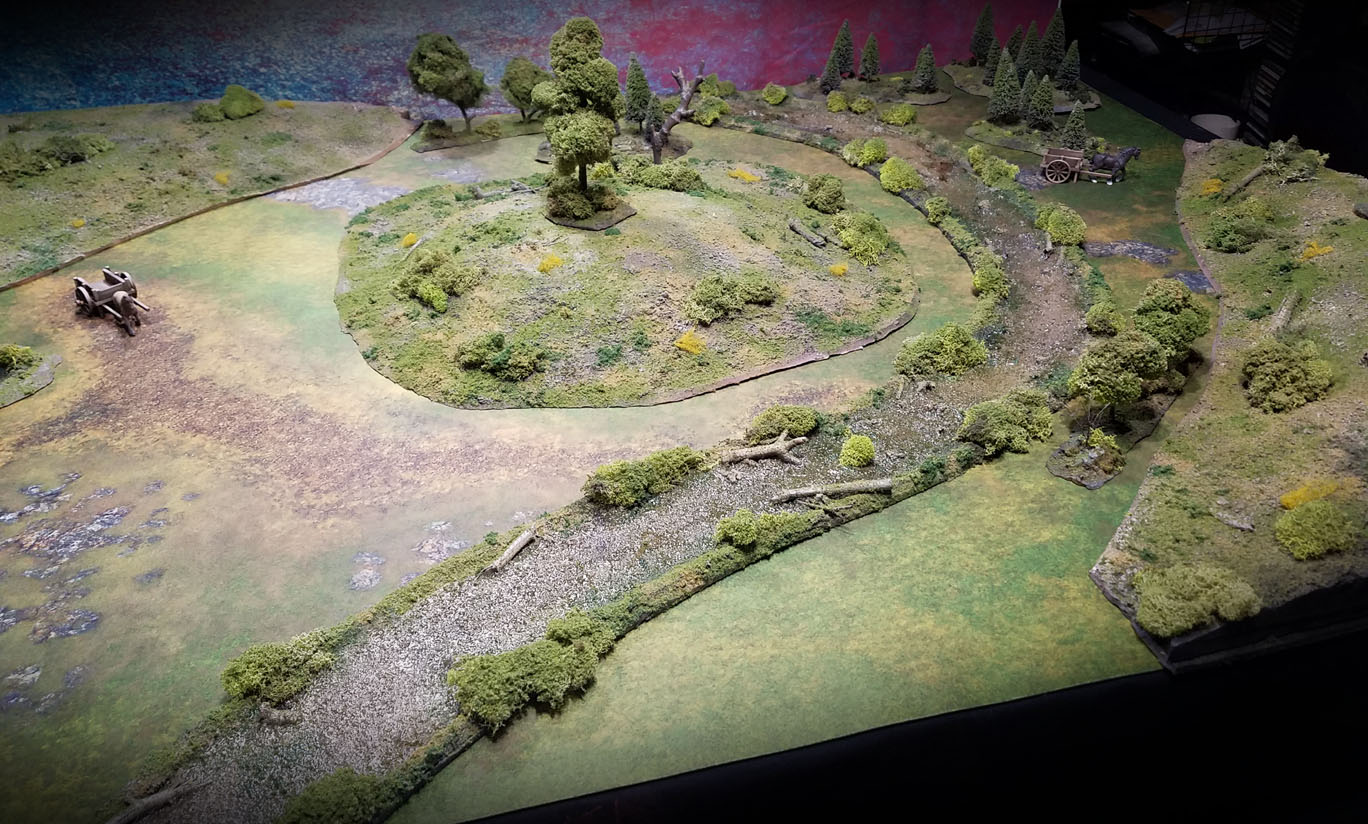 Here's the view from one side of the board.  I found a small easel which I will try to use for my painted backdrops to cover up all the nasty shelves which normally appear in these shots!  I already have something figured out for the long table sides. 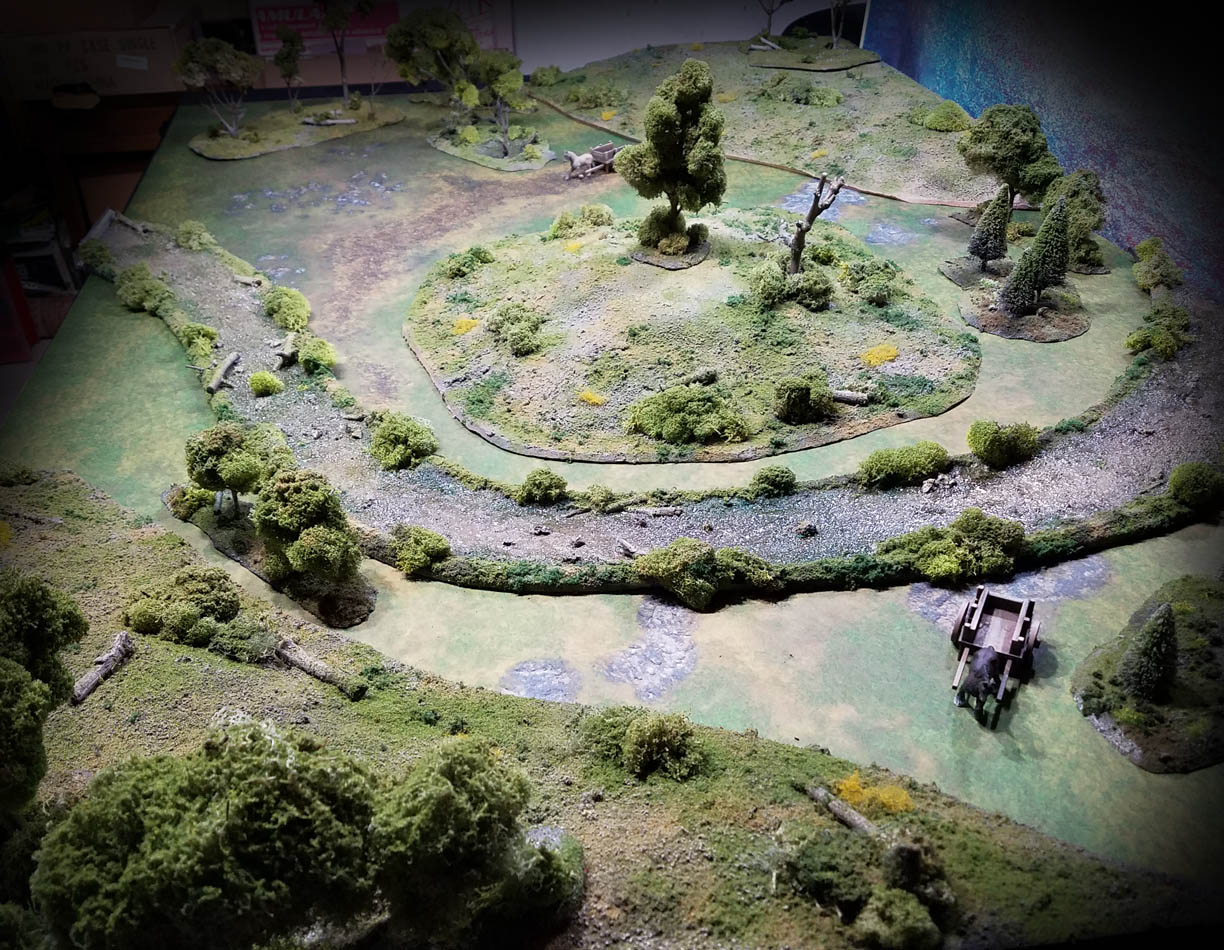 Now from the opposite end of the board.  After seeing the terrain pieces on the nasty, dirty tablecloth, I am very pleased to see all that hard work resting on such a great mat. 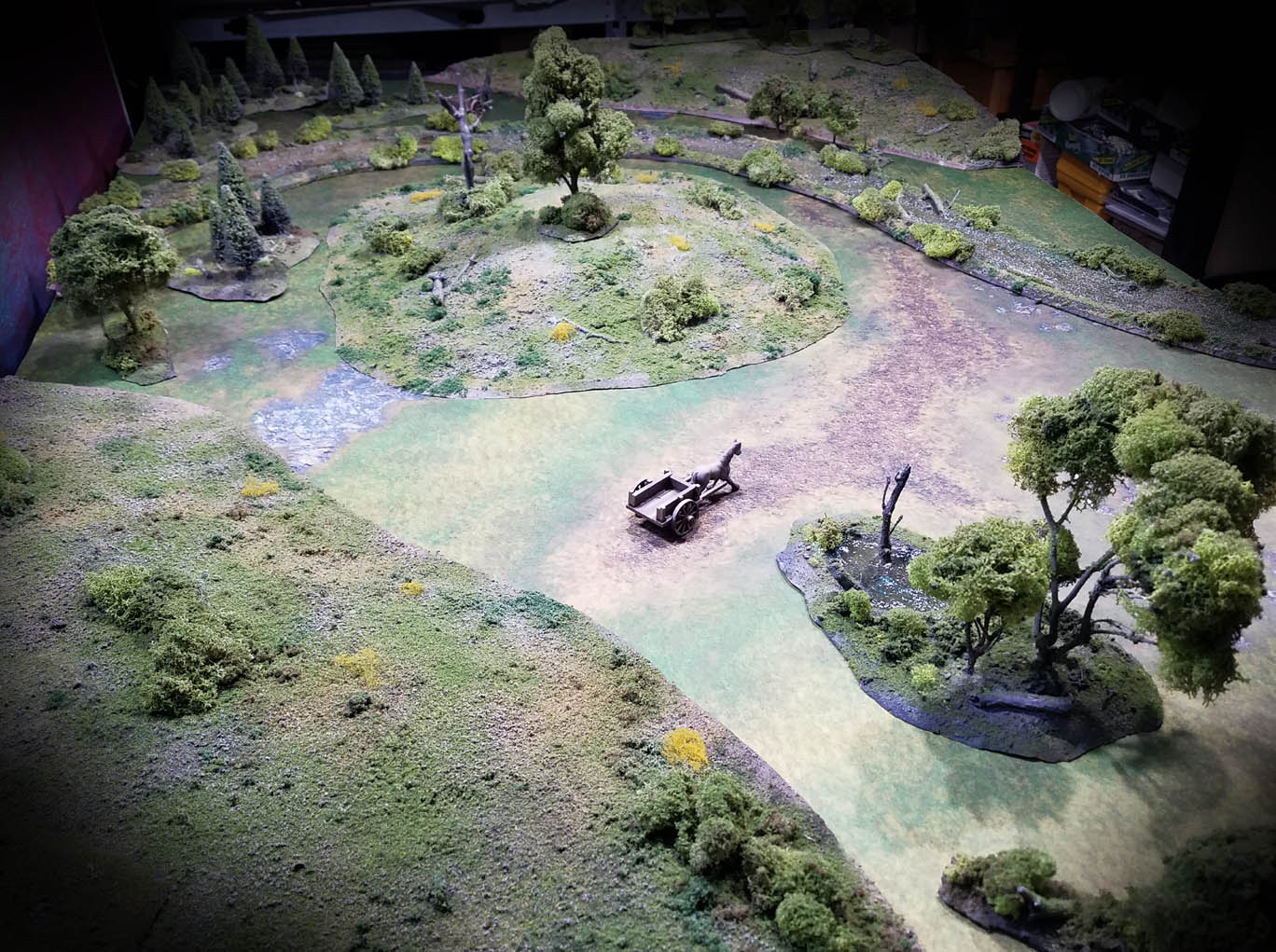 I will also be adjusting my lights a bit.  Believe it or not, I have too much of it right now!  I have a host of 60-100 Watt LED bulbs which had been secured for an older camera.  That camera was horrible in anything but the brightest lighting, but the new version requires far less. 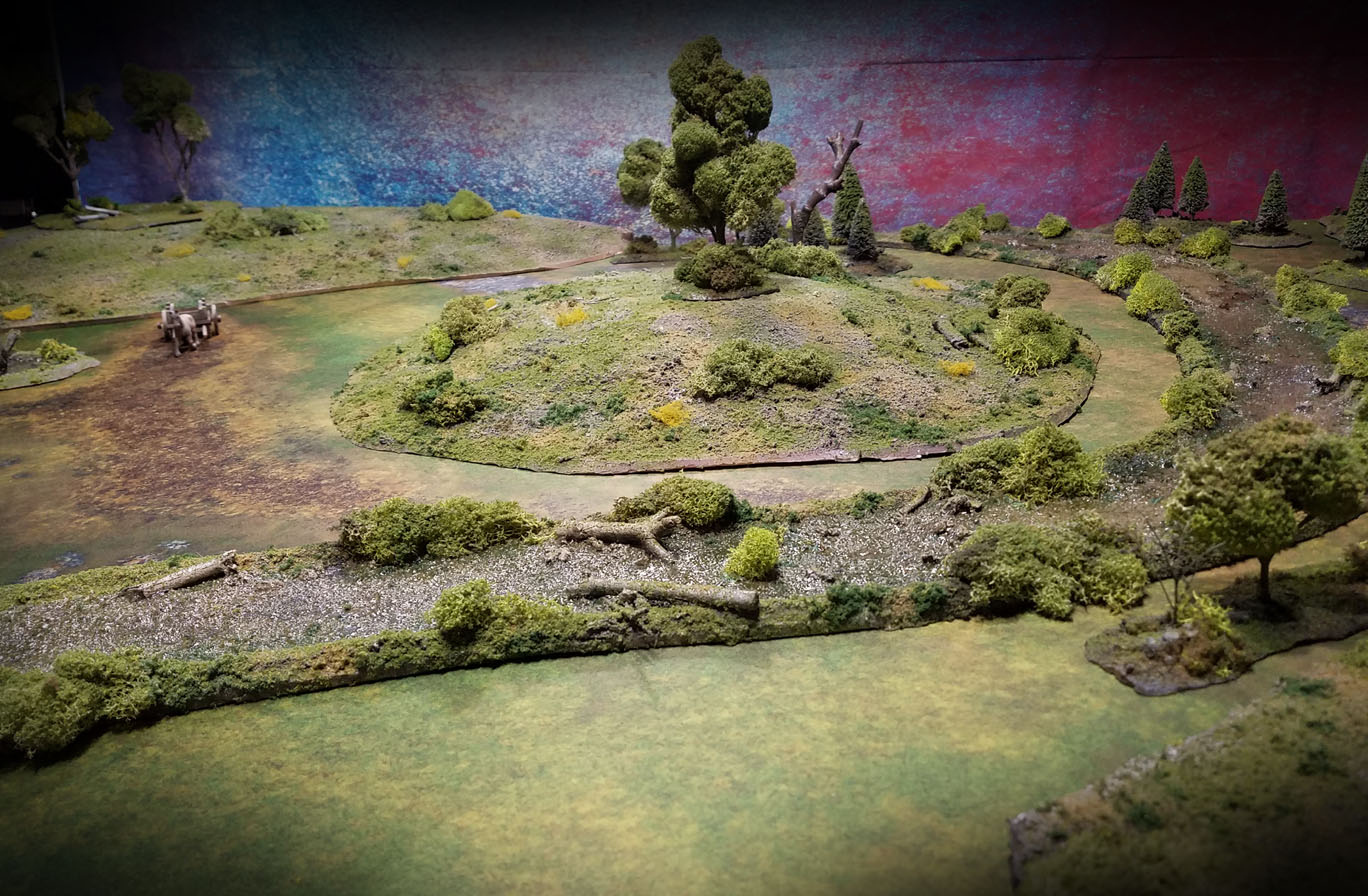 That is probably something else that I will get into when I move forward on the future terrain articles.
While I thought that my large pieces would cover up too much of the mat, this view made me realize that they work quite well, and there is still plenty of mat to see.  I will try many other configurations to see how that looks. 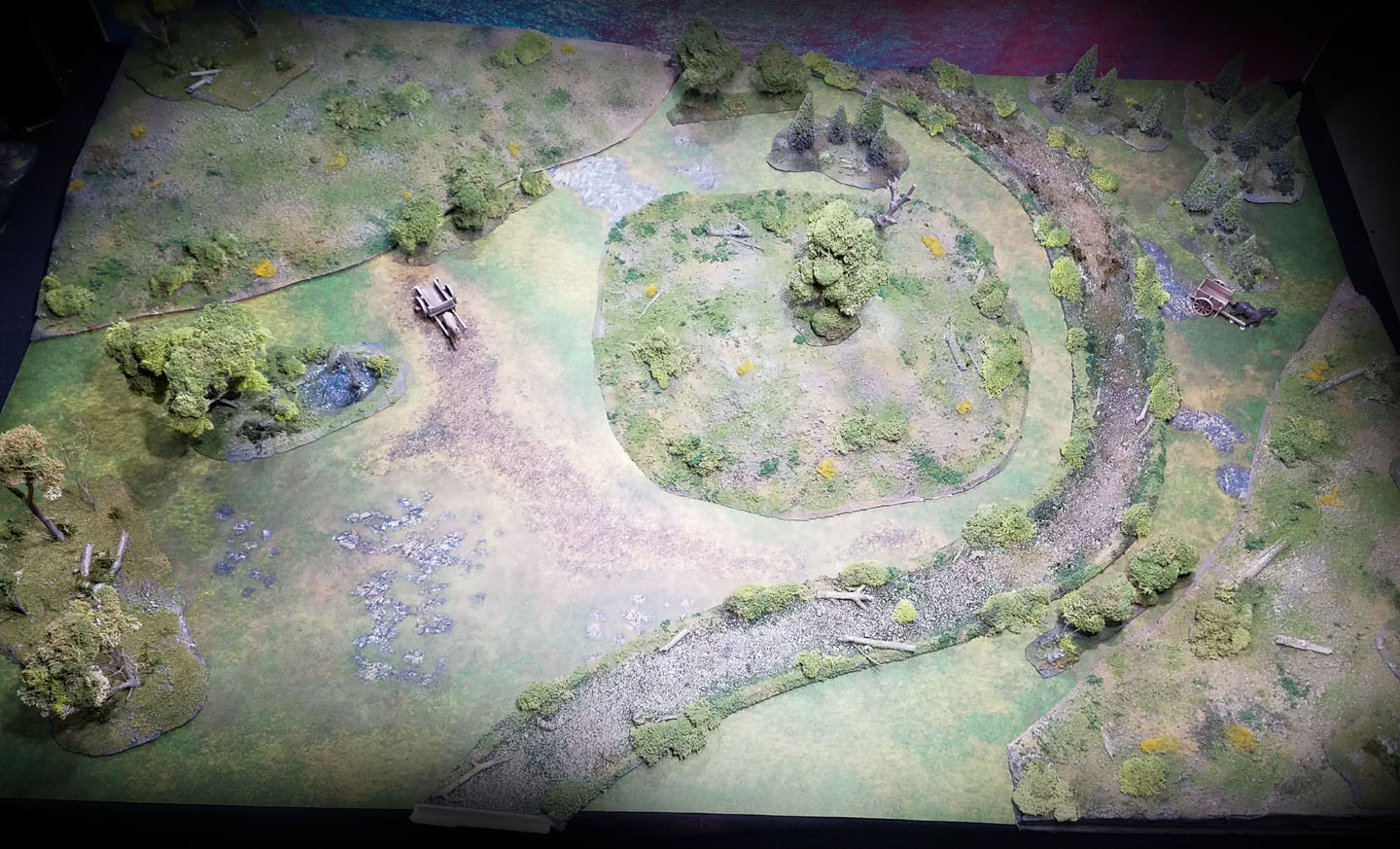 I can even add other smaller pieces of scatter terrain, such as fences, small bushes, more animals, etc.  Farmland is another aspect of terrain building that I have experimented with, but you have not seen. 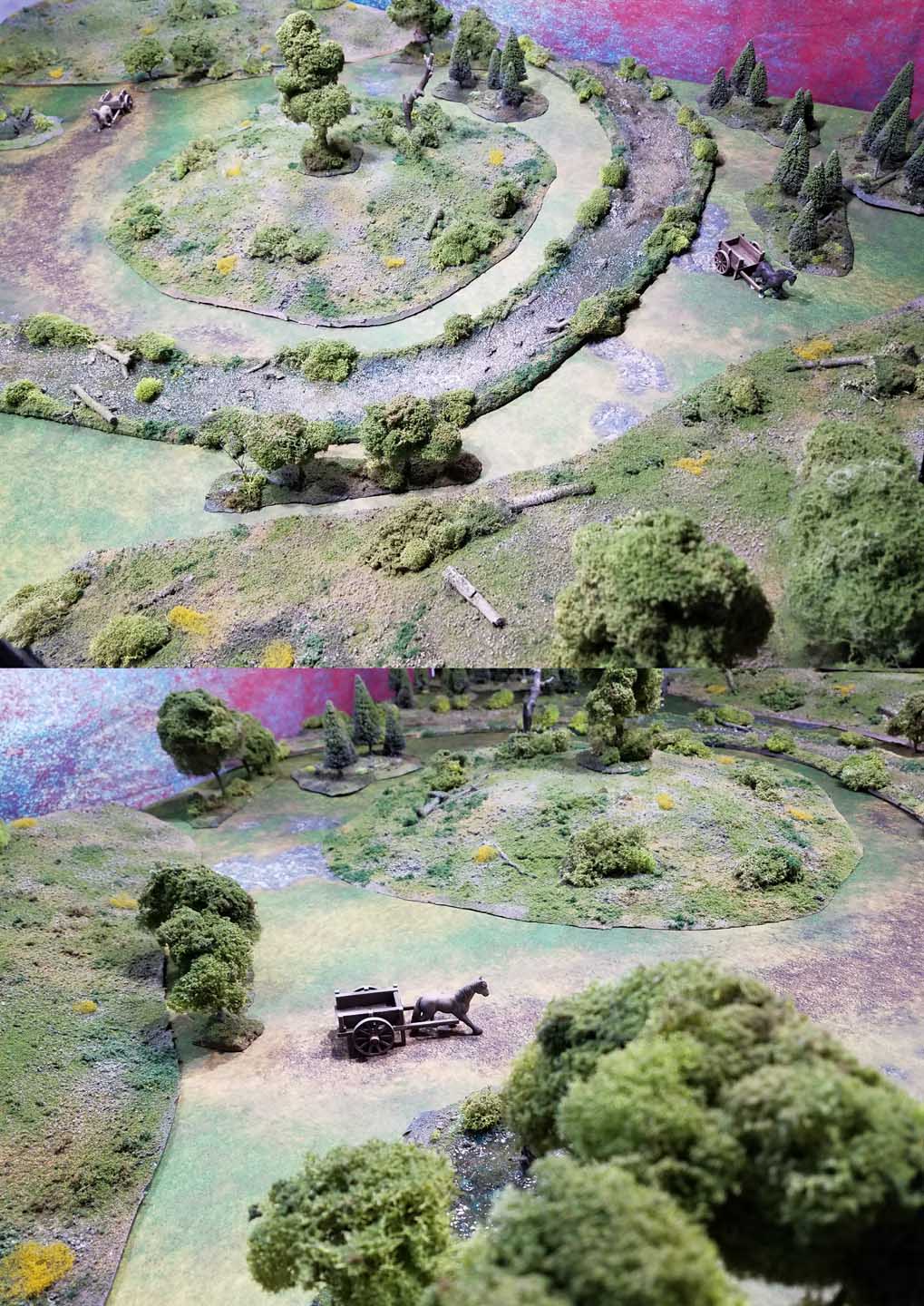 One final view... I think I may just have to do that inaugural battle report now.  As always, stay tuned! 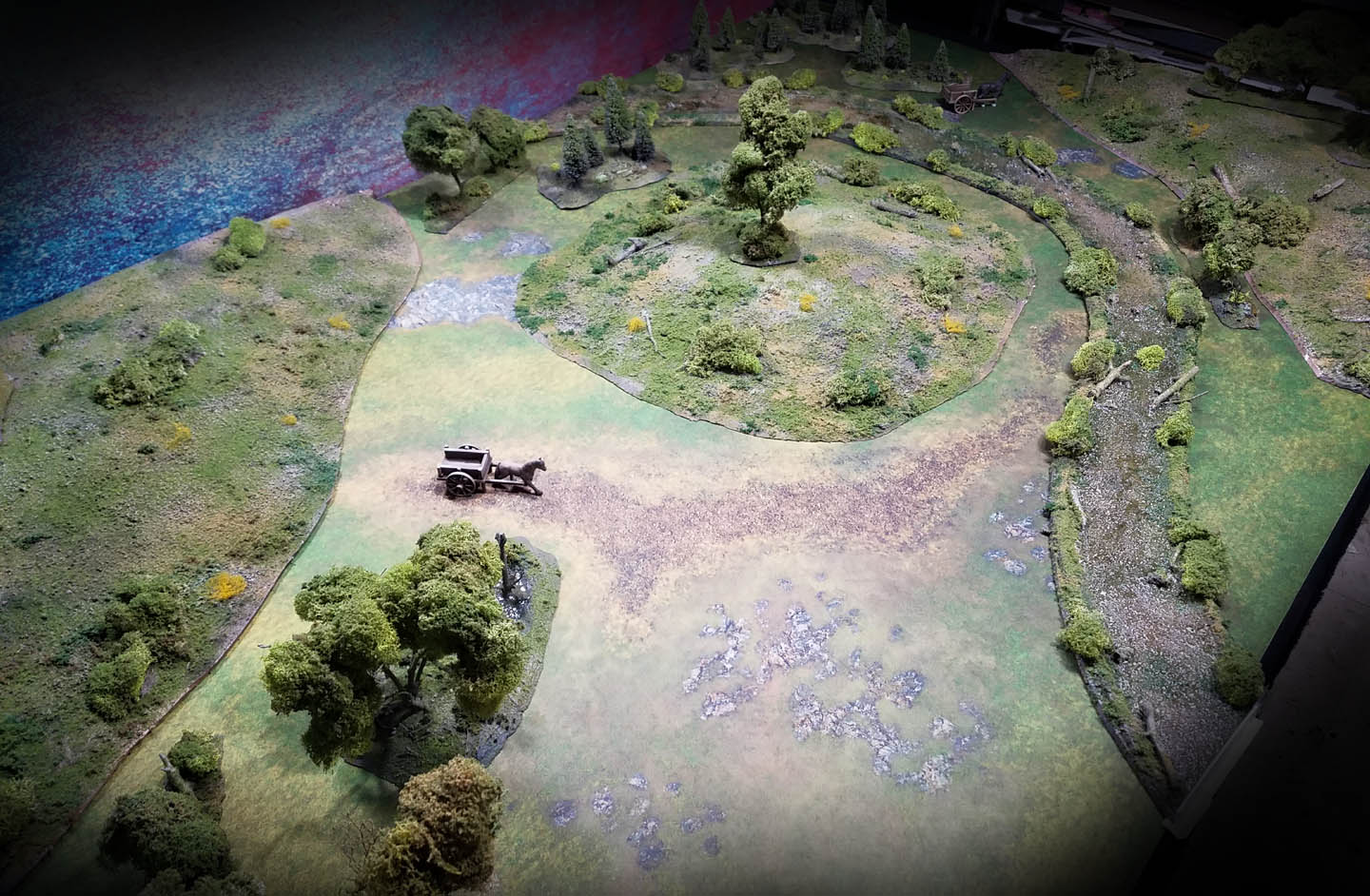 Posted by wappellious at 9:54 AM 2 comments: