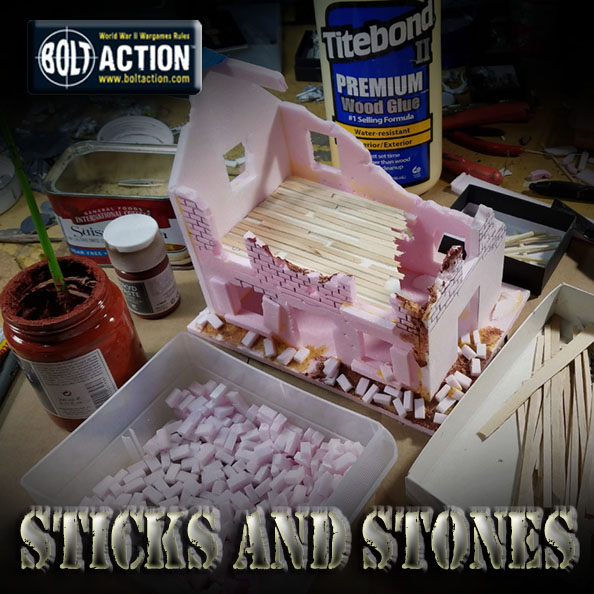 Now that we are starting to play Bolt Action in multiple locations, the need has arisen for more terrain pieces... and more terrain pieces!  Time constraints are even tighter, so getting the maximum results from the least amount of time and expenditure are key.

I needed to create a second set of village style buildings like the ones seen in this image.

They were multi story buildings that were partially ruined, with removable second floors. 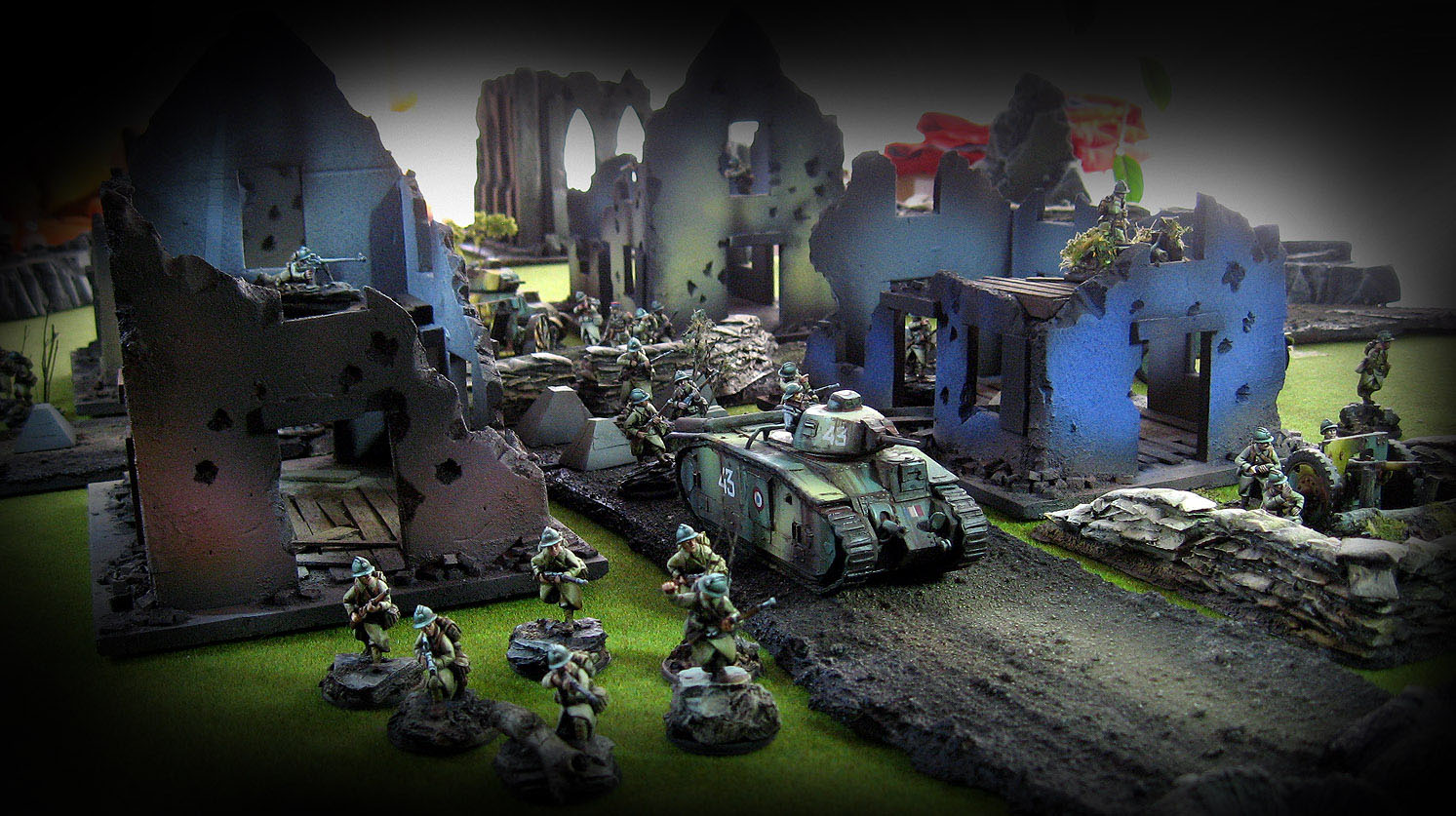 You can see how those were made in the original how to post here:

I still had the templates, but I wanted to get some more depth of texture in the new batch.  Since I made these, I had discovered a few new materials, and I wanted to give those a try. 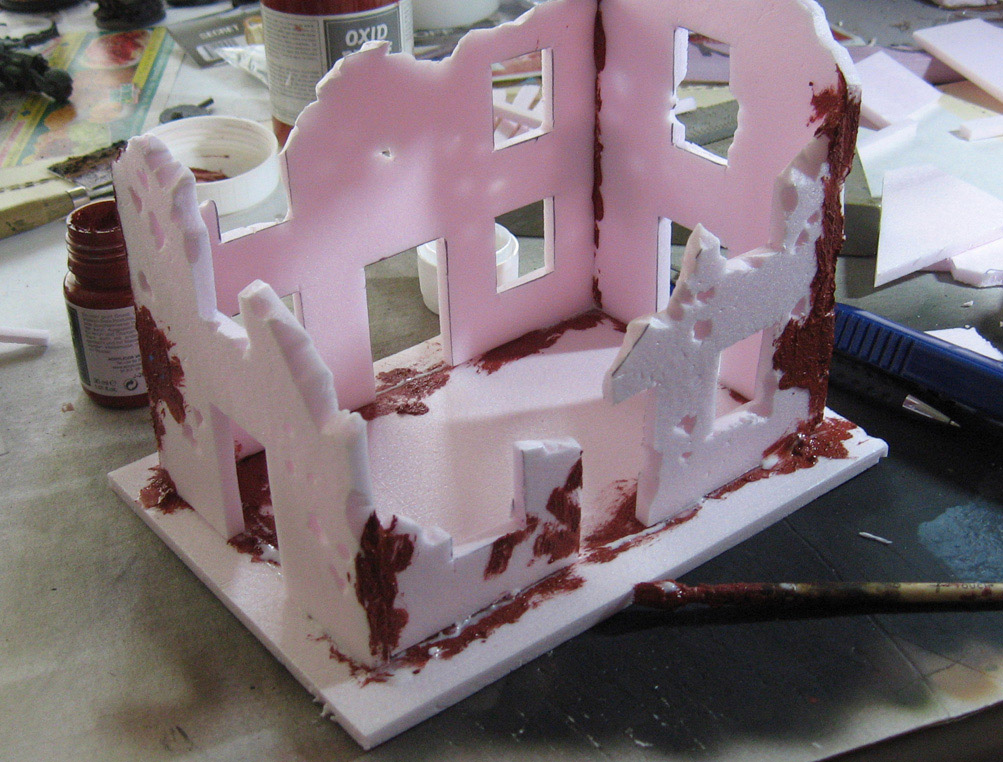 In this new series of posts, I want to focus on those new elements. You can refer back to the first instructional post on the basic materials used to block out the walls of these structures.

In this new attempt, I had some new wooden craft sticks, a new and faster way to mass produce bricks, and some white stucco. 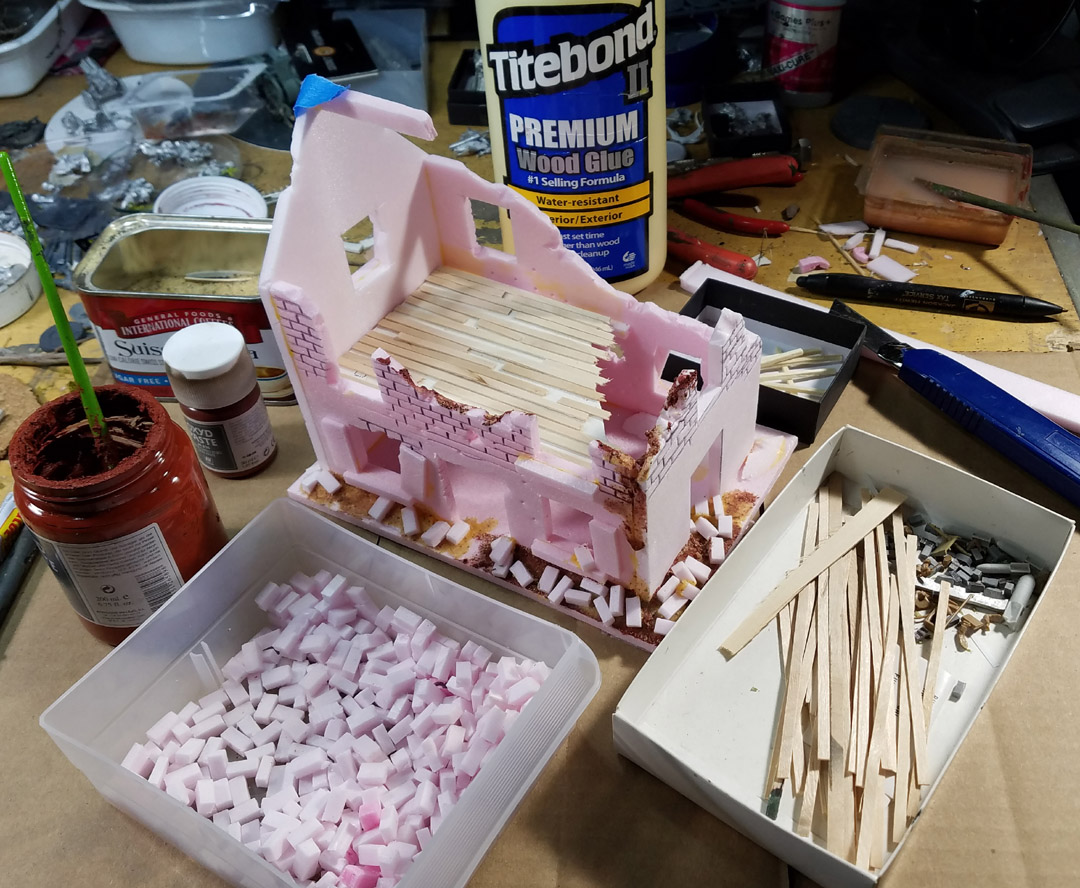 Just as I did in the first batch of buildings, I used coffee stir sticks for flooring.  You can see the outline of the support structure for the second floor. 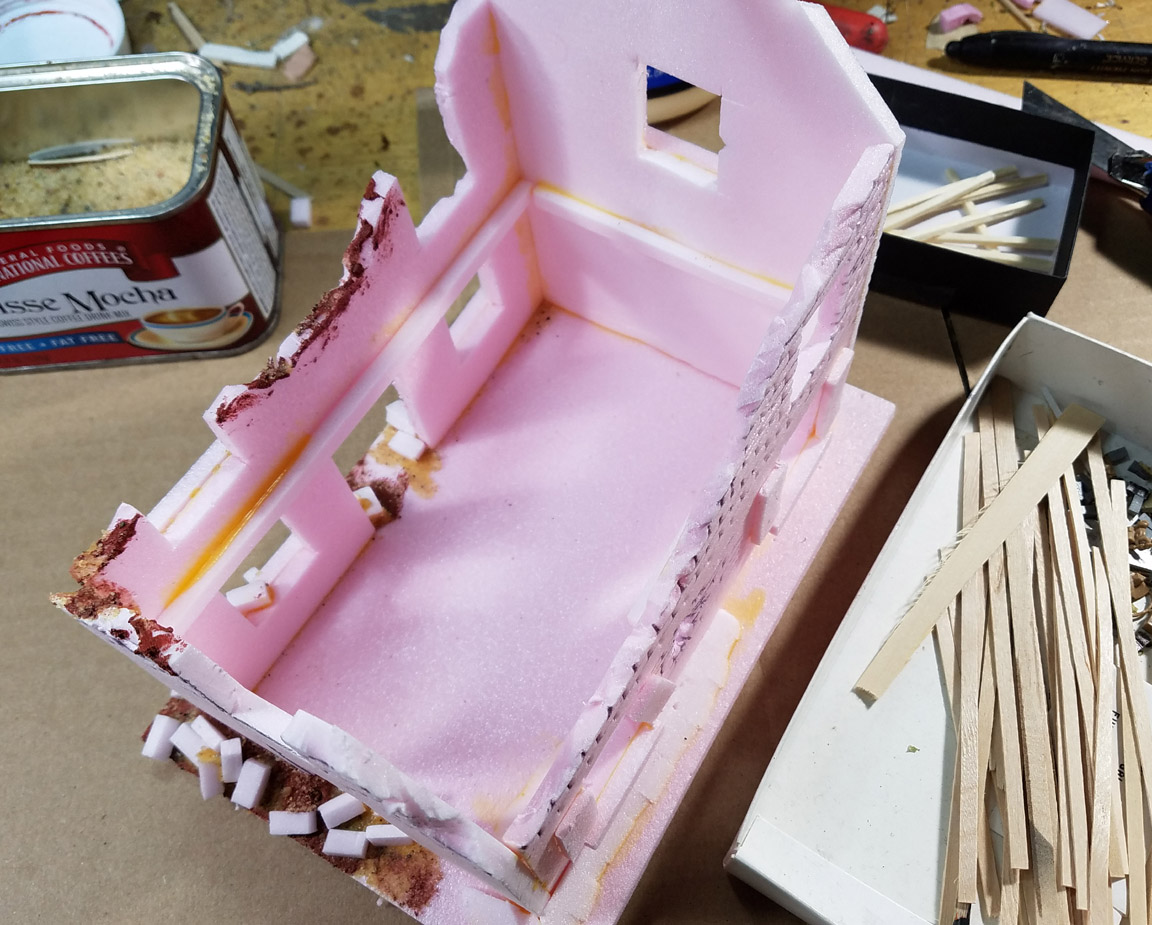 Wood glue is placed on the floor, while Oxide Paste is put on the areas where the bricks are going to be piled up.  To conserve on the Oxide Paste, I cut a few small angled pieces of the pink foam in the corners for extra height.

Those bits came from hills and tree stands which I was making at the same time. 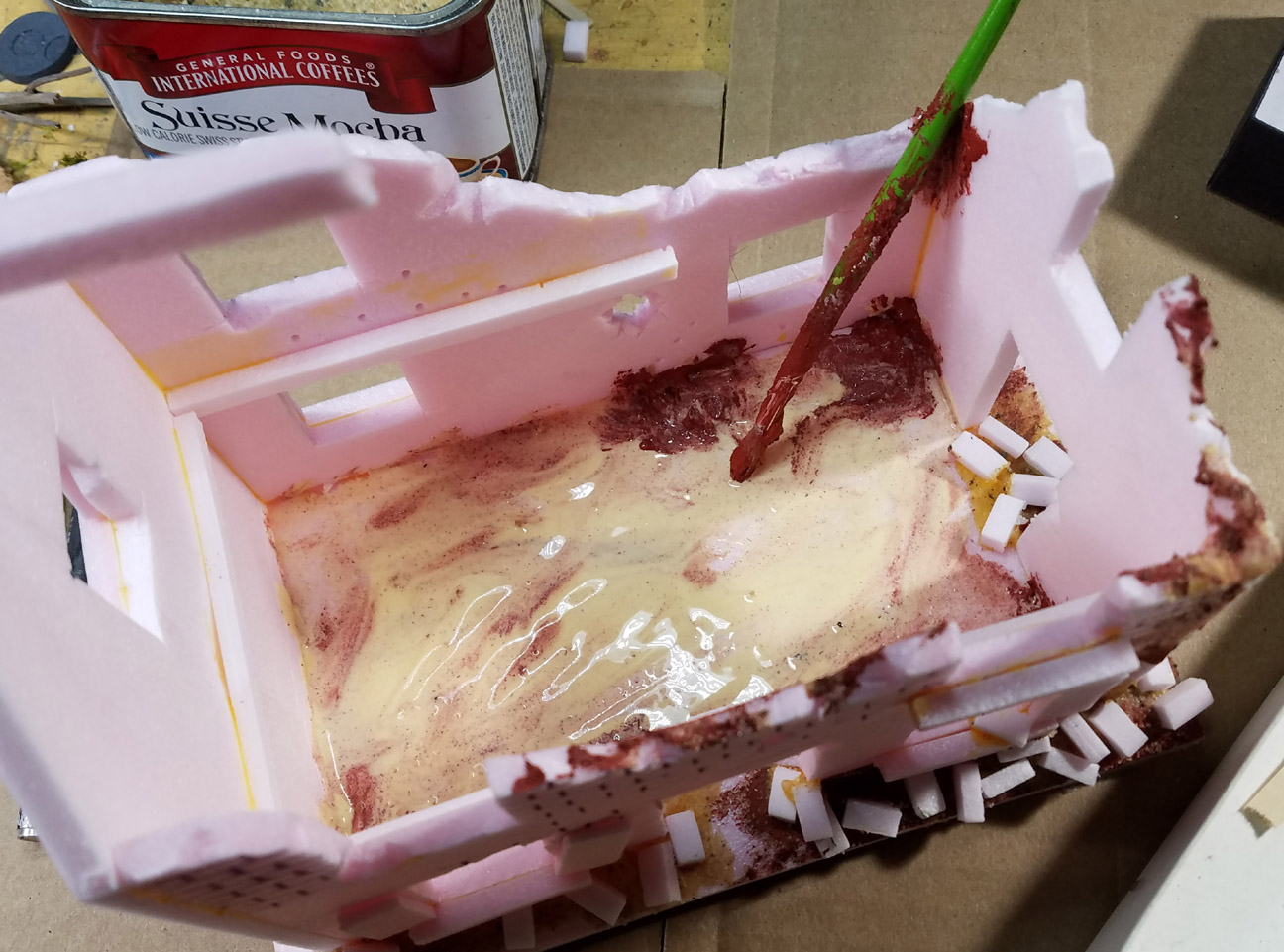 The boards are in place, some of which are bent or out of place to show that interior damage.  I have a few types of medium and fine ballast to place in and around it. 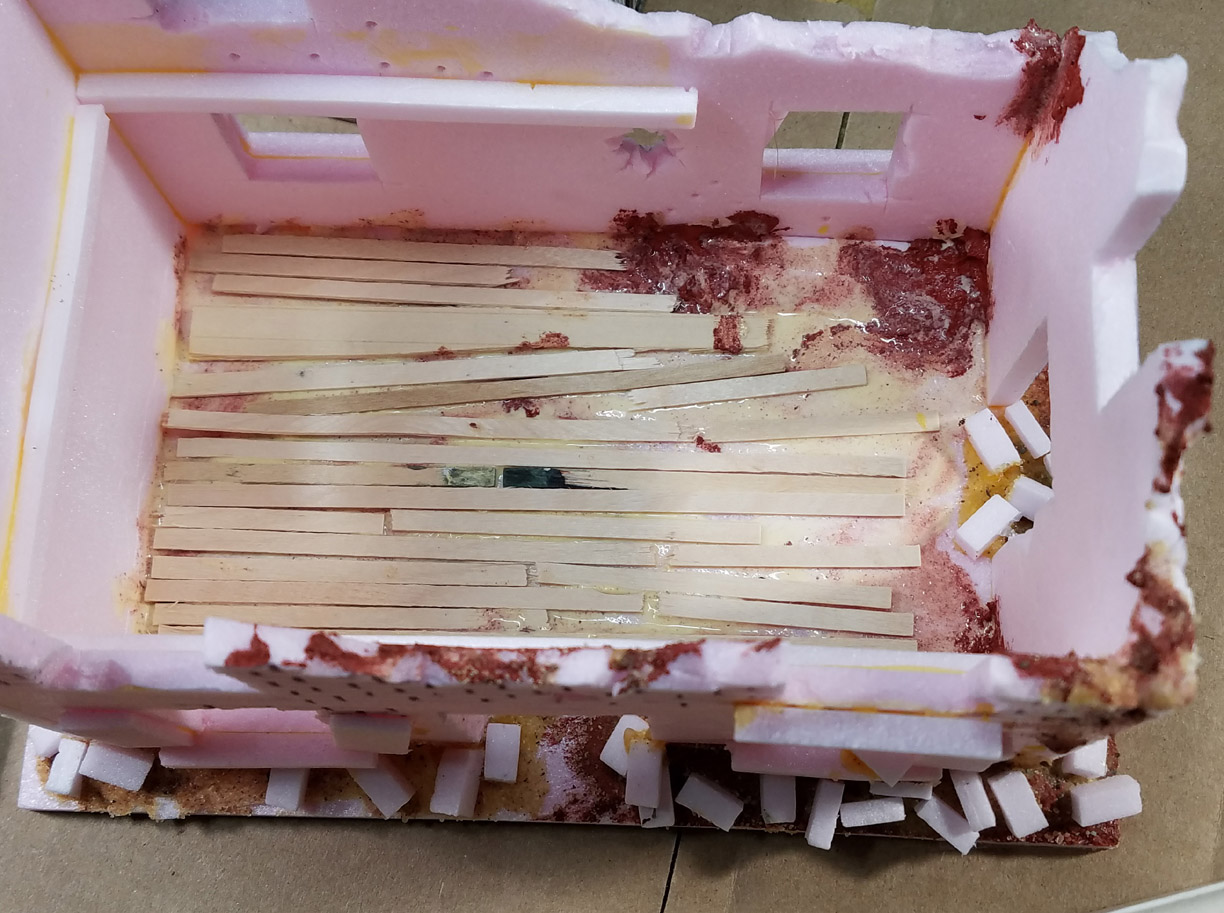 The bricks (also made of the same pink foam) can be dropped into the Oxide Paste.  To get more interesting piles, I had some wood glue off to the side where I could dip the bricks into it and put them on top of the original pile.

If you have more time, you can make smaller bricks, or even break them!  It is very easy with the pink foam.  All I had to do to make the bricks was to cut some thin strips, and then chop off the individual bricks as if I were cutting carrots. 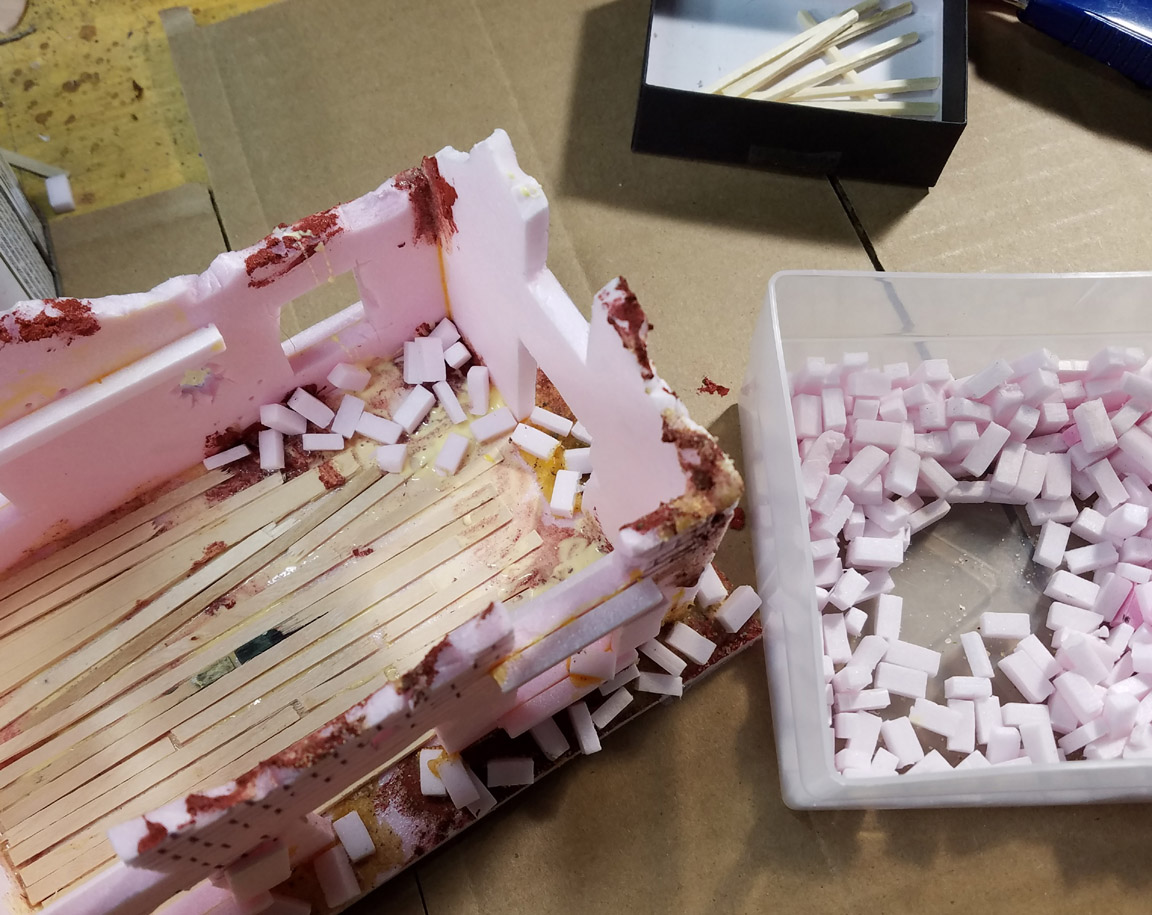 A combination of various ballasts was applied to fill in the gaps and substitute for crushed bricks and other debris. 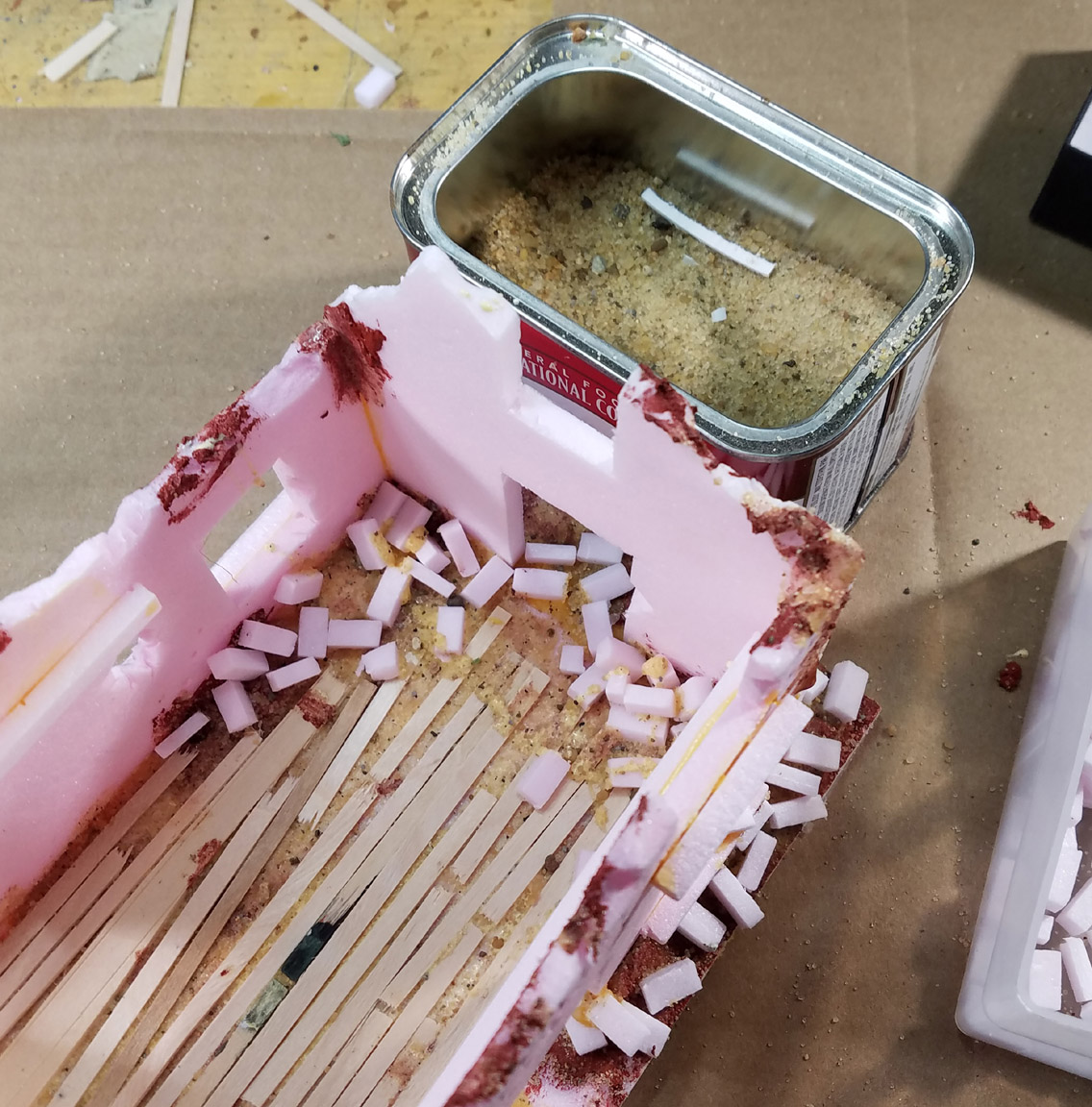 There are several reasons why I love the thin pink foam instead of the usual foam core.  First, you can paint the foam and subject it to all kinds of moisture and it will never warp.  Foam core has paper on each side, and that will indeed warp when painted.

Second, as you can tell by the brick pattern on the walls, it is very easy to put in cracks and a number of textures on the surface.  This is that extra layer of texture that I wanted.  Basically, I wanted to see if I could create an "exposed brick" texture around all the shattered areas of the walls.

You can also see those "risers" of extra pink foam under the Oxide Paste.  Once again, this was a time and money saving measure. 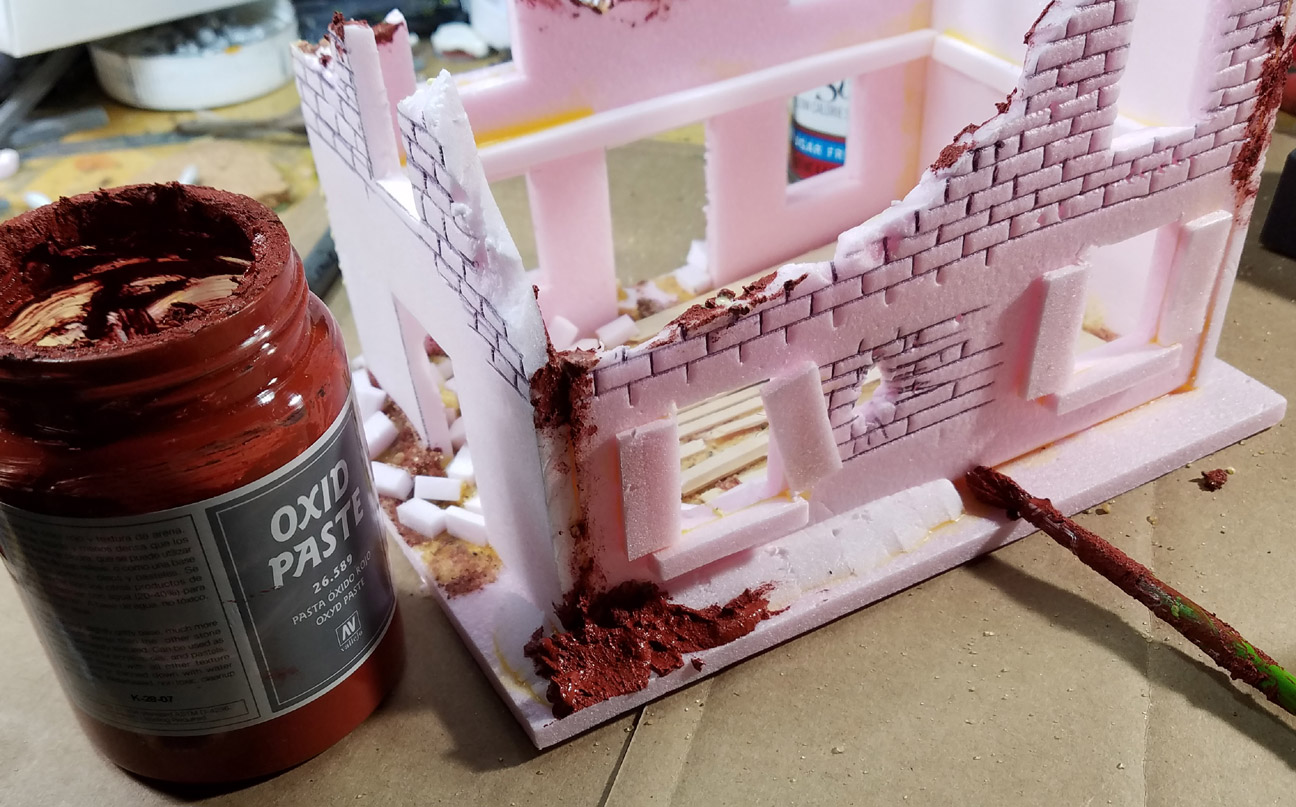 Just as I did in the interior, I made piles of bricks, focusing most on the sections of walls which had broken down the most.  If I had more time, I would have made them a little smaller and made more broken bricks... but as always, time was at a premium! 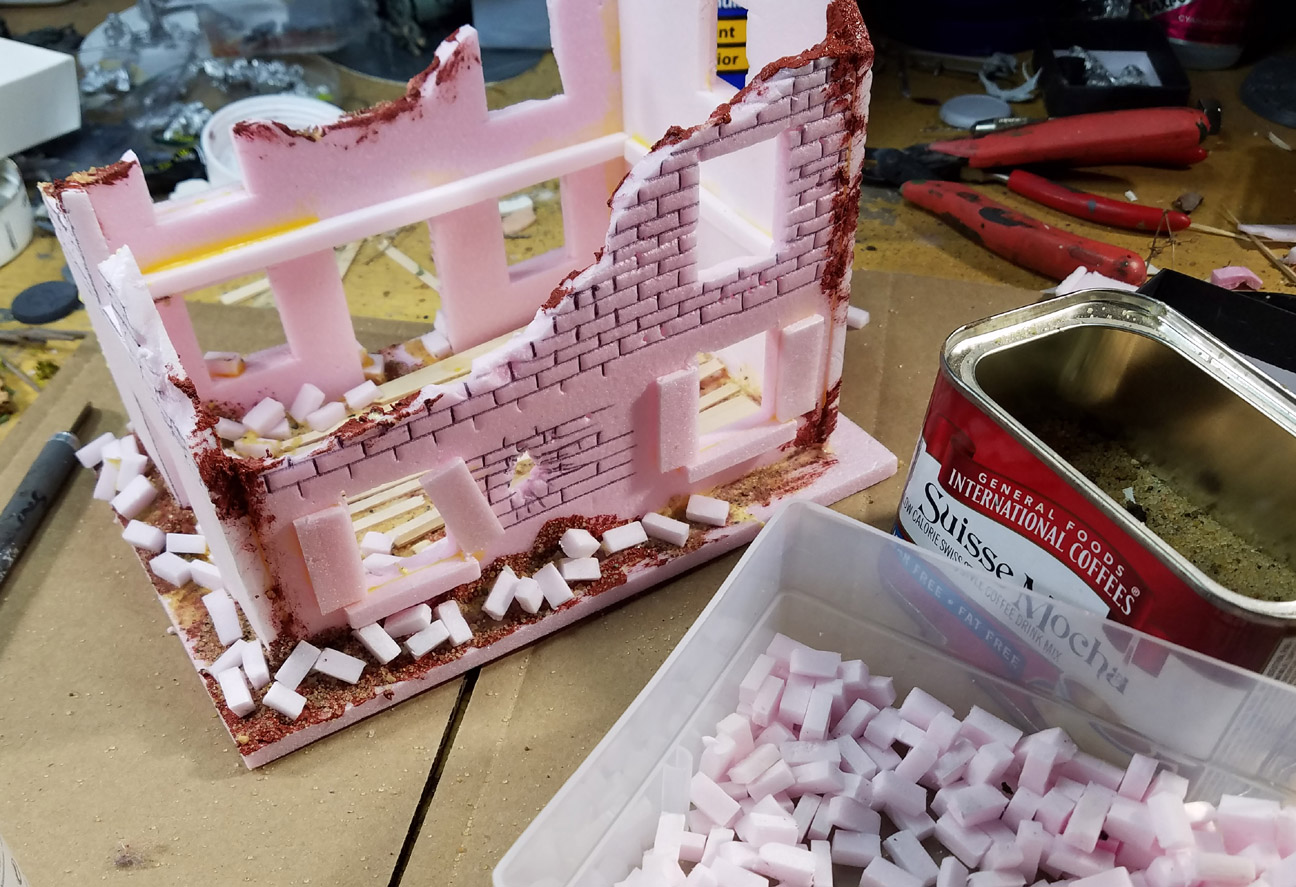 The same process of floor boards was done on the upper floor as on the main floor.  On these new buildings, I realized that it might be fun to have a few piles of bricks on this floor too.  I was even tempted to make bigger piles, as if a soldier had taken some and built his own shelter. 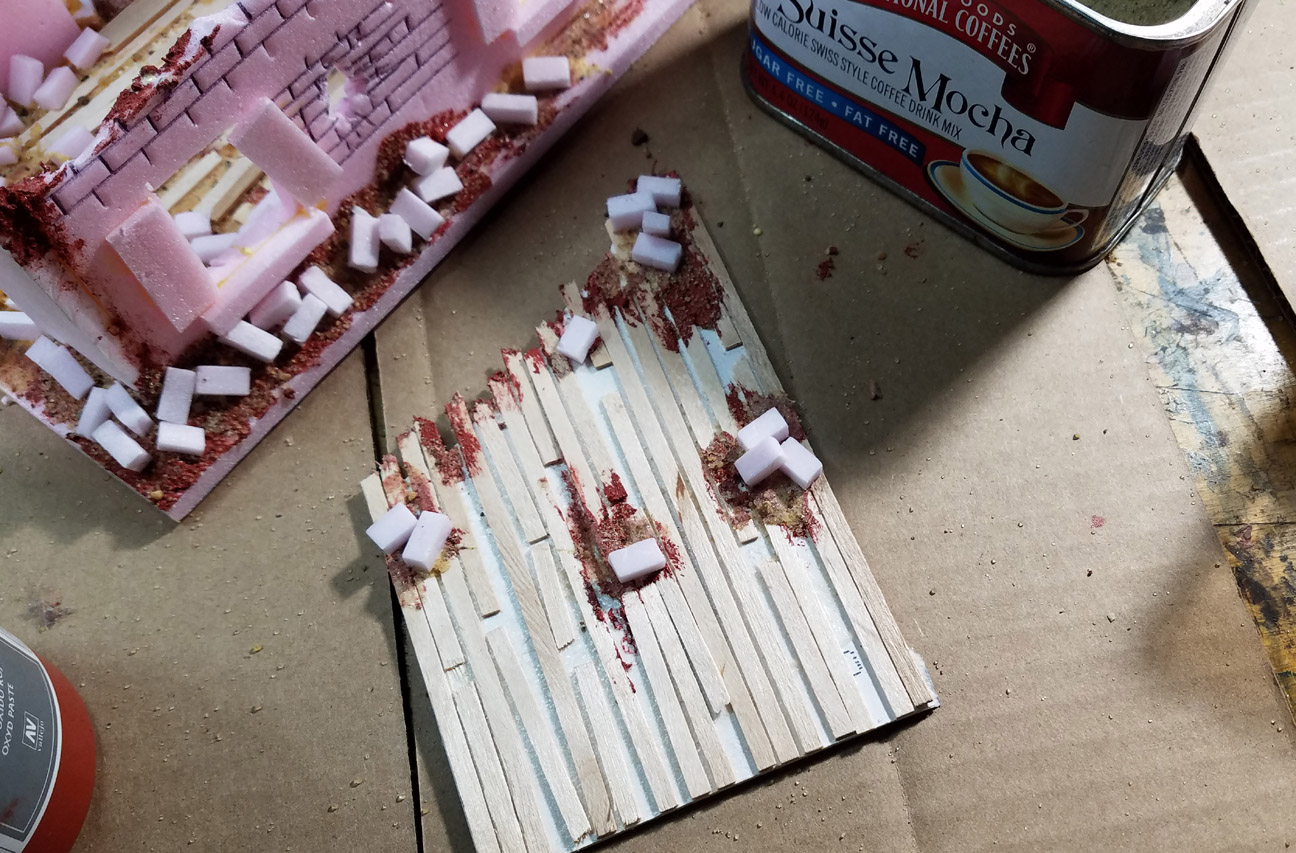 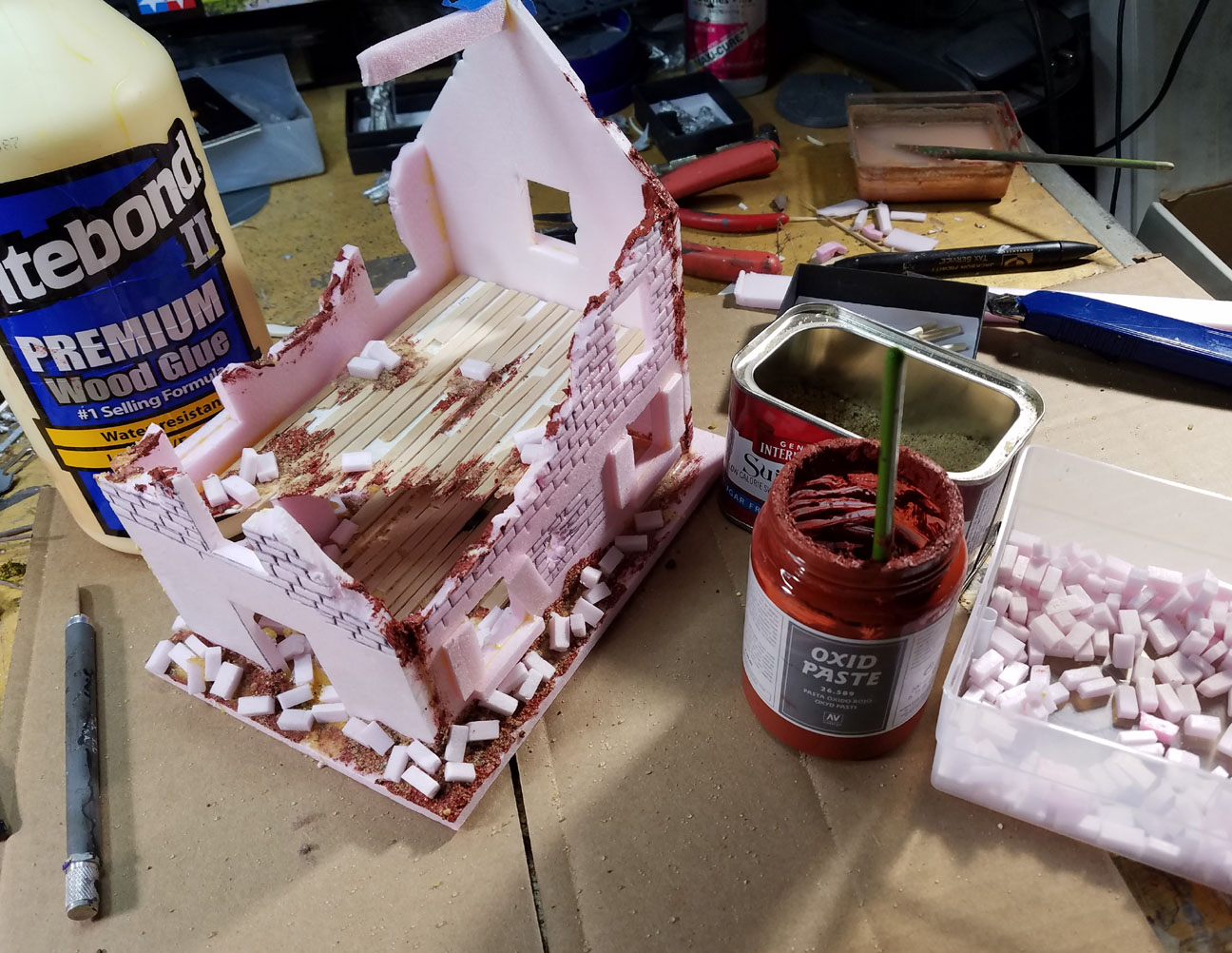 In the next episode, I will cover the next layer of texture on the outer walls, and show a new material.  This will be the final touch to create that exposed brick look, so stay tuned!! 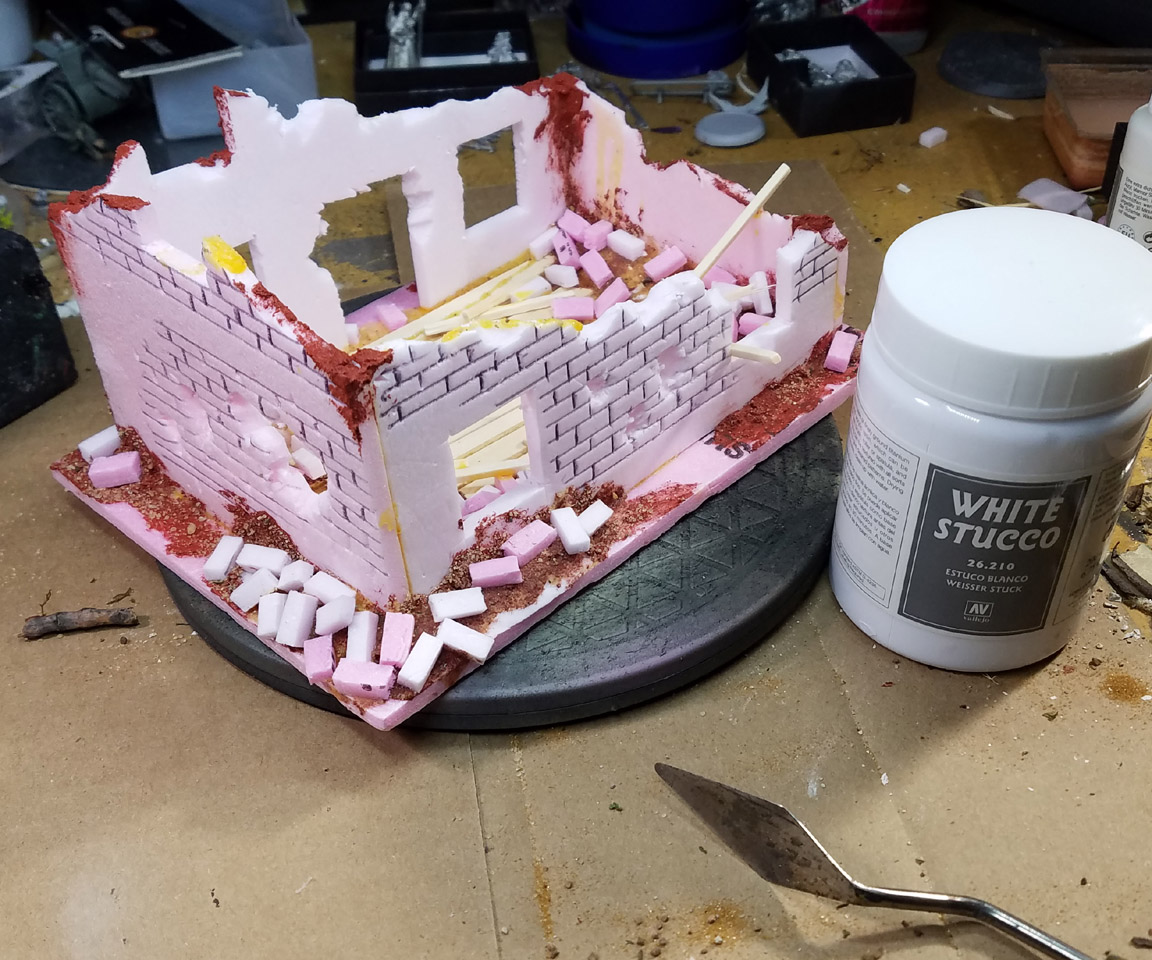