Winter in the Tropics! 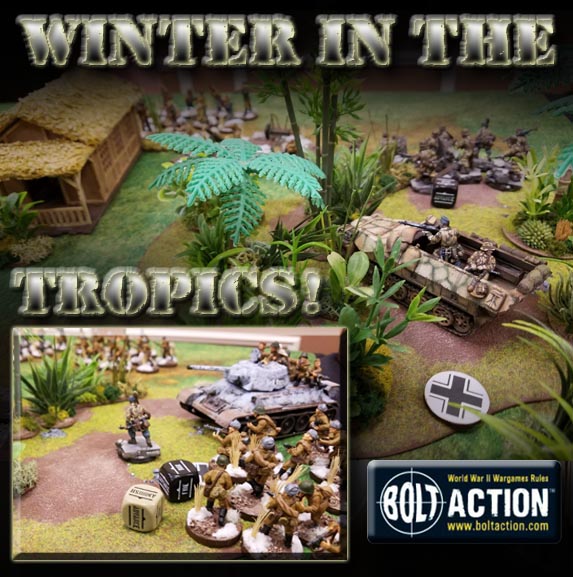 Round 4 of Operation Sting was going to be a very different animal compared to the "Cat and mouse" type games of Day 1.  The Axis was deemed to be the defender in the deadly scenario that requires you to not only set up half your units in the center, but then face a preliminary bombardment!

Fortunately I had this building to serve as cover initially, but with the confused deployment of reinforcements on subsequent turns, hiding behind something could actually leave you out in the open! 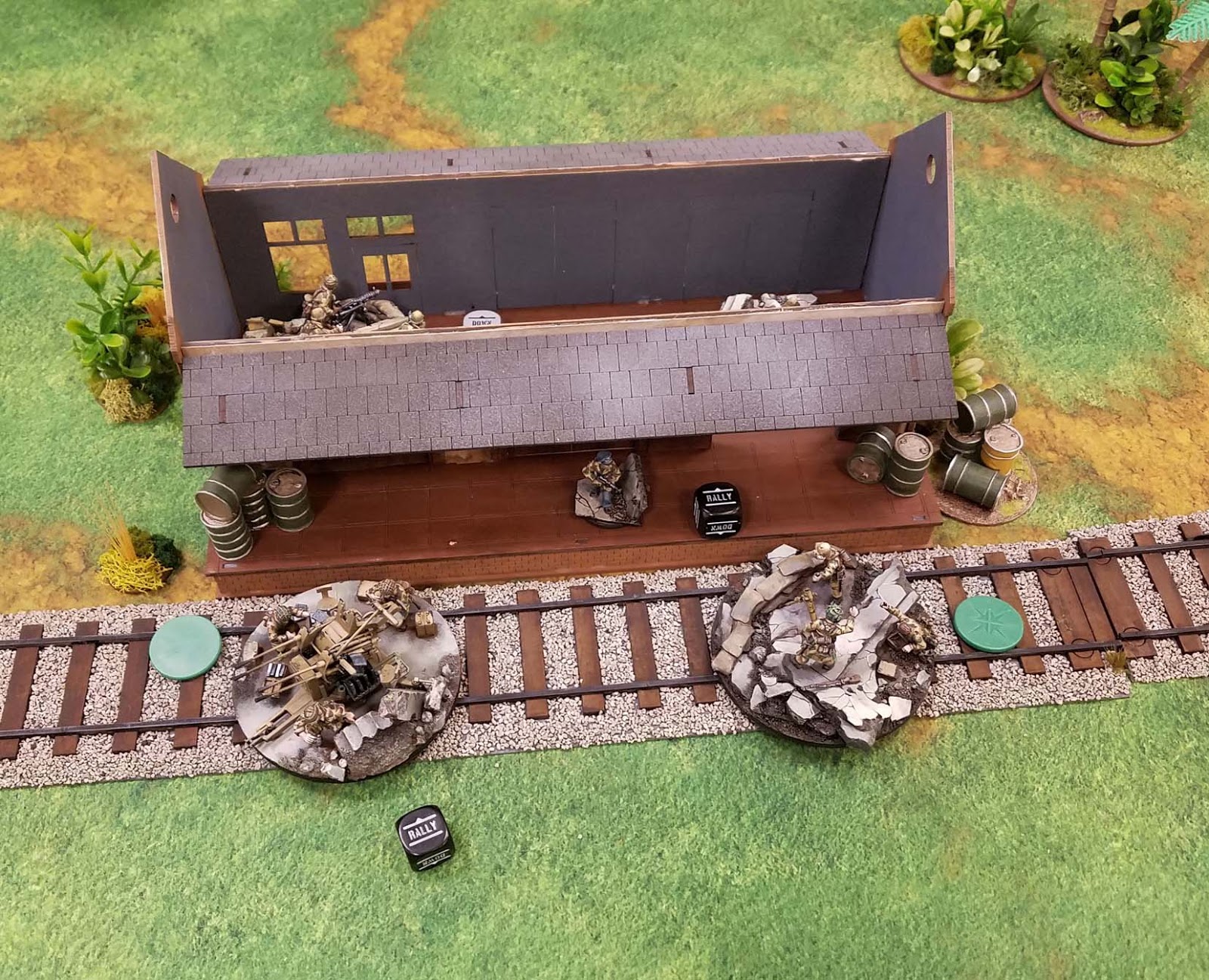 The green counters also indicate hidden units, which I have done in numerous battle reports in the past.  I was pretty used to utilizing that technique!  This would prevent those early lucky shots and kills.  Even more important, as that prelim bombardment always dishes out lots of pins before the game even starts. 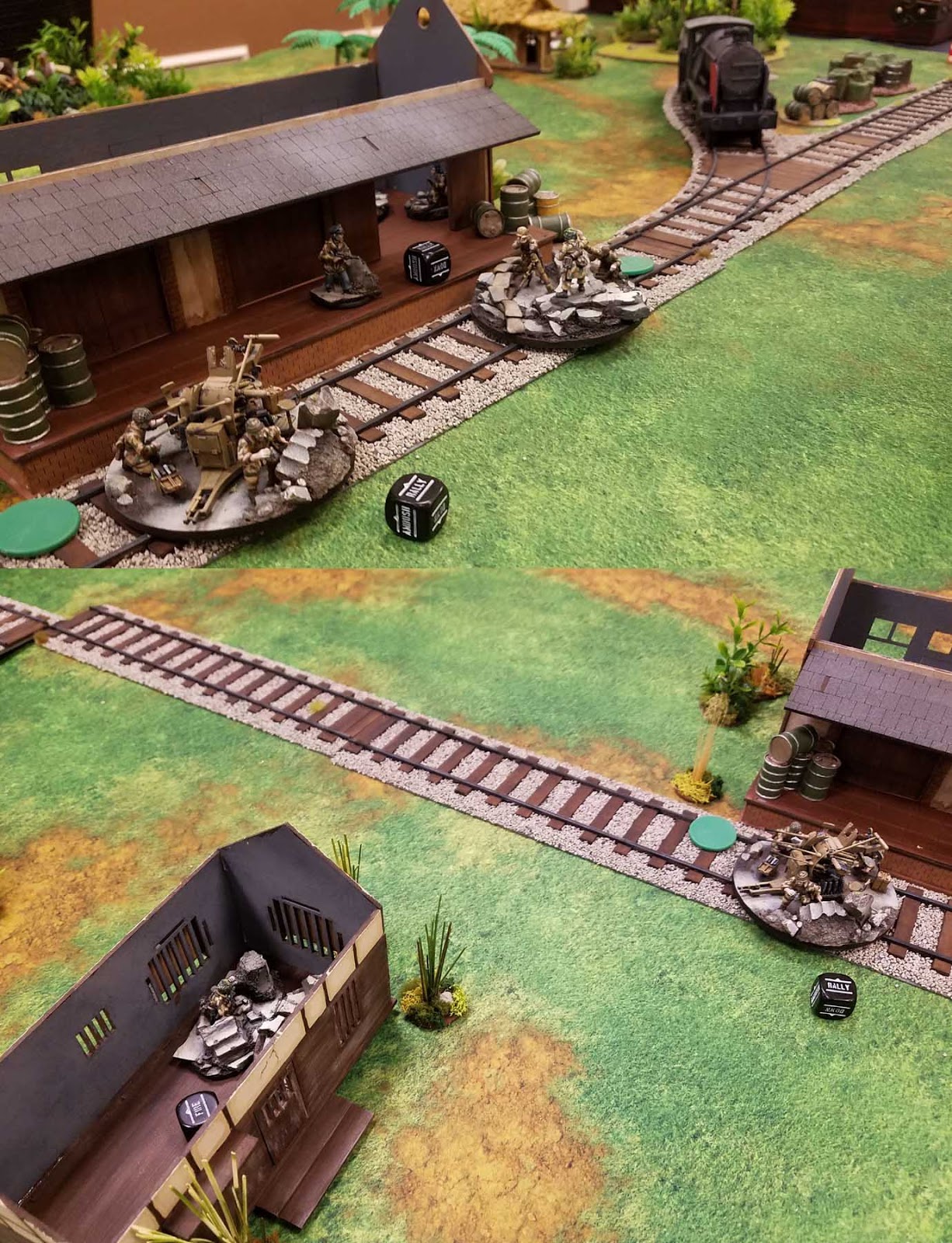 The opposition this time would be a batch of angry Soviets, including lots of Partisans.  Here they are using the sneaky maneuver of "laying in the weeds" 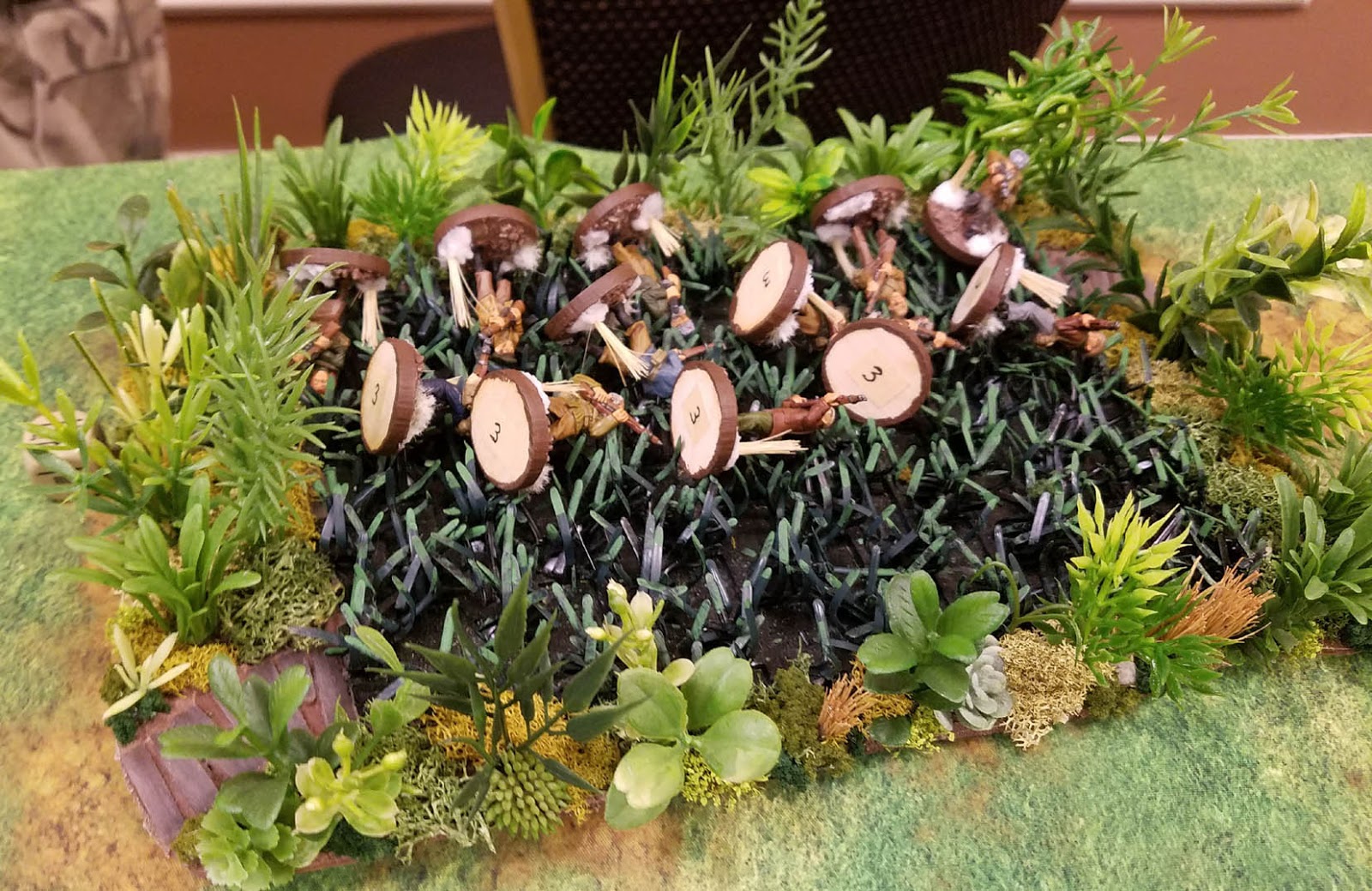 They kept ducking, because a mortar was ranged in on them. The Germans thought this would be the ideal time to bring in the submachine unit right between them and the Zis field gun!  Sadly, the sights must have been off on the guns, because the artillery piece survived.

As turns progressed, I would need for that to keep getting pins, but not be killed, so as to avoid an ambush by a big Partisan unit! 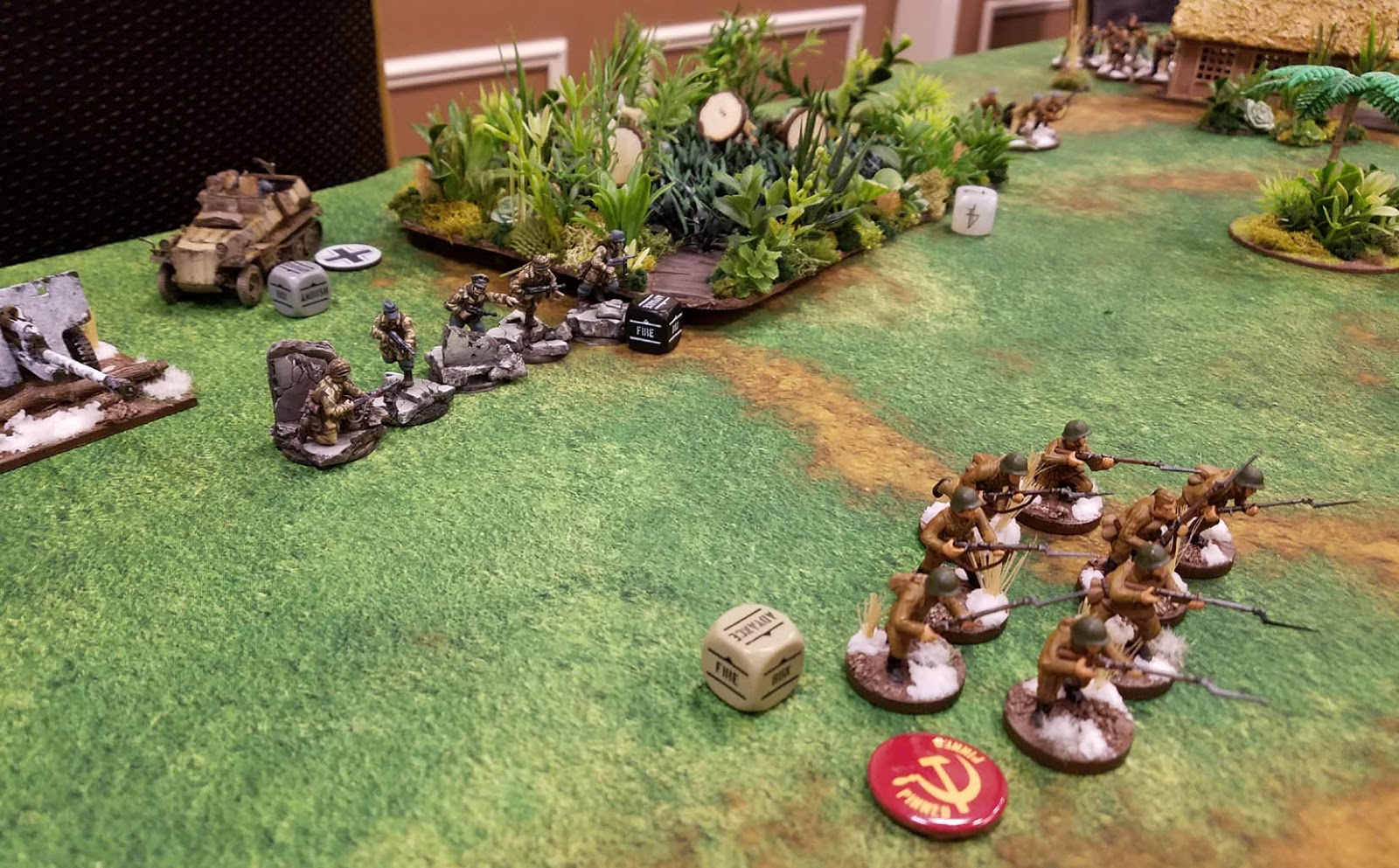 Here's a case in point.  I needed to neutralize this mortar, because it kept ranging in on one unit after another.  However, if I killed it outright, that Partisan unit on the left would really blast the Fallschirmjager unit. 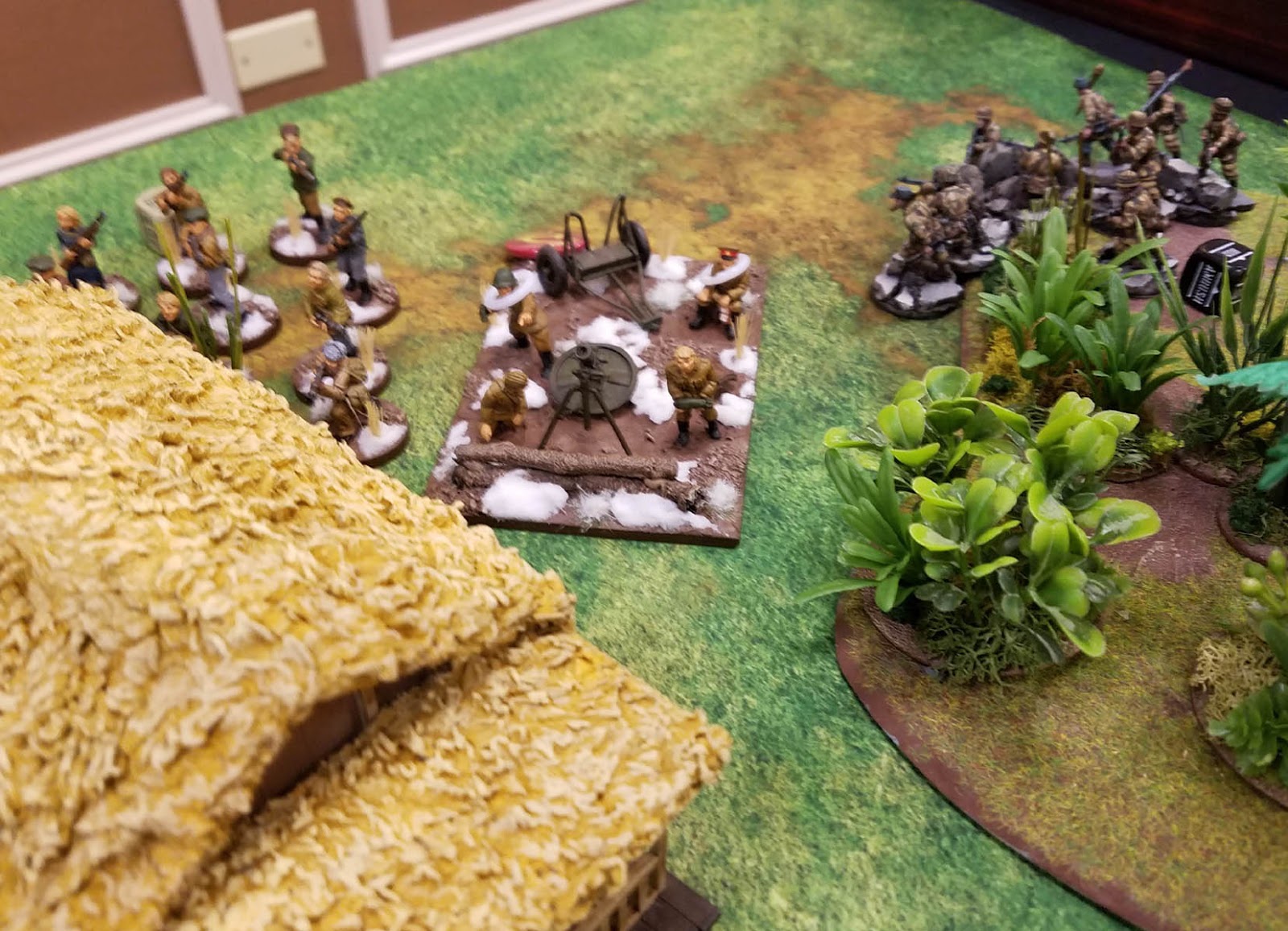 This is what I love about confused reinforcements!  You can come in on any table edge, as long as the opponent had not used it last.  As a result of that condition, it is vital to have plenty of things in reserve, and be willing to save them to respond or close off an edge in the first place. 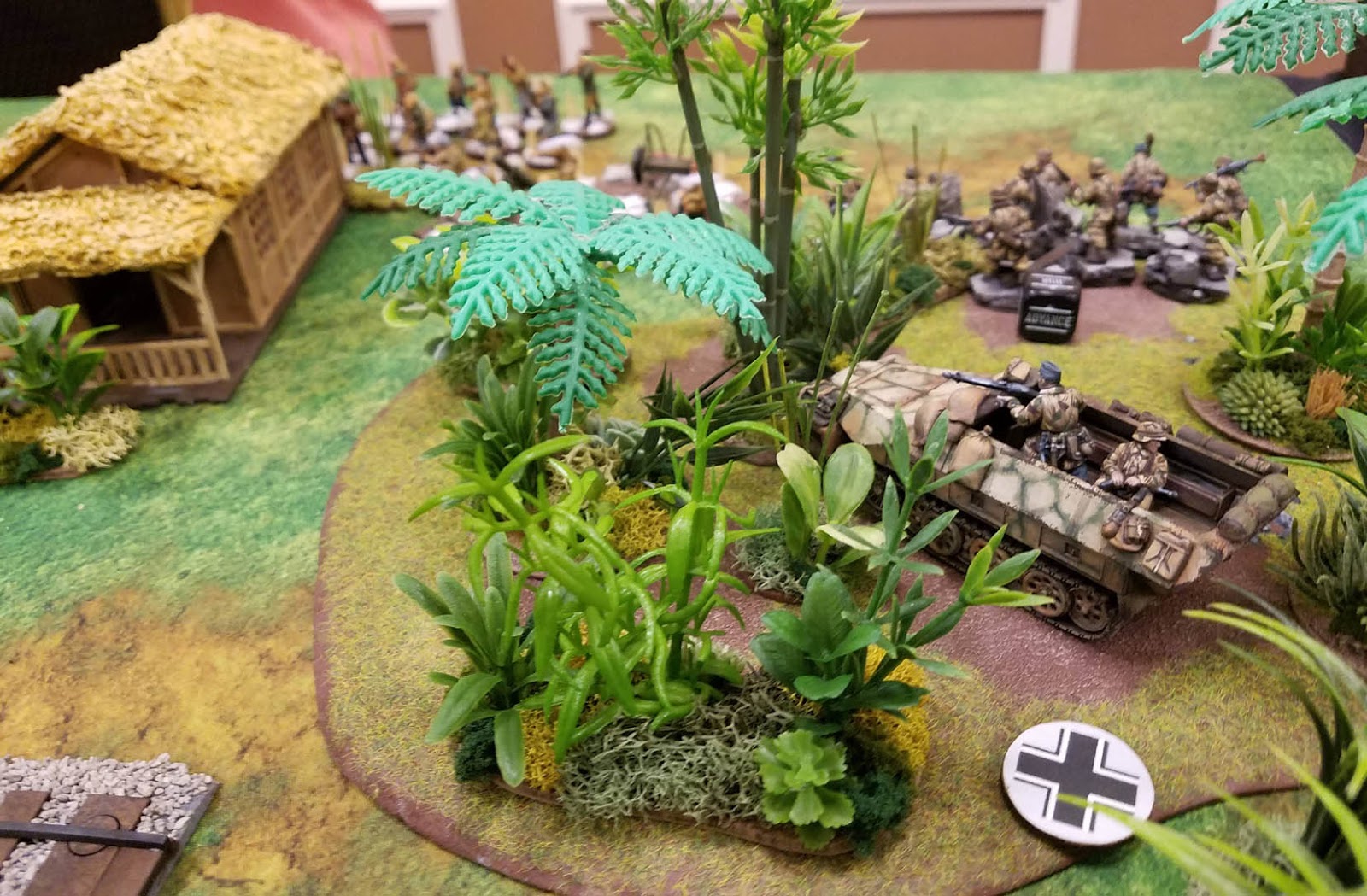 Another unit of inexperienced soviets advances towards the railway station... the MMG team has been hit by mortars and prep bombardments, so they seem to be doomed! 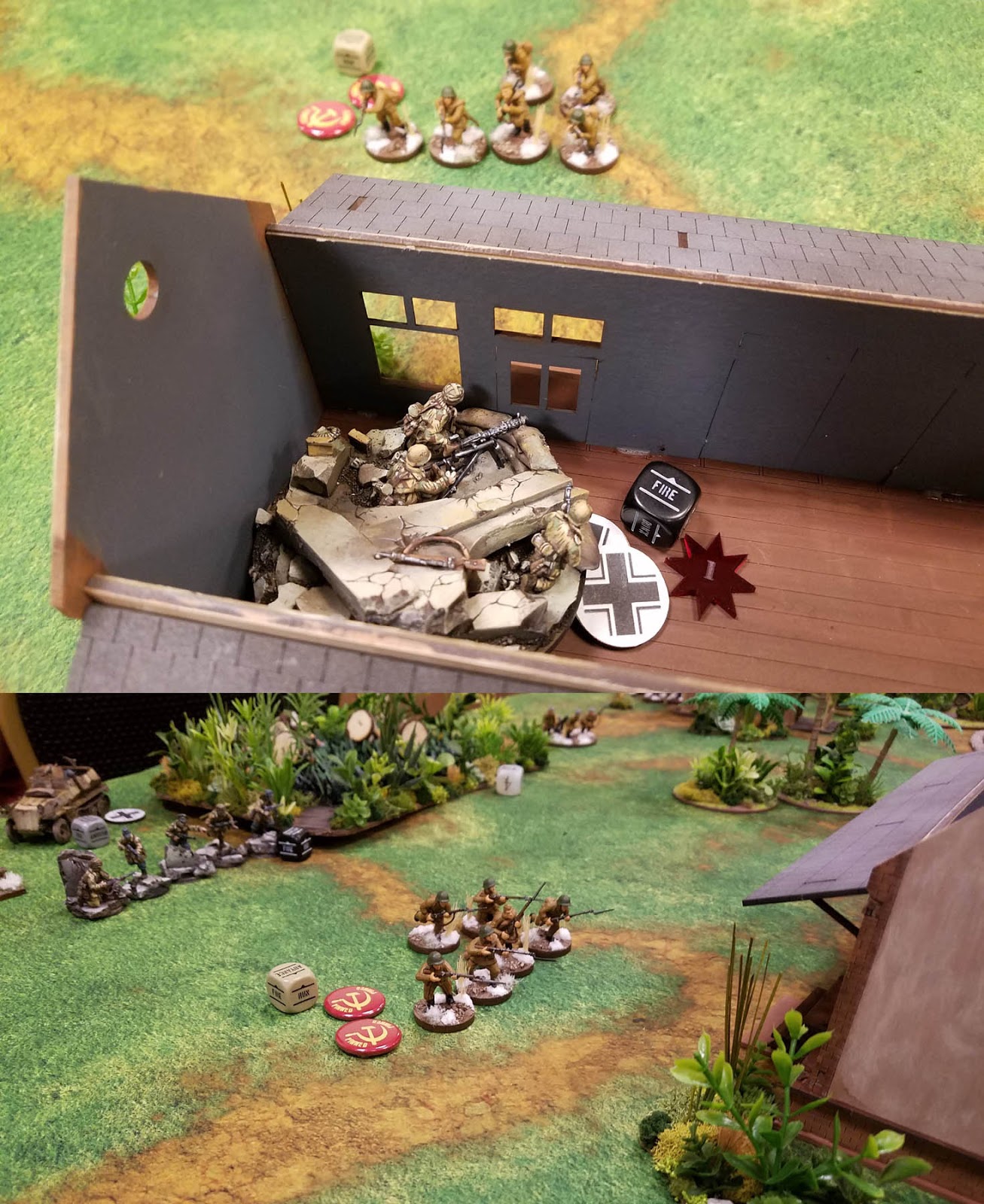 Here's another pesky unit of Partizans behind the lines.  Maybe they are the ones who brought the portable snow machine... 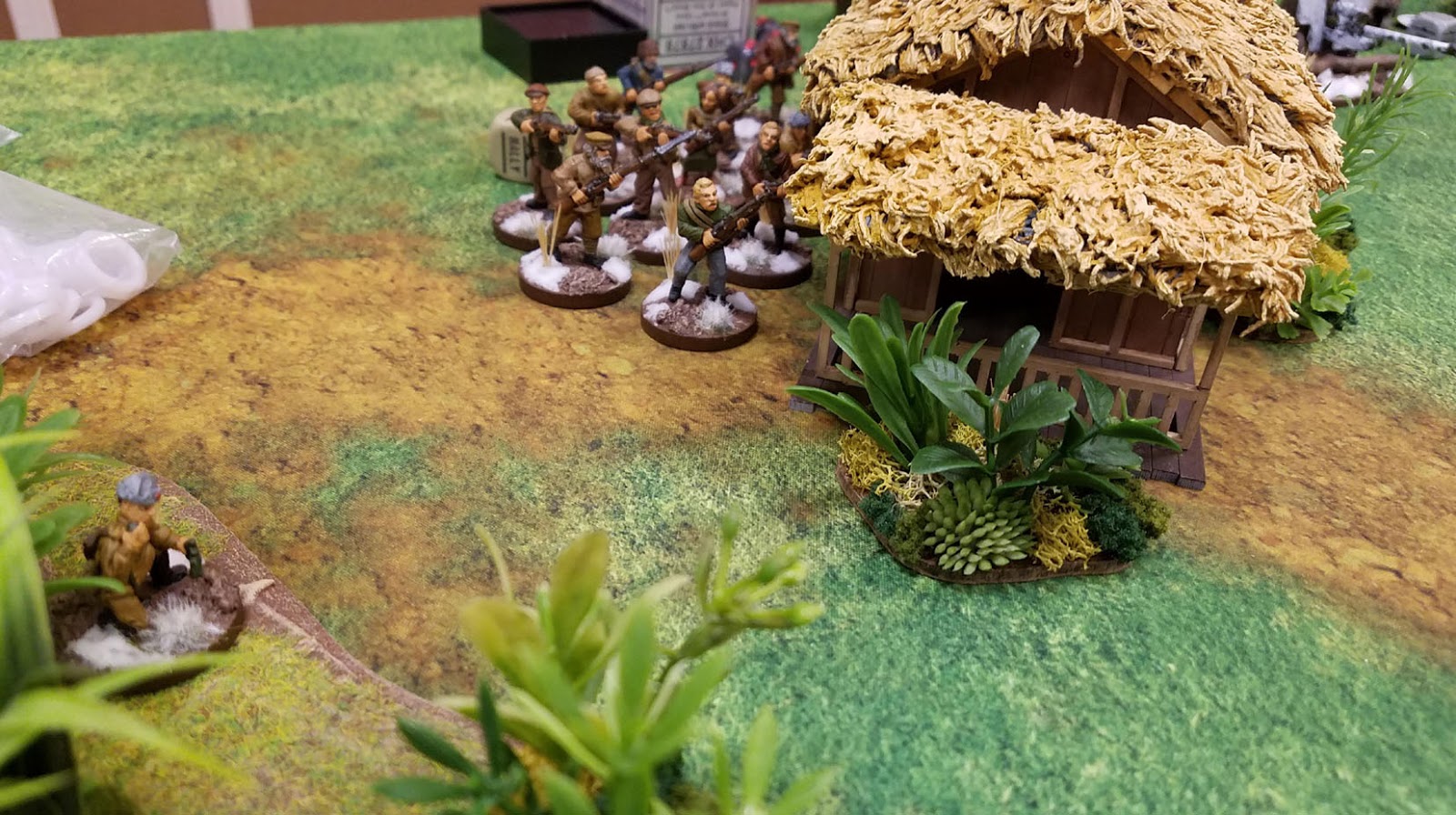 Because winter just arrived!  How did these guys manage to keep their advance hidden in the jungle with all that snow?  Maybe that quieted the squeaky track links of the T-34... 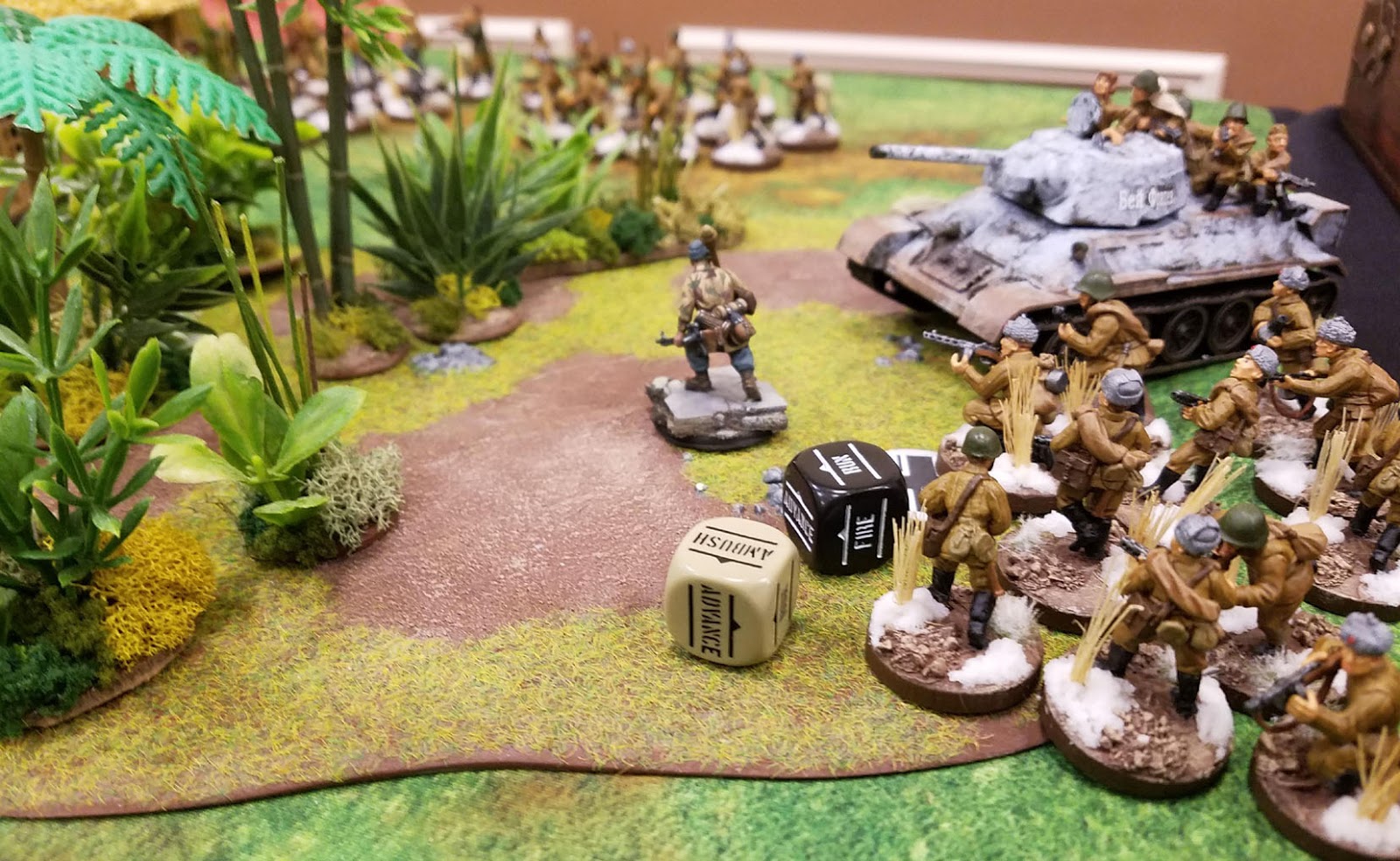 One turn after the next, units would appear in this corner of the board.  Unlike the more gentlemanly engagements against the US forces, this was going to be a real Bear Hug... a brawl to the death!!

A well placed Panzerfaust shot blew up the T-34, while an assault took out the unit of Soviets.  However, some angry tank riders would deal vengeance on the more tropical Fallschimjagers. 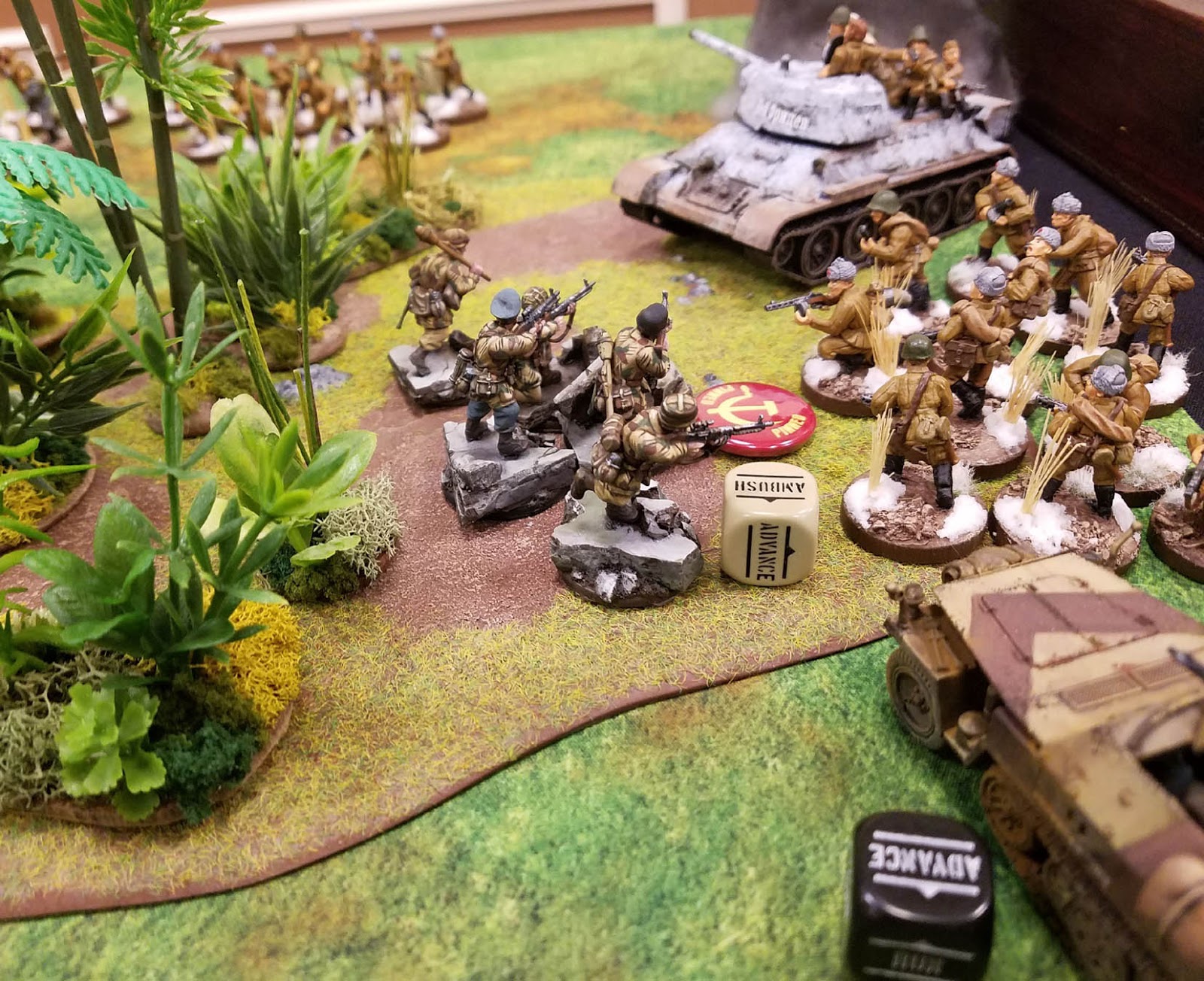 The snow camoflage on the Zis gun must have distracted the gunner of the SDKfZ, because it survived with 1 last crew manning it.  A few survivors of the German squads took cover behind terrain (and even Soviet artillery pieces!), which meant that we had a fourth consecutive draw!

I was able to accomplish my Secret Mission for an additional 5 points.  I had to keep at least 4 infantry based units intact through the entire game.  Very tough, since most of them were getting shelled before it even started!

This was definitely not the scenario or opponent to use the "Kill the enemy commander in close combat" Secret Mission.  As I mentioned a few episodes ago, matching up the scenario and secret mission and opponent together would be trickier with each round.  Just one more left, so stay tuned!! 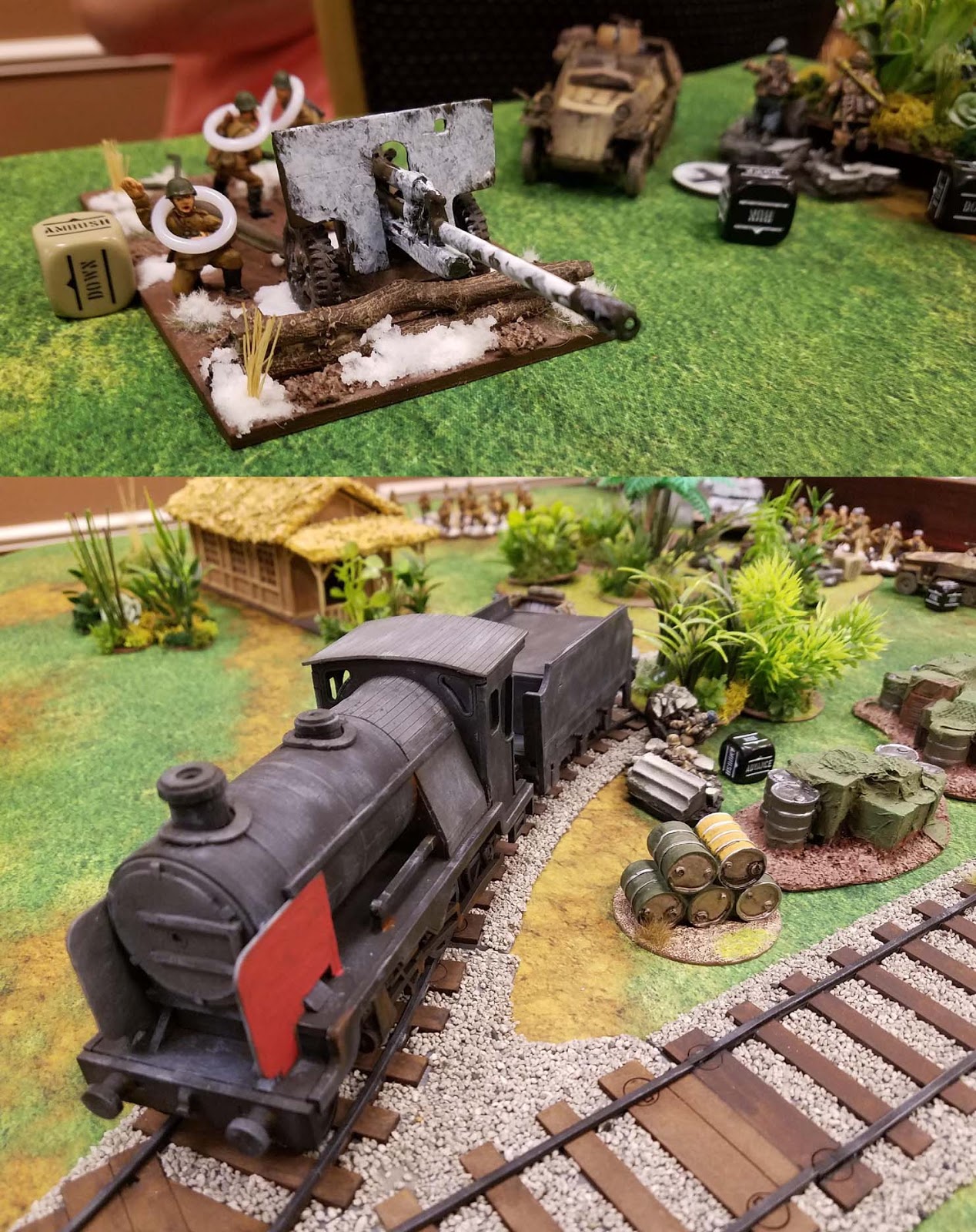 Posted by wappellious at 2:13 PM No comments: