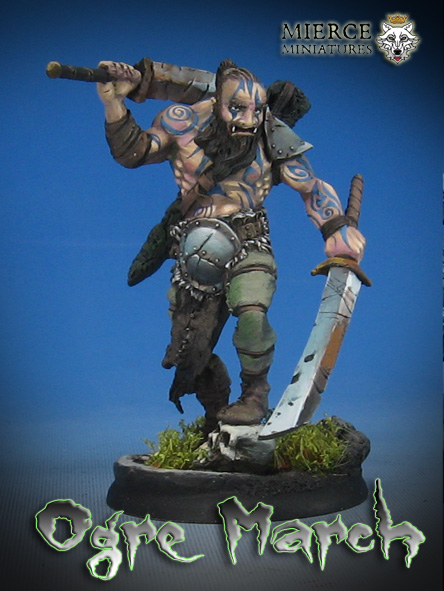 These Mierce Miniatures ogres were among the first massed painting groups attempted with oils.  It was also the first time that I realized how perfect this medium was for larger scale figures.

With the extended drying times, working on several figures with large surface areas to cover was not a problem, and I was able to blend these right on the figure instead of painting one layer over another, or having to use a number of glazes to tint and shade, etc.

Since these were a unit of about 14 minis, it was also much easier to maintain the same colors across the whole batch than with the acrylic paints.  Using the greenish pants as an example, it is possible to simply paint the entire area on shade of green on every figure, and then take a lighter tone and blend that into each of the unit figures.

This makes it a lot easier to get that shading on all the members of the unit, as you only need to take one color and blend it into another, without the need to mix several versions of that color and layer it lighter or darker.

I have other units of Mierce large scale infantry, so I will try to make more step by step posts of that process and even attempt some live sessions and YouTube episodes on this topic!

Keep in mind that I want to try and feature a new "unit painting" process each month on the Patreon Page.  I just sent the $5 subscribers the second Dark Elf skin tone Painting Pyramid episode in preparation for the 4 part series!!

More will be posted on that this week on the Page: