Racing towards the finish line: Trying to get ready for Bilbo's Bash! 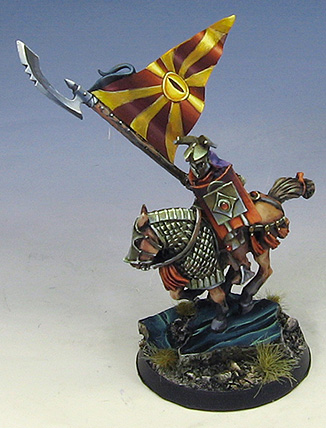 Sorry for the delay folks!  It was Cathy's birthday today, so it was a busy day in Wappelville.

You saw in the previous post that I made a bonehead mistake on my Evil roster, somehow adding 2 extra war drums!  I guess I should not be entirely surprised with the pace of things these days.  Bilbo's Bash is this coming weekend, and a ton of work remains to be done... Yikes! 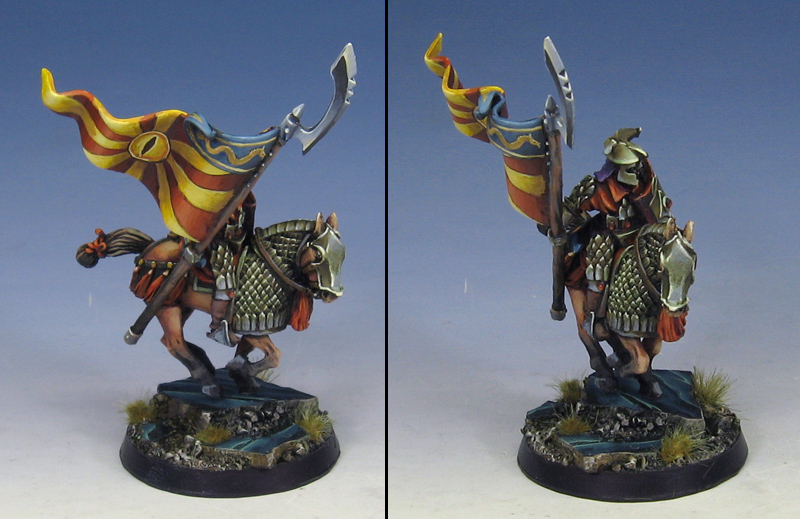 I tried to show how I went about making the banner figure as quickly as possible, utilizing a partially painted Kataphract.  I added a banner made of a Tomb Kings halberd, tin foil and green stuff. 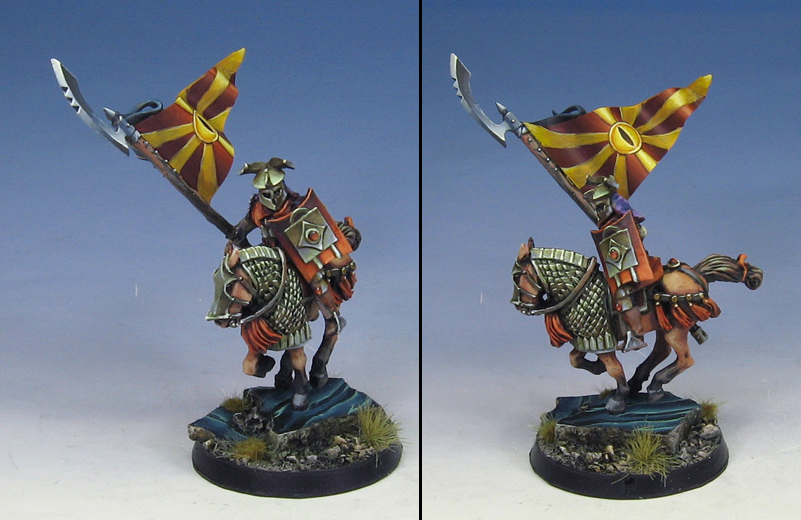 This had to be painted in a slightly different color scheme than the other Easterling cavalry you have seen, since this guy does not have the Black Dragon upgrade.  In the heat of the tournament, I don't want to forget something like that, as it it is not very fair to my opponents. 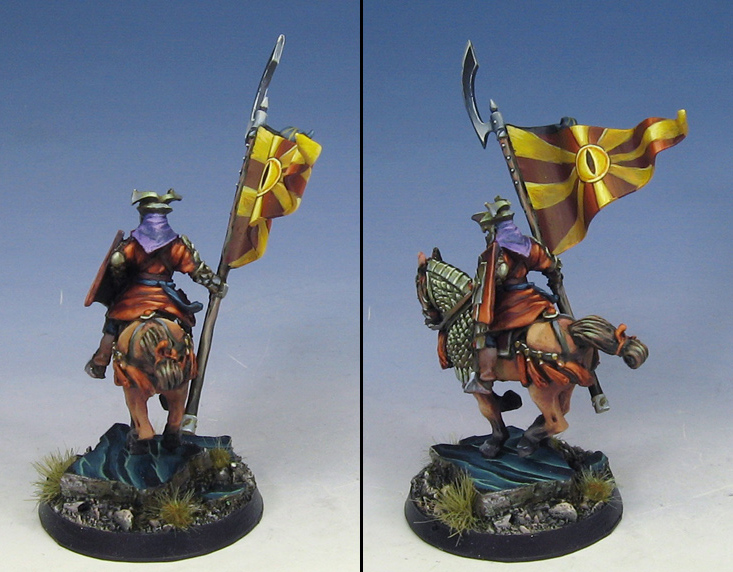 The banner was painted as close as possible to the 'official' metal version, but I wanted to add a serpent (following my story line), and have a stronger association with Sauron.  Thus, the Eye of Sauron is featured, as it was on the Khandish banners. 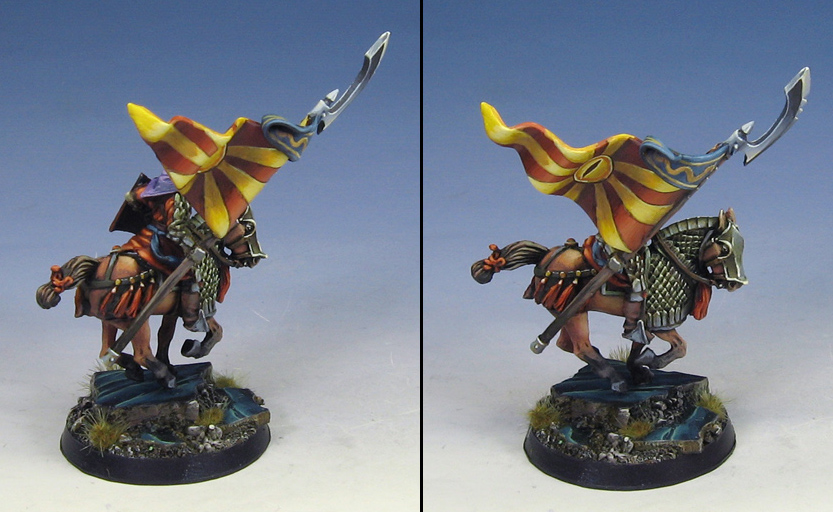 The armor was painted less gold than the Black Dragons... almost more of a brassy look.  The idea was to have them be a lower class of warrior 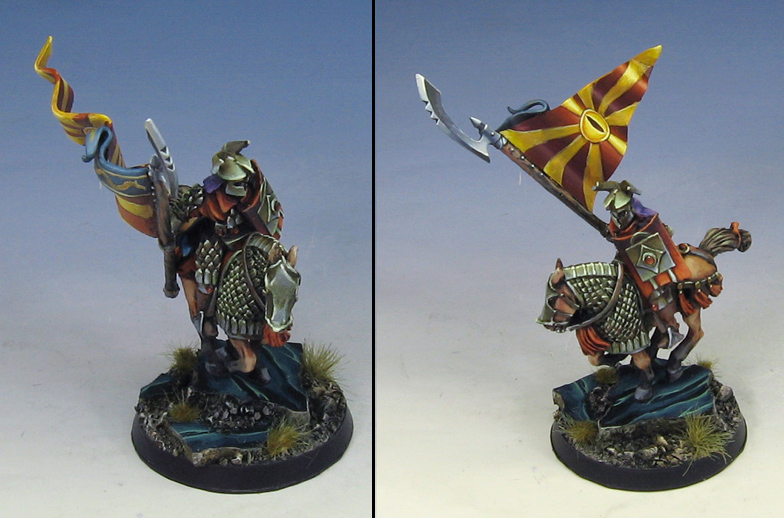 And yes, all the Uglies love a party!  Especially when there is CAKE! 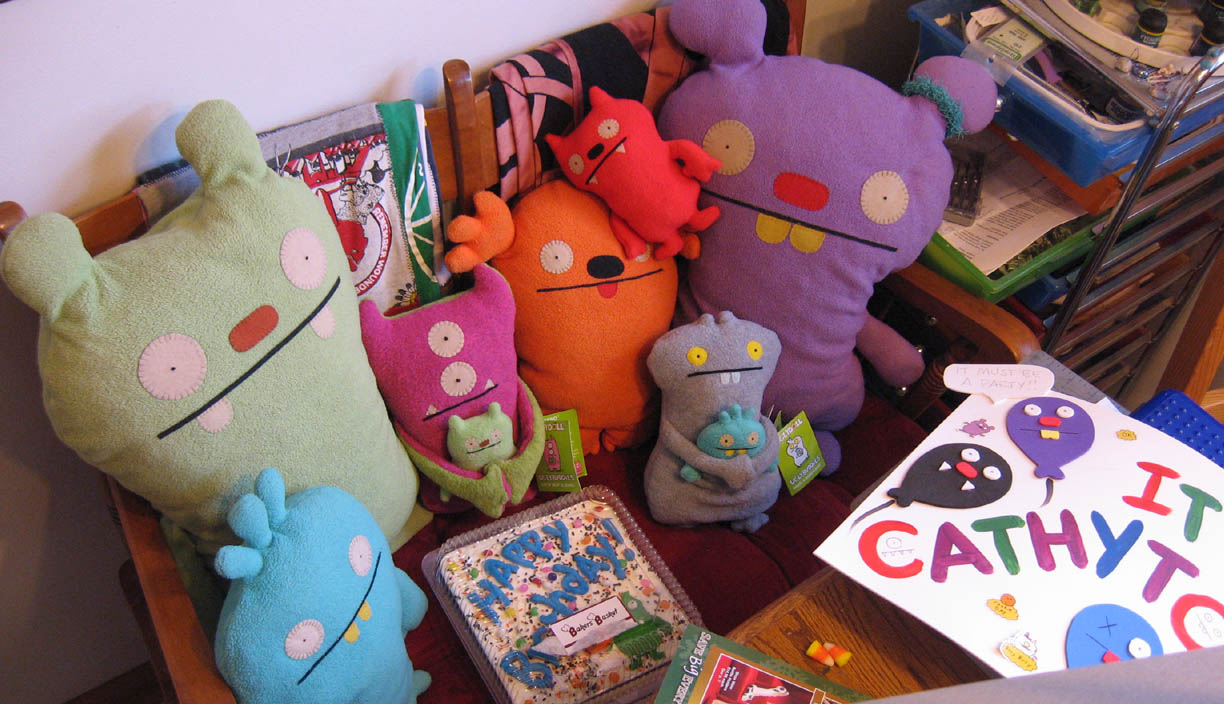 Not all terrain projects are the same.  This is one of the more unusual terrain pieces I have built. :-)  The little guys need a place to play, after all! 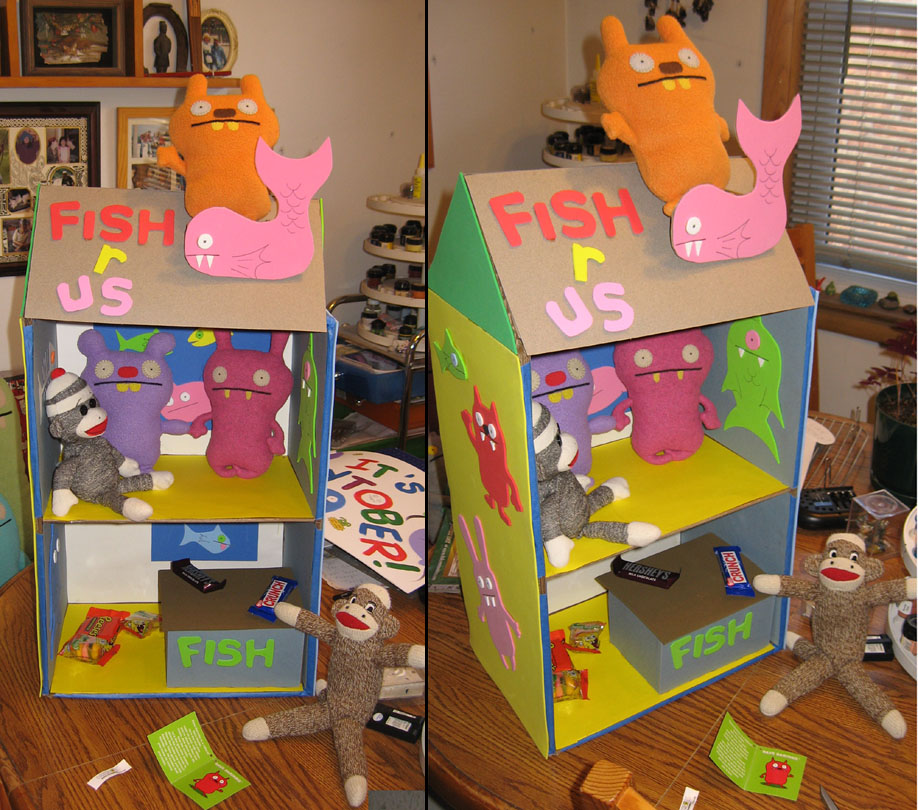 A grand old flag... what you do when you mess up your list! 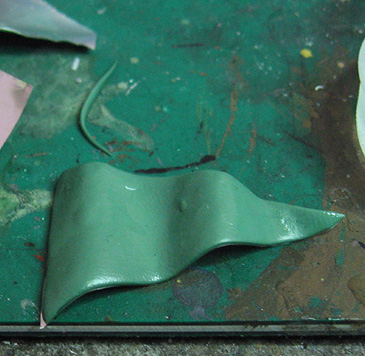 When it was pointed out to me a few days ago that I had messed up my Easterling / Khand roster by putting in 2 extra and unwanted war drums, I had some serious reworking at hand!  Unfortunately, time was not on my side.  Also, I could only add what I had available in terms of miniatures.

In the end, I subtracted an infantry, took the 30 war drum points and added a Kataphract with a banner.  The ruling on the Khandish King's banner meant that I was giving up 2 Victory points no matter what.  This would give me a highly mobile banner that could keep up with the rest of the Mad Max road warriors.  I also saw it as more survivable from shooting, since you might only get the horse,  Even if you did, once on foot, he could pass that banner to someone else in base contact with him.

I had one unused Kataphract, but he needed a banner. 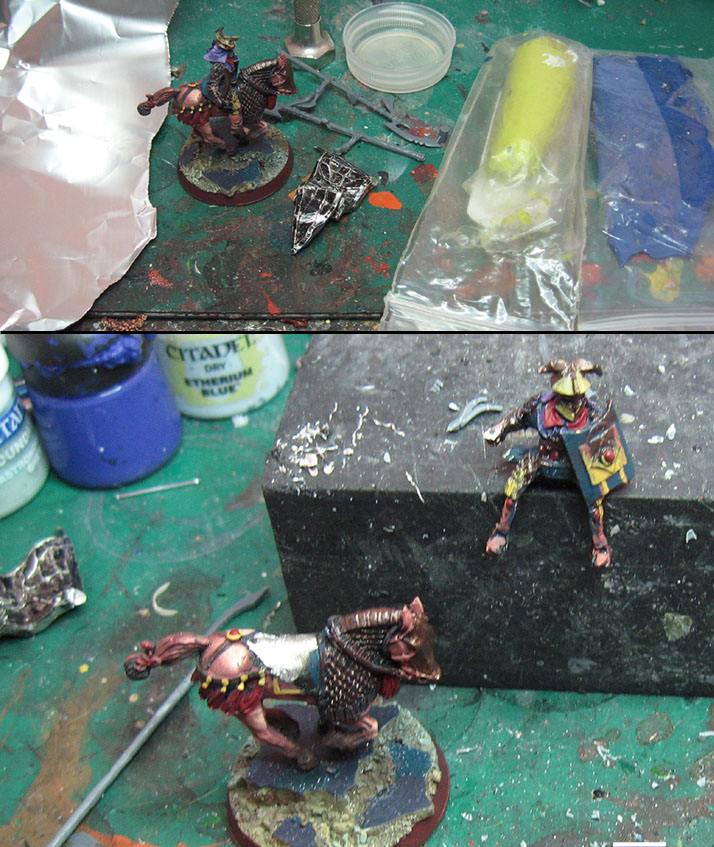 There was not way I was going to use that giant metal hunk that GW called a 'banner', so I set about making my own,  First, I used a Tomb King halberd... 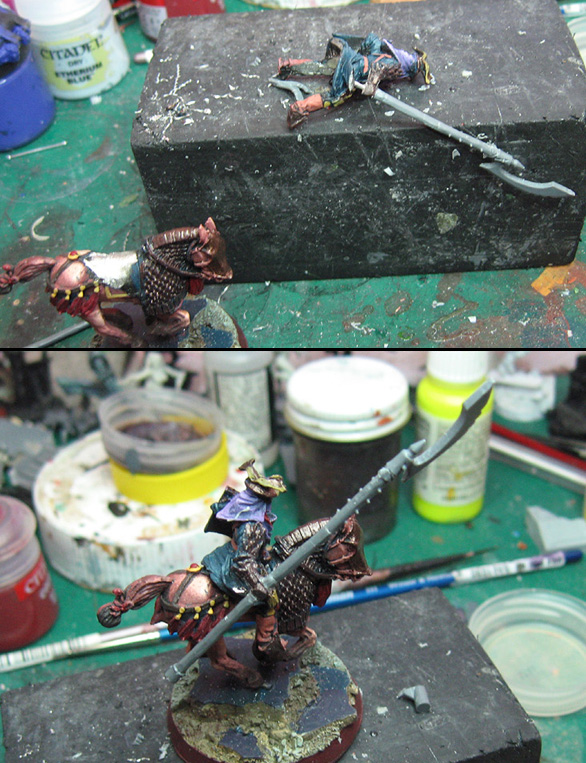 Then I used my tin foil and green stuff technique to create the actual banner.  The tin foil would support the flowing green stuff until it cured.  Once it did, I could attach it to the banner pole. 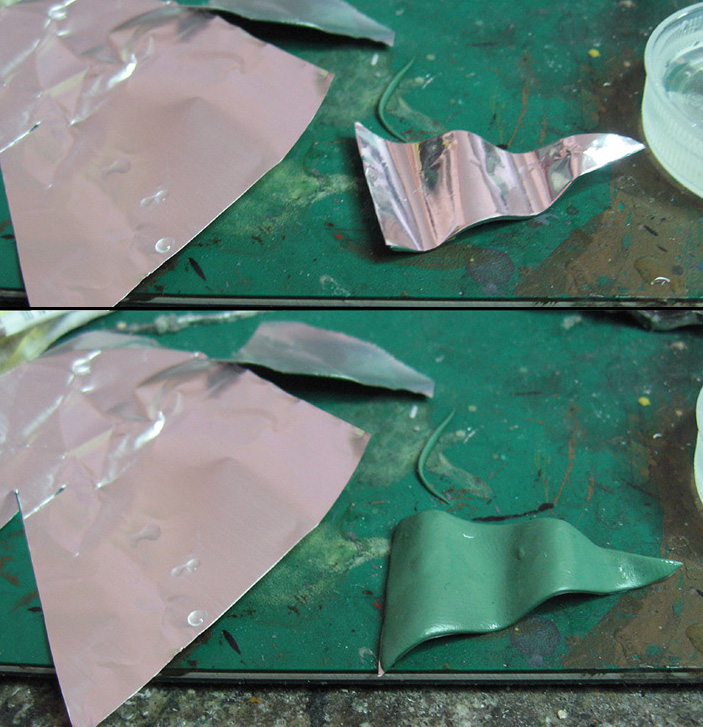 The two halves of the banner pole were pinned together to the hand, making it ready for the banner... 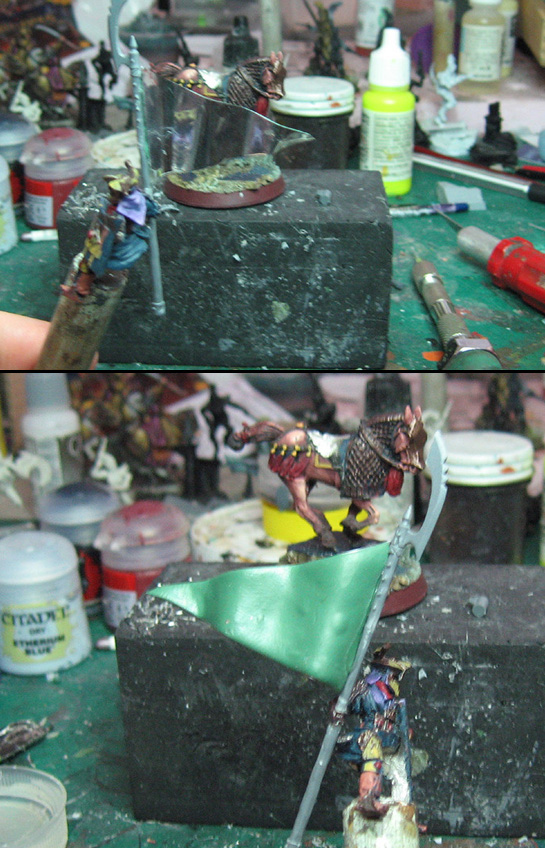 Now it is ready for painting!  This is going to be in a red color scheme, as I did not have the points to do the Black Dragon upgrade.  Besides, He's already at a -1 n his to hit rolls because of the banner.  Stay tuned for the painted images!! 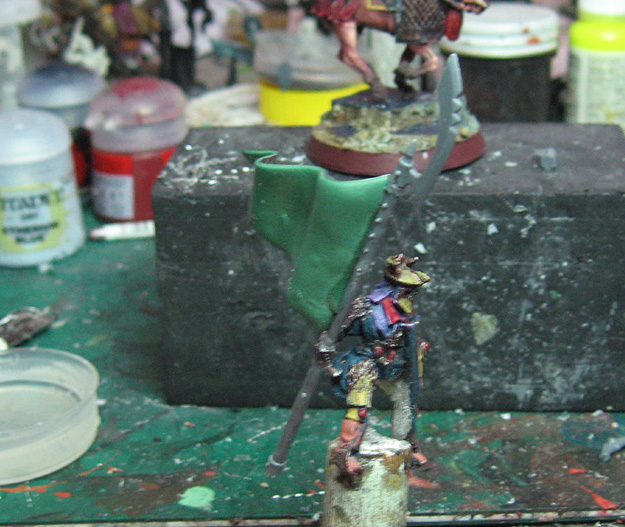 Posted by wappellious at 4:20 AM 3 comments: