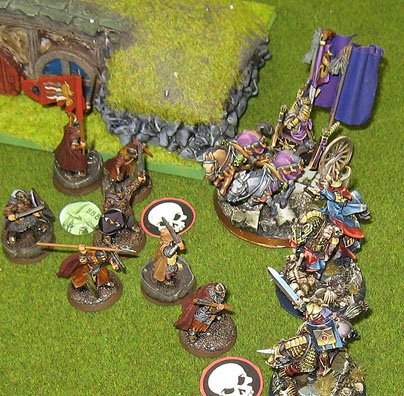 Well, folks, it is time to start looking at the actual games that I played over the weekend!

The format was a 2 day, six game event, with each person playing 3 games each with their 600 point evil and good armies.  There were 3 scenarios.  I believe this first one is Domination, and objective based scenario (they are the 5 little gems that BBB had custom made for the event!).

First, I want to talk about what I had hoped would happen with each army, starting with my Easterling / Khand alliance.

It seemed to me that most LOTR players are really keen on having archer groups of 6-10 guys.  They end up in a corner somewhere so that they have more shots.  That's great, but it also tends to keep them out of the fight.  So, I thought that my low miniature count (only 23), would not be as much of an issue since the group of archers would mostly stay out of the combats.  This would even up the numbers by default, and since my army was so fast, I would be in melee so quickly that they would not get many turns to shoot.  If they did shoot at the chariots (which would always take the lead), they would find out the hard way how hard they are to kill with shooting.

Since my cav and chariots would be getting 2 attacks on those charges, that would further help to even up those numbers, if not give me more oomph at the point of attack.

I had a very nicely painted Rohan army in front of me, which was great!  You can see archer, Royal Guard on the left, and Cavalry with the character that makes them Fight 4.

Here is our deployment. 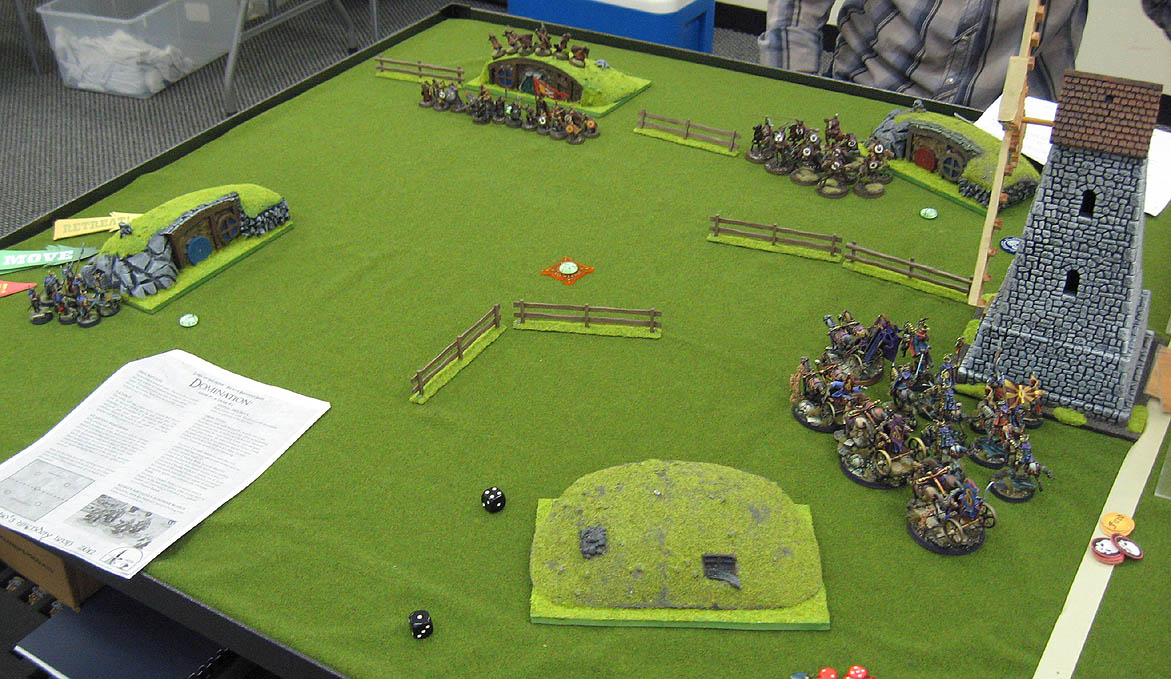 Note the very nice theme terrain.  Each table had unique terrain with some kind of theme.  Very cool!

I am going to have to spoil some of the suspense here by revealing that this game was not going to go my way no matter what, as I did some unfortunate cross-pollination of game systems.  Possibly due to fatigue (2 hours of sleep), I mistook the 40k rules for 'contesting' objectives, as opposed to the LOTR method, which is entirely different (you will see what  difference learning this tough lesson made in my next game).

Also, there were some mission cards with additional bonus points that I thought counted towards victory points.  This confusion kinda sealed my fate, but at least I got to have the chariots line up against a significant amount of cavalry.  My other 2 games will be against dwarves, so no cav there :-(

Anyway, you can see that we would start dancing around each other, especially with the horses.  I had the war drum, so I figured I could eventually set up a better charge, despite the fence in the way. 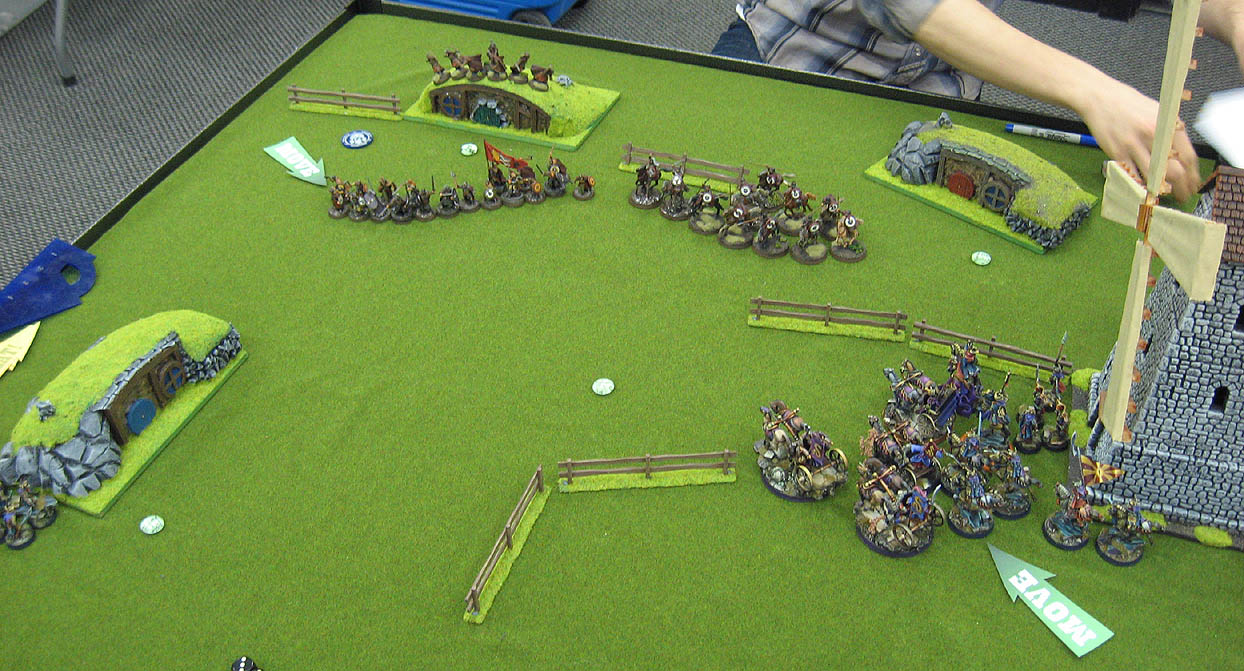 The big chariot bases can be a pain to get through terrain, as I already knew.  This meant that I had to do my forward advance in smaller chunks.  The war priest had cast his fury, waiting for bow shots from the archers, as well as throwing spears. 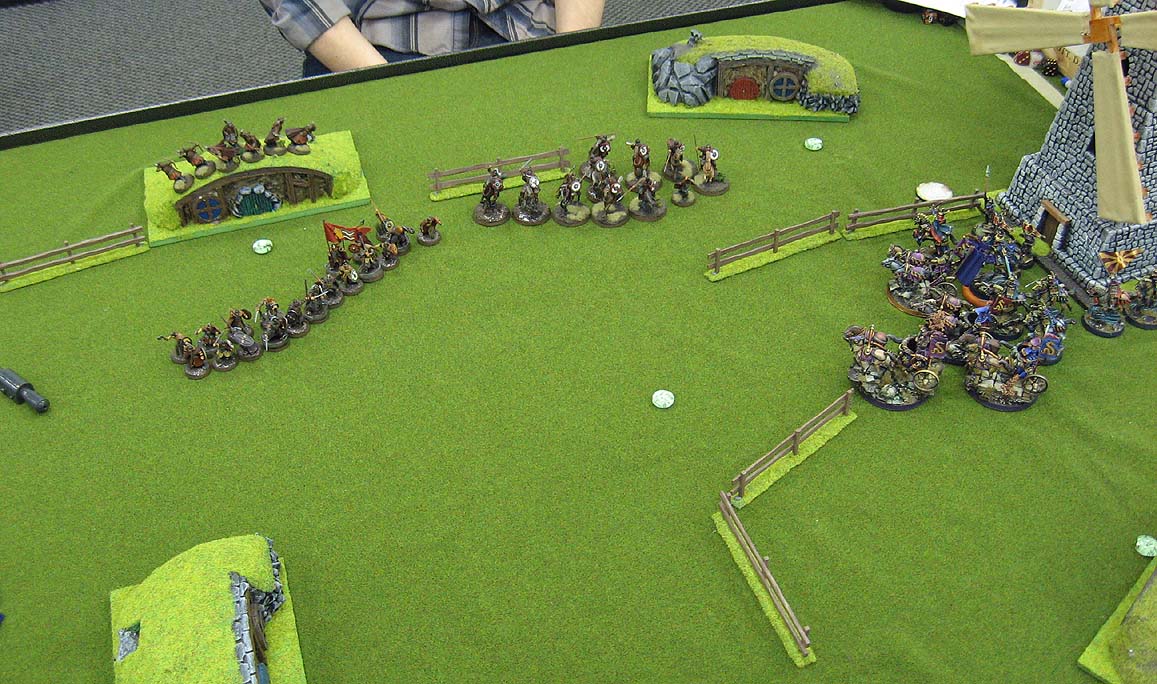 The archers fired everything at the King's chariot.  This would be a recurring theme for the weekend.  All the good players were obsessed with shooting at the chariots.  Thank goodness for me!  Many of the shots either missed or plinked off the chariot.  I never did make any fate roll, though.

I made my move to the left to see if I could get the Royal Guard in range for a charge, or hit the cavalry with chariots, thus gaining the charge bonus. 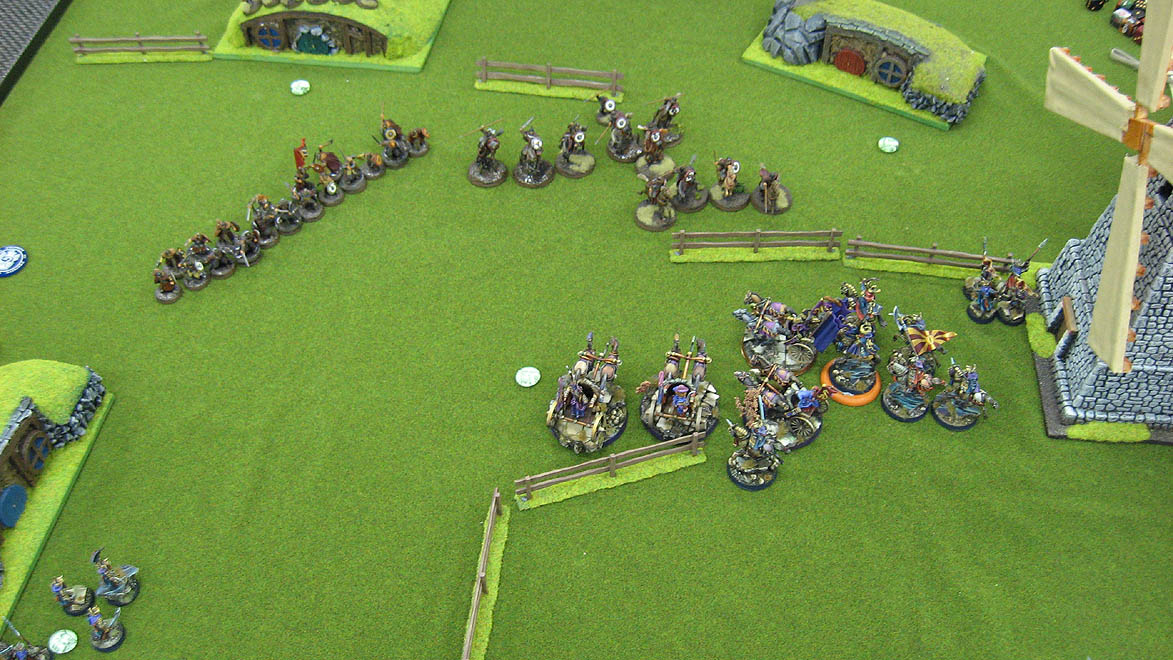 I had the priest's infantry escort hop the fence to draw some of the horses their way.  My hope was to hit the horses that stayed behind. 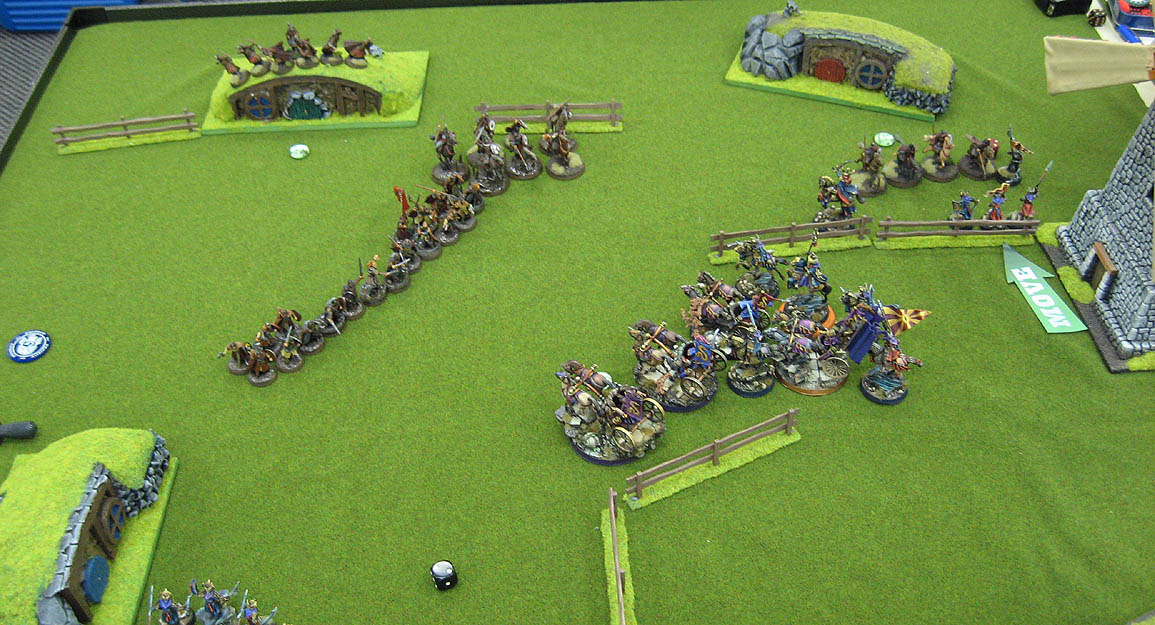 Well, I did manage to get off that charge, and you can see the results... lots of skulls!  Sadly, this would be the high water mark for me, as you will note the blue priority marker in the next image. 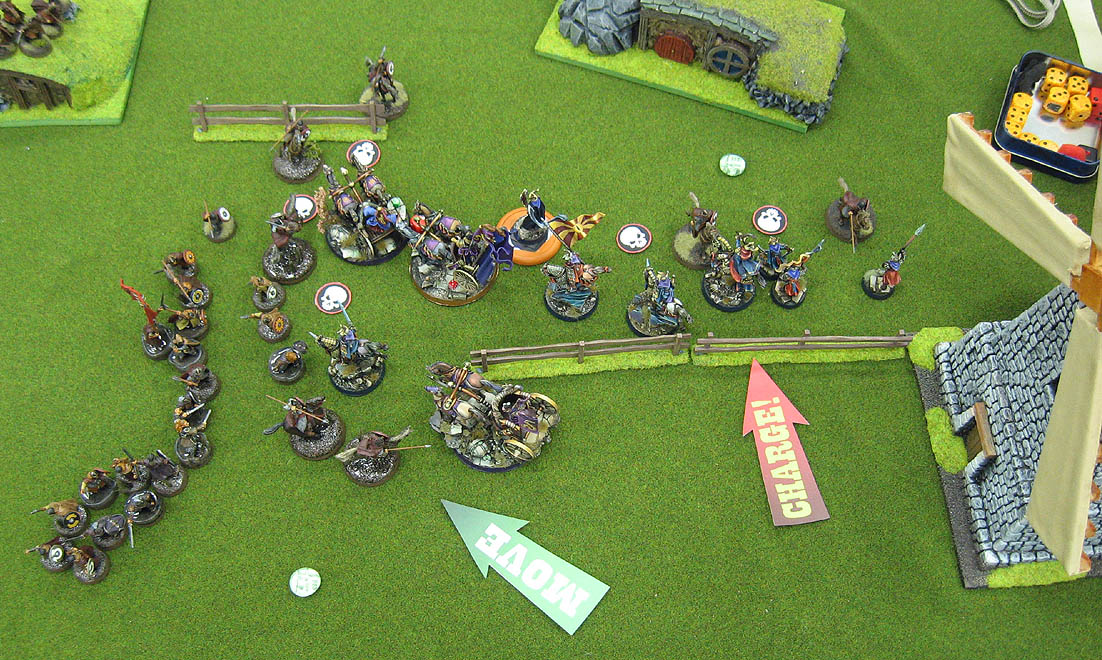 That blue priority marker would spend much more time on the good side, and that would make things very rough for the Easterlings and the King.  I tried to spend some might, but the 50/50 rolls didn't go very well either.  This would allow the Royal guard to get involved, and that's bad! 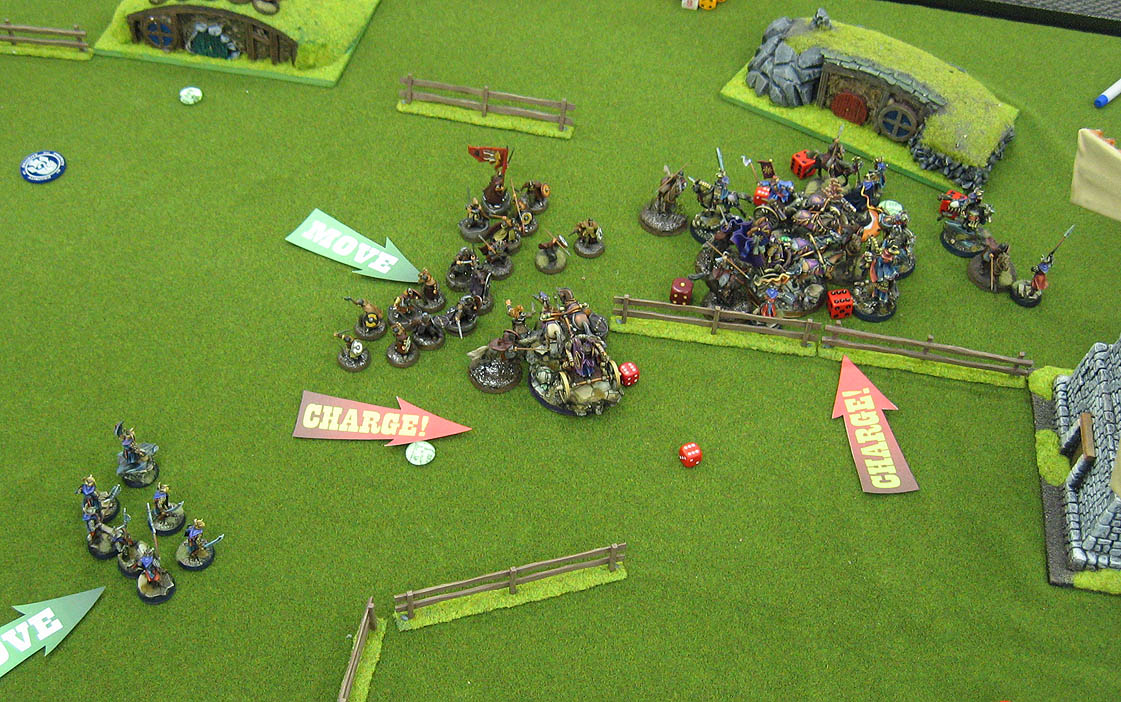 My cavalry and chariots really did do a number on the Rohan riders, despite the equal fight skills.  The banner helped a bit.  You will see dwindling numbers of the Rohan Riders as the game moves along... 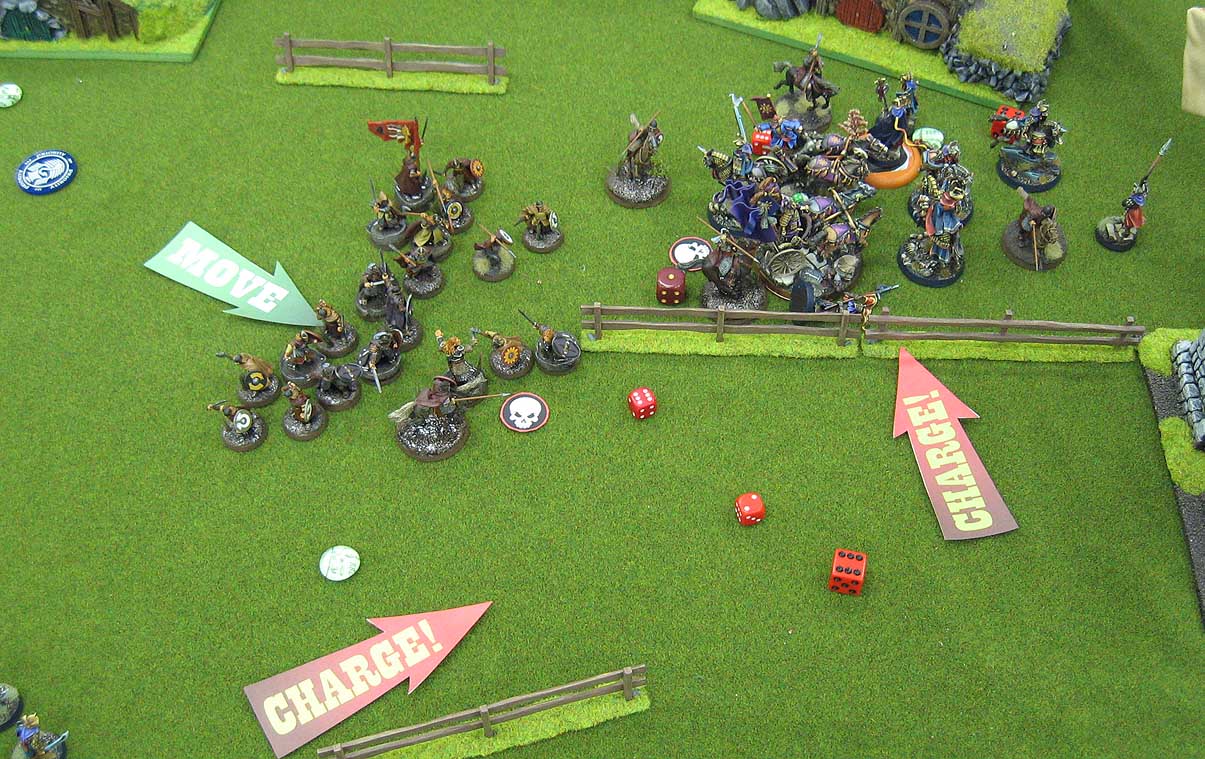 At this point, the confusion over the bonus mission would do me in.  I thought I needed to get more than one figure within 6" of the Rohan board edge to claim that 5 point bonus.  Since I assumed (incorrectly) that it counted towards victory points, I thought I could give up an objective or two and still be OK.  Rohan's special mission was to have his general cause more casualties than me.  I was already ahead on that, so I really thought I was sitting pretty! 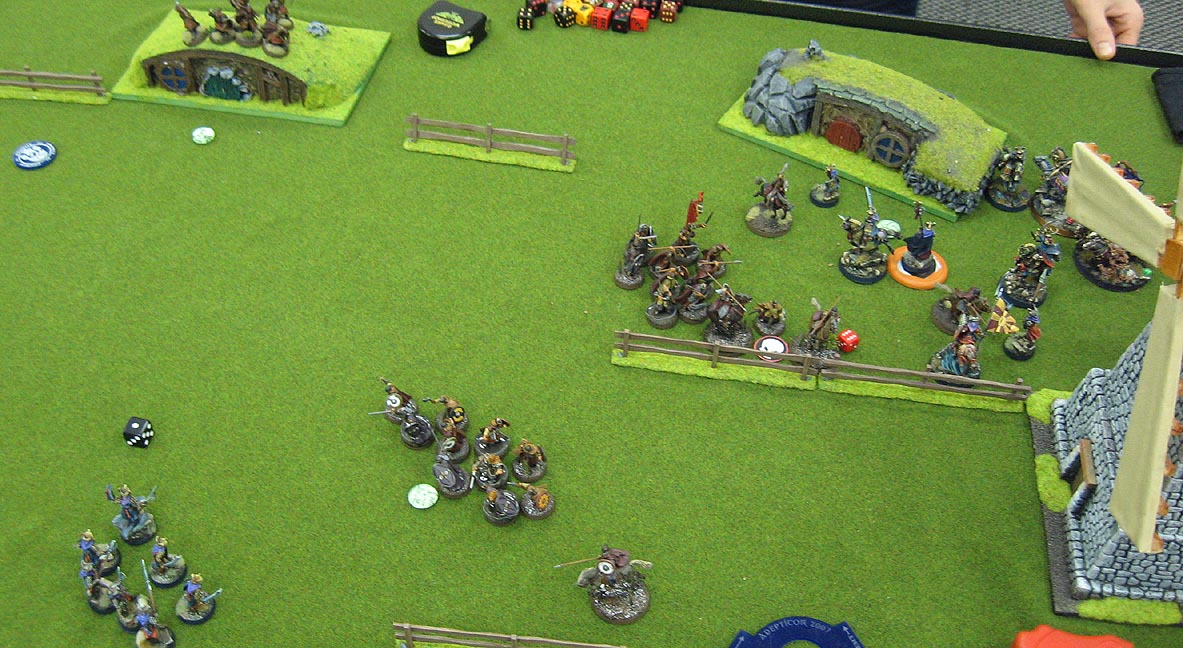 Well, as we now know, I was definitely not.  Neither were these chaps, who must have liked the shiny rock. 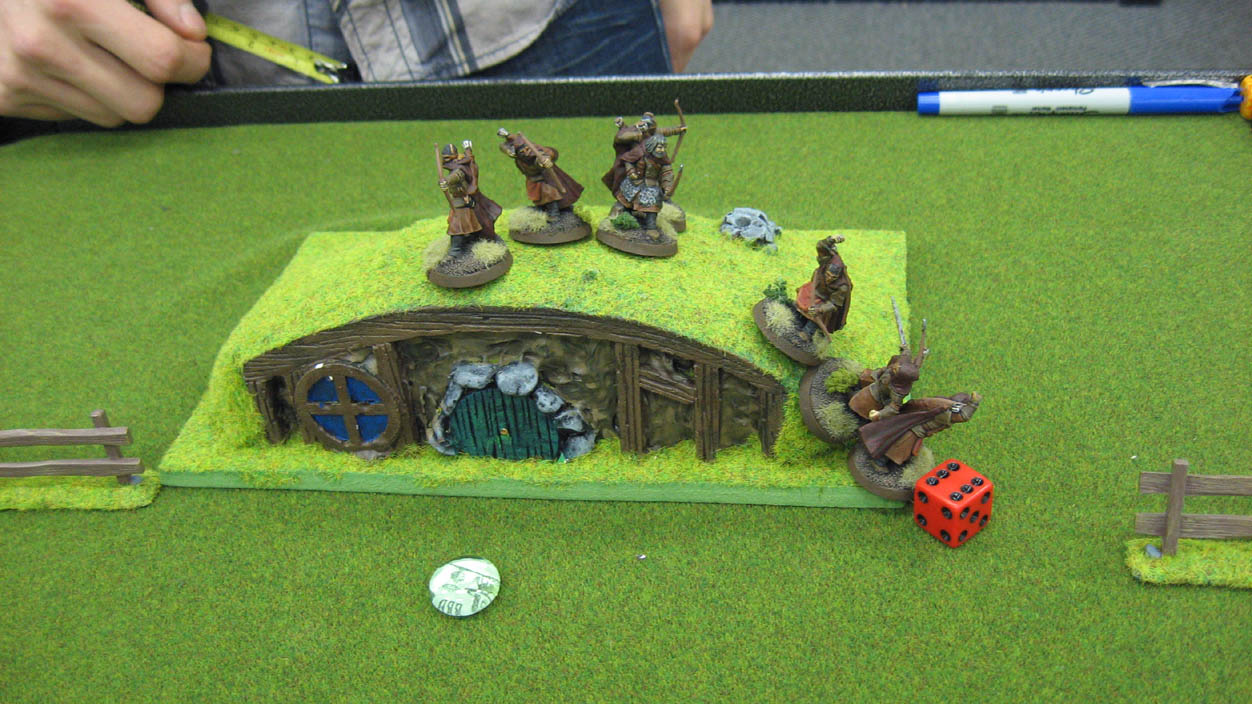 Some more standard Rohan infantry join the fight with my cav and chariots, which pinned me in due to repeated loss of priority.  I do manage to keep killing cavalry, but not enough to get a break point in range... 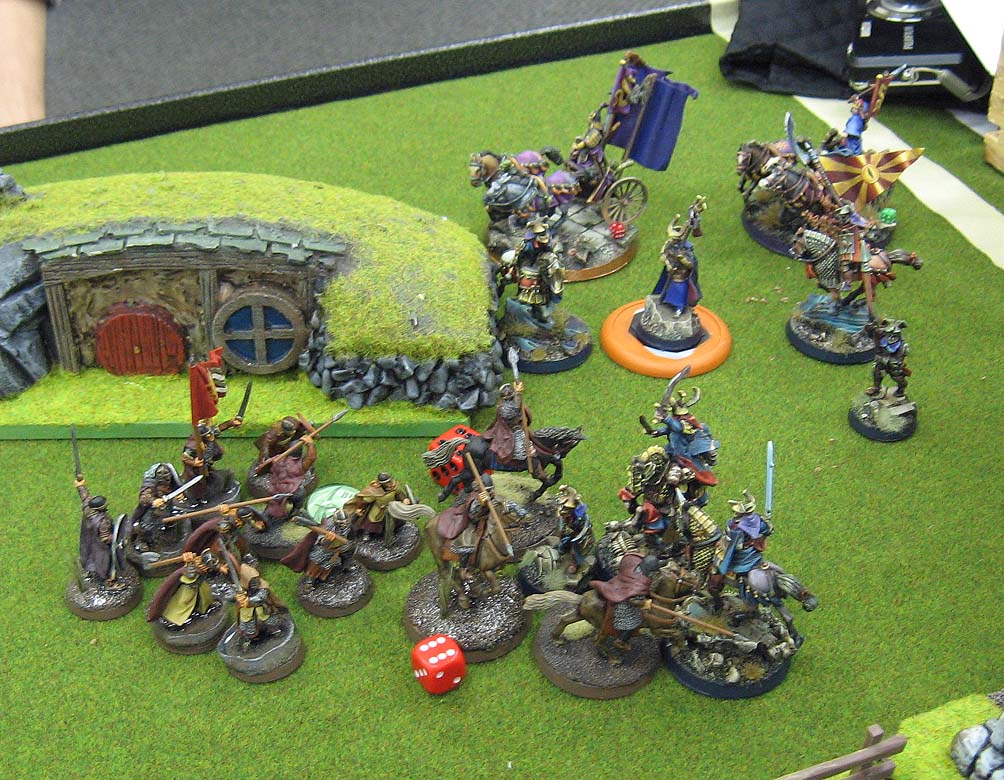 Since the archers were either shooting at chariots or moving toward the objective, I moved out a bunch of my Black Dragon infantry to contest the center objective.  I figured that they could survive long enough to tie things up over there.

This is where my misunderstanding of "contesting" hurt.  I thought that I only needed to get a guy or two next to each one to 'contest'.  That's great for 40k, not so much for LOTR.  This meant that I was not only going to be outnumbered at almost all the objectives, but I was sending out individuals when I should have just kept them in bigger groups to win objectives. 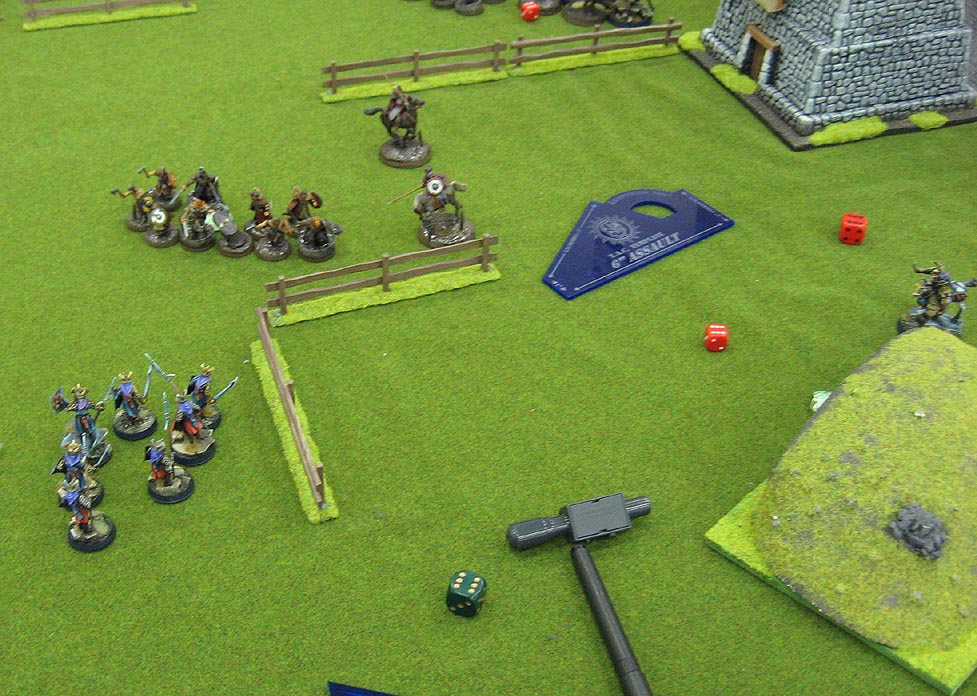 The fights continue over here, but I still can't get to the infantry... 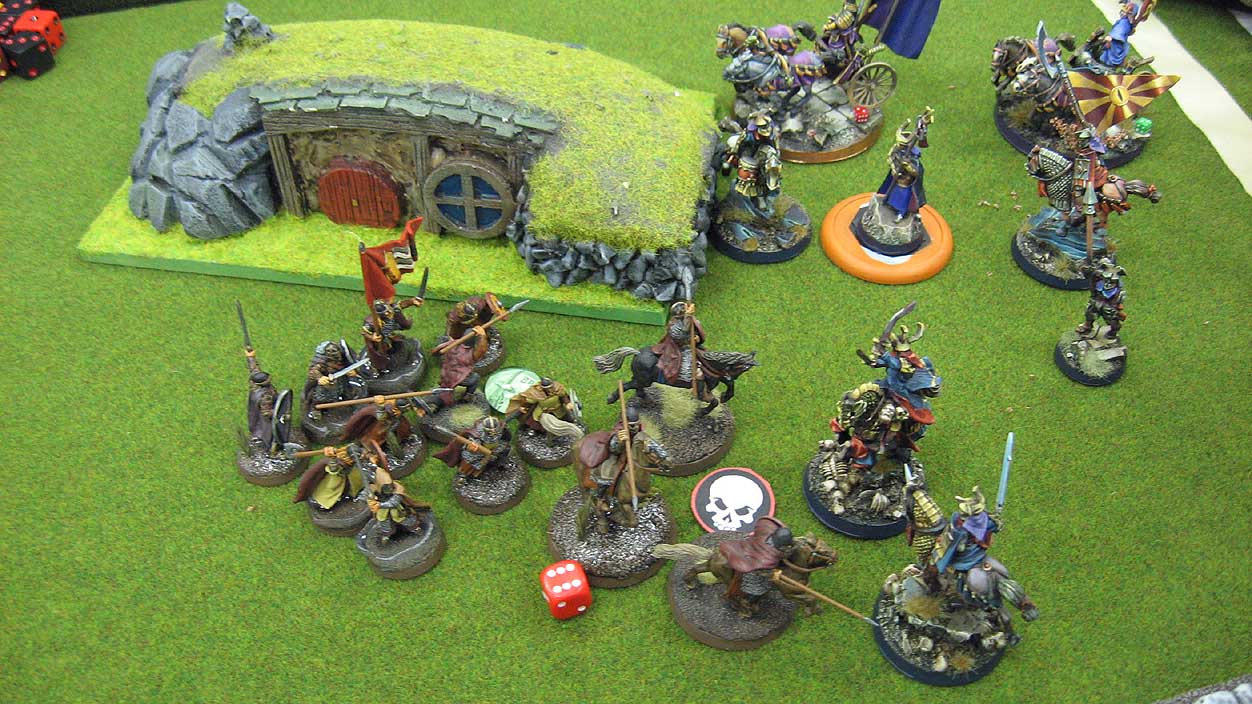 The fights in the center don't go horribly for me, considering that I was outnumbered and facing the Rohan General!  Let's just say that I shielded with just about every guy every turn, including the captain.  The idea was to get 4 attacks back, even if I was badly outnumbered.  My defense 7 and fate point really helped here! 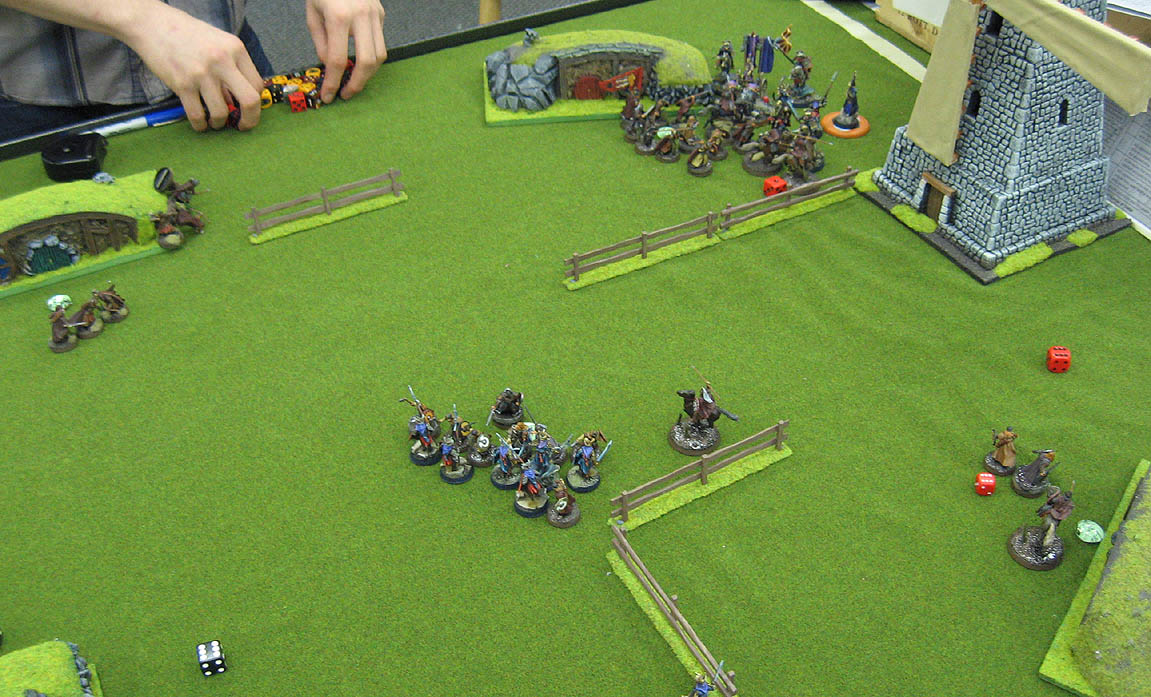 I kill off what is left of the Riders here, and even get into the infantry.  It would be to little, too late, since the game was about to end. 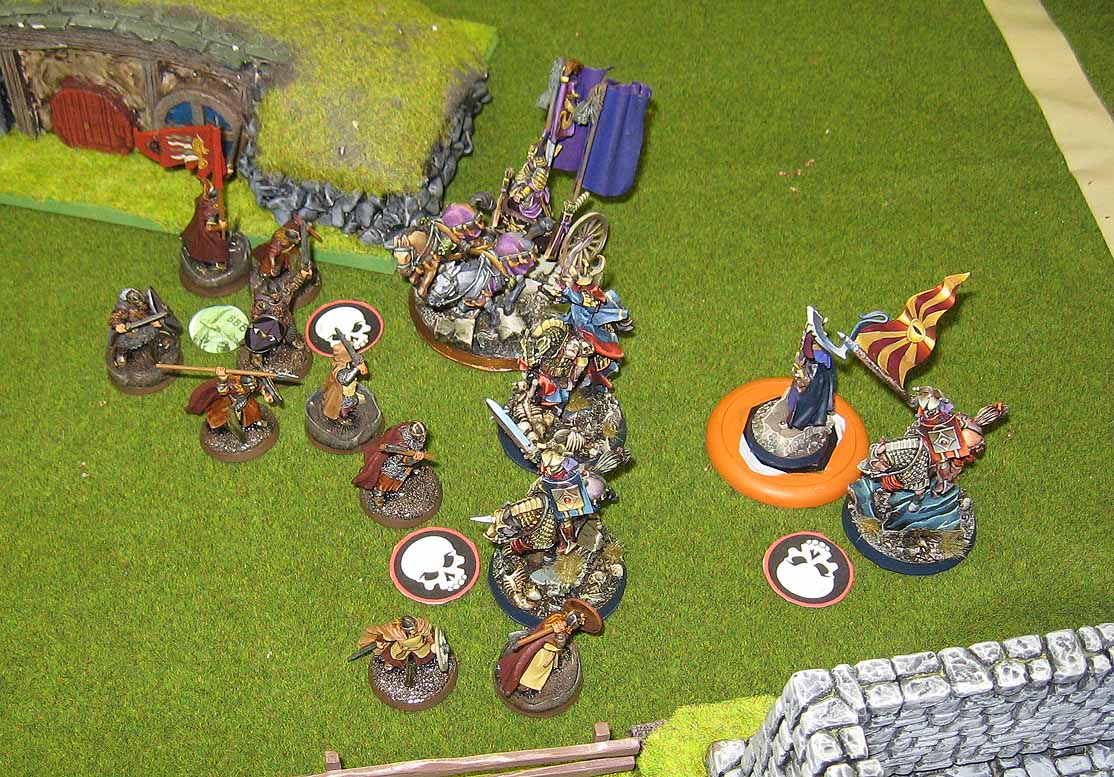 The same thing here around the center objective.  Given what I was facing (even cavalry charges!) my troops did quite a job to stick around.  However, Rohan would have more figures around the objective than me, spelling my doom. 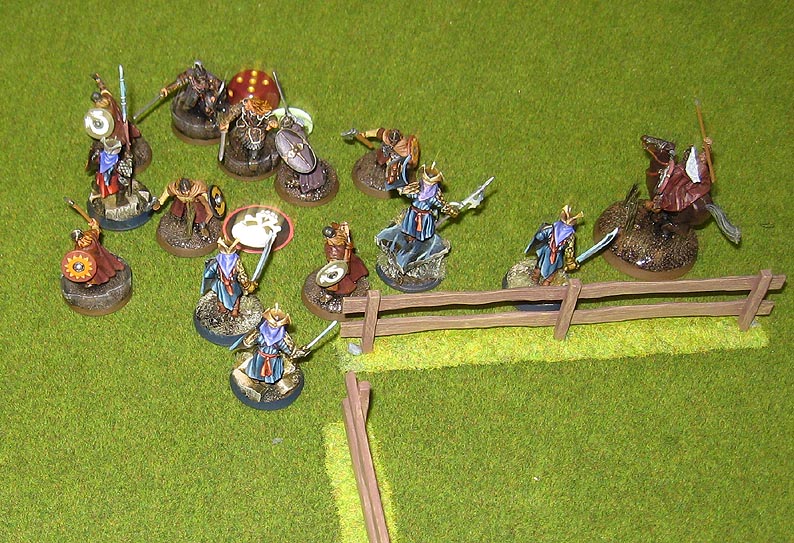 So, A frustrating loss in this first match.  I would draw that same bonus mission card in the next 4 games, so at least I would not repeat that mistake again! :-)  Ironically, my opponents would also have that same duel of champions card.

By the way, my opponent here is a very talented chef, who made some fantastic eats that would keep me going for the rest of the day.  My compliments to the chef.

Next up, my Knights of the Blood Rose face off against Uruk-kai!