Why does it have to be snakes? Again. 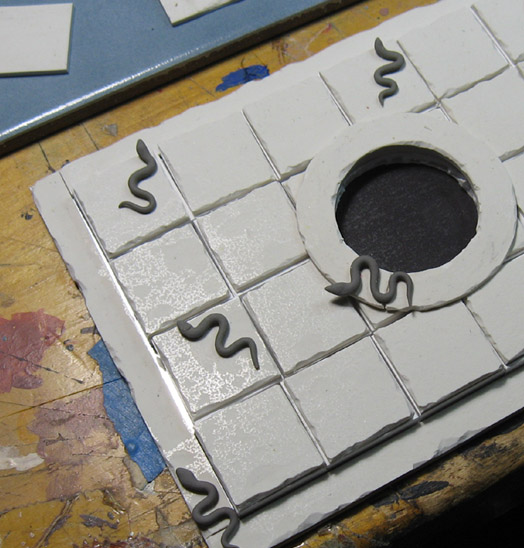 We continue with the bases and movement tray for Kroak's Temple Guard unit.

By this point, I had glued the pieces of sculpey to the foam core pieces.  I also cut the 'edging' pieces, and glued those as well. 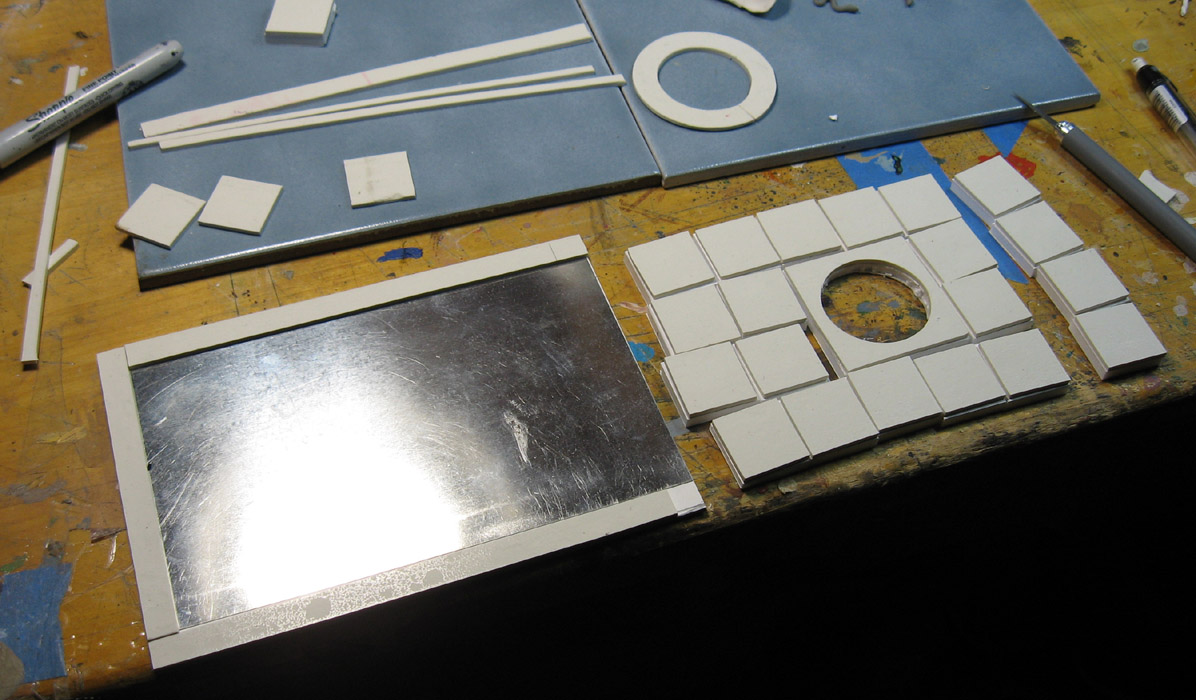 With all the edge pieces glued in, I made sure that all the individual bases fit OK. 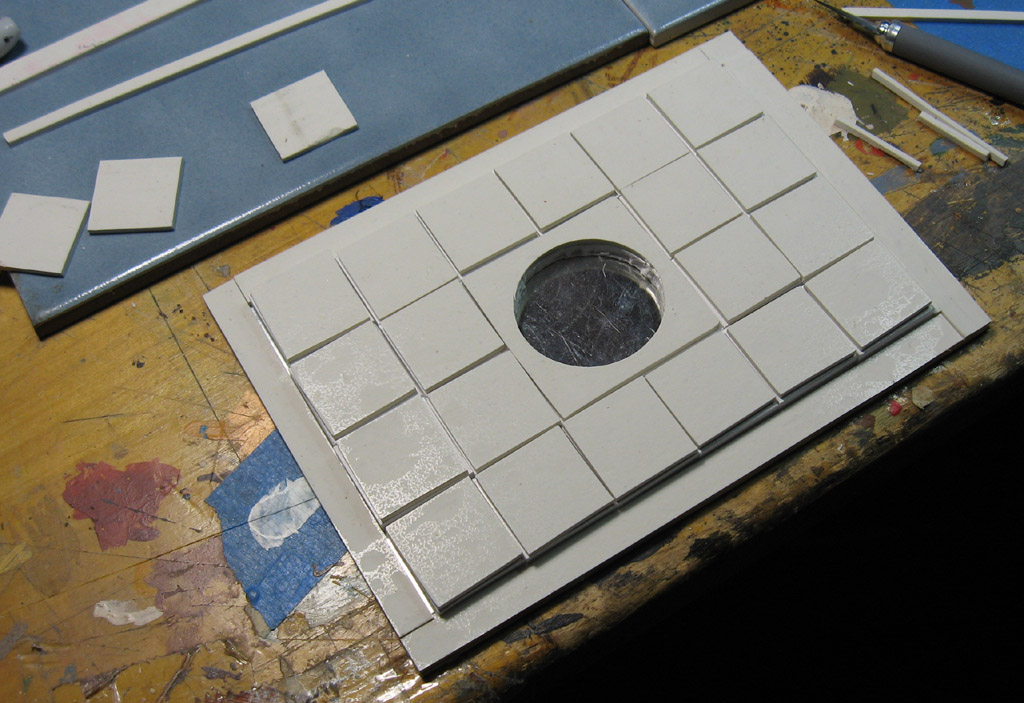 Once I knew that all those bases were where they should be, I placed the ring around the Sacrificial Pit.  This pit will be filled mostly with the chopped up body parts and skulls from Secret Weapon.  I think I will be tossing in some Empire heads as well for good measure! 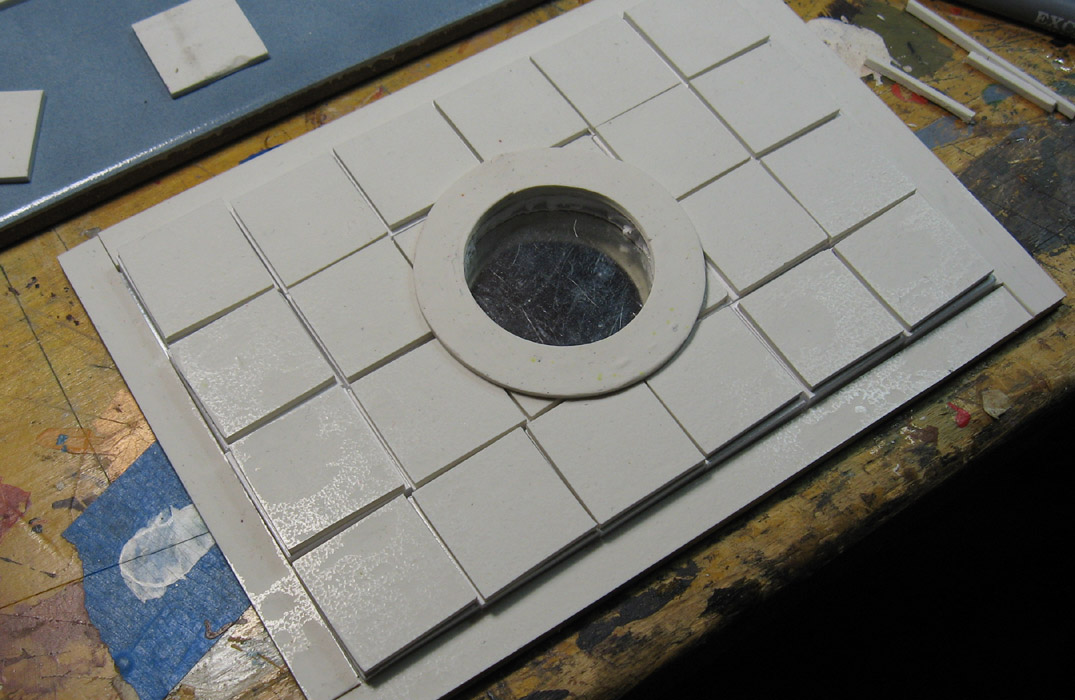 I started to do some preliminary 'ageing' of the edges on the bases.  I didn't get too crazy with this, since I wanted to make sure the designs would have plenty of space! 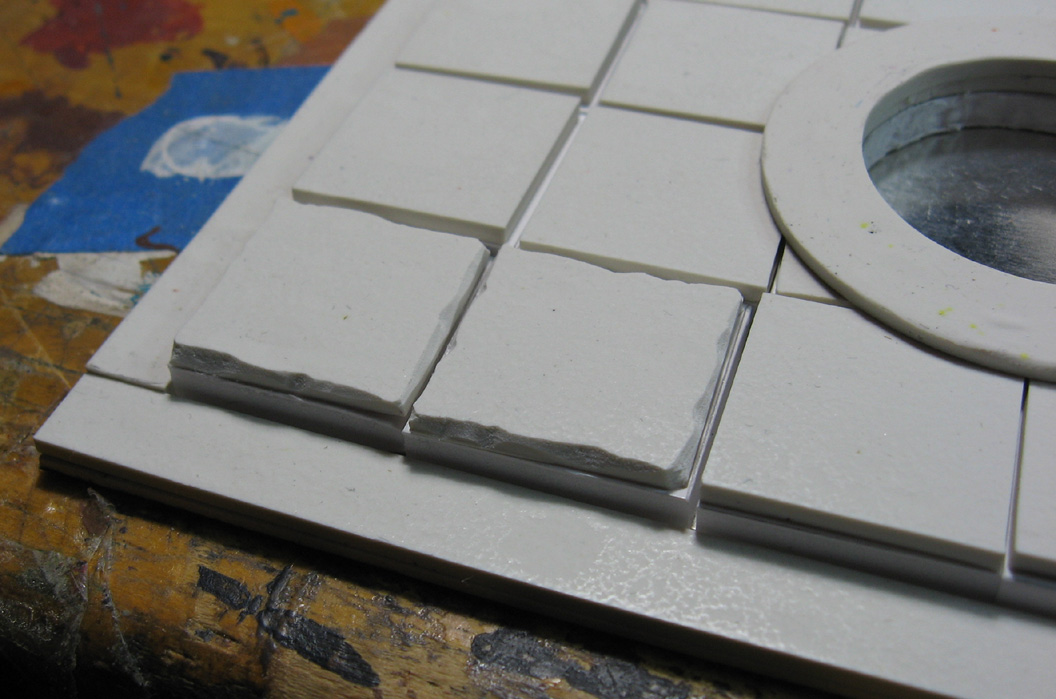 Soon all the bases had been aged around the corners. 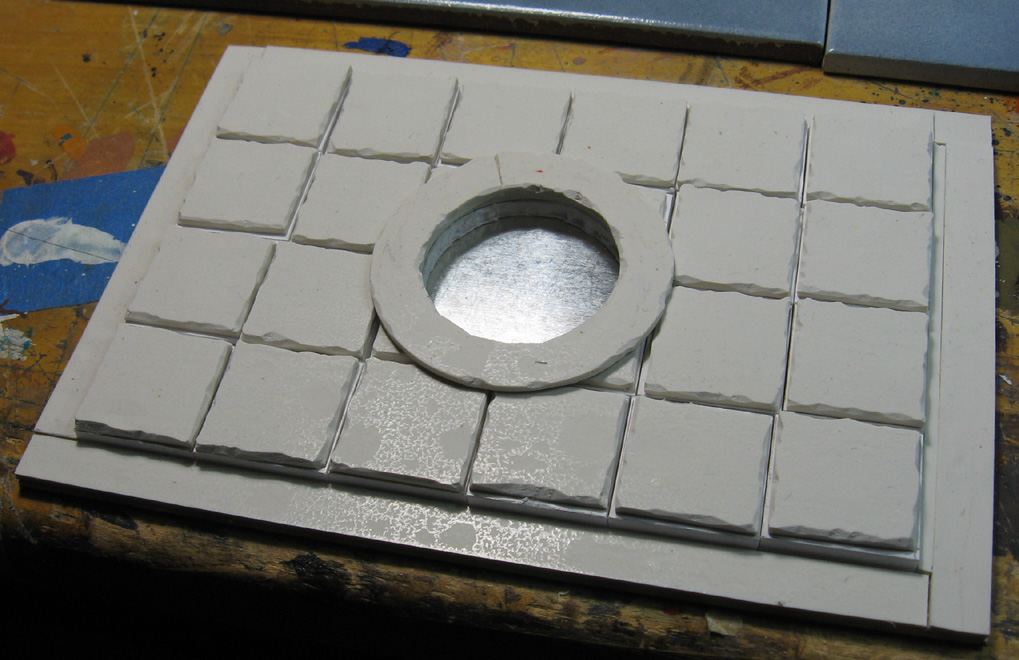 There will be designs radiating out from the central pit.  You can see the sheet metal through the hole cut for the pit. 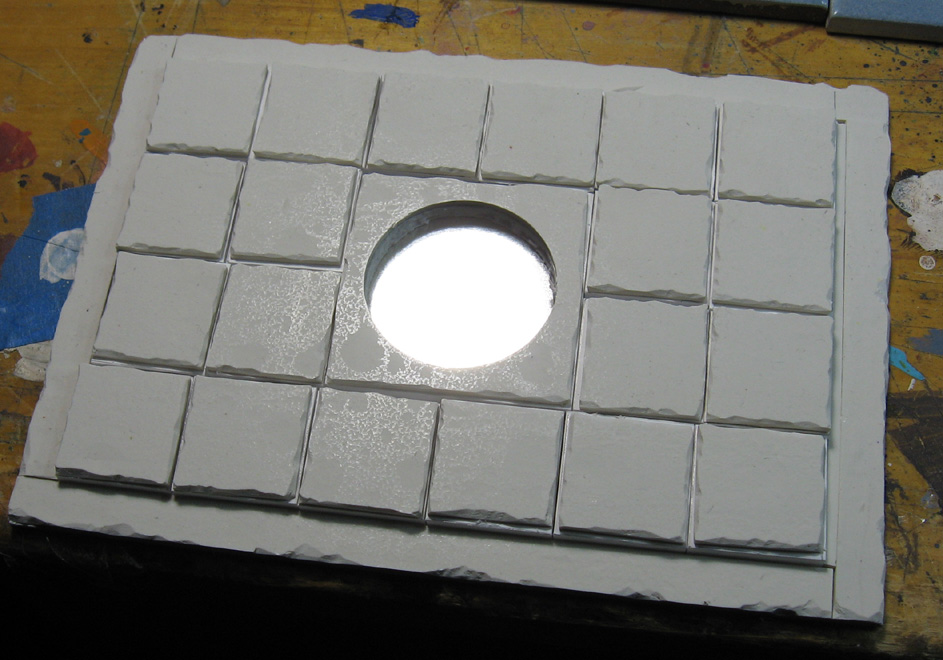 I am hoping to have four snake heads emerge from the four cardinal directions that go all the way out to the edge pieces... 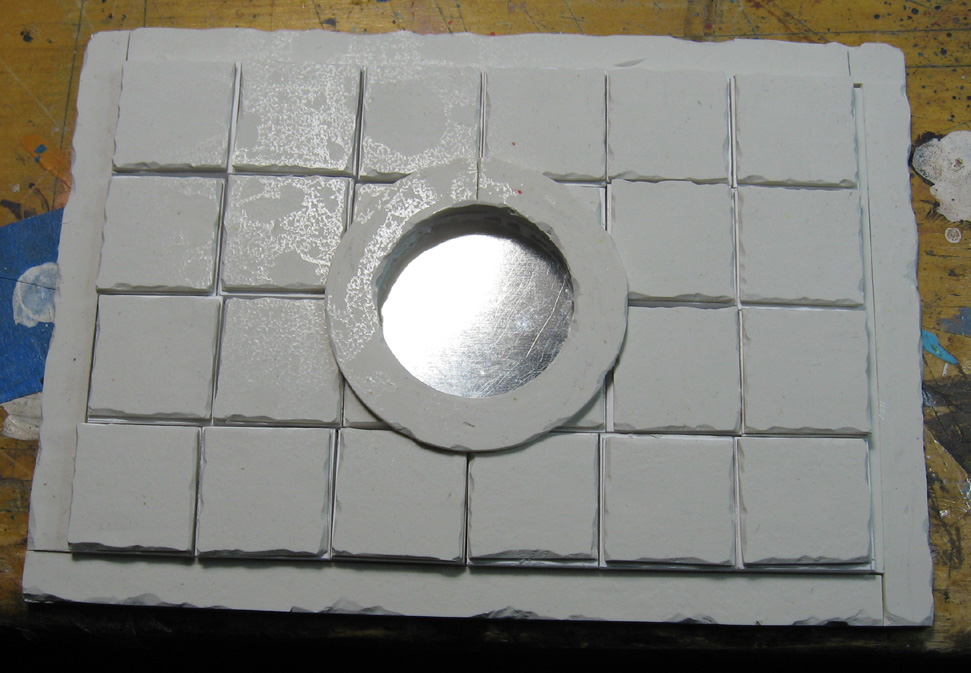 Time to magnetize these bases!  Out come the refrigerator magnets. 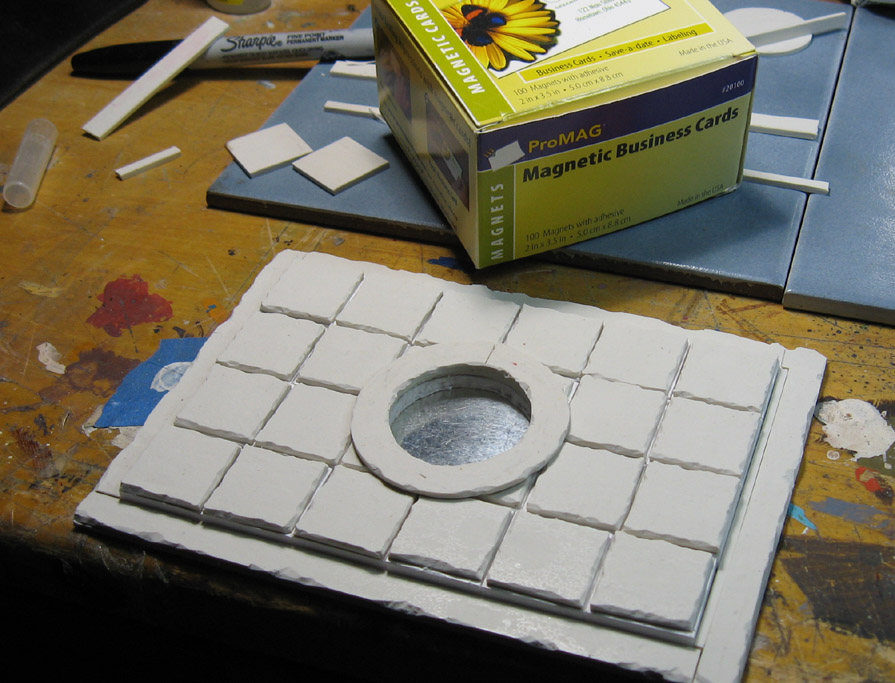 Each base gets a magnet.  Next they will get numbers. 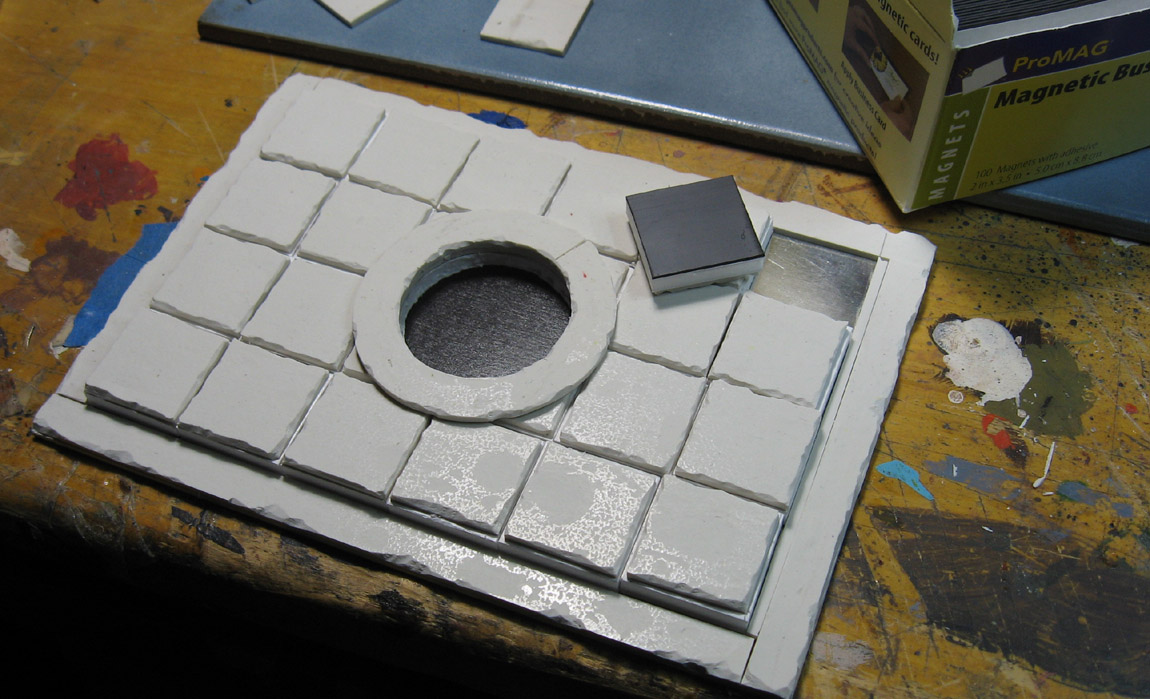 Remember the little snakes from the last post?  Here they are! 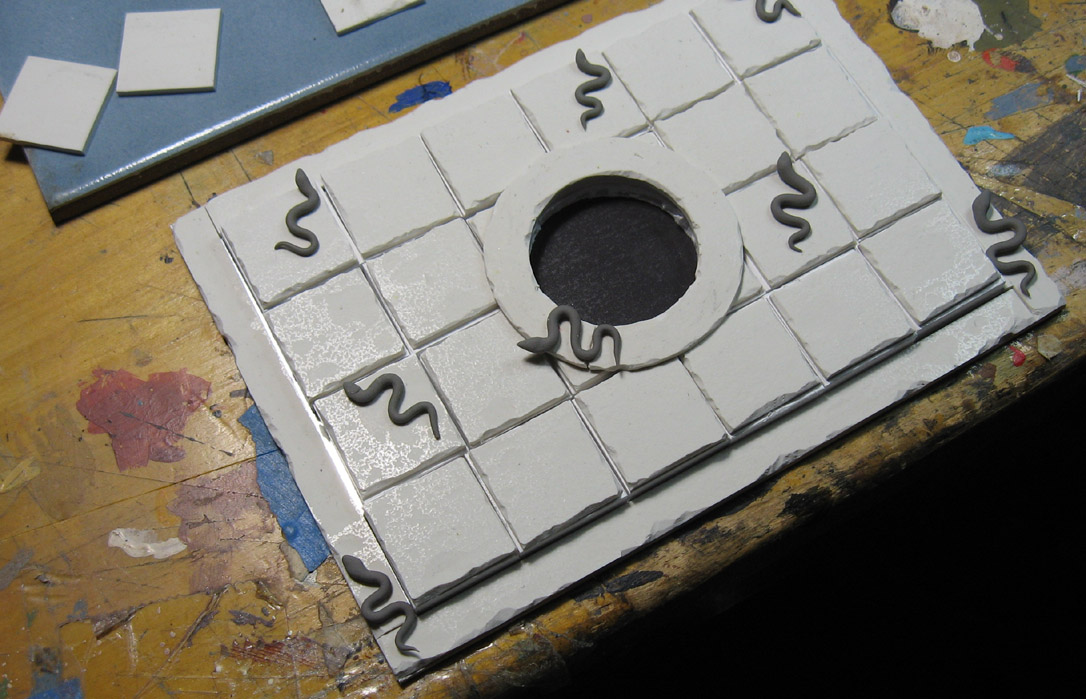 Stay tuned for the Pit filler and the designs being carved into the bases!

Posted by wappellious at 6:07 PM 3 comments: 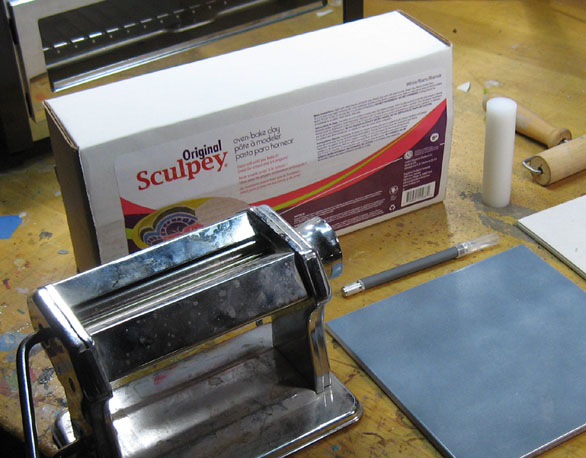 I needed to film a new segment on Baking sculpey for the basing videos, which meant rolling out lots of new sculpey. 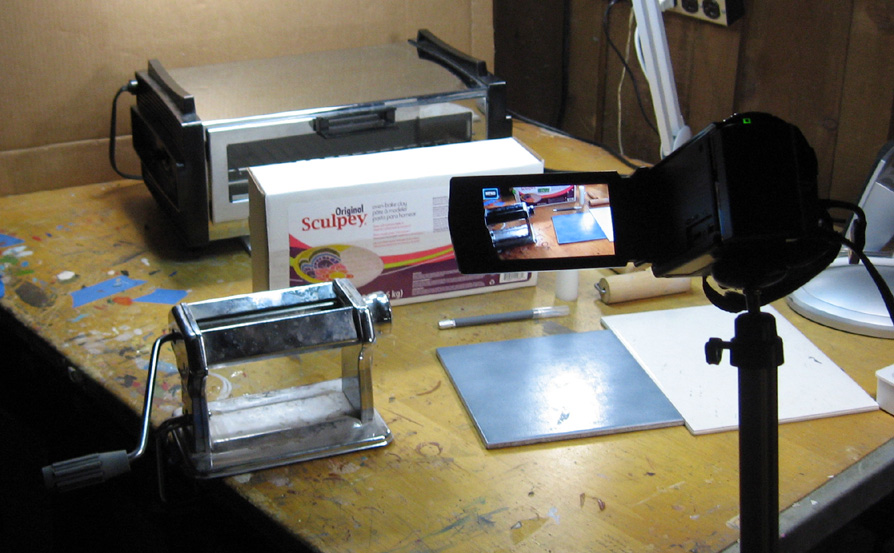 Since I did not want to simply roll out a pound of sculpey without much additional purpose, I tried to gear it towards current projects.  Among these was the new experiment with more unified movement trays for fantasy units.

In this case, it was the new Kroak/Temple Guard unit. 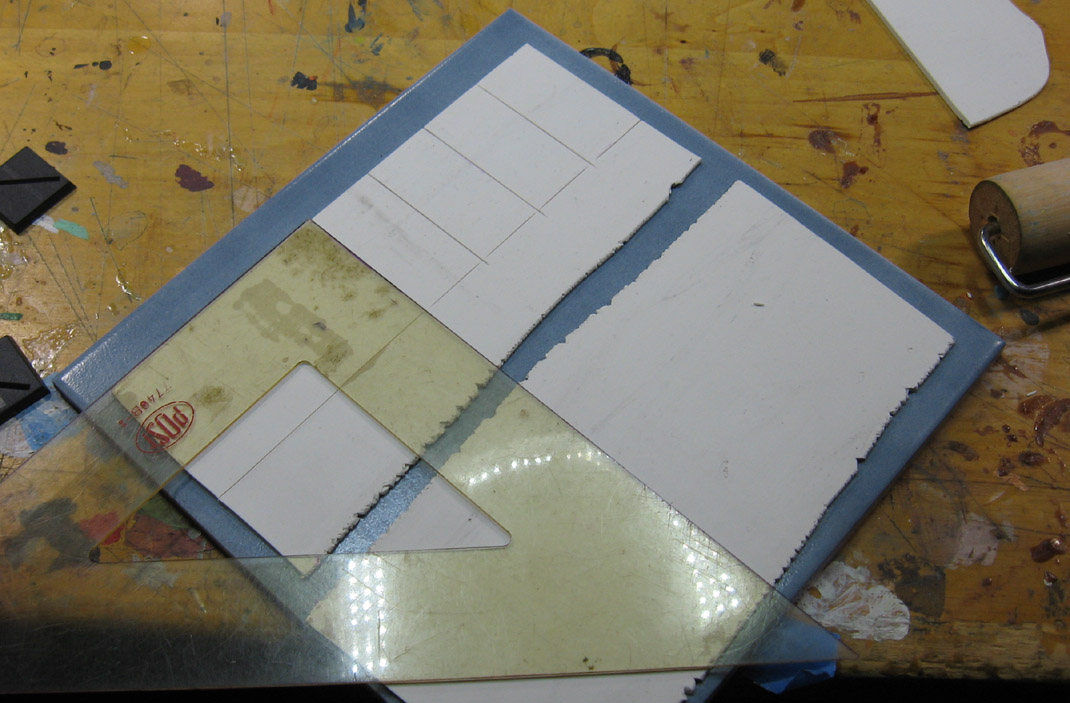 The concept it to have Kroak's Palanquin floating above a sacrificial pit.  The pit would be located right in the center of the unit. 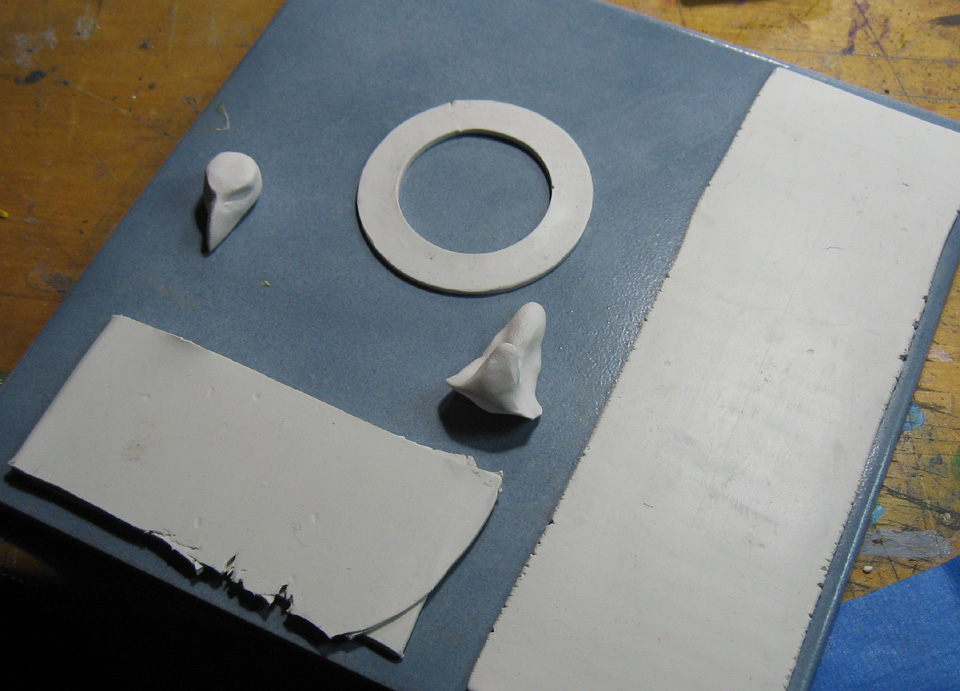 There would be significant obstacles to deal with, not the least of which is how tricky it can be to get Lizardman infantry of any kind to rank up.  I had to abandon the original plan to have multiple levels to the unit.

The bases would all have to be the same height. 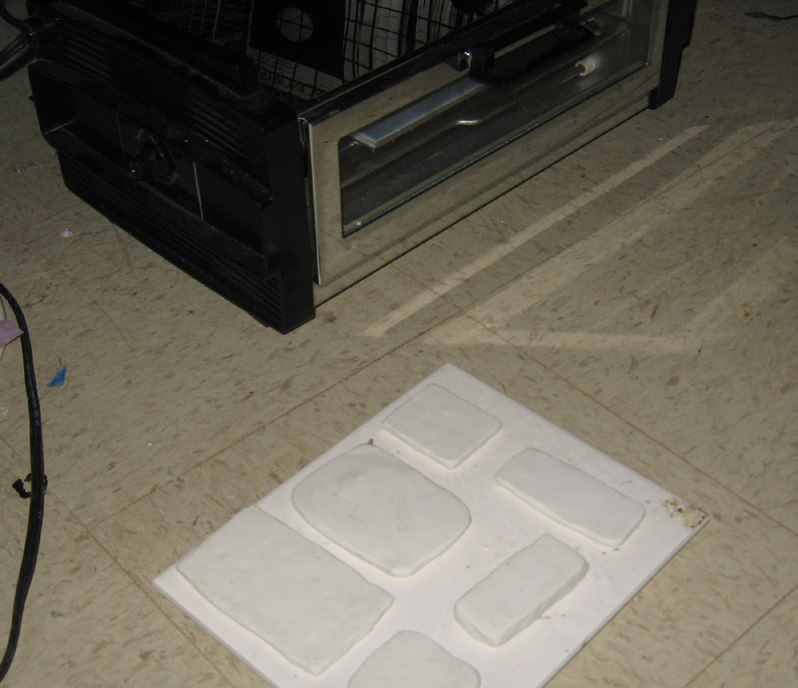 So, I cut out a bunch of 25mm bases in the unbaked sculpey.  I also made the cutout for the pit on Kroak's base, and a bunch of snakes to put out around the movement tray for extra effect. 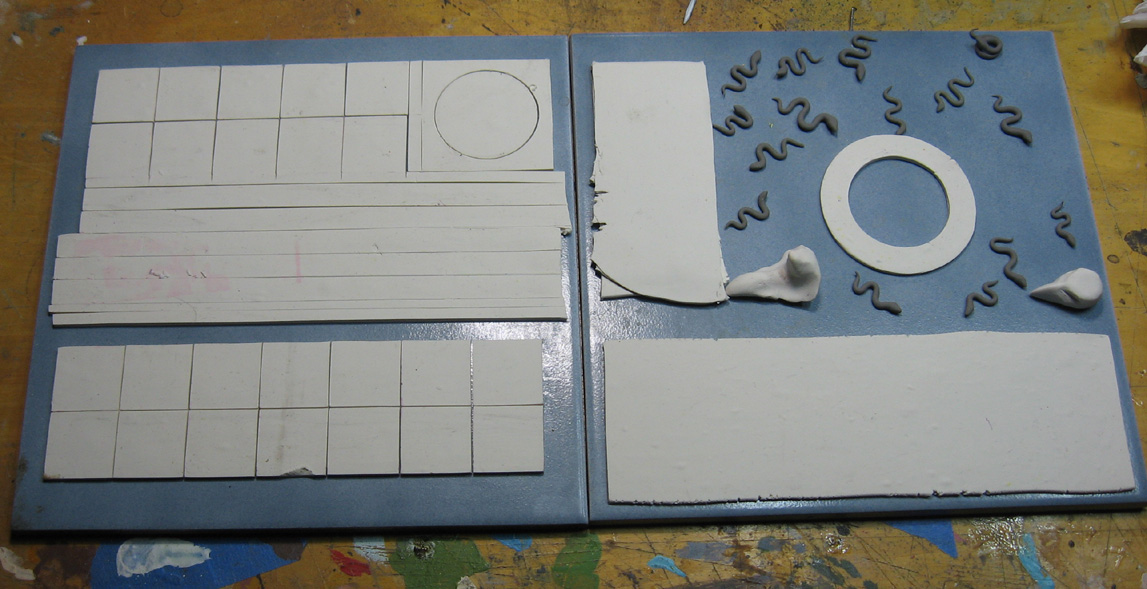 Once that was baked, I cut some foam core pieces which would give a little bit of height to the bases... hopefully just enough to make the pit viable. 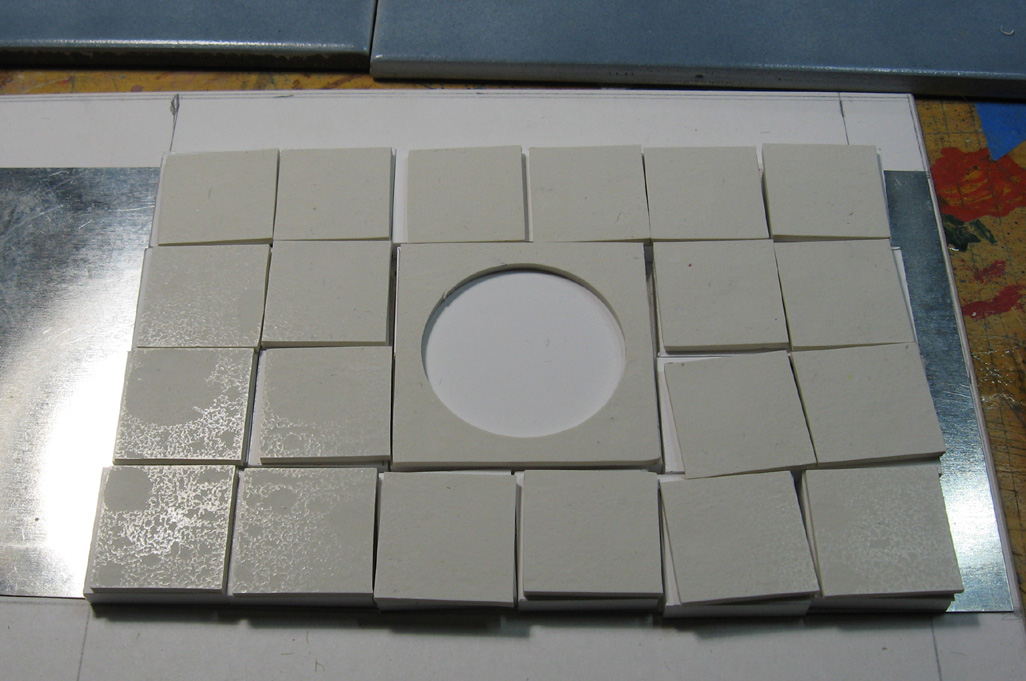 The baked sculpey pieces were set out on the foamcore, and the hole for the pit was cut.  The shiny surface you see is the sheet metal used to attract the refrigerator magnets. 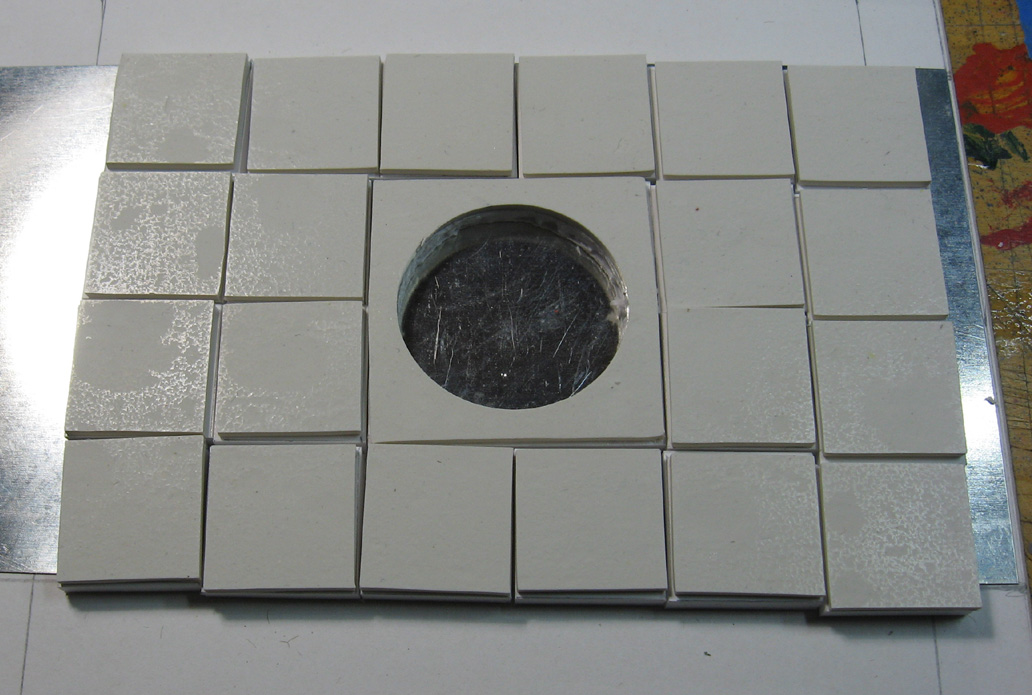 In the next part of this post, I will show some images of the weathering and magnetization of the bases and how the rest of the movement tray is formed.  Stay tuned!

Posted by wappellious at 5:01 AM 4 comments: