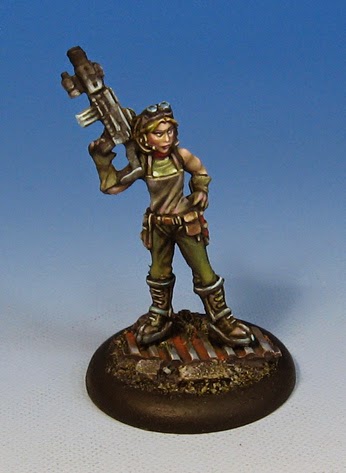 Yet another fun Reaper BONES mini!

I think she's looking to roast some Zombies with that torch of hers...

Cathy already has a character sheet made of for this lady, so now she can run around toasting some brain gobblers!

She joins her fellow zombie hunters, who are also BONES minis. 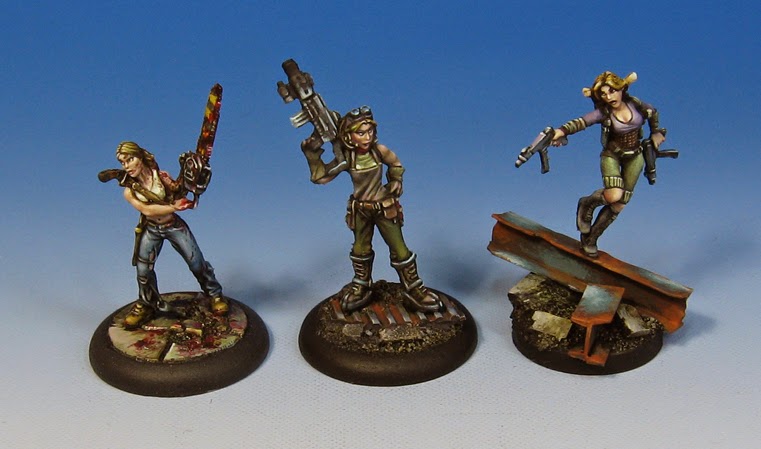 Posted by wappellious at 11:39 PM No comments:

Seeing double...Hell in the skies 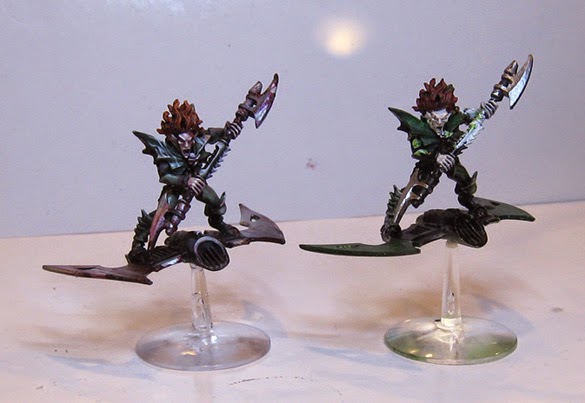 So, when we last left our reclaimed Hellion, the process of glazing had been well under way, and the process of working the midtones had begun.  In addition to the metals, I reworked those all important midtones on the armor as well. 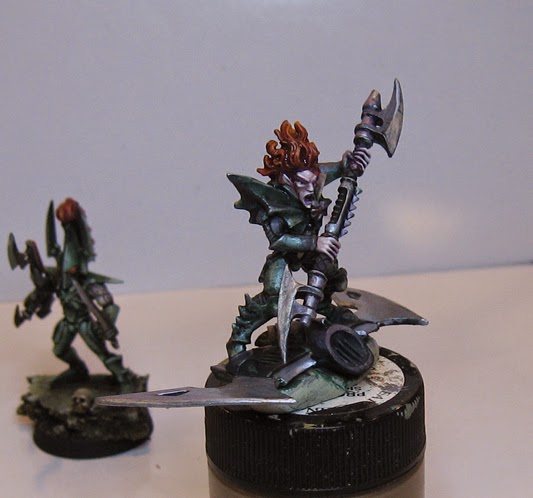 With all of that work complete... it was time to have some fun with blood!!!  Out came the Water Effects, so that some nice blobs of gore could be placed on the wings and blades of the weapon. 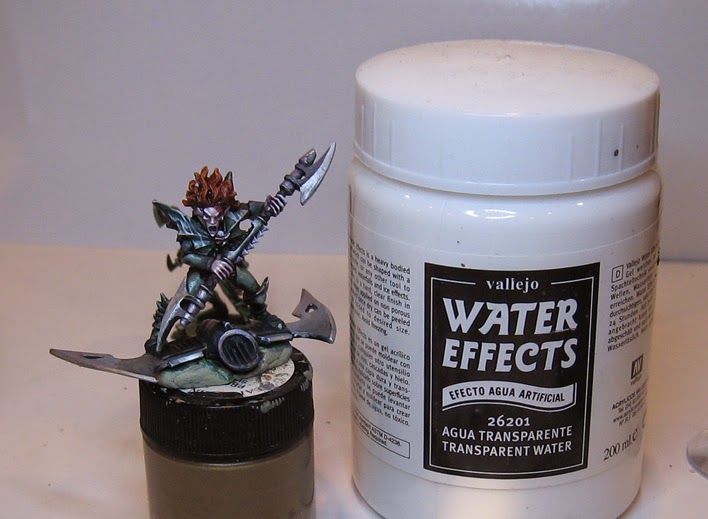 This shot demonstrates how the blob is placed on the wing, and then 'pulled' back along the wing with a liner brush. 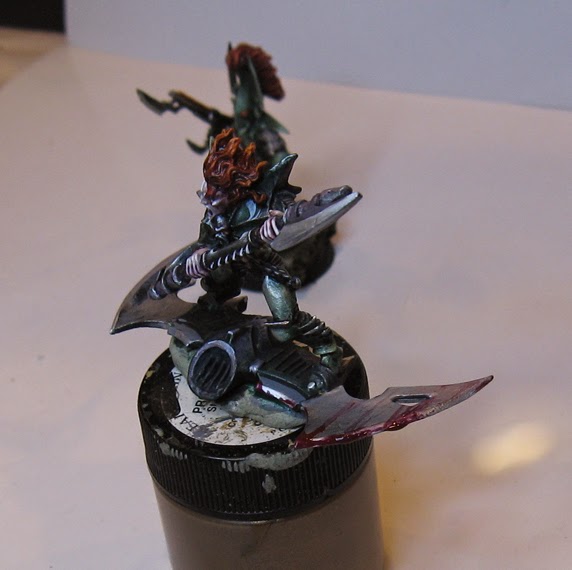 The palette shows the mix.  You can see the Water Effects, along with a variety of reds.  Some are lighter, others more purple or even black.

Those darker shades will be placed over the initial lighter (and somewhat more transparent) applications. 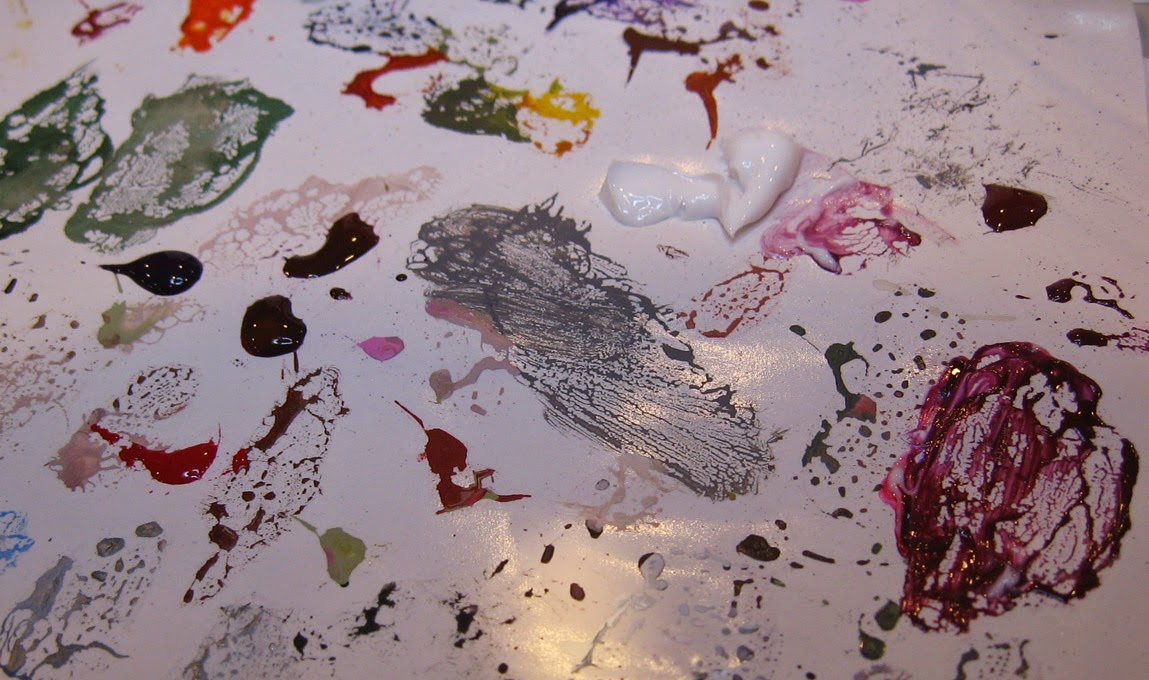 Here are some views to show you the overall appearance.  You can even take your fingers to smear that water effects/paint mix across the broad surface of those wings.

Some side by side comparison shots for you!

It was pretty shocking to see the difference that 75 minutes could make. :-) 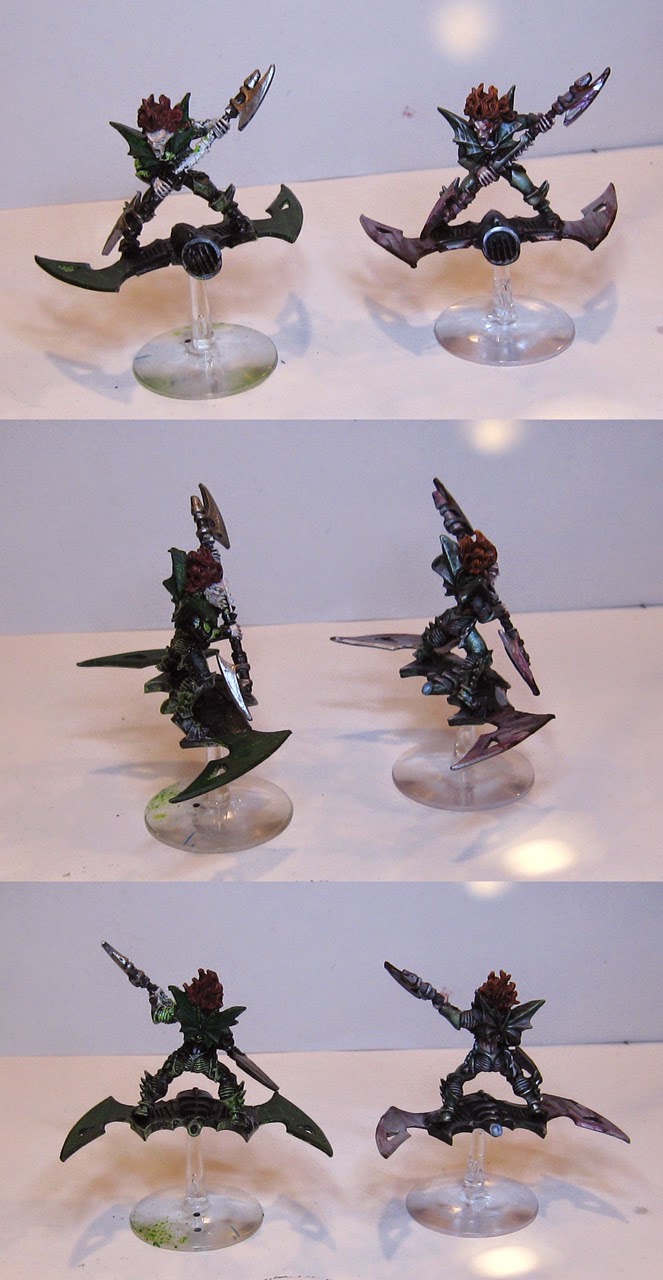 With minimal effort, the same ancient metal figure is given new life.  Yes, it's not super fancy.  Were this my own, you know that I would do more elaborate stuff.  However, the idea here was to create something that could be replicated on a mass scale with relative ease. 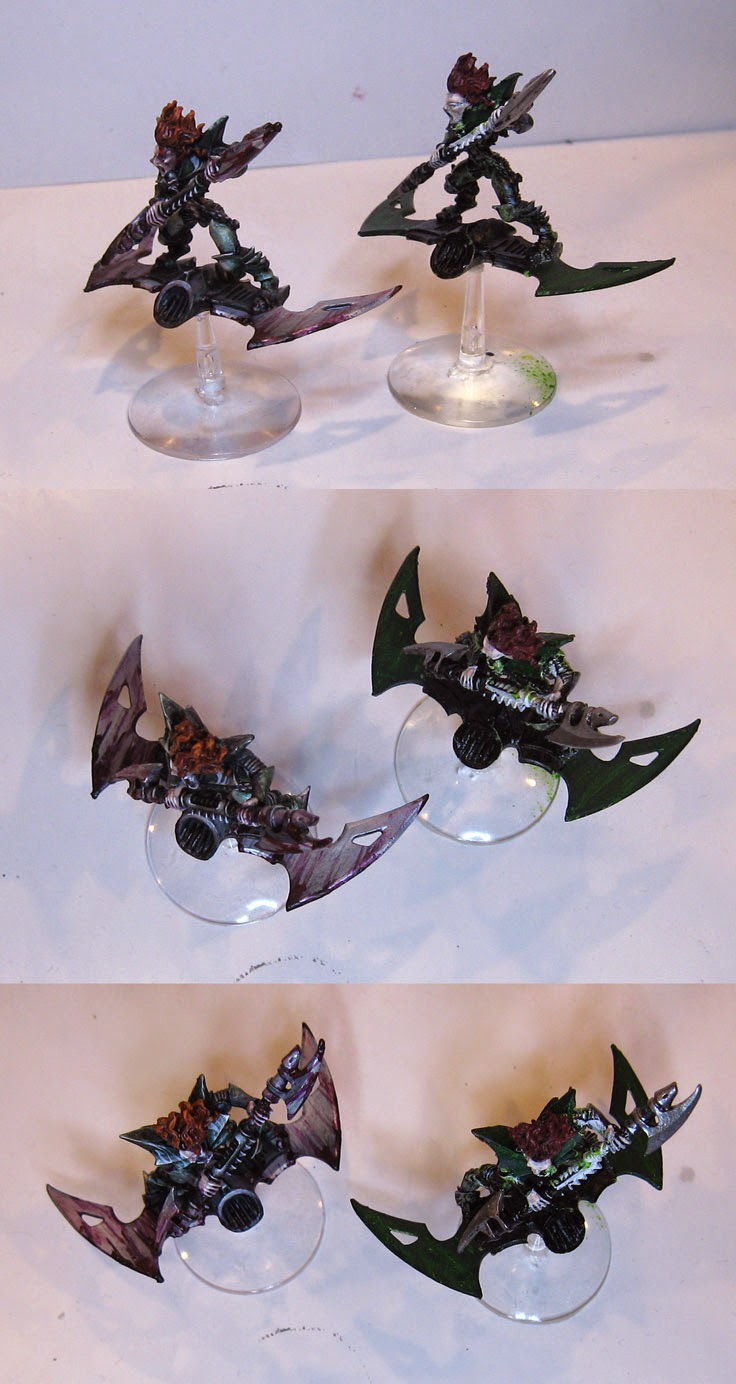 The Hellion painting is not the only dramatic conclusion that we have in this unique double post!  All the while I worked on the Hellion, Lathan was right next to me hammering out his latest building.  These views will give you a hint at how impressive this structure was. 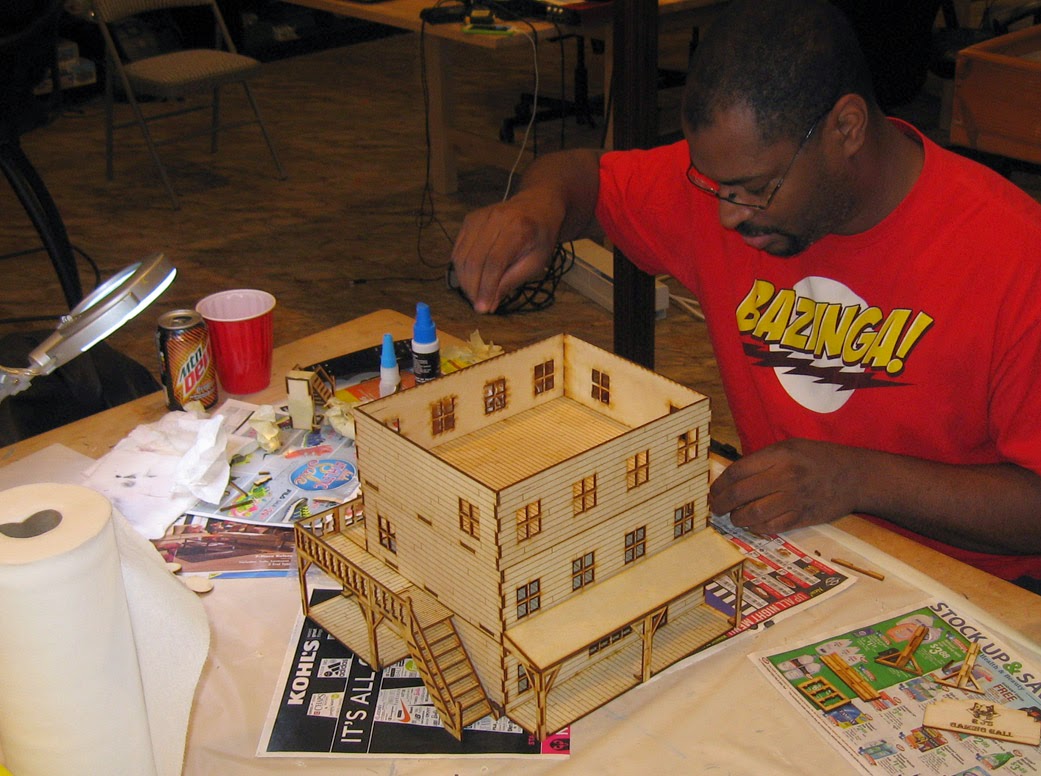 Look at that back porch!  You can see into the building as well, and get a peek at the floors inside.  As I mentioned, the second level has a very fun interior staircase.

This building could host an entire battle all by itself.  Also, you can take off each level, so that you could conduct a fight on the second floor, and so on. 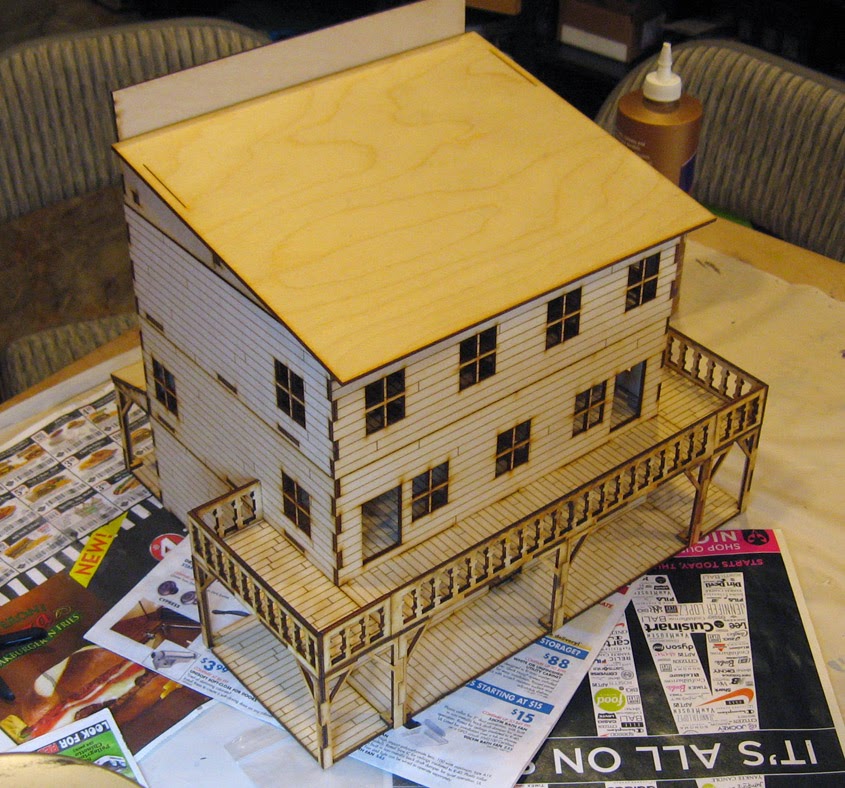 I can't wait to get my hands (and my brushes) on this structure.  These images don't even include some of the other amazing features, as well as all the extras.  When you punch out the pieces, you are left with a host of fantastic bits!

Not only can they be used to enhance the structures, but they could make some fantastic basing materials.  Yes, you will be seeing some of that as well. 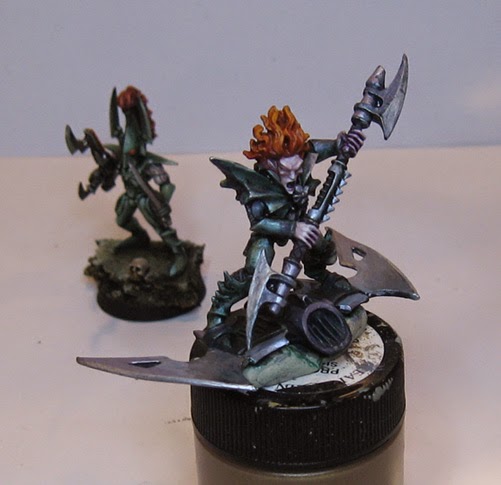 Back to that ancient Dark Eldar army that a friend of mine is attempting to 'reclaim'.

I didn't even know that Hellions were part of the original codex.  I noticed something that looked a bit like one in the case.  The hunk of metal I held in my hand was painted to this level, just like all the Kabalite Warriors. 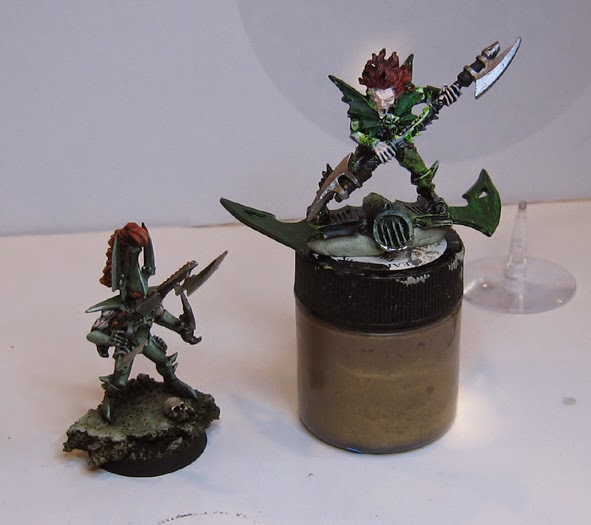 I set down to scraping the mould lines, and then gave it a shot of brush on primer. 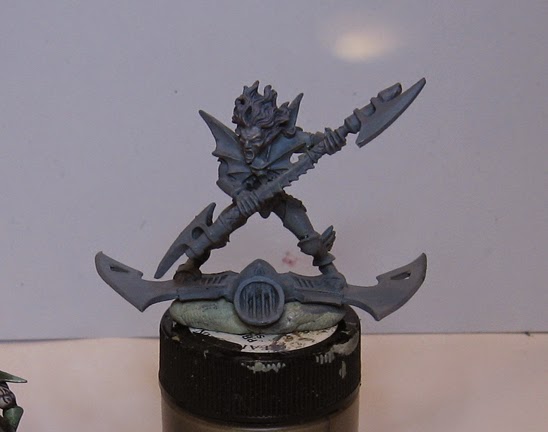 As with the previous reclamation attempt, I tried to keep things simple with the regular green paint mixed with metallics. 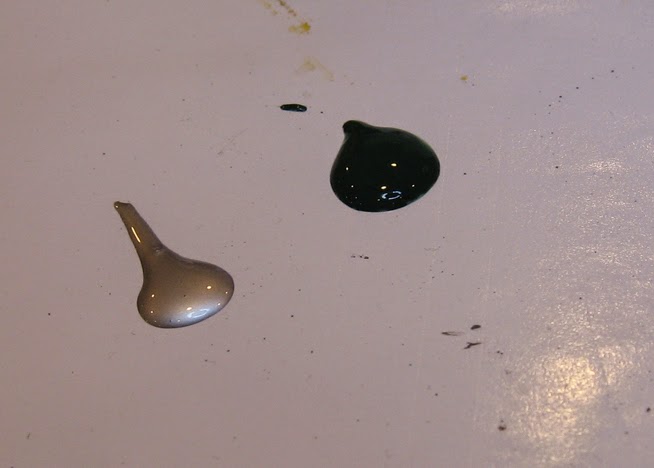 I also wanted the wing blades to be silver, so that I could do some fun blood effects like the versions I did on the bladevanes of my Reaver Jetbikes. 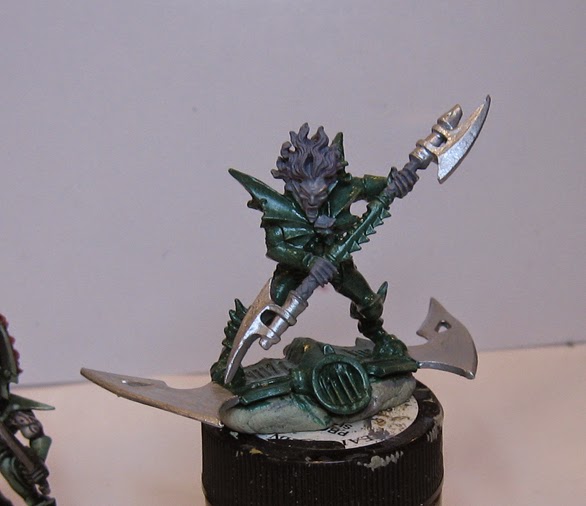 You can see that I lightened up the primary green/silver mix by adding more silver.

Face and hair get their basecoats. 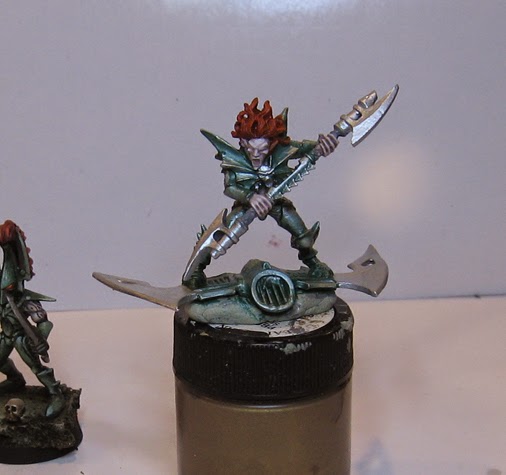 I had a variety of colors out for glazing.  I took a dark purple and green liner paint, adding a bit of Secret Weapon blue black wash here and there. 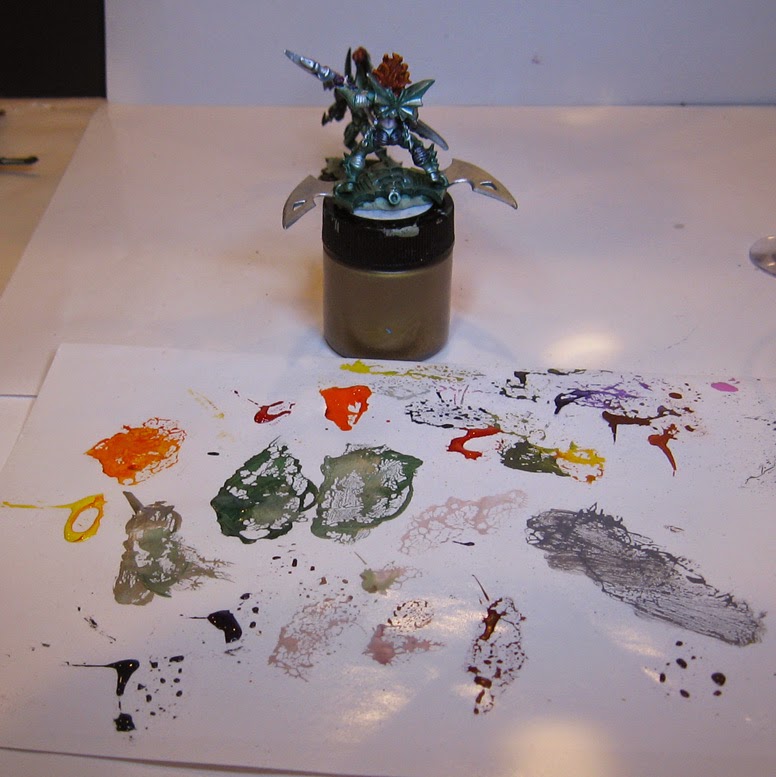 More purple was mixed with the green to create an interesting dark gray wash for the non-armored sections, while much more green went into the mix for the armor. 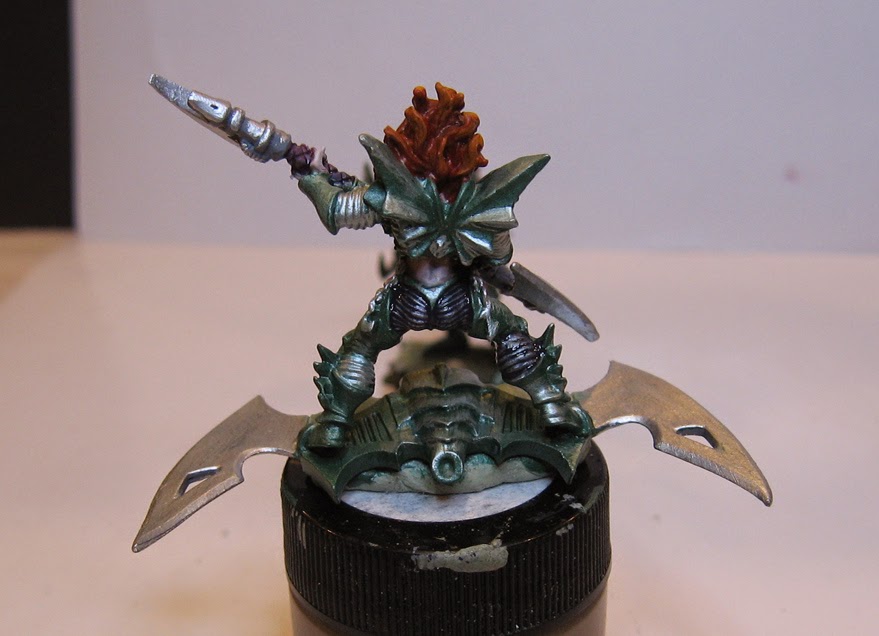 Some of these wash colors were used on the wing blades as well. 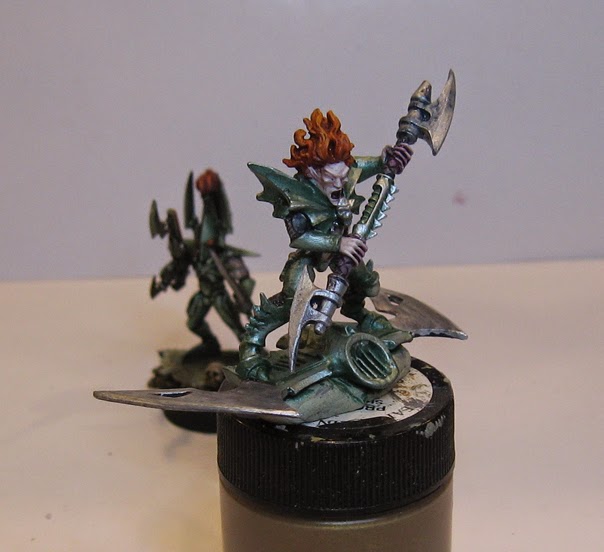 More layers of dark glaze, making sure to do the hair and skin too... 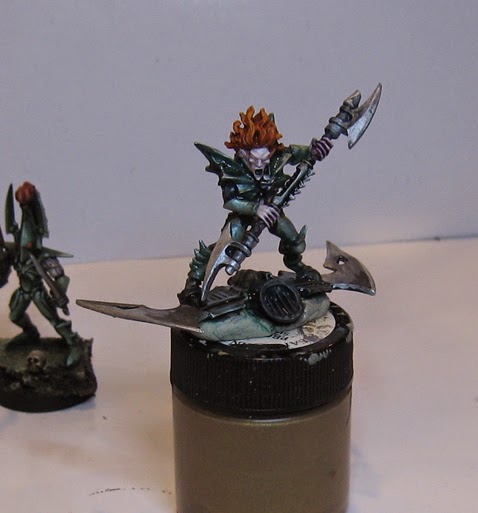 Almost ready to start working back into those mid tones. 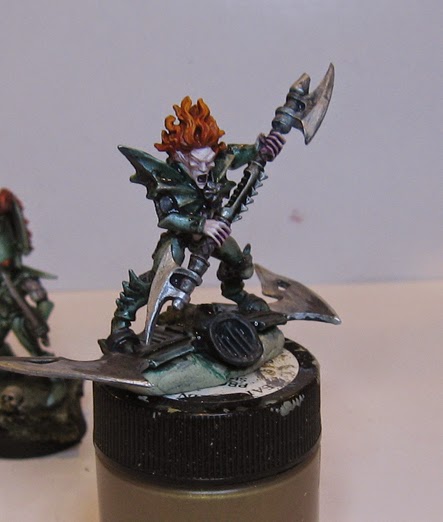 Here you can see some of the colors mixed up in the shading stage of the metals.  A shadow gray style color is mixed with the silver, in order to even things out on the wings. 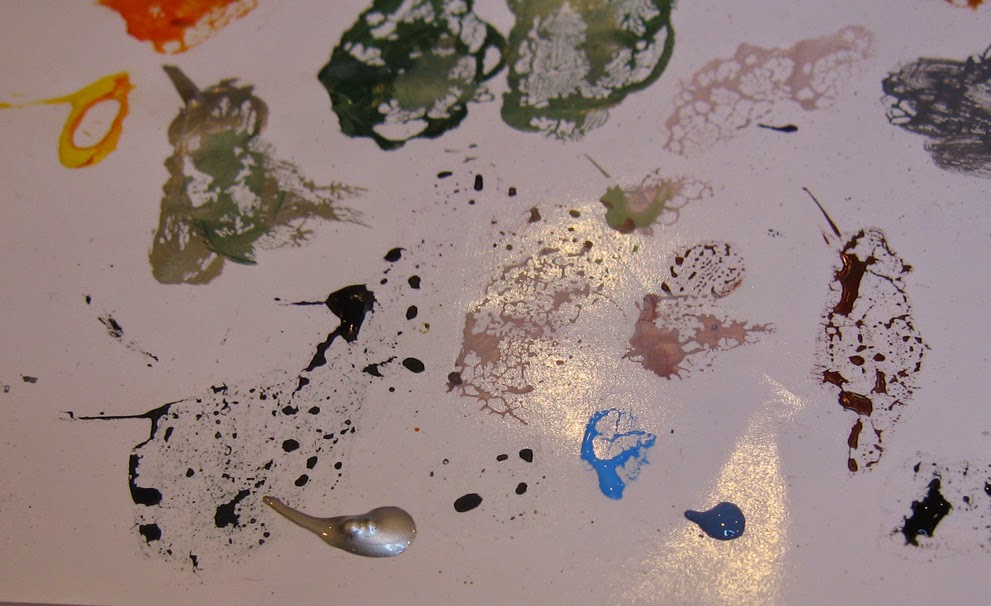 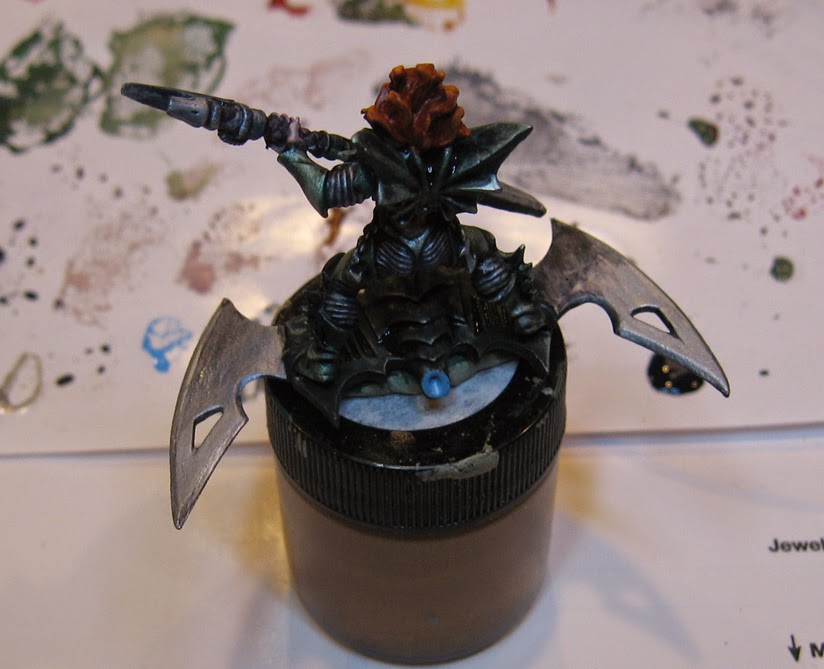 I did this everywhere... the armor, the other wings, the weapon, and so on. 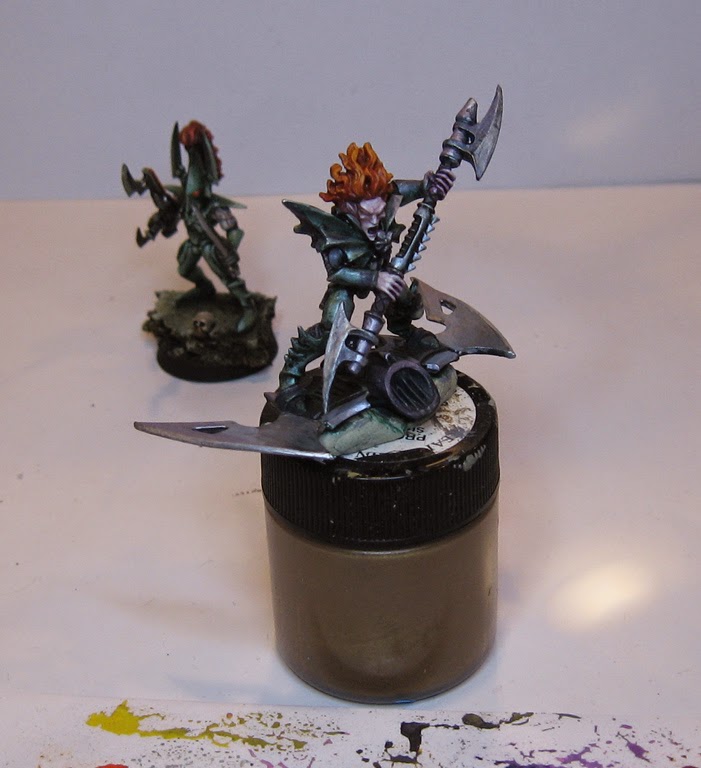 Look who's here!!  It's Lathan from Burn in Designs, working on a brilliant new design.

This is a fantastic three story building with a great interior.  You'll be amazed as I was!  More pictures of that structure along with the rest of the photos of the Hellion Reclamattion Project.  Stay tuned. 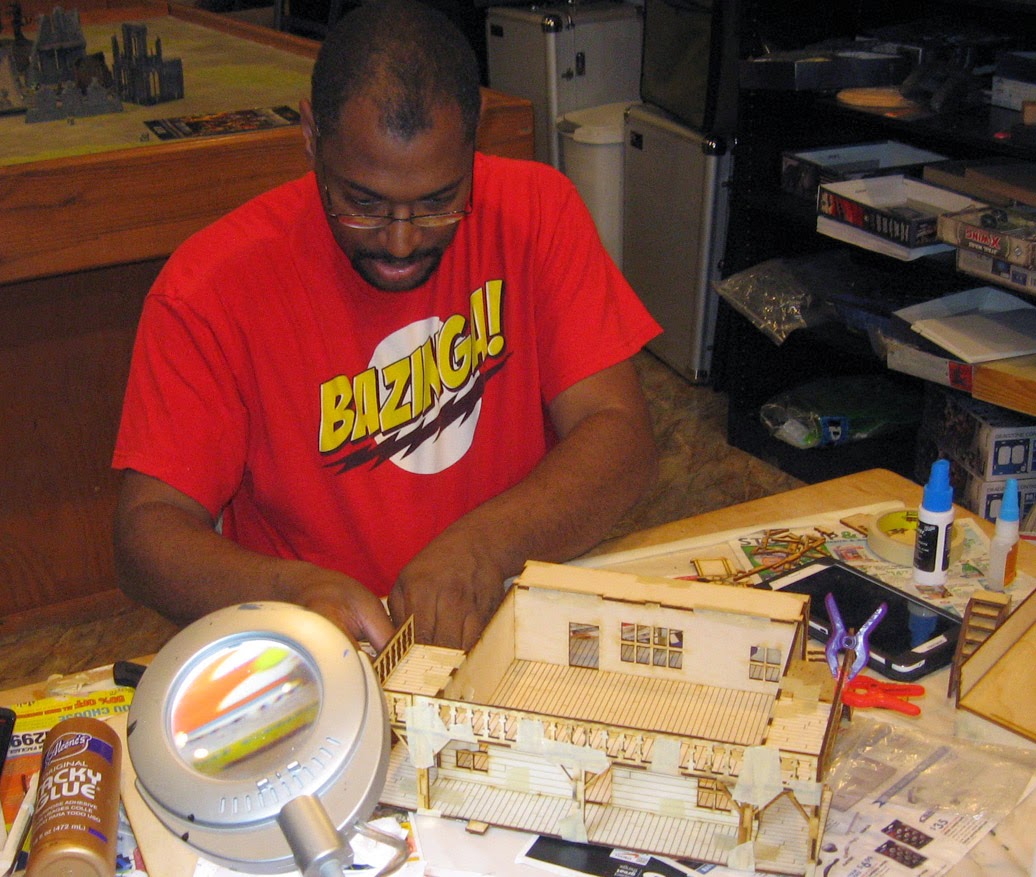