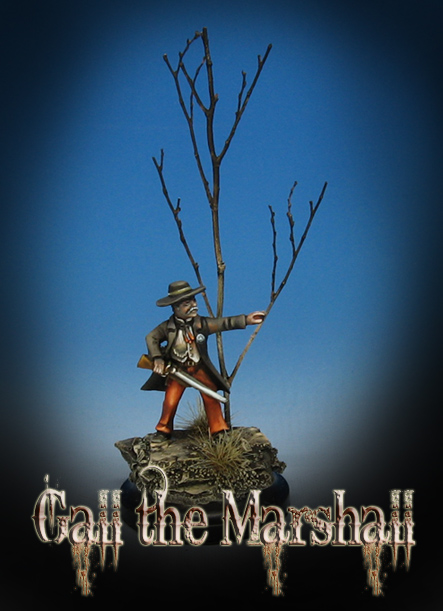 Hey there, partner, where do ya think yer goin' with that big sack 'o cash?  Time to get the Marshall to look into this! 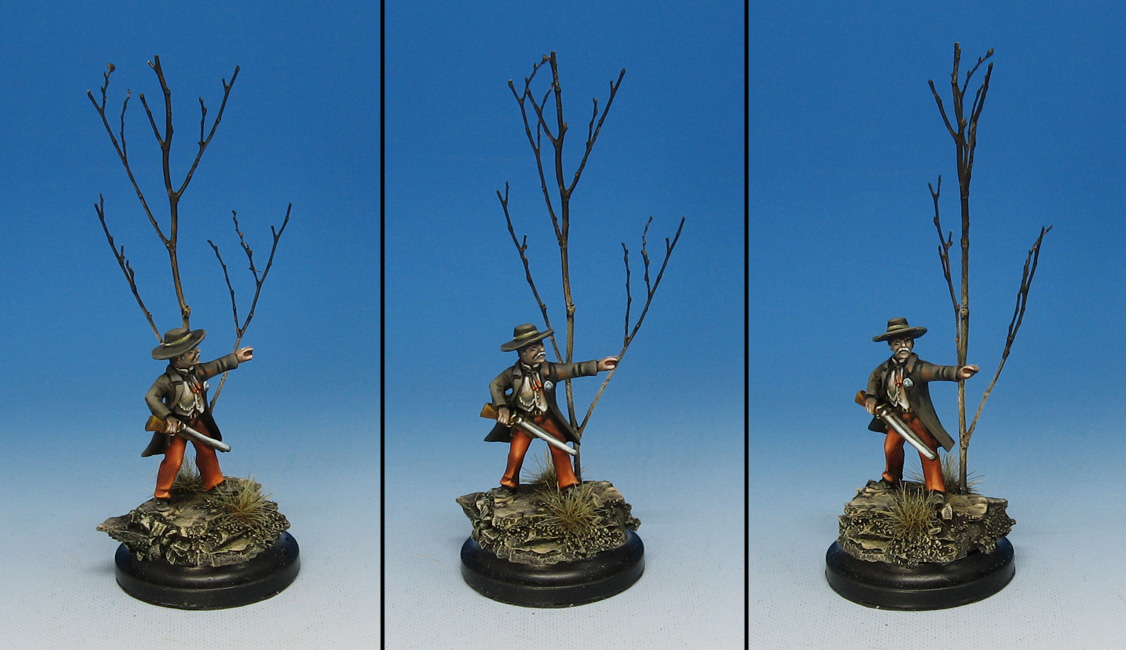 This is one of our original Deadlands figures, which I believe is from Artizan Miniatures. 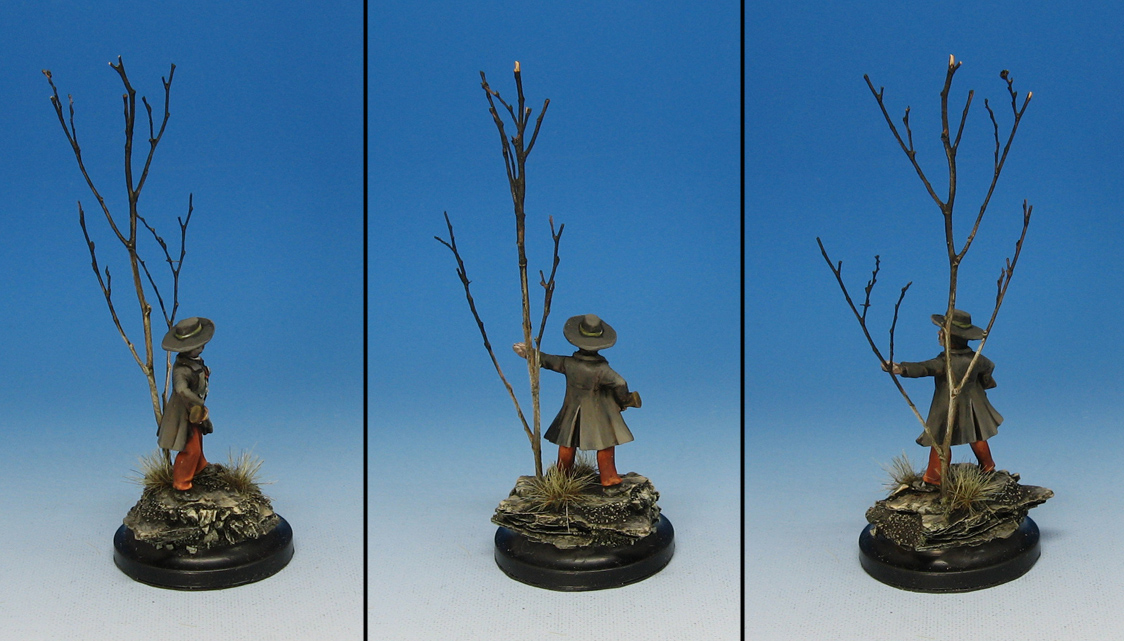 I couldn't resist putting the little tree in the base! 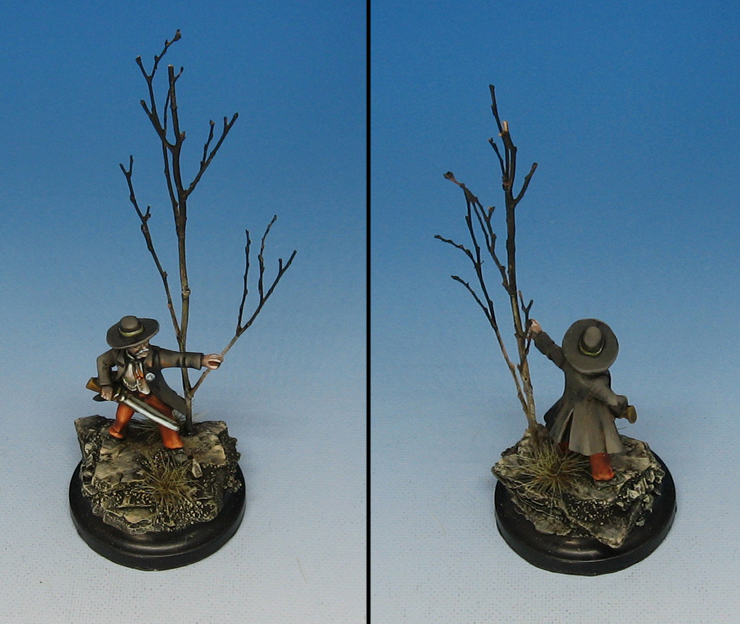 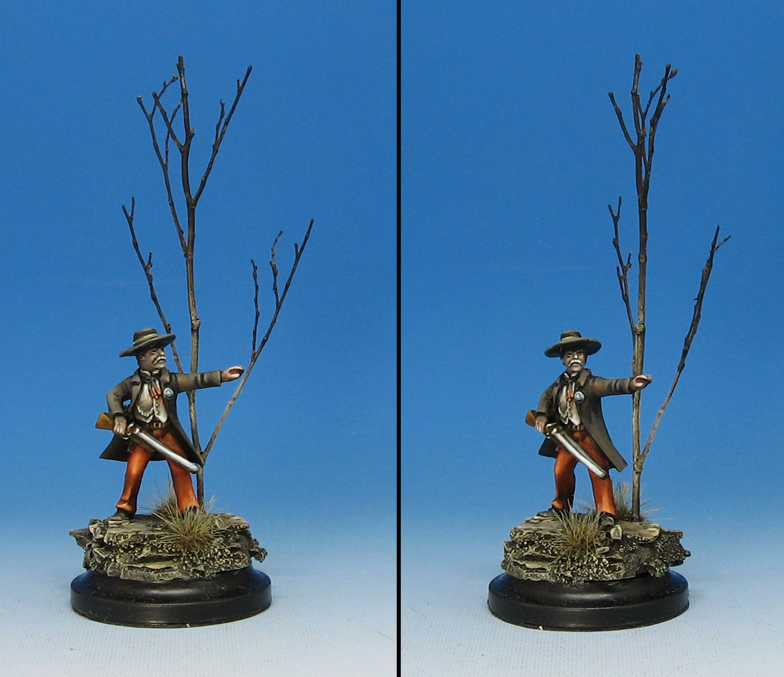 Posted by wappellious at 9:37 PM No comments: 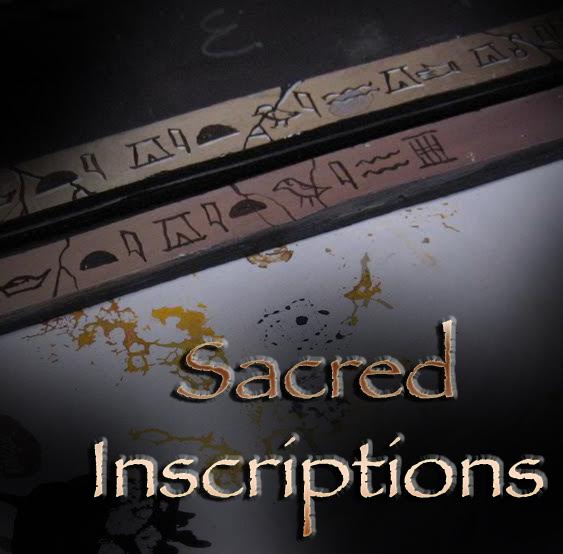 After the recent articles on the process of reworking the movement trays for the Empire of Dust, there were a number of questions on how the inscriptions were done.

These were created years ago when I first made the army.  I had to back track a bit, but could not find any step by step posts on the blog.  Since I had to repaint those new and adjusted trays, I thought I would take some images along the way!

Here's what I ended up with after chopping up the old trays. 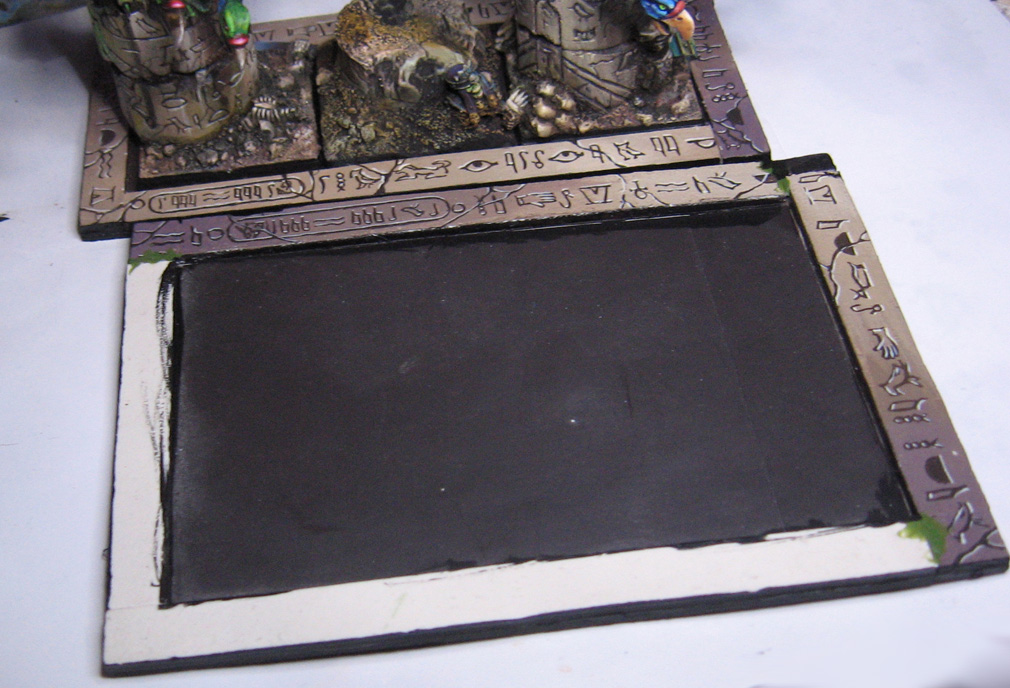 Since I didn't have the original piece of paper that had the inscriptions (scaled to fit, of course), I would have to use my other trays as a reference.  You can see the cartouche of Pseusennes there on the left.

First, I needed to get the sculpey pieces along the edges painted.  Just three colors... a tan, a purple, and an off white. 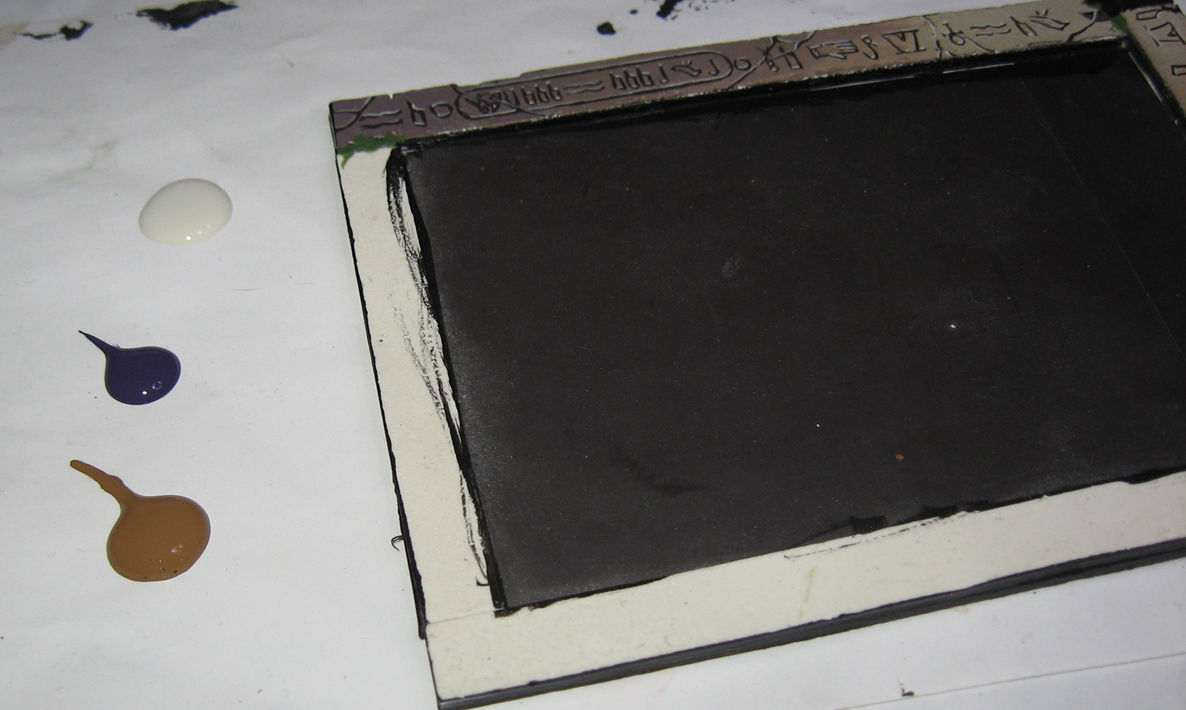 The purple and tan were mixed together, creating a few different shades on the palette so that I could reach for them quickly. 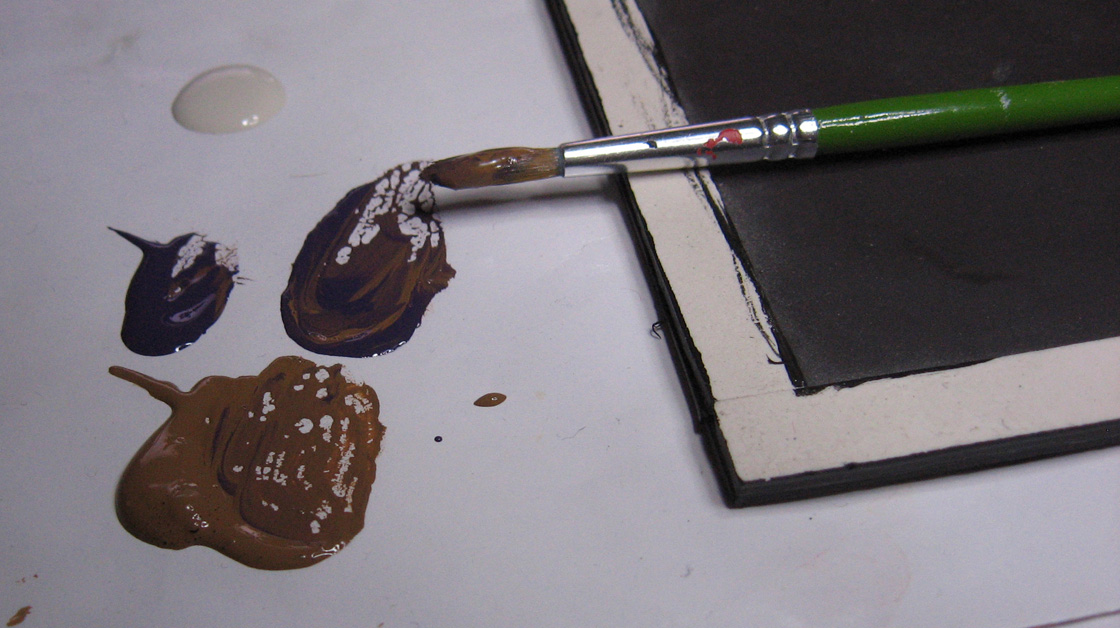 I set down the lighter and darker shades first, so that I could blend them together. 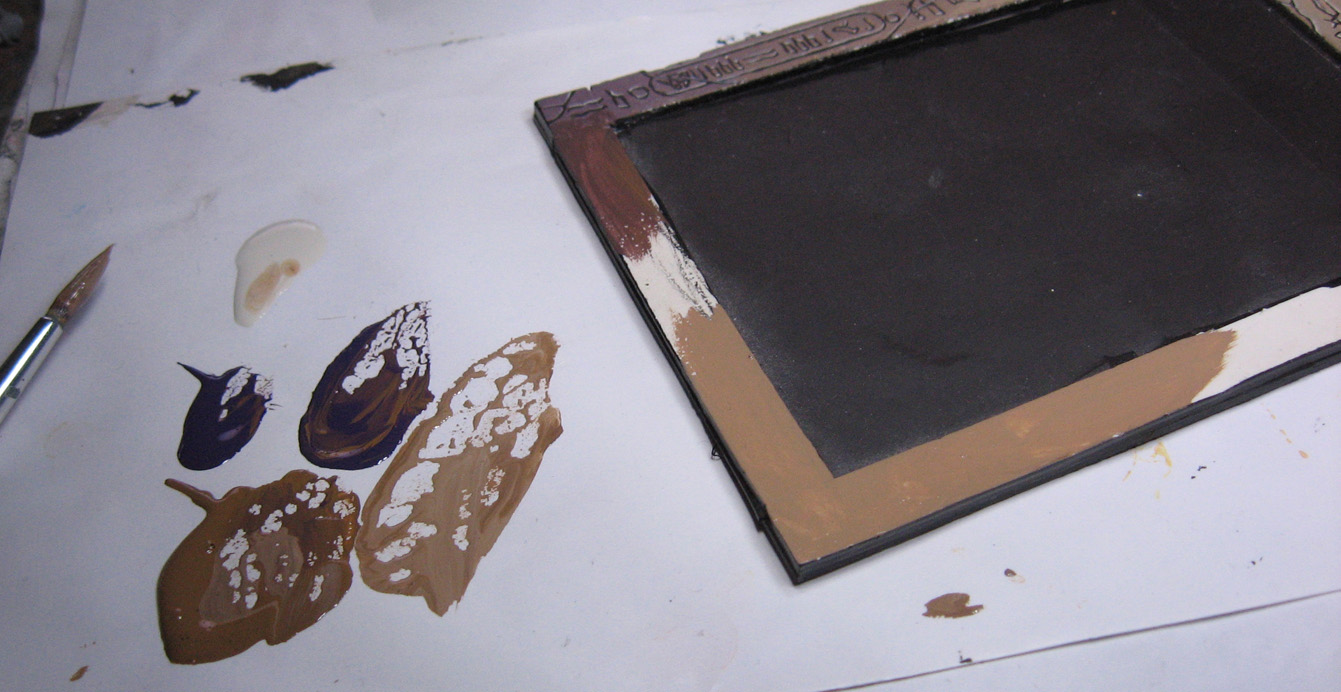 I started doing that by carrying some of the 'middle' shades into both the dark and light areas.  Since I was working so quickly with a larger brush, the paint did not dry before this was accomplished. 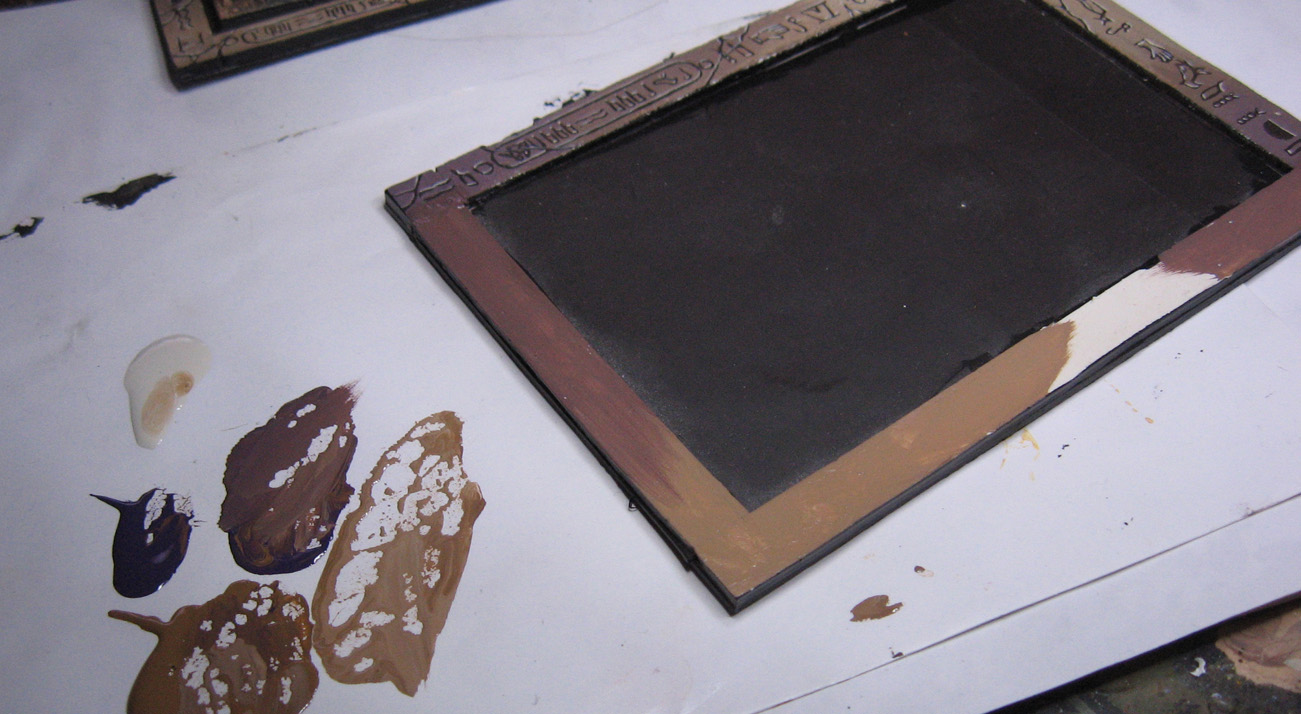 All the tans are in place.  You can see the variations in light and dark.  I also touched up any of the black lining at this point. 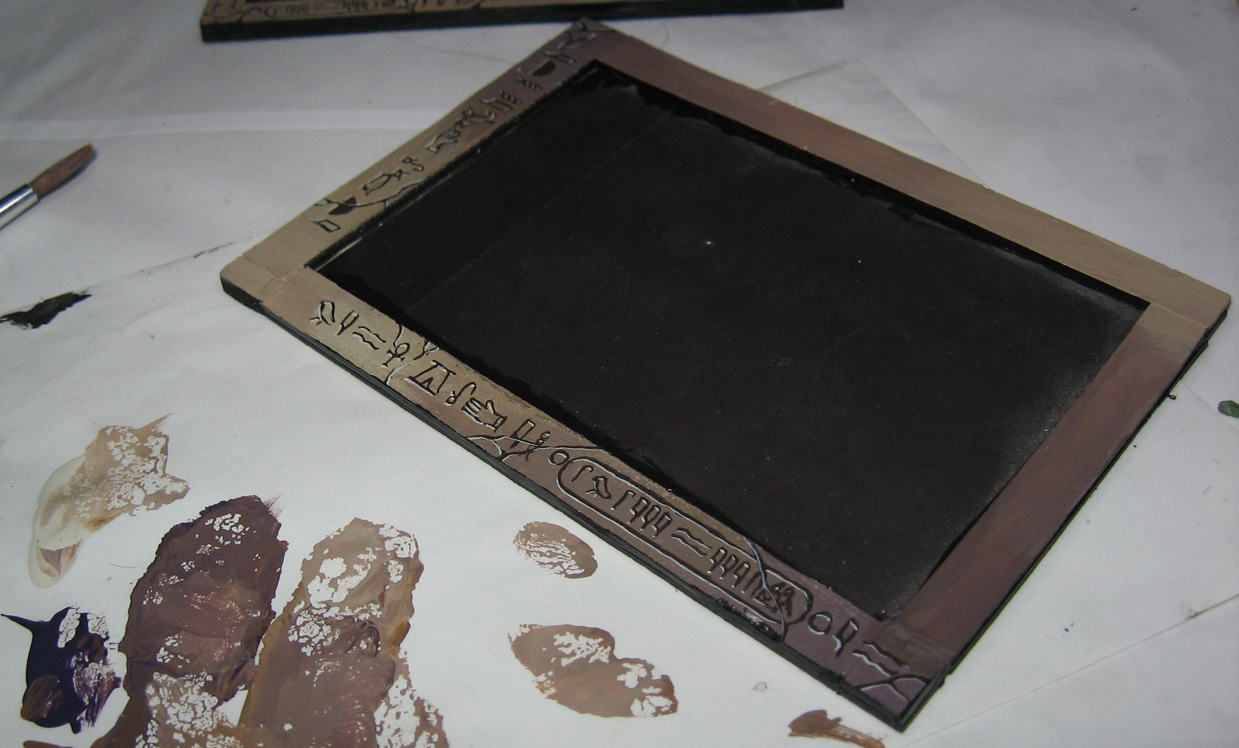 As I mentioned before, I didn't have the original piece of paper.  Still, I had my original trays, which carried the warning "All those who enter the Tomb Cities of Pseusennes shall suffer a fate worse than death". 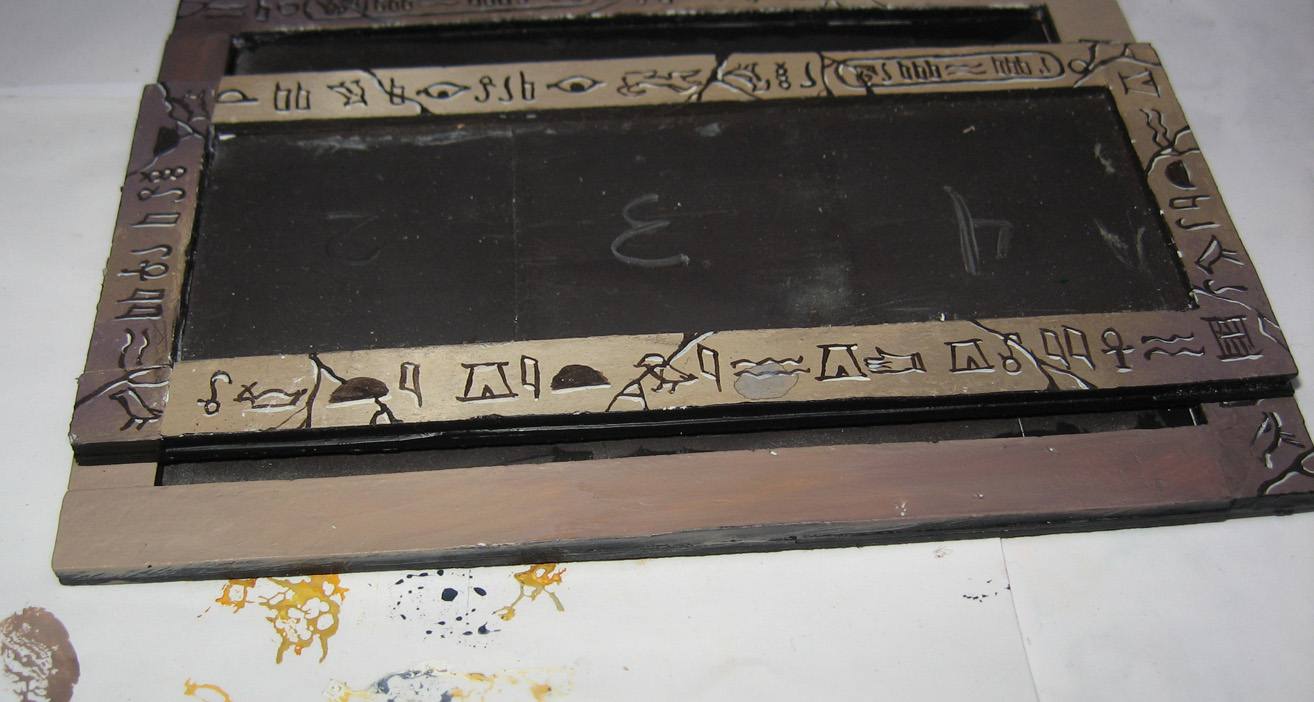 Having the two side by side made it a lot easier to transfer the design down to the new tray.  The paint is Reaper Brown Liner, which is a very nice, thinner paint that has incredible pigmentation.  This is ideal for such freehand. 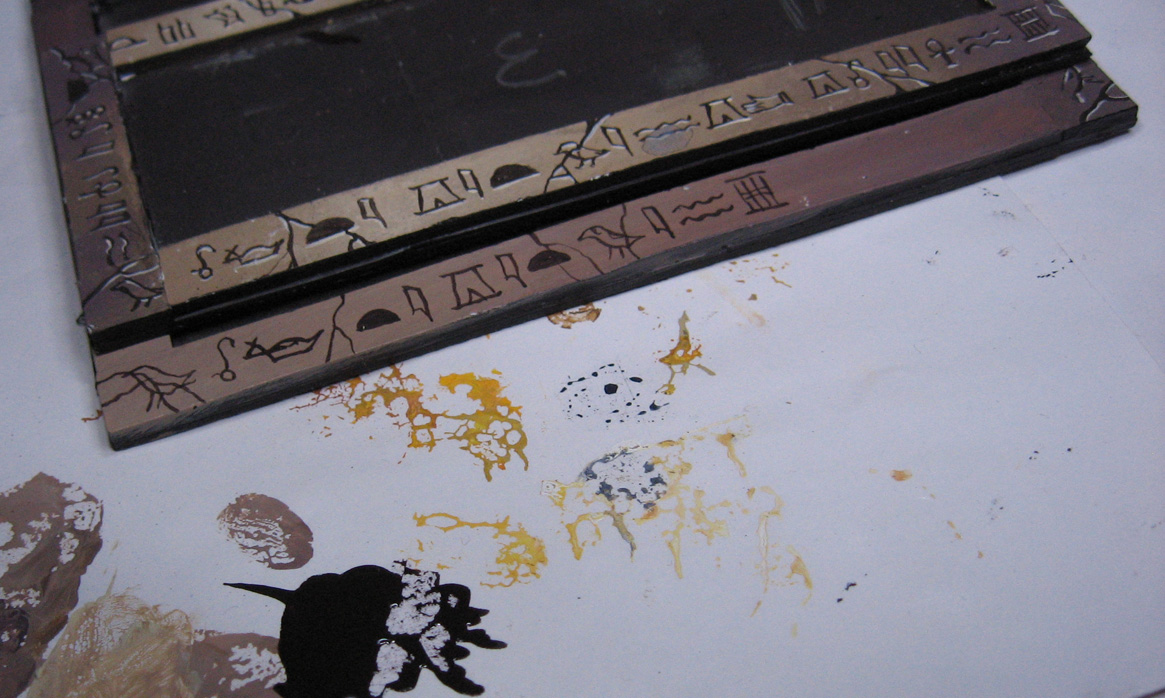 The dark colors are in place, but you can see there is a difference between the original sections and the newer lines.  I need to pick out a few highlights along the edges, which will give it the appearance of being carved.

Fortunately I thought of this before I carved each and every movement tray when I first made the army!  That would have been many hours of torture.  This was mere minutes of painting. 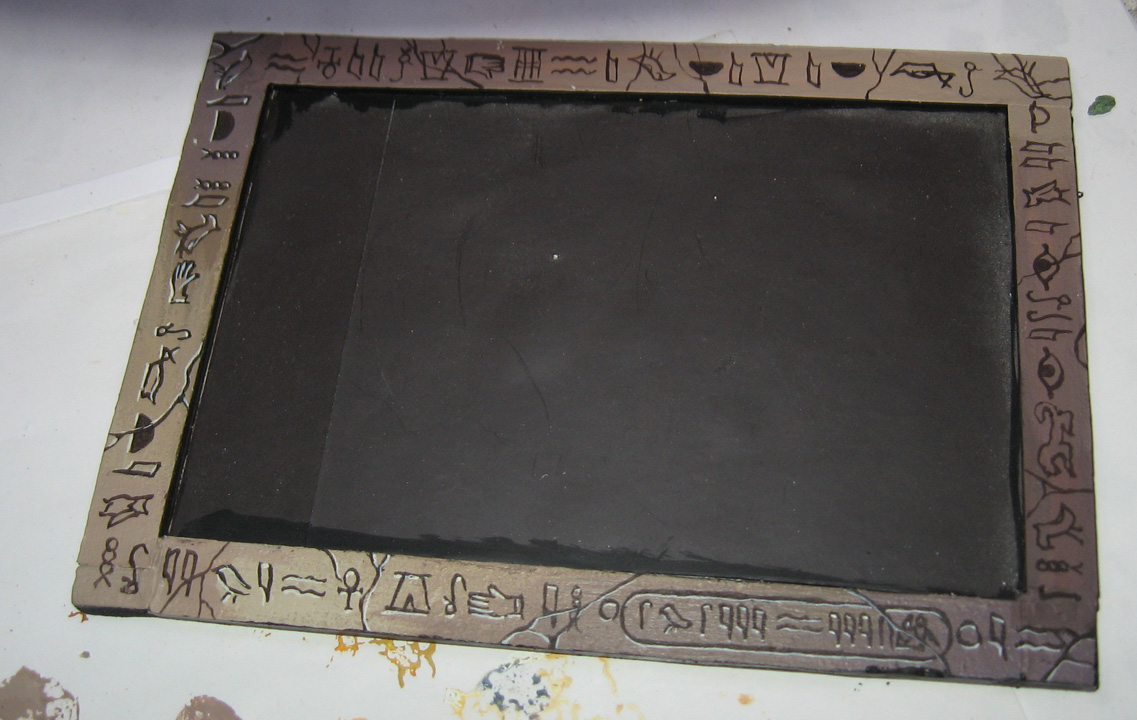 I made sure to follow a single direction with these highlights.  The finished bits on the left definitely have more shape than the area without those highlights. 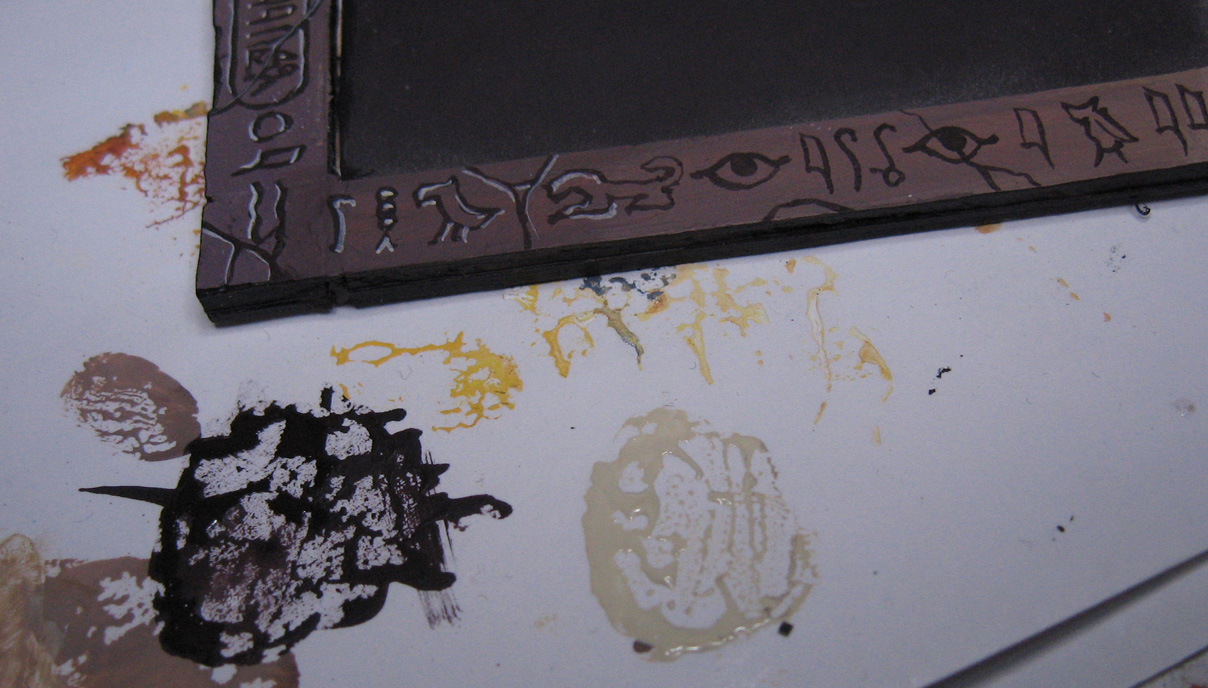 The completed tray!!!  Now I would need to do this to the other trays, and then work on the various unit fillers that I had created.  Those are future posts, so stay tuned! 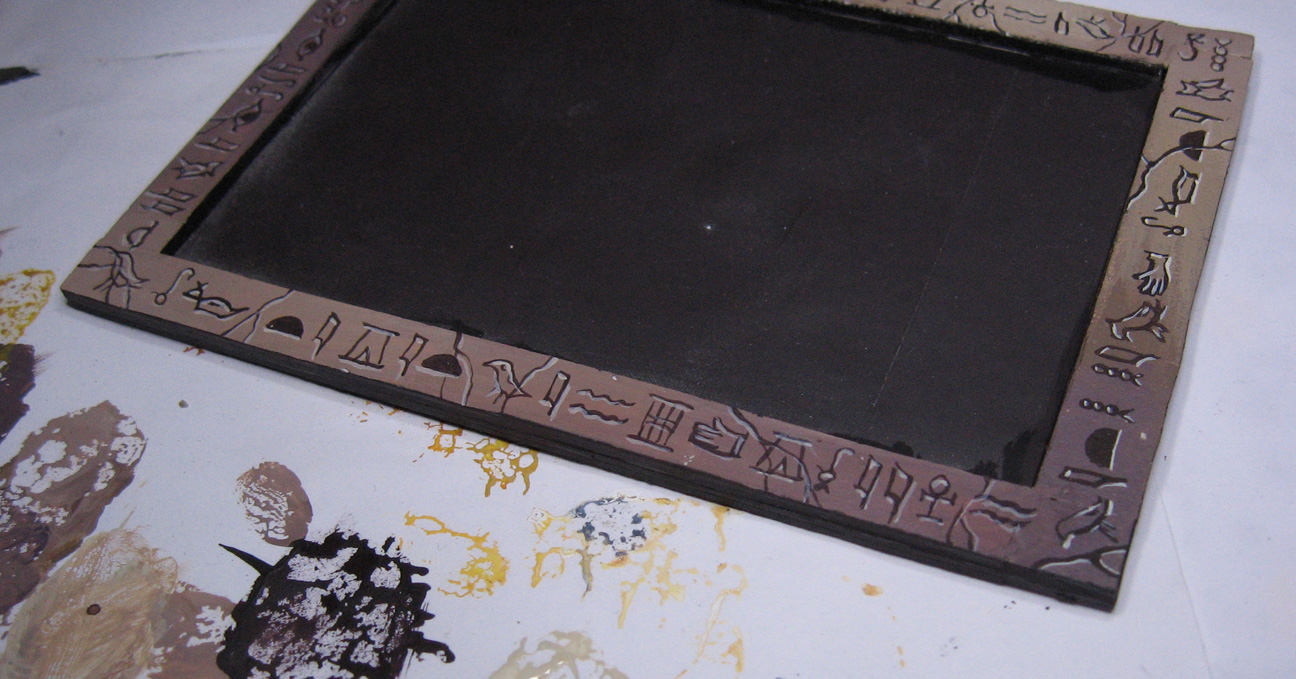 Posted by wappellious at 2:53 AM 3 comments: