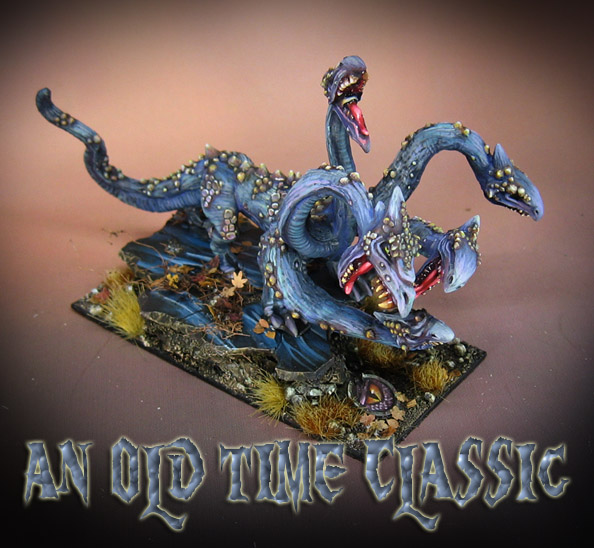 This ancient Hydra is quite old, in more ways than one.

Not only is this a long out of print figure, but I hadn't touched it in several years.  It's interesting how much you learn in that intervening time!  Among all the principles I had learned since then, the notion of having lots of subtle color variations (even in something with a similar value scale),  can make a boring surface texture wise far more interesting!

While this seems like one shade of grey from a distance, there are many tints to it.  I used a variety of greens, pinks and purples to achieve that variety.

I even used some slight glazes of burnt sienna in deeper crevices and around the protruding scales.

The view from above shows another new element added since the last time I touched it.  Using the new grass tufts and Green Stuff World texture rollers provided the vines and the rest of the base with much more texture.

The shield with the dragon eye was another fun element to add!

Using the Reaper clear red combined with the realistic water effects also enhance the slimy look of the teeth and tongues :-)

So, I hope you have enjoyed seeing this blast from the past!  I often work on very old figures, and it can be very satisfying to see these ancient pieces treated with "modern" paint jobs and techniques!