One more time into the breach! 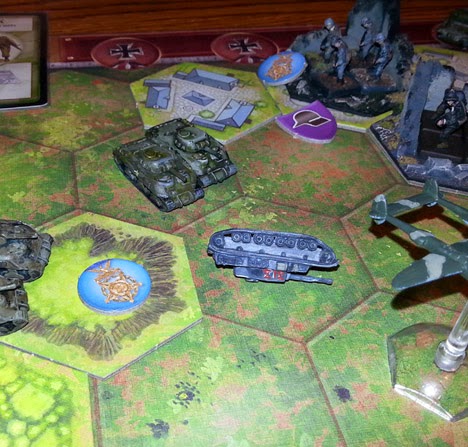 Well, since internet and printer issues have kept me from doing everything else I was supposed to do today, we have the conclusion of the Martinsville ridge conflict.

Tucked into those buildings are hard line German troops.  One of them is an objective for the Americans, but I will have to simply feign interest in that, so that I can concentrate on the left and center.

We see here some evidence that even the best strategies can go haywire... as evidenced by the equivalent of three '1's'... ouch!  Someone needs remedial target practice. 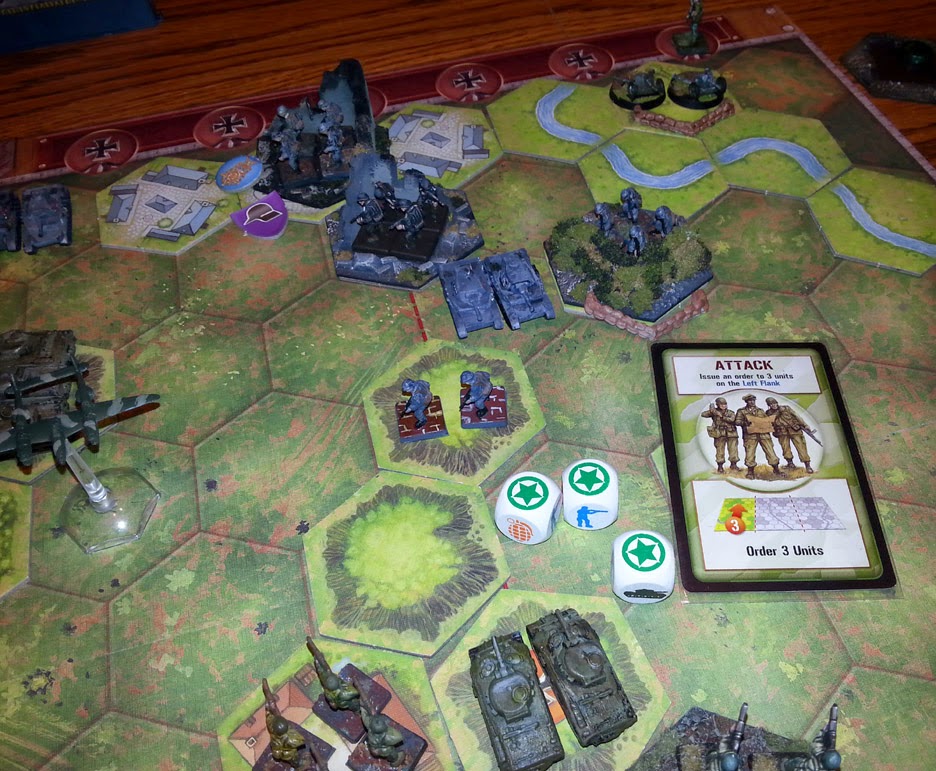 And this would be one of the reasons I spent all those early turns getting the armor into position, and even why I went ahead with the extra armor unit.  The tide of iron surges forward (with the help of  fighters overhead) and wipes out another unit.  It also means I have an objective! 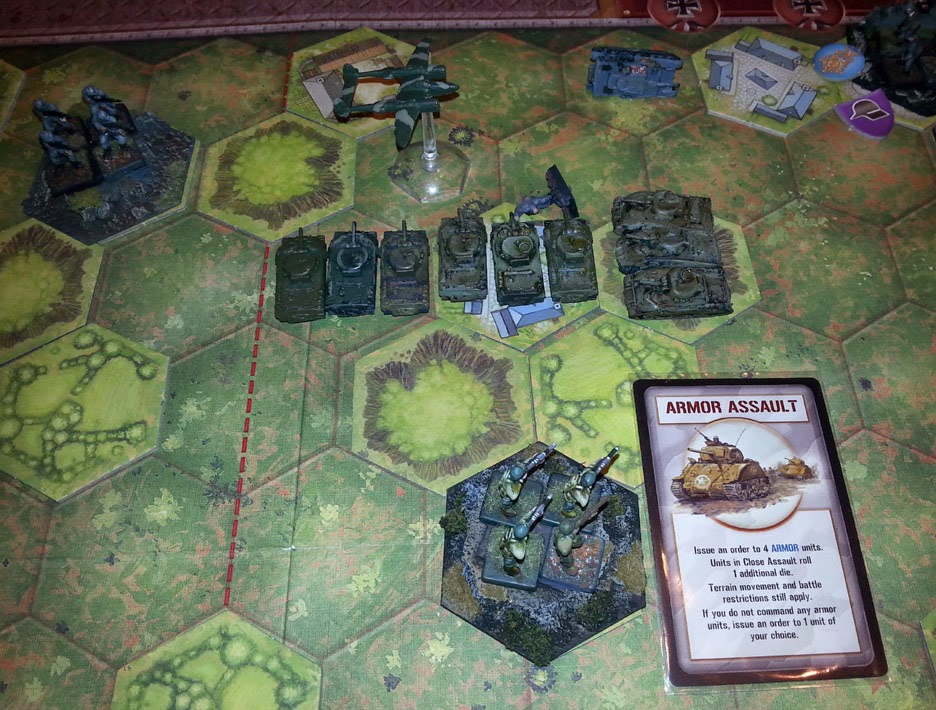 Some long range artillery shots force the tank units off of that objective... using the "ignore terrain" element.  Other attacks fail to hit home (those darn stars again!) 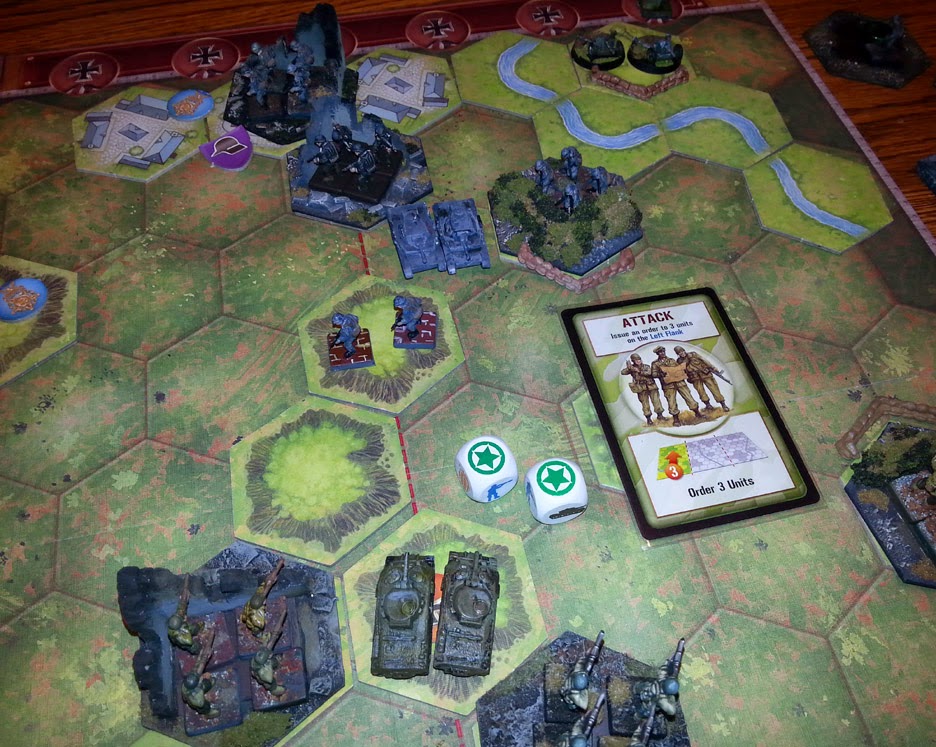 Another card for the center!  The armored unit go back up onto the hill. 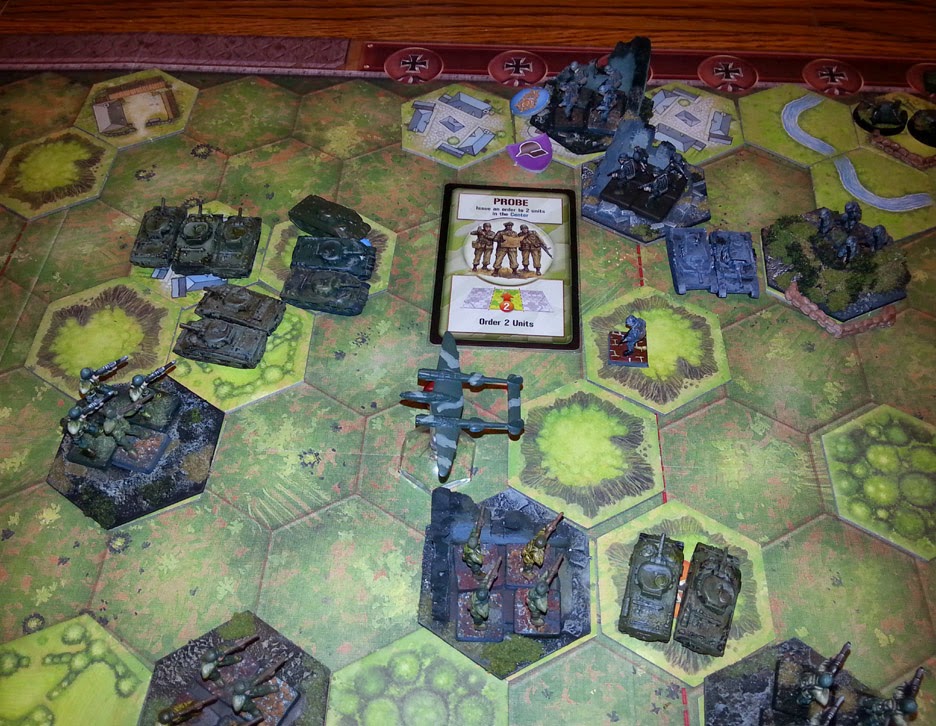 A desperate dash for Hill 122 by the Germans leads to a few dead Shermans.  Hill 122 (indicated by the iron cross) is now open... or is it? 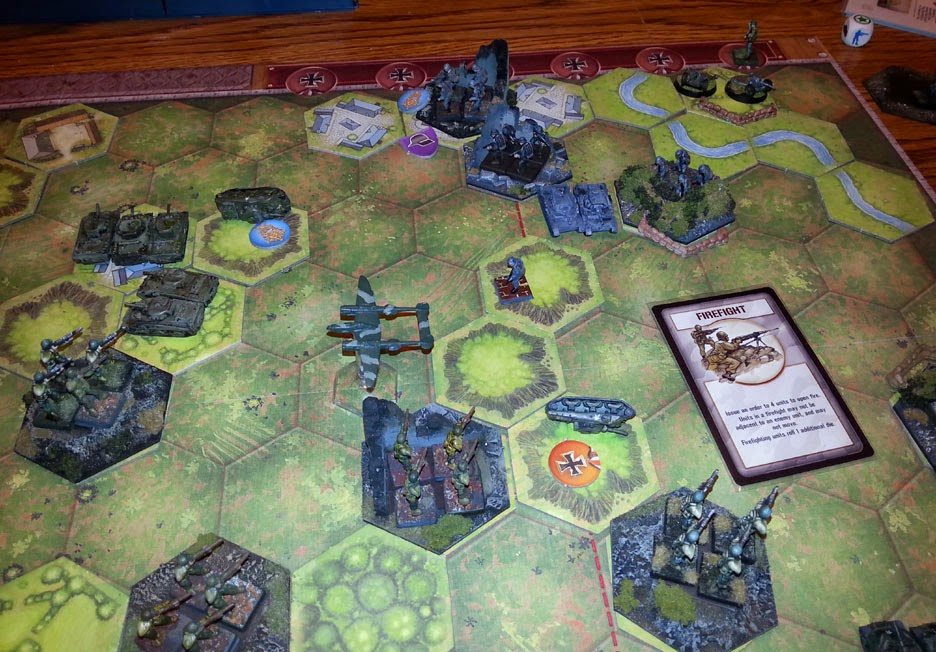 In response to all the deadly artillery fire from the Axis lines, the GI's call in a big barrage!!  Unfortunately, it is just as accurate as the US artillery in Kelley's Heroes. 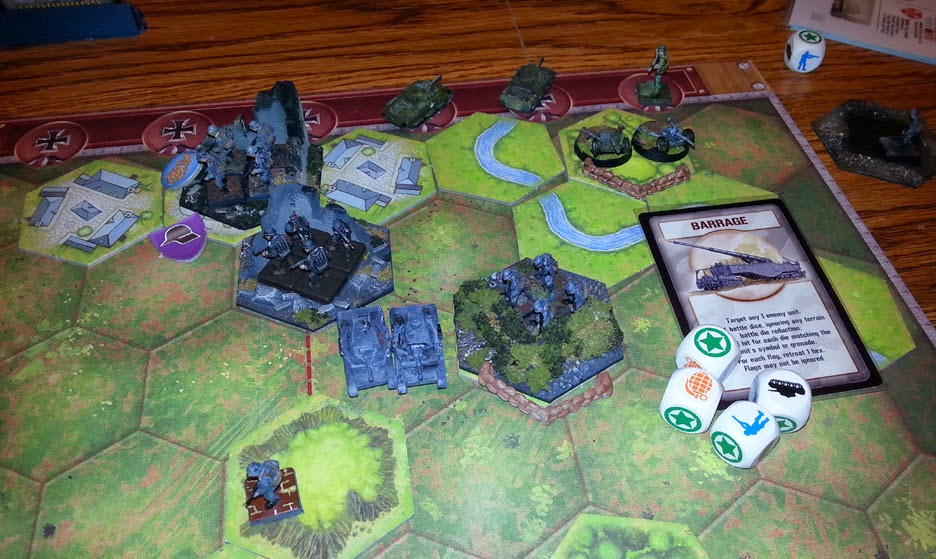 The Fuhrer himself orders the last remaining Panzers to deny the Americans their prize! 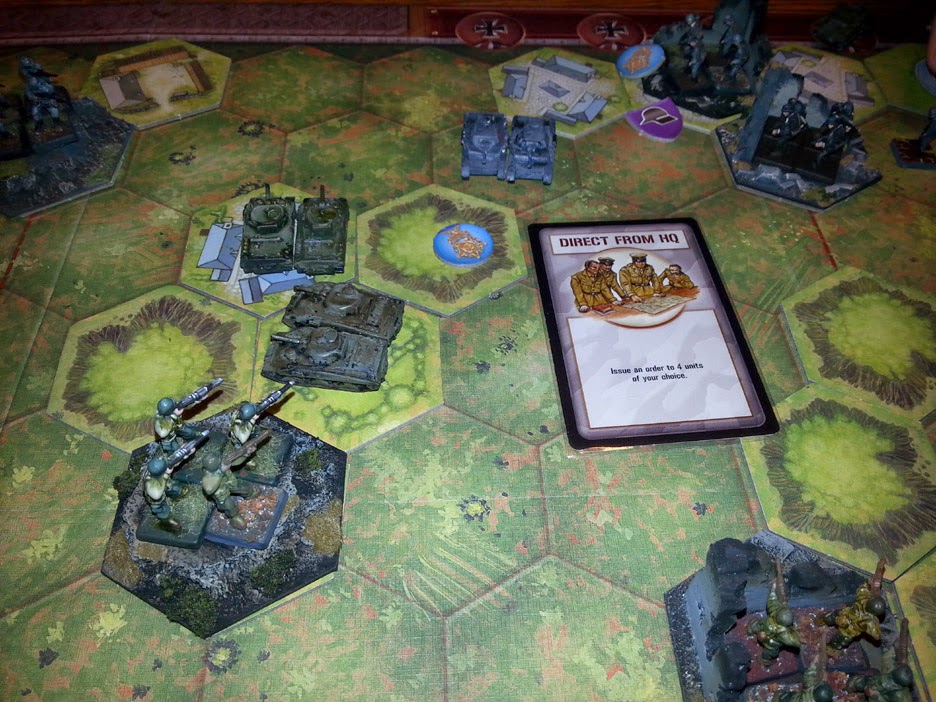 This was a card that I played to shuffle my hand.  I had run out of cards for the center, and this RECON card allows me to draw two and pick the one I want. 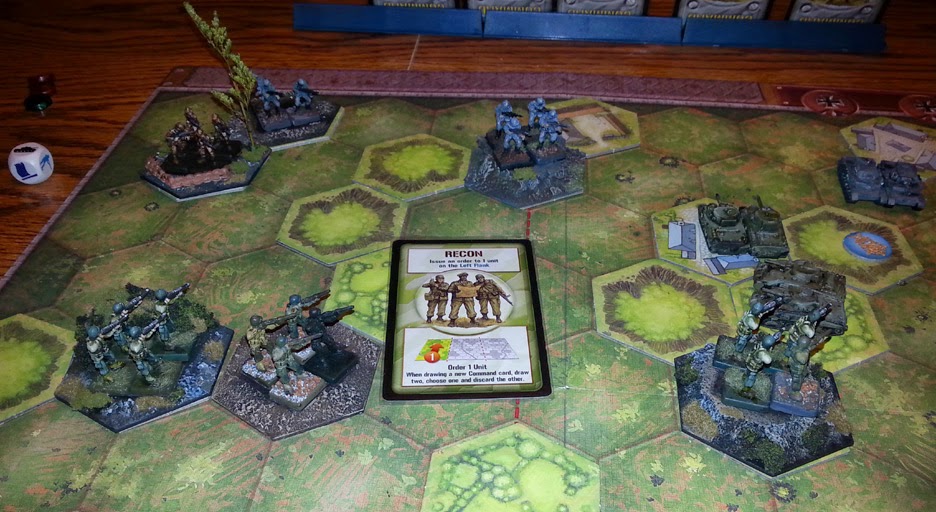 In the meantime, my air squadron continued its harassment of the German units, denying them cover, and also strafing... 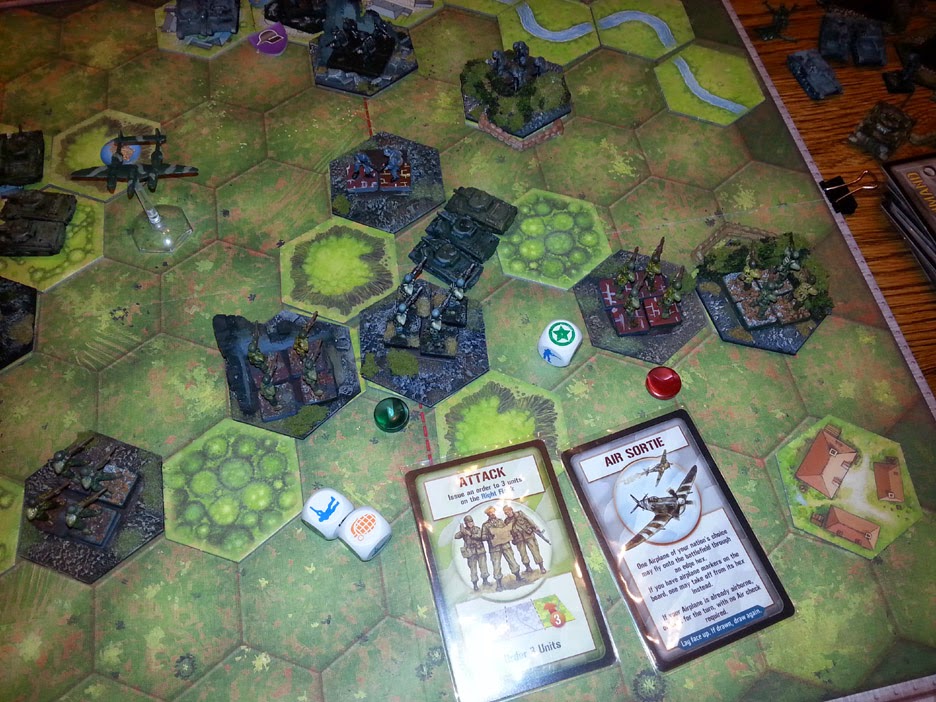 Here is the card that I was seeking!  Action in the center... but for the Germans.  Cowed by the Fuhrer's demands, the last armored unit pushes forward into a murderous hail of fire... 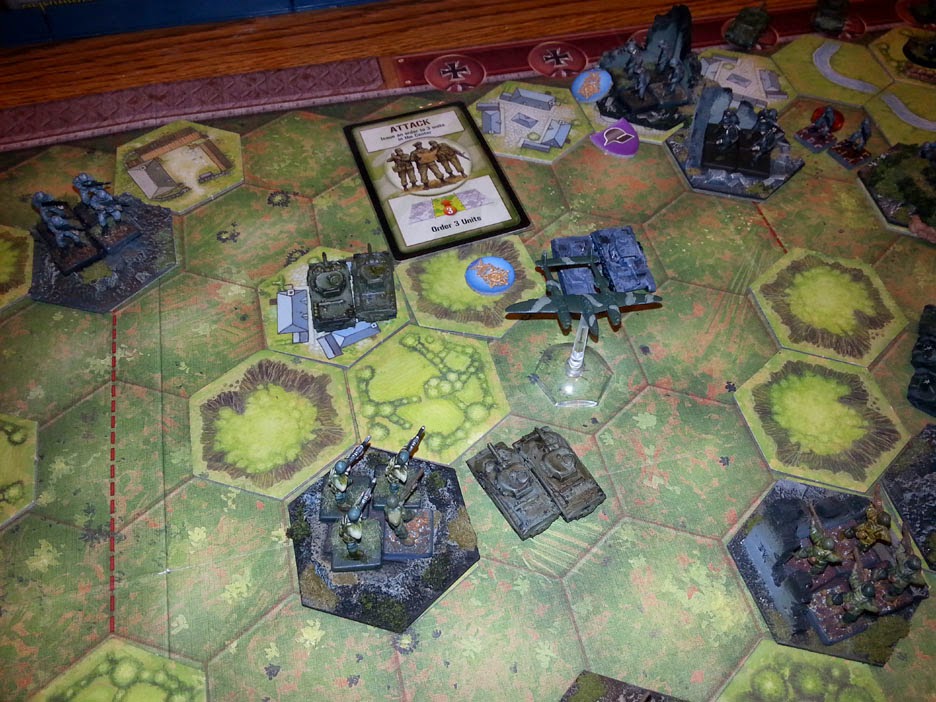 Fire from above, from the hilltops, the hedges, and the tank units!  Let the Panzer turrets fly!  Flames burst as ammunition explodes, and the Victorious Allies liberate more of Europe... 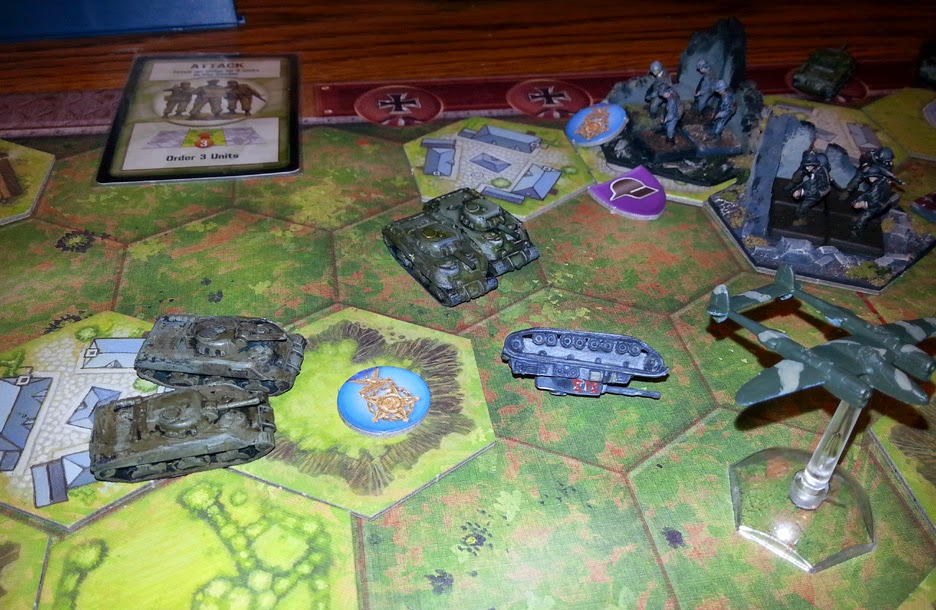 Posted by wappellious at 3:53 PM No comments: 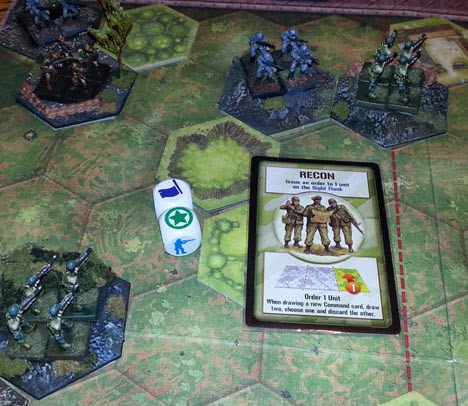 After the failed Panzer Counter Attack in the first scenario of the campaign, it was time to see who would gain control of Martinsville Ridge.

Here is the layout.  You can see all kind of heavy terrain, with one hill after another.  This should be ideal for the dug in, elite German infantry.

However, having been soundly defeated in the first scenario, there would be negative effects for the Germans before this fight would even begin.

This is due to the Victory Event Roll.  The more victories you rack up in a campaign, the more dice you have to negatively impact enemy units, or even his command structure!

I was able to weaken both of the Panzer units, as well as one infantry unit.  In response, enemy actions forced a few American units to fall back. 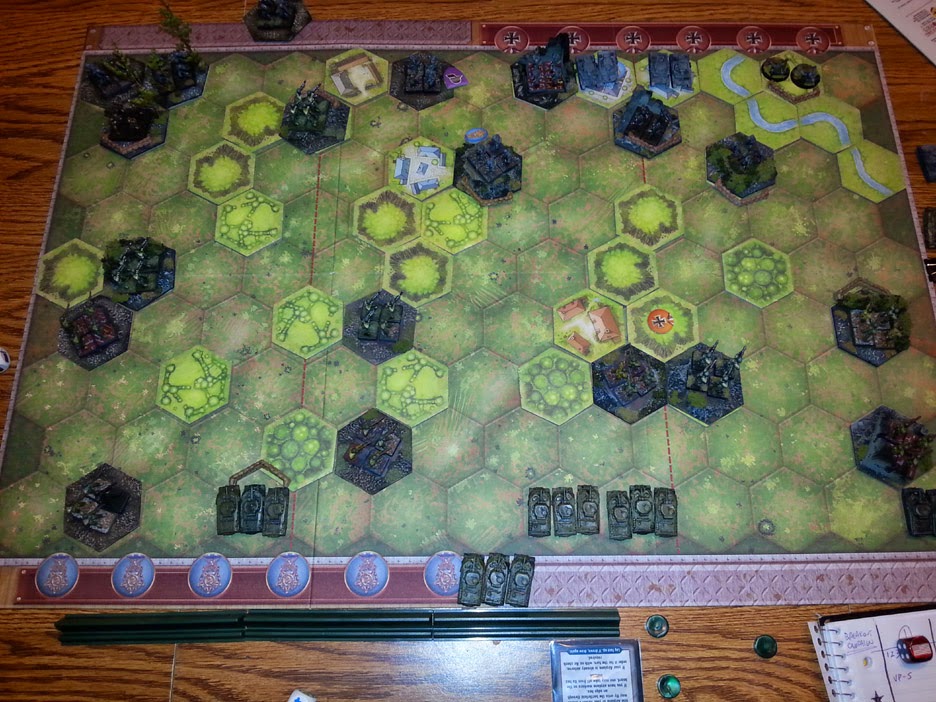 I was also able to replenish my reserve rolls.  A new tank unit entered the battlefield on my first turn.  While tanks do not do well against dug in infantry, they can be very brutal against exposed troops. 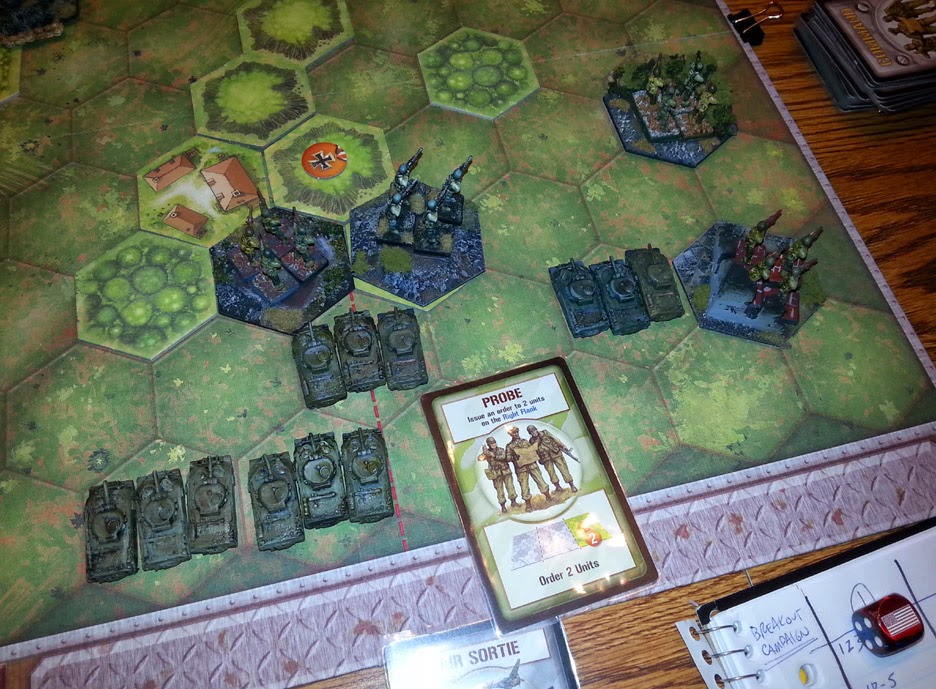 The Germans counter with a move towards the one unit of GI's that has found themselves virtually cut off behind enemy lines! 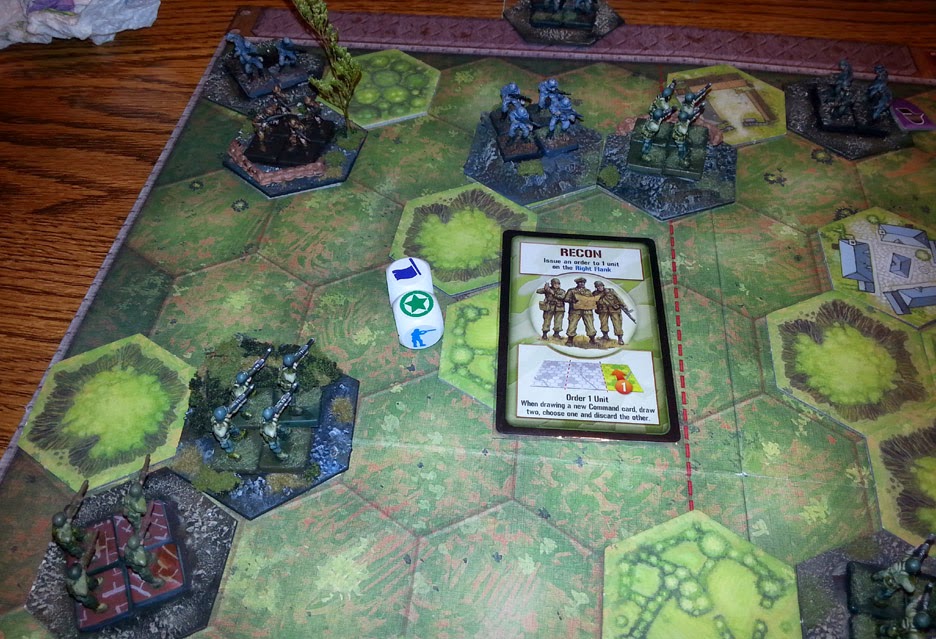 As that unit retreated, I attempted to move up armor to take advantage of some future card plays. 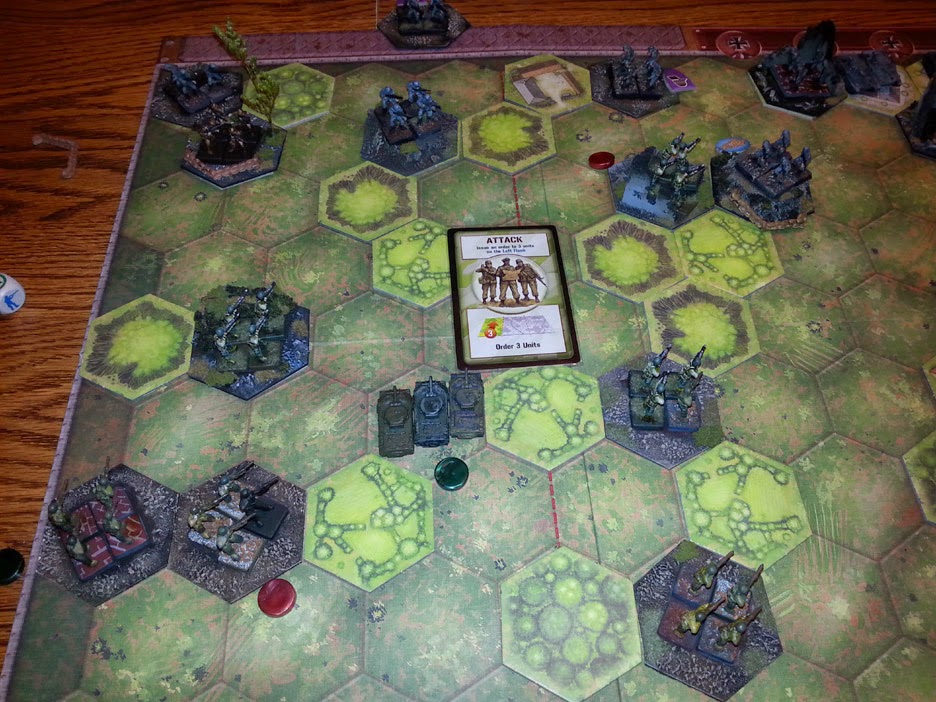 That lone forward unit of brave GI's manages to survive yet another assault, denying the Axis an early victory point. 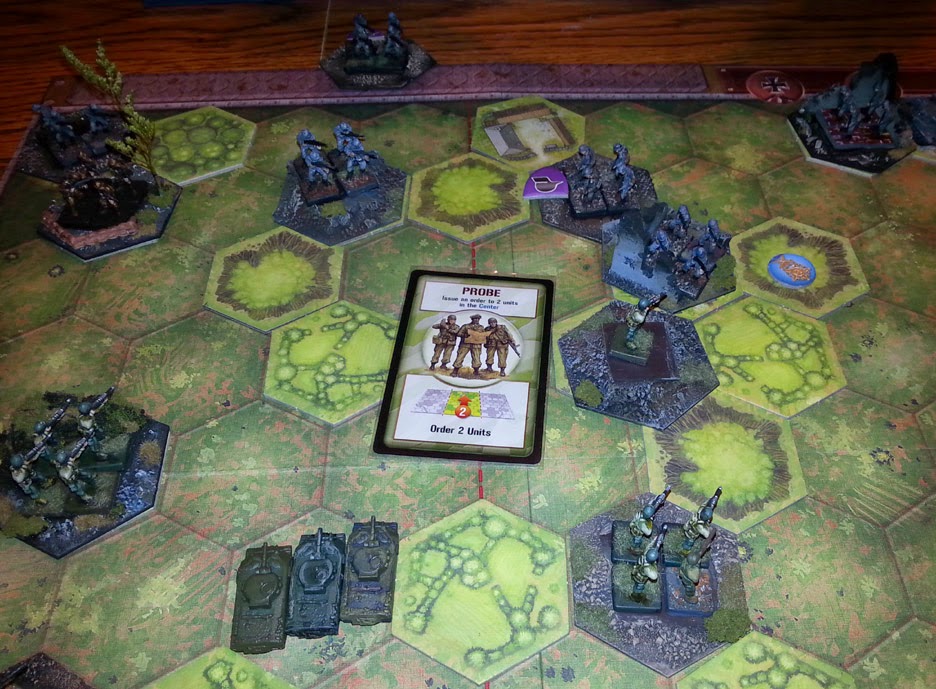 As I have mentioned before, setting up future moves is vital.  That is happening here, even though no damage is being done to the enemy at the moment. 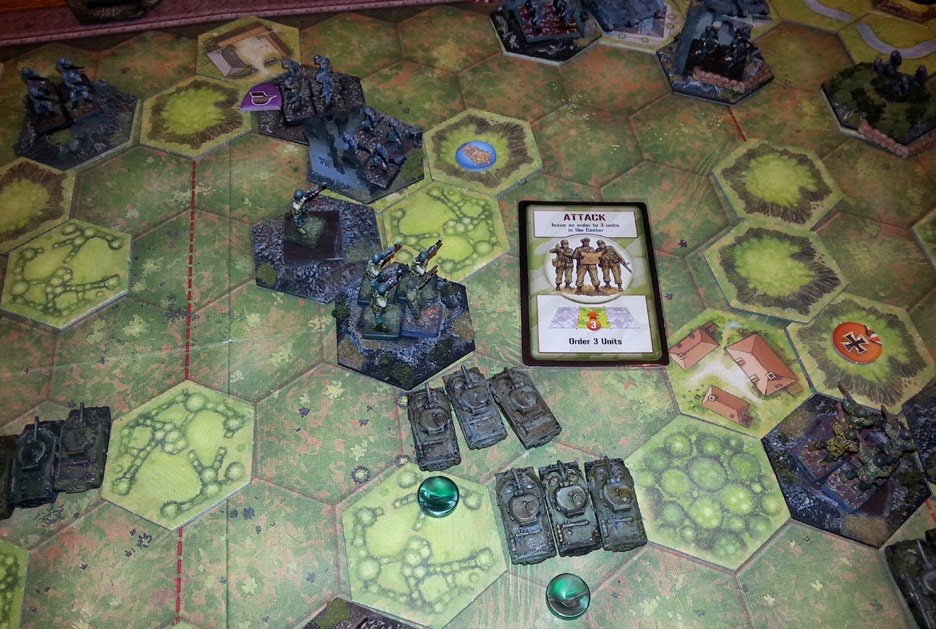 Patience pays off, as the German units are drawn to the American objective, seeking to deny an all important victory point.  Even more vital, they must take away the bonus points that are awarded to the US for holding such objectives between games. 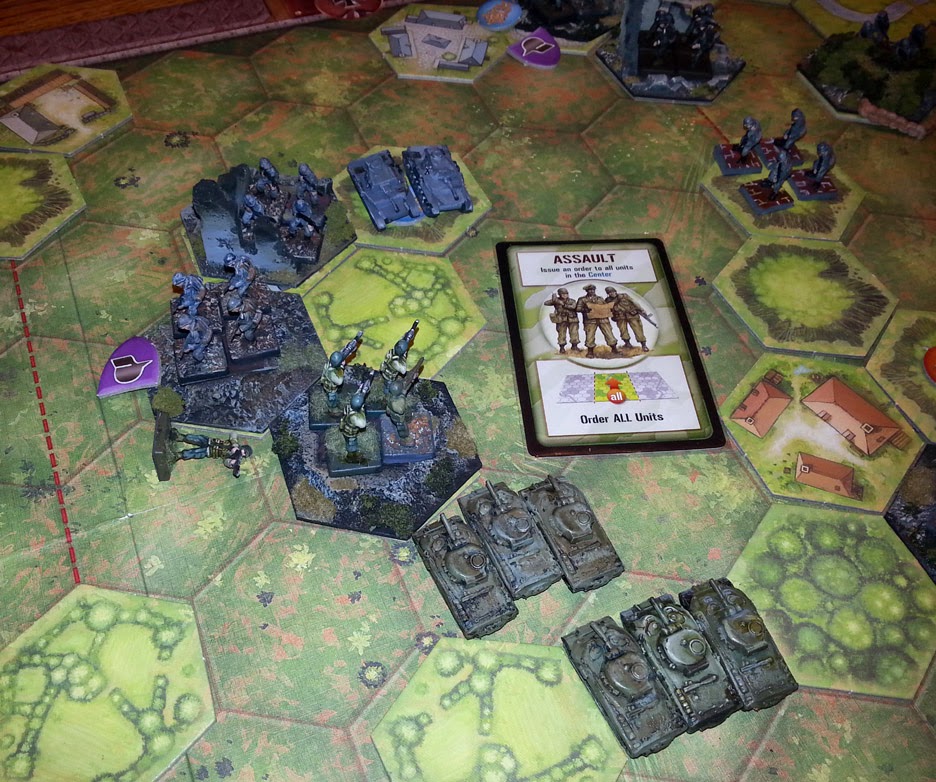 Ah ha!  At long last, I get to use aircraft!  These work much differently than the standard air power card.  Your planes don't cause the same kind of damage, but you can do some very nasty strategic elements to your foe.

Denying him his cover bonus, as I would do often in this battle, can make your tanks truly savage.

How handy that I had an additional unit! :-) 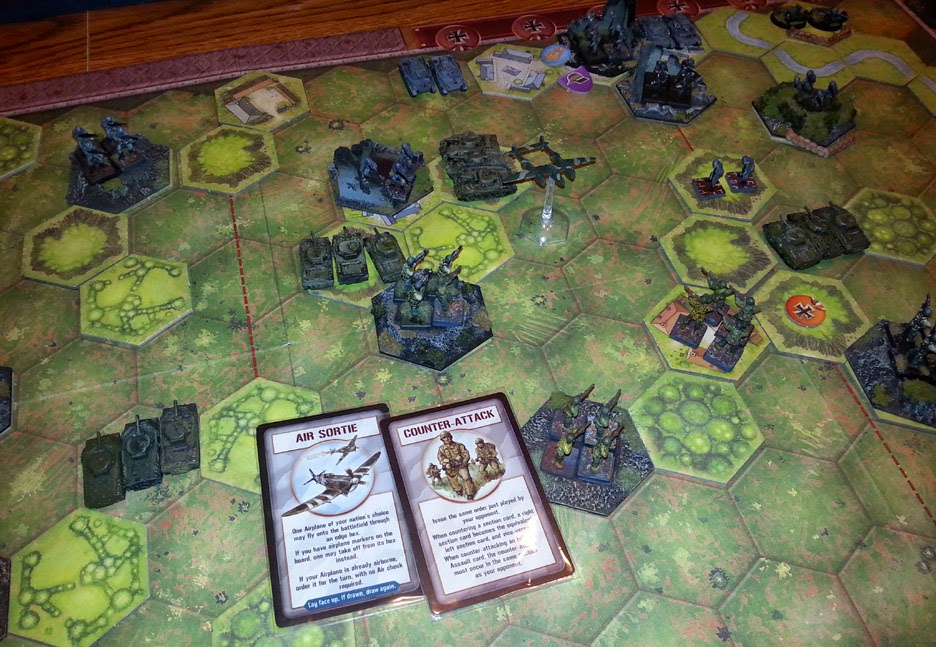 Your planes are vulnerable, however, if you leave them too close to the enemy units once their sortie ends. 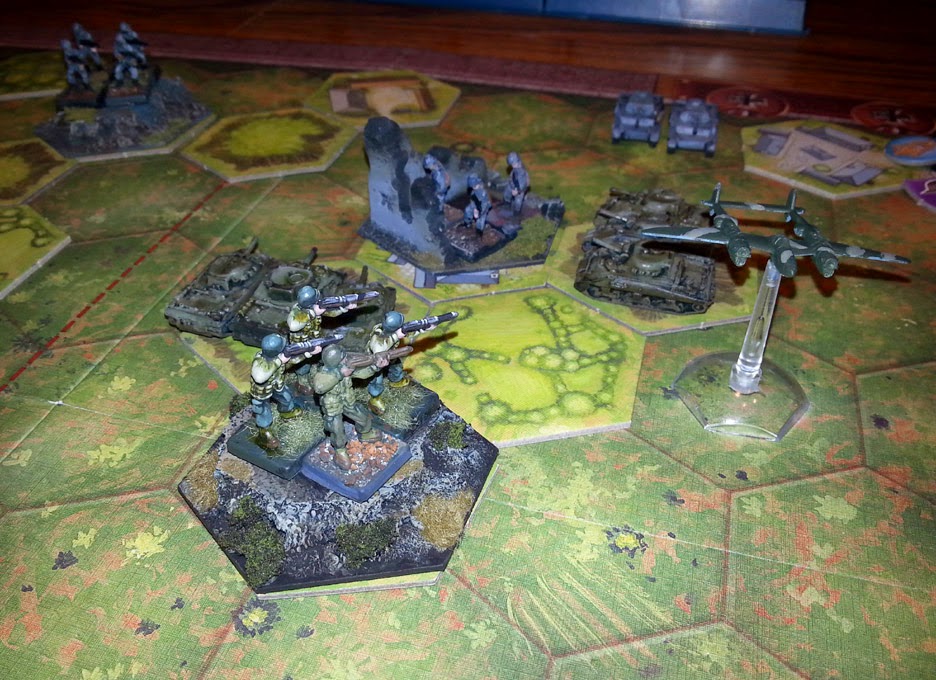 The exciting conclusion is on the way!

In the meantime, I wanted to show you the difference in the cinematics of an early game compared to this most recent adventure.

Even with a good portion of the figures painted, it is just not the same.  The terrain hexes, as I have mentioned, add a huge visual element.  It looks much nicer, but it is also a lot easier to play.  You can move the units around more quickly, and get a better sense of the battlefield in far less time! 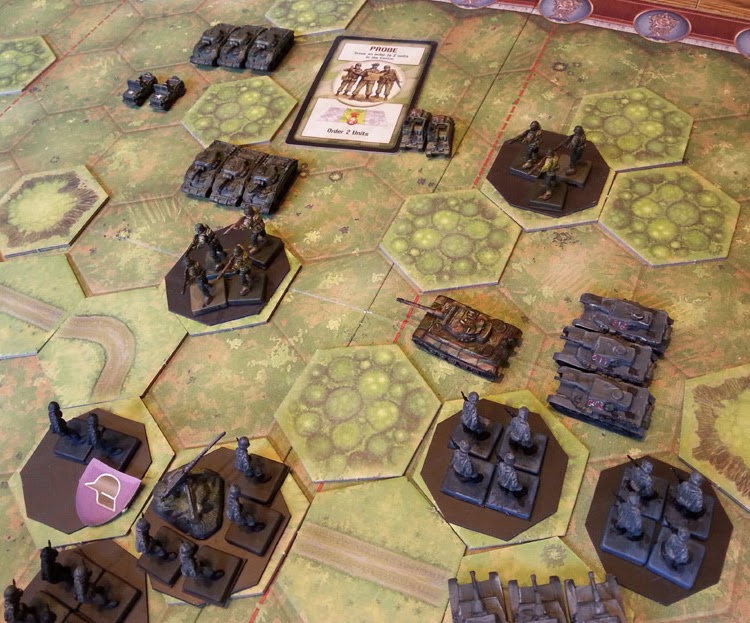