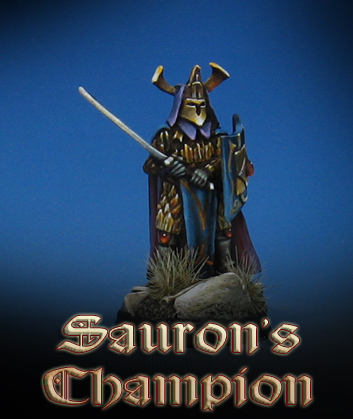 One of the interesting elements of the Lord of the Rings game was the workings of cavalry.  In addition to a more accurate representation of the power of a cavalry charge, death was not automatic for both rider and horse.

This was even more pronounced in shooting, where it had to be decided if either the horse or rider were hit.  If the horse was indeed struck, the rider would dismount, instead of instantly being killed.  However, this meant you needed something to represent that character on foot!

This is that representation, mirroring the weapon, shield, helmet and the freehand designs on the back of the cloak.

This group was particularly dedicated to Sauron, so the Eye came to battle along with them on the cloaks of their leaders.

I went with a bit of an alternative color scheme for my Easterlings, using this deep blue robe to designate special characters, leaders, etc.