Land of the Pharaohs 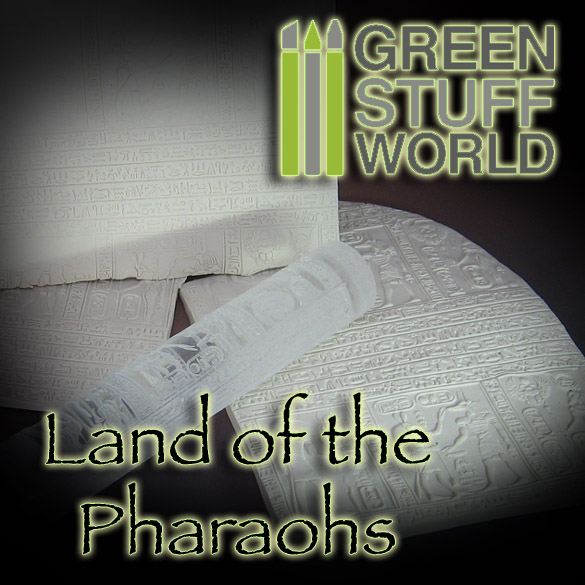 All new from Green Stuff World... yet another fantastic texture roller!  You have seen a number of great textures already, such as the Celtic ruins, Runic Temple and many others.

Instead of putting links to those previous articles that explained some methods for using them, I did a fresh demonstration here.  I was out of the usual grey Extra Firm Sculpey, so I had to use the regular white Sculpey.

This breaks easier than the grey, and is not quite as easy to get an even roll, but it will do for the moment! 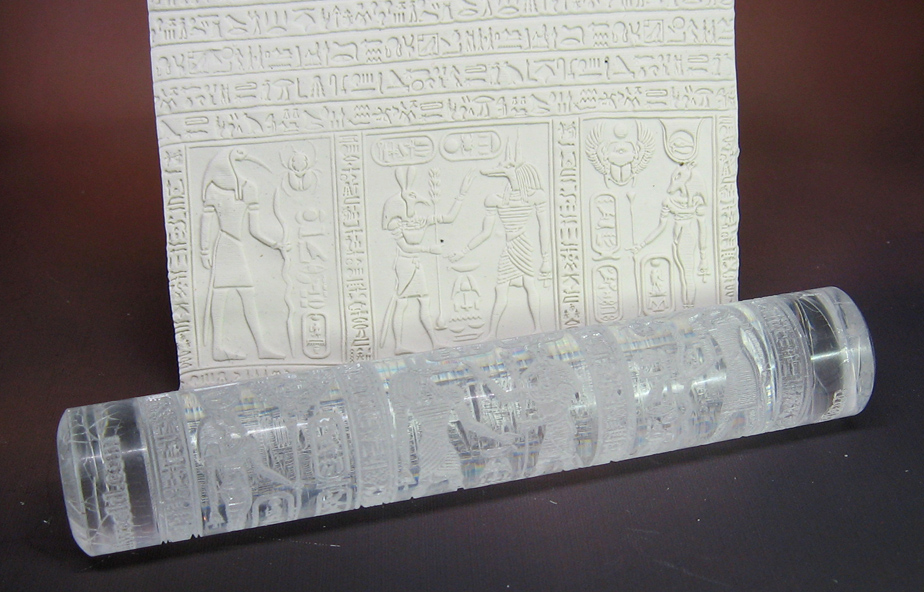 Like those previous demonstrations, I have a few materials and tools ready once the sheets have been baked. 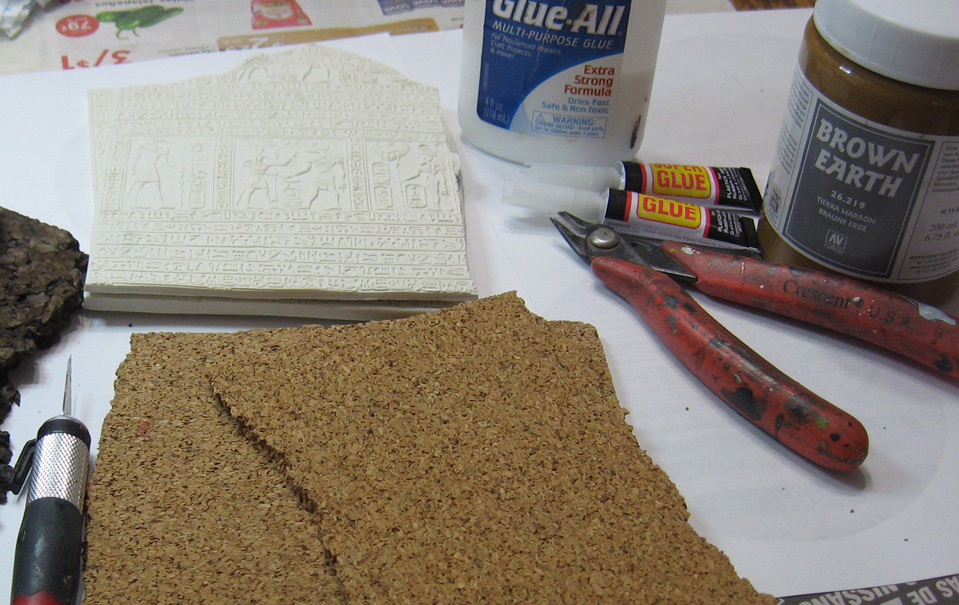 To keep things simple, I will put a piece of cork under the thinner sheets. 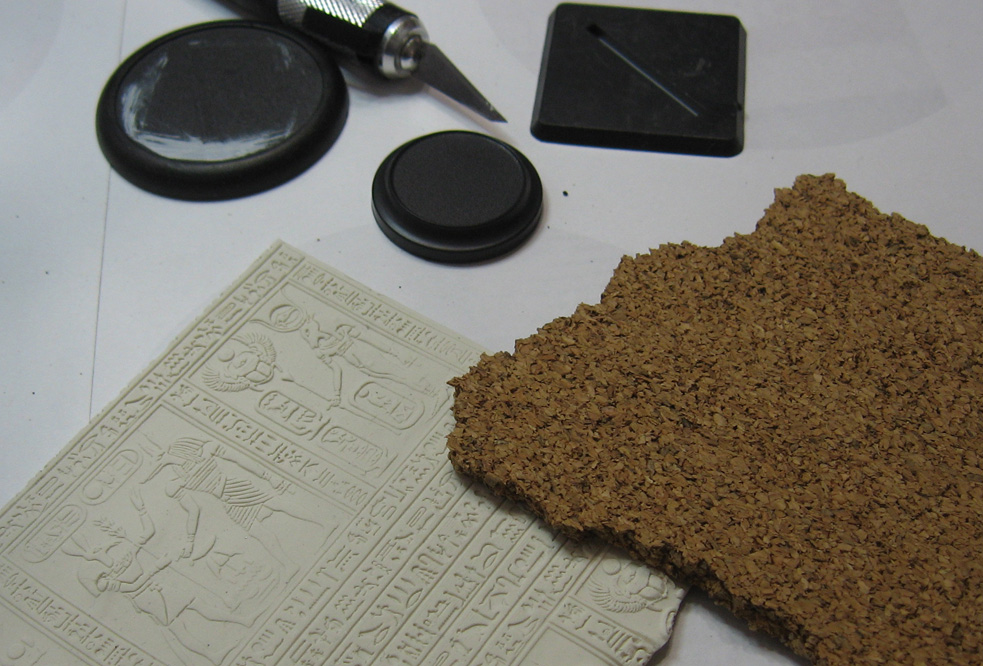 The cork is broken into shape, and glued in place. 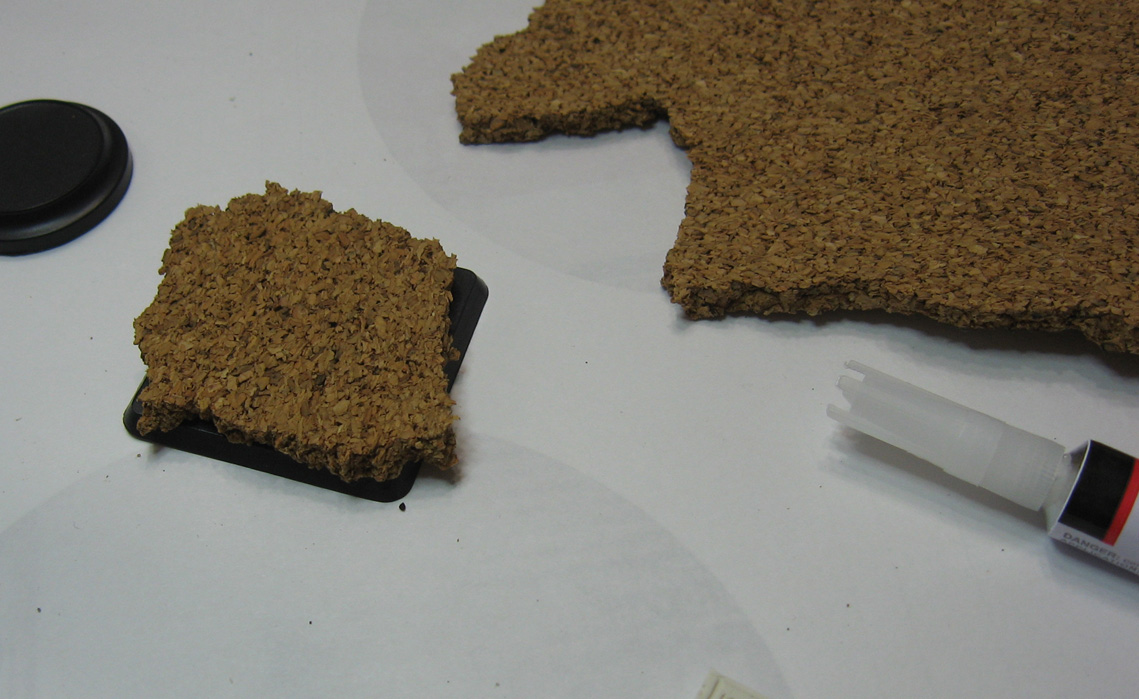 Selecting the piece of Sculpey is more involved, as you want to maximize the effect of the design.  It's also important to think about the footprint of the figure as well, and what that might or might not obscure. 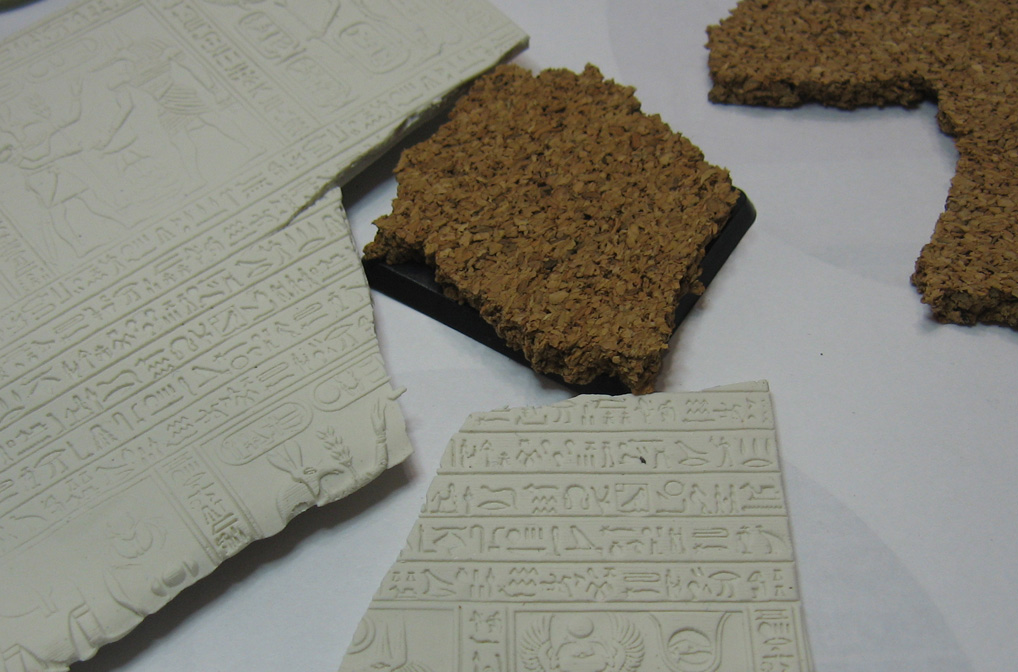 The overhanging bits are cut away for the most part.  It is OK to leave some of that behind, since that overhang can be supported later by adding the glue, rocks, oxide paste, etc.

The second part of the image at the bottom shows that the edges have been chipped away with an exacto knife.  This wears it down and weathers it a little more.  You could also sculpt cracks and other effects with simple carving tools.

Again, I wanted to keep this as simple as possible for the moment! 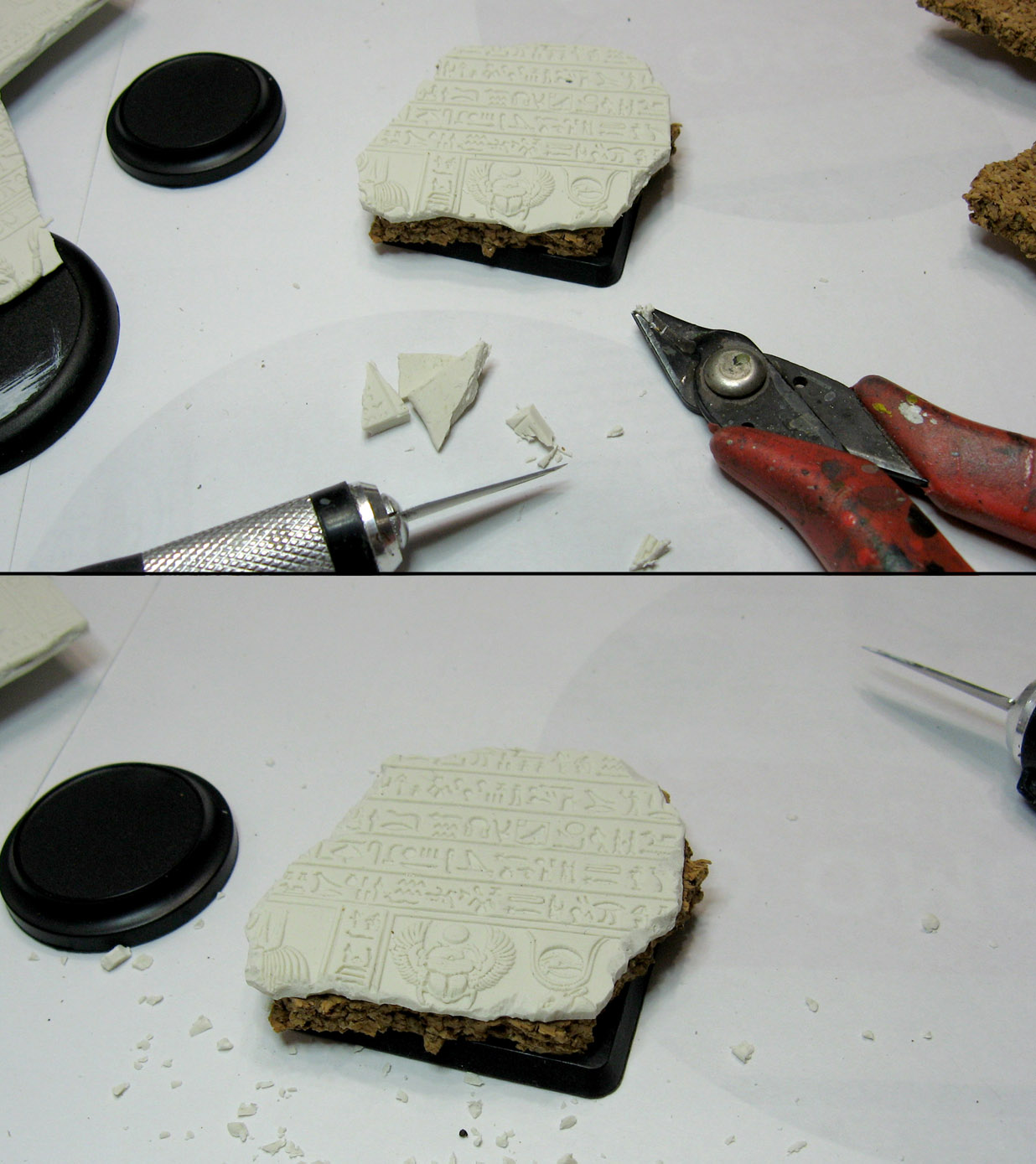 I usually select a number of different base sizes and shapes, because the designs of these rollers have large and small sections to the patterns.  Square bases let me get more of that design on the base, but there are ways to get more from round bases too.

I have a 'triangle' shape, which only overhangs in a few areas.  Those "open" spots let me get the base into contact with another base, which most game systems seem to have as part of the rules.

When doing a larger or more unusual shaped base, it is nice to have a few levels.  Here the Sculpey sheet is placed directly onto the base as well as on a piece of cork.

This makes the base far more interesting, and prefect for those horses rearing up on their hind legs!

These first few bases were done with thin sheets of Sculpey on cork.  I also have a sheet of texture which is about twice as thick.  Let's see how this looks! 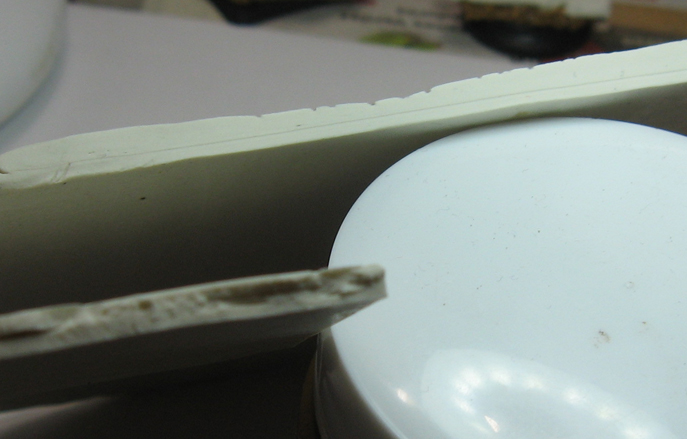 The thickness of this sheet means that I don't need to put the cork underneath.  I also end up with lots of nice broken and chipped pieces for the square style bases.

On the round base, I rested one larger chuck on its side for added interest. 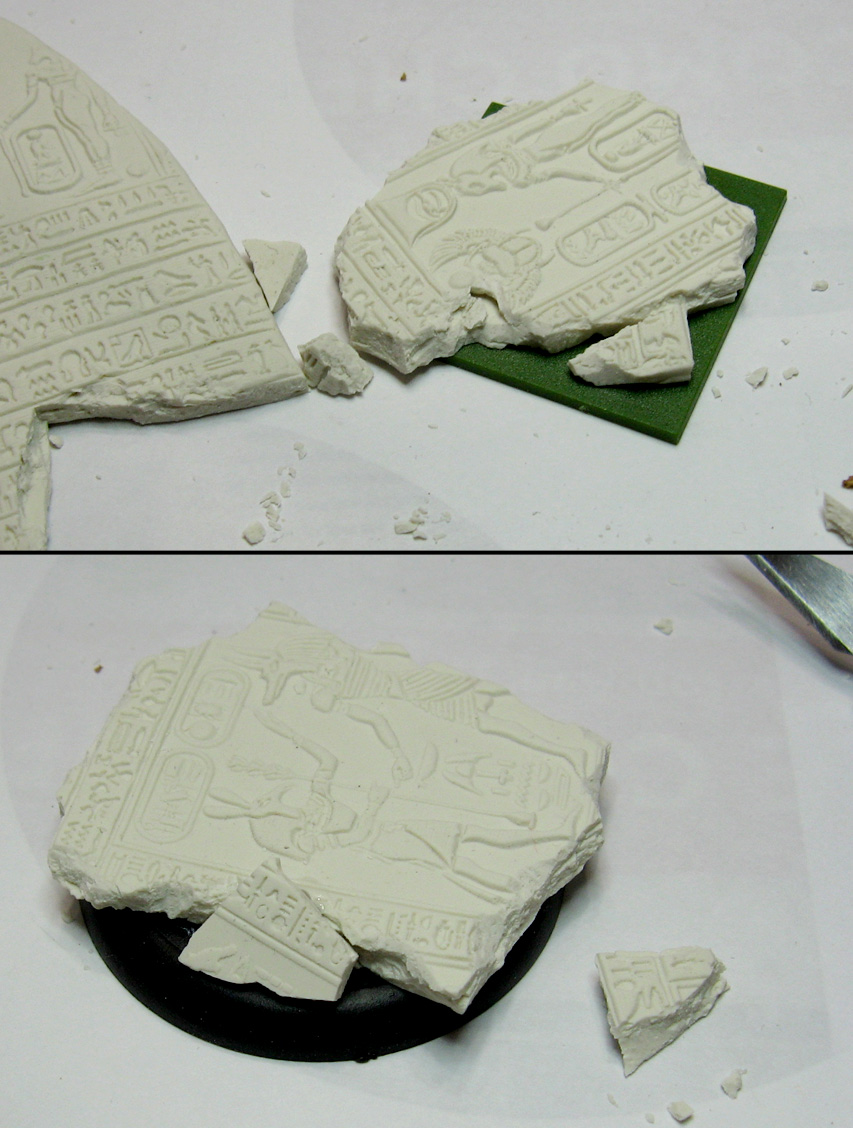 At this stage, the bases are now ready to have some sand and gravel added.  I have also used a variety of the Vallejo oxide paste products for this. 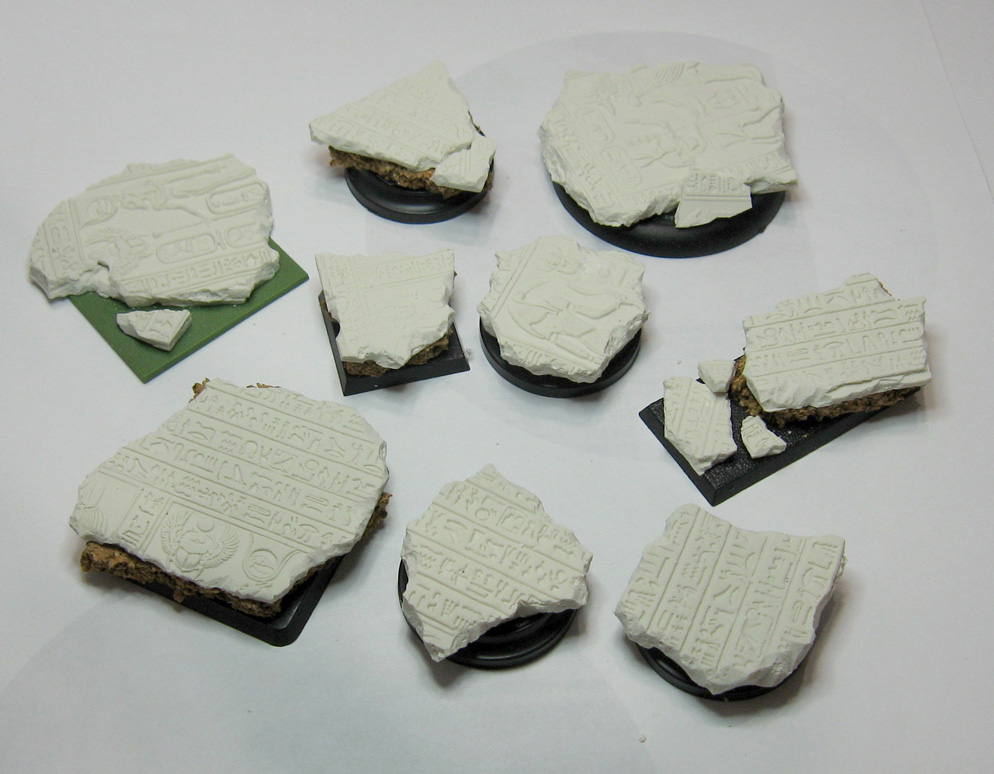 I have my three different grades of sand and gravel, and the extra strong Elmer's glue. 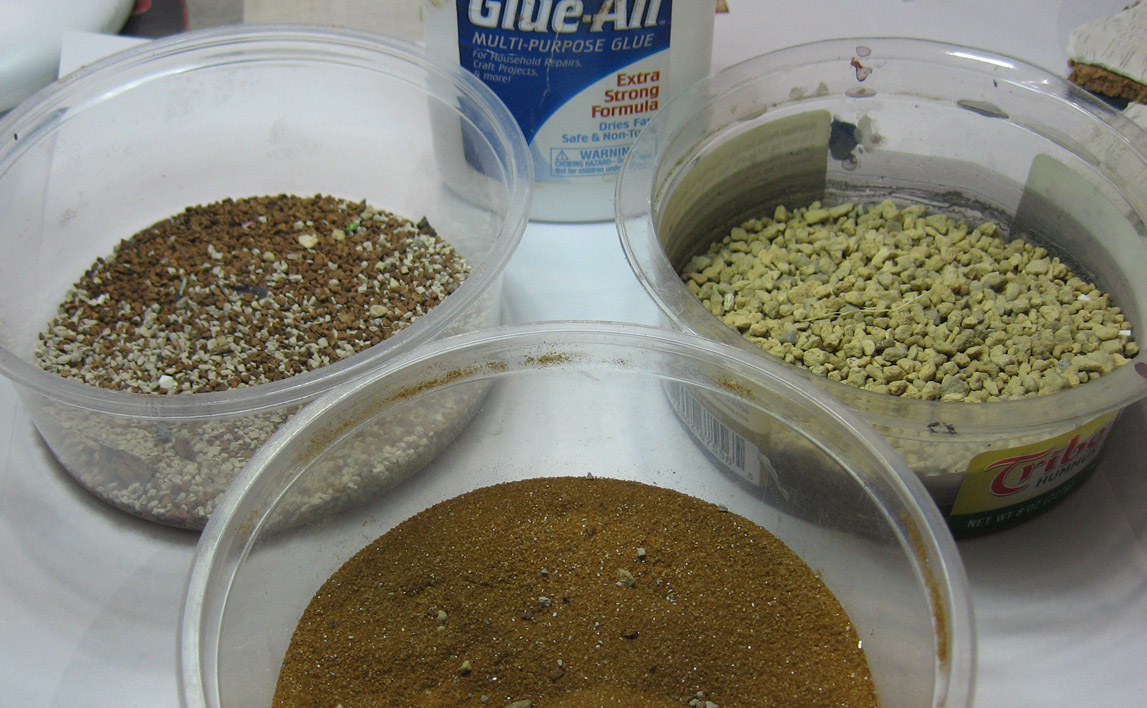 First, all of the open areas are covered with a fair amount of glue, so that I can add the heaviest rocks in the second step.  I always begin with the largest gravel first, so that I can place them exactly where I want, and then 'build' around them, as I do in the third step.

You can see that with each lighter grade that I add, space is still being left for the progressively lighter grades, such as the sand, which was added in the fourth step. 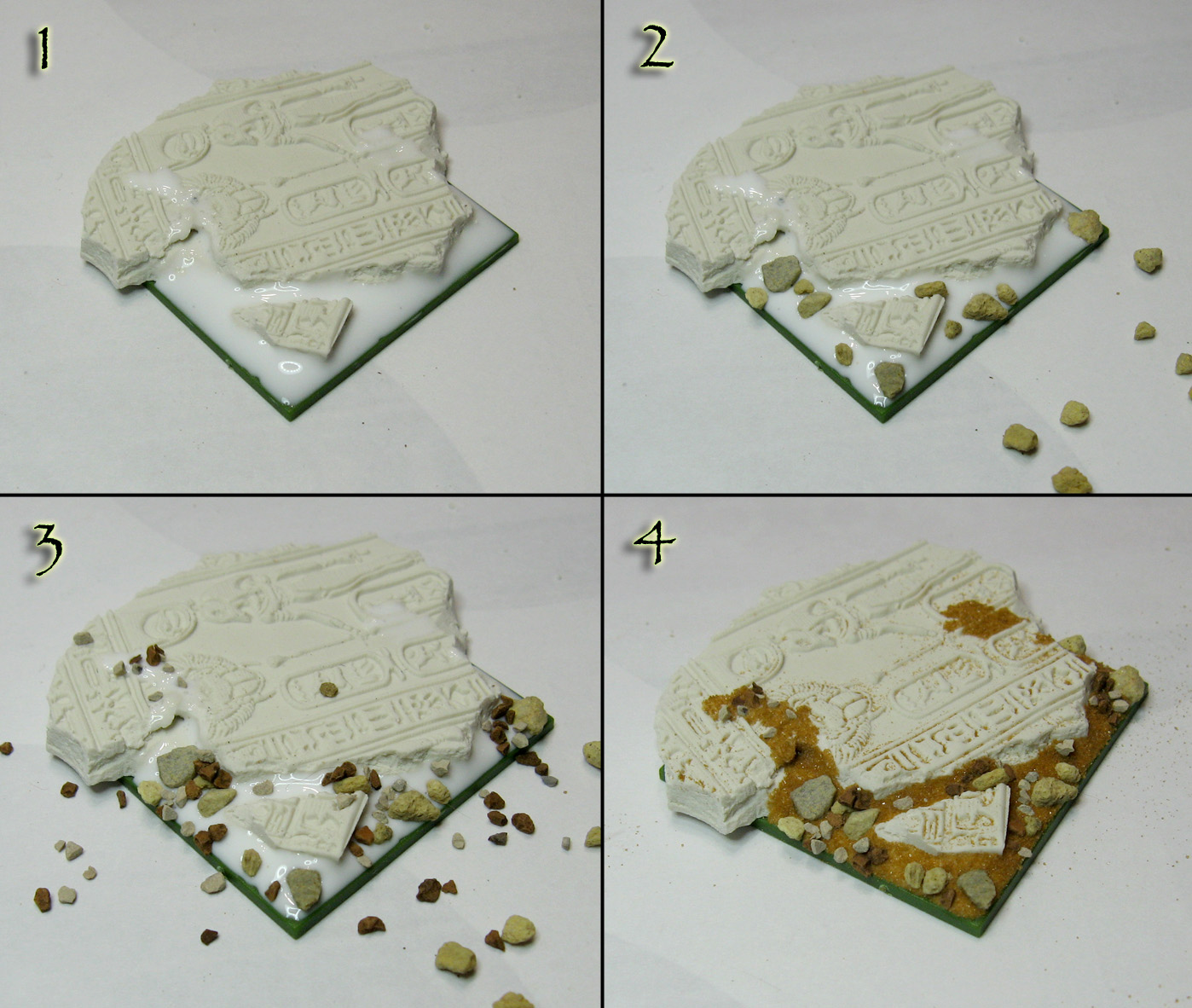 This process is repeated on all of the bases.  Every so often, I put a thin layer of glue over the carved textures, so make them seem like they have some sand blown over the top of them.  As with everything else, it is up to you how much or how little you need.

All of the bases complete!  If you have any skulls, scarabs, broken swords or even snakes, they can be added for an extra touch of ancient desert flavor!  When I put the miniatures on these, I will probably do just that... so stay tuned. 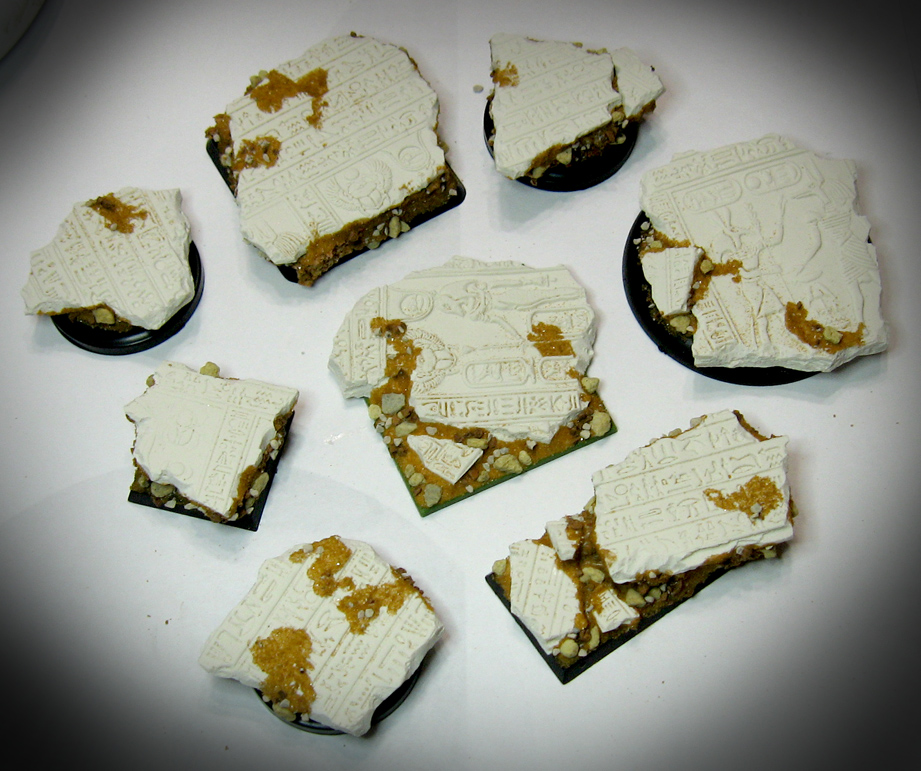