Secrets of the Past 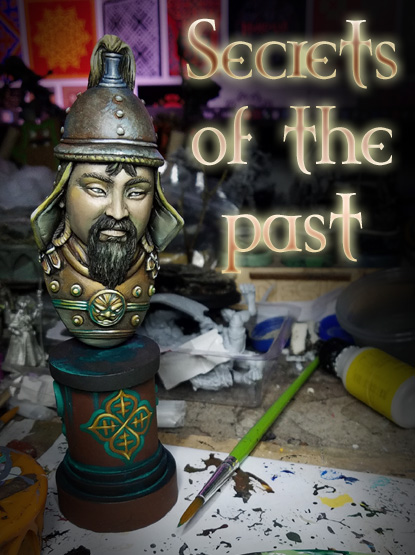 Continuing the finishing stages of the Black Heart Models bust means briefly switching to acrylic paints.  I will be using a few of the Secret Weapon Miniatures weathering paints, such as this Verdigris color.

The vast majority of the bust was painted in a Facebook live session here: 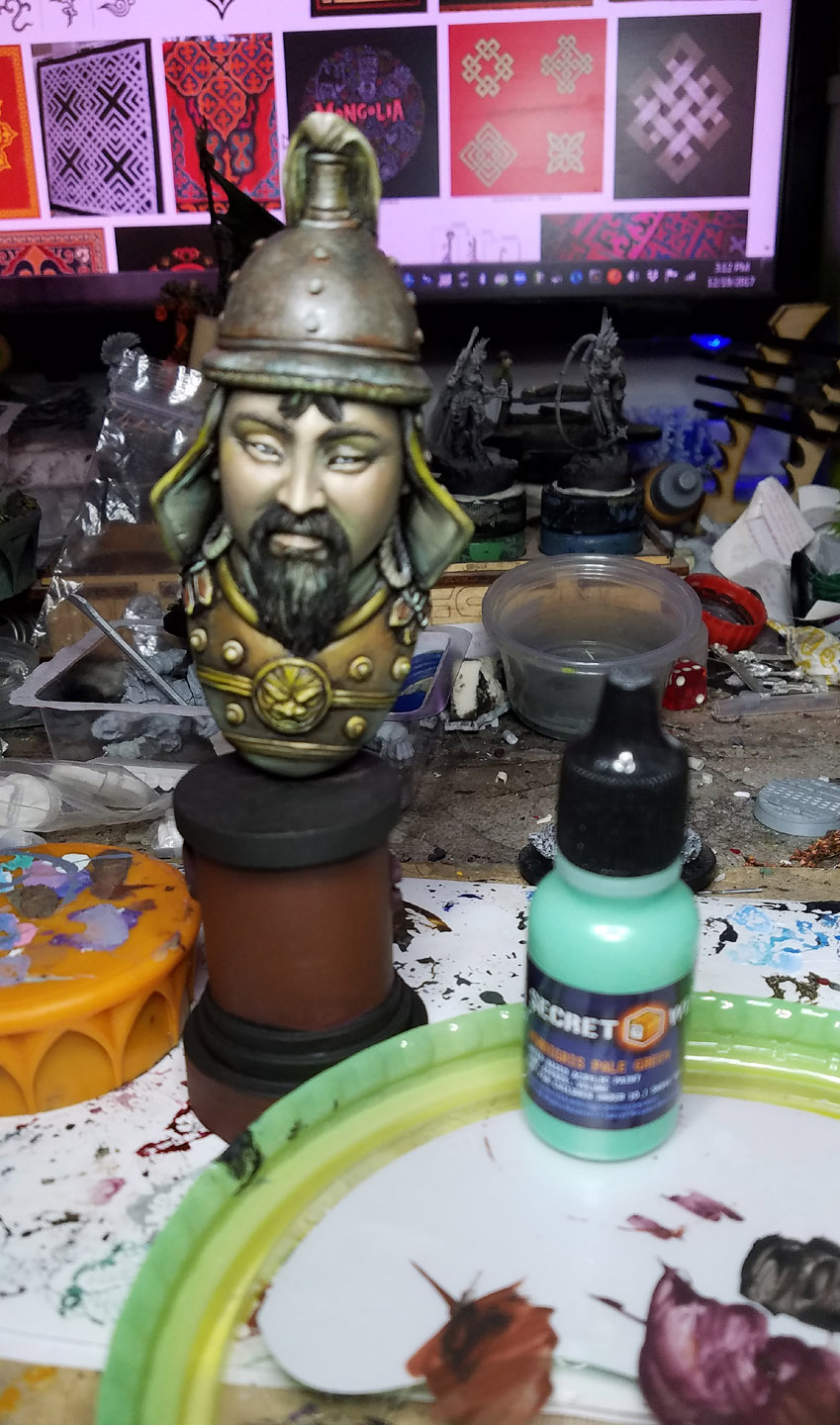 I darkened it with a bit of Emerald from Vallejo.  While I don't want to emphasize the copper too much, I thought that it would tie in nicely with the bust, the design that I will paint on the plinth and make the name plate on the back more integrated. 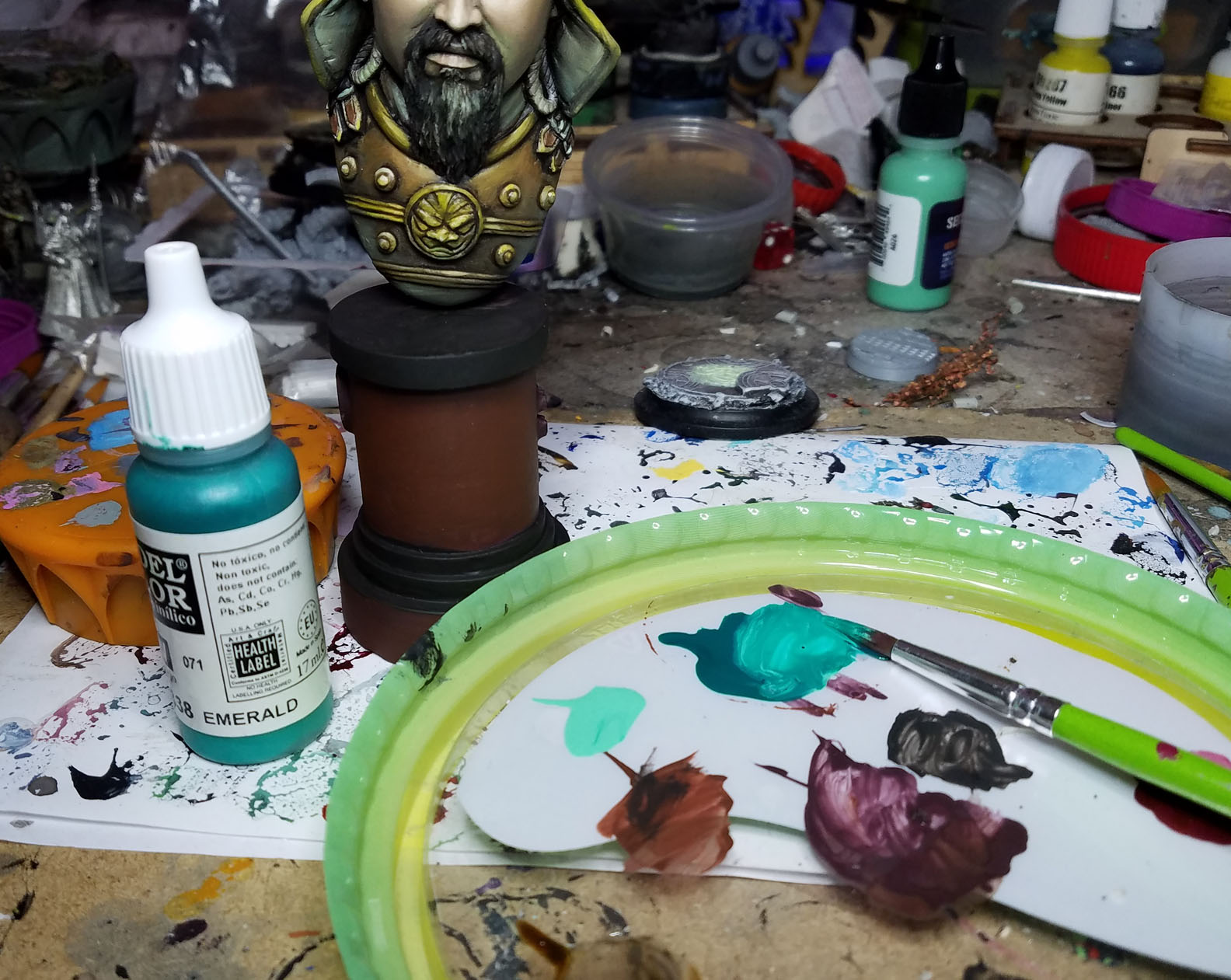 Speaking of the nameplate, you can see what I am talking about.  I thought that making it part of the weathering would make it interesting and less noticeable. 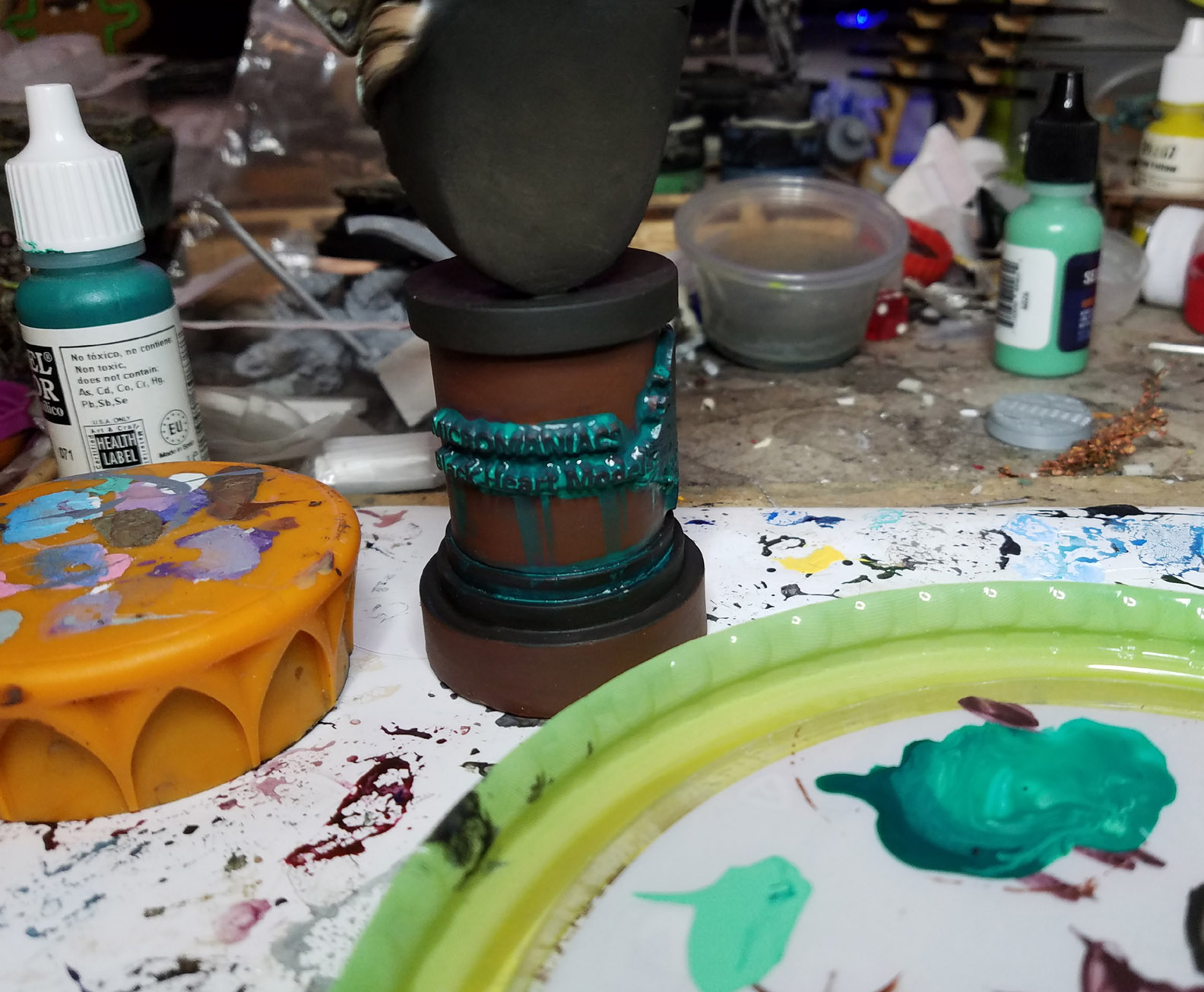 I tried to build up a bit of the verdigris on the upper surface as well.  This will continue up into the bust itself. 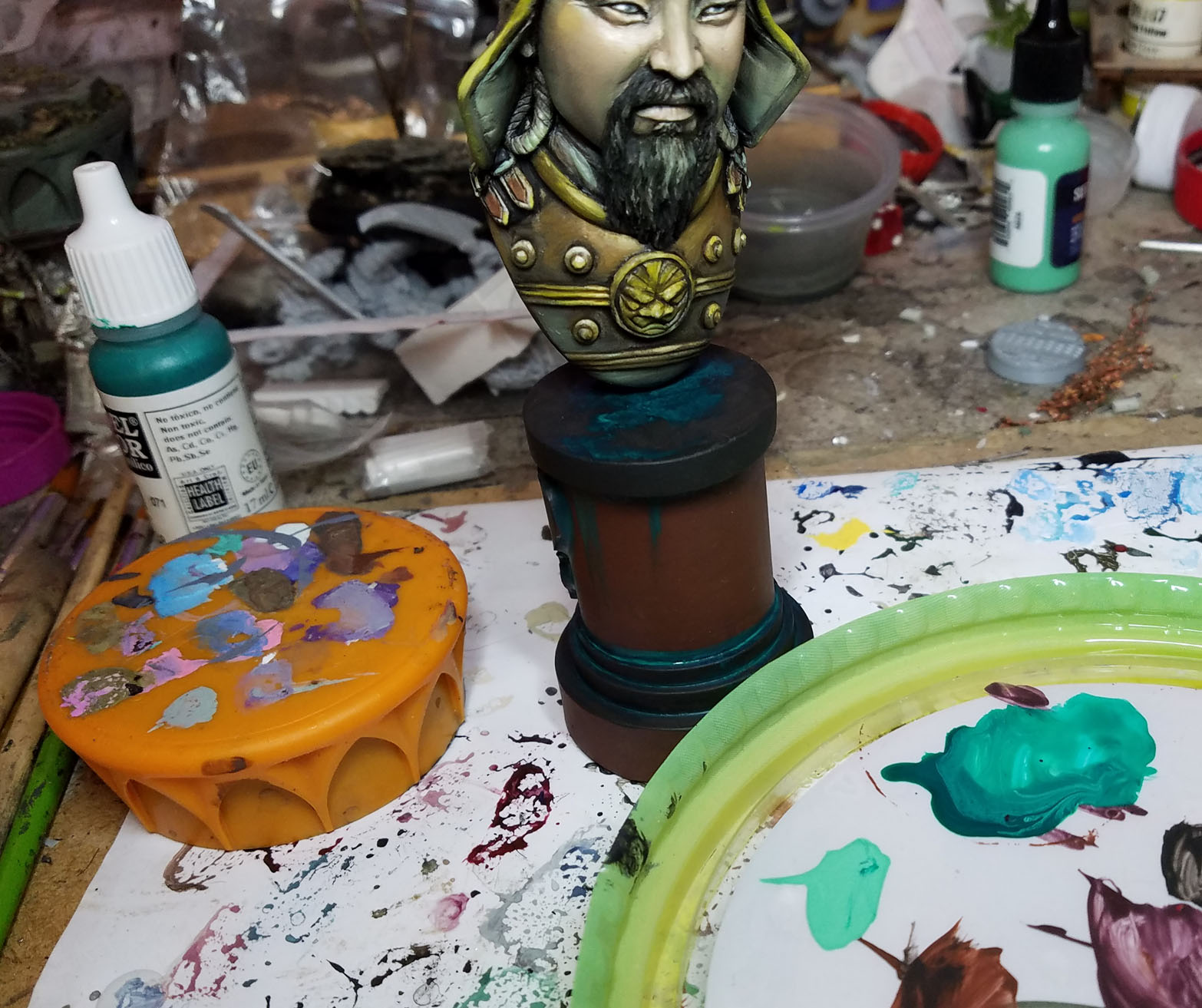 Once again, the company logo is worked into the weathering as I begin to do a few streaks. 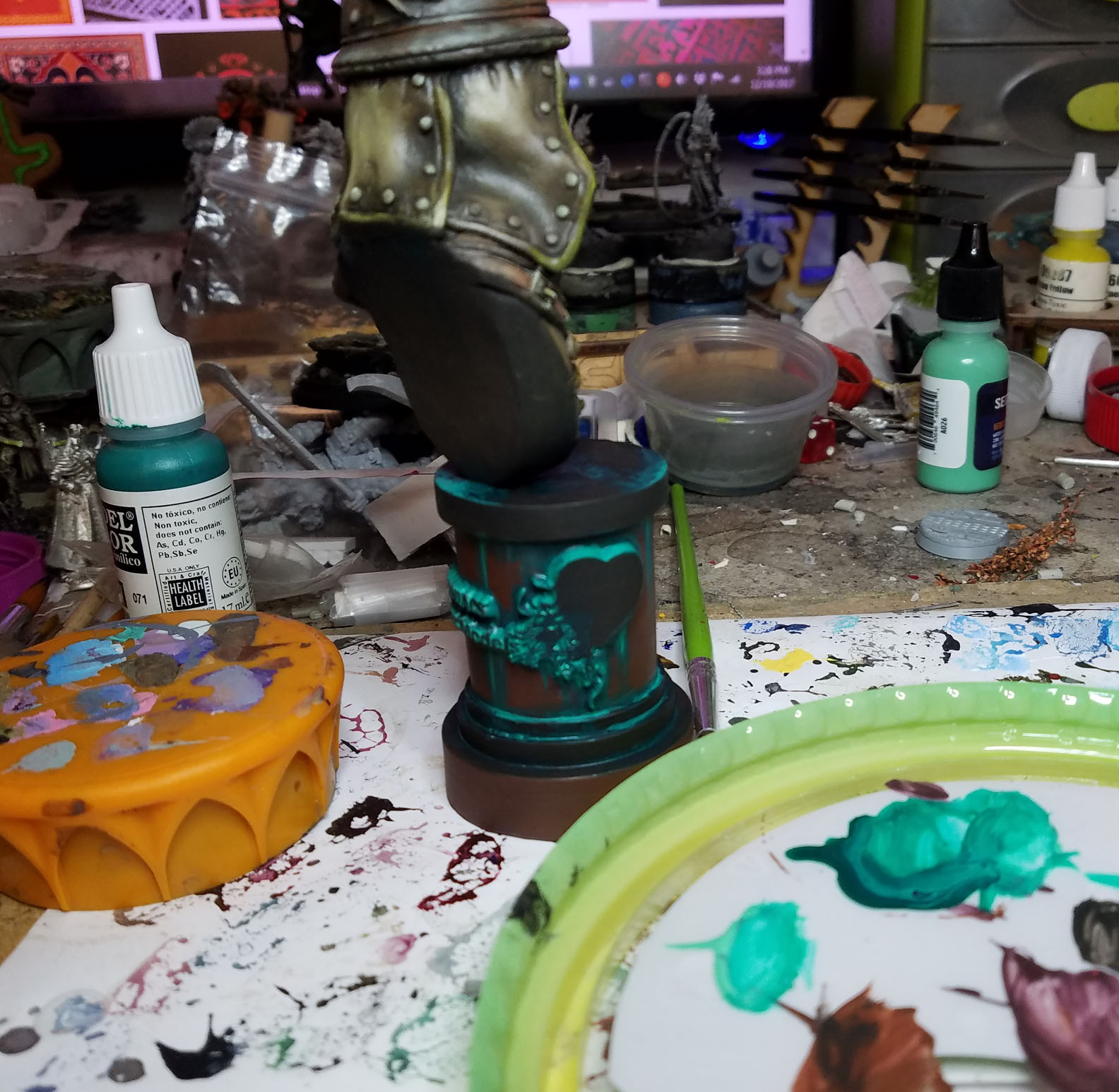 I did some more streaks on the front of the plinth, and then did some research to look for Mongolian designs... 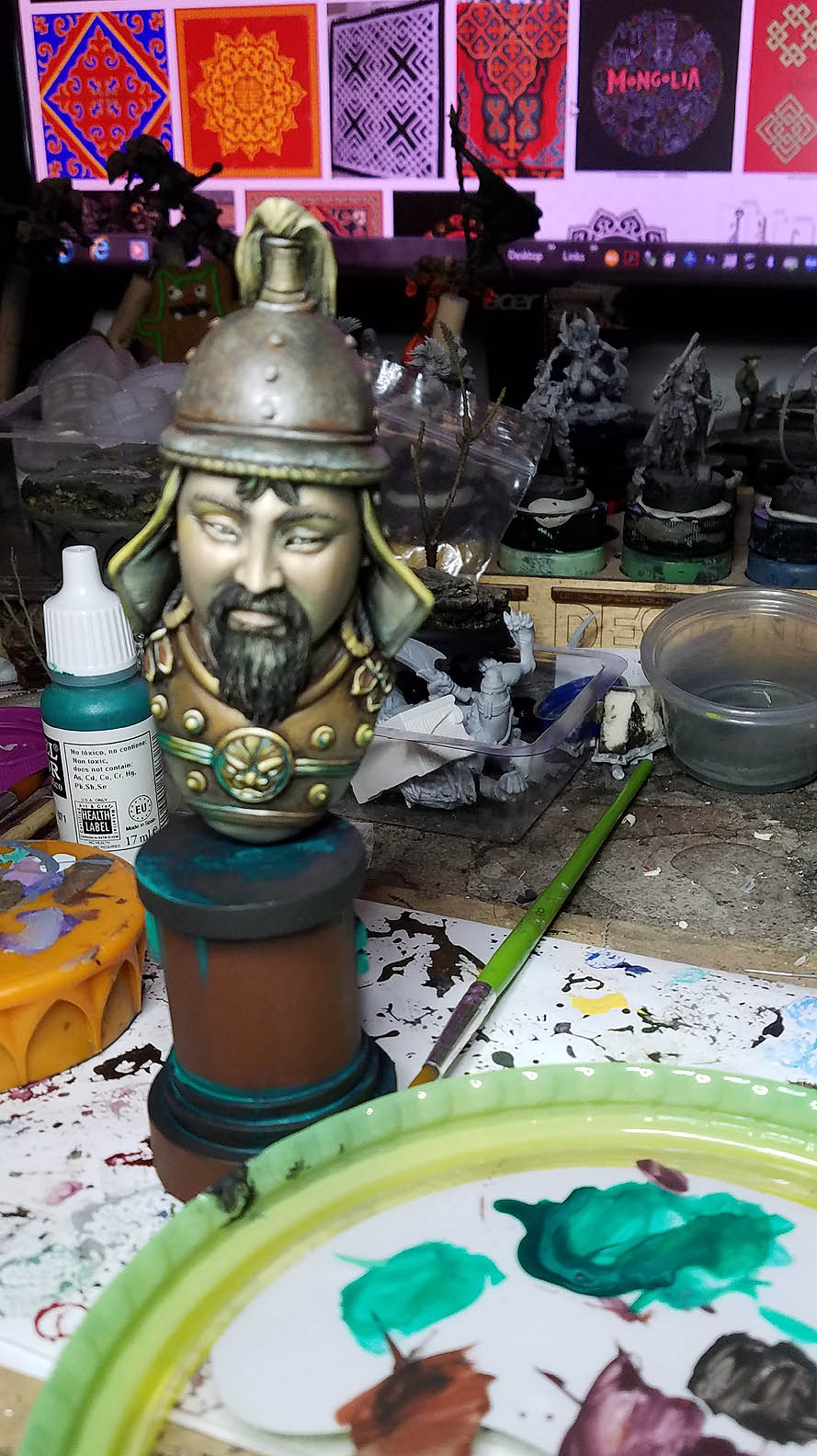 I tried to stick with something simple, and that would lead up to the face, and work with the medallion on the chest.  I thought I could get away with one burnt sienna tone and the verdigris colors in combination. 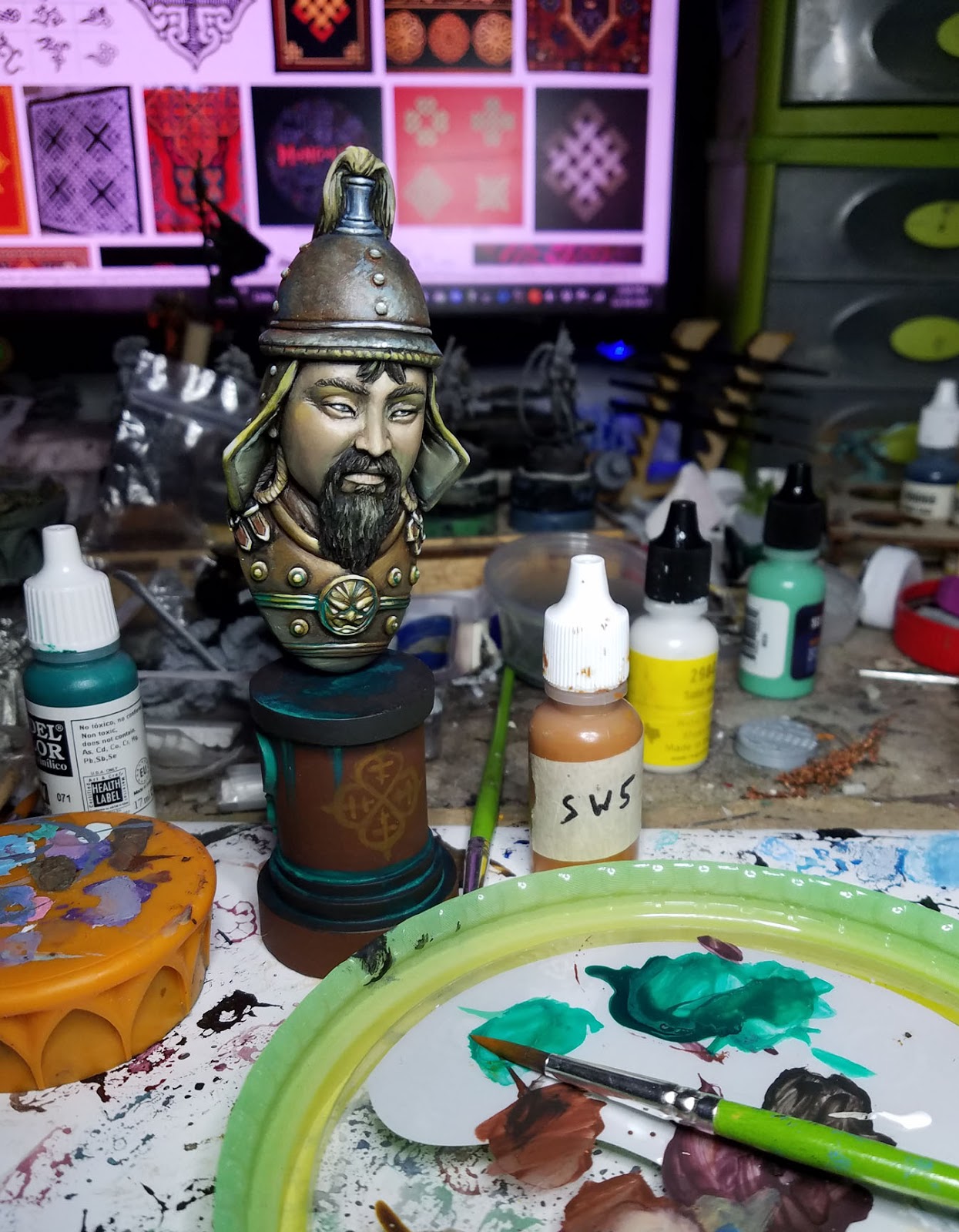 The design is hashed out a bit more, checking to see how much attention it might draw away from the bust itself. 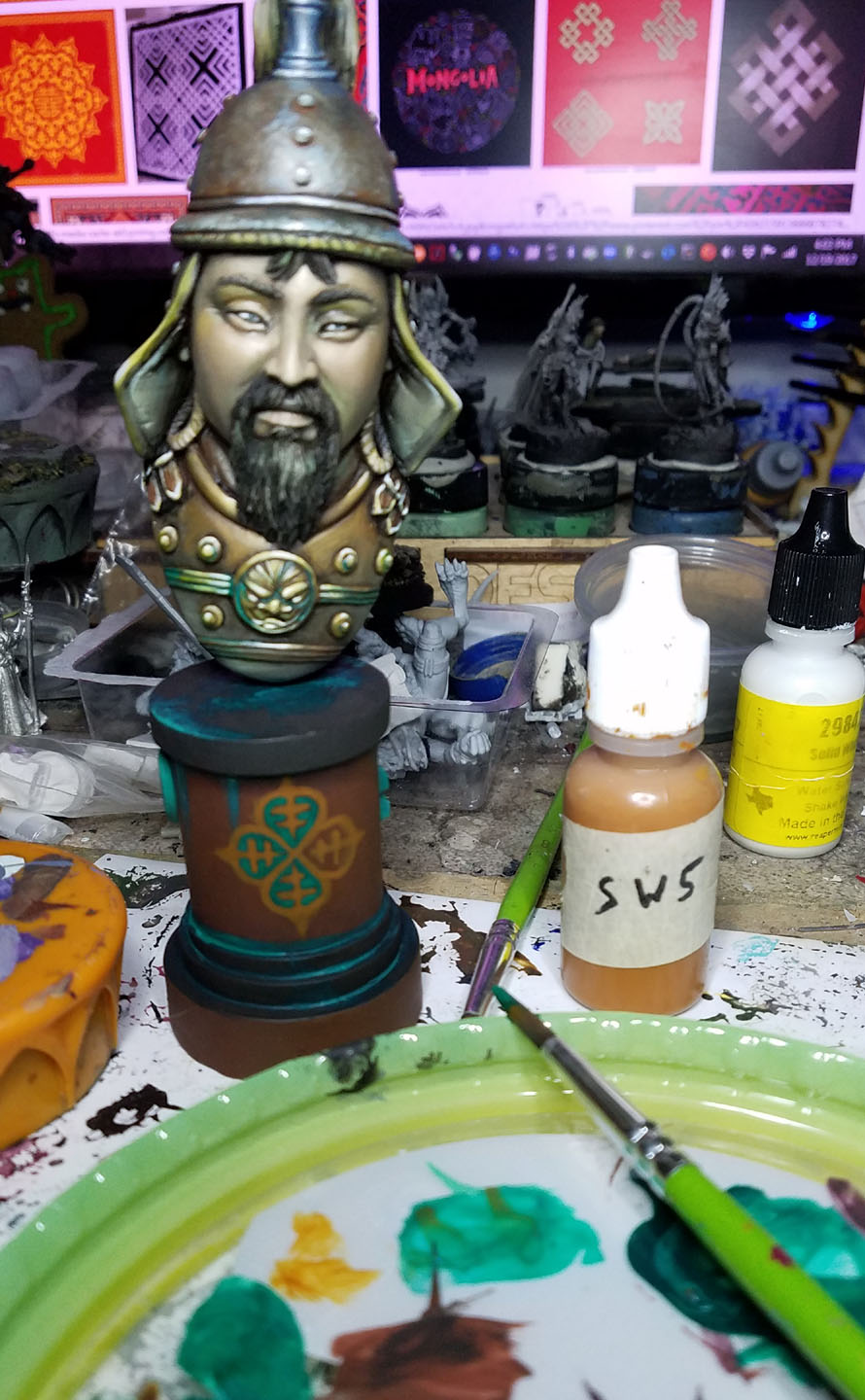 Instead of doing a series of outlines as I saw in the reference image, I thought I would do some shading of it instead.  This way I could tone down the design a little if it became too much. 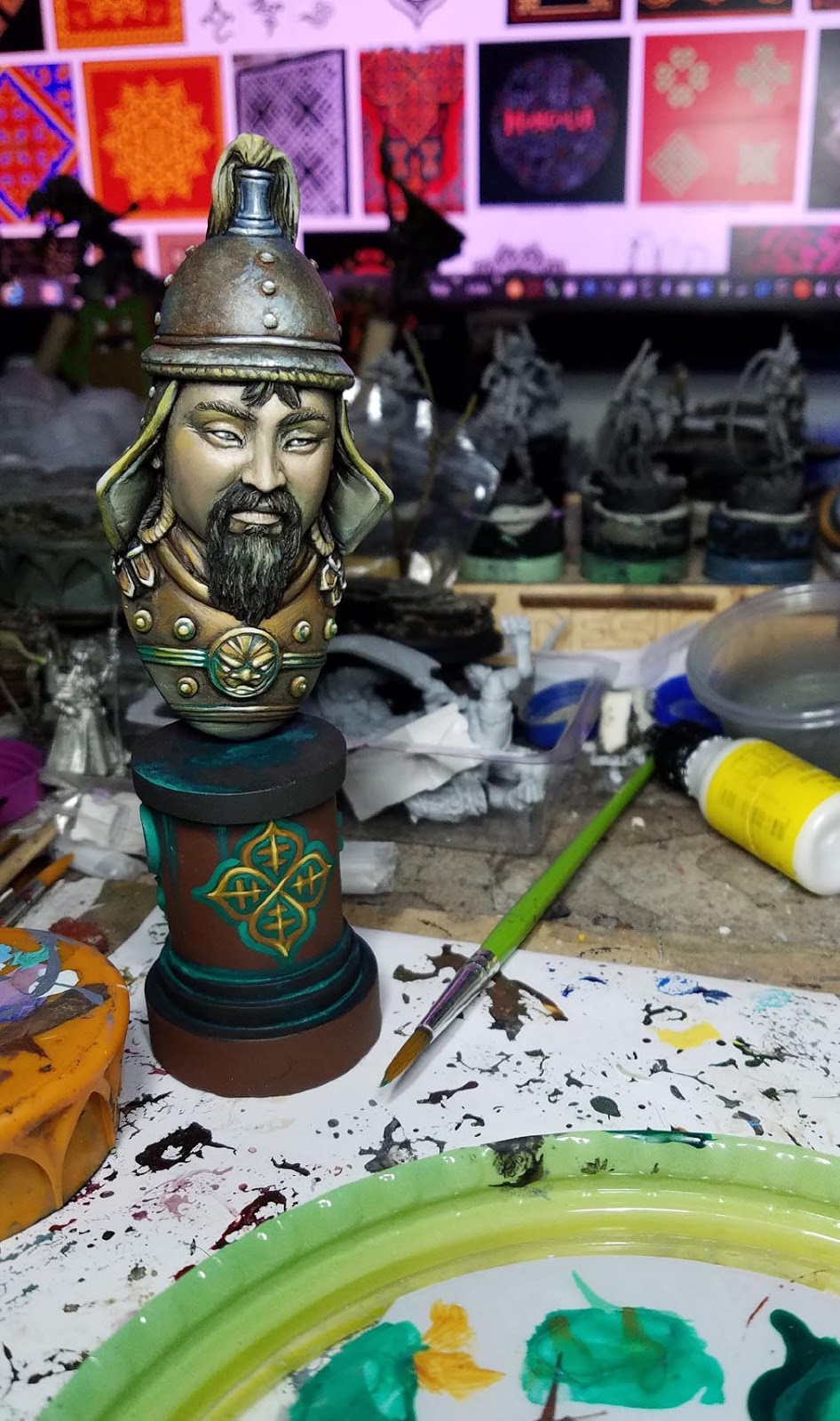 Just about done!  There will be another post coming up with the final images of the whole piece.

I have a few more of these fantastic busts from Black Heart Models that I will be painting in Facebook Live sessions, and also in special Patreon videos.  They might even be one of the monthly figure raffles as some point.  If you would like to join in on the fun, the Patron page is here: 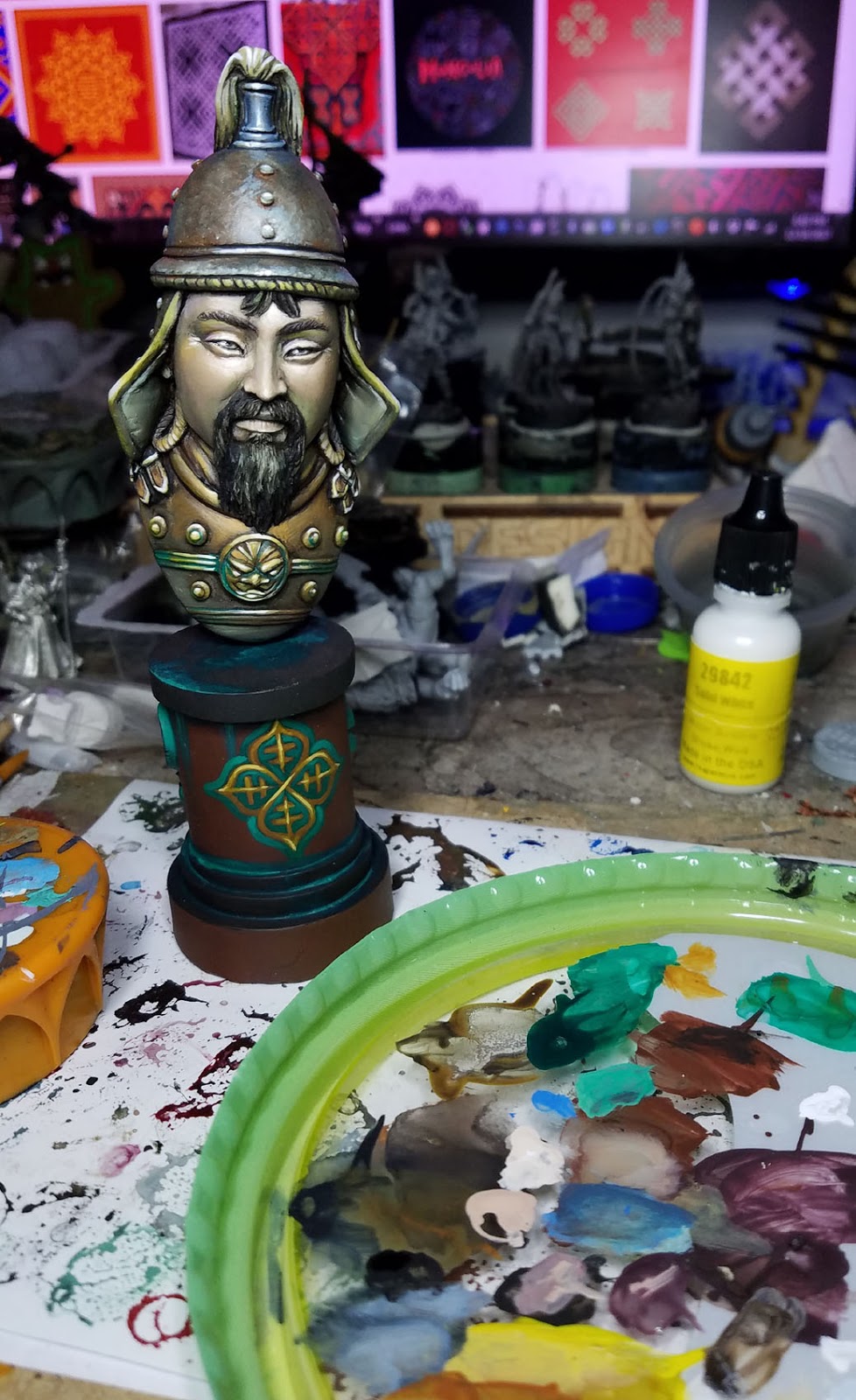