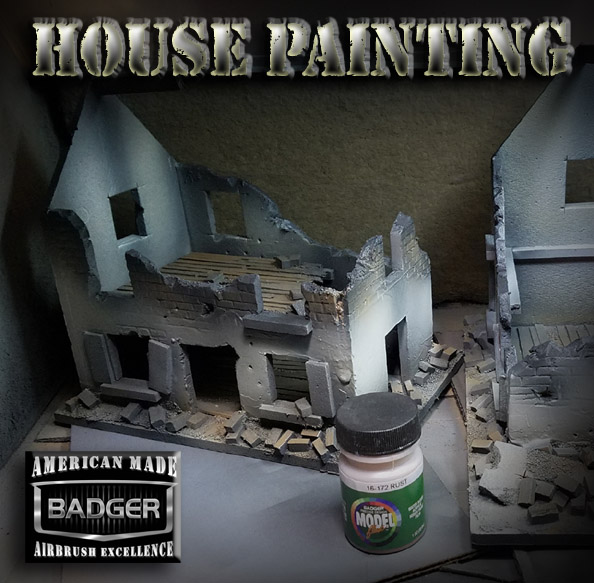 After allowing the glue and oxide paste enough time to dry thoroughly, it was time to get some paint on these ruined buildings!  Using the Badger airbrush (Patriot 105) and some primers would not only make this task faster, but save some abuse on the buildings by not hammering away at all the deeper areas with a brush! 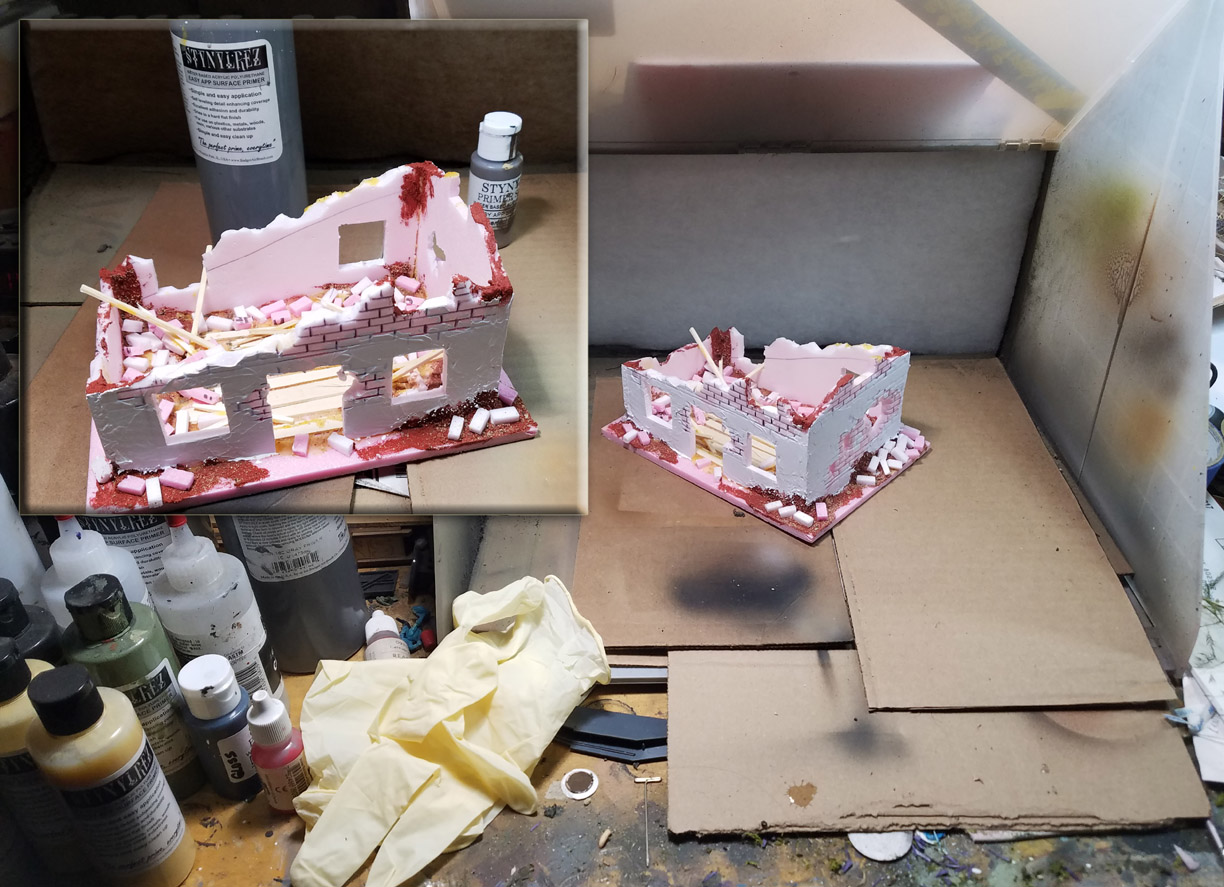 I decided to start with a neutral gray Stynelrez primer to seal everything in, and set the stage for the other muted colors. 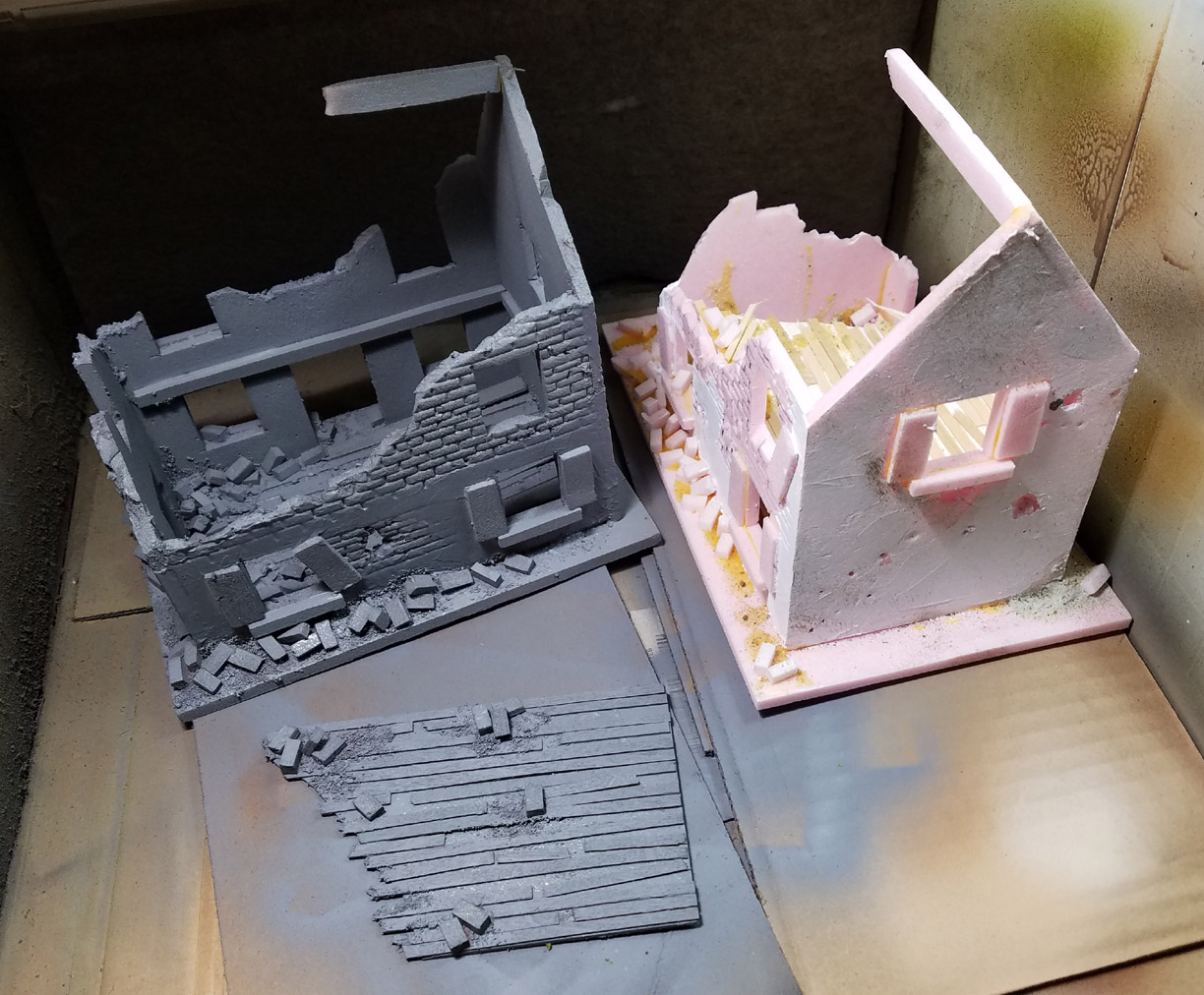 I tried out these "terrain paints" from Badger for the first time.  They are like weathering powders in a way, comprised of many earth tones and greens.  I thought they might be handy for the brick piles, exposed wood and brick, etc.

I began with the Weathered Black, which was a darker, warm grey. 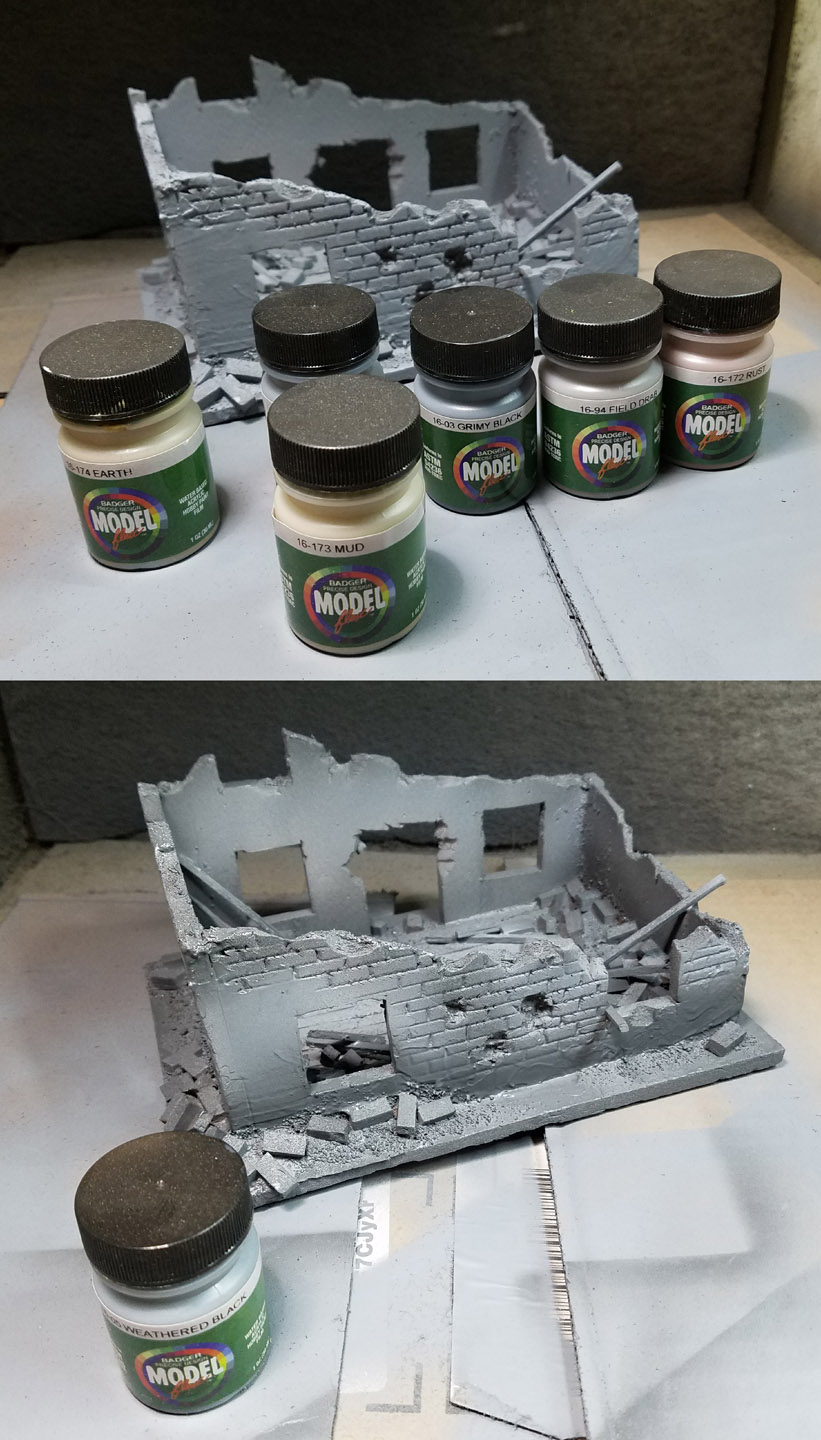 I worked on all 4 buildings at the same time.  On the "intact" building, I will be putting printed carpets on the floor.  The walls will have wallpaper, just like the ruined structures.  So, the interiors walls were kept pretty simple, focusing on darker grays in the corners.

I also made sure to have some darker shading around shell holes and over the burned out windows. 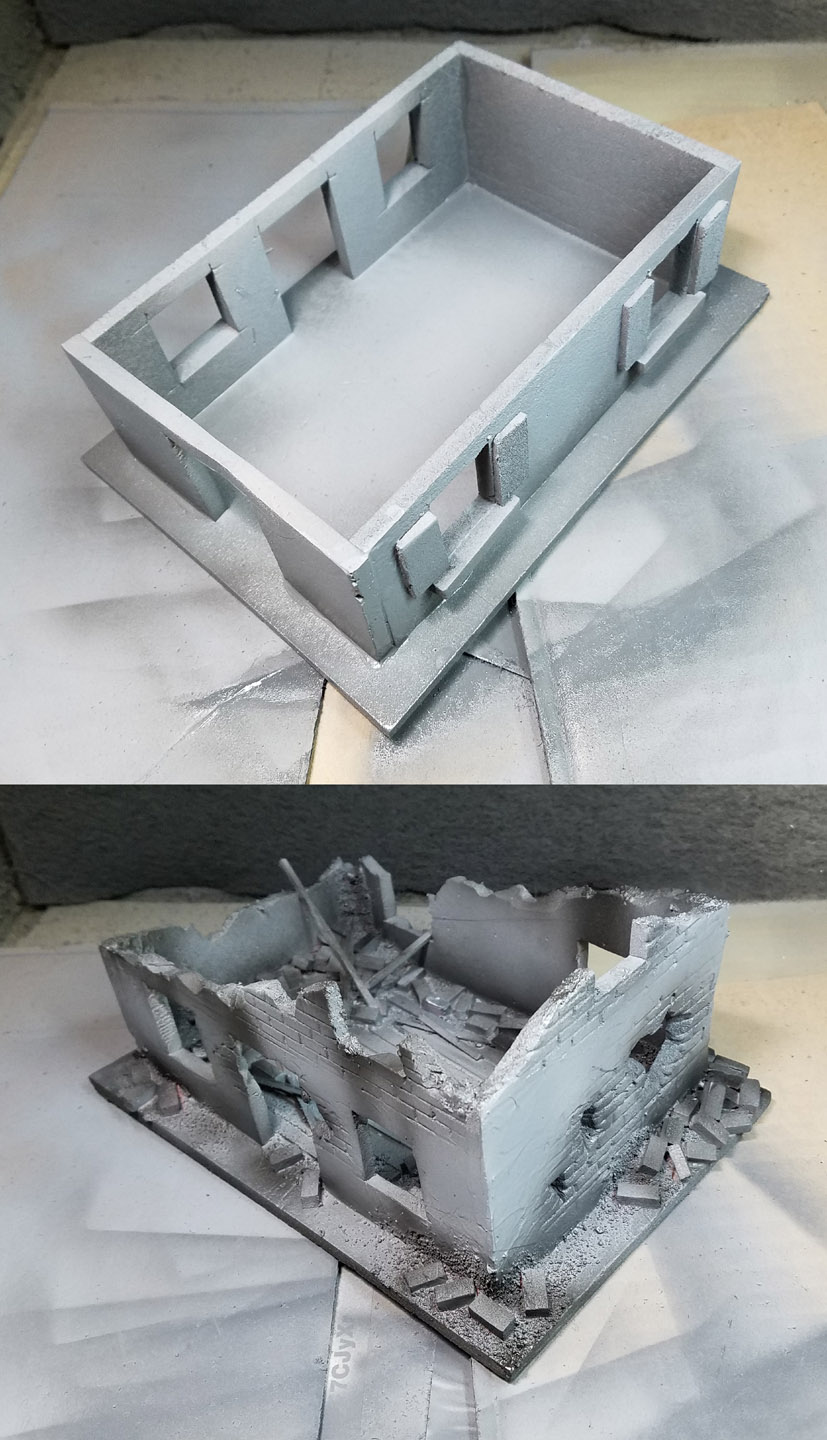 The airbrush certainly made it a lot easier to reach all those crevices, especially on the multi story ruins.  It also meant that I didn't have to risk breaking away my bricks to get color down underneath them! 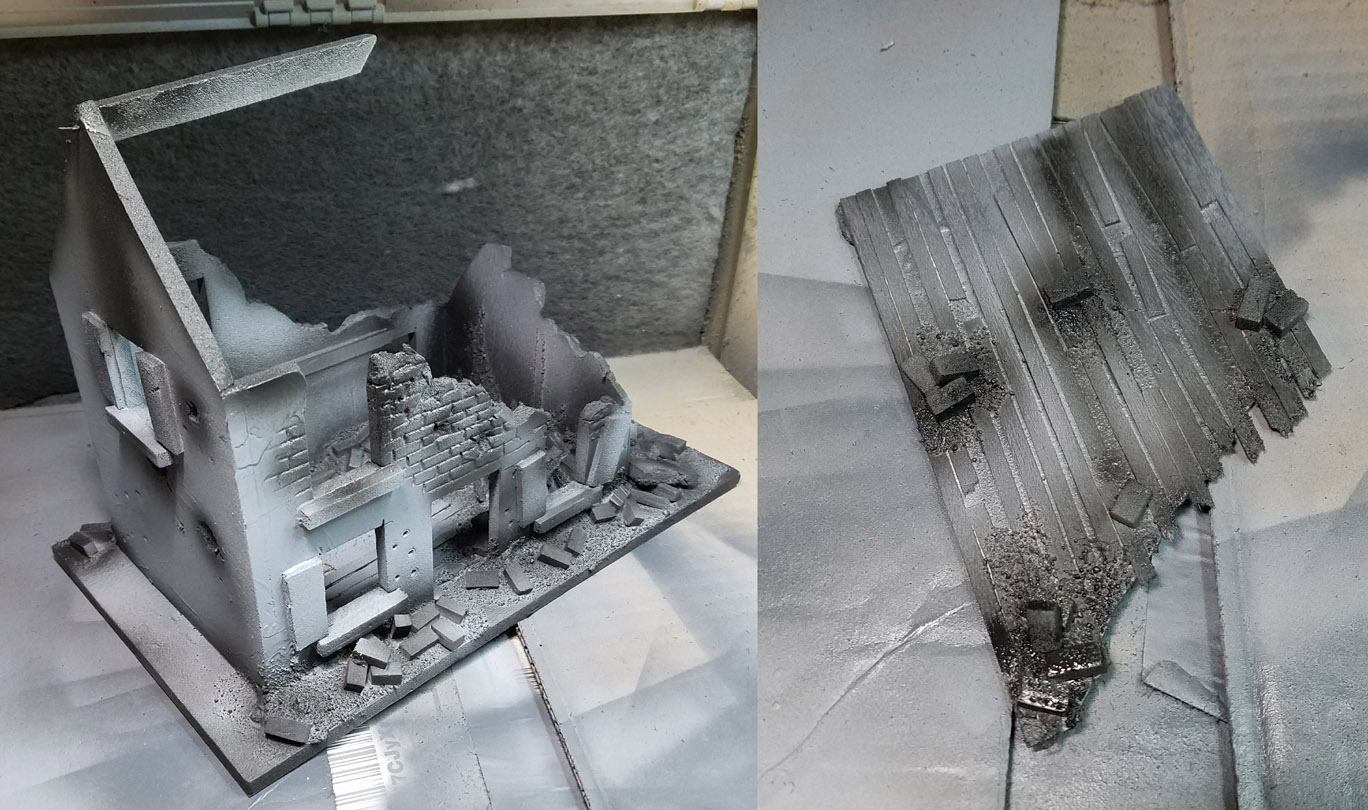 Once I had established where the darks would be, I began to work lighter, trying to catch some of the highlights without getting too bright.  I still have to add the browns and reddish colors for the bricks! 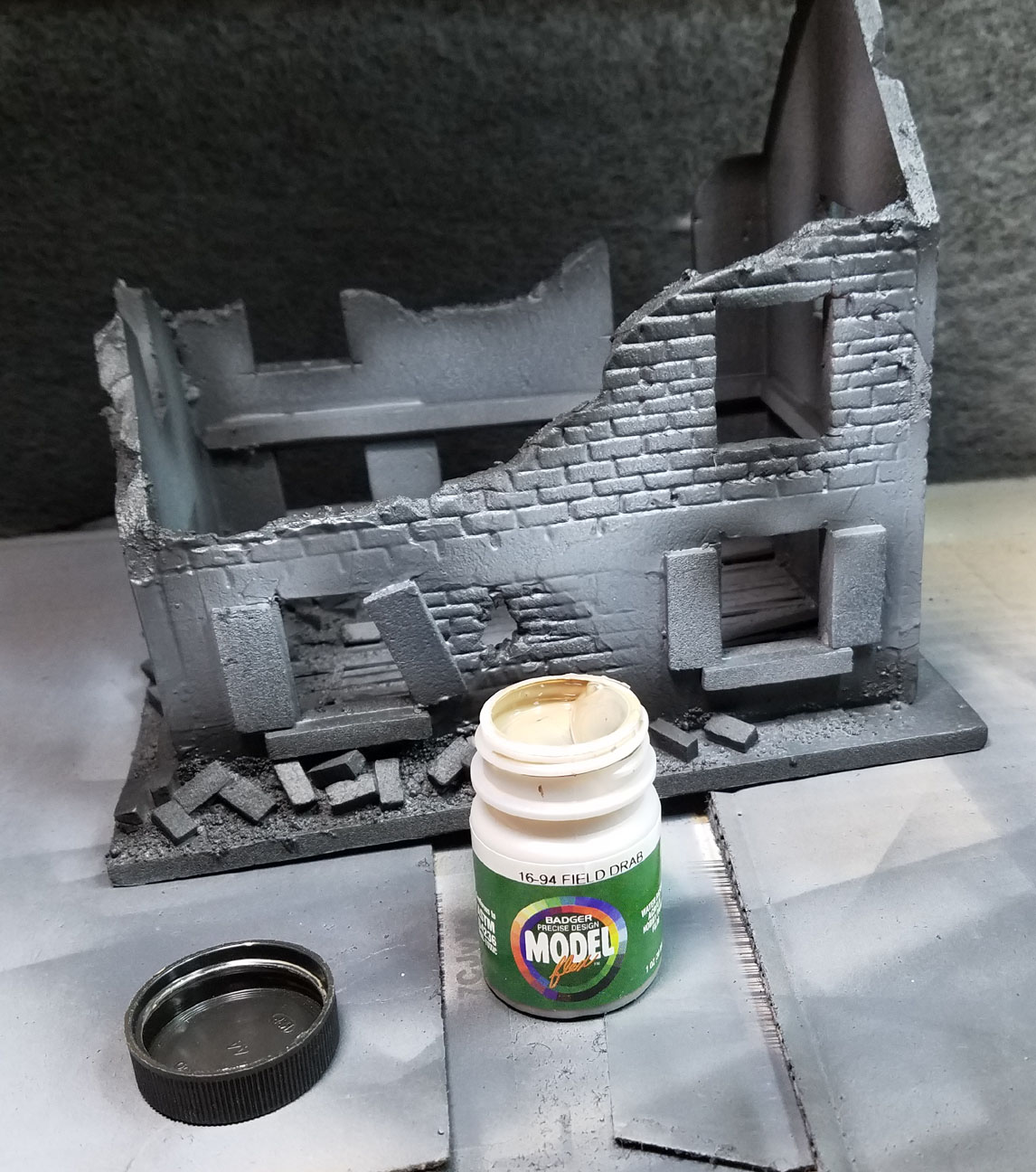 You can see the difference in tone once those warmer colors are added.  This is why I wanted that neutral grey to start out, so that the browns and reds would not be as intense as they might have were these primed black instead. 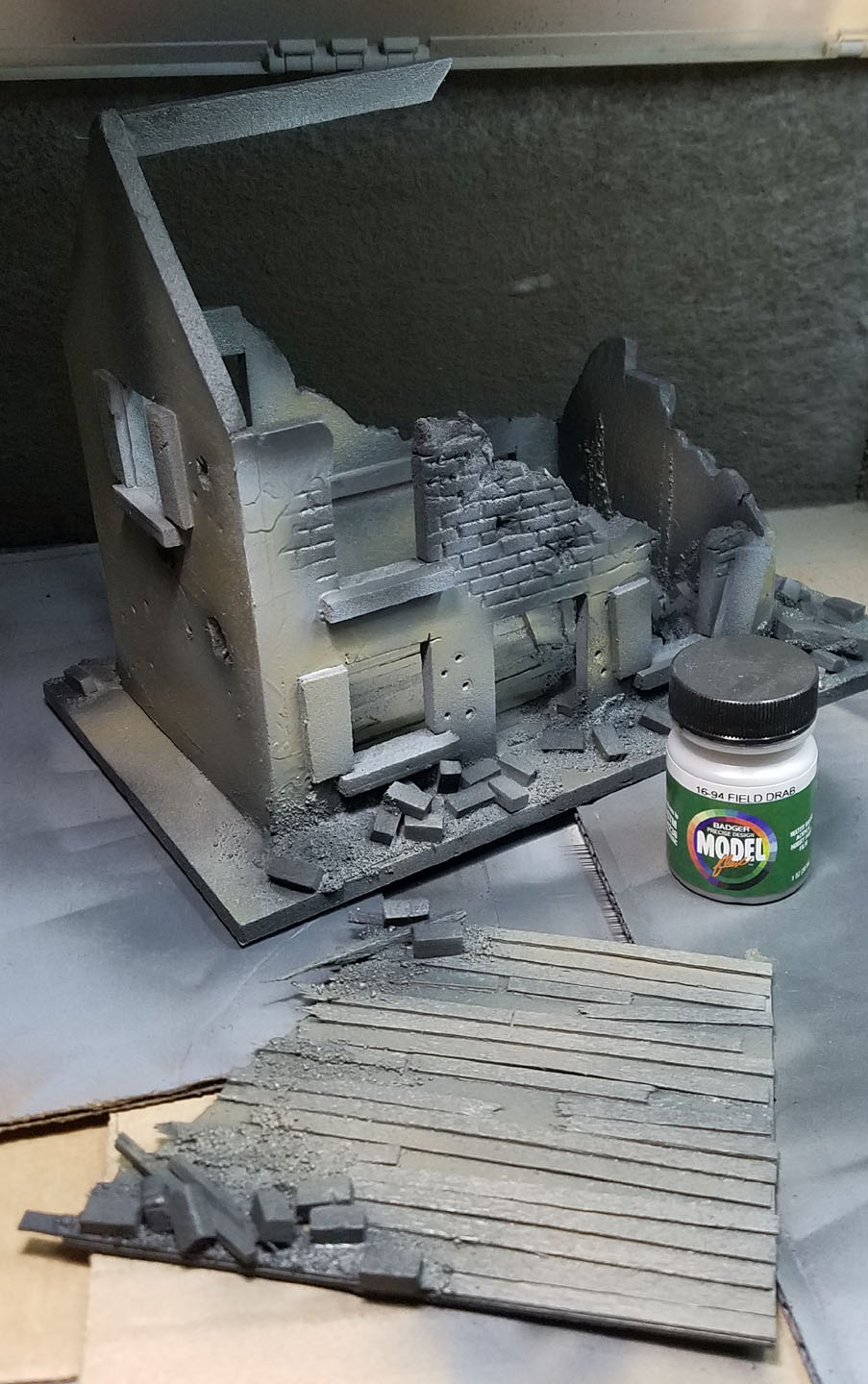 The open ruins structure shows off those warm colors.  Keep in mind that many more layers of powders and other paints will be added!  These are just the initial shaded basecoat setup layers. 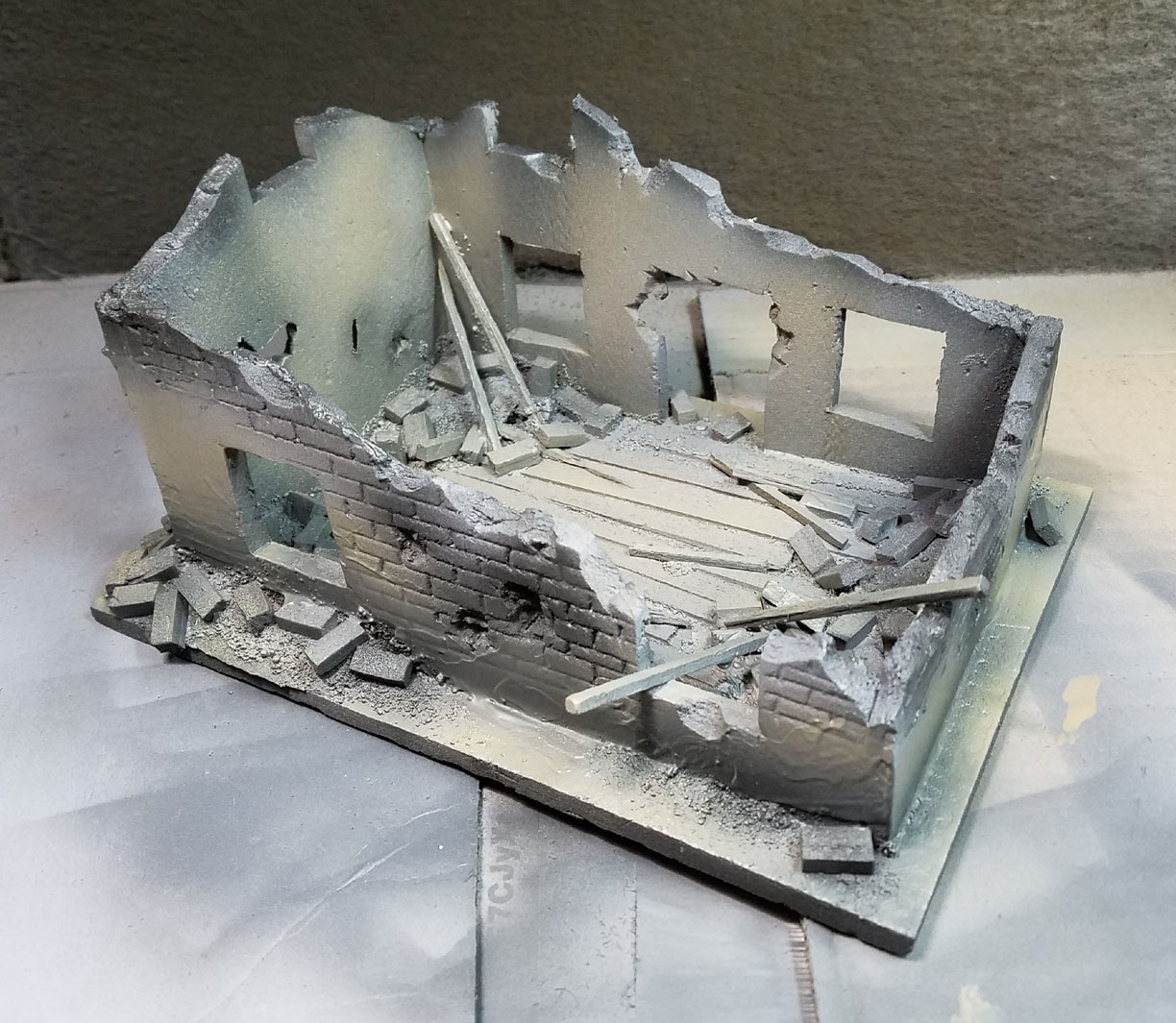 You can see the color temperature difference even more on the intact building as the warmer lighter colors contrast with the cooler gray. 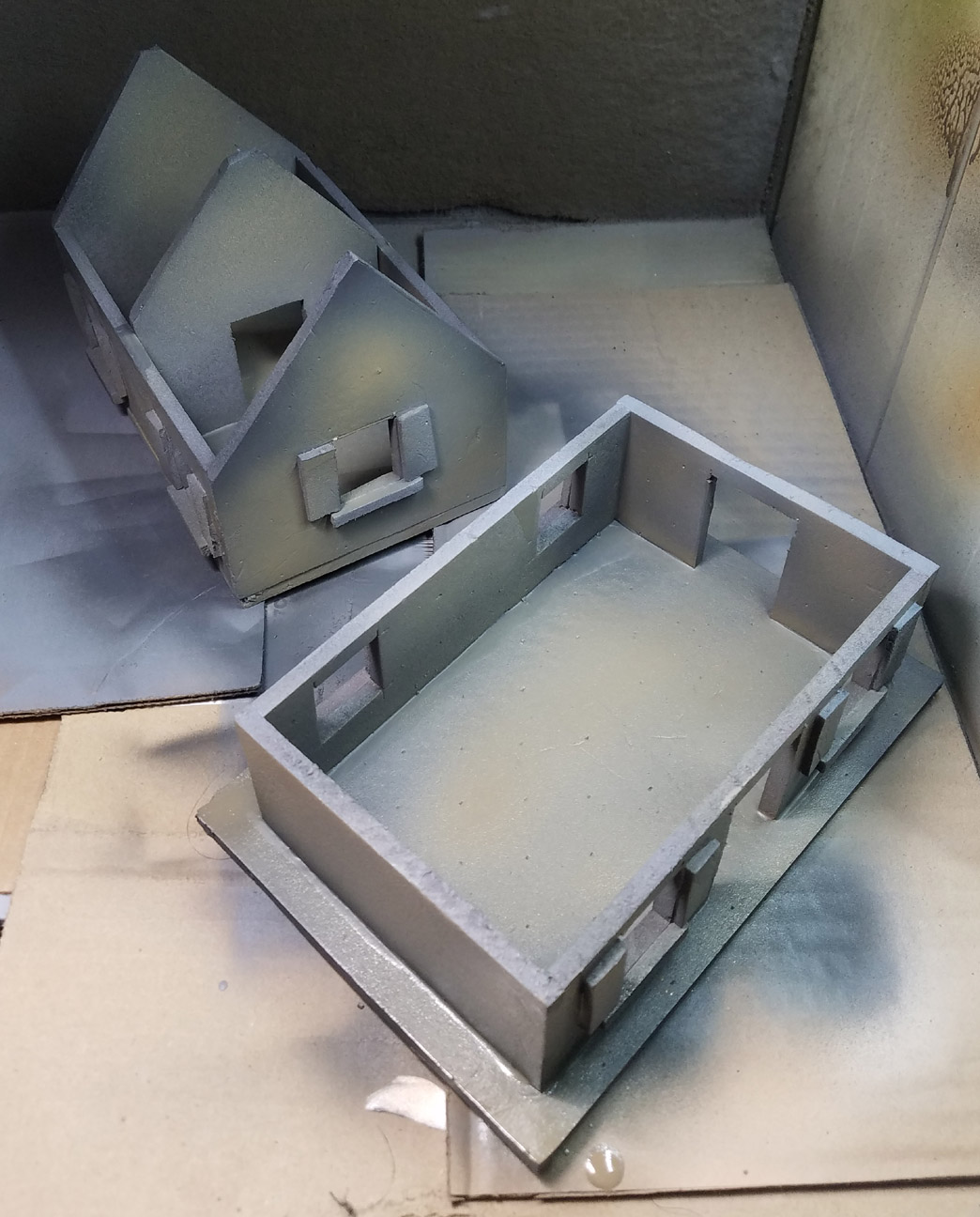 An even lighter series of tan/creme colors were applied to give more contrast to the outer walls. 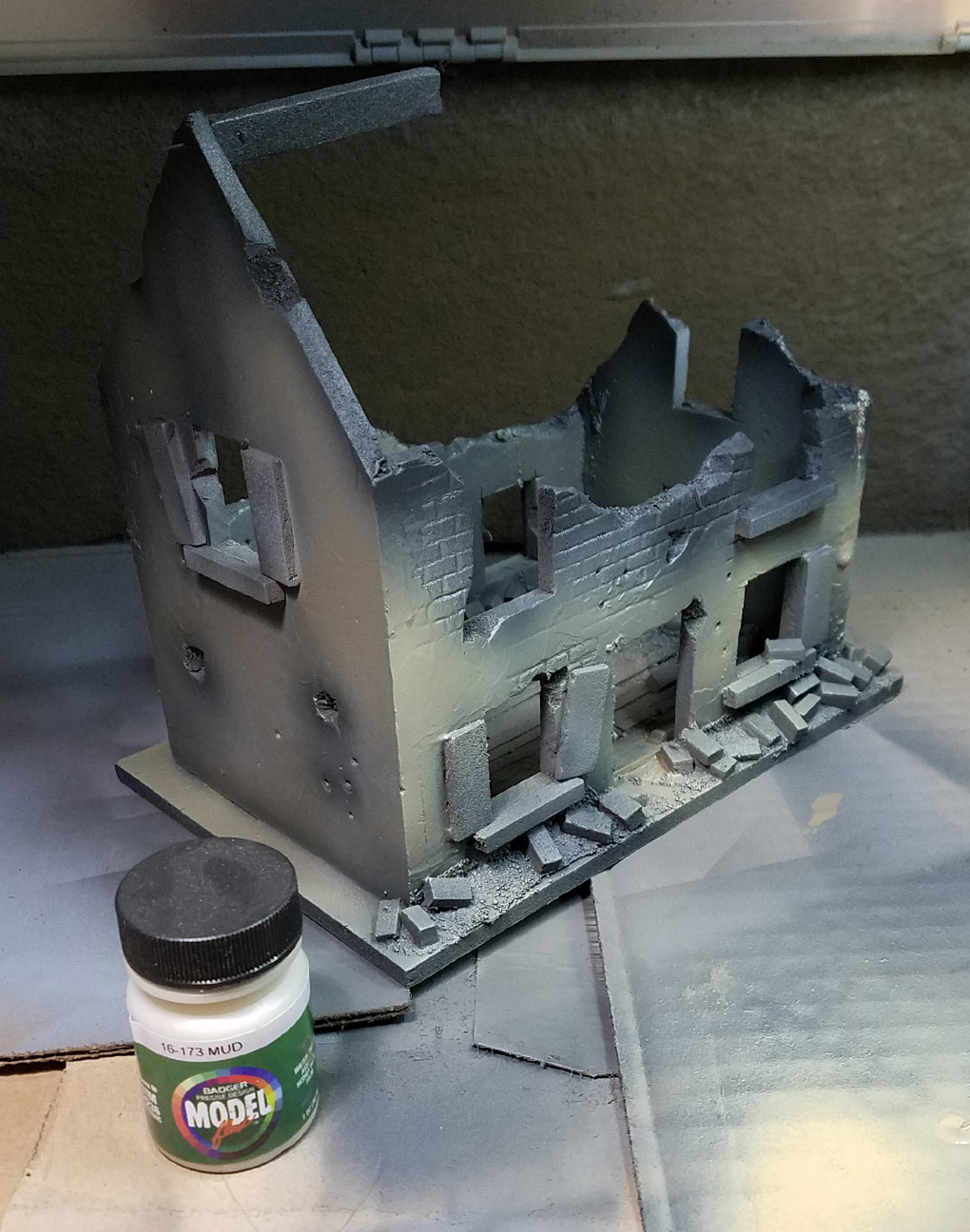 You can see that I am trying to create stains and scorch marks already.  These will be further enhanced with more details later. 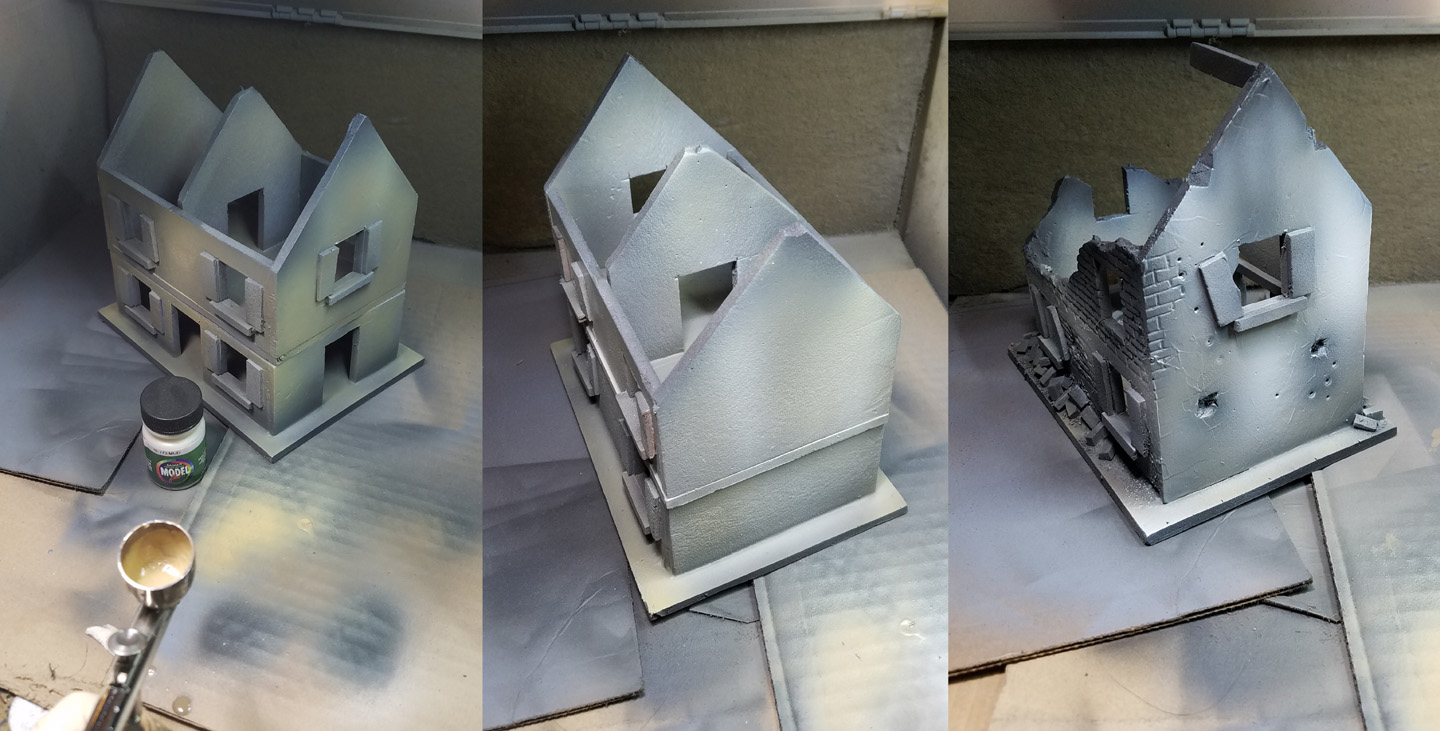 A reddish color was sprayed on the exposed brick walls and the piles, making sure not to get too much of a "single color" look.  I have some very fun details that will be added to the bricks to bring them out even more that I will show you in a future episode. 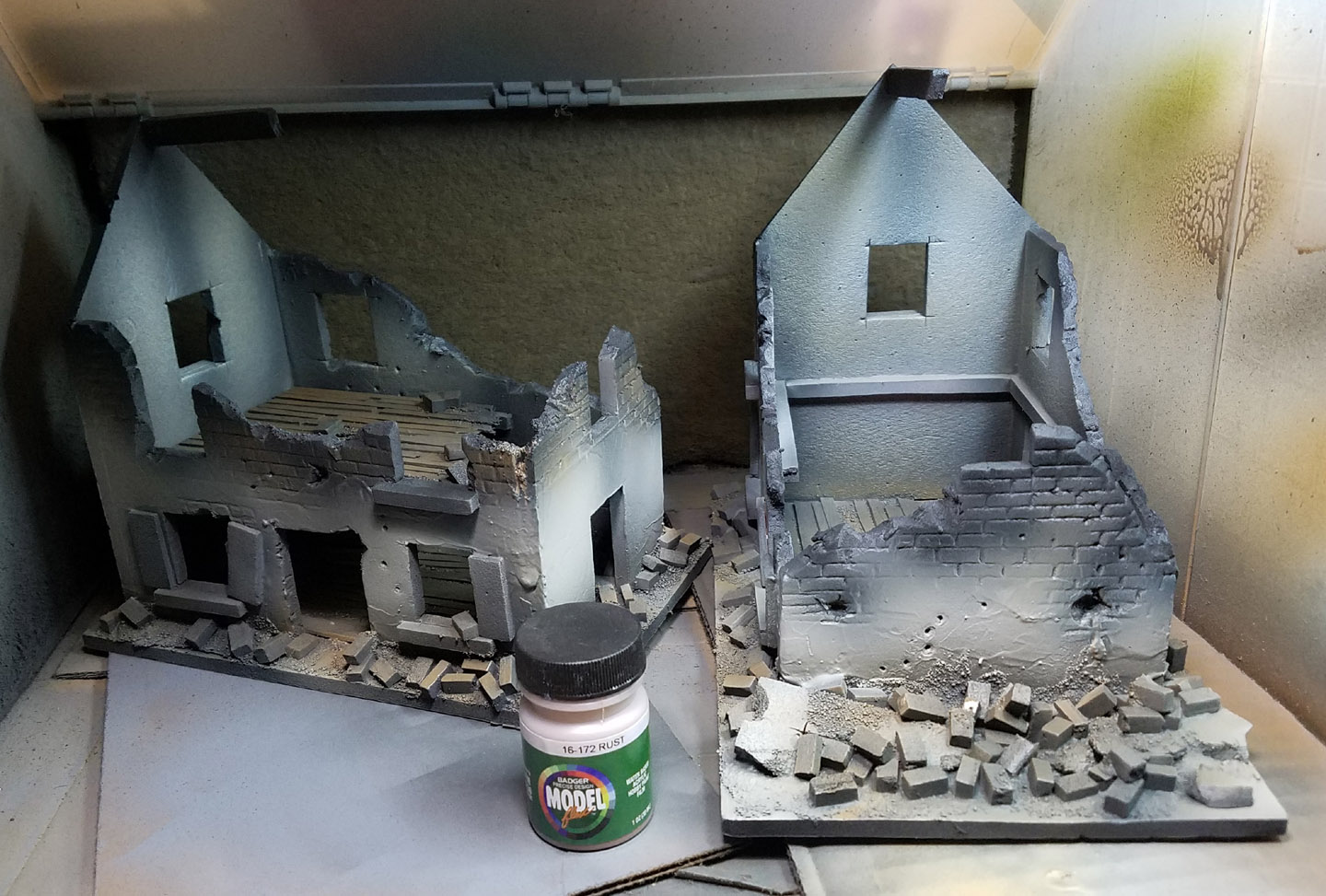 The next episode will feature something very interesting!  I am going to use one of my old spacescape painting techniques in order to lay out where the shattered walls will expose the darker bricks.  Stay tuned!

By the way, you can get these Badger airbrush products at Webairbrushes.com with a link below.  If you use the coupon code wappellious, you will get a 42% discount. 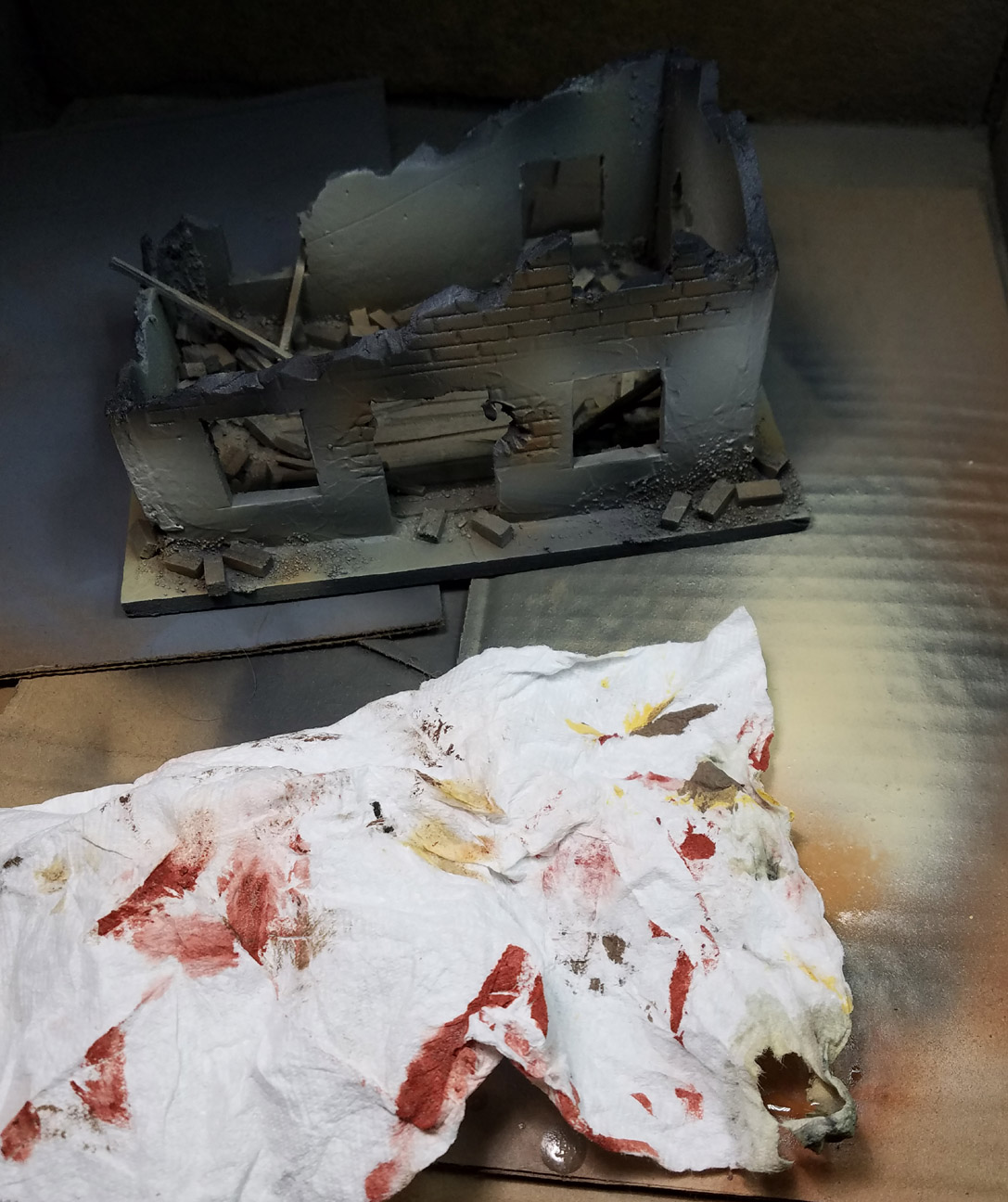