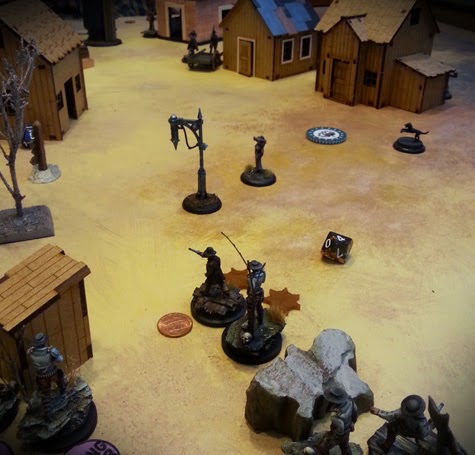 When we last left our intrepid Lawmen, they had set themselves up for a cleansing march through the streets of Wappelville.

Snipers had taken positions overlooking the objectives, and the Lawmen were shoulder to shoulder around Deputy Berenger.  There were objectives in a few of the buildings, one in the center, another under the water tower... and finally one in the outhouse.  Not sure what was in there, but it must have been important! 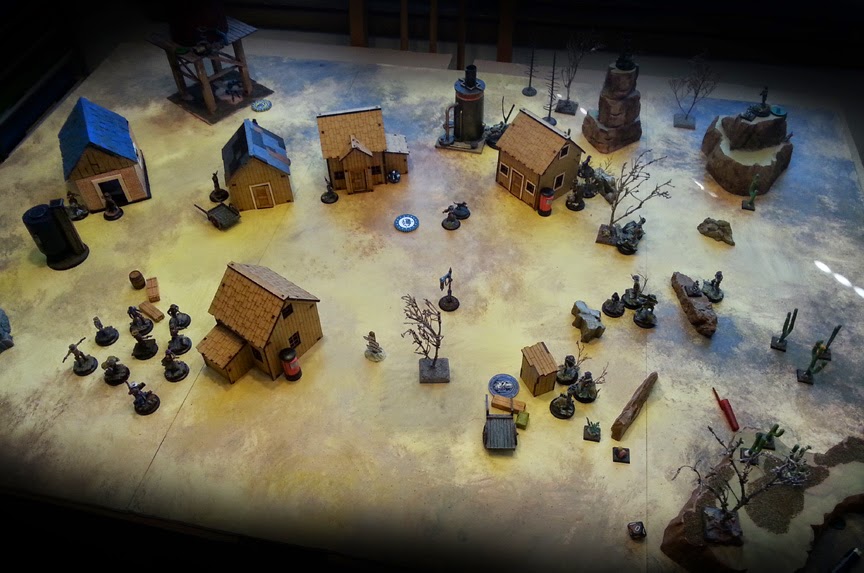 As always, you move the civilians first.  You never quite know what they are going to do. 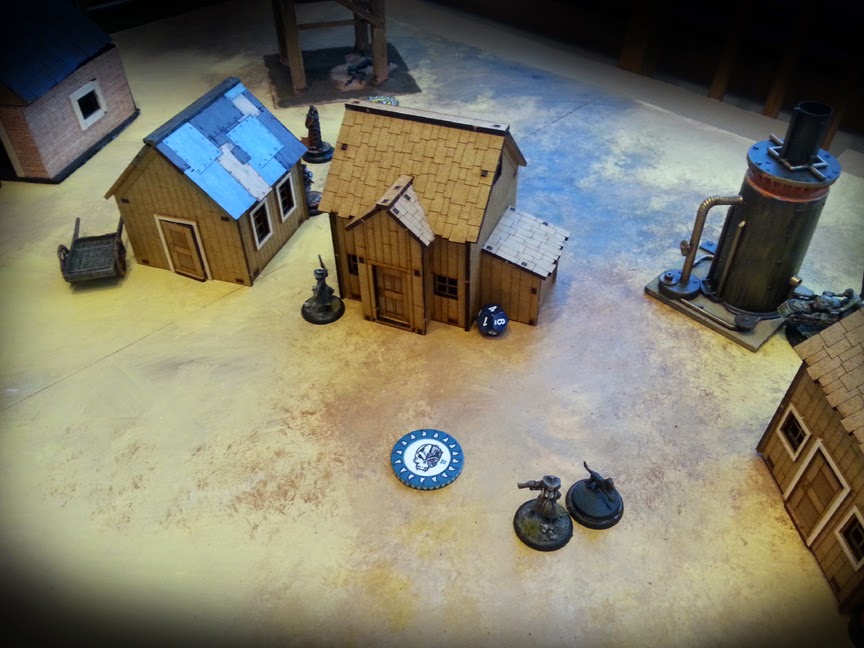 The Outlaws move in strength to the objective in this building.  It would have quite a target on it... as blast weapons searched for something to hit. 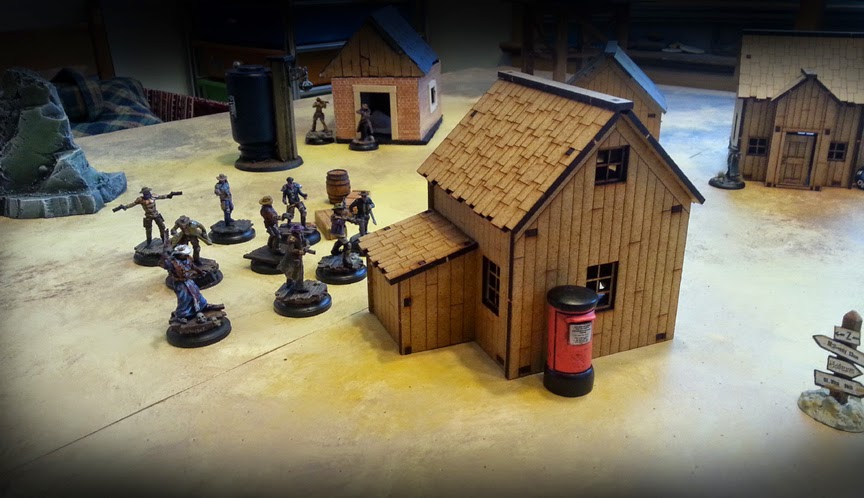 Doc Holliday claimed an objective for himself.  Must have been a heck of a poker game going on in that building! 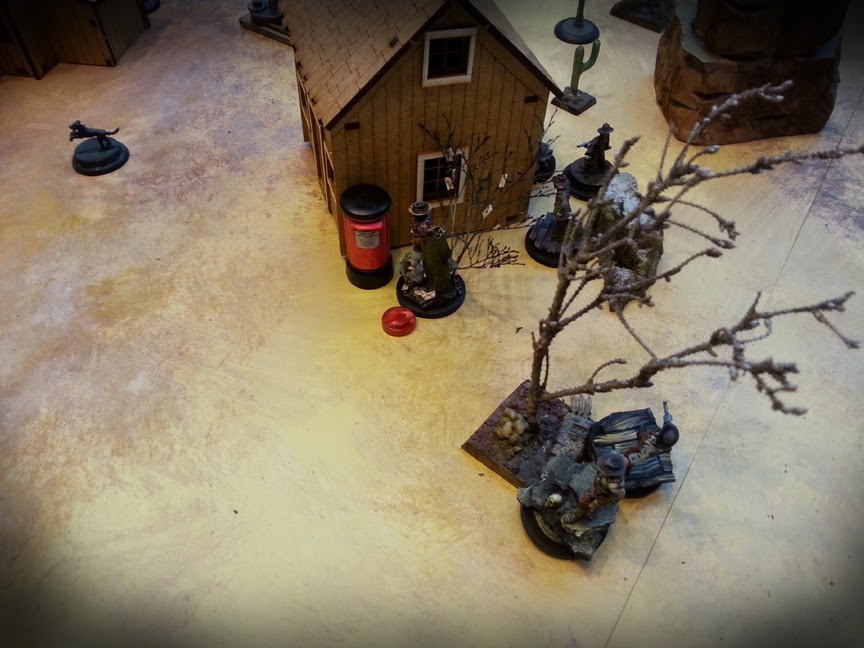 Speaking of blast weapons, Doc launched a template at the Outlaw mob, killing one and forcing another to head for the hills! 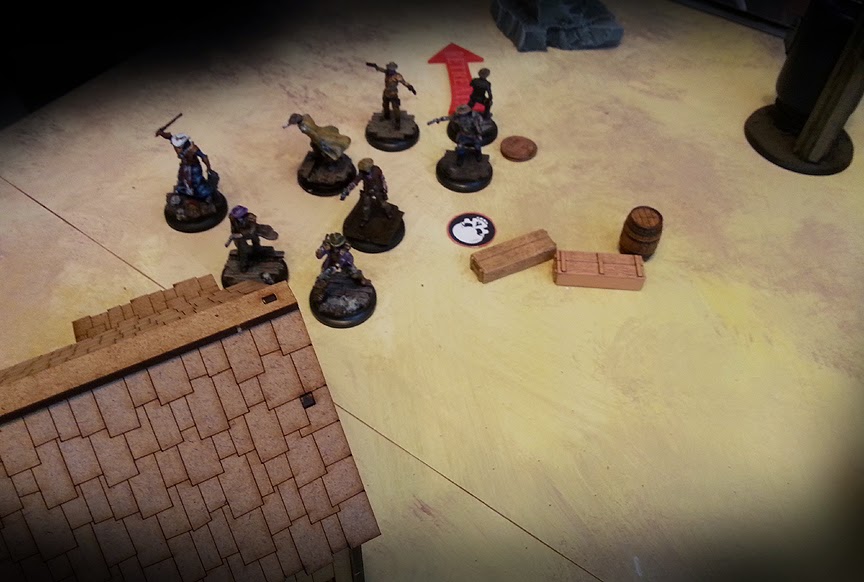 Deputy Berenger would continue to blast this building until it came crashing down... nothing more than a pile of timber.  This would make things more difficult for the advancing Outlaws. 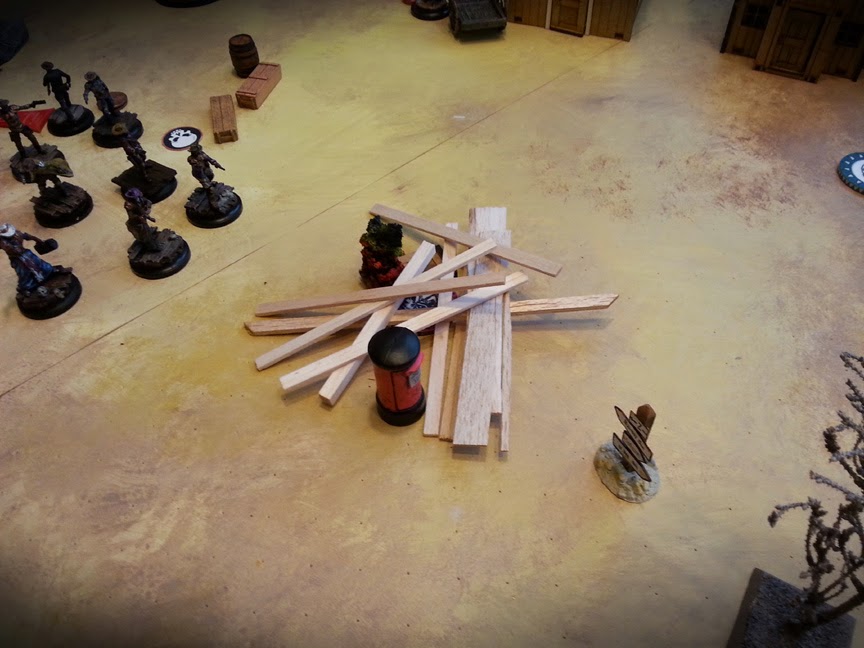 Pat Garrett was victorious in a sniper duel, picking off the Outlaw on the water tower.  The Interceptor moved quickly, and downed a few more unwary Outlaws trying to sneak up on Doc.

The building was also set aflame! 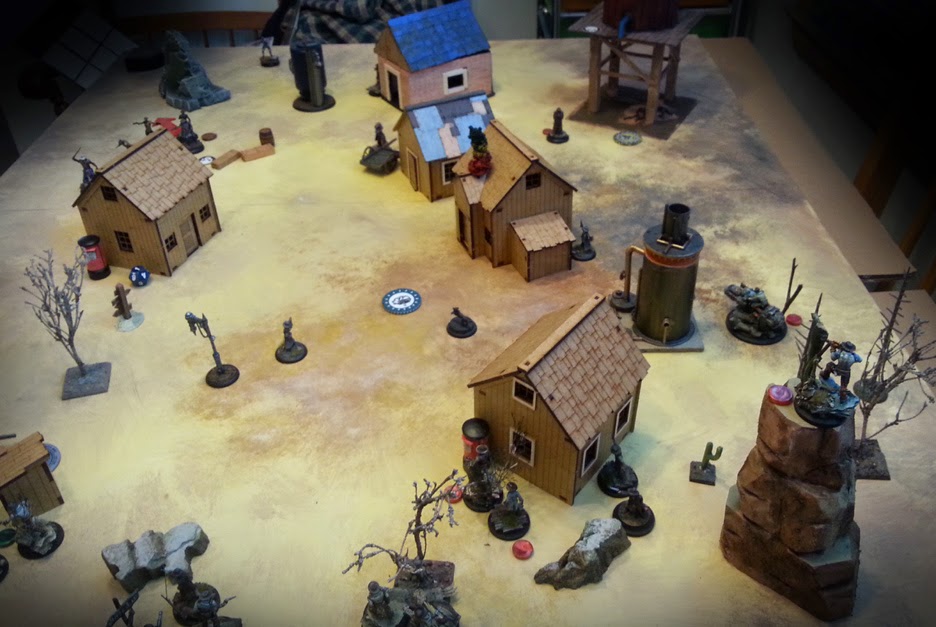 Deputy Berenger and his Close Combat Hired hands took up a strong position facing the large Outlaw group.  They knew that the outhouse must be defended at all costs! 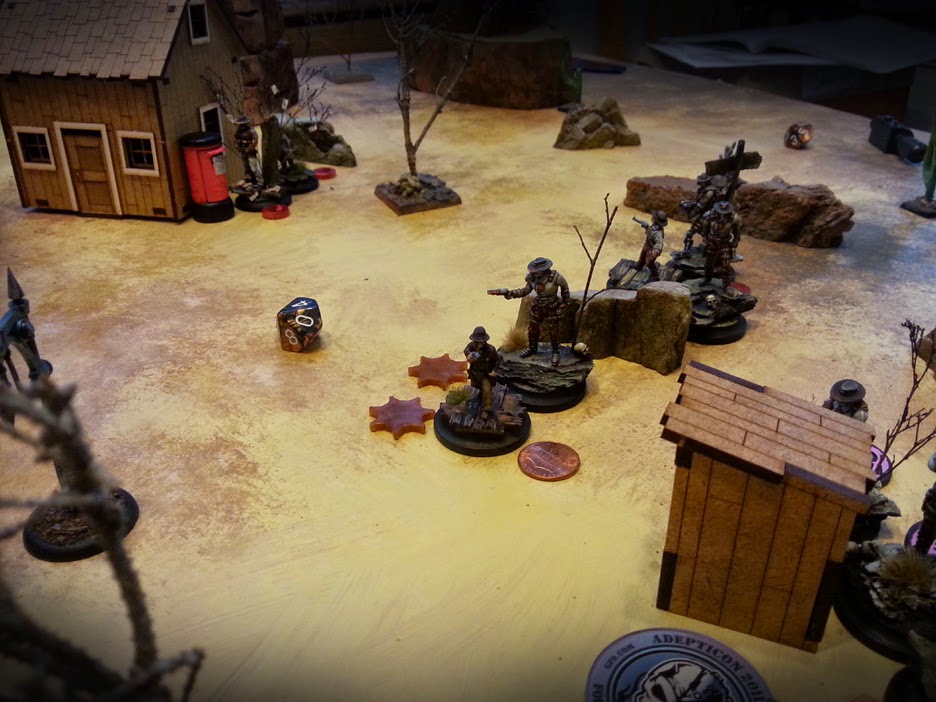 The Preacher's wife and Fido continued to roam through the center of town, seemingly oblivious to the carnage all around them! 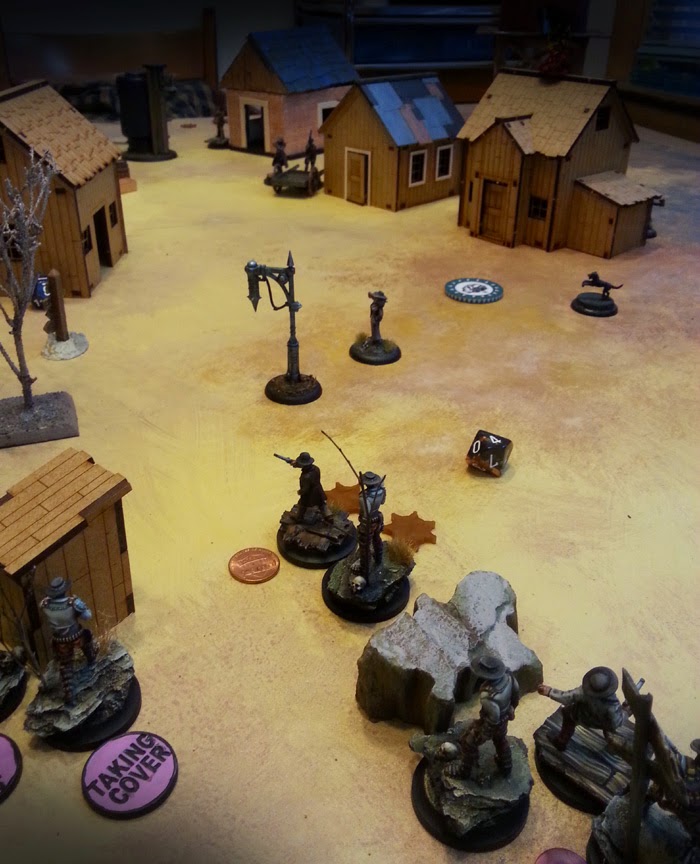 Under all that lumber was an objective, forcing the Outlaws to keep some of their posse nearby.  This would make them vulnerable to those blasts!

Their proximity to the table edge would also be very unfortunate when those inevitable courage tests came along. 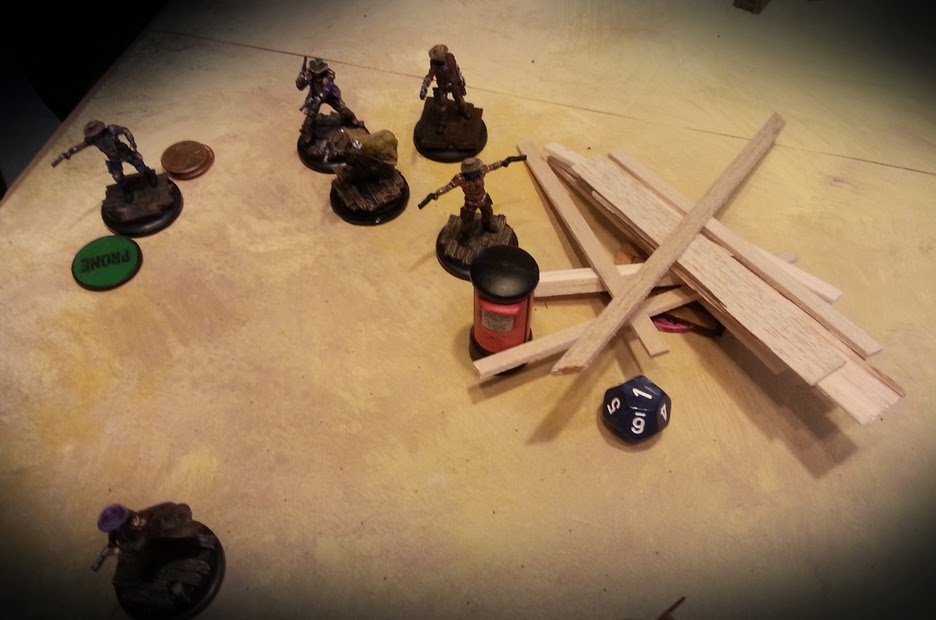 Deputy Berenger flattened a number of Outlaws, including the Bad Doctor Long Tree!  He decided he had enough, and left the field along with another Hired Hand. 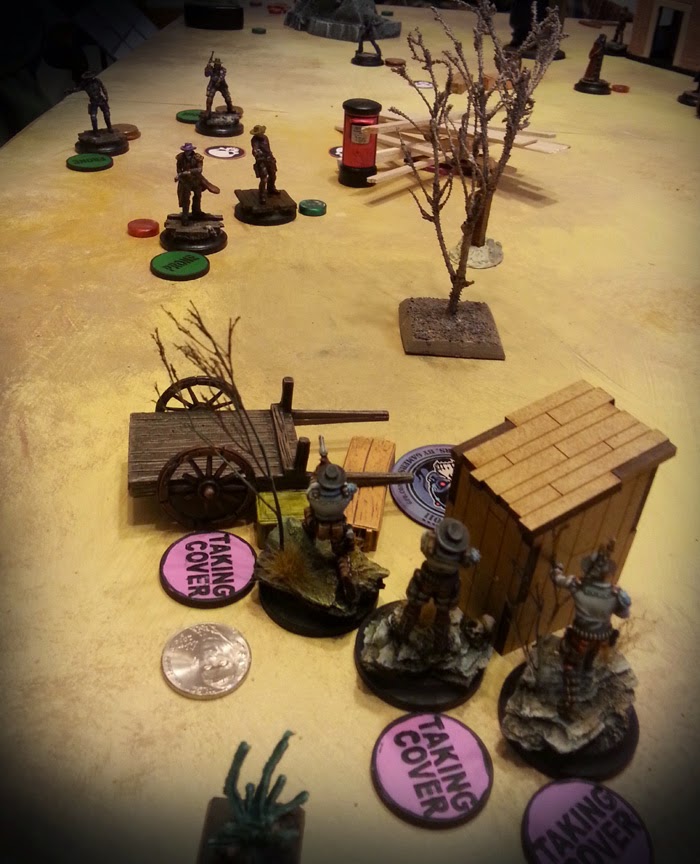 The body count rises as the Lawmen Hired Hands charge the surviving Outlaws. 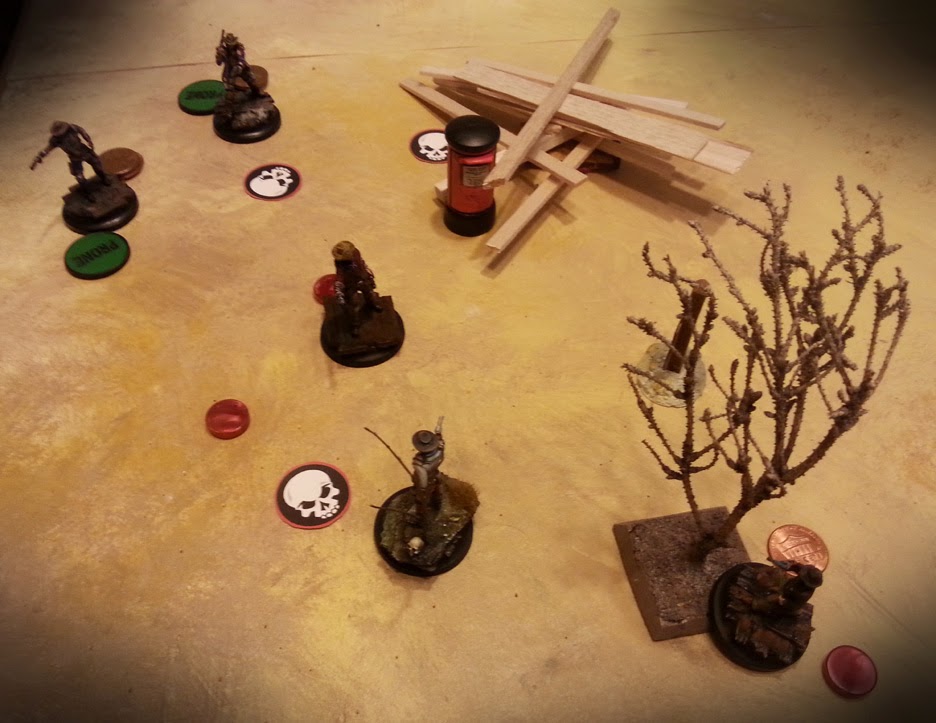 Billie the Kid would attempt to single handedly change the tide of battle in this area, using his Cold Blooded Killer skill to tear through the sacrificial Lawmen Hired Hands. 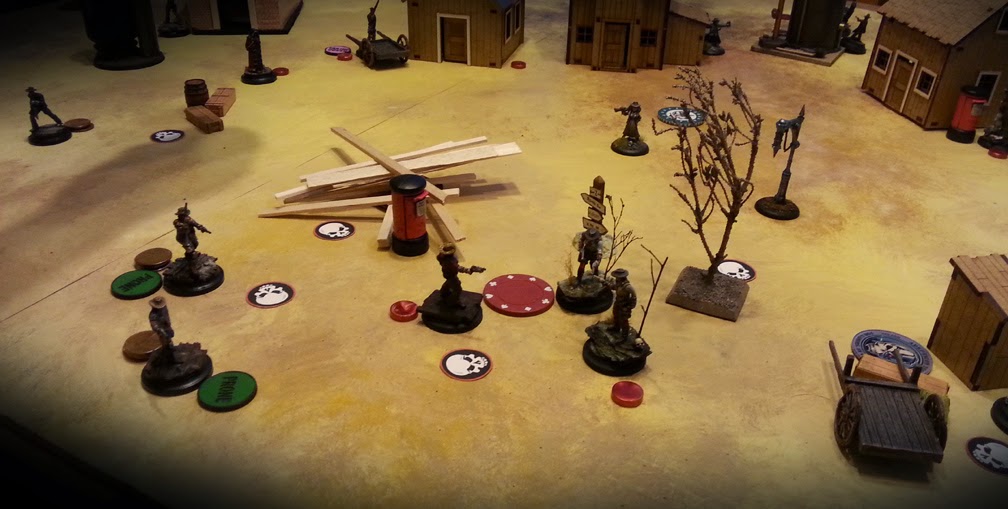 Meanwhile, the Interceptor and the Lawmen Hired Hands took out more Outlaws, setting up an open run at the water tower! 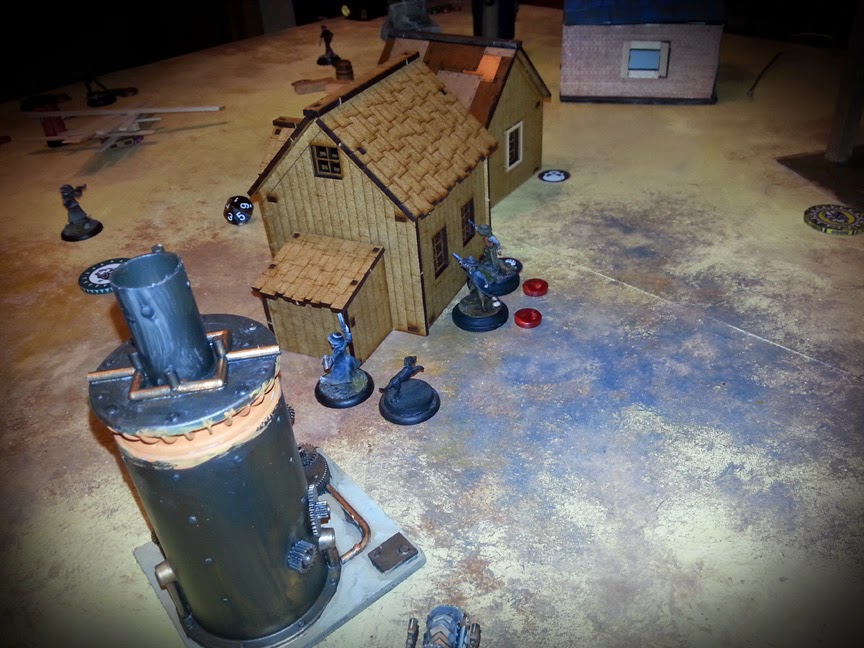 You can see the pile of bodies starting to rack up on the left and right sides of the board.

A few brave Lawmen held up Billie just long enough for the four barrel shotgun to arrive.  He would incinerate Billie with hot lead, leaving him severely wounded. 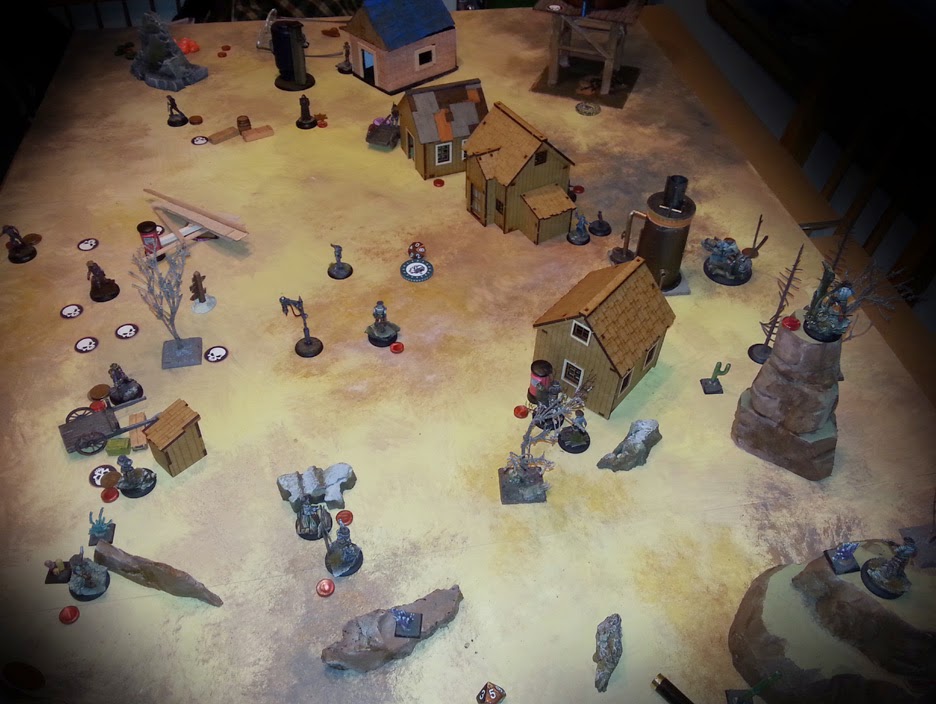 Miraculously, the Lawmen rolled a third consecutive ten for initiative, thus ensuring the firey death of Billie.  His ashes were then tossed down the hatch in the outhouse.

The rest of his posse was too dismayed at his fate to continue, so they high tailed it out of town! 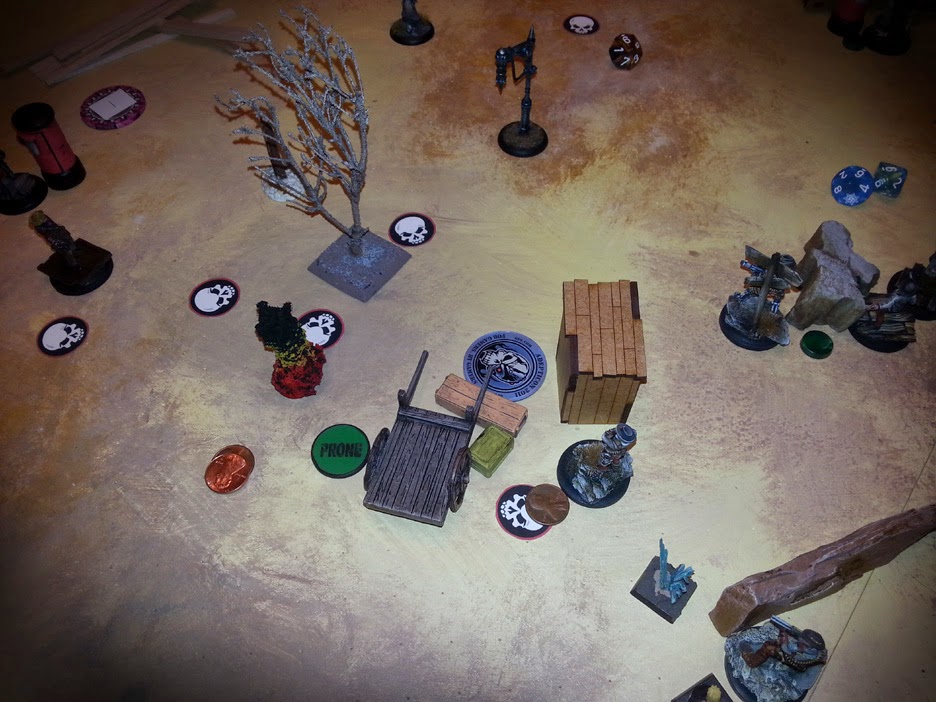 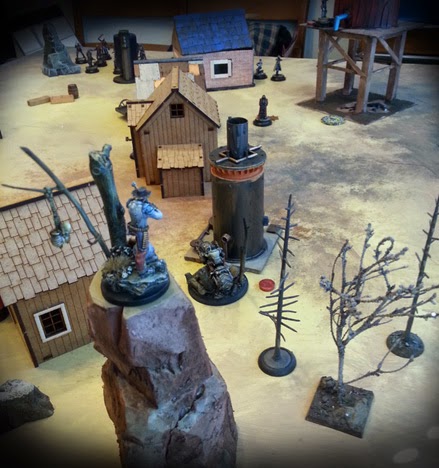 Well, it looks like Wild West Exodus minis are for more than just painting!  Heck... you can play games with them!  Wow, who would have thought...

This particular scrum was going to take place on some new terrain.  Brand new laser cut buildings from WWX, and a fold up board to extend the corners of the table, and make a more appropriate color.

Meemo was very excited about this, and grabbed a brush to help. 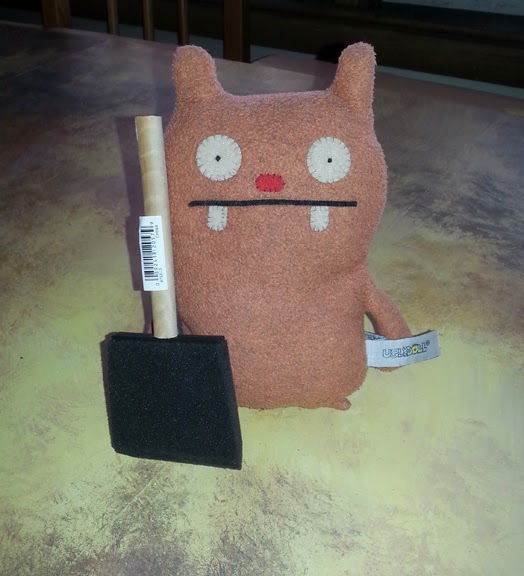 Rich was also very excited about his new Field Medic named Long Tree.  While he can potentially heal wounds, he might also give you a prostate exam when you really need a tourniquet instead.

He also has the potential to boost his lifeblood total past its starting value.  Exciting indeed! 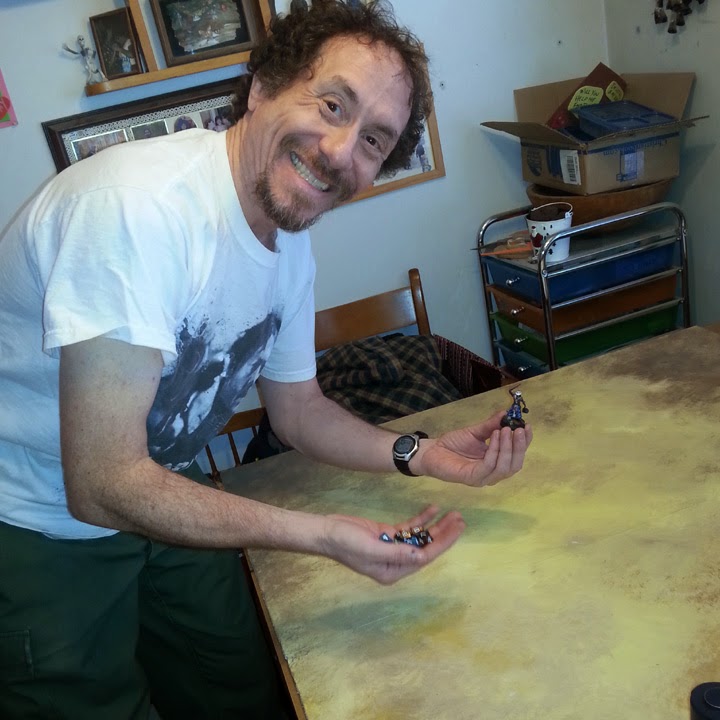 You can see how the new board looks with all the new terrain!  The buildings and mesas matched even more closely than I thought they would.

The board is nothing more than 3 sheets of 1/4 inch pink foam cut to size.  They are hinged, so it folds up nice and small.

Another side benefit to this foam board meant that the dice would not bounce around as much as they had been.  That's important, since you need to use directional dice quite often. 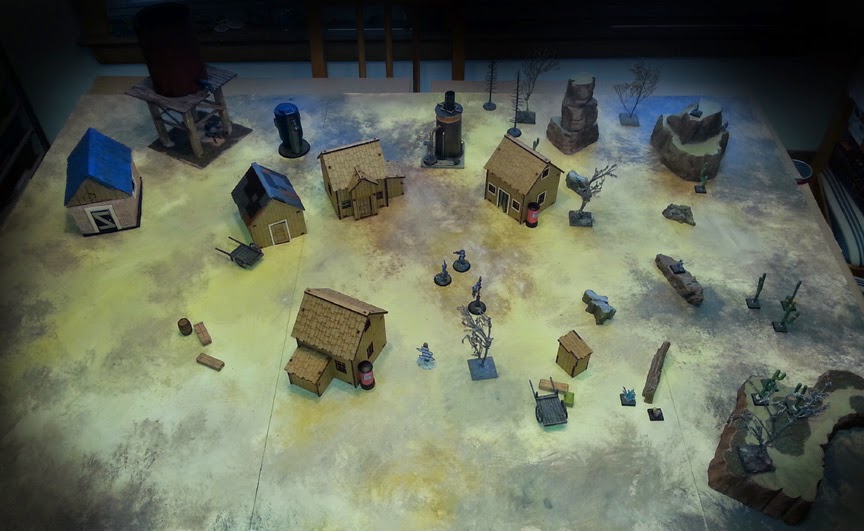 I decided to experiment with ten Close Combat Hired Hands.  This boosted my overall number of figures to 16, which was double what I had in the previous tussle.  Having ten on one type of Hired Hand meant that I was able to add a free light support in the form of a four barrel shotgun!

Leading the posse would be my brand new Pat Garrett Boss. 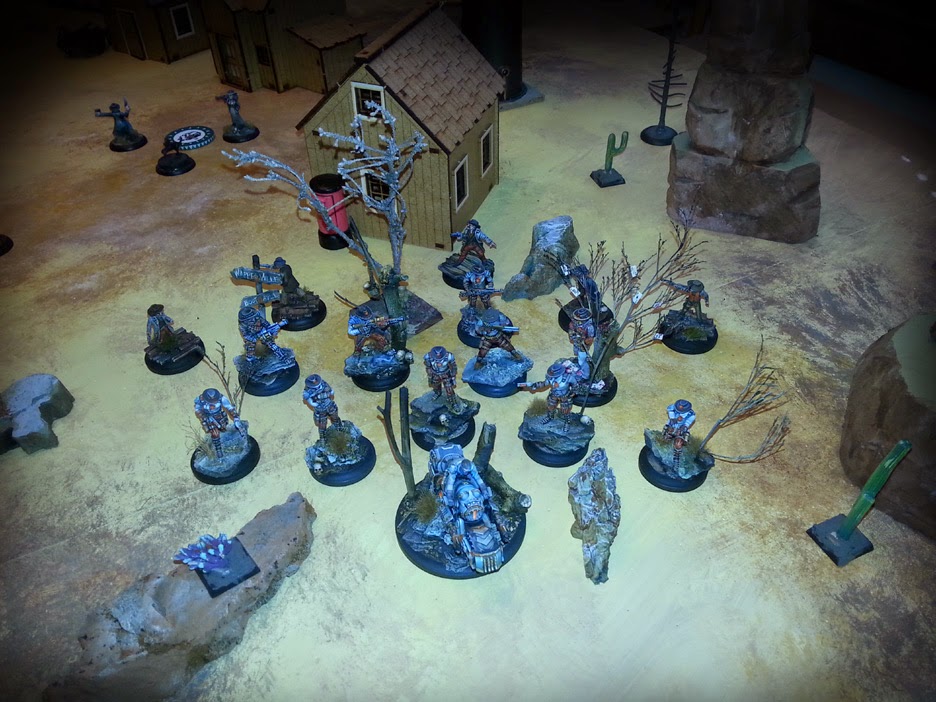 I wanted to take advantage of three things this time around.  Forward Eschelon, Gang actions, and Deputy Berenger's Blast shield ability.  This would prevent huge numbers of troops from getting knocked prone by blast weapons.  I tried to keep them within 6 inches on either side. 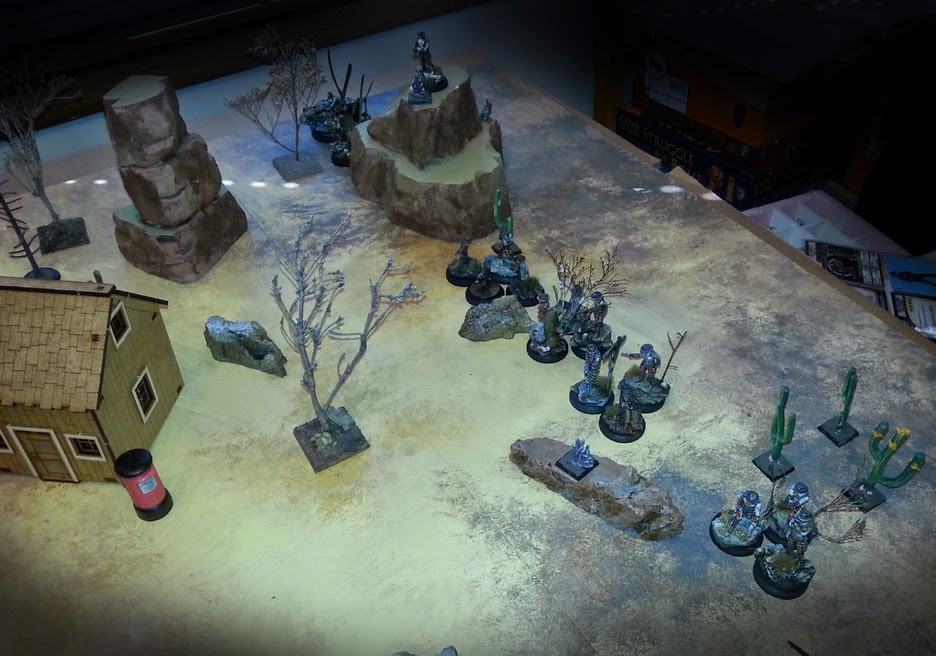 Here's the Outlaws, with a few new character combos of their own. 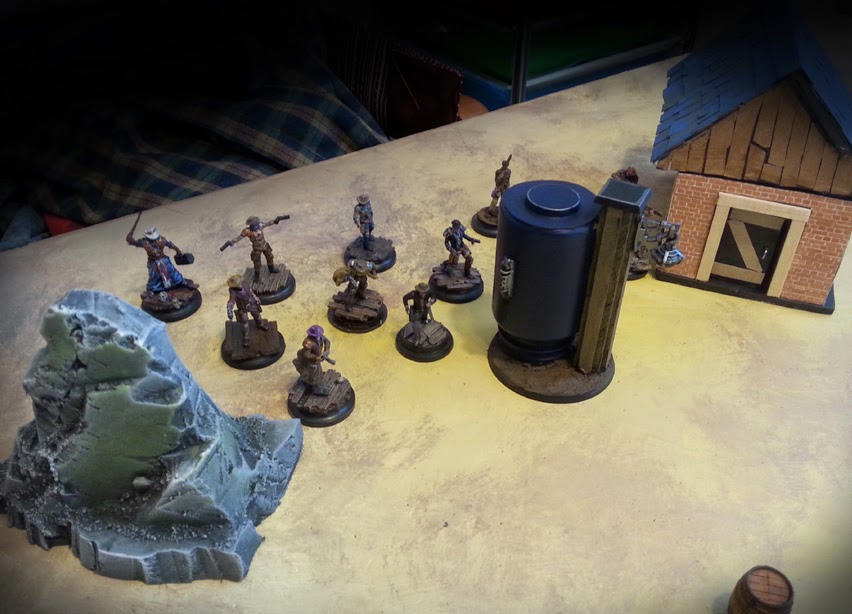 Lined up for the Advance!!! 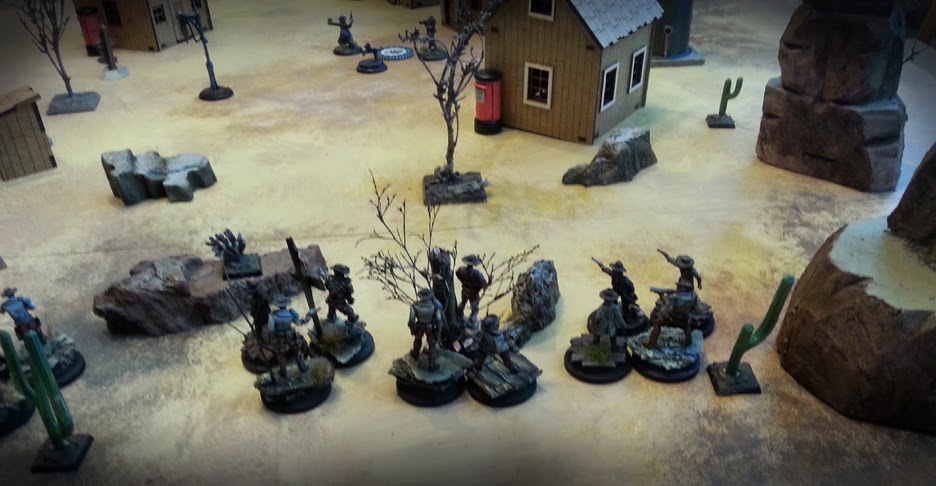 This would be our first objective based game, with a limit of 8 turns.

There were 5 objectives, with a variety of point values.  One was worth three, two at 2 points each, and a pair of 1's.  This meant you would have to go for/deny as many as possible, just in case your opponent managed to find the valuable ones!  They would not be revealed until the end of the fight. 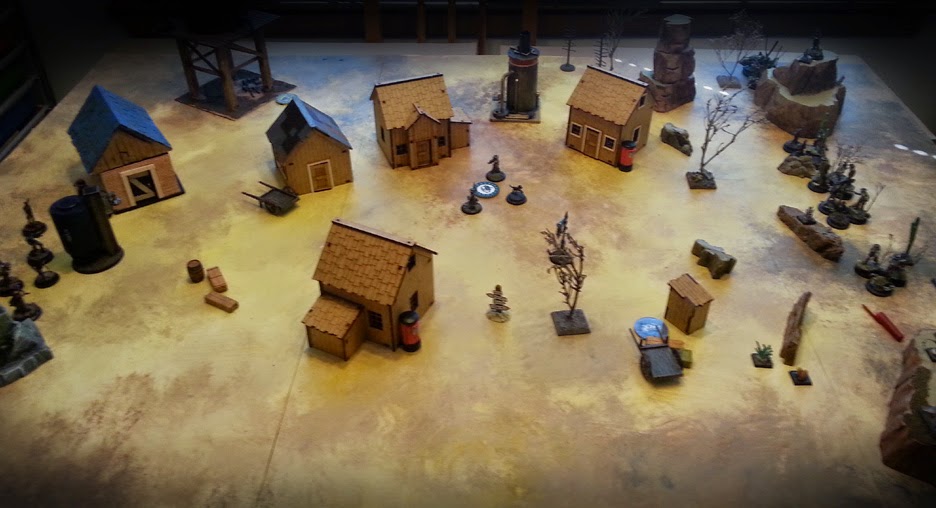 As always, the Preacher, his Wife, and Fido started running around the center of town as the carnage loomed! 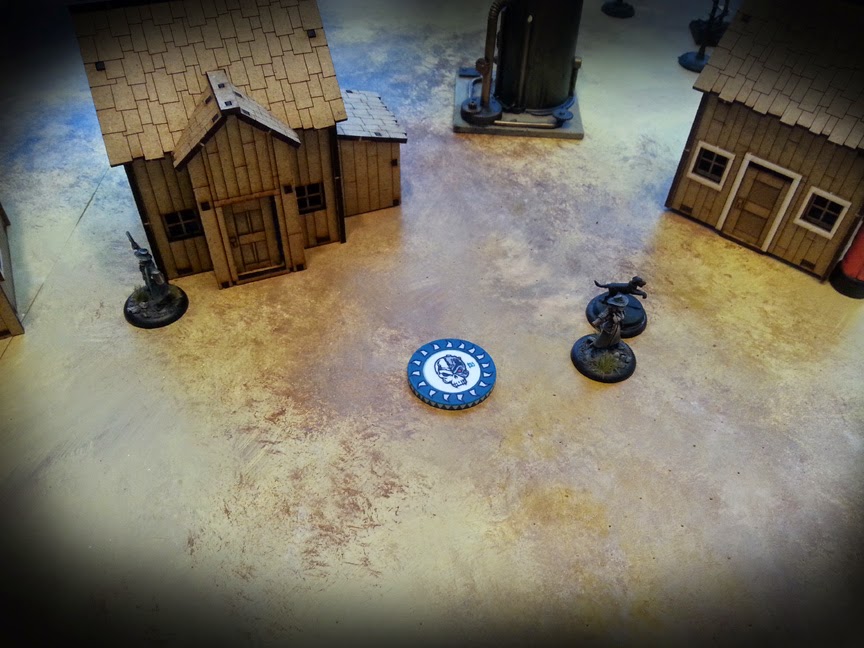 One of the Hired Hand Outlaw snipers scaled the water tower, on the lookout for Lawmen advancing towards that objective. 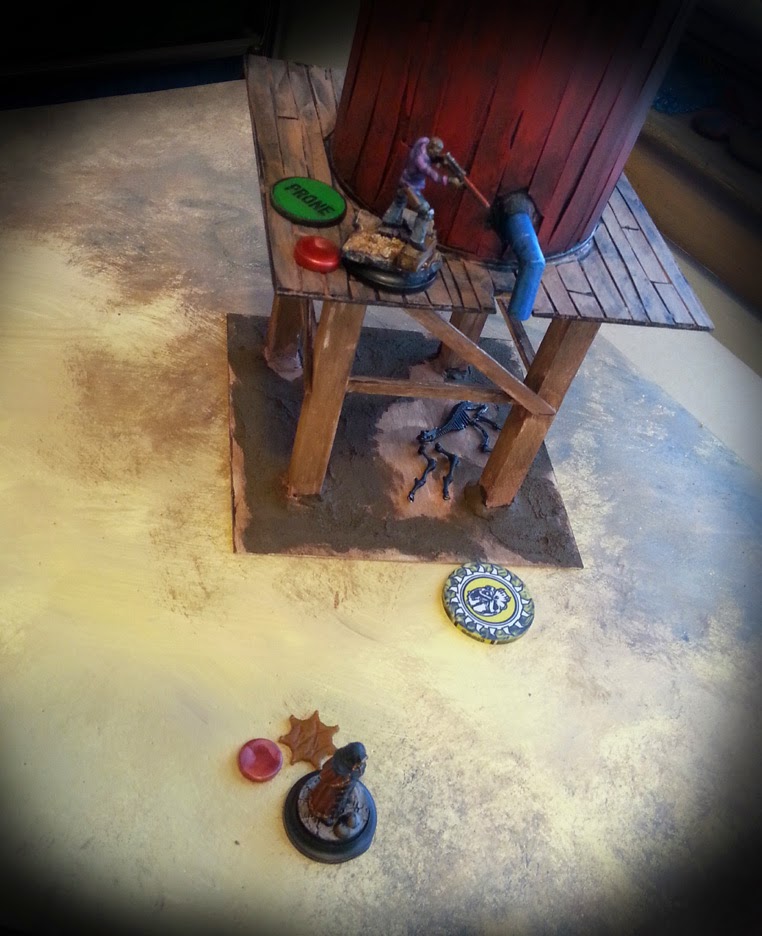 Pat Garrett climbed the tall mesa (with some effort), scanning the streets below.

The stage is set, the pieces are in place.  All that remains is to see how many new residents there will be on Boot Hill!! 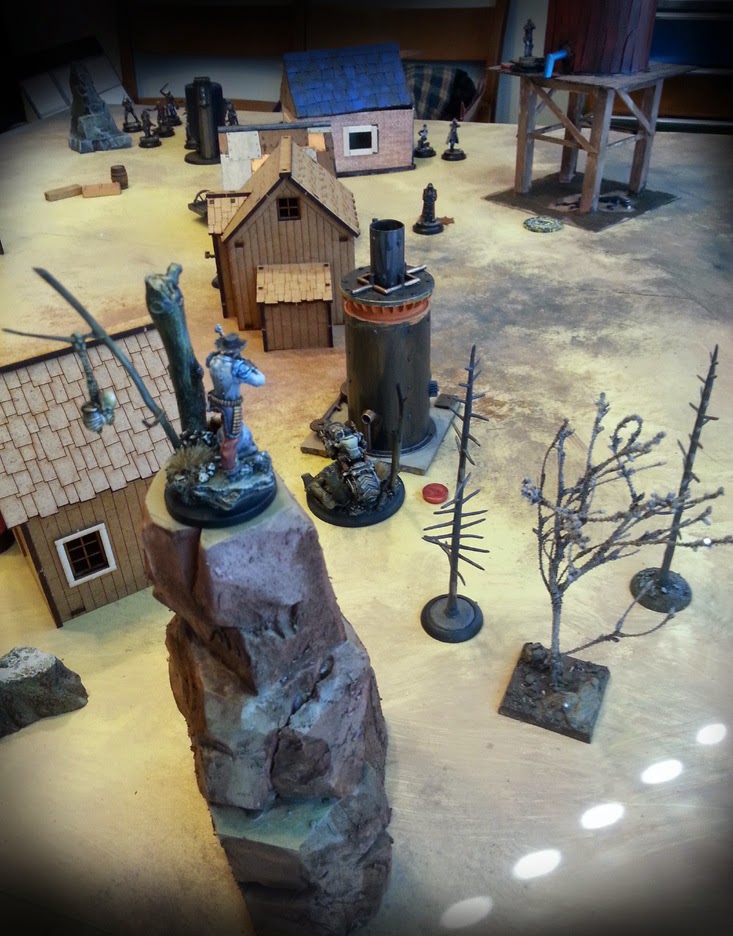