Another History lesson... and the Monument Run 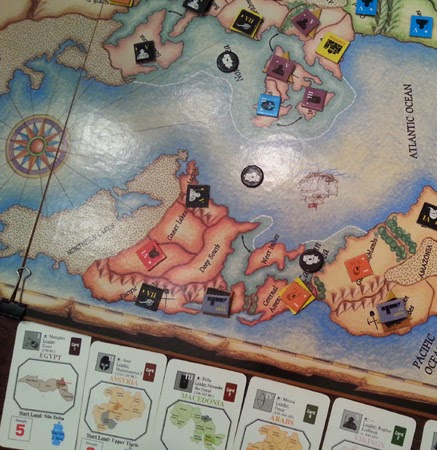 After the last game of History of the World, where victory was achieved by me (while Cathy was out of town), there was a desire to rematch this particular game.

Cathy would be playing this time around.  The standard saying is that "Team Wappel" always wins.  It's usually more like "a" Wappel wins.  Not usually due to helpful actions of the other :-)

Right off the bat, Cathy's blue guys start beating up on the forces of black... or moi. 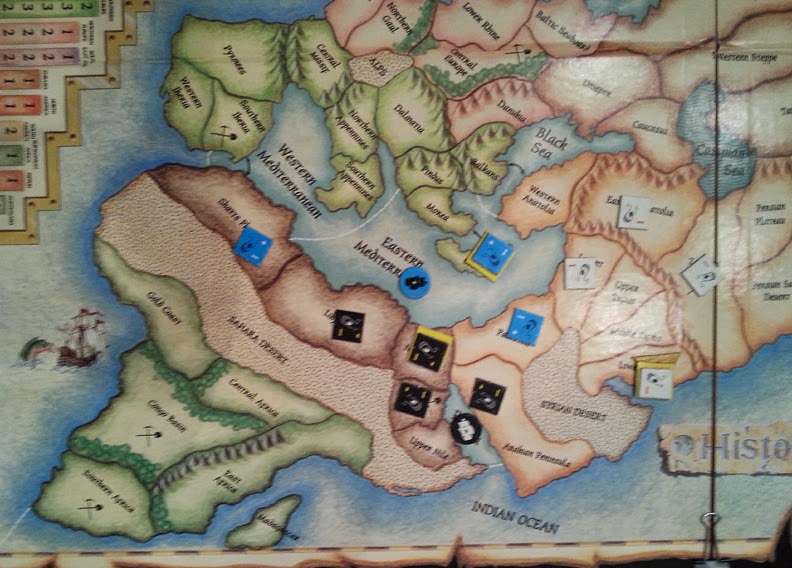 Tina (red) had a nasty event card that allowed her to take more territories with free armies.  Those event cards can be very nasty, or horribly inconsequential. You only get so many of them, and some are also "epoc specific".  So, you must use them wisely.

They can be particularly effective in this instance, where you don't have many armies to begin. 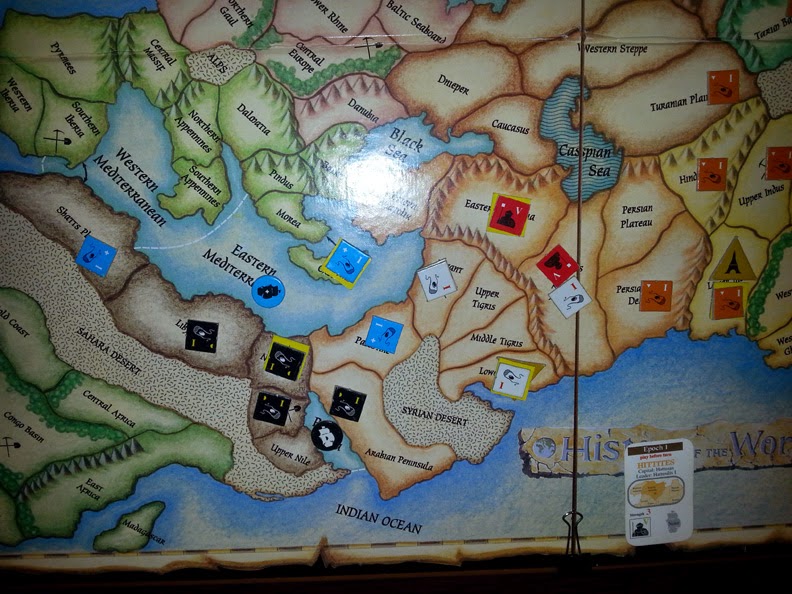 Hank (in orange) would end up being master of India for quite a while.

That is unusual, since normally what you build on a given turn is wiped out in the next.  You never know which Civilization you might get from turn to turn.  It might be the Romans... it might be the Guptas.  Or the Cholas.

Some civs are far superior to others, but the order in which they are played can, at times, be more important. 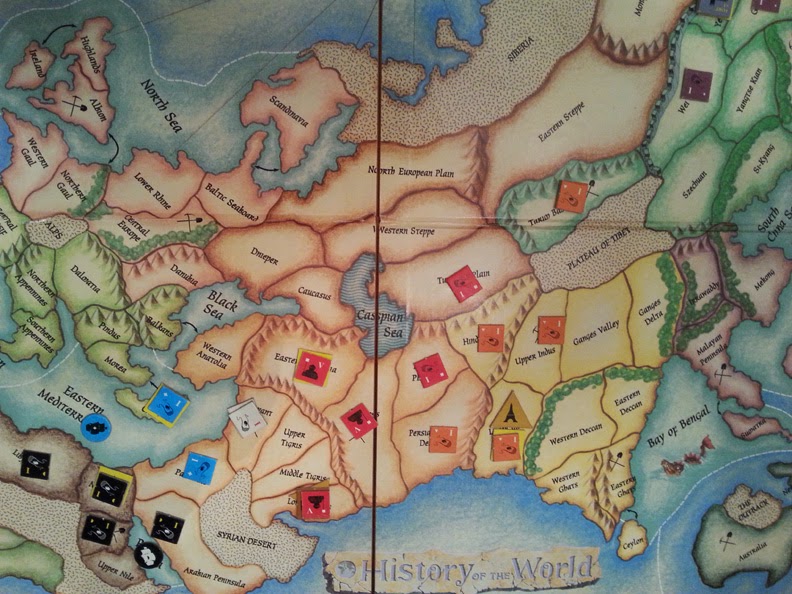 For instance, the ideal positioning is to be the last to play your civ... and then first to play on the next turn.  If you play first and last, that is horrible, since almost everything gets wiped out by the time you play again.  This can cut your score on a given turn 30-60%.  Ouch! 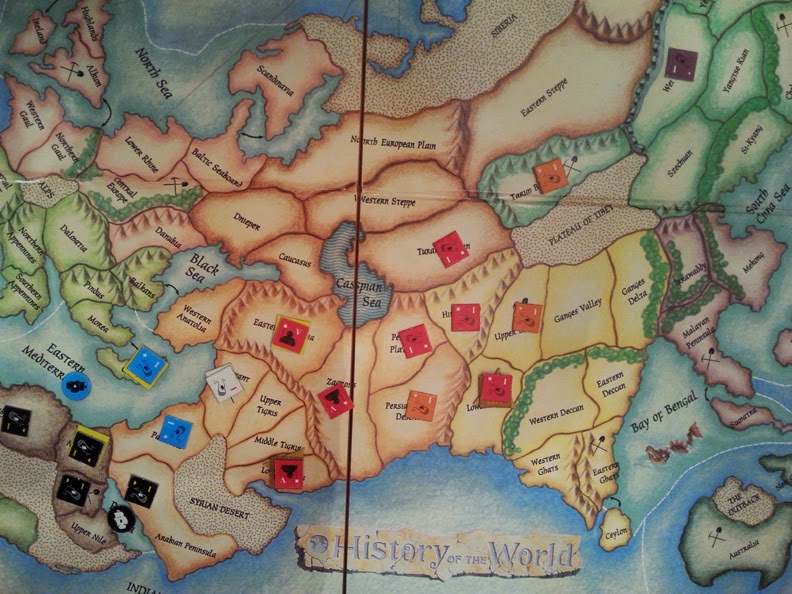 Here the civs are more spread out.  It's not unusual (especially with less than 6 players), that civs arise right on top of each other.

As this follows the history of the world, civs arise in the Tigris valley first, and move out from there.  The chart on the left side of the board shows how the value of various areas change over time.

There are seven epocs.  By the final epoc, civs are trying to fight over the New World. 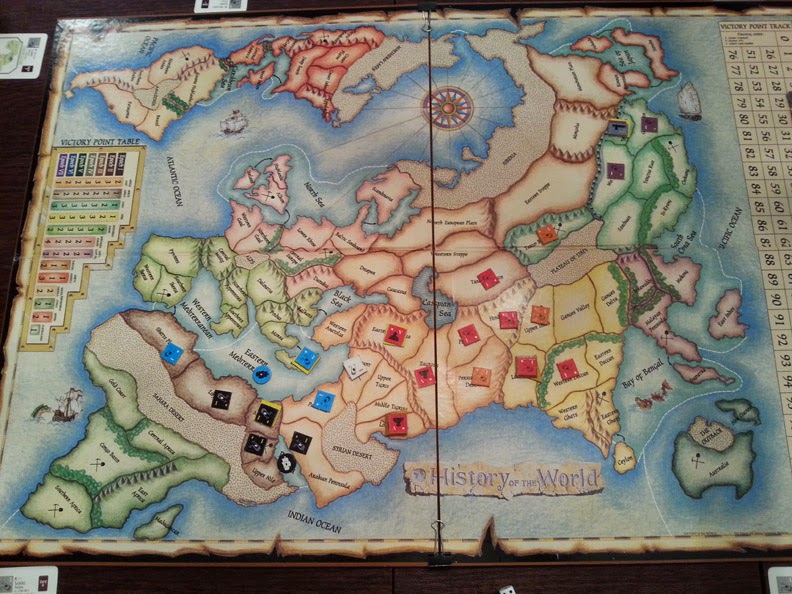 Three 1's.  Gee, who rolled those?  It couldn't possibly be me.  Yes, it was.  Particularly painful, because those ones destroyed territories via another event card.

By the way, I called those 3 ones in advance.  Then I rolled more. 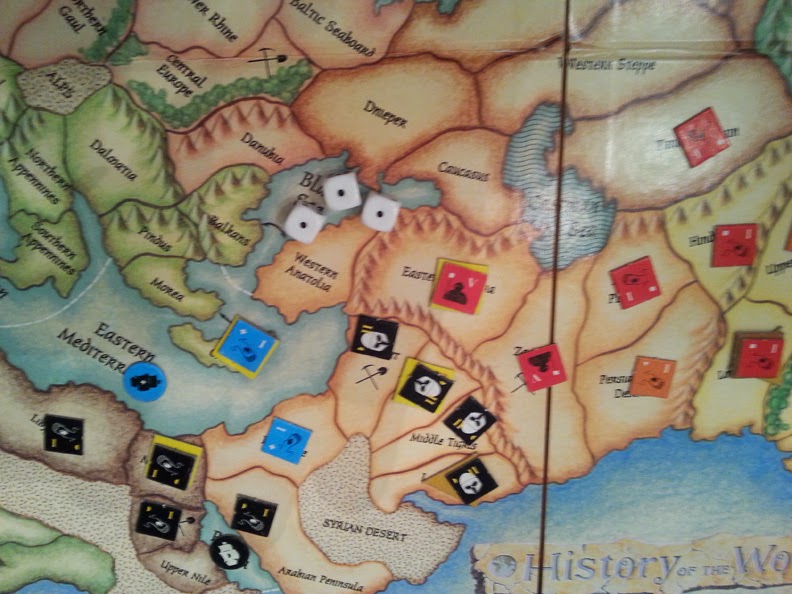 Hank and Tina struggled over India for a good chunk of the game.  This was another event card result.  One of the things you are fighting over are those spaces with the axe and shovel.  Those resource centers allow you to build monuments, which boost your score.

To win, you don't necessarily have to have the most territories.  The value of those territories is more important.  This means you can do a lot with very little.

However, this puts a big target on those resource centers, as well as monuments and cities.

India would be the site of an unusual amount of monuments in a very small area.  Lots of bloodshed over those! 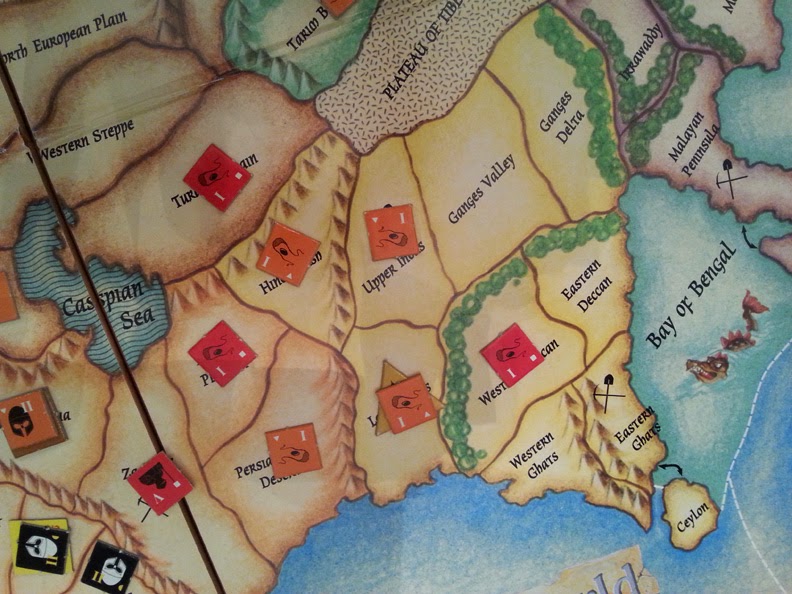 In this view, you see that civs are emerging in Europe, as well as those monuments and cities I mentioned.  The target grows! 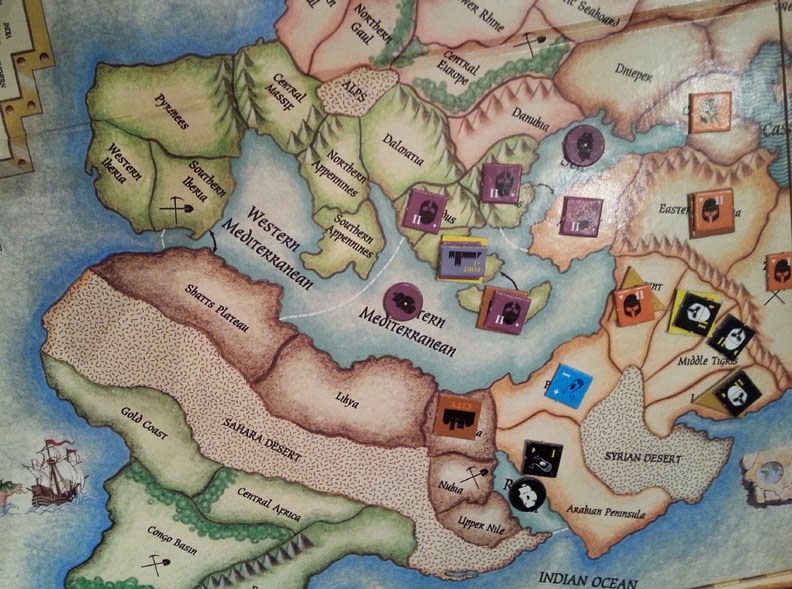 Cathy uses a Palestine revolt card to blast my Euphrates empire.  This would happen quite often. 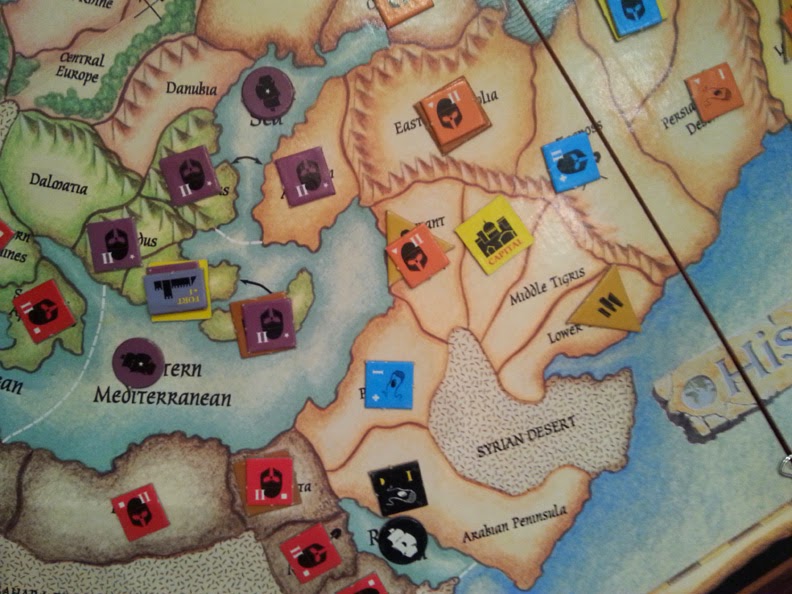 Not a lot of black pieces on the board.  Yes, that equates to a low score.  I can only hope that I end up with either a major civ such as the Romans, or a number of mid-size civs such as the Byzantines.  These middle of the road civs are handy, since they don't put as big of a target on your back, and they have just enough punch to do some damage. 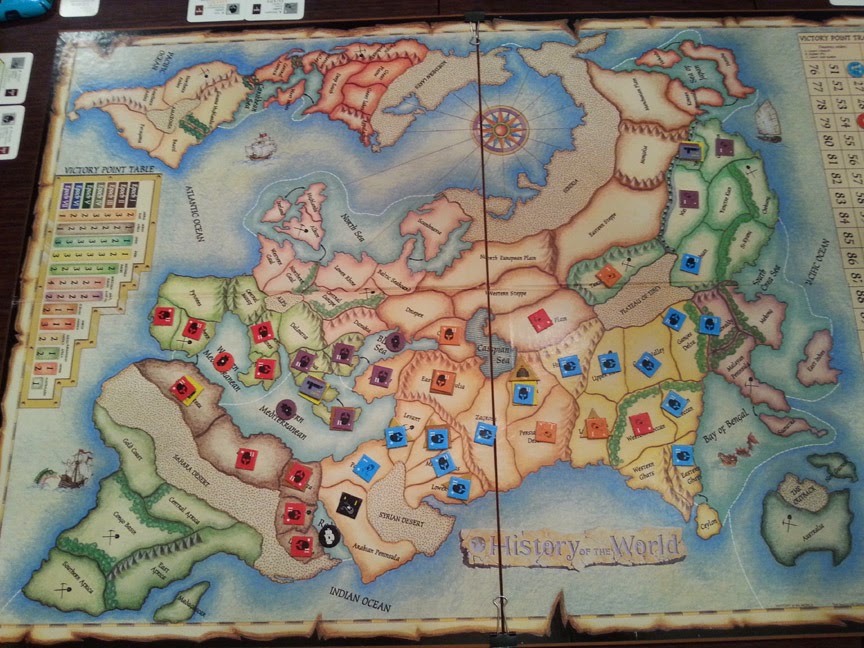 I believe this was the first of those Monument Runs.  Notice how I have taken over that string of monuments in the Middle East (the triangle pieces).  I attempted to use a special event card that would make it easier for me to do even more damage with this middle of the road civ.

Unfortunately, the card only works if you don't roll like me.  I should have gotten 2-3 more territories with it.  This would prove costly later on. 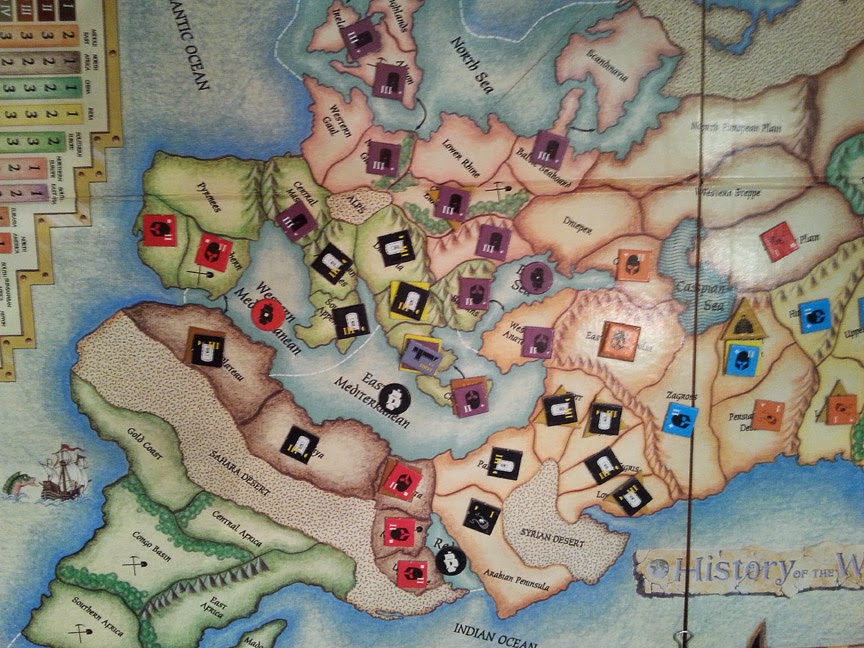 Did I mention the Romans?  And how one Wappel usually wins?  That would be Cathy marching through Europe with the Romans, one of the most powerful civs in the game.

Not only does she do tremendous damage with them in Europe, but she also has holdings in India.  This resulted in a huge score.  Also a big target.

Remember, you rarely, if ever get to choose your own civ on a given turn.  If you are way out front, you will be dealt a very weak civ.  It's the biggest balancing mechanic in the game. 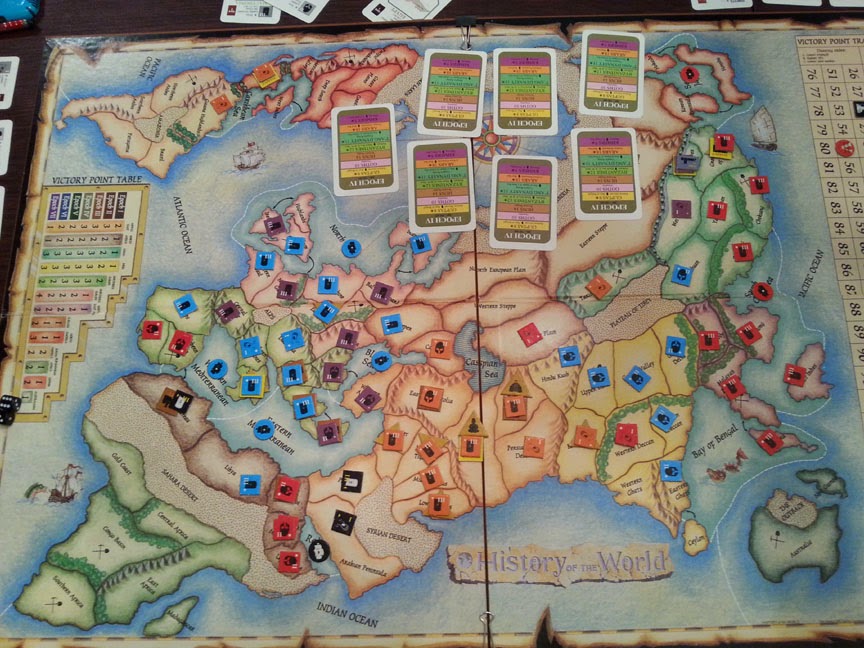 You can see the civ cards out on the board.  These show you the relative strength of each one, where they arise, and the order in which they are played.  Never forget how important that order of play is!  It's how I won the last game.

I went first on the final turn, and that made all the difference as I cam from behind to win. 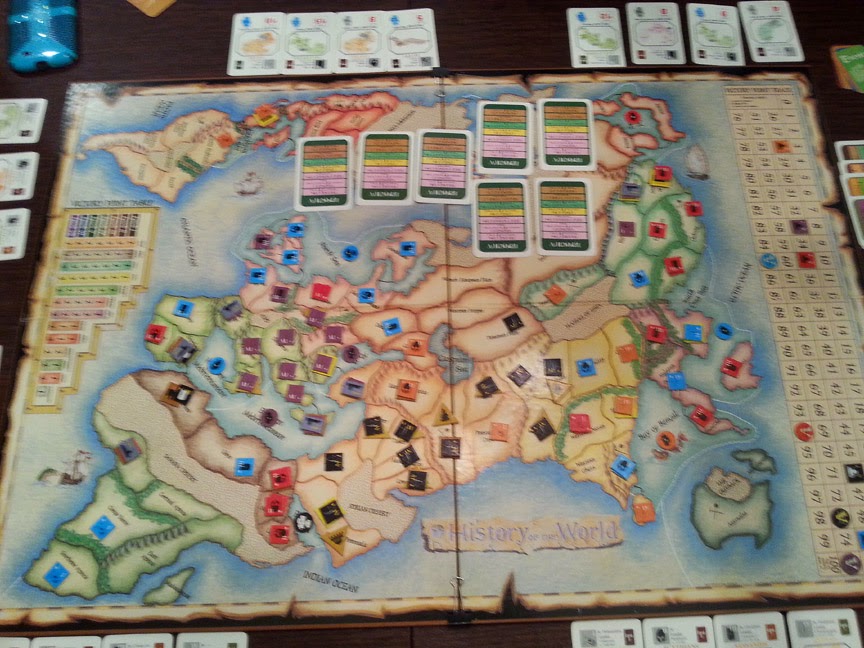 Dave did a lot of damage in Europe this turn (purple), and would even take a lead in the game.  I had the Vikings, which was not a lot of points, but did allow me to establish things in the New World. 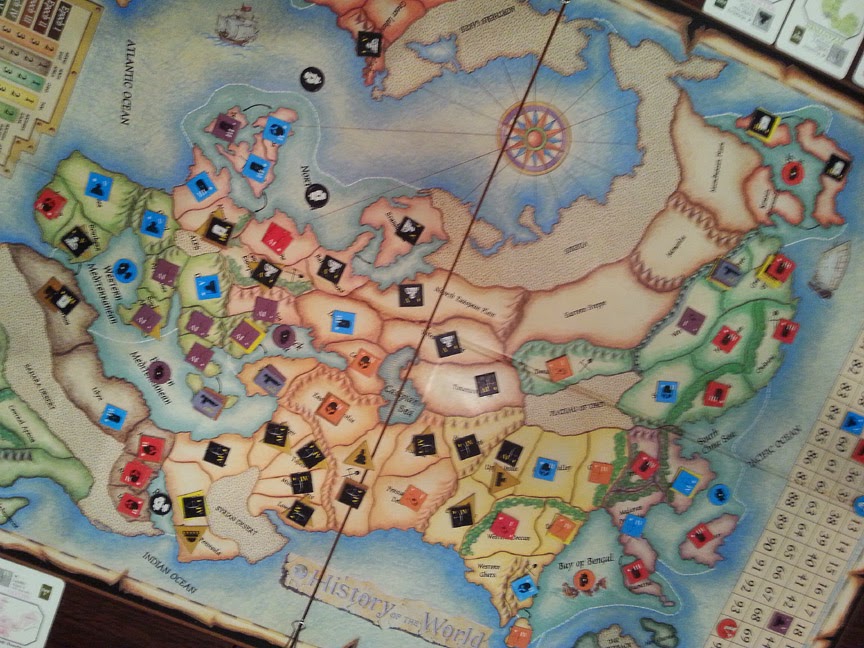 Five epocs played out of seven, with Tina way out in front.  She was able to establish a large empire in China, and hang onto it for a while.  Again, with fewer players, there are some civs that never arise.

As an example, the last two games saw no Mongol empire!  Had they shown up, Tina and I would have been wiped out.  However, they need to "Get over the wall", so to speak.  Just ask Jeff how that went for him. :-) 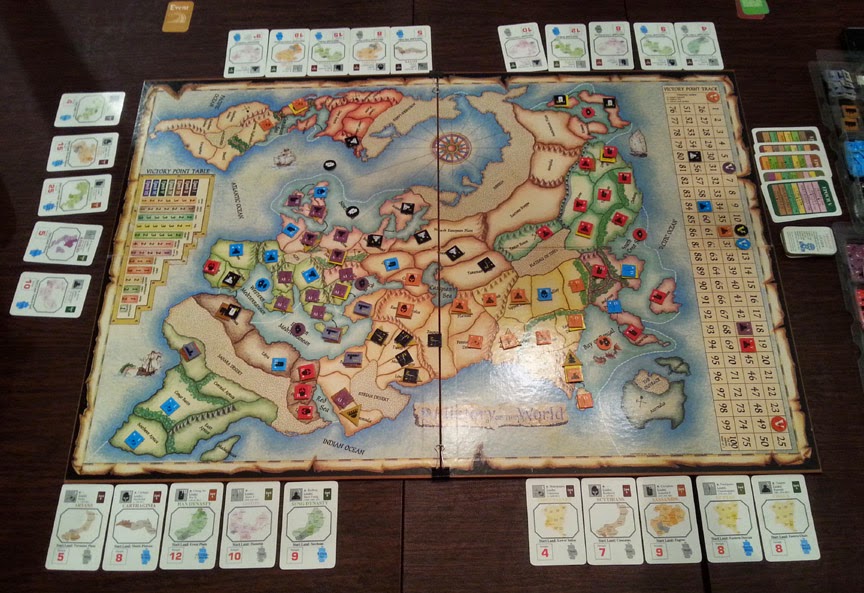 Epoc six is played, and my only hope rests with the New World.  I wanted to get out there early, since it's even harder to fight out there. 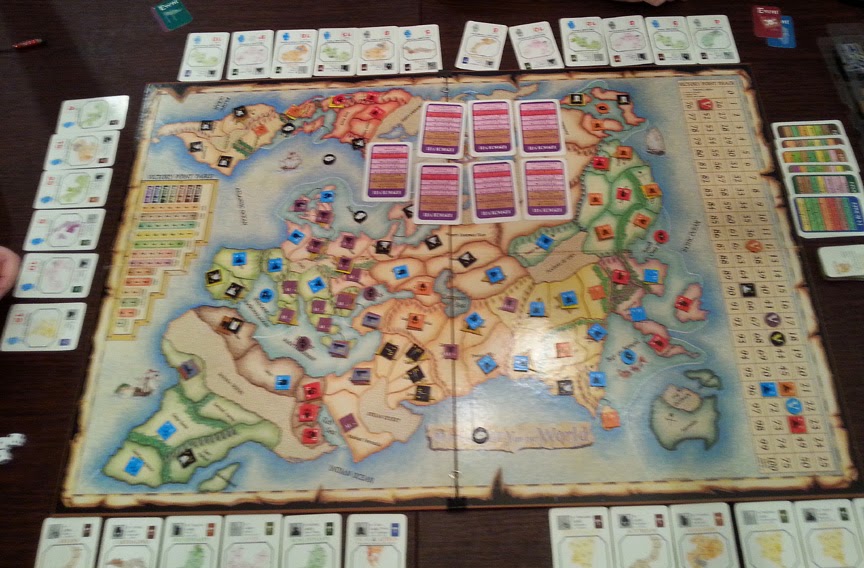 You can see that my Spaniards are rulers of the New World!  Sadly, it just wasn't enough, as I fell short of the victory by 5 points.

Who was the ultimate victor?  That would be Cathy, of course! 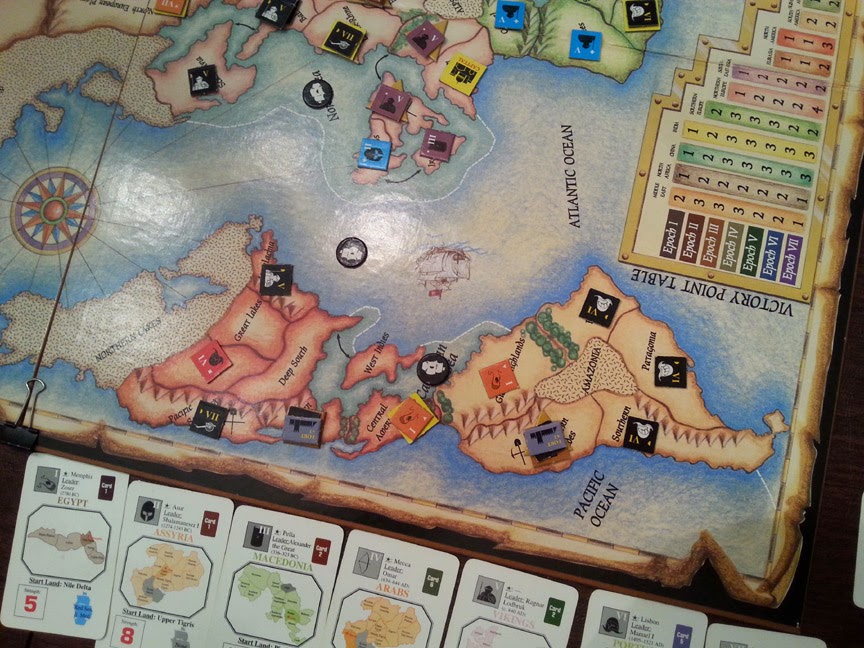 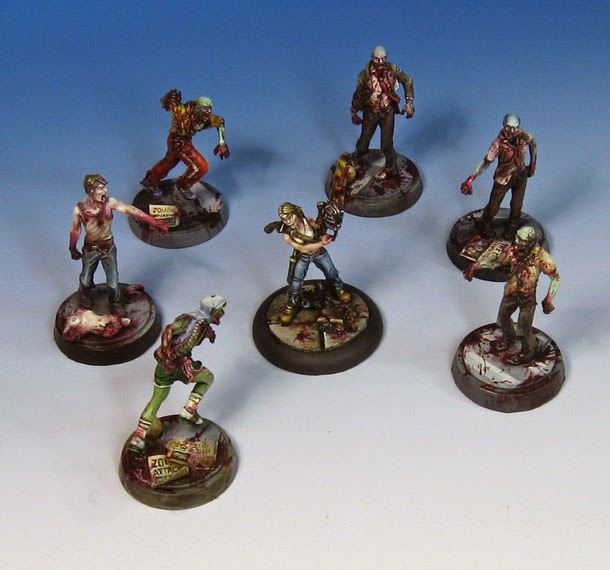 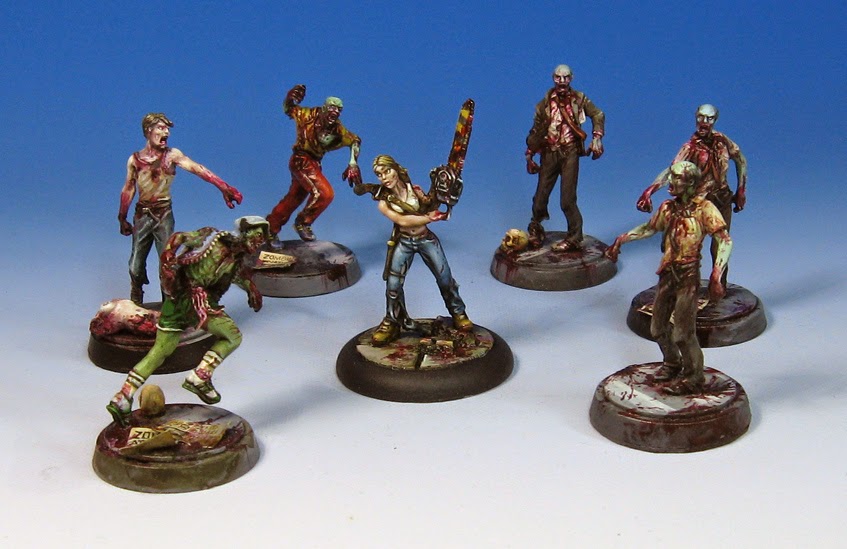 Lots of mindless creatures looking to snack on your brains... no problem.  She'll take care of that for you in a jiffy. 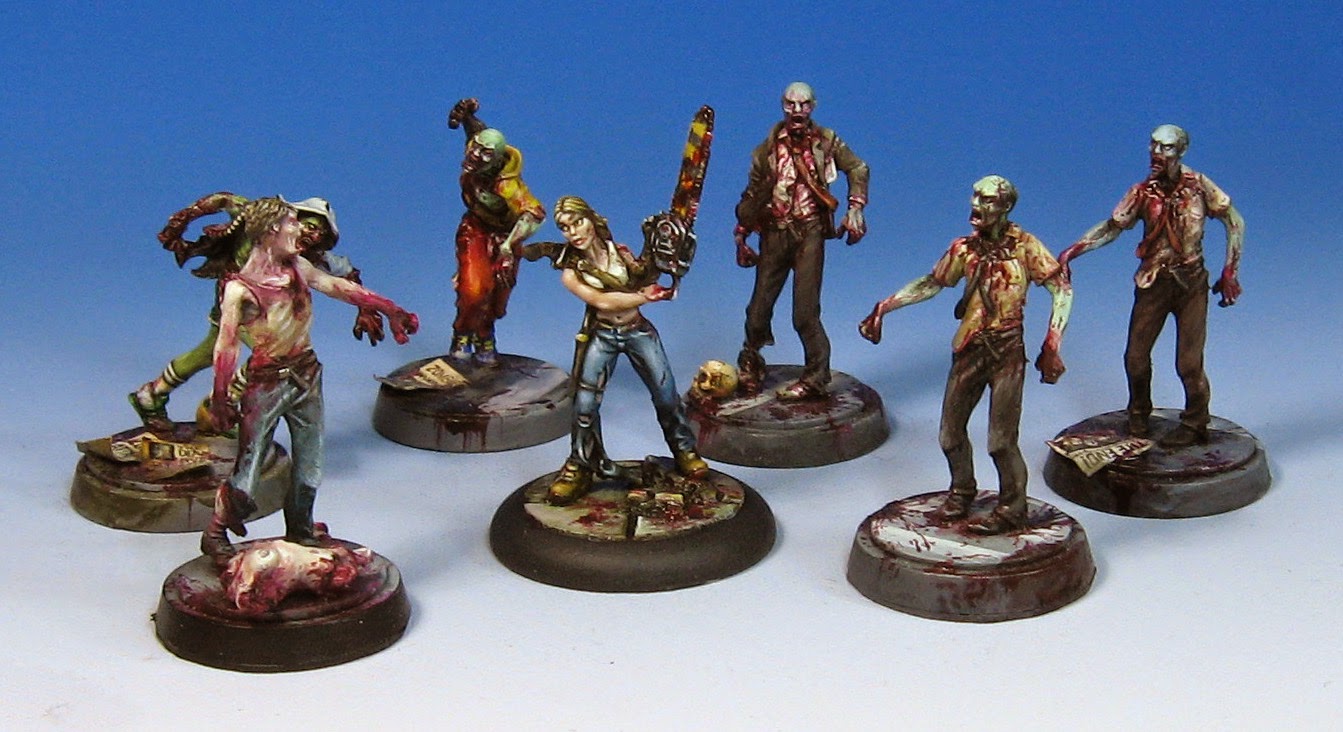 She's not quite sure what he new friend is all about... 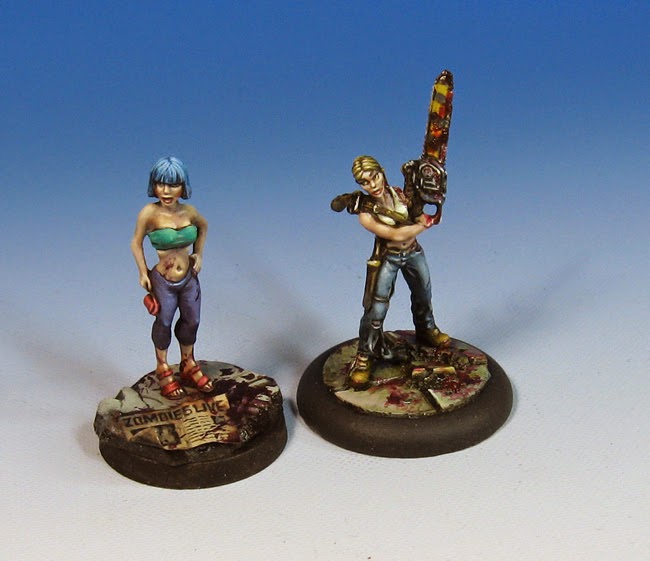 But Disco Stu and Ranger Rick show up as reinforcements. 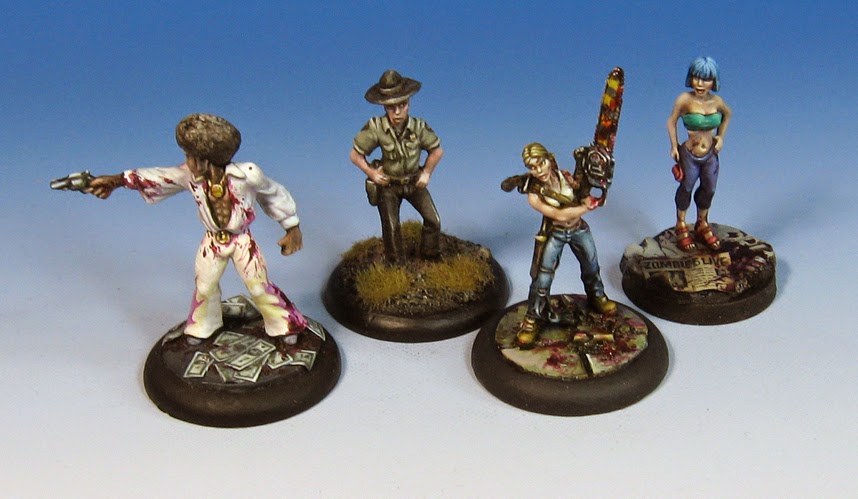 Good thing, because those zombies are ready to electric slide! 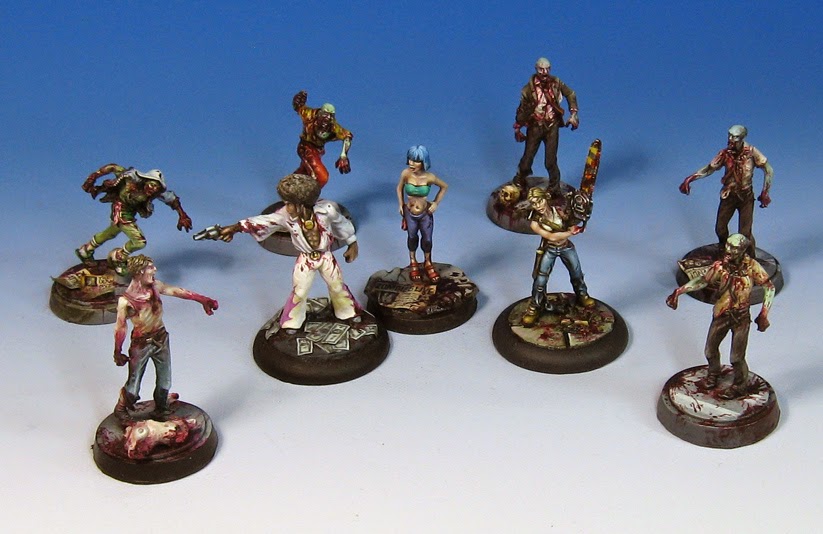 I think everyone's going to slide a lot, given the amount of blood & guts they're gonna splatter on the ground! 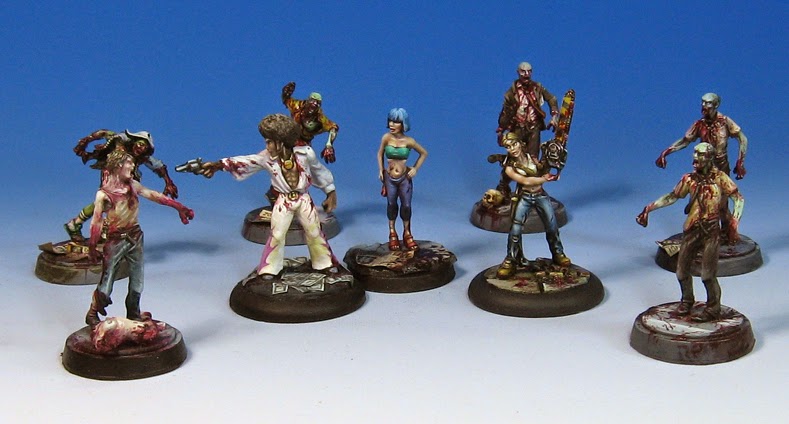