Risen from the Dust 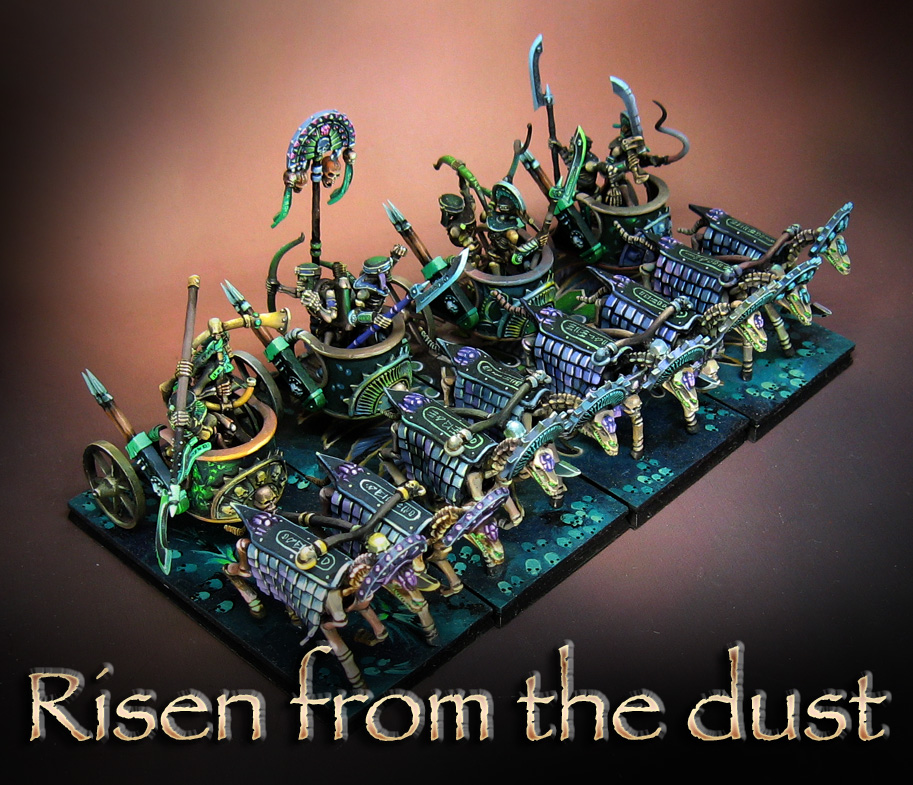 Here's a collection of chariots which I made for the Tzeentch tainted Tomb Kings army a few years ago for an Adepticon tournament.  I had a lot of fun converting and painting these!  I also learned a great deal about a number of new techniques and materials. 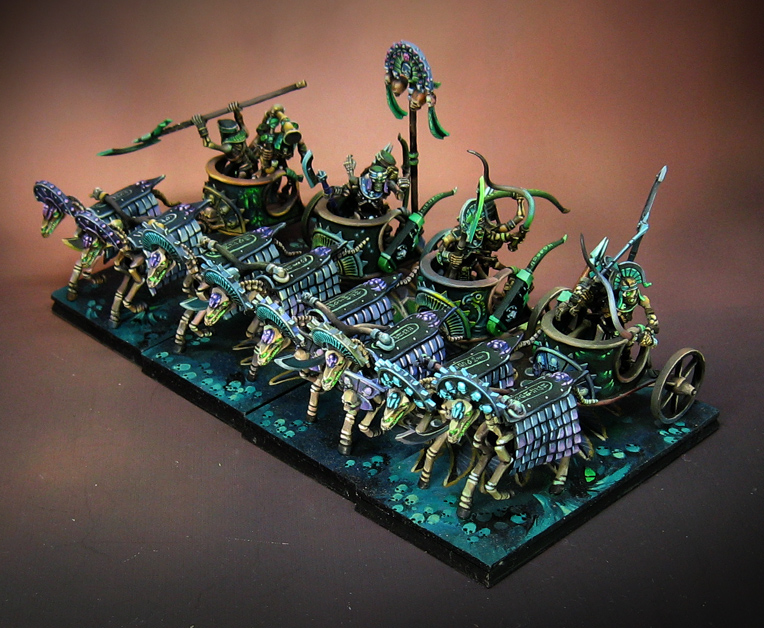 I had never used the Vallejo fluorescent paints until this point, so each figure was a new learning experience.  As you will see in these images, no two skeleton warriors, horses or chariots were painted in the same colors.  In fact, the colors vary greatly on one single element, which created a monstrous challenge! 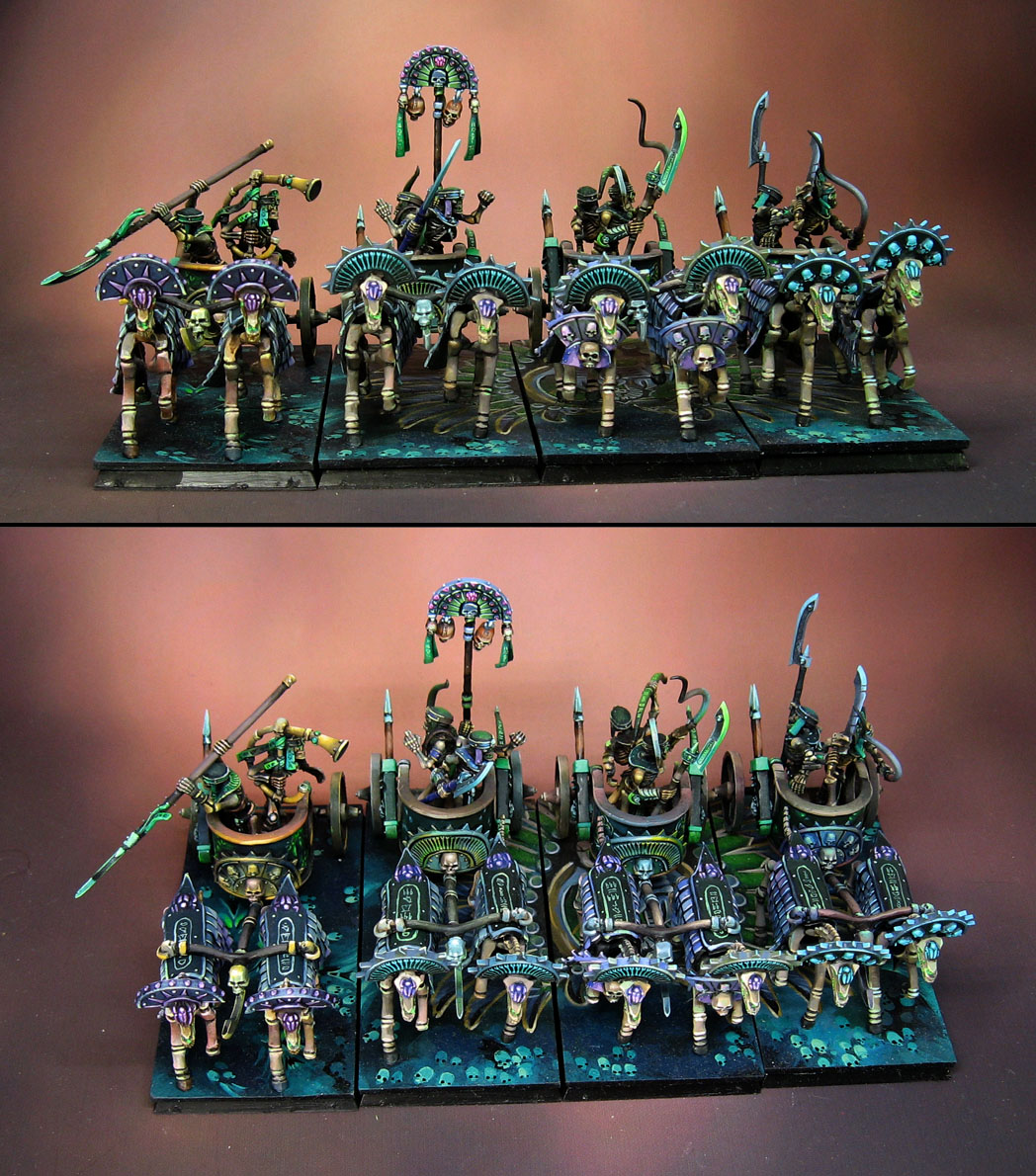 I ended up making several painting videos as a result of this project, and all of those new techniques that I discovered and developed.  One of those was "Painting Demon Marble", on which this entire army was based.  The design you see in the smaller inset was the icon of the army, and it was painted on a few key bases.

Once all the bases in the unit were placed side by side, the overall image was revealed. 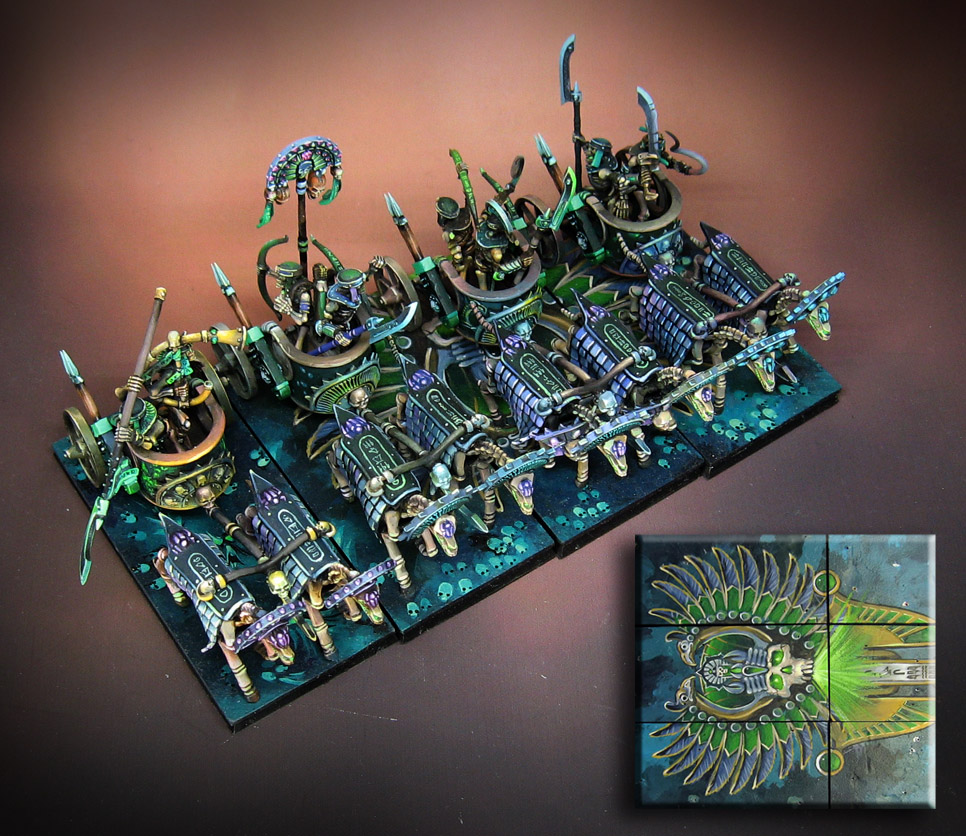 Even the placement of the horses, chariots and crews was complex, to ensure that everything would fit and "rank up" on the movement trays.  To make that task even more difficult, the command figures of standard bearer, champion and musician had to go in very specific locations.  Many shifts in this placement had to be made before I drilled any holes into the sculpey! 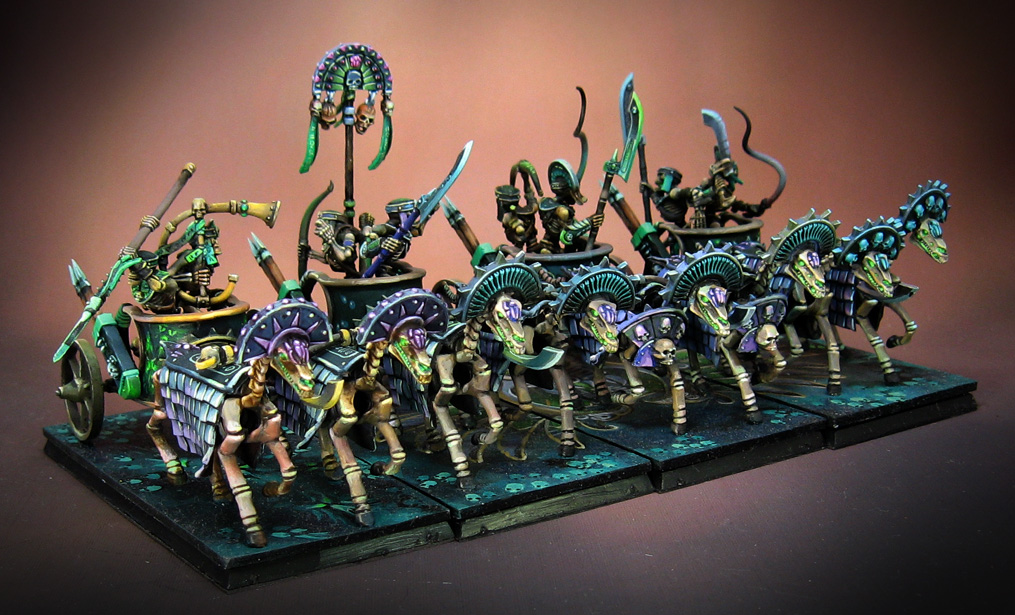 This image gives you an idea of how the armored blankets were done on the skeletal horses.  I made one original, cast it in a press mould, and then used green stuff to replicate the texture over and over.  A sheet of tin foil gave the blanket the added strength to keep its shape during the whole process. 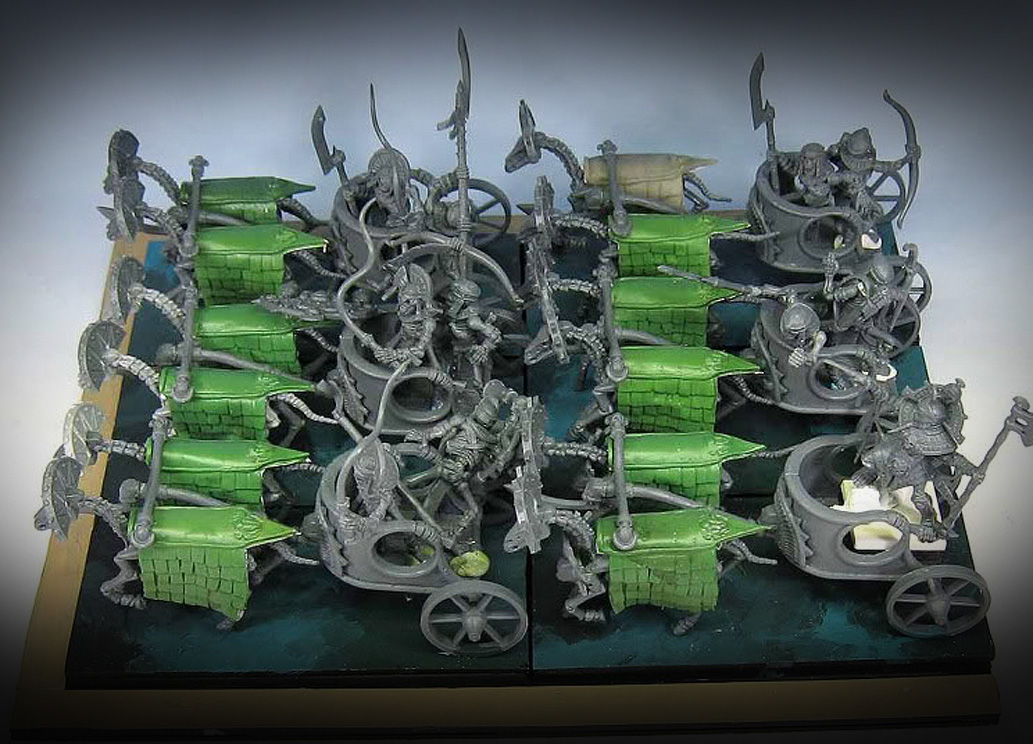 I have never taken any pictures of the individual chariots, so these images are very special to me.  They also showed me how much work I had put into every figure!! 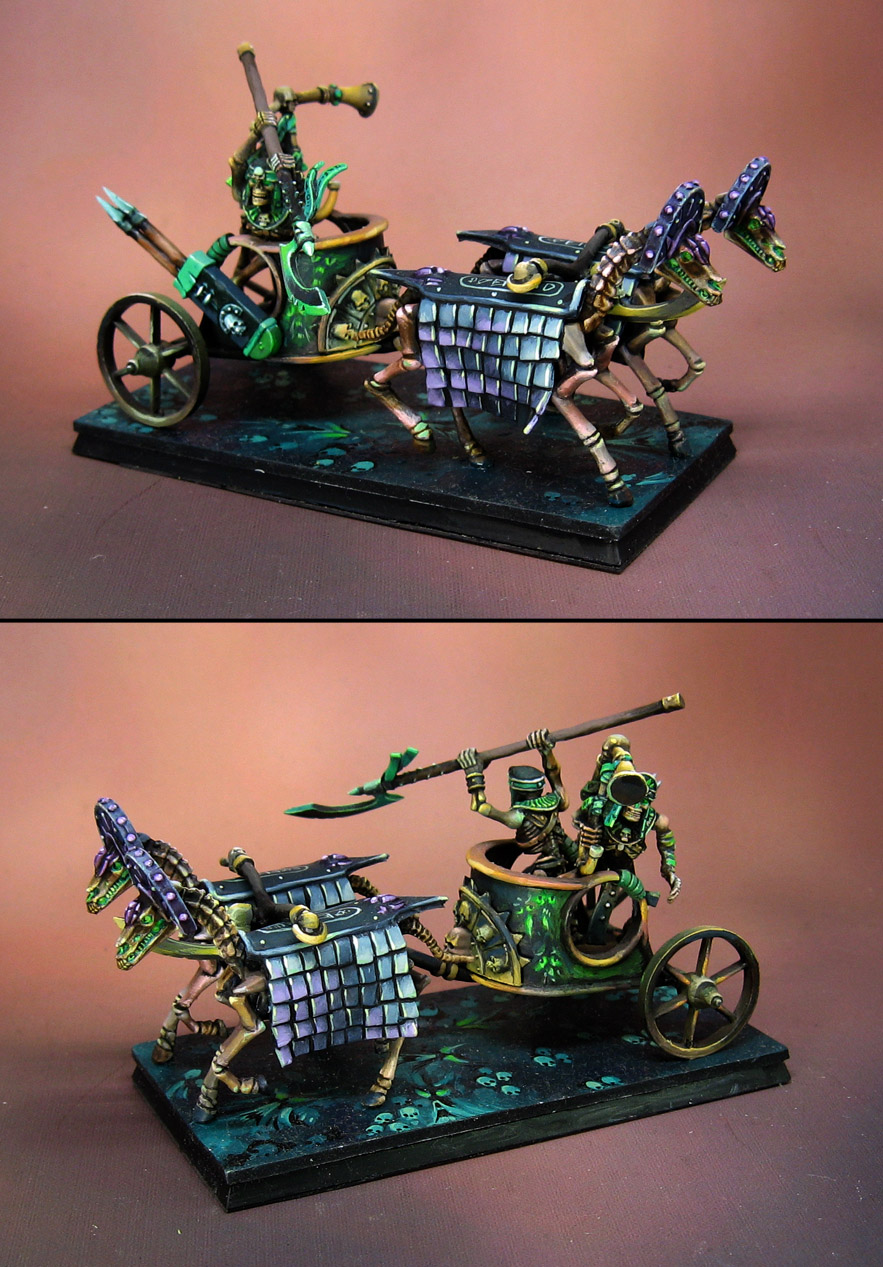 All the subtle color changes and shifts had to be as random as possible to match with the story of the army, but still follow certain rules of color placement and theory.

As you look at each image from these various angles, you will see that even the wildest colors are balanced by more muted, darker shades.  Also, colors are not "isolated", meaning that they are repeated over and over again on the horses, crews and the chariot itself. 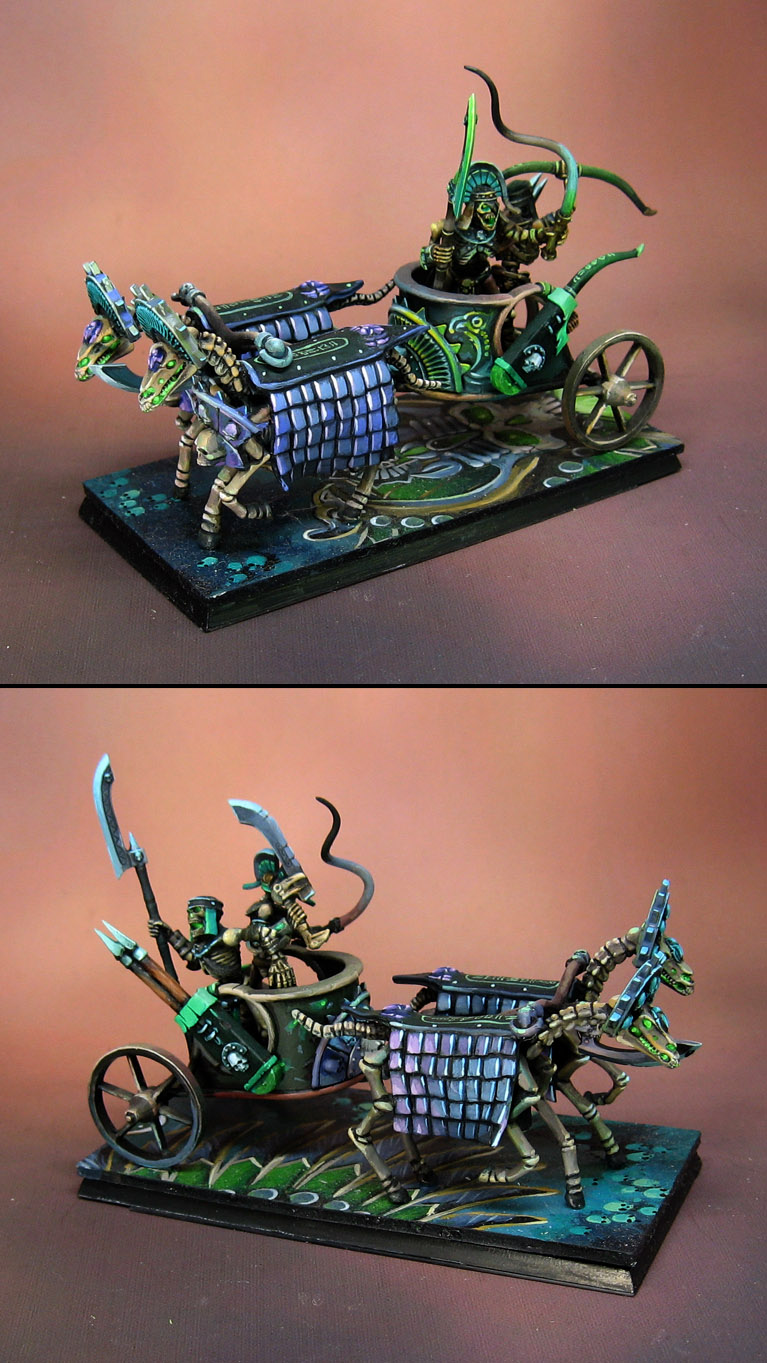 Every so often, there is a tiny hint of the "untainted" original color... a little bit of wood or even a hint of gold.

You can read all about the story of this army, the creation of the huge display board, and much more in the Tomb Kings army section of the blog...