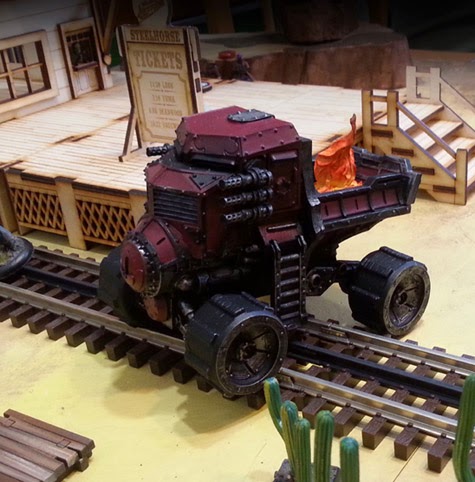 When we last visited the town of Wappelville, the Outlaws were smuggling in desperately needed drapery material at the behest of Miss Fannie May, proprietor of the Chateau Du Wappelville.

So much was needed, they decided to bring it in using an Ironhide heavy support vehicle.

The Outlaws were joined by another fashion concious member, Apache Kid.

His nifty glowing bow and Spirit Aim could prove quite useful in keeping the marauding bands of Lawmen at bay.  You can see him hiding behind the control house of the RJ-1027 plant. 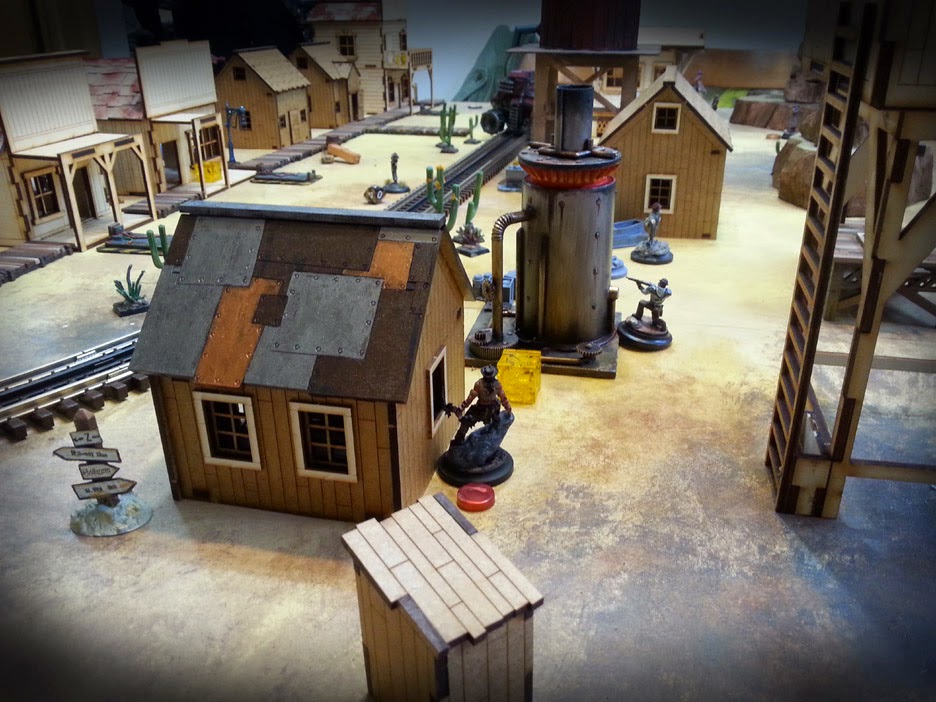 As you might recall, the Ironhide got itself hung up on the train tracks momentarily.

The Lawmen would seize upon this opportunity, in the form of Deputy Berenger and the Quad shotgun light support.

We see the Deputy (who hates fancy drapes) taking lethal aim at the Ironhide. 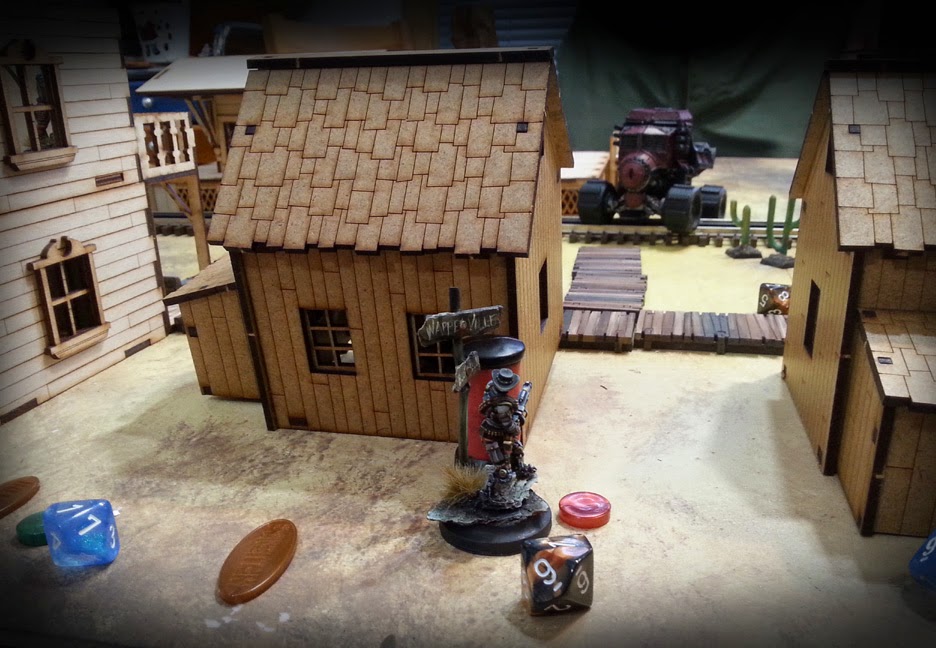 With all firepower available focused on the Ironhide, it was inevitable that it would suffer a fiery end!  The passengers were forced to disembark and make a run for it! 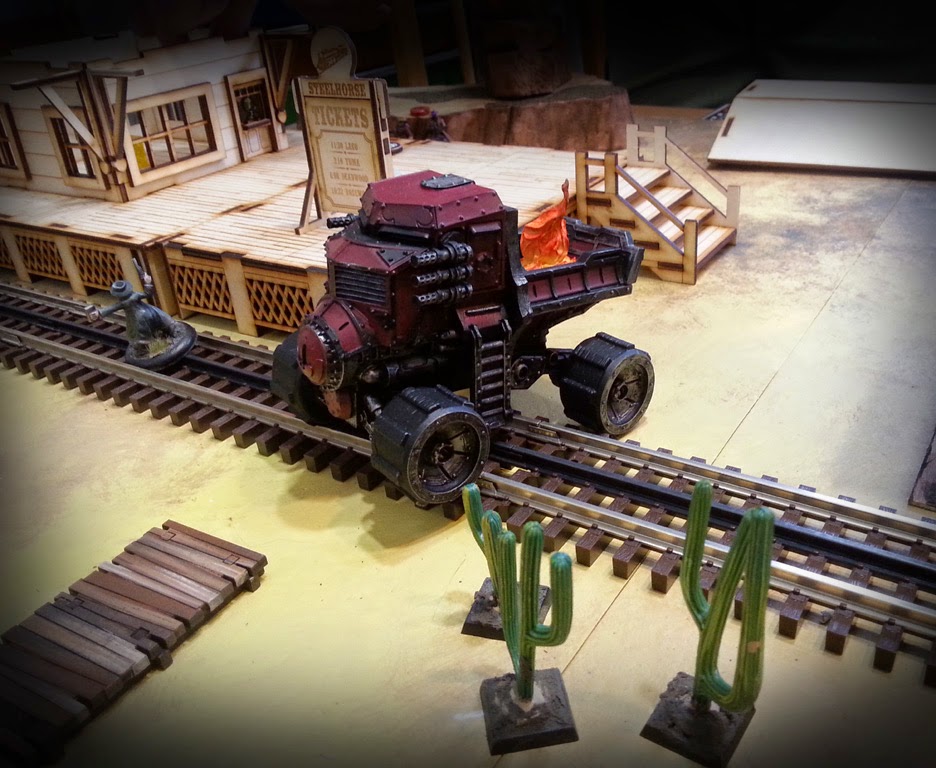 With that threat neutralized, the Lawmen could move on to other targets. 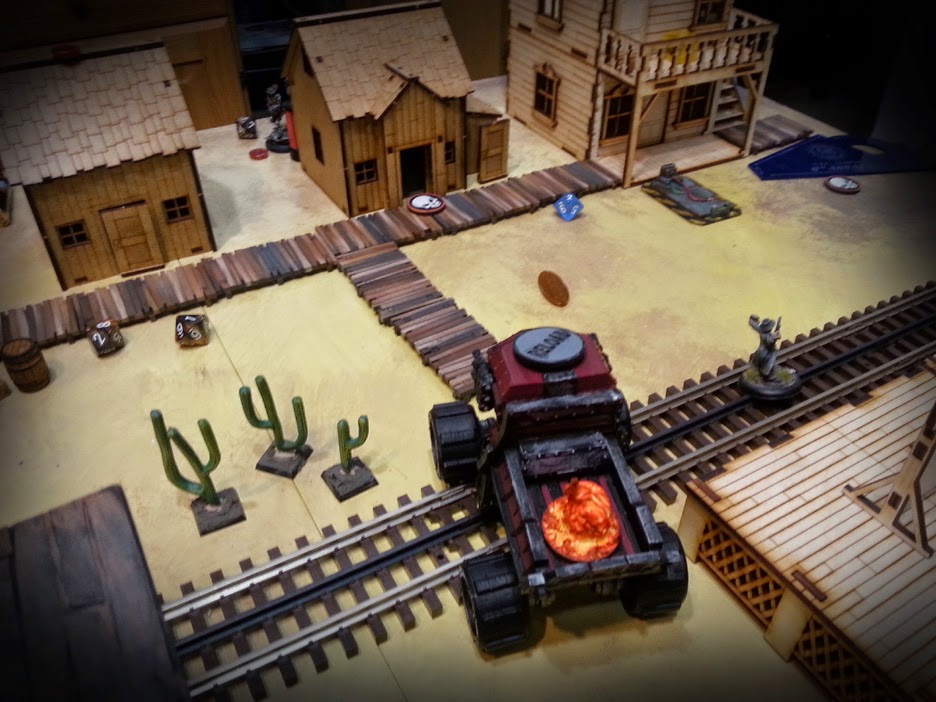 Fatman and Robin take shelter behind the Train station.  Doc Long Tree would attempt some Bad Medicine on a wounded hired hand, but the snake oils had the opposite effect, killing the Outlaw!

Perhaps Doc is an agent of the Lawmen after all... nobody would be surprised if the Earps hadn't made it part of their devious plan for Wappelville. 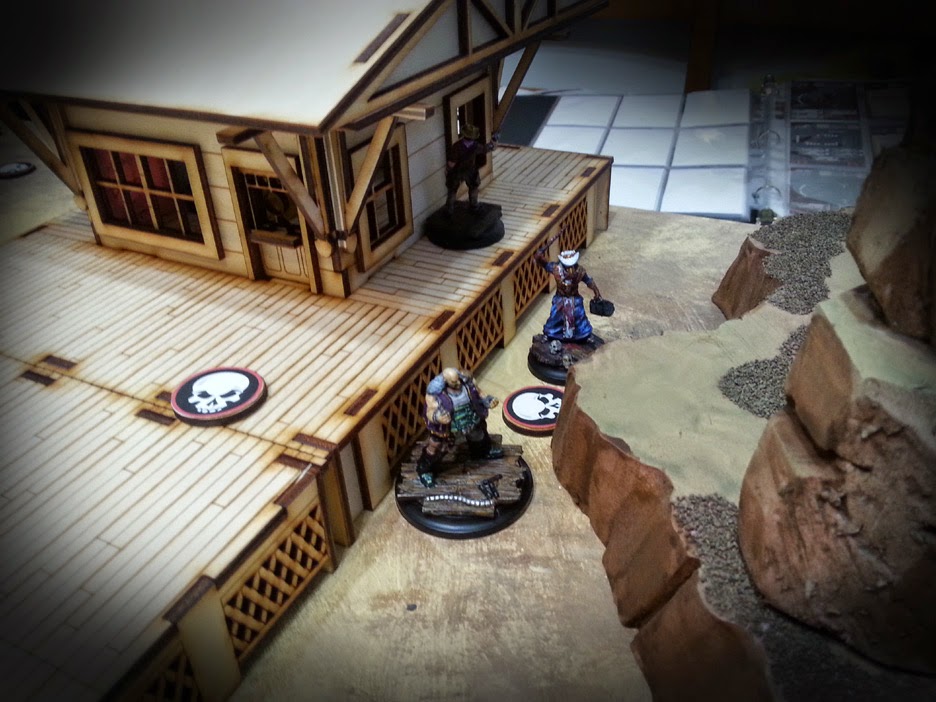 With the Ironhide in flames, and the occupants in full retreat, the rest of the Outlaws attempted to hunker down, as you can see by the pink "take cover" markers on the left.

This is another aspect of the game that we enjoy.  A figure can go prone, take cover, and so on, thus improving its defensive position, even when 'out in the open", so to speak.  These additional choices mean more unpredictability of your opponent's moves, and thus you have less of the dreaded "inevitability" that permeates so many game systems. 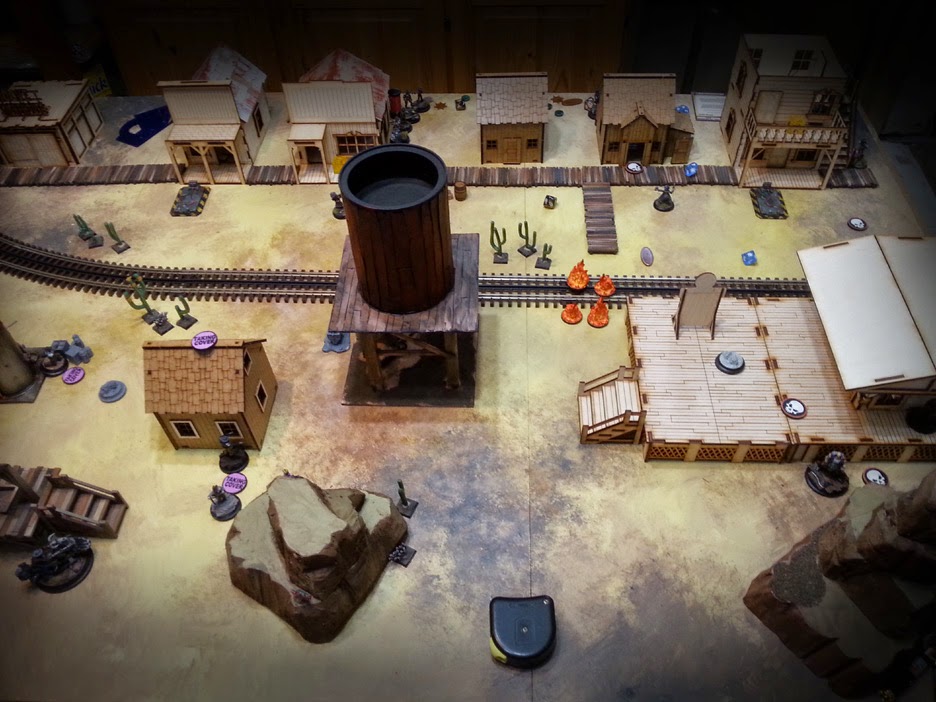 As the Outlaws hunkered down, the Lawmen decided that now was the time to launch an all out assault.  Waves of close combat hired hands dashed across the street and over the tracks to reach the water tower.  Many were gunned down along the way, but Lawmen ignore such trivial things.

Lucky Lou and Nickelback Nate survived countless shots as the bullets whizzed past them.

Lawmen don't need cover, they have their badges, glowing hot red to let you know what your fate will be when they catch you. 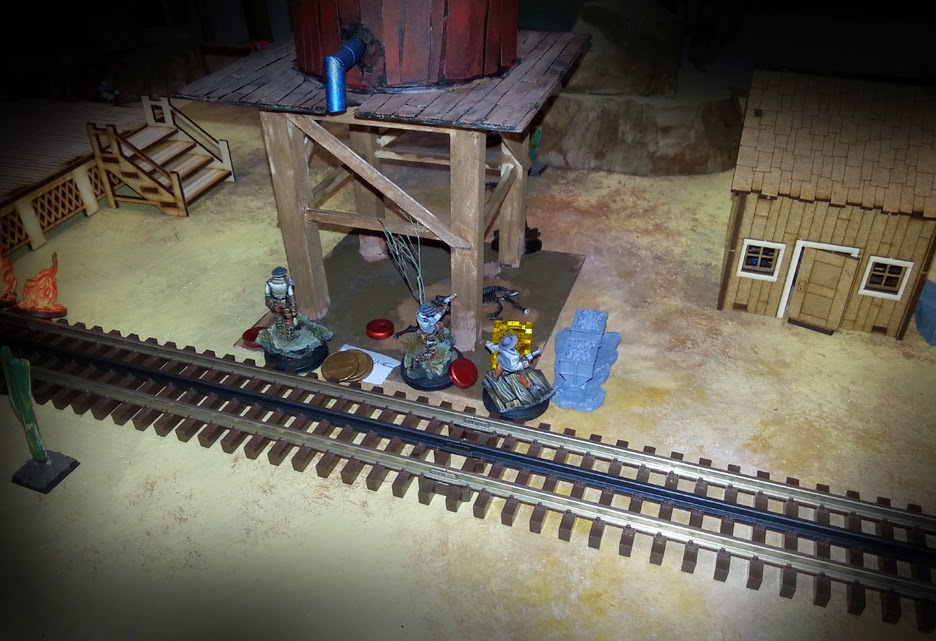 The Outlaws made a few desperate long range shots with their missile equipped Iron Horse, to no avail.  It seemed as if nothing could stop the Lawman onslaught. 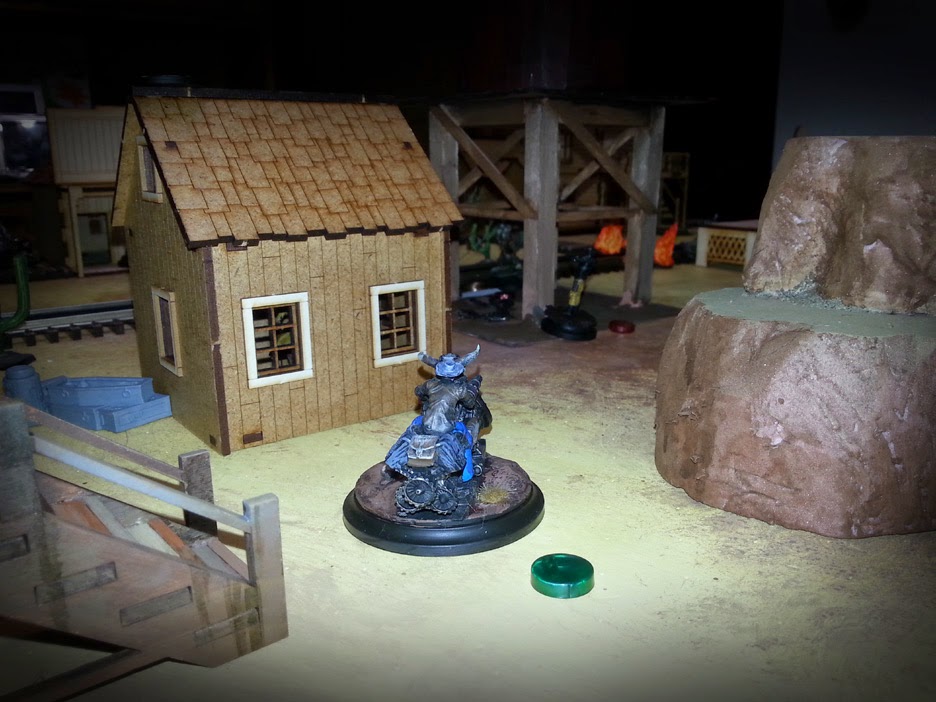 As more shots rained down on the Lawmen by the water tower, they proved their mettle by never flinching.  They knew that Karl Fredrickson would soon be on his way, teleporting to the tower by way of his Portal Glove.

If the center could be held, the battle would be won!! 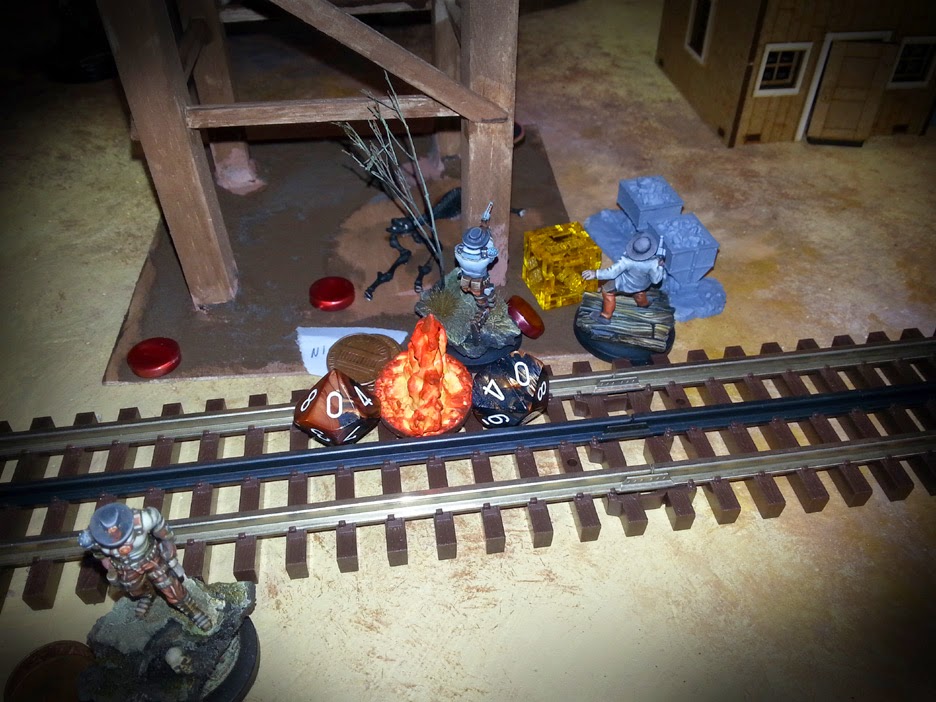 Deputy Berenger cut down more Outlaws with his dreaded grenade launcher.  Fat Man, Ike, and many more would either succumb to the blasts, or simply flee in terror.  I think many of them regretted ever leaving interior decorating school. 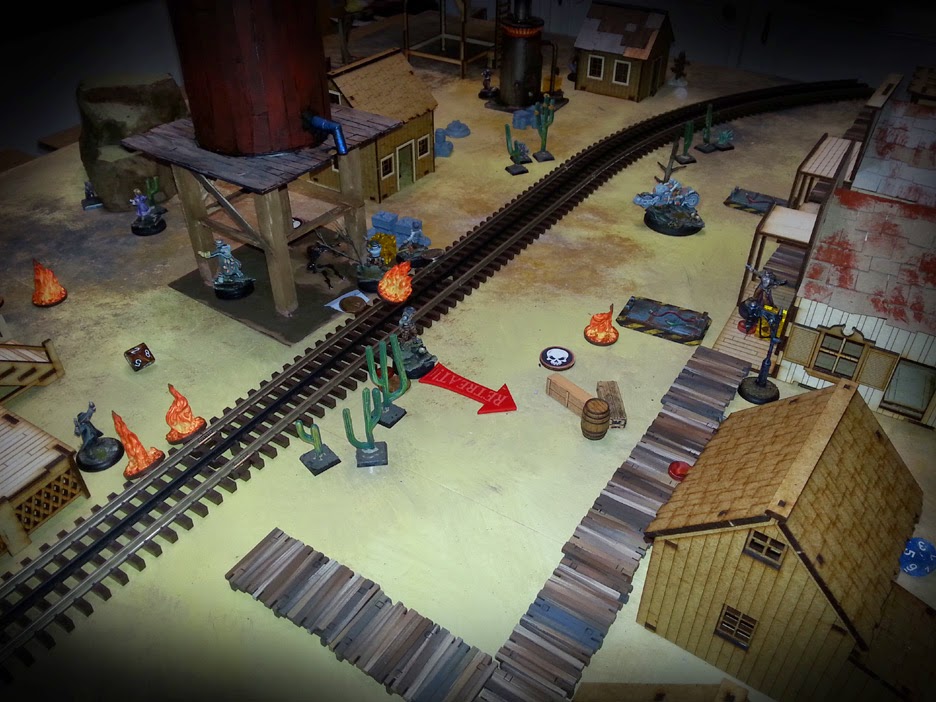 It was all over by the time Fredrickson appeared right in the midst of the few remaining Outlaws.  They were terrified of his rail gun, which would cut a swath of devastation right through their hiding places.

Slinking away from the outskirts of Wappelville, Billie knew that Jesse would not be pleased.  Those fabrics had come from Europe, and would be hard to replace.

The despairing citizens of Wappelville would have to live with the aftermath of the violence, and the hideous decor of the Lawmen. 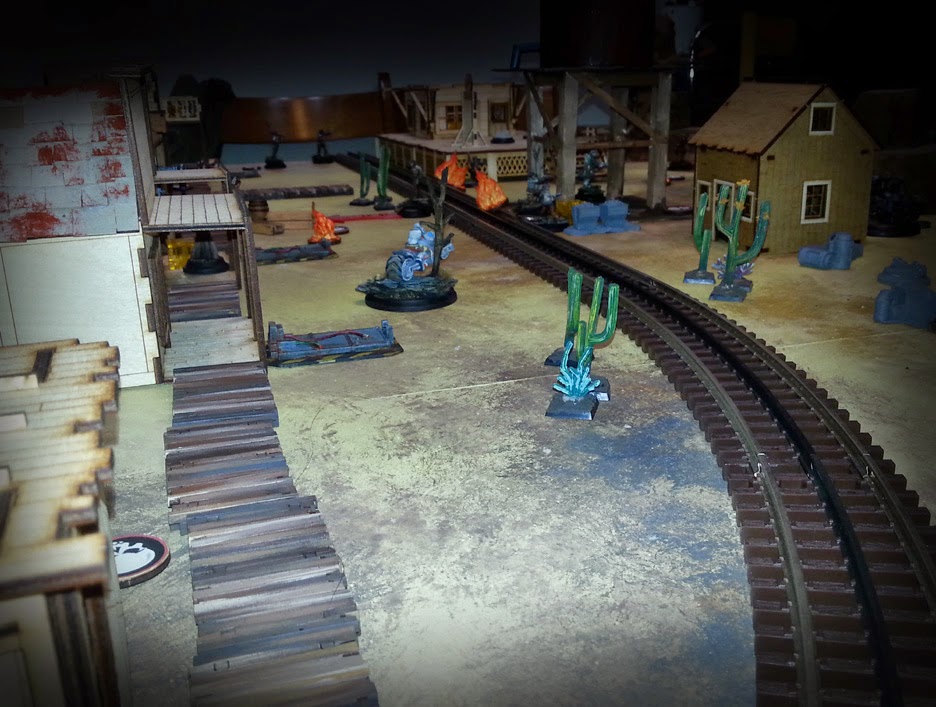 Let me show you my club 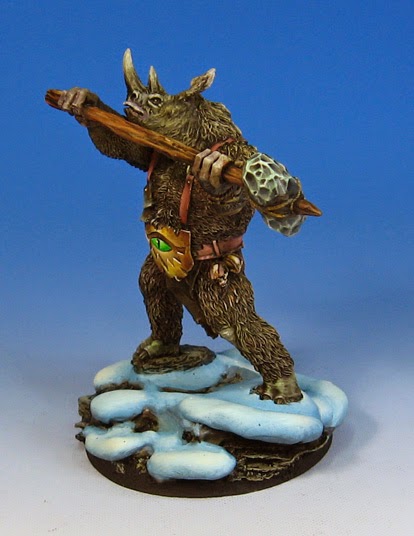 As with all these huge figures, the base is dreadnought sized at 60mm.

Believe it or not, these get even bigger.  Wait until you see the champion and the standard bearer!