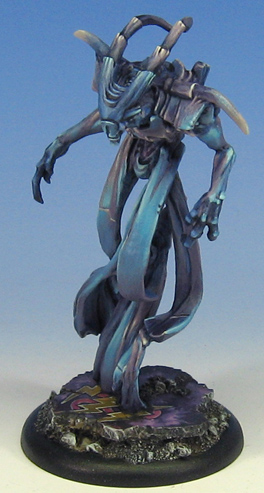 This was a very challenging piece that I painted for Dark Age Game.  It is an Elemental for the Dragyri Air Caste.
There were a lot of pieces involved, and at the time it was all metal.  I did have a lot of fun with the colors though!! 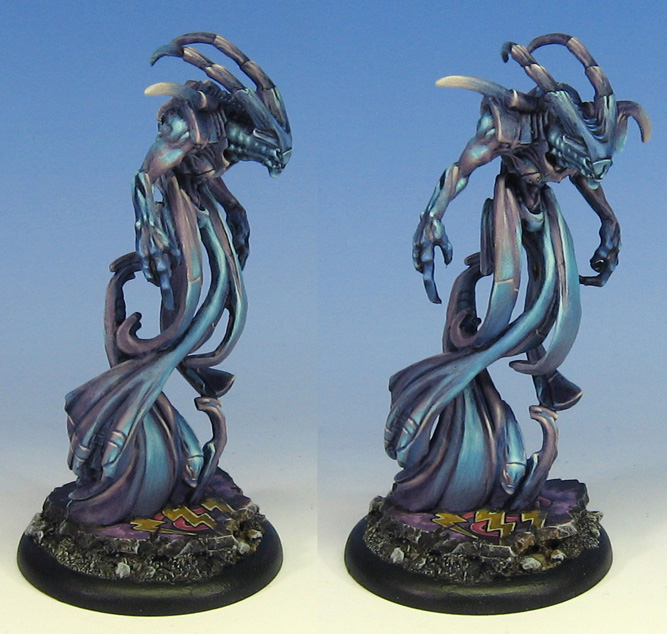 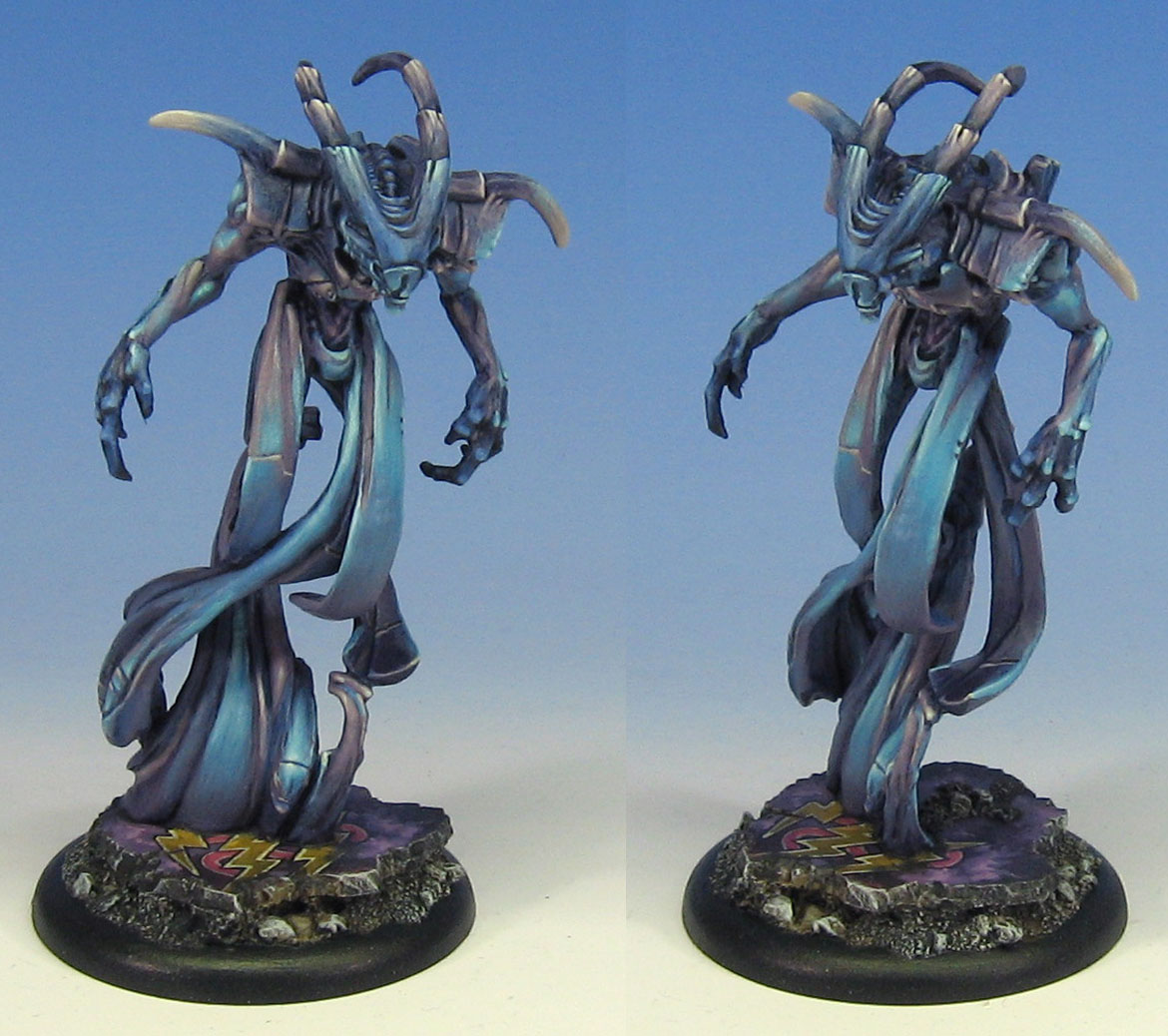 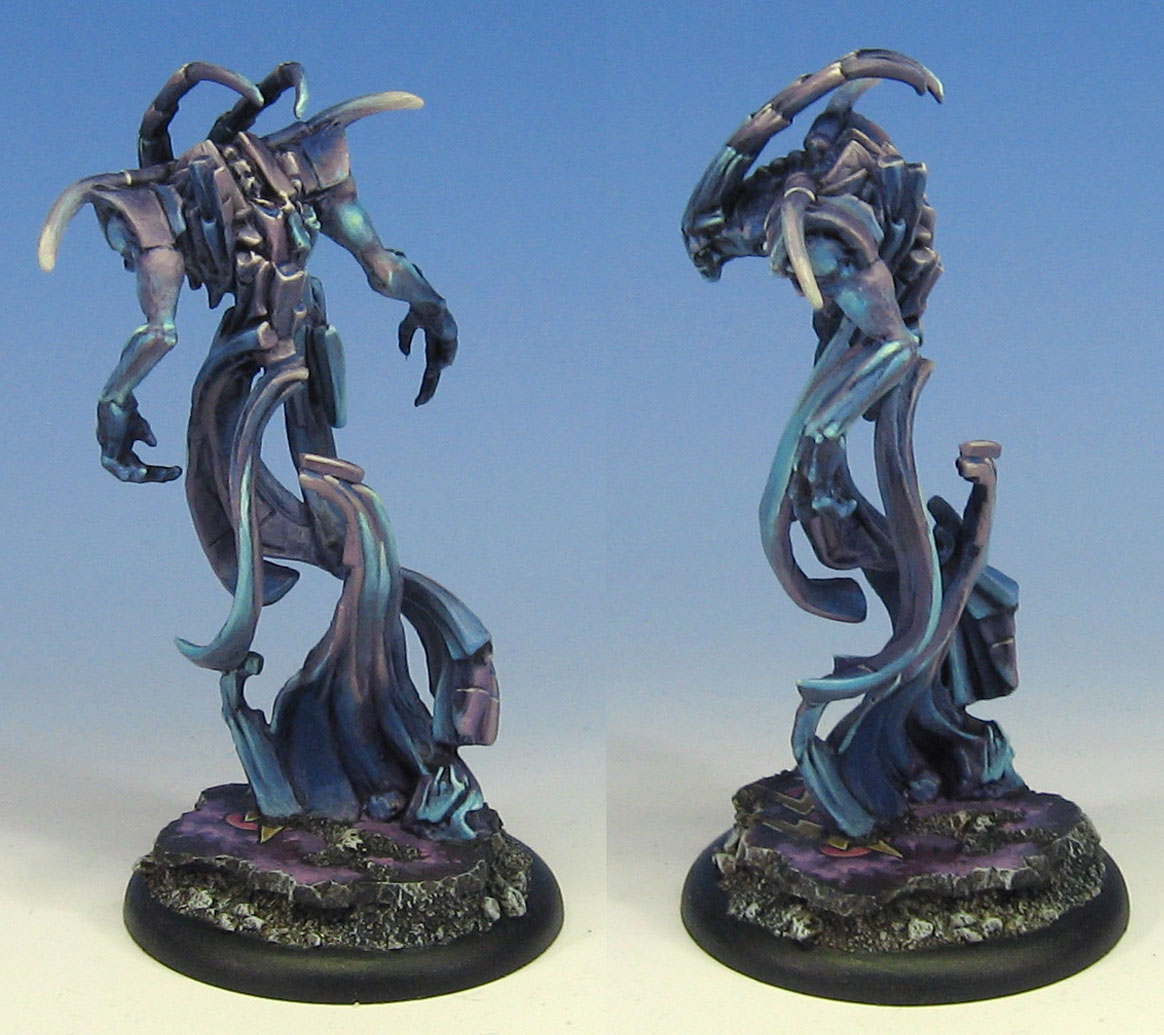 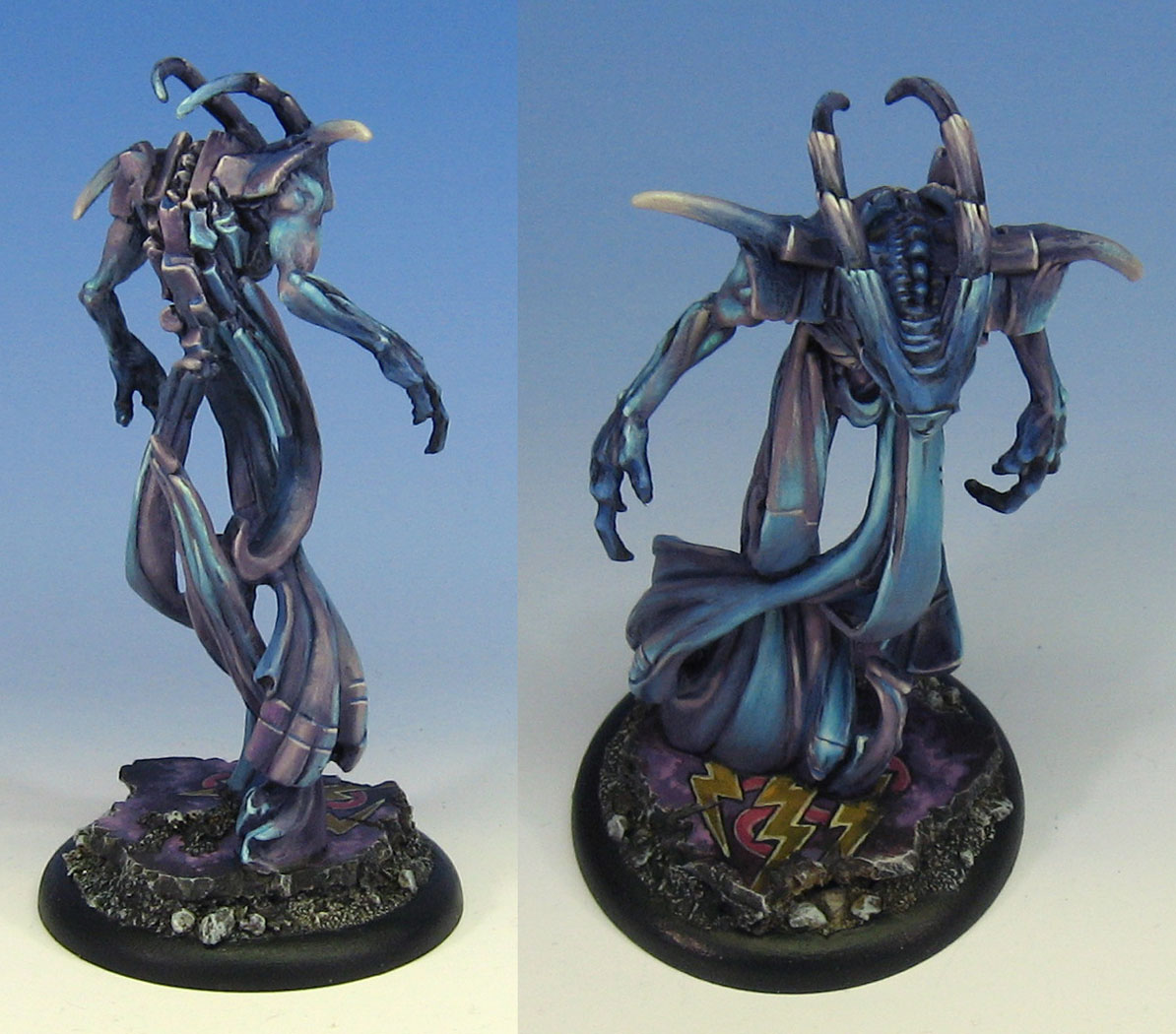 Posted by wappellious at 7:30 PM No comments: 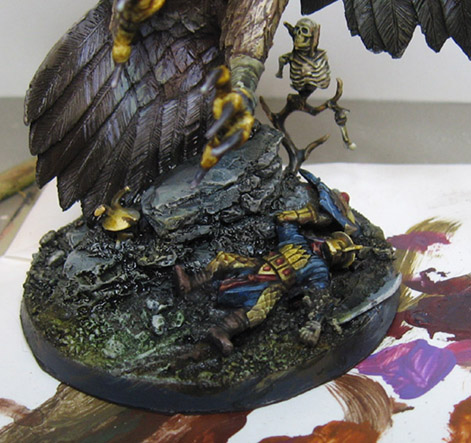 Today we have the next stage in the painting of Gwaihir, the converted Coolminiornot eagle.

As I mentioned in the previous post, the general plan was to have cooler colors on the ventral sides of the wings and the chest, with warmer tones on the dorsal sides.  I have been mixing a greyish tan with my browns/reds to make these areas that cooler color... 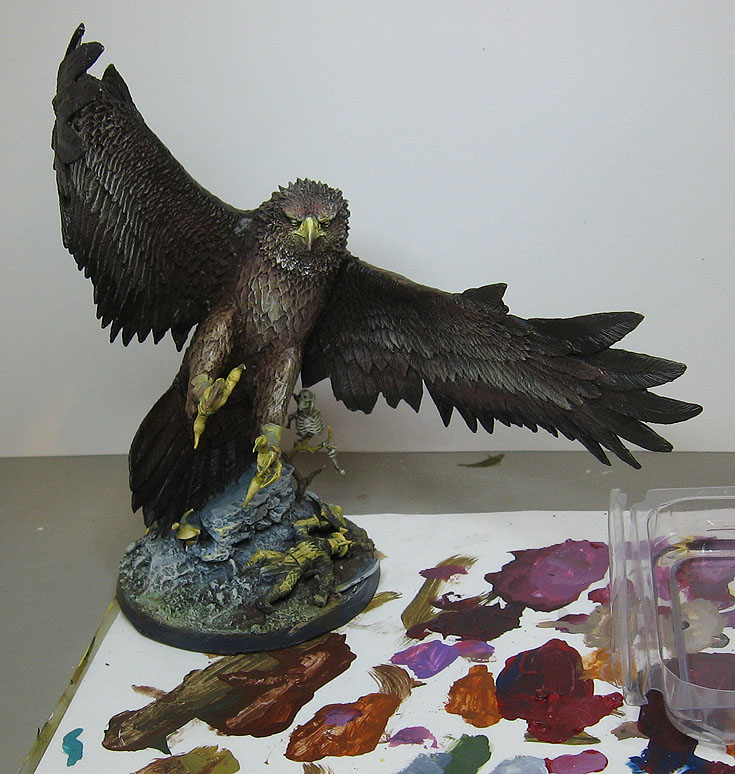 While on the back, I have mixed in more yellows and oranges to warm it up.  I have also been putting more colors on the casualties and the little tree branch bit. 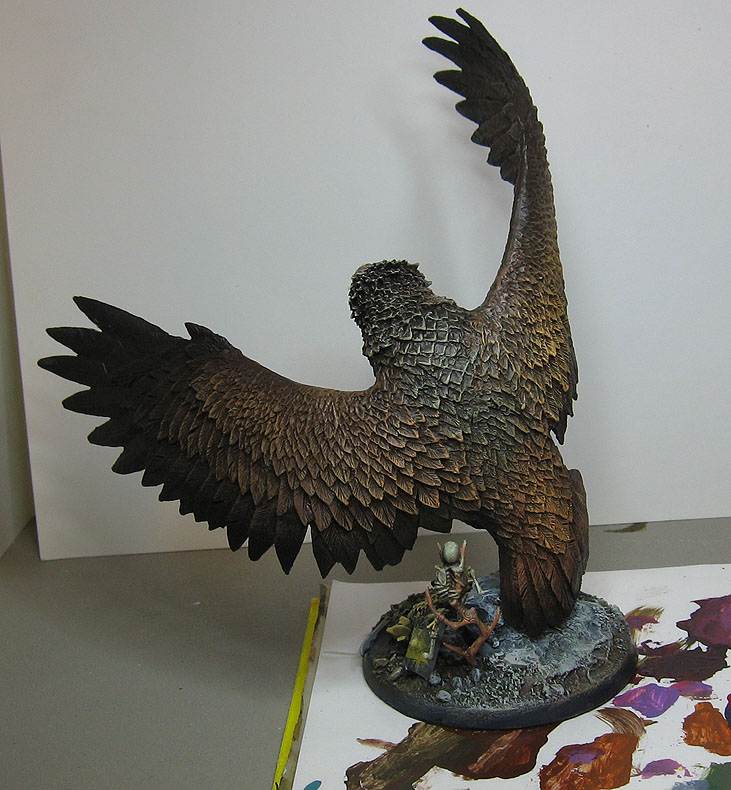 I have been mixing more of the seafoam green into the ventral colors.  I have been using that same color to lighten my greys on the rocks.  This will keep those colors more cohesive, and show the front of the eagle more "in shadow" as he pounces down on his hapless prey on the rocks! 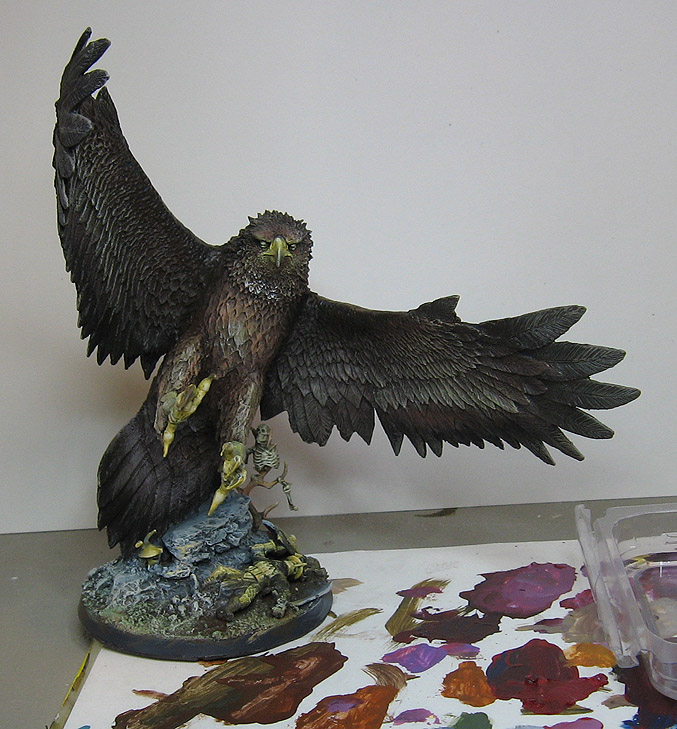 Even though the colors on the back are generally warmer, I did make a section of the neck a warm green (this is where I took off the saddle and sculpted feathers) just to break things up a bit... 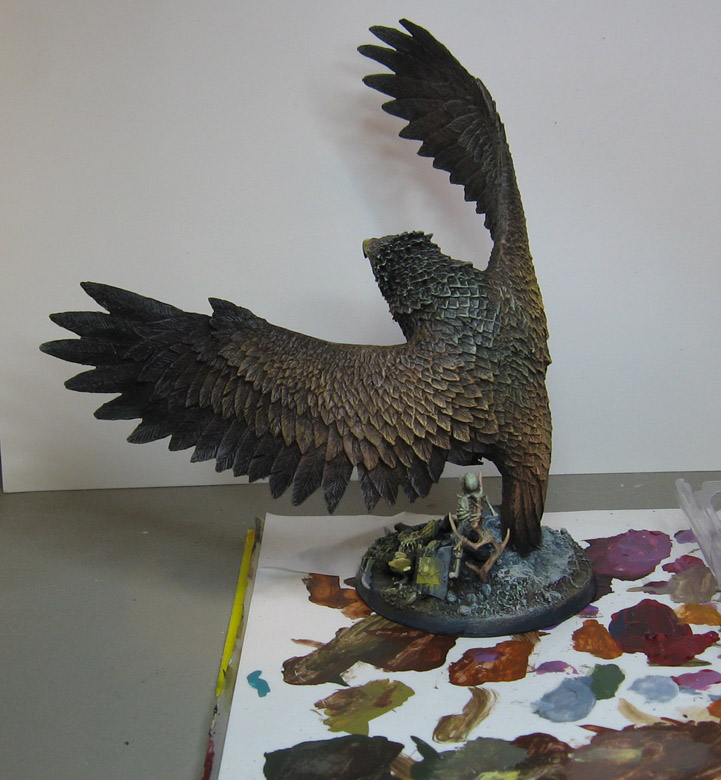 More details emerge on the face.  Some shadows, which were done with a dark purple, and a few lights, done by adding a yellow/white to my brown mixes.  I mixed the seafoam green into that purple to create an alternate midtone on some of the head and neck feathers. 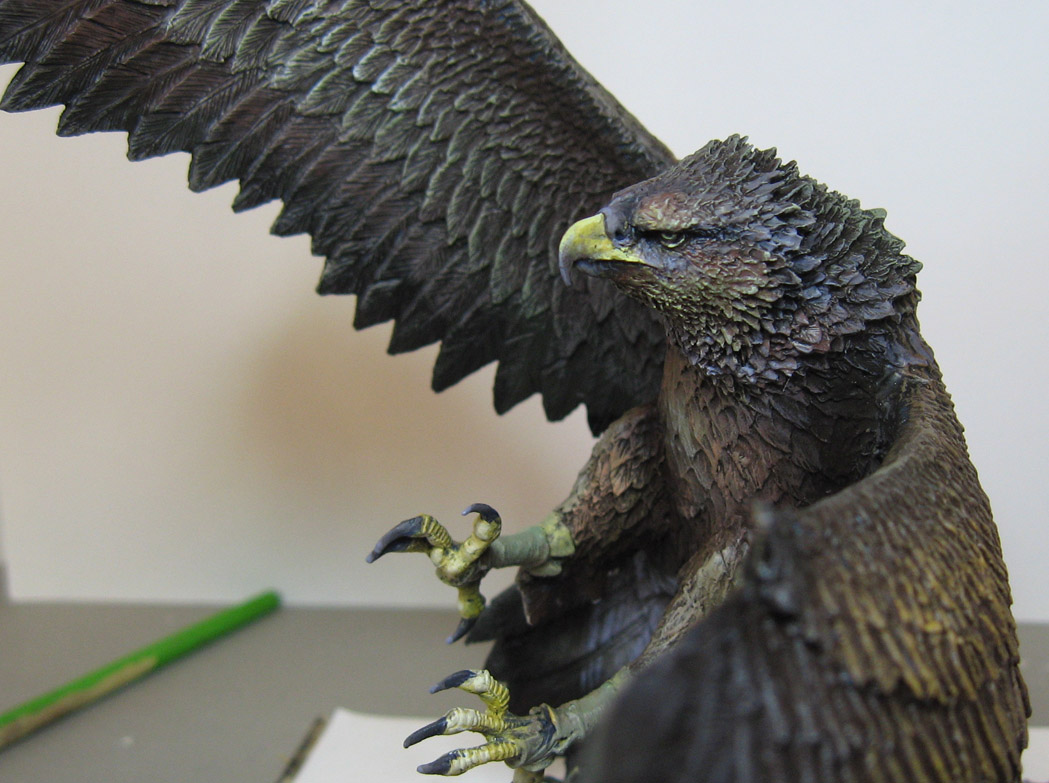 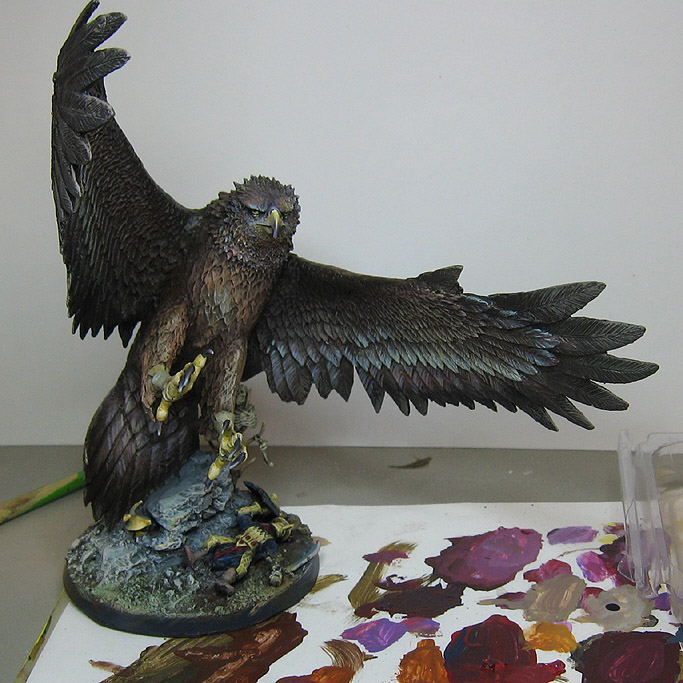 Same on the dorsal side, getting more and more yellow. 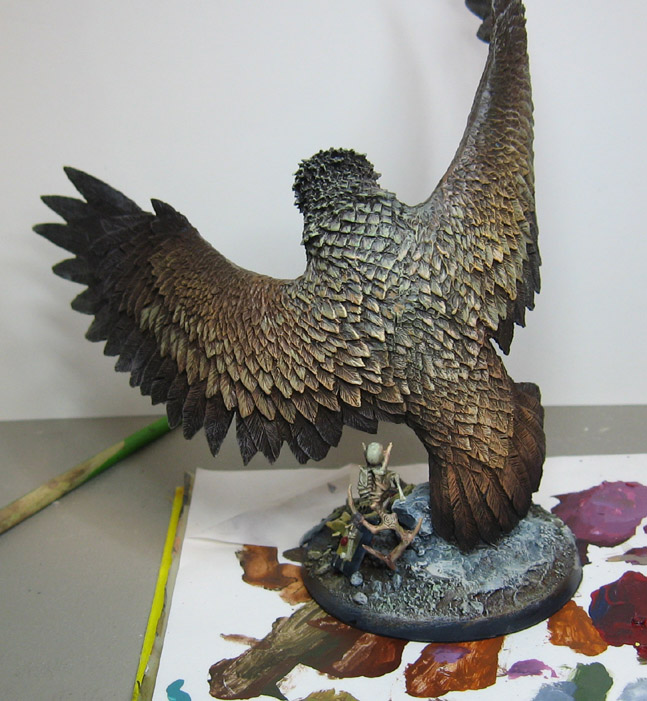 At this point, it was time to start glazing my shadows in.  I had a black a green some browns and a purple glaze at the ready, sometimes mixing them together when needed.  I also had a liner brush with some Reaper brown liner, and that was used to pull out some of the feather outlines on the chest.  I shaded the recesses even cooler, mixing the green and black glaze together, and did the same for the wing tips. 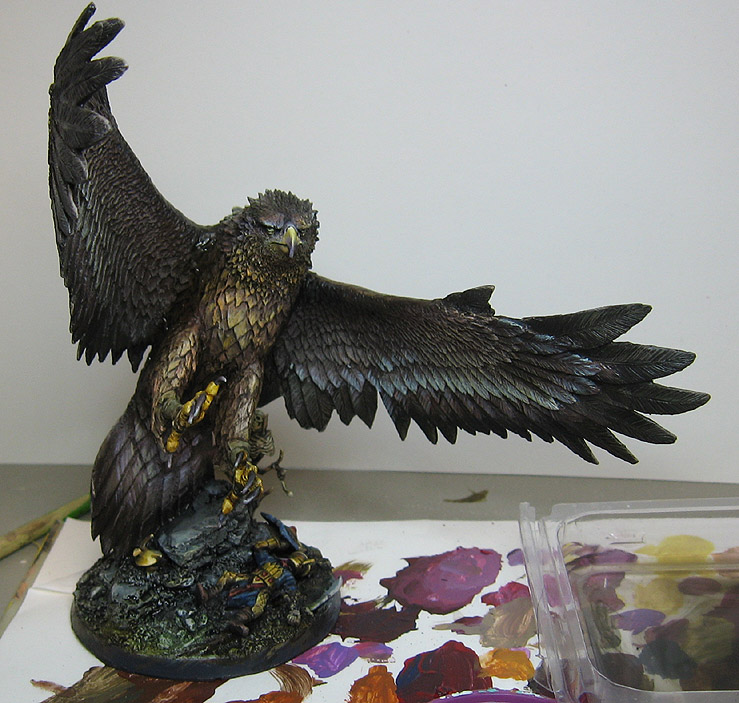 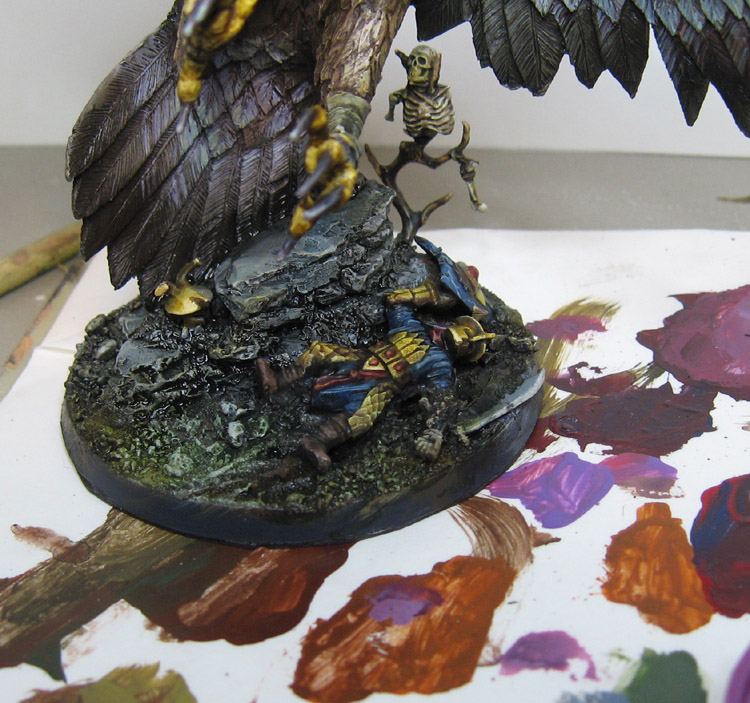 On the back, it was all about the warmer mixes, using sepia and reddish glazes. 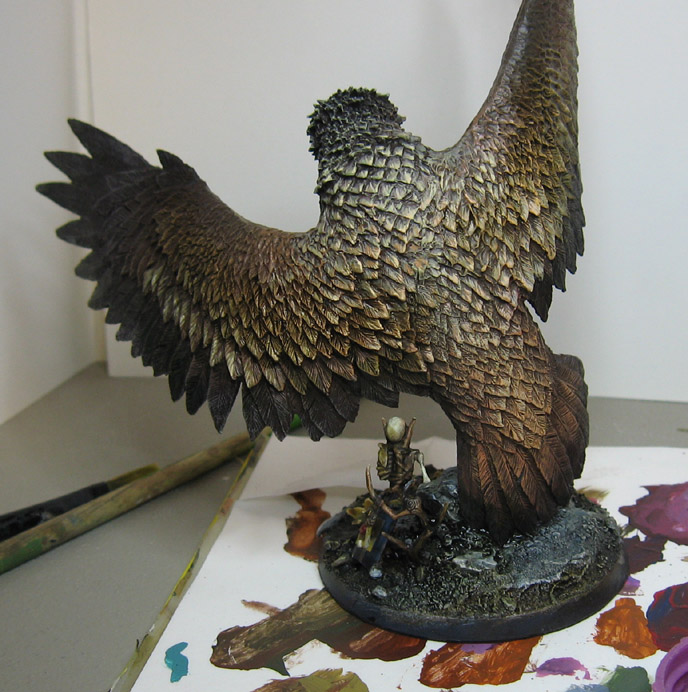 I continue to do a third and fourth round of shading/glazing, enhancing the darks as much as possible.  The darkest glazes are applied to the casualty and the branch bit. 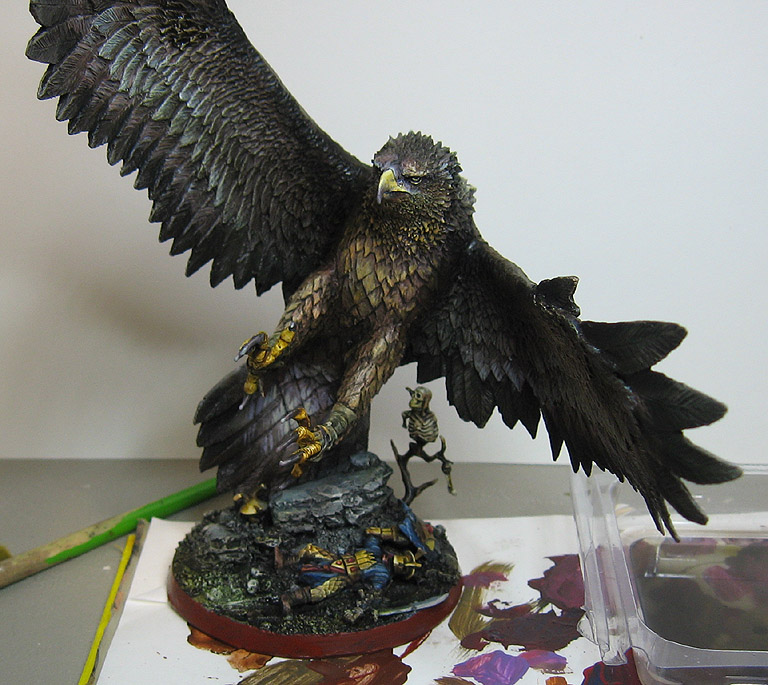 More enhancing of the darker shades, pulling out more details on the dorsal part of the wings. 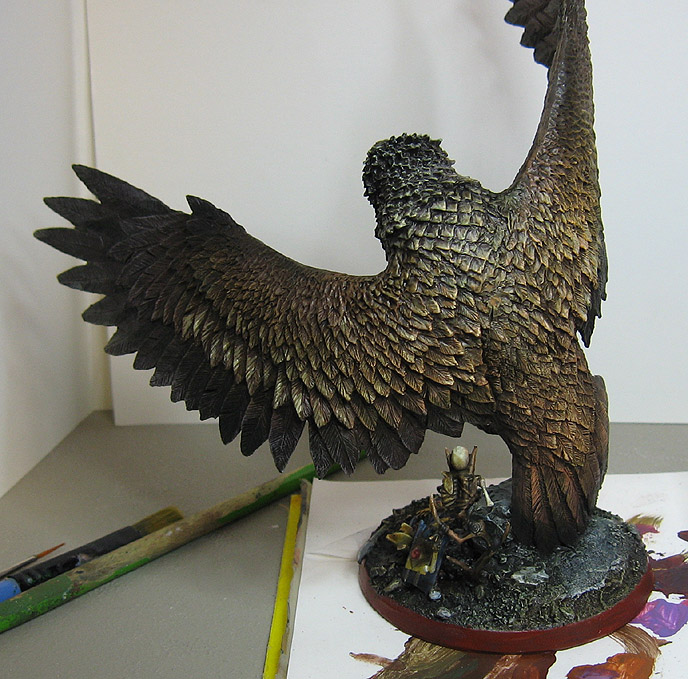 Now it is time to work back into some of the middle tones, and add final highlights! 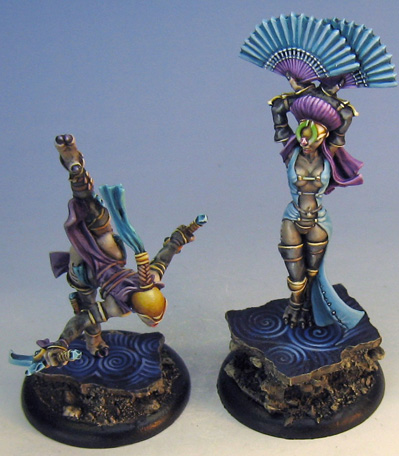 For the overnight hours we have a few Dark Age miniatures that were fun to paint.  This is a Yovanka: 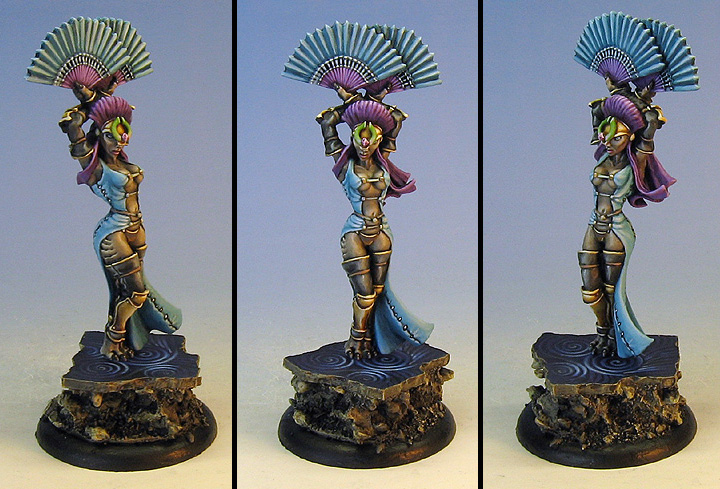 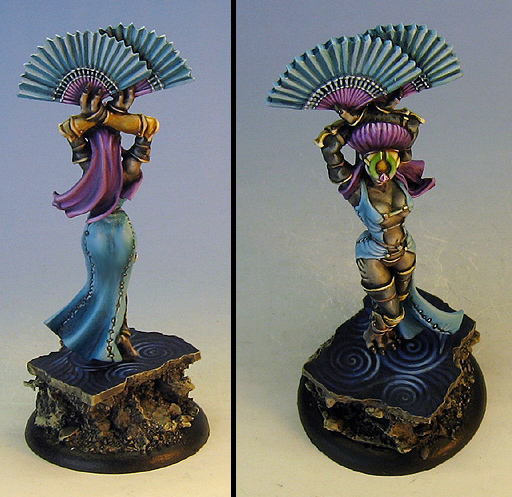 And this is a Whisper: 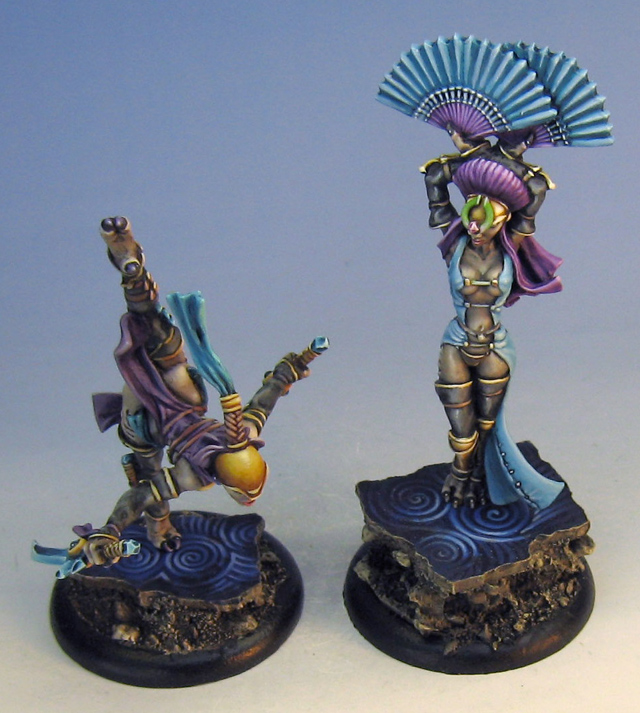 Posted by wappellious at 2:03 AM No comments: