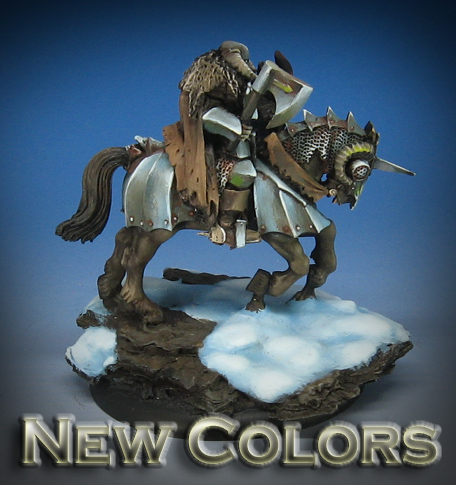 Next up in the series of old time Chaos Knights painted with oils!  As I have mentioned on other figures from this set, a key strategy in color placement was to have some purples and greens in the 'metal' areas.

The idea is to give the metal an additional 'sparkle' by having a few colors that might be considered 'outside' the range you would expect, such as the greens.  Also, purple and green when mixed together can make some wonderful grays!

This is another reason why the eye 'mixes' those colors together and makes the viewer perceive the overall color as gray.

I think I first realized that many years ago when I was still using the GW washes.  It seemed like I always ran out of the black wash and even the blue/brown washes (which I had also been using to make gray).  When those started to tun out, I turned to mixing green and purple, which were in abundance by comparison!

After making that realization. I started mixing pink and light seafoam green to start making gray.  Doing so ensures that you will have a far more interesting gray, as opposed to the 'dead' flat grey that you often find when you get them as jars of paint!

Posted by wappellious at 12:52 PM No comments: