Up on the soapbox. Time to rant! 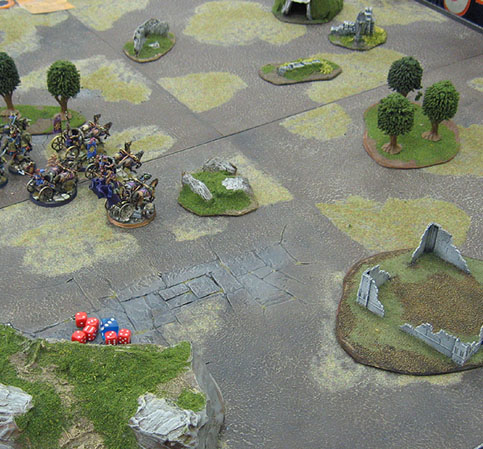 Notice this rather unique "battle" image from my 5th game of the tournament.

Yes, you see that correctly.  Jamie has narry a figure on the table, and the game is about to begin.  That is not by choice, that is just the pure playtesting genius that is GW.

We were playing the dreaded Recon scenario, which made everyone's lives much more difficult.  It should be a fun scenario, but it is poorly designed, to say the least.  The FAQ that came out just before the tournament only made things worse.

Speaking of worse, this matchup (and the resulting reinforcement rolls), was the worse case scenario for this scenario.  You had arguably the fastet army in the tournament... my Easterling Alliance, vs dwarves.  Ouch.  My infantry was moving more than double the speed of the stunties, thanks to the war drum.

What made things a disaster was the bad reinforcement rolls of the dwarves.  As you can tell, they did not show up.

To make matters worse, you have to deploy off a specific point of the board, which creates a very small area in which to deploy.  There was barely enough room for the 4 chariots and for the 6 cav.  Anything bigger... who knows what happens. 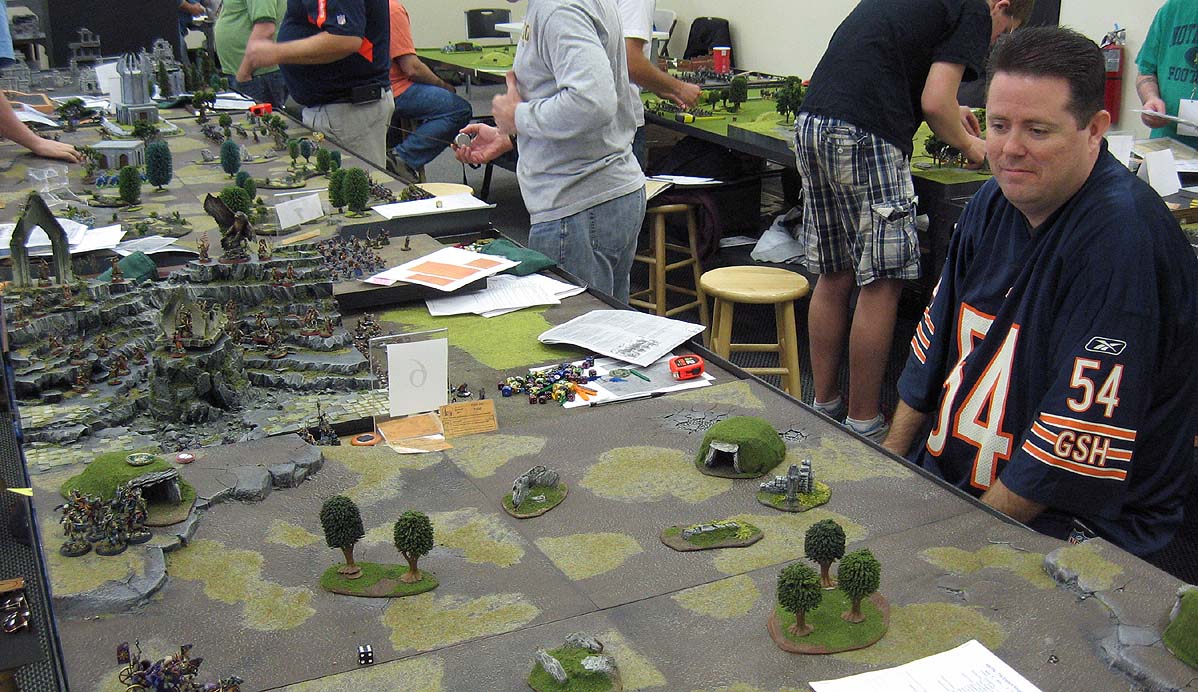 That lead to this situation.  I am almost half way across the board, and there are no dwarves! 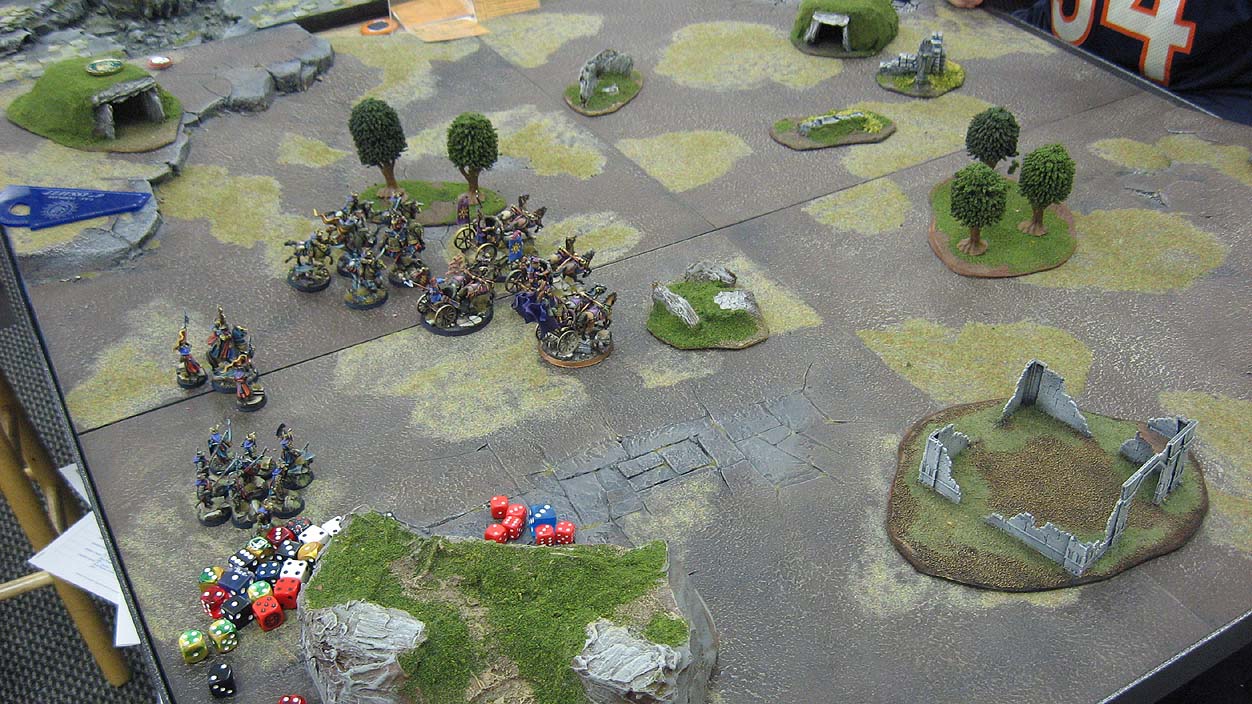 The objective is to get as many of your troops off the board via the opponents deployment zone as possible. Great for me, right?  Not so!

Since none of the guys I would run off the board would count as casualties,  I would never reach my 25% break point (when the game is supposed to end).  So, if I ran off all my guys early, Jamie would simply move all of his dwarves (slowly, of course) off the board unopposed. 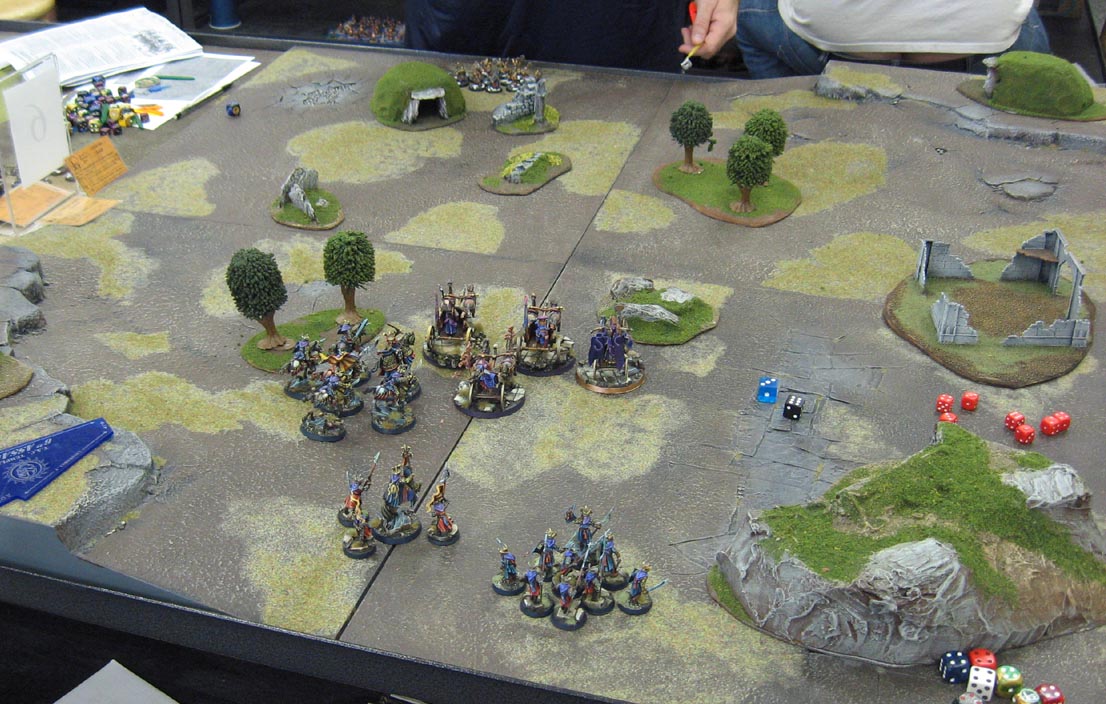 Jamie even had to use a point of might to get the archers on the table (the figures in the right hand corner).

Basically, this is where I lost the game.  I was already feeling very bad about the situation.  All I had to do was weave back and forth with all my fast stuff, and just run by the dwarves.  If they spread out to stop me, they would get pummeled, creating a gap, through which the rest of my cav would run through.

I went off to the left to deny the archers any shots,and started marching my infantry forward as well. 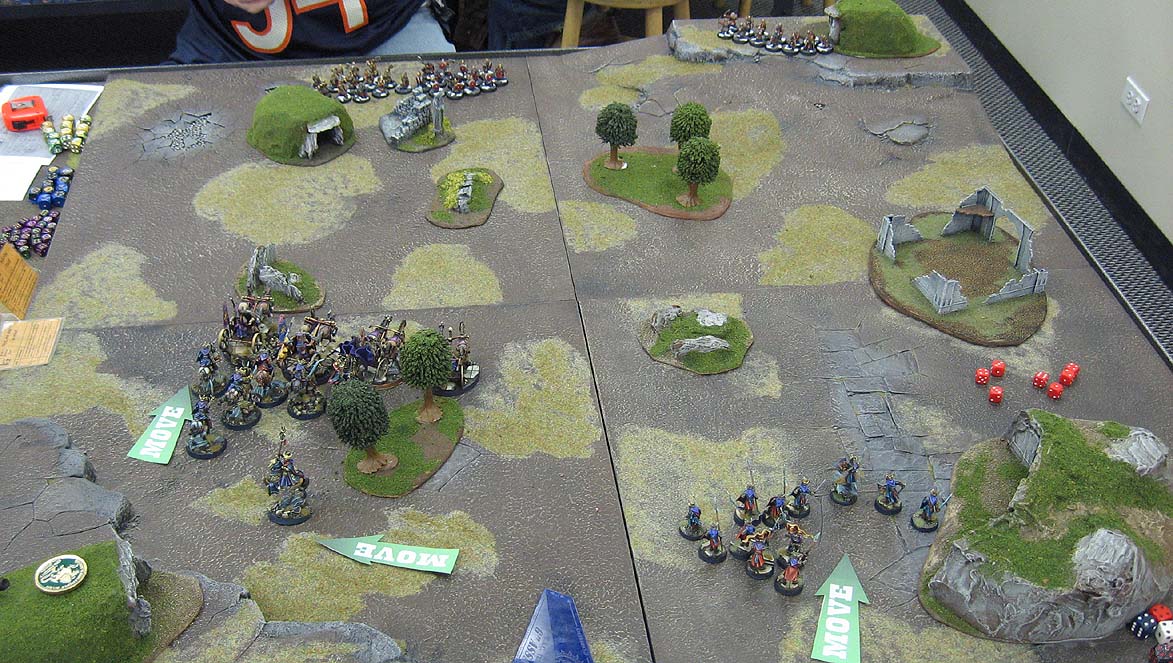 I fake to the left, with the intention of hitting the weaker dwarf warriors in the center.  My original intent was go go all the way over to the right, hitting the archers, who had already spent a point of might.  The infantry would trade places, and form a wall against the dwarves hustling on over to join that fight. 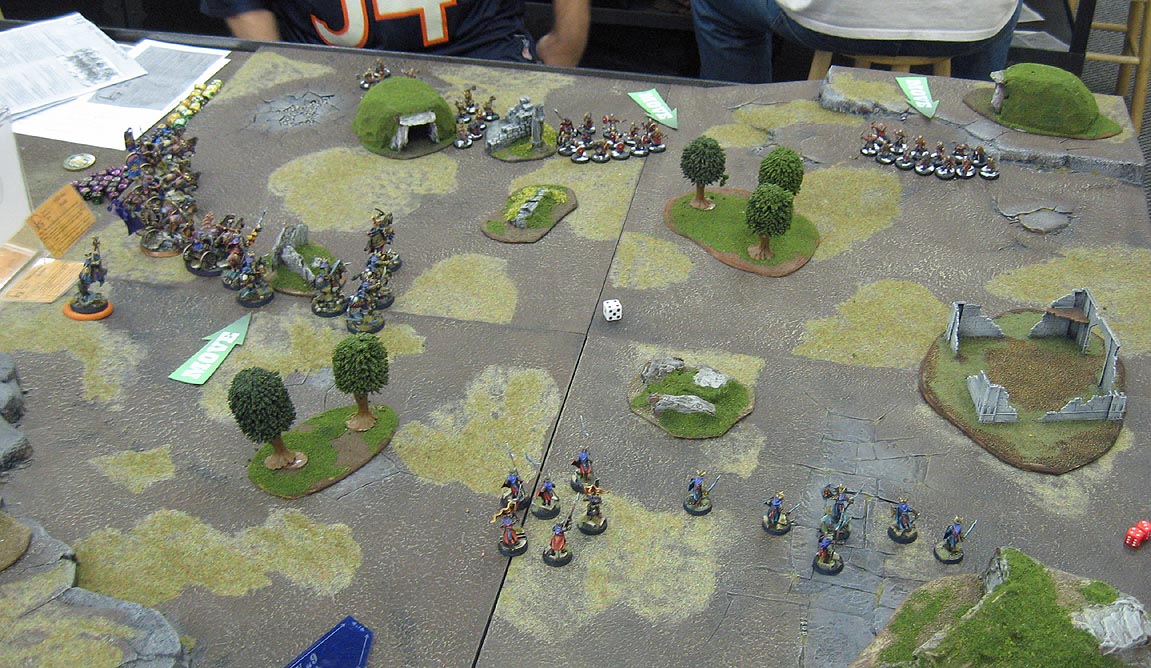 However, I felt really guilty about this, and I decided against that dance move.  That is where the game would go from a prefect storm for me to a complete disaster. 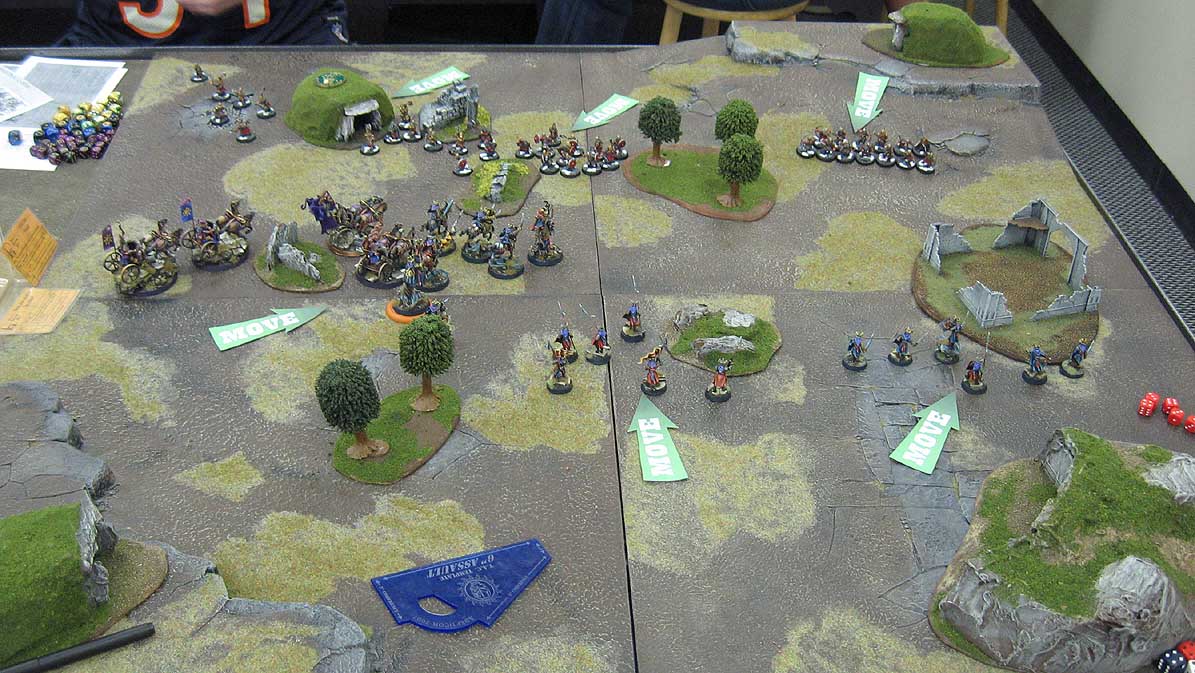 I was able to make a decent charge at the warriors, but flubbed all the rolls.  Yes, I survived all the throwing axes and such, but now I would be really stuck there if I lost priority.  If I won it, I could escape... 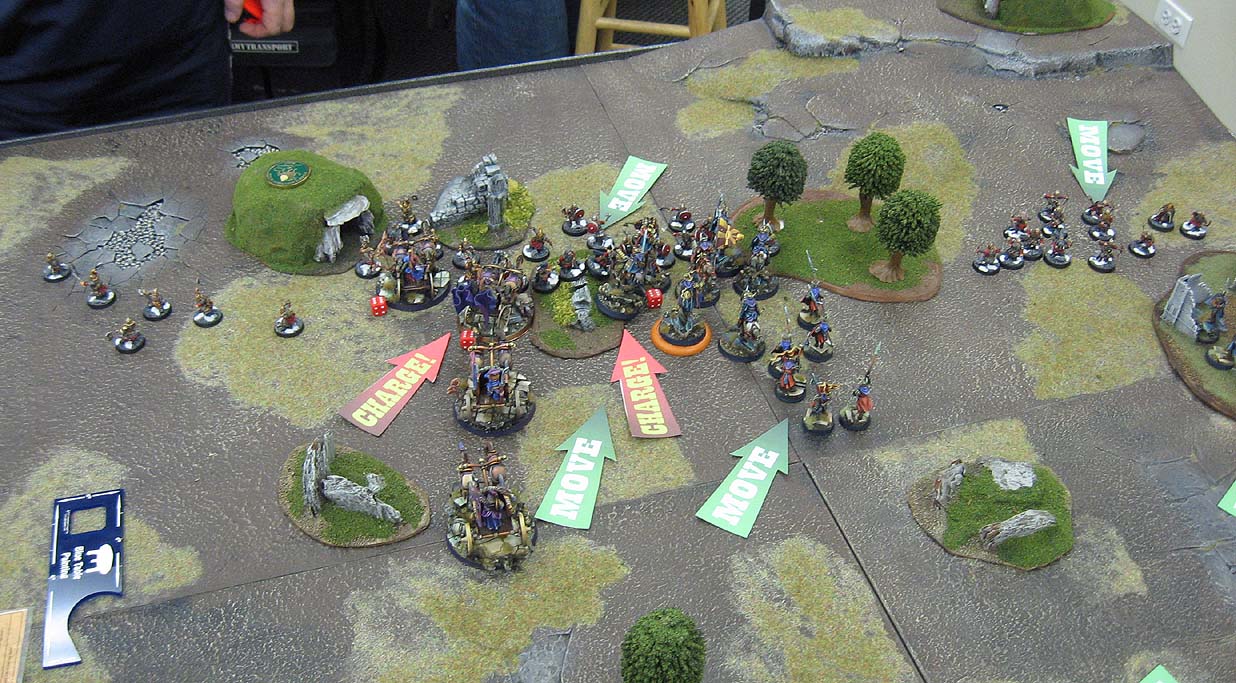 I think you already know how that turned out.  Lose priority, get stuck, etc.  Spend might, lose roll off, etc.  Getting my foot troops all the way down there helped to even things out a bit, while the terrain did keep the Iron Guard and Khazag guys away from me for the time being. 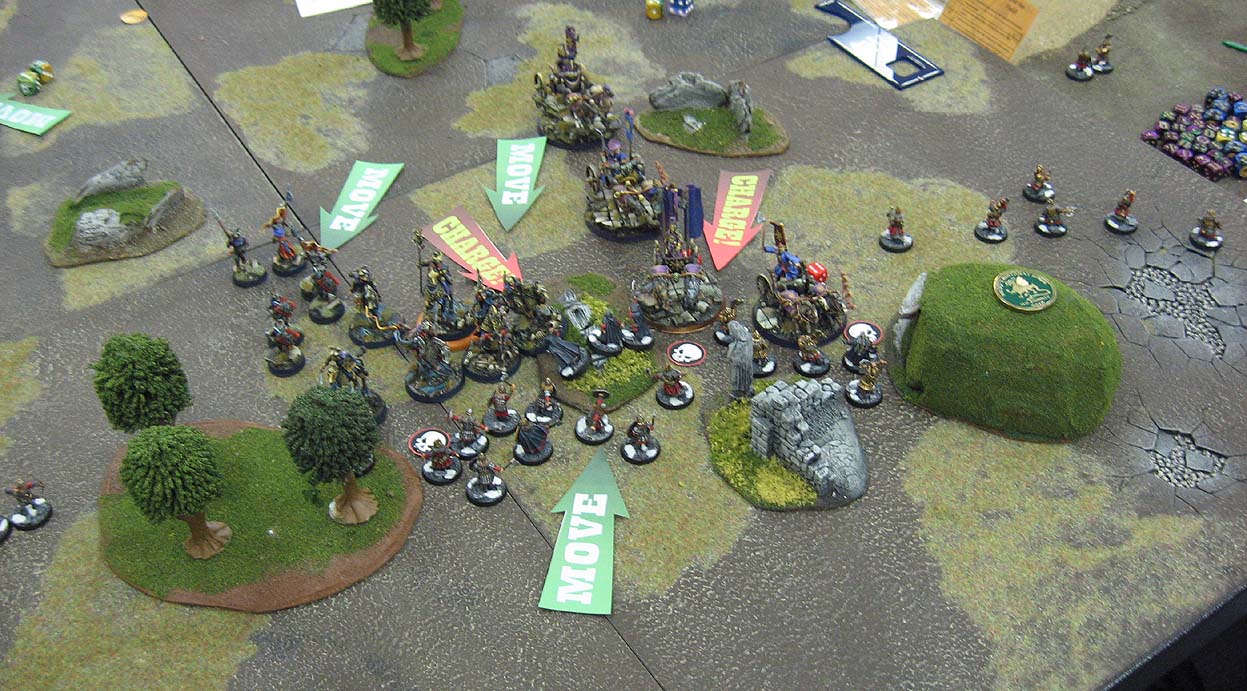 I do manage to get some kills, but I cannot extract myself.  This is bad.  On the far right, my infantry engages the archers as much as possible to prevent shots at the pikemen, and to keep those archers from marching off the board themselves!

I did have a chance, however, to rescue the situation.  Jamie called a heroic combat with Balin and buddies on the chariot you see surrounded.  I knew that he wanted to kill that to get to the king.  Since he had priority, there was no way to avoid it.  However, both characters were fight skill 6. 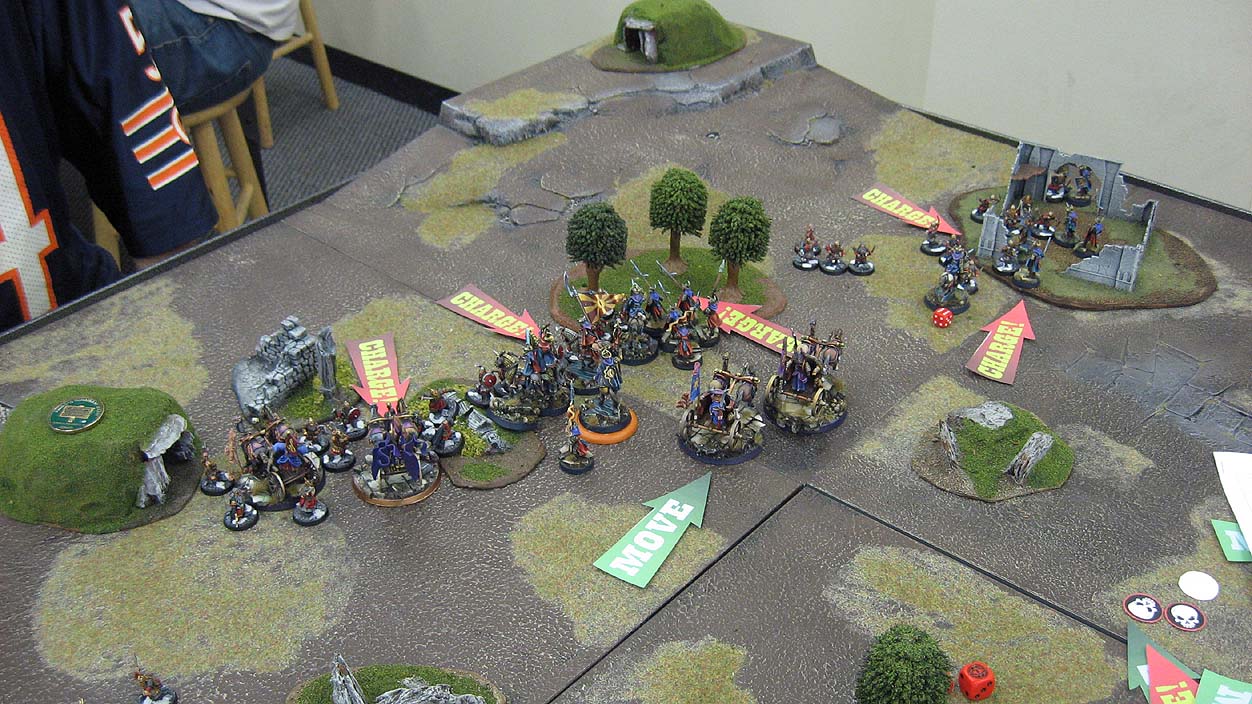 In the inevitable combat, I managed to roll a 6.  I think he used a point of might to make his a 6 as well, which lead to the most important roll off of the game.

If I won that roll, I would probably not do any damage to him, but I would be pushing away all his best combat units well away from the fight, into terrain, etc.  That would be just enough to let me kill off the weaker warriors and get to the finish line, using the war drum.

So, it was all going to some down to a 50/50 roll, which I really hate.   Sadly, it went for the dwarves, and that ended the game.  Neither of us would get anyone off the board, so that +3 for killing the general would be the difference in the game.

I had killed twice as many dwarves as I had lost, but they were nowhere near their break point.  Time expired, and that was it.

As I have said, this scenario is pretty badly designed.  I would have to play it again with the elves, and I was going to take a very different approach.. Stay tuned! 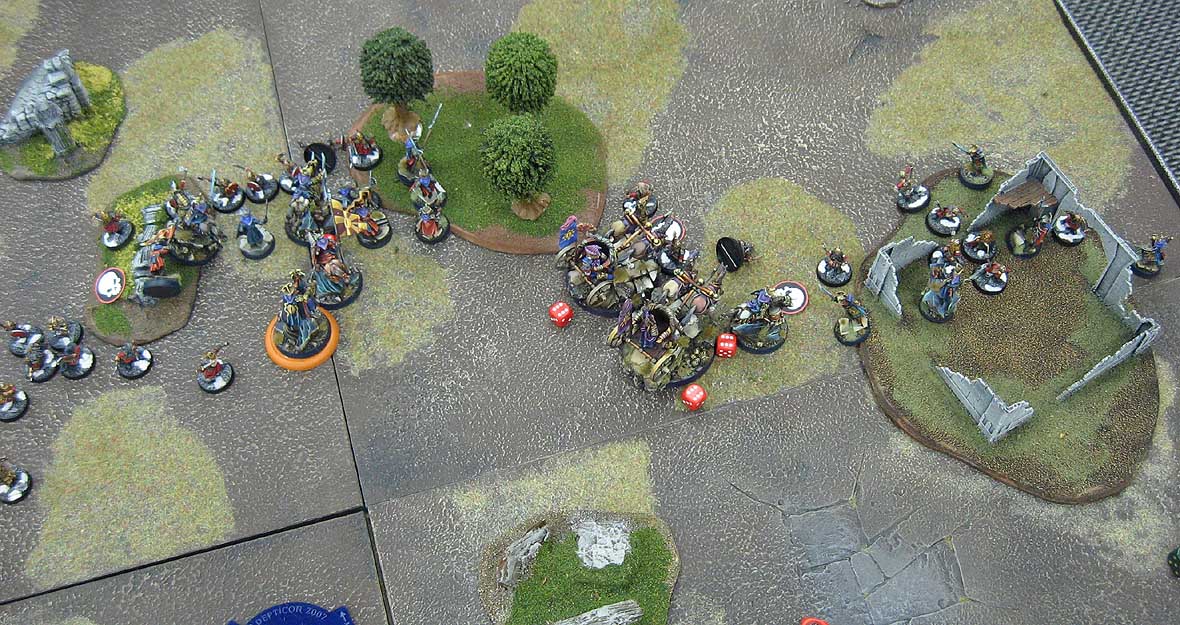 What happens when everything goes right: Revenge of the Elves! 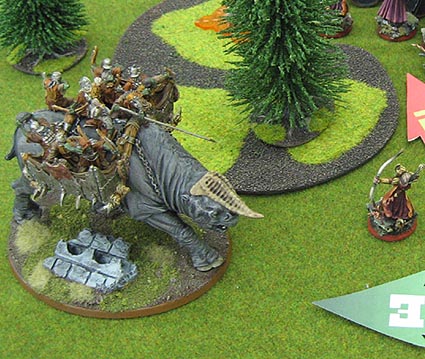 Well, day two of Bilbo's Bash would see me playing 2 games with my Knights of the Blood Rose.  The first match would be against some orcs, lead by Gothmog and sporting the new "mini Mumak" as I call it.

Many things would go the way of the elves here, beginning with the terrain.  It was a reversal of the terrain issues I had the previous two games.  This allowed me to hide both of the stormcallers to protect them from the inevitable sap will spell from the ringwraith. 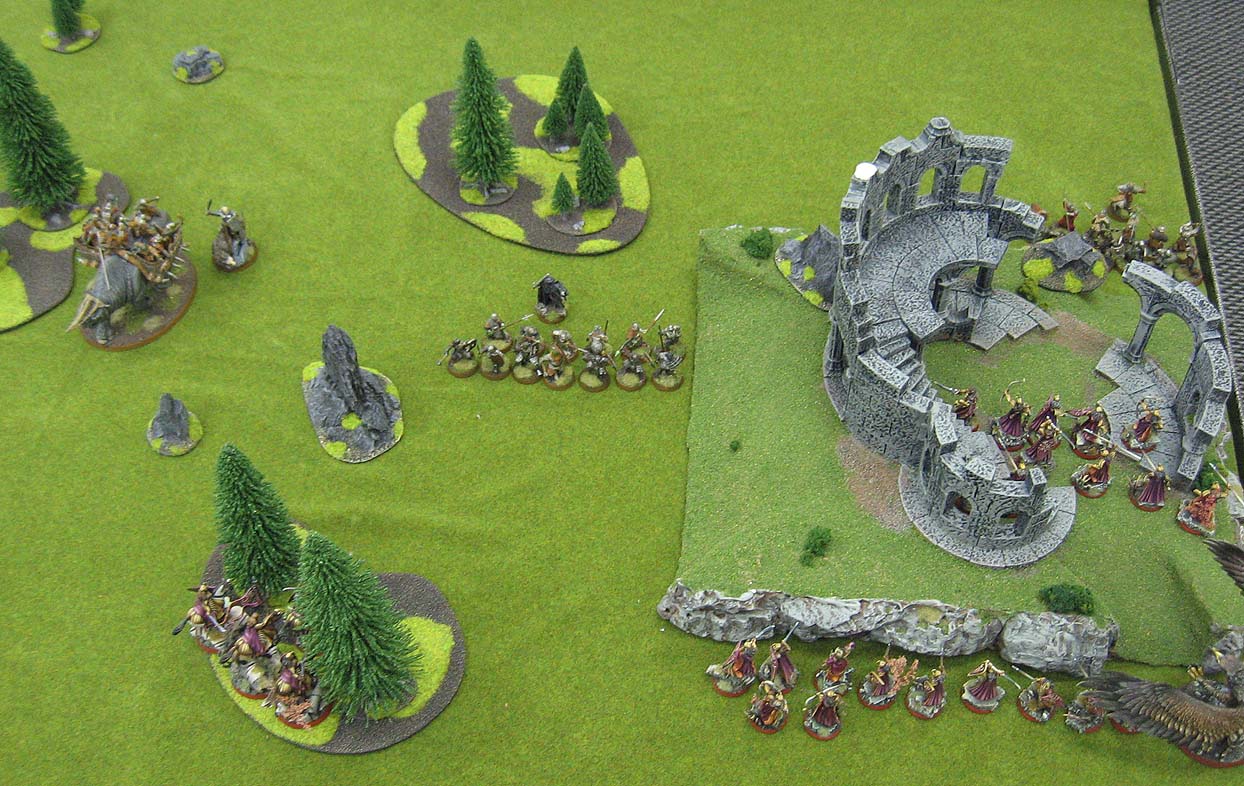 The orcs moved forward, as they often do.  At this stage of the tourney, I was not in a mood to dance around an enemy army.  There is very little defence for sap will, so I was going to use the will while it was there.  If I was fortunate enough to get wild channelling (which had not happened during the first game), then all the better.

As you can see in the image, that is exactly what happened.  I was able to knock down both groups of orcs with Nature's Wrath, which would turn out to set up some serious carnage. 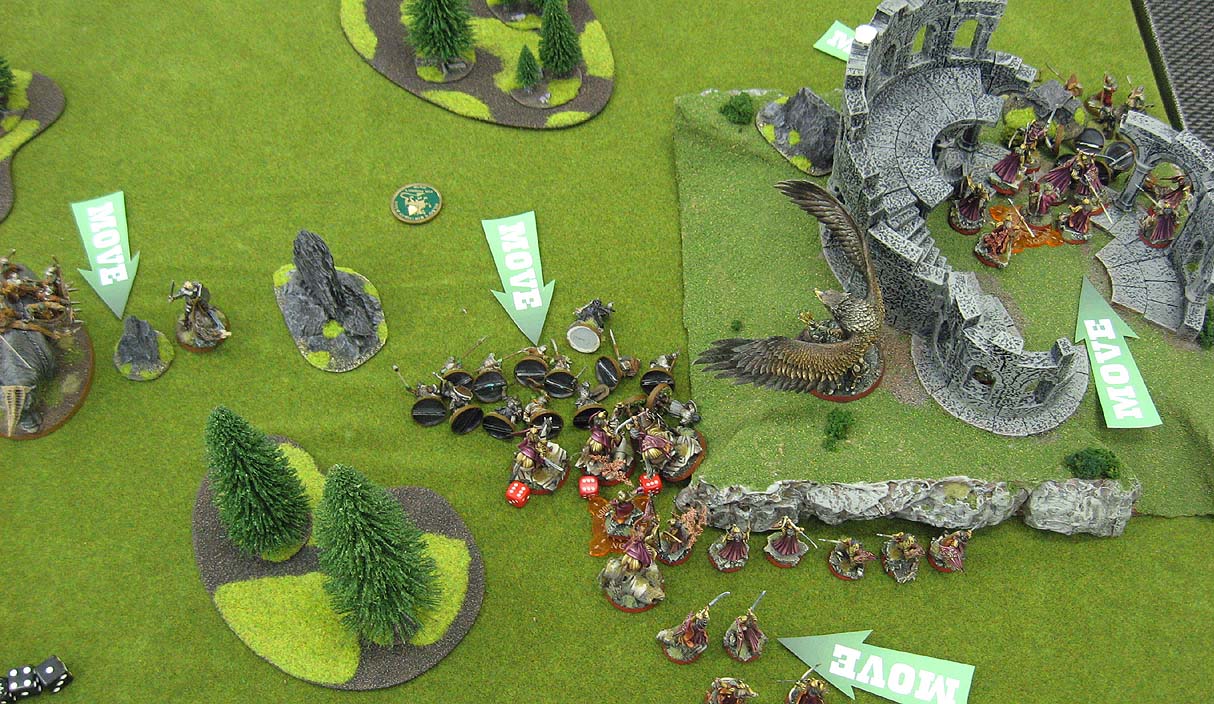 The was the same Lords of Battle scenario from the previous game, which meant that it was all about killing stuff.  Even spent fate points counted towards the overall total.

Once I had them on the ground, my biggest priority was to get that ringwraith.  If I didn't kill it outright, I had to keep it occupied, absorbing will just to stay in combat. 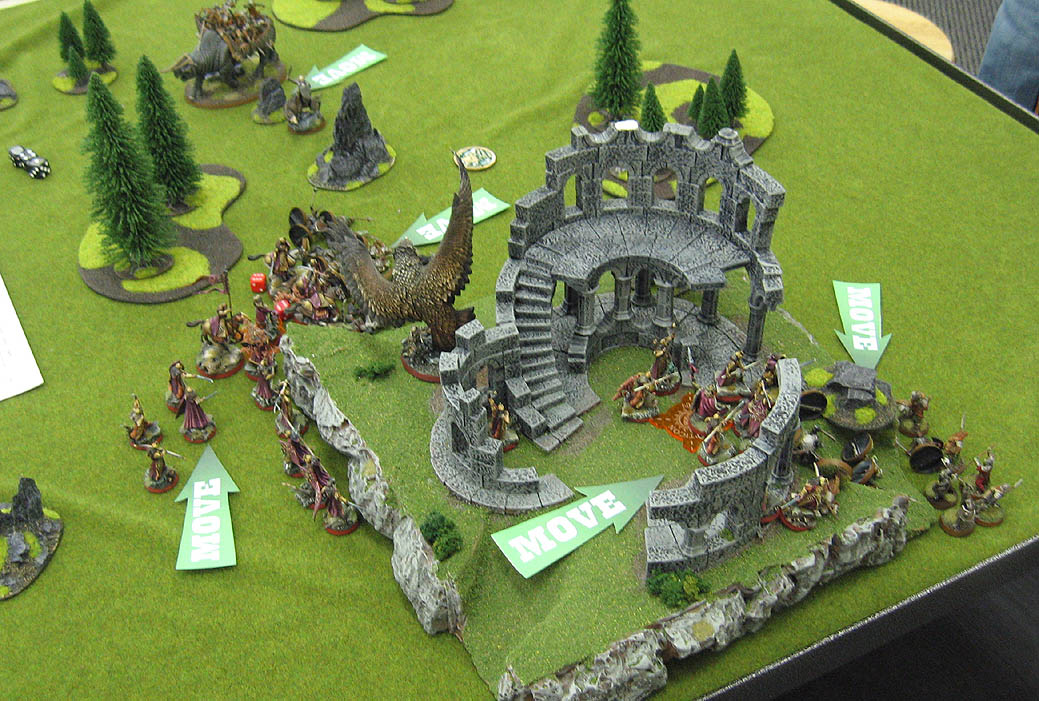 Not only was I fortunate to get the wild channelling, the ringwraith did not resist the spell.  With him on the ground, it would be that much easier to wipe him out.  I was also lucky enough to get priority, which meant that I did not have to spend might near Gothmog.  The last thing I wanted to do was give him free heroic actions! 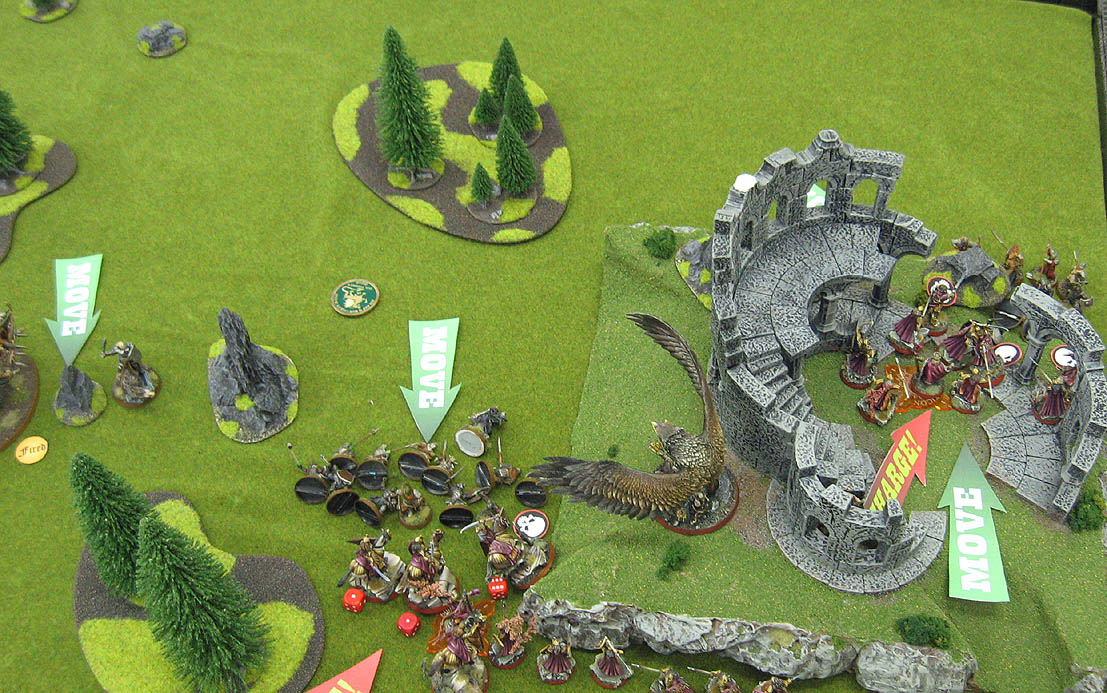 I didn't want to deal with him on the warg, so once I had bashed the downed orcs and killed the ringwraith (way to go Seregond!), I needed to get Delilah near enough to him to knock him off that critter! 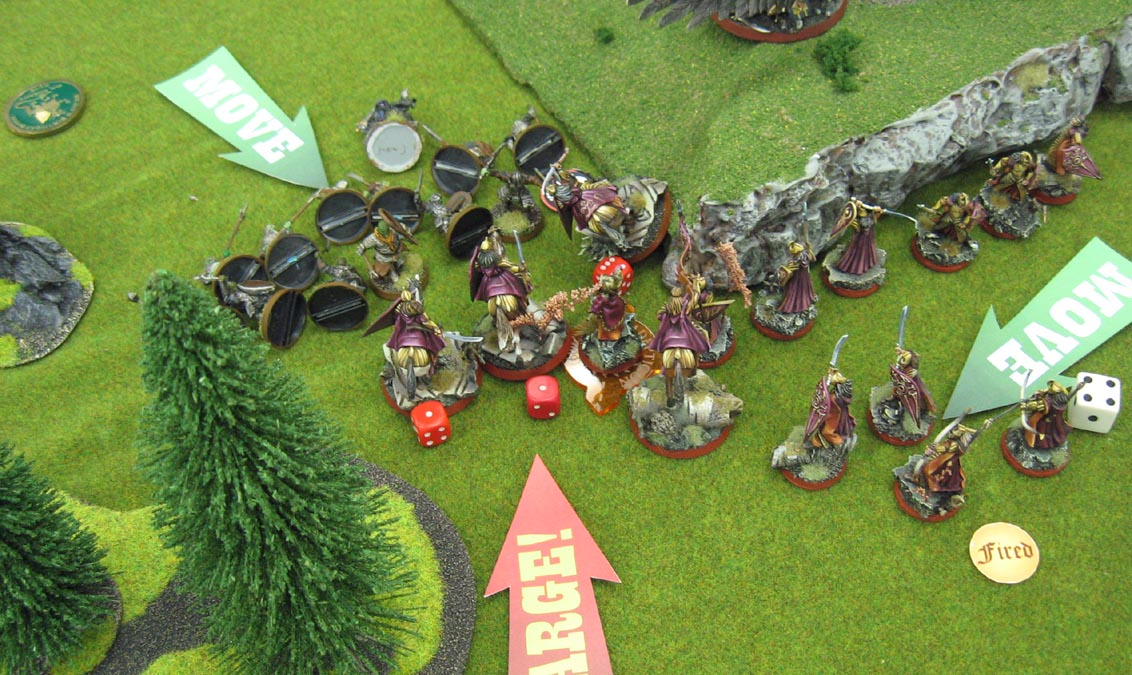 Since I had gotten my will back from the first spell, Delilah had plenty to spend to go after Gothmog.  Once more, she bravely stood out in front of the foul host to issue the Warth of the forest.  Down went Gothmog, and Gwaihir immediately jumped on him. 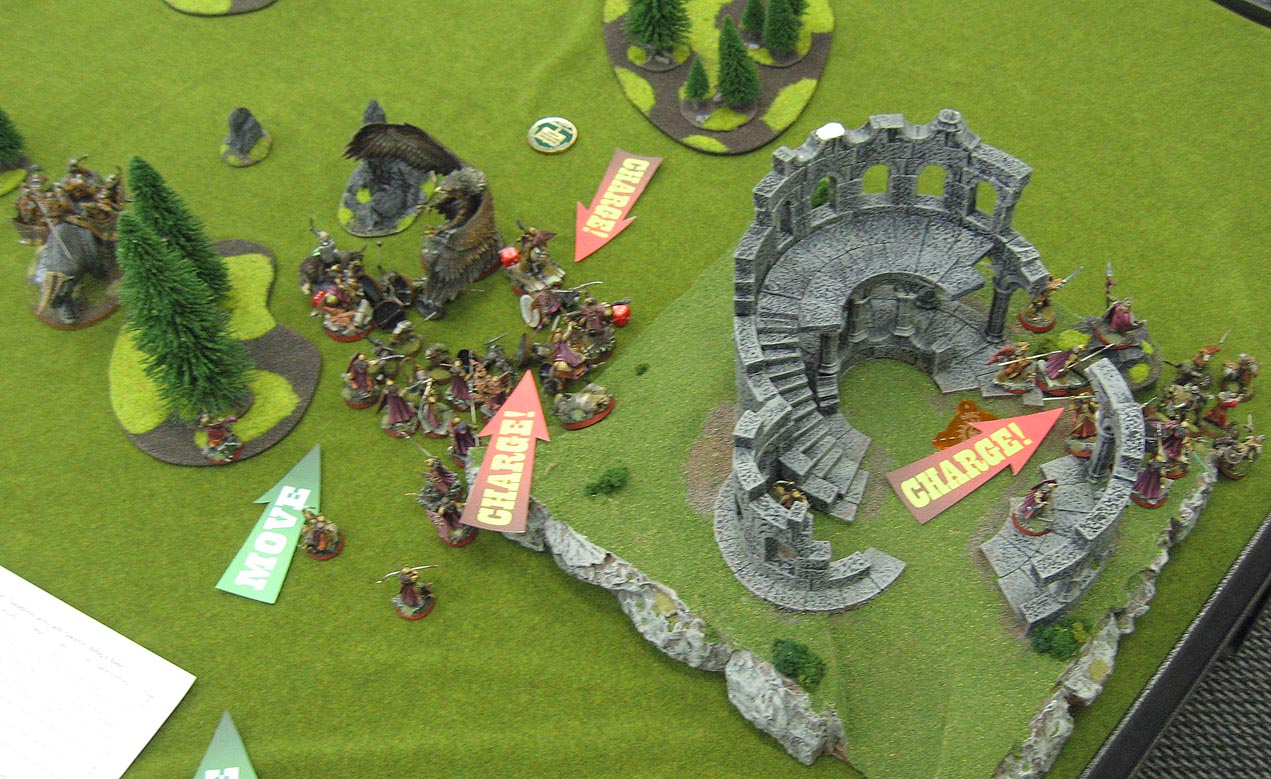 It was looking very bad for the orcs in that center group.  The orcs on the right were a bit stuck on the terrain, as I was.  We mostly traded back and forth lost fights and non kills, with the elves taking down one every so often. 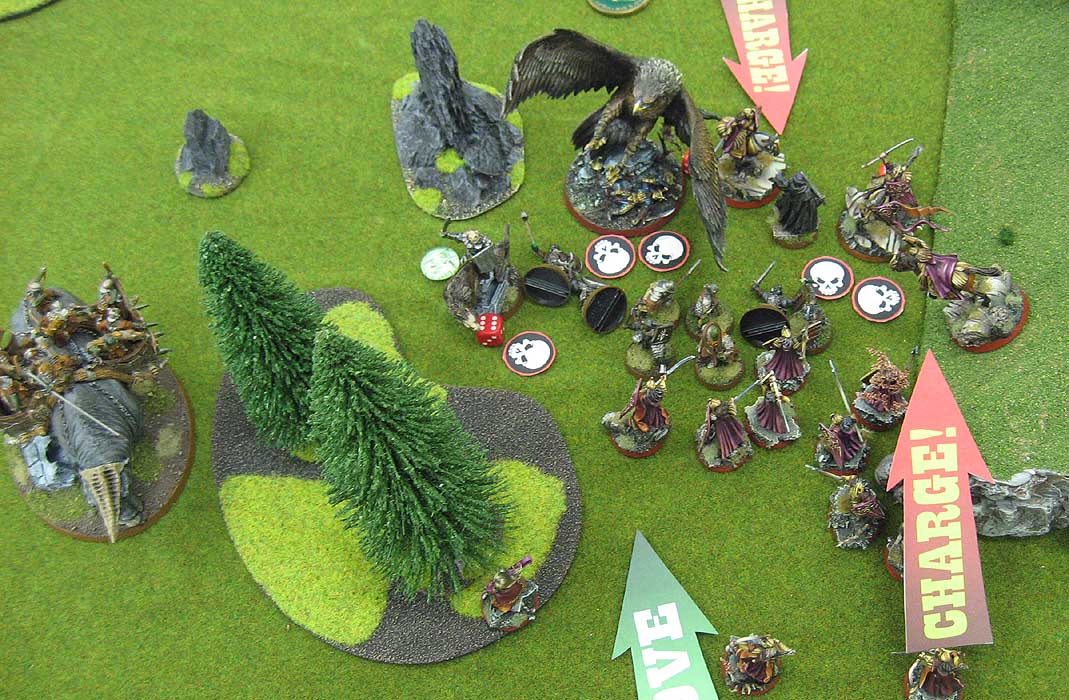 Only 2 or 3 orcs could get up the hill at any one point, so they were always outnumbered at least 2 to 1.  Eventually the fight skill 5 began to take its toll. 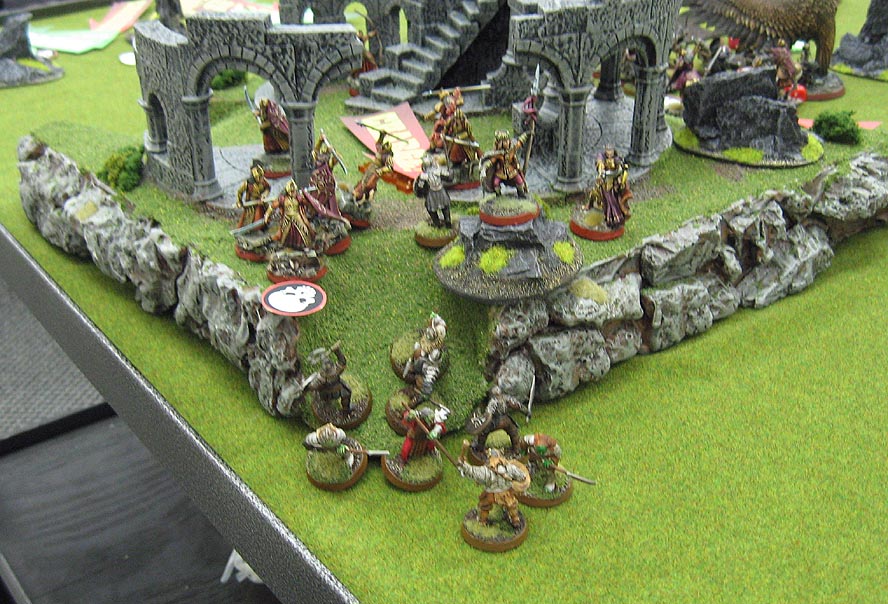 The baby Mumak's orc archers had been shooting at me like crazy, and missing like crazy.  It was rather shocking how bad the dice rolls went for them.  Once particularly brave (or foolish) elf stood in front of that to prevent it from charging into my troops in the center!  Several bow shots from the howdah orcs failed to wound him. 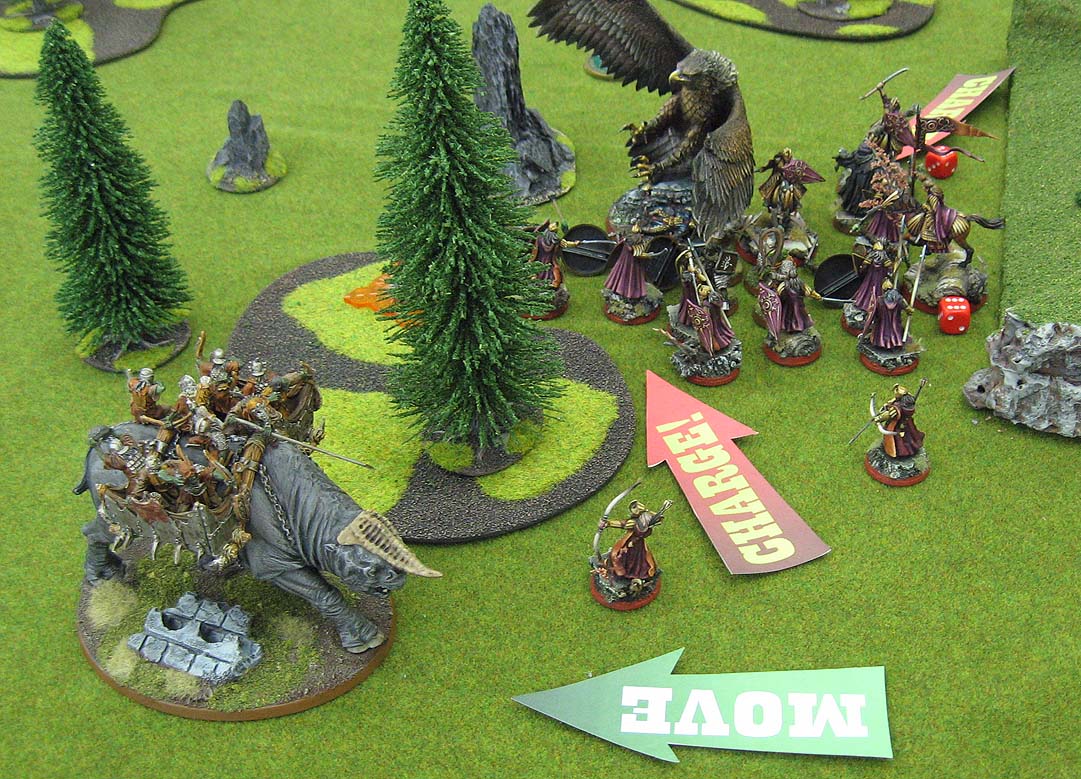 That made a bad situation for the orcs even worse, since the beast would never really get to charge into the elves with any sort of support from the original batch of orcs in the center. 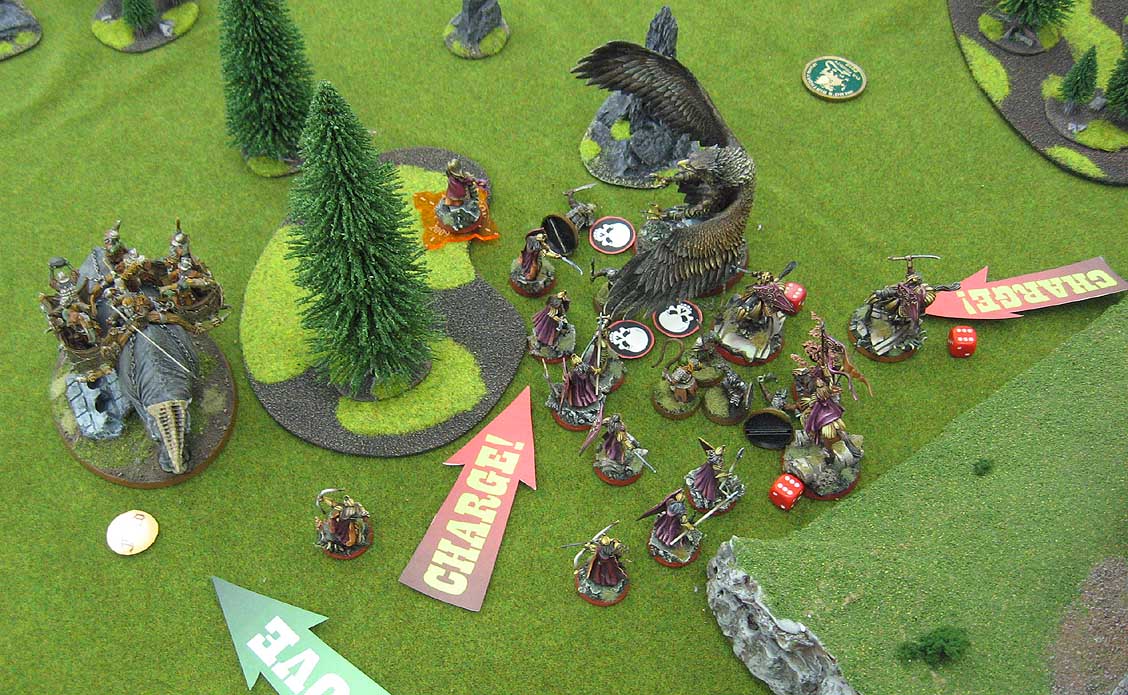 One by one, the orcs by Weathertop are cut down. 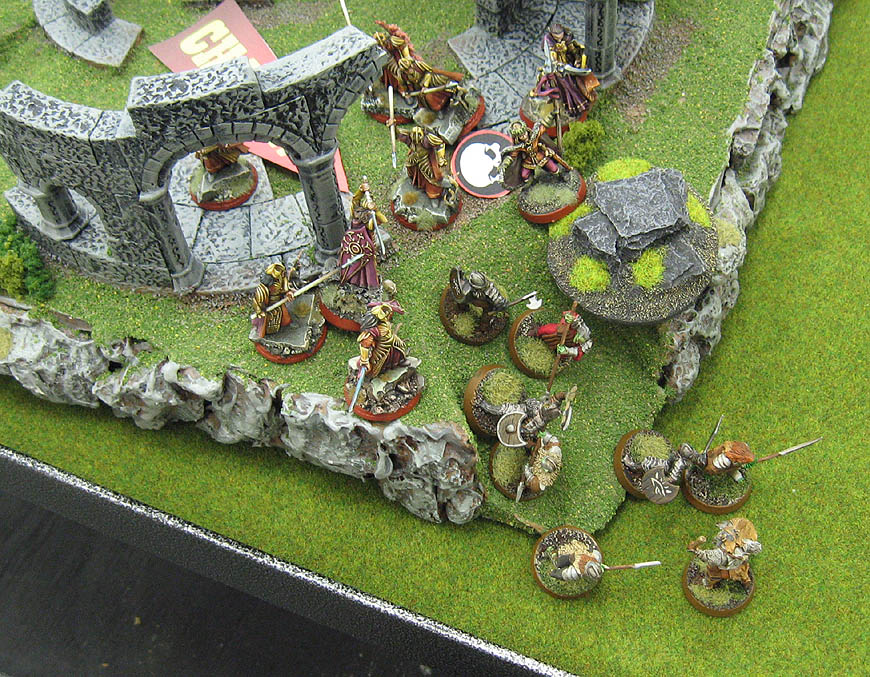 The orcs in the center of the board are nearly wiped out.  All that remains is the taskmaster and one other orc.  The beast does manage to kill off the two elves that had sacrificed themselves to protect their brothers. 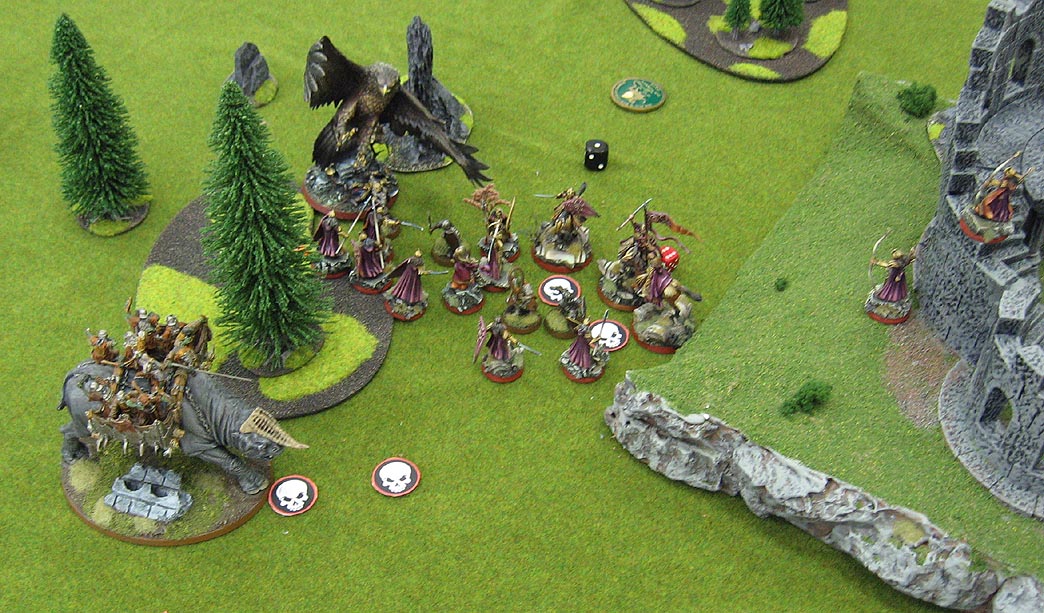 I had hoped to get at the drummer, since the break point had been reached for the orcs.  However, leaving him free to make his courage roll meant that I could rack up some more victory points!  This is where things continued to go my way.

Once an army is broken in this scenario, you roll a D6.  If it is a 1 or 2 , the game ends immediately.  We rolled at least 4 straight sixes, keeping the game going unbelievably long!  This would let me press every advantage which I had with my numbers and positioning. 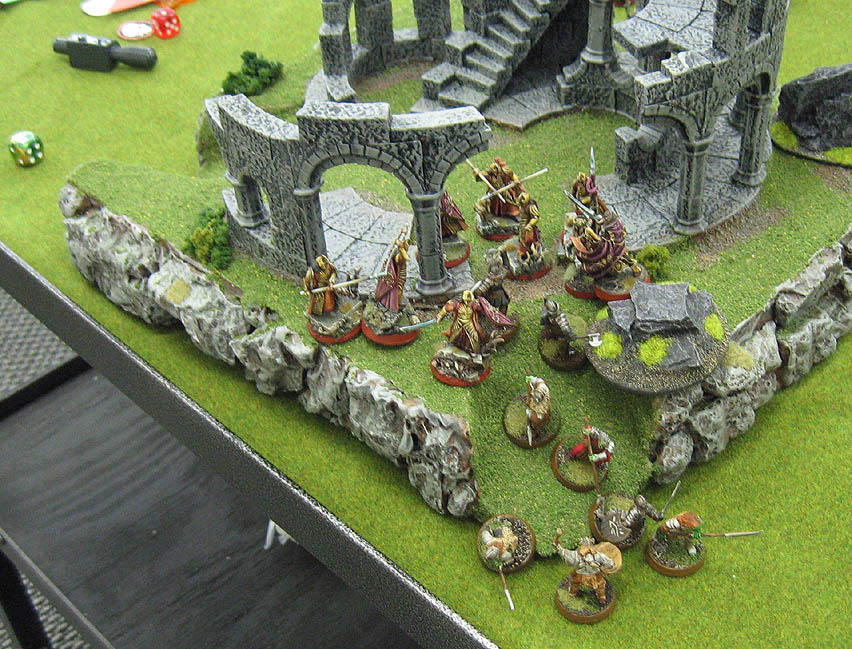 I am still trying to kill off the last remaining orc infantry.  If I can do this, I can go after the beast, which had been wounded a few times by lucky bow shots. 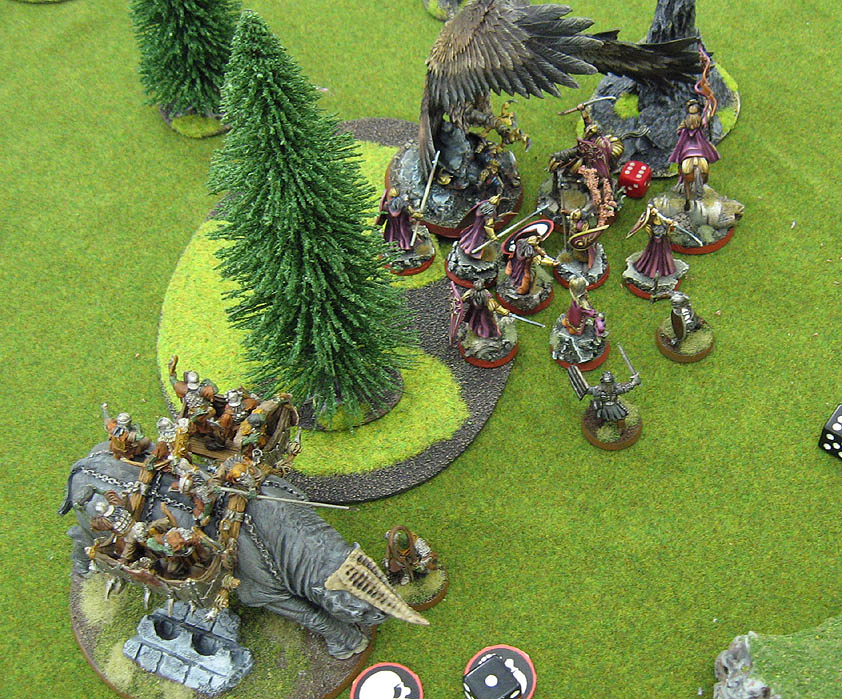 Eventually I do charge the beast, making all the courage rolls needed to surround it with everything I had.  The fight skill 8 of Gwaihir (and his strength), would spell the death of the beast.

In the end, it was 32 to 10 in the casualty count for the elves!  Wow.  I had even been able to get one Knight all the way to the orc side of the board for the five bonus points, thanks to the 4-5 extra turns.

Again, everything possible went my way here.  A welcome change from the previous day.  Would this use up all my good luck?  We shall see as the worshipers of Sauron face stubby legged dwarves.  Again. 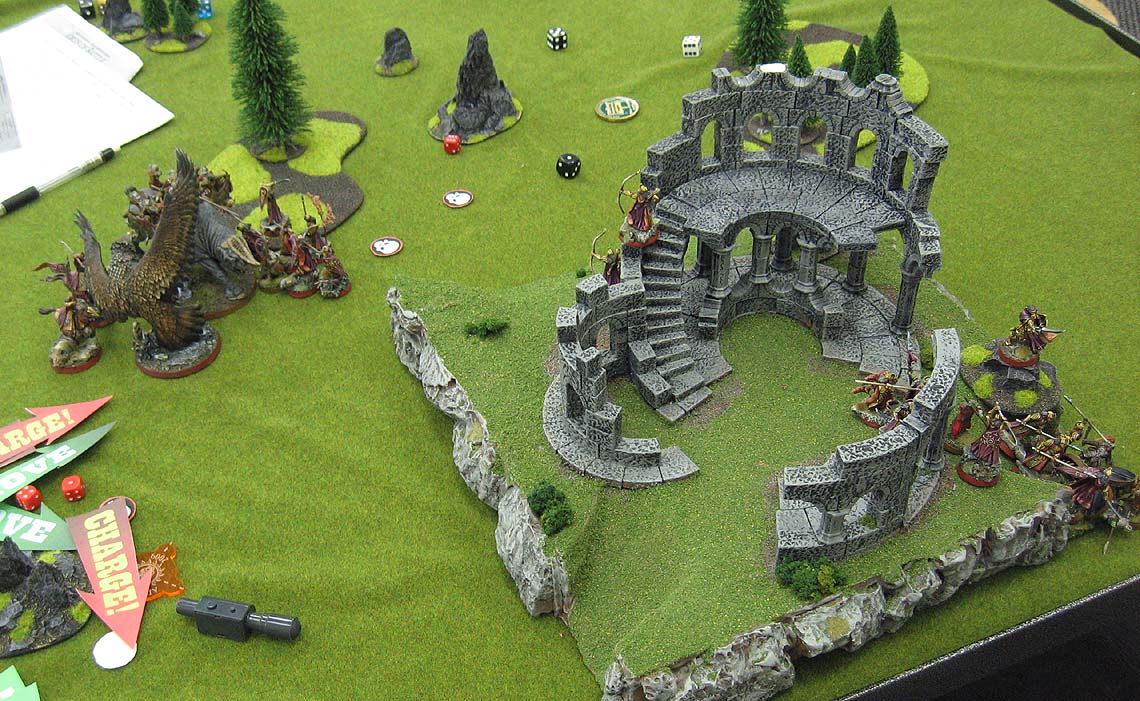