Release the hounds!  Well... that would be later.

The struggle would begin with Wyatt and Virgil, flanked by Deputy Doogan on his interceptor.  A member of the Dark Council decided to get a very close look at the situation, and follow the Lawmen heroes towards their goal!

As I mentioned last time, the RJ-1027 power generator was a major objective in the fight.  It was one of three objectives.  The generator was worth two points, as was the pile of RJ-1027 containers in the southwest corner of the town.

The third objective was the wagon, which was worth a variable amount of points.  We thought it would be more interesting if it was actually moving around town, in a manner similar to regular civilians.

So, in effect, it was careening wildly through the streets of Wappelville, as the driver had been killed in the crossfire!  Nobody knew where it might go next.

It was worth 4 points if you managed to get control of it, two points if you were simply "along for the ride" in the back of the wagon, and even negative points should it be destroyed!  More on that later. 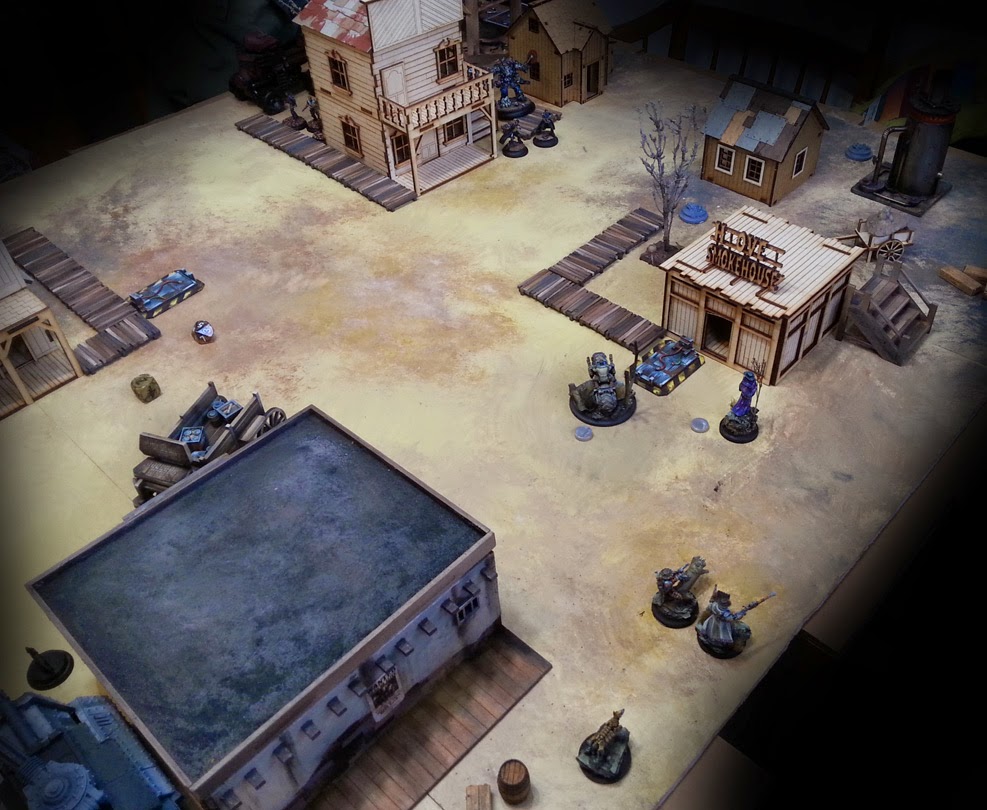 The Enlightened obviously planned to make a dramatic push towards the pile of containers to the southwest, and possibly control the center of town to cover the wagon as well.

However, an early shot from the Judgement's rail gun took down a few of the hideous constructs of Dr. Carpathian, who was holed up in Miss Fannie's establishment. 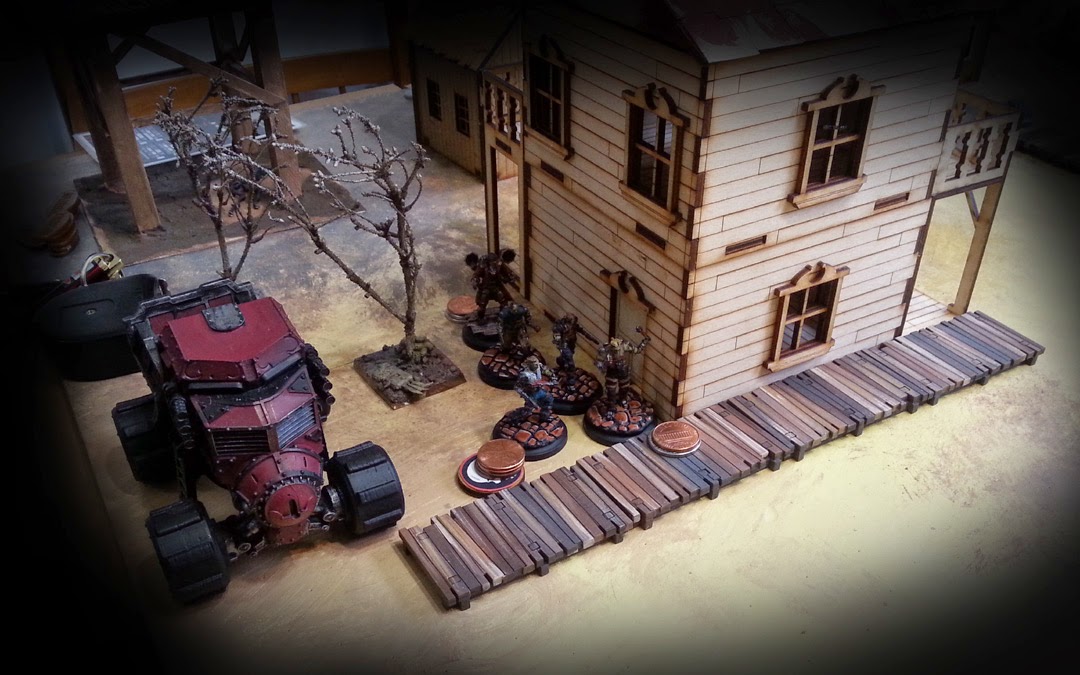 The unstable constructs began to ignite as the rail gun blasted its way through the putrid flesh and metal... 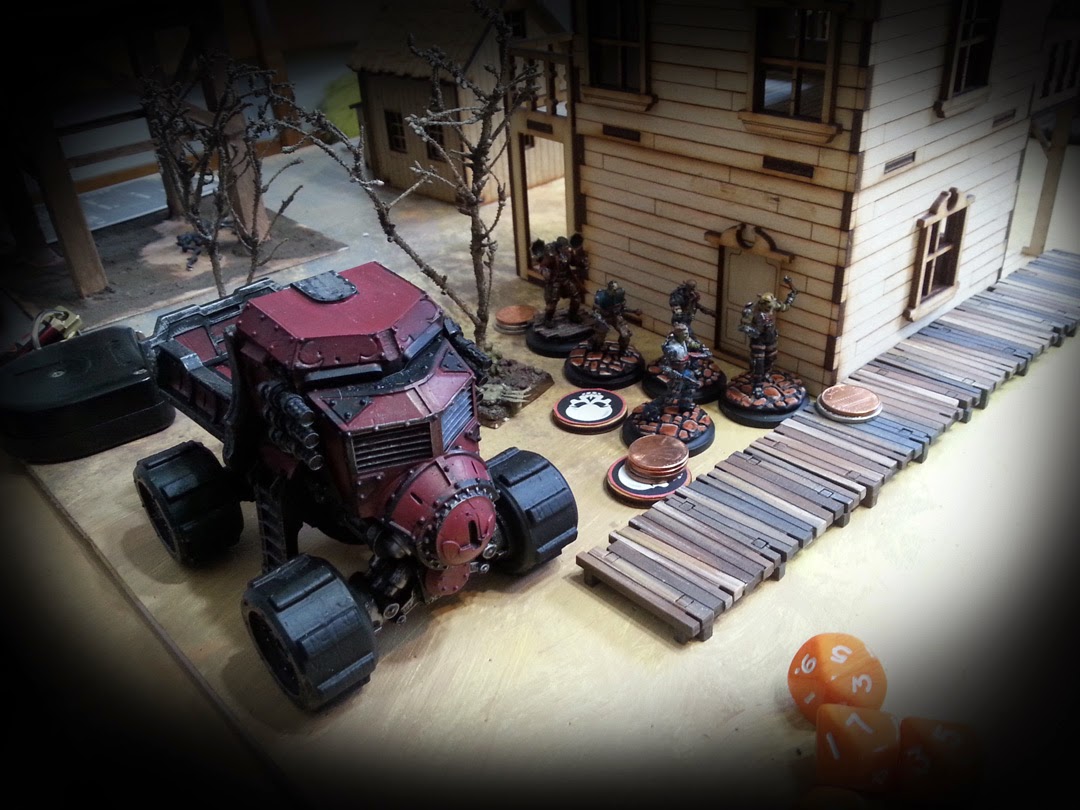 Missy Copelie had instructed Hercules, her trusty K-9 companion, to go after Edison, the young inventor who had been corrupted by Carpathian's madness.

While on his way towards Edison, he attempted to leap through the window to take a bit out of Carpathian!  Brave Hercules!!

Unfortunately, Edison was nearby, and came to the aid of his master.  He used his sonic weapon to push Hercules away from Carpathian. 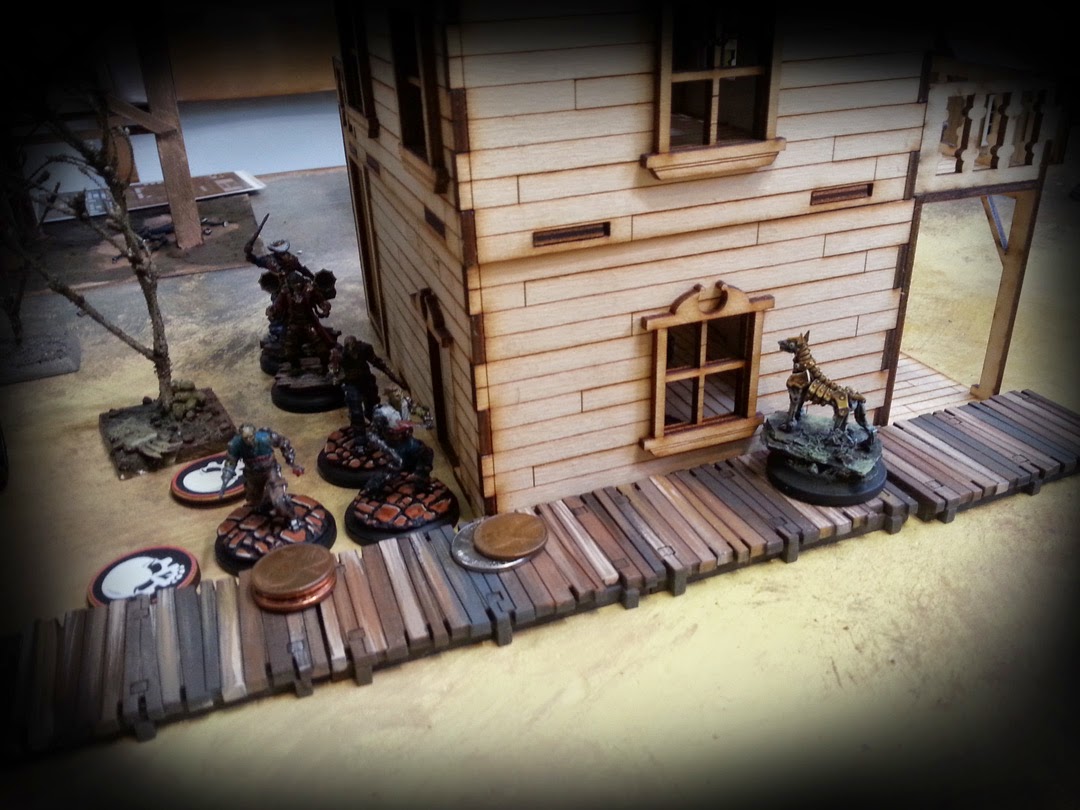 Karl Fredrickson had been inside the jail at the start of the battle.  Once he saw the wagon head directly towards the front door, he decided to make an attempt to jump onto the wagon!!  A Dark Council member was nearby, so he felt confident that he would get a second chance to take control of it.

Alas, he was unable to catch up to the wagon, which turned around and headed back to the center of the intersection.  Clearly, the Dark Council had other plans.

Karl was now left covered in nothing but dirt, out in the open! 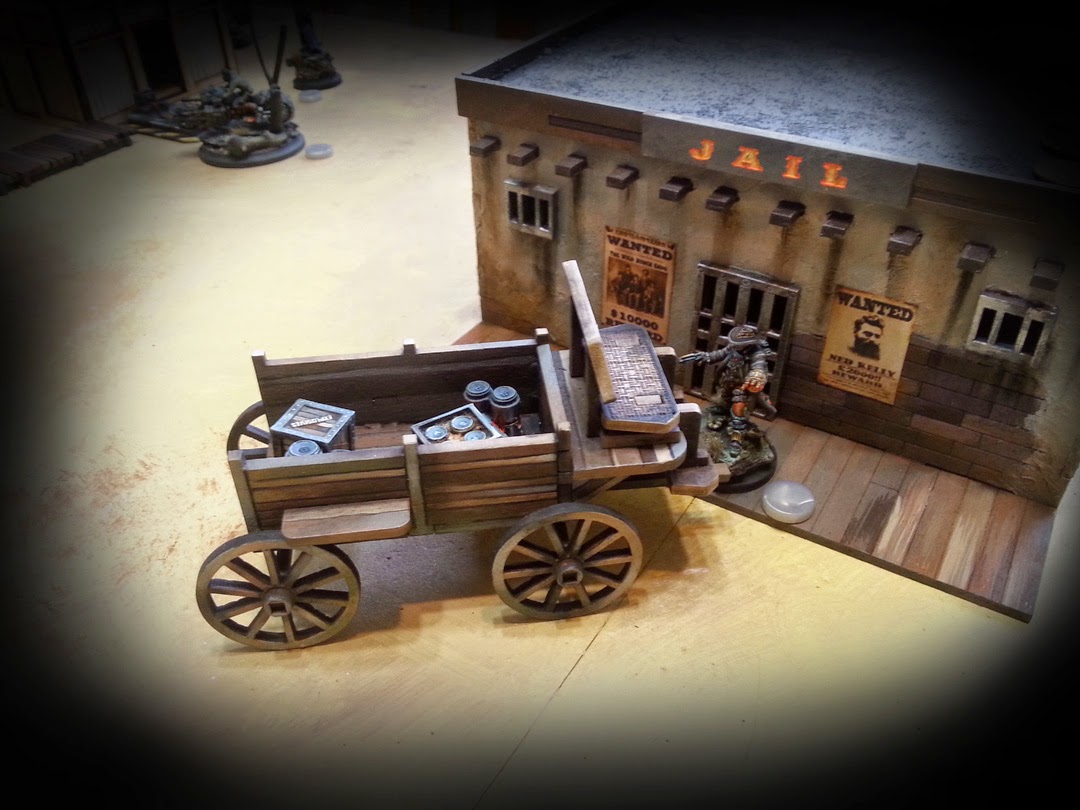 Edison also used his sonic weapon to push some constructs toward that pile of containers, right past Hercules.  He would pay a very steep price for this action as you will see soon...

As an aside, we were able to figure out how to get six constructs to fit inside the template but still keeping enough space between them to avoid a cascade of self destructive explosions! 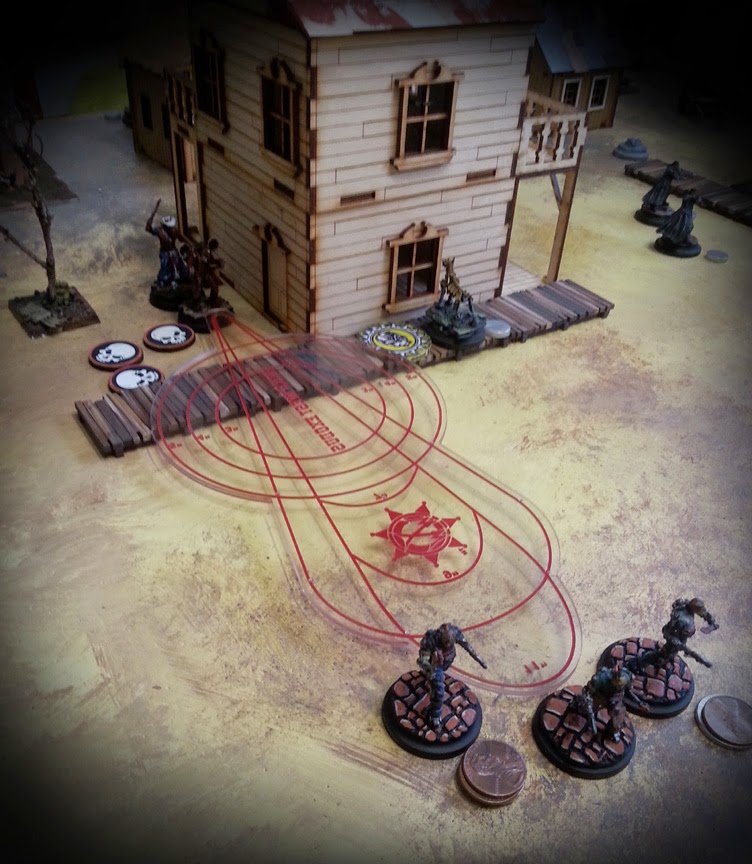 With Hercules cast aside, the Kaufmann brothers of the Enlightened used their vast quickness and agility to leap onto the wagon and take control of  it!!

This was a disastrous development for the Lawmen, as the Enlightened could now move the wagon well into the protective zone created by Carpathian and Vlad, who were using Miss Fannie's establishment as a sniper nest. 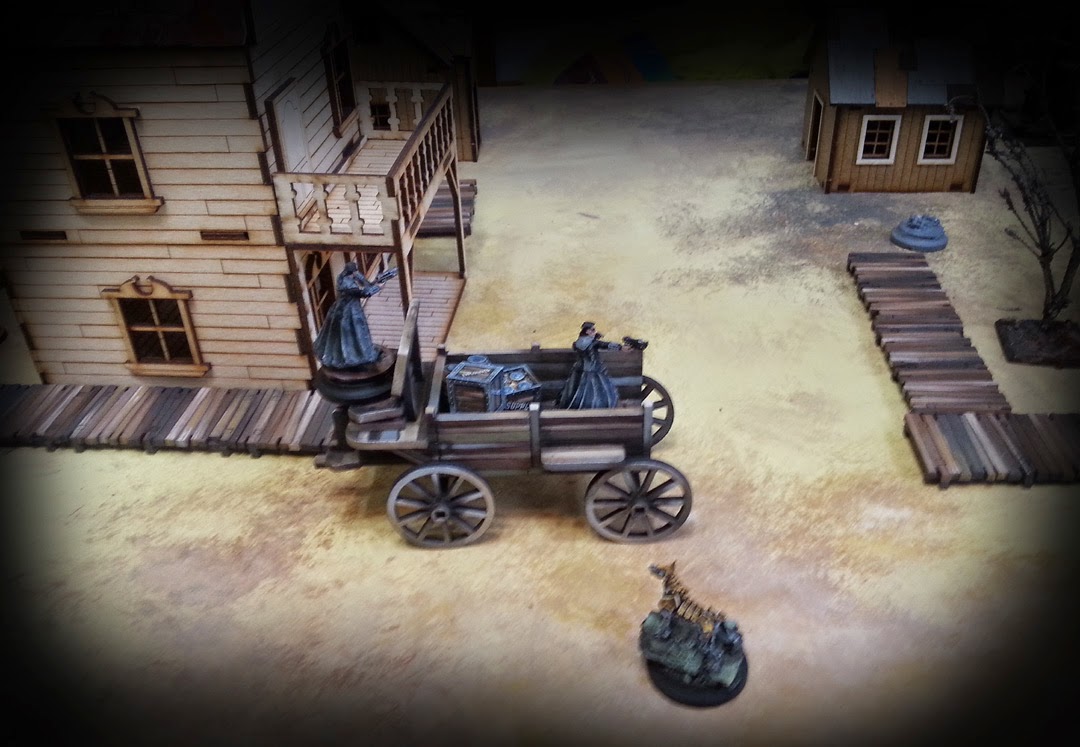 Speaking of Enlightened underbosses and sidekicks... Hercules was able to work his way around the wagon and hurl himself upon Edison!  The young inventor was no match for the ferocious mechanized beast, who tore him to shreds.

Should Missy's pet survive the inevitable counter-attack by Long Tree, he might be the last hope of the Lawmen to wrest control of the wagon... 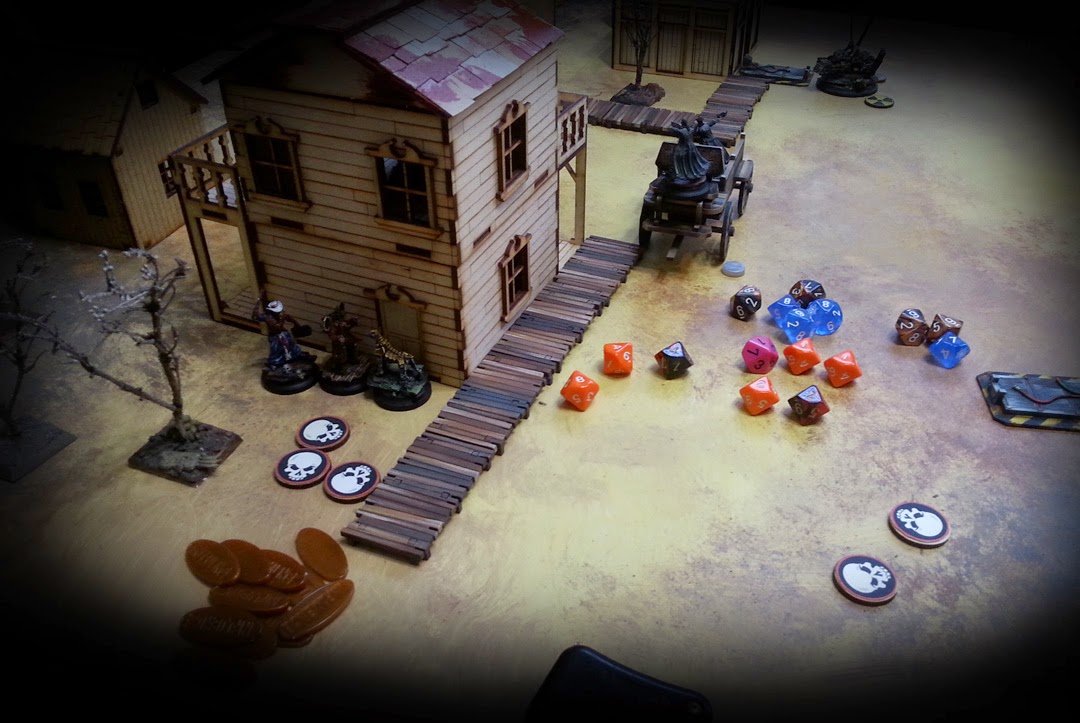 Sadly, the valiant Hercules was slain by Long Tree, who would continue on and join the constructs marching towards the pile of RJ-1027 containers.

Even though Wyatt and his brother had secured the power station, control of the wagon and its cargo spelled doom for Wappelville.  Only one Lawman was capable to preventing this horror... Fredrickson!! He used his power gauntlet to teleport himself directly onto the wagon!  A suicidal mission, to be sure.  With the guidance of the Council member, he managed to appear directly in the midst of the dangerous Kaufmann Brothers!! 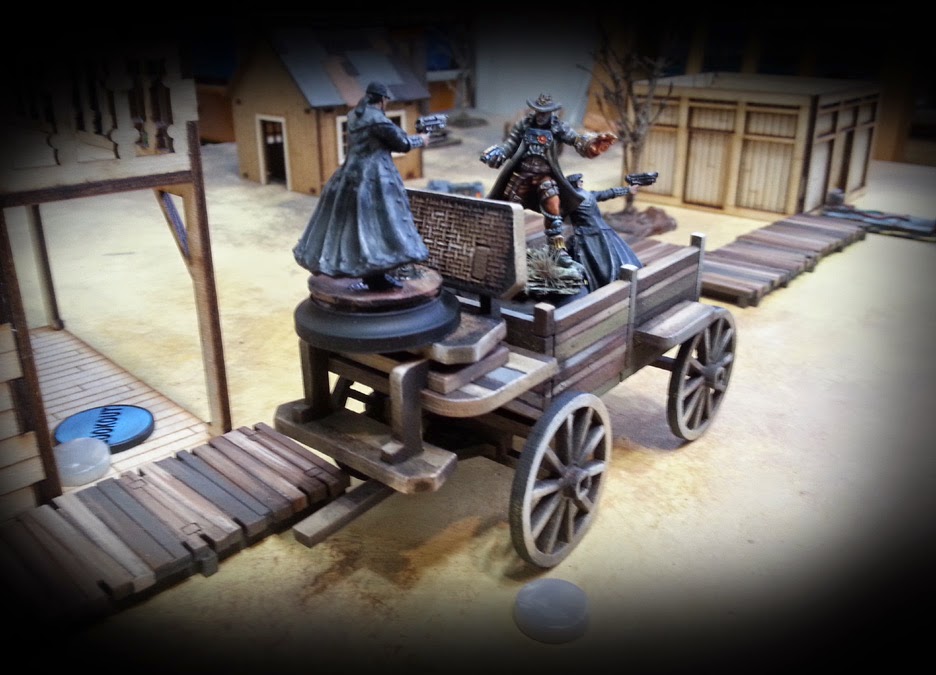 To the southwest, the struggle for the pile of containers would intensify as the Enlightened would bring as much force as possible to that far corner of town.

It was here that Missy and Rebecca would shine, potentially saving the day for the citizens of Wappelville.

How many Lawmen would be sacrificed in the prevention of Dr. Carpathian's evil plans?  Find out in the next episode!!! 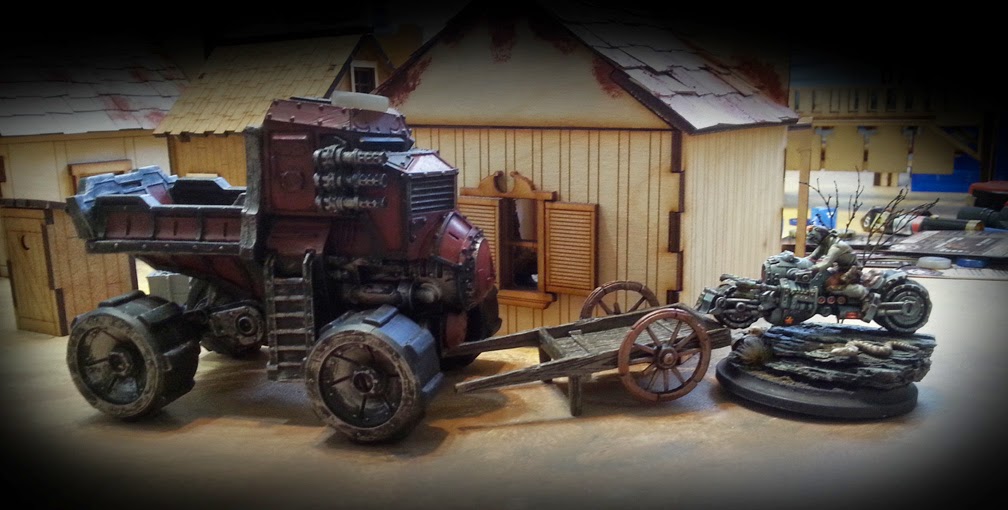 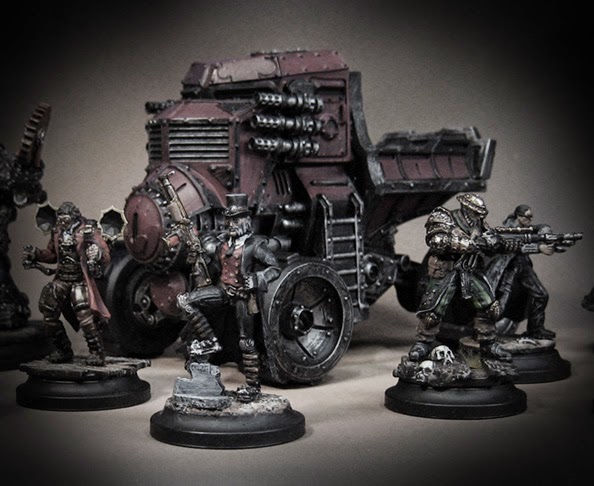 For all the angst (and violence) the Lawmen have caused in the burgeoning town of Wappelville, the citizenry would now see their oppressors as saviors.

News that the dastardly Dr. Carpathian was making his way towards the town in pursuit of RJ-1027 and the "raw materials" for his hideous new "creations" had the residents in a growing panic. 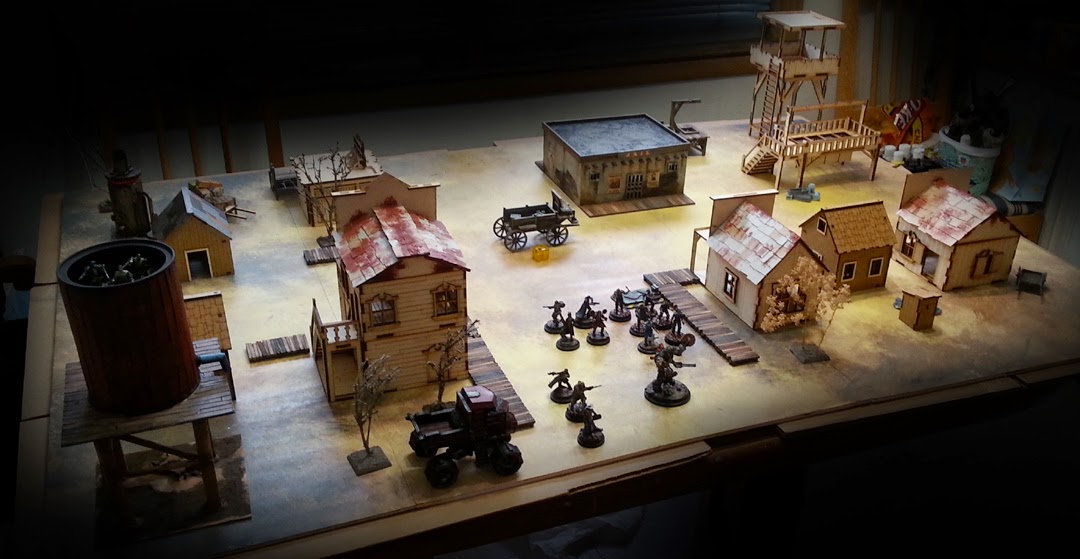 With the constant fighting between Jesse's Girls and the Lawmen, the ample supply of fresh corpses was just what the Doctor ordered!  Freshly dug graves littered the landscape outside of town, as well as the "Repository", where those who had been hanged at the Grand Gallows were disposed of. 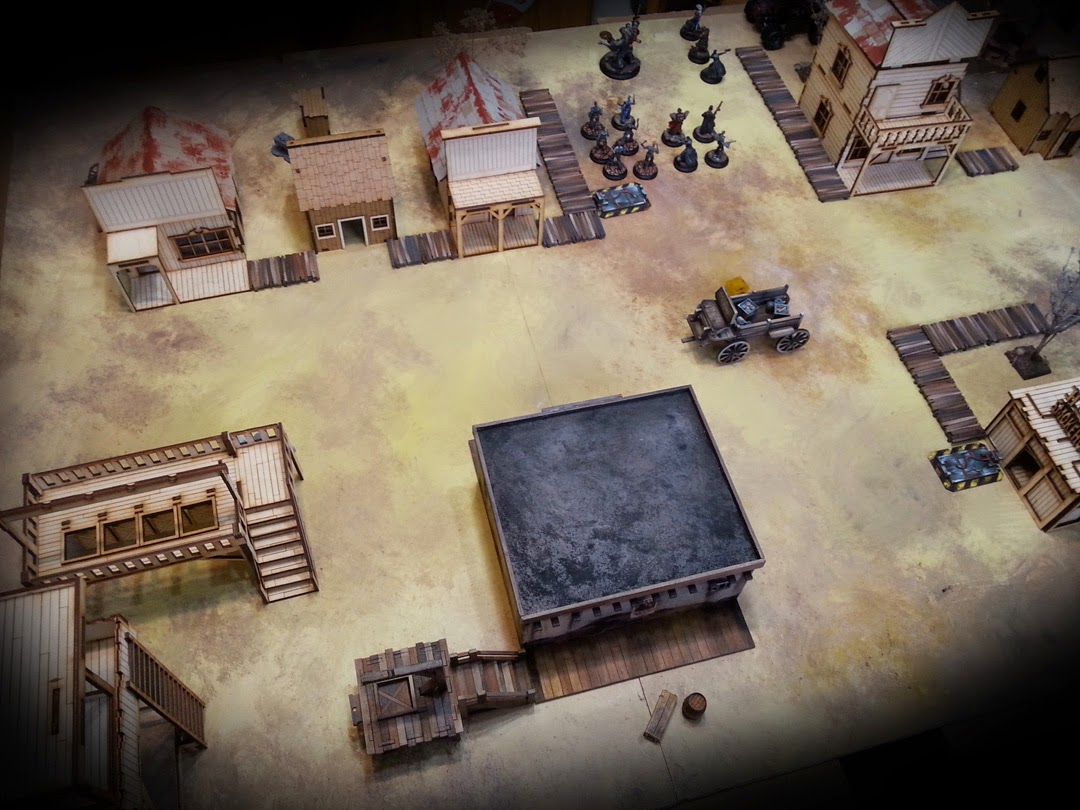 Along with the rising body count, more and more shipments of RJ-1027 had been arriving in town.  Dr. Carpathian and his Enlightened had been selling this throughout the area, but were now in need of the substance to power the new animations which would be gleaned from the dead. 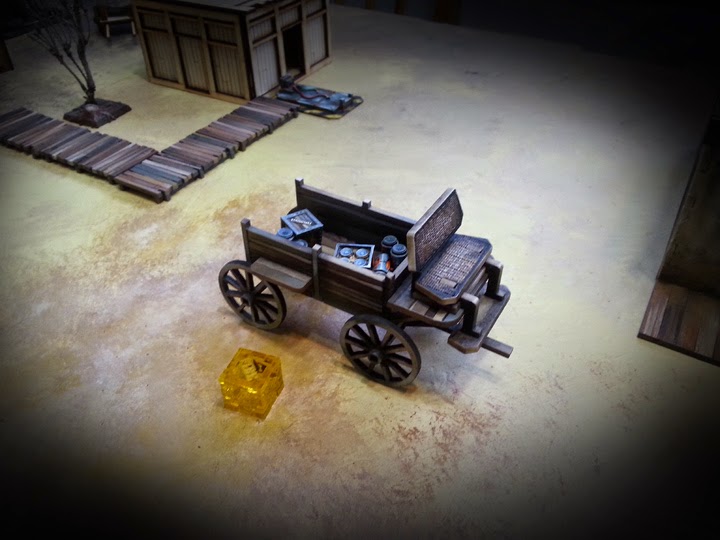 Here we see the dreaded, stinking hordes of Dr. Carpathian.  Constructs of all types and sizes shamble alongside his underbosses and sidekicks.

These by the way, were painted by Rich, who was getting a chance to try out his brand new posse for the first time!  Very cool!  Nice work Rich... 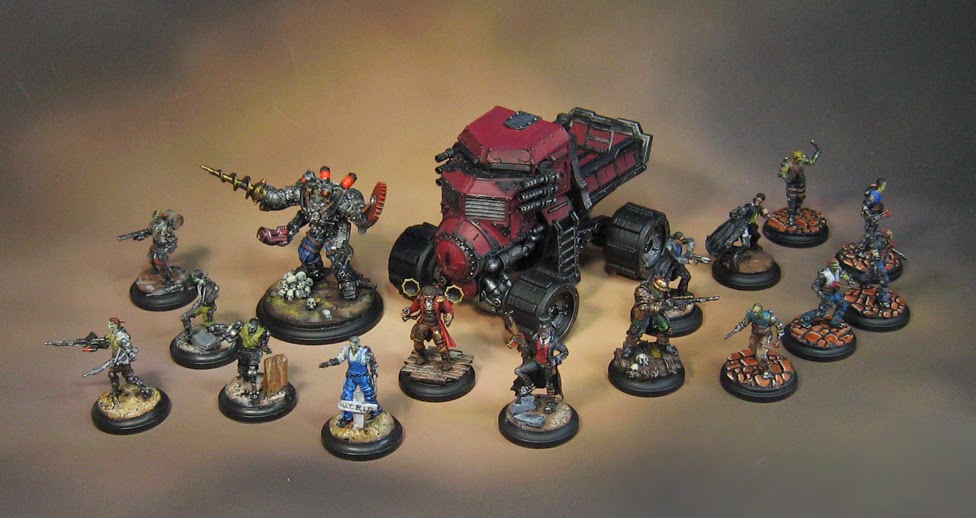 The Doctor is in.  He and his fearsome band of augmented life forms and the unliving would present the greatest challenge yet to the Lawmen of Wappelville. 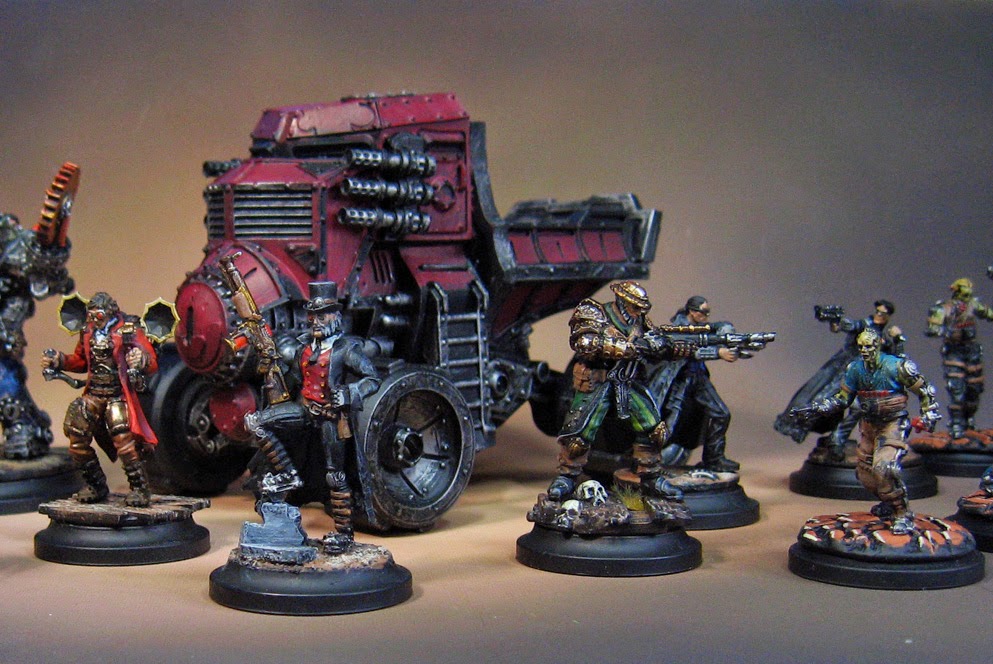 For this onslaught, the Wyatt Earp brought in several new weapons, including the Copelie sisters (and their K-9 robot attack dogs), Carl Fredrickson, the massive Judgement heavy support, and some Interceptors.

Also appearing on the side of the Lawmen for the first time would be the Dark Council.  One of their members had observed the officers of the Law closely during his brief association with the Outlaws... once they had been driven out of town, he reported that the Lawmen could benefit far more from their watchful gaze. 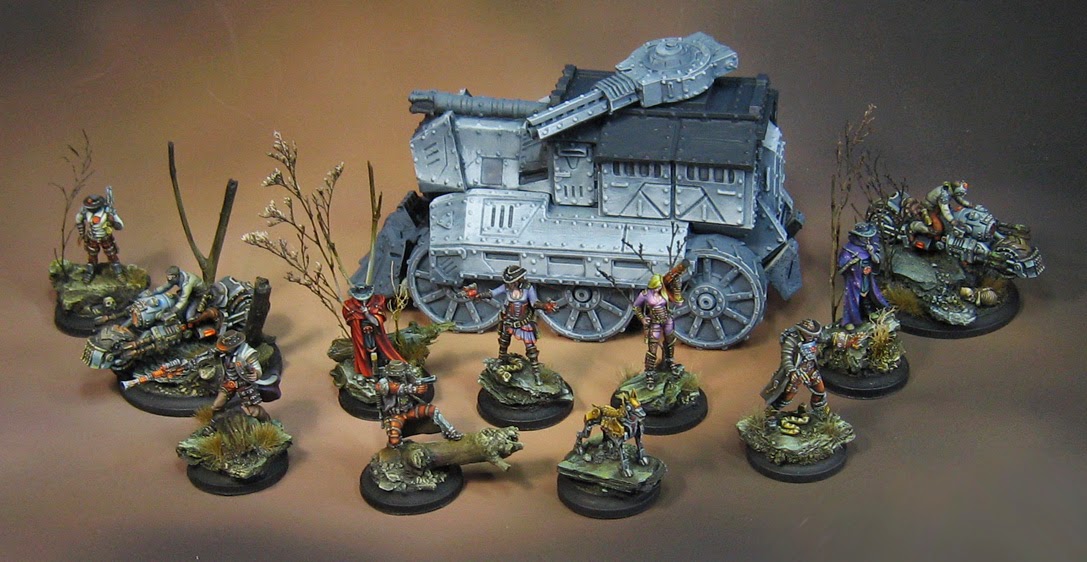 Wyatt even persuaded he brother Virgil to join the struggle.  This would be a fight like no other, as brothers and sisters would stand side by side to cast out the abominations of Carpathian! 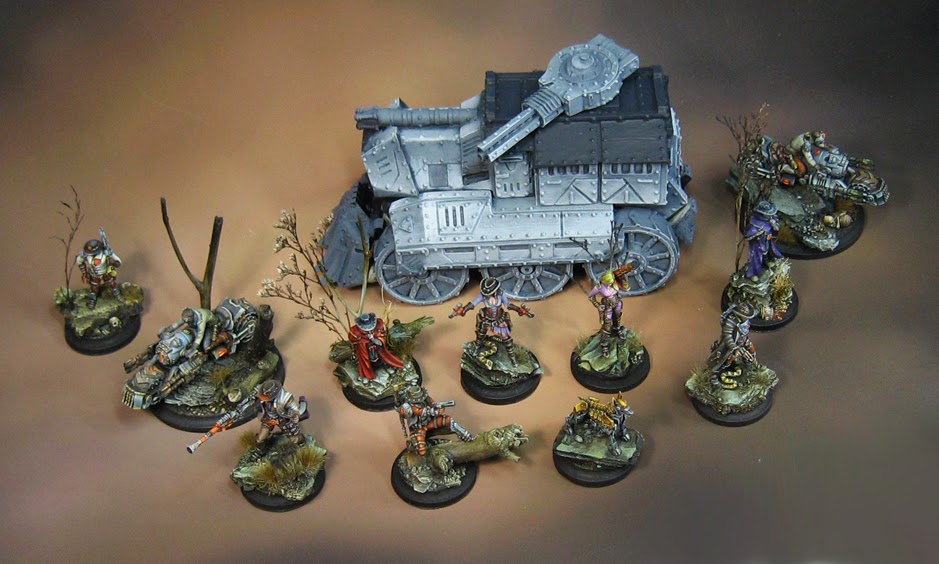 The Enlightened would be approaching from the more rebellious quarter of the town, headquartering in Miss Fannie's House of Horizontal Refreshment. 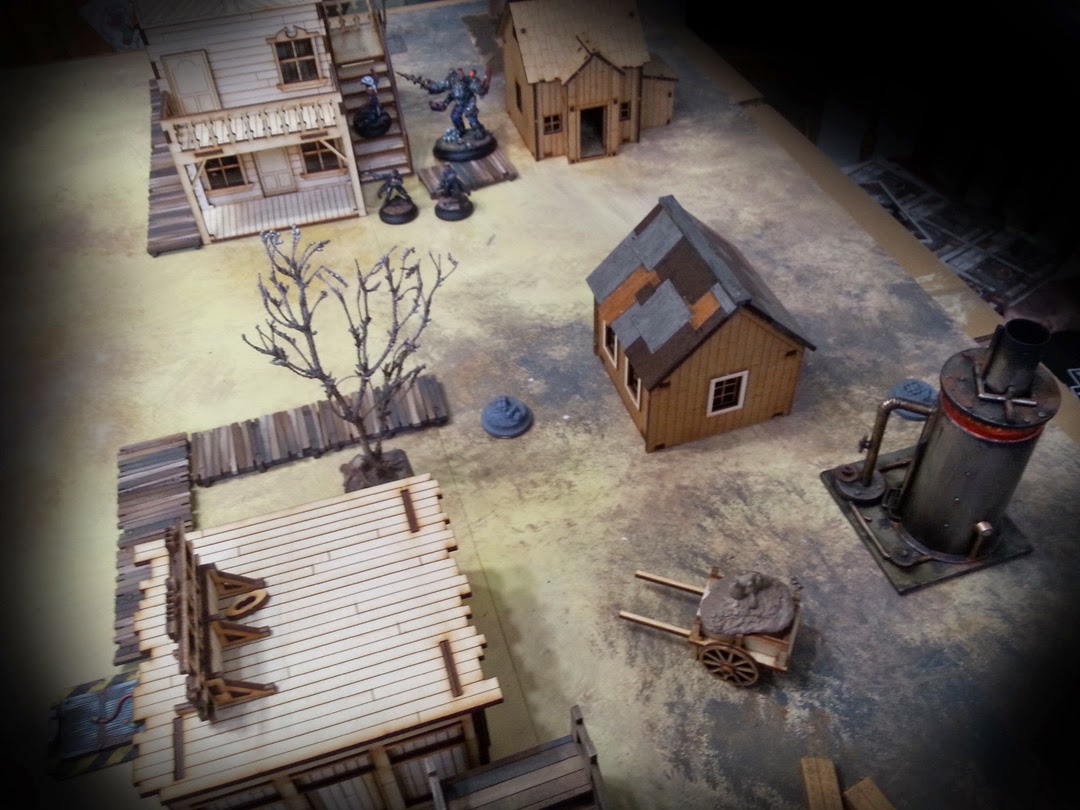 Wyatt would direct his Lawmen personally, headed right out from the Jailhouse in the opposite quarter. 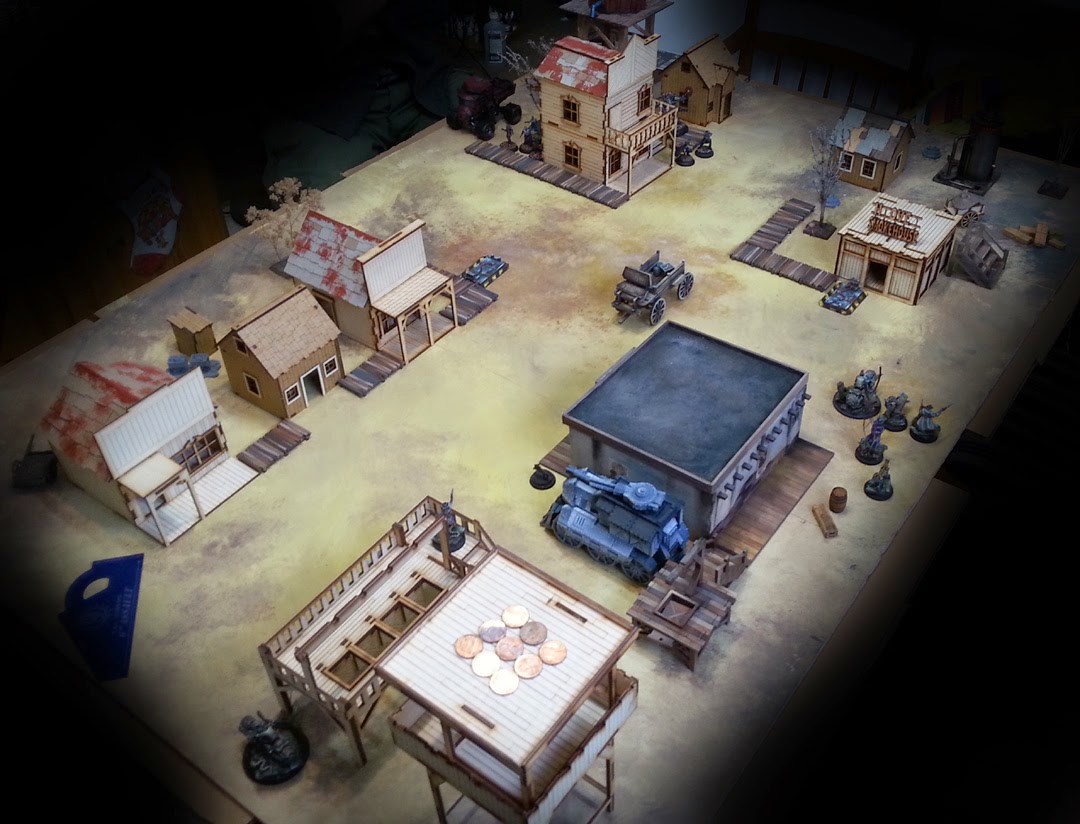 This time, Wyatt and his brother would march right down the main street of Wappelville to make sure the primary power station and it's vast supply of RJ-1027 would not fall into the enemy's hands.

Can the town of Wappelville be saved?  Will the dead rise again to claim more of the living? 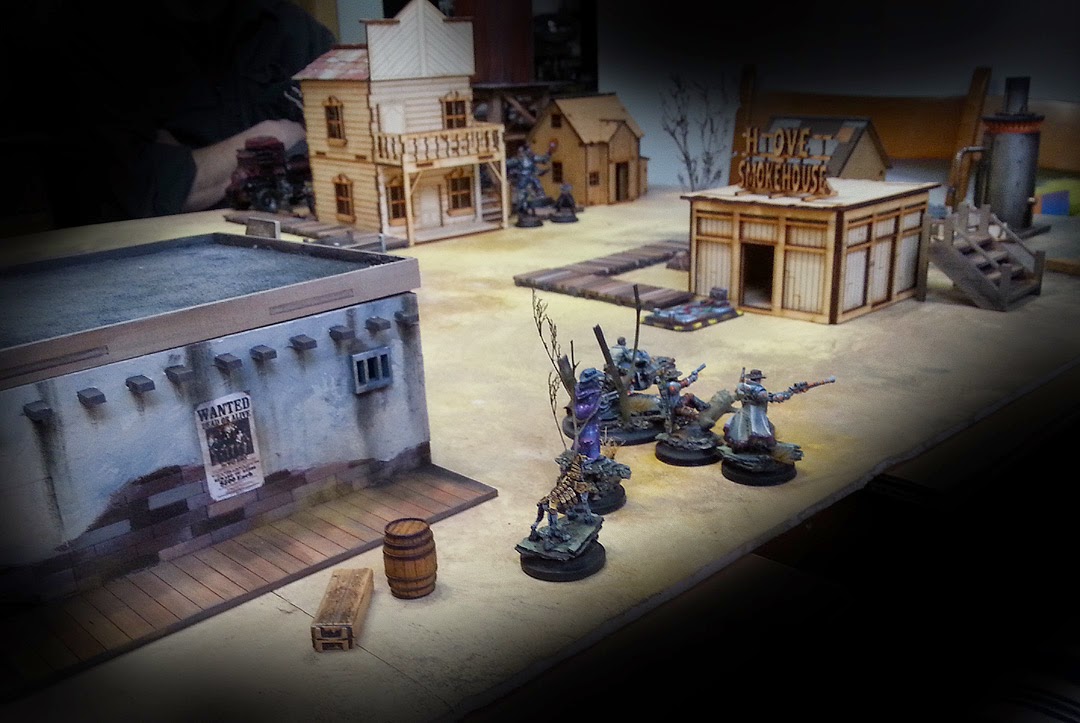