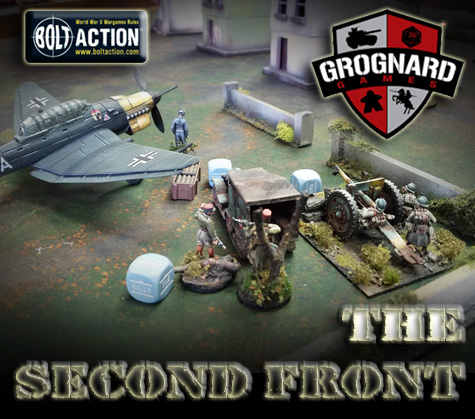 The deadly battle for the outskirts of Nouvion continues!  When we last saw the intrepid defenders, they were attempting to push forward into the German line of advance to blunt their progress.

Despite the presence of the Panzer 38T and the anti tank rifle, the Lorraine transport drove right into the teeth of enemy fire and dropped off the veteran squad into the nearest building, obviously at the direction of the officer nearby! 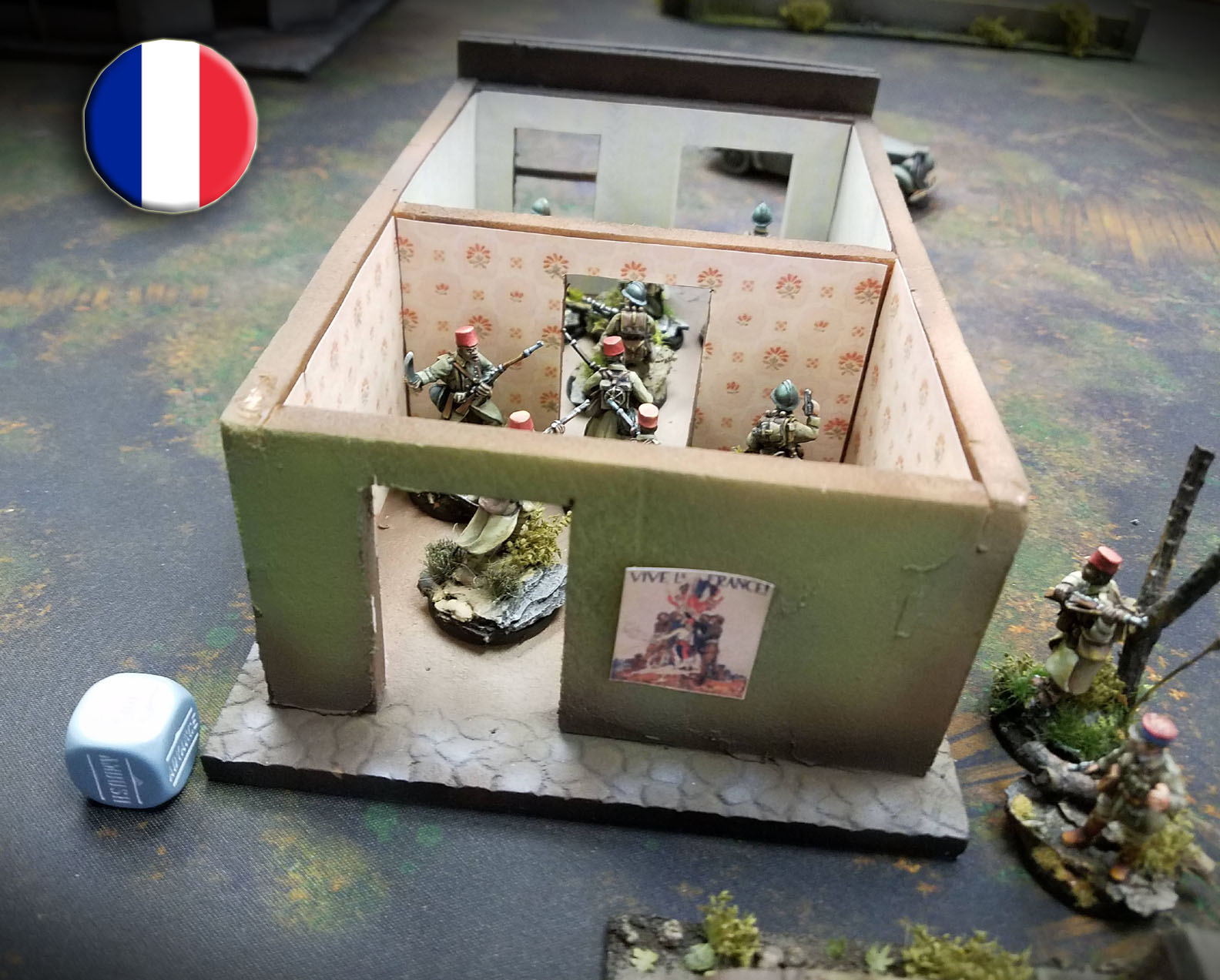 The German forces now saw the convoy of Laffly transports coming up behind the Lorraine, and the deadly machine gun mounts on each of them... 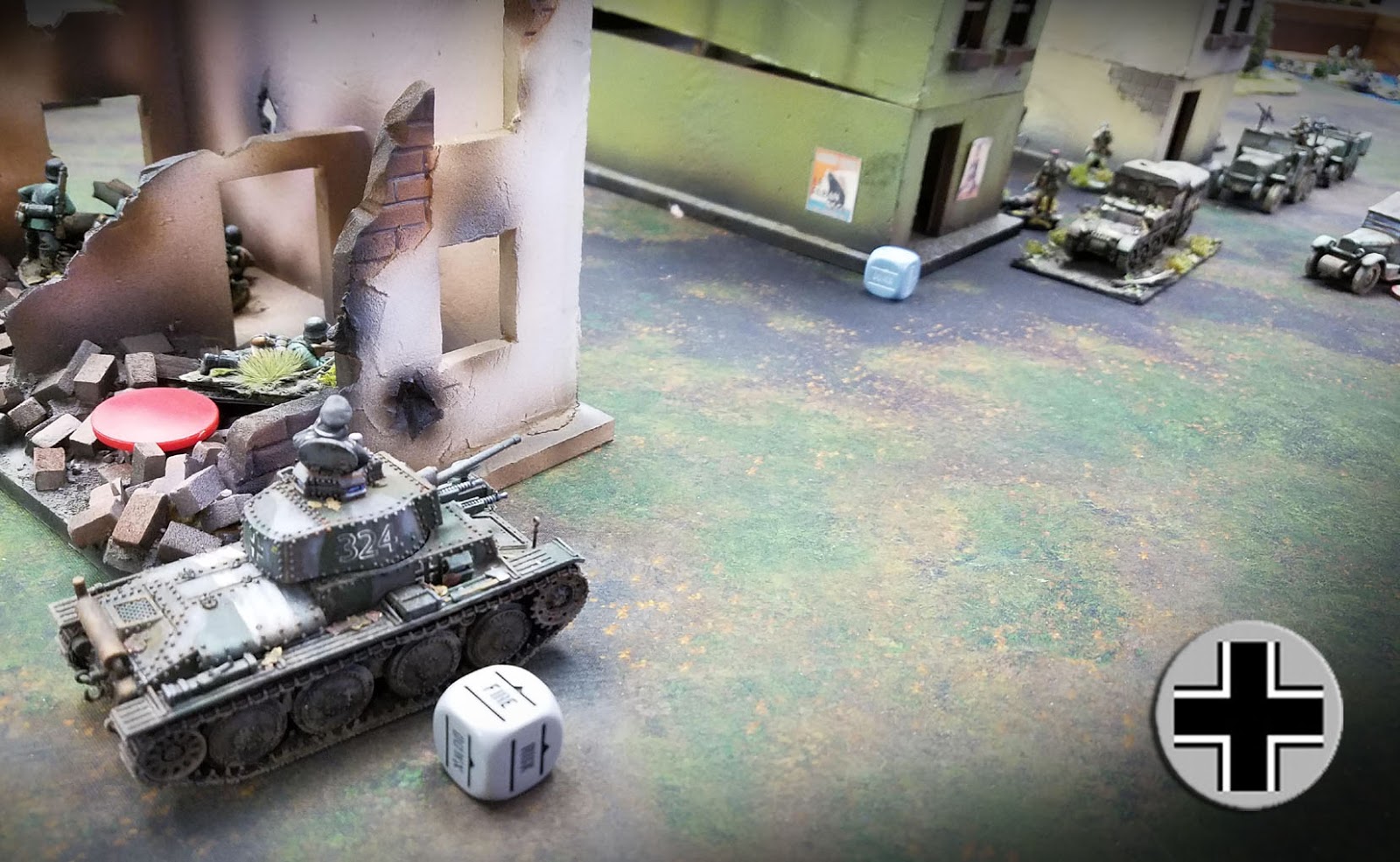 Each of the transports had to canter to the right in order to take cover behind the buildings and reposition to outflank the tank, Hanomag with its own passengers.  They could only go so far at this point, since the light howitzer had still not been dealt with! 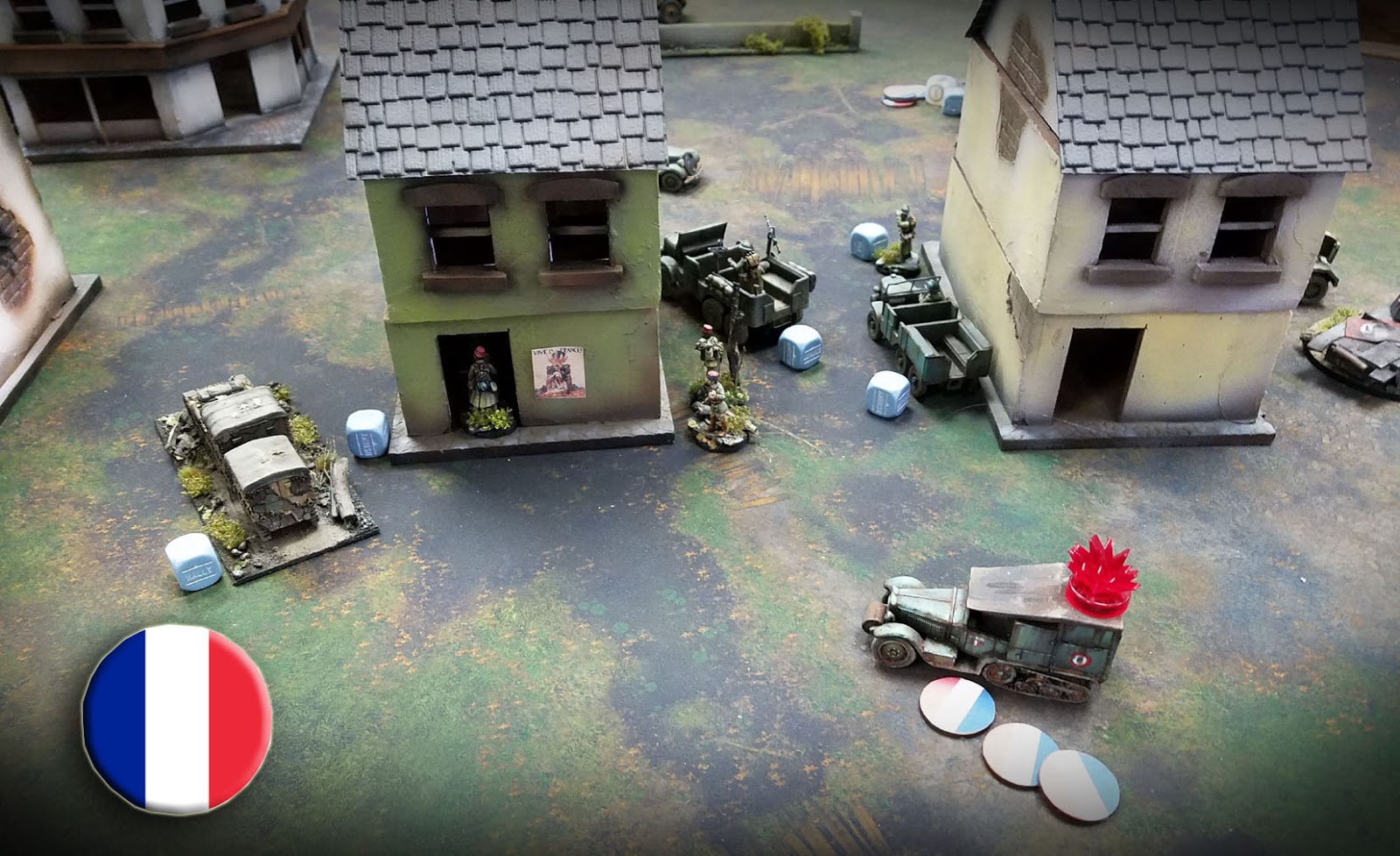 You can see what was waiting for the French troops here.  Not only was there a squad in the half track, another one was waiting in the Opel Blitz.

The howitzer had moved a bit to get out of the line of sight of the heavy French artillery.  This also gave it an improved line of sight to the street, preventing an easy advance by the Laffly transports. 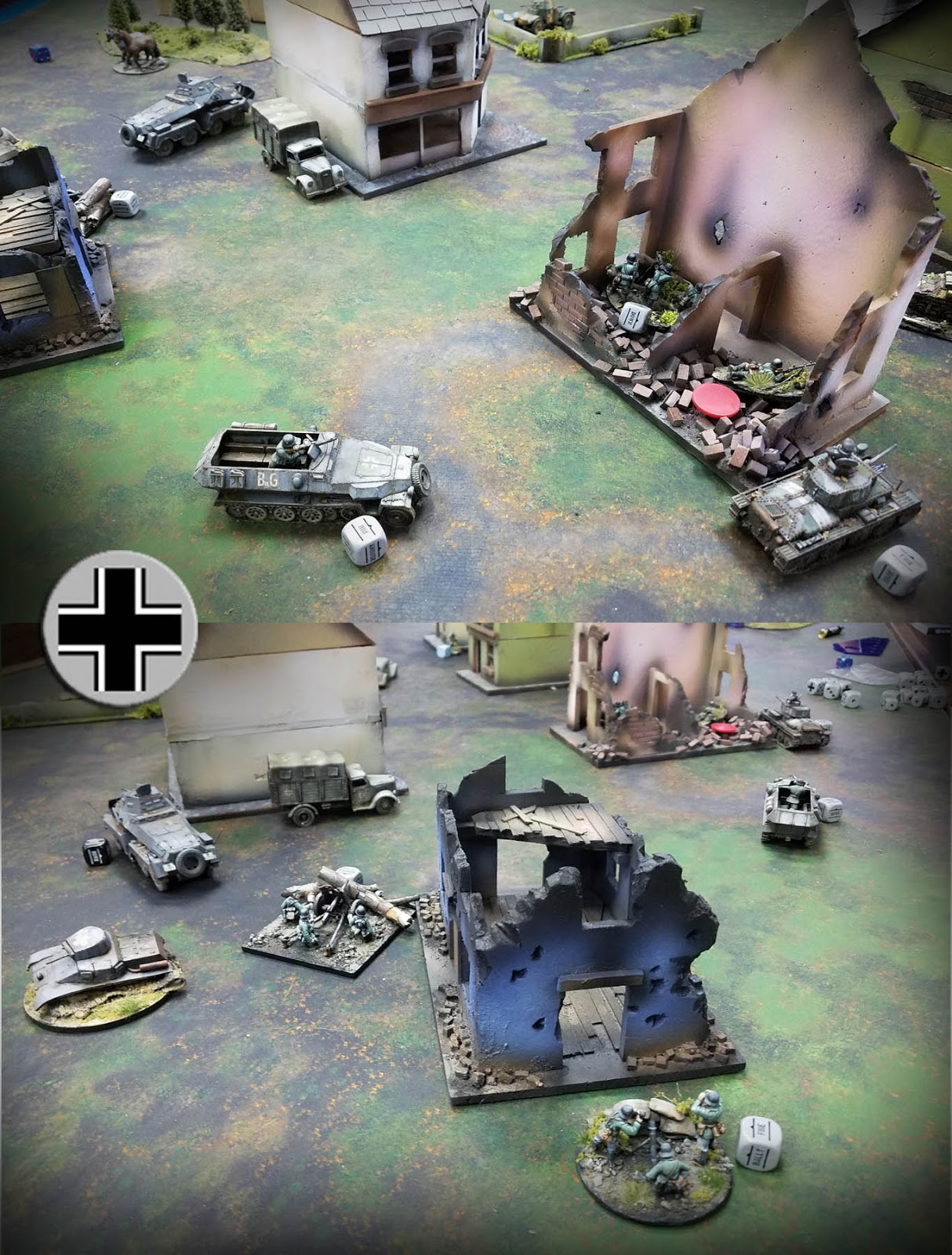 As the light began to fade in Nouvion, the French officer decided that he must gamble anyway, and drove the trucks into the street to pour fire into the waiting howitzer.  Even if it could not be destroyed, they could at least keep the crew cowering behind their gun shield! 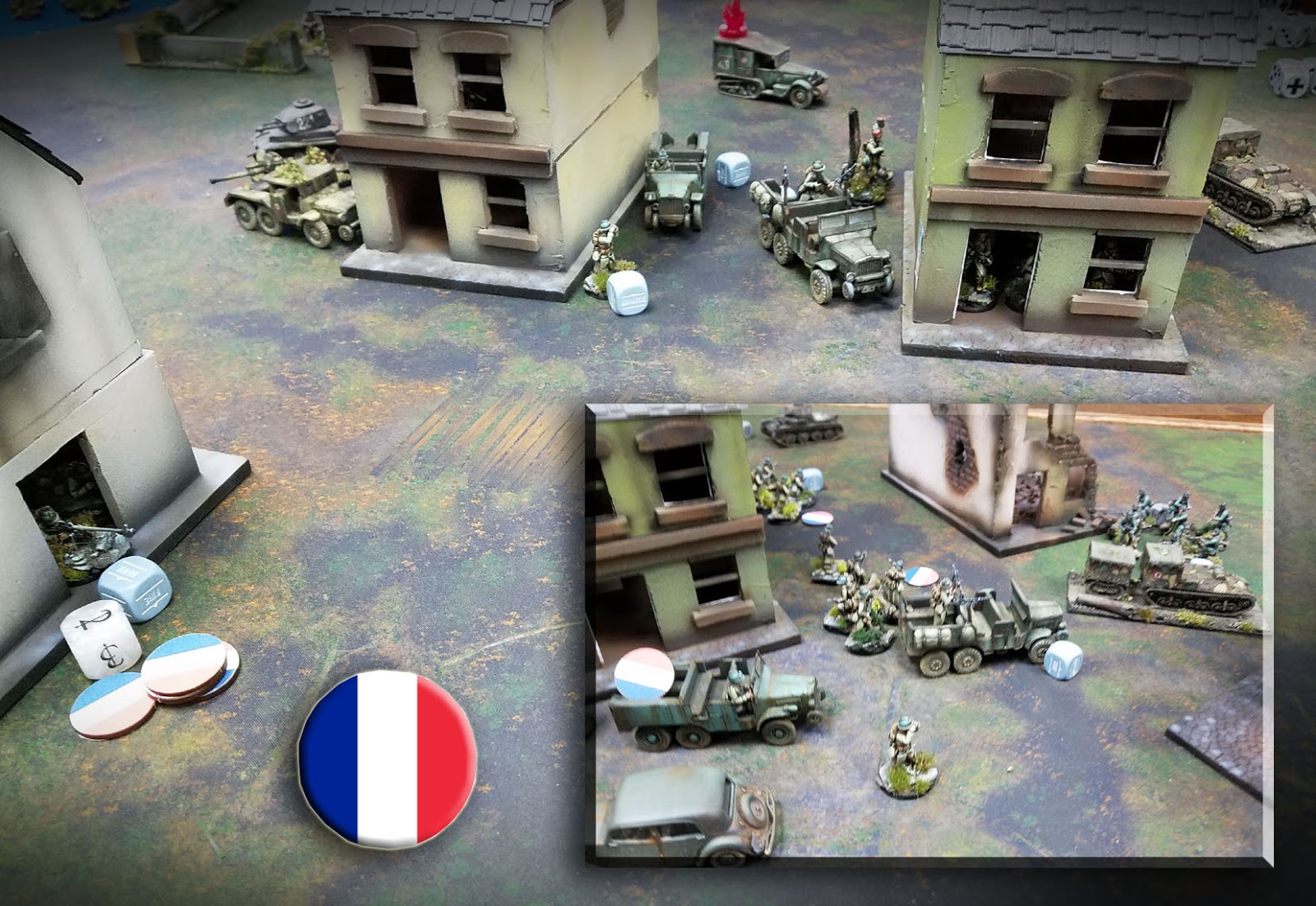 The Germans saw their opportunity to counter strike, and attempted to blast the Laffly WTC15 from point blank range!  Apparently auto cannons are designed to be used at much longer ranges, because each shot flew past the very relieved crew of the anti tank truck... 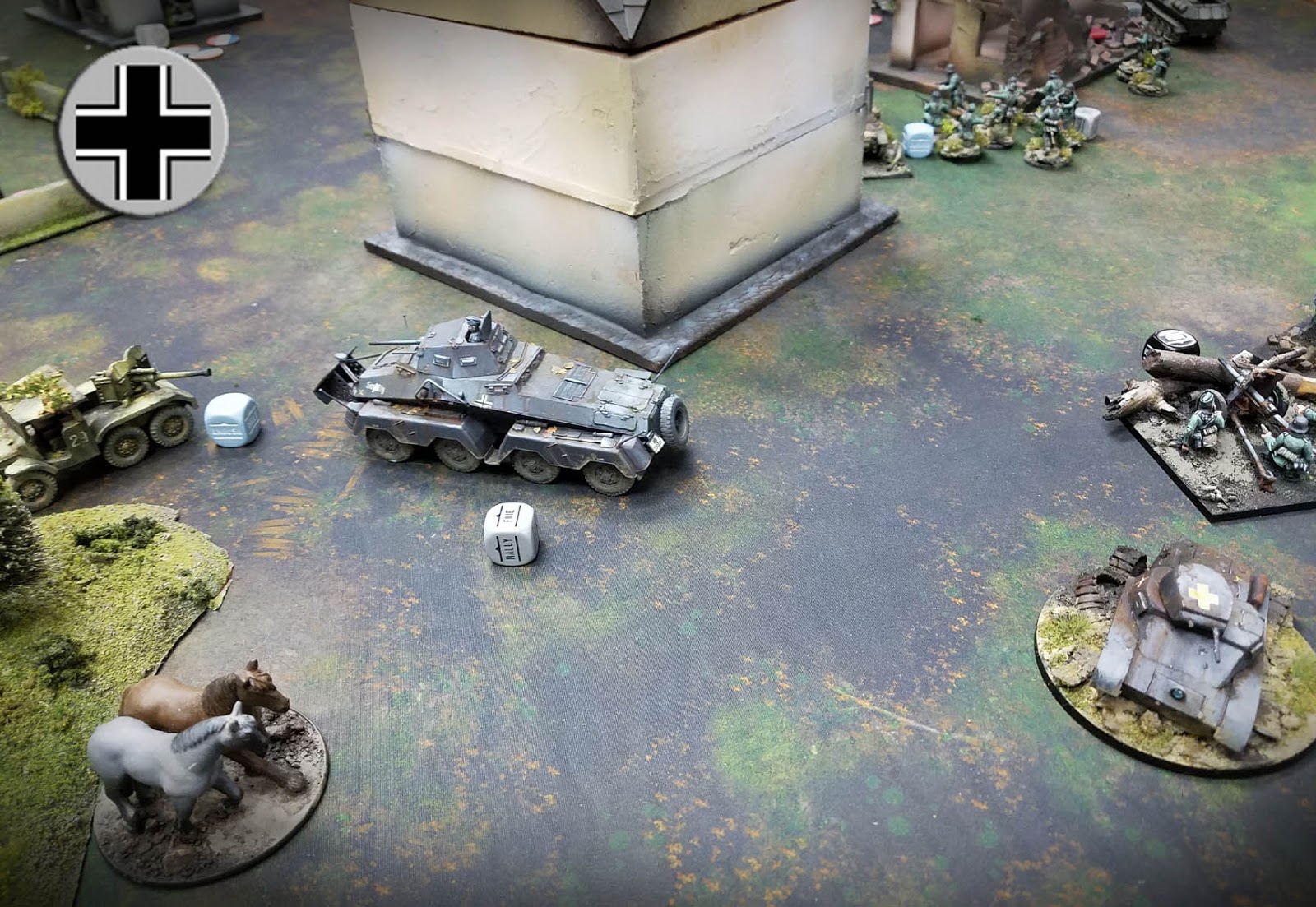 The Panzer 38T and the Opel Blitz moved well into one of the neutral sectors to score victory points and to machine gun the exposed French veteran unit.  A few managed to survive this barrage of fire, however.

The Opel Blitz drove as fast as it could to get past this maelstrom. 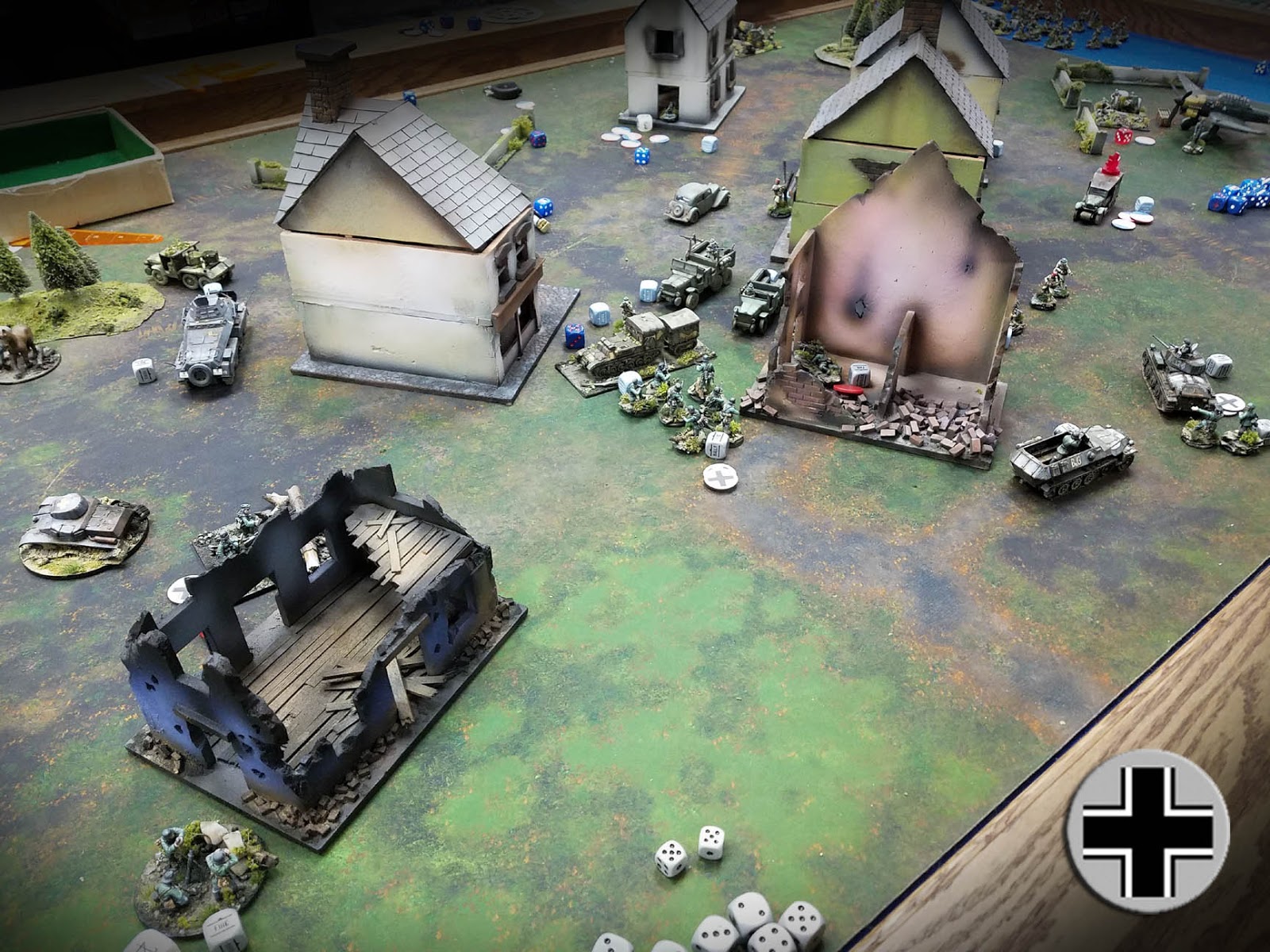 PinaPalooza continued, with the French units getting hit multiple times.  However, they were now well ensconced in both the neutral sector and even the German deployment sector.

The enemy would be forced to kill them outright to tip the balance... 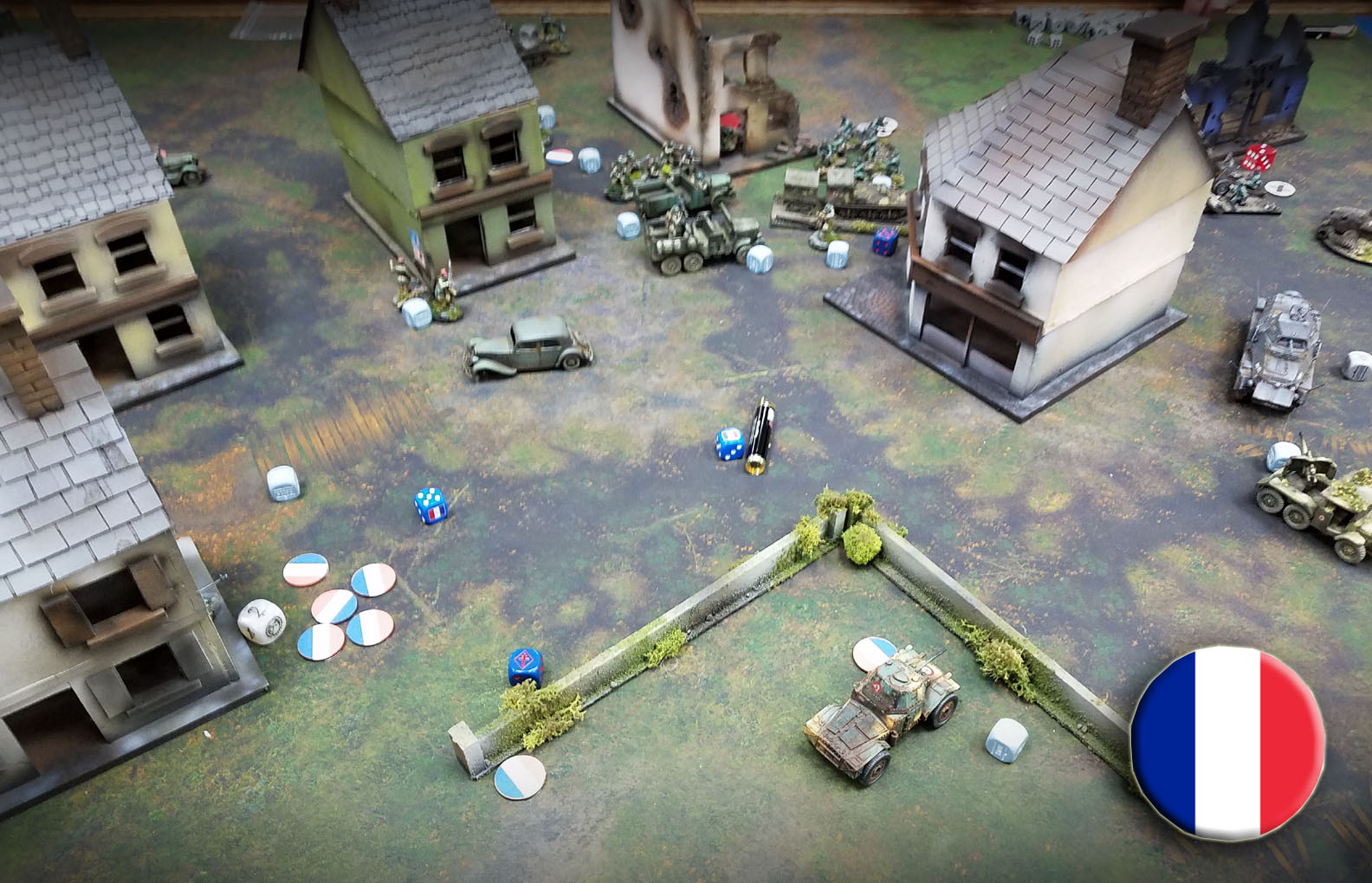 Even the mortar observer joined the march forward!  He could not see past all the advancing French units, so he almost had to move past them.

It was a very unusual method of spotting, as he essentially pointed to the howitzer just yards away and said, "laisse tomber ici, les gars!".

That's "drop it right here, lads!" to you Anglophiles. 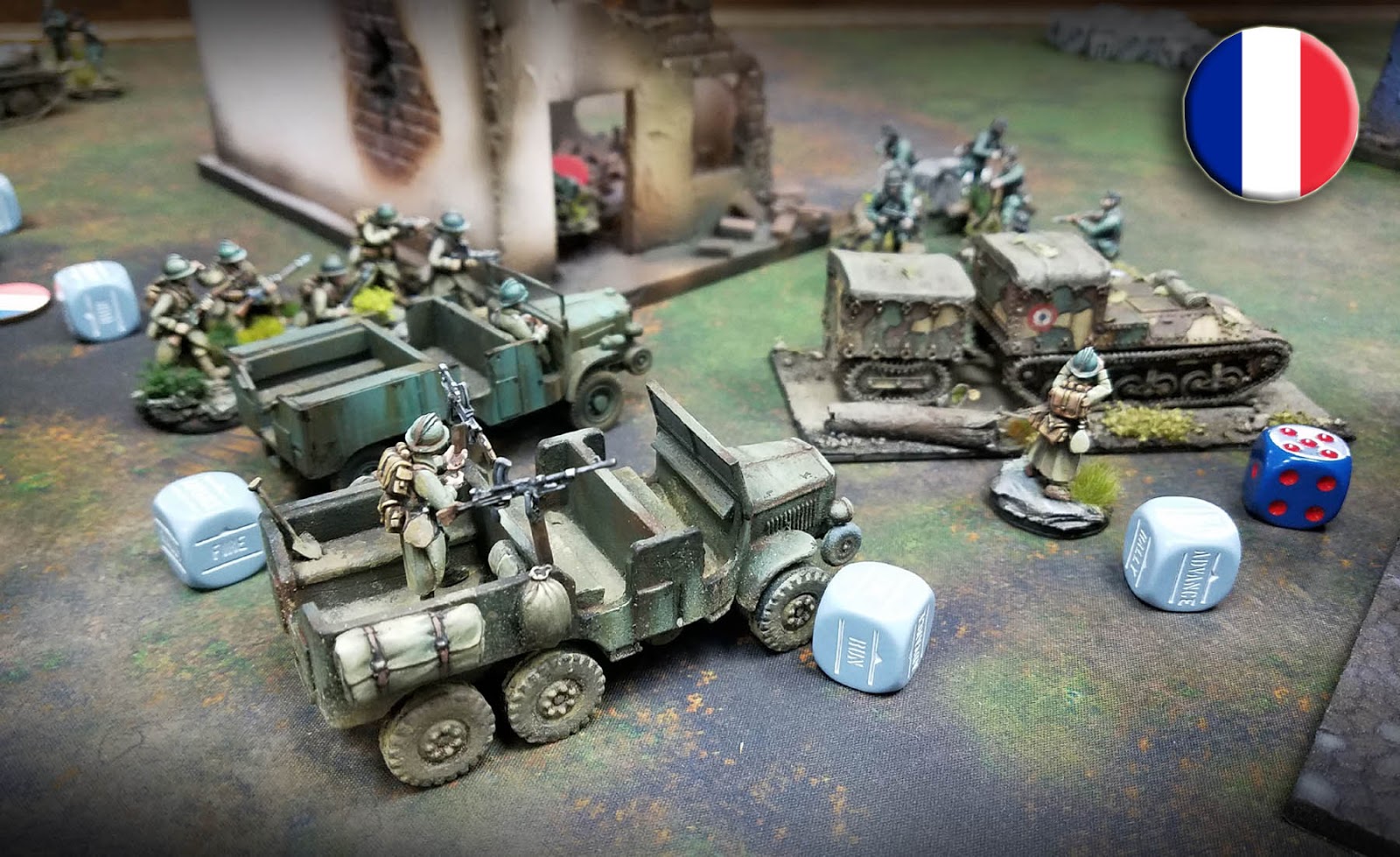 As darkness began to fall, deadly hand to hand combat ensued as the Wehrmacht forces attempted to drive the French back. 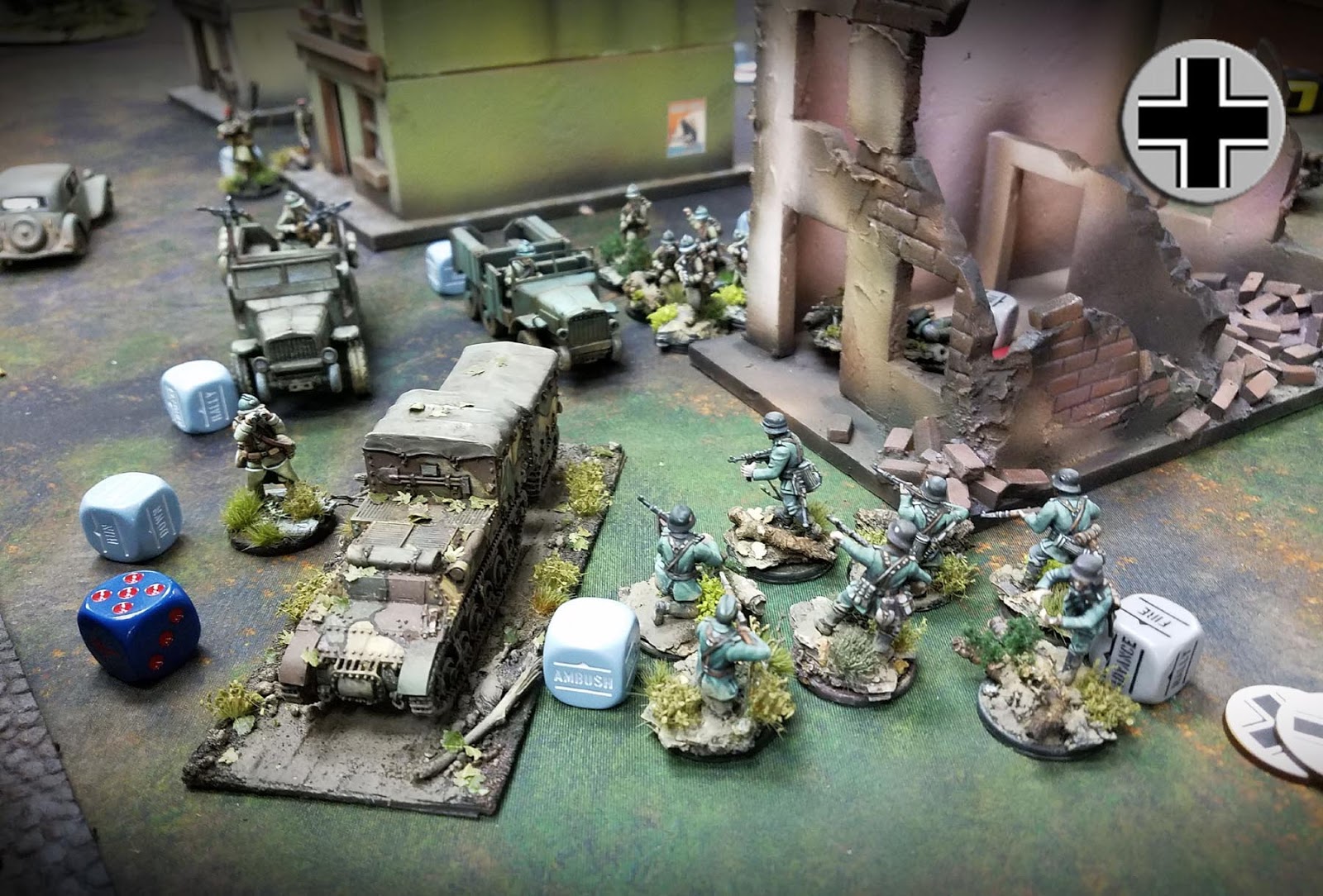 But there were simply too many targets to remove all at once!  As night fell, the action fell silent, and both sides slipped away to regroup and recover.  For now, Nouvion remains in French hands.  Will it remain so?

Perhaps as daylight returns, new reinforcements on both sides will be thrown into the battle! 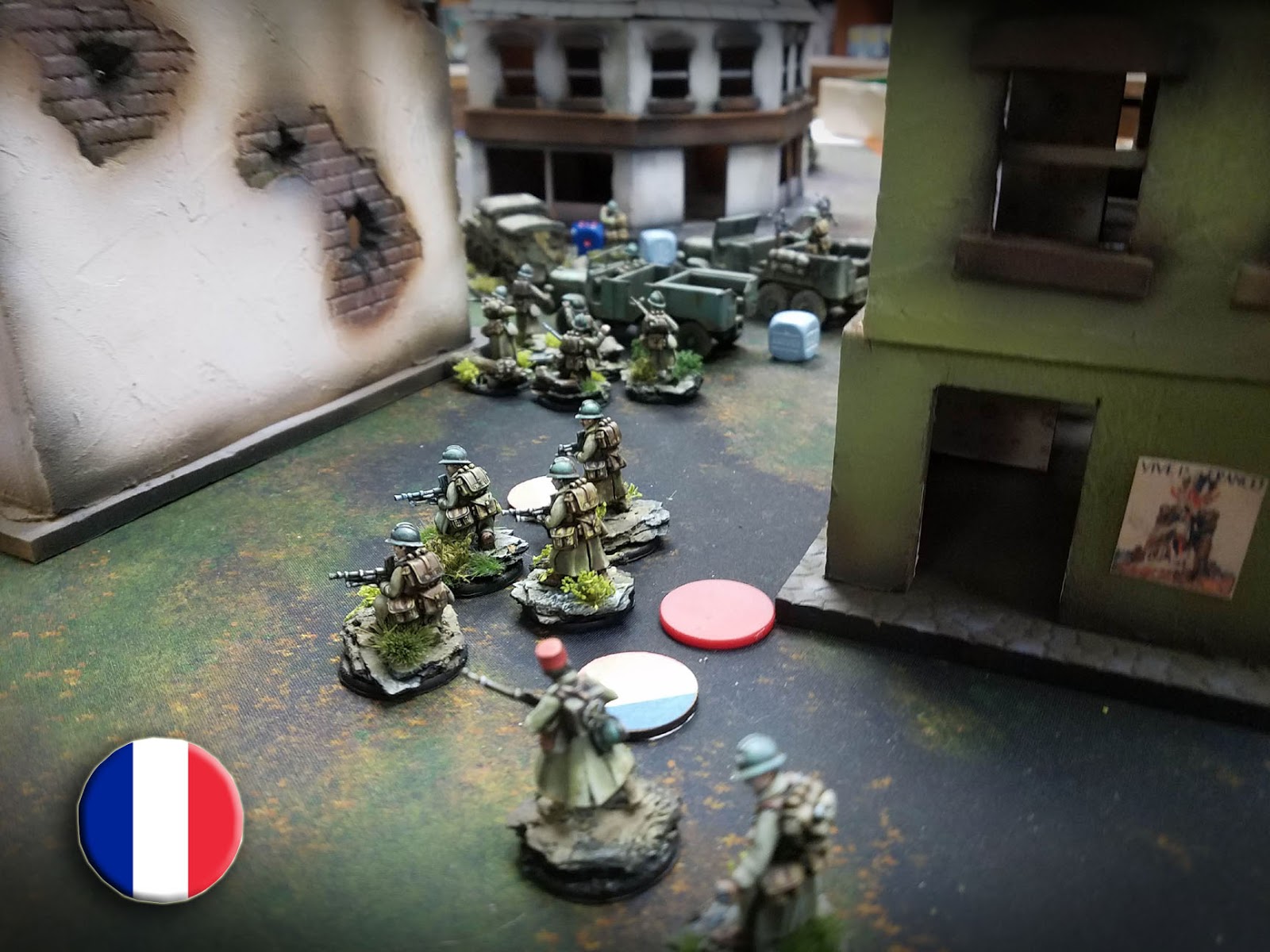 As I mentioned in an earlier post, we are hoping to make more regular "paint and play" trips to Grognard Games.  We think it will be a mid week thing, where we arrive early to play a game and then paint afterwards.

Once we get that settled, we will announce that on Facebook, etc

First, we have to do Reapercon, which is very close!  We will have Fort Wappel up and running, with plenty of live demos and mayhem!! 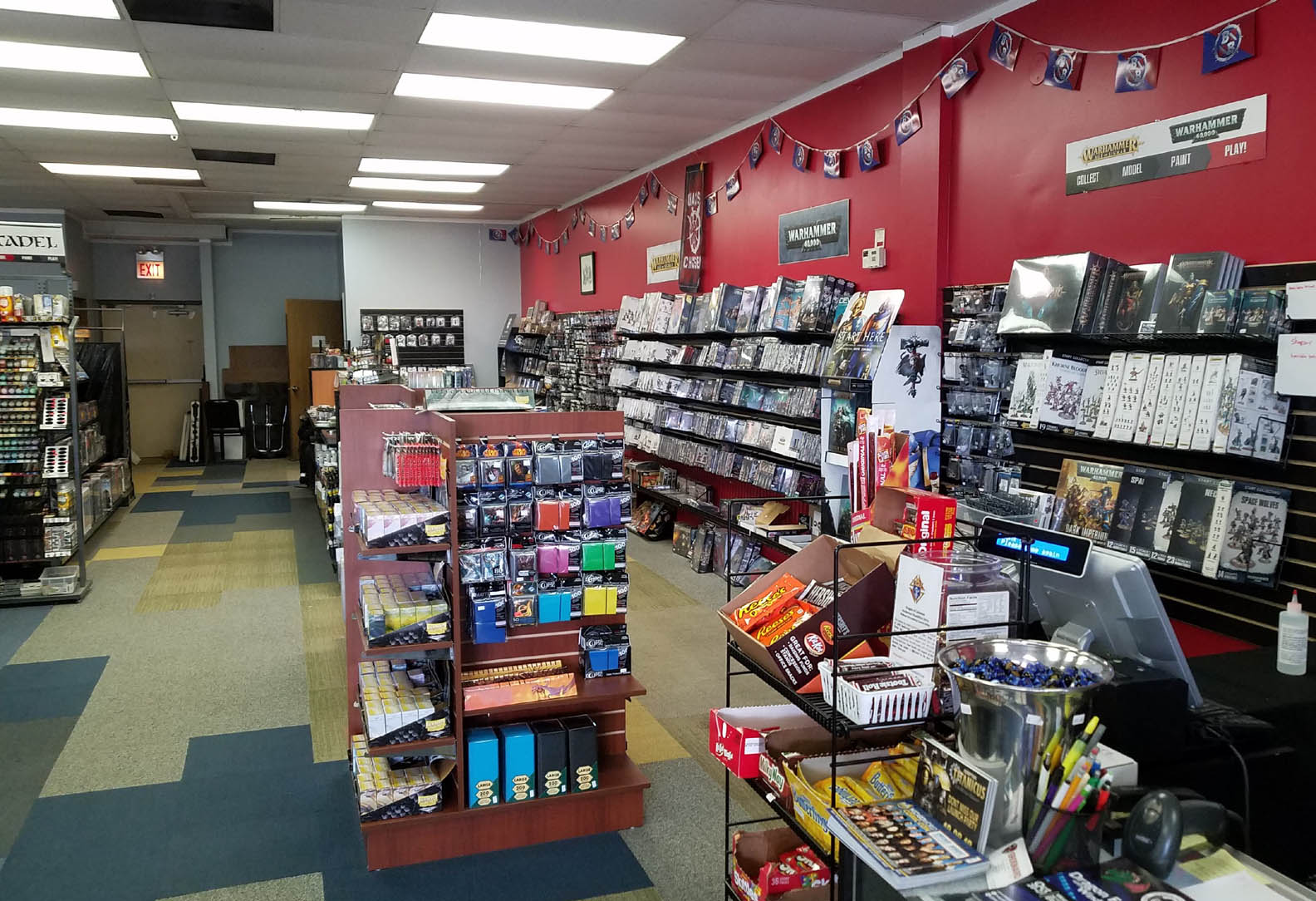