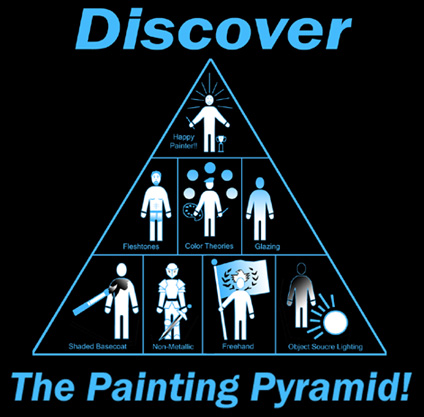 At long last, what seemed little more than a dream has now become real.  Many have already helped us get this far.  Marty, Rich, Jon, CMON, Raging Heroes, Urban Mammoth, all the Beta Testers.  My heartfelt thanks goes out to you.

But now the real work begins!

Here is the link to the project:

As you loyal Wappellians already know, it took me quite a while to get the proposal written up.  It took me a while to get all the graphics completed, and I want to give you a little review of them now.

With such a long list of DVD subjects, it was very challenging to come up with a system so that people could choose what they wanted.  So, I made the master list shown in the $20 pledge level.  There is no formatting allowed in that column, so I had to rely on the "story" area to the left.  I created a banner for each of the DVD's, and gave it a number.  The numbers match the list, and give a bit of a synopsis of each one. As I make sample videos, I will try to post them as soon as possible!

We had to keep the original number of DVD's to a reasonable number.  Starting out with a full list of 50 would have been overwhelming, and delayed release times significantly!  We wracked our brains to get to that number of 20.

Hint, hint... think Stretch Goals!
That seemed to be the best option to boost that number of subjects.

I have some basic extra things to start, such as the T-shirts and the dice.  When we start making the dice, I will get preview images posted as soon as possible.  Same for the shirts!

Also, I put in a limited amount of my art prints.  It was suggested by Kickstarter to have such things, so they are part of this first go around! 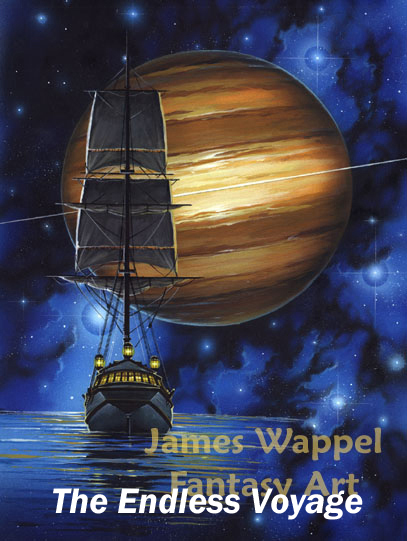 It is my hope that everyone will be happy with this attempt.  There is not exactly a school for doing stuff like this, and it has been lots of trial and error.  I am putting everything I have into this, so it is now full speed ahead!

Here is the screen as I was about to launch... 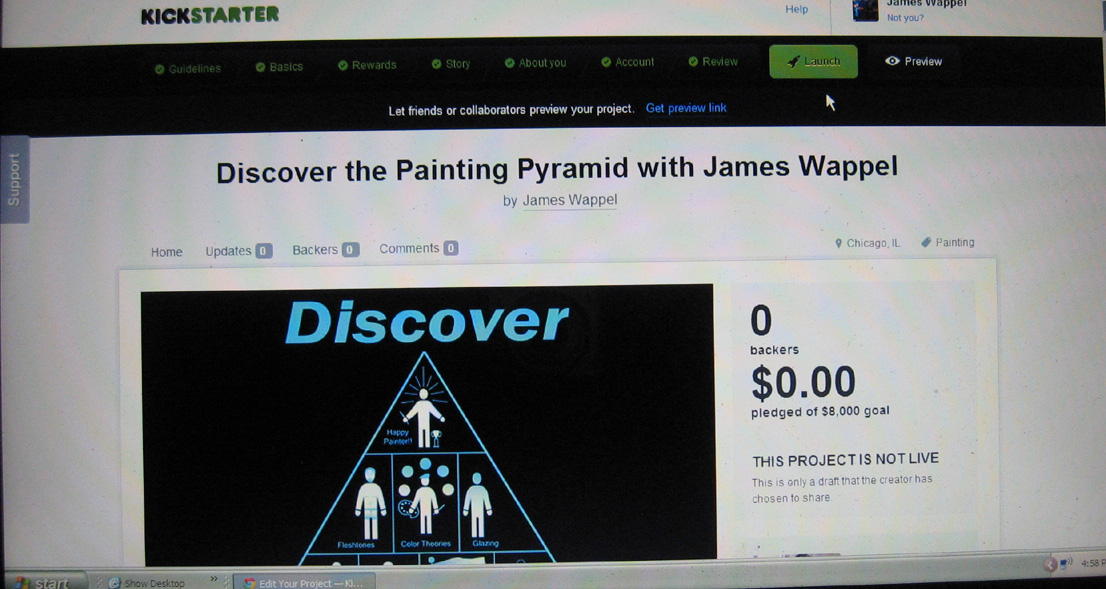 There are also some larger stretch goals we have in mind, but we didn't want those to get in the way of the approval.  I promise, there are some nice big things we have in mind.

Now I must get out the word on Cool Mini!!!

Thanks to everyone here and on Facebook, who have been encouraging me all the way.  There is no way I would have gotten to this point without you.

The conclusion of the Mantis flesh tones... 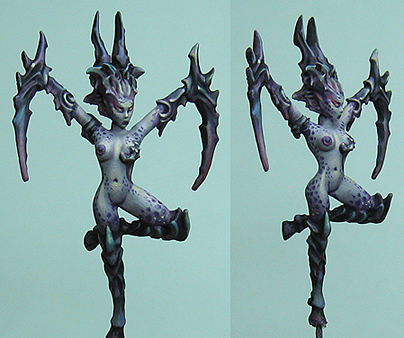 Here is the continuation of the Mantis demonette from Raging Heroes.  At this point, I had done all of my dark glazes, and was working back into the middle tones.

Since the GW washes work like glaze medium (that is, they act as a drying retarder), mixing regkuar paint colors with them can yield interesting results.  When I did my middle tones here, I mixed lighter colors in with my dark glazes.  For instance, I mixed some of the flesh tone in with the dark blue glaze.  This gave me the lighter color that you see on the claws, head and legs. 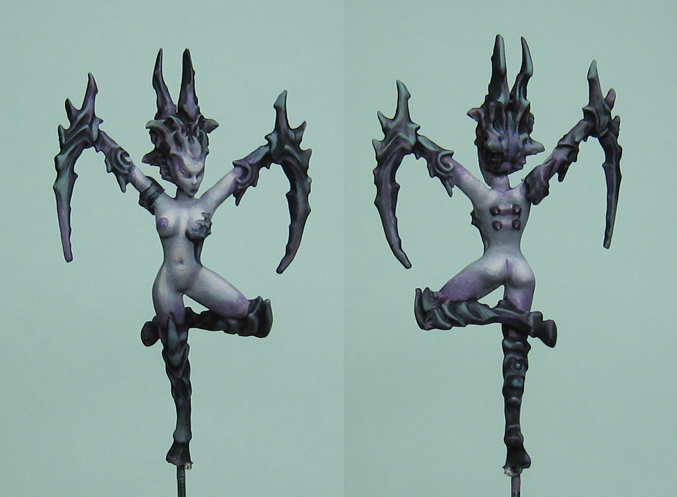 For this stage, I began mixing a sky blue in with the current mix.  I also mixed some dark purple together with the sky blue to begin painting the spots... 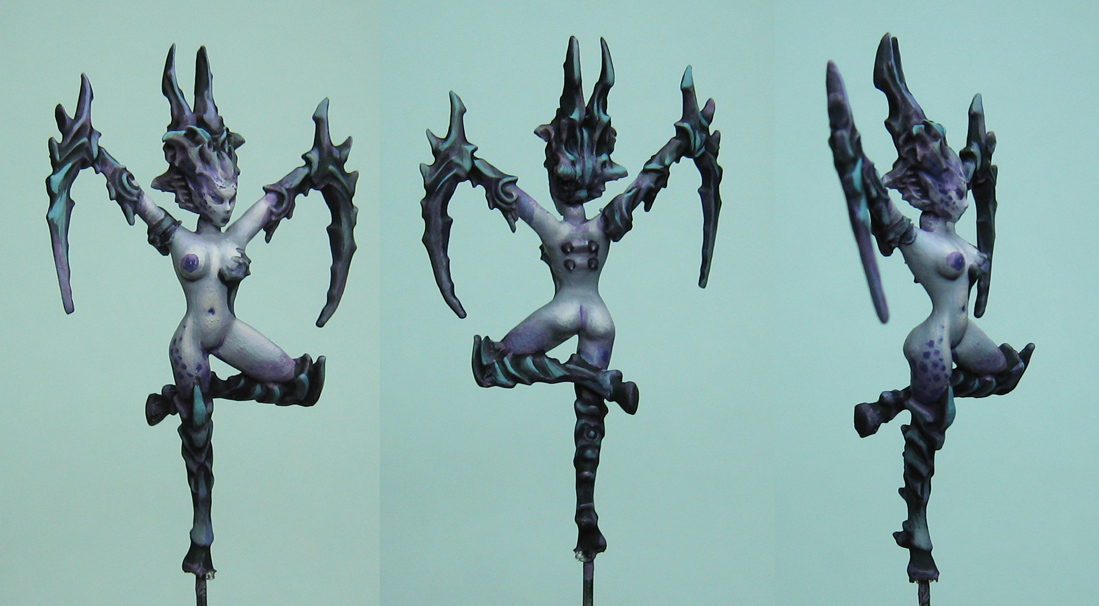 I also mixed a bit of magenta in with some of the spot color.  I didn't want all the spots to be the exact same shade. 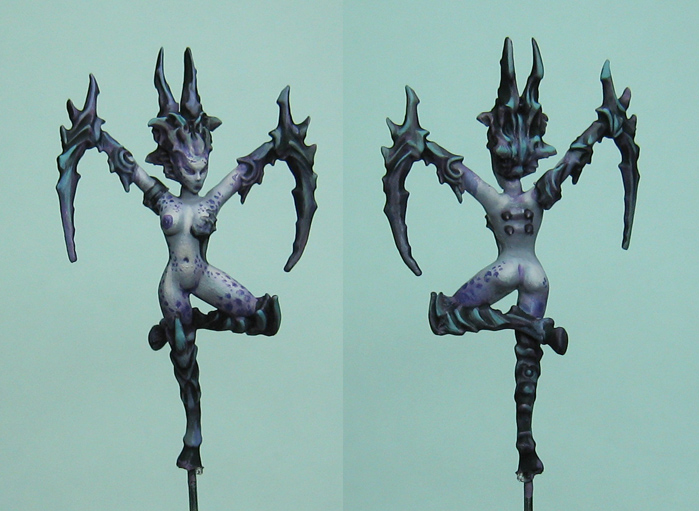 I started to add a pinkish color to my highlights on the claws and head.  I also mixed in a yellow white with my lightest flesh tone mix for some brighter highlights on the flesh.  The reason I waited a bit longer to do this was it allowed me to see what the darker colors would look like first.  I think all of this will make more sense in video format! 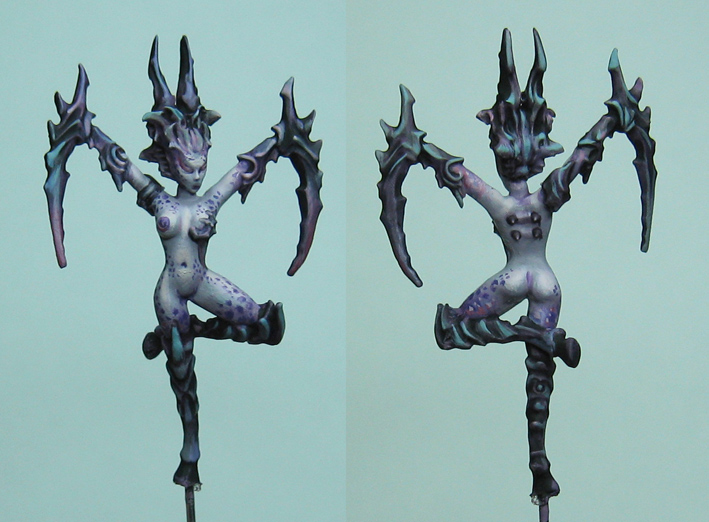 Obviously, there is only so much I can show in these still photos.

Anyway, you can see in this image that I worked on the eyes.  I mixed a bright red and used that to line the edges around the eyes.  Since it was the warmest, most saturated color on the entire figure, a tiny bit of it helped the eyes to stand out.

You can also see that I went back into the shadow areas and added a few lighter spots. 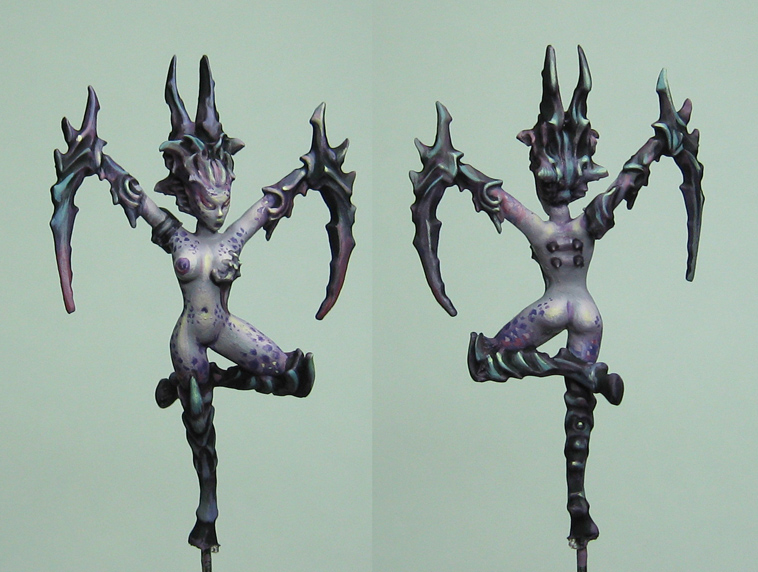 Here I have added a little bit of darker color to the lining around the eyes, and also done some very bright highlights on the claws, head and legs. 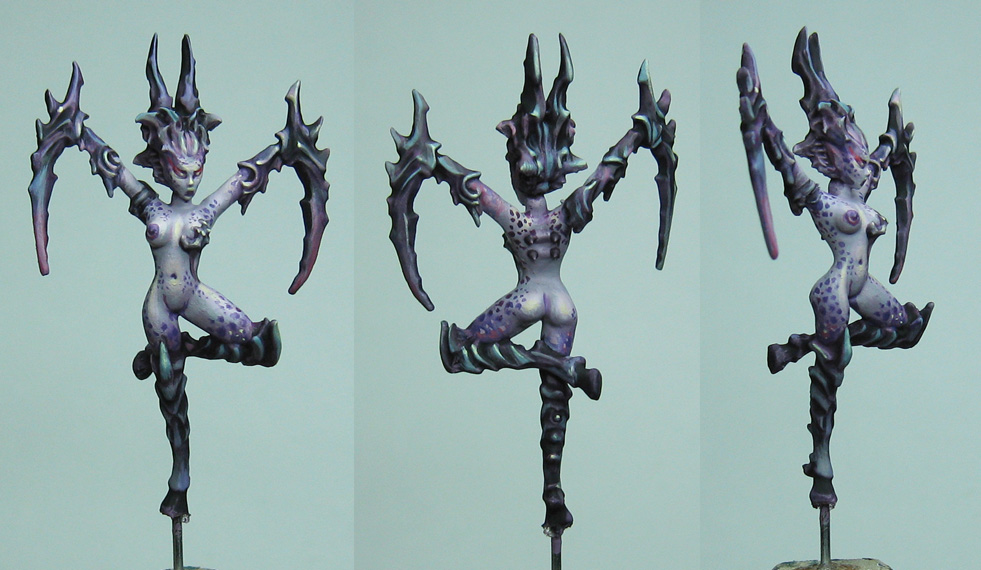 As the miniature drew to a close, there was some more highlighting, but I also did some work in the darkest darks.  I took some of my middle tone color and added it right in the center of some shaded areas.  This is another little thing I love to do on Chaos type miniatures.

So, later today I will post some images of the finished figure on its base!

This demo will be part of my "Four Fleshtones of the Apocalypse" series that demonstrates non-human flesh tones.  The others will cover Dark Elf flesh,  undead/vampire, and orc/goblin flesh 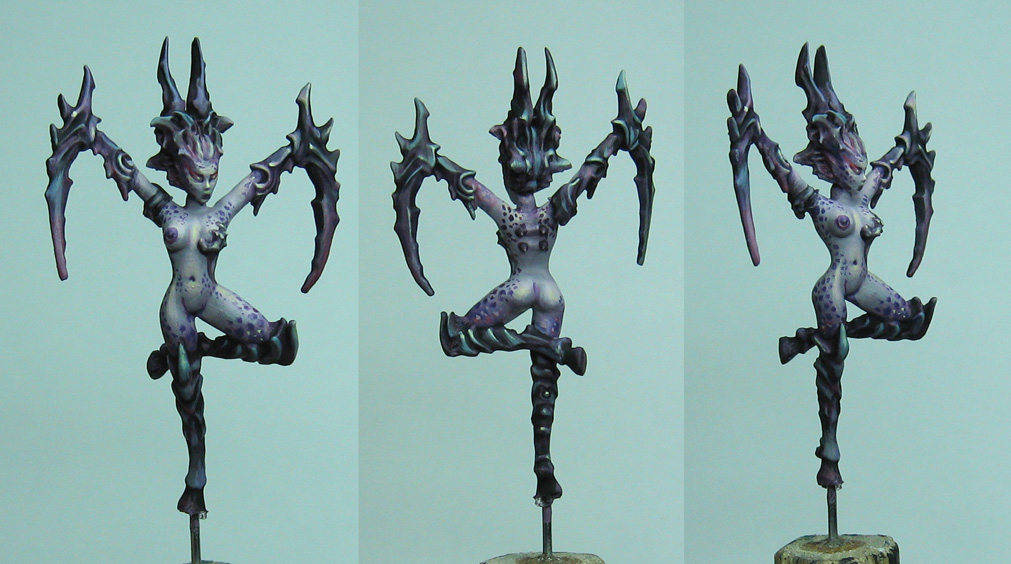 Rollin' along... Another invention from Rivet Wars! 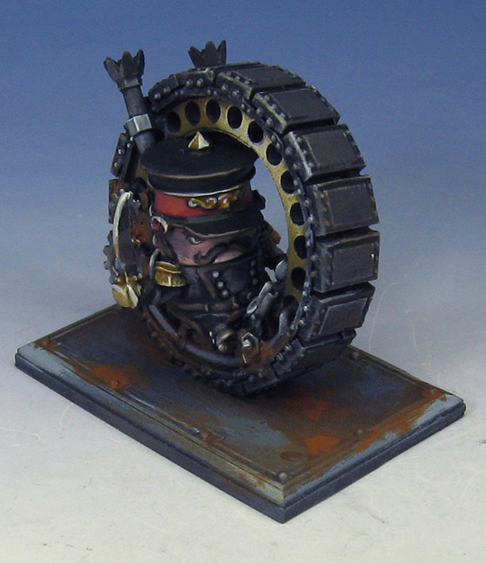 OK!  We have the next installment of Blighters from Rivet Wars.  How's this for a way to get around town?! 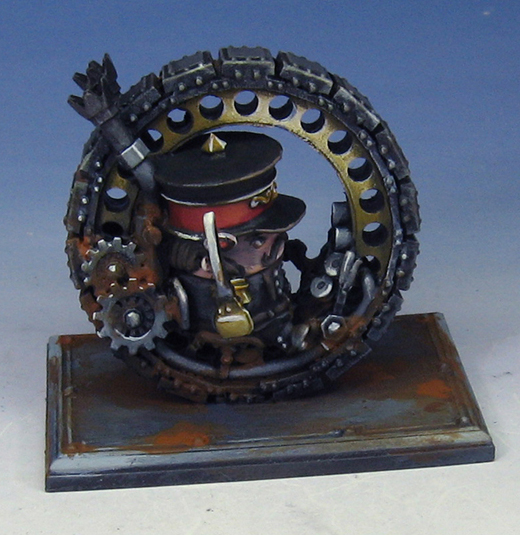 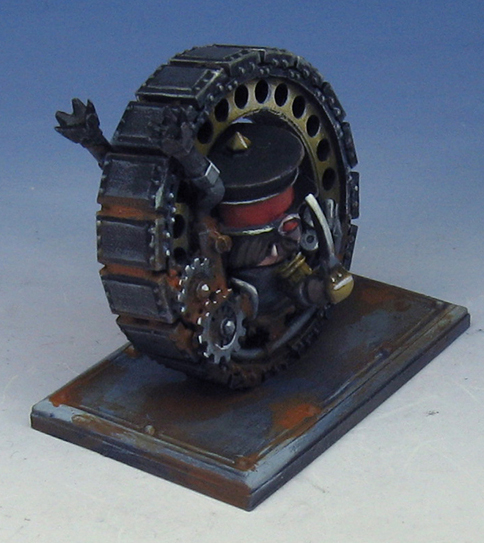 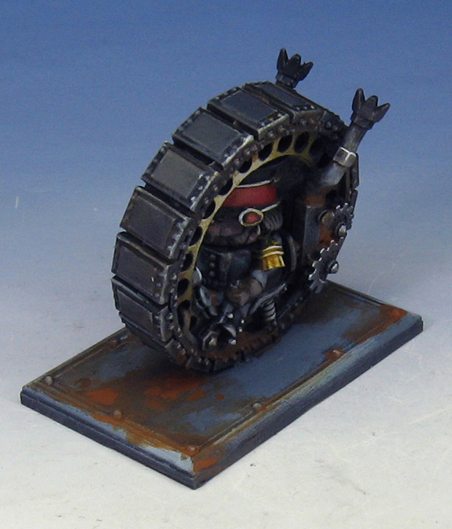