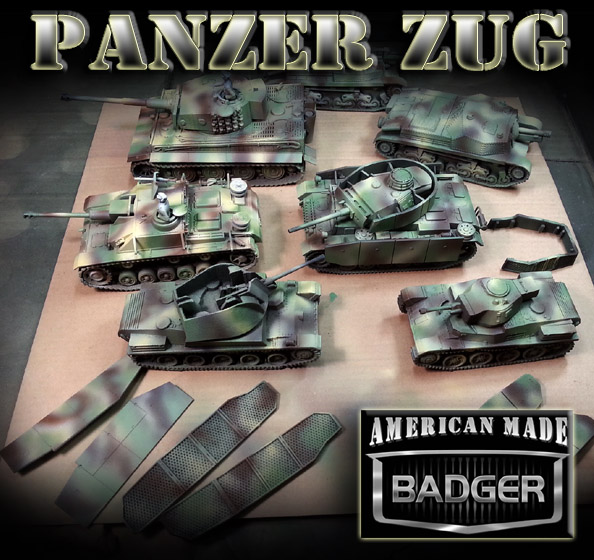 Picking up where we left off in the previous episode, it's time to add in the final part of the camo pattern.  This will be done will the yellow primer and a touch of deeper yellow airbrush paint (all fro Badger). 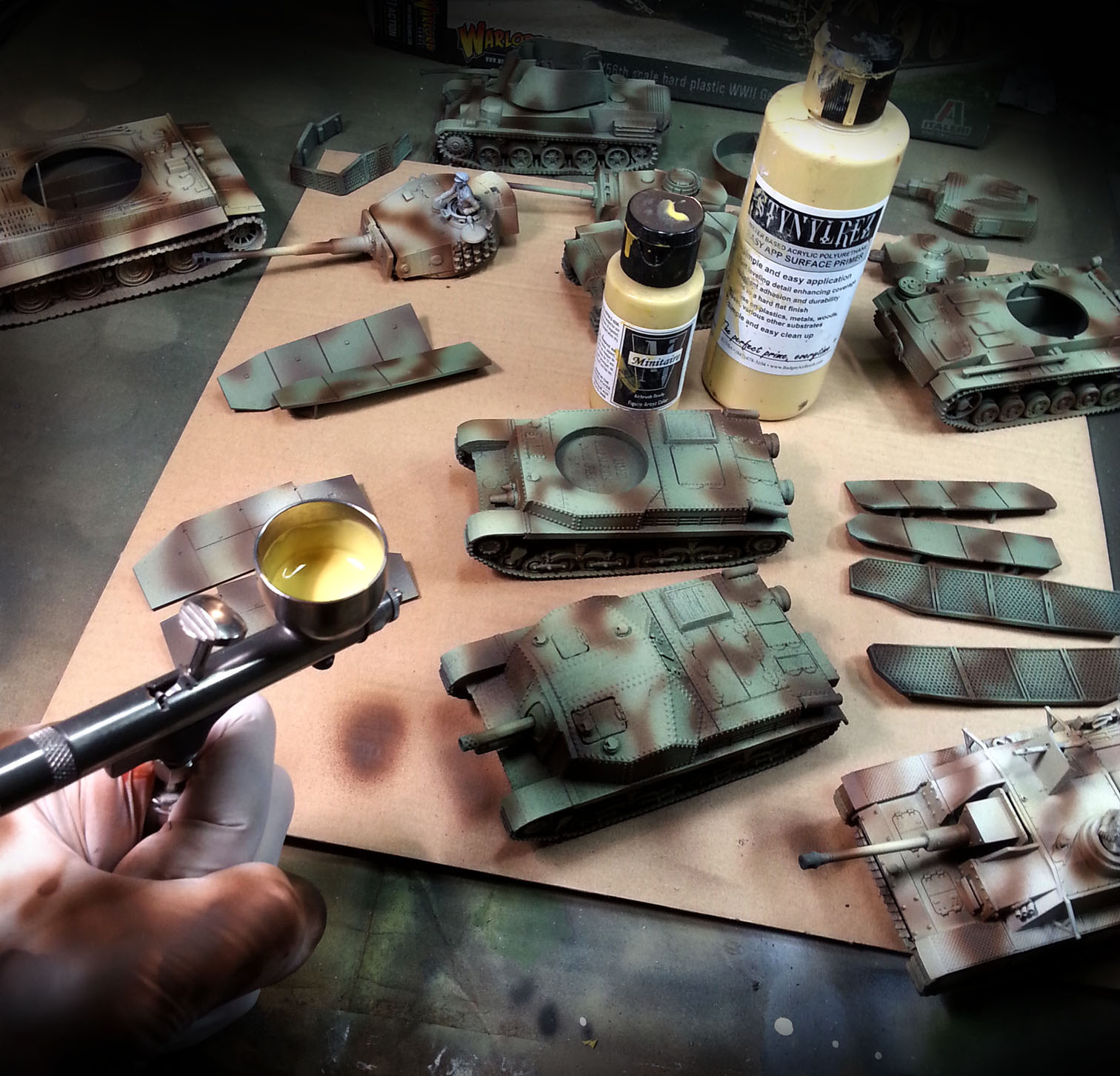 Just like the applications of the greenish colors, this will be lighter than the final result.  That leaves enough space to allow for subsequent glazes and weathering.

It makes an immediate difference.  Also, I try to have this lightest part of the camo strategically placed in areas where I wanted to have more chipping and rust effects. 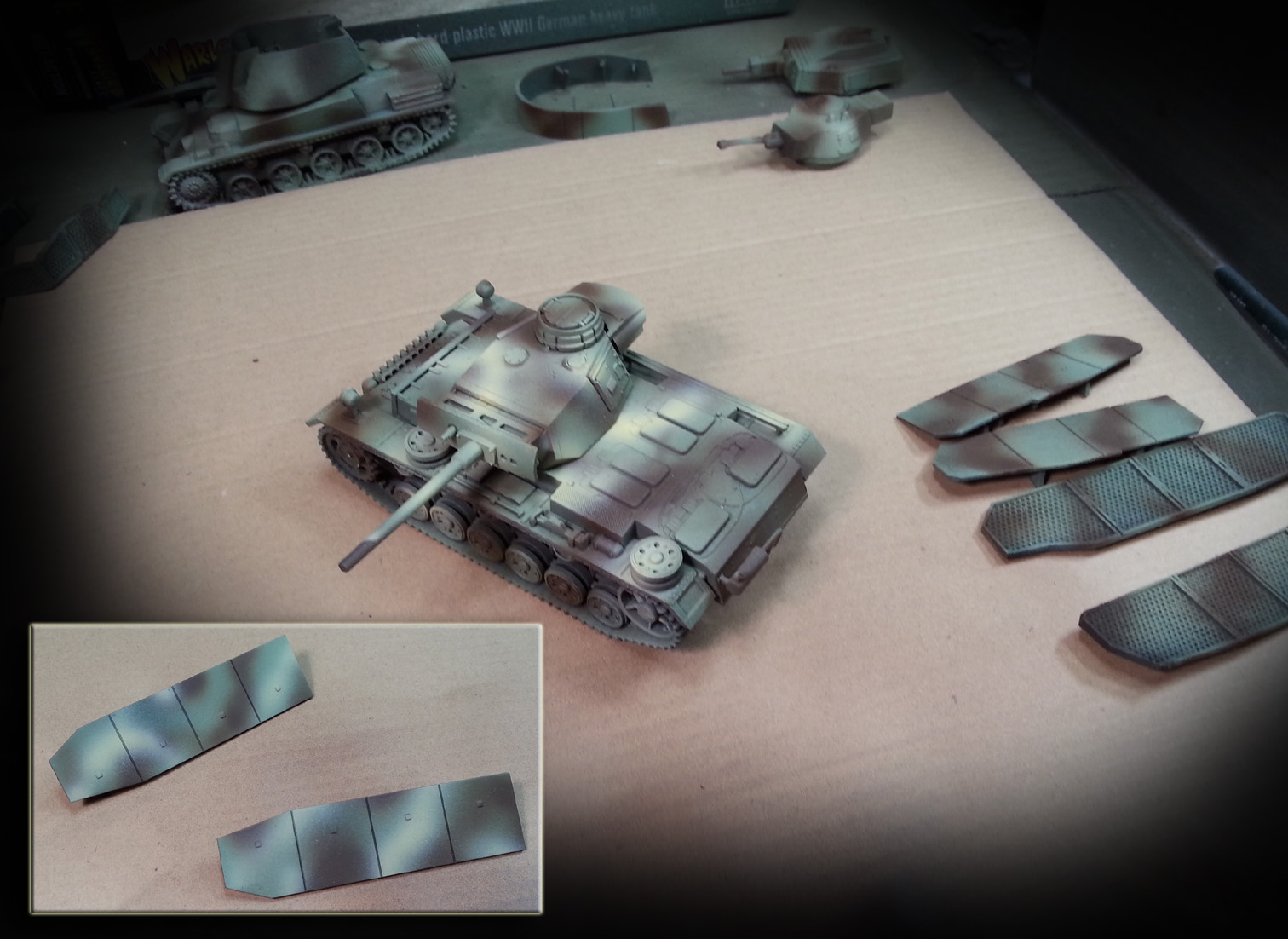 By reducing the pressure in the compressor (sometimes down to 10-15 PSI) and using the Badger Extreme Patriot brush, it is possible to get some nice tight runs of the airbrush into the spots I wanted. 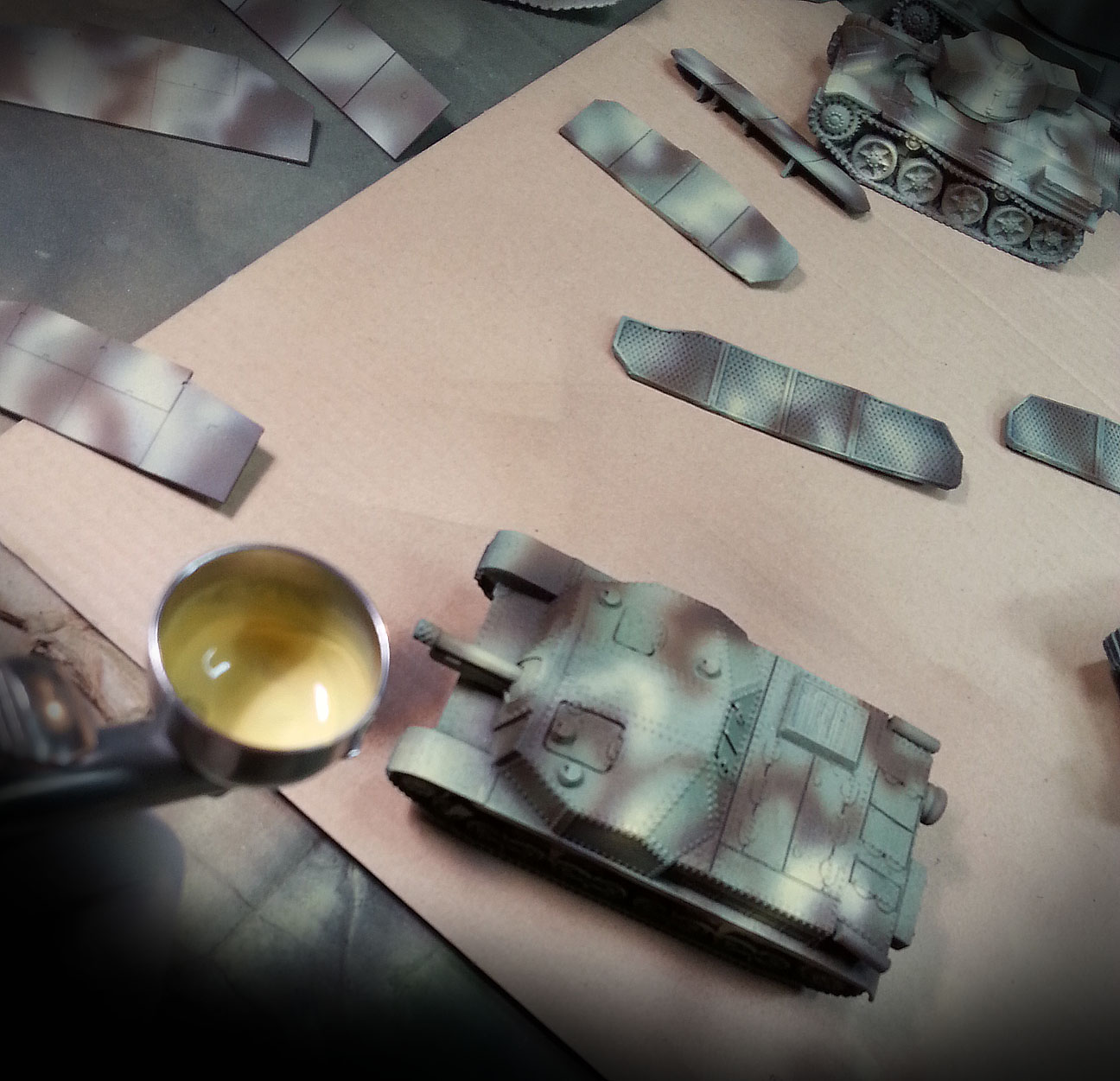 This picture focuses on the Hungarian vehicles.  The specific kits, such as the Nimrod, Toldi, Turan and Zryinyi kits are from Mad Bob's Miniatures, while the PZ 3 in the back is from Rubicon. 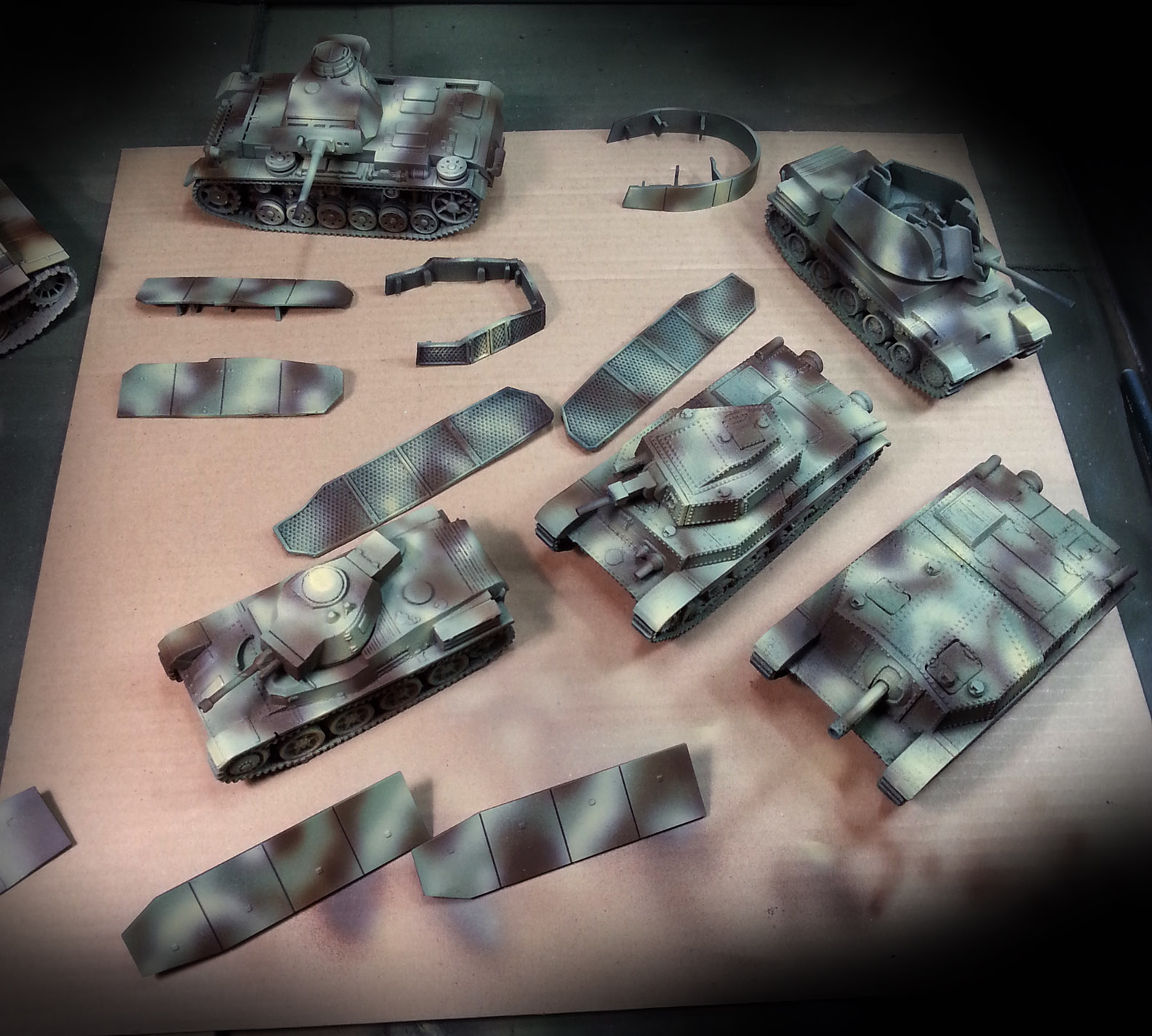 Let's reverse the process, putting the green part of the camo pattern on the Warlord Games Tiger and Stug.  Similar to the yellow, I will mix in a few deeper, darker greens with the green primer to do this color.

The primer not only adds extra stability to the paint as the vehicle is handled over and over again, but helps to thin the color down and allow it to flow more freely. 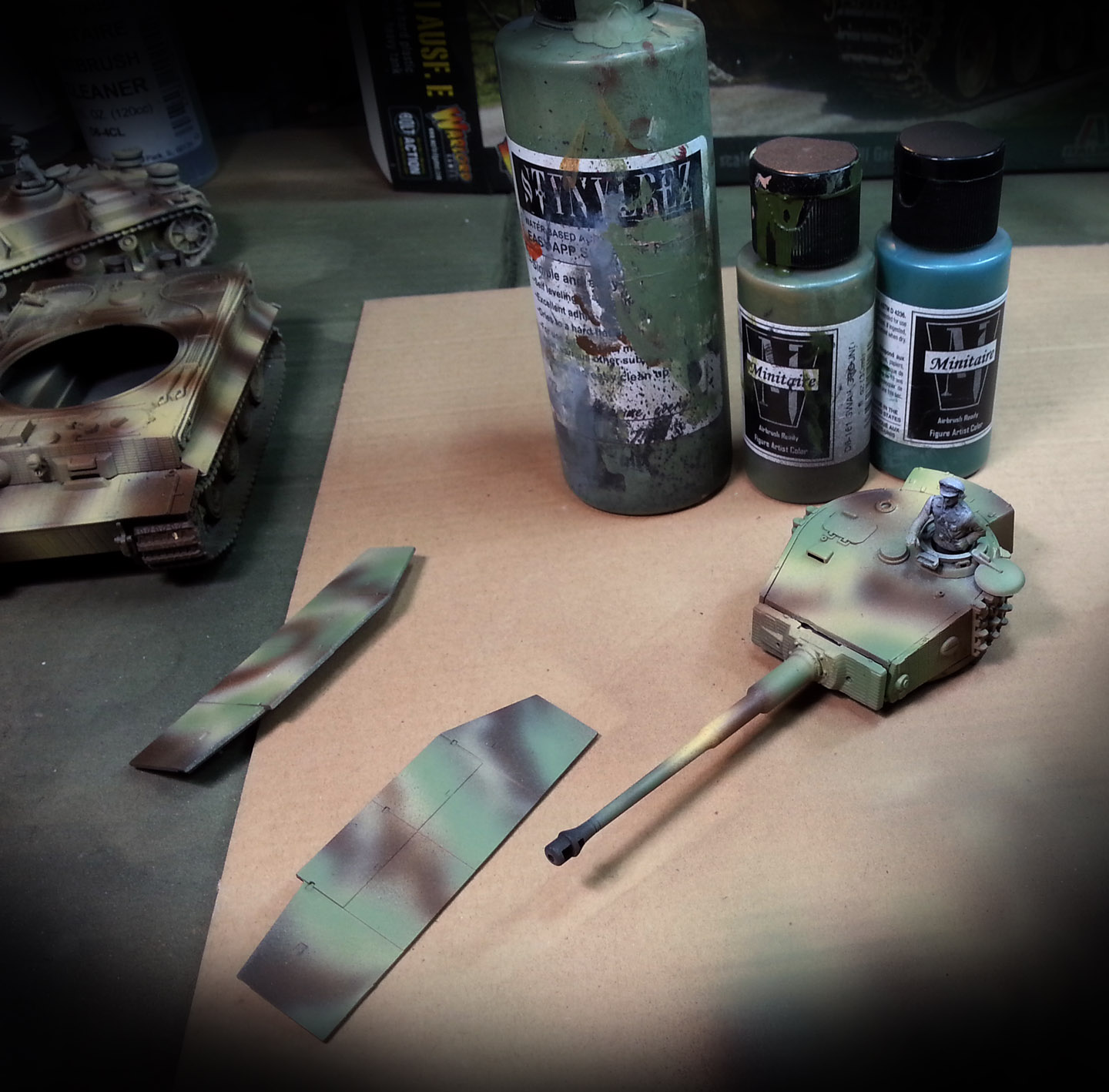 A comparison shot of the Stug, with green applied and the waiting Tiger. 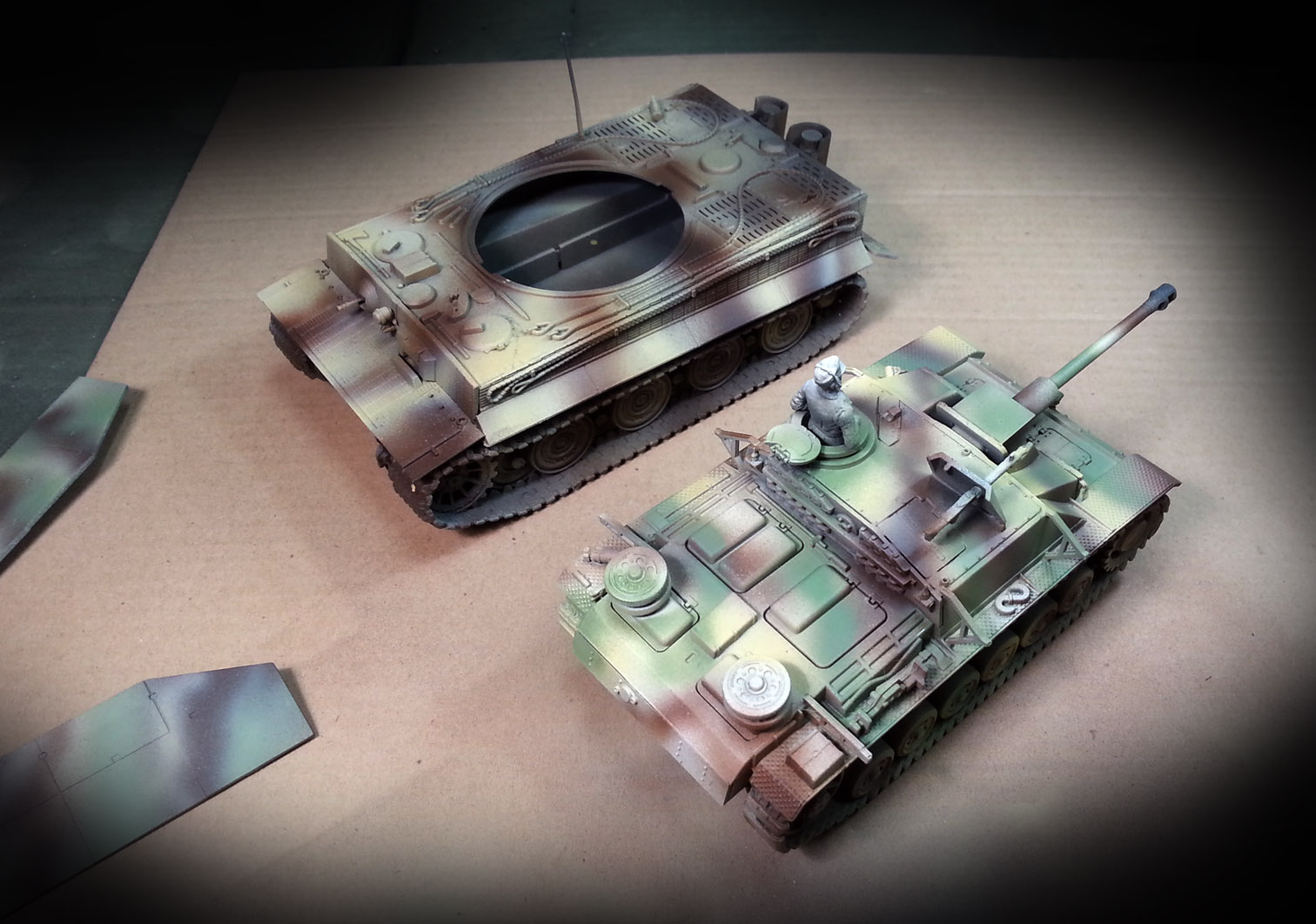 While I could have approached all the tanks in the same way, I wanted to give the German vehicles that extra touch of yellow.  This is why I stuck with using a yellow base for the Tiger and Stug.

The Hungarian tanks needed to be more greenish, even though most of the camo was of a similar color set to the German versions.

So, I started with a green base to push the entire camo set in that direction. 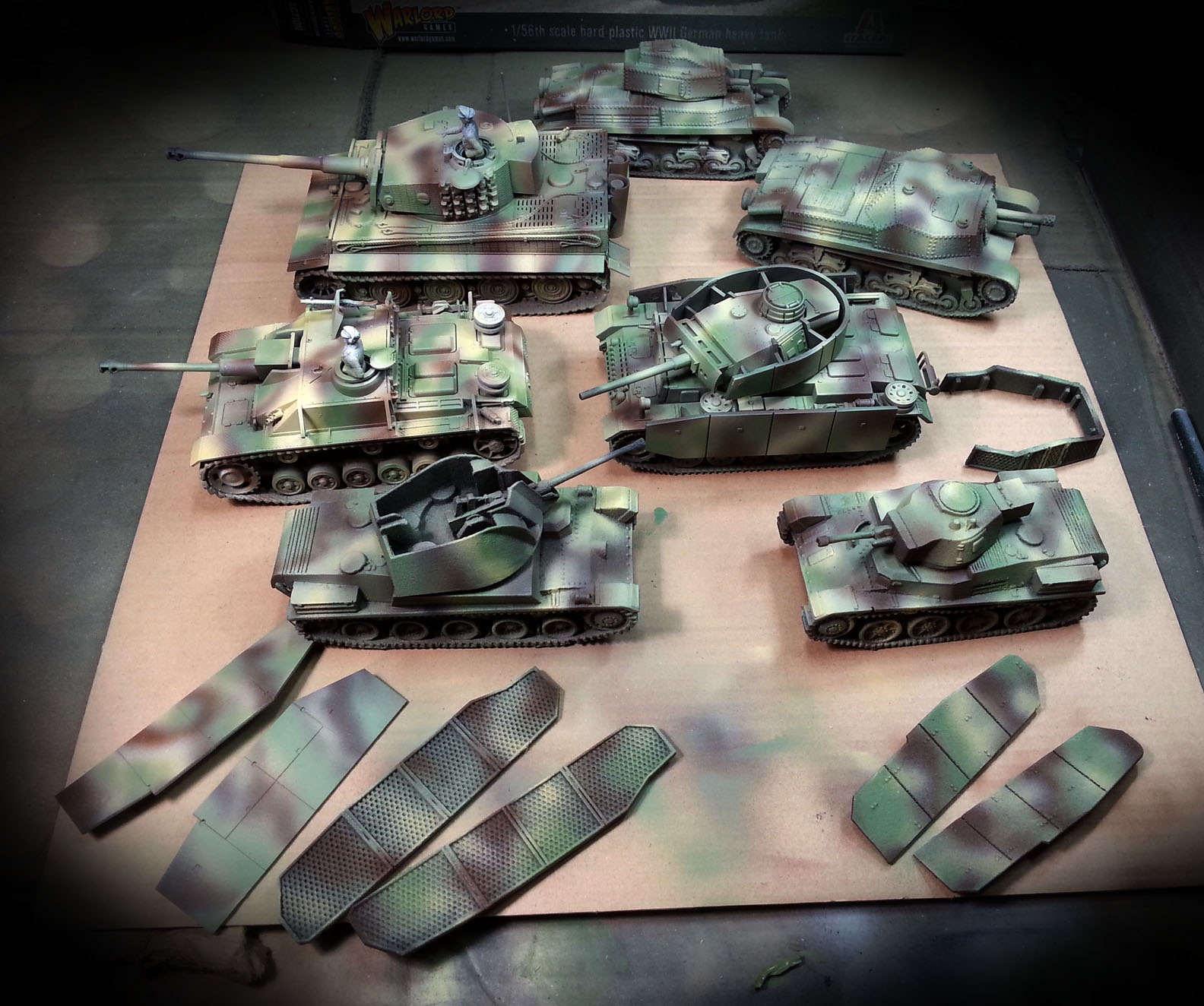 Experimentation time!  I wanted to see what a very light application of the Badger Ghost tints might do to the lighter colors, specifically the yellows.

While various Mig AMMO filters will be applied in stage 3, I was very curious to see if the Ghost Tints could darken and intensify the yellow part of the camo pattern. 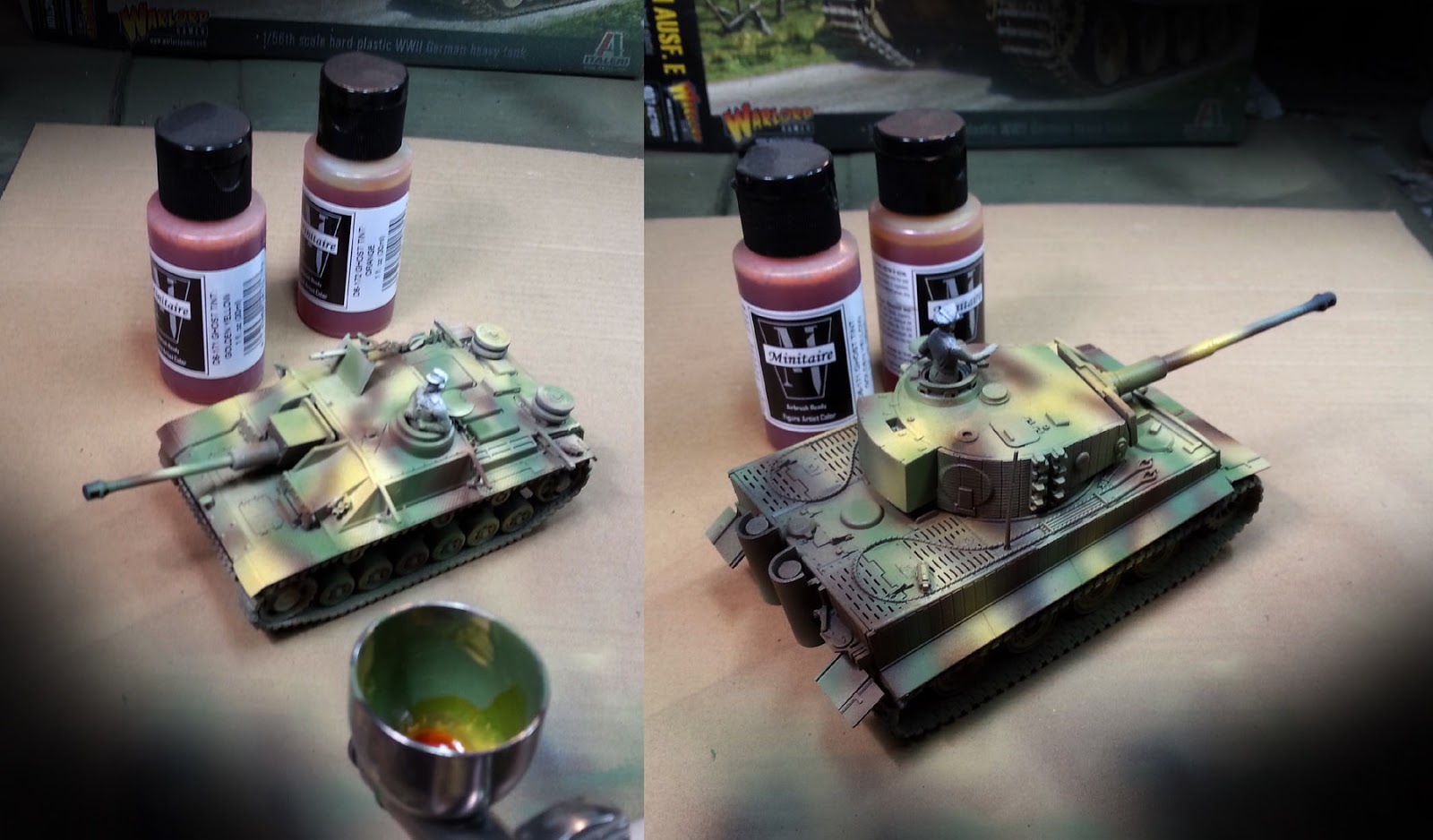 It only took a few shots of the Tints through the brush to know this was a good idea.  While having a marginal effect on the brown and green sections, the yellow parts really came to life! 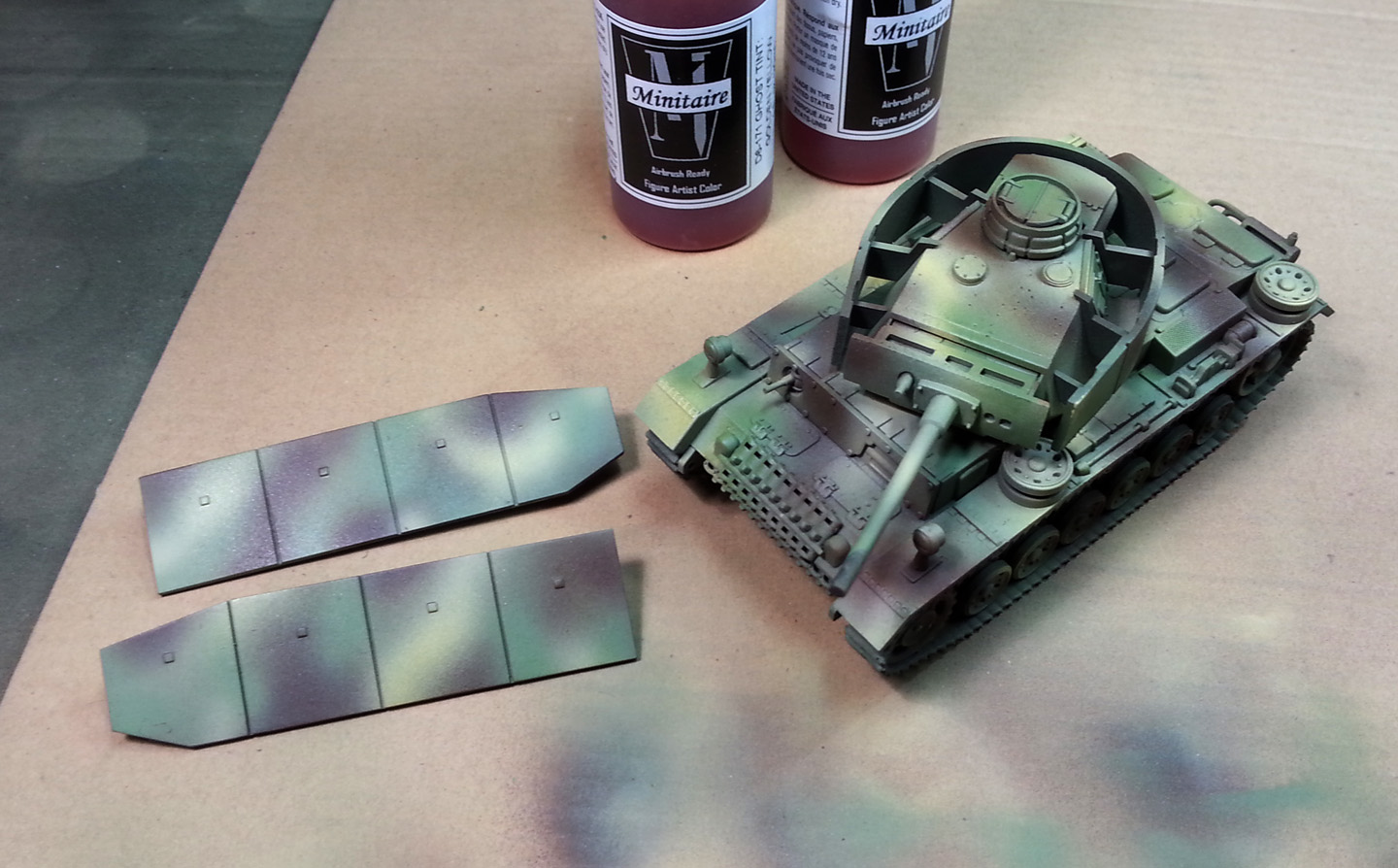 I did this to all of the tanks, and called that particular experiment a great success.

In Part Three, I will get into the initial application of the oil based products, such as the filters.  Darker washes and glazes will be used to establish the shading in full.

Part Four will feature the decals, weathering and other special effects, so stay tuned! 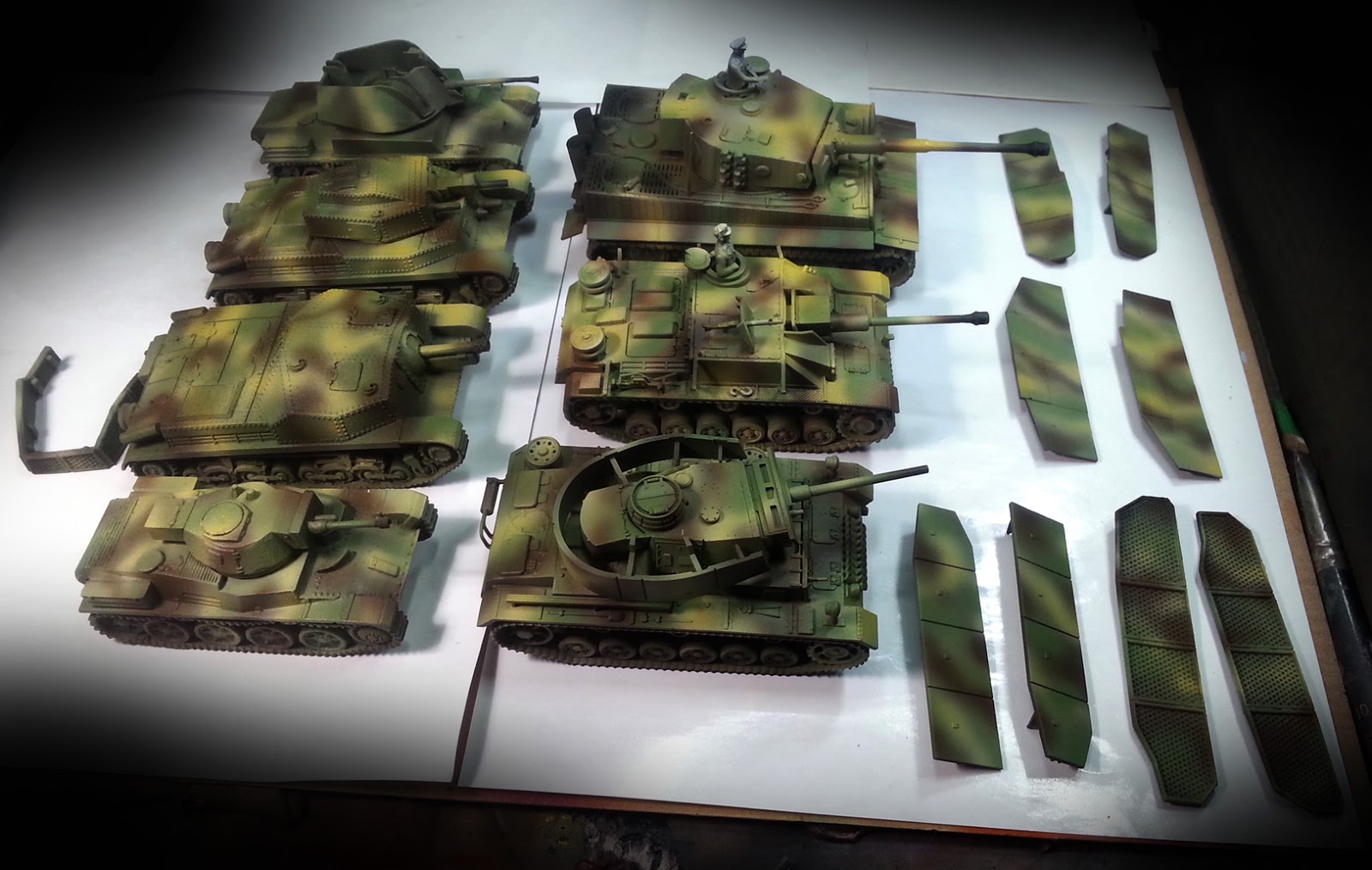