Pink foam to the rescue!!! 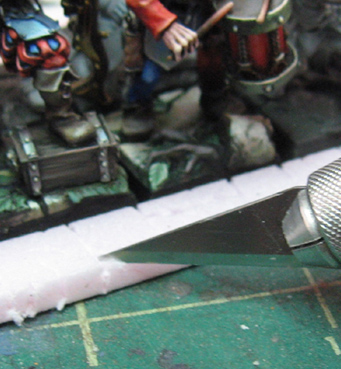 Well, today was an interesting day.  I needed to create a movement tray for that unit of Forgeworld Empire that I have been working on.  This was important, since I needed to attempt to rank them up before I tried to put them on their bases.

I knew that they were going to be difficult to rank up, even more so when you include the command figures.

No big deal, I thought.  I will just break out some sculpey and some matboard...

Well, it turns out that I needed two things to proceed.  Some new Sculpey and a working oven.  Since I didn't have either of those things, I had to figure out something else on the fly.

I remembered how much fun and success I had with the pink foam on the Fortress Falls army board.  Could I somehow manipulate that material in the same way that I could my trusty sculpey?

First, I got out my exacto knives and started shaving down pieces of pink foam. 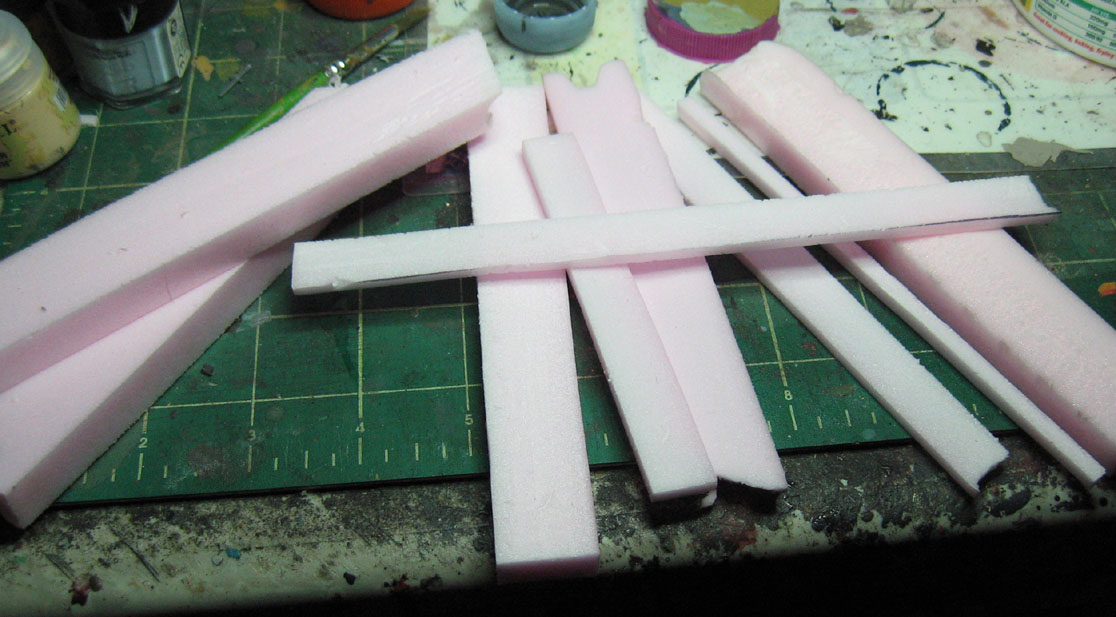 Here is the unit, ranked up as best as I could get them.  It took a lot of moving guys around!

You may recognize some of the figures from recent posts...

I wanted some stronger magnetic hold, so I got a sheet of magnetized sheet metal.  It's important to make sure that is what you purchased, as I discovered the hard way.  Always have a magnet with you in the store!!

Cathy reminded me that we used to make all kinds of Blood Bowl fields by taking pink foam and putting stone textures into it!

Those pieces of foam you saw in the earlier photo were cut into very specific shapes... 3/16 inch wide by 1/16 thick.  I glued them into place, and then carved/pressed in some floor texture with carving tools to match the bases.

Finally, I cut away bits of the stones with the exacto knife to make some serious weathering... 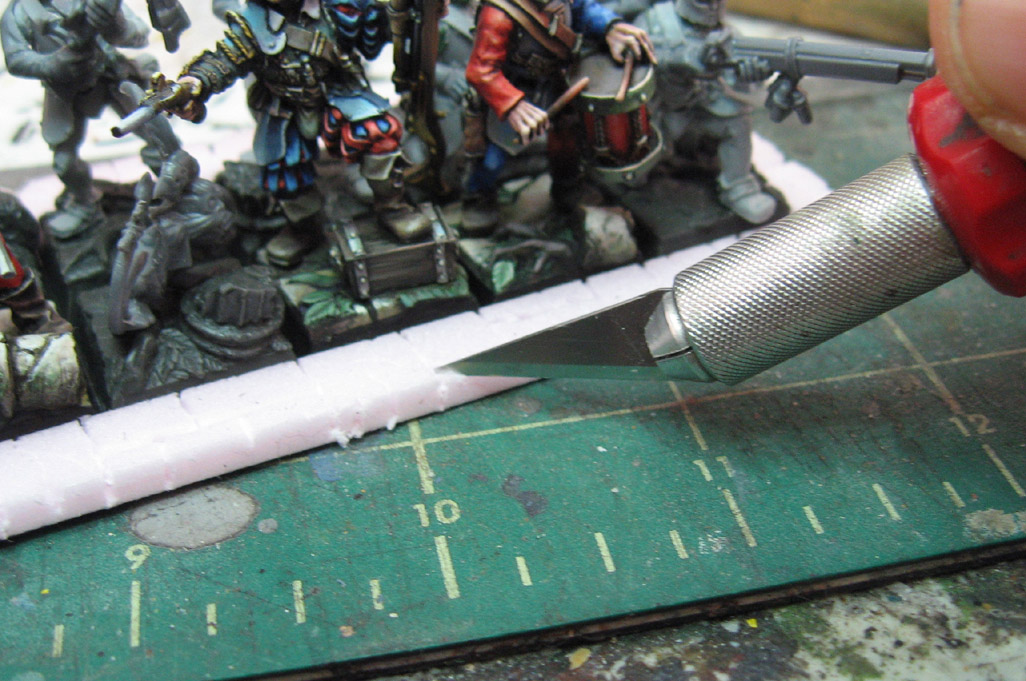 Here you see some pillars which were also made from the foam.  I took rectangles and carved/sanded them into pillars!  Once all that was done, I had to find a way to 'seal' the foam, and make it stronger.  Otherwise, any pressure at all would damage it.  We have learned that wood glue or stronger formula Elmer's glue is perfect for this task! 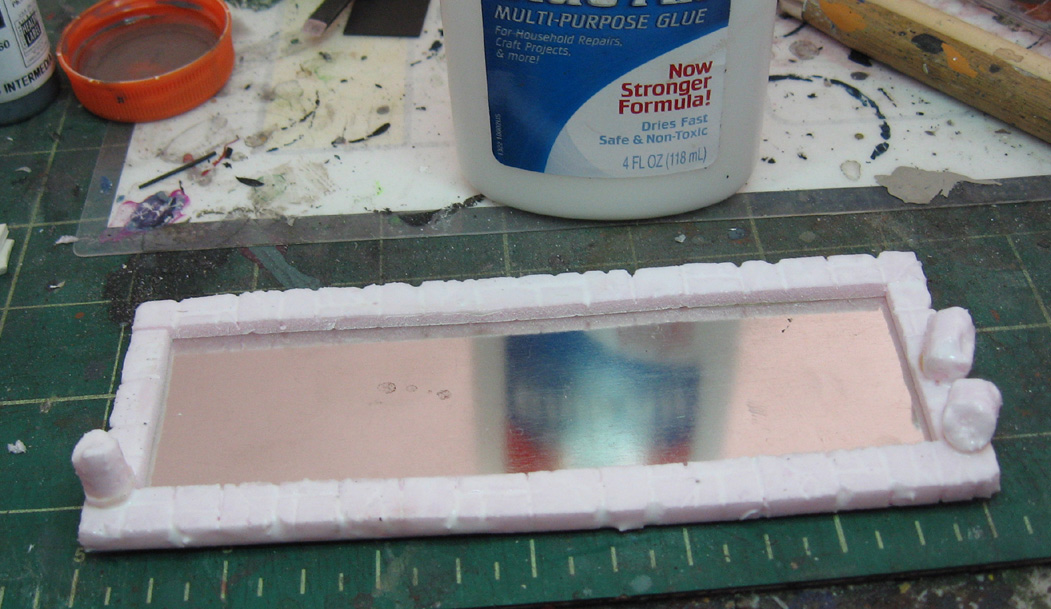 After that dried, it was time to sculpt some vines and leaves like the ones on the bases. 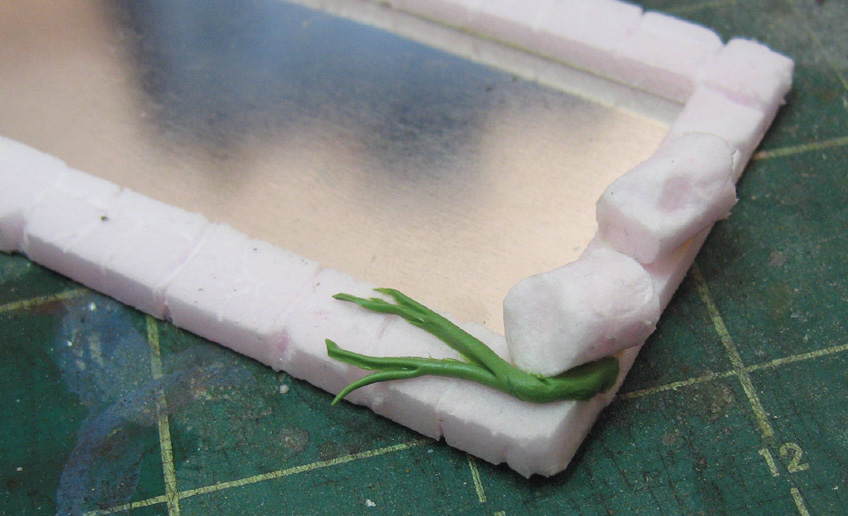 I let all this set up, and then it was time to paint it!  Stay tuned for the exciting conclusion of an exercise in Plan B!!

Here she is... Miss Underdark? Vestal one finished 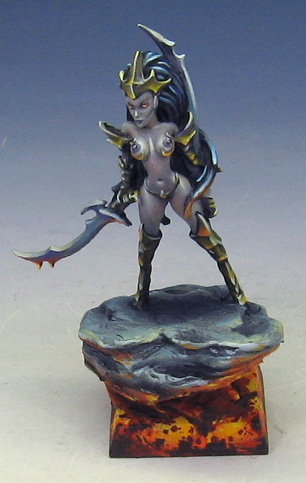 Here are a few pictures of the completed Vestal from Raging Heroes.  I am working on a drow version now, so later tonight I should be posting images of the step by step! 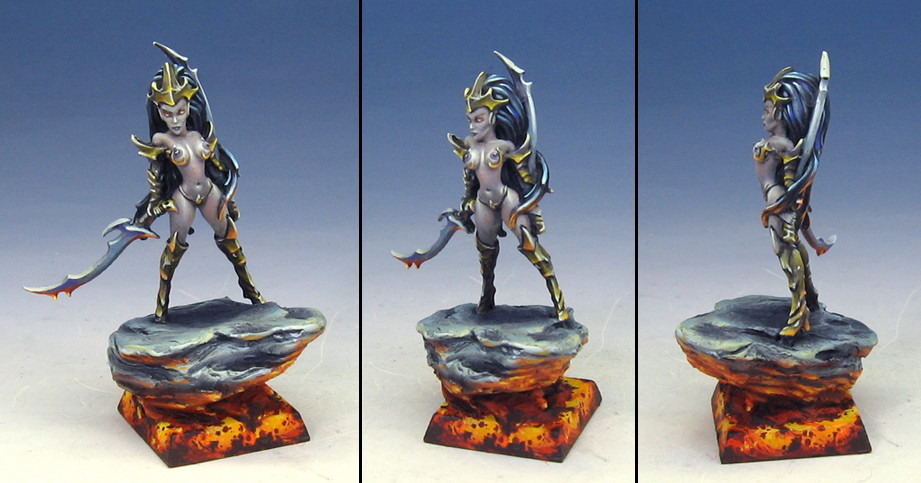 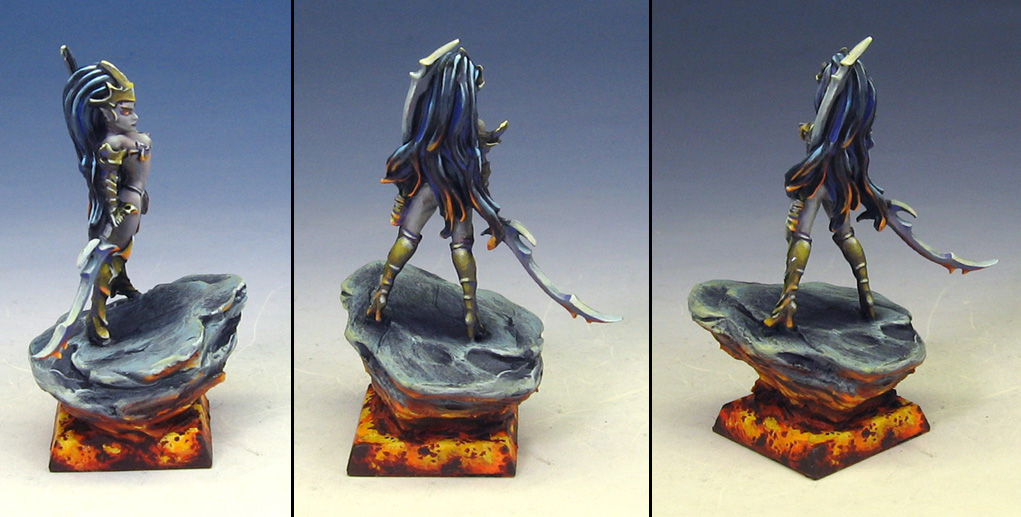 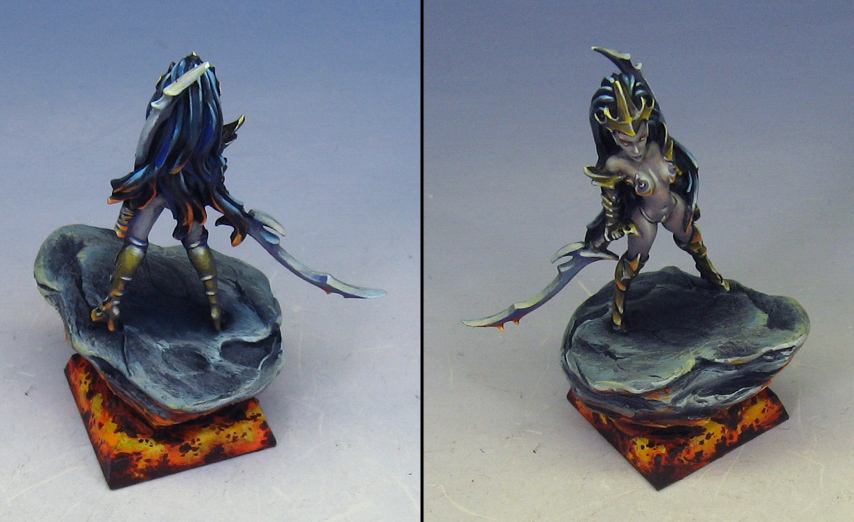 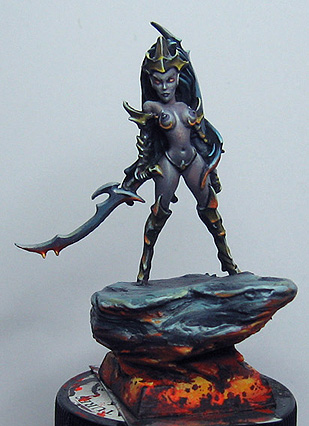 With the lava base complete, it was time to get down to some flesh tones!  For this experiment, I wanted to try out a variation of the usual Dark Elf lightflesh/black hair combo.

The flesh is not as bright as you usually see in GW publications.  I wanted this to be a little darker, so that I could reflect a bit more of the lava glow in it.

These Vestals will be the subject of numerous painting DVD's in our Kickstarter program.

I used a blue/black mix to establish the darks of the hair and the armor...

The armor was a mix of snakebite leather and that blue/black. 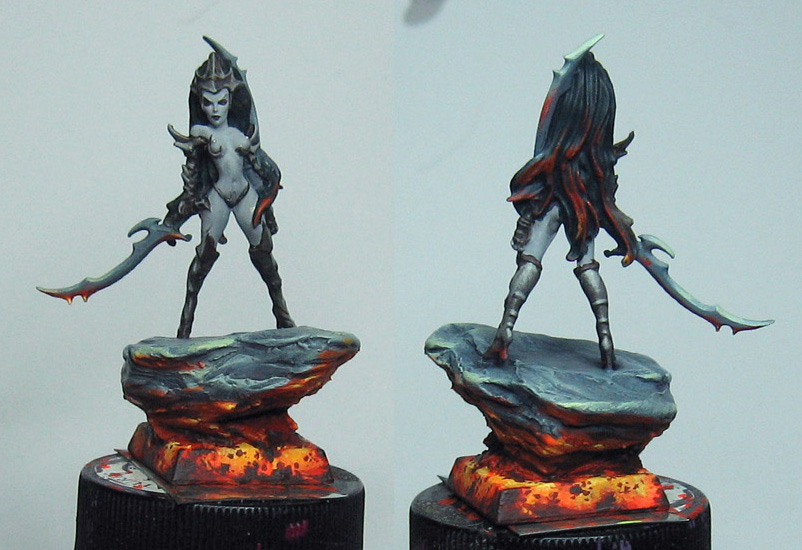 I started to 'flesh out' the flesh tone by using a watered down Reare Ashen Brown.  This would help me establish where the darks would be.  The hair had a lightening color of blue/black and bright sky blue.  That same color is also applied to parts of the weapons. 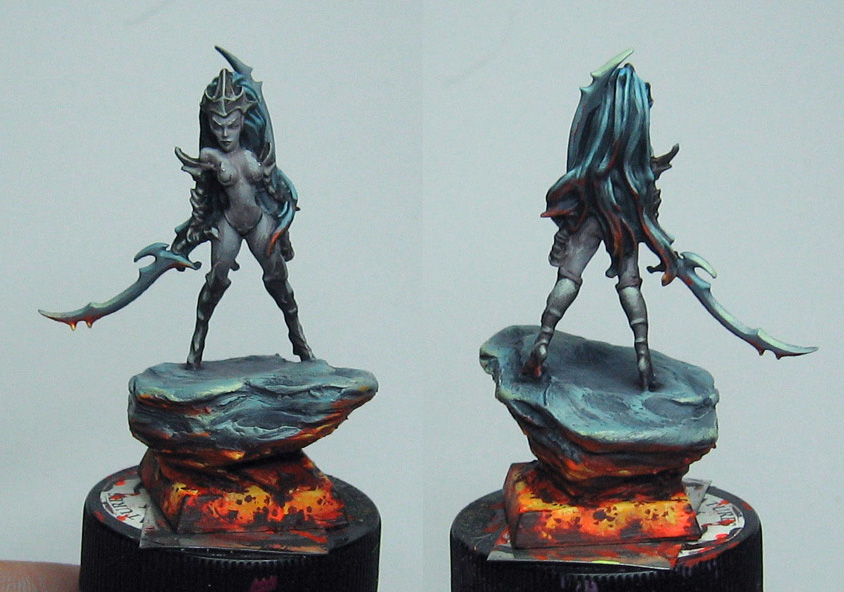 I mixed a little bit of Vallejo brown rose with the ashen brown, which made my warmest color.  I also mixed a bit of lavender in with this.  I used flow improver to keep the colors in a better state for mixing on the figure. 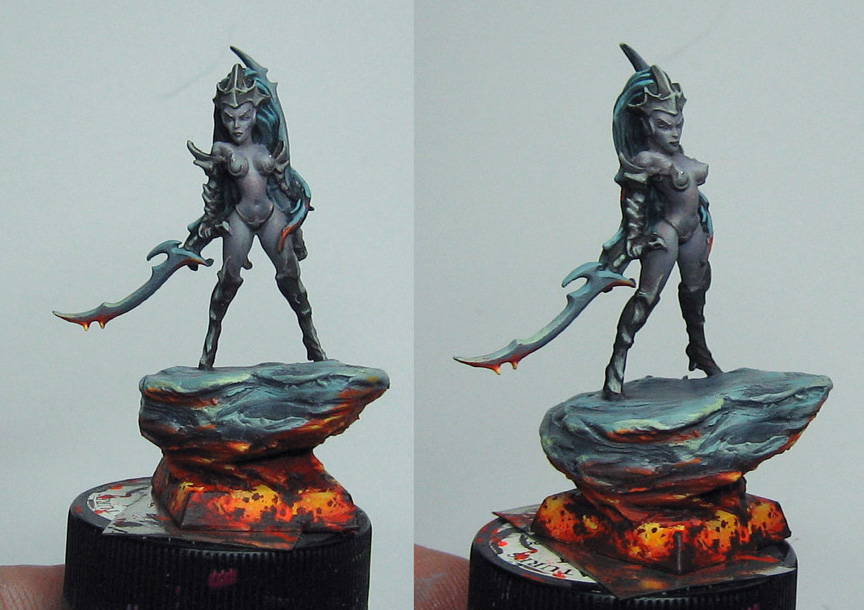 I took my panzer aces highlight green and mixed that with the more rosy flesh tone.  That cooled down the surfaces facing away from the lava, which would be very important!  This would become my highlight tone as well.  So, I kept mixing more of the highlight green into that shade. 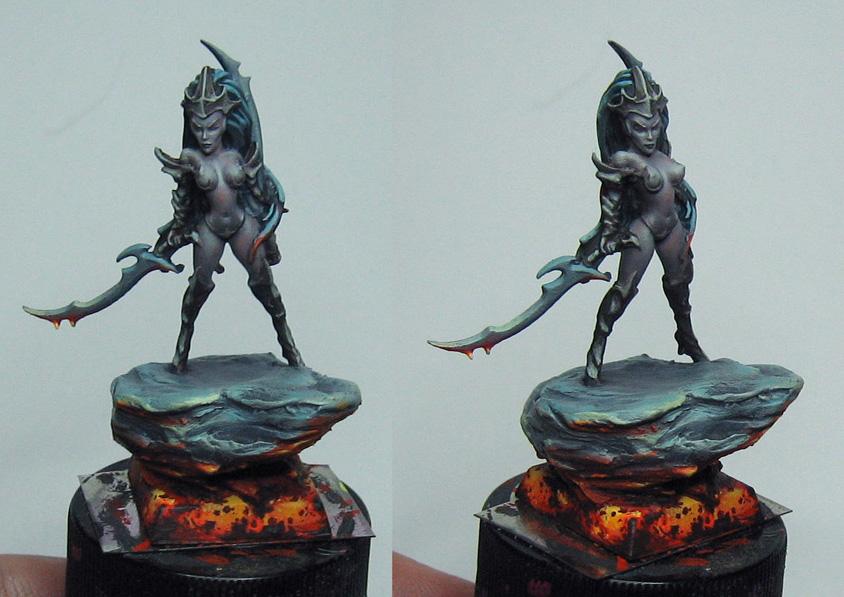 I mixed a space wolves grey into that color to further lighten it.  You can see that I did some more work on the armor as well.  These flesh colors were mixed in with the snakebite leather to make it lighter. 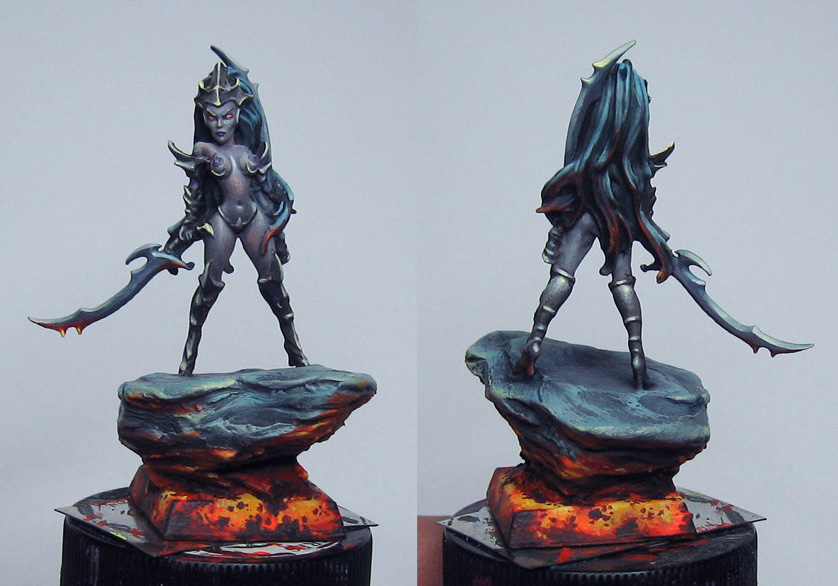 I get more definition on the armor by mixing a little yellow in that mix.  It is surprisingly cool by comparison, which is good.  I am also working on the darker shades of the weapons.  I put some glowing eyes on her for fun, and to tie in with the lava effect! 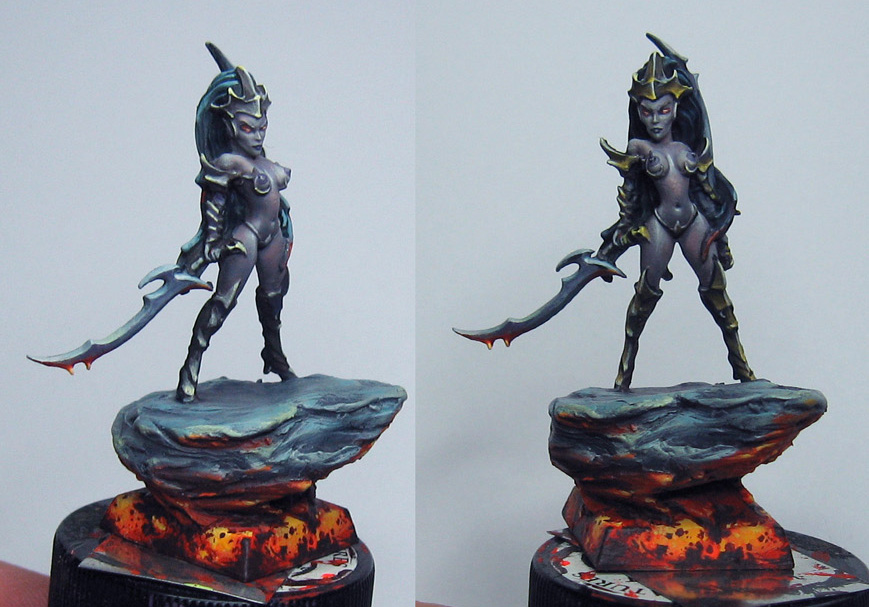 Final highlights are picked out on the weapons, the armor and the hair.  I went back in with some dark purple in the shadow sections of the hair for a little contrast.  That same color was thinned down and used for the darkest shades of the swords as well. 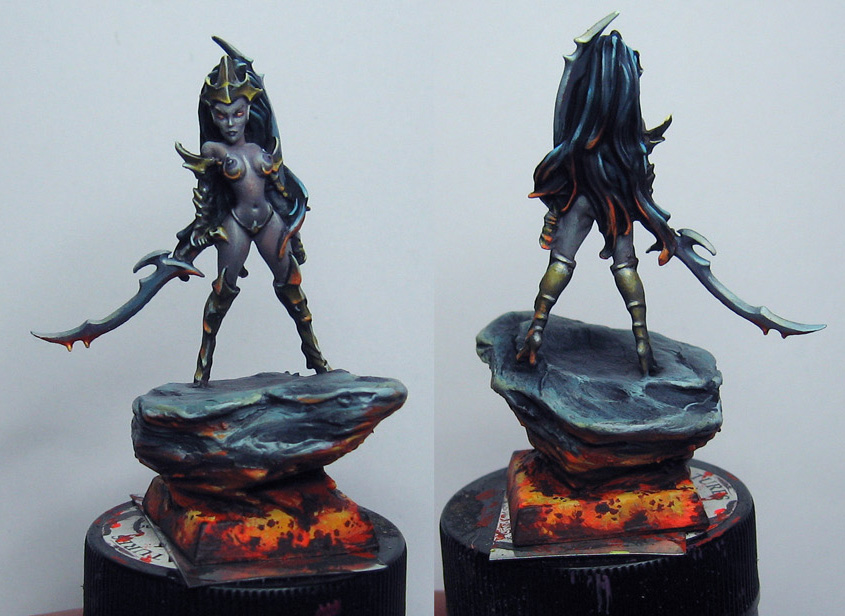