Paint on a base 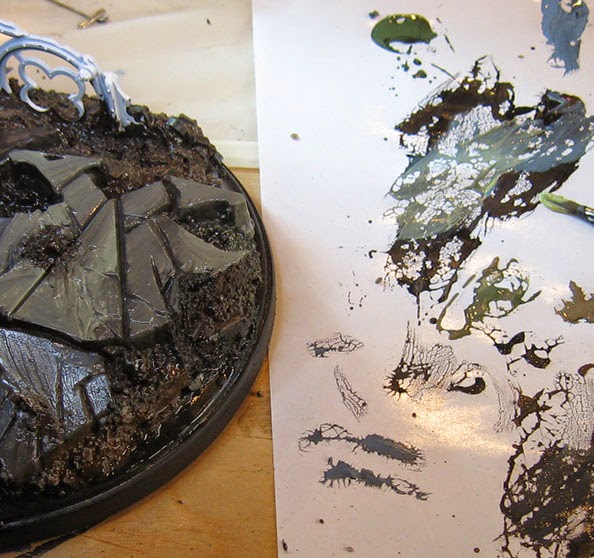 Remember the huge plaque base for the greater demon?  Yes, it's about time it got some paint! 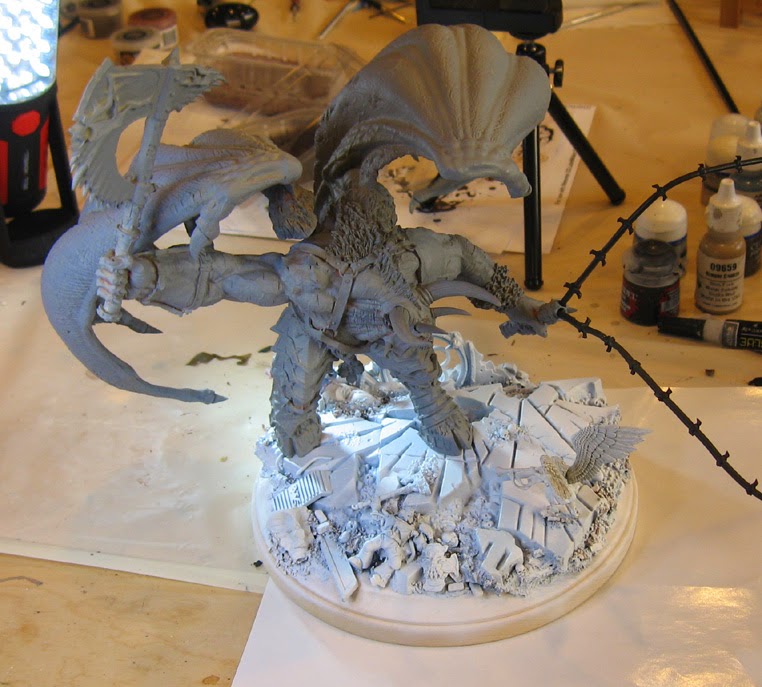 The primed base, which already looks very different from the original kaleidoscope.

Normally, I would 'primer paint' this using blacks, greens and reds, but we shall see what we can do with the white primer. 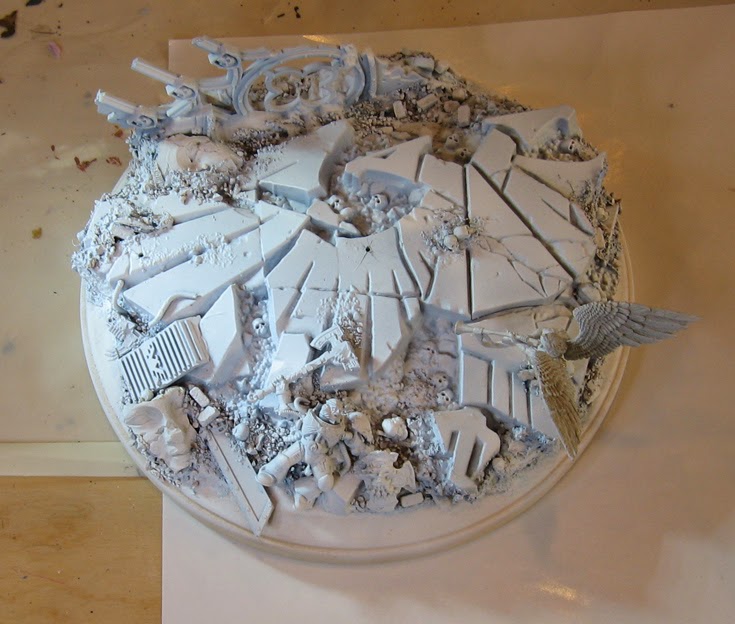 To the right, we have some of the #8 rounds, and to the left is a set of cheap synthetics that were on clearance.

It's a collection of flats, filberts, fans, and so on.  They will be mostly used for terrain and other large scale projects. 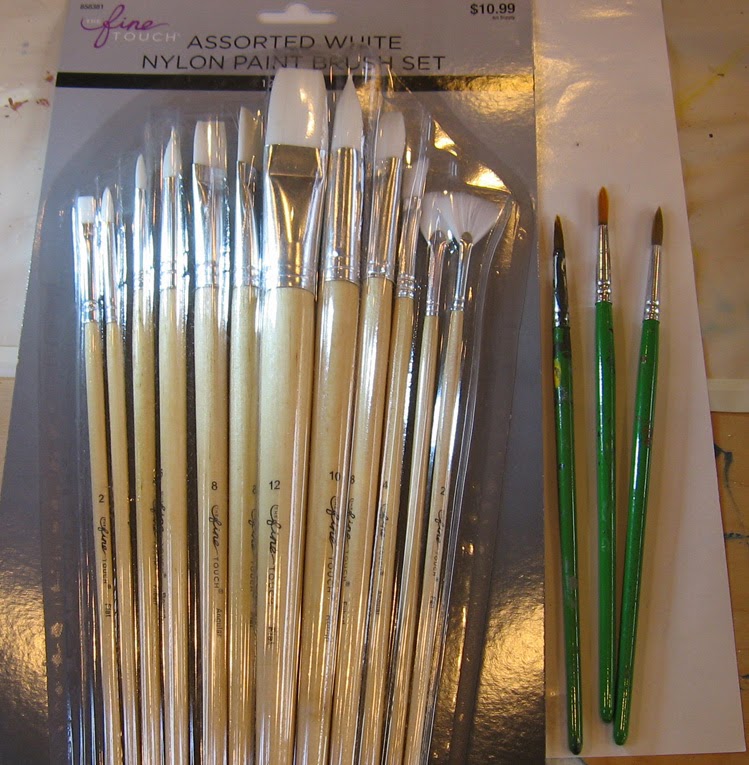 An array of colors out on the palette, specifically designed to create warmer and cooler grays by mixing them with black. 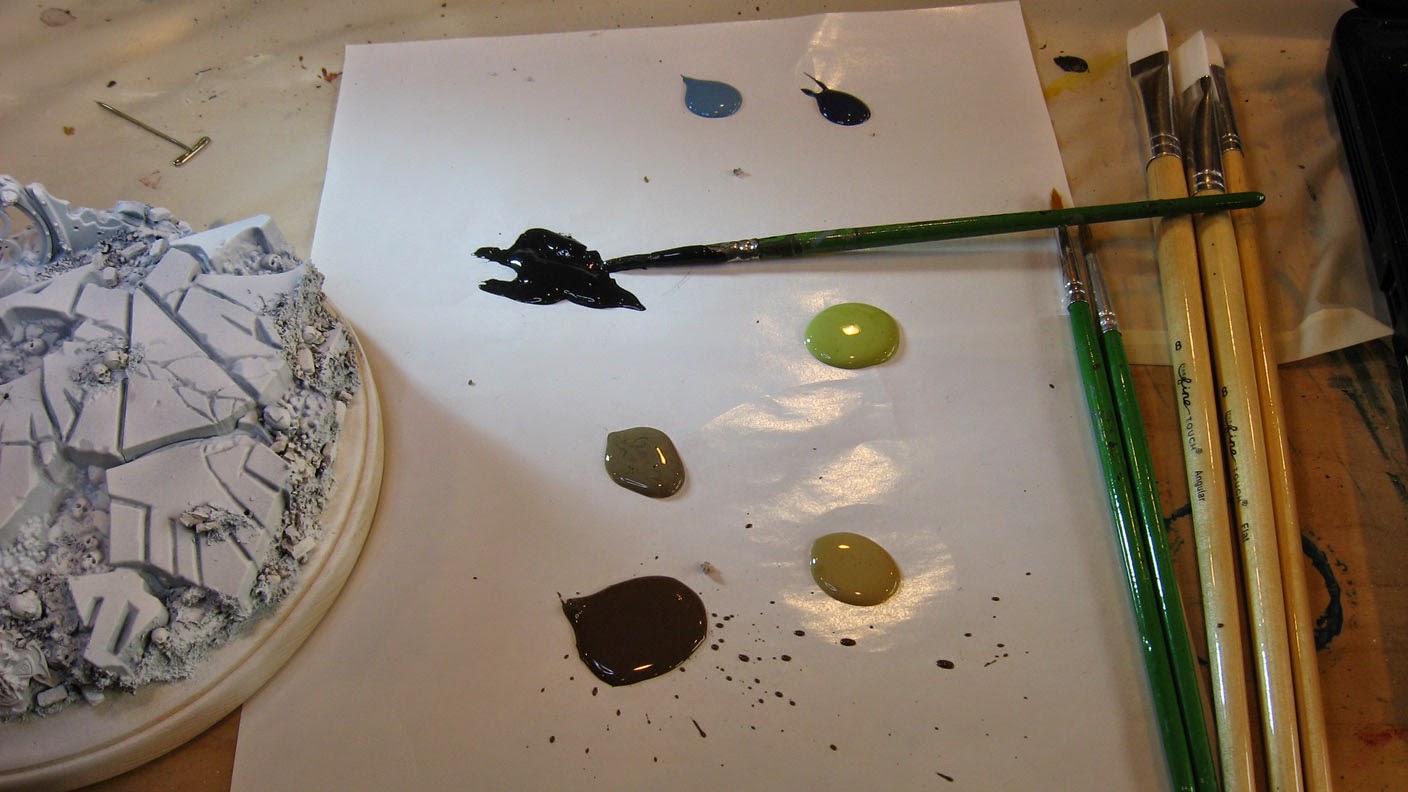 Here's one mix in action... reddish brown and black.  Notice that I am employing the "negative painting" approach, which means painting darker areas around the light colors that I want to save for later. 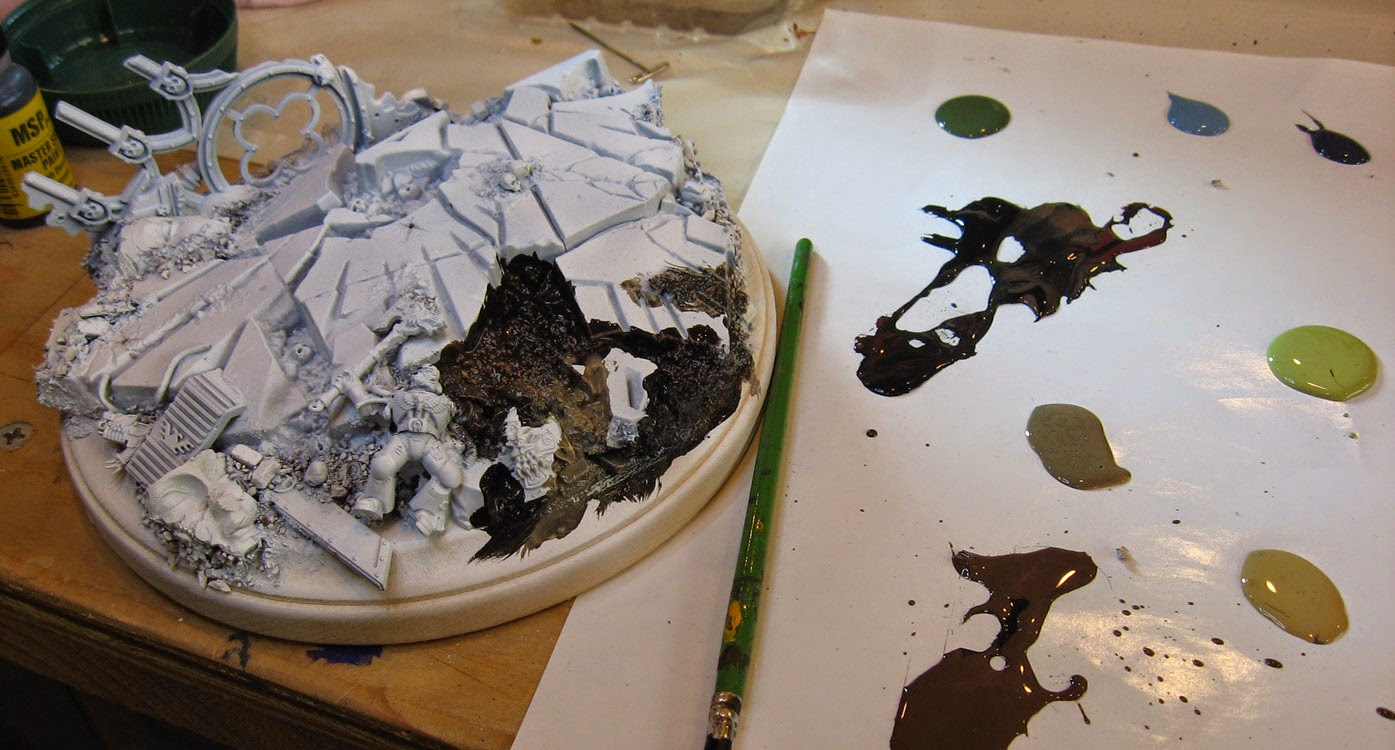 As I move around this area, you can see that I am altering the colors, switching from more of a greenish look back to the brown, and so on.  This gets a lot more interesting variety in those darker areas. 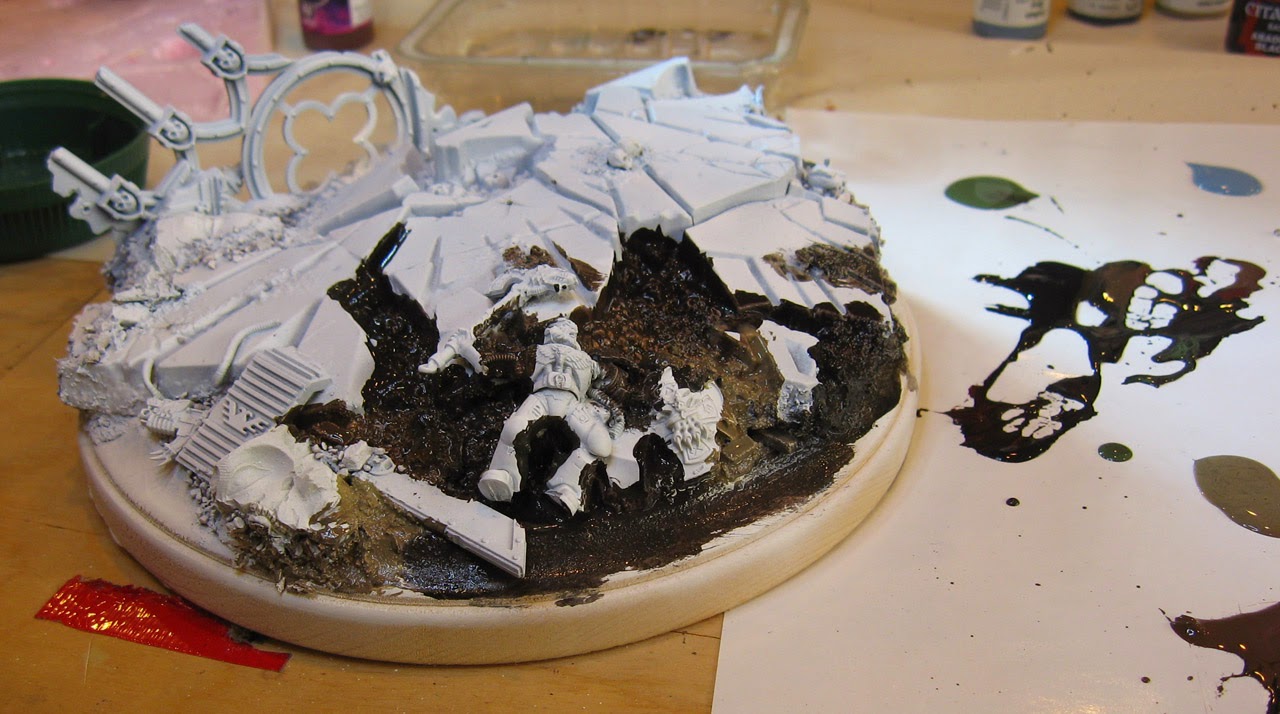 I don't even mix the colors entirely, opting for "marbelization".  I will allow these swirls of colors to flow randomly across the surface. 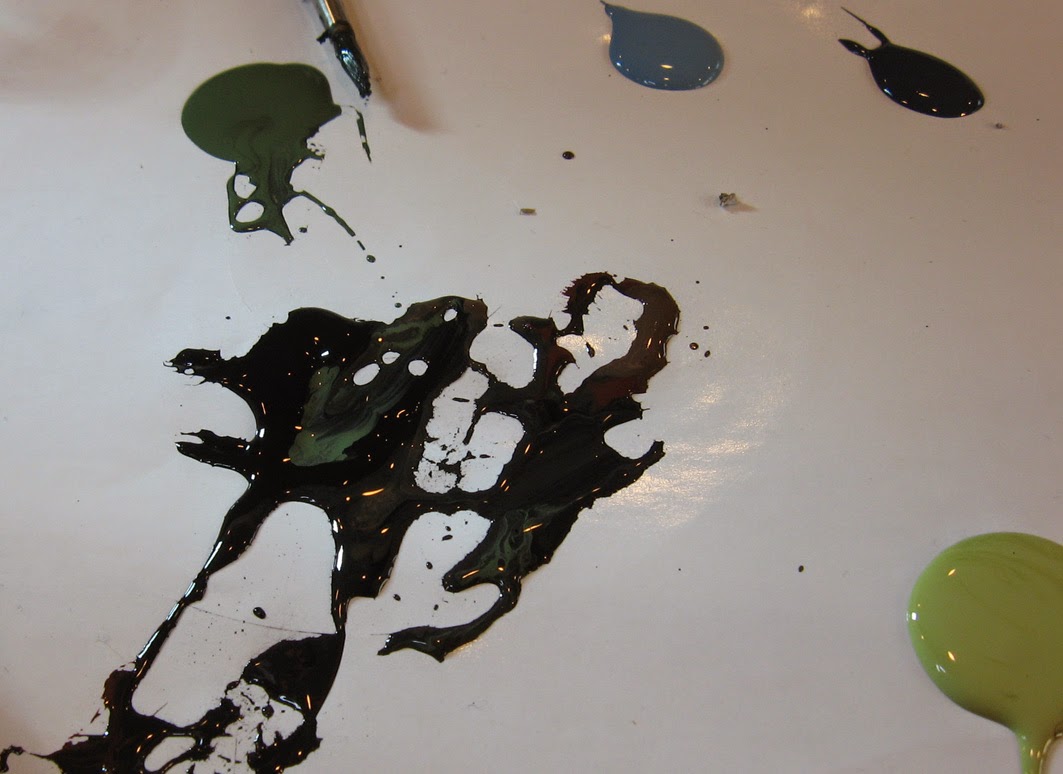 Another look at establishing that all important value pattern.  If I plan out the darker areas quickly, I will actually be able to mix my lighter colors with them! 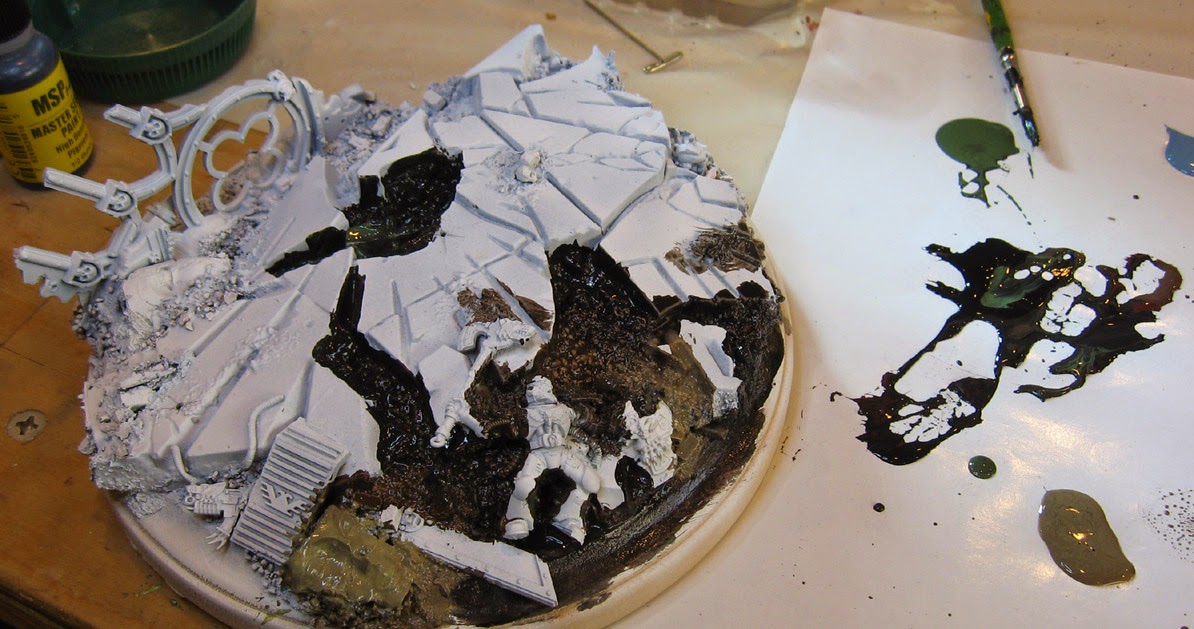 Here's a nice close up example of this on site mixing.  You can see the greenish colors to the left, and the reddish browns to the right... blending freely on their own. 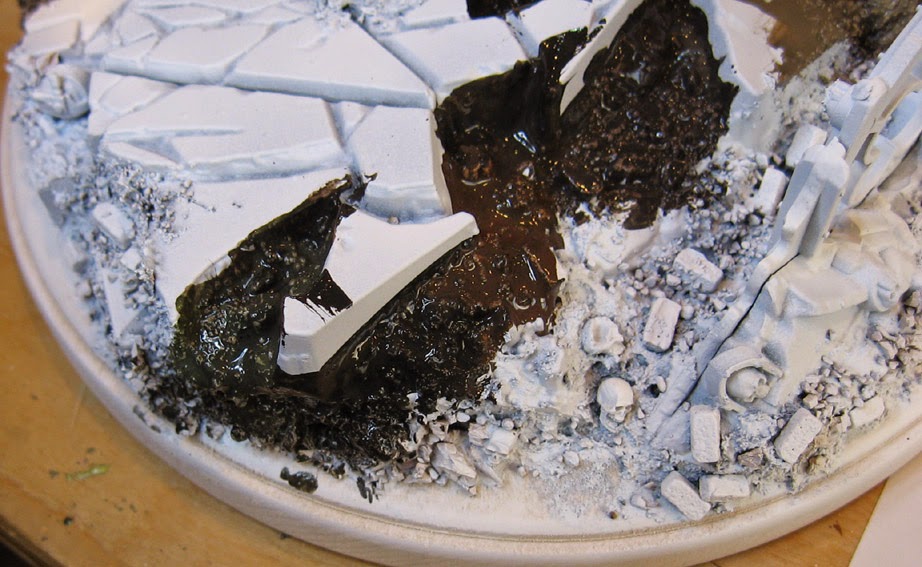 As you can see, it's just a matter of working my way around the base, leaving the lighter areas for later.

At this point, I start to pull some of those darker colors onto the upper surfaces of the stone, so that I can do some wet into wet blending! 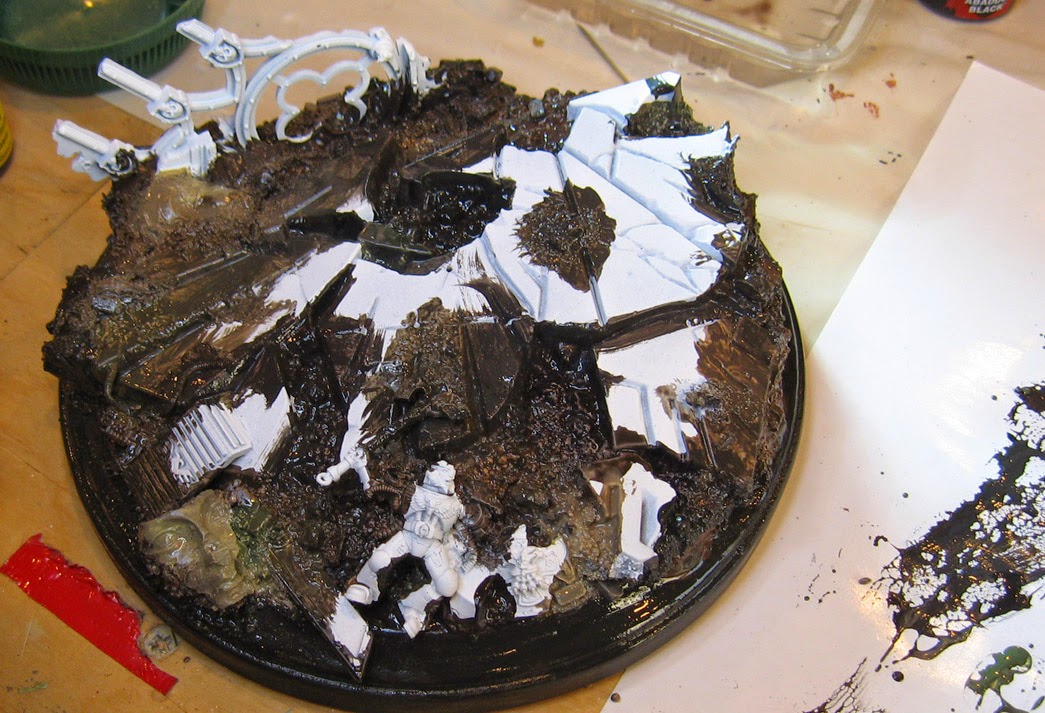 Some cerulean, or sky blue, is mixed in with the original black/brown colors.  Once again, it is allowed to have the marble effect. 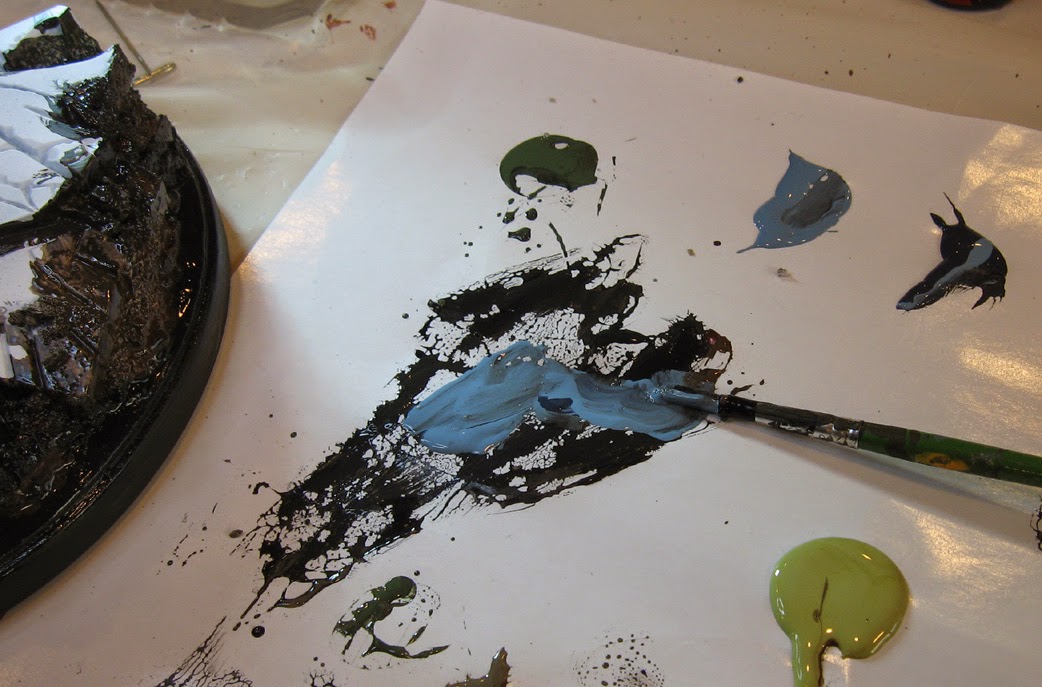 Moving fast and furious, mixing and scumbling the paint together. 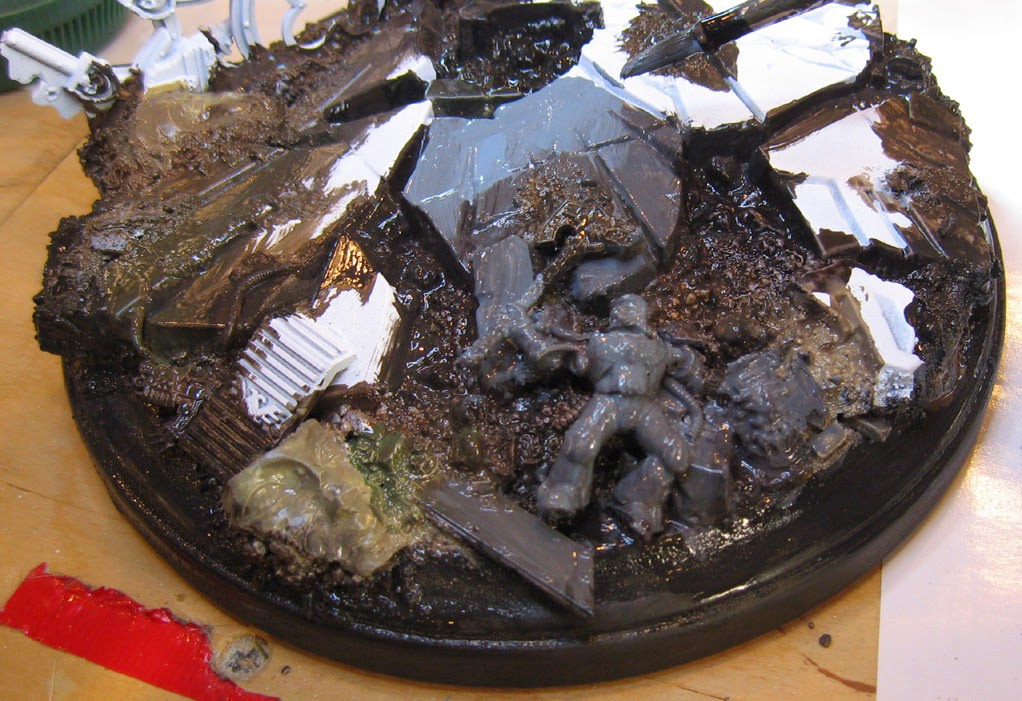 This final image gives you a hint of what's to come... more blending as I work on those upper surfaces.  Stay tuned for the next episode!!!

Posted by wappellious at 9:37 PM 9 comments:

Welcome to the Big House 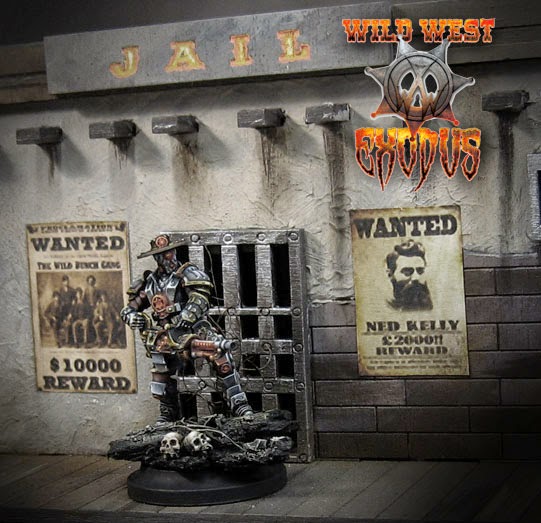 Everyone's favorite UR-31 Lawbot invites you to step inside the Alcatraz of Wappelville. 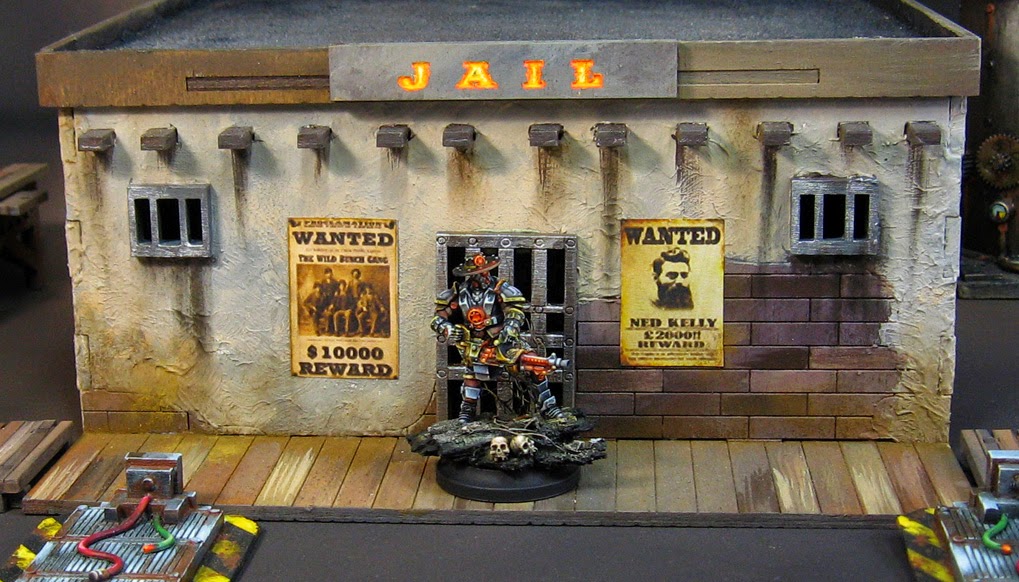 Should you find yourself a guest of this particular institution, you will be processed quickly, and shown some of the other attractions on the grounds. 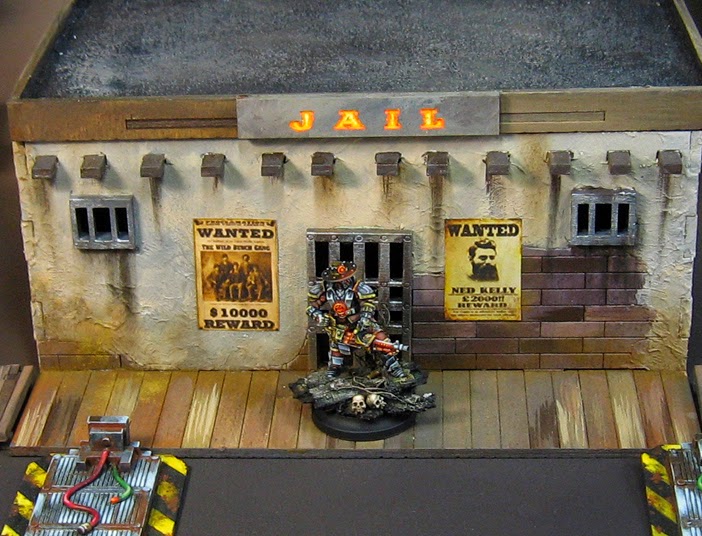 The Copelie Sisters are frequently found at the Law Chateau these days... 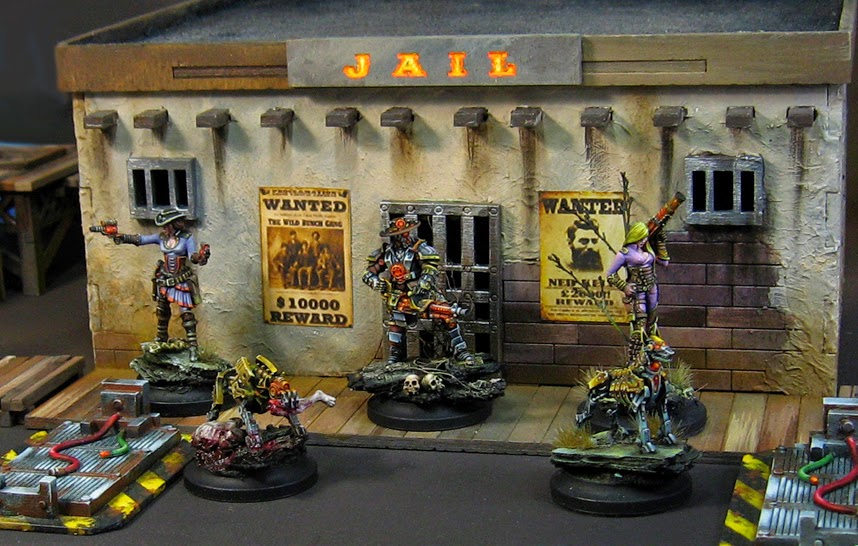 Their little pups are never far behind! 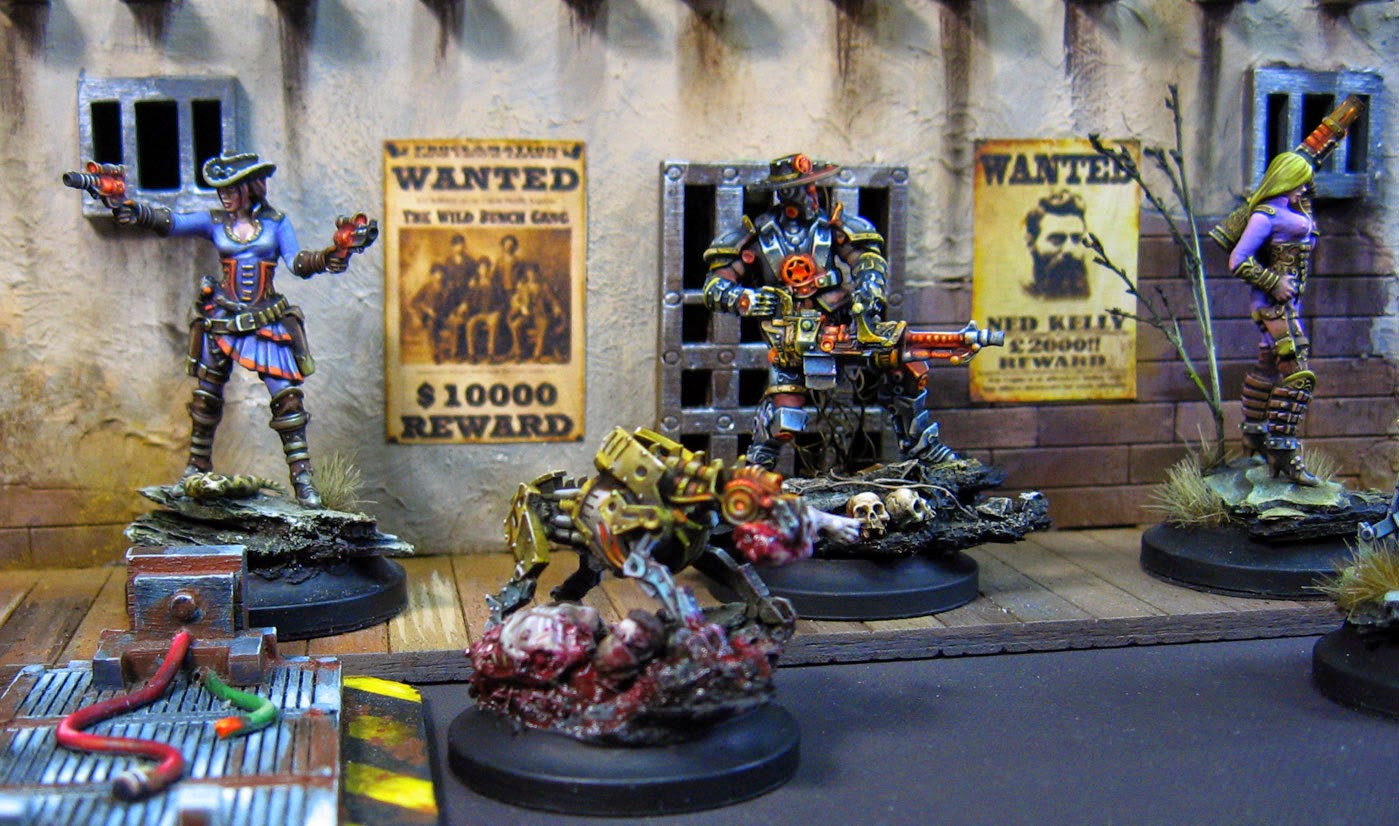 It looks like I will be using the Copelie Sisters and the dogs as my Crystal Brush fantasy/steampunk unit.  I figured... why not? 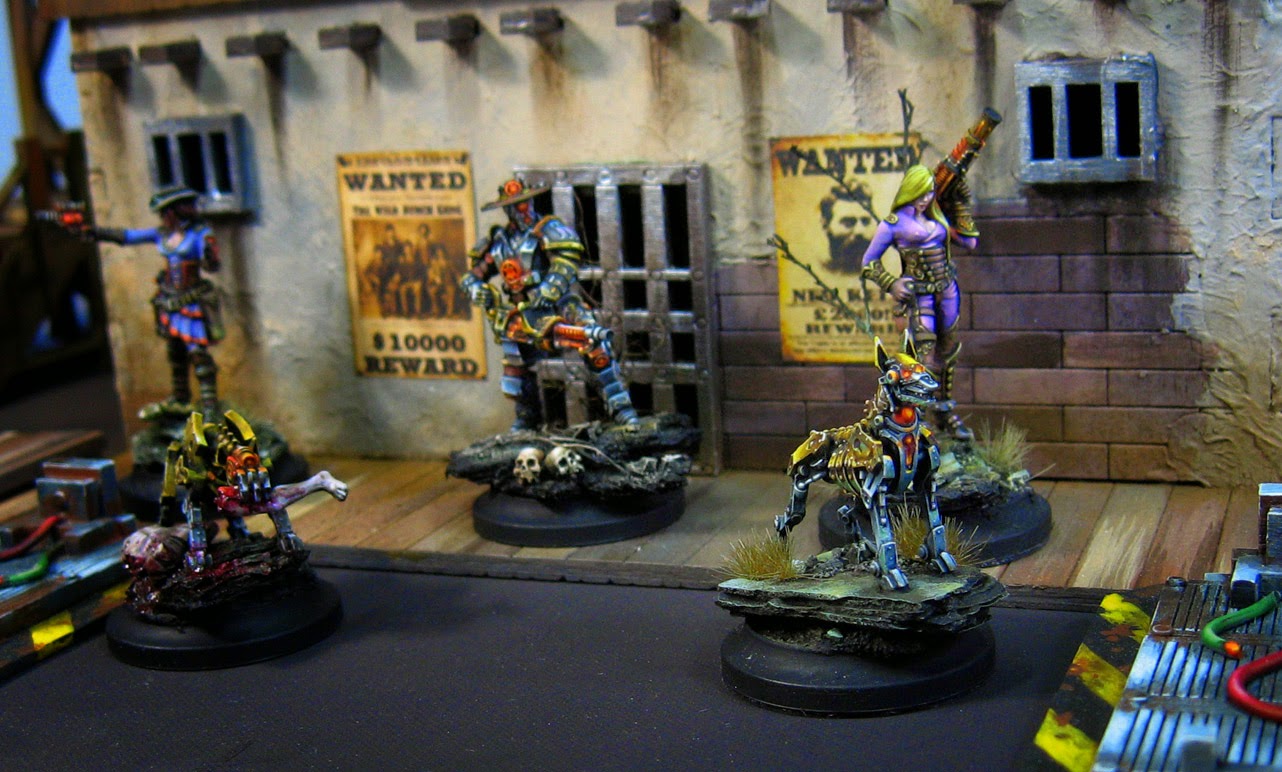 Anyway, the Jail was provided by Burn in Designs.  Check out the blog post series on how it was painted!  Three episodes of goodies! 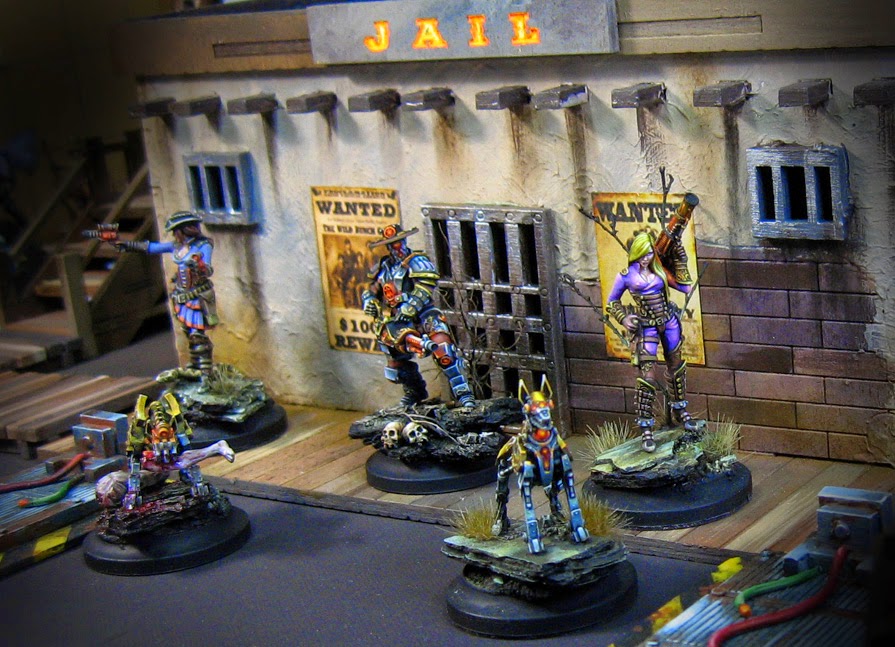 Adepticon draws ever closer.  That will be the final week of the Wild West Exodus kickstarter.  Jump on in!! 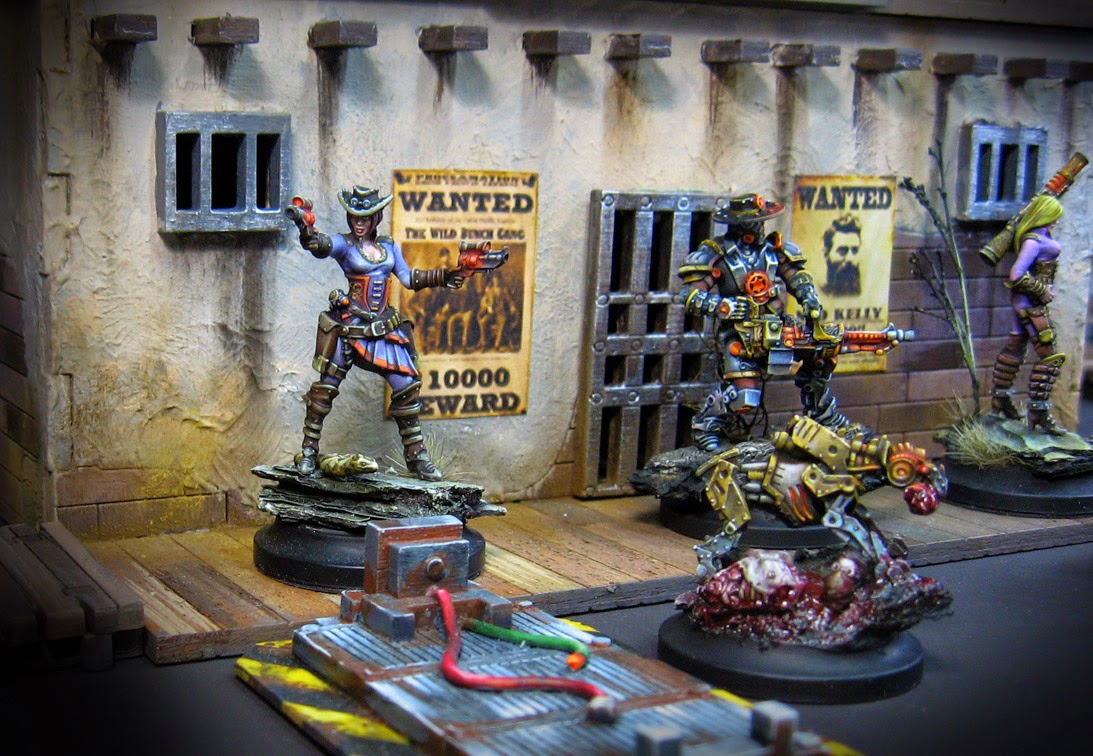 Posted by wappellious at 7:48 AM No comments: 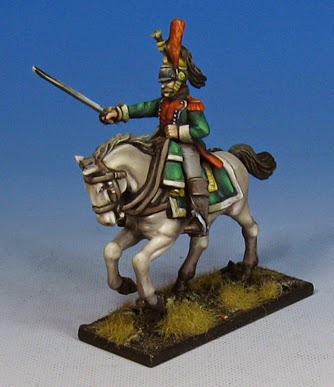 Yes folks, they come in green too!  Same guys, a little different set of colors.  Apparently this set of colors indicates Dragoons.

It's the Christmas Cavalry!