How to Take the Black 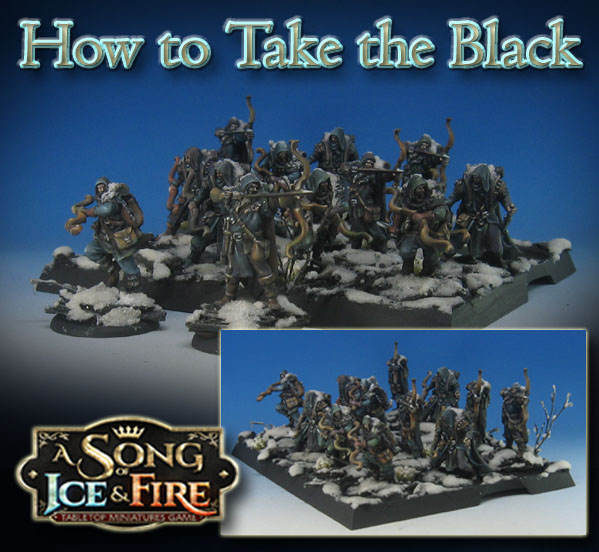 The final episode of  Army Painter Series 6 is now available to the Patrons... this was a pretty epic series on some principles that seem so simple at first.  That is, painting "black" and creating interesting snow/ice effects. 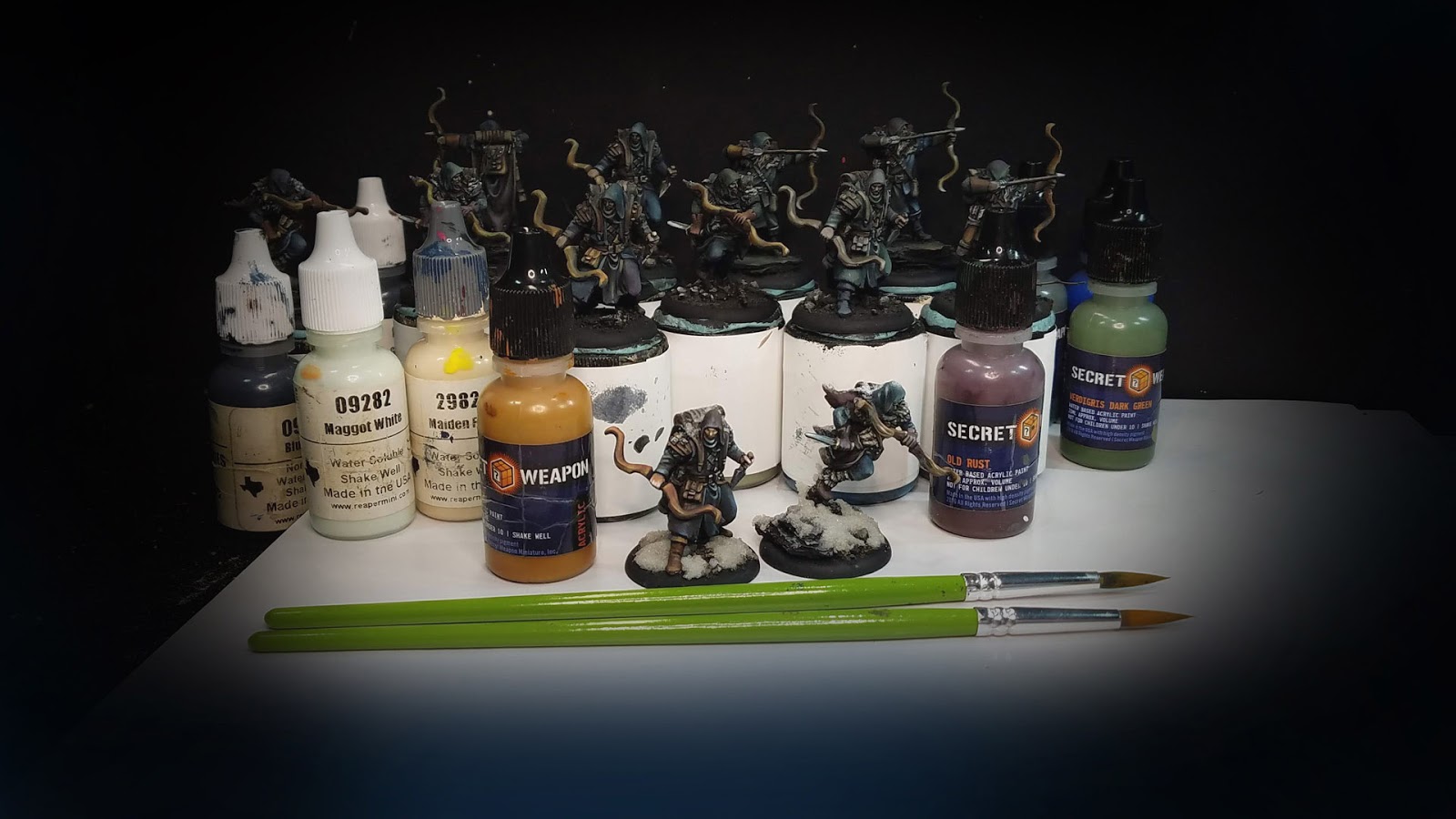 Each series is usually 5 episodes long, and it begins with basing.  In the case of the Song of Ice and Fire units, it includes the movement tray.  Here is an example of that first episode:  https://www.youtube.com/watch?v=INPfPLCTZcE 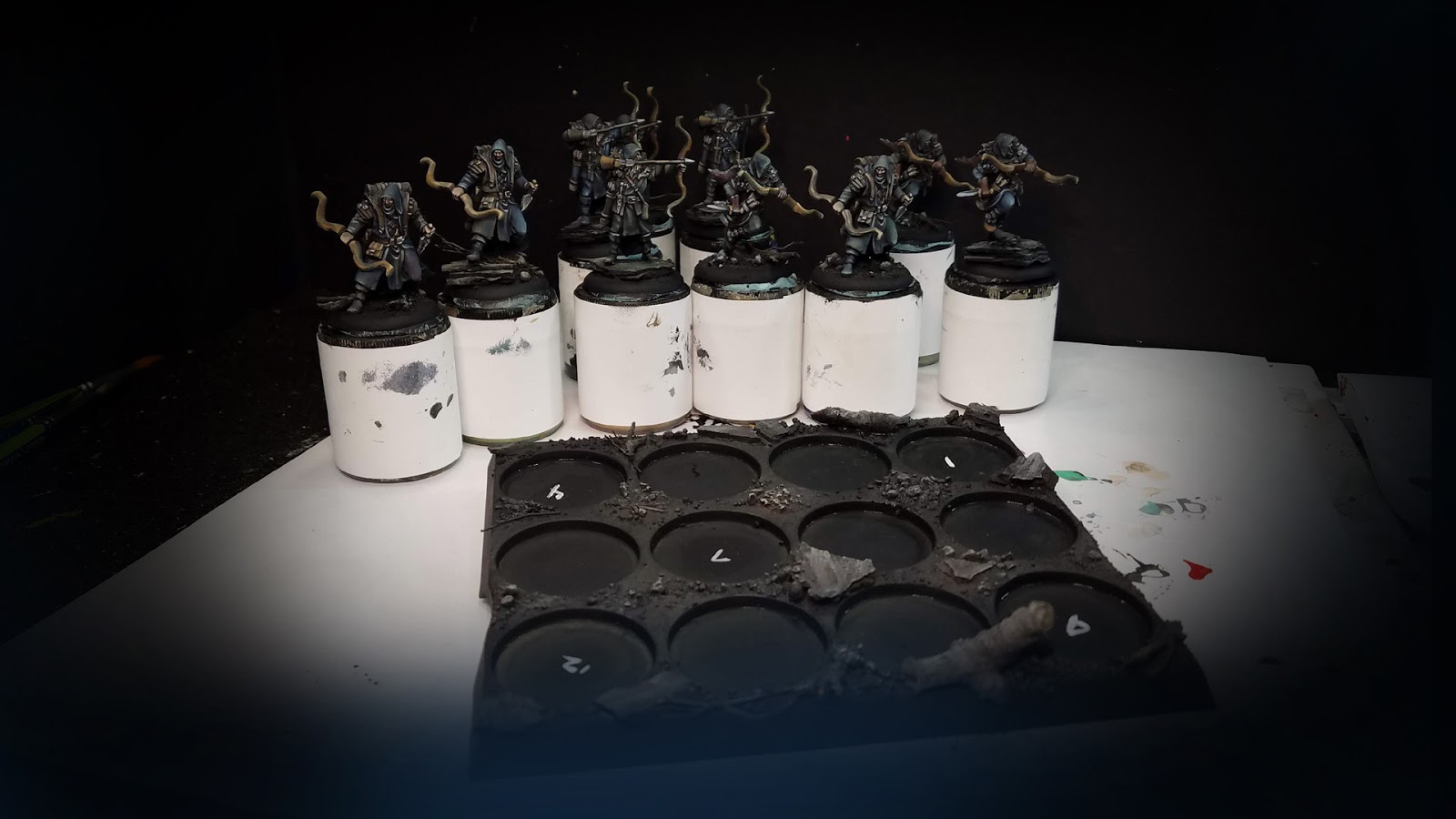 While every series begins with basing... it also concludes with basing!  Most of the Song of Ice and Fire trays require some kind of snow effects, but those around and above The Wall need even more dramatic looking snow and ice!  Check out this video of a Free Folk Savage Giant towards the end to get a peek at how that's done:
https://www.youtube.com/watch?v=1LvJv3dyjEw 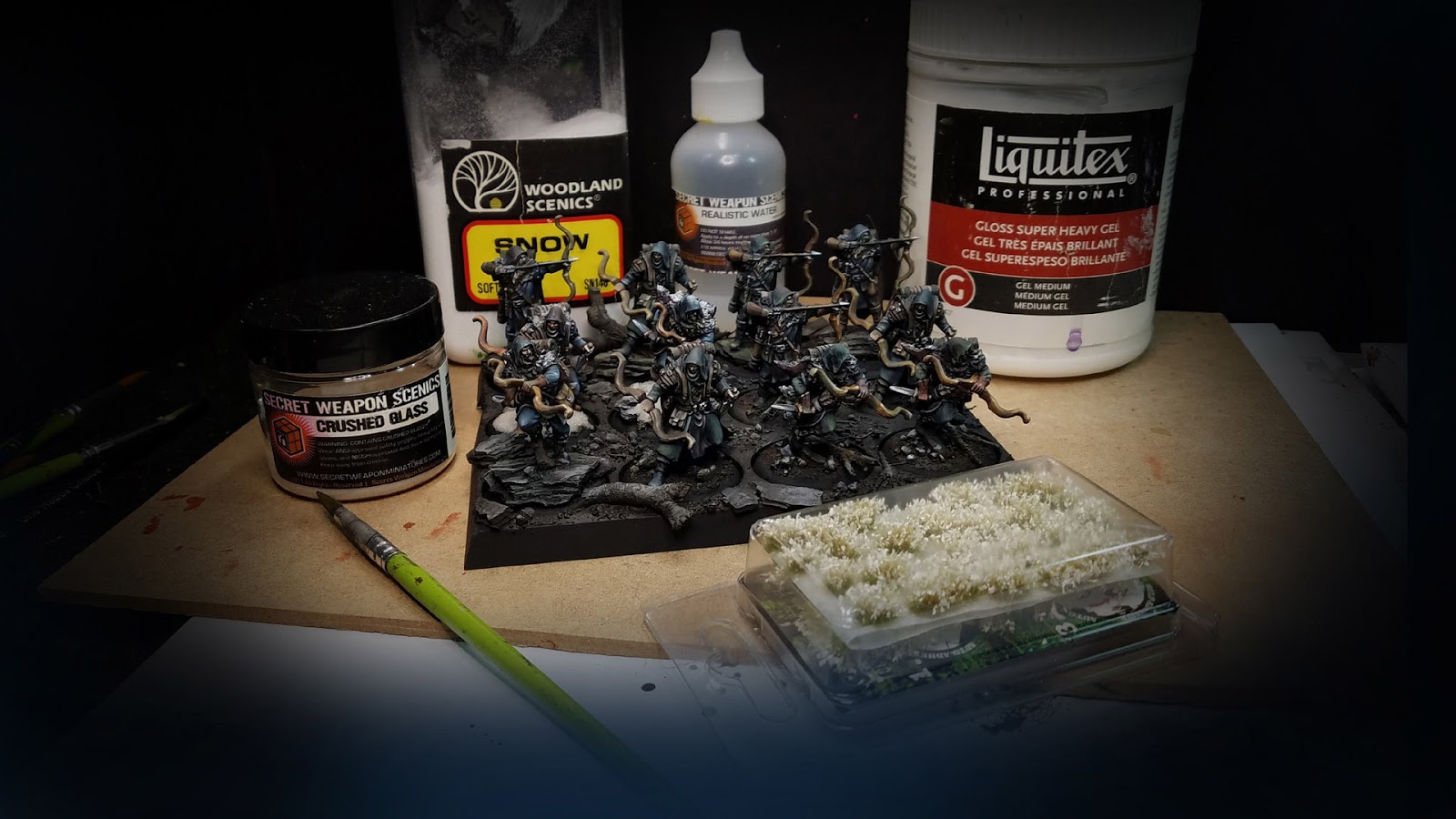 I try to show a number of different options along the way, so that you can pick and choose what kind of material that you might want to use. 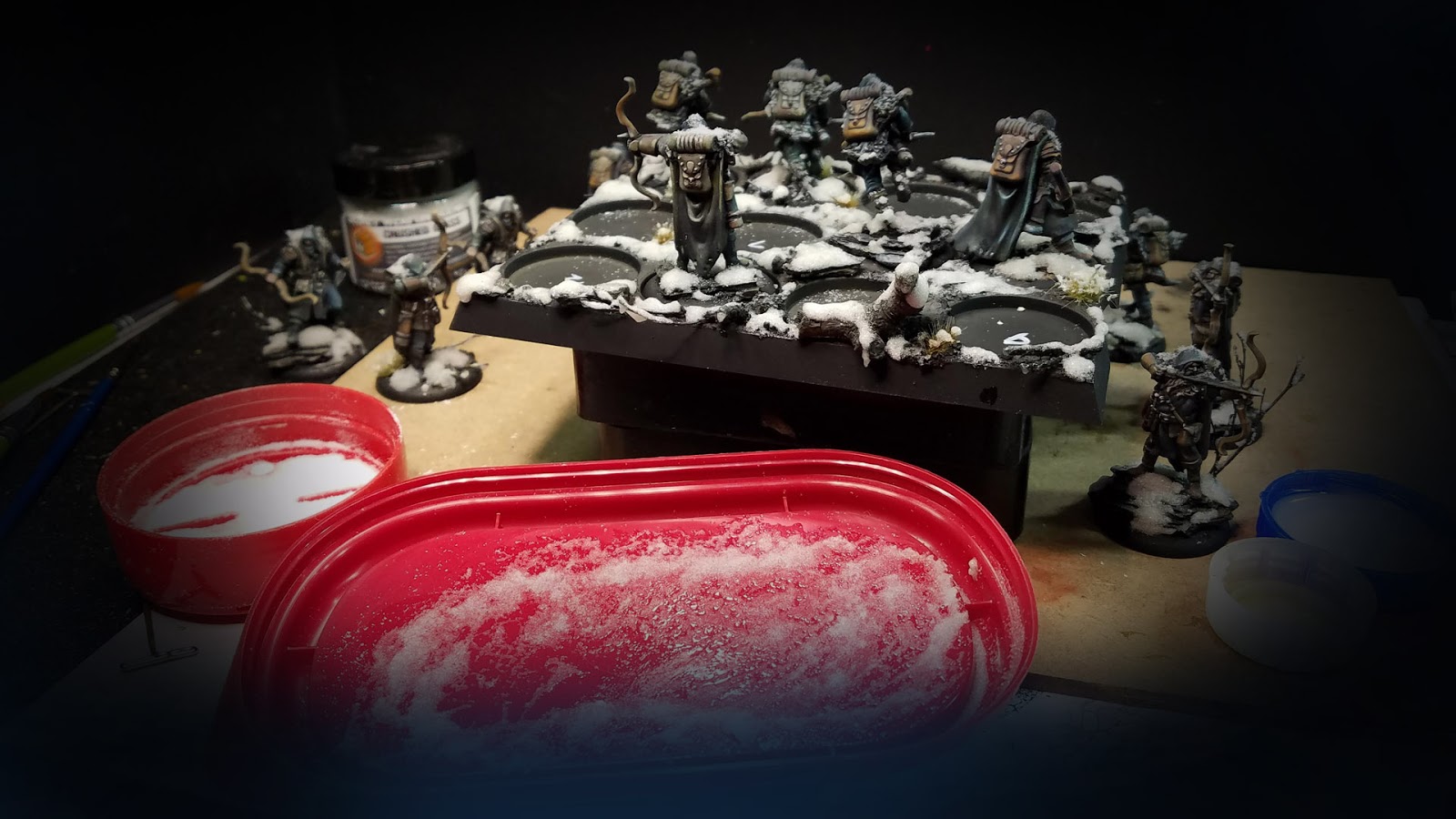 As always, the why is just as important than the how, and these long format videos really allow me to dive into why I make the choices that I do on my techniques and materials. 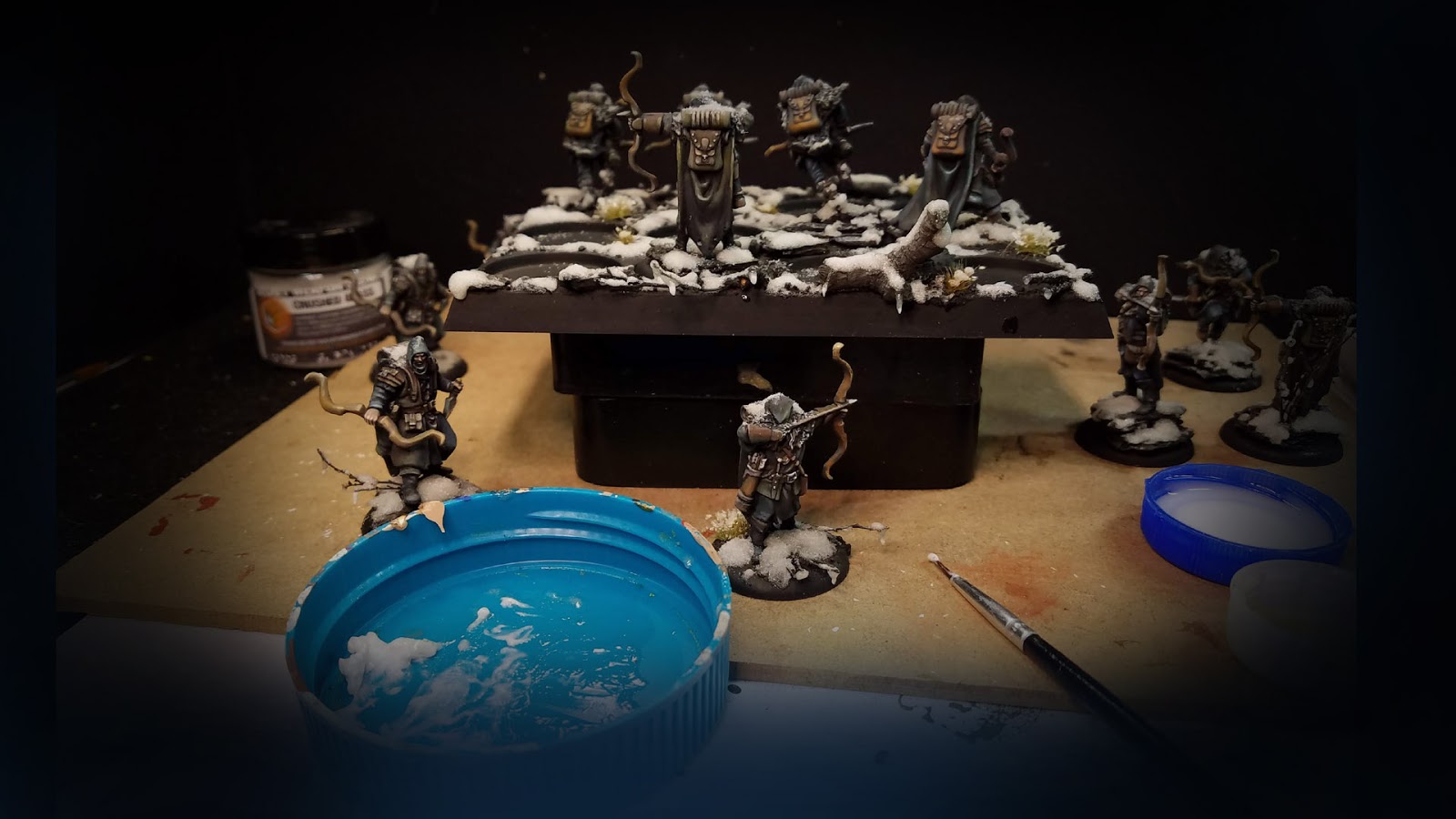 Each series is 10-13 hours in duration, and I try to involve you in the process as much as I can.  The "Currency of Time" is something we all have in short supply, and I will actually try to keep track of how much time a given effect might have taken to achieve.  Then this is multiplied by how many figures are in the unit, and then again by how many are in the army. 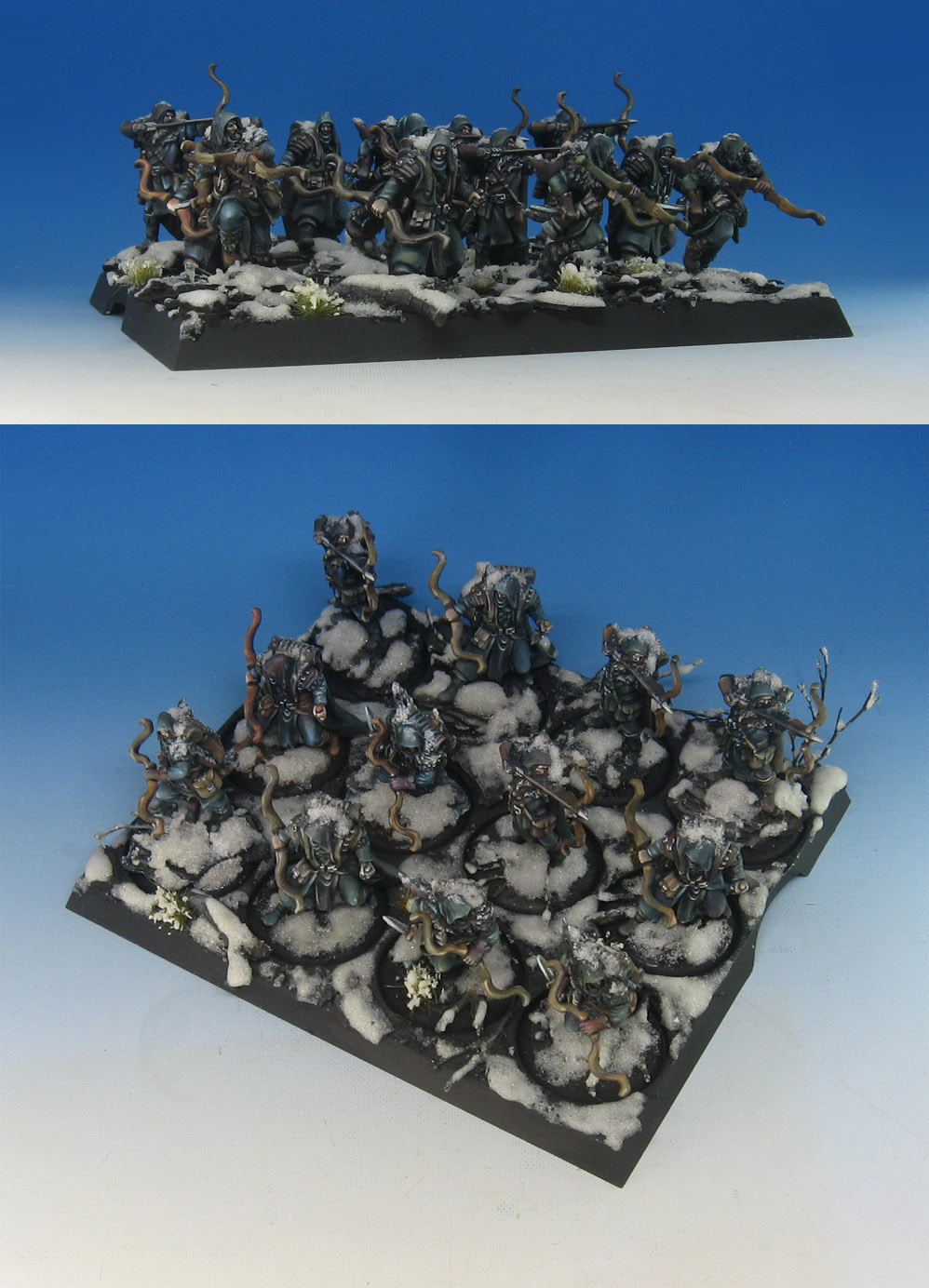 From there, I try to ascertain what is possible and what may have to be trimmed, saved for special character figures or even left out completely. 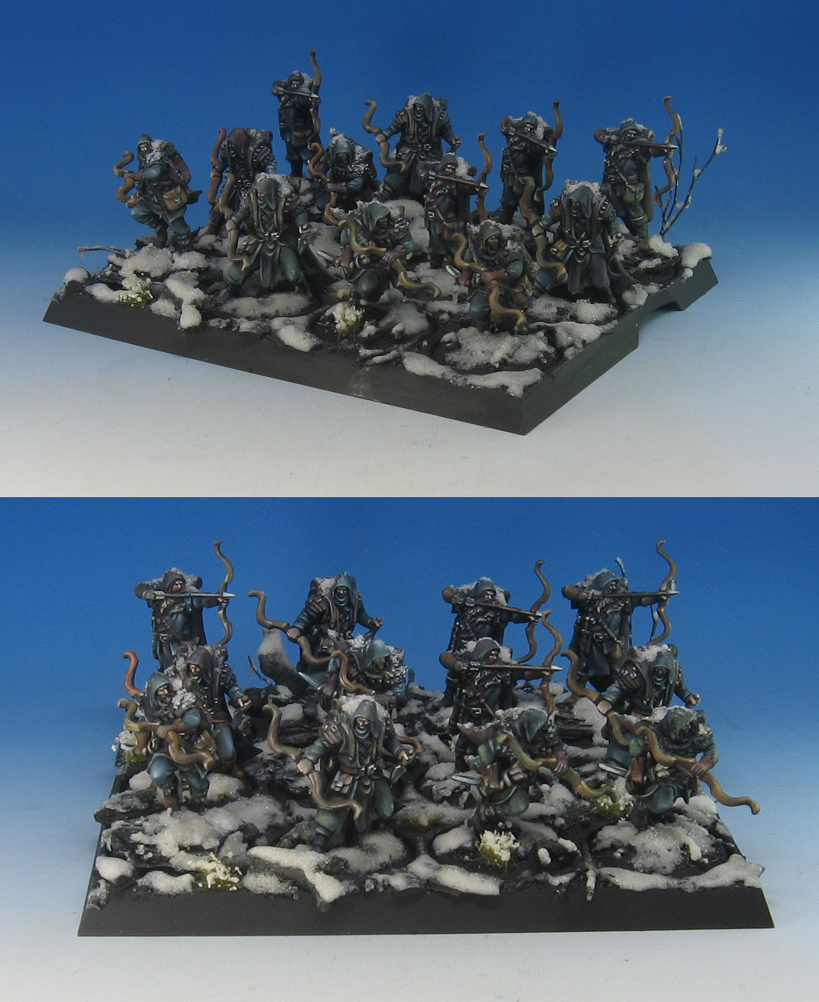 Painting the color "black" is a difficult task... especially to keep the interest of both the viewer and the painter!  I have already seen many posts on the SoIaF pages about boredom when painting an entire Night's Watch army.

It is understandable, because there are no bright distinct colors as you might have in Lannisters. 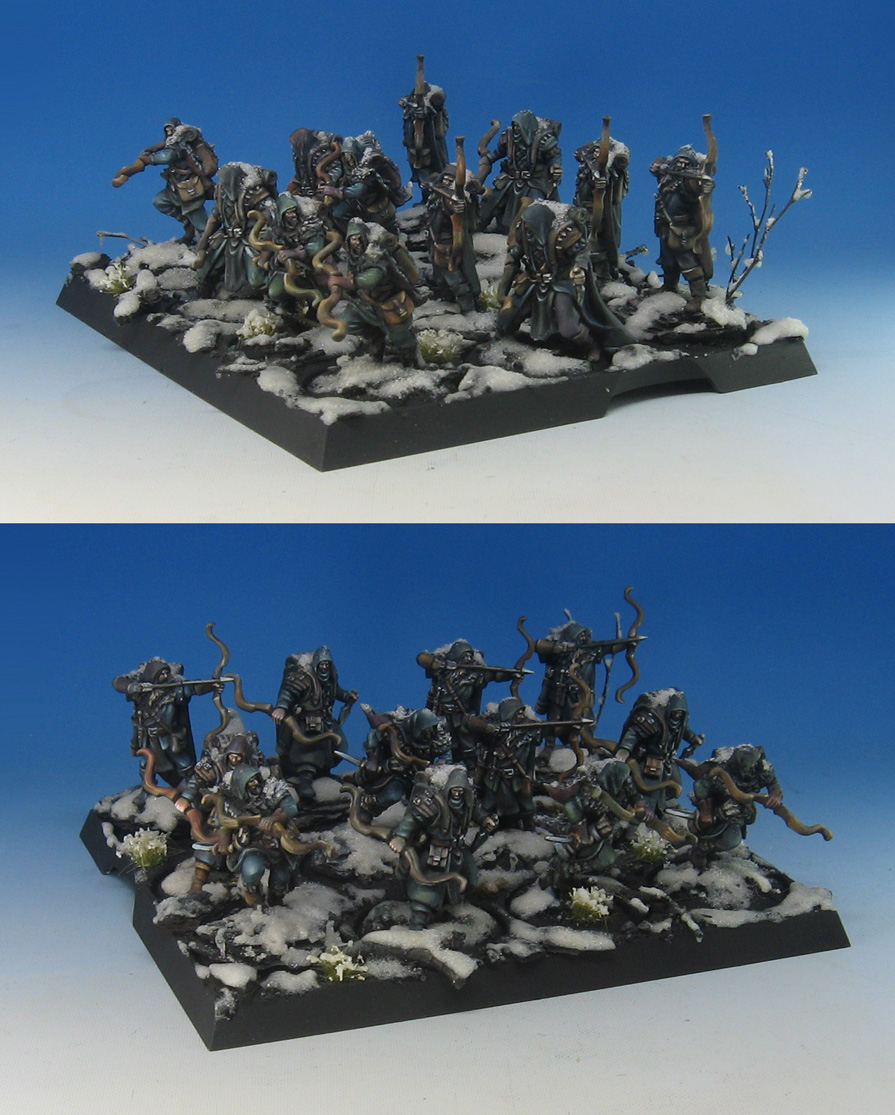 As I work through the episodes on this series, I attempt to show you ways to make the painting more interesting by creating variations in the colors... a little more greenish here, a little more blue or red there.  You can see in these back views that the leather of the packs and bedrolls are no simply 'tan', but have greens and grays in the shadows as an accent. 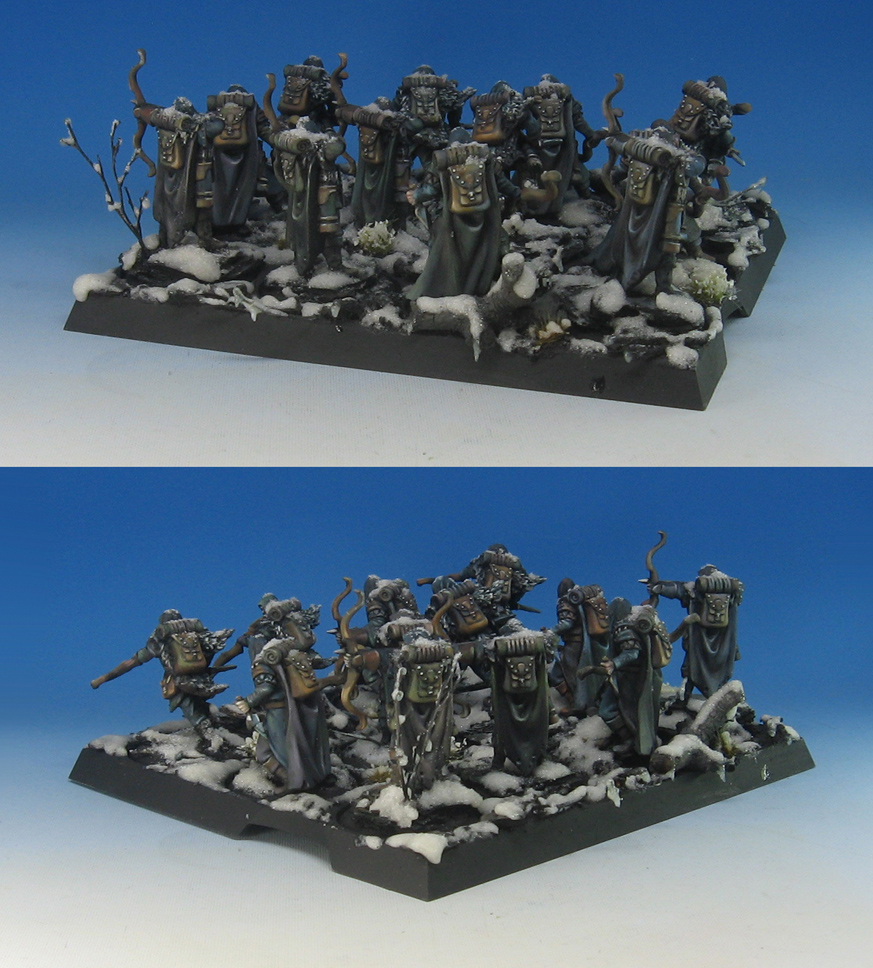 At the end of the series, I show the snow and ice process, including my favorite... icicles!  Those tiny twigs were placed in crucial areas of the bases in the very first episode, and now those branches are getting the final decorative elements. 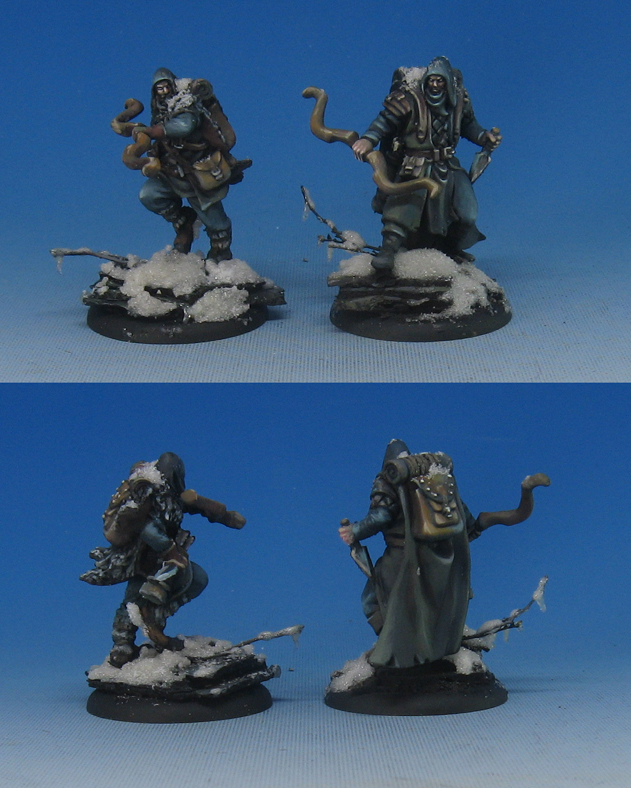 Over and over again during the series, I mention how the "context" of how you will see the colors you are painting will have a huge effect.  The simple act of adding the snow and ice effects darkens the colors you painted by several shades, so it is important to keep that in mind, and not go too crazy with extreme dark tones.

Colors that seem too light next to the dark, snow free bases transform when the snow is placed. 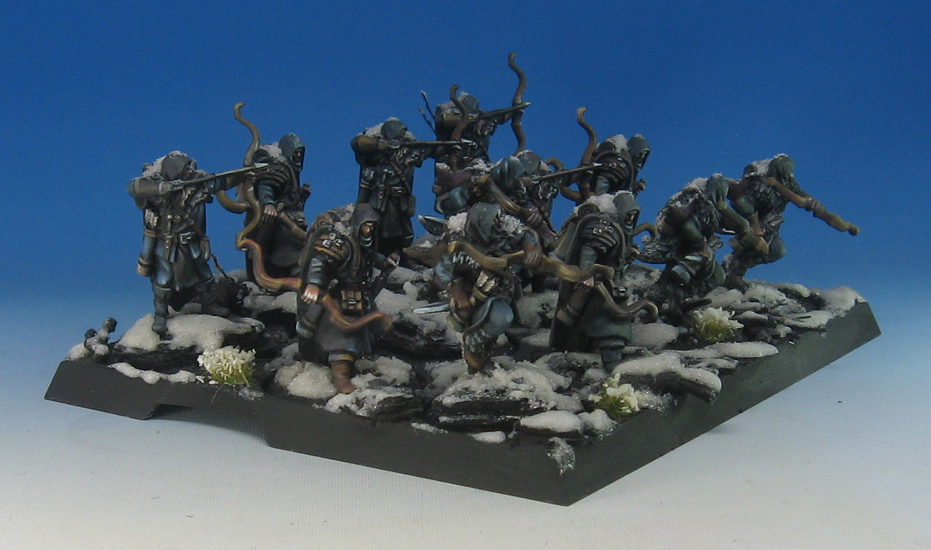 The is the second Song of Ice and Fire unit that I have done as the subject of an Army Painting series.  many more are on the way, leading up to Adepticon.  My next Song of Ice and Fire unit is a set of Free Folk Spearwives.  This is not limited to that genre, however.  I already have 2 Lord of the Rings series, an Age of Sigmar and even a Bolt Action tutorial series on the Patreon Page. 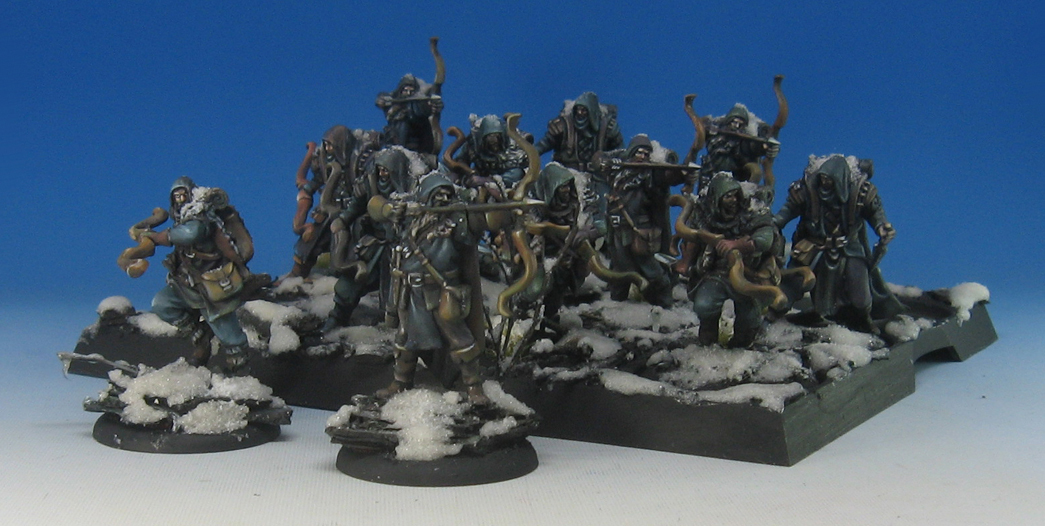 The Army Painter pledge level is $15, and as I mentioned, it will provide access to all the various tutorials that I do that month, which is at least 16-22 hours of brand new video tutorials! 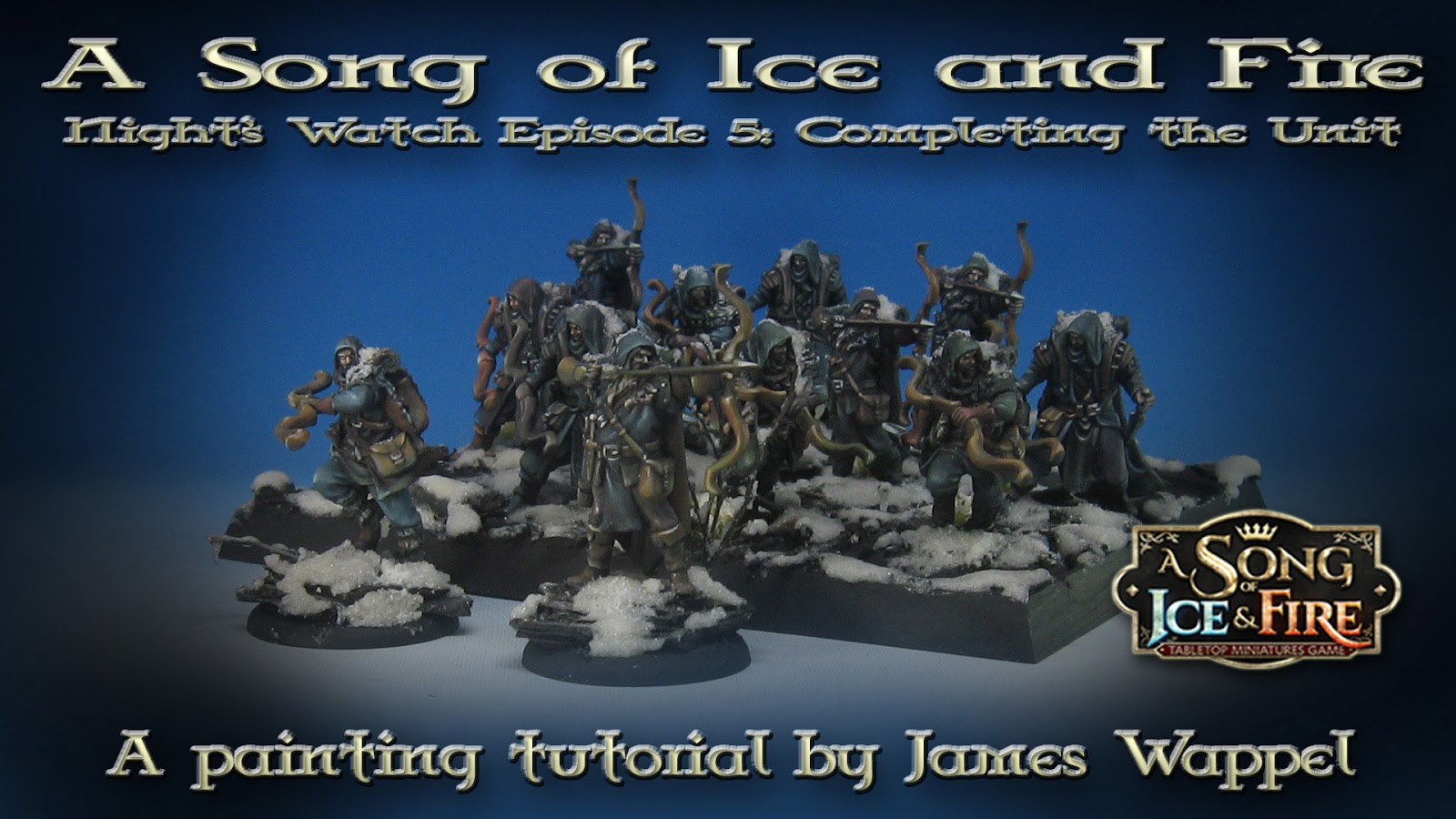 Posted by wappellious at 1:41 PM No comments: