All the King's Horses 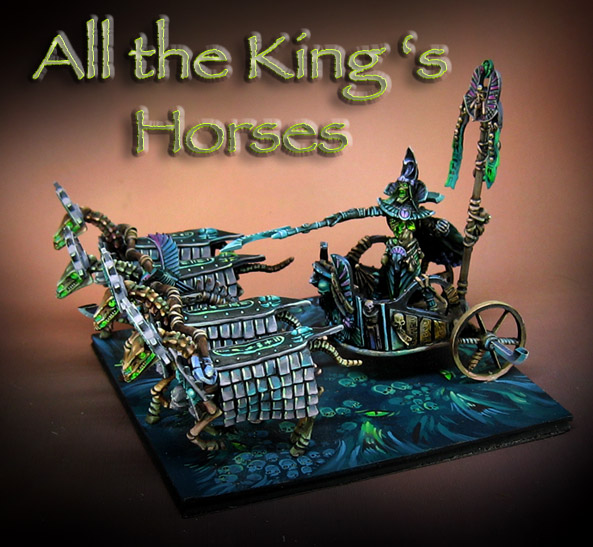 One of my favorite aspects of the Tomb Kings was converting all the skeletal horses, including those pulling the chariots.  I believe it was either the cover of the new army book or one of the interior illustrations that showed the horses with these scale mail 'blankets'.

I could not resist trying to make those myself!  I even had to create an entire theme/story to go with them :-)

I used tin foil as a base for the green stuff, which could be pressed into a mould (made from the original piece that I sculpted) and then wrapped over the miniature.  This tin foil gave the green stuff critical support as it cured, so I could put the blankets into any position that I wanted, and it would not sag!

I also had a lot of fun with the "demon marble"... so much fun that I even made one of my kickstarter painting videos featuring this technique.  The entire army was painted with this marble effect.

You can get a better view of that here:

Here's an example of converting the Hierophant on skeletal horse:

One last view of an old favorite!

Posted by wappellious at 11:01 AM No comments: