The business end of the Judgement 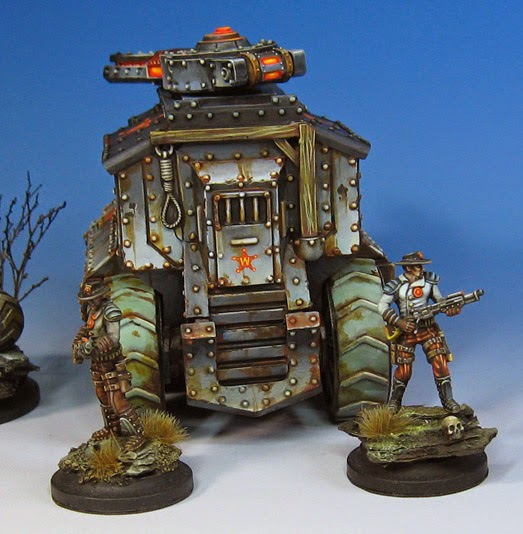 Time for some more views of the Death Wagon... the Lawmen Judgment Heavy Support.

I have a few views from above in this post... 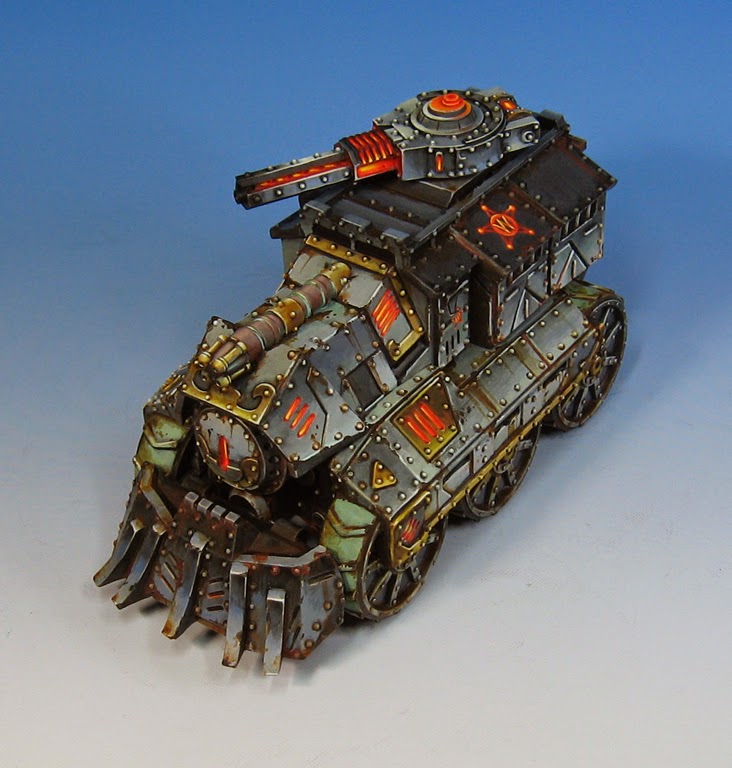 This perspective shows the stuff going on with the rail gun and the freehand. 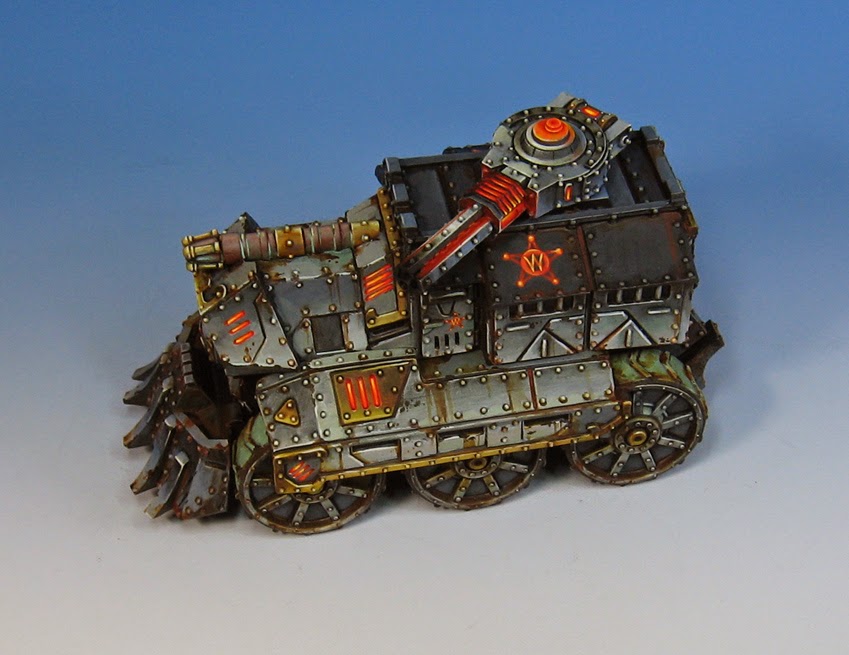 I am very glad I went with the darker color roof.  I knew that it would be a nice contrast to the orange glows, but it helped to make the metals of the sides appear a little lighter. 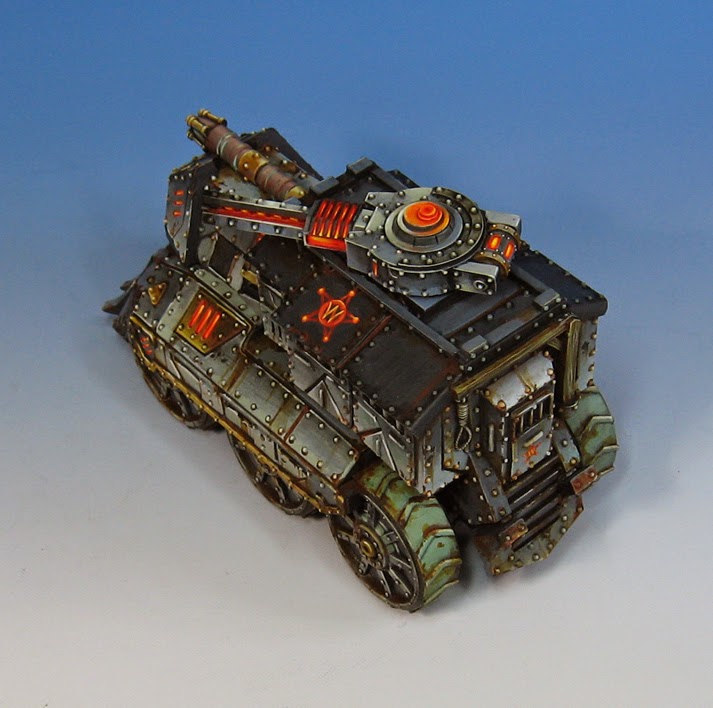 It's also fun to see the turret turning in these views! 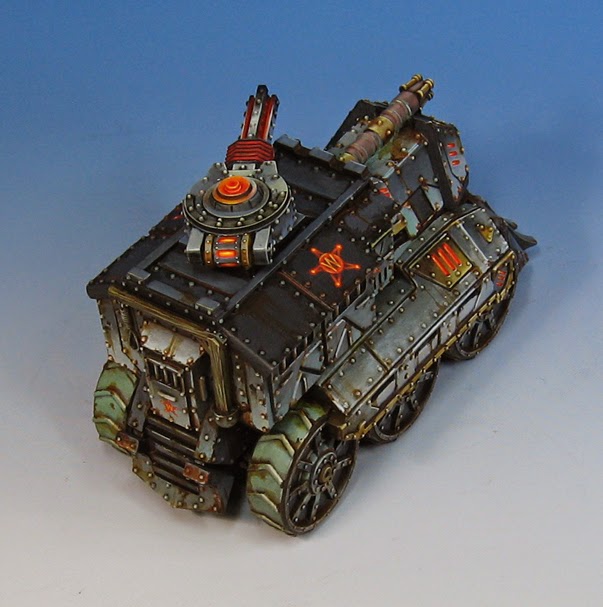 As I have mentioned before, there's more freehand going on the sides of the vehicle, right above the wheels. 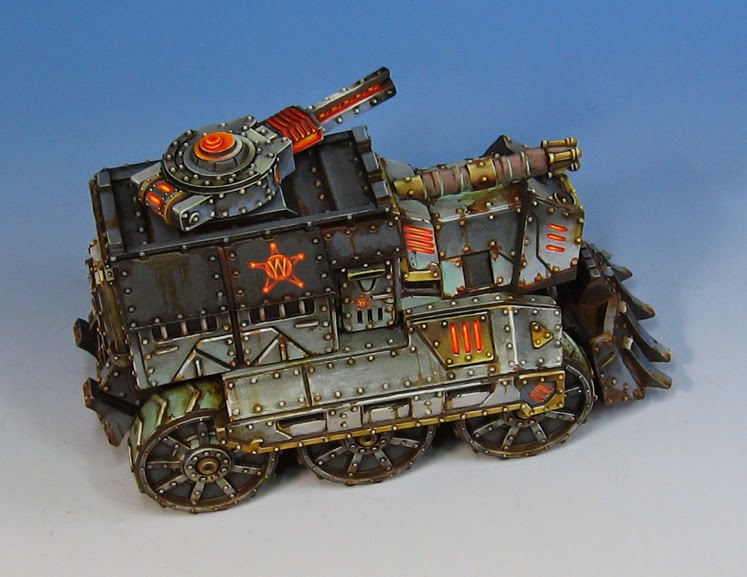 I look forward to seeing this vehicle in huge group shots with the rest of the posse. 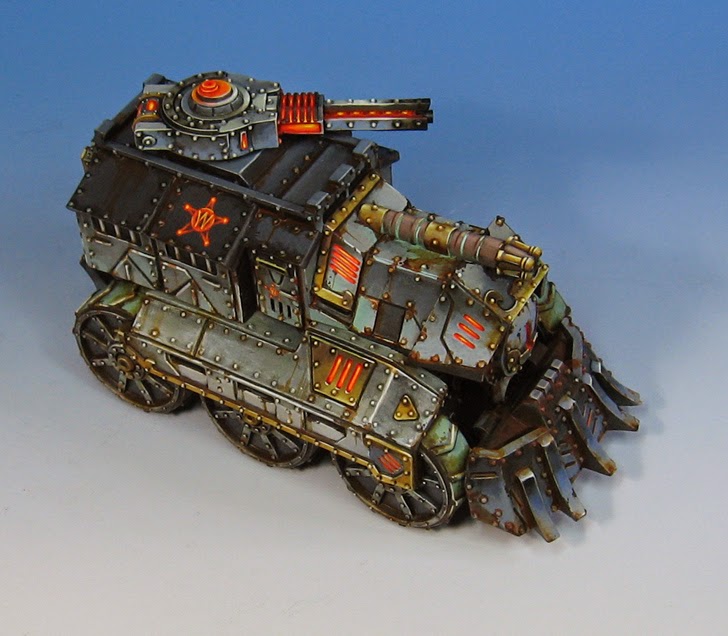 Of course, we have the part about the Judgement that I love the most!!!  Get the hangin' crew ready! 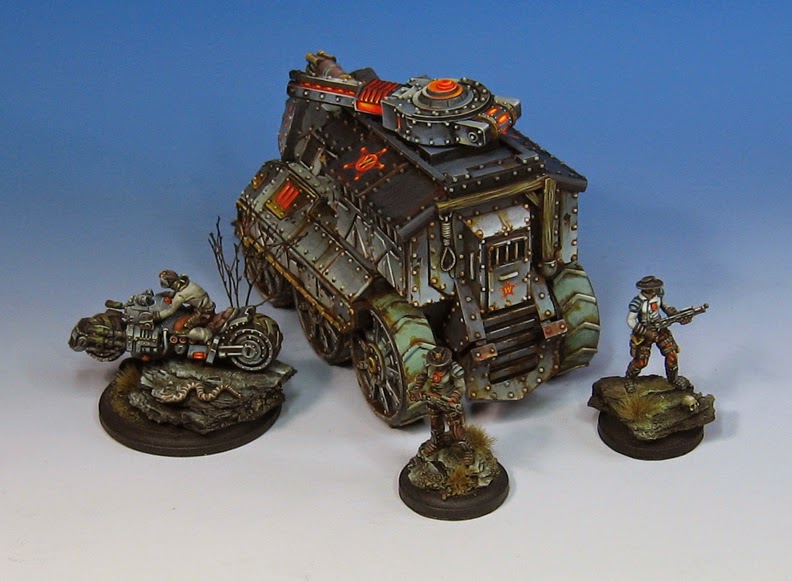 All right Jesse... we have a spot reserved for you!! 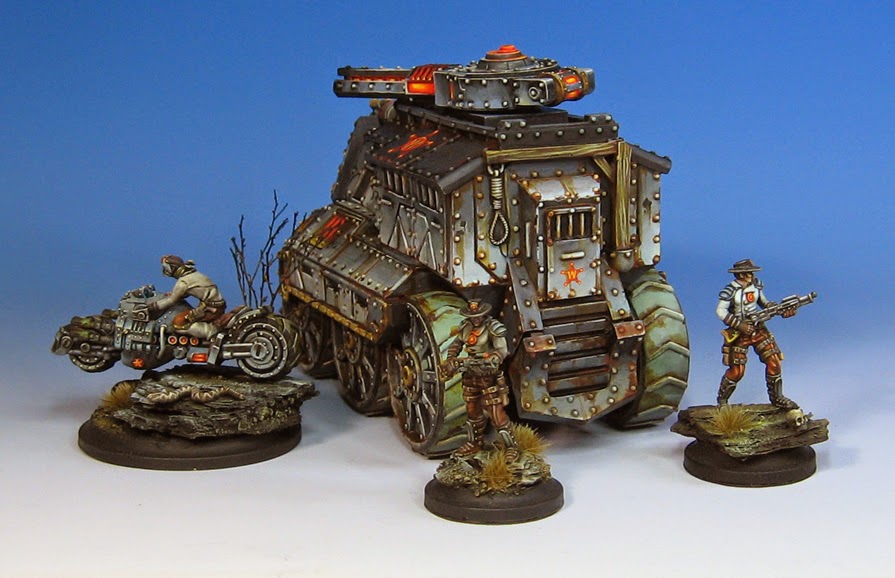 Posted by wappellious at 2:37 PM 8 comments:

Get a grip... tentacle time. 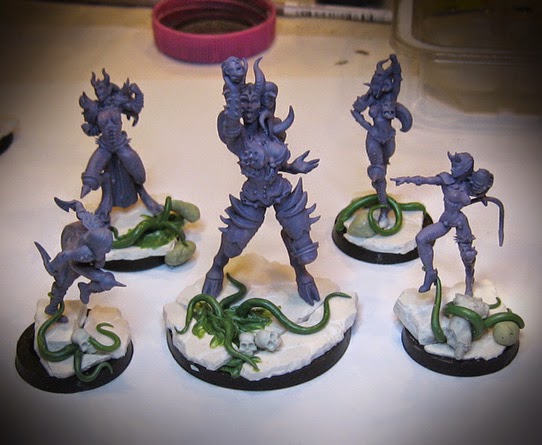 With the Sukubus Studios fabulous Blood Bowl team prepped and primed, I wanted to do something fun with the bases.  Yeah, you know me and bases. An addiction to the extreme.

I decided to make some broken marble bases, so that I could either paint demon faces into it, or glowing runes... or both!

I thought I would put a few Secret Weapon Miniatures skulls and torsos on a few of the bases to create even more variety between each one.

It's VERY important in Blood Bowl for each figure to be easily distinguished from each other.  Otherwise, it gets very confusing, and you start forgetting skills, etc. 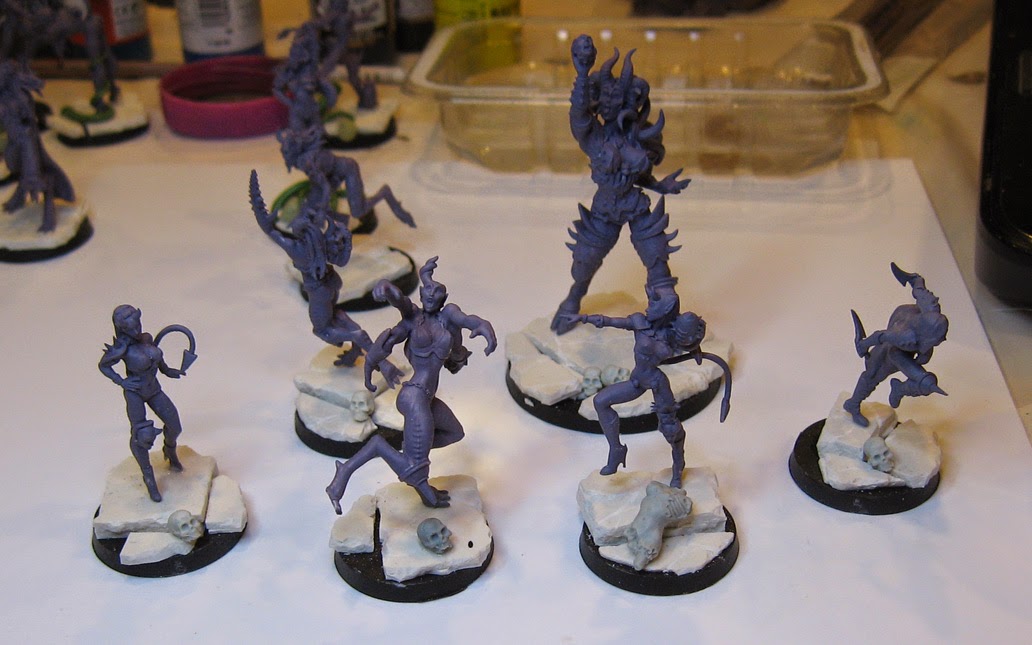 The tentacles are going to be a bit more simple here, as I wanted them to fit in with what some of the miniatures have as hair, and so on. 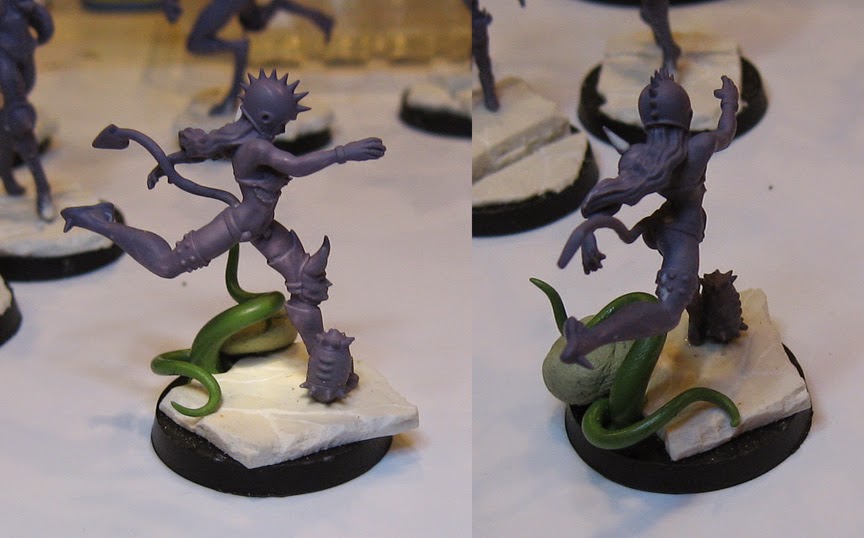 The Secret Weapon parts made a nice base for extra tentacle arms!

What would Chaos bases be without a few random orifices. I will be adding more of these once the tentacles have set up.  That's a hard lesson we learned years ago with green stuff.  Do a little section at a time on a lot of figures, so that you avoid the temptation of messing around with the next step.

This usually leads to you destroying whatever fantastic thing you just sculpted. 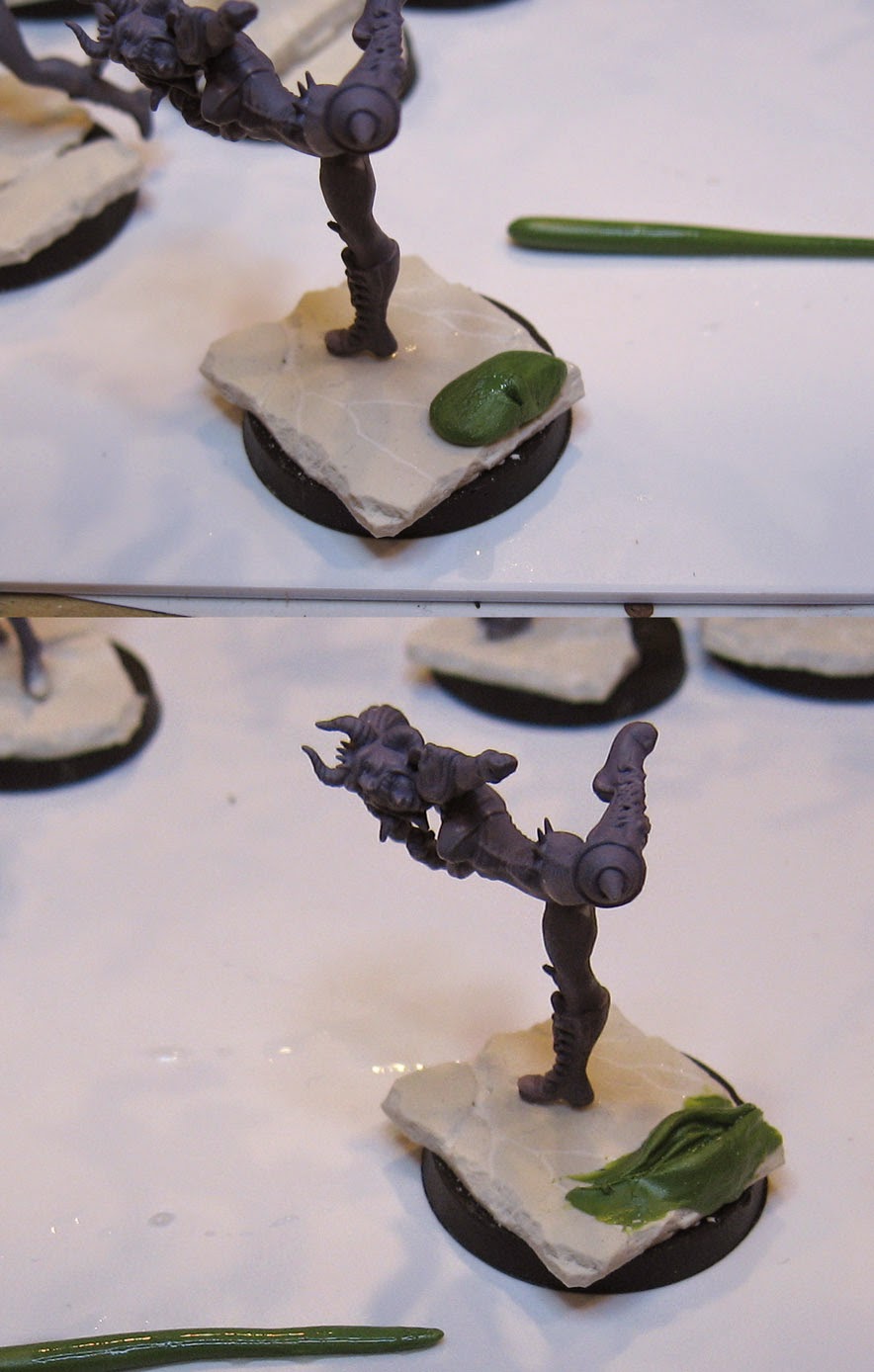 Cathy found out years ago that if you manipulate the mixture of the green stuff, you can make it more sturdy, such as having a higher percentage of blue in the mix.  While you can't sculpt as many details into this, the very thin tentacles will be more likely to hold their shape as it cures! 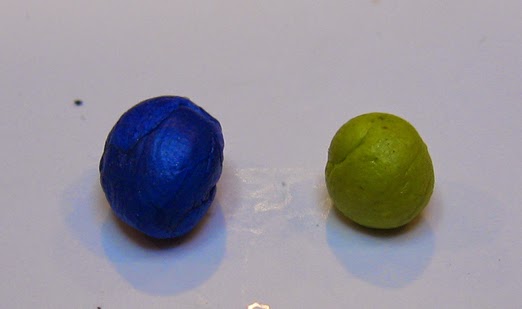 I did this on the more "free standing" tentacles, such as this one. 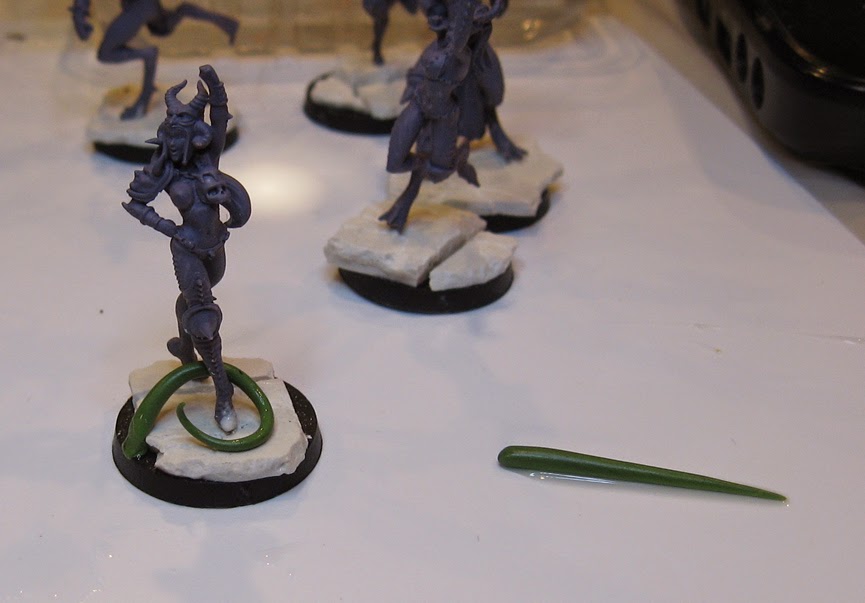 In contrast, having more yellow in the mix makes it softer, and far easier to get nice details.

It's also a lot stickier than the predominantly blue mix, and that can serve as a 'glue' to anchor a tentacle or two!

I did that here, as I wanted to sculpt a few fine shapes on the marble, which would be a nice anchor for larger, free standing tentacles.

While wrapping the tentacle around a leg works very nicely for the theme of the basing, there is a practical side to this method.  There were a few miniatures that I could not pin to the bases, like this one.

So, the tentacle is providing a lot of extra stability for a miniature that will be knocked over many times... making it less likely to snap off the base. 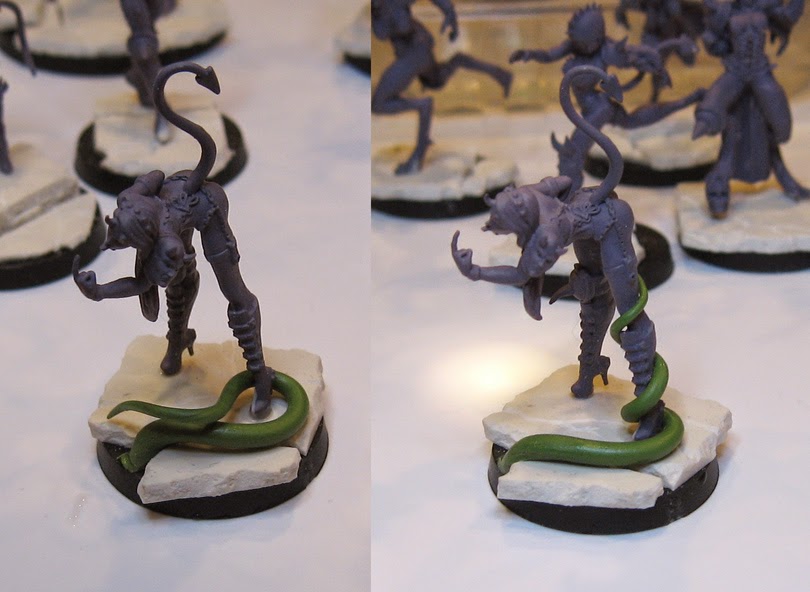 I will be doing some eyeballs as well on the other bases when they cure! 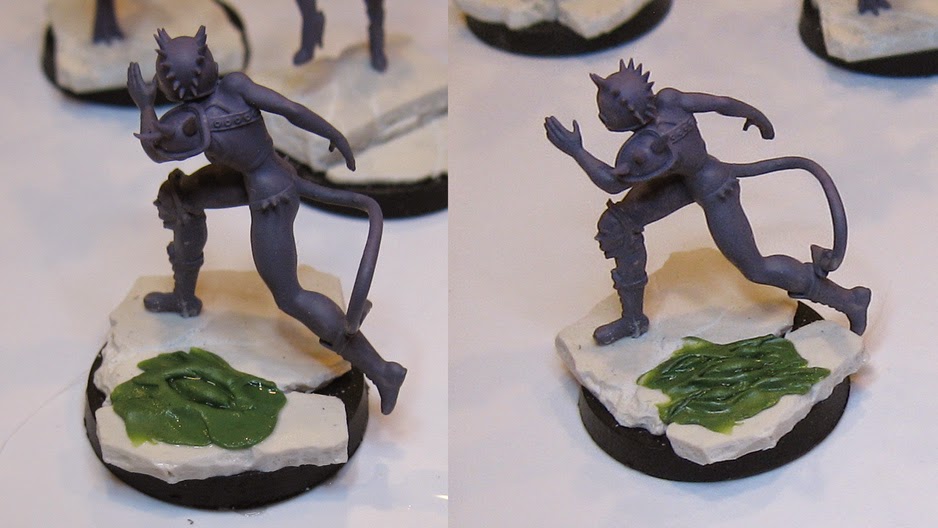 What we have so far... tentacles curing, waiting for the next layers!

Posted by wappellious at 2:25 AM 4 comments: