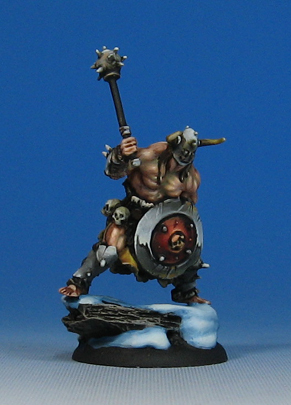 With GenCon entering its final day, we have one more Red Box Games for you!

Yet another in the string of barbarians!  I have run into many of this sort roaming the halls of the convention center, and the streets of downtown Indy. :-)
In the two years I have done the show, I have seen barely the tiniest of fractions of what is all going on.  More is revealed by the minute.  I am hoping that next year might allow for some sort of additional branching out or exploration.  At least beyond a 10 x 10 booth.
The dealers room is quite the meeting place, though.  It is the one way to give yourself an "address", in every sense of the word.
Again, much appreciation to everyone who took the time to come by and hang out.  That room is huge, and I know you all had things that you wanted to see.  Simply getting there would take a while, so I know that some sacrifices were made to do such visits!
You are all magnifico!!!!