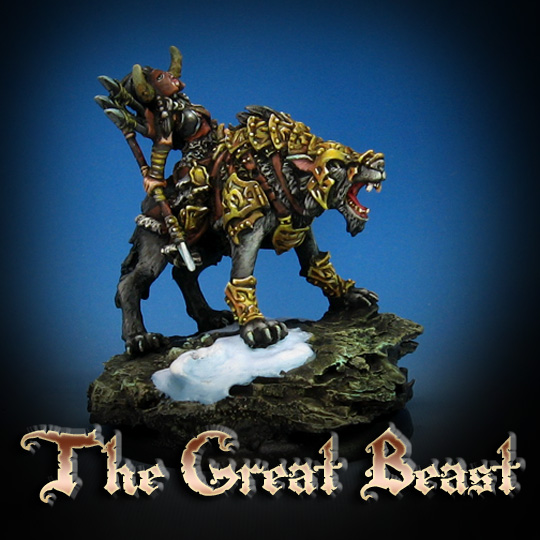 This Oboros champion figure was a bit tricky to paint.  Aside from all the different pieces protruding in the way of potential brush strokes, I had to do some major shifting of the colors on the fly.

As I have mentioned many times about the Shaded Basecoat technique, one of it's many advantages is that changing the entire color scheme in "mid flight" is no trouble at all.  To keep in harmony with the other figures in the project, the armor really needed to be more of a grey.  However, the wolf also had to be black/grey, which resulted in way to many things being the same color!

Right off the bat, I knew this wasn't going to work, so I tried a bit of gold for the armor, which made an instant difference.  By using some grey mixed with the golds, I was able to shift that more towards green, and that meant it would not be too jarring.  Also, there were a few other instances on other figures where a gold had been used as an accent on certain champion figures.

I have demonstrated many times in front of a live audience how completely changing around a color scheme as you are painting it can be a lot of fun, and very liberating!  You know that you are never "locked in" or trapped by what you have already done, as you are not investing vast amounts of time on any one area.

Working "globally" as you do with the Shaded Basecoat also reveals these color theme issues right away, instead of remaining hidden because you are only working on small portions of the figure at a time!  As you alter your color scheme, you can even use what's already been painted as an underpainting, as was done here.