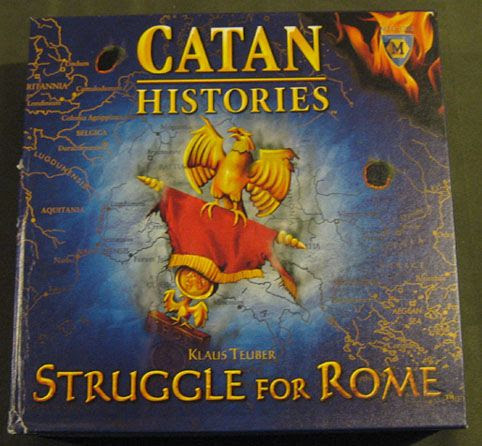 When we last saw our intrepid Elven heroes, they were on the cusp of collapsing the entire left side of the orc line.  Gwaihir had silenced the Mouth of Sauron (he is now one of those singing bass things you hang on the wall), and Seregond had done lots of mayhem to the remaining orcs.

At this stage in the battle, the eagle managed to free himself from a pesky orc and land by the shaman to say "Hi".  The fury cast by the shaman would be far more troublesome than a whole unit of orcs, since we were about to break the orcs.  The last thing I wanted to happen was orc doing a daisy chain of auto passing courage tests around that hill!

I also had to kill off that banner bearer, who was at least the 3rd orc to pick that darn thing up! 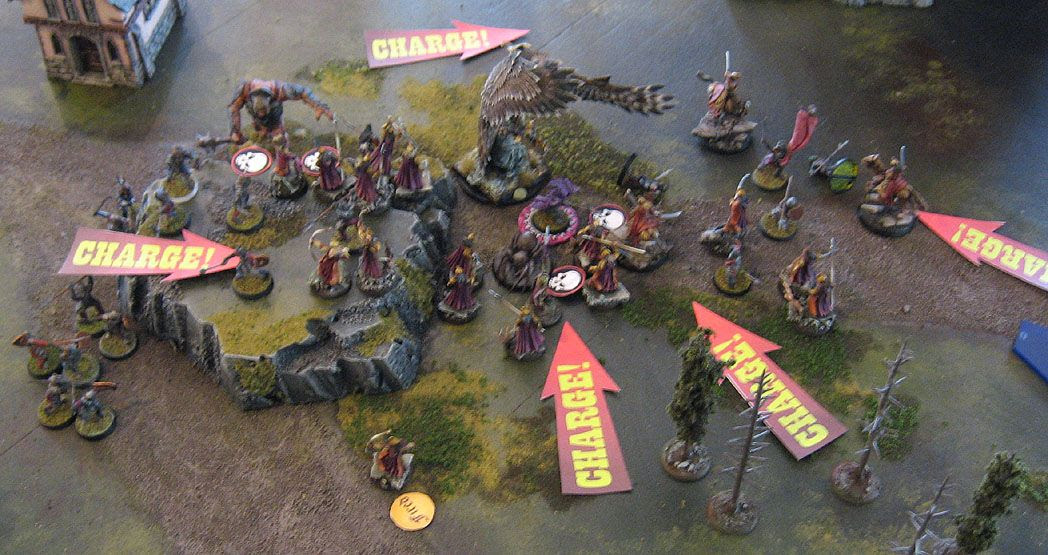 The eagle failed to kill off the shaman, but he lost the combat, taking away the fury, which is what I needed.

However, the mostly intact orc unit had made it to the central hill, as did the troll.  My lady stormcaller managed to beat the 'mighty' troll in combat, so she continued the fight with her cricket bat.  However, if the orcs broke and rolled under a '2' on the next turn, the game would immediately end.  This is what I had hoped for myself in the last game, but the killing continued :-) 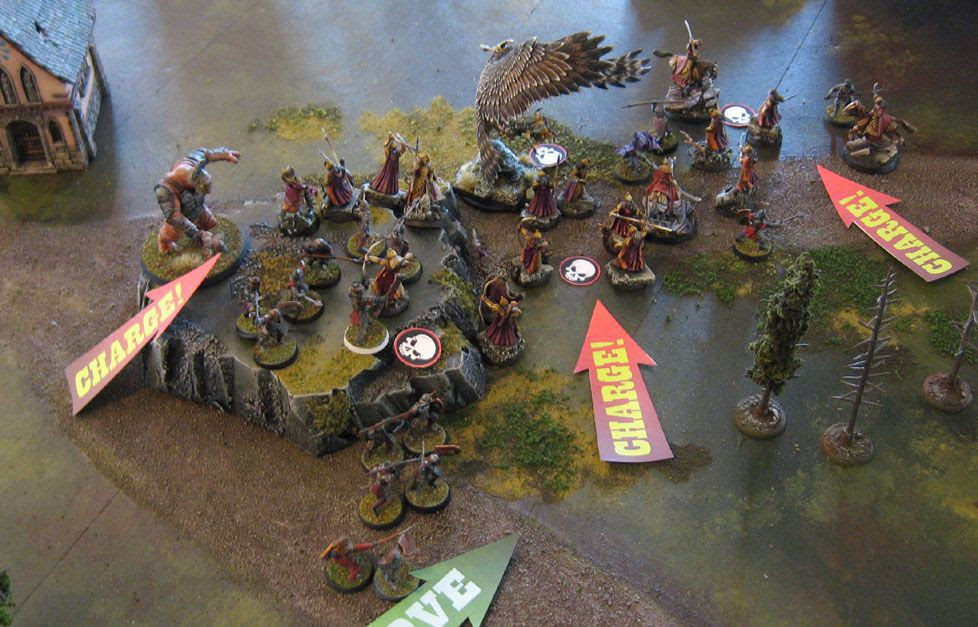 OK, the shaman and the rest of the troublesome orcs have essentially been wiped out.  The troll did kill the lady stormcaller (having to pick on a girl, of course!), and a few other Elves died to the orc captain.  The orcs were well into the break point, so we rolled a dice... 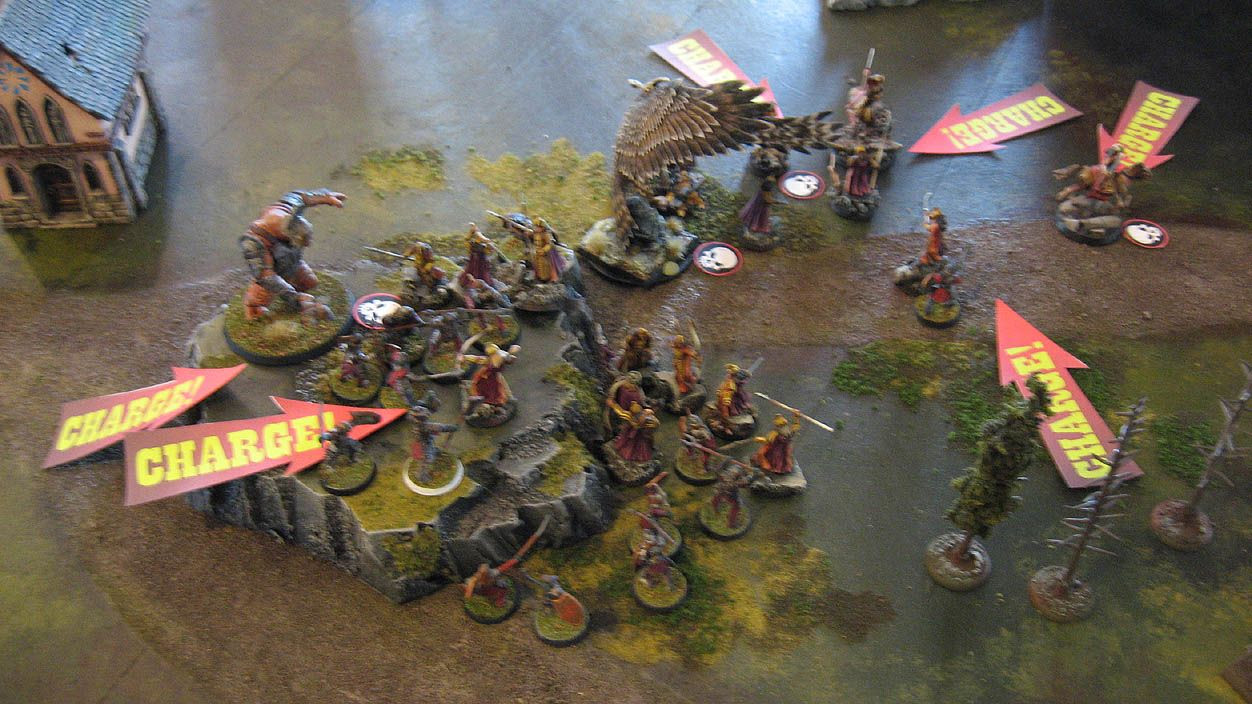 It came up as a '2', so the game came to an end.  I had tried to get as many elves over to the hill as I could, even passing up easy kills away from the hill.  I was already up 6 victory points (3 for breaking the orcs, and 3 for killing the Big Mouth).  Would that be enough? 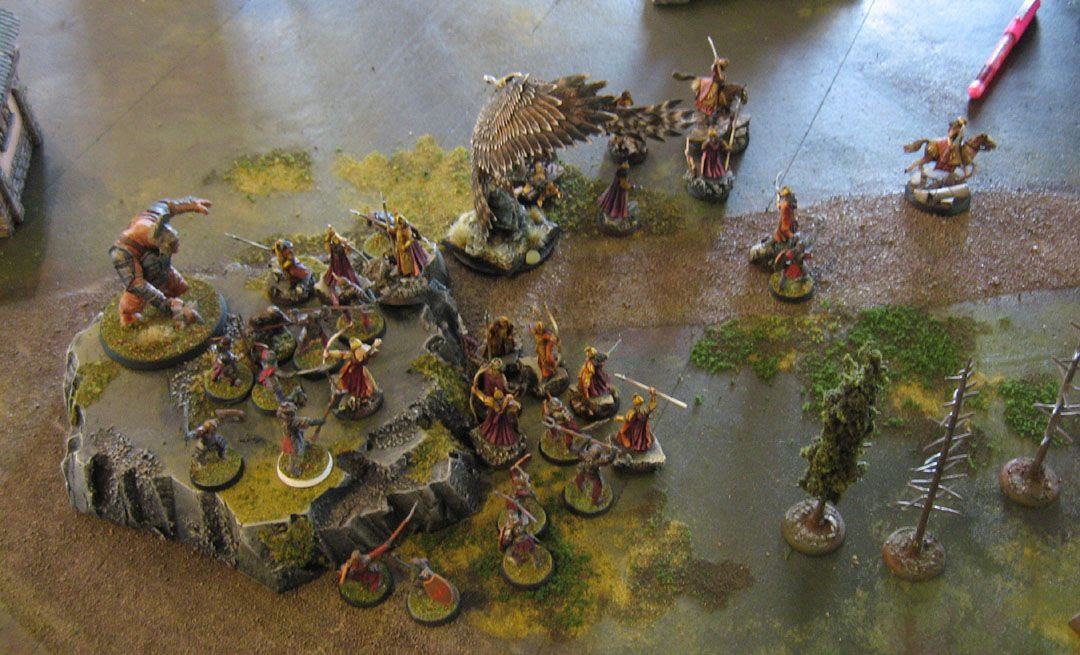 In the end, Rich outnumbered me 10-7 on the hill, which meant that I had a 3 point victory!  Without a doubt, the eagle was a huge addition.  The King could not have reached, much less hurt, the Mouth of Sauron.  Gwaihir flew over a batch of trees and nabbed him.  The banner on the horse was not as useful as I thought, but there was one crucial re-roll that came up a 6 to win me a fight.  I will need to take better care of him.  We both realized that we had finally come up with something that worked.

Don't feel too bad for Rich, though, because he was still able to get revenge later on, as we tried out a new Settlers game: 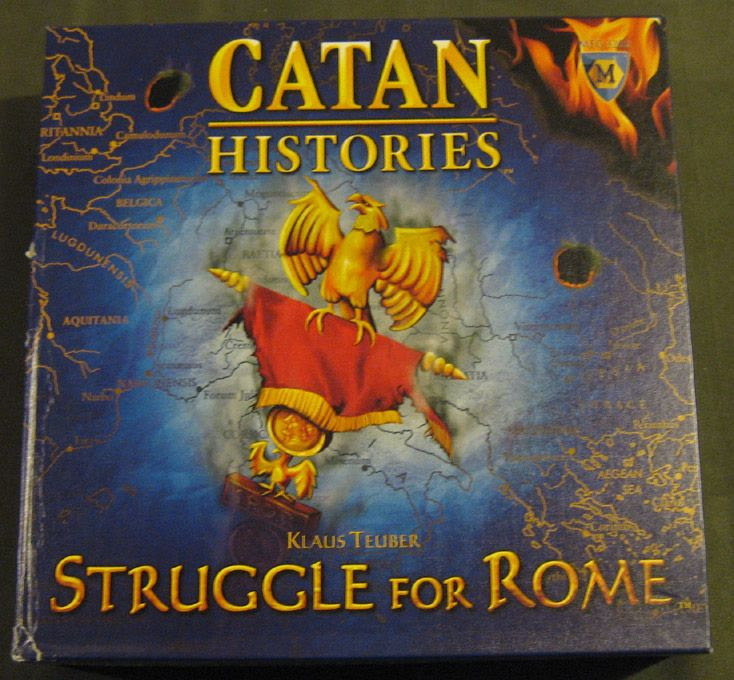 We all thought this was far better than regular Settlers, where people get out in front really fast and stay there.  The rolls of the dice are minimized, in fact.  I loved that!  The map is very interesting, and there are many many more paths to victory than standard Settlers.  This is a definite win, and something we would love to have! 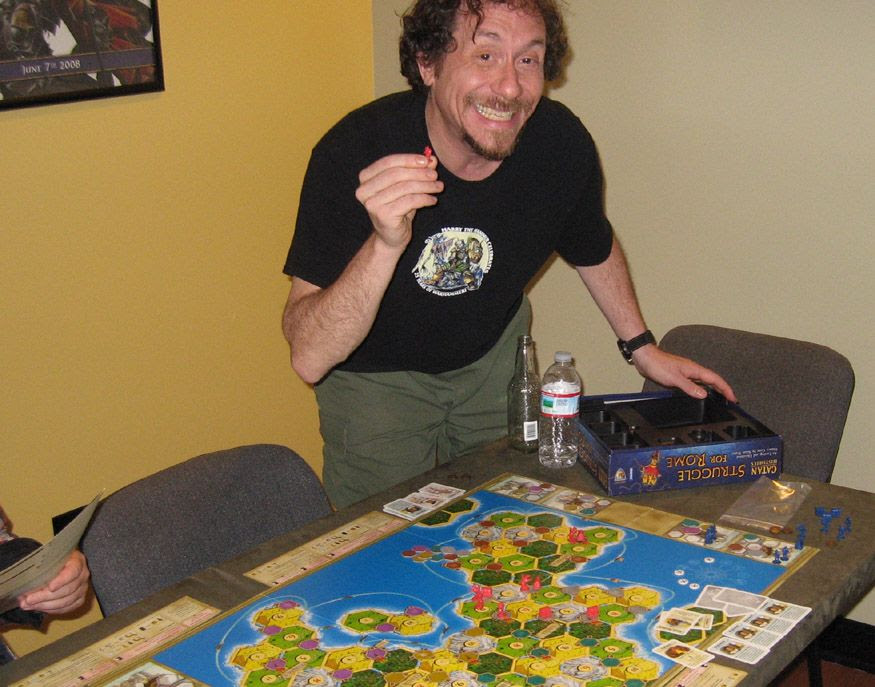 While we were doing that, the Malifaux guys were getting more comfortable using the new terrain board: 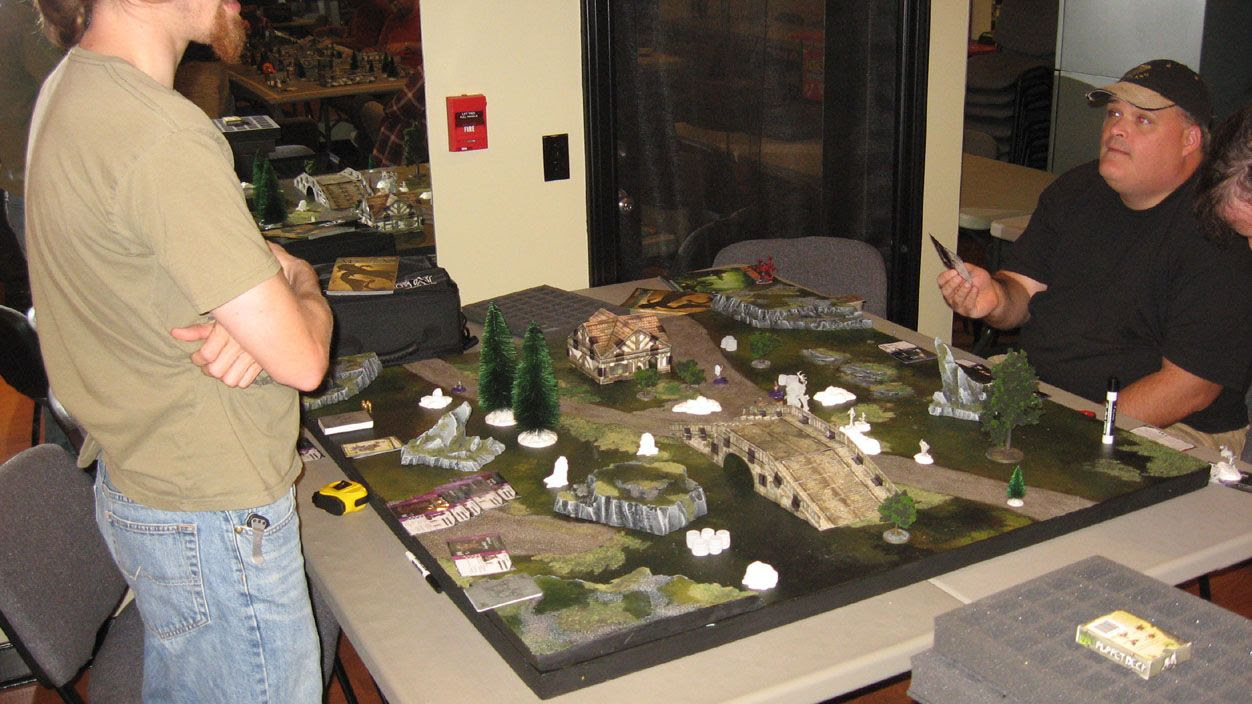 All in all, a very interesting day!  I am looking forward to getting the new eagle from CoolMini, which will be used as my Gwaihir! 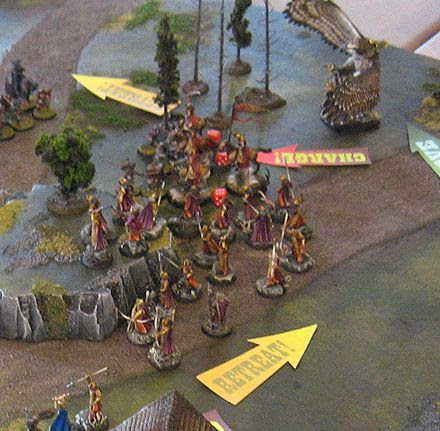 Today was the big test for Big bird!  This time around, Gwaihir joined the Knights of the Blood Rose to do battle with the Mouth of Sauron and a bunch of Morannon Orcs.  In addition to the eagle, I added another knight with a banner (very key to not giving away automatic VP's!) and a whole bunch of shields to my spearmen.

So, this was my force, with the usual 2 stormcallers.  No Army of the Dead. And Rich's Orcs, with some spiders, warg riders, and a Troll: 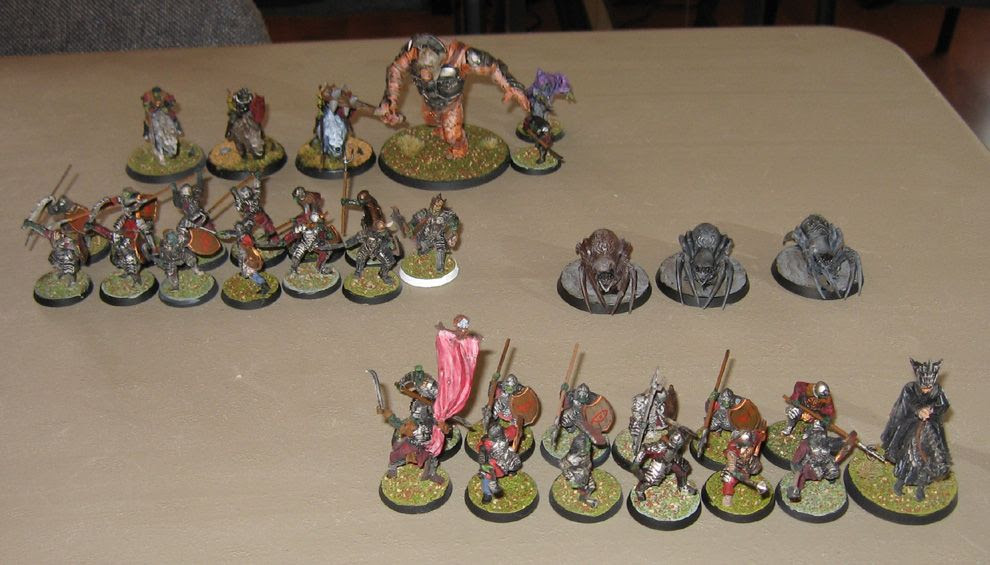 Here we have our deployment, which was not terribly spectacular.  With this scenario, all it takes is the fist unit to roll less than a 4 to force you to support those early drops with additional warbands. 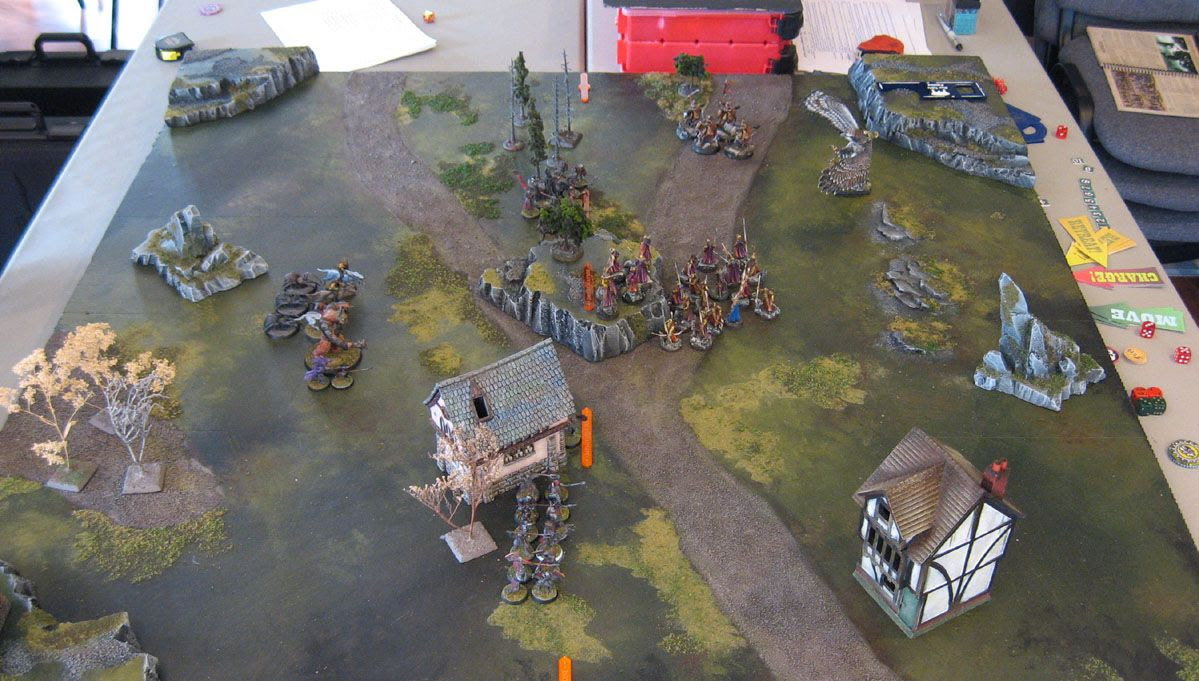 I ended up just behind the central hill.  This time, I wanted to use the heavily boosted cavalry unit along with the bird to inflict massive damage, instead of being a harassment unit as it had been previously. 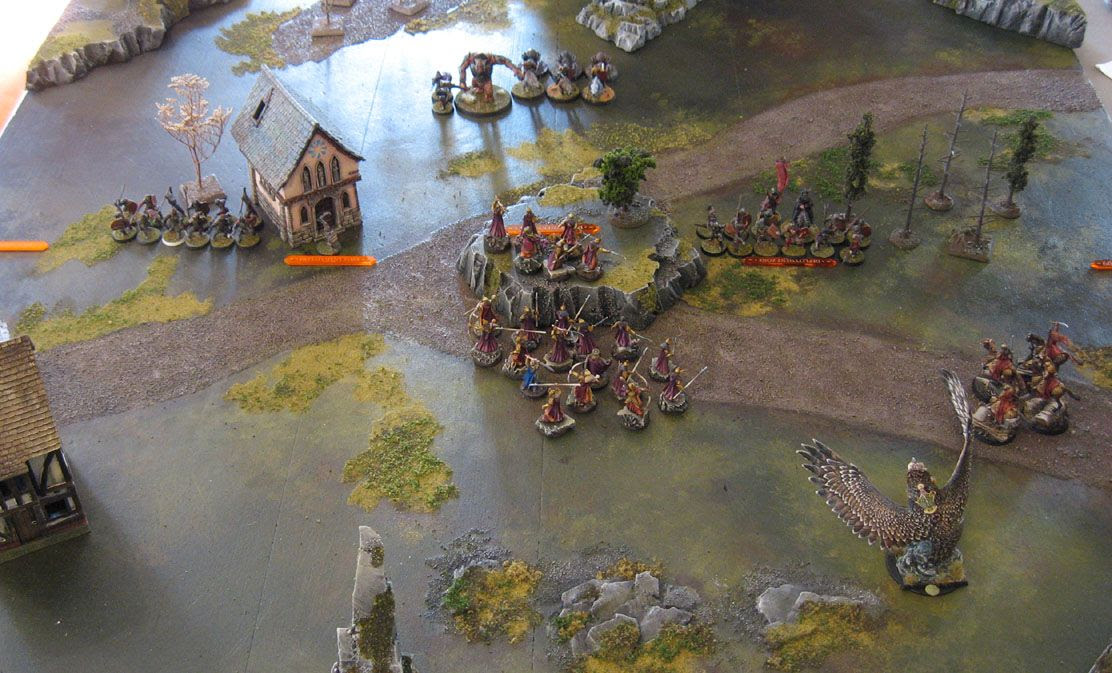 The orcs, with the Mouth of Sauron, moved most of their numbers back, leaving a few behind.  His big orc unit on the other side of the board got into position to head towards the central hill.  The troll stayed in place to toss a rock (which missed) and the spiders/wargs moved to join the Mouth of Sauron. 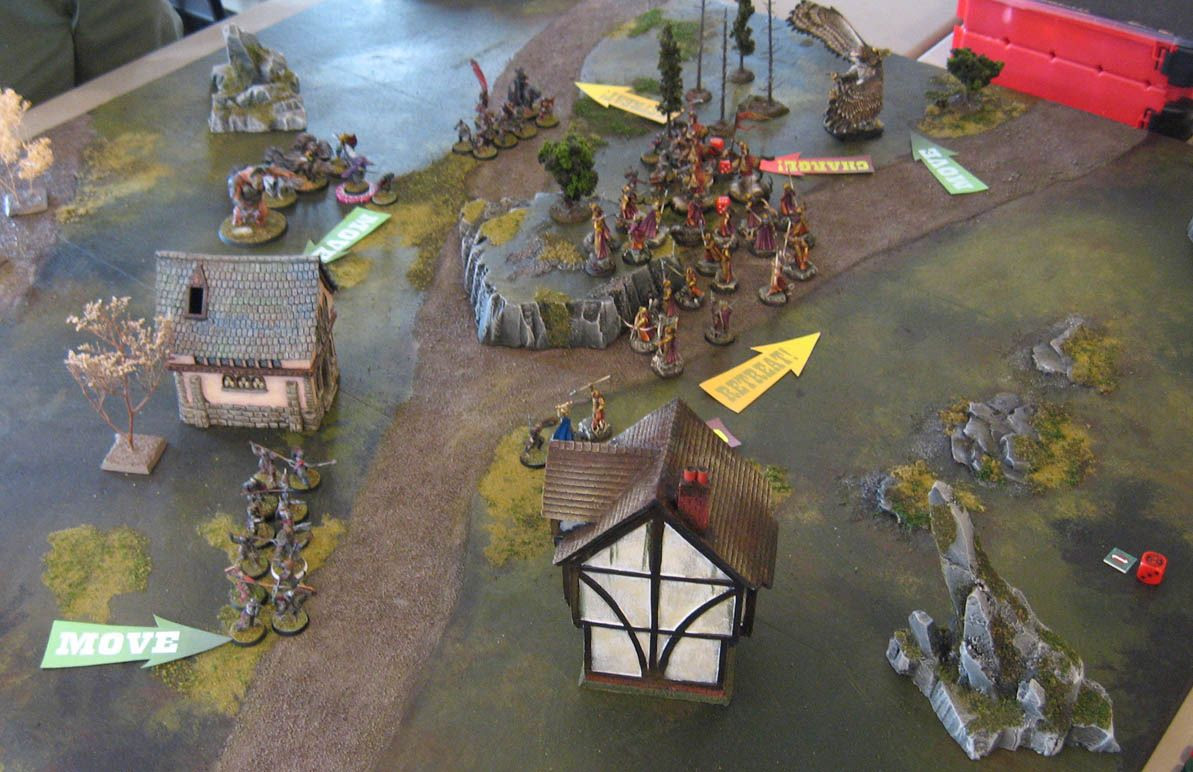 I killed off the few orcs left behind, and the lady stormcaller managed to get off her Nature's Wrath spell with a '6' getting back all the will. 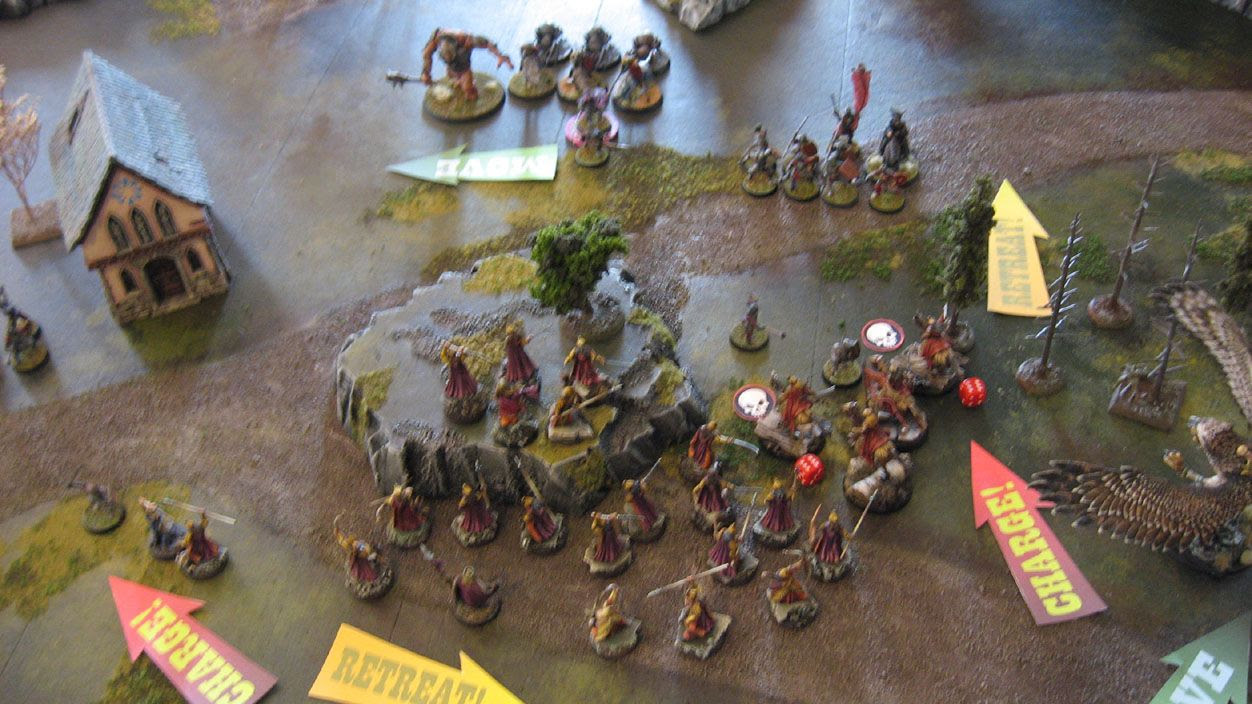 This was the crucial turn of the game.  I managed to get priority (didn't have it very often this game), and did a key charge with the eagle, hitting the Mouth of Sauron.  I didn't want him draining the will of the Stormcallers, so I thought I could neutralize his magic.  Plus, killing him would get me 3 VP's!  This would be a big challenge for Big Bird! 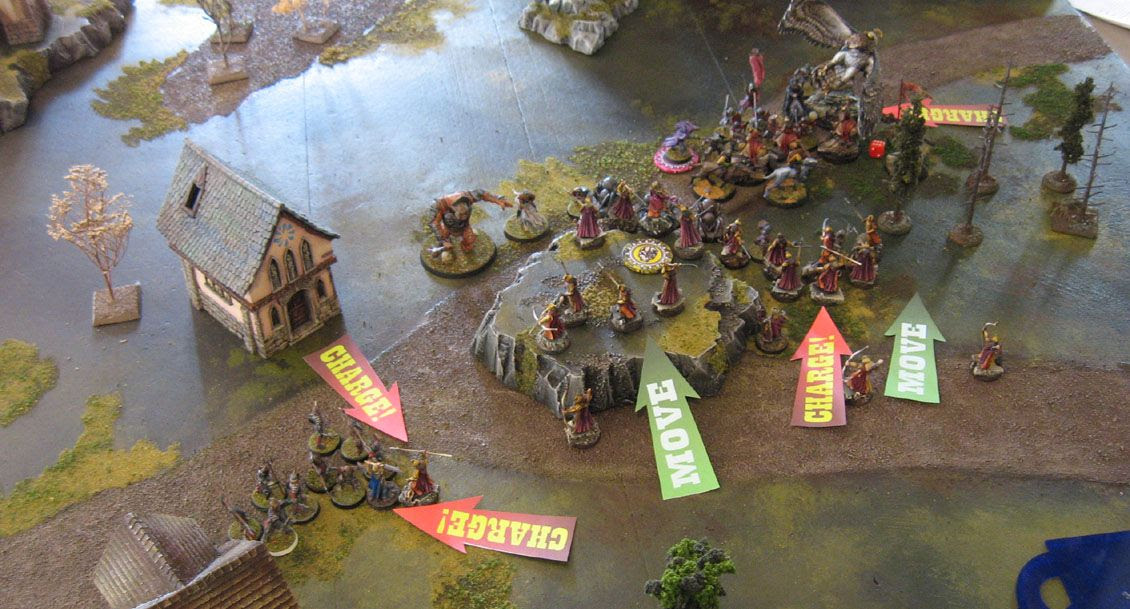 I was able to get one more Nature's wrath, while the other caster failed.  My higher fight skill really made the difference in almost every combat, as the elves managed to survive being outnumbered in most fights.  They even got some kills in this round... 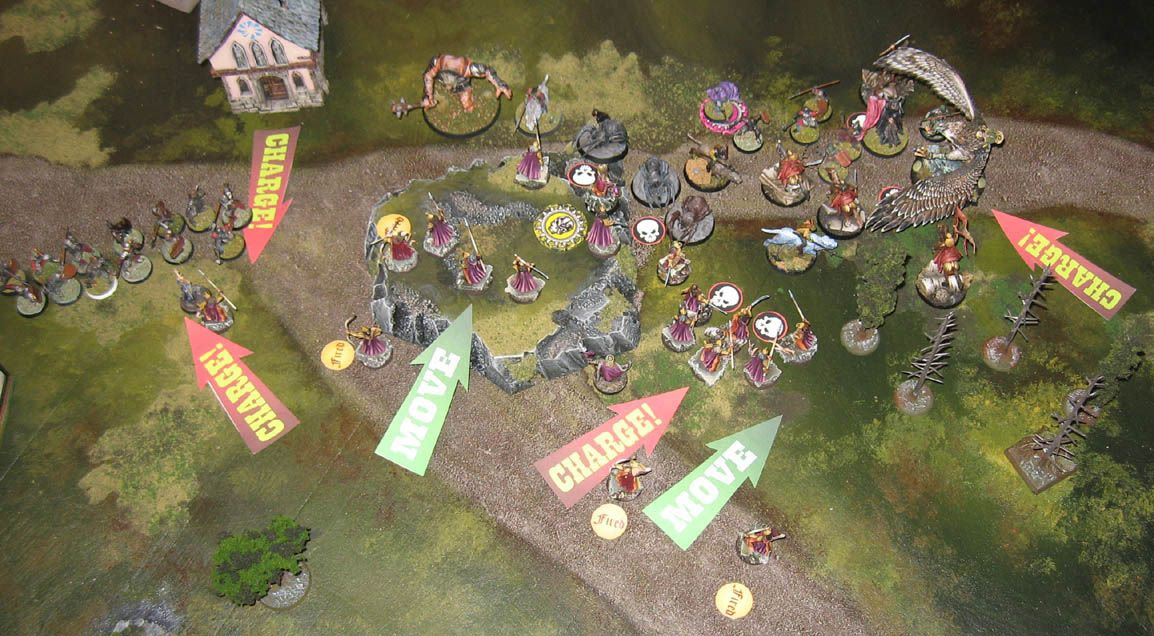 You can see how the Wrath spell affected the combats by all the upside down spiders!  Two wargs were knocked down, which let me kill the riders (wargs then ran away).  So, all of the orc cavalry was wiped out pretty early, giving me a major advantage in movement.  The eagle and the elf cavalry all move 12, and that is huge in a close up scrum like this scenario. 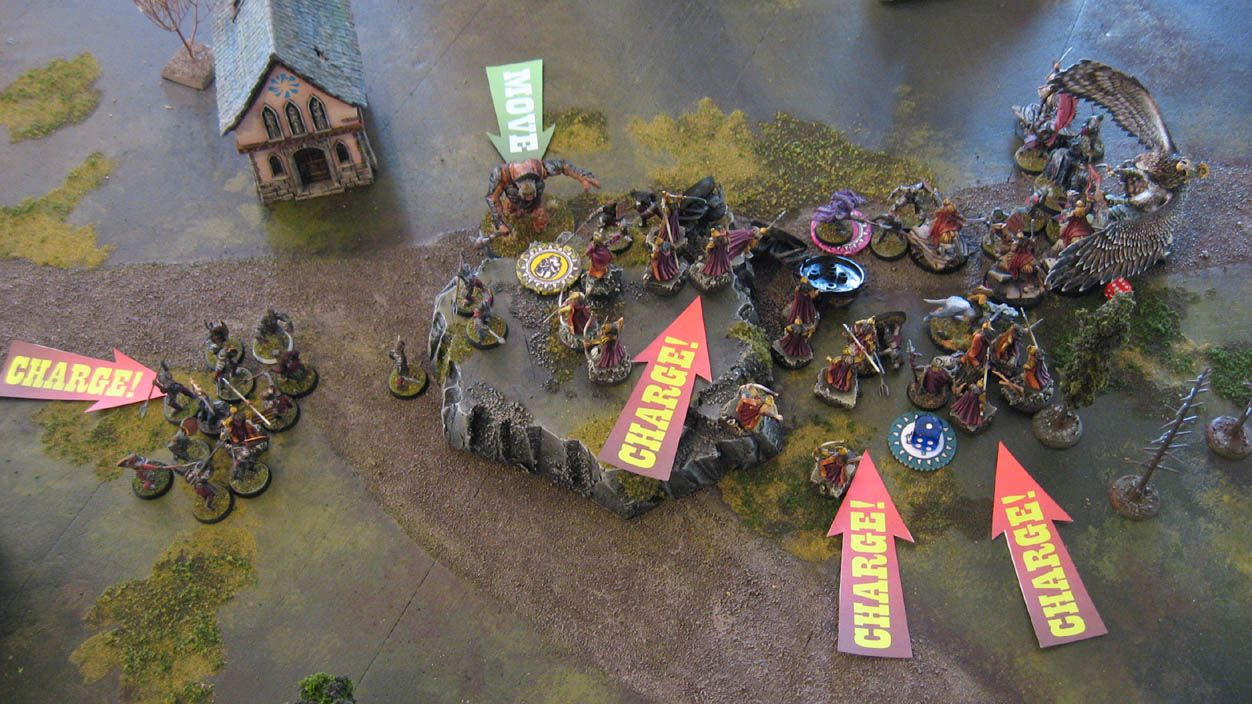 The game was beginning to favor the elves once Gwaihir killed the Mouth of Sauron!  The right flank of the elves had crushed the orcs, and it was creating a numbers advantage for them.  The orcs were nearing their break point, but could this work n their favor?  You can see the remaining orc unit moving towards the hill along with the troll.  Would they get enough bodies on that hill when the game suddenly ended? 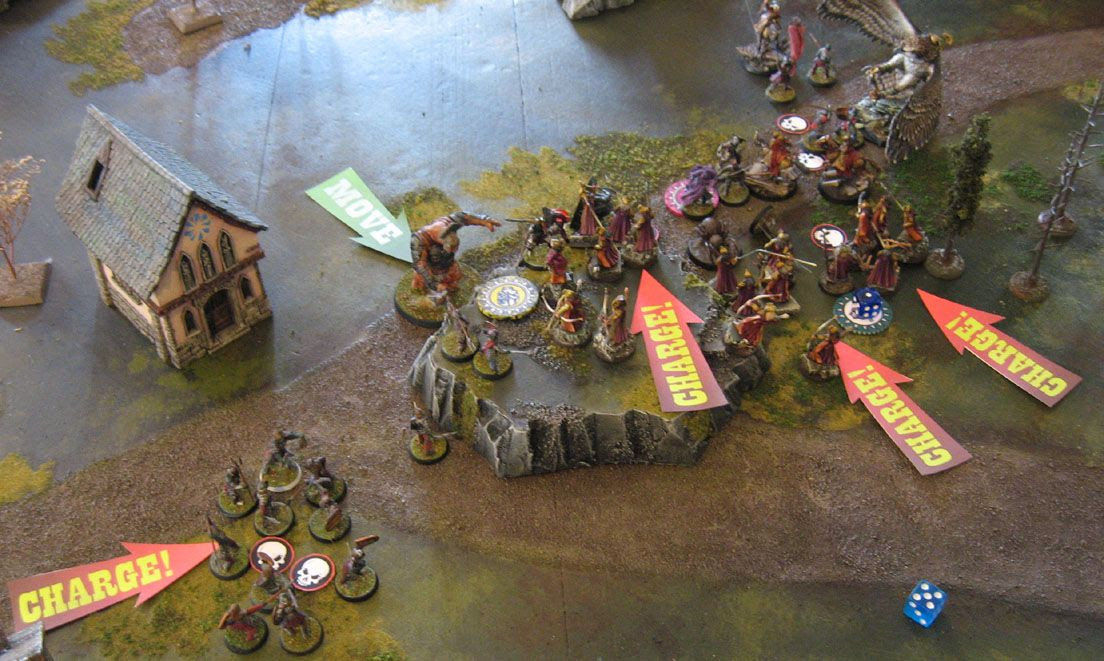 Stay tuned for tomorrow's exciting episode!  We find out if the elves can get back to the hill in time to add to their point total and kill more orcs!!!
Posted by wappellious at 3:46 AM No comments: